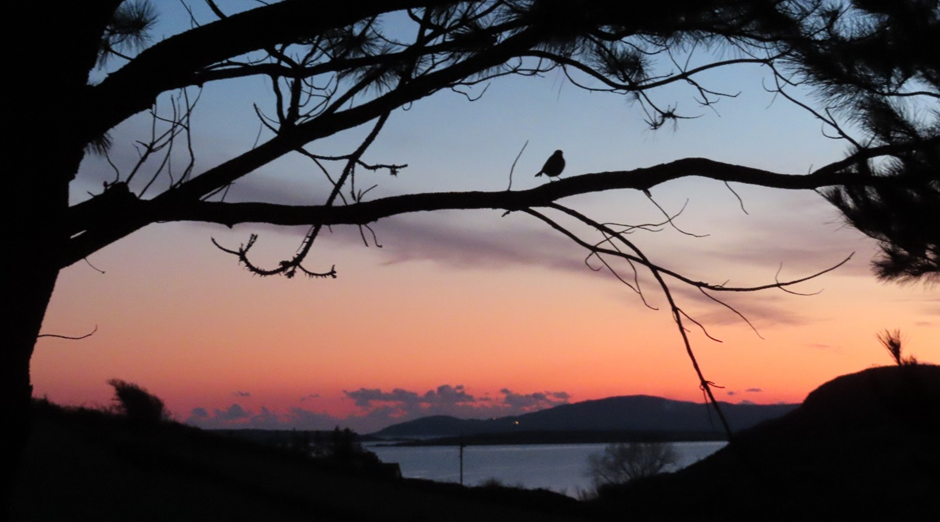 The long cold spell has disappeared to be replaced by thick fog and pouring rain. Walking the dogs now requires that I identify when there will be a break in the downpours. So far, I have not been very good at this as the rain usually takes us by surprise just as we reach the furthest point from home. Sadie my little collie takes exception to this. Unfortunately, her response is to dig her heels in and refuse to budge. I have not been able to make her understand that we need to get home to get dry. 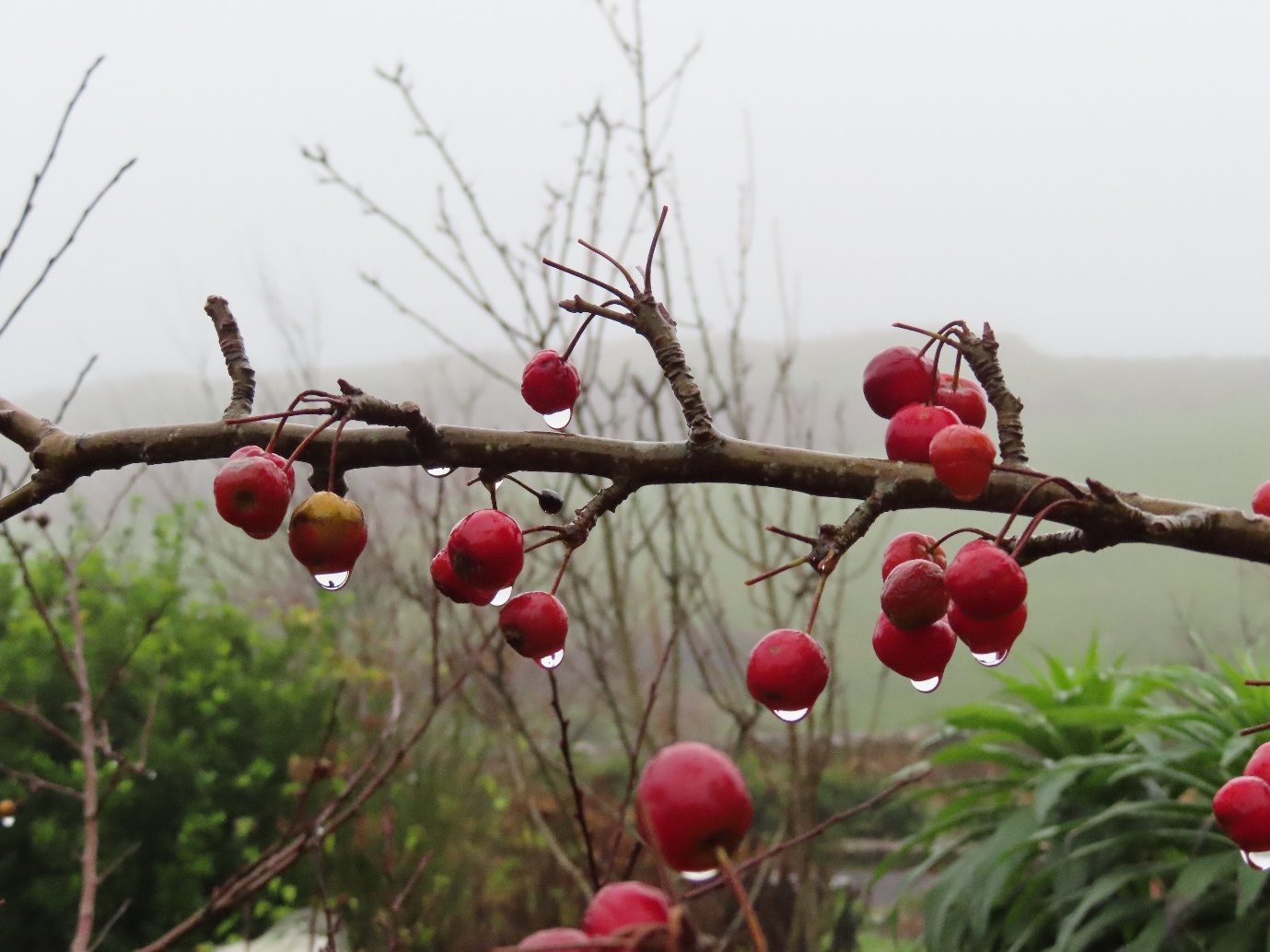 Black and brown is the predominant colour in the garden. However, there are still some bursts of colour in the garden proper like the crab apples above. My Camellia Reticulata Inspiration is in full bloom. It is suffering from the heavy frosts and the flowers are not lasting as long as usual. I hope that this does not affect its flowering period as it often has buds in late April. It is hard to believe that the leptospermum and ceanothus were in bloom in January last year and the contrast in the weather could not be more marked. 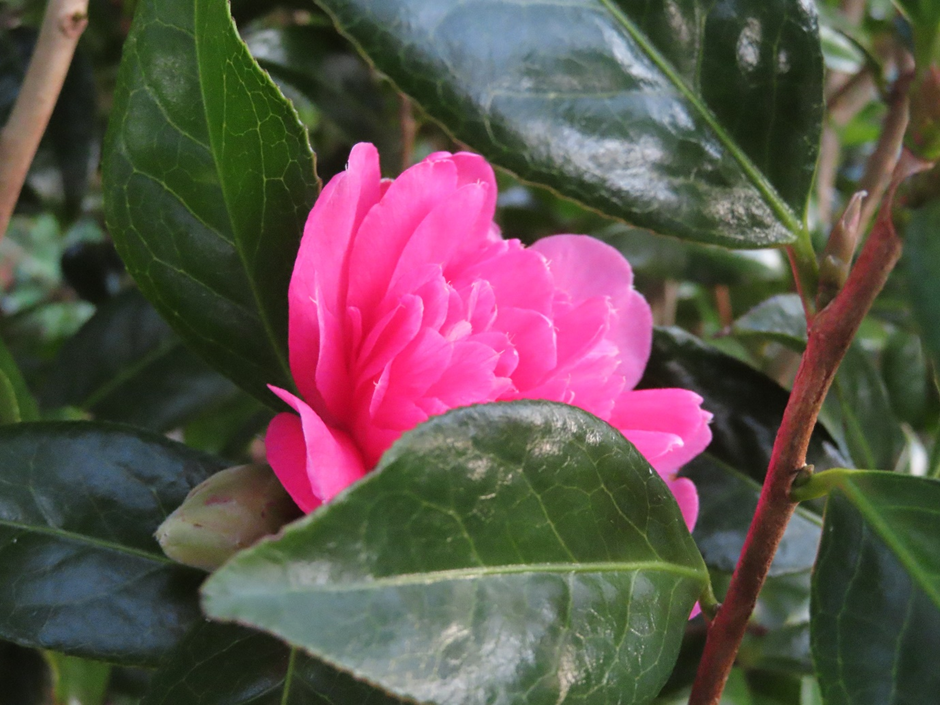 With many of the trees and shrubs bare for the winter I have been passing the time by taking the opportunity to seek out the small gems in the garden. Most of these have not been planted by me but are created by nature itself. 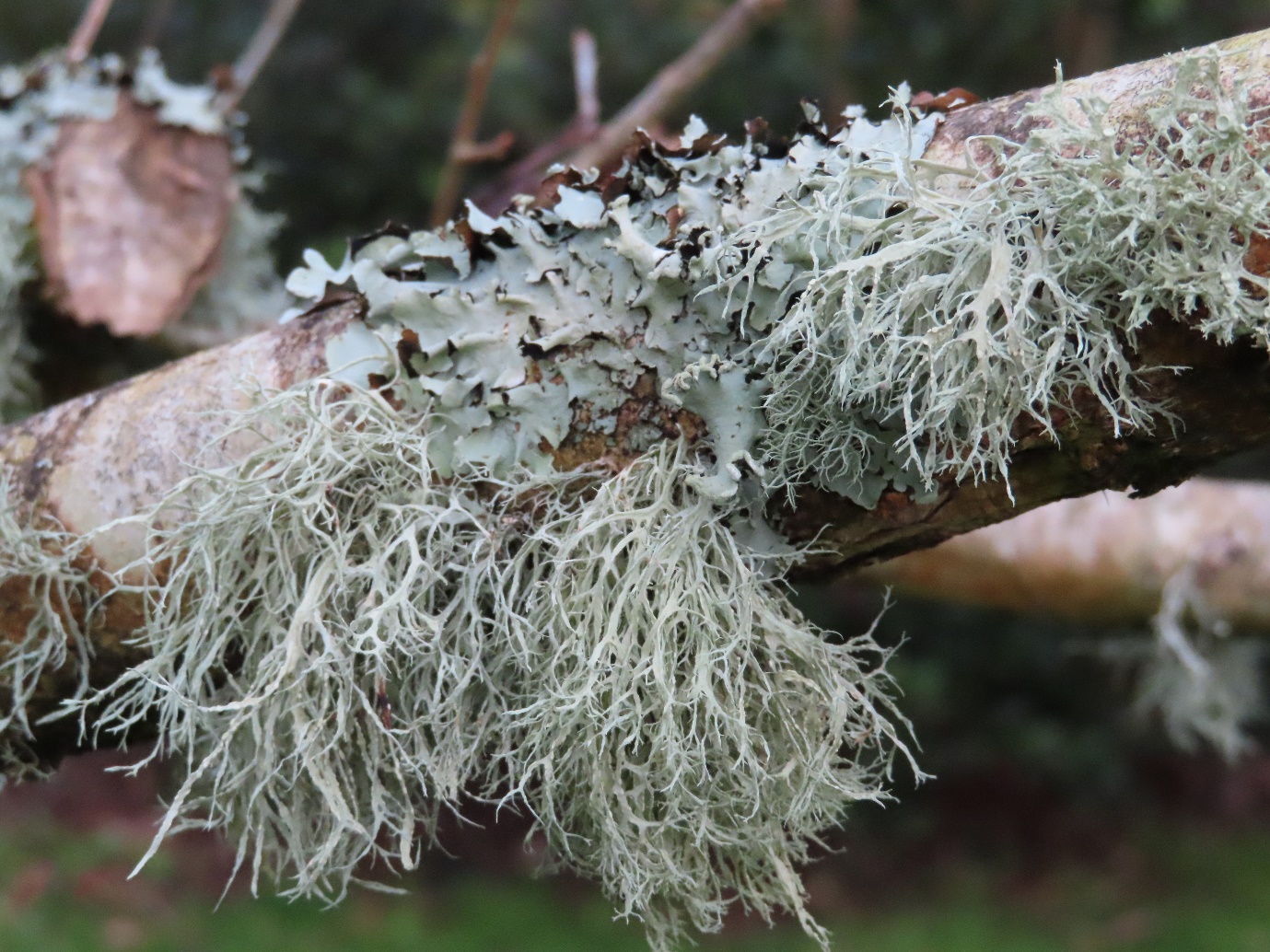 The fluffy growth of the lichen above is a member of the Ramalina family and is widespread on the small trees in my copse. It vanishes as soon as it is blown to the ground and I am sure that the birds take it for their nests. Its companion is a member of the Parmotema family and the two species usually grow together on the branches of trees here. They are made up of two organisms – fungi and algae – which have a symbiotic relationship one requiring food and the other shelter. It is good to know that lichens are not parasitic and do not damage the host trees as I think that they give my copse a mature, dignified look. Even better they are a sign of clean air and are not found in atmospheres that contain ozone, sulphur dioxide or acid rain. 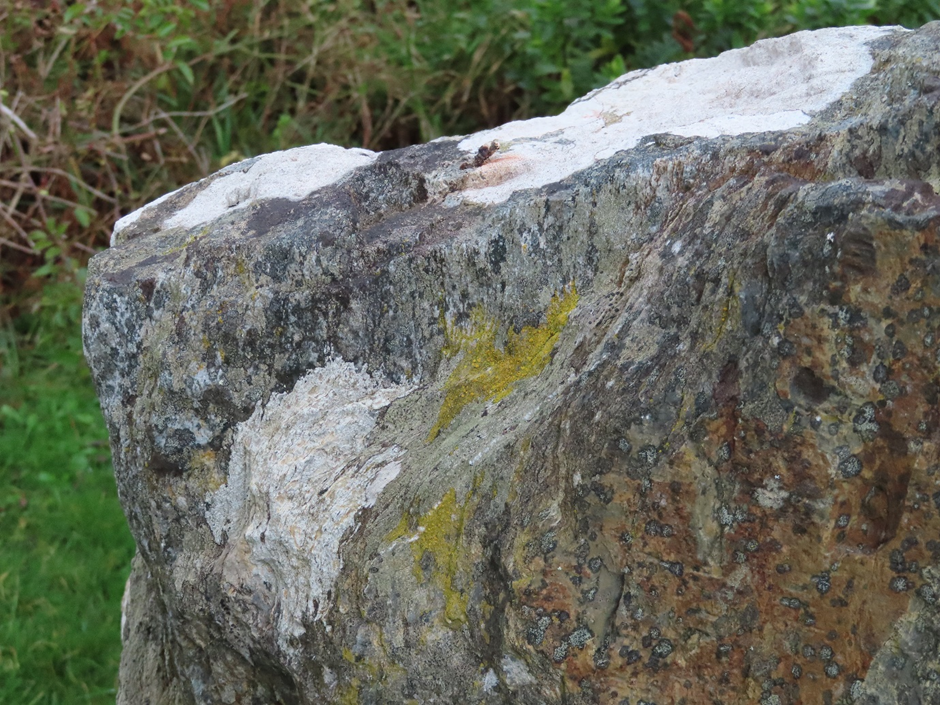 There are too many lichen and algae to identify easily but I do like the effect of them on the stones in the garden walls and elsewhere. Apparently white and orange coloured lichen are usually the first organisms to grow on recently exposed rock and have a long life-span. The ‘standing stone’ in my garden above is gradually changing colour and is now much more dramatic looking than when it was first installed. 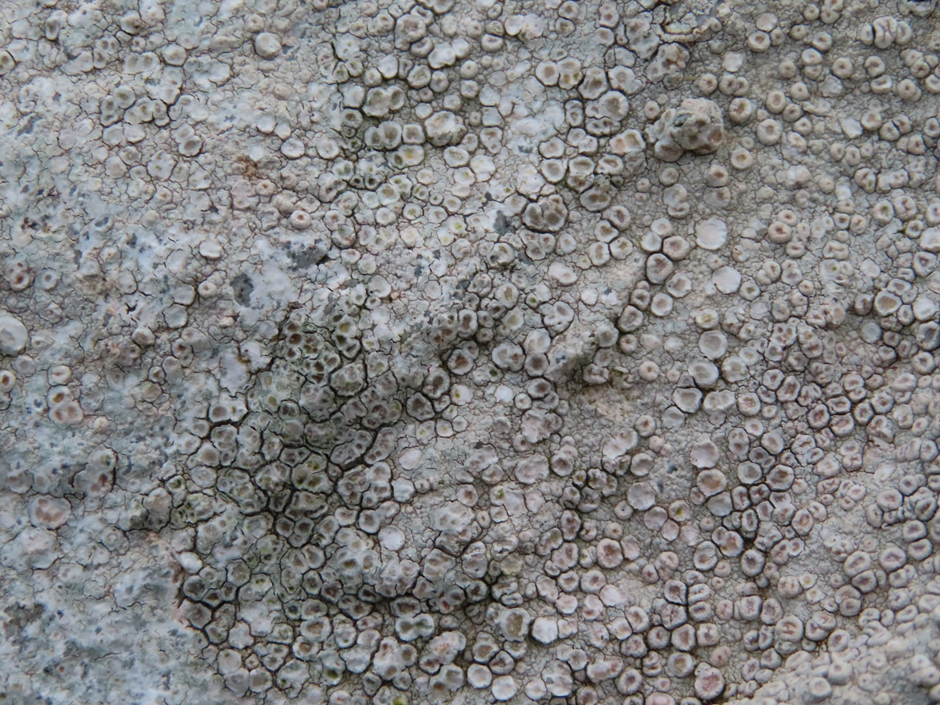 Details from the ‘standing stone’

Rust-covered algae usually grow on rough textured tree trunks as the groves trap rain which provides a suitable, damp habitat. They are often accompanied by lichen, as in the example below. These trees on my driveway are covered in this alga but on the north side of the trunks only. This may be because there is some shelter from the salt that blows in from the south when the wind is in that direction. 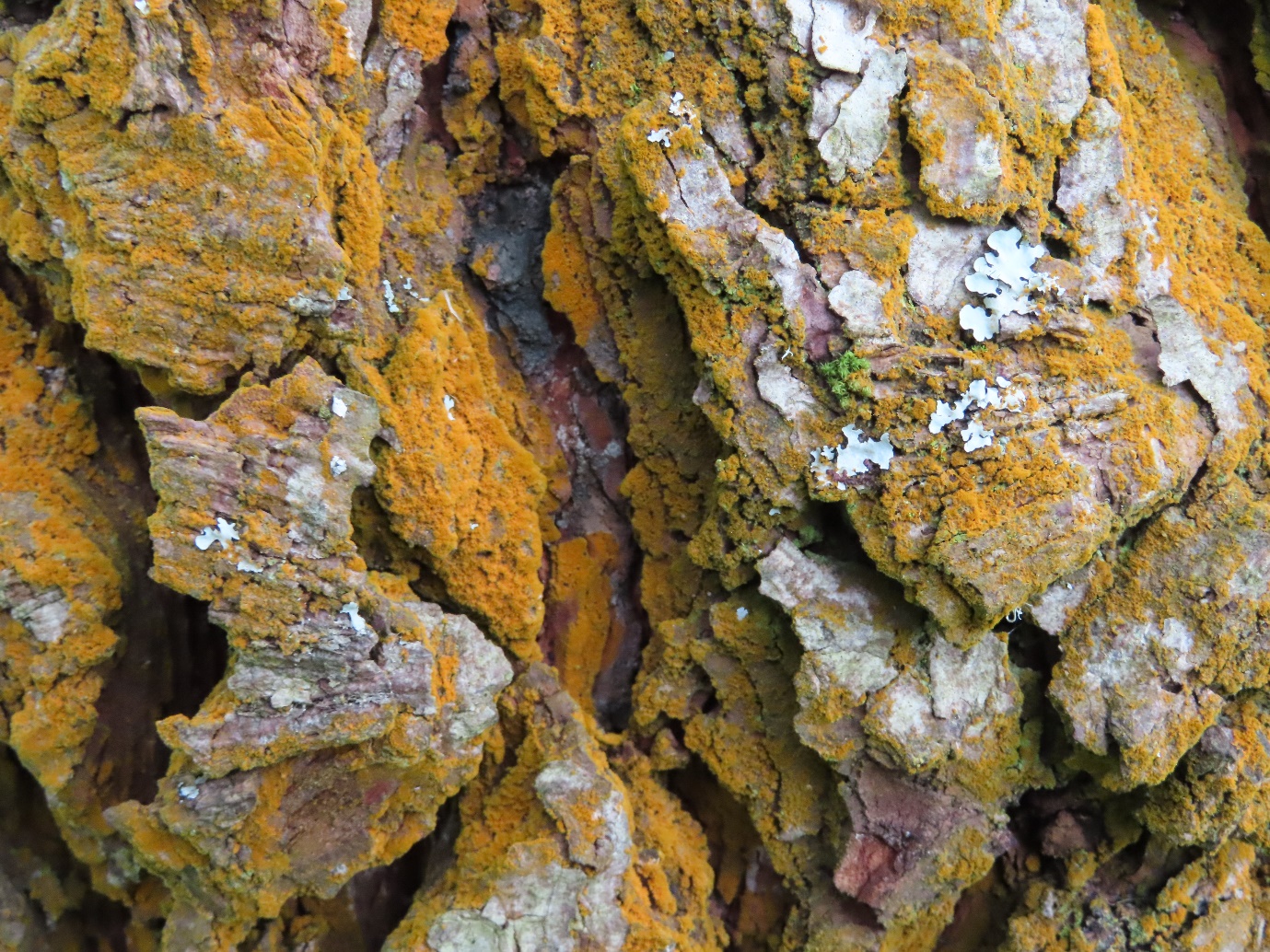 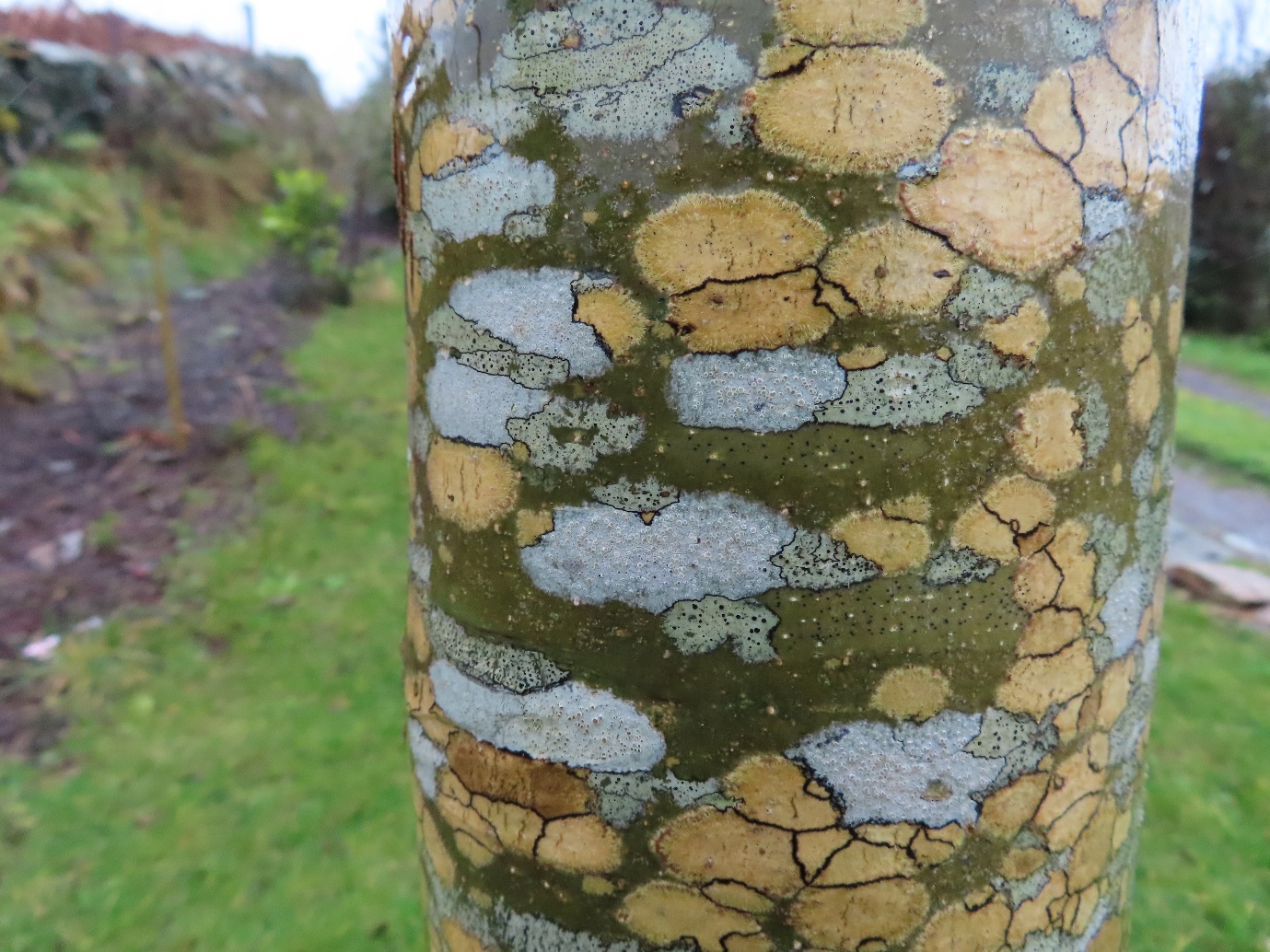 This above photograph is of an ash tree at the bottom of my driveway. When I first saw it, I thought that the previous owner had planted a stand of exotic trees. In fact, it is covered in tree lichen to the extent that only a tiny bit of the original bark is in evidence. All the trees in this small section are in the same or a more advanced condition. This is in contrast to the matching stand of ash trees further up the drive which are almost untouched. Apparently, ash trees provide the ideal habitat for lichens and the British Lichen Society reports concerns that recent incidents of Chalara dieback will have an impact on their survival. So far, my ash trees are healthy and as the lichen provide unique patterns on each tree it is like having my own outdoor art gallery. 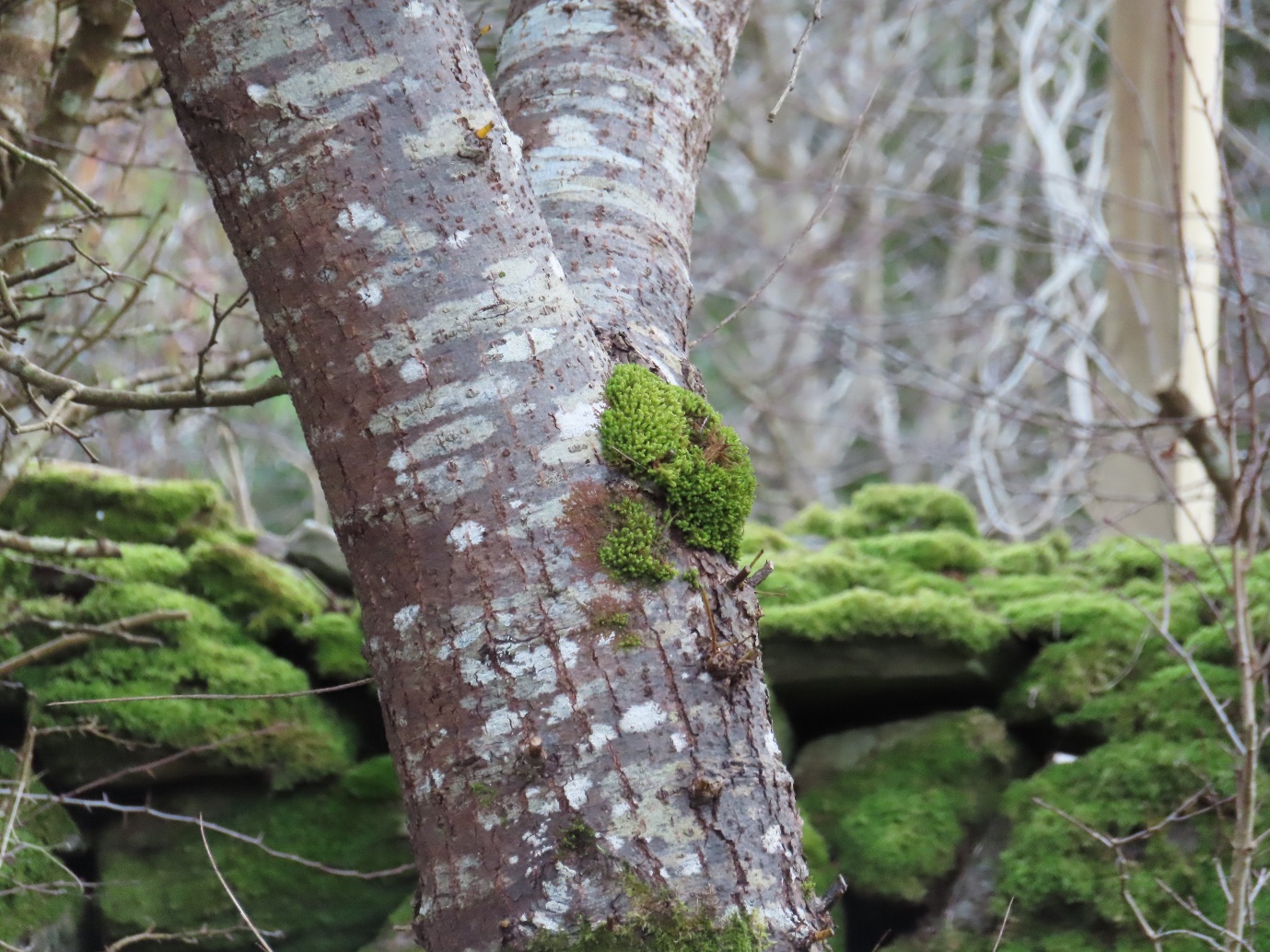 When I first started looking at mosses on the internet, I was struck at how many sites were dedicated to getting rid of them. I can understand that you would not want them on the stonework of your house but I think that the walls in the background of the photographs above and below are natural works of art and I can’t imagine ever wanting to get rid of them. 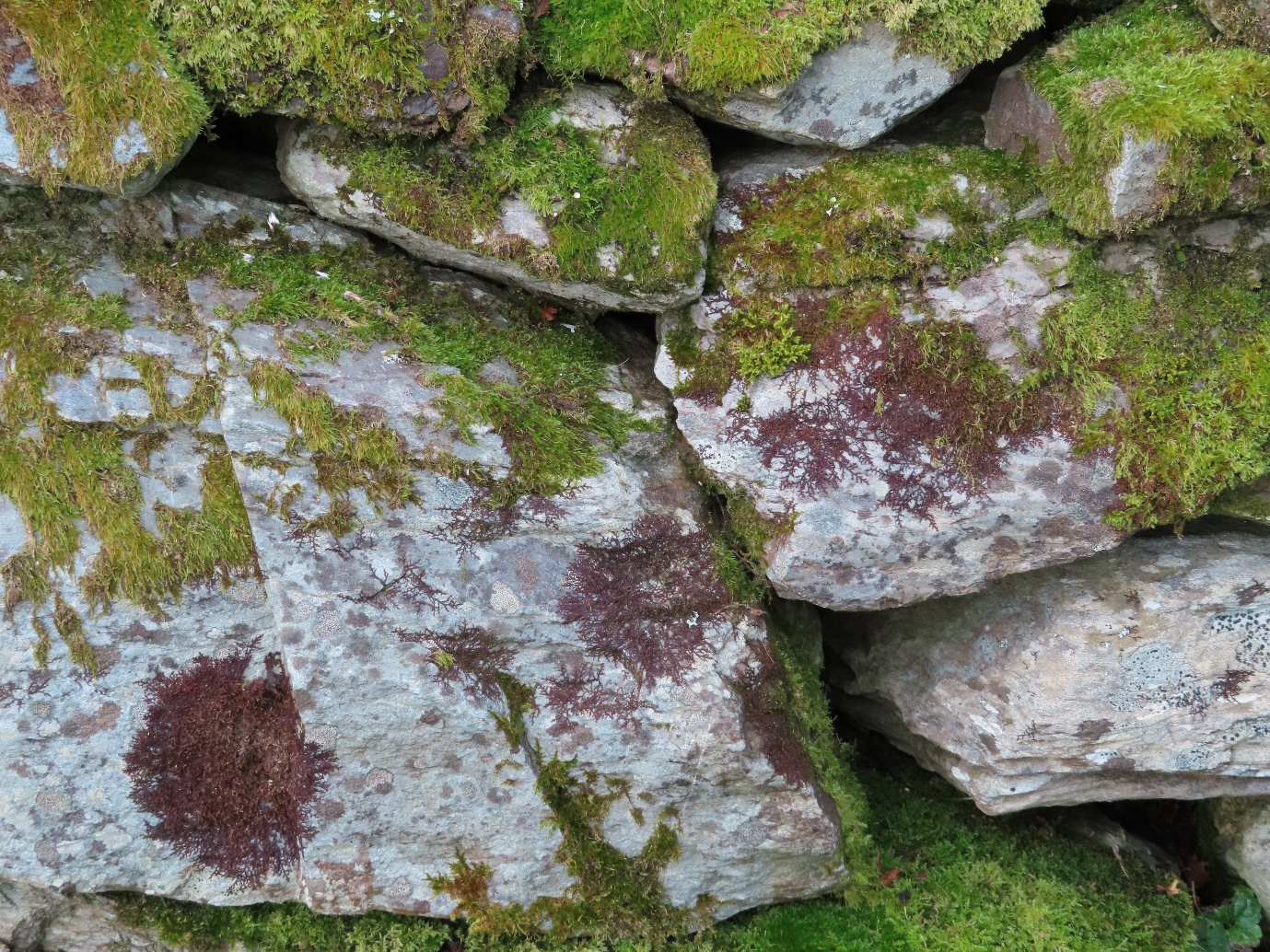 Mosses also help retain moisture and are usually found in the damper, shady parts of the garden. 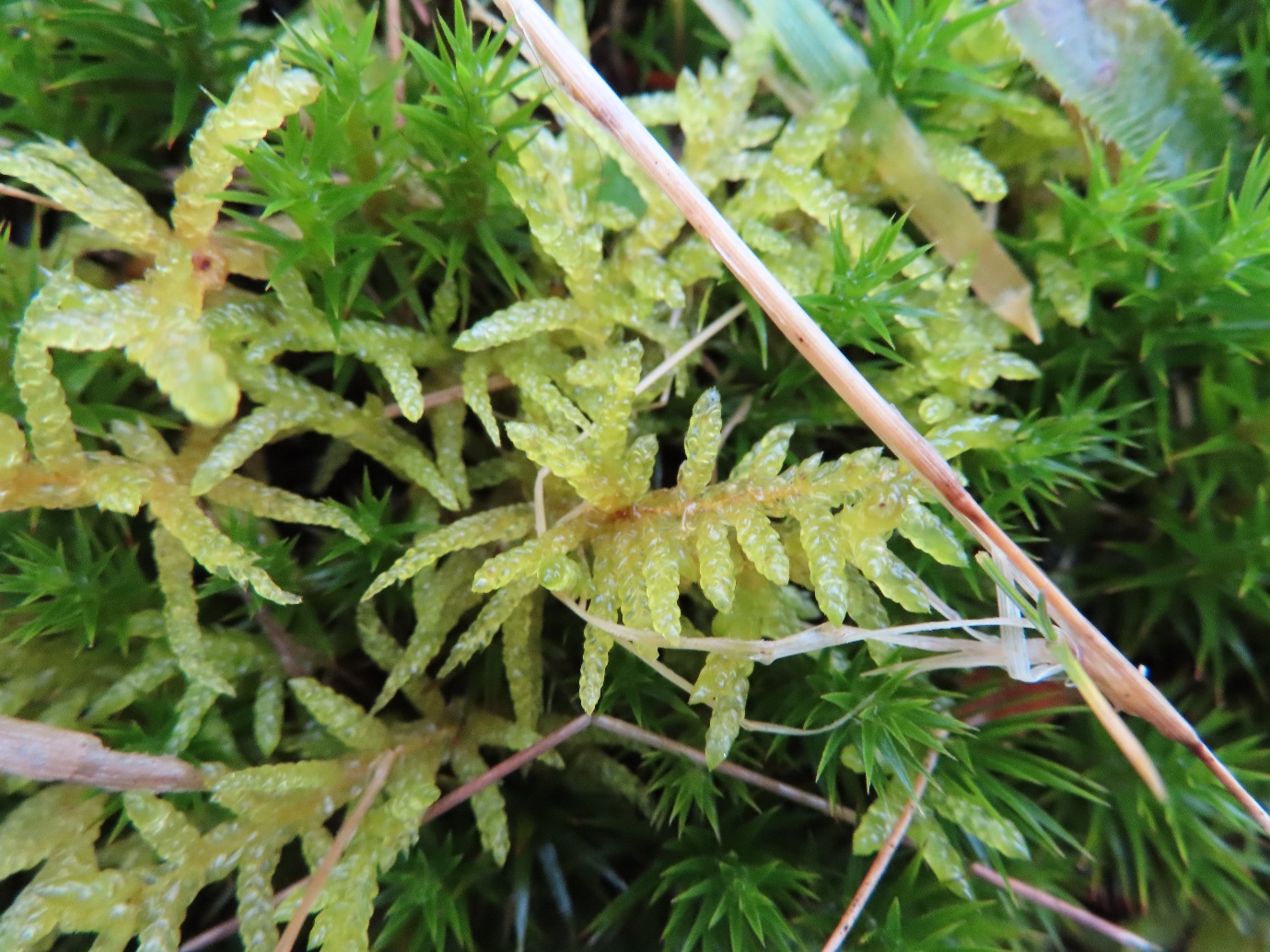 There are two mosses in this photograph. The Common Haircap is dark green and looks like a tiny pine tree It is not surprising that the light green companion is called the Common Tamarisk moss. 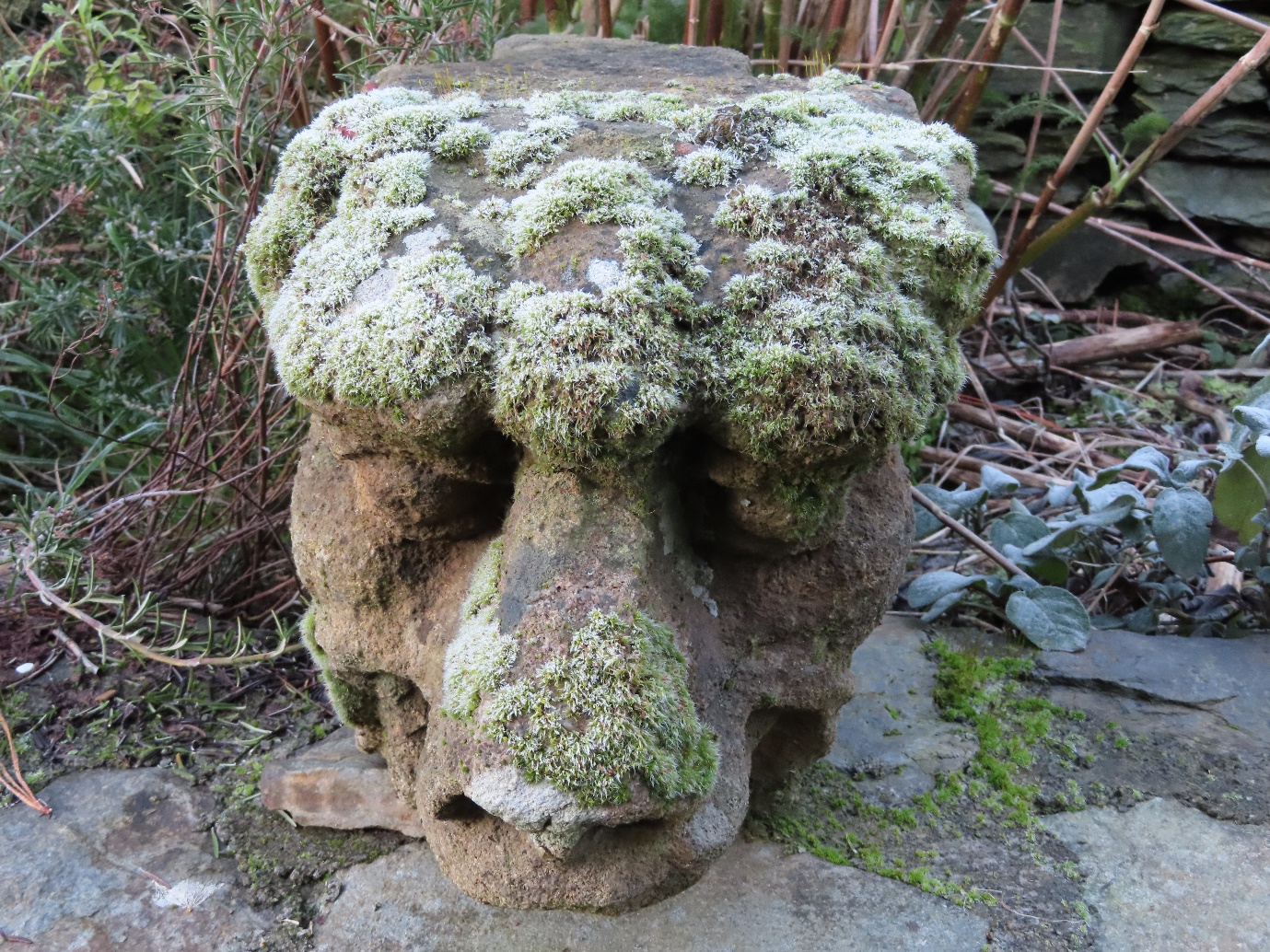 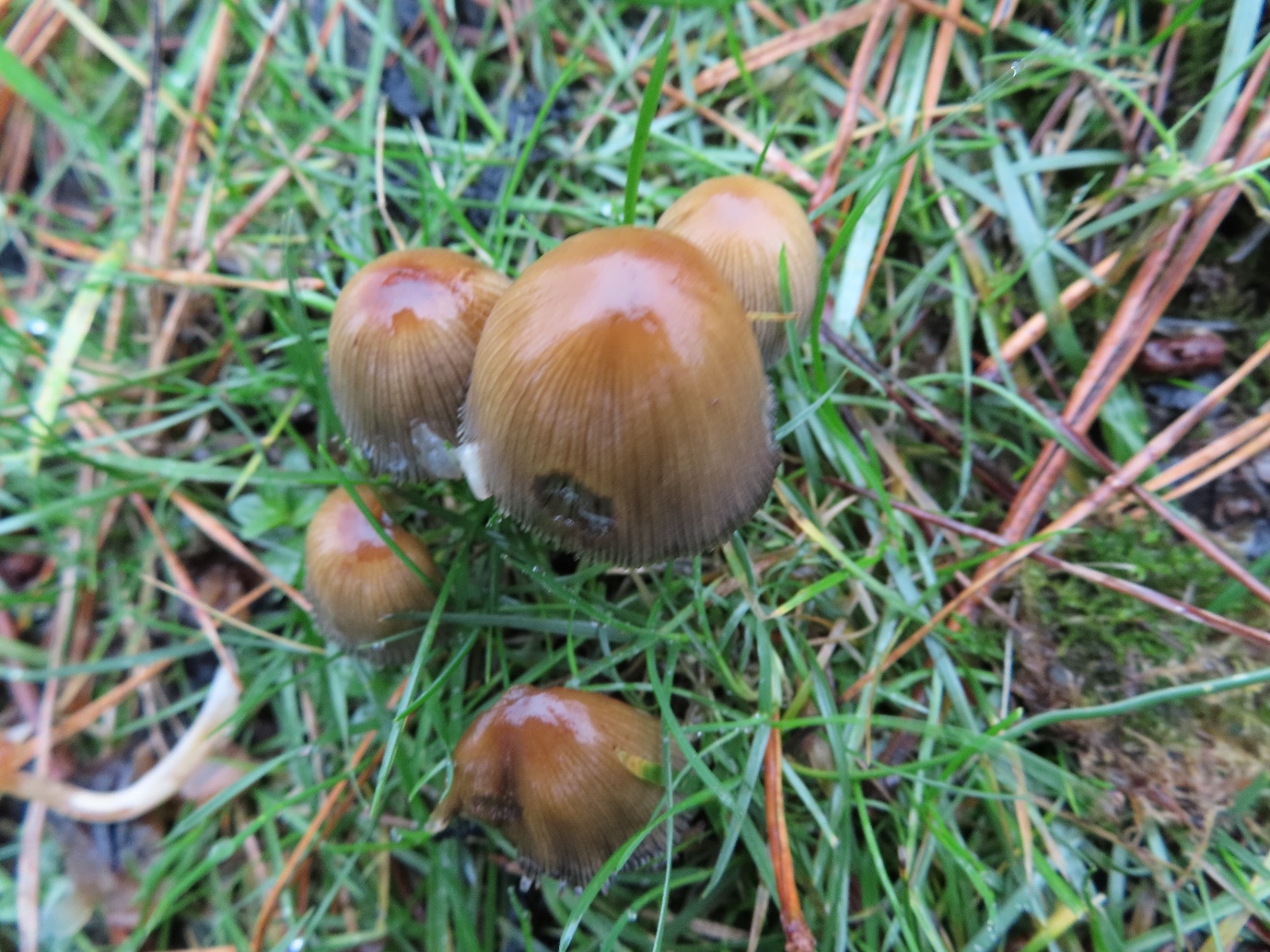 These Glistening Inkcaps appeared during the week of hard frosts and were a very pleasant surprise. This is the fourth crop since October. 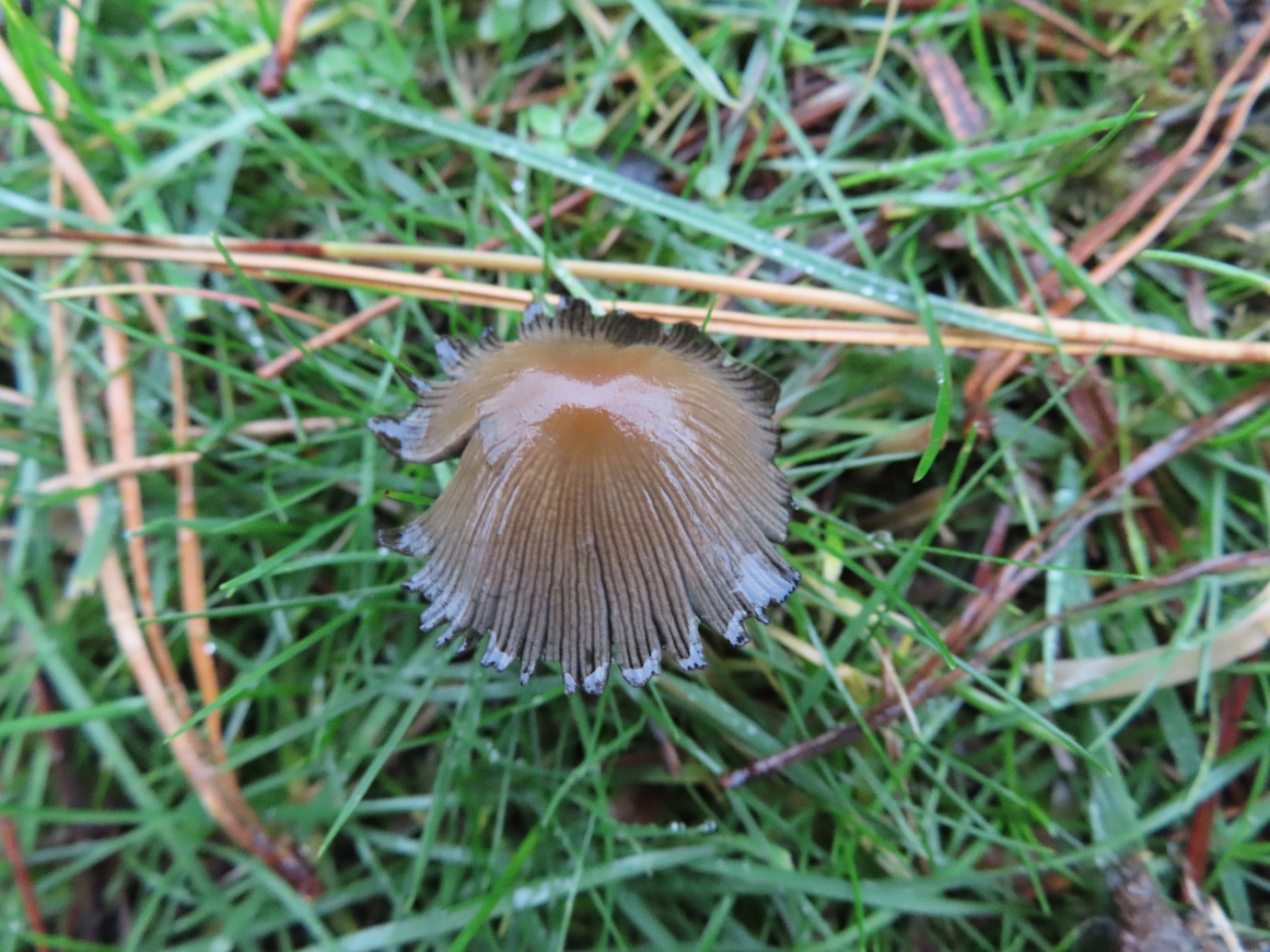 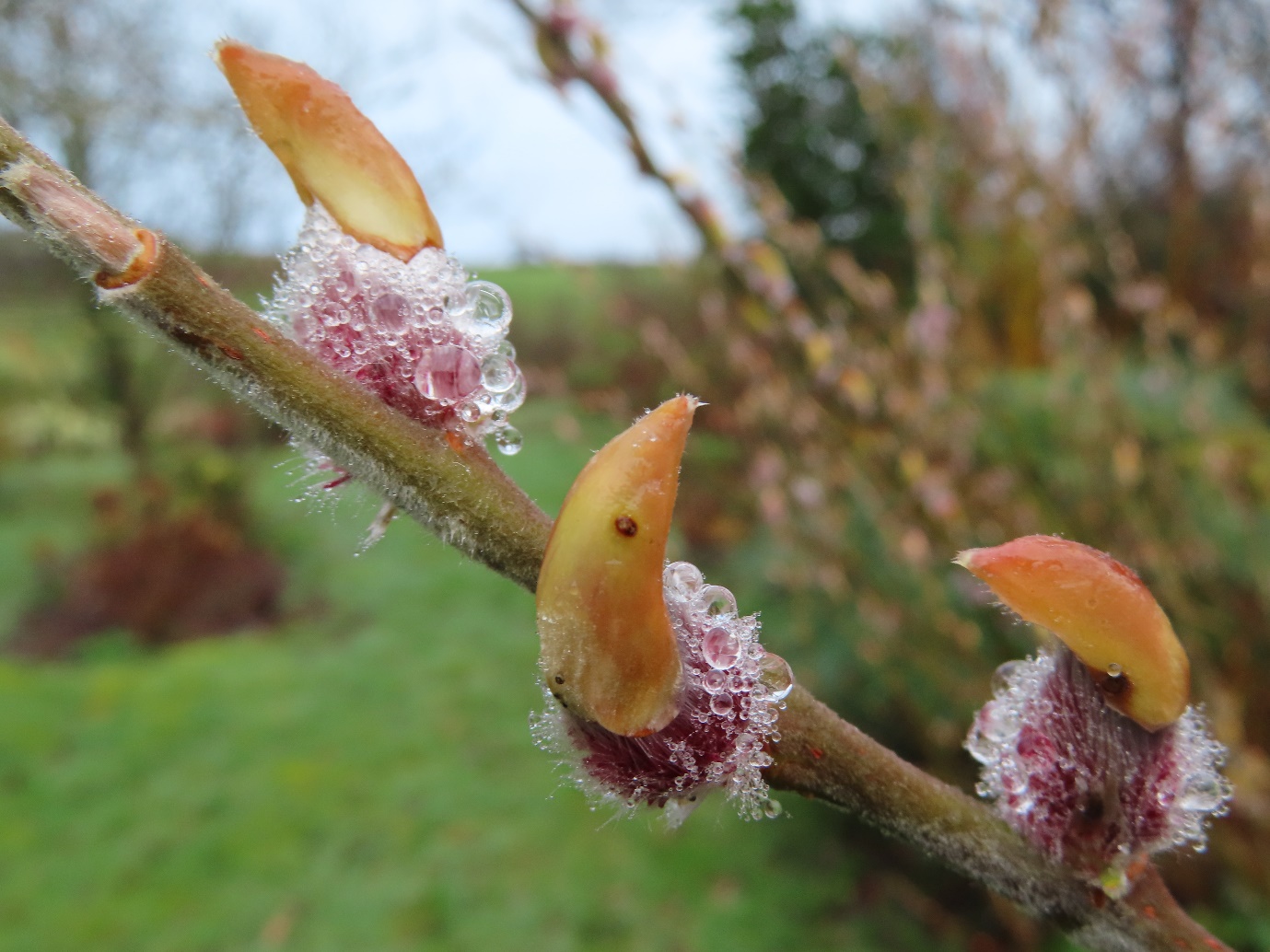 The wine pink catkins on the Salix Chaenomeloides Mount Aso have finally made their appearance. I always think that they look like a little elf and they are much appreciated as they bring a little colour to the garden. 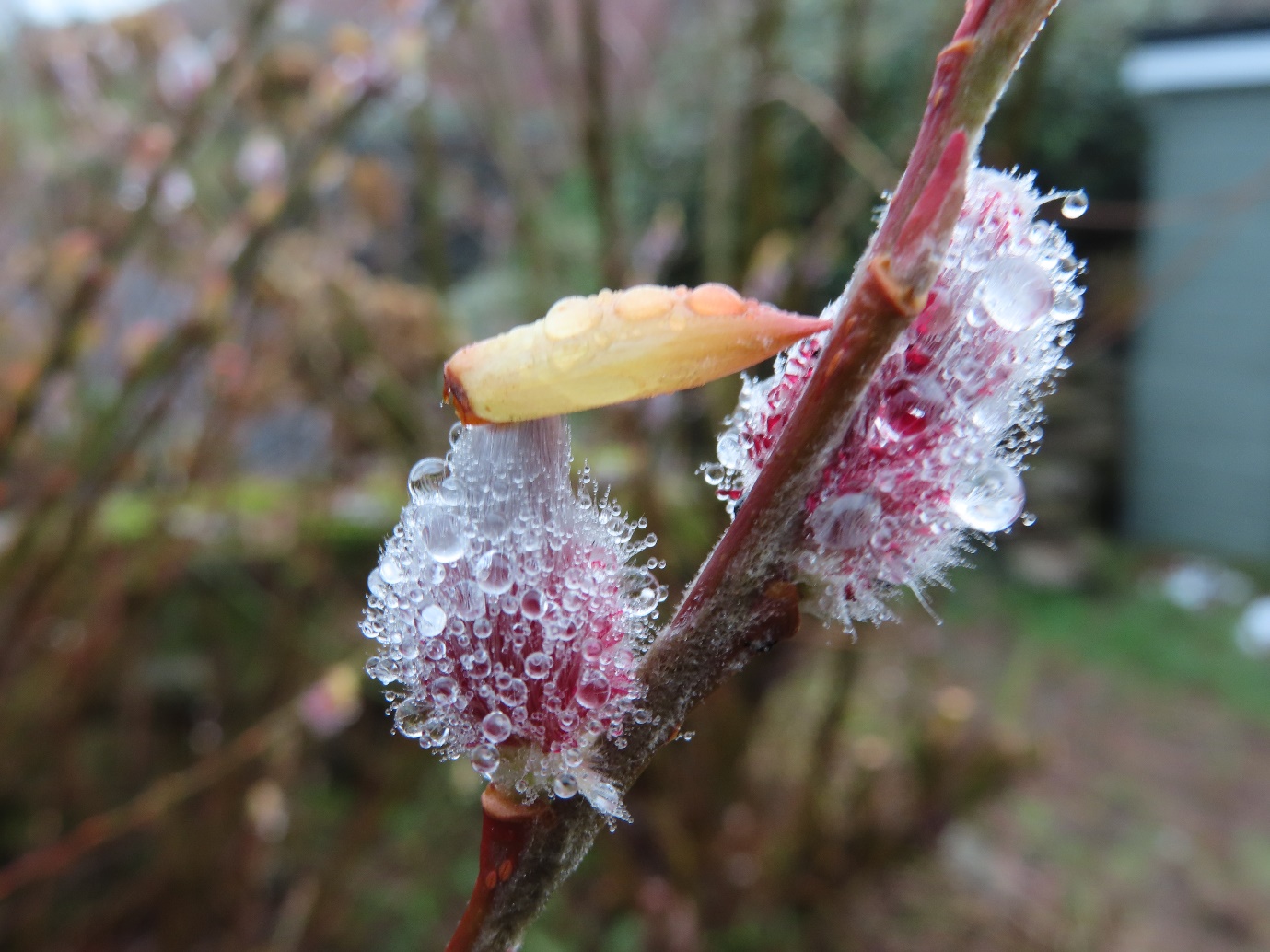 The combination of bad weather and lockdown due to Covid-19 has given me the opportunity to slow down and take stock of what is around me. It is also shaping my ideas as to what gardening should be. Given the natural beauty surrounding me sometimes in tiny forms it now seems imperative to retain all of these as I continue to develop the garden and expand into the field below.