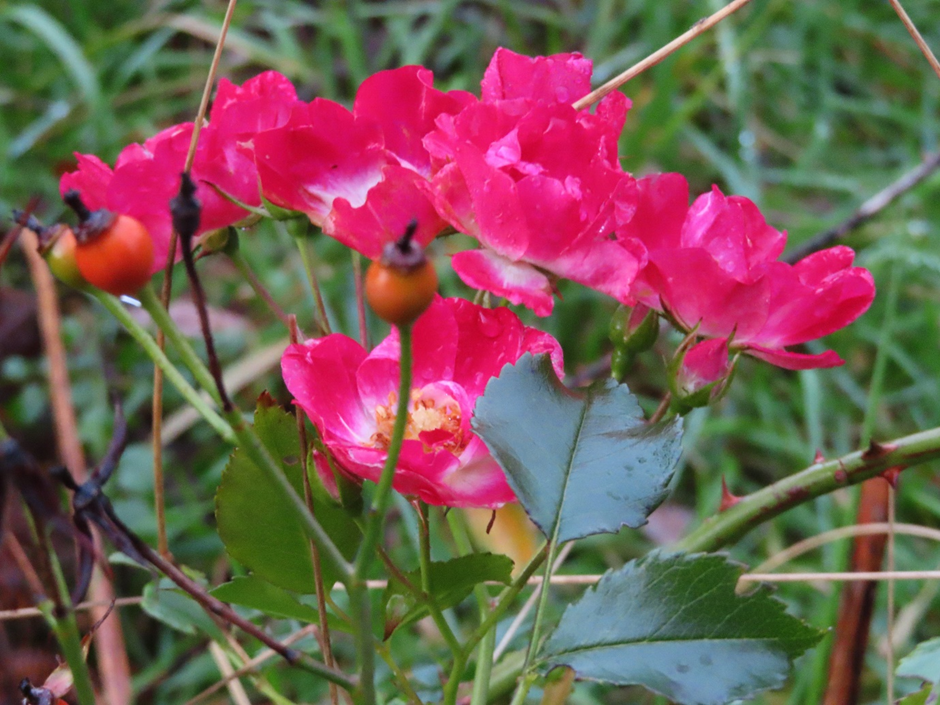 There are always surprises each winter when a few flowers appear out of season. These roses at the bottom of the drive are just some of the many blossoms that are popping up all over the garden. There is usually just one bunch per plant but it is enough to brighten up a dull day. 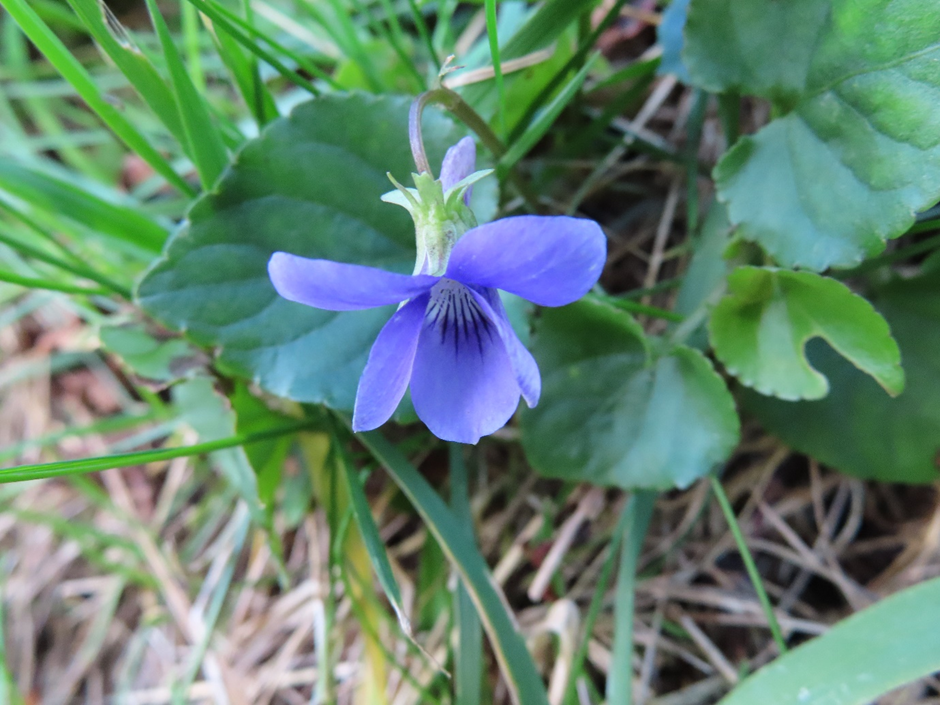 These dog violets are supposed to flower from March to May but have recently made an appearance on the bank behind the house. I watched them being battered by the recent storms but it has not stopped them from producing new flowers in the last few days. 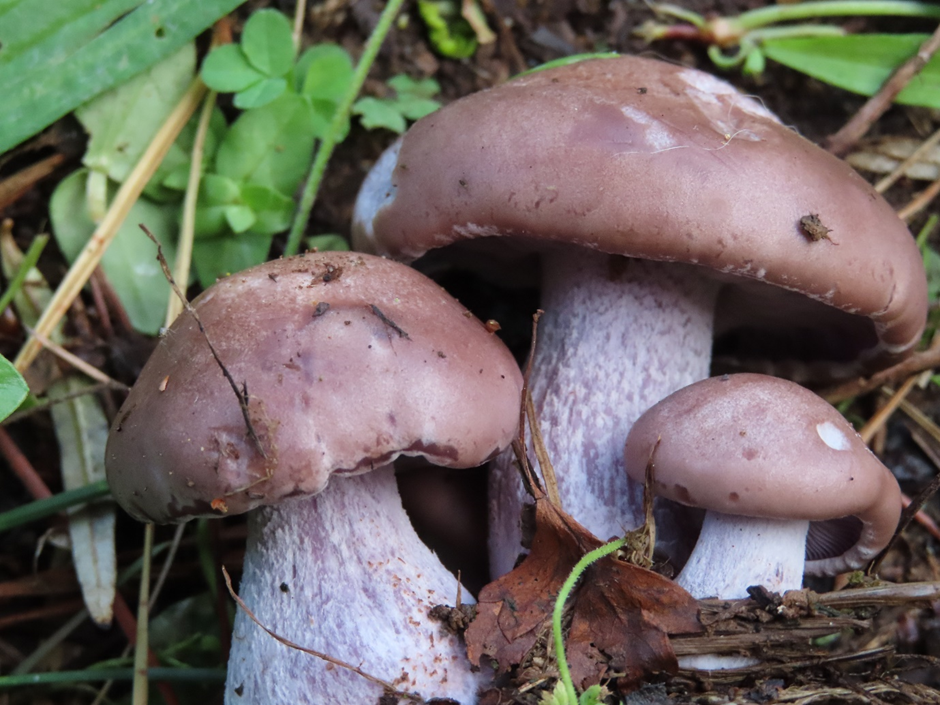 Over twenty-five types of fungi have appeared in the garden this year some in great numbers. These Blewit remind me of the mushrooms that graced the books of my childhood and you can see where the artists got their inspiration. These are either Field or Wood Blewit but I am sad to say that so far, my studies are confusing rather than enlightening me. 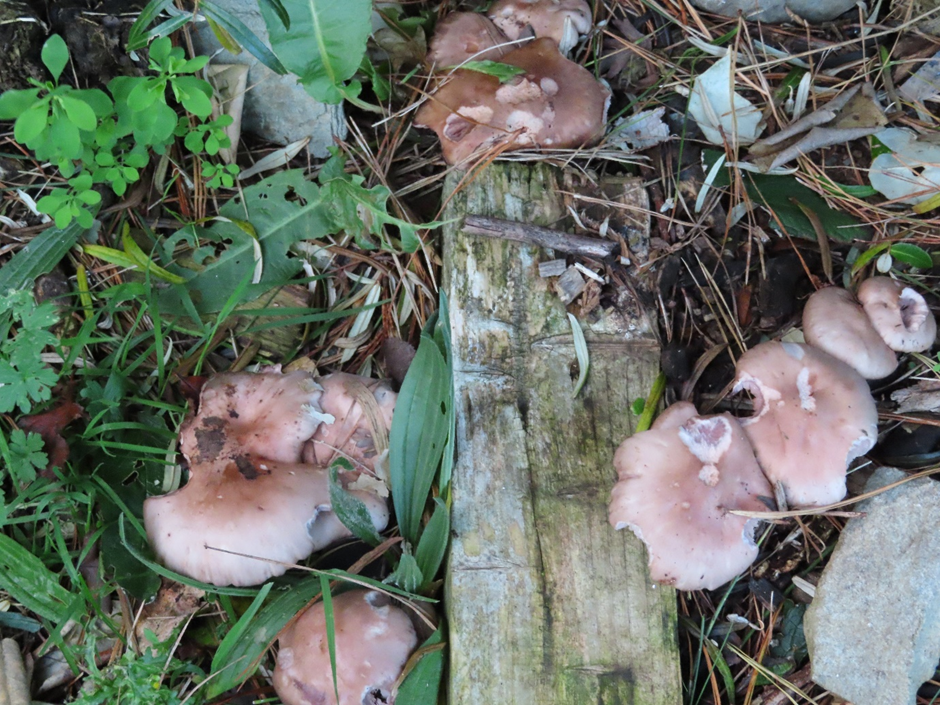 The same mushrooms a few days later. Something is finding them very tasty and I suspect these are part of the winter diet of the mice and voles that live in the nearby drystone wall and eat their way through my garden in the summer. 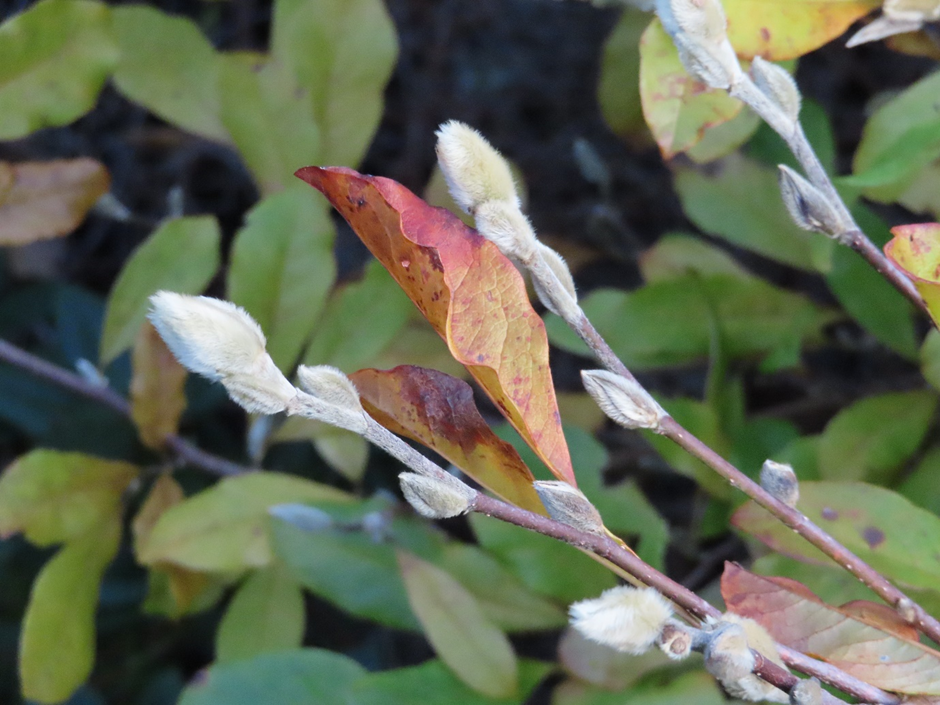 The buds on the Magnolia stellata are maturing and it will be one of the first small shrubs to flower in spring. It is a favourite of the peacock butterflies and as it is almost hidden by a number of other shrubs, I am hoping it will be protected from any further storms. 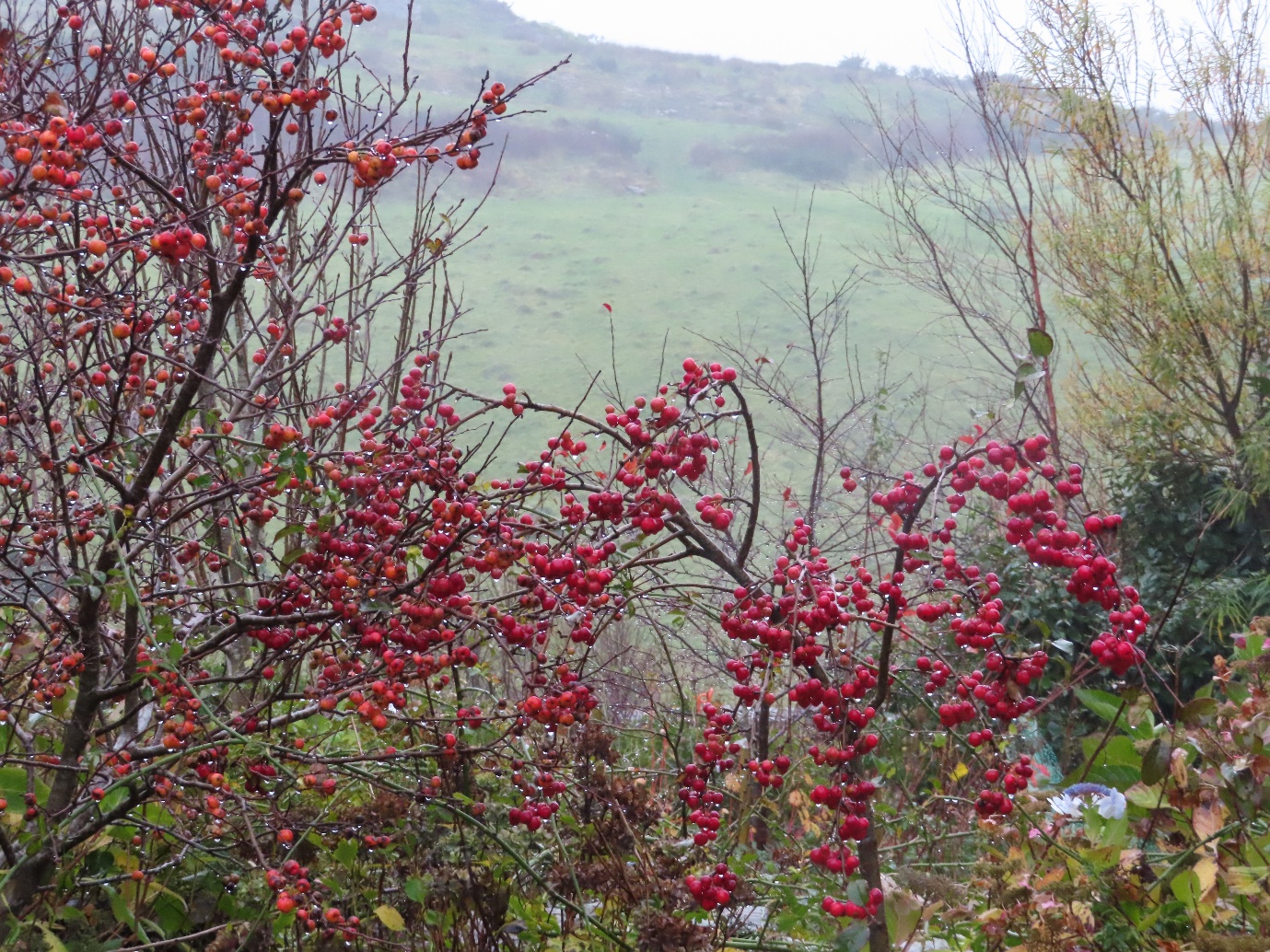 The crab apples are providing the most colour in the garden at present. These are Malus sylvestris – a native crab apple – and Malus evereste. The latter attracts many pollinators and is as attractive in spring as it is at the moment. Both produced a glut of fruit which have remained firmly on the trees despite the weather. 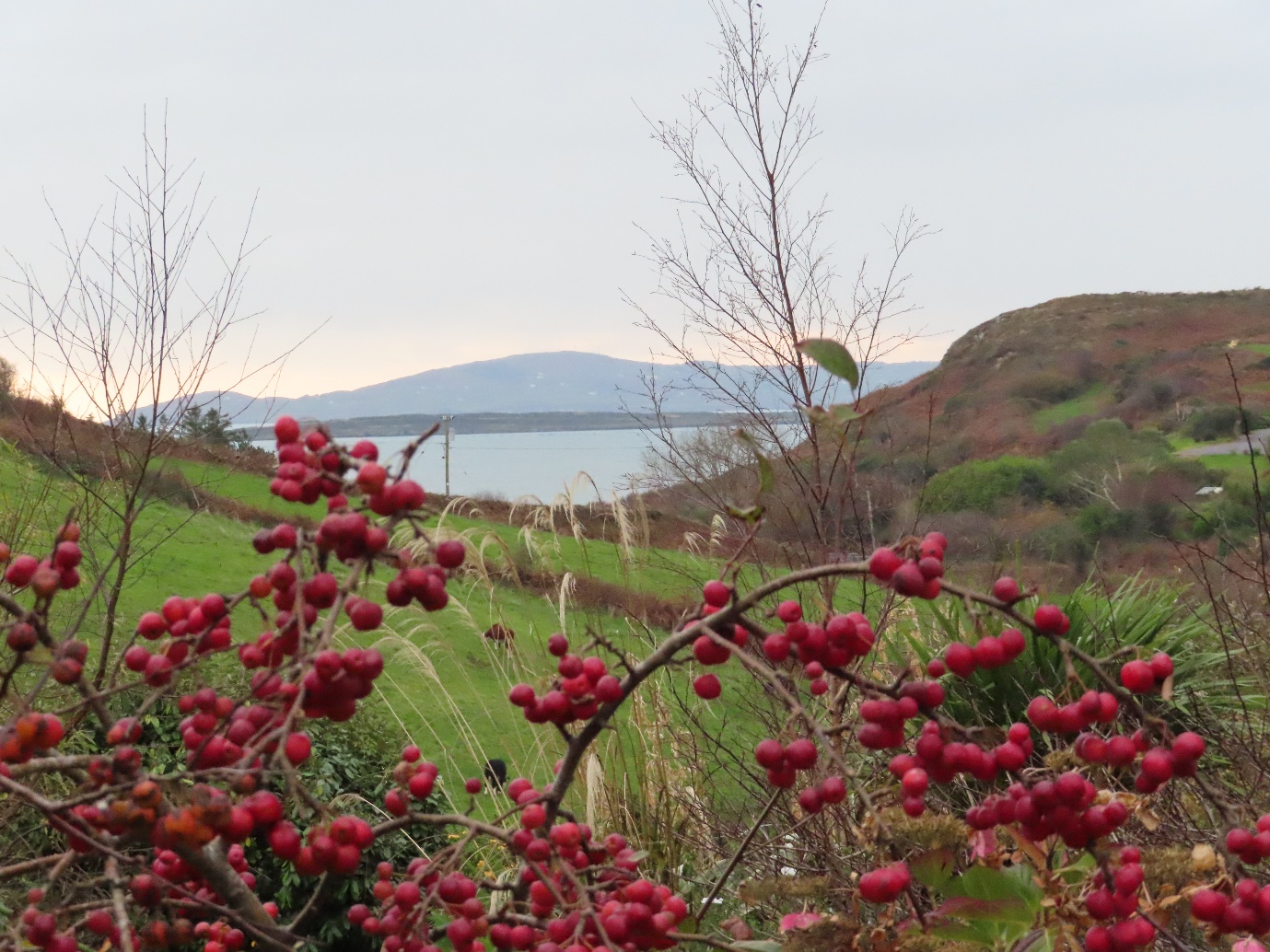 Malus sylvestris with Cape Clear in the background. 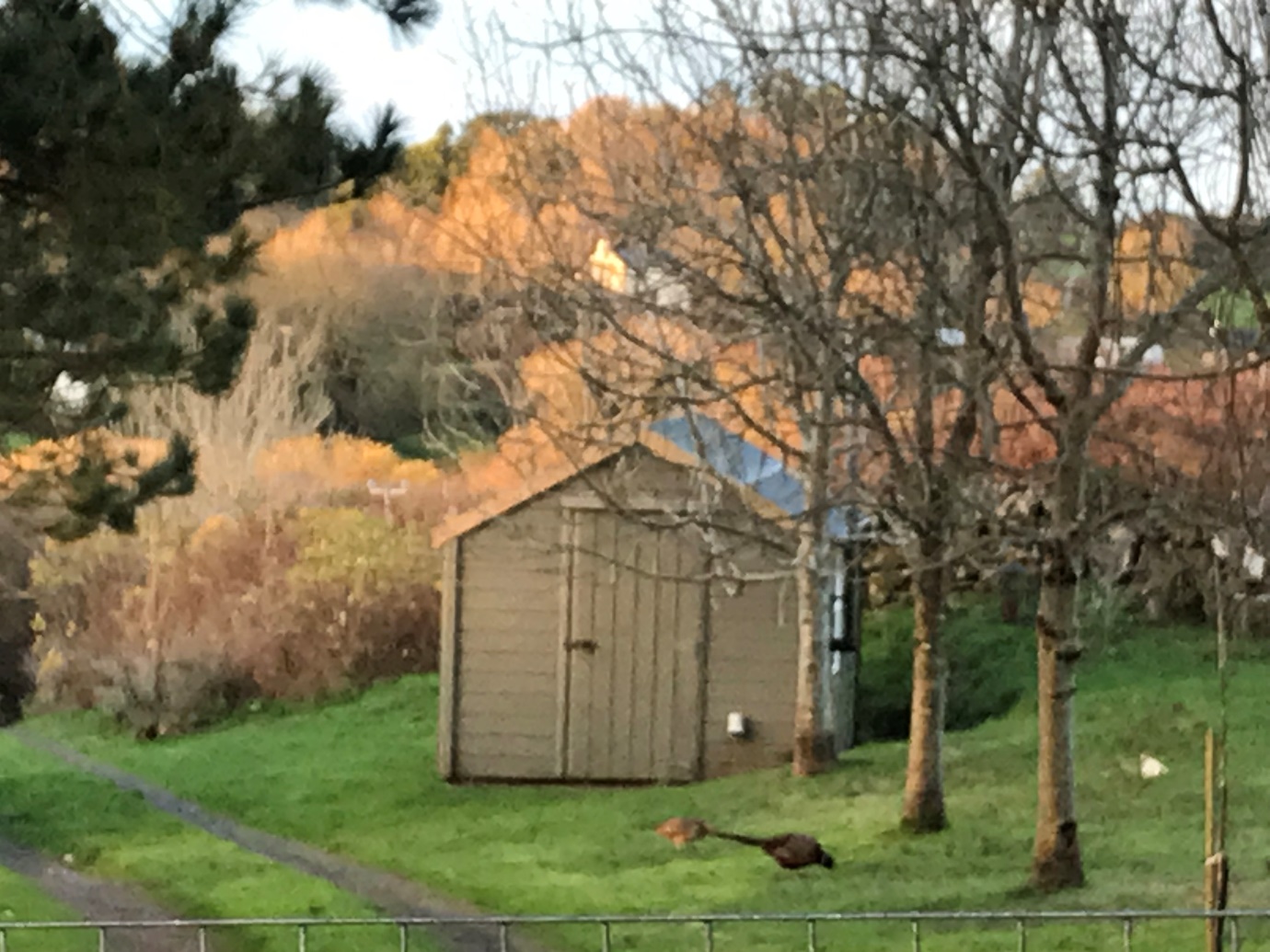 The few moments of sunshine transform the view from the driveway. This photo was taken as I was feeding the birds on the in the early morning. One male pheasant and four females now feed each morning and are usually waiting for me at the crack of dawn. The male pheasant is now so relaxed that he will remain within ten feet of me as I fill the feeders and scatter some seed for him. They are joined by two collared doves as well as numerous other small birds. 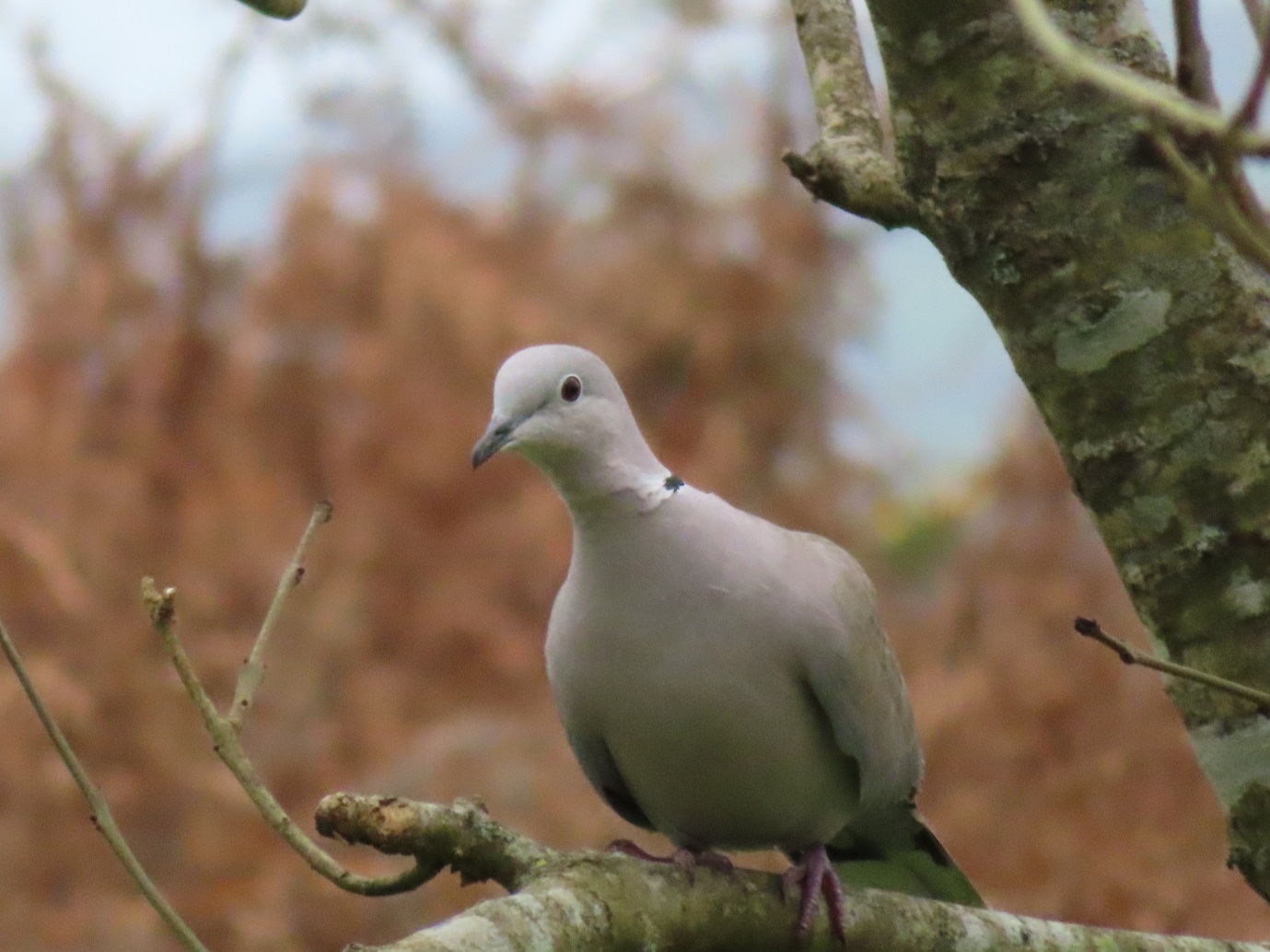 One of the two collared doves keeping a close eye on proceedings. 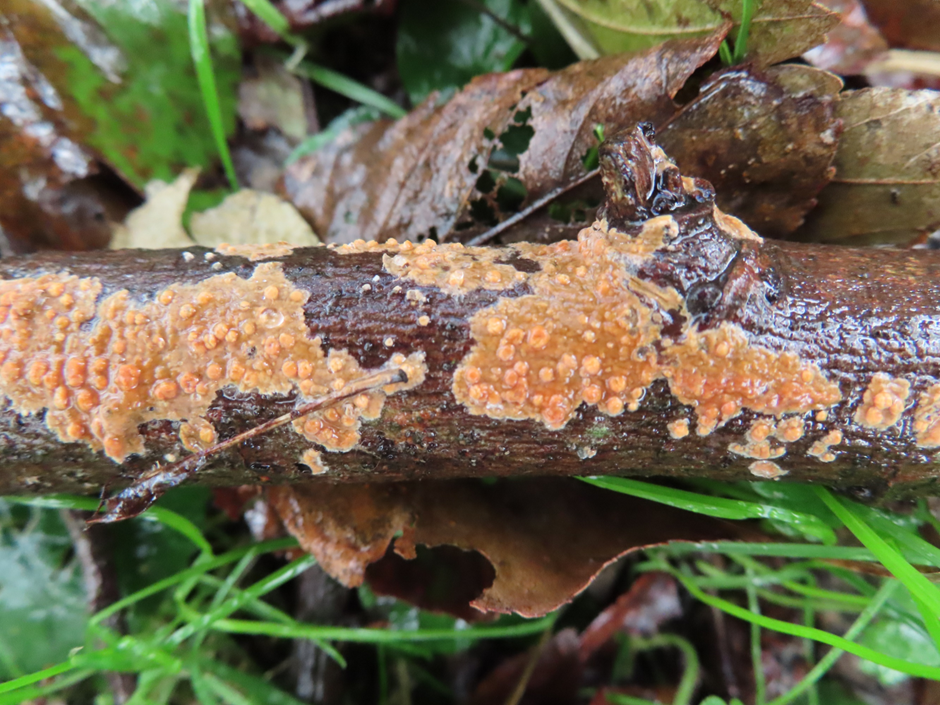 At this time of the year, you sometimes have to pay attention to detail to find the beautiful colours that are in the garden just waiting to be discovered. This fungus appeared on a dead branch under the Italian alders at the top of the garden. I think that it is an Orange Crust fungus but as usual am open to correction. 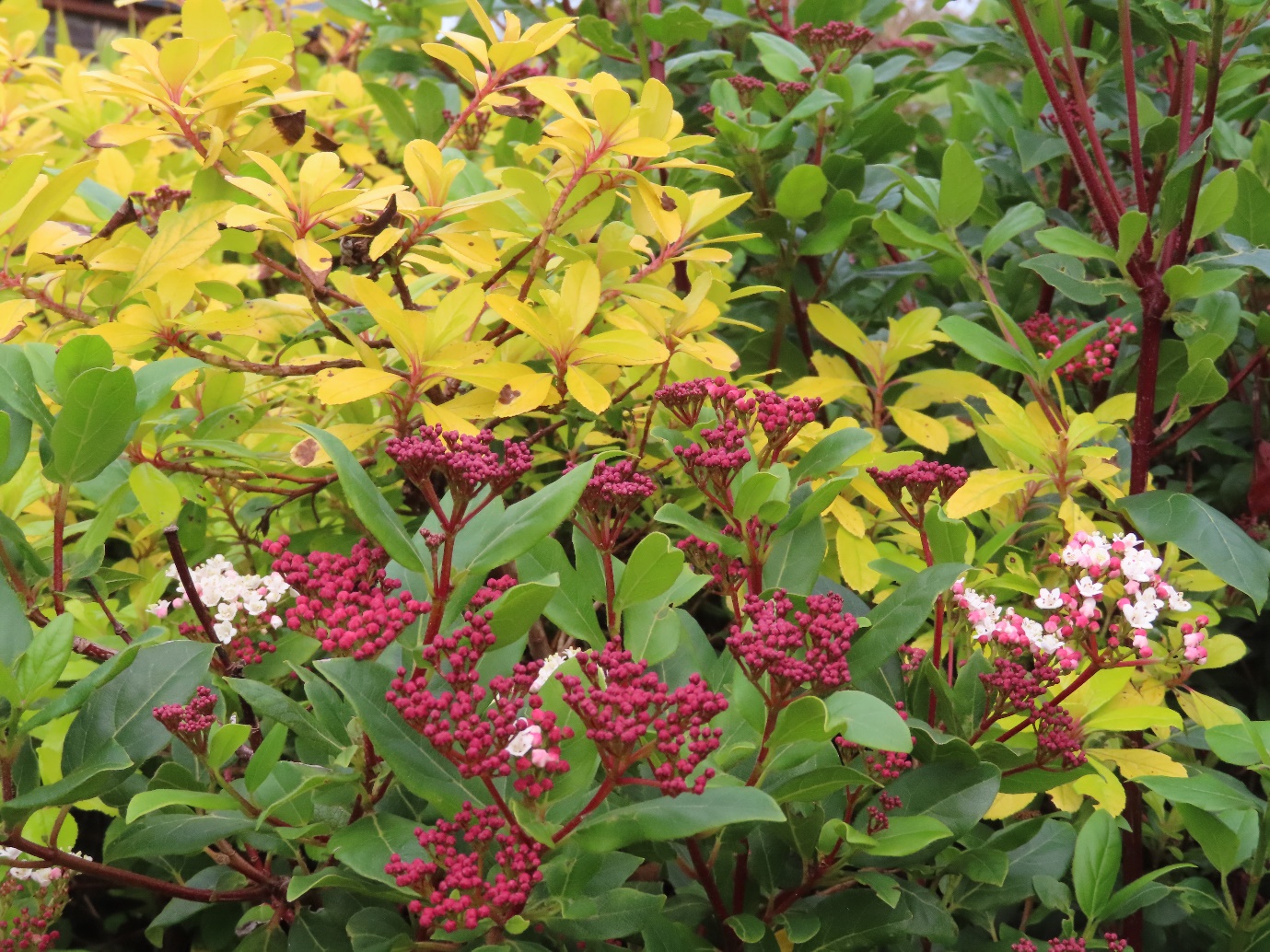 Many of my Viburnum tinus ‘Eva Price’ are infected with dieback and I suspect that they will all succumb in the end despite my efforts to eradicate it. This viburnum is separated from the affected hedge and seems to be thriving. It produces a lovely show of colour at this time of the year 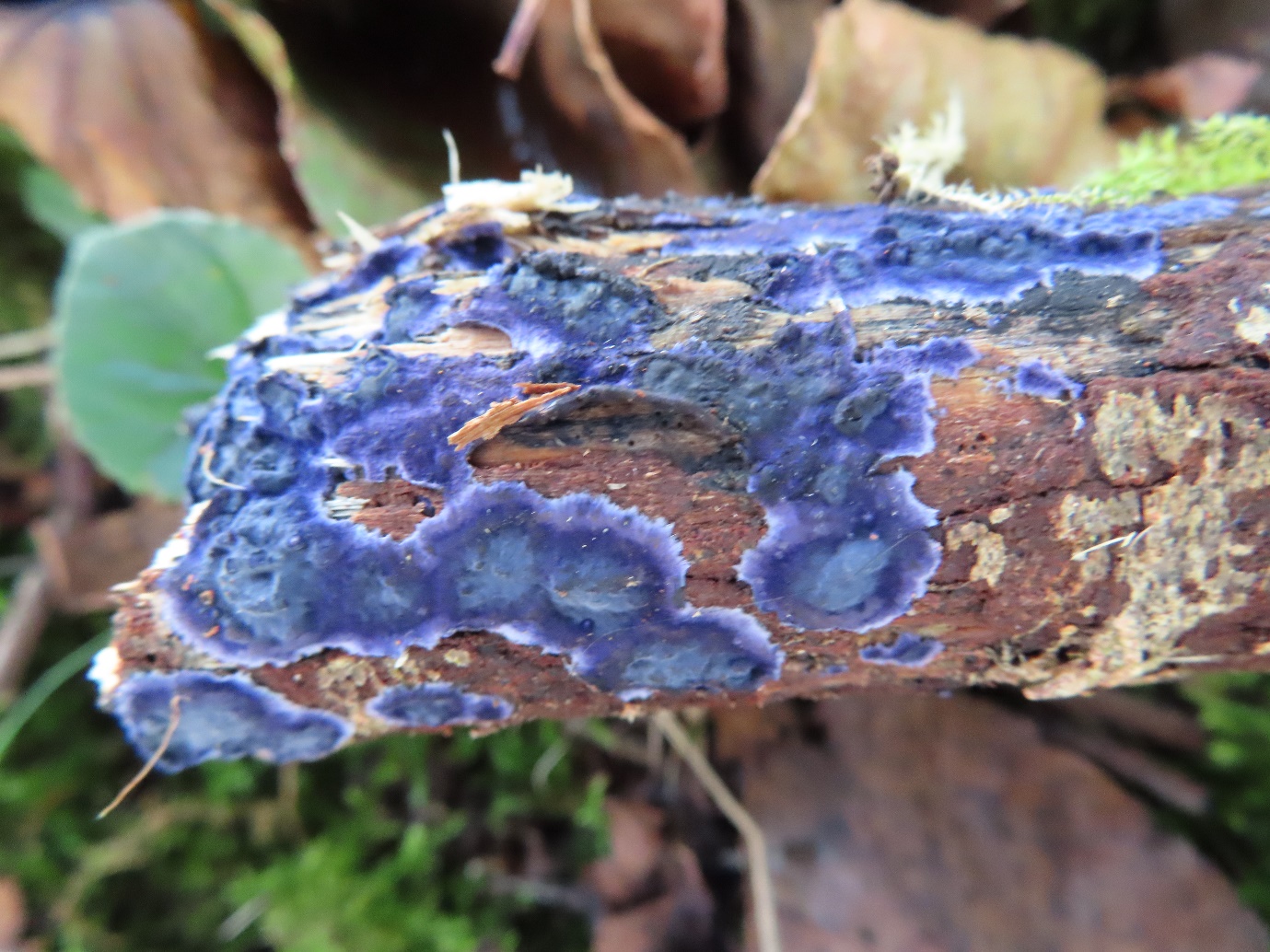 This stunning crust fungus – Terana caerulea (‘Cobalt Crust’) has made a repeat appearance on the dead wood at the bottom of the drive. It favours the branches of hardwood trees, particularly ash and half a dozen or so grow nearby. It usually grows on the underside of dead branches and I discovered it last year by chance. I now check the branches at this time of the year and have been lucky to find it once again. Some sources cite it as rare in Ireland but I wonder if this is because it hidden from sight. 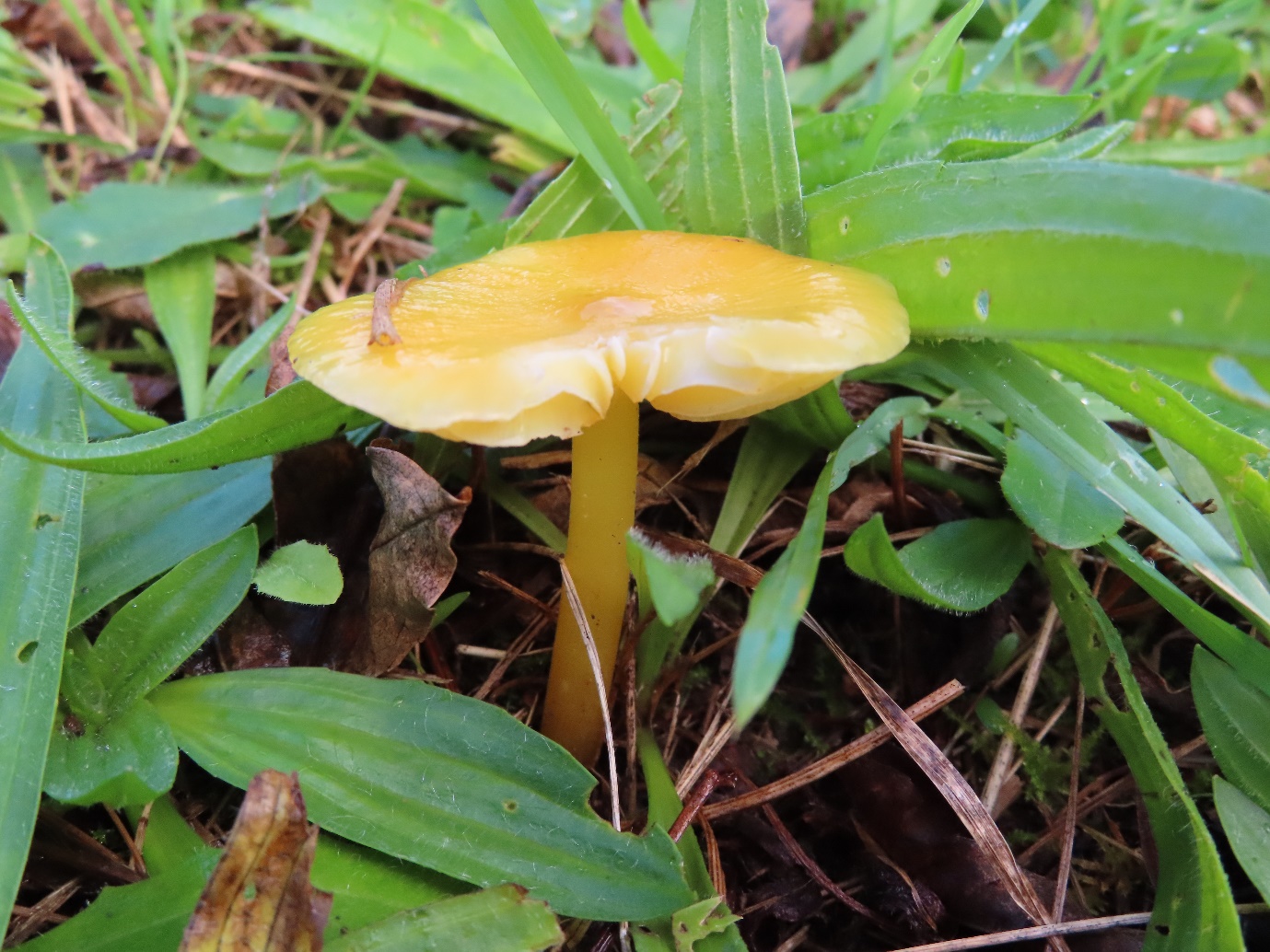 This was the last of the waxcaps that appeared on the hillside this year. They are so small that they are easy to miss. However, the hillside is becoming a rich source of mushrooms and other fungi and I am hoping that they will increase each year if I leave the area alone. 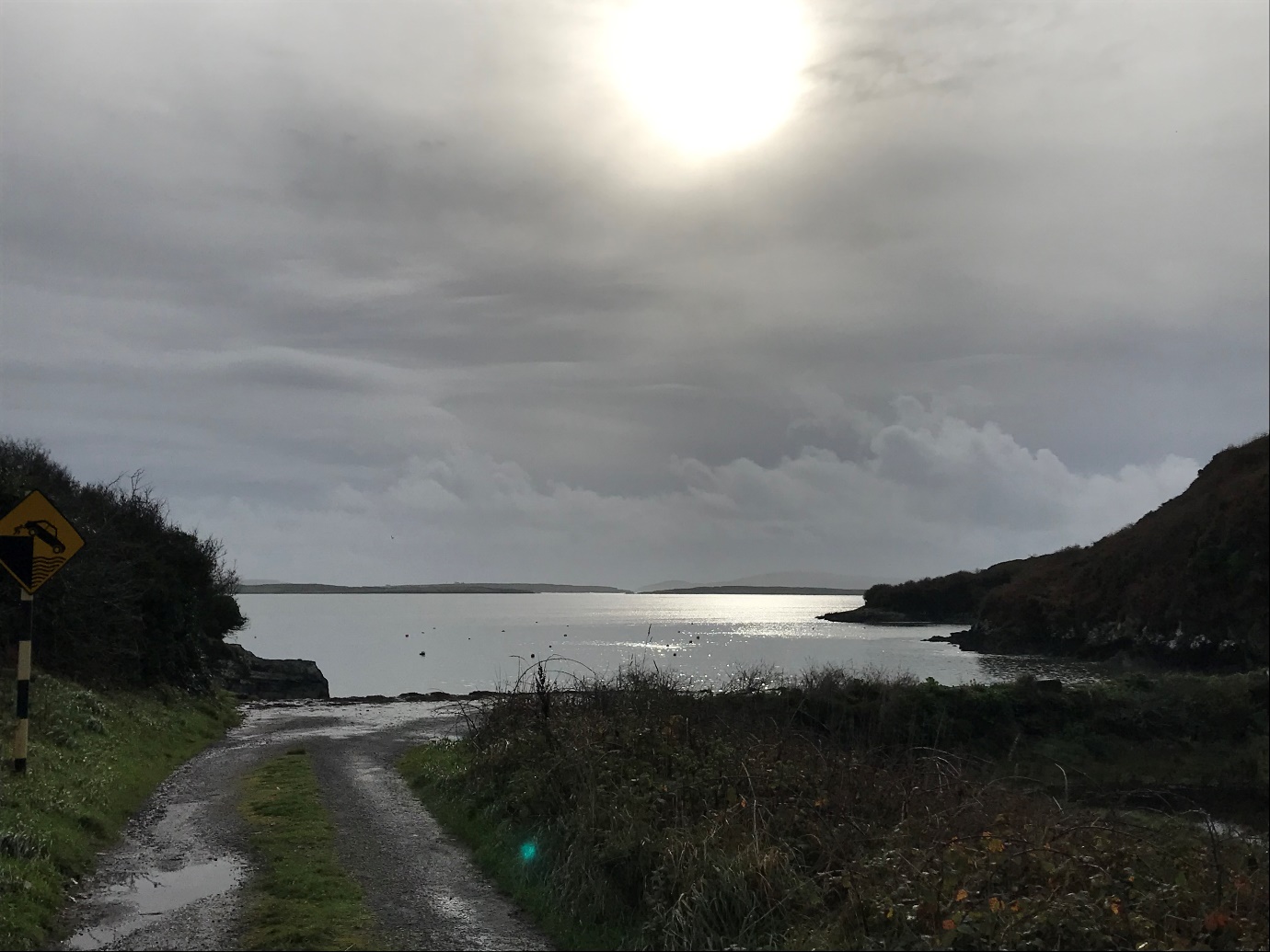 Even silver and greys can be beautiful in their own right. This is Roaringwater Bay in between storms. It is hard to imagine anything more serene.