The Survivor of the Year 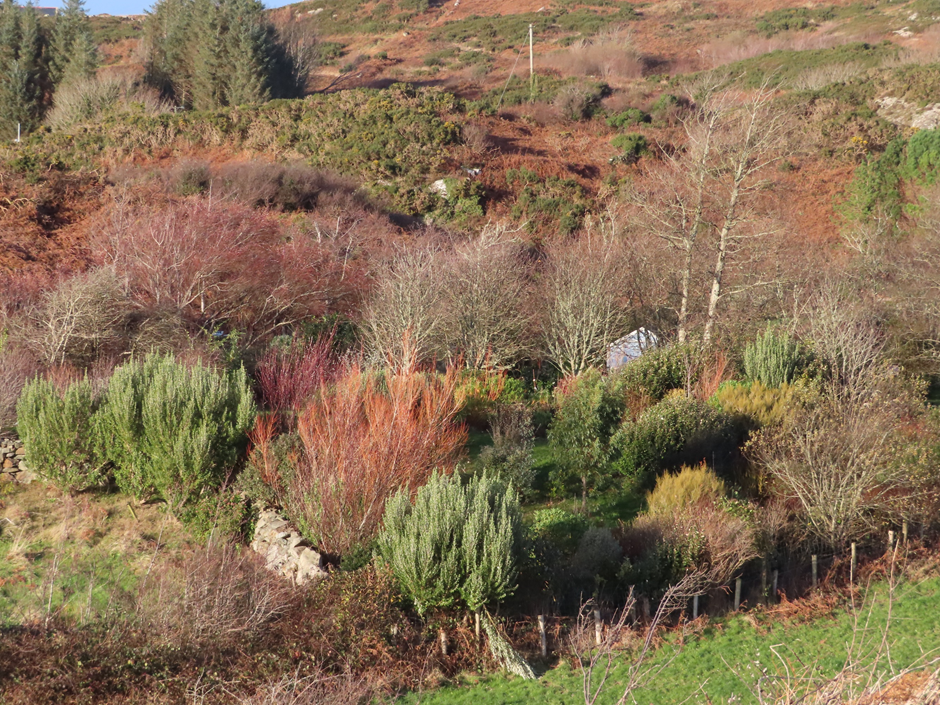 My copse and the once bare hillside just after Storm Barra

I now know what a ‘weather bomb’ is, although I would far prefer to have read about it in a book. Ophelia was the last severe weather ‘event’ in this area, although the devastation to my garden when the ‘tail end’ of Darwin hit remains in my mind as being far more destructive in the garden. I lost a considerable number of trees in the copse during the latter and now always fear for those remaining. I am delighted that the tree surgeons came and pruned all of the pines on the driveway to reduce their top-heavy weight in the last few weeks. They also removed the dead alder in the copse allowing me to rest easy as the winds picked up. The only damage caused by Storm Barra was the Oleria in the left-hand corner in the photo above and another at the bottom of my drive. 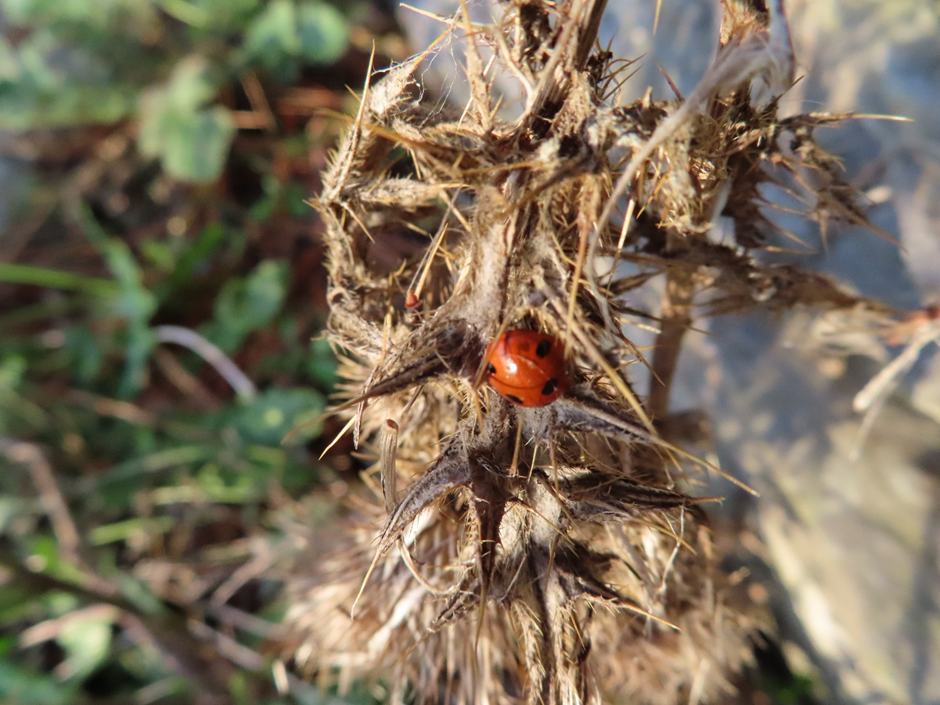 I noticed this little ladybird on my tour of the garden checking for storm damage. Although the ‘bomb’ had receded, it was still very stormy and I can only marvel at the courage of this little insect which was clinging to the seed head of a thistle. – a reminder never to remove wildflower seed heads unless you really have to. 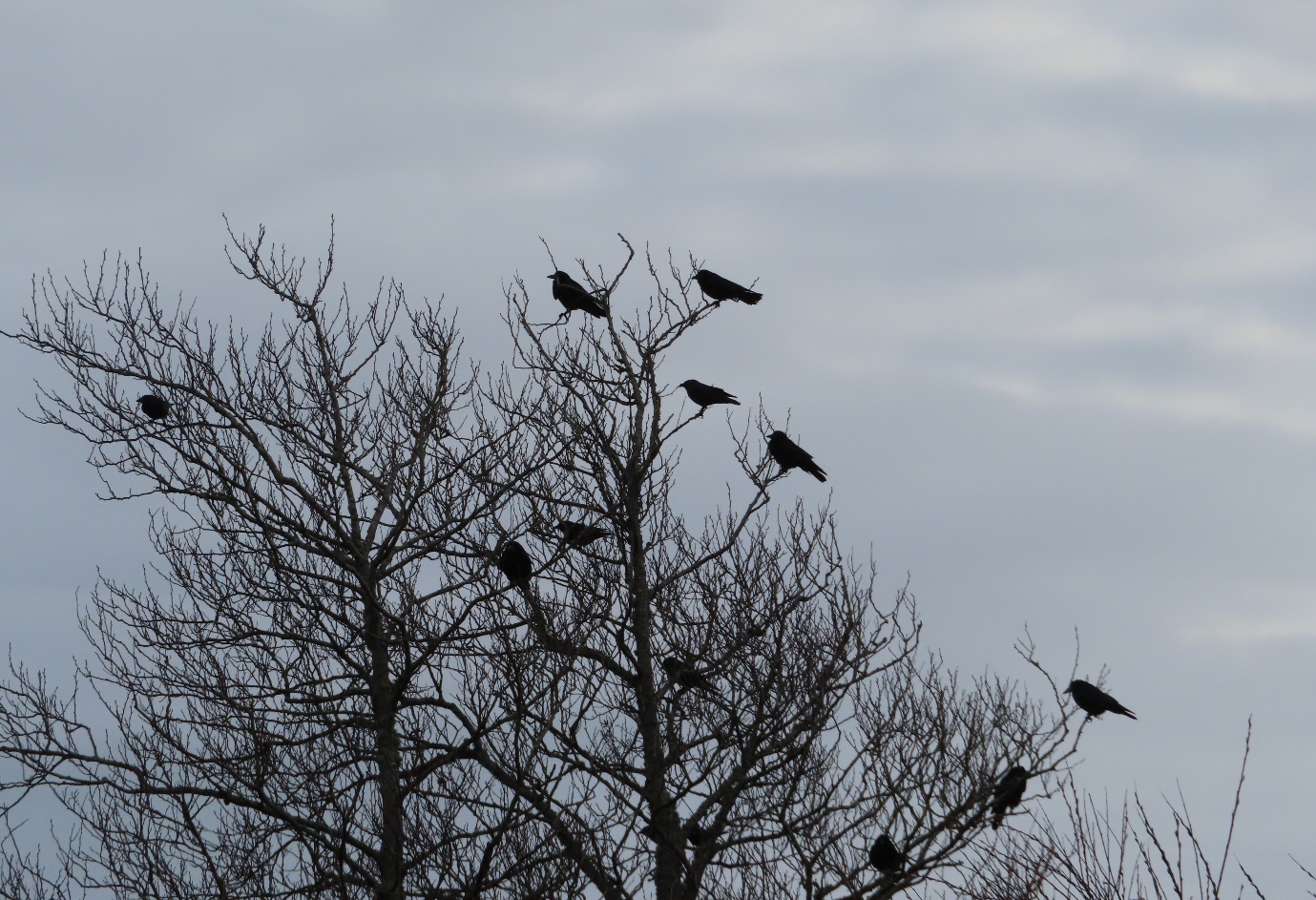 I have a love-hate relationship with crows. They love my garden in the winter and I hate fact that they defeat my efforts to deter them at every turn. Like all the other birds they are waiting for me each morning ready for feeding to begin. Unlike the other birds they turn the garden into a scene from a Hitchcock film as they sit in the trees or on the gate to the driveway. There are up to forty at a time and while they noisily fly away at my approach it is just a ruse and they happily spend most of the day in the garden. 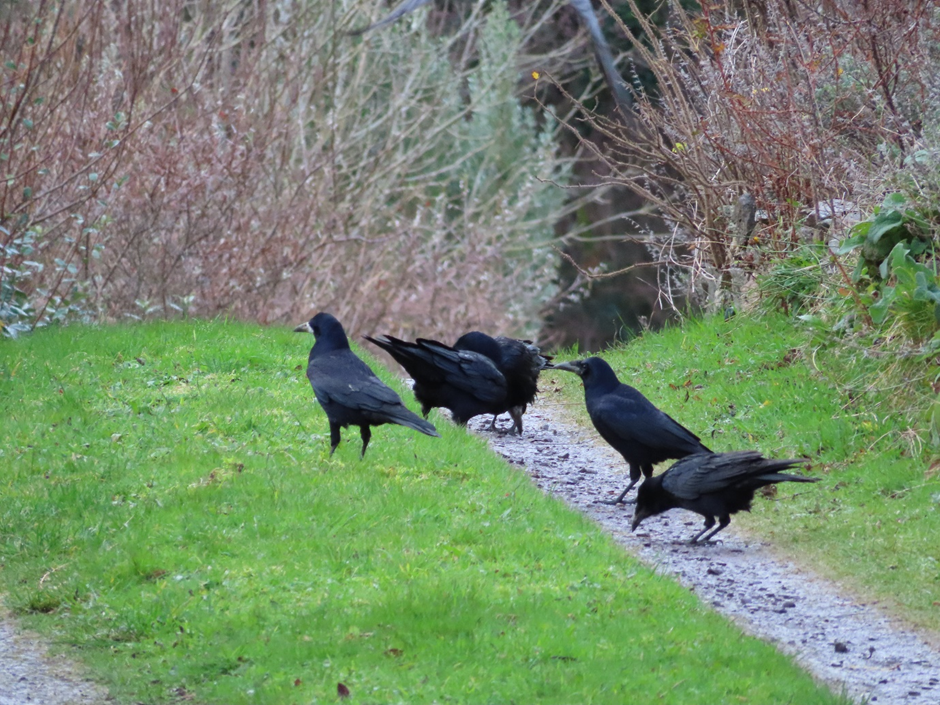 I have been experimenting with making my own fat balls for the birds as I have all of the ingredients to make them myself. At this time of the year, I mix oatmeal, bird food and some rendered fat taken from the meat that I get from the butchers for the dogs. This is not particularly good for dogs, but is perfect for the birds who need it to get through the winter. Turkey, pork and poultry fat are not recommended and may even harm the birds, so the castoff fat from the dogs’ food is just what is required. My concoction is more like flat cakes than balls but the birds love it which is all that counts.

Every year the crows demonstrate their intelligence and dexterity by destroying my bird feeders or using other methods for accessing the seed. I have seen them swing back and forward on a feeder until it falls to the ground, they can open ‘secure’ caps and tear the mesh in the peanut feeder so that they all fall to the ground. However, I am not a quitter. In an effort to thwart the crows this year I came up with the clever idea of putting my fat ball mixture in tough plastic containers from the kitchen. I made sure that these were too big to go through the entrances to the bird feeders and could only be put in place by opening the slate roof. I retired to the house feeling very smug. Imagine my surprise a few hours later when I checked the feeders to find that two of the three containers had disappeared never to be seen again. Nor was there a trace of the fat ball mixture. I have no idea how they were removed by the crows as I had to undo a screw and remove the slate roof to place them initially. I guess that somewhere there is a very clever and very fat crow or two who have no interest in recycling plastic. 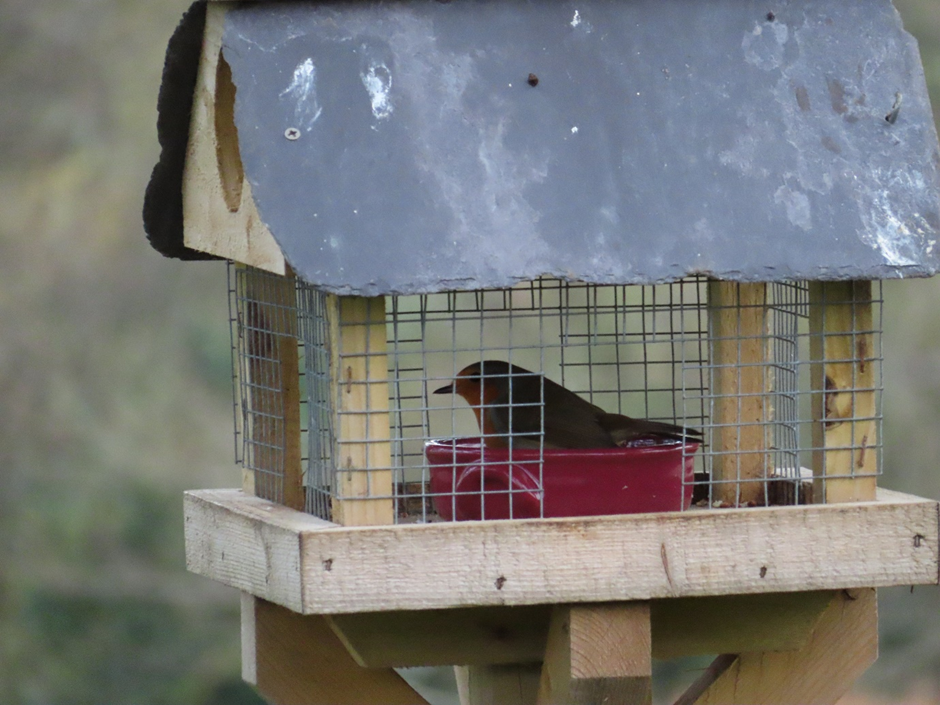 My next attempt using porcelain bowls has been more successful although I don’t think that this robin has quiet got the idea as he seems to be sitting in it. But then maybe he is being territorial in a new way. 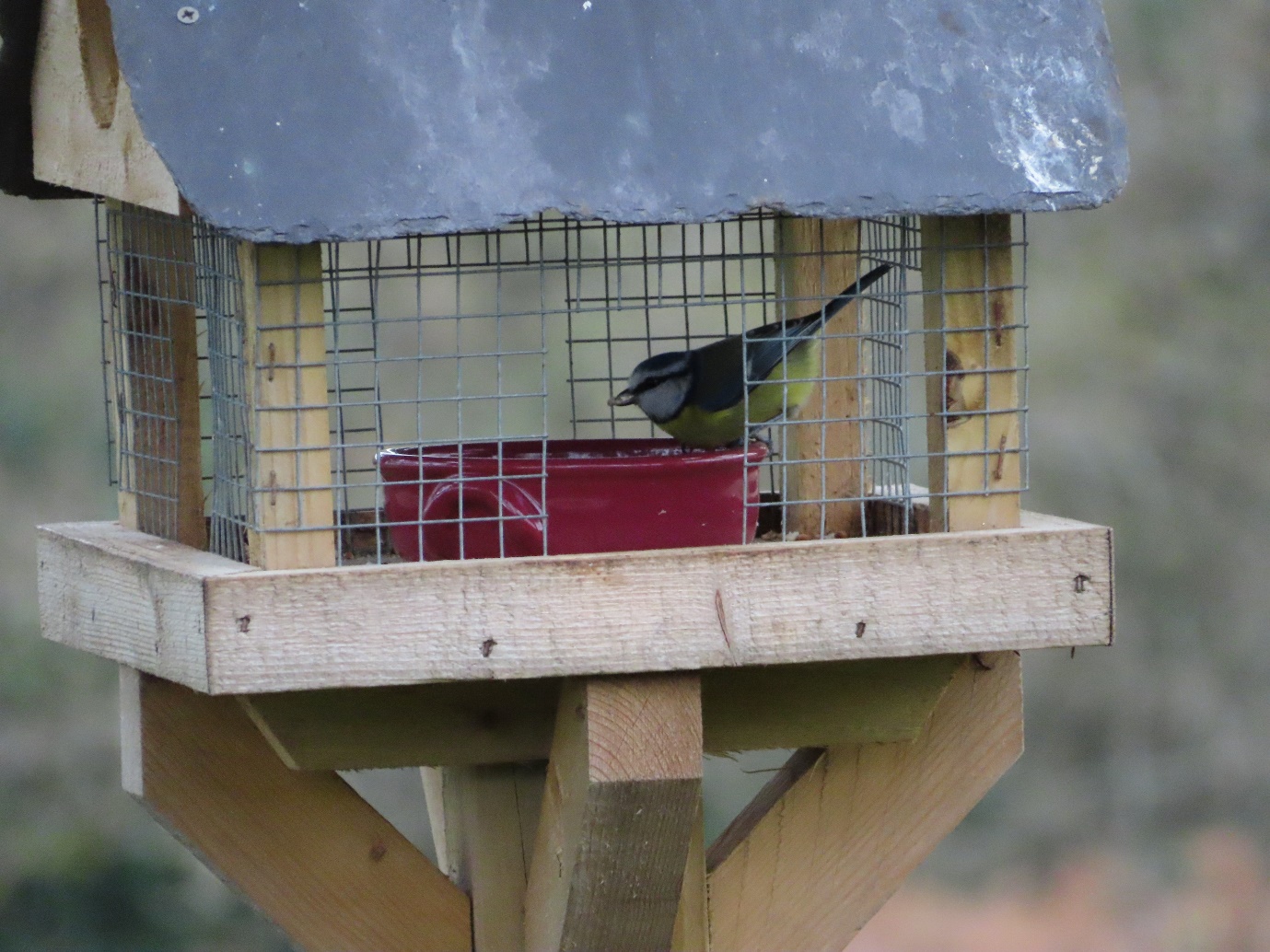 This blue tit has the right idea 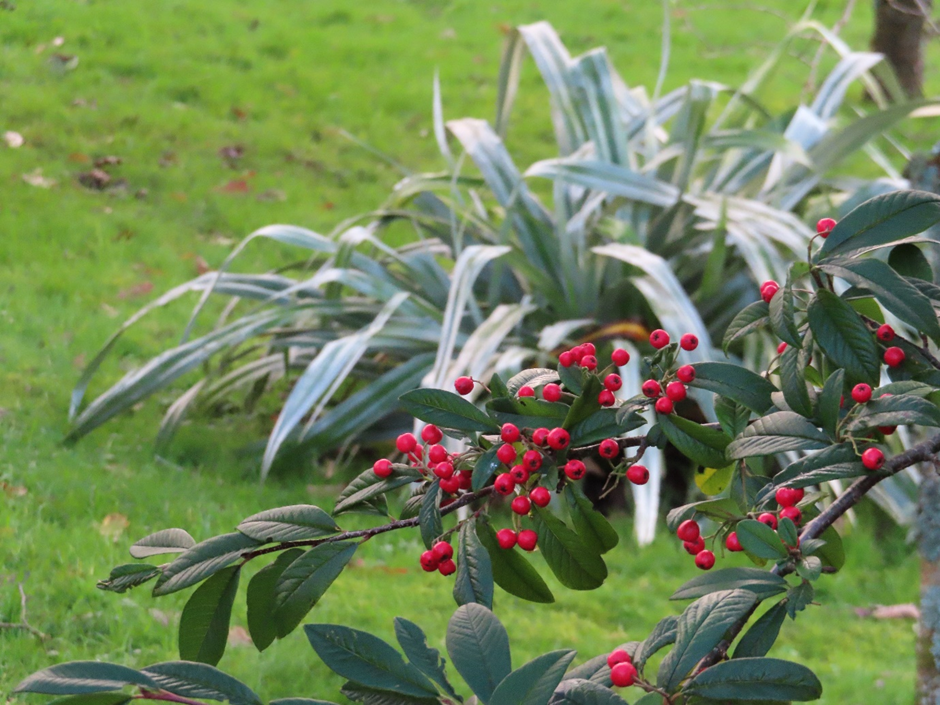 Every year I notice that there are some berries that are ignored despite the fact that they look very appealing. Cotoneaster is one of these. The shrubs provide good cover for the birds and this one is just by a bird feeder but the berries were untouched even before this was put in place. 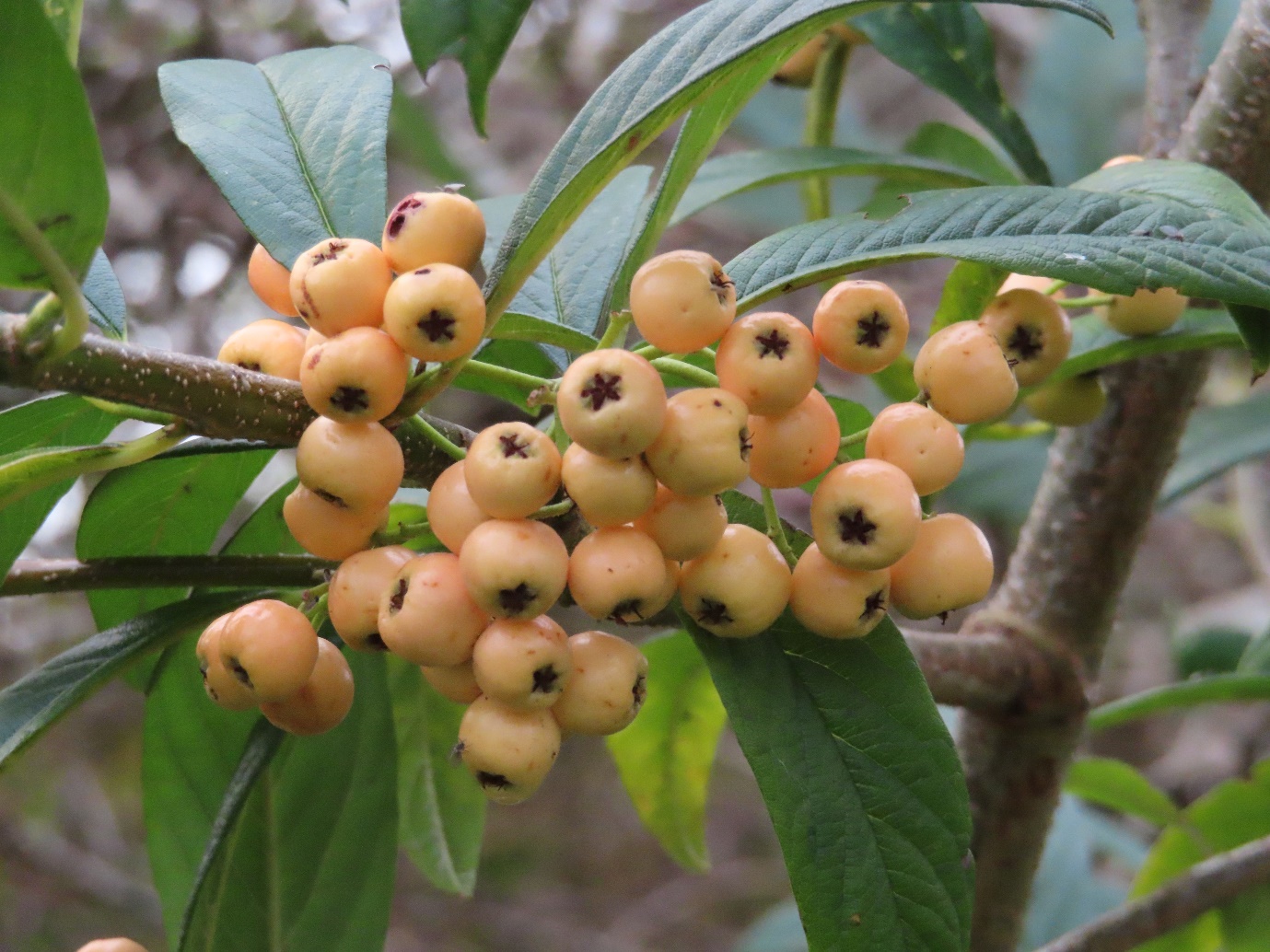 Cotoneaster Rothschild seems to be no more appealing 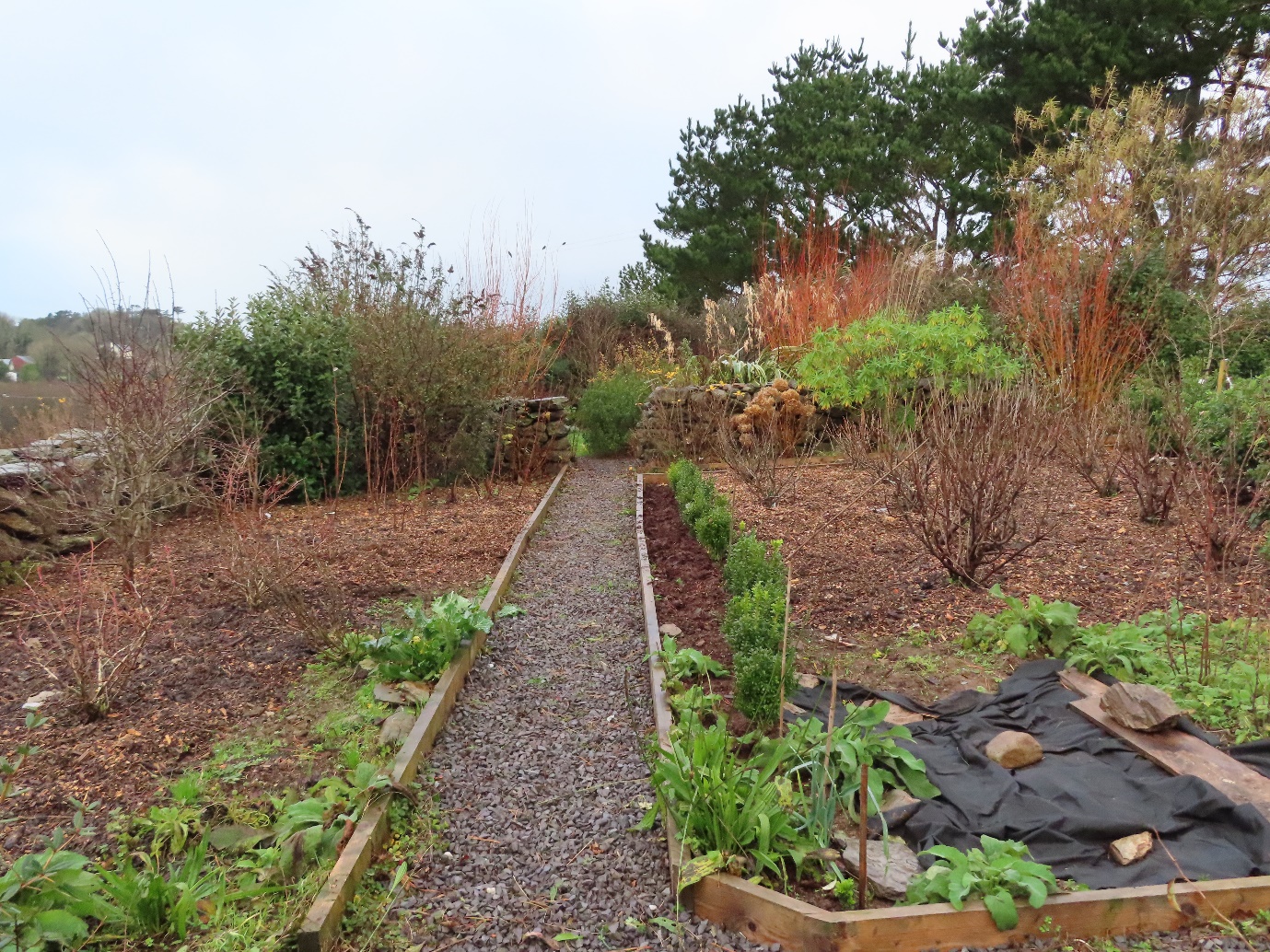 Given the weather, the work in the garden has been limited. I am still trying to figure out the wind tunnels in the garden that can leave one shrub looking frazzled while its neighbour is in perfect condition as happened with Storm Barra. I have been adding to my trees in the field below the house and am starting to prune some of the shrubs. The fruit garden has been given a makeover and has never looked so tidy. I am still not sure if all the fruit bushes are healthy after the battering that they got early this year and will have to wait until late spring to find out. 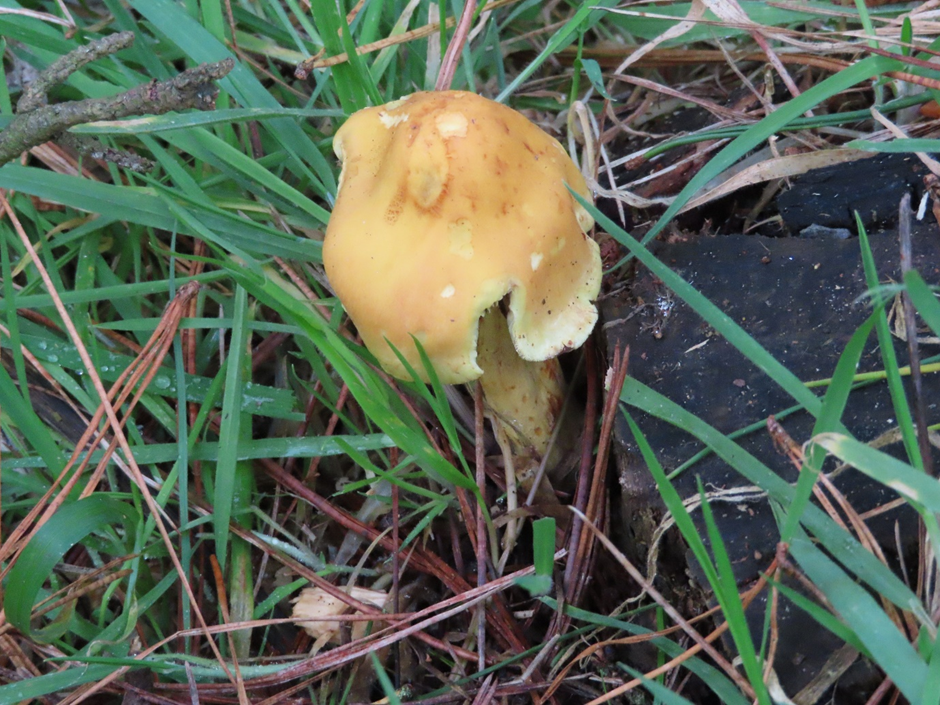 The last of the fungi have made their appearance. I think that this is a lone Sulphur Turf growing on an old tree stump. In previous years I have had dramatic displays of this fungi but realised that the tree stump which hosted them was accidentally buried. I hope to retrieve it during the winter. 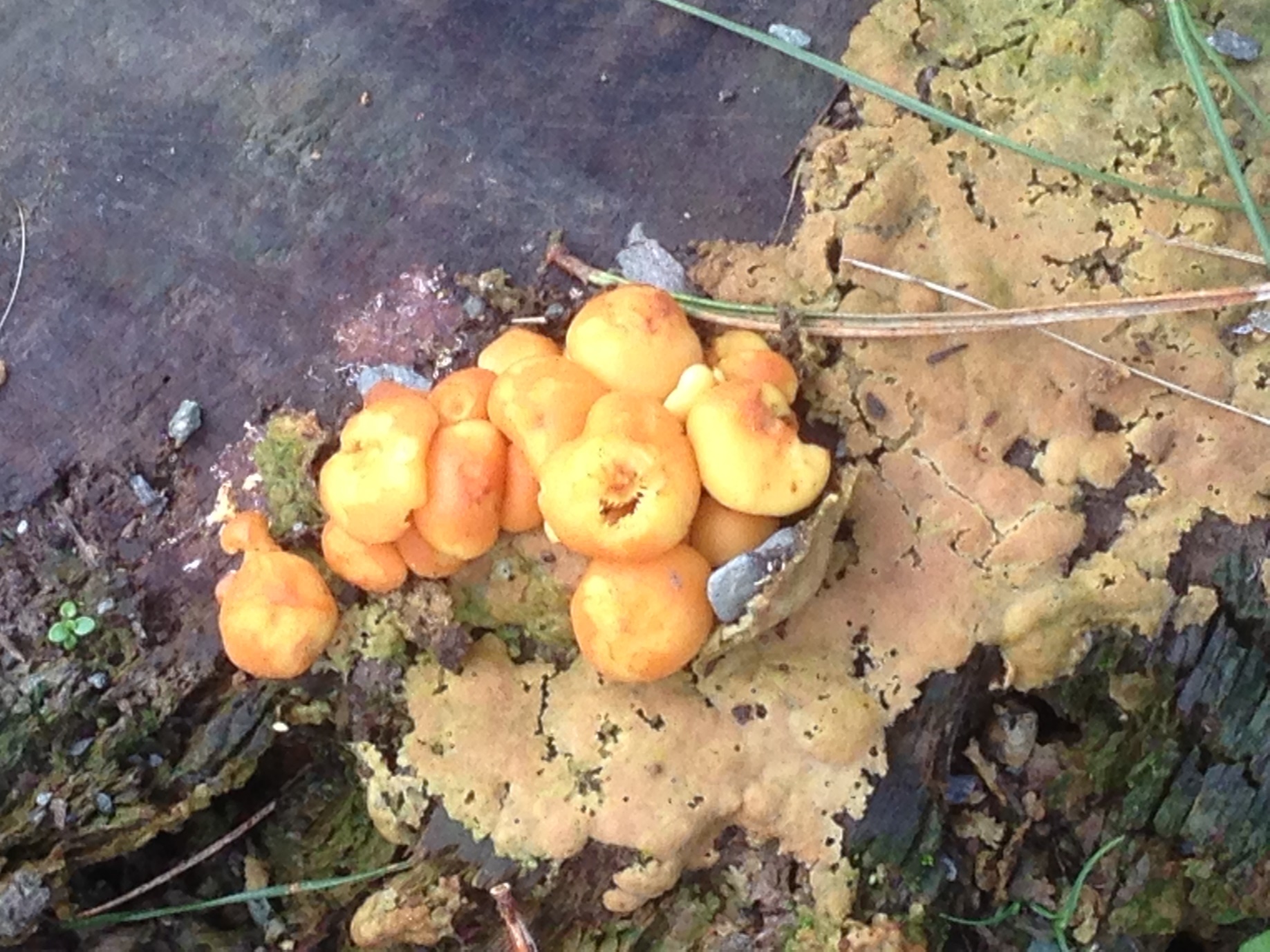 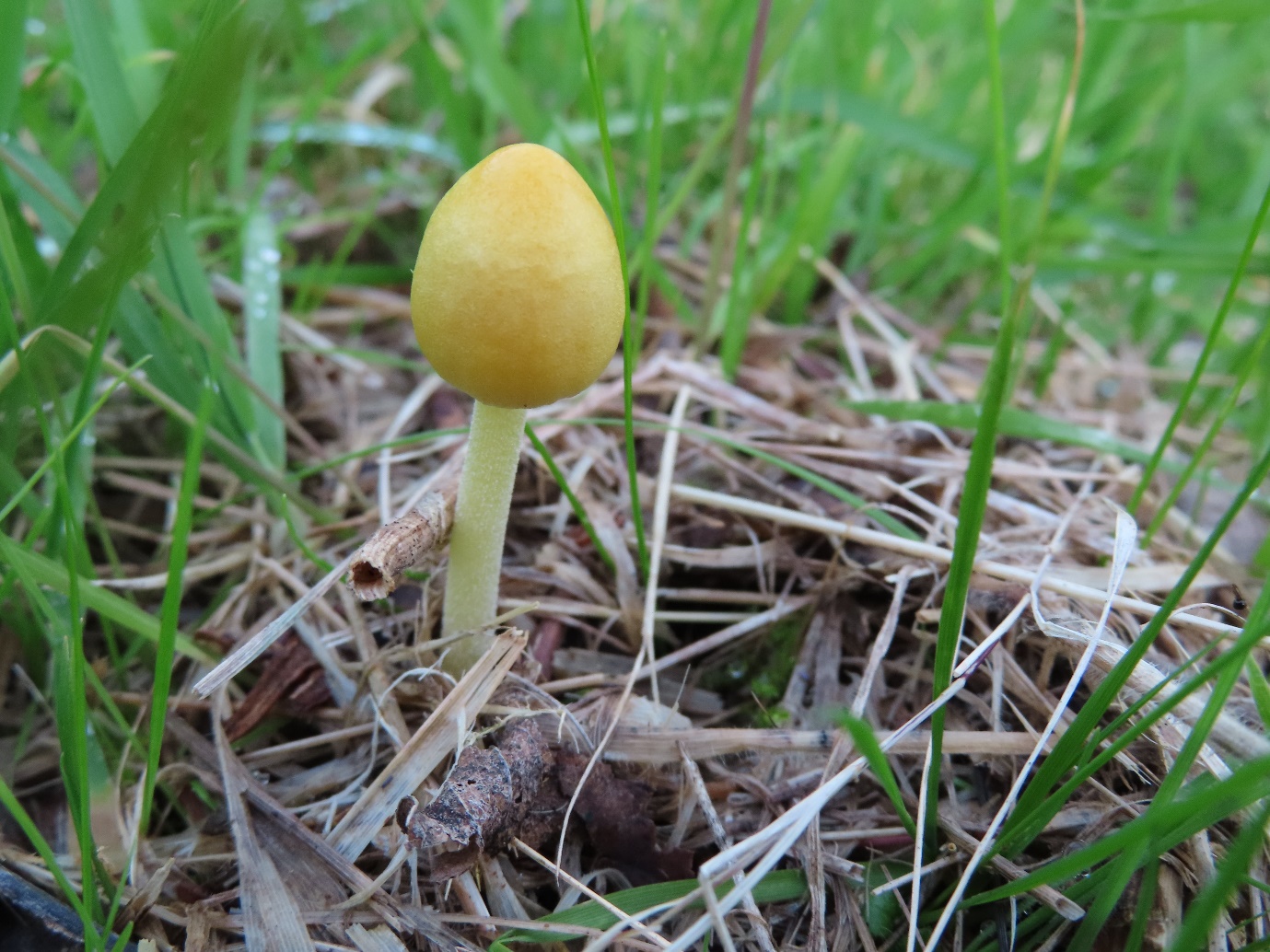 I still have not identified this tiny mushroom that was growing in the wildflower area. It lasted just a day and was no more than an inch high and I am determined to accurately identify it as soon as possible. 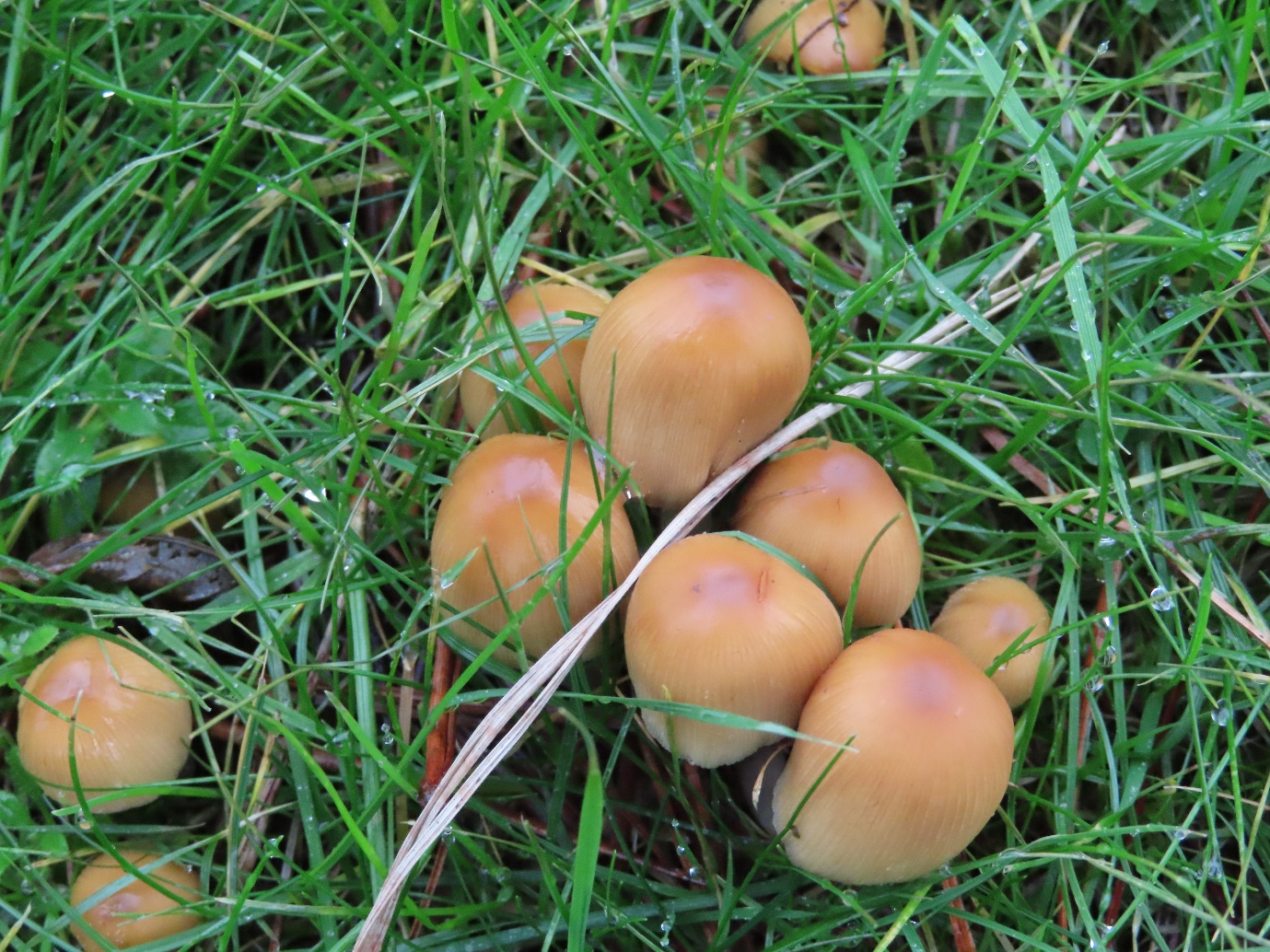 These inkcaps grow close to the pine trees on the driveway and reappear almost monthly. This is their Christmas appearance.

Every year the beautiful Camellia Reticulata Inspiration starts to flower just before Christmas. This year is no exception. What is unusual is that two or three other varieties are starting to flower. I do hope that they will be able to tolerate any frosts. 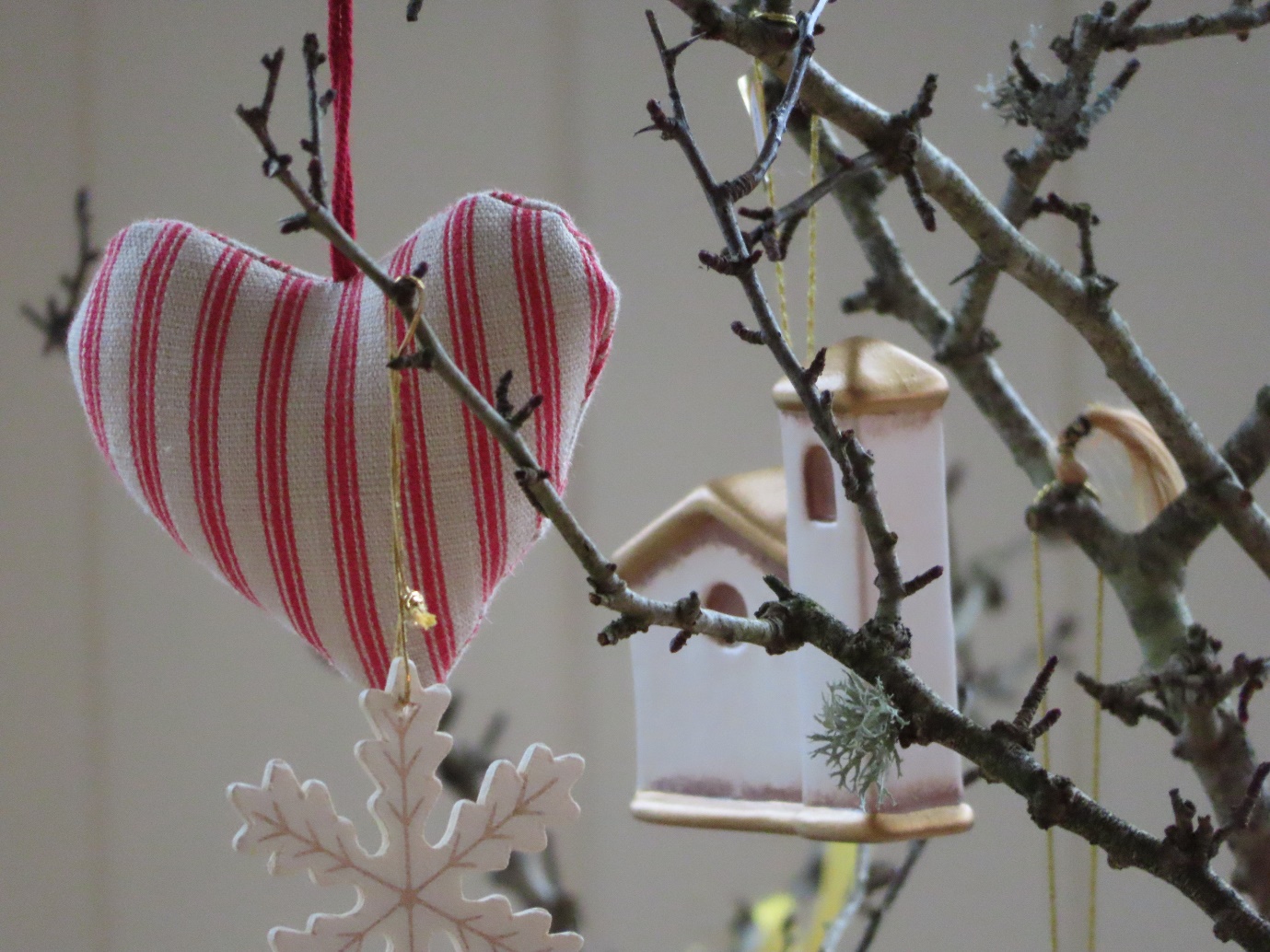 My Christmas tree has been problematic this year. I usually pick a branch from a hawthorn tree that needs to be pruned. This year the choice has not been extensive and I have ended up with a wind-swept creation that is more relevant to Storm Barra rather then Christmas. To keep it upright I have had to reduce the trunk so that it now looks like a miniature tree. However, no trees were killed to produce this creation and not many Christmas trees are covered in beautiful lichen and have the chance of flowering before the end of the season. 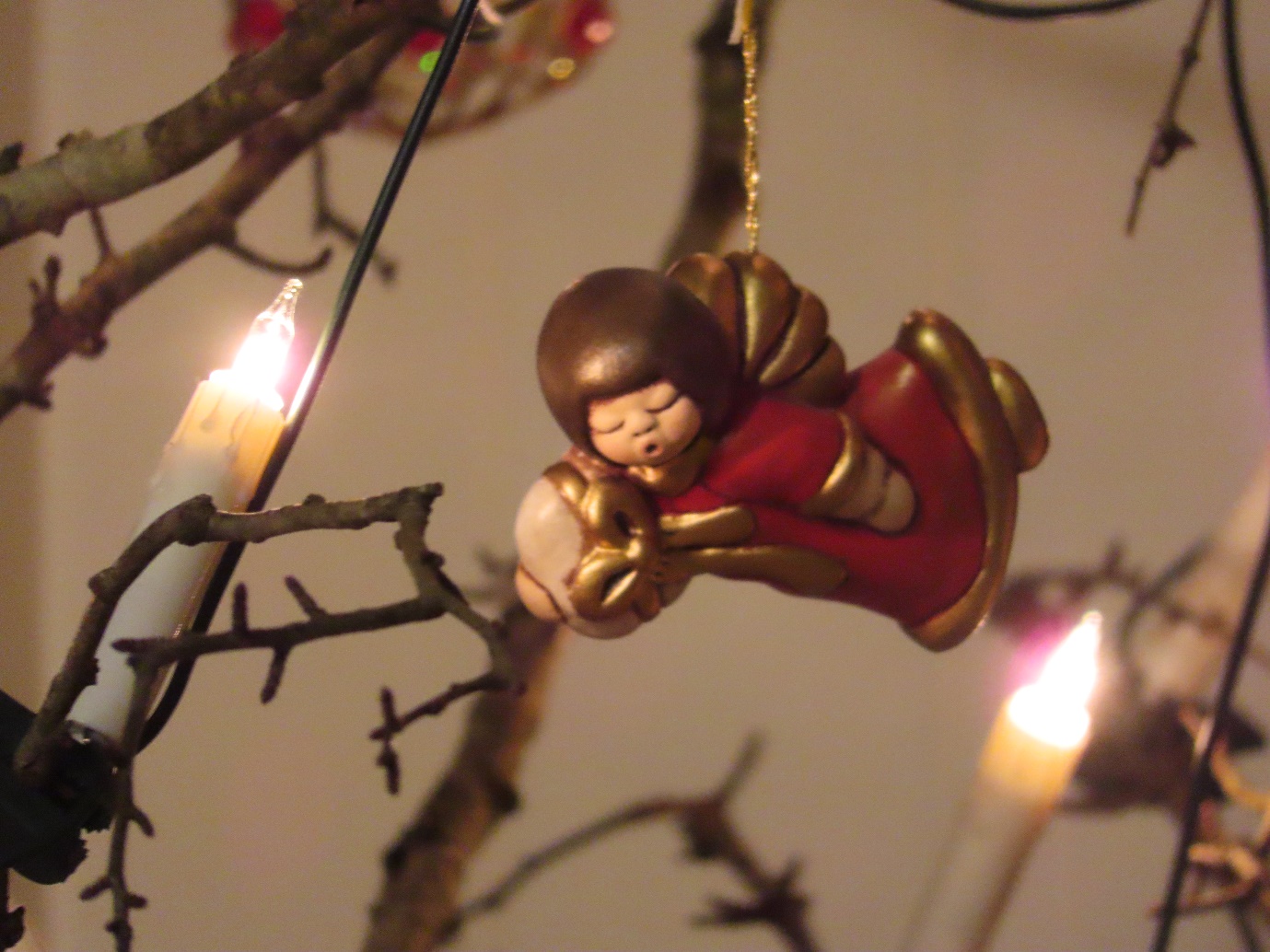