The End of a Long Hot Summer 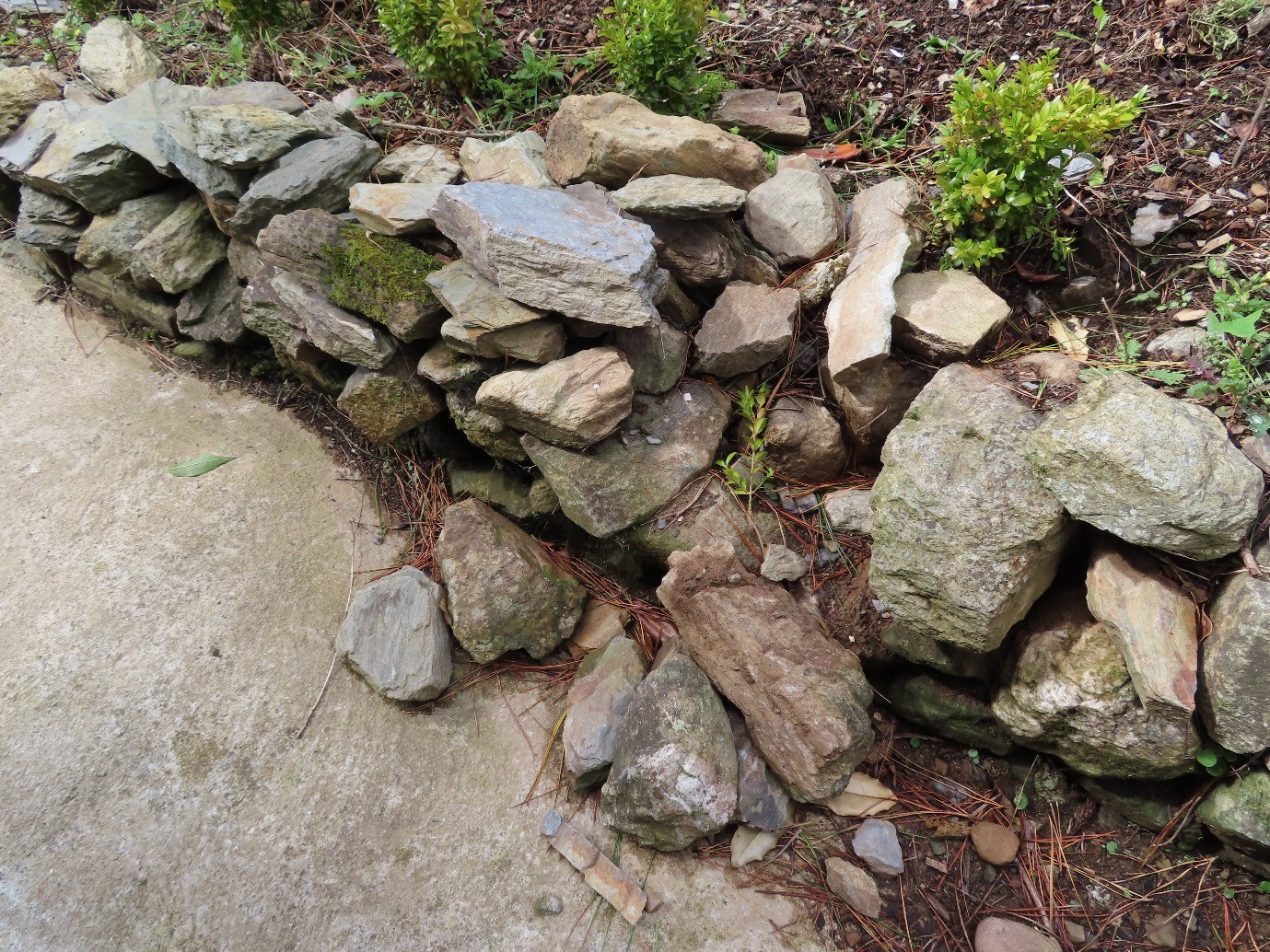 You can tell that autumn is here as my dogs have recovered from their summer lethargy and are frantically tying to destroy my garden in search of mice and voles. Dry stone walls like the one above, large trees and favourite shrubs are all fair game and the three dogs have the combined horse power of a mechanical digger. Being all or part border collie they are very obedient and respond immediately to the command to stop. However, this is defined as ‘until her back is turned’ which makes it impossible to focus on anything for very long. I have learned that it is useless to repair the wall shown above until the creatures have moved on to a safer home although I do try to keep refilling the holes around the trees. A detached observer would conclude that I must have little else to do with my time. 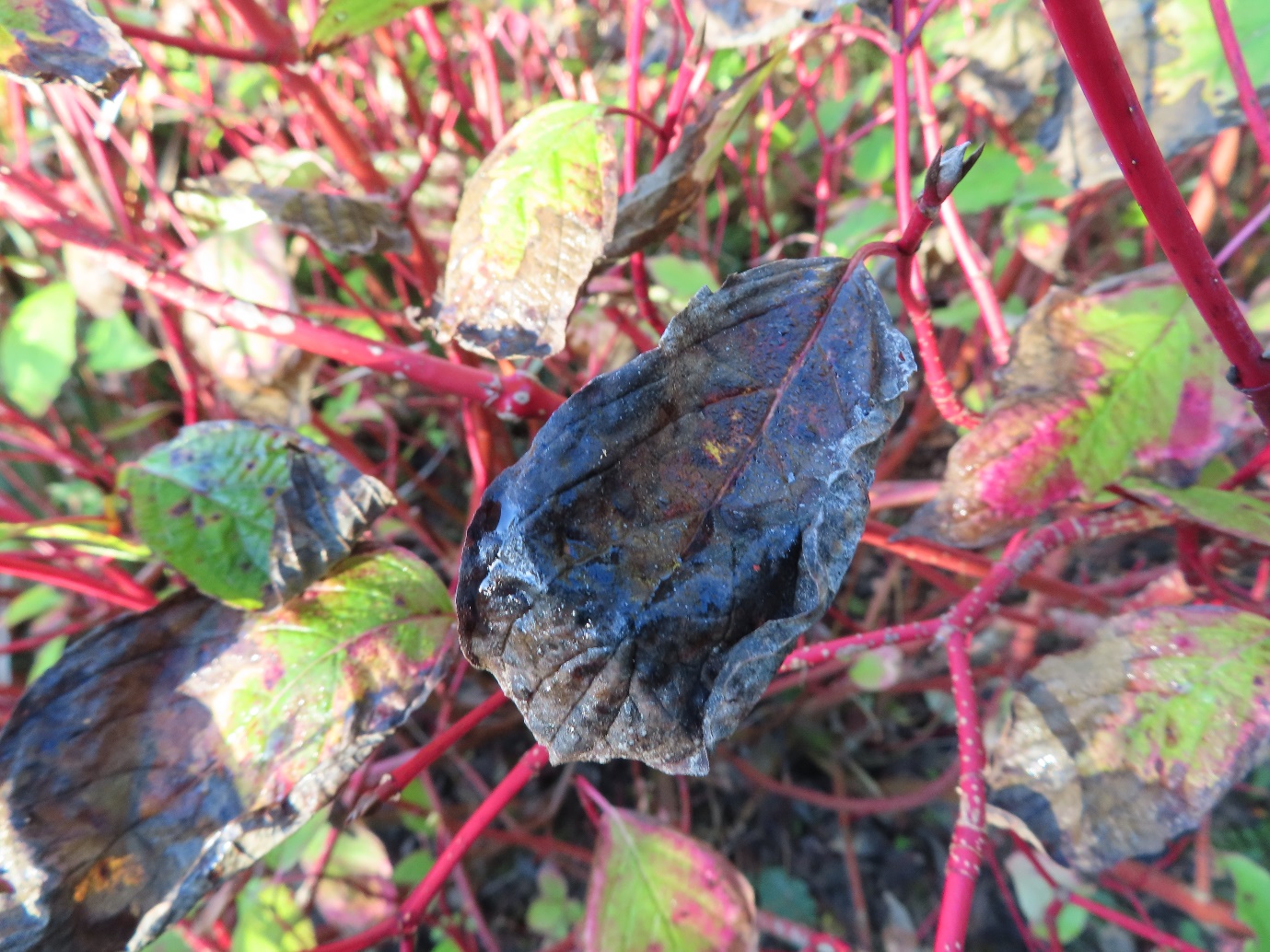 What a beating the garden has had this year. Cold salt-laden gales followed by a drought followed by warm salt-laden storms. The east winds are proving to be the most destructive here and much of the garden now looks battered and bruised. Black and brown are the predominant colours. This dogwood is usually gleaming red and soft green but not one leaf escaped the salt and it won’t recover this year. 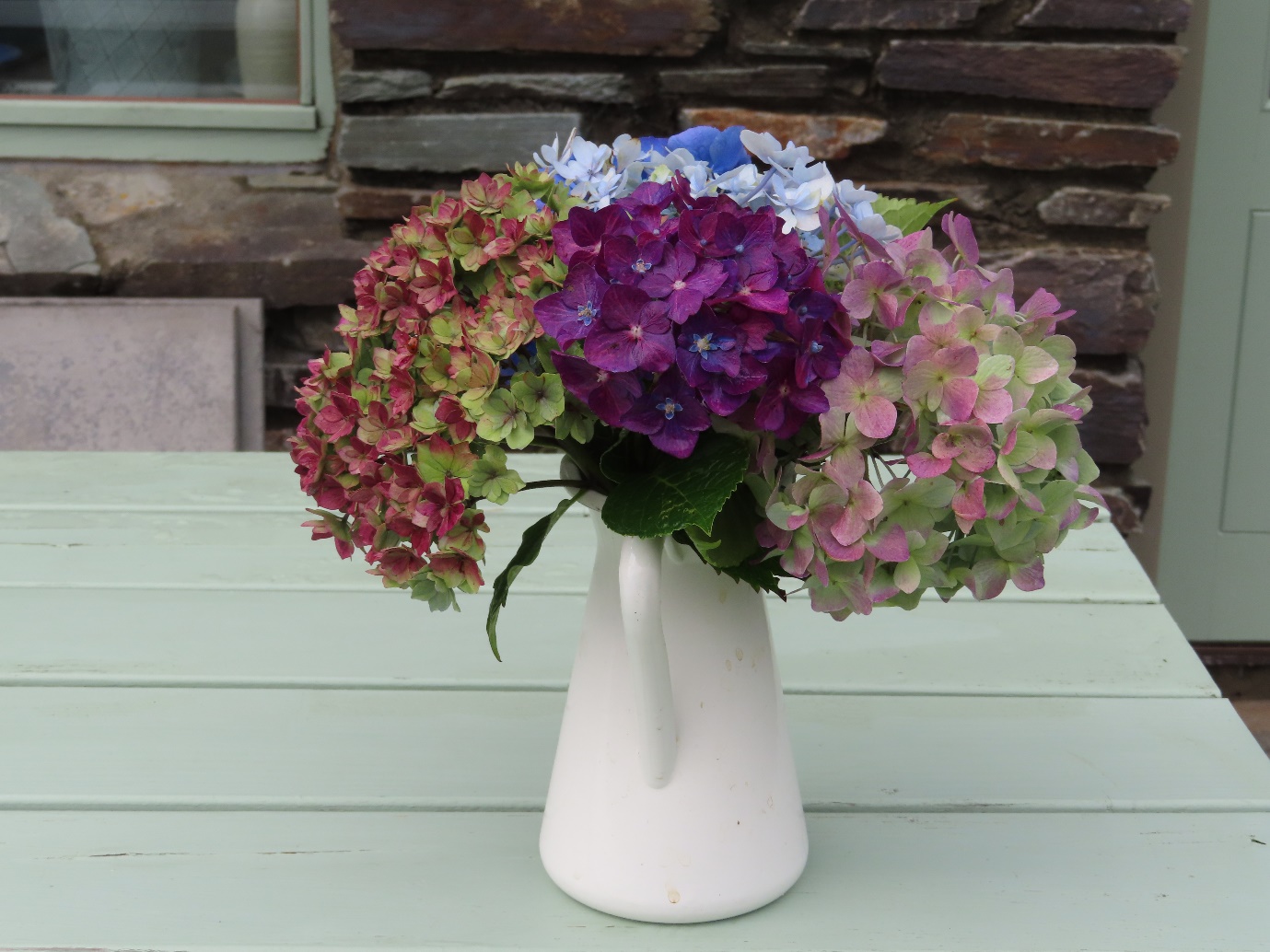 I have been cheering myself up by trying to find the few perfect hydrangea that are left throughout the garden. It is amazing that a few bushes seem to have felt no ill effects although I am certain that a few Madame Emile Moulier that have had to compete for water are now dead. 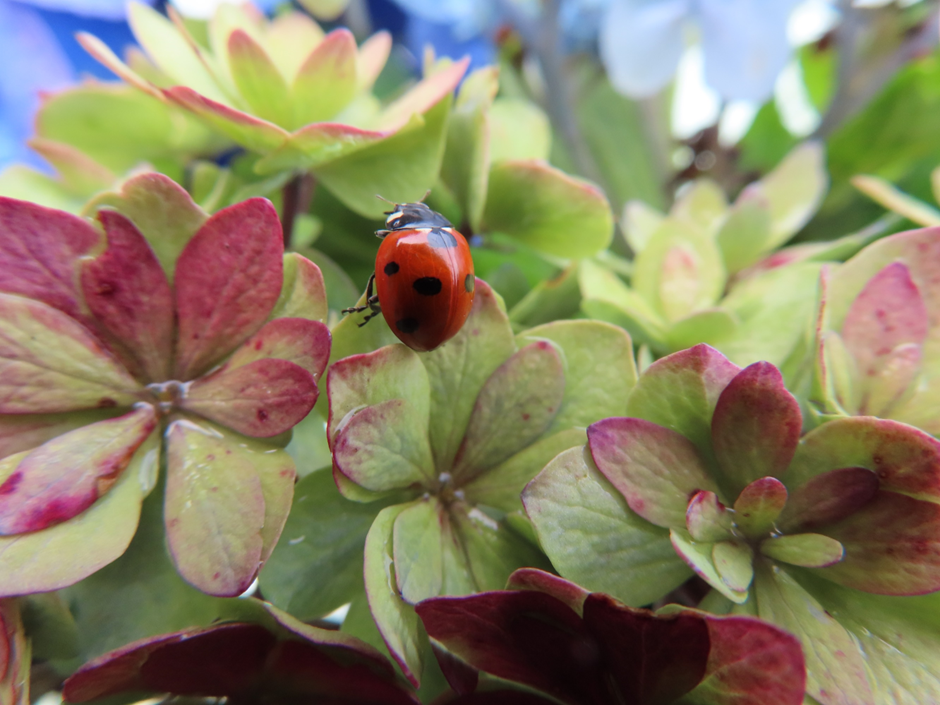 The plants may have suffered, but the wildlife seems to be doing well this year. I have seen more ladybirds than ever before and like to think that they have benefited from the dead stalks and twigs that I leave them each year for their winter shelter. 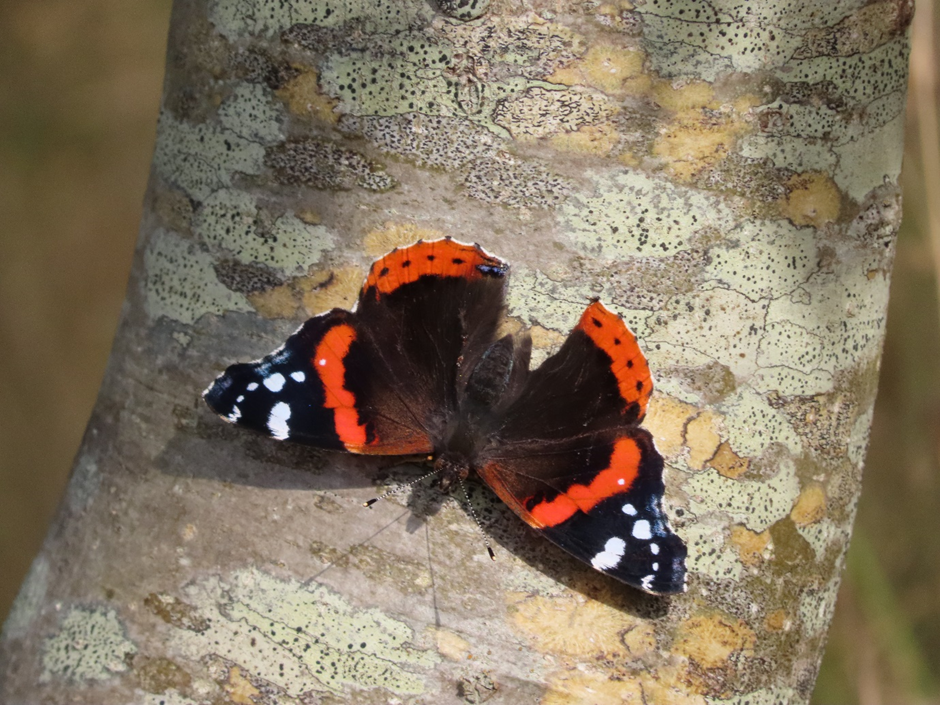 To my surprise butterflies are still evident in the garden. The Red Admiral was the first to arrive and it looks as if it may be the last to leave. This is resting on the trunk of a lichen covered ash tree. 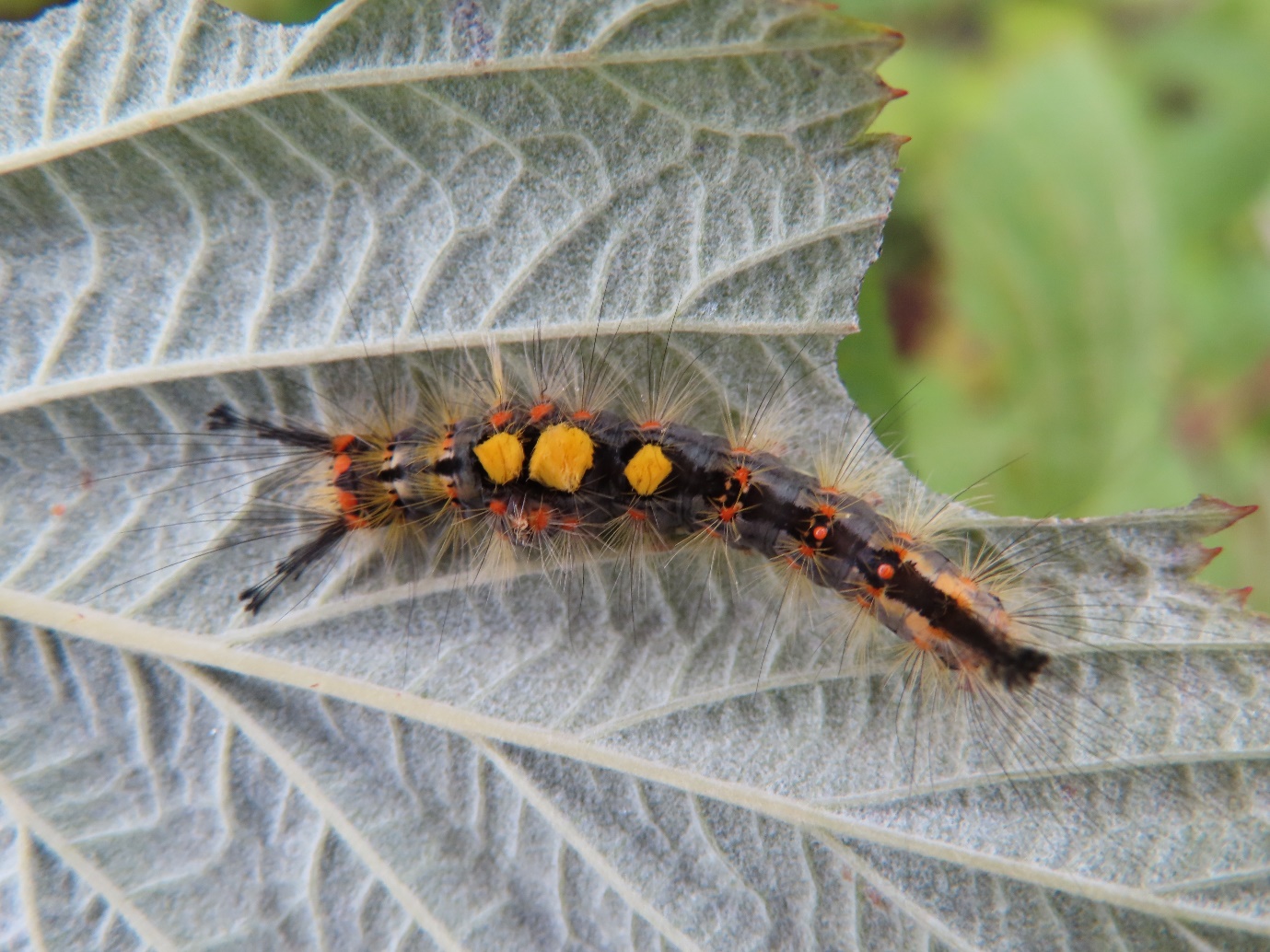 It always amazes me how something so dramatic can turn into something rather mundane. I think that this is the caterpillar of the Vapourer Moth Orgyia Antiqua although it has only three yellow tufts not four. I found it on a raspberry leaf which it seemed to be chewing judging by the nibbled edge on the right of the photograph. The moth itself is much less dramatic although I have only seen it in photographs. 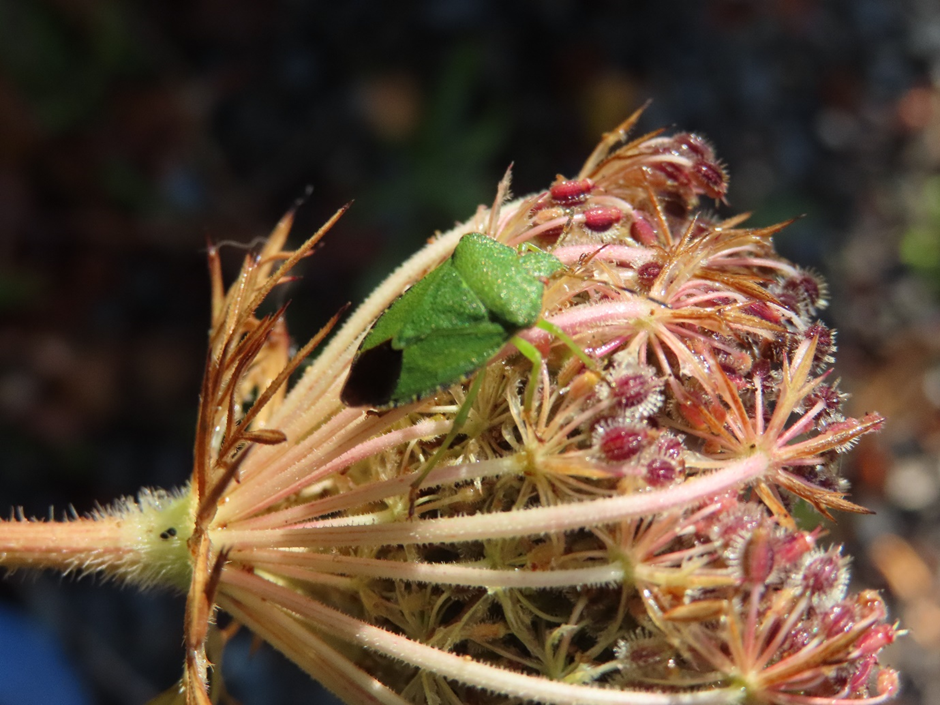 The Shieldbugs are now maturing in the seedheads of the Sea and Wild Carrot plants where the nymphs have been for some weeks. Usually when this happens, they move on to other plants and are much more difficult to see. 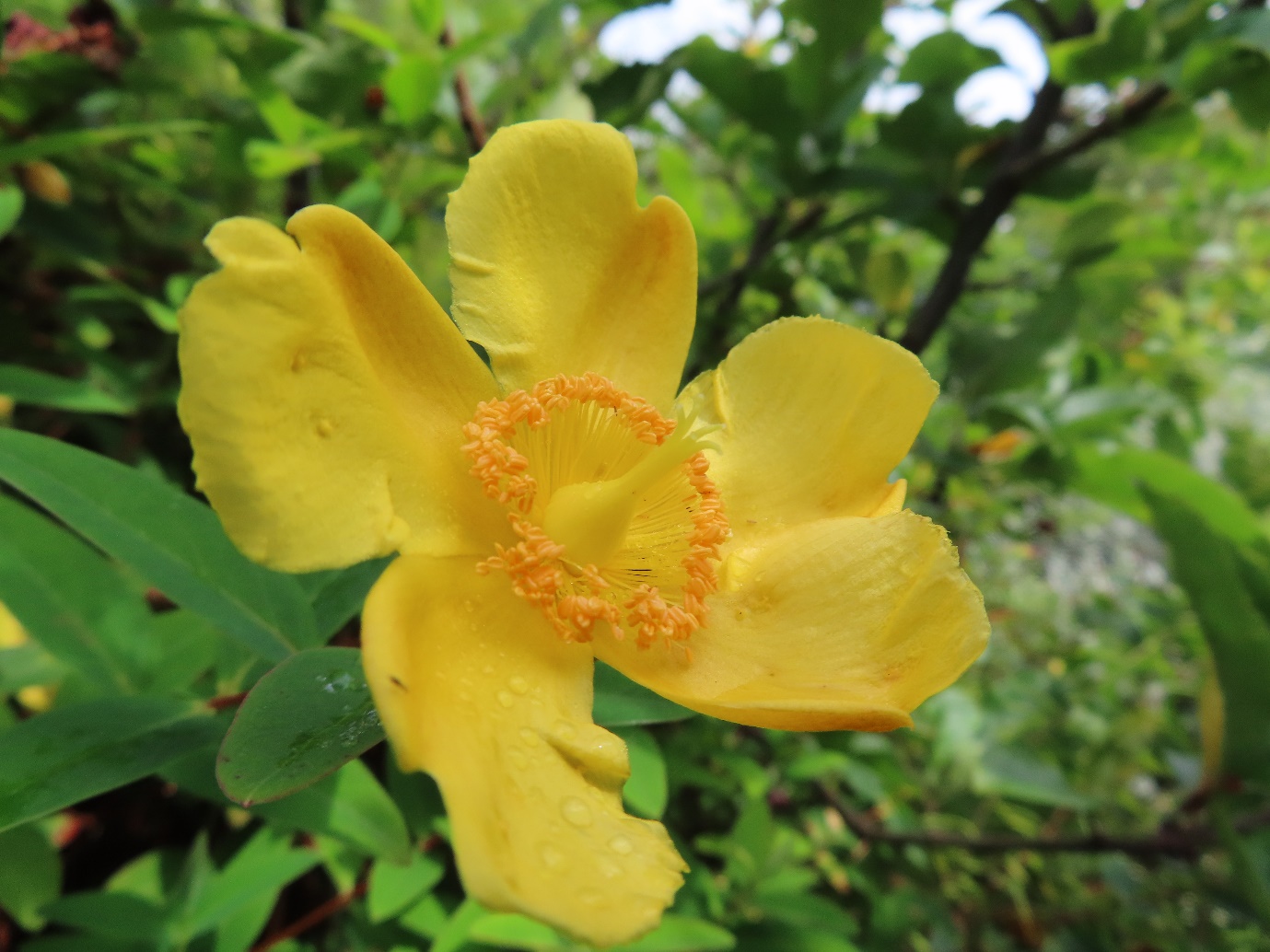 The Hypericum is the perfect example of the differences in how the shrubs have reacted to the heat this Summer. This variety Hidcote still looks green and healthy and the flowers are also in good condition. 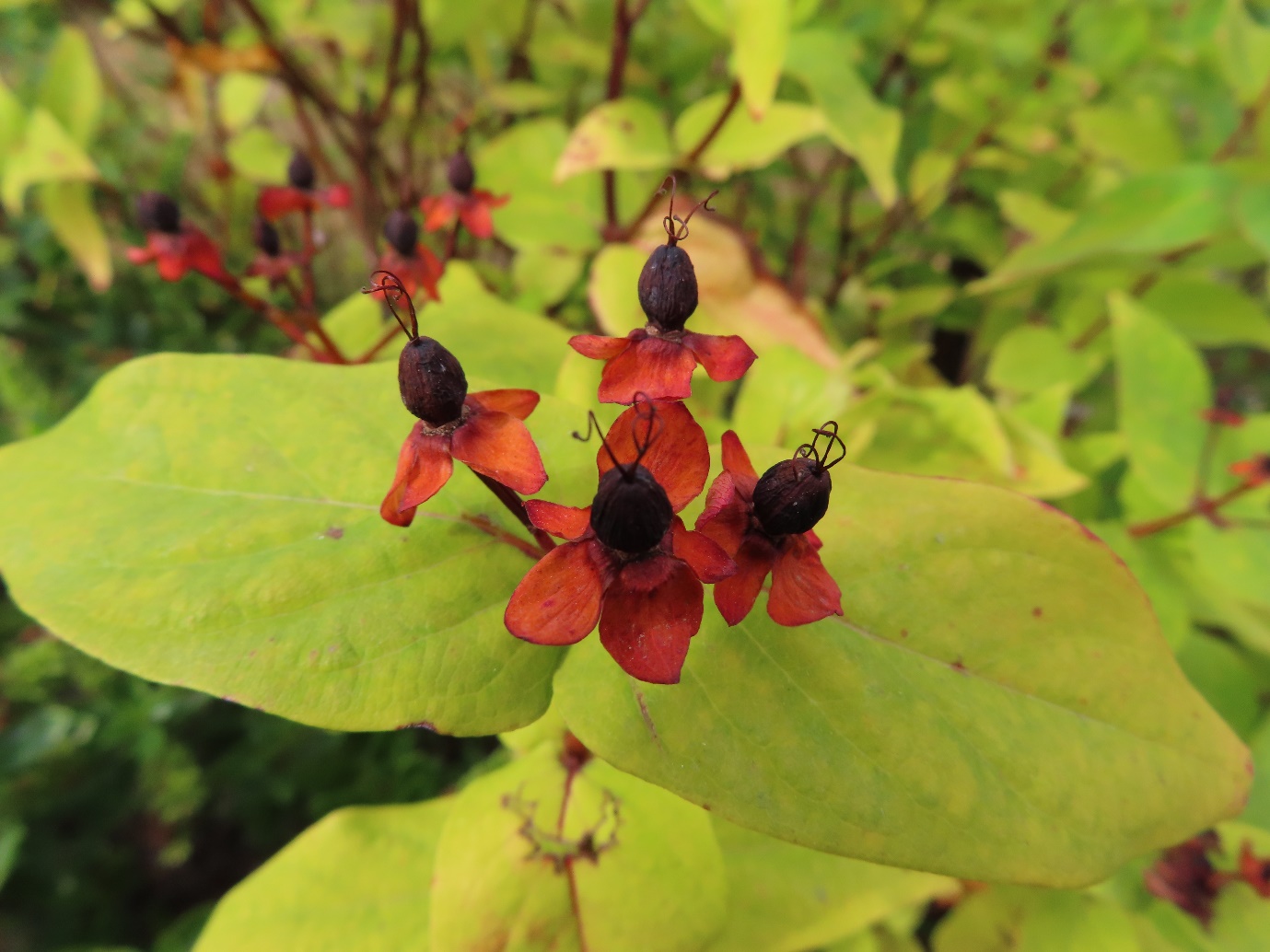 In contrast, this Hypericum has retained very few leaves during the drought and while the colours of the seeds are more attractive than usual, they are very burnt and the poor plant is obviously suffering. 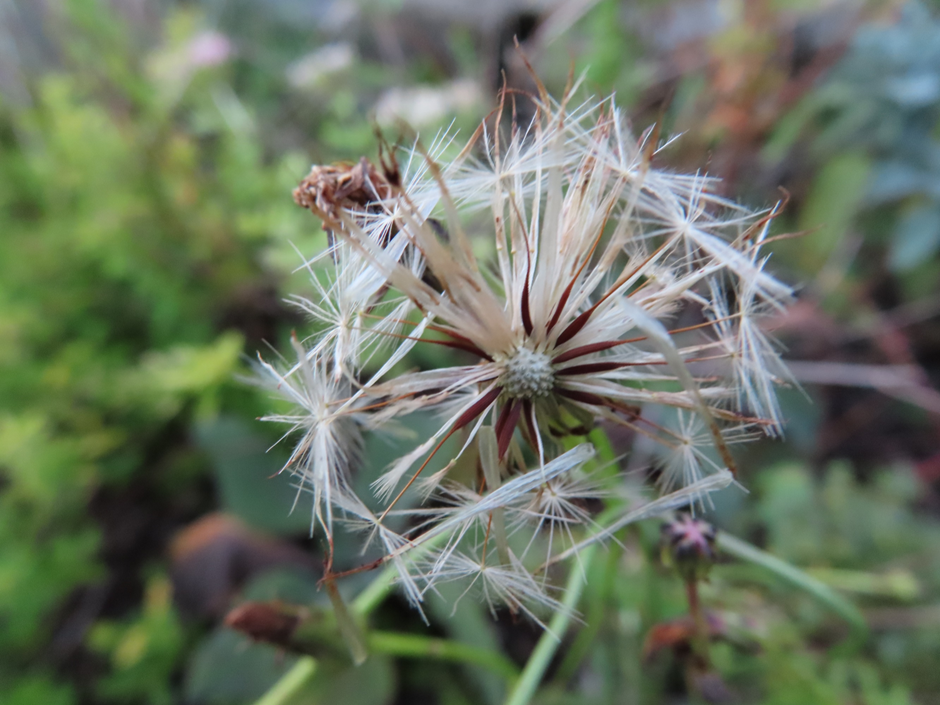 Even if I am not happy with the state of many of my shrubs the wild flowers continue to thrive. The Autumn Hawkbit has taken over in the areas where the grass still appears to be dead and is attractive throughout its life cycle as well as reportedly containing vital vitamins and minerals. 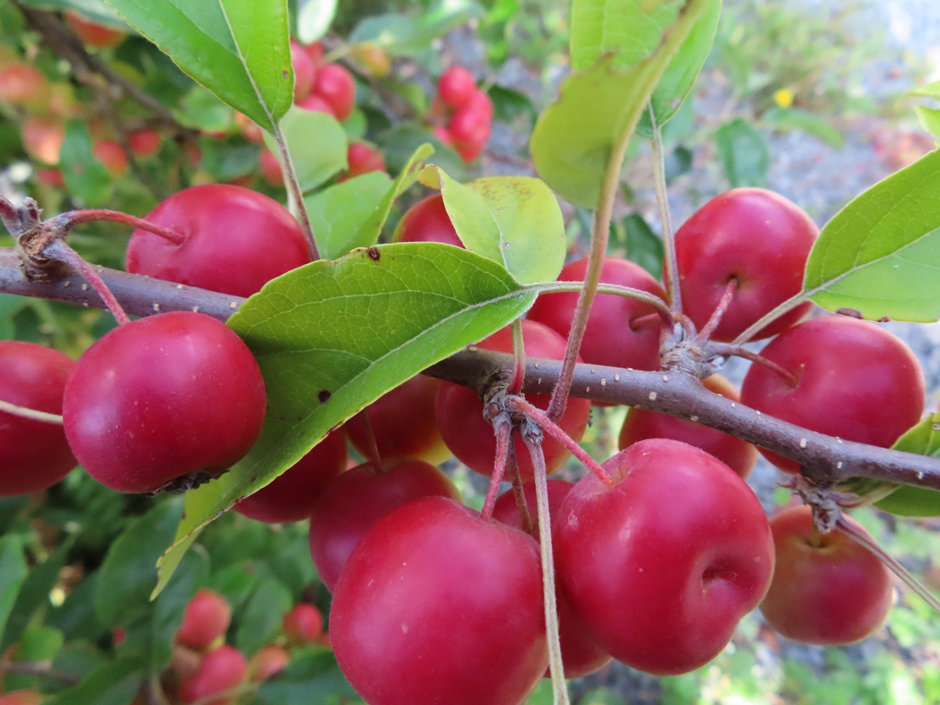 I have four or five different varieties of crab apple trees which have done very well here over the last few years. However, with one exception this year all are bearing tiny nut like apples which are unlikely to come to anything now. This variety Malus Gorgeous on the other hand is looking very healthy and the tree is dripping with apples. Time for some cordial. 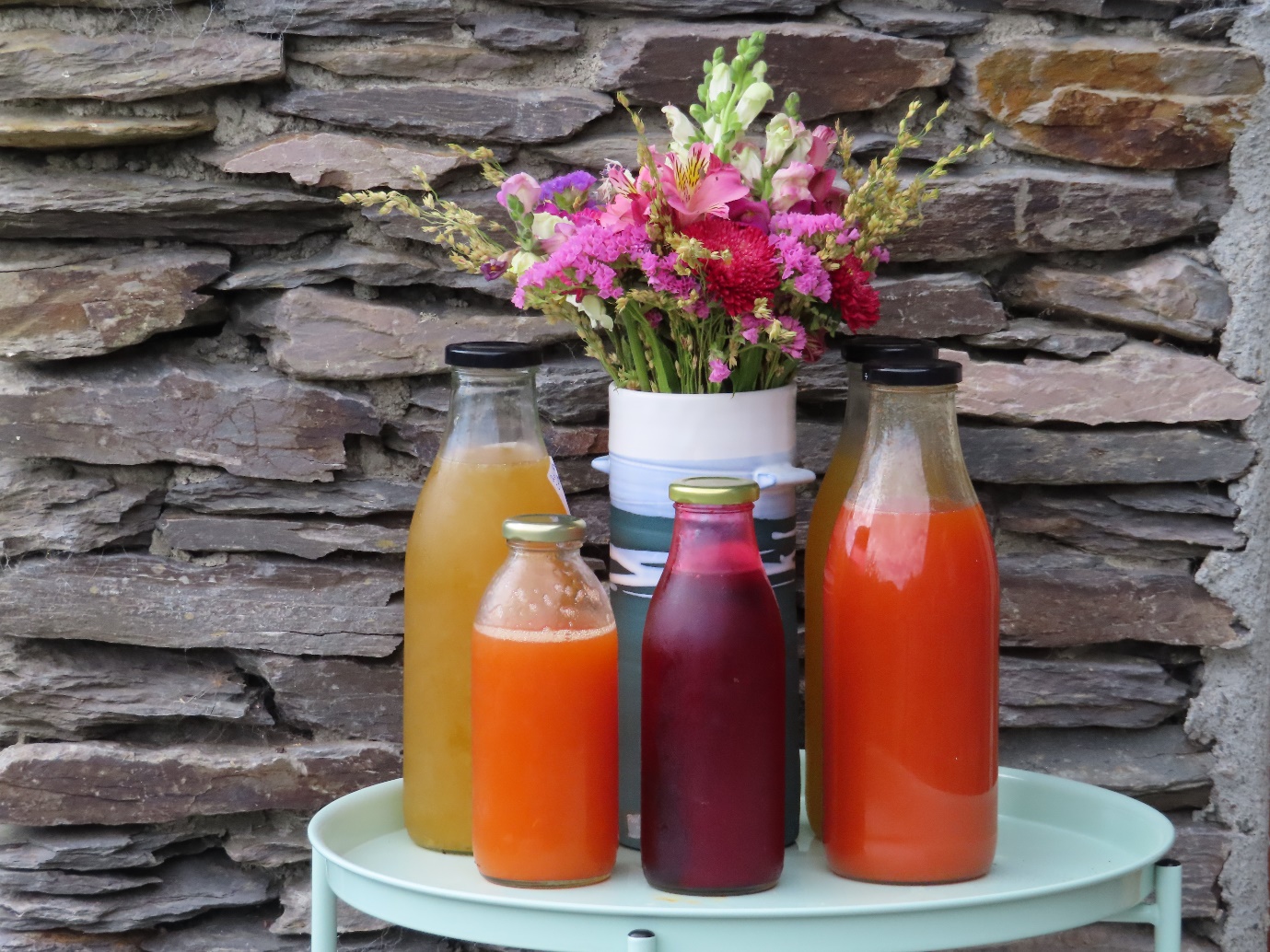 I am very pleased with my cordial/syrup production this year. The mint has been a great success in the elderflower cordial and the Blackcurrant syrup is perfect. I always have a hug crop of rosehips but unfortunately this year most went from almost-ready to over-ripe. Two litres is all that I managed to salvage. 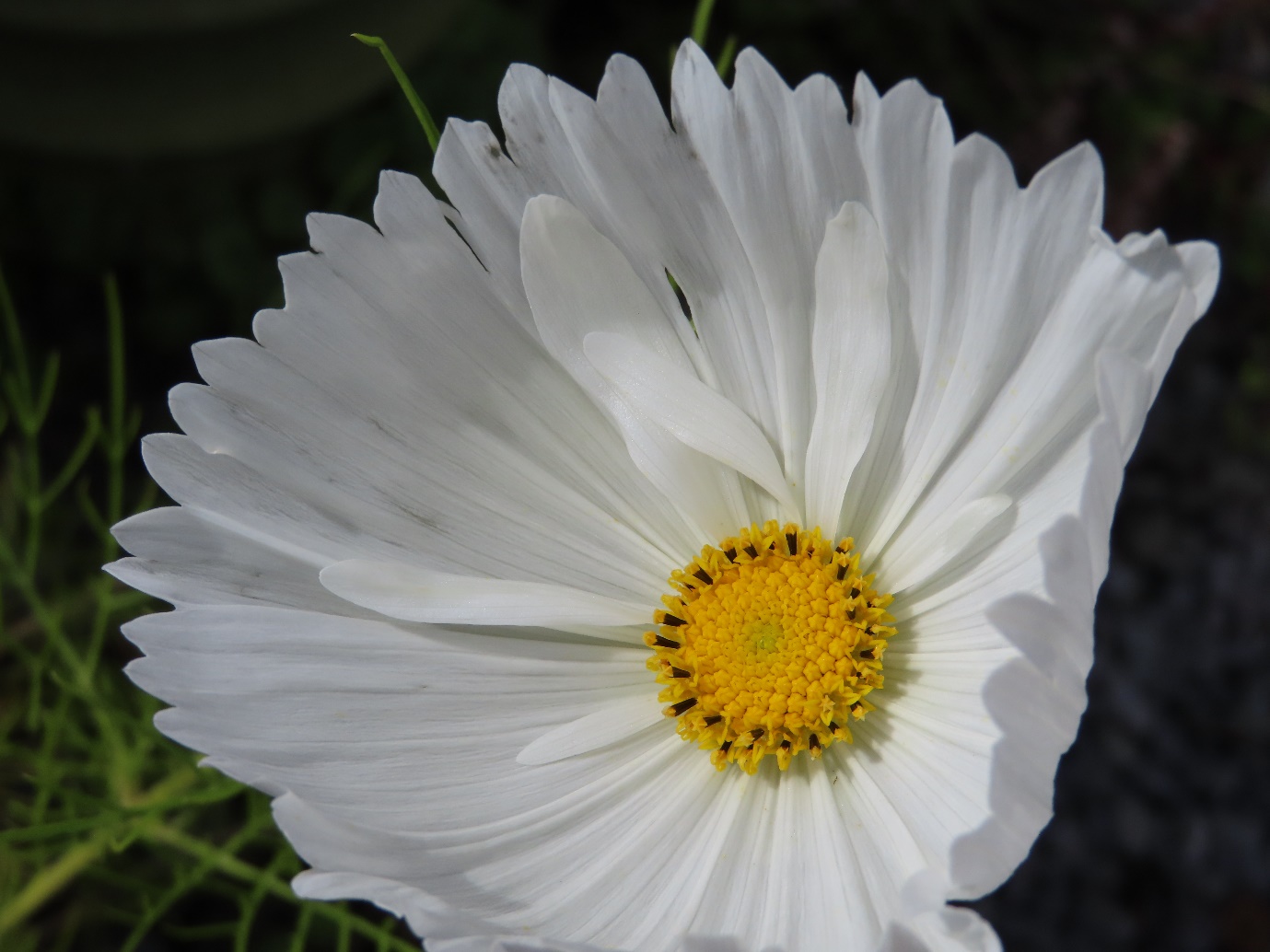 I am not a great lover of annuals as I feel that they take up too much time for such a short life. However, I was taken with this white Cosmos ‘Cupcakes’ which has just started flowering and may even grow it again next year. 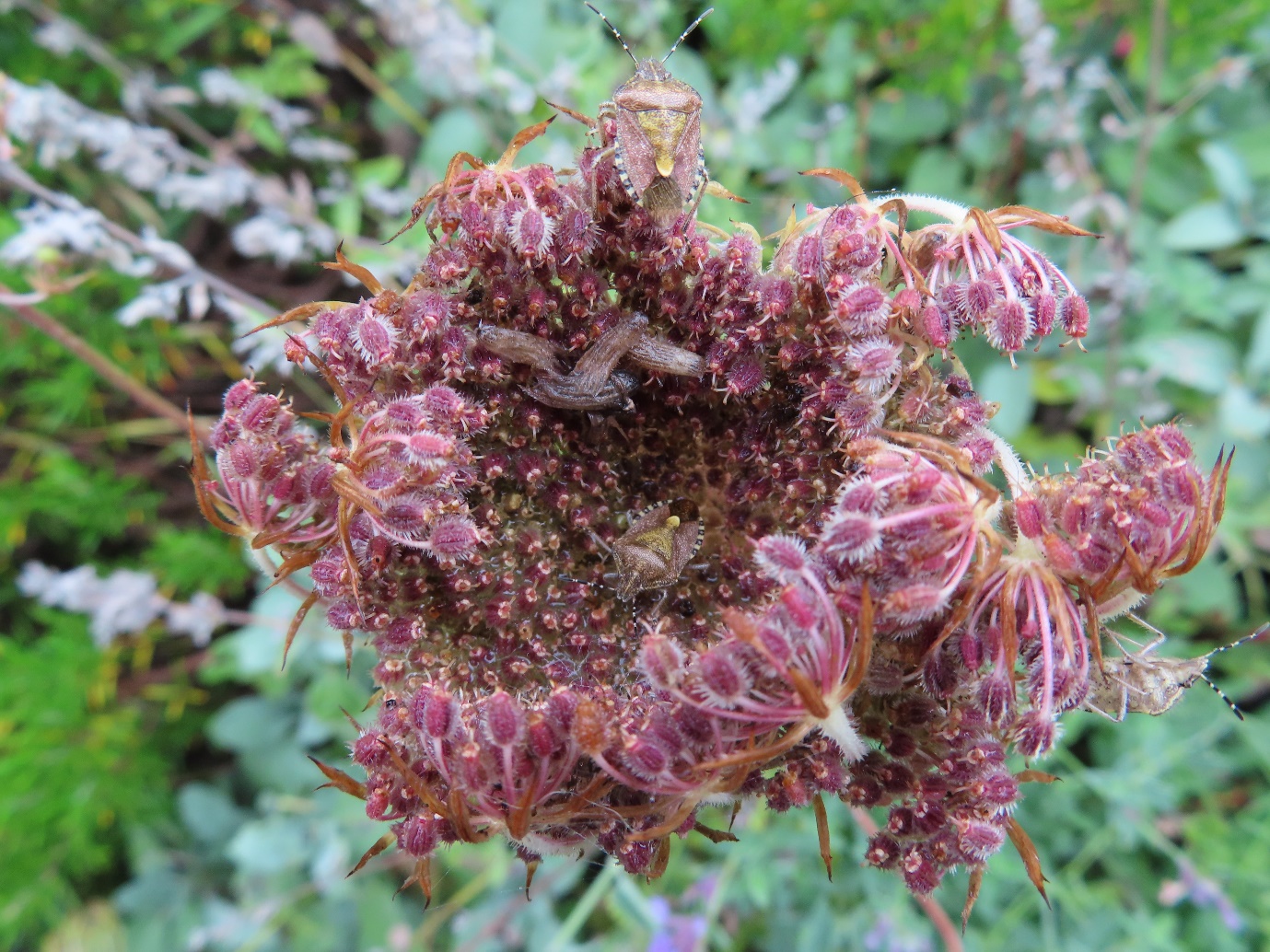 I am constantly fascinated by the Wild and Sea Carrot as they provide interest throughout their whole life and seem to love my garden. This could be used in a quiz ‘spot the three Hairy Shieldbugs’. These seed heads offer the perfect shelter and disguise for young insects and I enjoy checking them each day to see what treasures are in store. 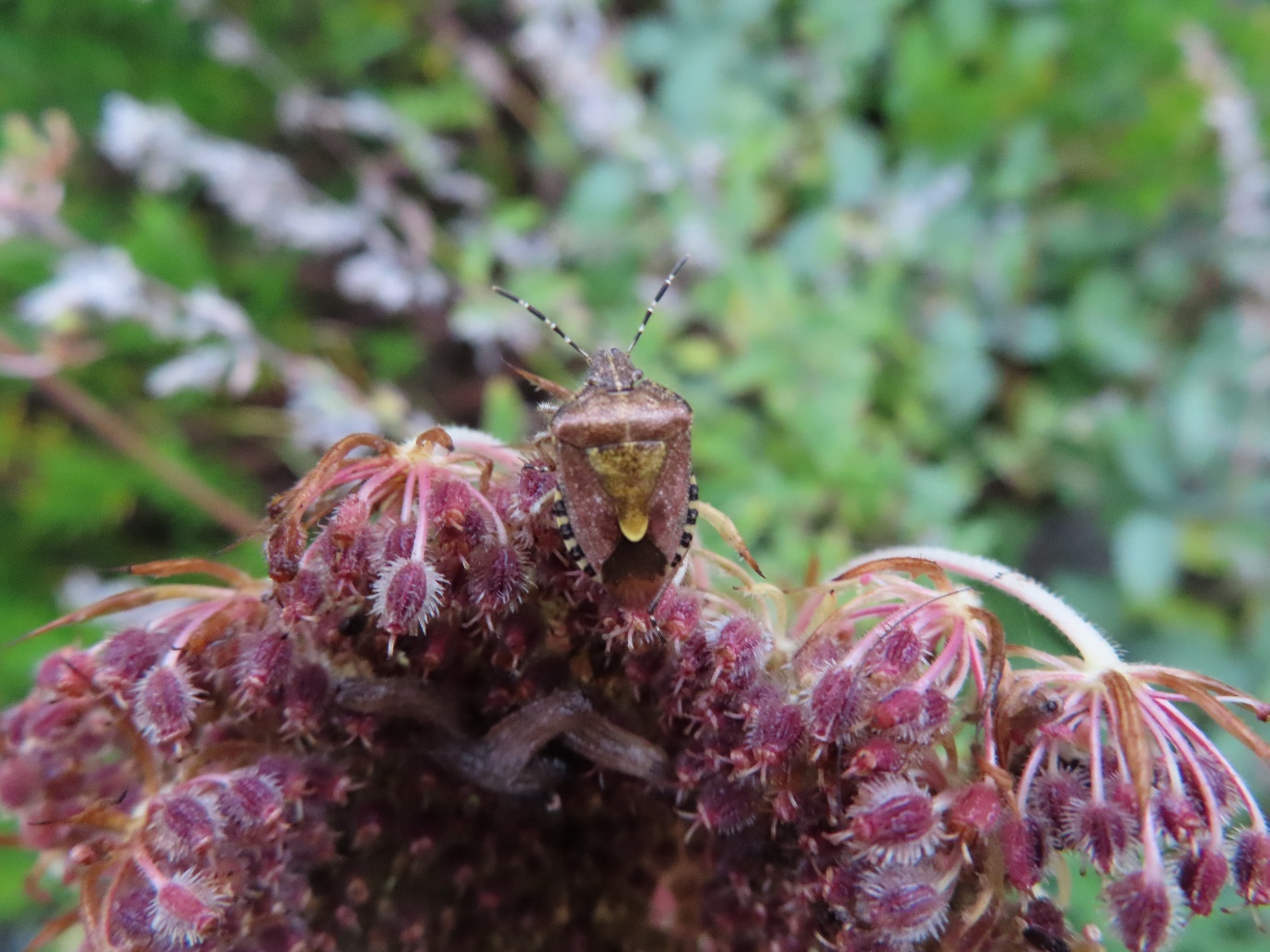