The Aftermath of Storm Francis 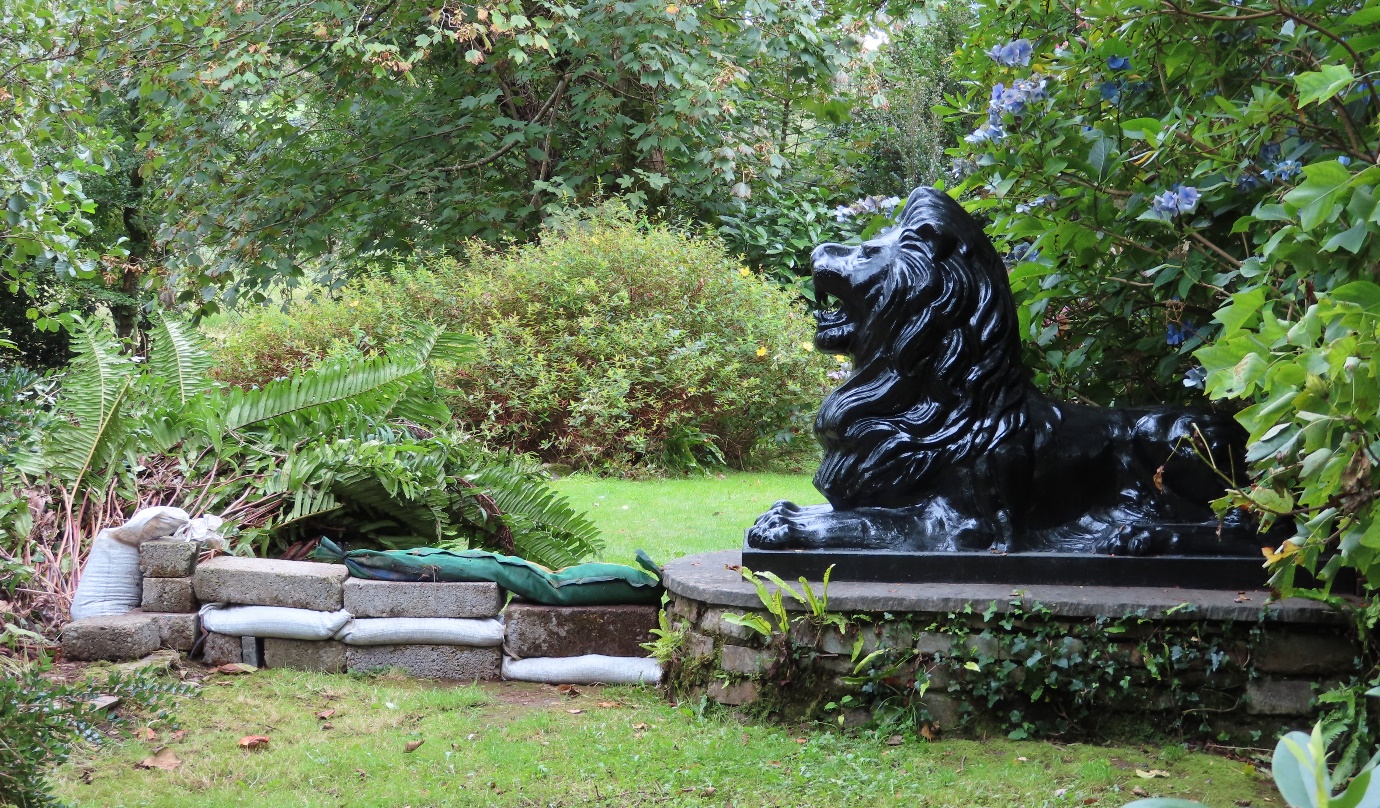 I finally managed to visit one of the mature gardens on the West Cork Garden Trail shortly after storm Francis moved away from this area. Started thirty-one years ago by Eugene and Hazel Wiseman, Carraig Abhainn is hidden behind some houses in Durrus and is approached by a narrow lane which gives no clue as to what lies beyond. As it is in a very sheltered spot, I expected it to have fared better than my own exposed garden, but had not taken the torrential rain that accompanied Francis into consideration. Nor had I realised how close the garden was to a small river. I say ‘small’ but when I visited the river was a raging torrent both dramatic and deadly. The above picture tells its own story. Despite the destruction you could still get a feel for tranquillity that this garden must usually offer especially when it is in the heart of a village. Sculptures and wood carvings are used to dramatic effect and I can’t wait to visit this garden in the Spring when it has made a full recovery. 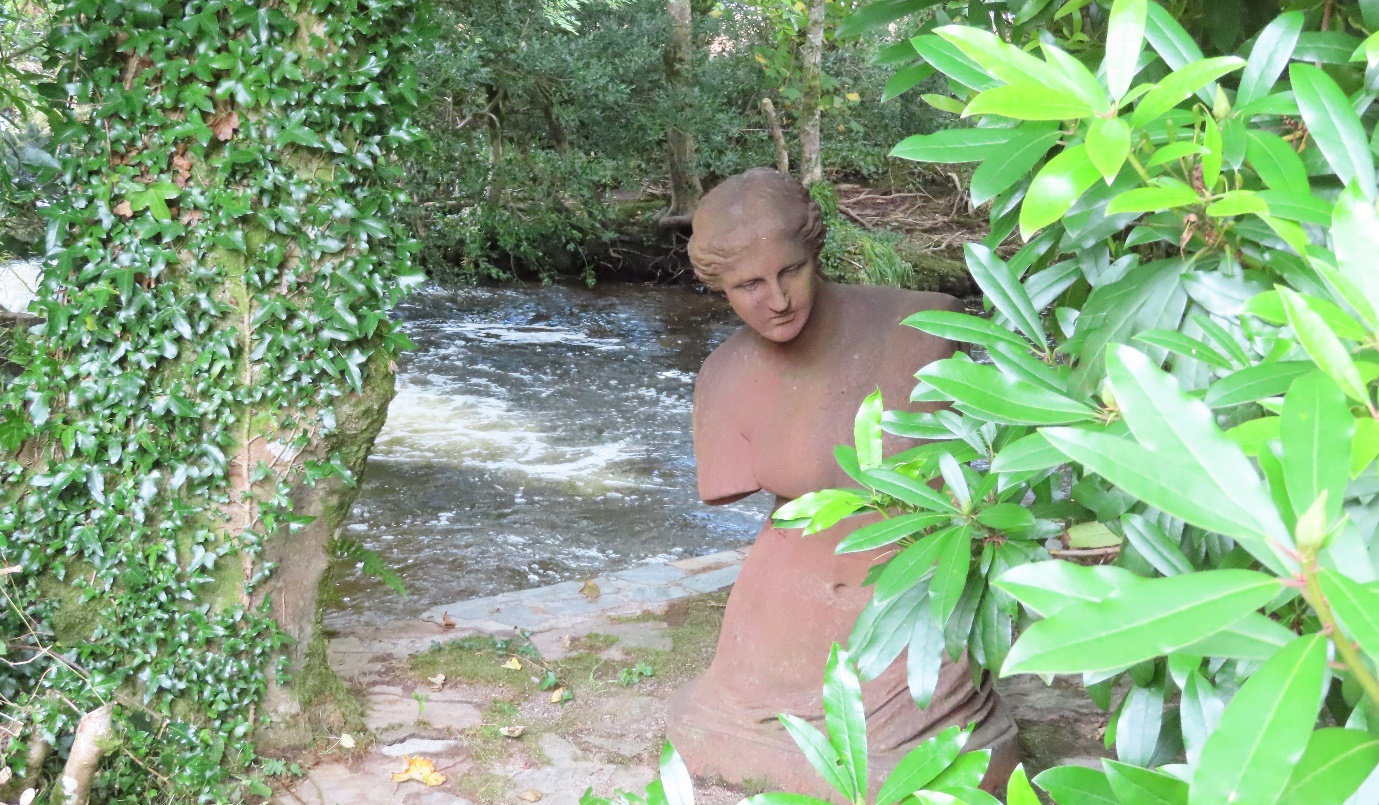 Luckily this lovely piece was untouched by the storm and the river flowing close by. 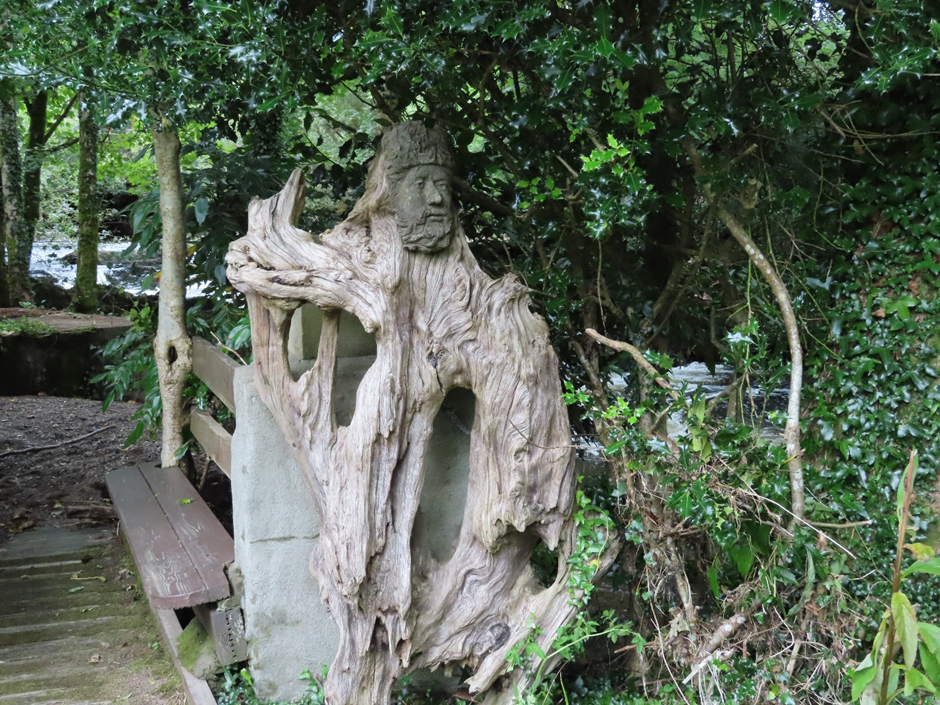 A dramatic wood carving close to the river which was also untouched by the storm.

Back in my own garden Francis has produced some dramatic effects of its own. Despite my focus on tough native plants I still can’t resist the odd gamble when something takes my fancy. Echiums are one such plant and I have seen them grow and flower successfully in walled gardens in this area. Last year I planted four in what I hoped were relatively sheltered places in the garden. The one below was placed in one of the few truly sheltered areas. It is protected from all winds and sunny to boot. The echium survived last winter and I had high hopes for a flower next year. What I had not factored in was the rain that accompanied storm Francis. Like Carraig Abhainn, I had some flooding, albeit in a small area, but it was just where the echium was thriving. 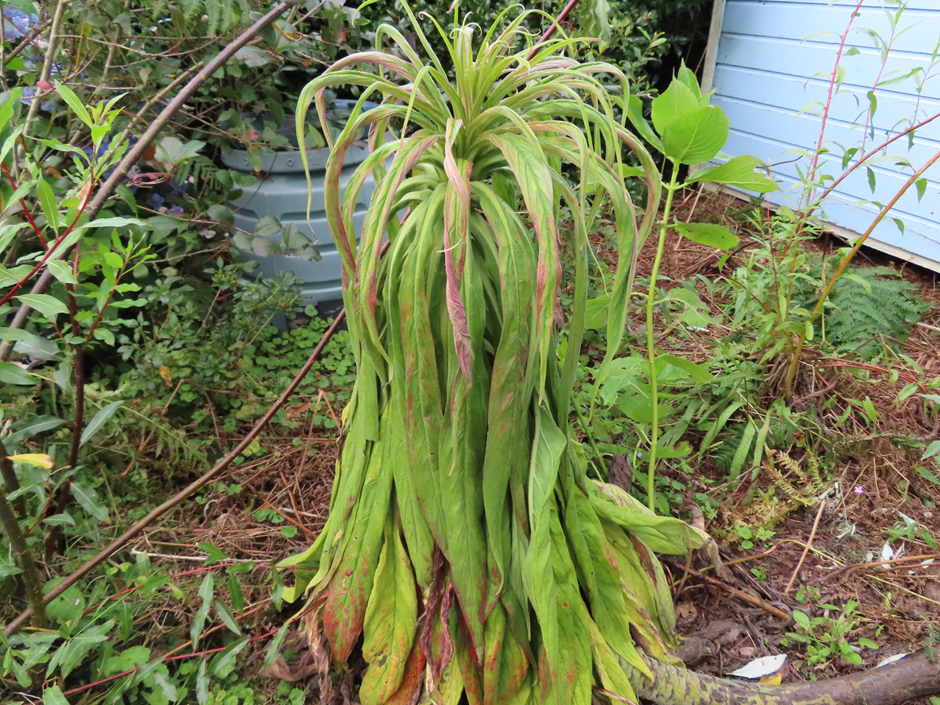 Storm Ellen pushed the plant over but it still looked healthy enough. After Storm Francis it looks more like alien creature from a Hollywood movie. I suspect that it did not like sitting in water for the few days that it took for the water to drain away. I don’t know if it will live but won’t give up hope until the end. Meanwhile three planted in a more exposed area of the garden are looking healthier.

Despite the storms there is some colour in the garden. The Rosa Rugosa Dagmar Hastrup still has a few flowers and a wine, rather than a red, rosehip. 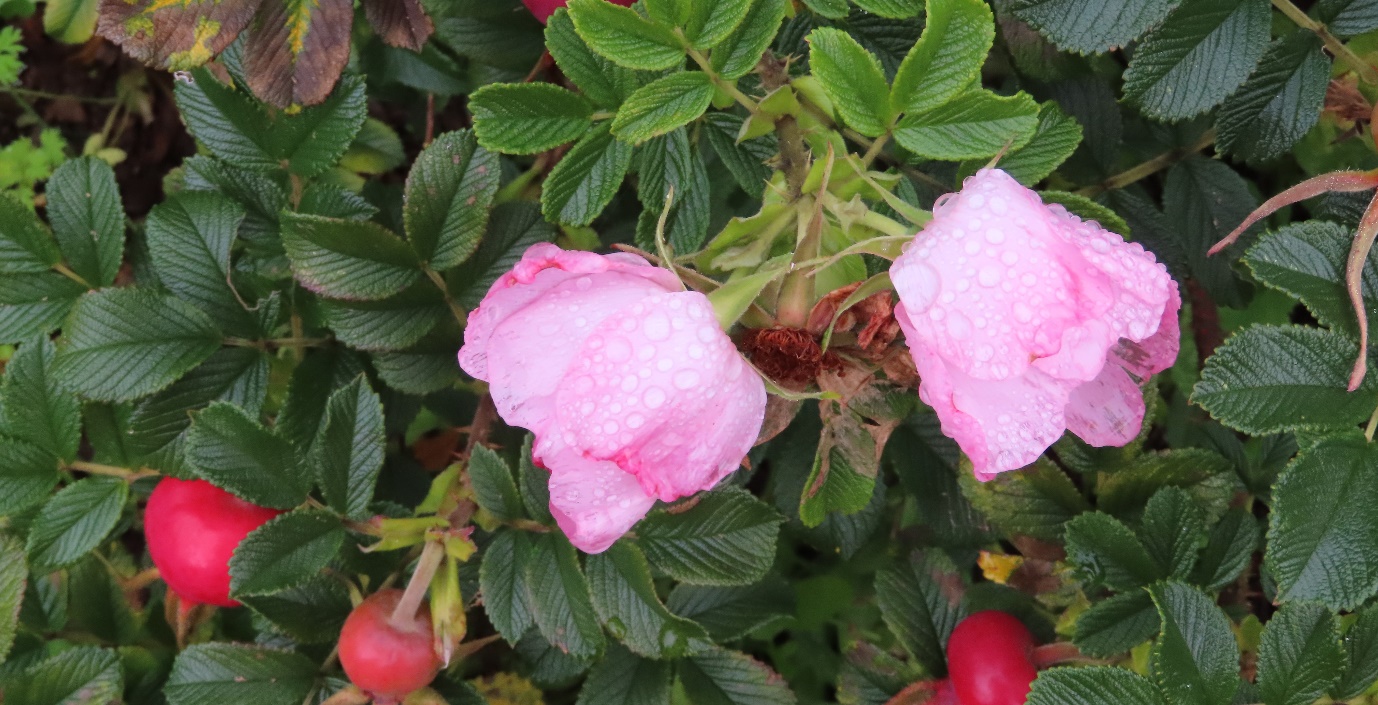 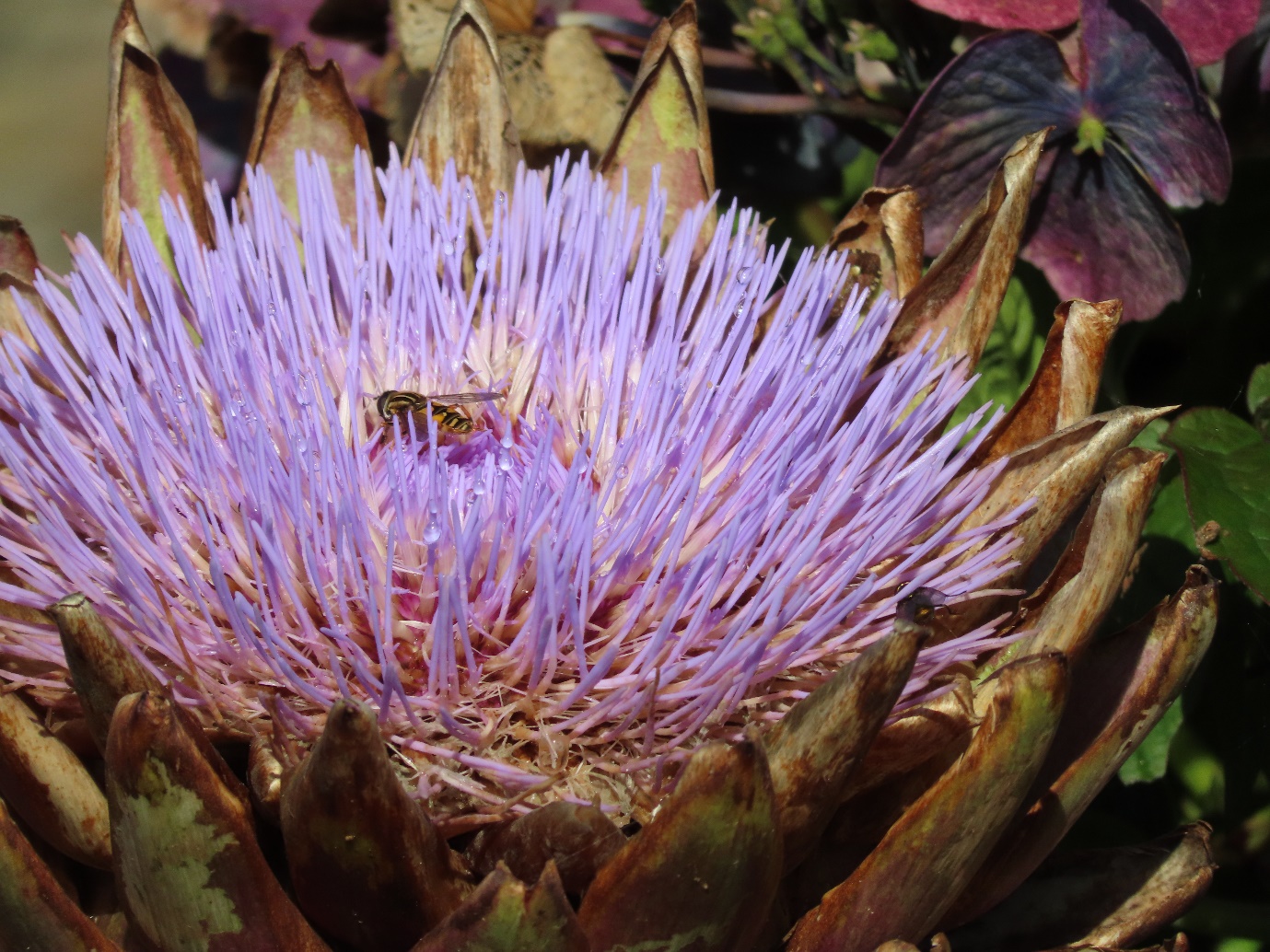 A hoverfly feeding from the flower of an artichoke.

This artichoke plant is several years old and seems to be happy in a relatively exposed part of the garden.

I have been experimenting with using grasses in the parts of the garden that are facing south and have little shelter from the deadly south and south east winds. So far, they seem to be managing well. The flower and seed heads of the Stipa gigantea are very graceful and provide interest all summer. The stems are rainbow coloured in autumn. 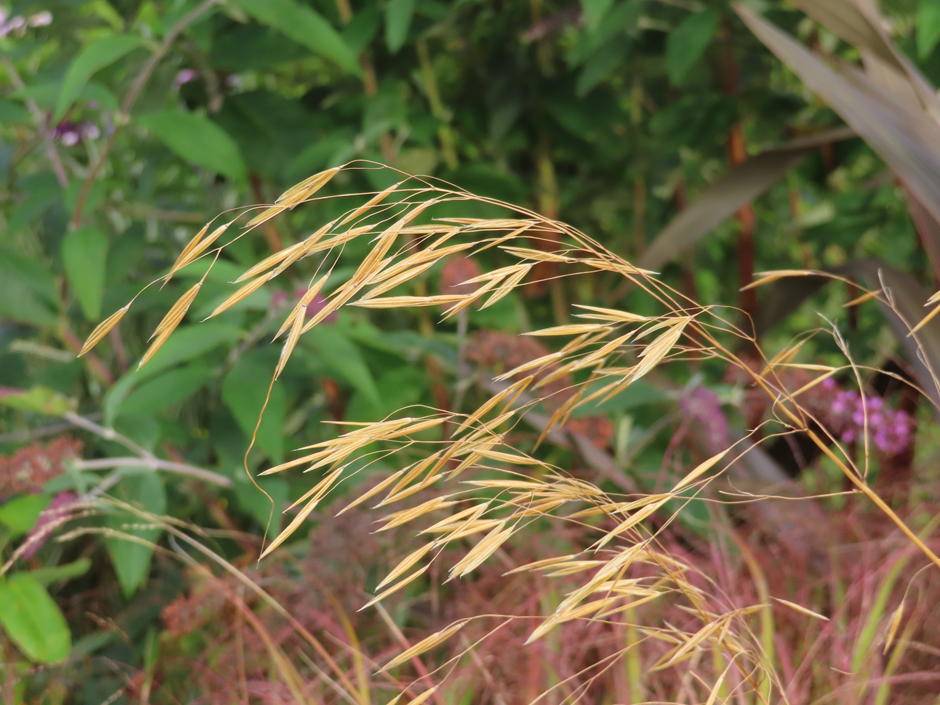 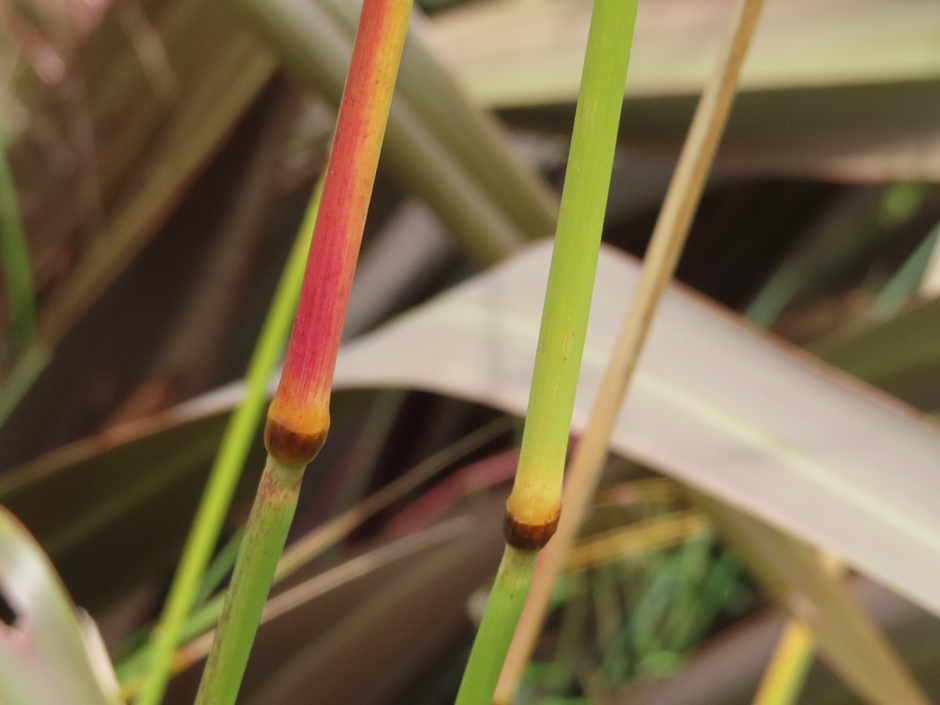 This Stipea arundinacea turns a copper gold and bronze colour in autumn and is a nice contrast with the gigantea. 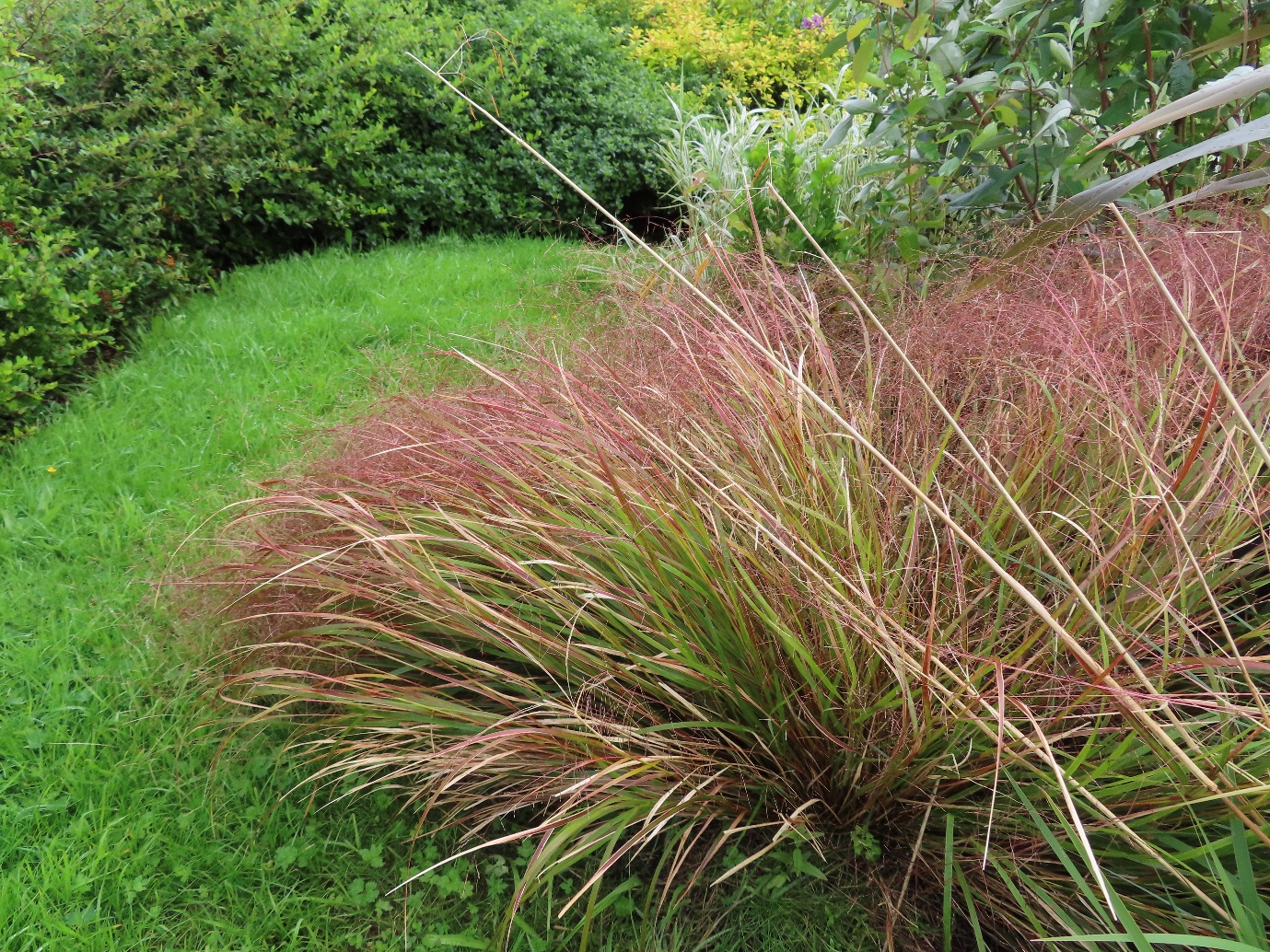 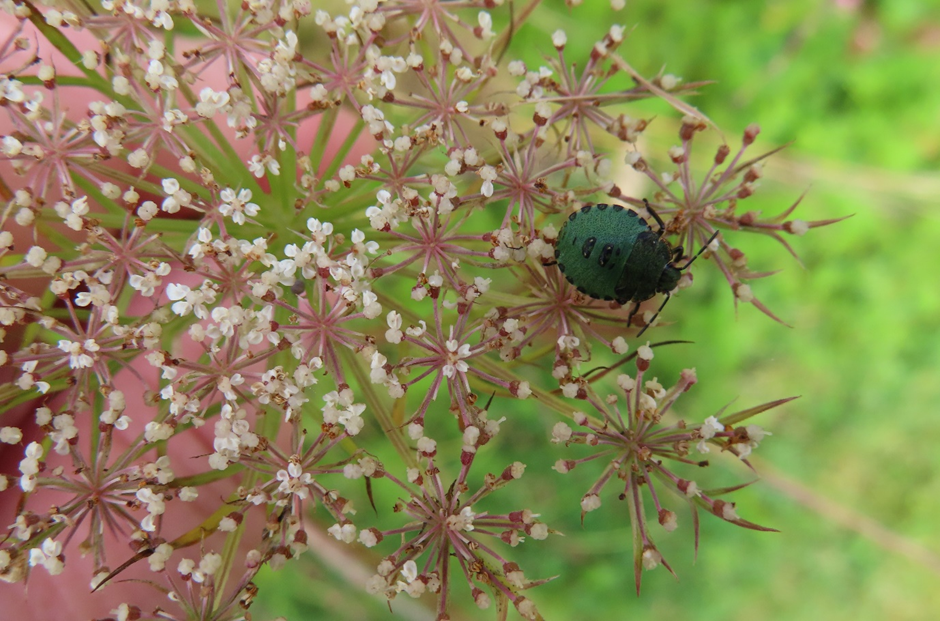 The Sea Carrot flowers have been in evidence all summer and have provided food to a multitude of insects. They are now seeding and have been replaced by the wild carrot above. This is one with a mid-instar nymph of the green shield bug. 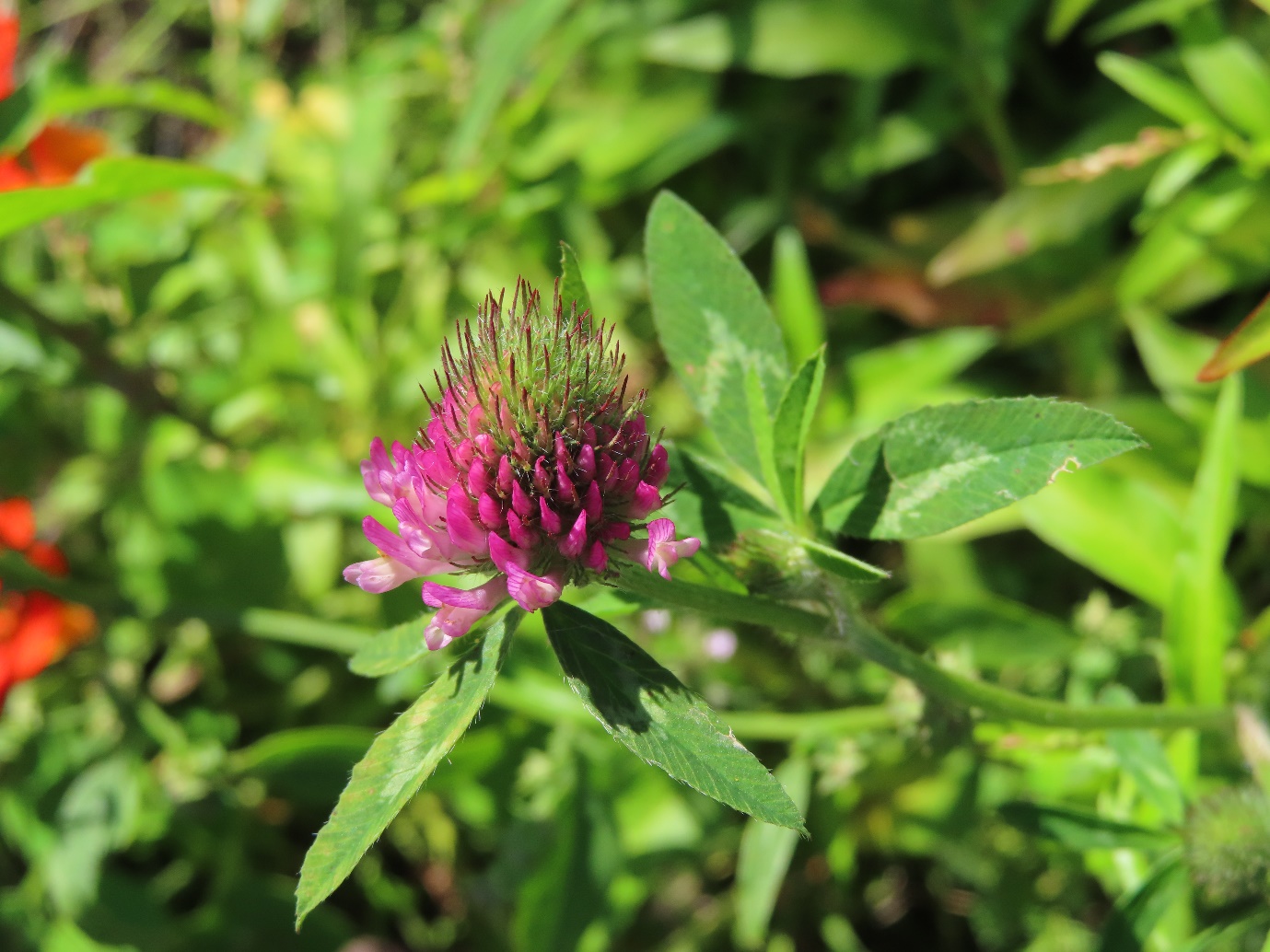 I have never really paid attention to clover until this year apart from knowing that it is a good green manure. So far I have found three varieties in the garden. The red clover has oval leaves with a white v shaped marking. 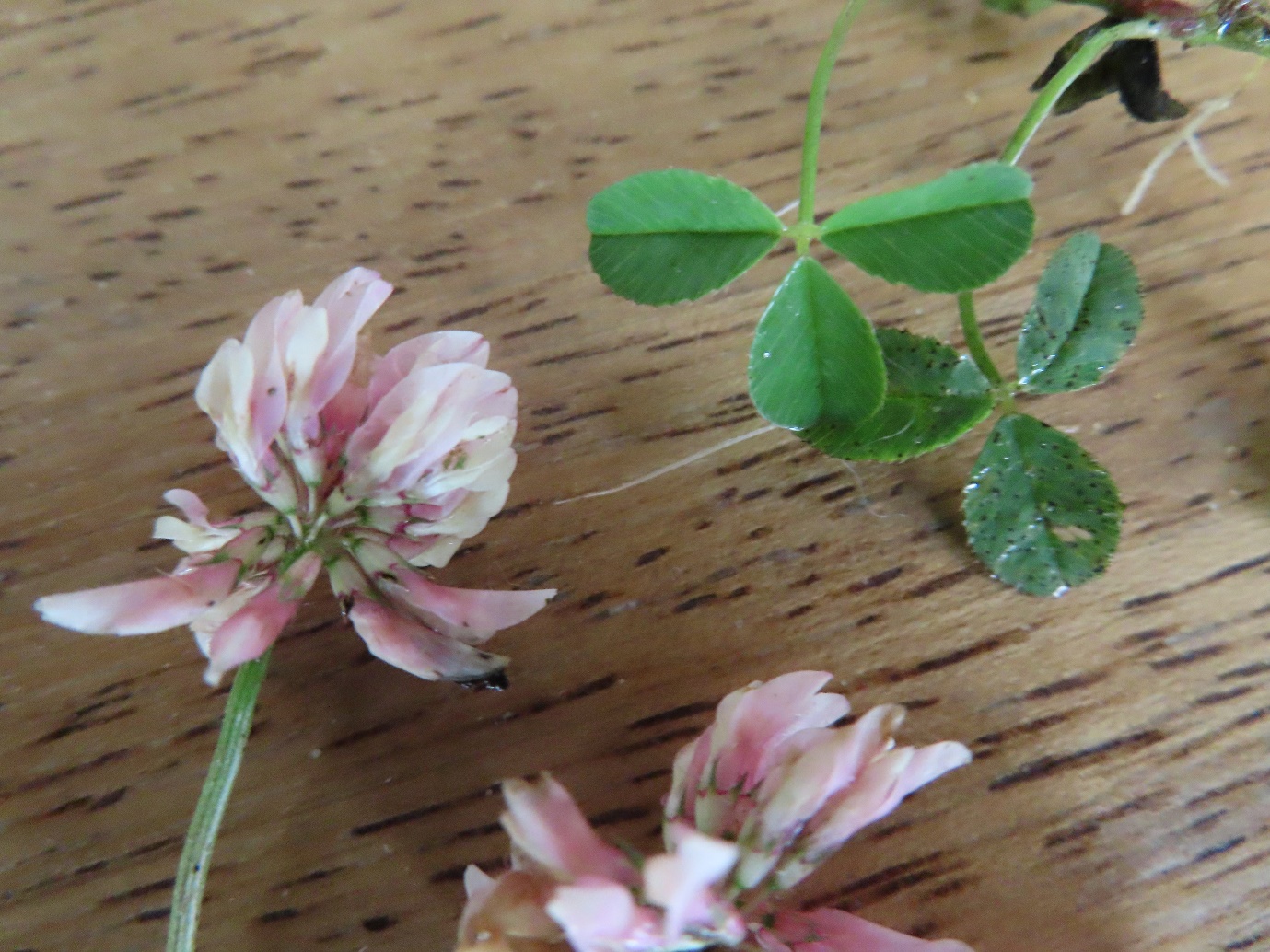 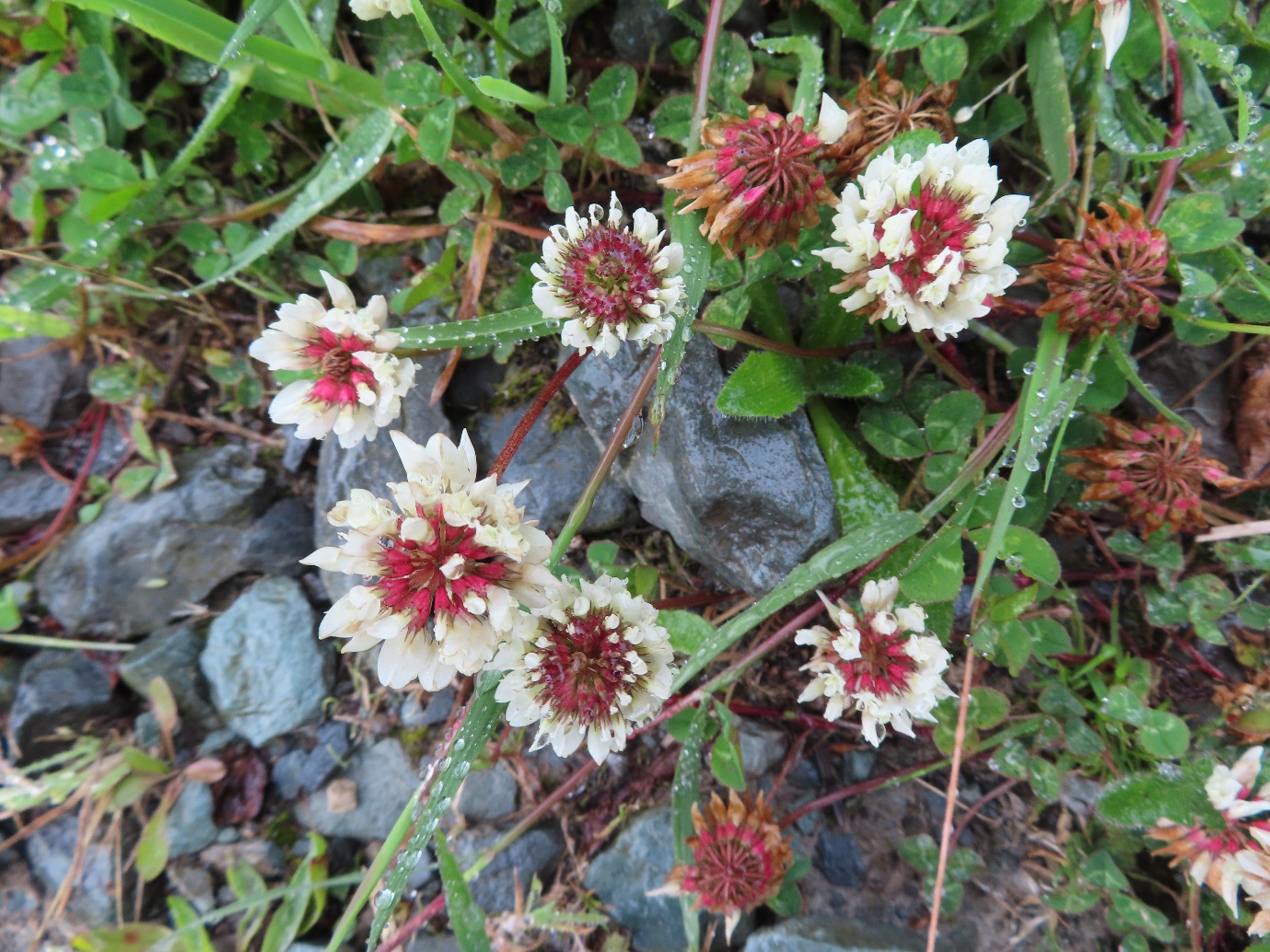 White Clover Trifolium repens. In my garden they develop a dramatic wine colouring as they age.

Most clovers probably arise from cultivated rather than native plants The White clover is an important plant for bumble bees although in this garden the Nepetia Six hills’ giant is still the plant of choice for most of the bees.

Earlier this year I posted a photograph of my first ladybird of the season. Until this week it was also my last. I would have expected many more in a garden that appears to attract a lot of birds and insects and I hope it is not a bad sign. I found this little one just the other day and I expect that it will truly be the last of the season. 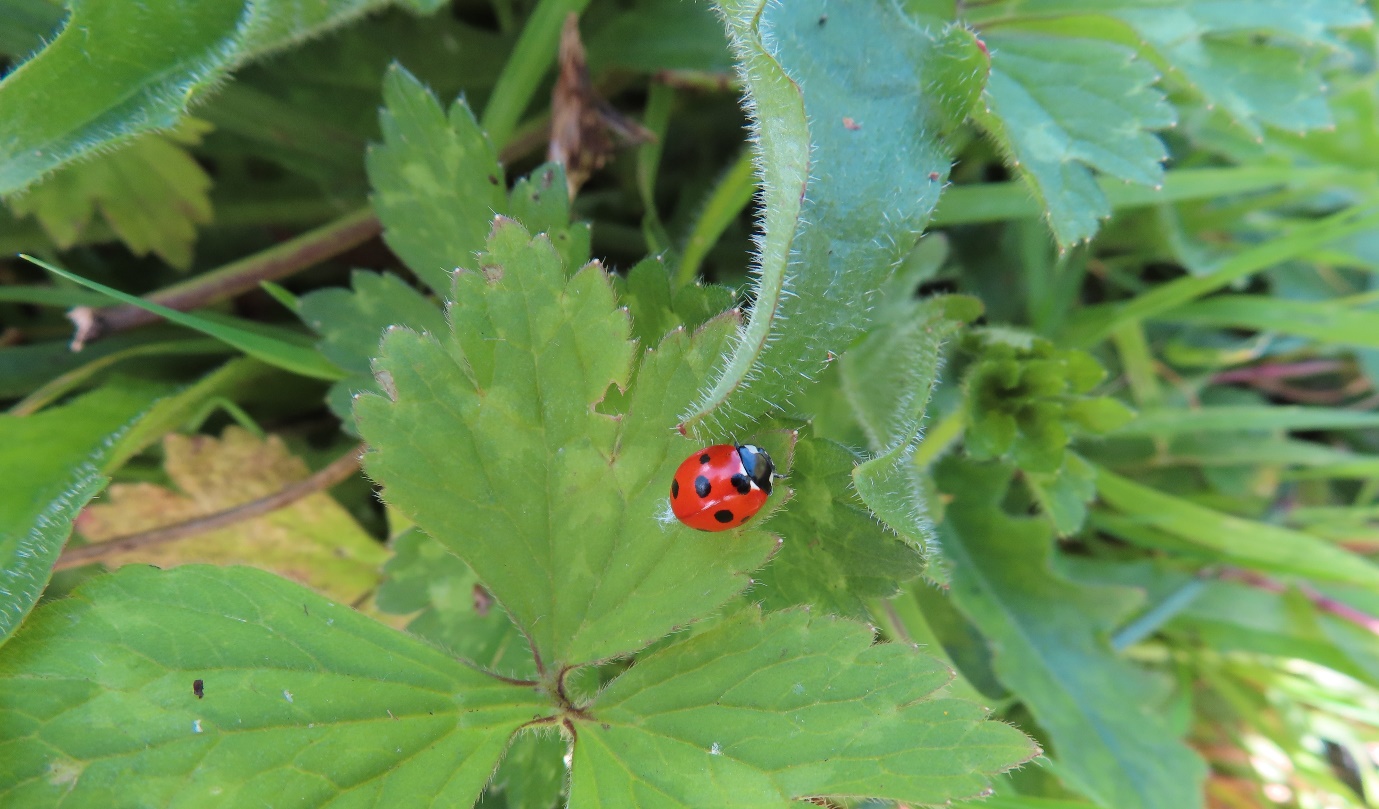 There are parts of the garden where it looks as if winter is here already. Ellen and Francis blasted the leaves off many of the trees and shrubs so I have to remind myself that it is not even mid-September yet. The temperatures have dropped dramatically. Maybe the smaller creatures know something about what is in store for us over the next few months. The mice and voles are already setting up home in the roots of trees and under rocks. I know this because my dogs have started their autumn task of rooting out as many as possible doing the most damage with the least success. I can only hope that my attempts to fortify the house from an invasion will be successful.

One response to “The Aftermath of Storm Francis”