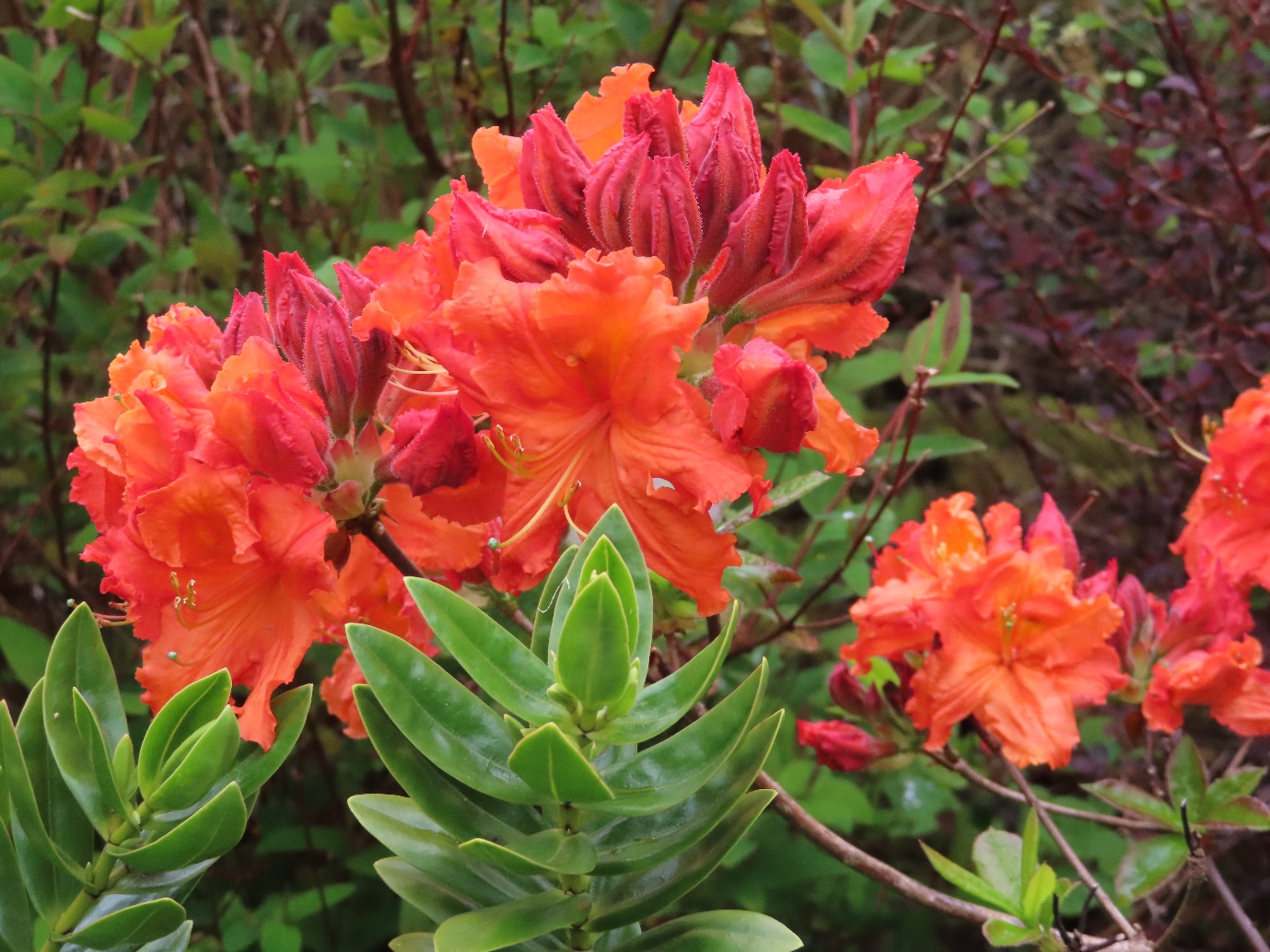 I discovered this plant eight or nine years ago in the bargain corner of a nursery. It looked like a small stick that was about to expire. I bought it and its companion for two euro with no expectation that they would ever come to anything. Years later they have grown to six or seven feet and continue to reward me with an impressive display and heavy scent. The labels simply said ‘Hybrid Azalea’ so I have no idea what they are but they are a welcome addition to the garden. 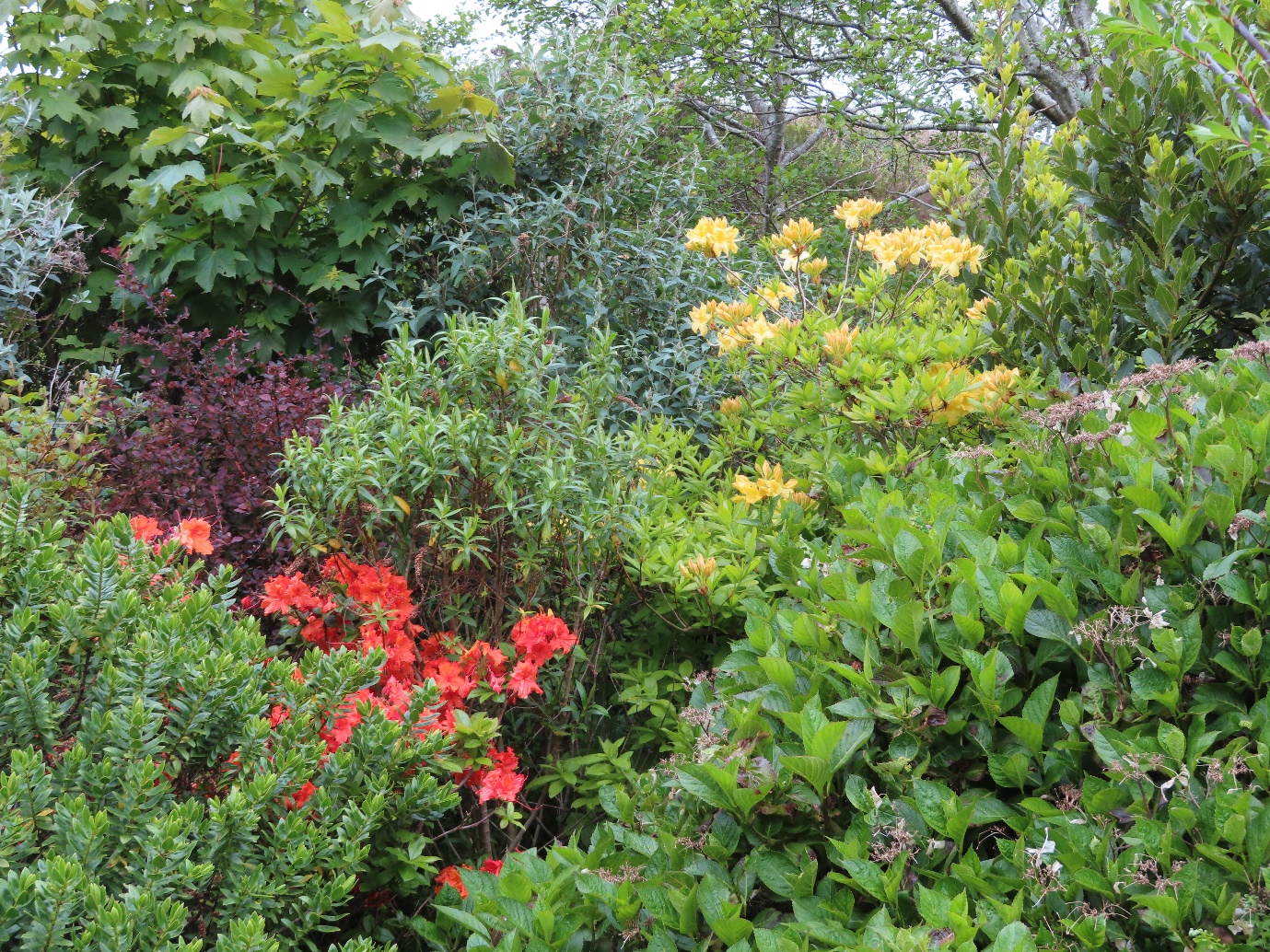 The rejuvenated Azalea in a sheltered corner of the garden along with its much larger yellow companion. 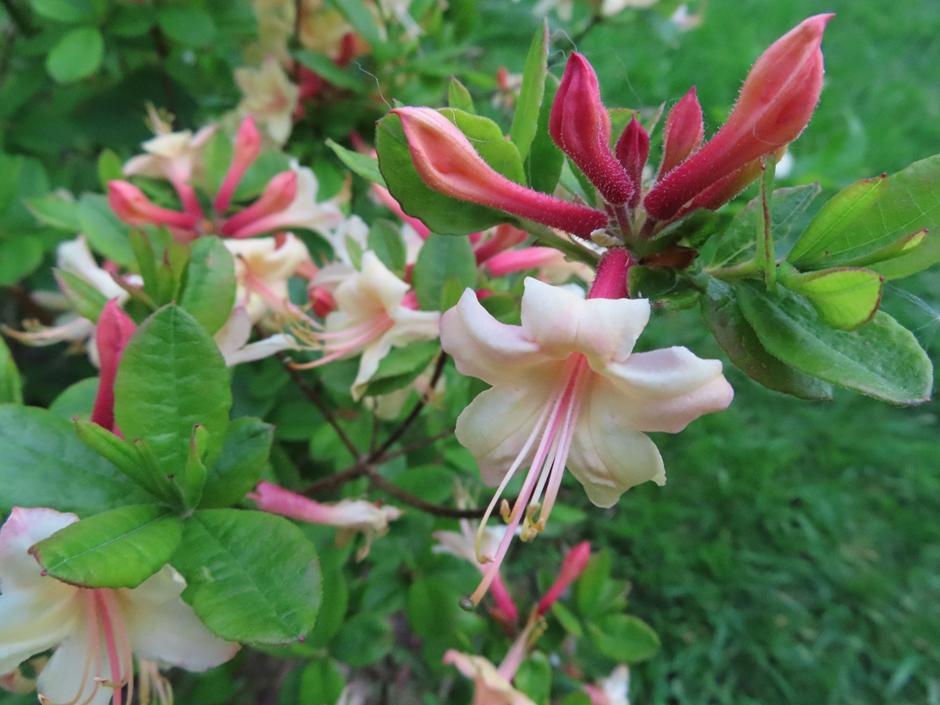 This Azalea is a more recent purchase and is very lightly scented. It is also in a sheltered part of the garden. It is worth noting that the flowers only lasted a few days whereas its hybrid friends have been flowering for weeks. 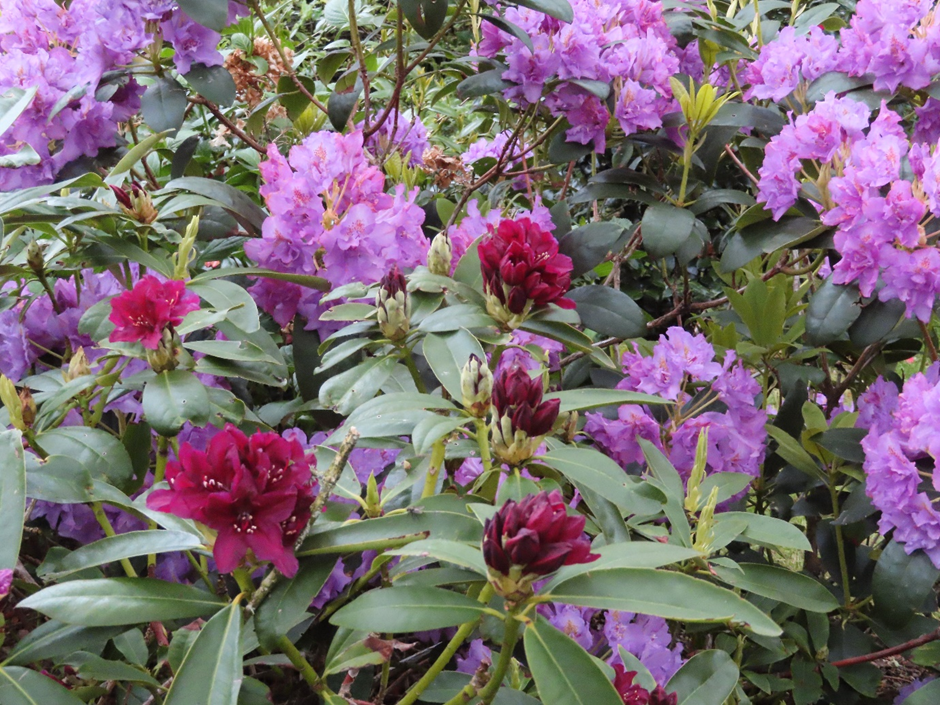 The rhododendrons are now at their best. I have tried to give them as much shelter as possible as they are not as robust as the camellias which I sometimes use to protect them. These Rhododendron’s, Polarnacht and Fastuosum Flore Plena, are doing well in the copse where they are now completely sheltered from the elements. 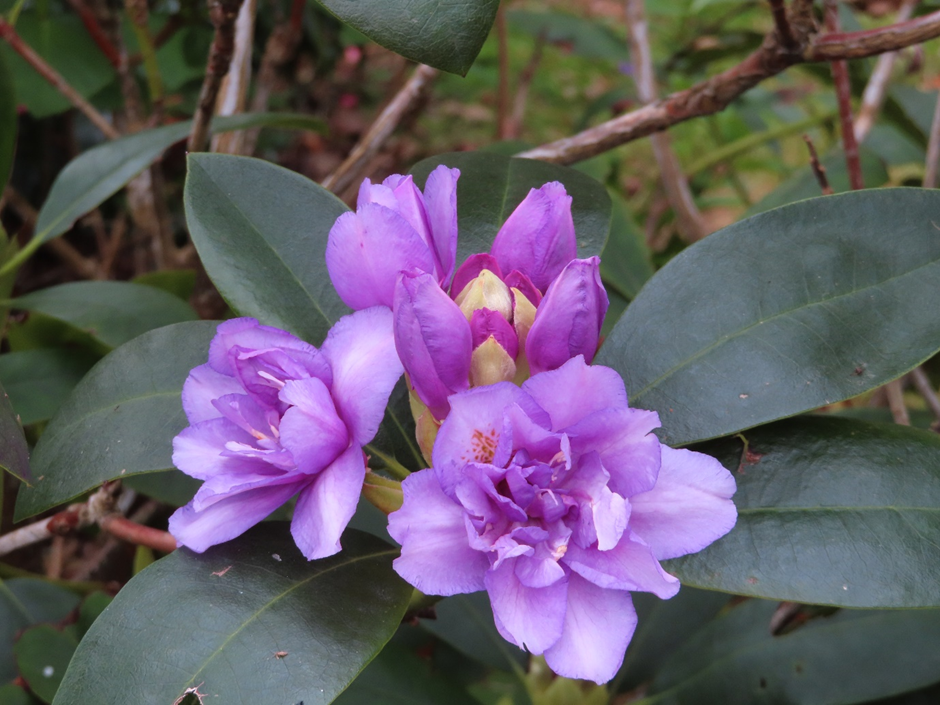 Details of a young blossom of the Rhododendron Fastuosum Flore Plena. 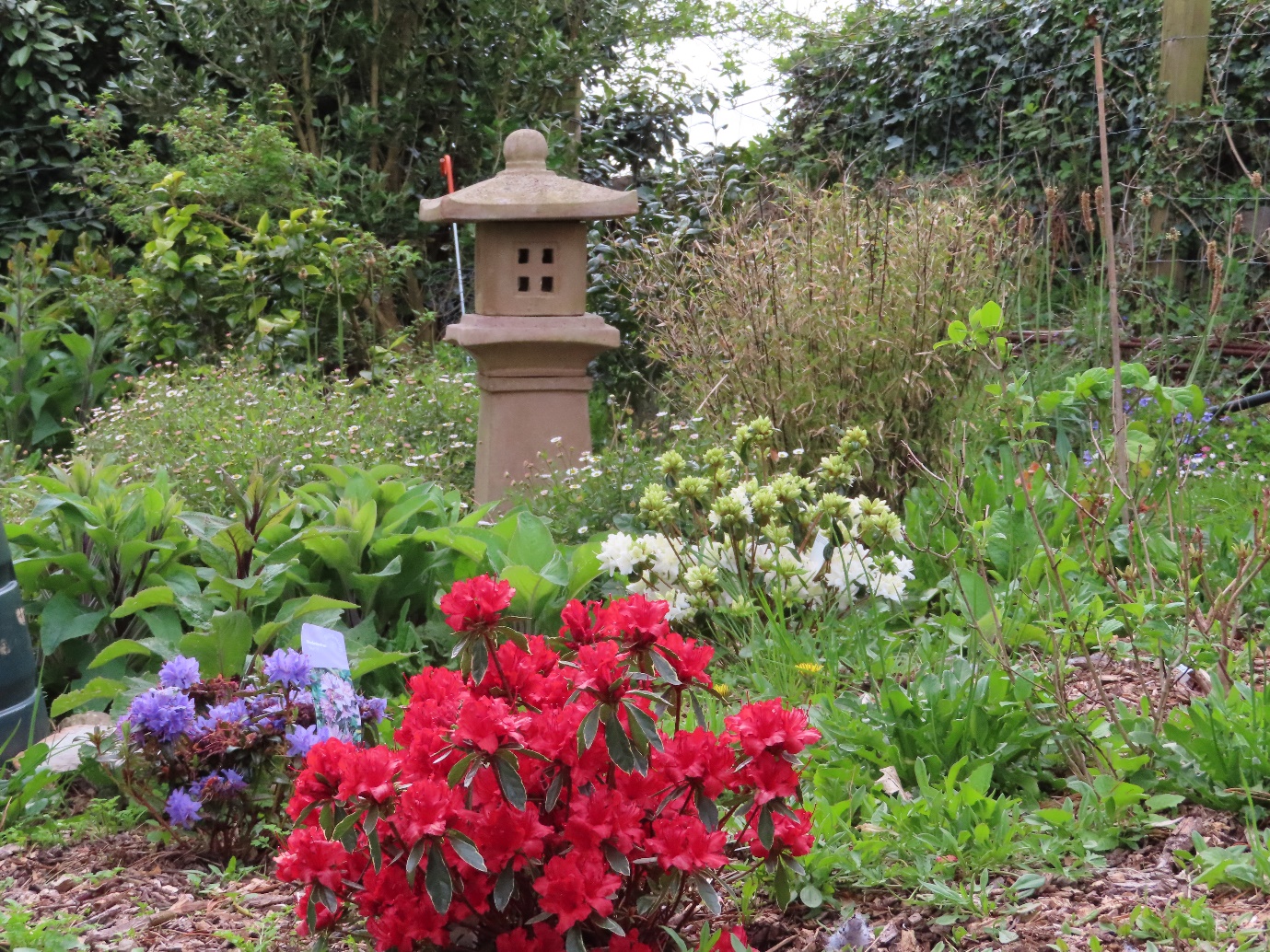 The lantern garden that I created last year with its newly planted rhododendrons and azaleas. I weed around the newly planted shrubs but leave all but the dreaded sorrel to flower and seed before tidying the bed. Sorrel has an attractive flower and its leaves can be used in salads and soups but the roots have no end and it is very difficult to eradicate once established. 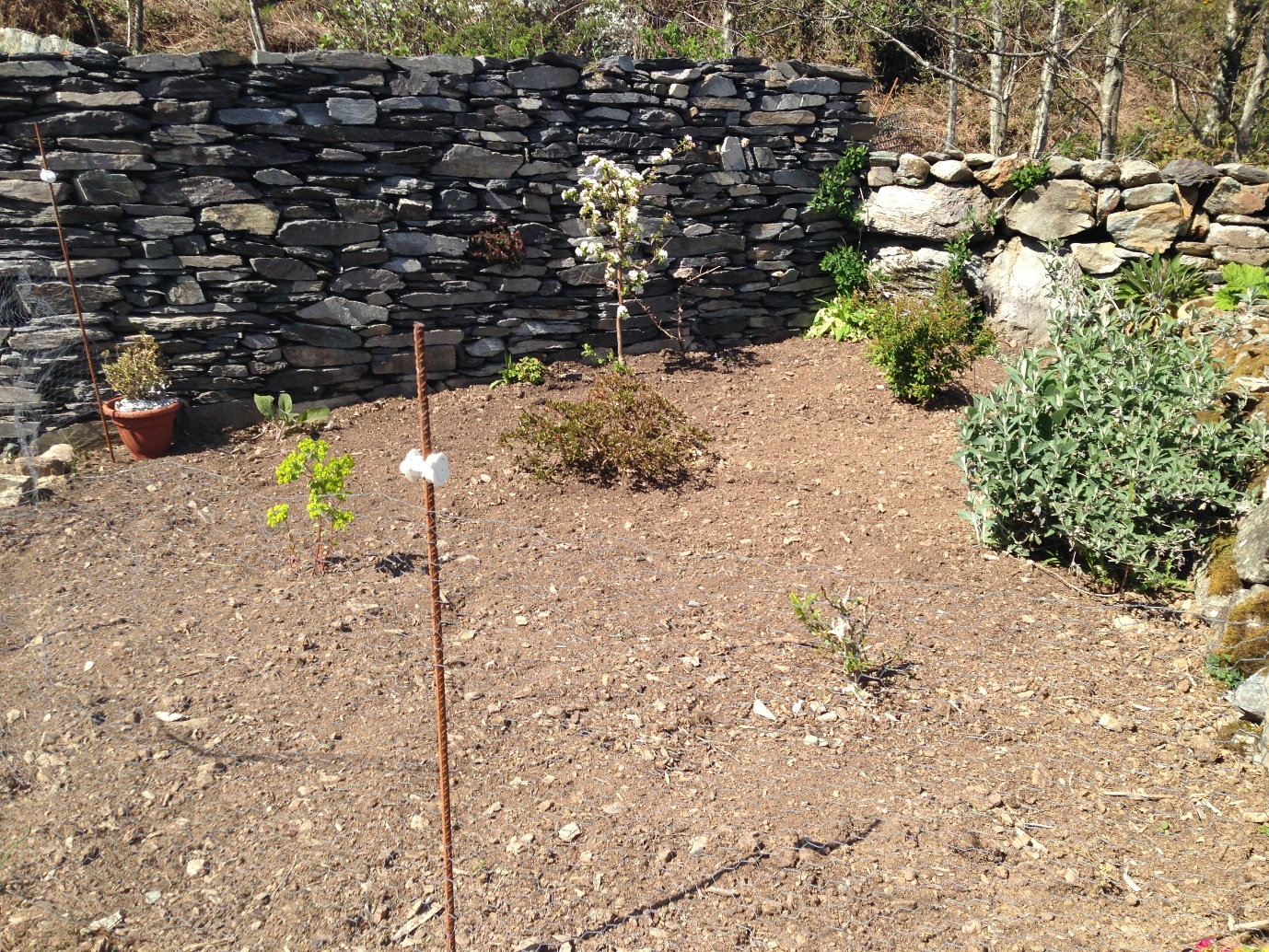 I have not found plant labels very useful particularly when it comes to determining the final size of a plant. ‘Two meters in ten years’ provides limited information, especially as I intend to live a lot longer than that. Does the plant stop growing after ten years or even die or does it add another foot or two a year or even shoot up to forty feet overnight? The situation is complicated by the fact that the climate in West Cork seems to favour rapid growth and turns meticulous planning into guesswork. This is particularly evident in my planting in one of the few sheltered corners available to me when I first arrived here. I started out with a crab apple tree the cherry bush Prunus Incisa ‘Kojo-no-mai’, a Magnolia Stellata and some smaller shrubs for the front. 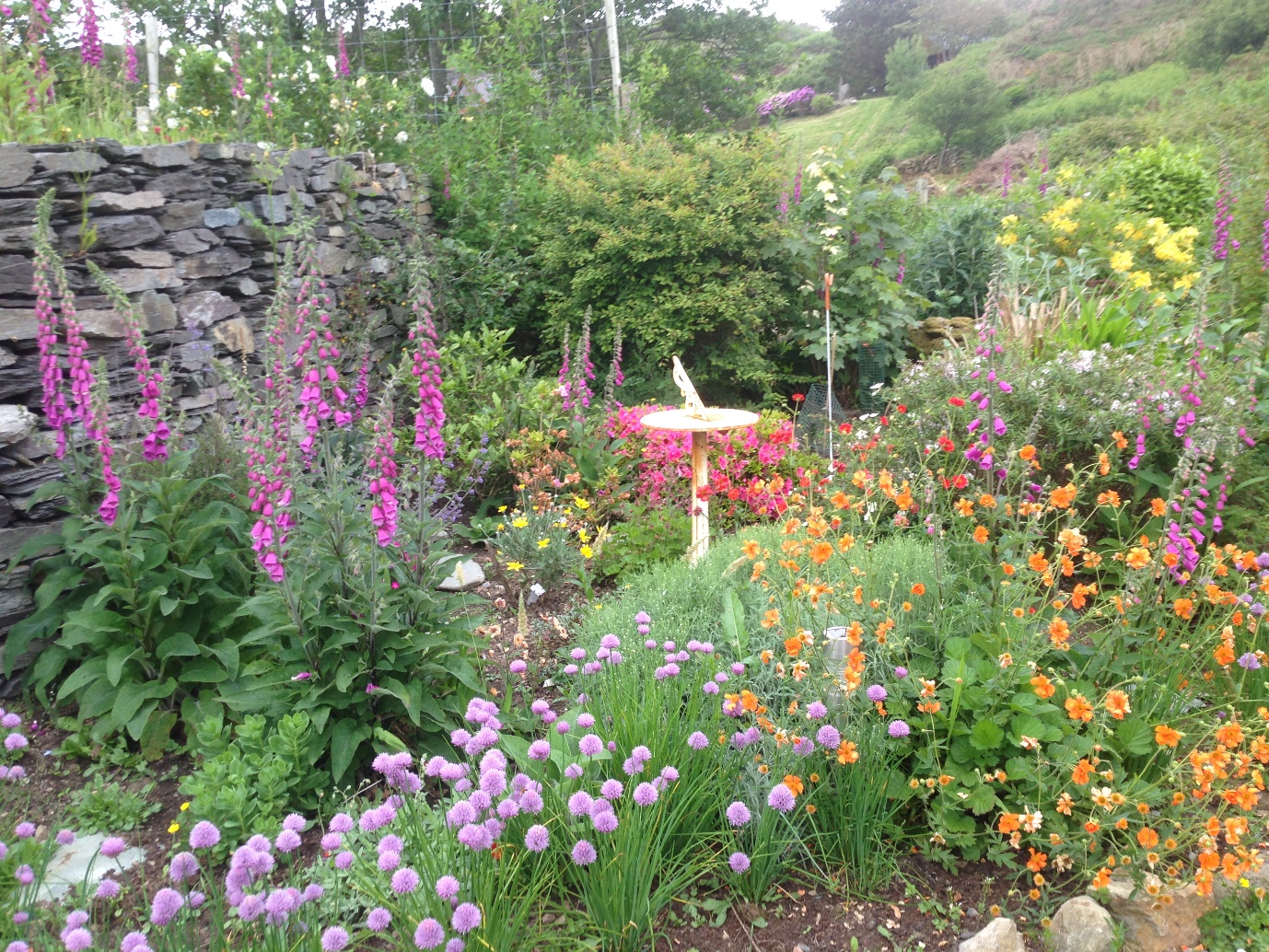 In 2018 the same area was looking looking very colourful and enhanced by the foxgloves which seeded themselves at will and I was particularly proud of this corner. 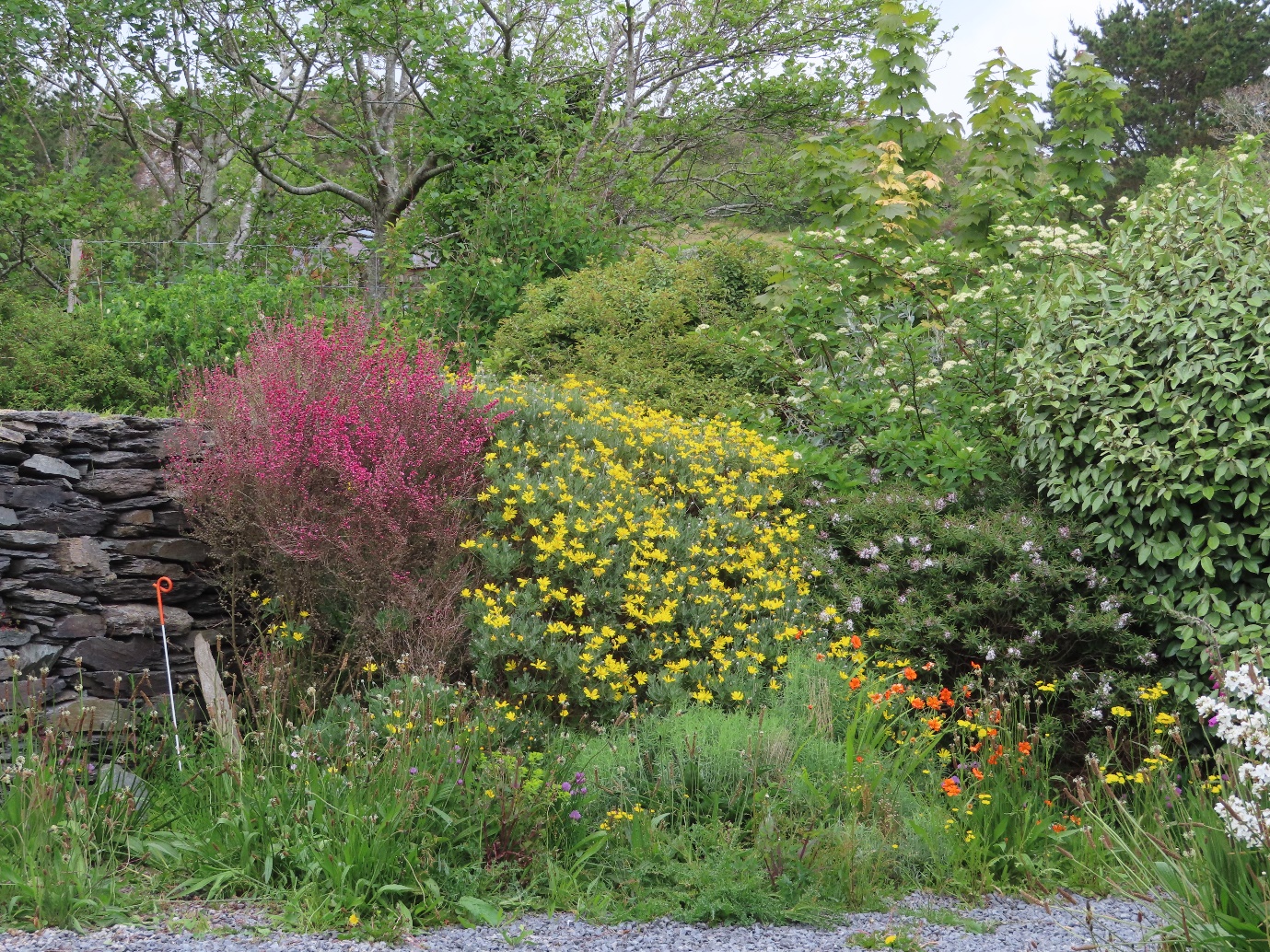 The same corner this month. The have New Zealand Tea Tree has grown much higher than the predicted three feet and its South African neighbour looks set to take over the whole bed. The Magnolia Stellata is completely hidden as is the Prunus Incisa ‘Kojo-no-mai’. That did not stop them from flowering and the crab apple tree is looking very healthy despite the fact that you can’t see it. As is typical of wildflowers the foxgloves have moved on and are flowering throughout the rest of garden. I think that some remedial action is required but the task fills me with trepidation as pruning is not my forte. 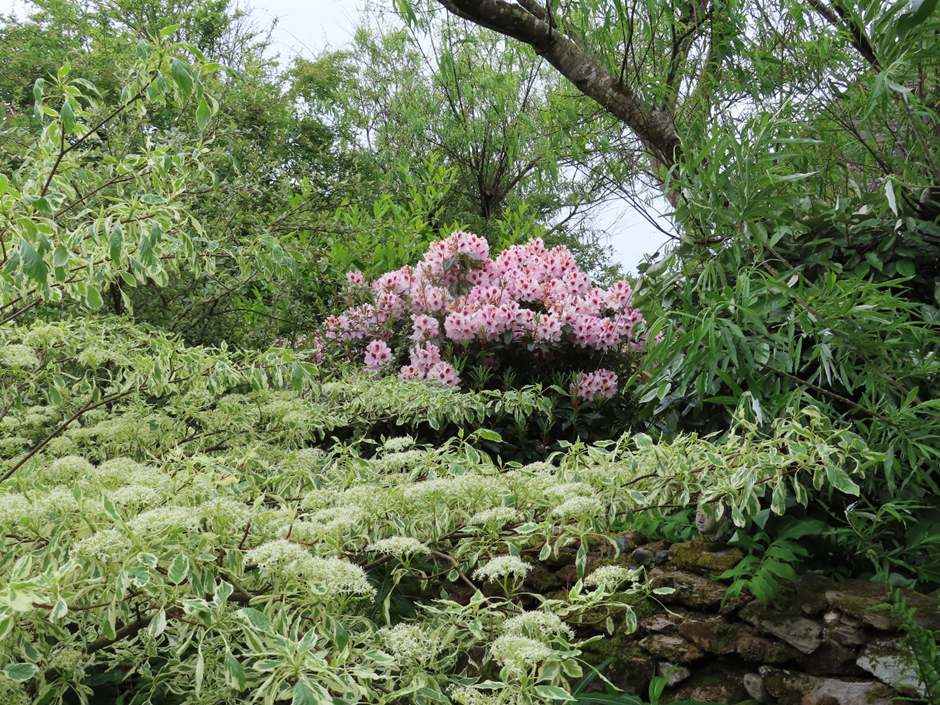 Here is another example of a corner that may be getting out of hand. This Cornus Controversa has settled in well with the rest of the copse and contrasts well with the Rhododendron which was planted just a few years ago. I am now worried that the latter will have a sudden growth burst and engulf all of the other plants in its vicinity. At times it feels as if I am creating a jungle. 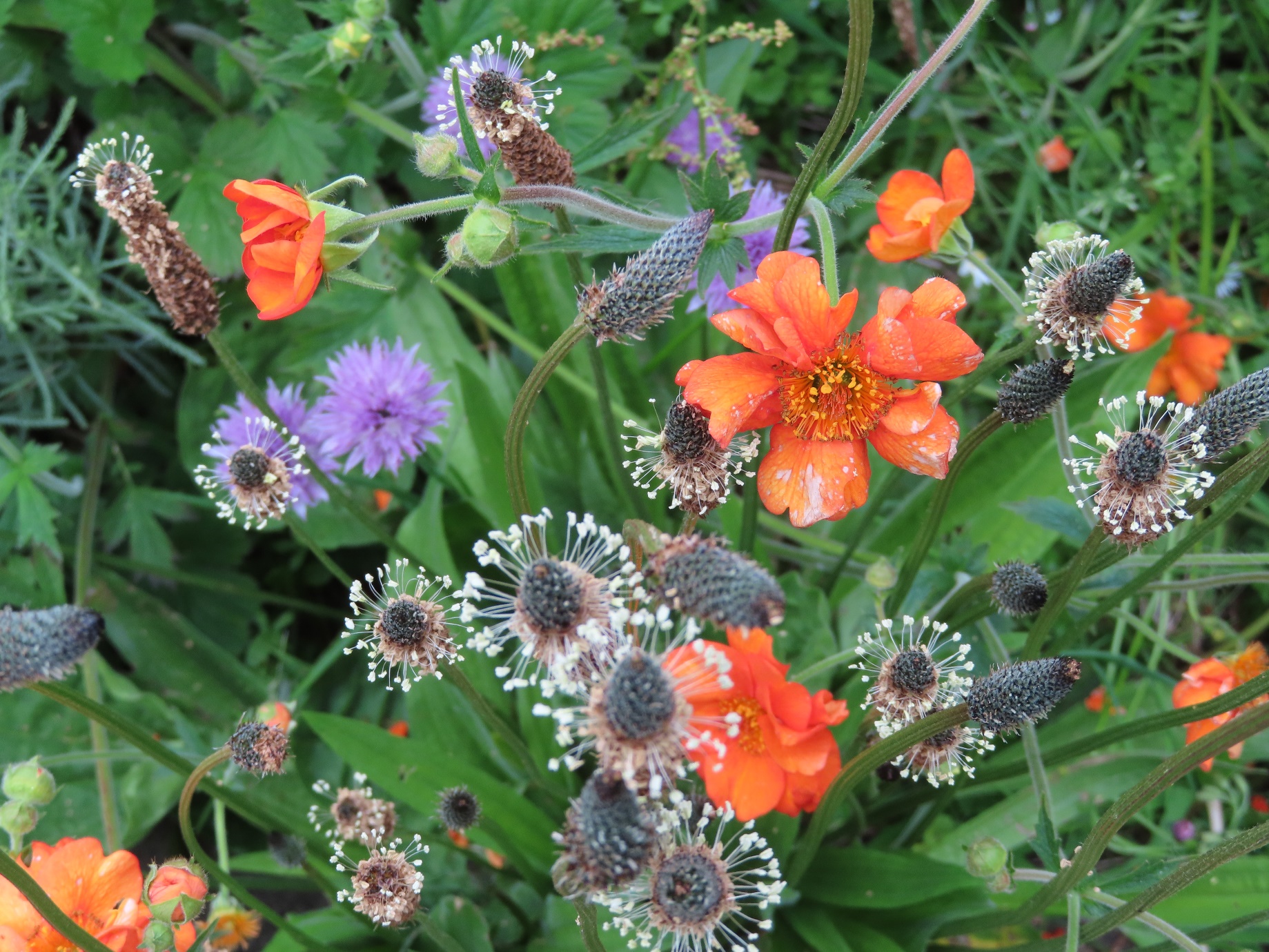 I am always experimenting with combinations of wild and cultivated flowers looking for perfection. This selection of Geum (Mrs Bradshaw), Chives and Ribwort Plantain seems like perfection to me. I believe that they are experimenting with using plantain as food for cattle in New Zealand as it is both nourishing and reduces unhelpful ‘emissions’ from the cows. If the project is successful, I will be able to sustain a herd of cattle in the garden on the amount of Plantain that grows here. 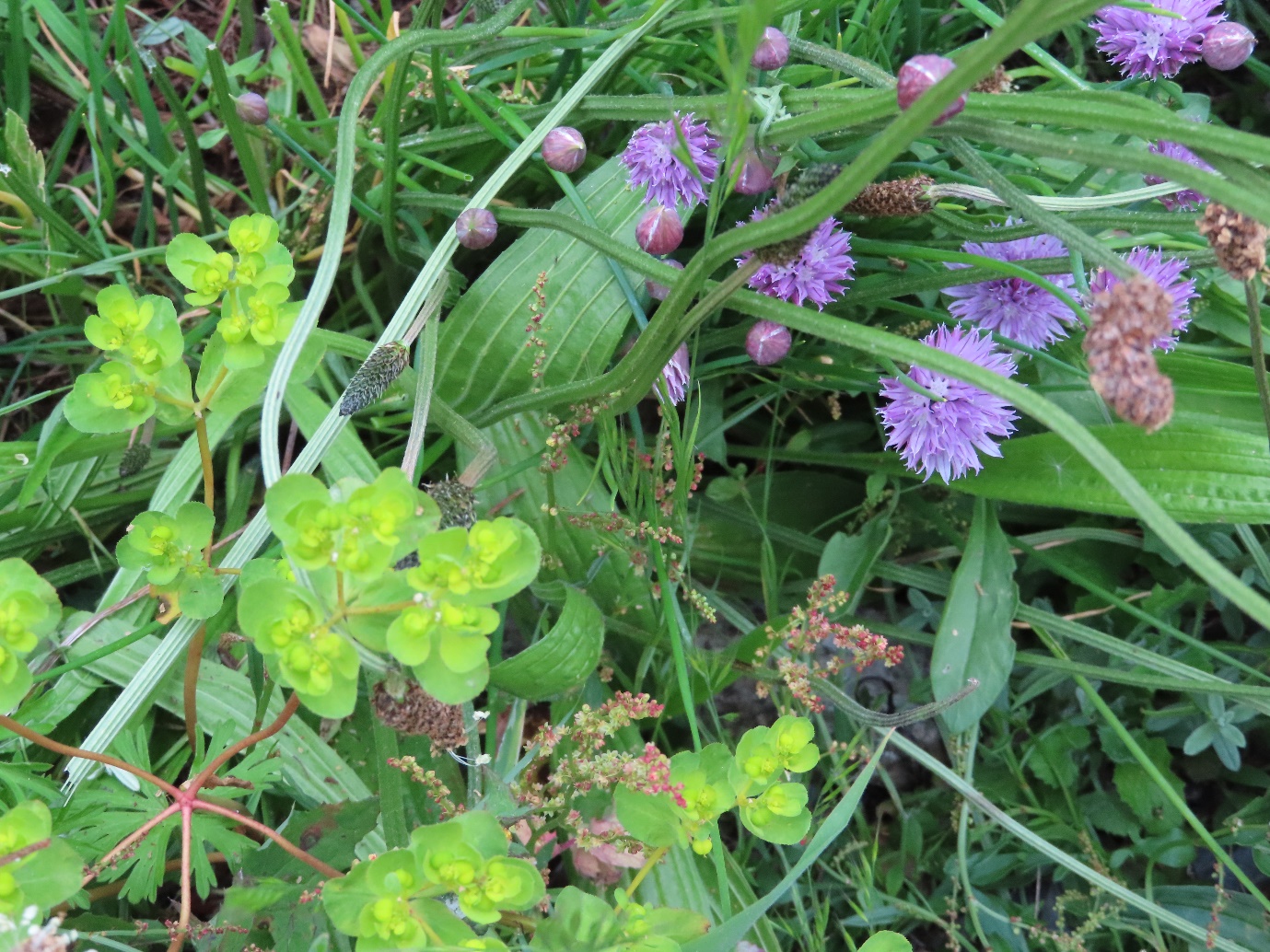 I use chives at the edge of many of my borders as I think they are a good accompaniment for almost any flower wild or cultivated. Here they are living in harmony with spurge. 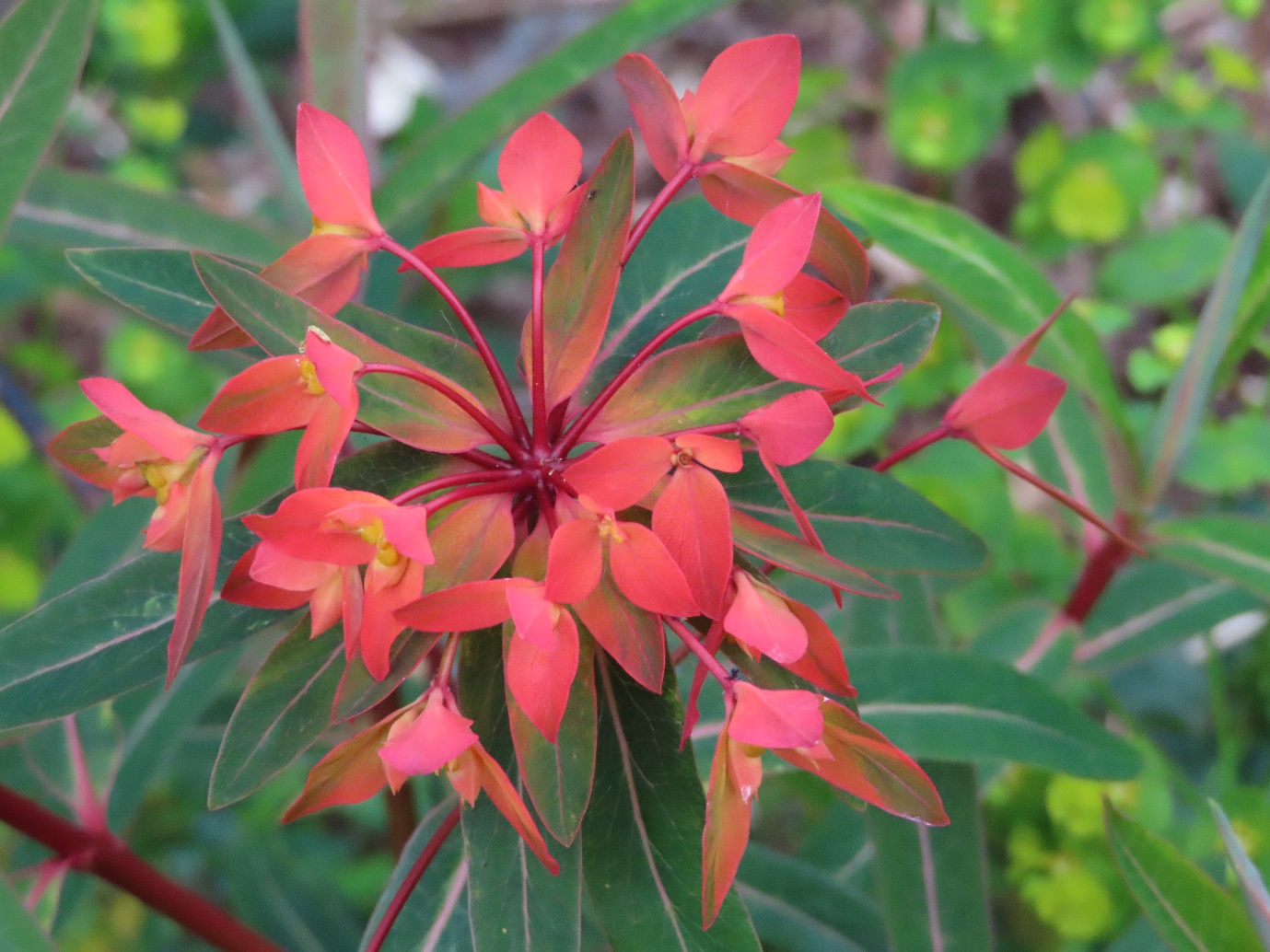 A relative of Spurge this Euphorbia Grifitthi fireglow is one of the most attractive of the smaller euphorbia and is doing well alongside its cousins on the willow garden. 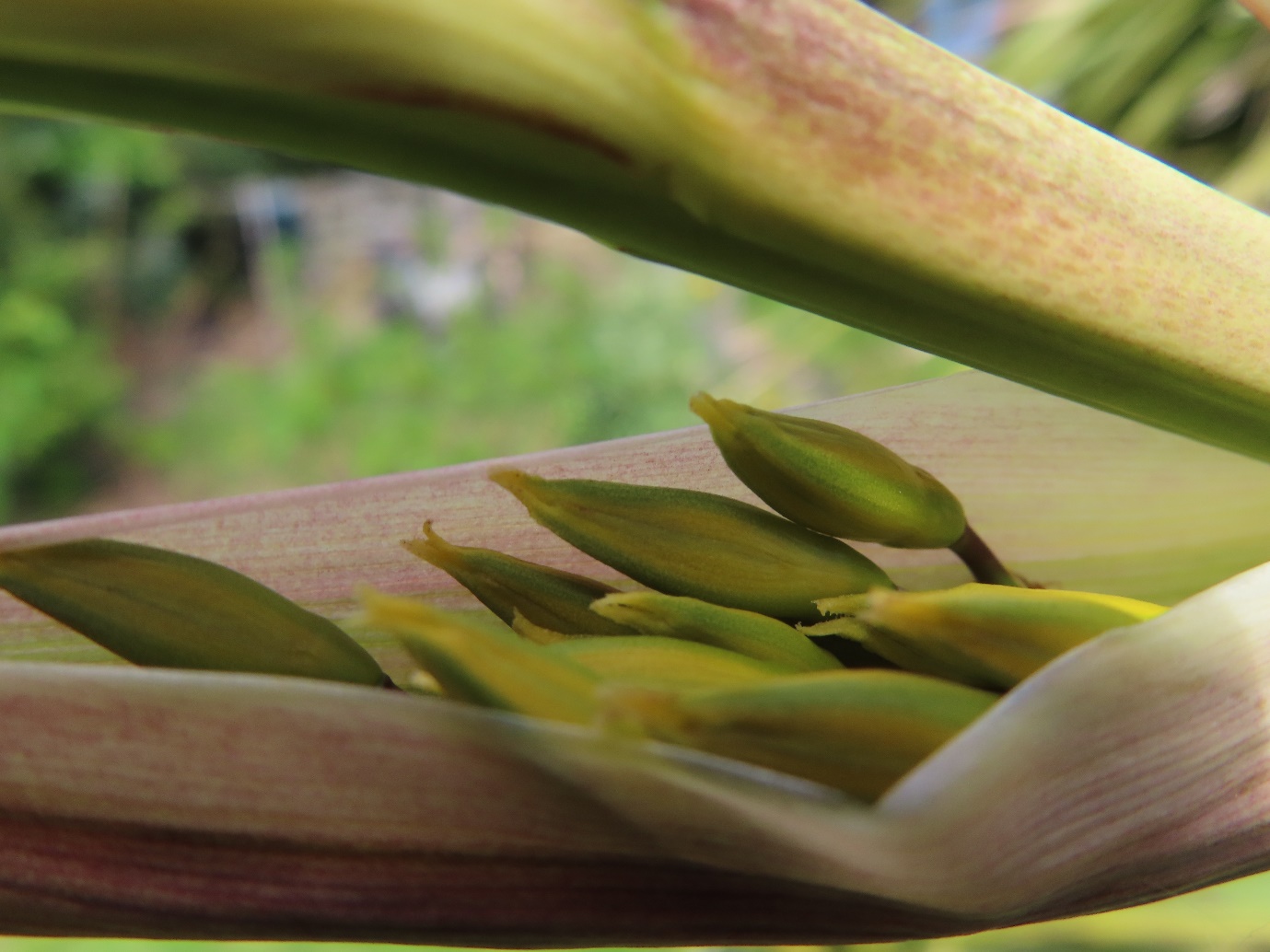 I am tying to pay attention to the small details of the plants in the garden now that the garden design is almost complete. There are so many aspects of a plant that are ignored because they are so fleeting. The flowers of this Phormium are very dramatic when in full bloom but are also very beautiful as they emerge from their ‘pod’. The Ivy is another plant which gets its attention once it has berries in winter but is equally attractive at this time of the year. I have to remind myself that I need to stop and look at the beauty of the garden around me rather than always focussing on the next ‘project’. 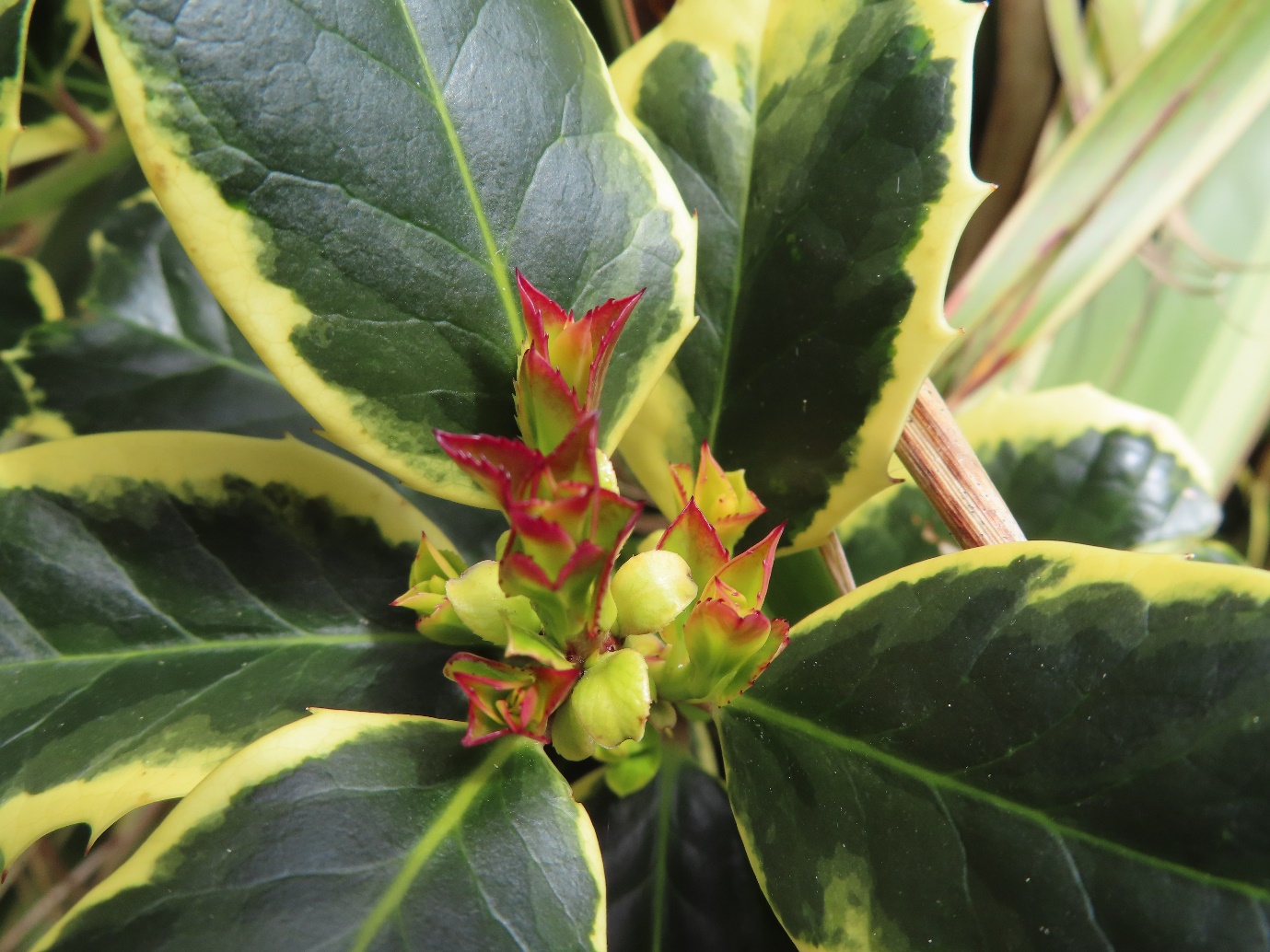