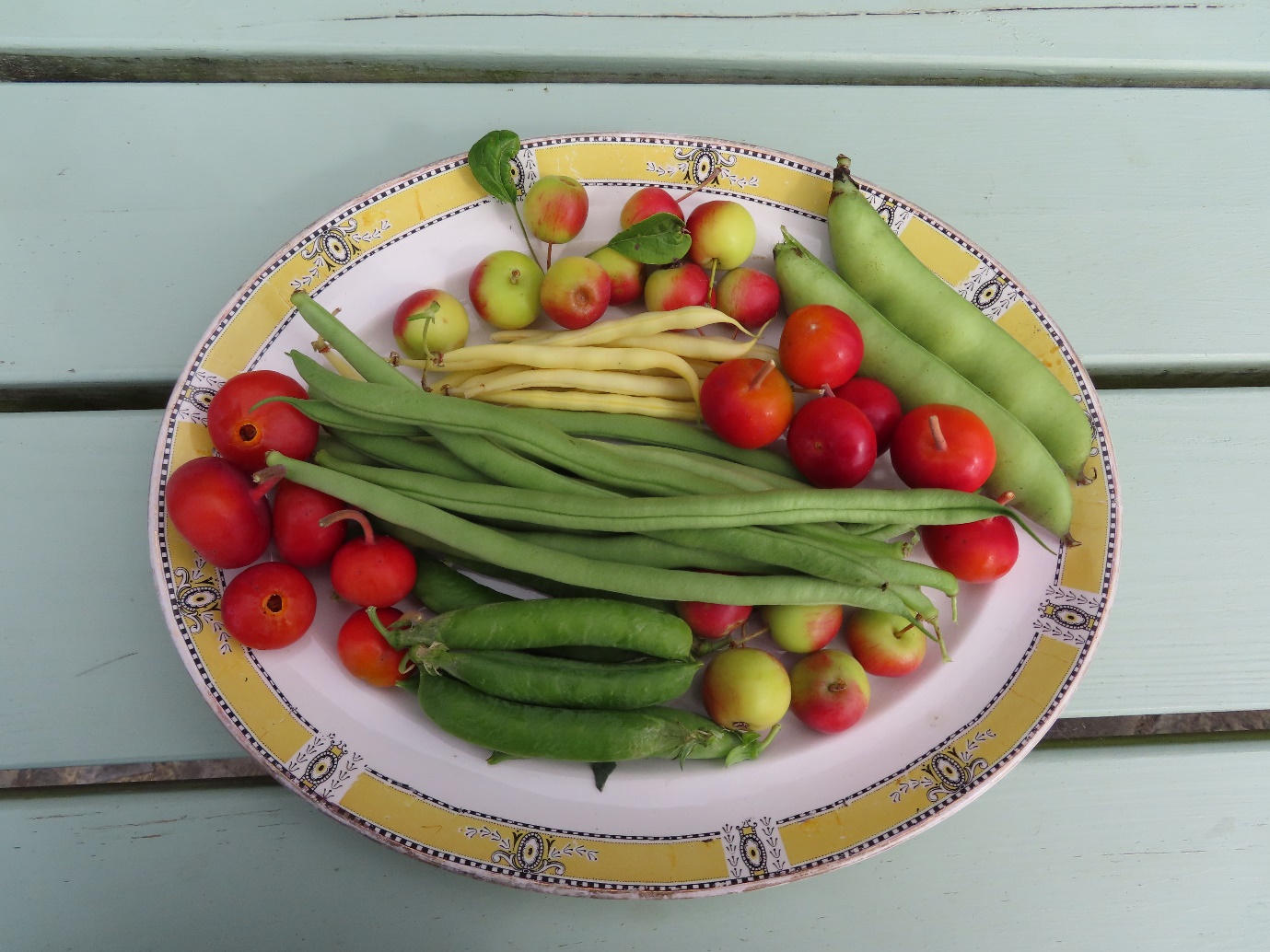 I have never really been able to replicate the pleasure that I got as a child from growing my own vegetables in my own plot in the garden. Years later, in the North East of Scotland, it seemed relatively easy to grow vegetables despite the long harsh winter and frozen ground. In the short window of opportunity, the summer days were long and sunny and made up for the endless dark winter days and I was able to fill my freezer with my own produce. My attempts at growing vegetables here have been haphazard as I have had to concentrate on planting a garden and creating shelter. This has been the first year that I have had time –and some fantastic raised beds – to start taking the work seriously. I have decided to concentrate on a few new crops each year. I have had a childish pleasure at freezing 7 lbs of runner beans despite the fact that this is one of the few successful crops. The leeks, grown from my own seeds, have also done very well and I hope to build on these achievements in the next few years. 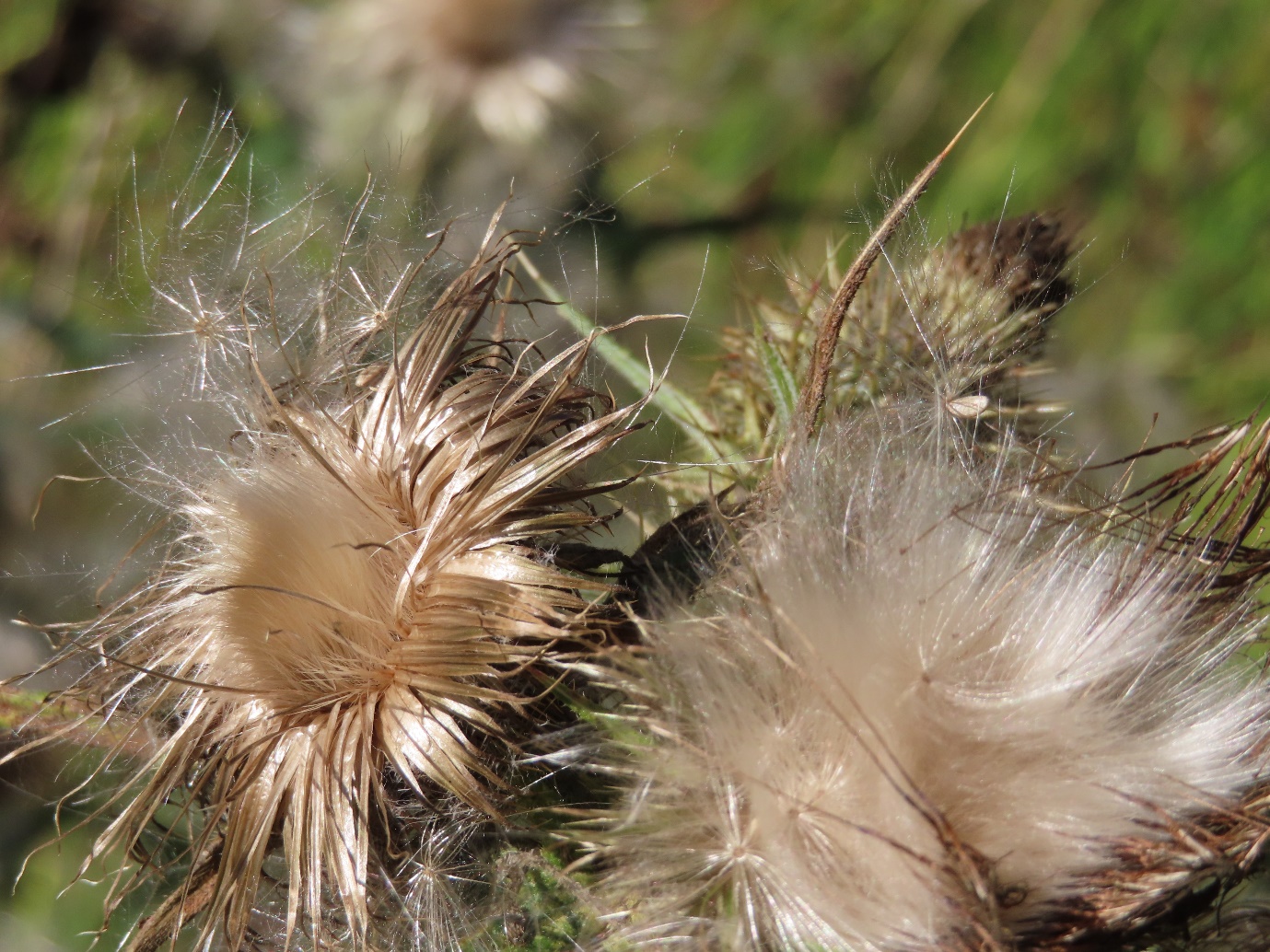 The thistles are almost through their life cycle for the year but have been glistening like gold on warm sunny days. 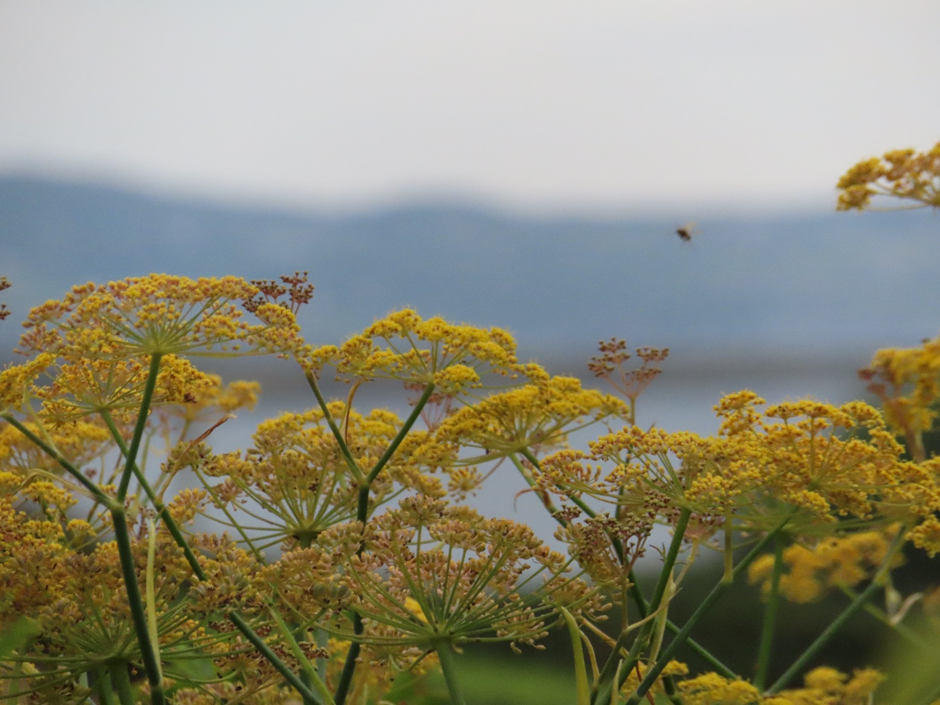 I planted one fennel plant some years ago and it has been reseeding itself ever since. Like most things that run wild in the garden I have contemplated cutting it all back. However, it is now proving to be popular with a number of birds both for shelter and the seeds that have appeared, so it lives for another day. 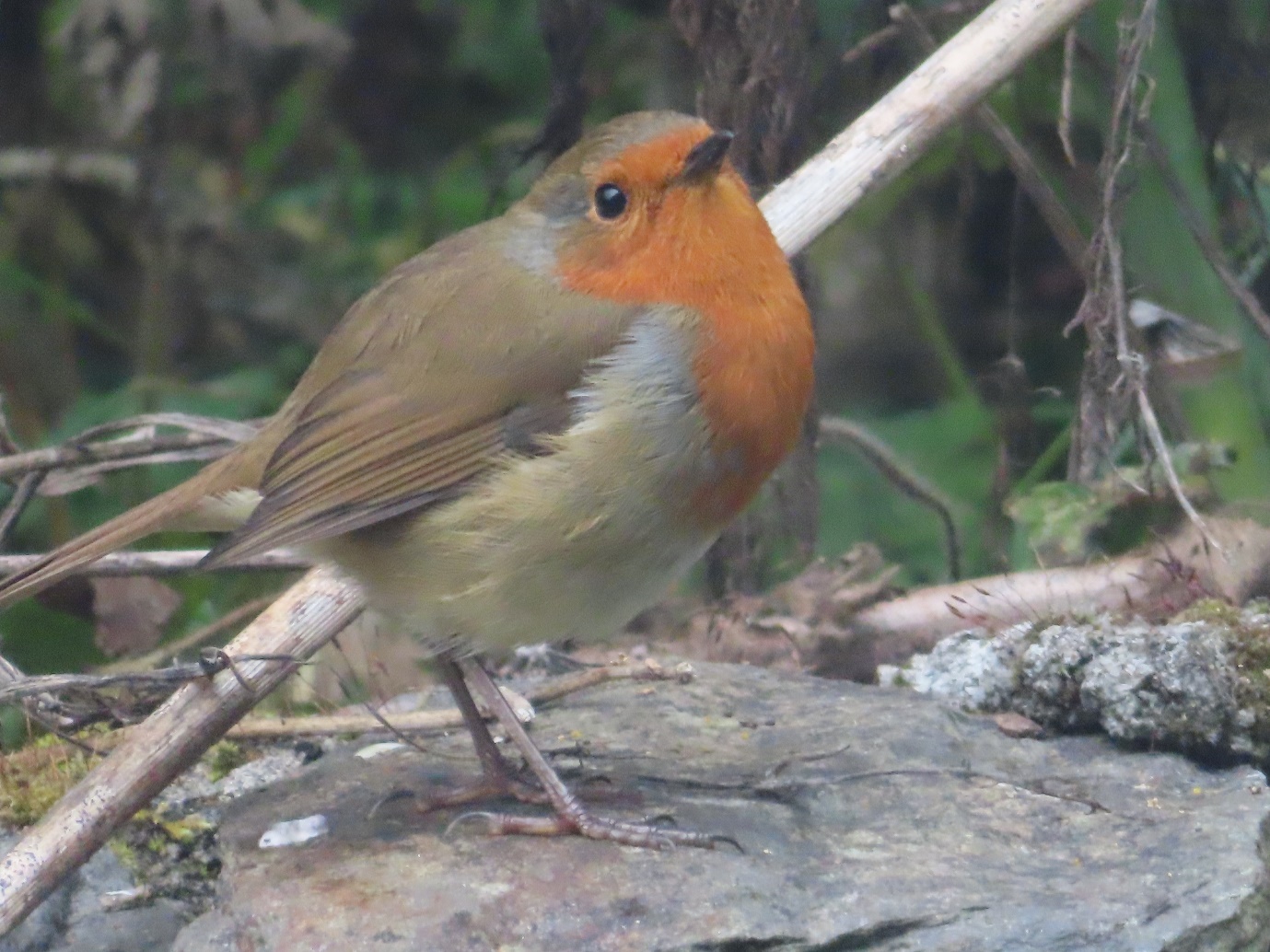 The robins have been very shy this summer and I was surprised to spy this one through the kitchen window feeding from the fennel seeds. We offer a very varied diet in this establishment!

Tansy is another vibrant yellow plant and while the butterflies spend time on the flowers, I am never sure if they are getting any food from them. However, as they mature bees and insects of all varieties seem to frequent them so I forgive the fact that they turn an ugly brown very quickly. 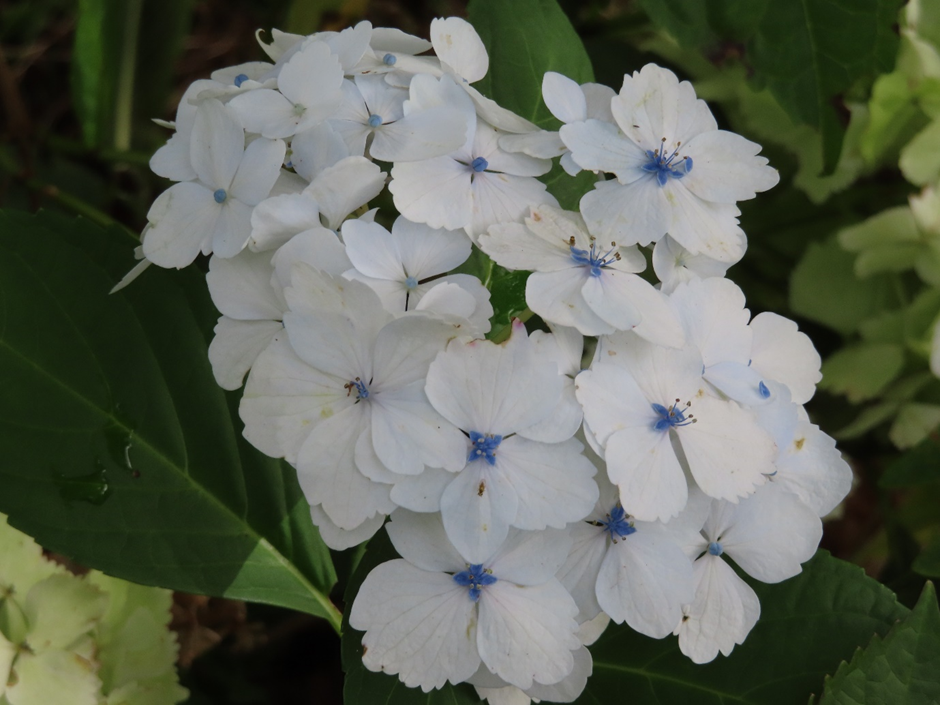 It has been interesting to see how the hydrangea have fared this summer. Madam Emile Moulier seems the most vulnerable whether it is growing in sun or shade. But in almost all of them there is at least one new flower head with the beautiful original colours. 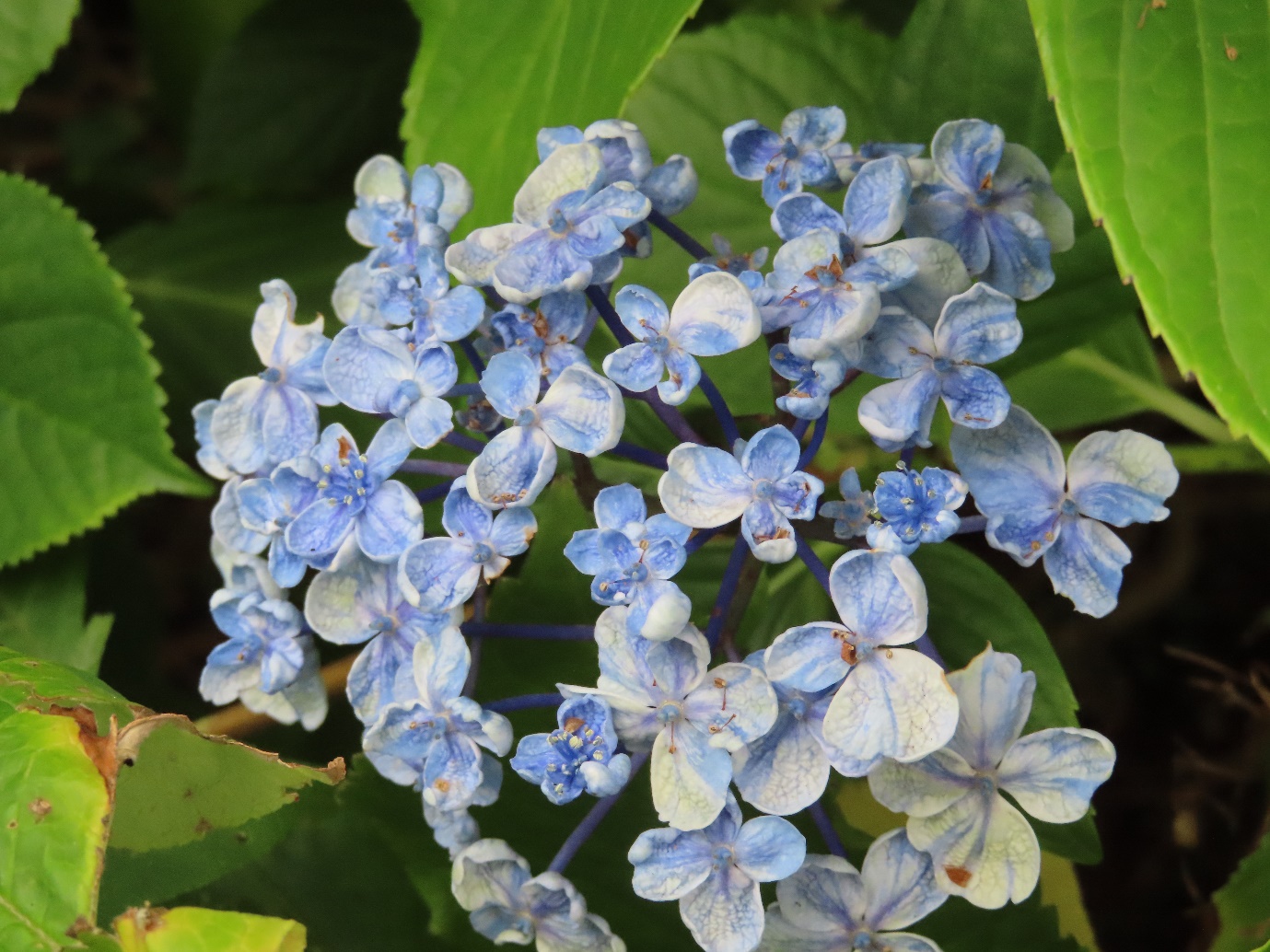 The Hydrangea Ayisha produced a lovely flower as usual this summer. As it always turns an ugly black regardless of the weather it has to be deadheaded very quickly and I have mixed feelings about it. This variety was pink when I bought it but has turned blue in my acid soil. 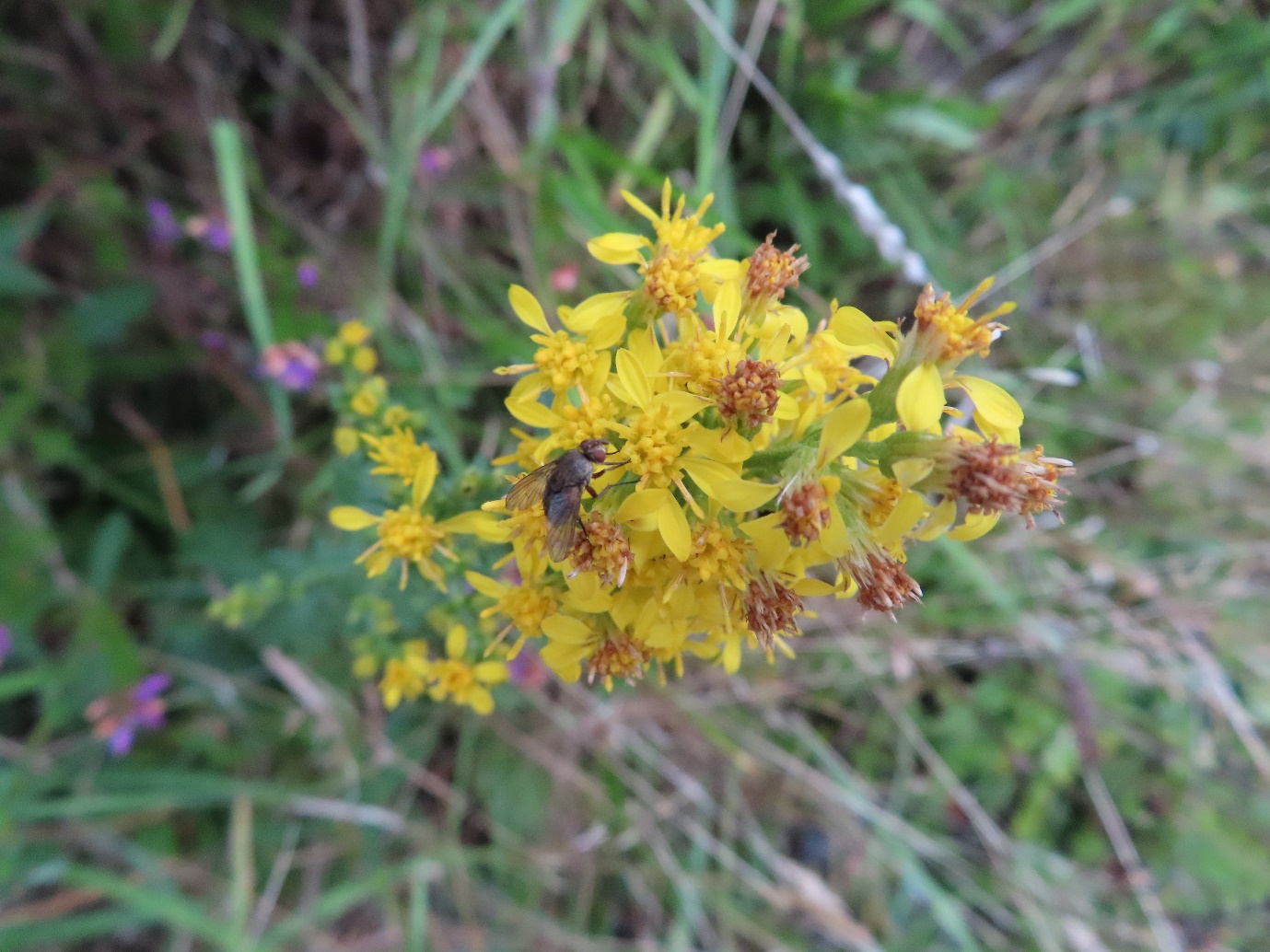 Goldenrod is now the most prolific wildflower on the bank behind the house. Like many of its companions it was considered to be effective in healing wounds. It is a nice contrast to the wild heathers also populating the area. 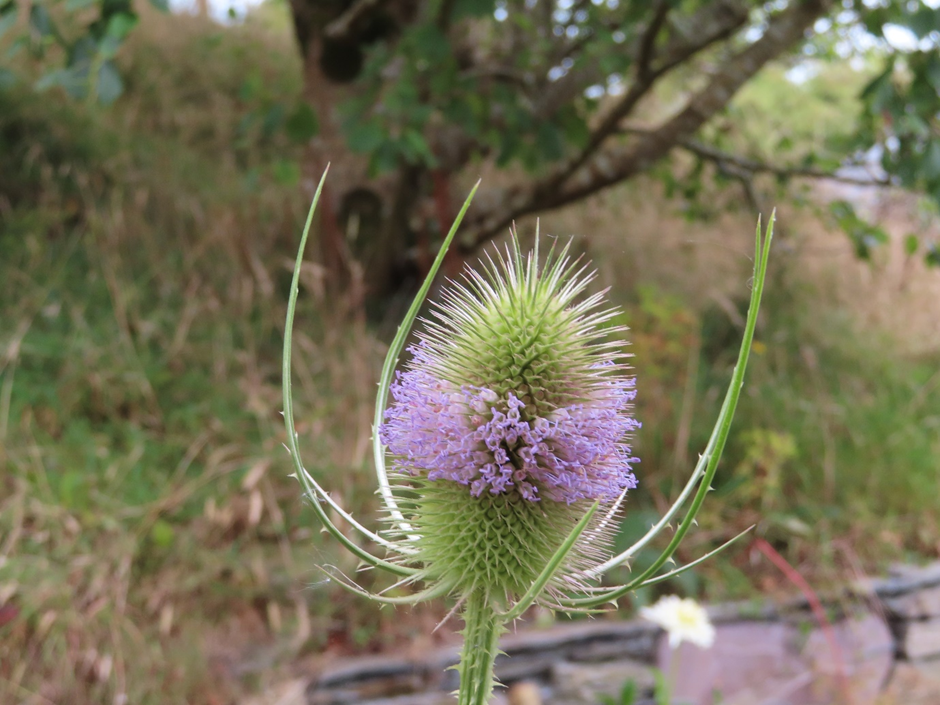 I never plant wildflowers in the garden, so I am always curious to see if I have any new varieties. Technically this wild Teasle arrived in my nursery garden last year but it takes two years to produce flowers. Apparently, it was used to ‘tease’ out fibres from raw wool only to be replaced by steel combs. I do hope that it becomes a regular in the garden. 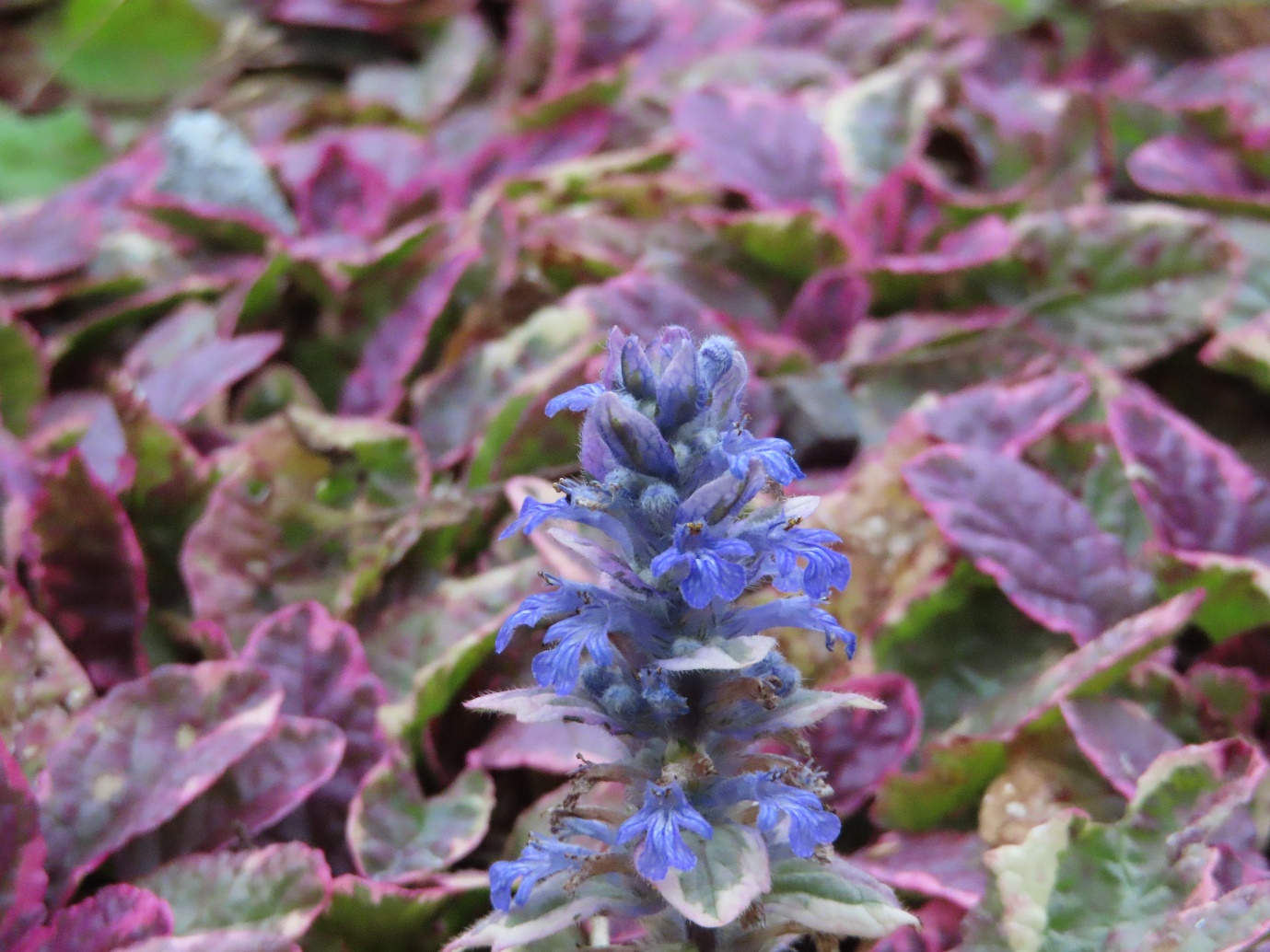 Apart from the marjoram, my rockery has looked rather dry and tired for much of the summer but with a little bit of rain the Ajuga reptans has made a quick recovery. This one, Burgundy Glow, is flush with new flowers. 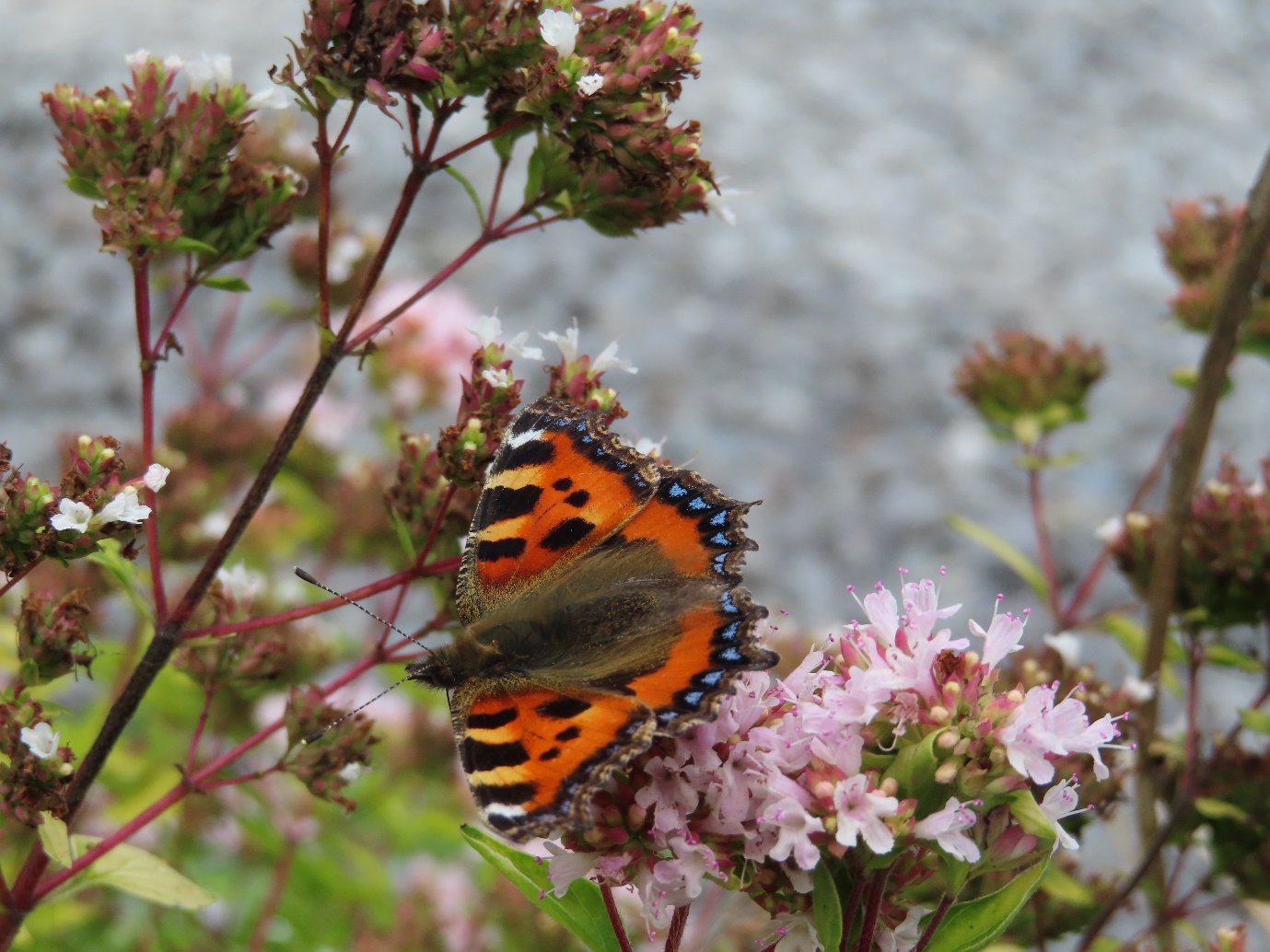 I had been concerned about the butterflies as they arrived in the garden after some of their favourite sources of food were past their best. I could not understand why so many were congregating behind the house where my Hosta live in the shade. I have now discovered that they love the flowers of marjoram which I have planted in the gravel paths throughout the garden and which flowers for much of the summer. I hope that this may prove to be an important food source if the hot summers continue and the Buddleia are past their best when the butterflies arrive. 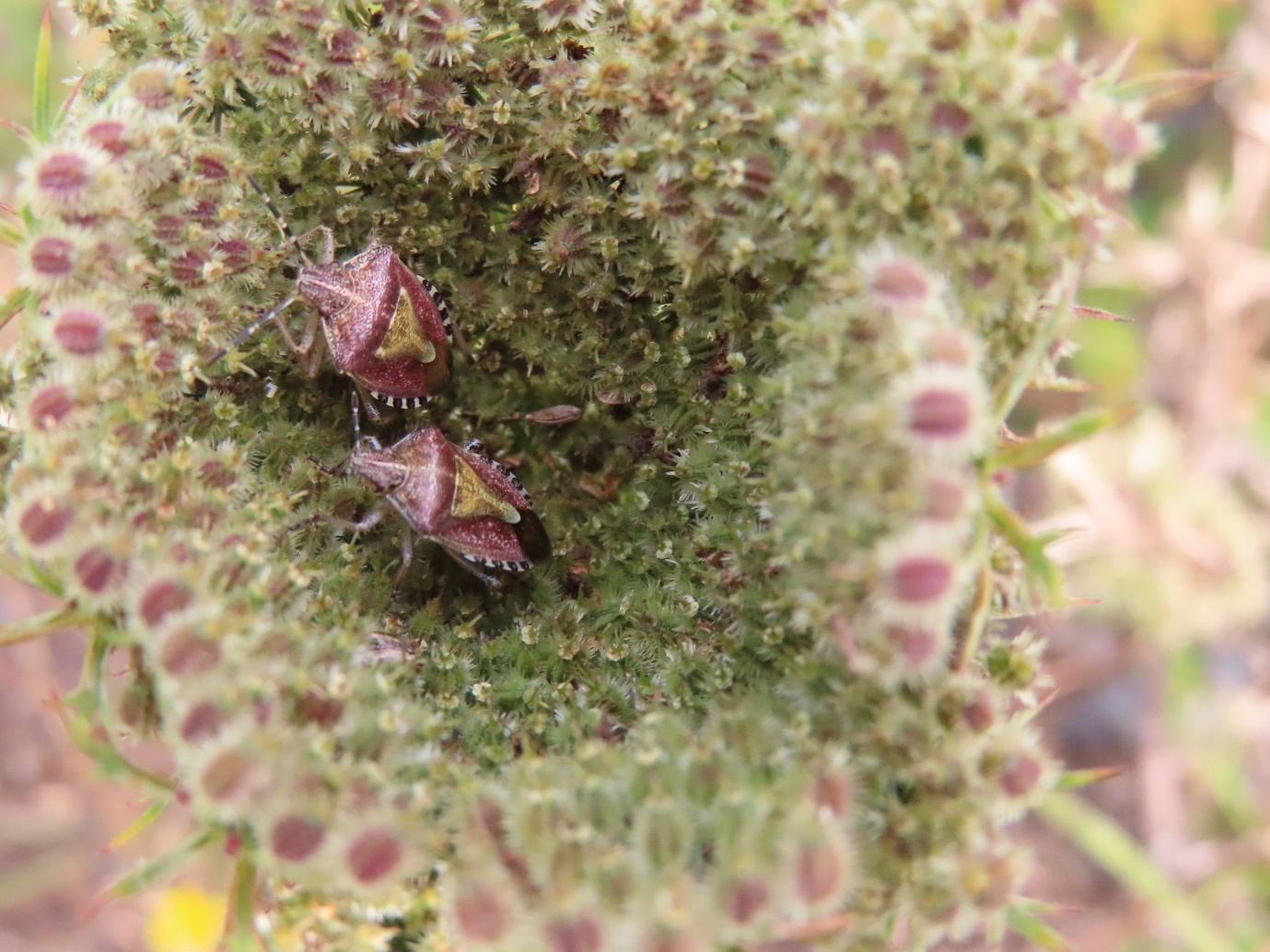 The Sea and Wild Carrot continue to provide interest in the garden as they start to lose their flowers and their umbels contract to an attractive ‘bird’s nest’ shape. Instead of birds these nests are now full of shield bugs like the Hawthorn Shieldbug above and are also hosting some ladybirds. 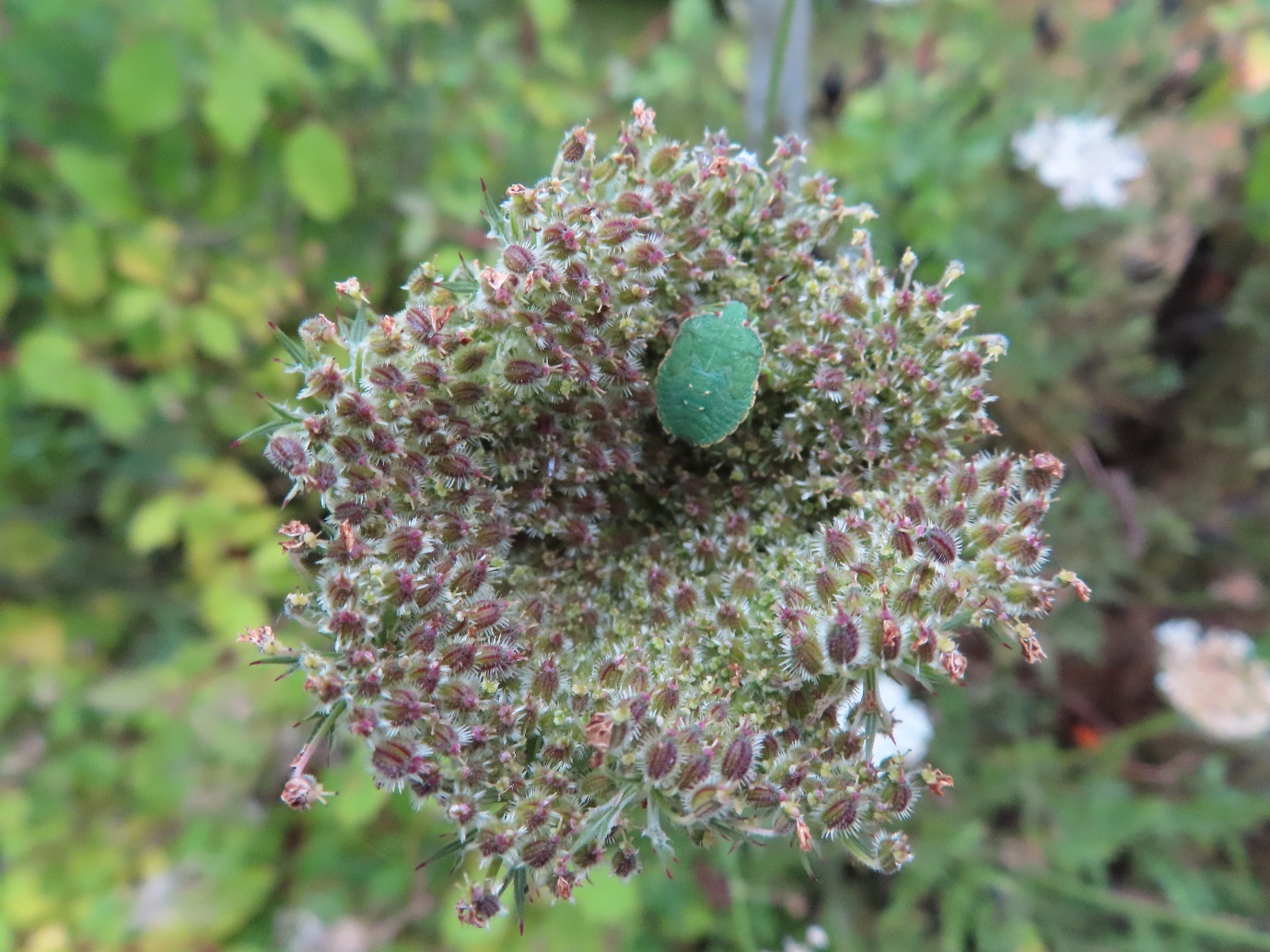 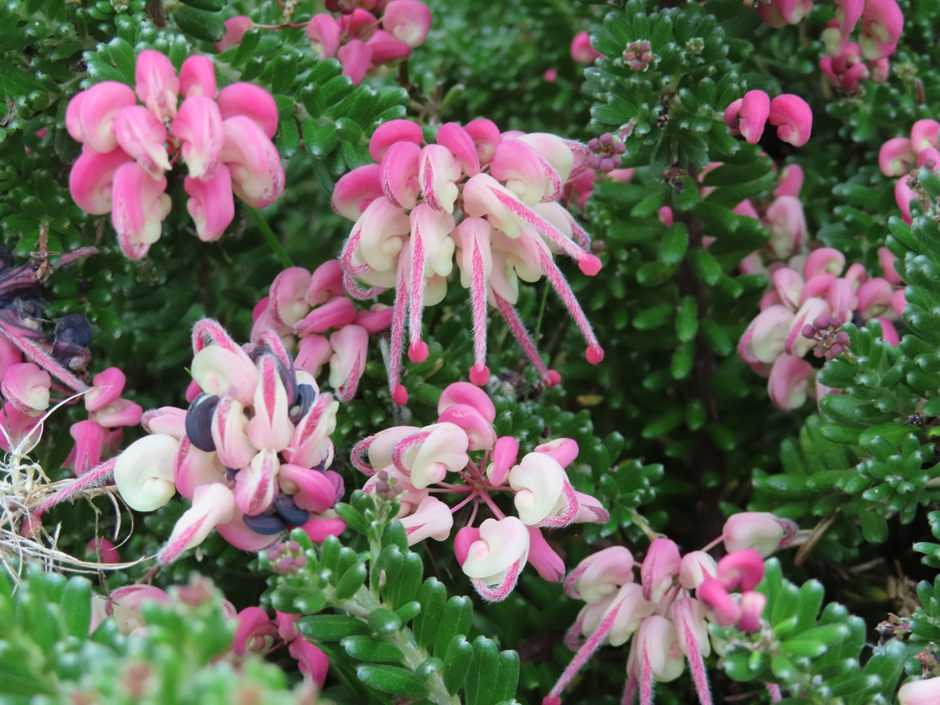 This Grevillea is going on to a couple of my lists for my future planning of the garden. It flowers throughout the year and despite living on a dry stone wall which retains little moisture it is looking stunning at the moment. Surrounded by sage, marjoram and rosemary one could almost believe that the garden was flourishing. 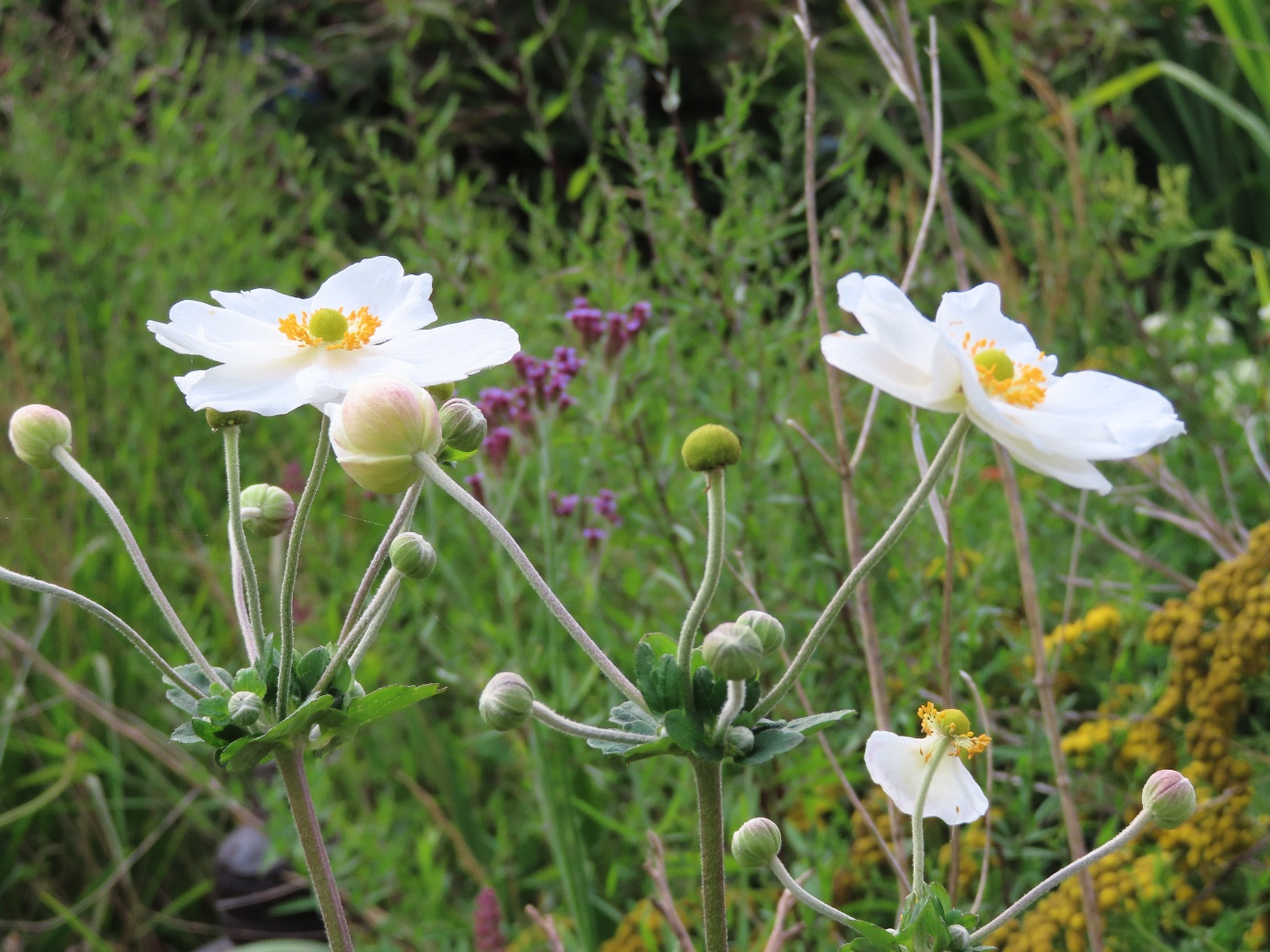 All of the vibrant colours in the herbaceous border have disappeared as the long dry summer takes its toll. This delicate Japanese Anemone has now come into its own and is the perfect backdrop for the hoverflies that frequent it. It has not minded the lack of water perhaps because it was hiding under the Crocosmia Lucifer for most of the summer.