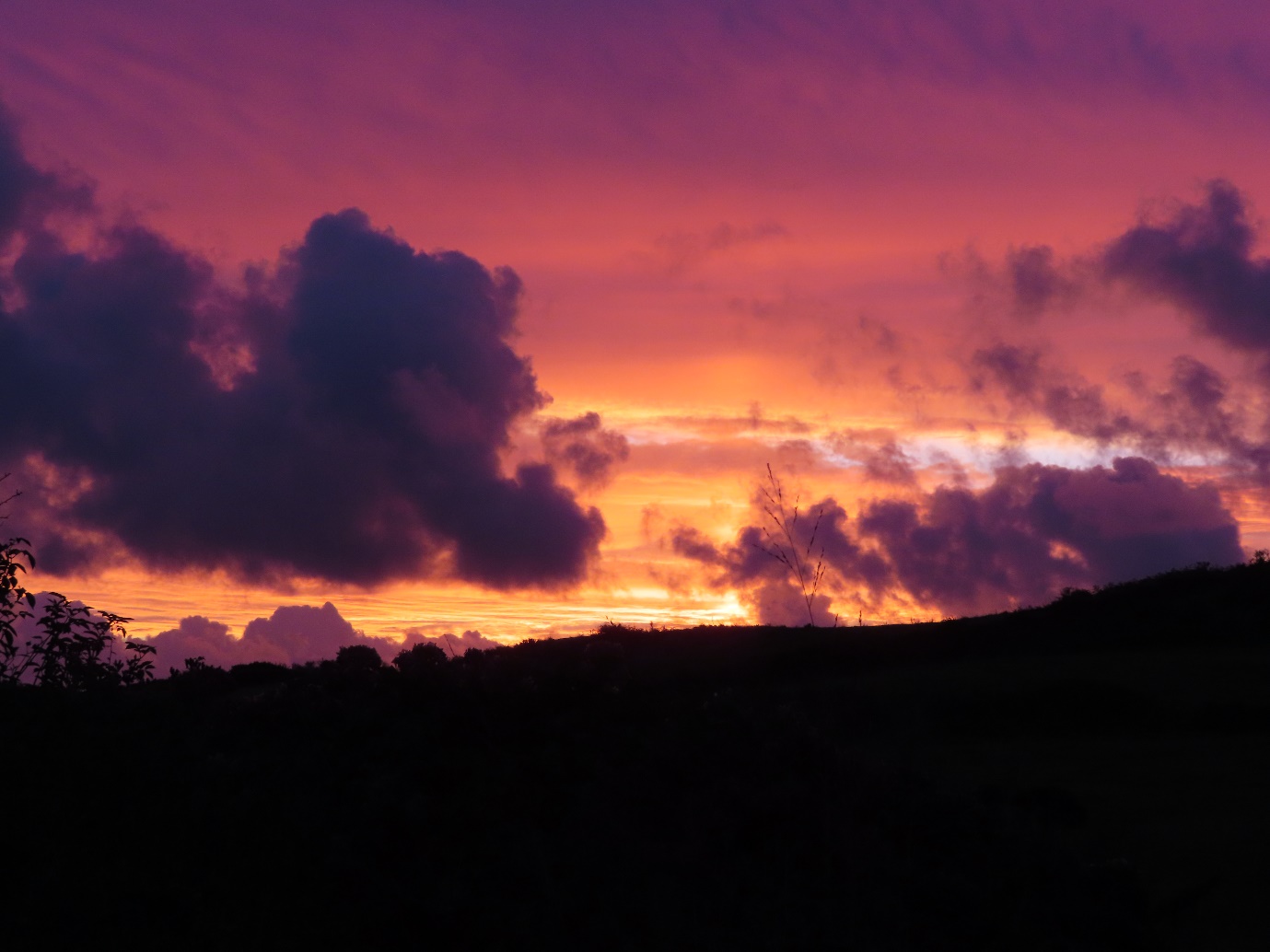 Normality has returned at last. The wind is howling in the chimney and the rain is streaming down the windows drowning out the sound of the seals. (That is if they sing in stormy weather). It is still very mild, but at least the plants are getting a good soaking. The long dry summer has been food for thought and I have been studying my plants with extra care to see how they have been holding up. The trees and hedgerow at the bottom of the field are thriving as the ground is probably permanently damp. It will be next spring before I see how the trees in the copse at the top of the hill have fared. 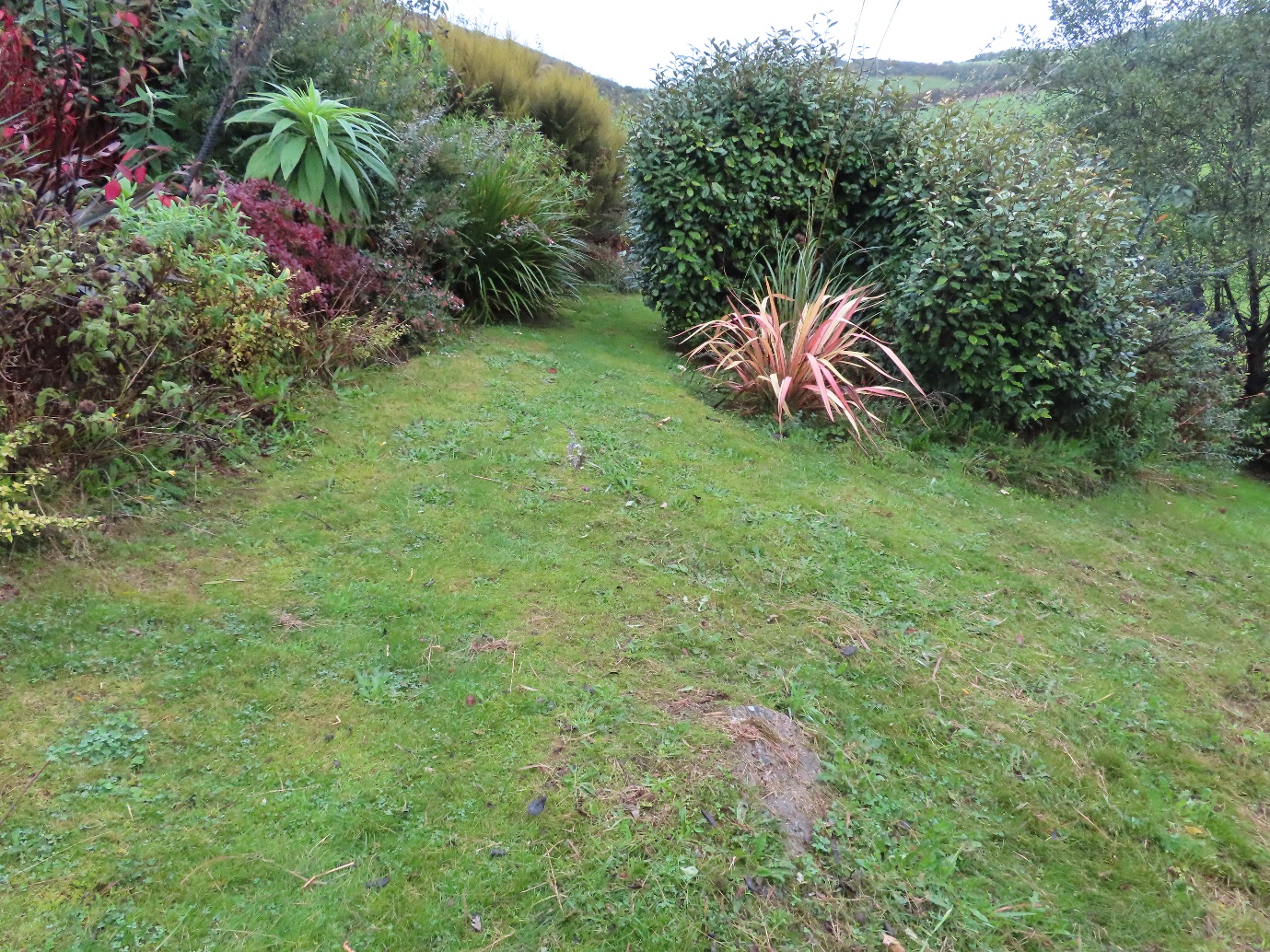 When I moved here, this part of the garden was an open space with the copse to the left and a steep hill leading to a barbed wire fence to the right. I have covered the area with four small shrubberies separated by grassy paths. In the last two years the long, dry spells mean that the grass at the top of the hill has dried up and exposed the rock that lies just inches beneath the surface. You can just see a slight ridge or rock which is becoming more prominent each year. I suspect that the trees in the copse are growing in a shallow bed. I am concerned that the Italian alder that has died managed to thrive despite the exposure to the elements but has not been able to deal with the combination of this and less moisture. As it is the first line of defence for the other trees I am now concerned as to how they will fare in the coming years. My selection of replacement trees will require both research and careful consideration. 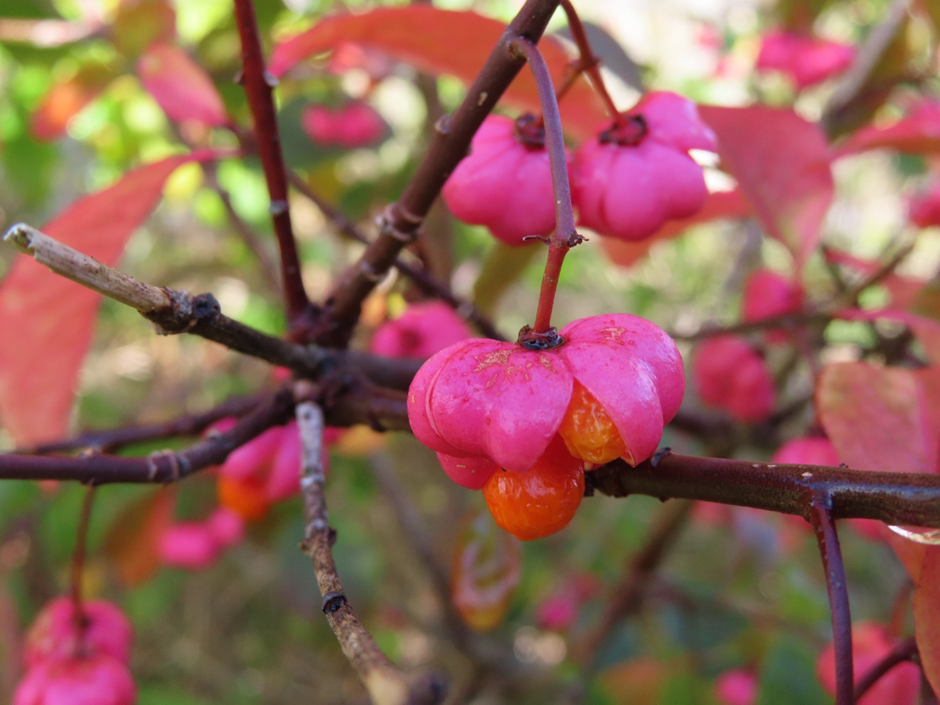 On a positive note, there is still plenty of colour in the garden and the seeds of the Euonymus europaeus (Spindle bush) attracts wrens, robins and blackbirds to name just a few. I had noticed that most of these creatures feed from the hedge at the side of the house at dusk. I had assumed this was because of its proximity to the house and the ‘to- and fro-ing’ of myself and the dogs. Today I watched a variety of birds head for the hedge only to be run off by an indignant territorial robin. He did not seem daunted by the size or number of the opposition and had the hedge to himself as long as I was watching it. I am now assuming that the other birds can only feed in comfort when he has retired for the night suitably stuffed. 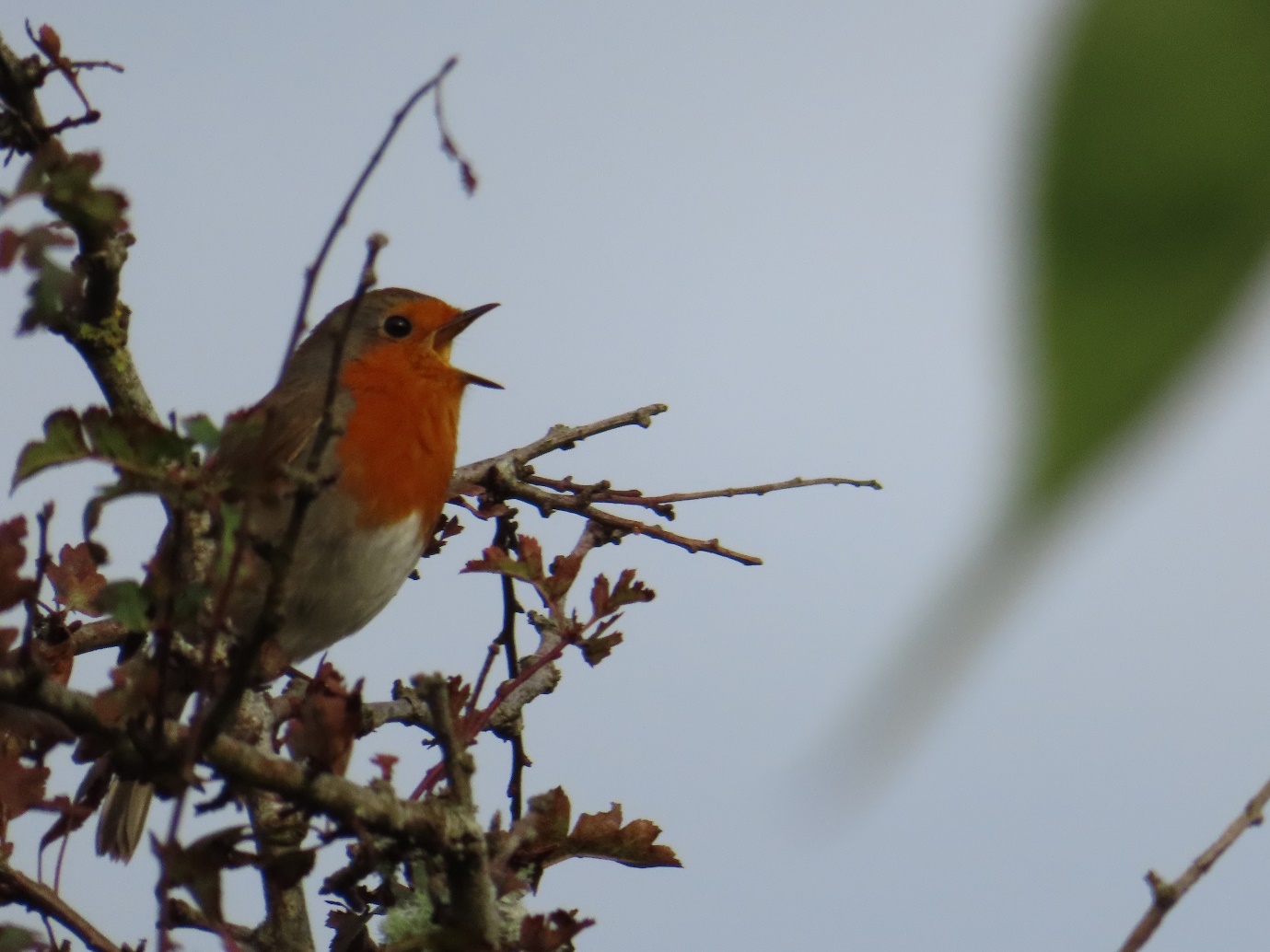 I am not usually this lucky but I managed to catch this robin in full song. They may be bullies in the garden but their song is divine. 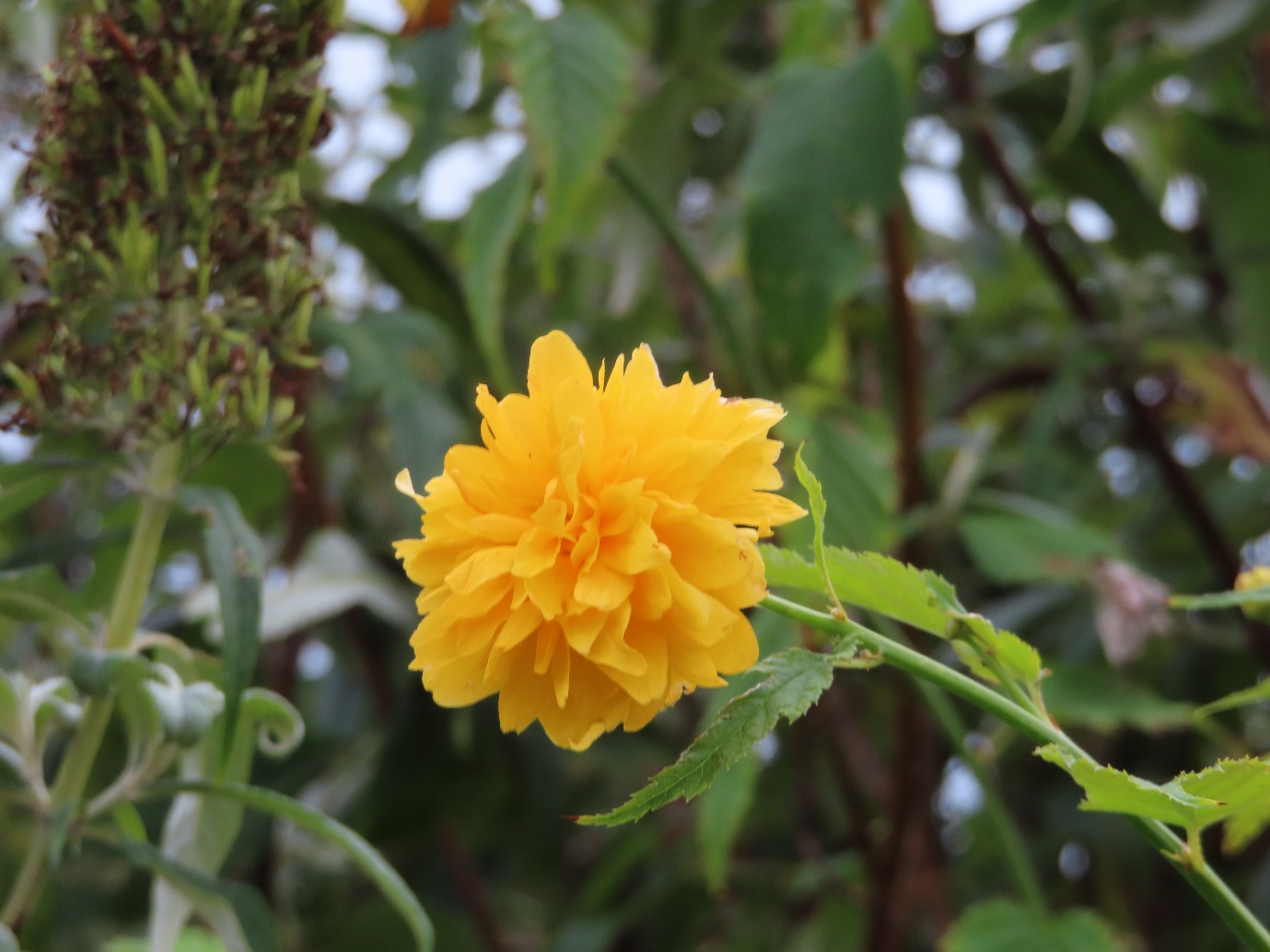 The mild weather is confusing a lot of plants and the Kerria japonica (above) is no exception as it seems to think that it is early spring. This is one of my favourite shrubs from childhood and I have had one in all of my gardens. I planted it here with trepidation, but it is thriving. It has been slightly crowded by a number of other shrubs but this seems to have been to its benefit as they probably protect it from both the salt and the wind. 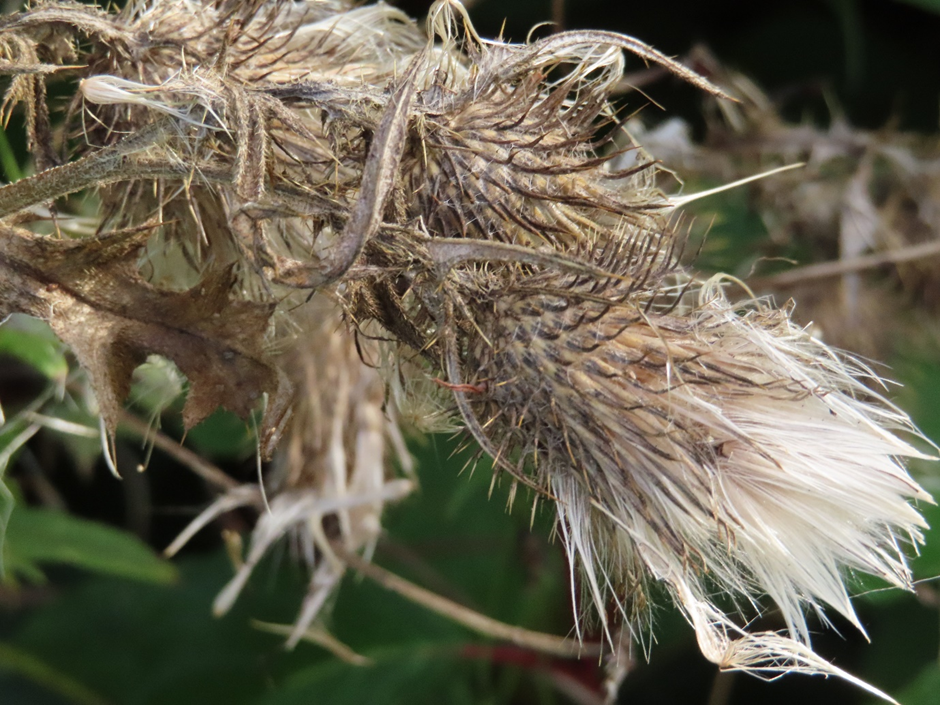 Many of the wildflowers are still in flower but this thistle still provides interest as it sheds its seeds and I can’t bring myself to relegate it to the compost heap just yet. 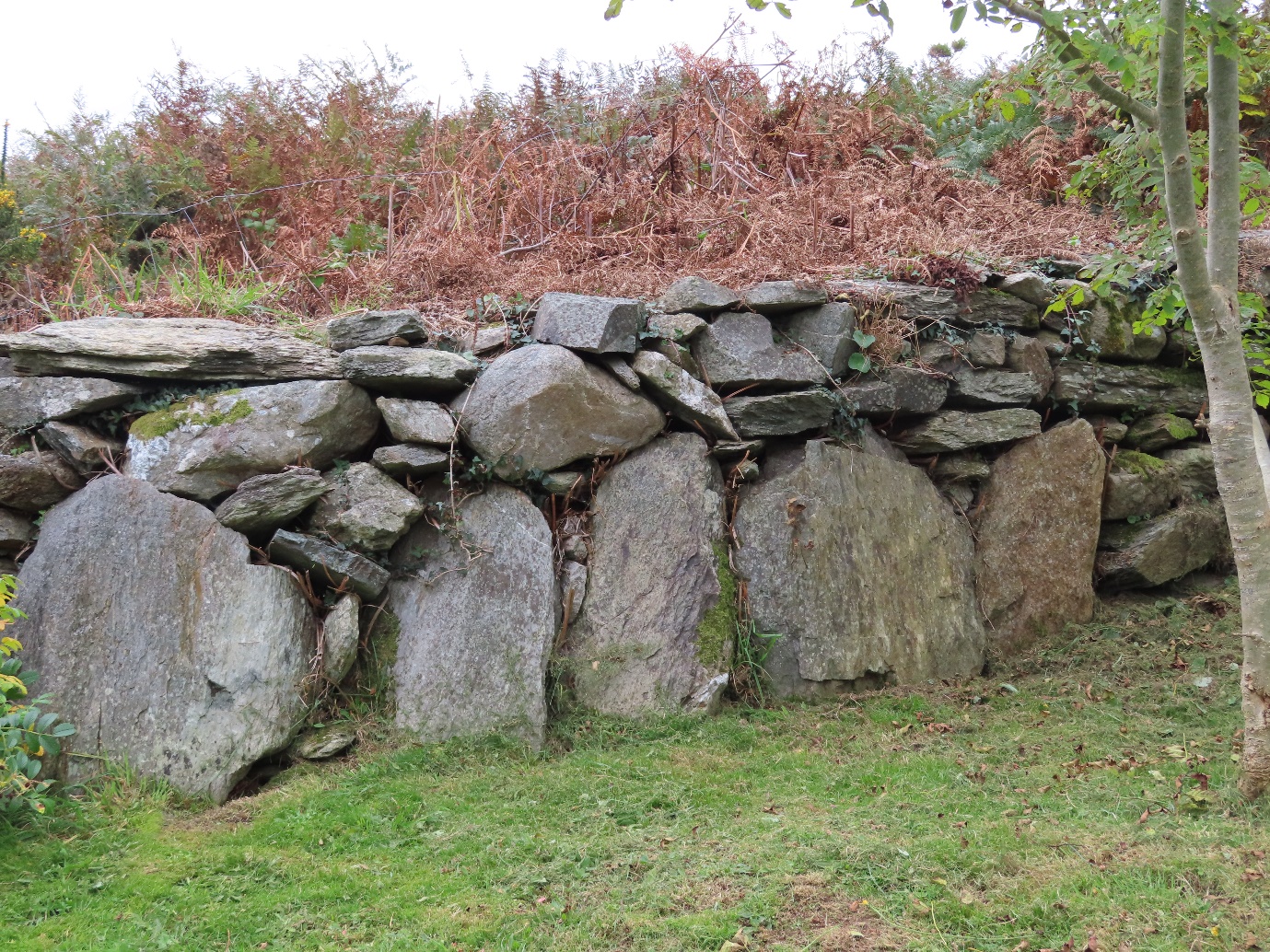 I love the old stone walls that surround the property and the new ones that I have used to convert a bare field into small gardens. They all have their own beauty and the decision to cover up one to provide shelter is a difficult one. The above wall is part of the original boundary to the property and must have taken a lot of effort to construct without our modern machinery. It reminds me of the ancient tombs that dot this area. I have no intention of covering it up even though it means that visitors are blasted by the north west wind that comes screaming over the top in winter as they walk up the drive. 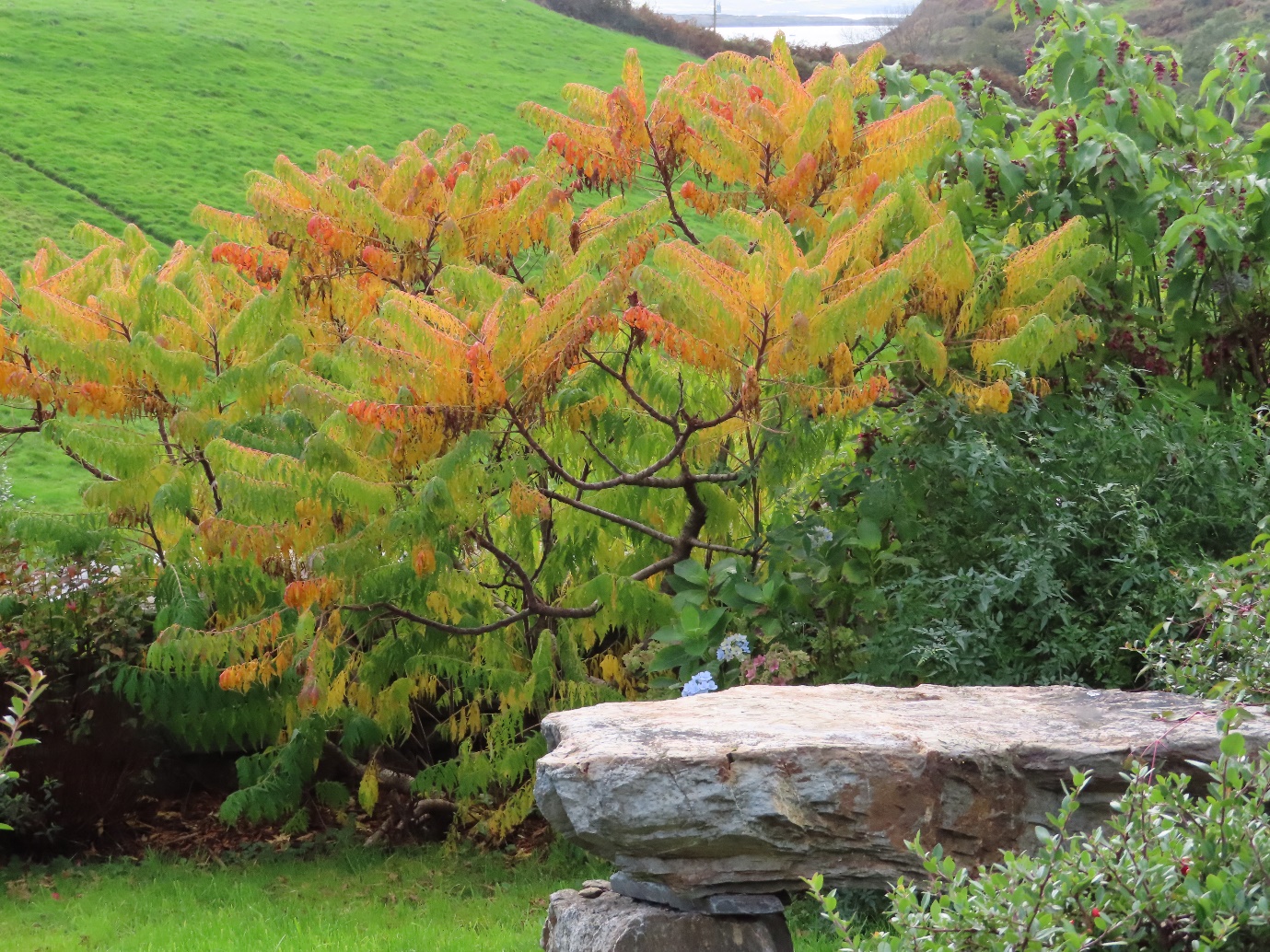 My prehistoric garden takes its name from the table that was created from some of the stones dug from the soil when the garden was being created. It is a multi-purpose item as the dogs use it to scan the valley for invaders. In fact, all of the walls serve this purpose. They are also perfect sunbathing areas for butterflies and feeding stations for the birds. 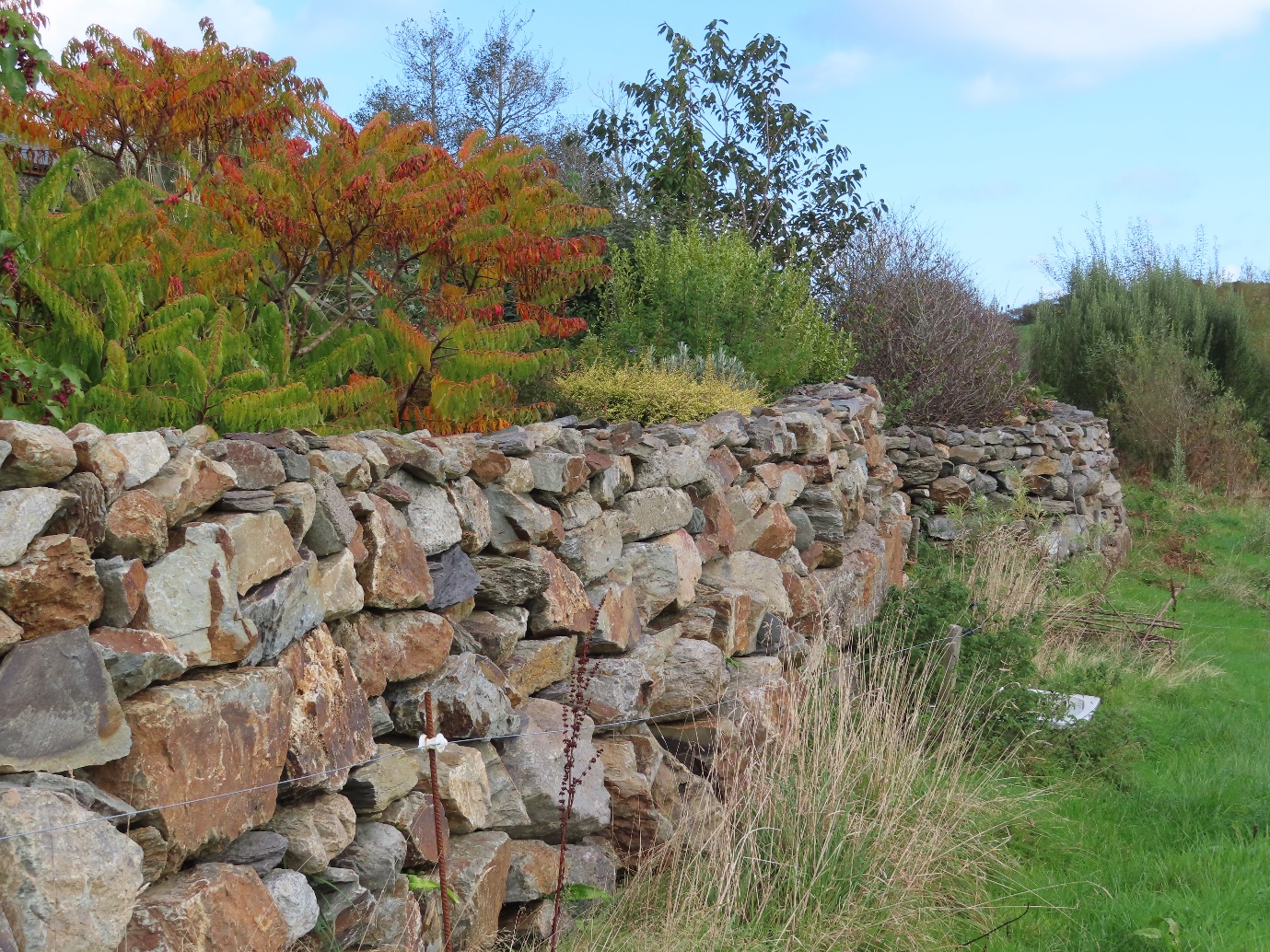 This is the wall on the south side of the prehistoric garden. It is almost nine feet high in some areas and would have taken months to create without the help of modern machinery. 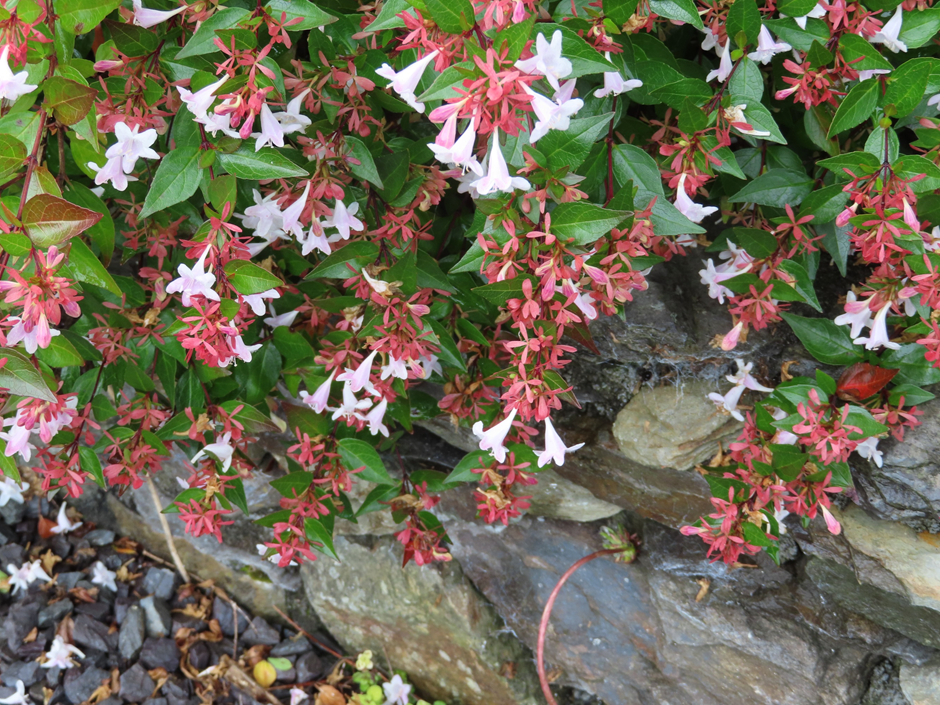 Almost anything looks good against a natural stone wall and this Abelia grandiflora is no exception. This is one of the more robust shrubs in the garden. It flowers for a long period of time and is still attracting bees on sunny days. It also happens to be beautiful even when the flowers have faded and grows well from cuttings. What more could you ask from a shrub? 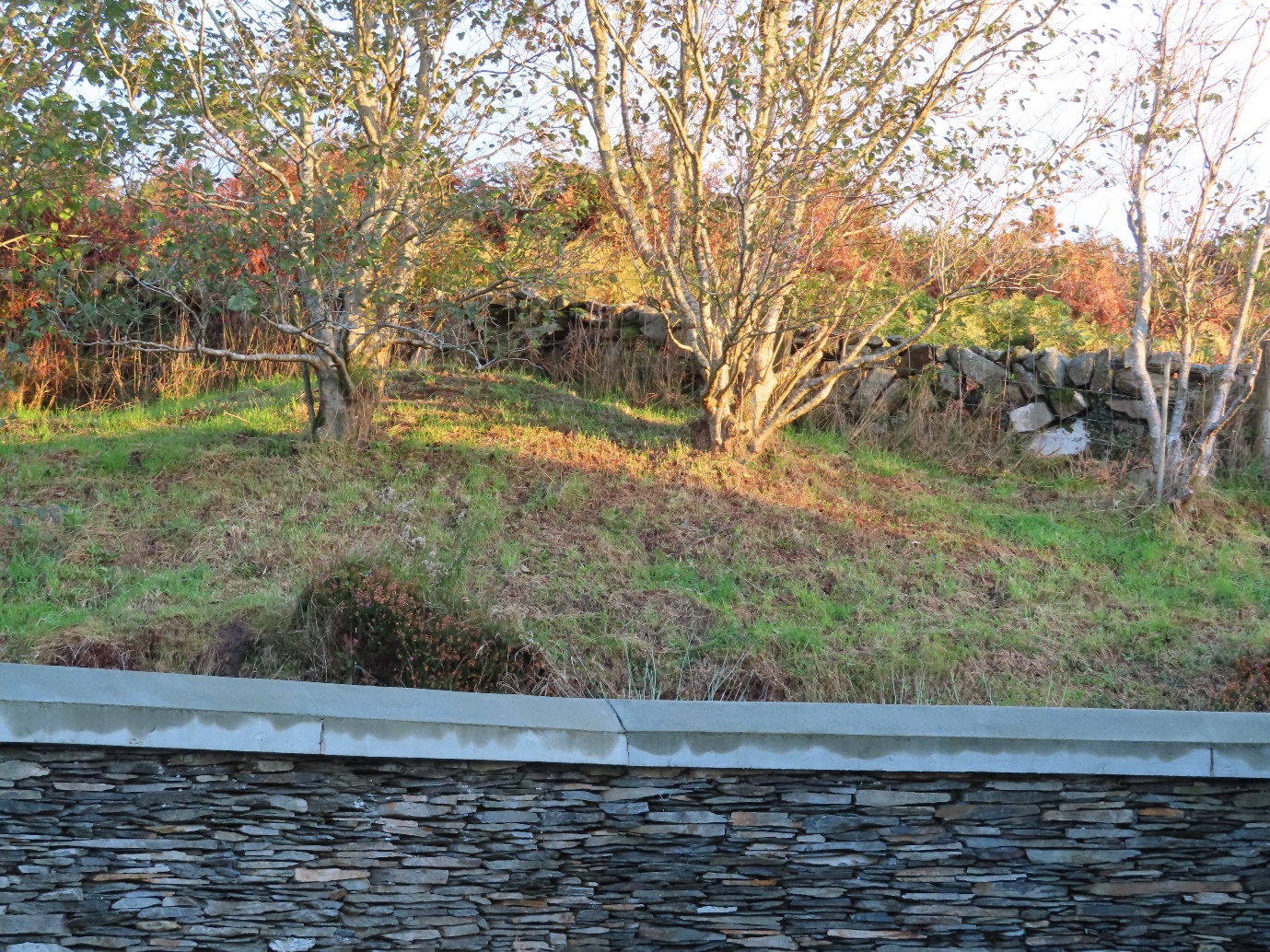 I have been very lucky to find some excellent stone masons to help me with the various walls in the garden. At the front is the new traditional semi-drystone wall that is a haven for insects and leaf-cutting bees. That is until the birds find them. The original dry stone boundary wall at the back has been repaired in the style of the original wall. The large spaces provide quick entry and exit points for the rabbits and hares that plunder the garden but are not large enough to allow the dogs to give chase to their disgust. 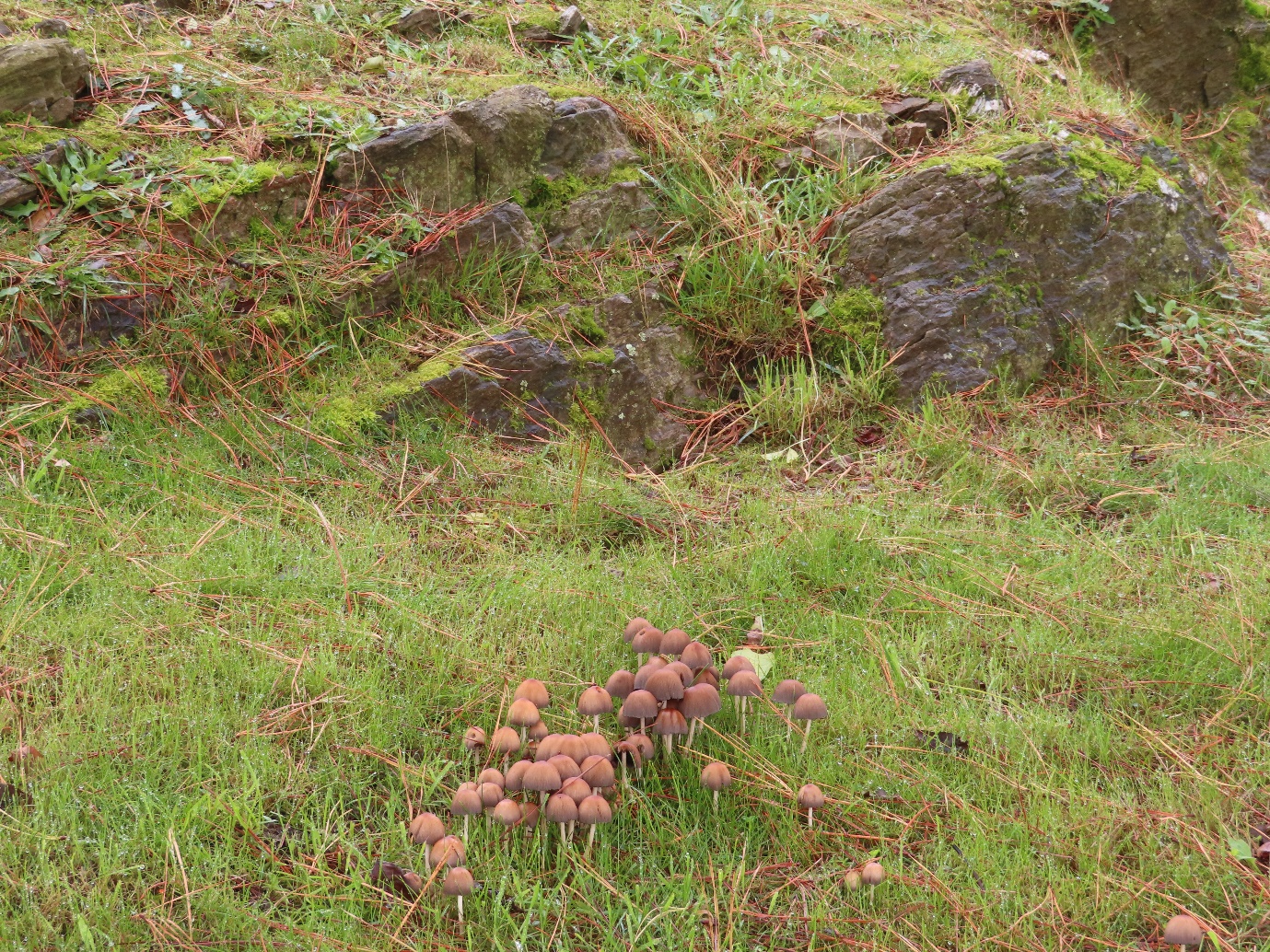 I have cut the grass in the wildflower areas and after hours of exhausting raking have been rewarded with a profusion of mushrooms. I am still struggling with the art of identification and have realised that fungi change their appearance considerably over a few hours. I think that these are glistening inkcap. I exposed the stone outcrop in the background a couple of years ago when I though I was clearing rubble from the construction of the drive. This is another area that needs no enhancement and it also makes a convenient seat with a view out to the bay. I took the second photograph a day later. It is hard to believe that they are the same fungi. 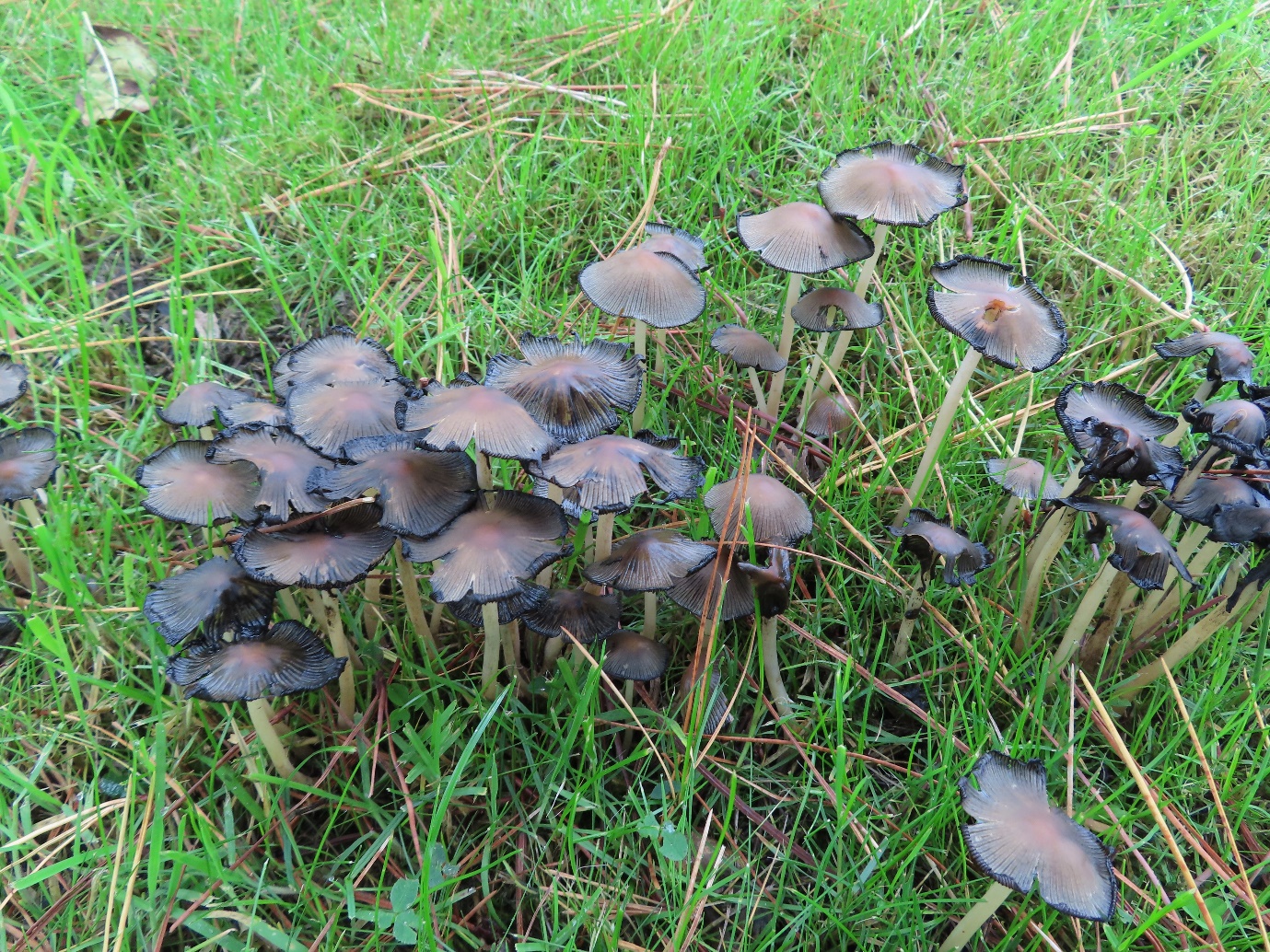 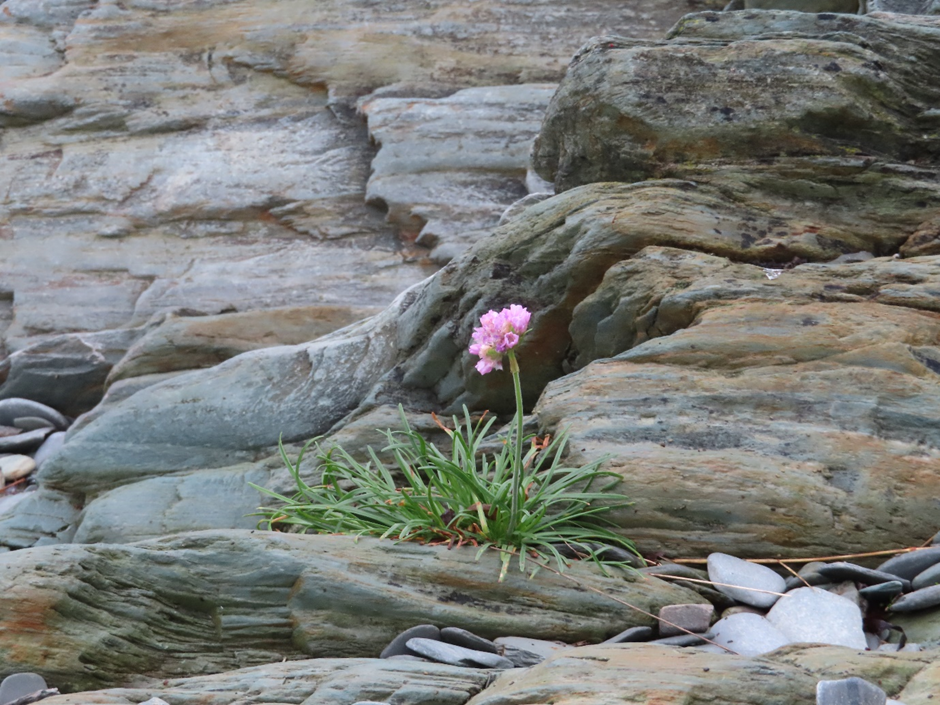 I saw this this sea pink a few days ago in the cove below the house. It must often be covered by the high tides but still prevails. The natural stone work is a work of art. In the end no matter what we do nature will always trump our best efforts.