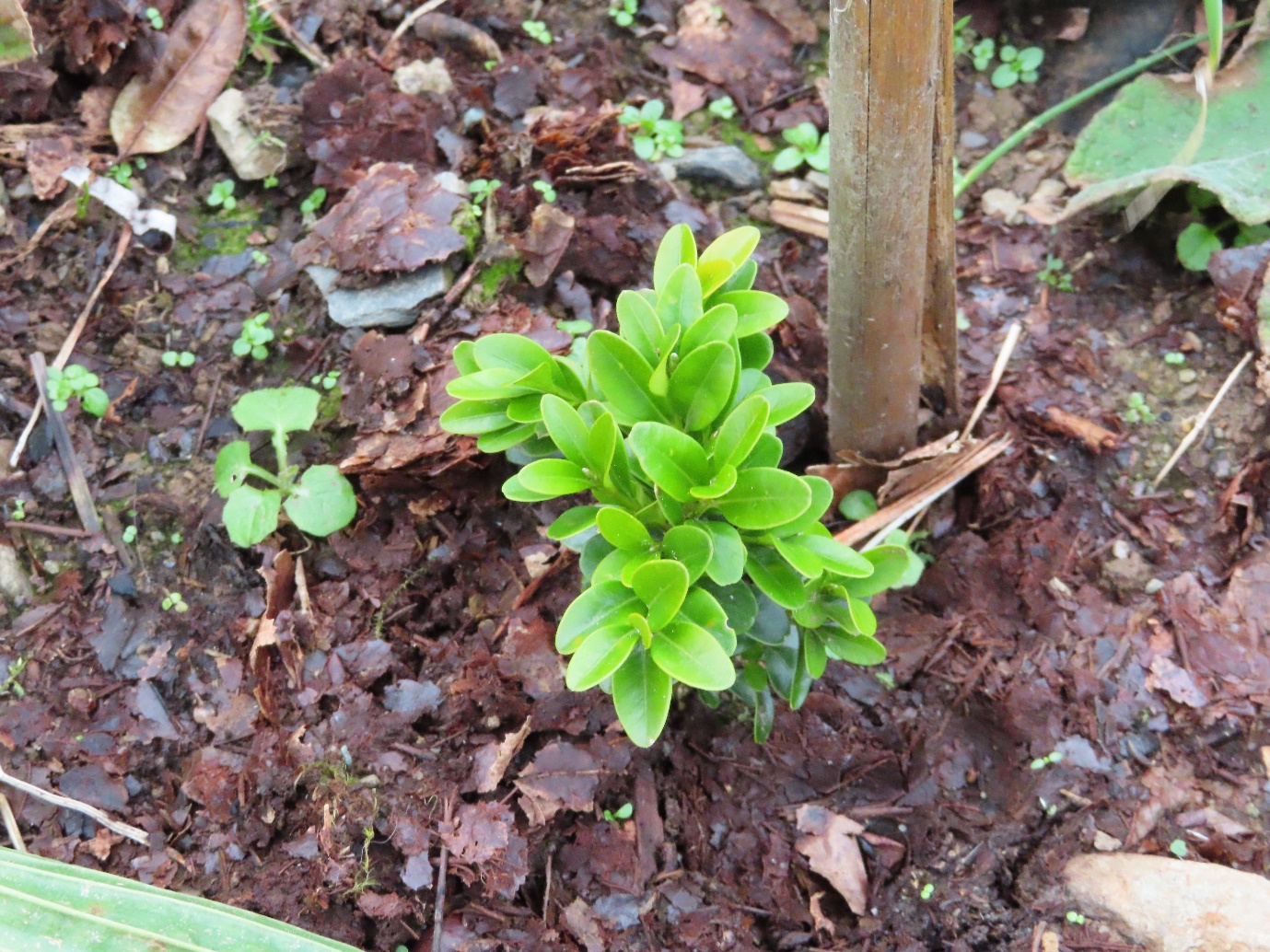 This plant may not look like much, but is a testament to its resilience in the face of human neglect. I have always loved box hedging and the smell instantly transports me back to childhood. In one of my gardens in Scotland, I managed to produce a full hedge from the cuttings of one plant. As soon as I had the time, I started the same process in this garden and had visions of my future fruit garden surrounded by a scented hedge. The imagined shape varied as I toyed with the idea of cloud pruning but first, I had to grow some plants. To my dismay, the 18 cuttings that I took did nothing despite my tender care. While I could not bring myself to dispose of them, I relegated the tray to the back of a bin in the garden and promptly forgot about them. I found the discarded tray two years later with the cuttings looking no different to when I last looked at them. But, at the same time, they did not look dead either. I decided to give them one last chance and planted them in the shade in a raised bed full of mint last summer. Within weeks they showed signs of life and they are now finally in the fruit garden where they seem equally happy. It is at times like this that I believe gardening is part magic and part miracle. 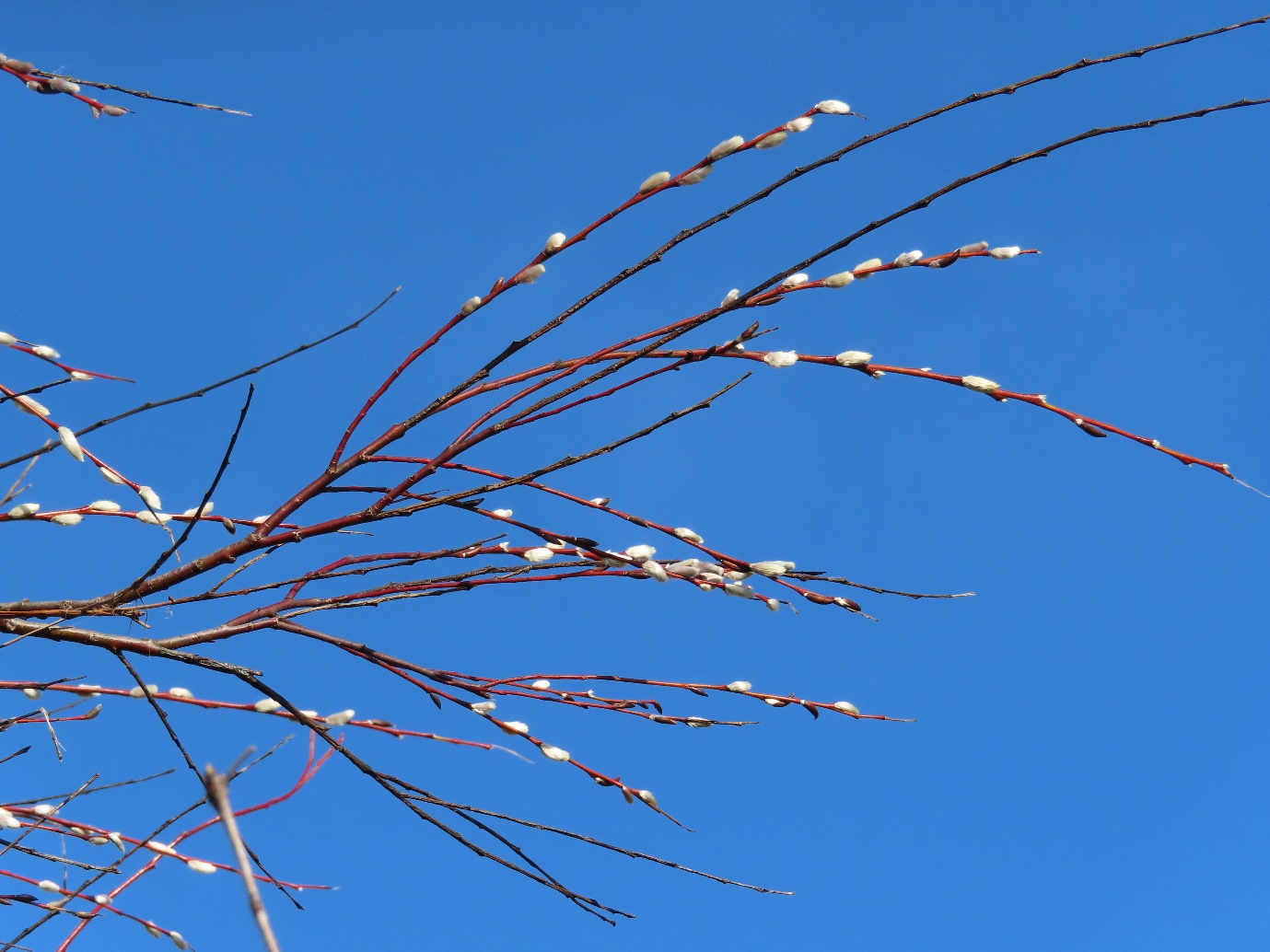 The willows are just starting to grow again and the fluffy white buds make a dramatic contrast against the blue sky – whenever we have one. This is from an old tree in the garden that can look tired and battered at the end of winter but each year it revives although always in a new shape. I may try and plant a few replacements soon as I don’t imagine that it and its companion can live forever. Surprisingly, this is the one willow that I have not had any success in reproducing from cuttings. Even worse I am not sure what it is so I can’t go out and buy some bare root plants. 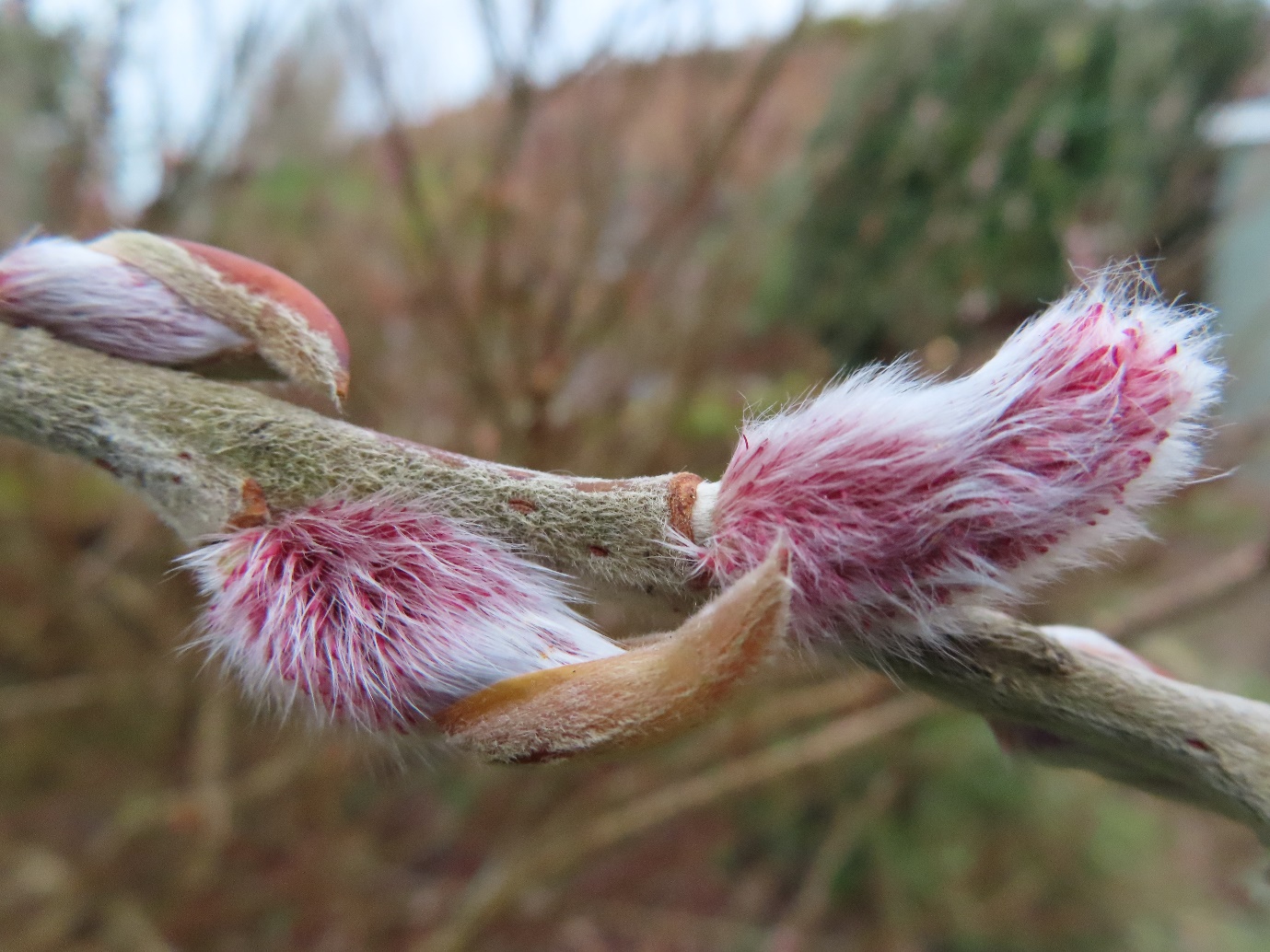 This has to be one of my favourite willows. Before they emerge fully, the Salix gracilistyla ‘Mount Aso’ catkins look like a fluffy bird or perhaps a pair of slippers. I believe that this is a relatively new plant. It is also unremarkable for most of the year but I think that the catkin display makes this an important plant in the garden as it would cheer anyone up on a dark dull day in winter. 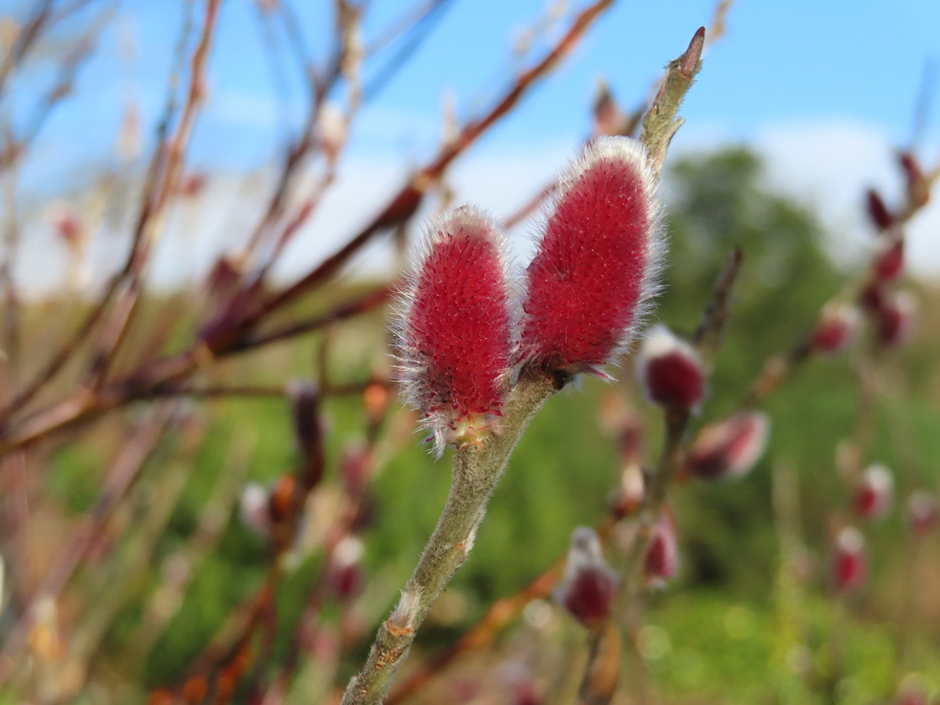 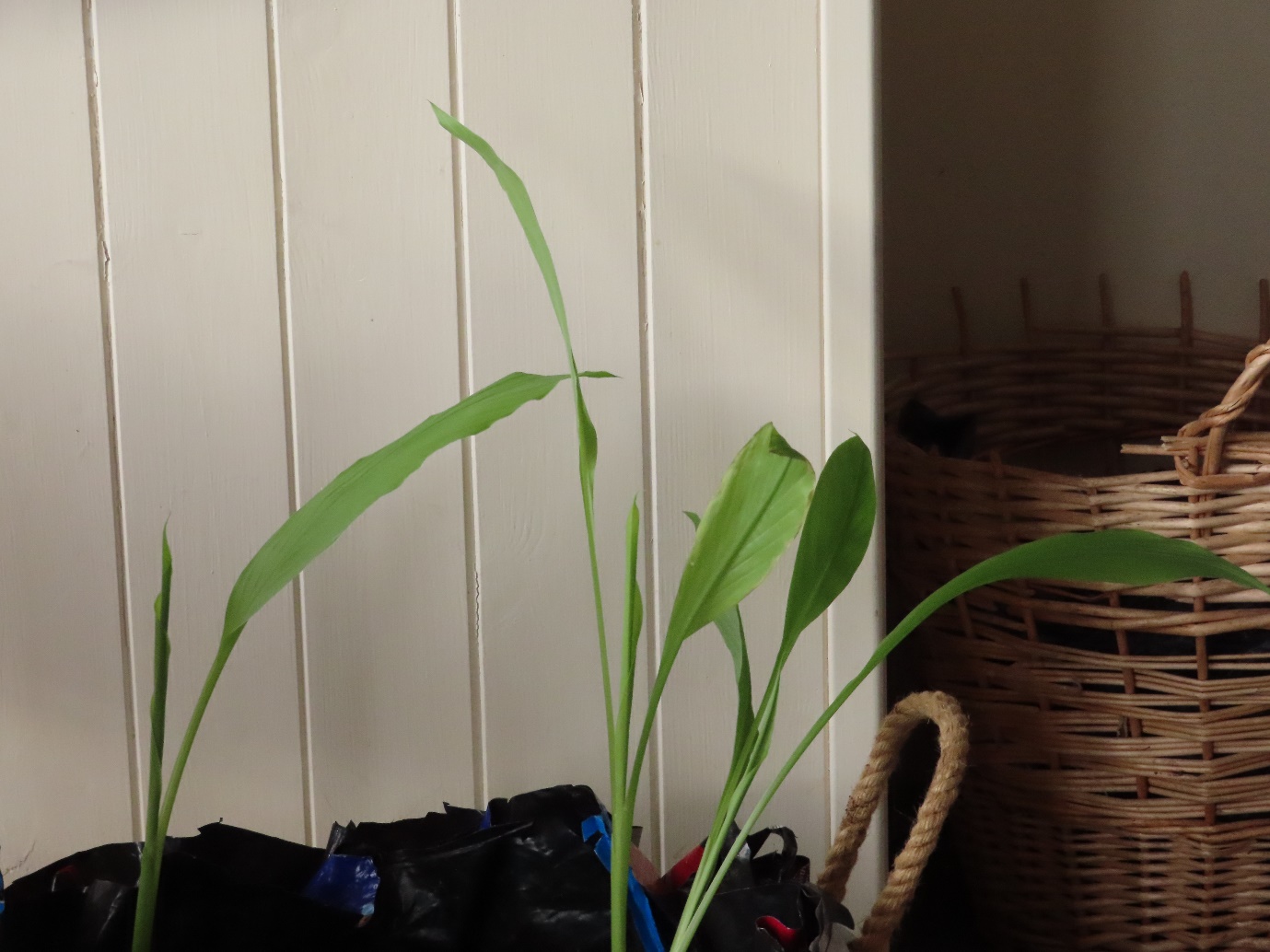 I never seem to have much success with indoor plants with the exception of Christmas cacti which I grow in memory of my mother. This picture may not look very exciting but it is to me, as it is three turmeric plants which I have grown from the roots of my last plant. Another one is doing well on the windowsill. I can’t understand how I am managing to grow these but I love the fact that I can use my own crop to make my reviving drink after a bracing swim in the sea. I have decided not to research the plant as I am likely to kill it once I try to take a professional approach to its care. 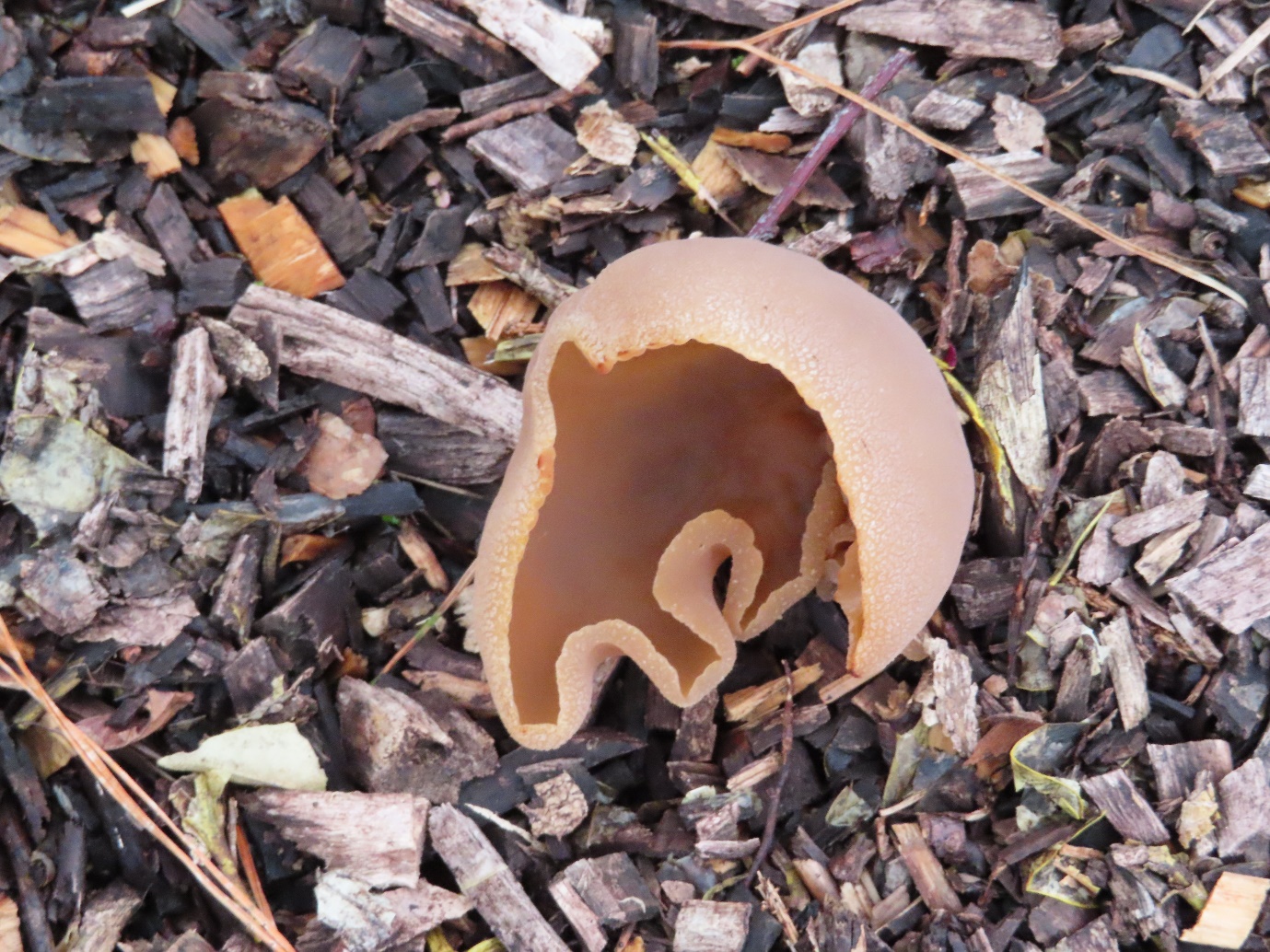 These cup mushrooms have appeared overnight in my recently mulched fruit garden and have now taken over most of the free space. I am hoping that this is a sign that the soil is fertile as it has had a lot of care since I created the garden some years ago. 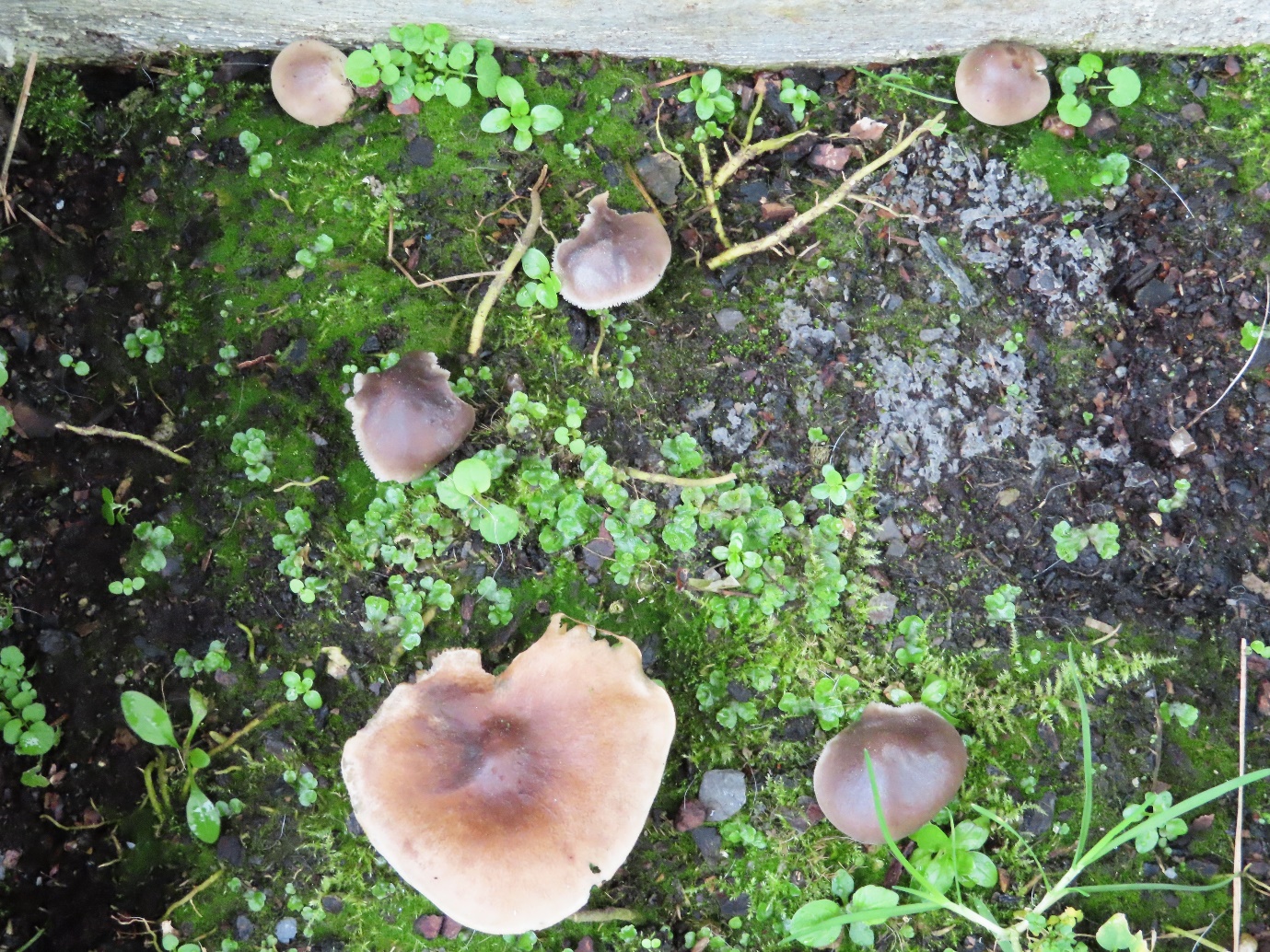 Another small black mushroom as appeared in one of the pots outside the house. In these two photographs you can see how much these can change as they mature. They are now a creamy white and almost flat and I suspect that they will not last much longer. 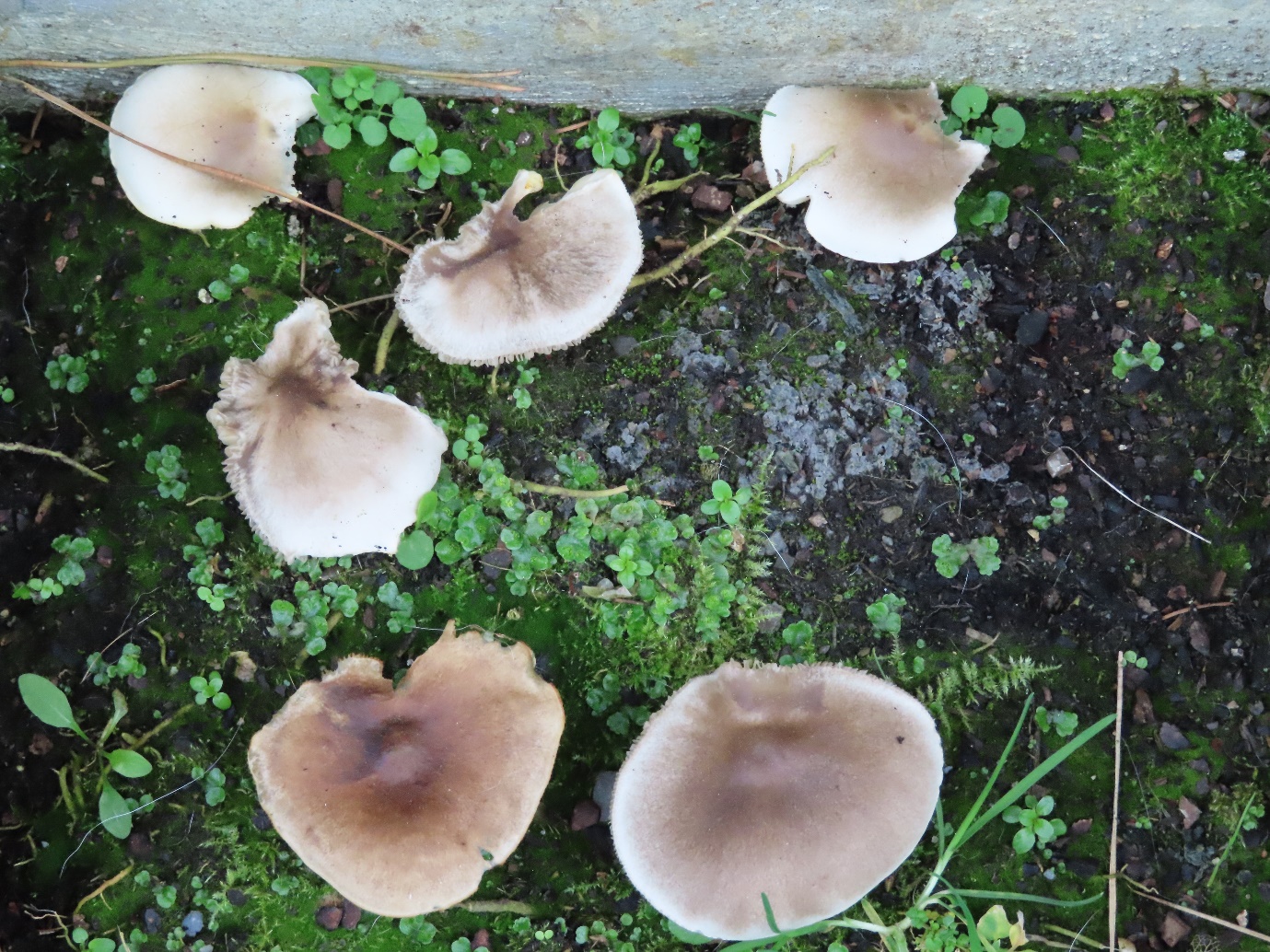 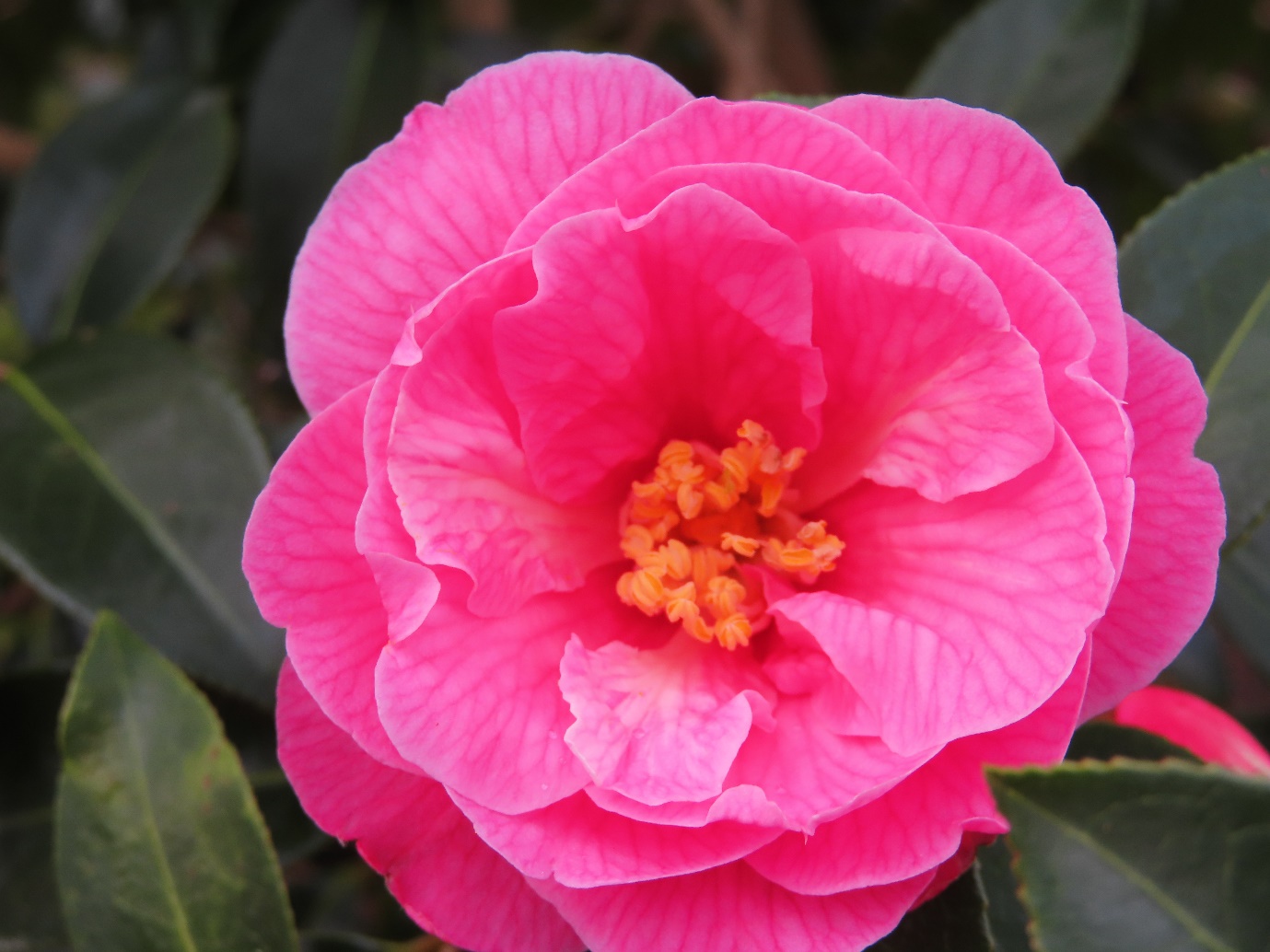 A friend who has created a magnificent garden here in West Cork once told me that you can plant camellias almost anywhere. As she had over 50 years’ experience of gardening in West Cork, I took her at her word. I now have over ten varieties in the garden. Some of the plants are still young but they are covered in buds and blossoms at the moment and the colour in the midst of winter is heart-warming. 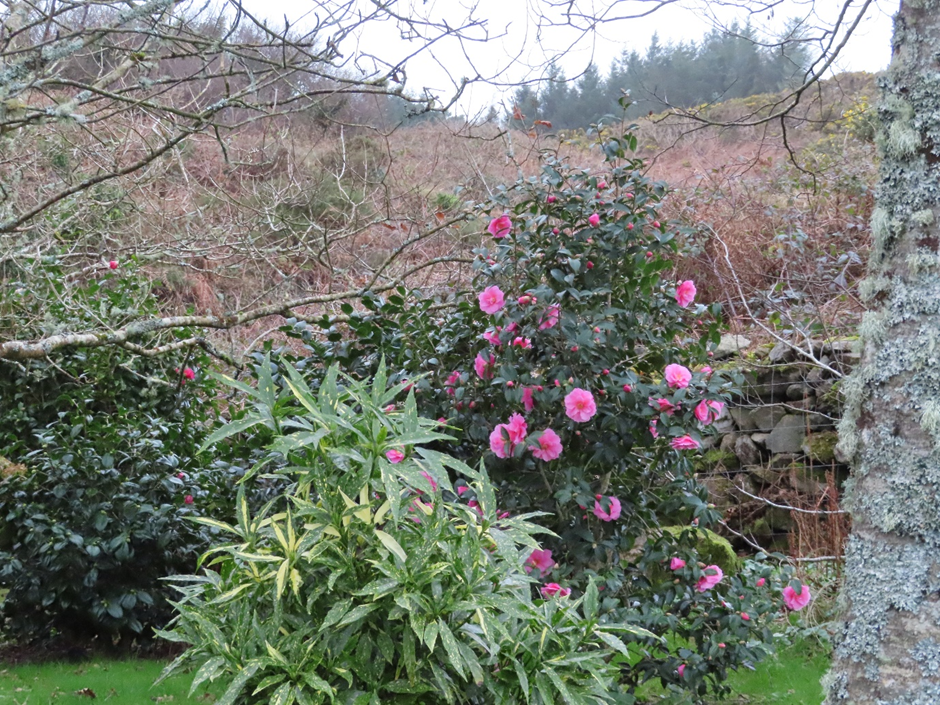 I love the contrast between the trees and the natural landscape of gorse and bracken on the hill behind the house. This young camellia is in a sheltered position but some are not and are doing equally well. Rhododendrons are much more delicate and I am using camellias to provide them with some shelter. 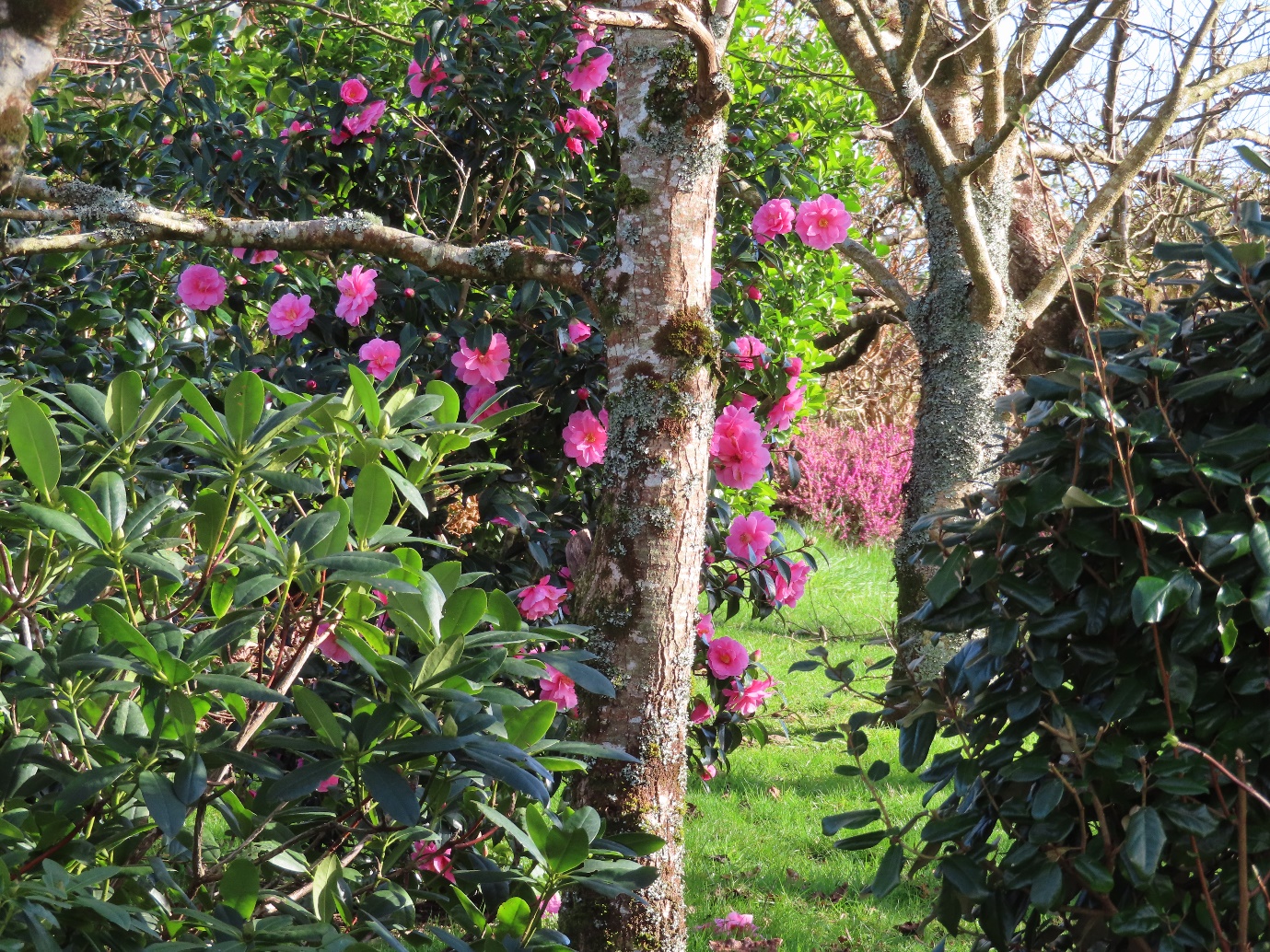 The same camellia providing a contrast with the winter heather in the background. 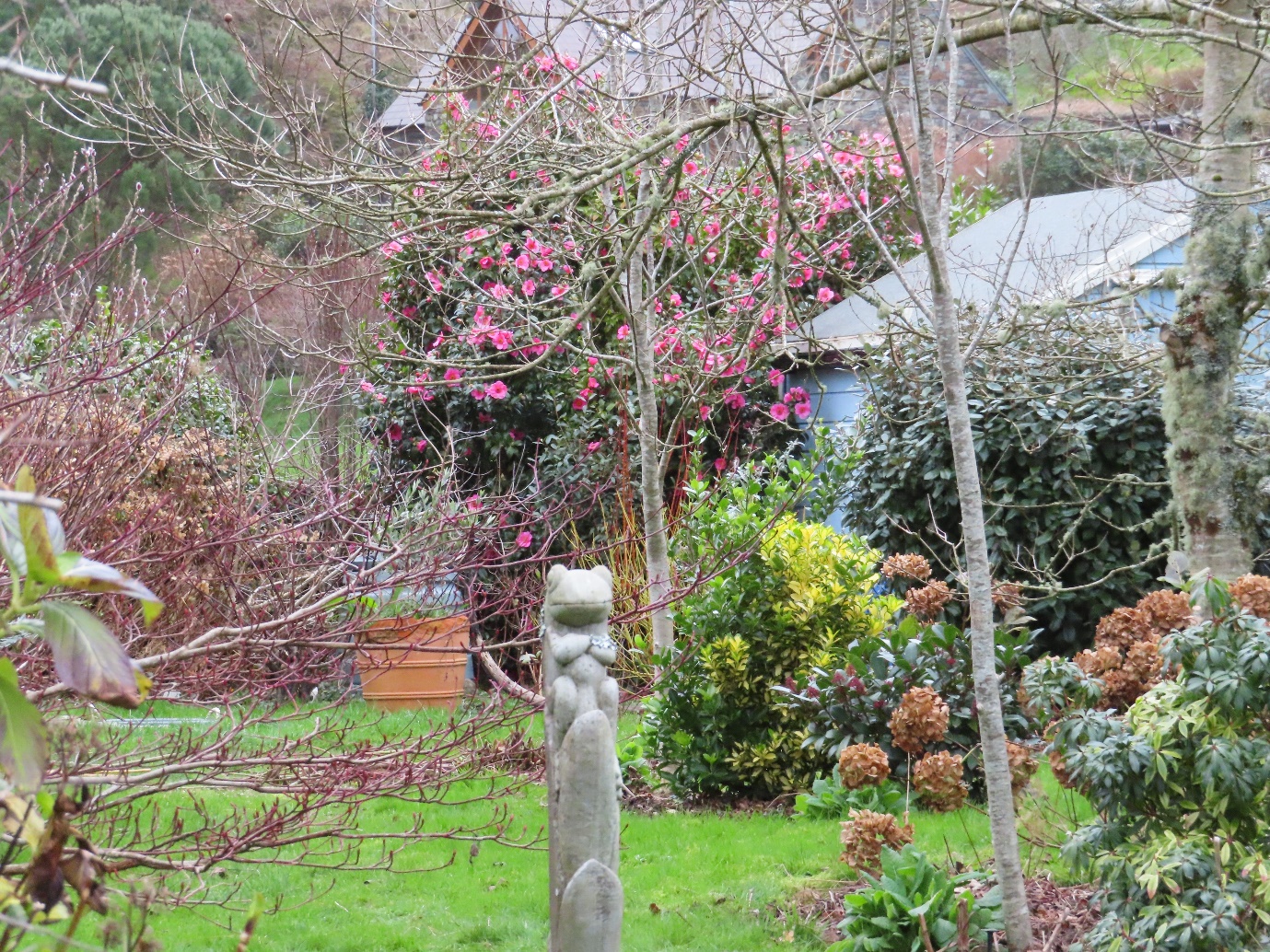 This is the oldest camellia in the garden as I planted it when I moved here eleven years ago. I had bought it two years previously and it had lived in a pot for that time. I placed it in a temporary position by my boundary wall, but it took to the position and I could not bring myself to move it. I hope that all of the rest will soon reach this size and be so prolific. 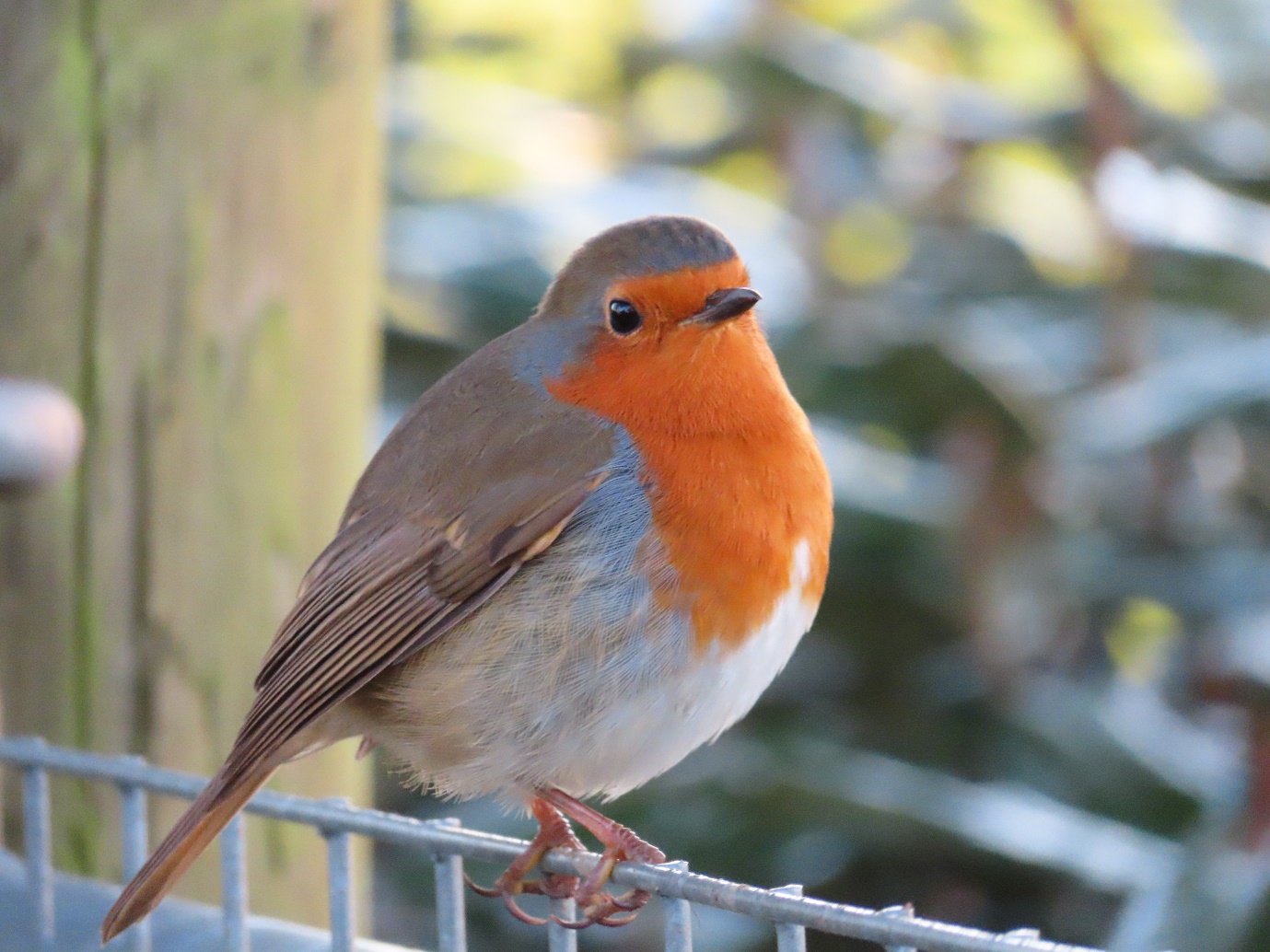 The robin that has been greeting me for weeks when I go out to fill the bird feeder has been absent since the recent storm. I have become very fond of him/her and I hope that it is safe and well. I can hear three robins singing to each other in the garden so I tell myself that my friend is one of them. I still have an adult male and female pheasant and three young females feeding from the driveway each day. I have not seen the young male for months and wonder if he was driven off by what is, possibly, his father. The goldfinches still continue to bicker amongst themselves and are greater bullies than the robins. I am trying to ensure that everyone gets enough food but may have to go back to work to support the habit. 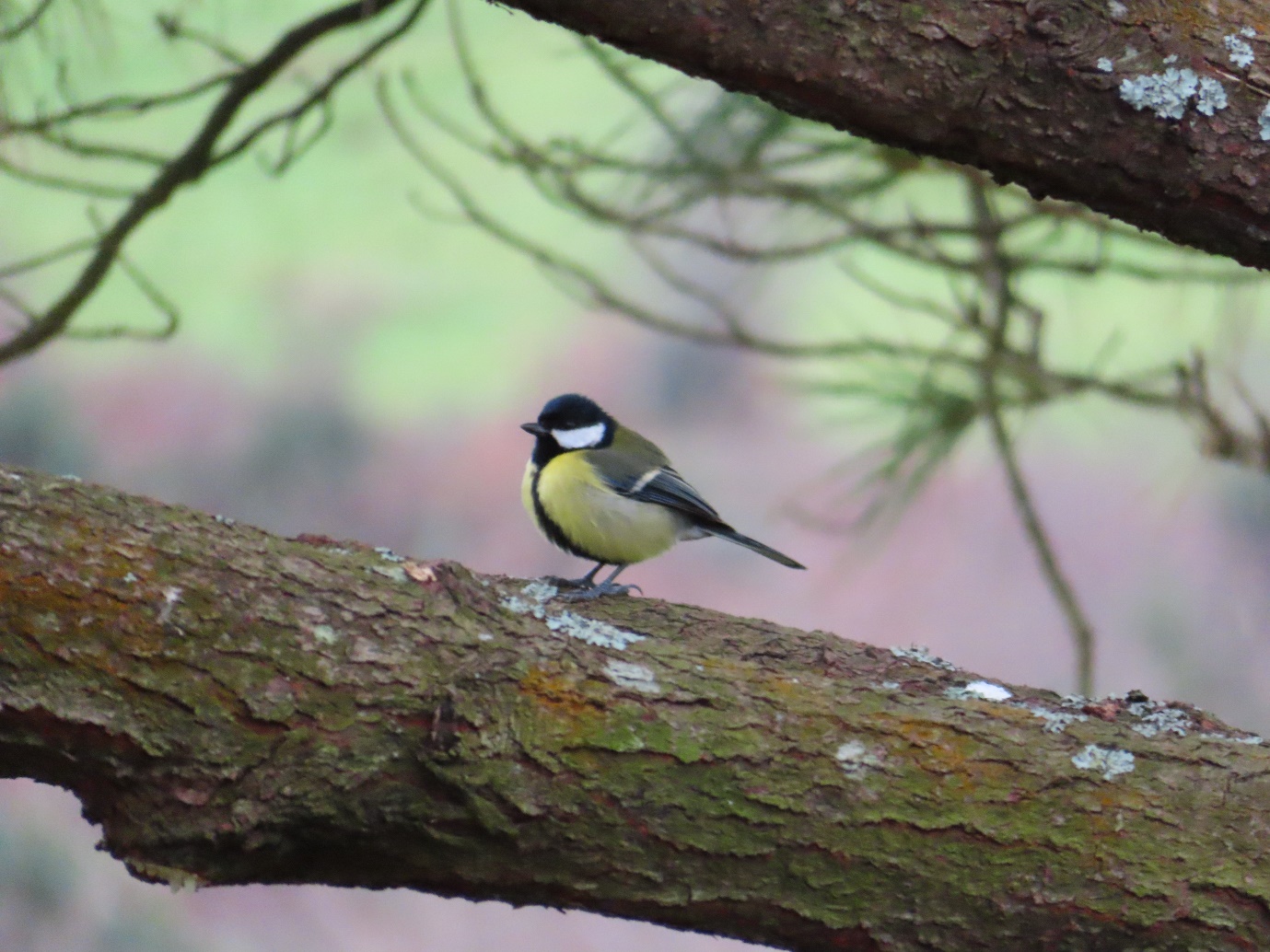 This great tit seems a little puffed up and I wonder if it is a warning for me to stay away or maybe he/she is trying to be a robin. 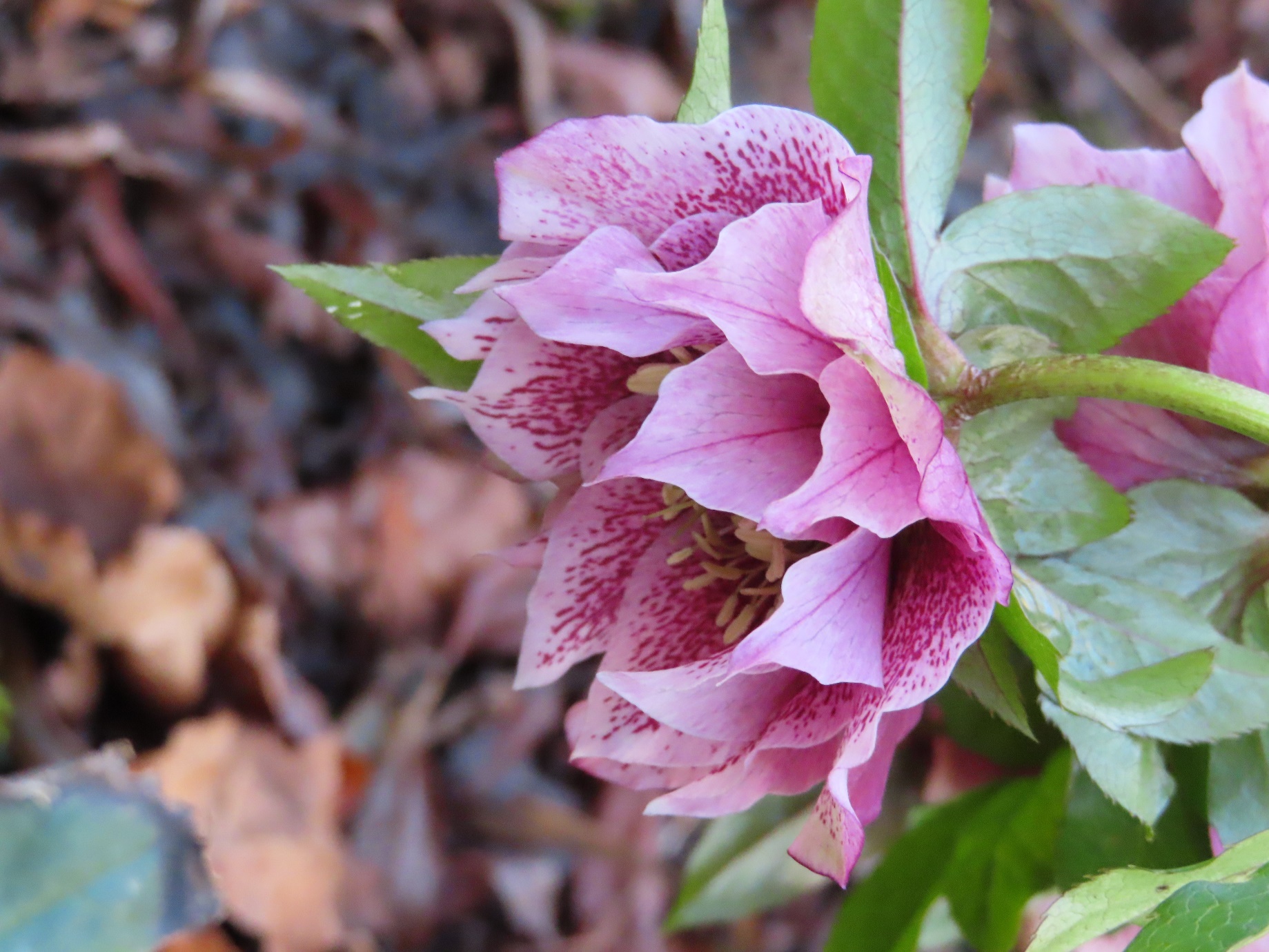 The presence of this Hellebore is a miracle in itself. Last year the plant was eaten to the ground by either a hare or a rabbit and I never even got to see the flower which is particularly beautiful. I now need to see if the other ones around the garden that have been completely covered in chicken wire for a year are as successful. I am not optimistic and will soon have to review my planting options if they have been eaten. I suppose I should be pleased that I am providing food for so many creatures but can’t quite manage it.