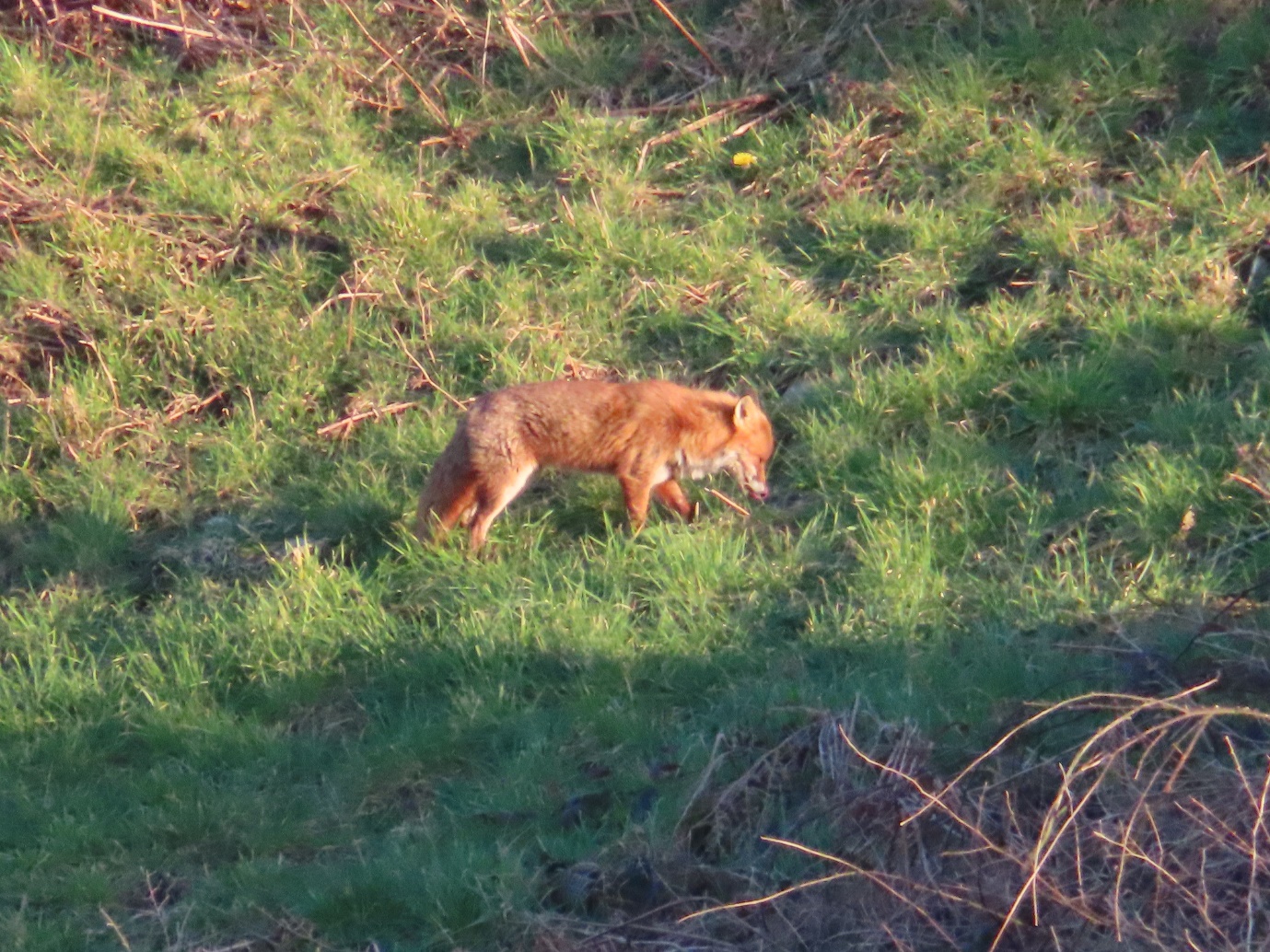 The mating season for foxes is supposed to end in February, but there is no sign of this here. My sleep is still interrupted on a regular basis by a cacophony of sounds, including screeching foxes and an apoplectic Millie (my collie terrier cross), who sees it as her duty to ‘raise the dead’ at the first sound of any potential intruder. Occasionally, she is joined by my collie Brodie who for some reason chooses to howl like a wolf. By the time they are all done I am bug eyed, frazzled and wide awake. My mood is not improved by the fact that as soon as the dogs settle down again, they immediately start to snore. Despite this, I am still very fond of the foxes and was pleased to see this one on the hillside in front of the house. They keep their distance during the day so that it is hard to get a good photograph but seem happy to roam the garden during the night when the dogs are locked up and can do no harm. 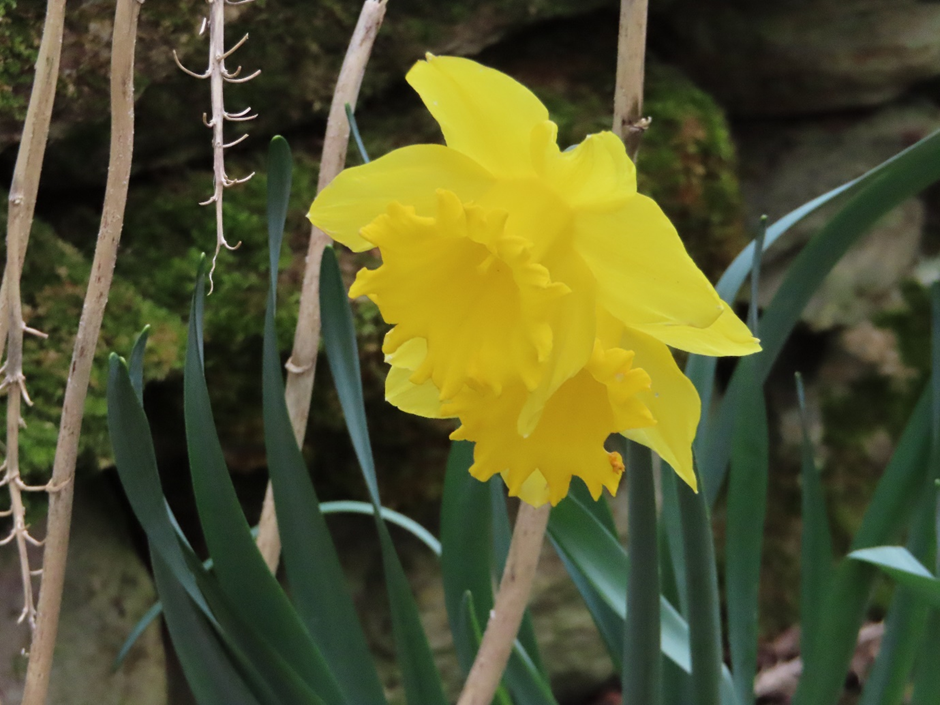 Every year I am too busy creating new areas in the garden to remember to buy spring bulbs. My first attempt to plant some when I moved here was a dismal failure and the first indication that my lovely old stone walls are a haven for mice and voles who feasted on them. This year I have become conscious that the garden needs more colour in spring and intend to try mass planting again later in the year. This is one of two varieties of daffodils that have been allowed to flower unscathed so maybe my second attempt will be more successful. 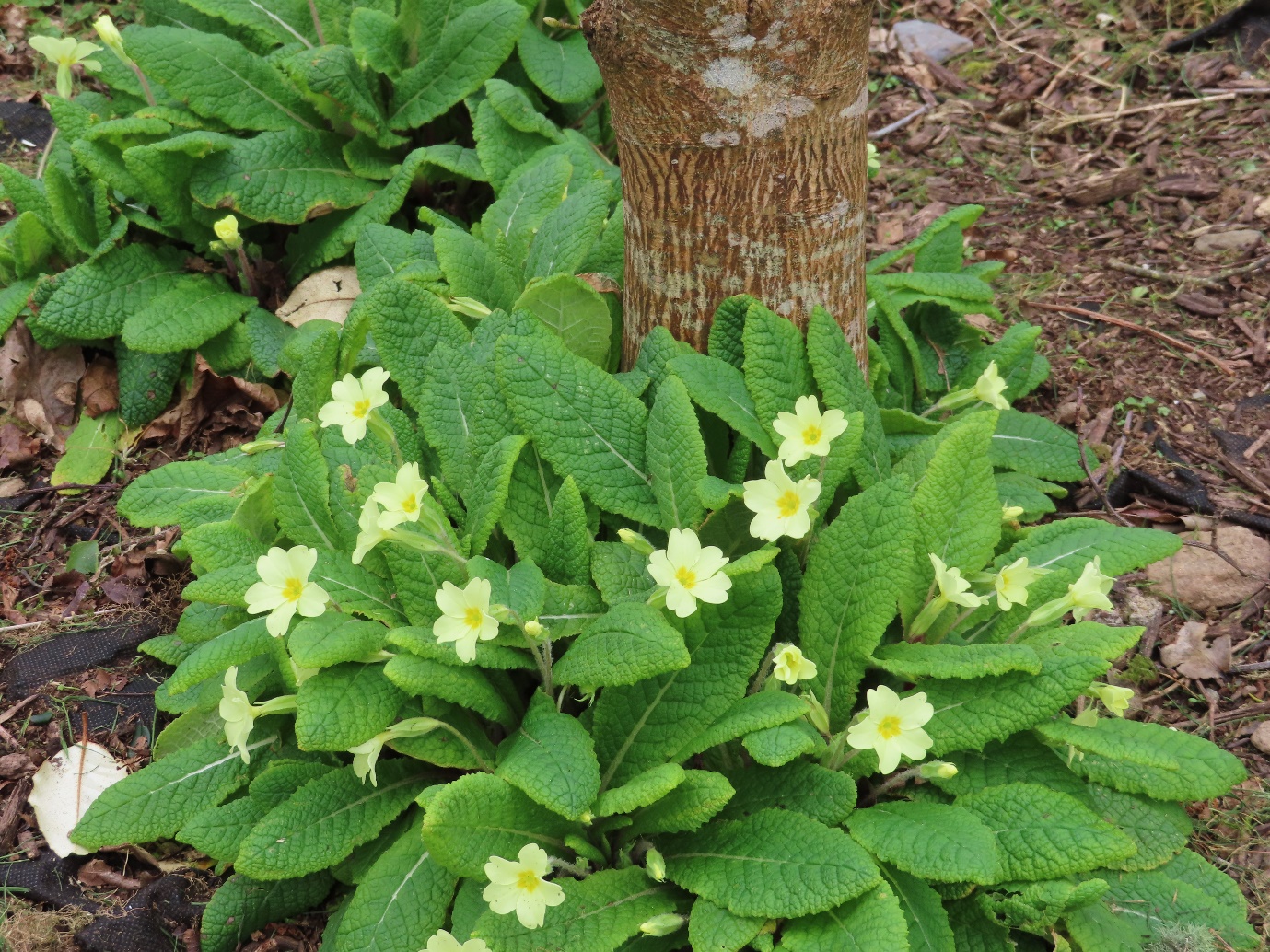 I have never needed to plant primroses as they grow naturally here and they have spread throughout the garden in large clumps. To date nothing seems to bother them and like the wild bluebells they require no care. 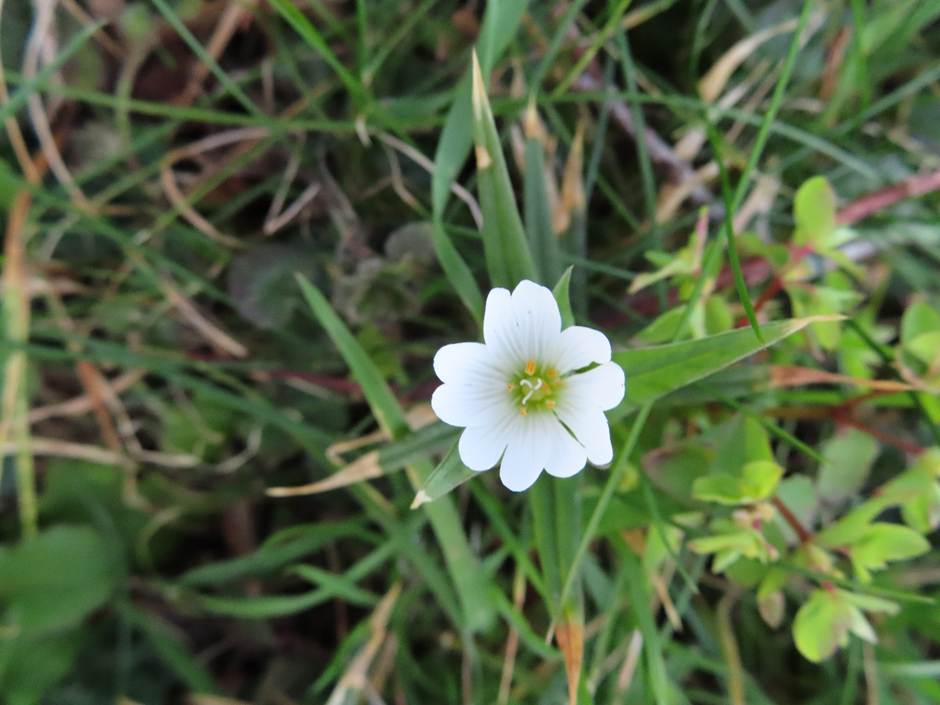 The steep bank at the back of the house is a haven for wildflowers and for this reason I only cut it twice a year. Once after the bluebells have flowered and once in Autumn. The Greater Stitchwort have just started to appear while the Dog Violets are spread across the whole bank in small clumps. It is very easy to garden when nature provides such colour and variety and plants that require no care. 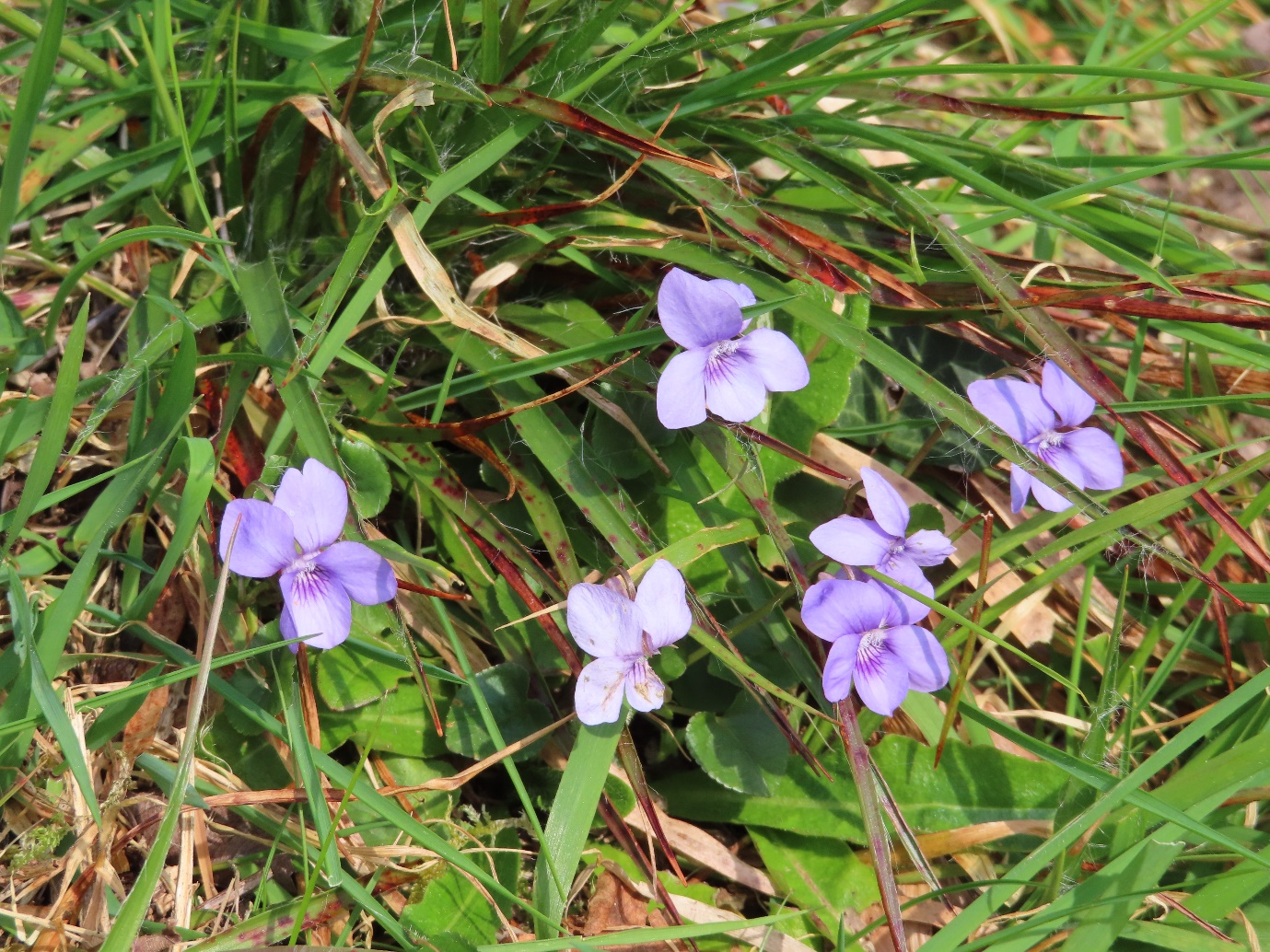 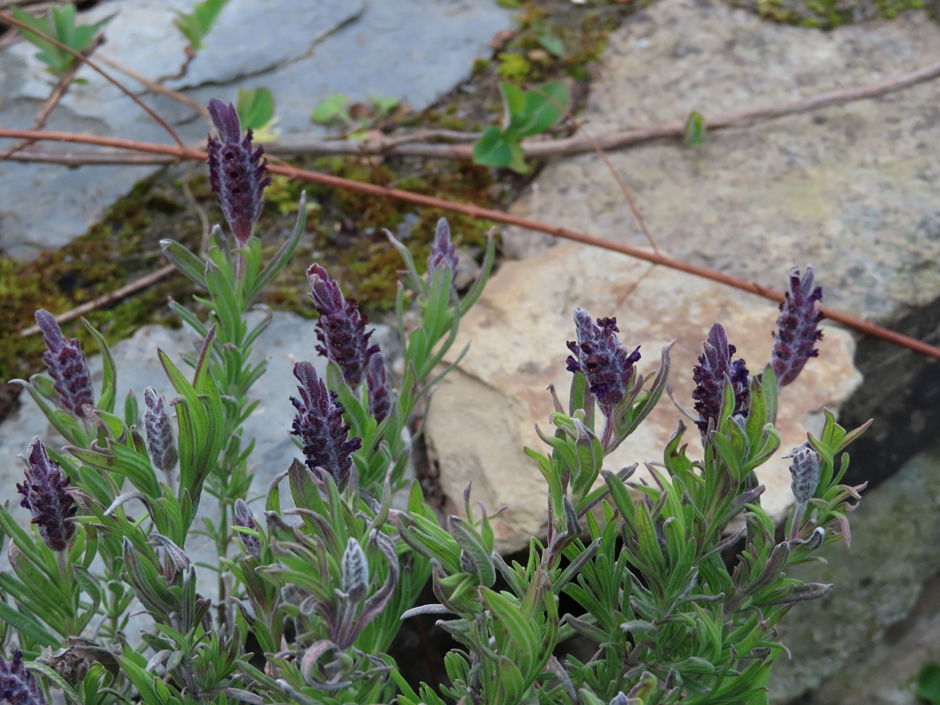 I have become used to the fact that the herb Rosemary flowers all year round in this garden regardless of its position. However, I was surprised a few weeks to see that the Lavenders were also in flower in the raised herb bed by the house. This is not in a particularly sheltered spot but it is not totally exposed either. The sage is looking rather frazzled after the recent frosts but will pick up soon with some pruning. I rarely manage to keep thyme alive throughout the winter despite my best efforts. Golden Oregano is another hardy herb here and bay trees do well with some shelter. 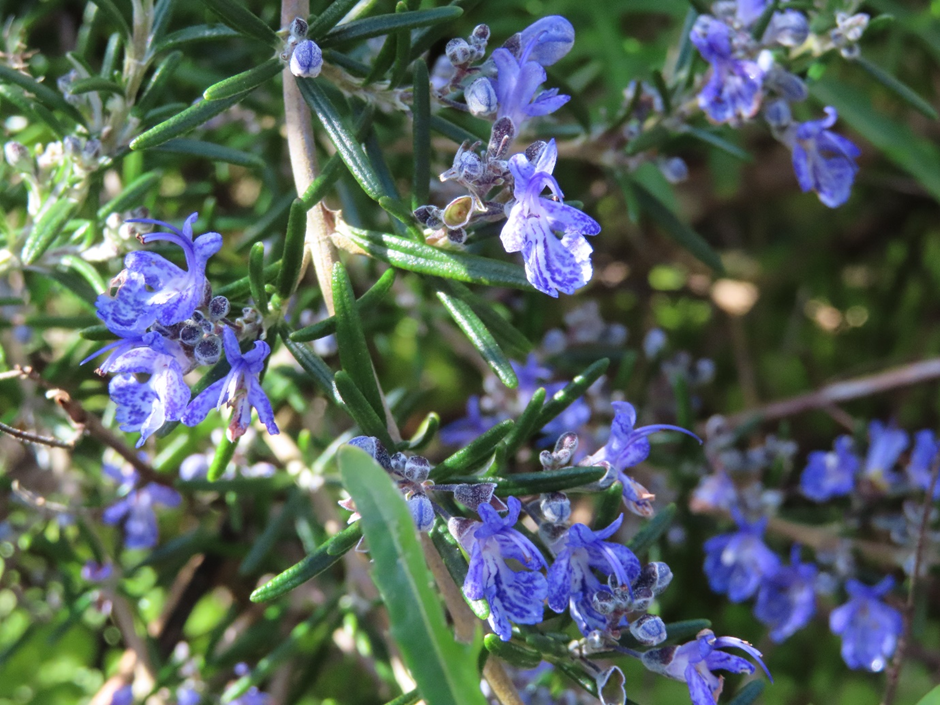 The Rosemary Fota Blue is now completely covered in deep blue flowers which have a more dramatic effect than its more common relative. 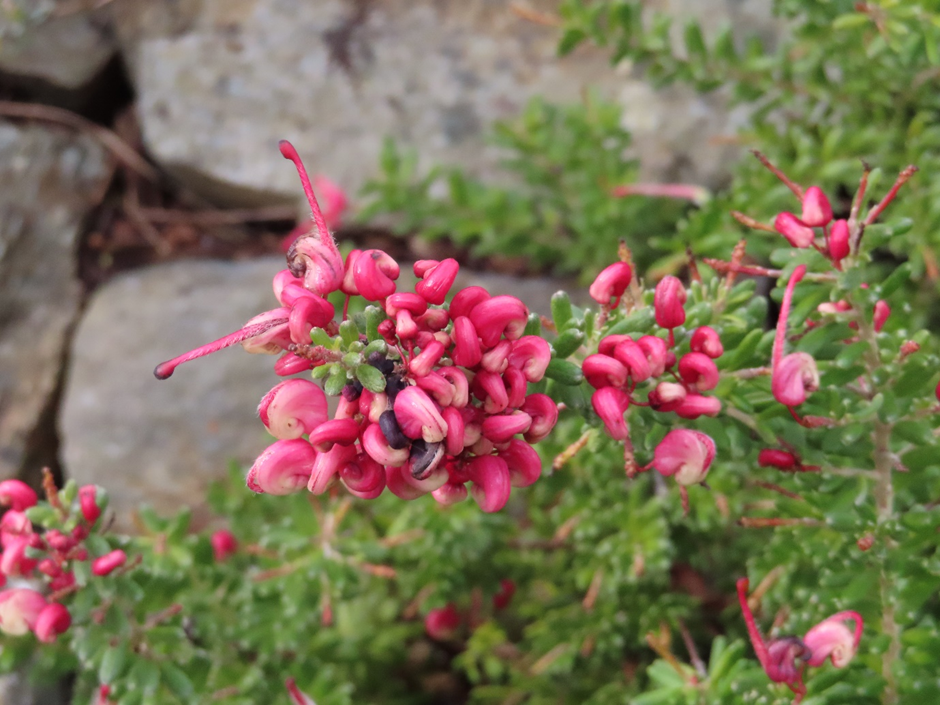 This Grevillea is another plant that produces flowers all year in this garden. It lives in a small rockery along with some Sage and Rosemary. I am thinking of rearranging one bed to grow all of the plants that are currently flowering together for maximum effect in Winter. Of course, the risk is that if I do this, they will all revert to their more usual flowering seasons just to spite me. 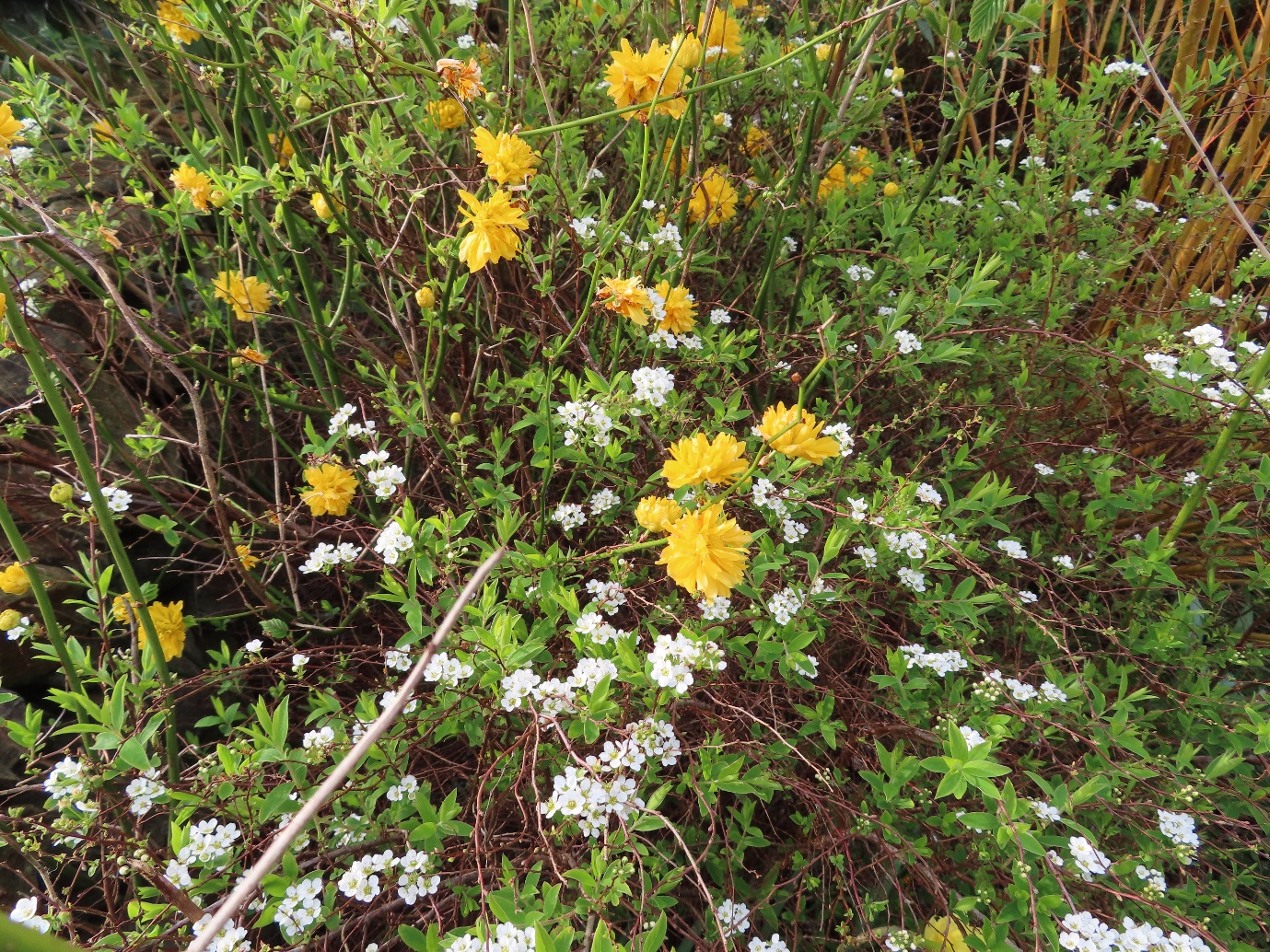 I would usually grow Kerria Japonica against a south facing wall but this would expose it to some of the worst storms of the winter. Instead, it is growing against a low west facing wall but is half hidden by a number of other plants including a Buddleia and a small Willow. Despite the reduced sunlight it seems very healthy and produces plenty of blossoms although the plant itself never grows higher than the wall. 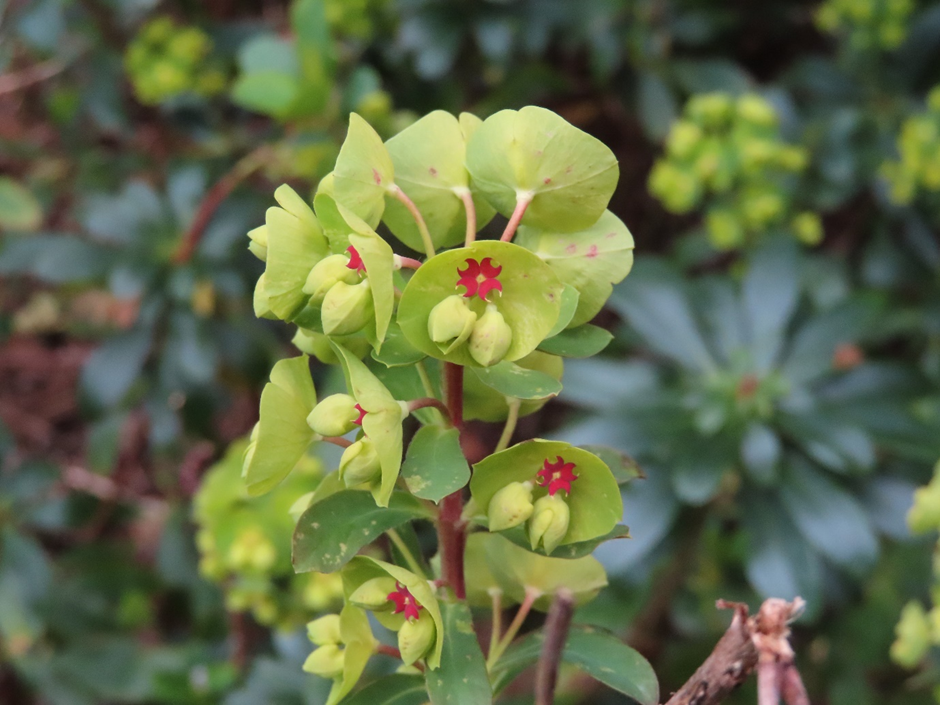 This Euphorbia martini was planted last year. Unlike the common euphorbia, which is running riot in the willow border, this is almost all that is left of this plant. It is particularly striking so I will try to see if I can add a few more plants this year but it may be too delicate for this area.. 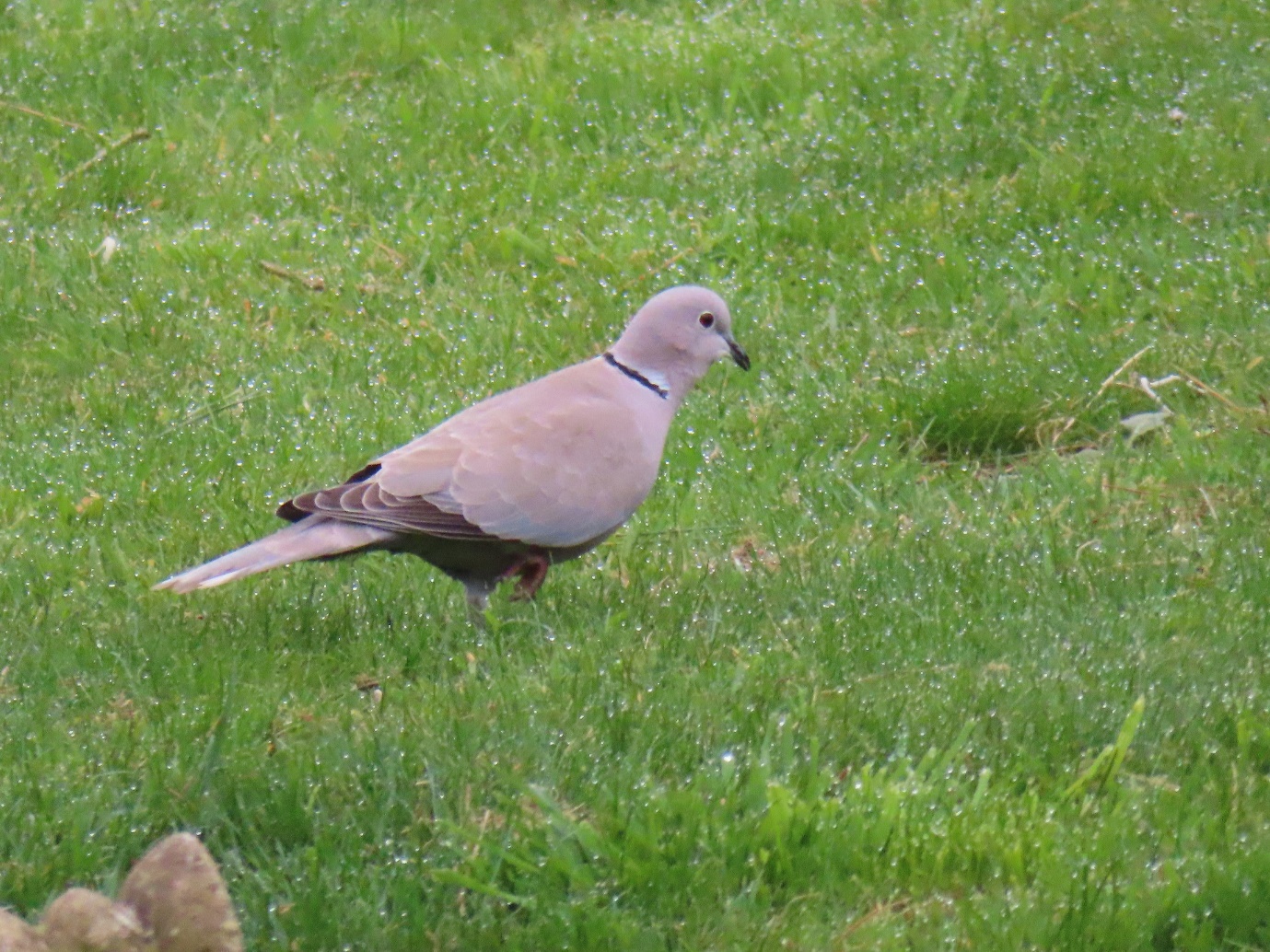 There has been a noticeable change in the bird population in the last week. The crows have disappeared and I now have a beautiful collar dove taking their place. The consumption of bird food has decreased dramatically so I am assuming that it is the crows that have been driving me close to bankruptcy. Song thrushes and blackbirds are also visiting more often and I now have at least three greenfinches. 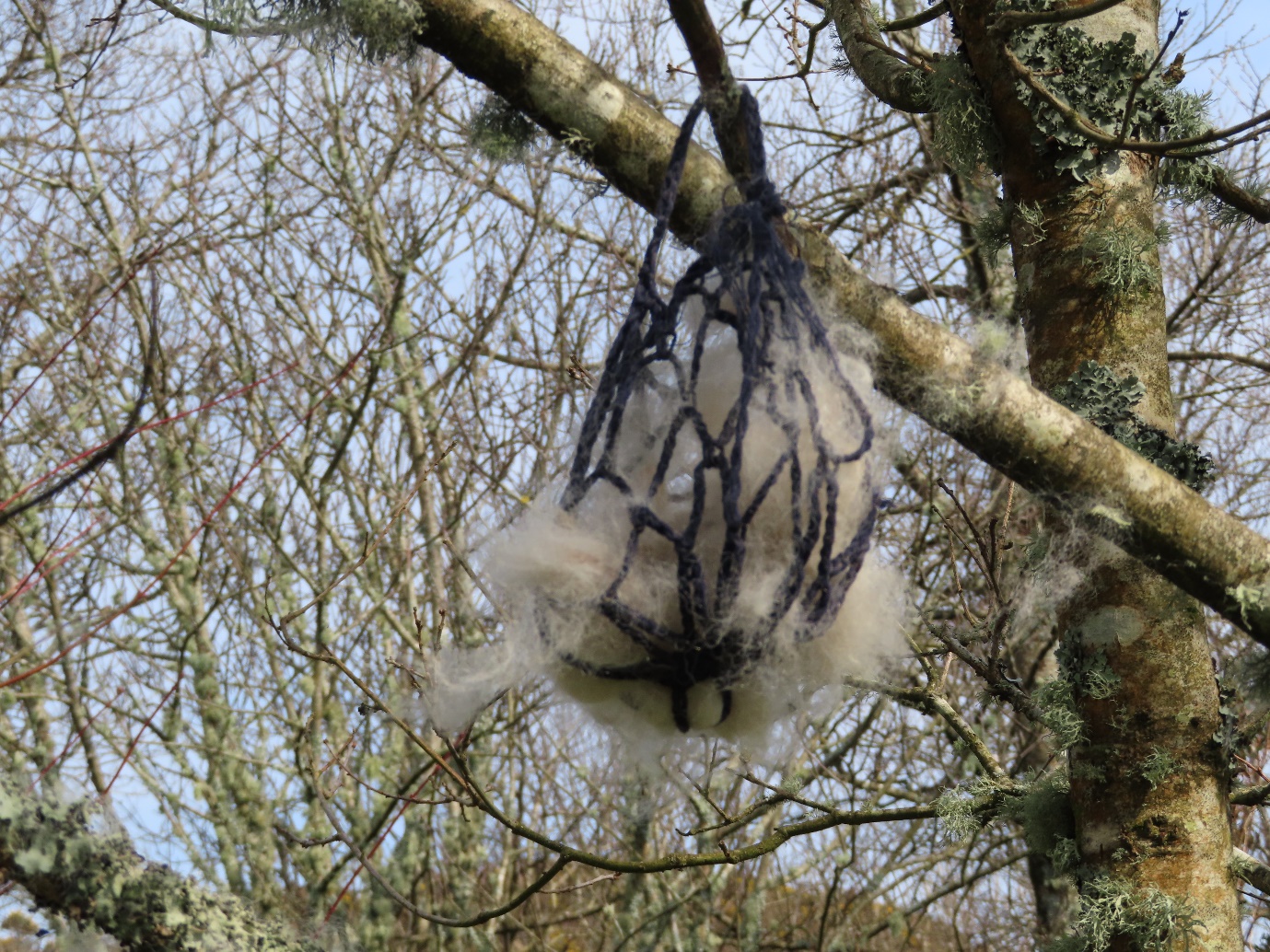 Nest building has started and the bundle of Alpaca wool that I hung in the trees has been reduced by half. There is also a plentiful supply of moss and lichen in the copse so I think the birds will be warm and cosy regardless of the weather. The wrens are creating quite a racket at the side of the house and I suspect that this is where they are building their nest. 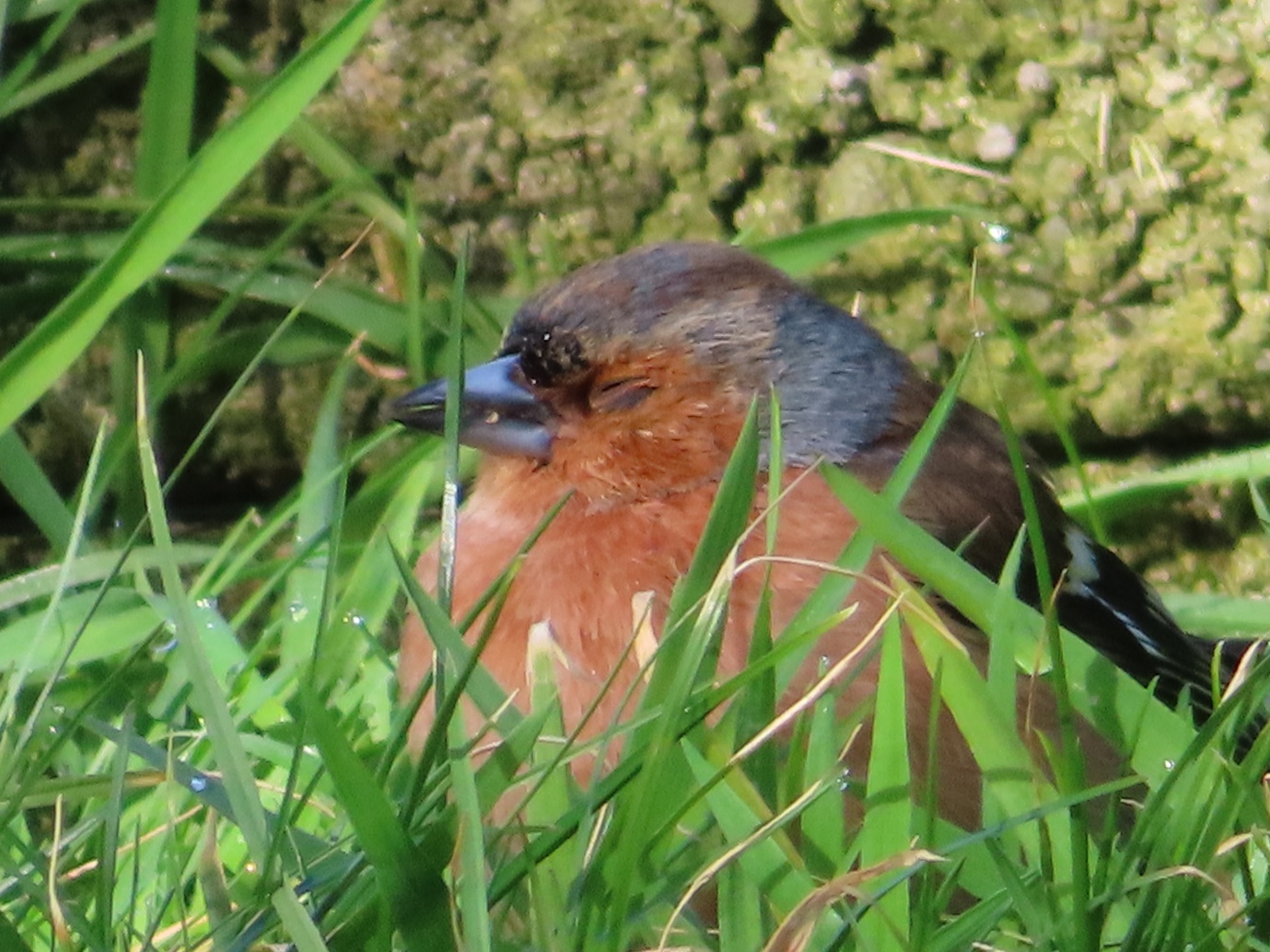 I still have a large flock of goldfinches and chaffinches and I was rather worried when I saw this male seemingly inert in the grass. However, I assume that he was just stunned as he soon perked up and flew off looking suitably bright eyed. I rarely have the opportunity to get a good photograph of these birds as they are always on the move so this was a bit of luck. 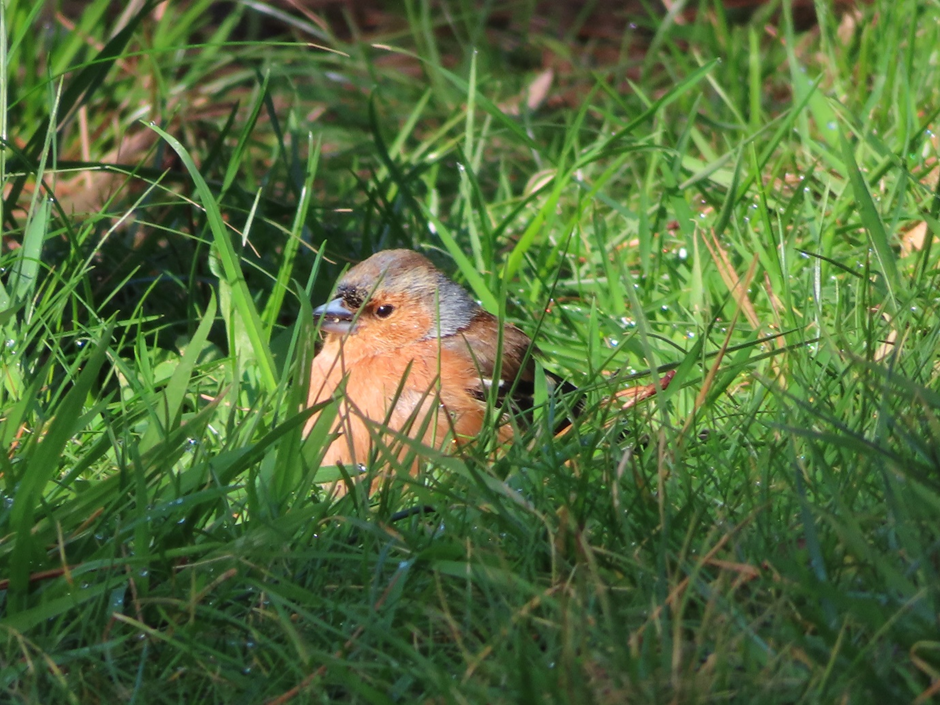 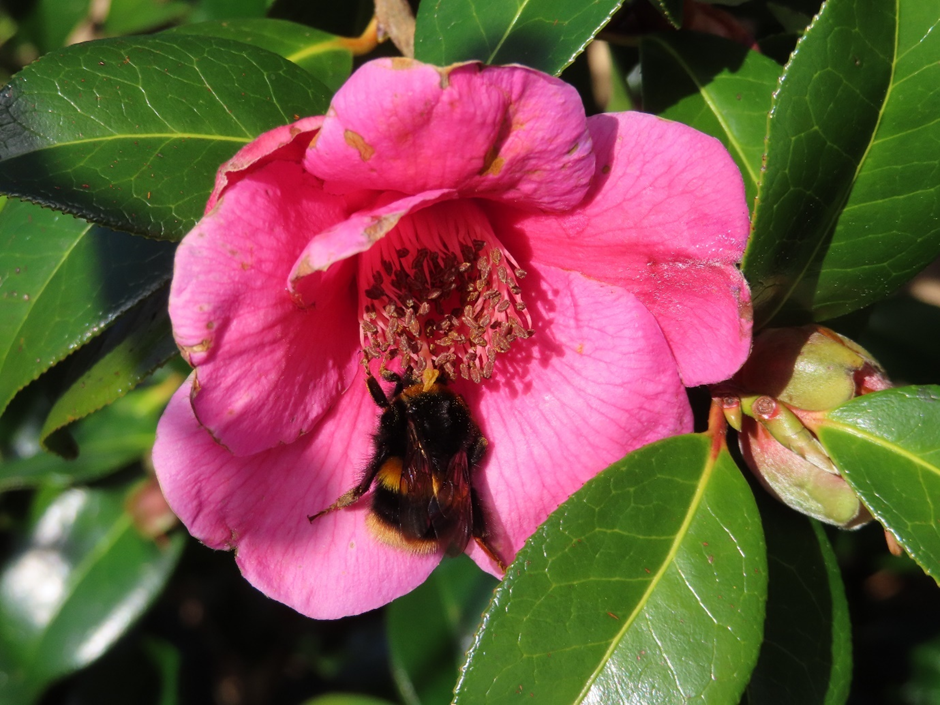 This picture of my beautiful 14-year-old Camellia reticulata Inspiration was taken after the recent trio of devastating storms. It is the 13 -year-old camellia which travelled with me throughout West Cork before finding a permanent home here. It has survived everything that the weather could throw at it in those 13 years and has flourished providing me with a mass of colour from December to May. On the day that this photograph was taken the shrub was completely covered in flowers each with its own bee or insect a sign that it is one of the few camellias in the garden that has food for all. Sadly, it was also lying on the ground flattened by a freak gust of wind from the north on what was a stormy night but mild in comparison to some of the gales here. The roots were intact and the stem snapped close to the ground. I still cannot work out what happened as it is growing in a sheltered spot with the exception of the North wind which is rare here. It has felled a mature Bay tree growing beside it. As it is my favourite camellia and I have never been able to source another I was too upset to do anything except leave it alone. Two weeks later it is obviously dying in parts but is still covered in insects and bees feeding from its newly flowering buds. Not only that but there is a foot high camellia sapling growing very close to the broken trunk which I had not noticed before. This I one of the camellias that produced seeds last year but I don’t think any were viable. Regardless I am treating this sapling like a precious jewel in the hope that it will grow into a mature plant. I always feel that the fact that anything survives here is a small miracle. This just reminds me that nature continues to surprise and delight even when things look bleak. 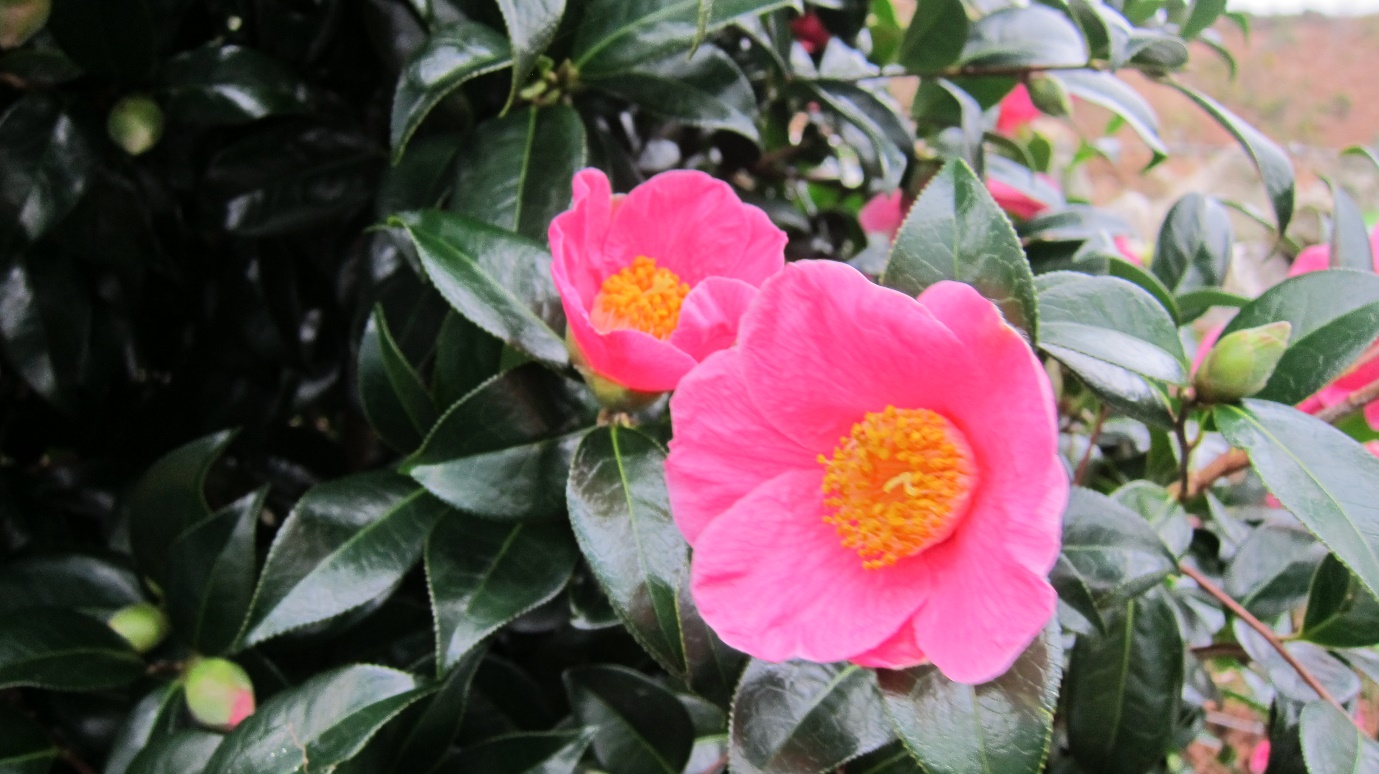