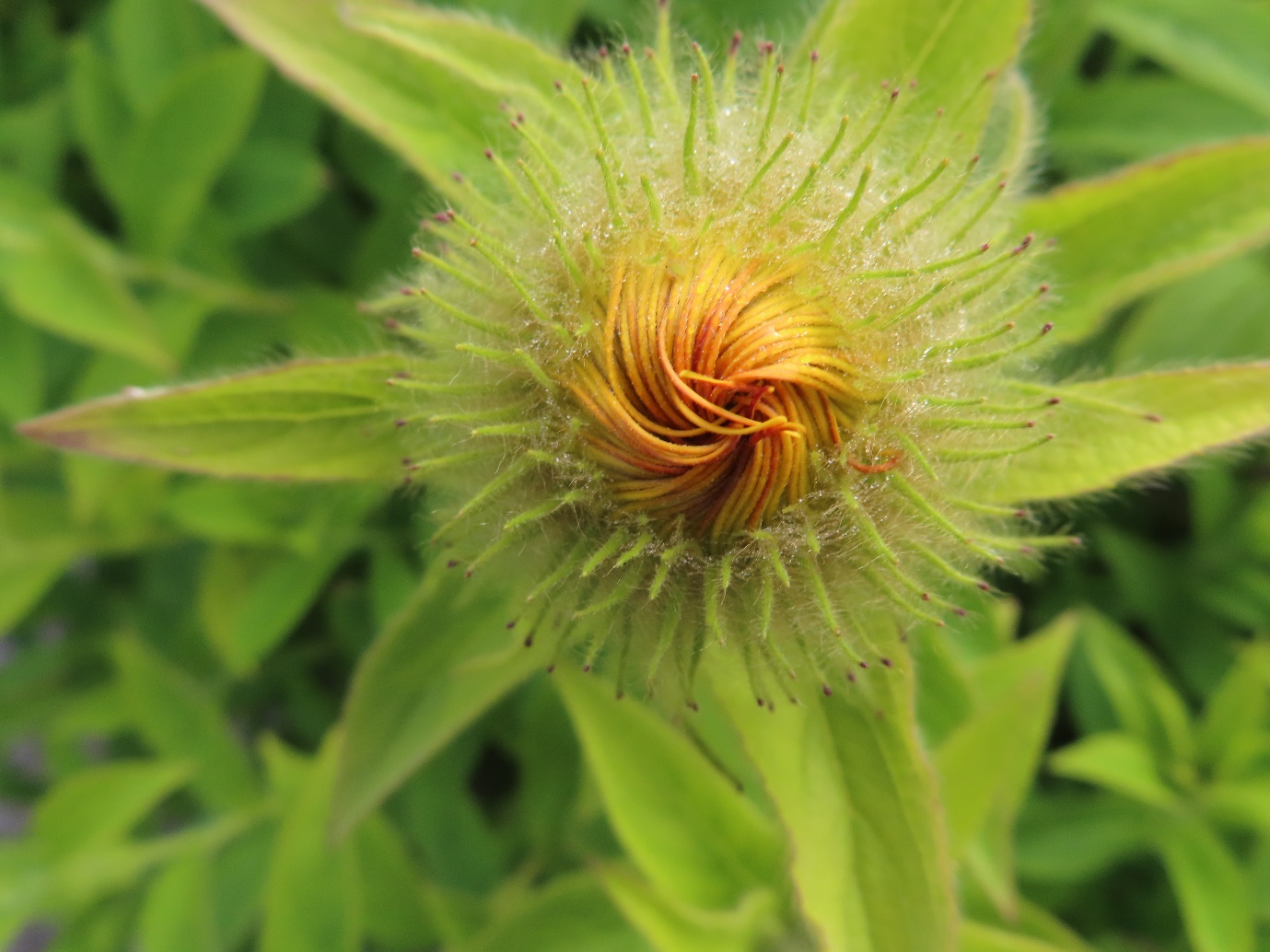 I have a love-hate relationship with the Inula Hookeri which dominates whatever part of the garden it inhabits. Its flower is interesting from the moment it appears, but it spreads rapidly and will quickly push out anything growing near it. Each winter I have the arduous task of containing it, muttering under my breath as I do so, but I can’t remove it completely as its saving grace is the fact that it is a magnet for butterflies, shield bugs and ladybirds. Even bees make an occasional visit. Only Buddleia compare as butterfly magnets. 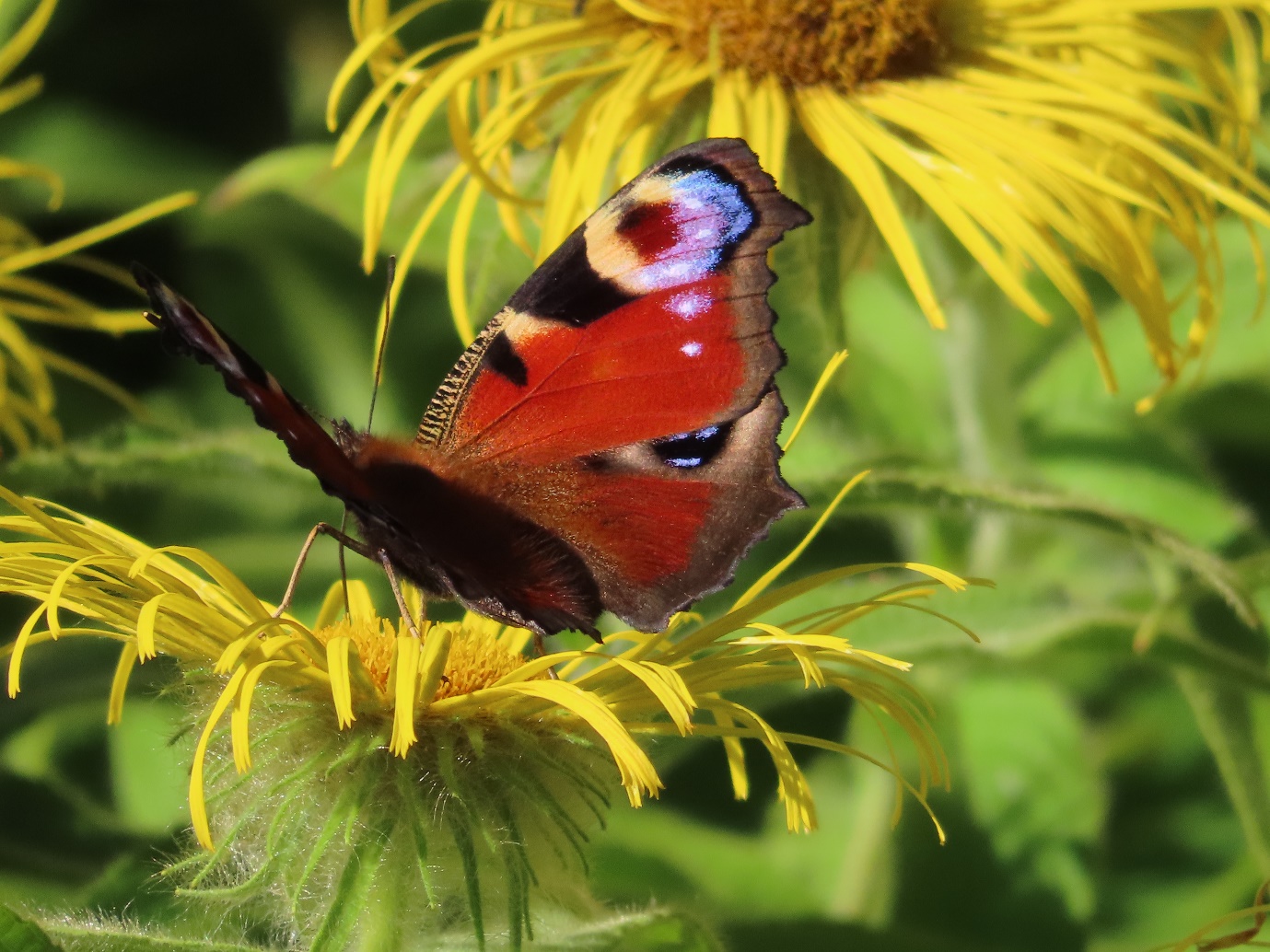 A peacock butterfly feeding on the mature Inula Hookeri.

I can identify at least ten different butterflies that visit the garden and could probably find more if they would stay still enough for me to see them properly. The Peacock, Red Admiral, Painted Lady and Small Tortoiseshell all arrived in the first week of August. I was becoming concerned as the hot weather ensured that the Buddleia and Inula were well past their best with few fresh flowers. I was afraid that there would not be enough food in the garden for them and I will need to find new sources of food that will flower in August if this weather becomes the norm. 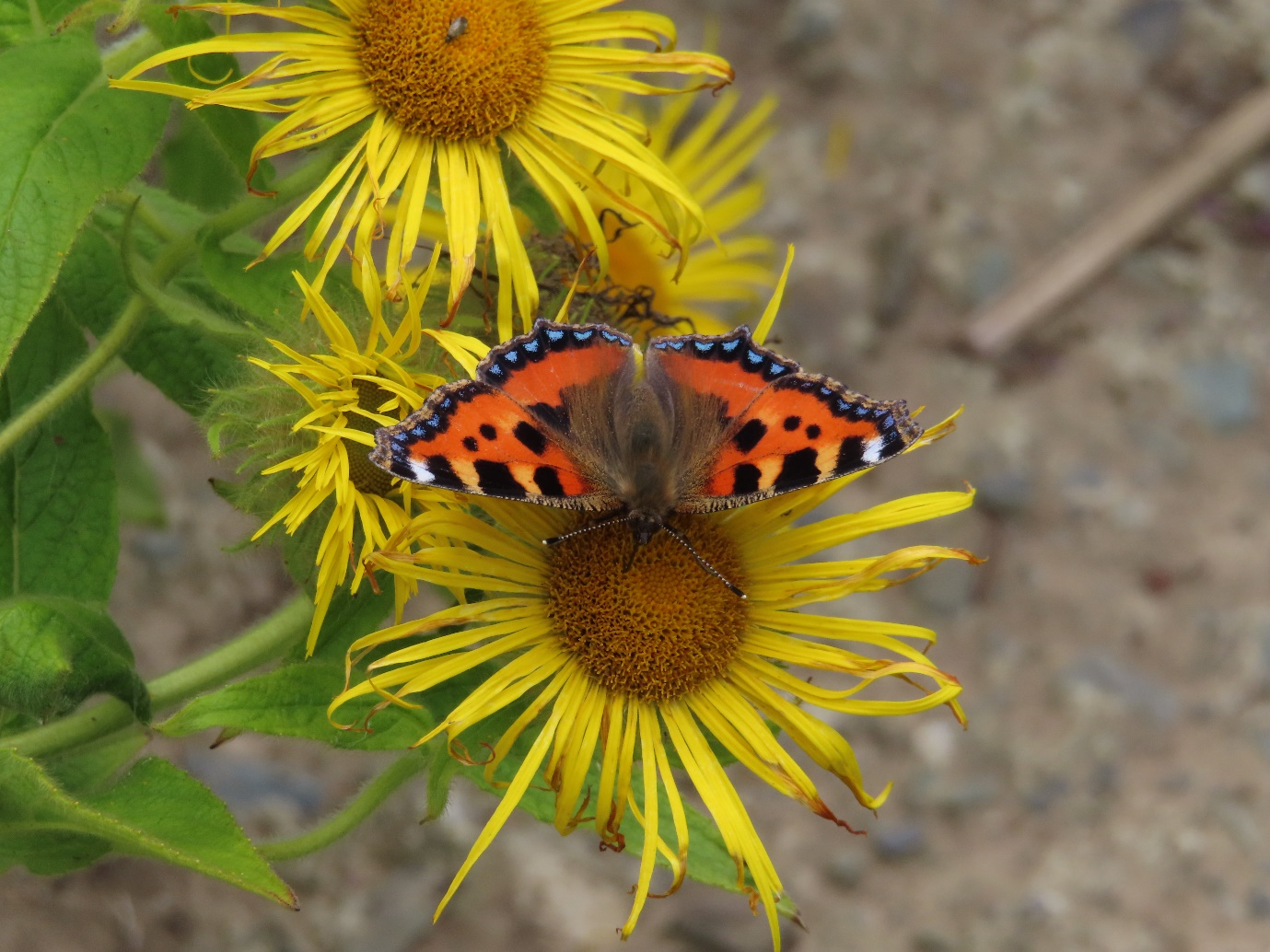 A small Tortoiseshell feeding from a fading Inula flower. The hot weather seems to have attracted far more butterflies to the garden this year and unlike last year they look very healthy. 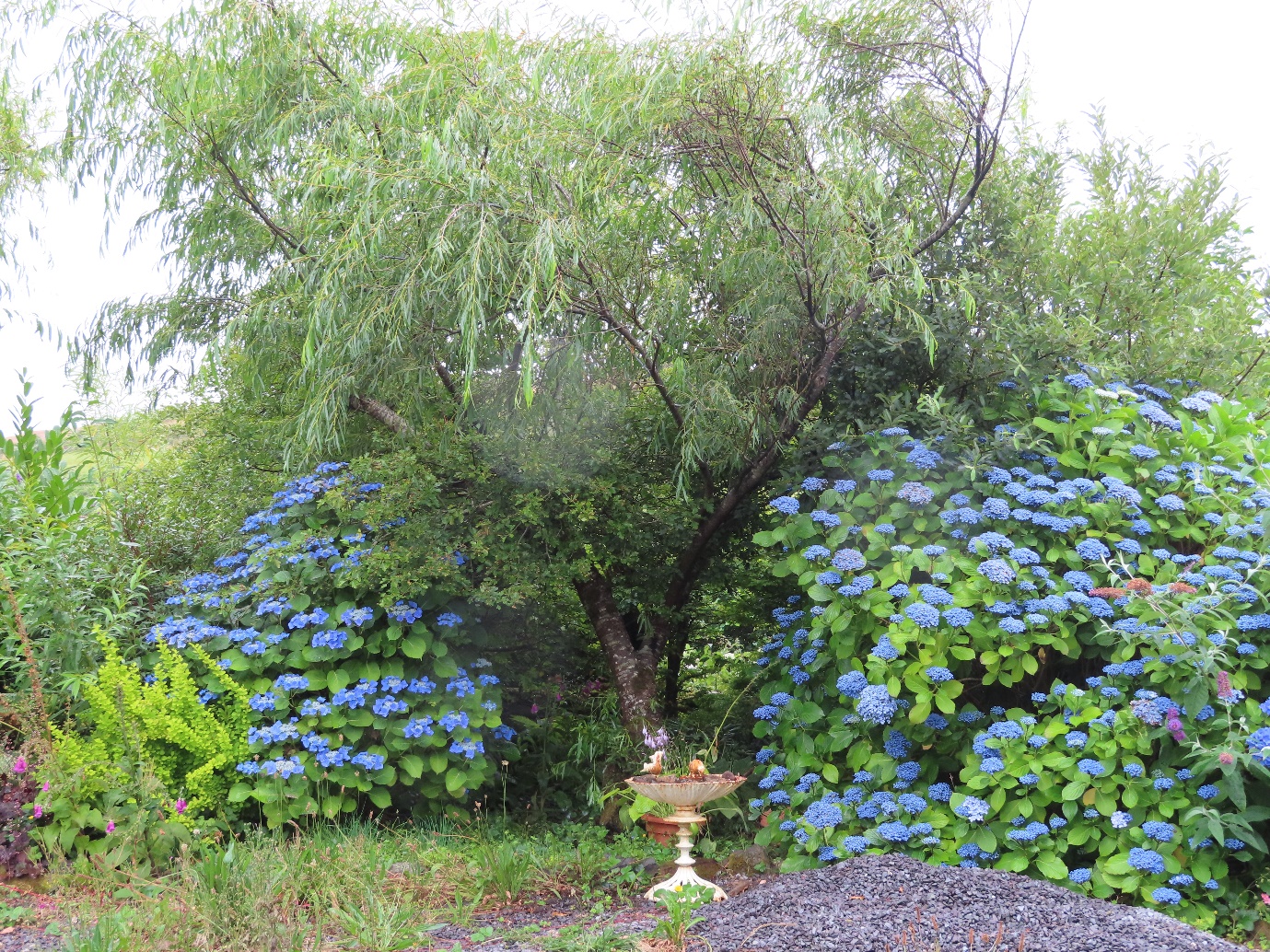 My little willow garden is still out of bounds and if possible, there are more swarming wasps than ever. I have to wait until the evening to fill the bird bath as some of the wasps are the biggest that I have ever seen and I have no intention of upsetting them. 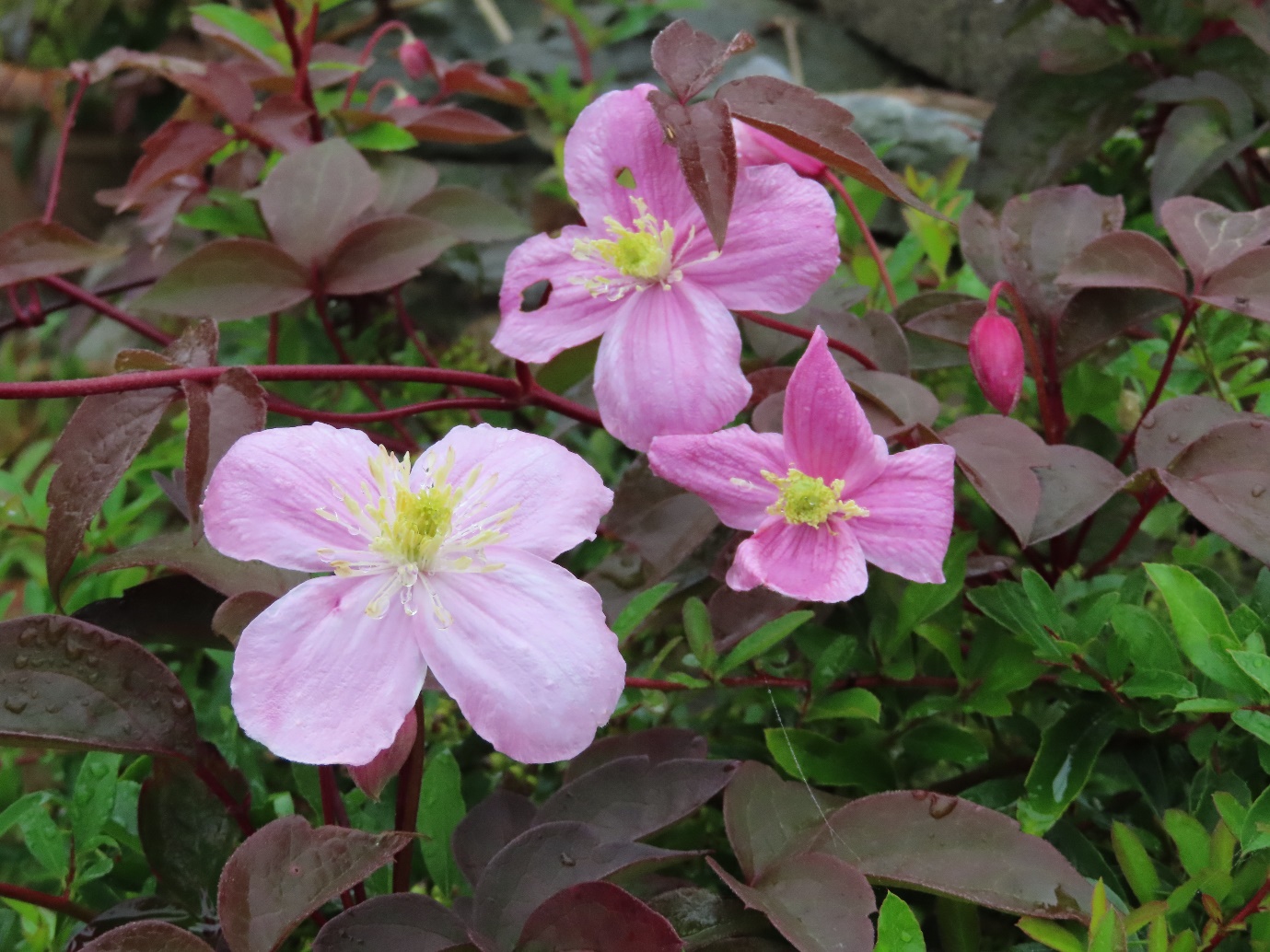 My spring flowering Clematis Montana has finally recovered from the mauling that it got in Spring from the mice and voles living in the stone walls. It is now in flower. Admittedly most of the flowers are on the part of the plant that is growing through the pyracantha whose thorns act as a deterrent to the thieves. In another area I will have to do a severe pruning as the clematis has completely eschewed the wall it was supposed to cover and is now hiding three hydrangeas. Given that the four clematis were stripped bare in the Spring their resilience is as impressive as the rodent appetite. 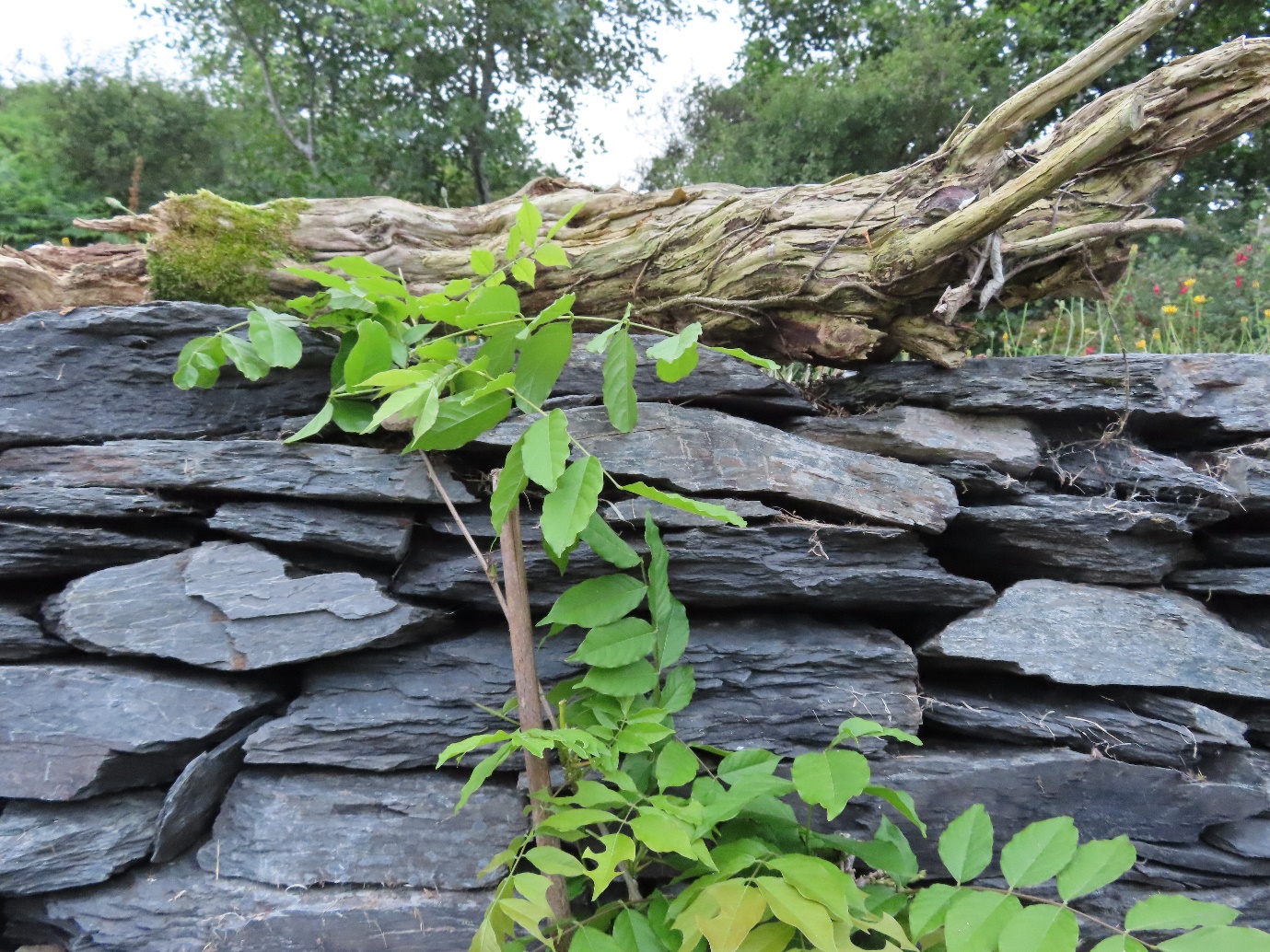 In the absence of any suitable walls for climbing plants I added a laburnum to the four clematis that I cleverly trained along the top of my dry-stone walls. As with the clematis the mice and voles found it an attractive source of food. For five years the poor plant has never managed to produce more than a few tiny buds before they are devoured. To make things worse the it was finally hidden in the last few years by the less tasty shrubs growing close to it. A few weeks ago, on one of the hottest days of the year my guilt finally became unbearable and I went hunting for it. As usual it was sporting a few tiny buds. I have now planted it in full sun on the wall built to hide my oil tank. This is the growth in just two weeks. I am still trying to find a way to secure it but it must be the most forgiving plant in the garden. 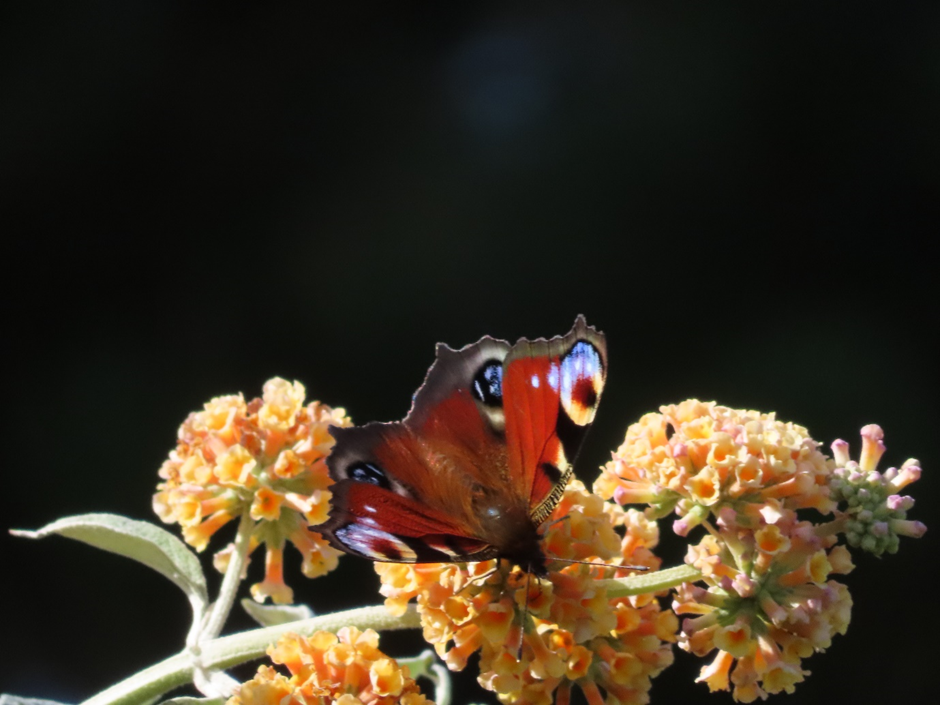 I managed to deadhead many of the Buddleia and some produced a second set of blossoms. This Buddleja Weyeriana is a particular favourite of the butterflies. 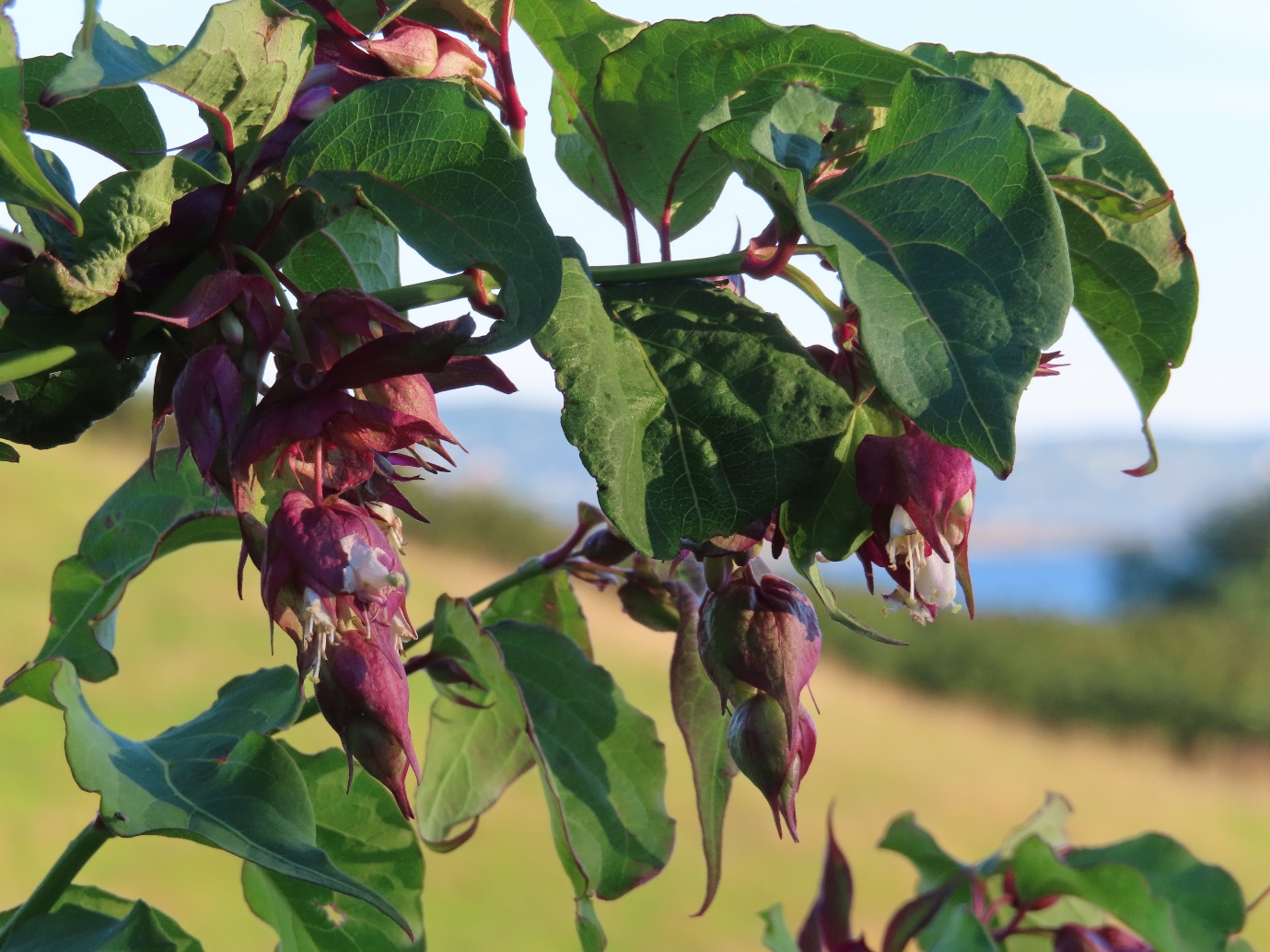 The Lycesteria Formosa seems to be dealing with the heat unlike some of the other plants in the garden. 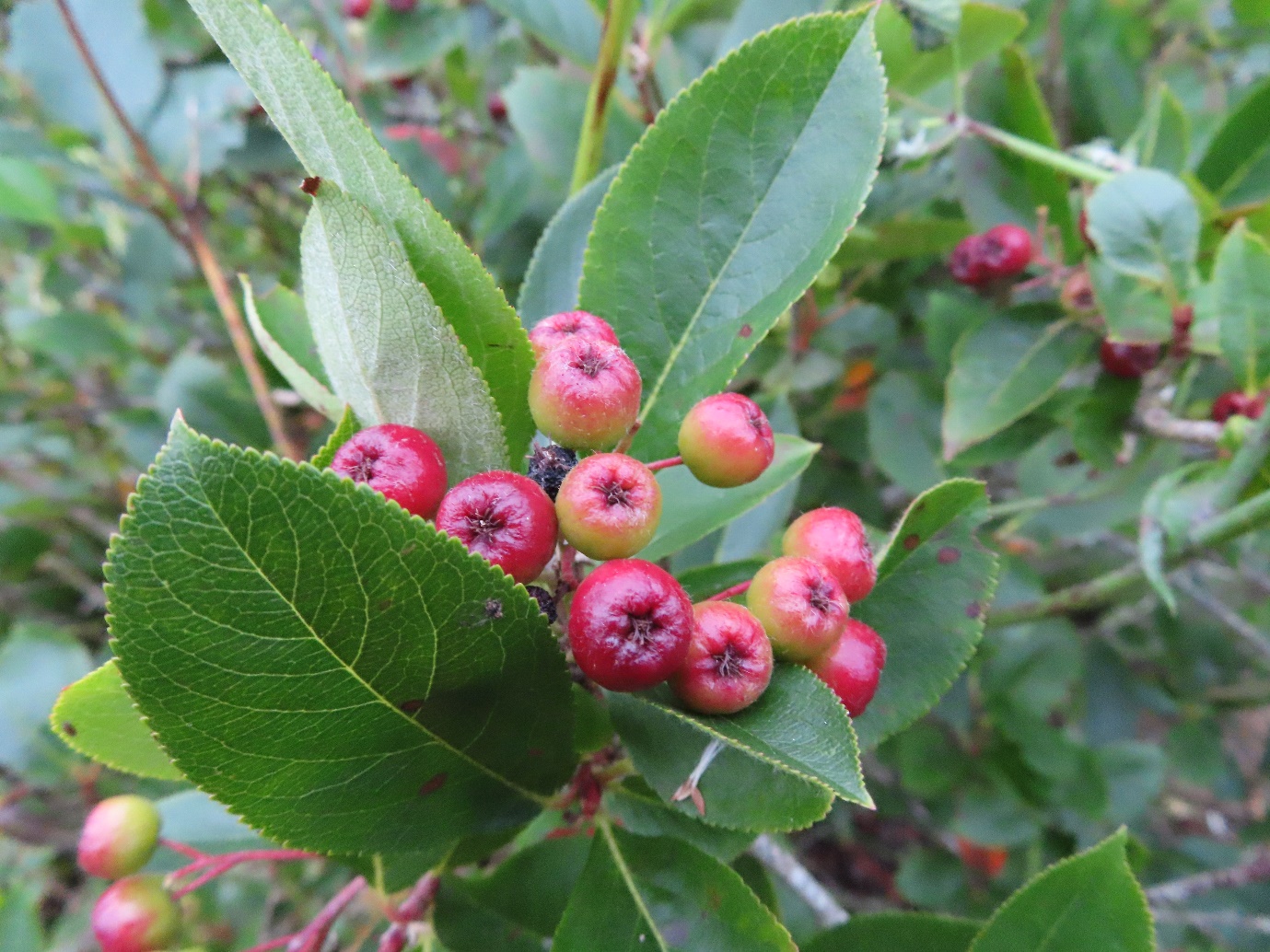 I have not even attempted to take a photograph of a ripe Aronia berry as the birds always get to them before I do. Apparently, they are rich in antioxidants but the few I have sampled are rather dry and would not be my favourite berry. If I do ever get to harvest any, I will need to find some other fruit to add to them to make them more palatable. In the meantime the birds are welcome to them. 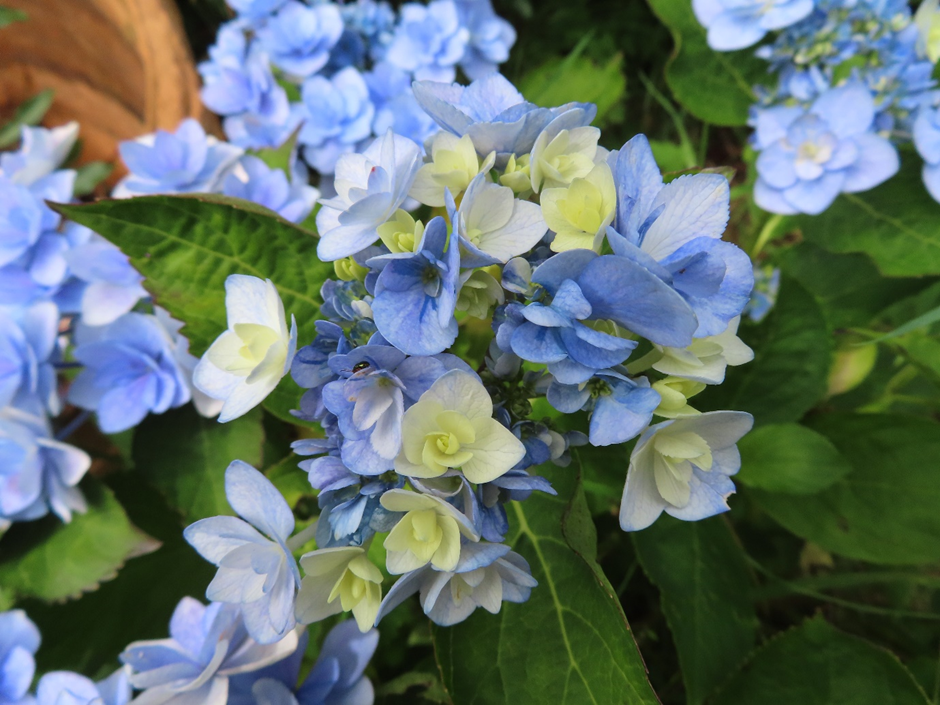 Many of the hydrangea have suffered badly in the last few weeks but this double flowering variety has done better than most. It has been planted in the shade which may have helped. I have no memory of buying it but it has to be one of the most beautiful in the garden and is also very easy to grow from cuttings. If it continues to do well it will turn a lovely silver grey/pink in a month or two. I think that it is Youmenine ‘Together’ but am open to correction. I know that hydrangea are water loving plants, but it puzzles me that some planted in the shade are wilting alarmingly while others in full sun are doing well. 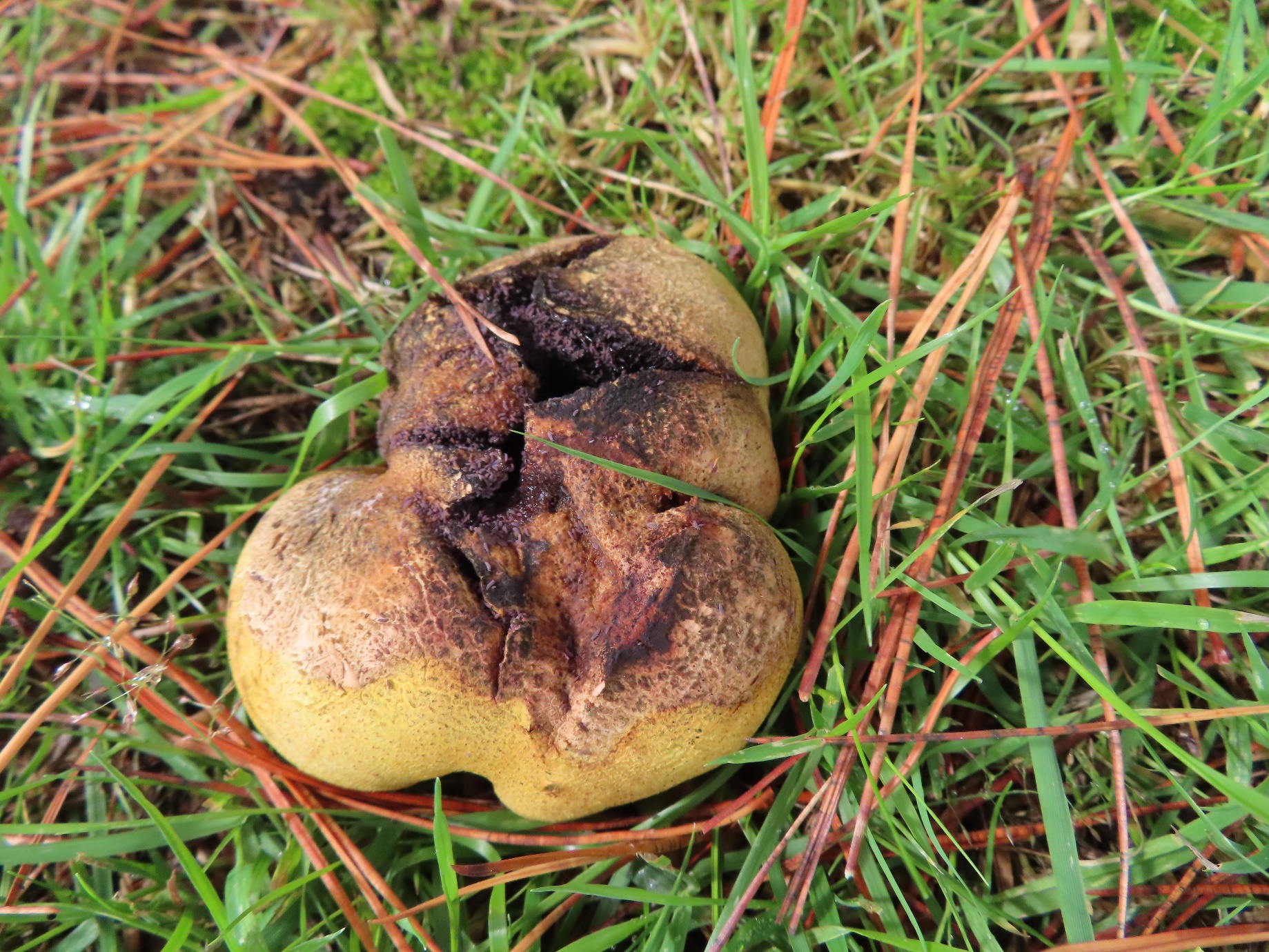 I almost missed the arrival of the Earthballs that grow under my pine trees by the dozen. Unlike Puffballs they do not expel their spores through a central pore but rather crack open and rely on the wind to dispel them. You could hardly describe them as attractive but like all fungi have a symbiotic and beneficial relationship with the roots of the surrounding plants. 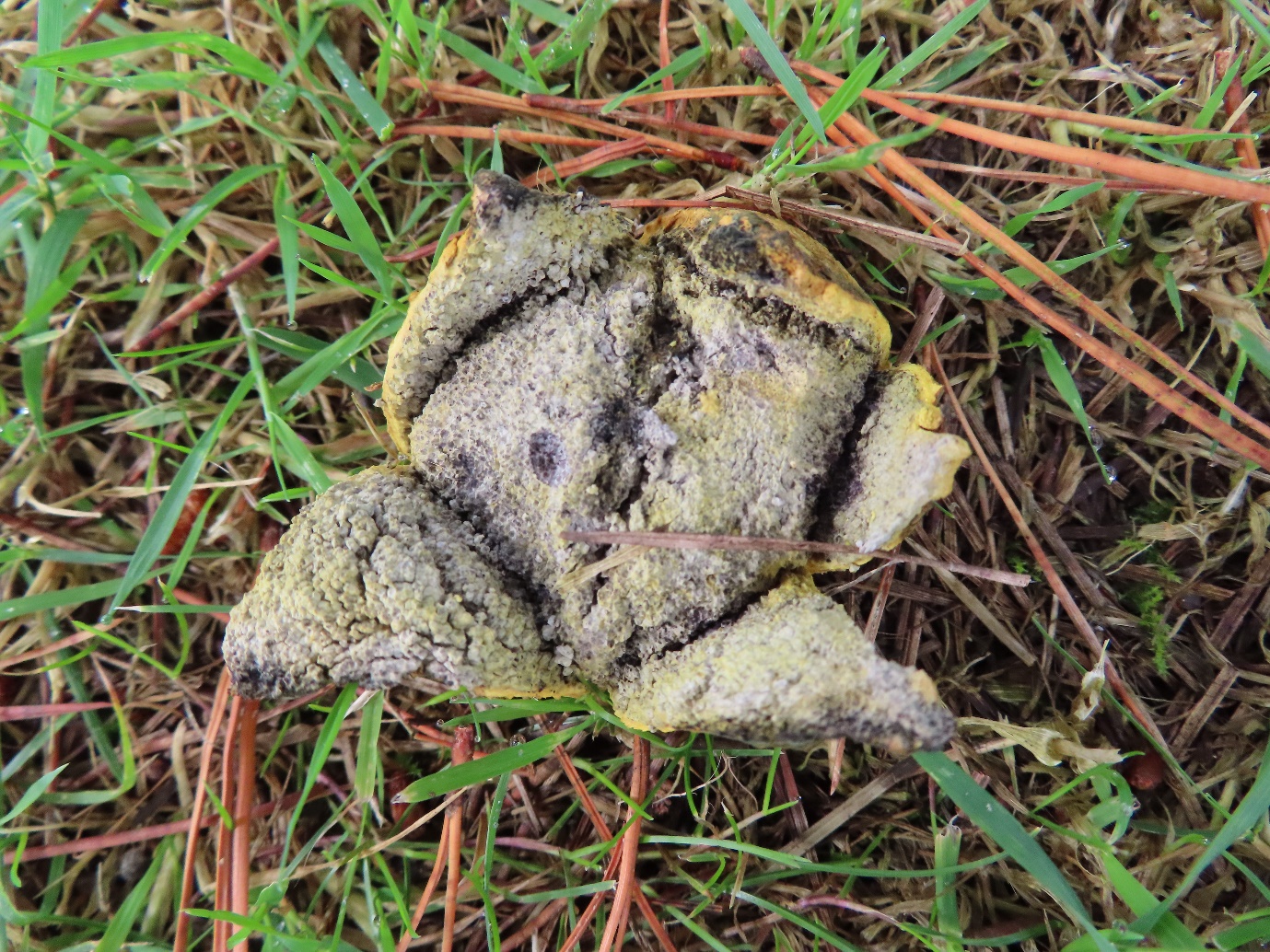 The gleba or spore forming tissue of the earthball turns from a white to a purple or purple brown. I have no idea whether this is poisonous or safe to eat but must admit that neither earthballs nor puffballs look as if they would make a tasty dish. 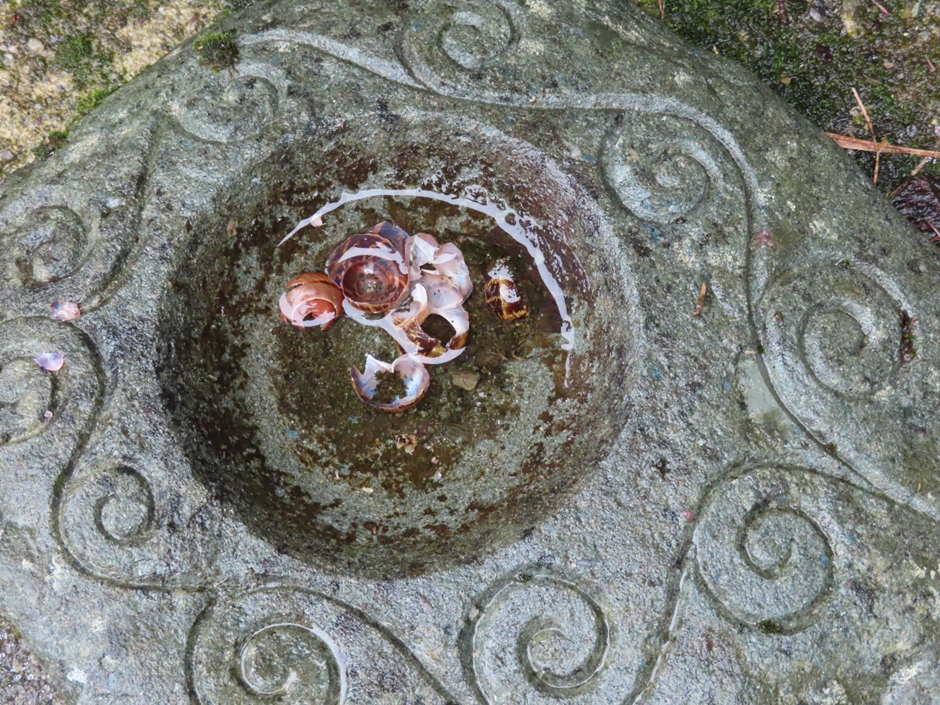 I have decided to forgive the blackbirds and thrushes their transgressions in the fruit and vegetable gardens as I am finding snail shells everywhere I look. The birds have also discovered the snails in the Hosta behind the house and have chosen this water bowl on which to break them. Despite their good work I am concerned for their safety. While Millie loves fruit and vegetables, she is not a vegetarian and I now have to make loud noises to scare the birds every time I leave the house.