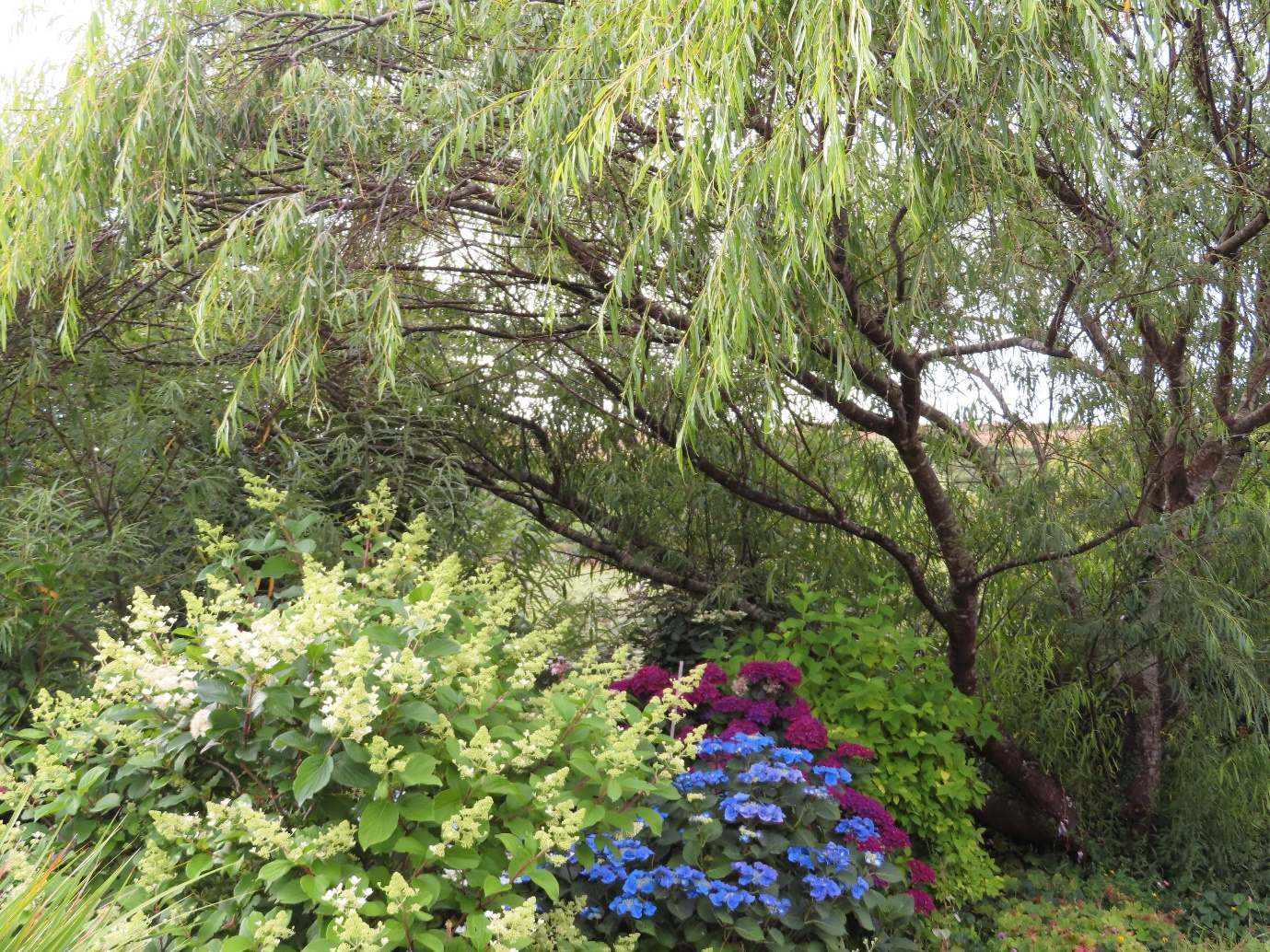 At this time of the year the air around these two willow trees is humming with the sound of thousands of swarming wasps. They are attracted to a translucent sticky substance called honeydew which also drops onto the leaves of the hydrangea and hawthorn trees. This honeydew is created by large willow bark aphids which feed on the leaves of the willow and leave a sweet sugary trail. The wasps are joined by bumblebees, flies and a yellow and black fly that I don’t recognise. In previous years I have been able to work under the trees without one wasp paying me any attention. However, there is an ominous tone to the hum this year and I think that there are both Common and German wasps feeding on the trees unlike previous years. I have already had ‘run ins’ with Common wasps in the past so I am reluctant to hang around to make a positive identification. In fact, the area is out of bounds until the honeydew is gone. 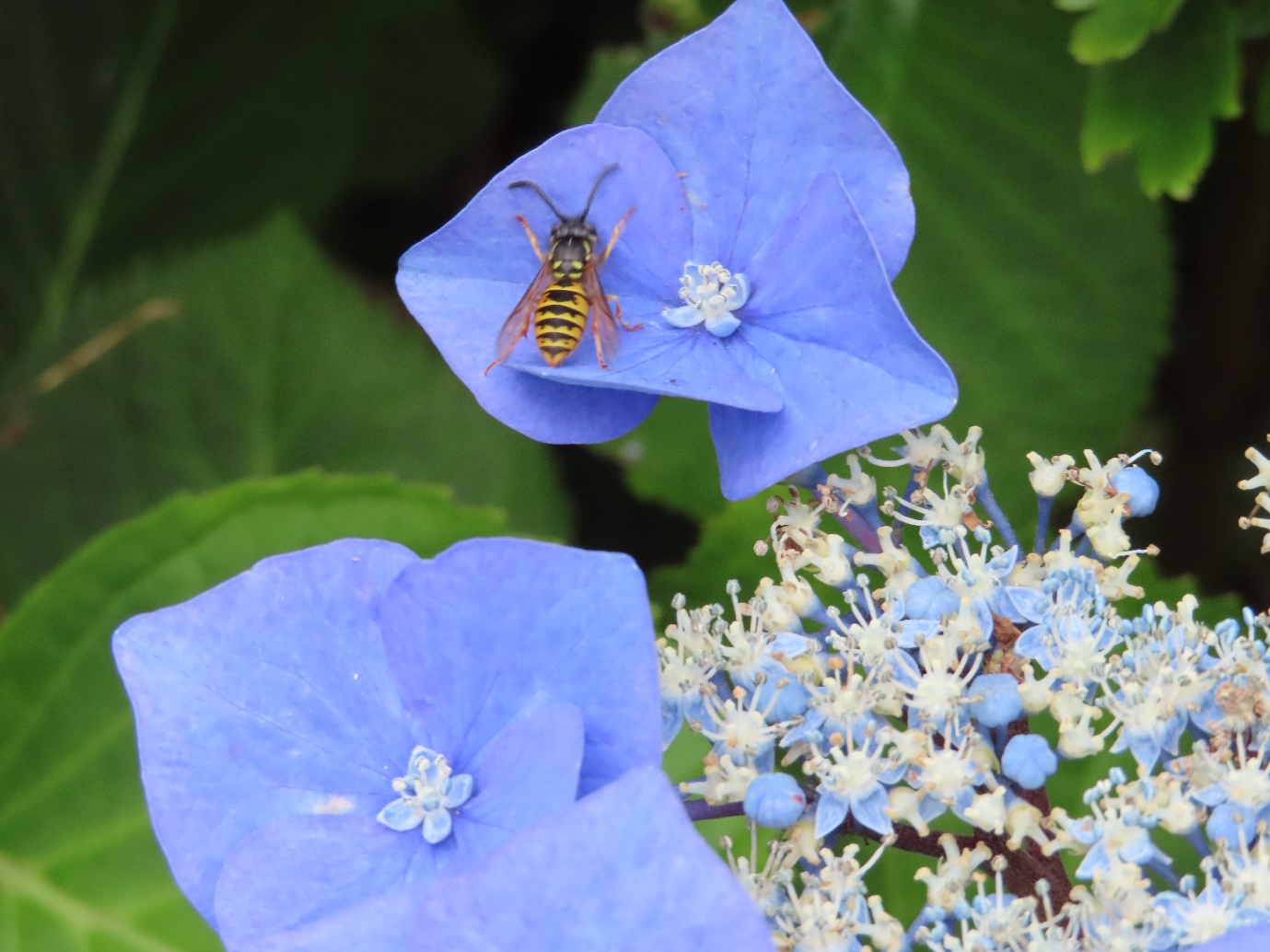 Even the hydrangea flowers have some honeydew to offer. While watching them the other evening I noticed that the trees were full of birds and spied at least a dozen sparrows, two bullfinches, a green finch, some chaffinches, a coal tit and a long-tailed tit. I am not sure if they are after the honeydew or the wasps but I have never seen such a collection of birds in one place. And to think that I once thought that the trees were diseased and needing replacing. As usual, less is more and it is at times like these that I feel very proud of the wildlife that is now attracted to my garden. 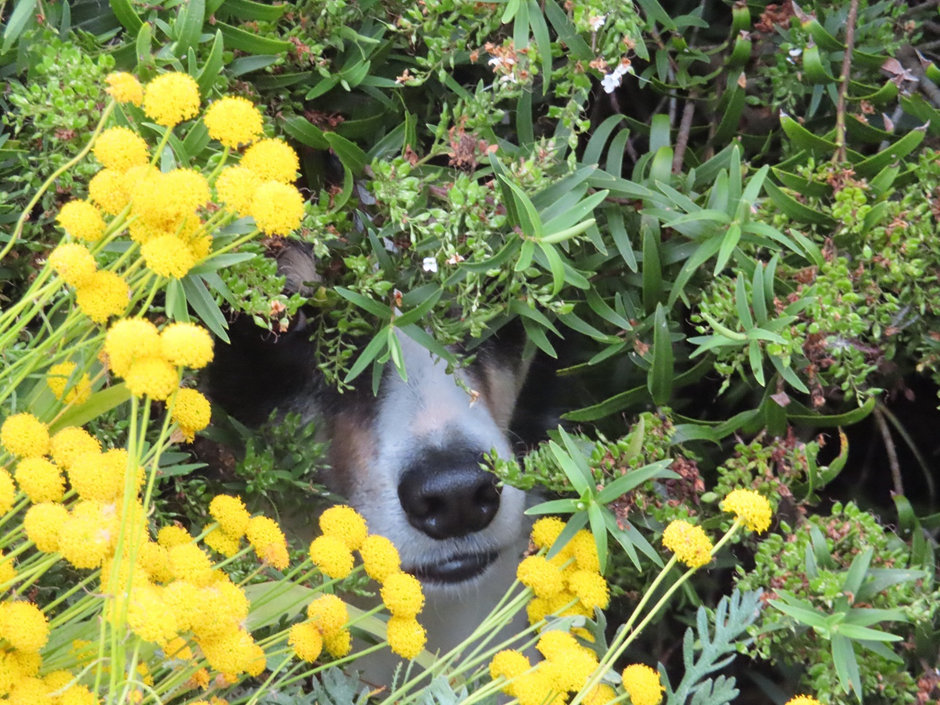 During the hot weather I retreated to the carport to ‘garden’ out of the direct sun. Throughout the garden you can find carefully dug out indentations under selected shrubs where my dogs have chosen to stay cool. This is Badger my rescue male collie. Having had to fend for himself in the wild for some time he is a master at picking cool hiding places. He has even chosen colours that complement his black and white coat. 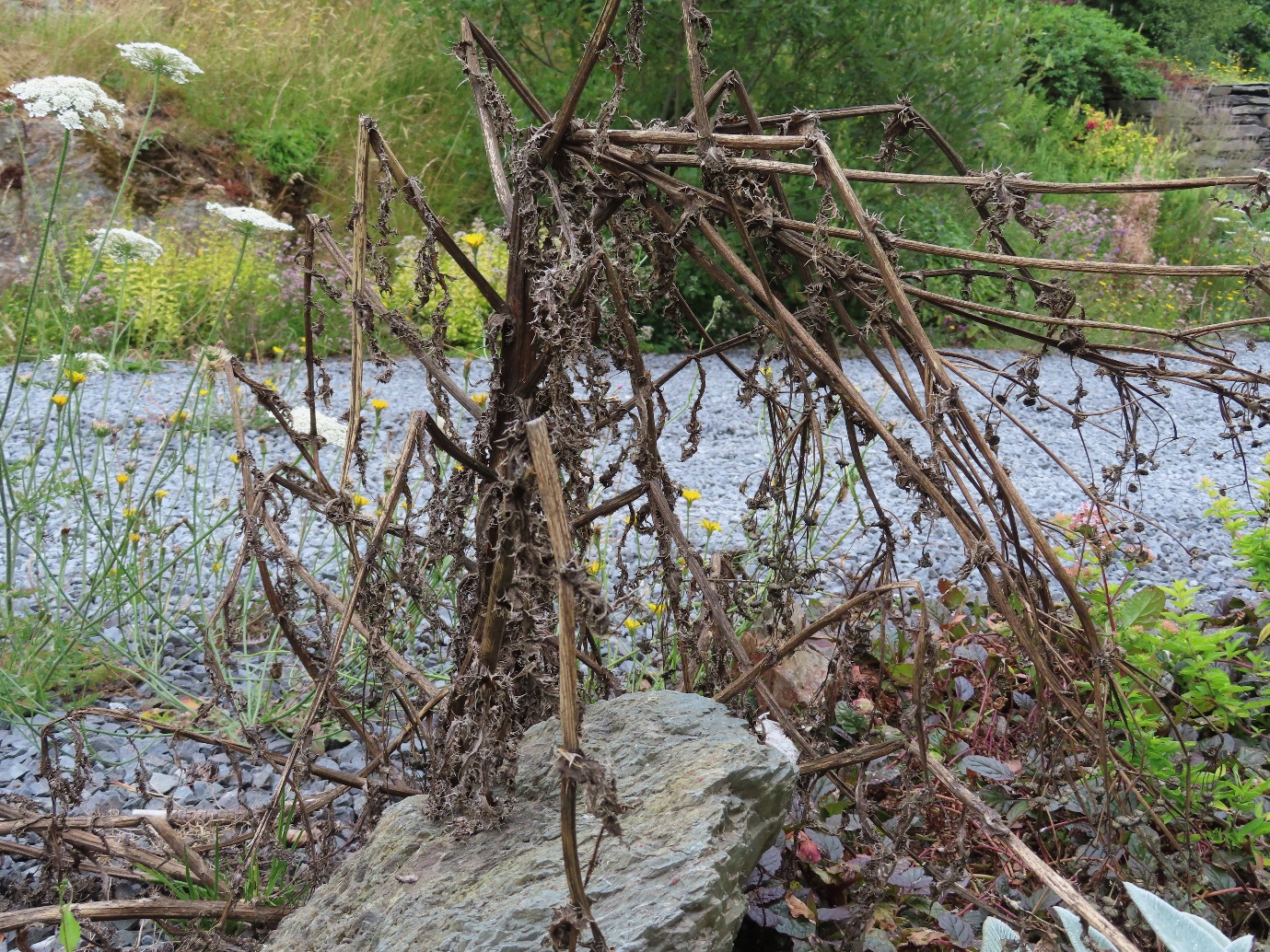 From the sublime to the ridiculous. Occasionally people ask if they can see my garden. This photo is one of the reasons that I am reluctant to agree. This Prickly Sow thistle has finally run its course having provided weeks of seeds to a variety of finches including bullfinches. However, as I wait until every seed has been removed it begins to look like a specimen from the House of Horrors. There are many similar sights throughout the garden and it probably is not a pleasing sight to some gardeners. However, this evening when I watched a young chaffinch efficiently strip the ripe kale seed pods to get a meal, I reminded myself that this is what this garden is all about. 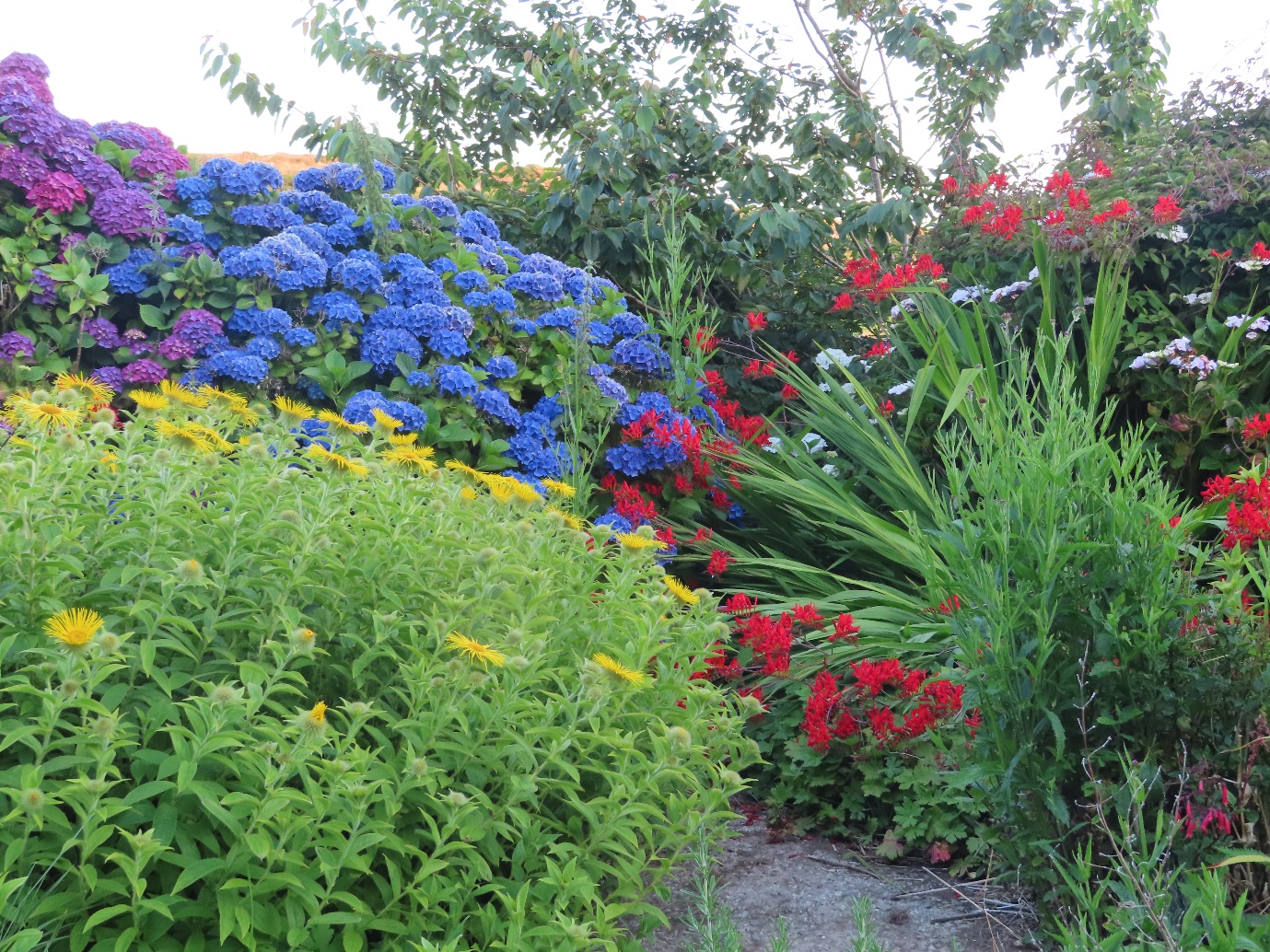 I have changed the name of my herbaceous garden to the ‘hysterical garden’ as it seems more appropriate. Despite planting many soft toned flowers, the ones that survive the winter tend to be the those with strong colours. I have no idea why but have replaced too many plants each spring to count. The four original hydrangea which were in front of the house when I moved here provide a strong backdrop with their deep blue, pink and purple flowers. The only soft colours are provided by the Sea and Wild carrot that have conveniently moved in uninvited. You can’t really tell but there is a path in the middle of this photograph. It will appear again in the winter. 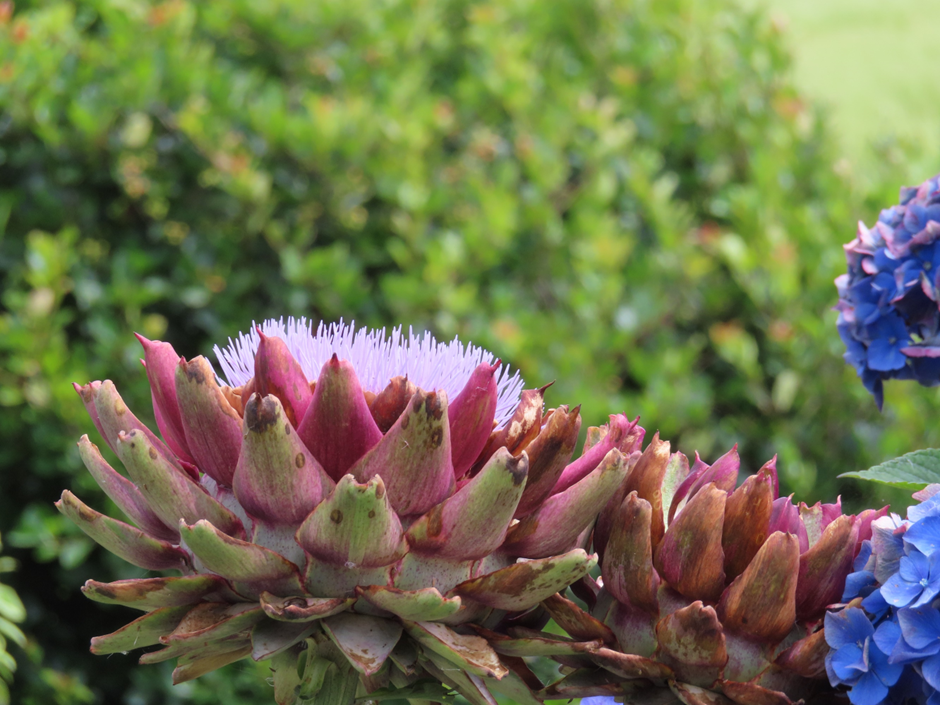 This artichoke is a fitting companion for the plants in the hysterical garden. It has survived four years of everything that the weather can throw at it with just a little protection from the neighbouring hydrangea. 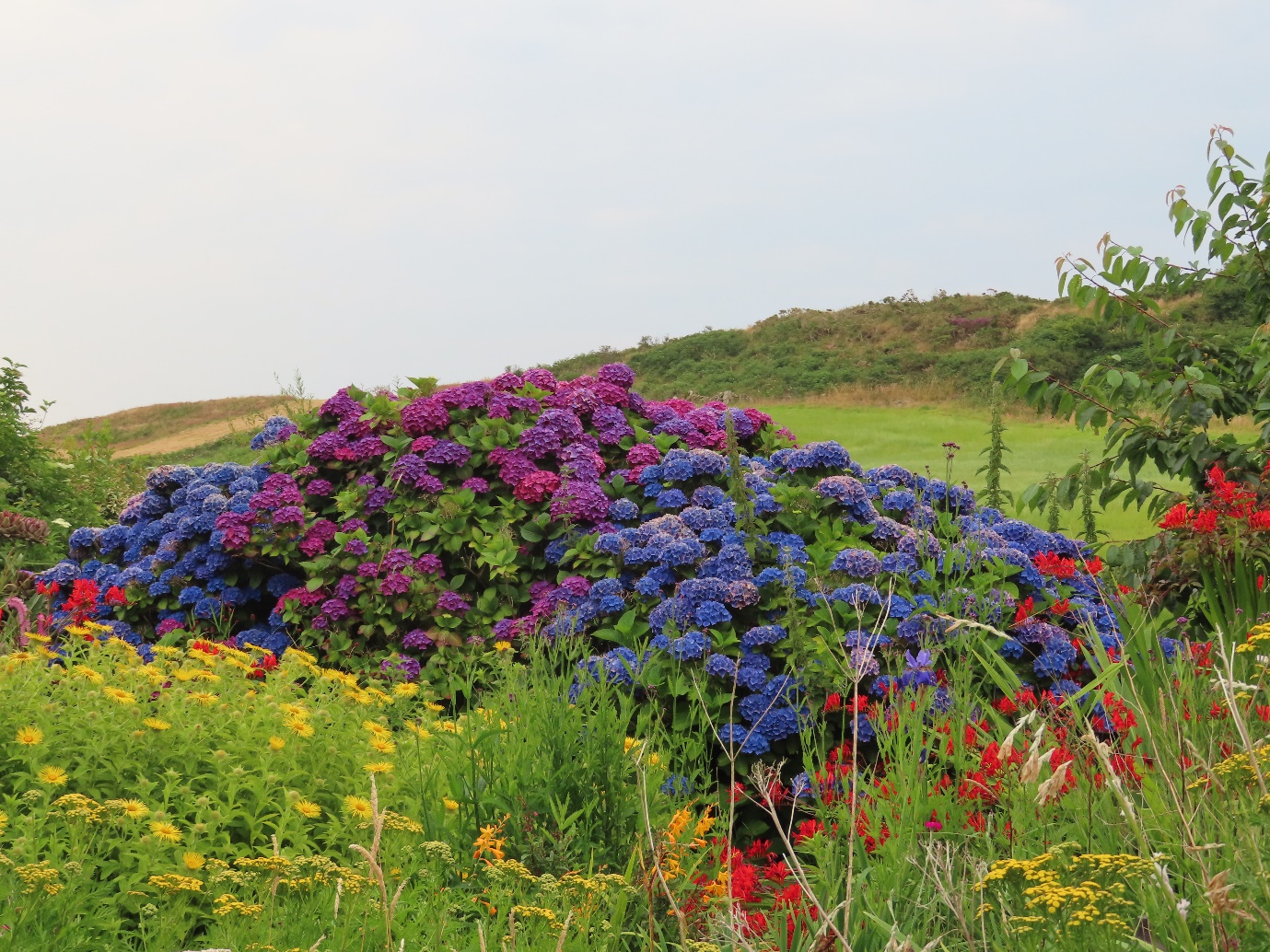 The original three hydrangea in all of their glory. They have converted me to this shrub and I now have over twenty varieties in the garden. 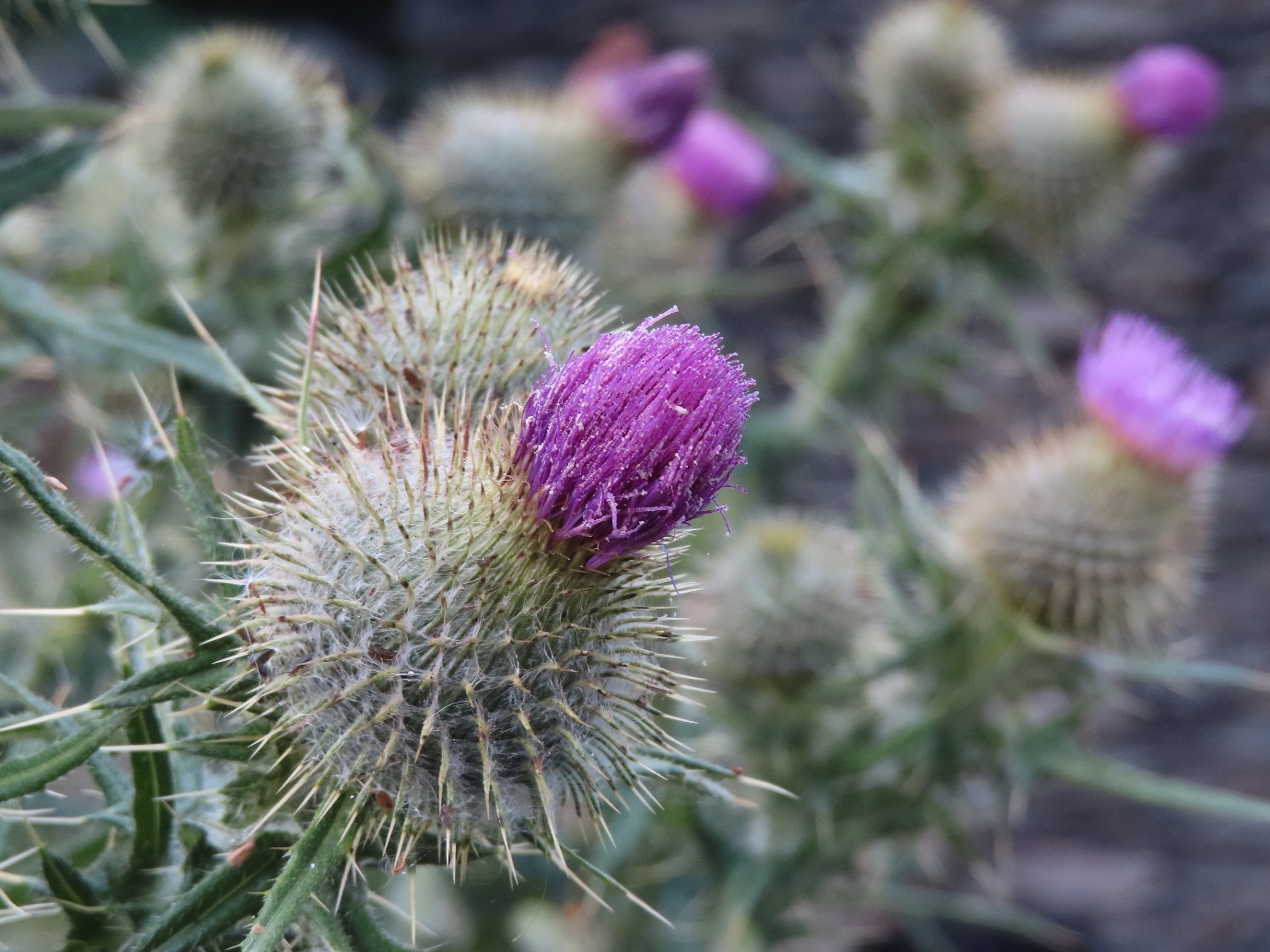 I once took my late husband to task for not being as romantic as poets like Burns or Shakespeare who compared their lovers to flowers. His response was instant. Apparently, he had always thought of me as being like a flower: the thistle ‘soft on top and prickly all over’. Since then, I have had a soft spot for this lovely wild flower. This specimen in the garden has over one hundred flowers on it and will provide a feast for the birds in the next few weeks. 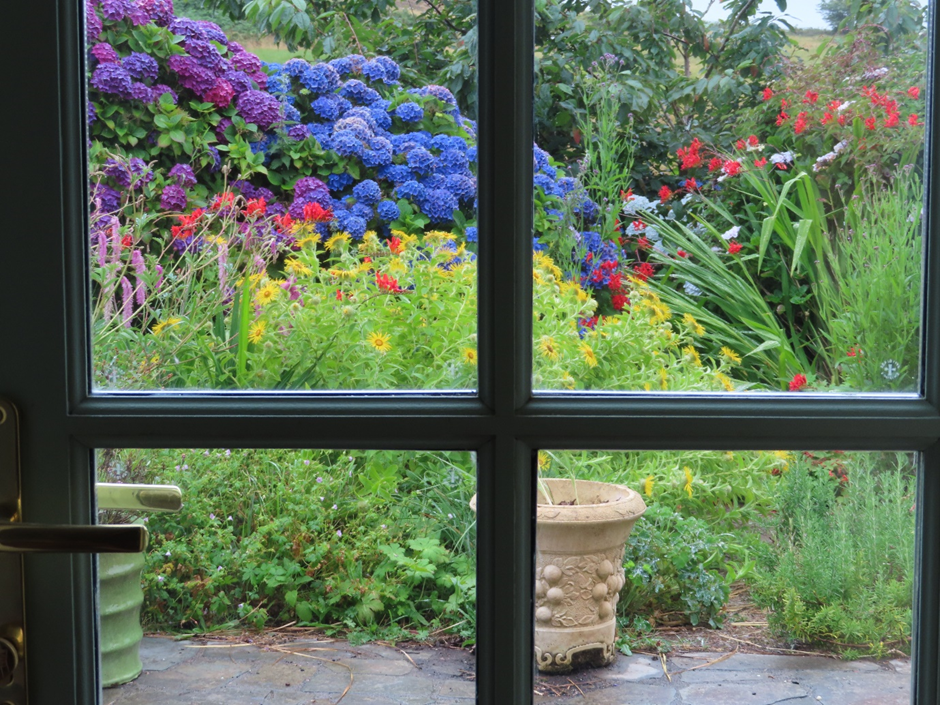 The views from my window are as important as the views outside as there are days when it is too wet to work outdoors. 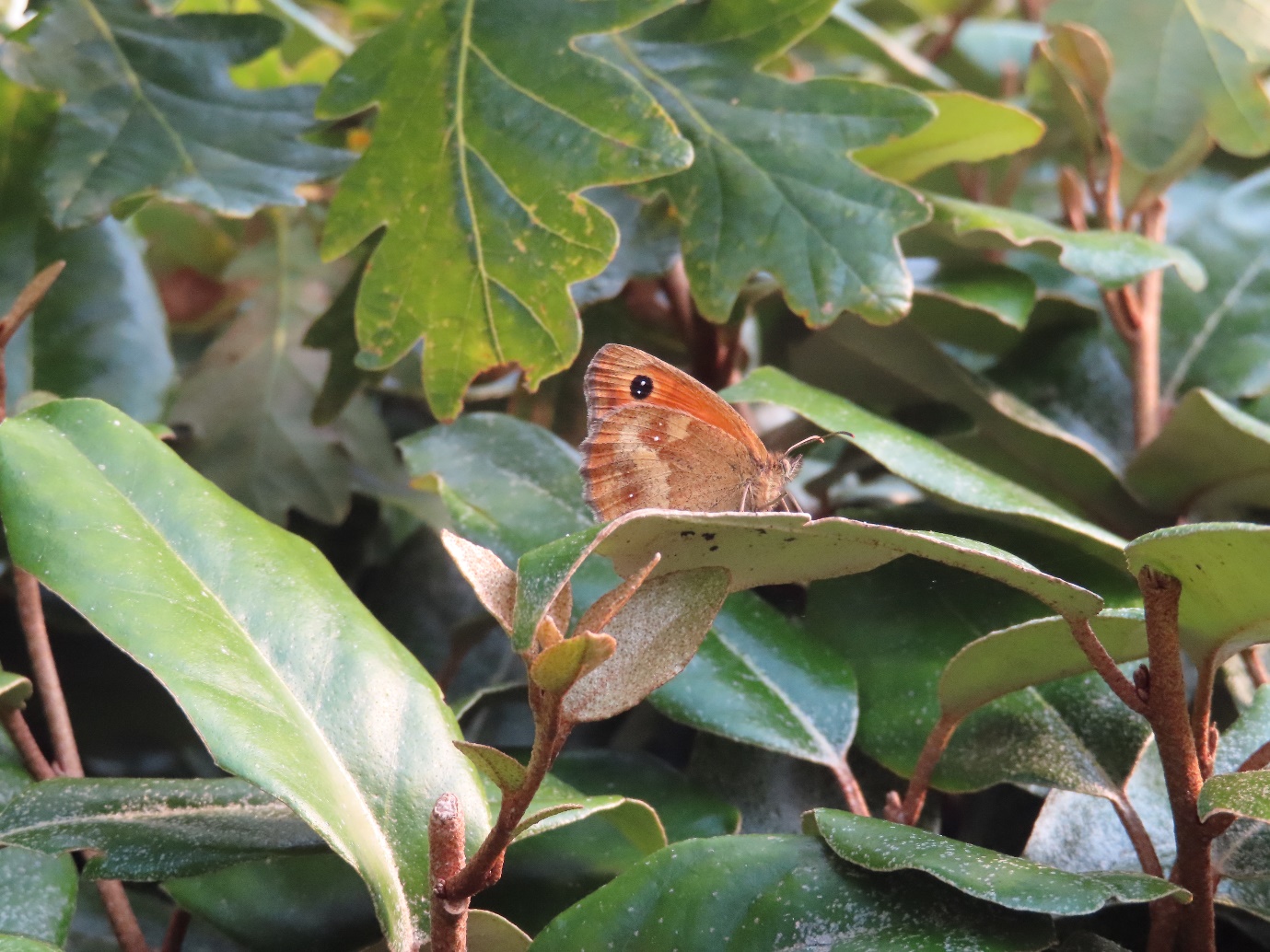 I am becoming concerned about the absence of butterflies in the garden this year. Speckled Wood and Gatekeepers have made an appearance from time to time. When I look through my records the Red Admiral and Peacock butterflies have appeared in August and September. However, many of the plants that they feed on have flowered earlier in the last few years and will not be available to them in these months. I may have to research other sources of food if the seasons continue to change. 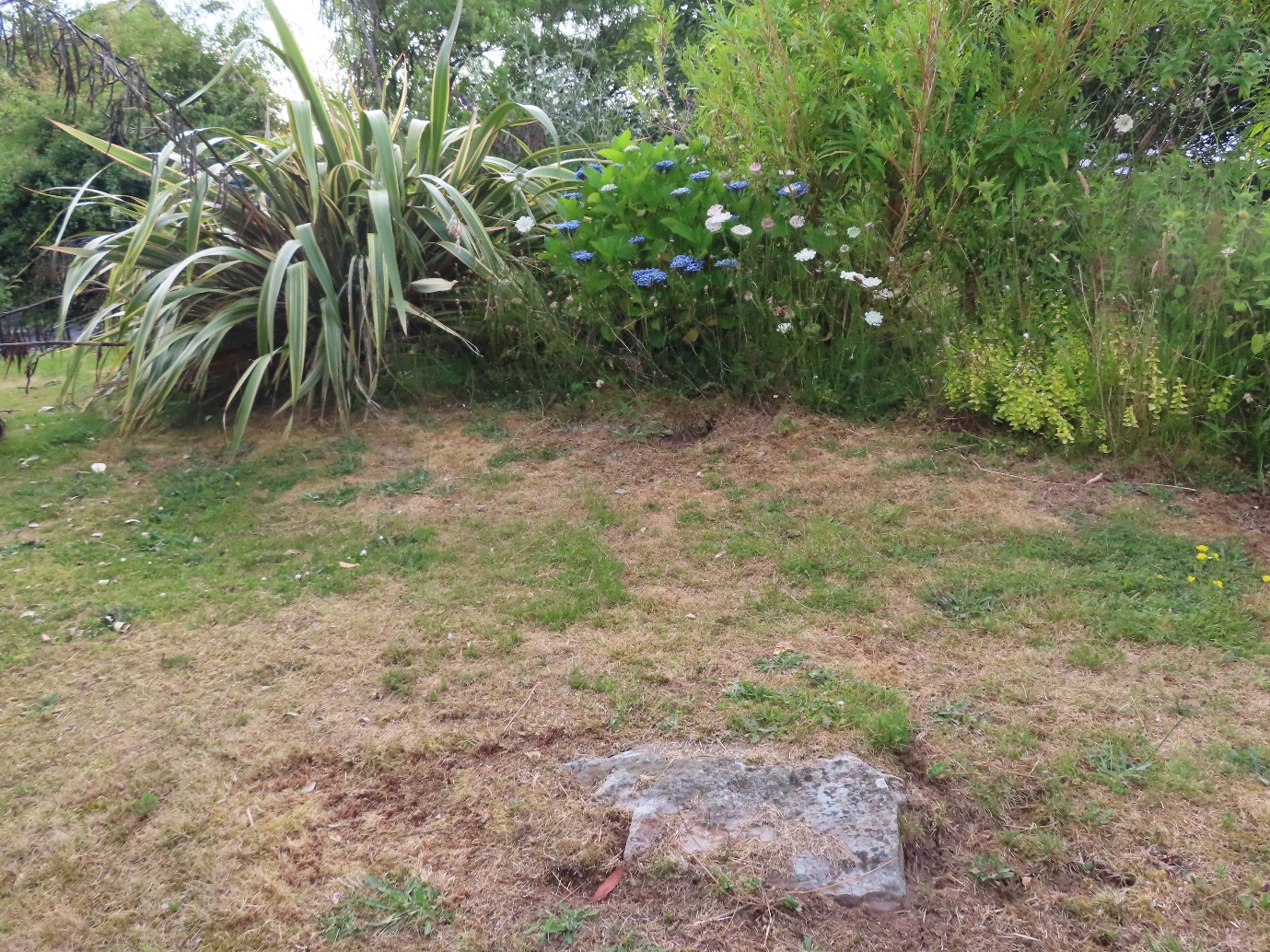 This is another area of concern. At one time I could cut the path at the top of the hillside with a lawnmower. Two very dry summers has caused the ground to dry out and expose the rocks that are now very close to or above the surface. The shrubberies that I planted on the hillside seem to have done a good job of holding moisture and soil although originally, I was doubtful about my designs. 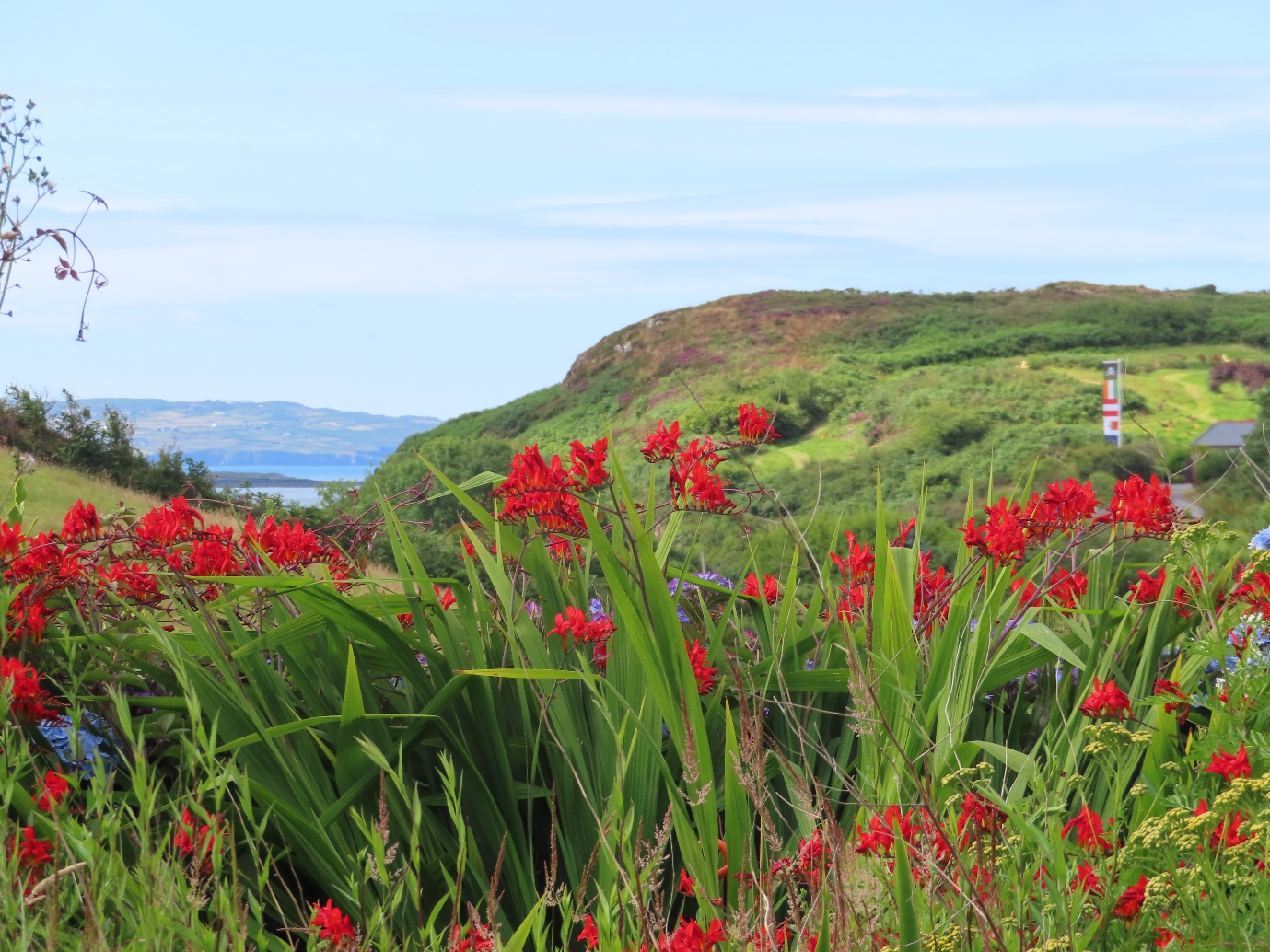 The view from the hysterical garden. Crocosmia Lucifer may get out of hand but it does add some drama to the view on a hot sunny day. 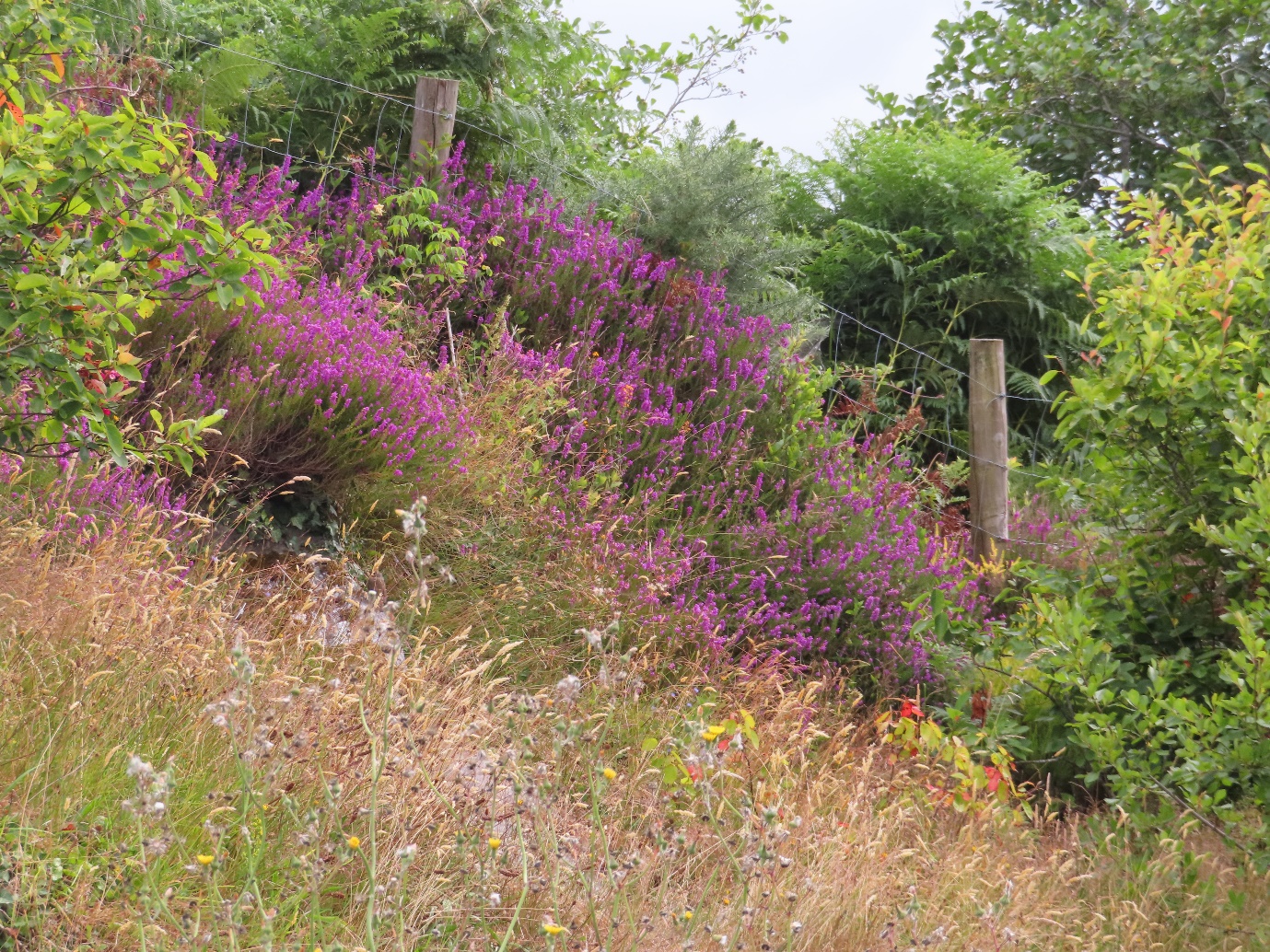 I have a tendency to take a rather academic approach to most tasks and gardening is no different. Carrying out extensive research before you choose and plant a shrub or plant has its advantages. I have fond memories of walking the glens of Scotland surrounded by heather as far as the eye can see. As there were a couple of small wild heathers in a far corner of the garden, I was determined to extend their domain. Eight years later my success can be measured by the dozens of heather plants that I have bought and killed. I was no more successful with cuttings of the native variety. Not one has survived. Meanwhile the wild heather has chosen its own planting scheme and is gradually taking over the original corner and now the bank behind the house. Soon it will hide the rather ugly but practical sheep fencing at the edge of the property. My contribution has been to leave the areas uncut for most of the year. It is looking as if my CV for any gardening job would consist of all of the things that I don’t do!