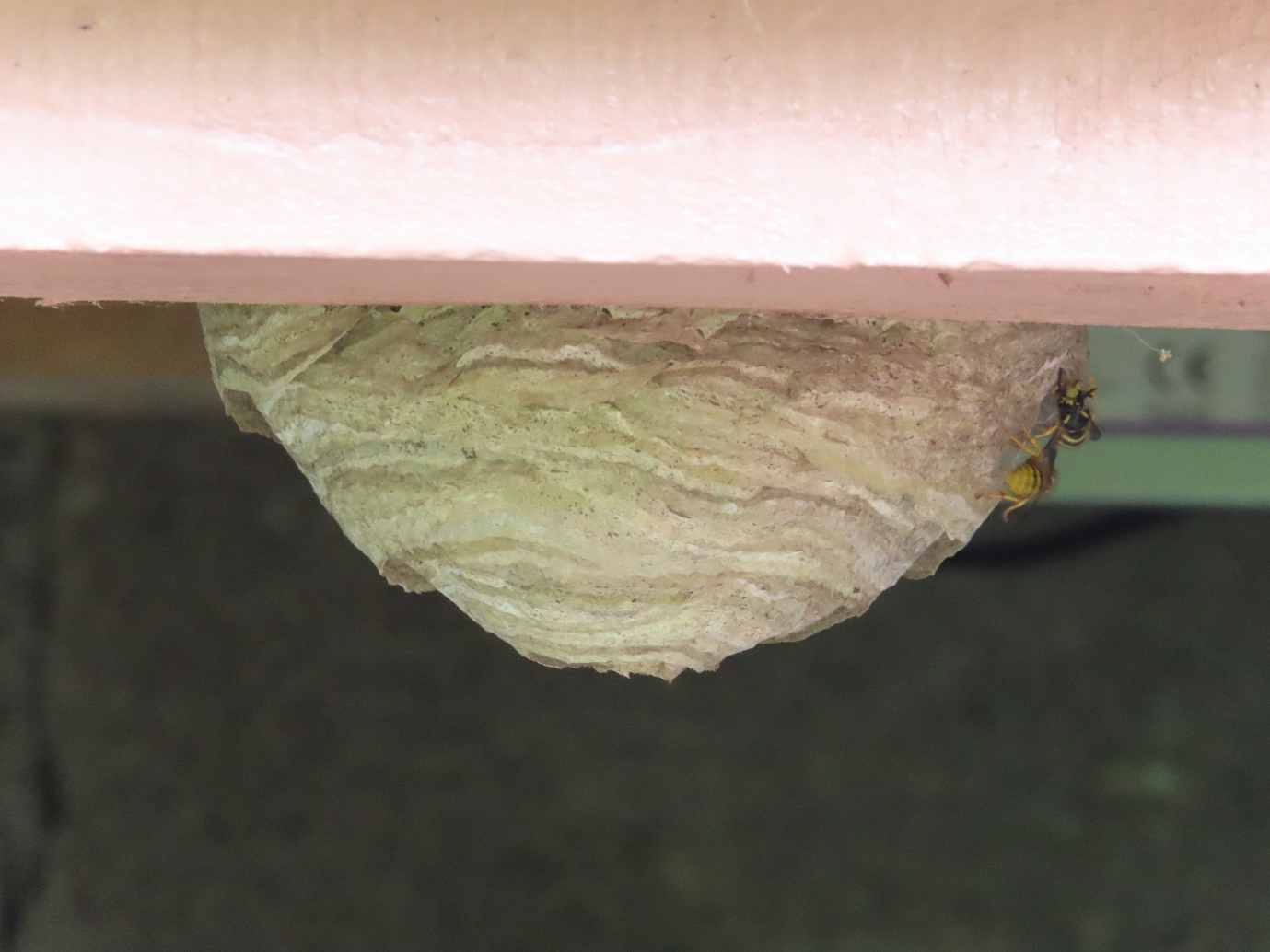 The first of my two wasp bykes.

My pump house is effectively out of bounds to me until the end of autumn. A routine check of the filters today turned out to be more eventful than usual and I did not see the wasp byke until I had been stung. I beat a hasty retreat and hope that I don’t have any issues with the well before the swarm dies off in winter. In the meantime, forewarned is forearmed and I am setting aside appropriate ‘protective’ clothing just in case I have to enter the house again before the visitors leave. 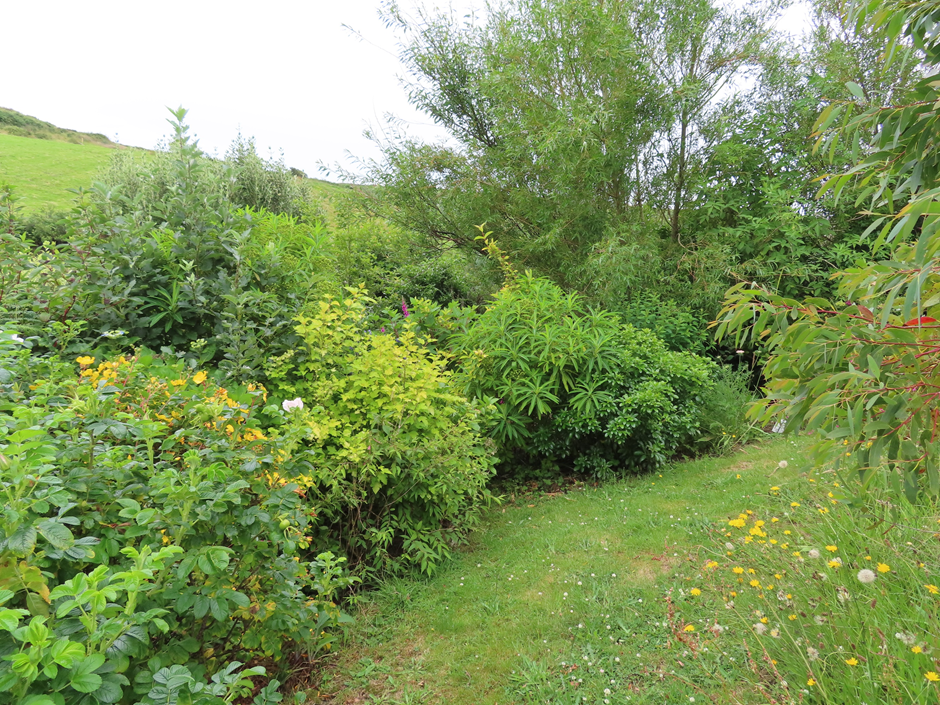 The hedgerows to the south of the garden. The perfect shelter for blackbirds.

Wasps might be the most dangerous of my partners here in the garden but I have decided that blackbirds are garden terrorists. This week I have managed to collect a kilo of blackcurrants from my three bushes under the beady eye of a couple of annoyed blackbirds. As I try to collect my share, they lurk in the shrubbery that I have kindly created for them making it clear that the fruit garden is their territory. As they have already eaten the bulk of the fruit you would think that they would be happy to leave the dregs for me. Their latest act of revenge has been to toss out all of the leaf mould that I have used to retain moisture in my planters and in the beds around the garden. I say toss but they have the throwing skills of shot putters and I have no hope of collecting the material for re use. 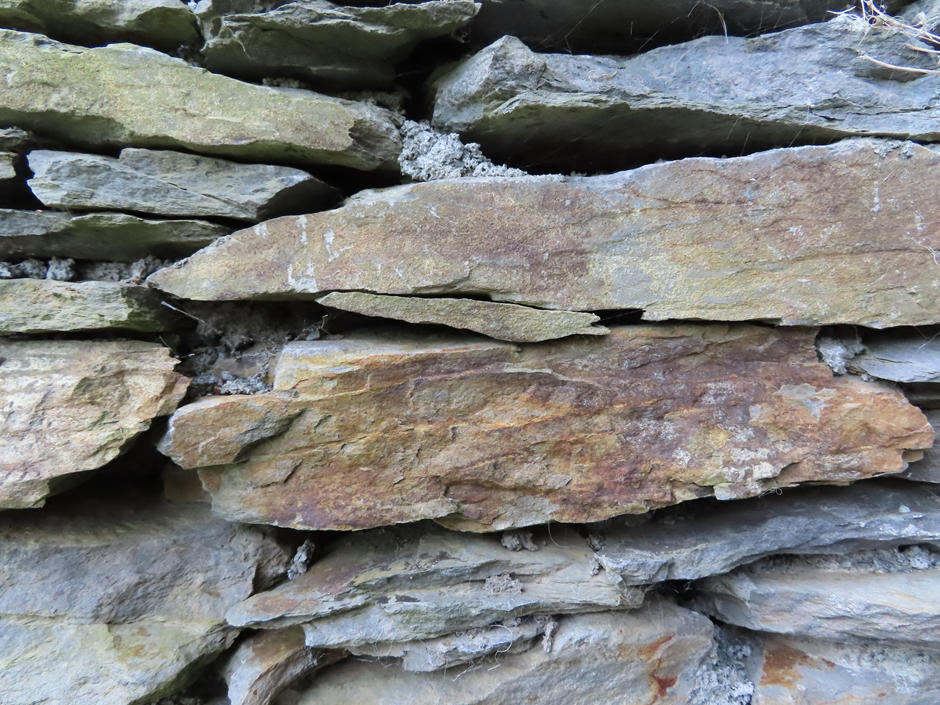 The leaf-cutting bees are back and scouting the walls of the house for suitable places to lay their eggs. By chance alone I planted roses at the perfect distance from the semi dry stone walls so the bees have food and accommodation close to hand. I can watch them for hours as they struggle back to the walls with leaves twice their size. Even better, they do not sting so I don’t have to take the same precautions as I do with the wasps. I like to think that these bees have hatched from the eggs laid by the bees last year and that they are returning to their place of birth. I have tried to get a photograph of them in action but they are too quick for me. The best I can do is a photo of the wall where they are building their nests. 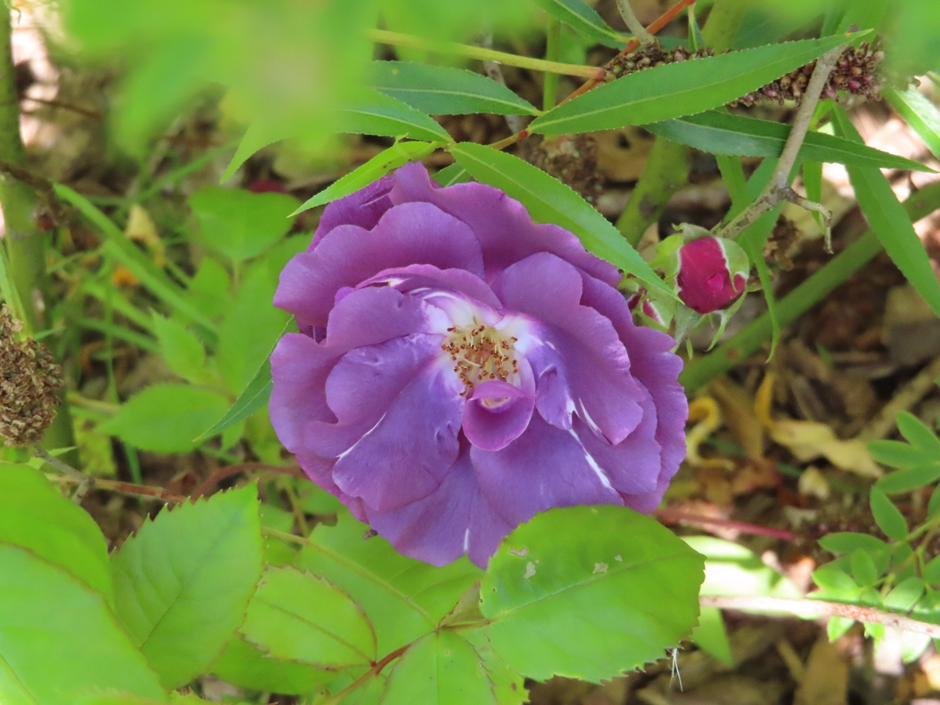 One of the roses providing food for the leaf-cutting bees. 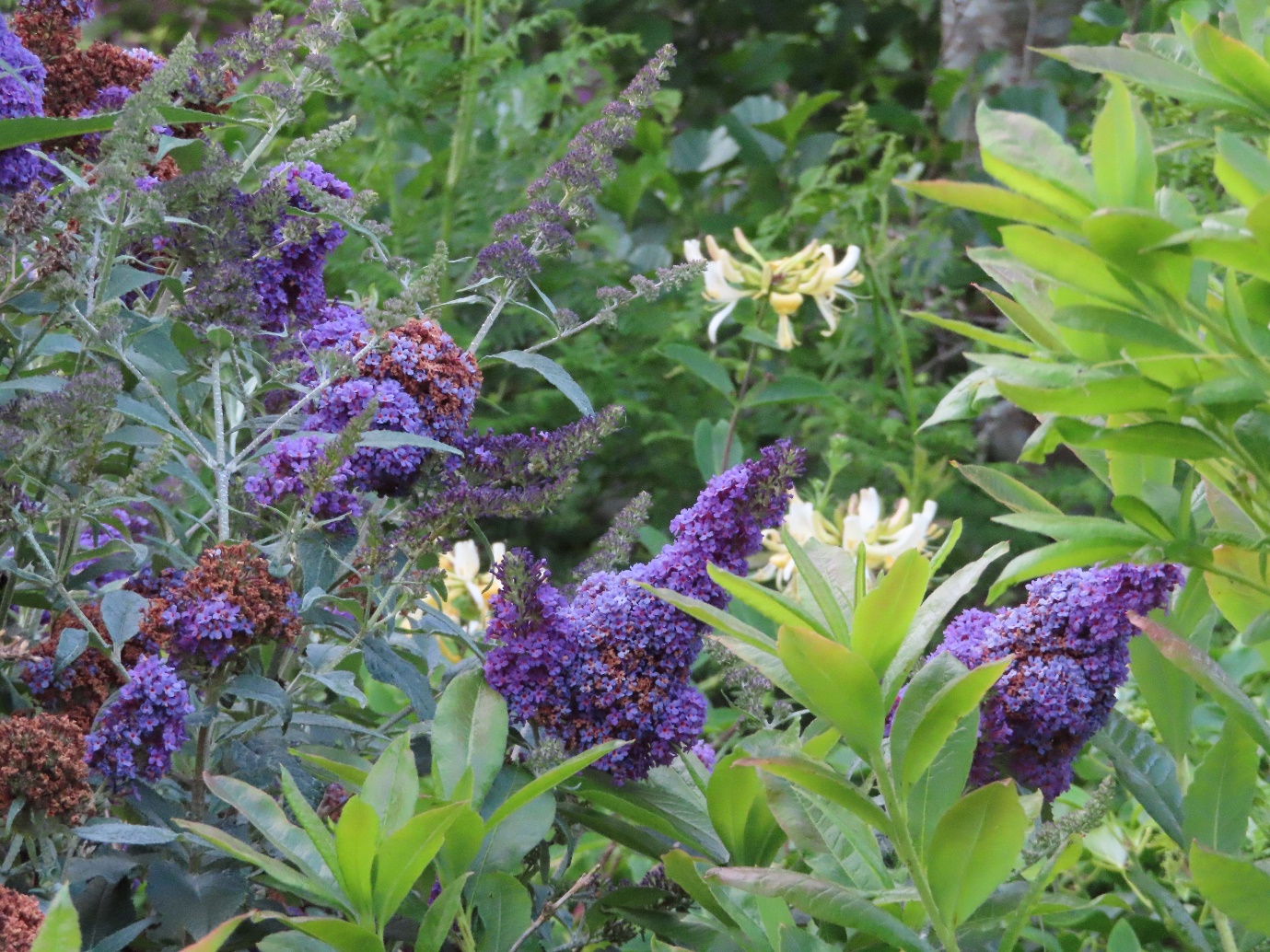 It has been a very strange year and the plants are acting accordingly. I lost a number of buddleias during the storms in May, but those that survived are thriving. There have been few butterflies so far but I hope that they will soon return to one of their favourite shrubs.

A branch from the oldest buddleia in the garden Buddleja Weyeriana ‘Sungold’. This was here long before I arrived ten years ago and it has survived many years of storms and salt-laden winds. Despite losing branches each year it soldiers on regardless and the dead branches take on a beauty of their own. 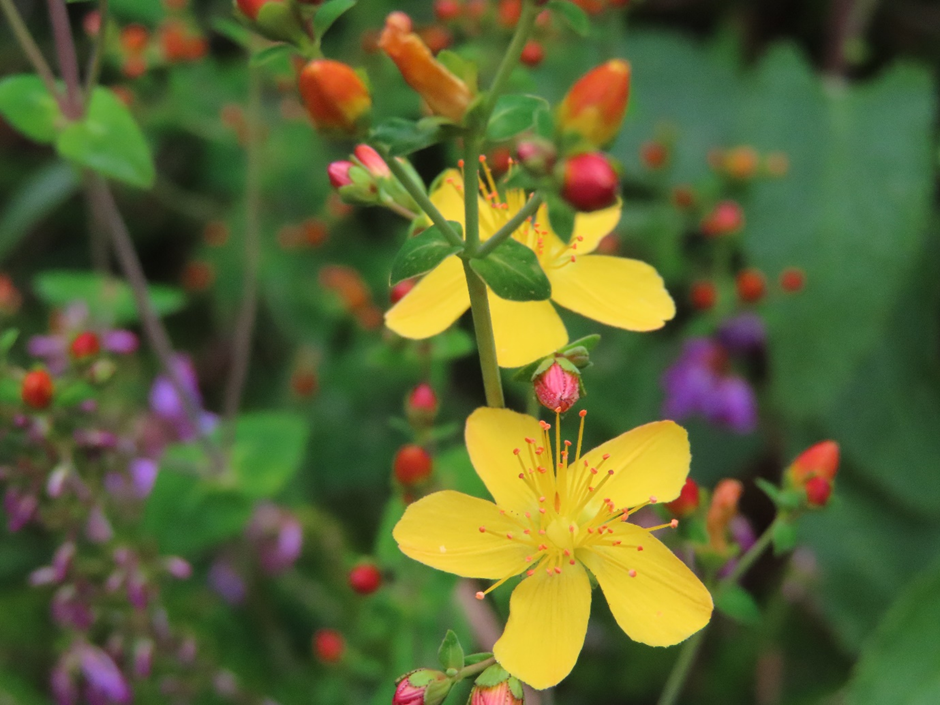 At the back of the house there is a steep bank at the top of which is a very old dry stone boundary wall. When I moved here I was like the proverbial mountain goat scrambling up and down the bank with ease. I even strimmed the grass regularly. Ten years later the bank appears to have become much steeper and on the few occasions when I do climb it, I look more like a scuttling crab than an agile goat. This is not the reason that I have left the bank to its own devices for years now cutting the grass just twice a year. In truth the area is so natural and beautiful that it does not need any improvements. More importantly when left alone it is home to dozens of wild flowers. Many like stonecrop, creeping cinquefoil and the tiny Hypericum (see above) can only be seen if you pay close attention. All of these would disappear if I cut the grass regularly. 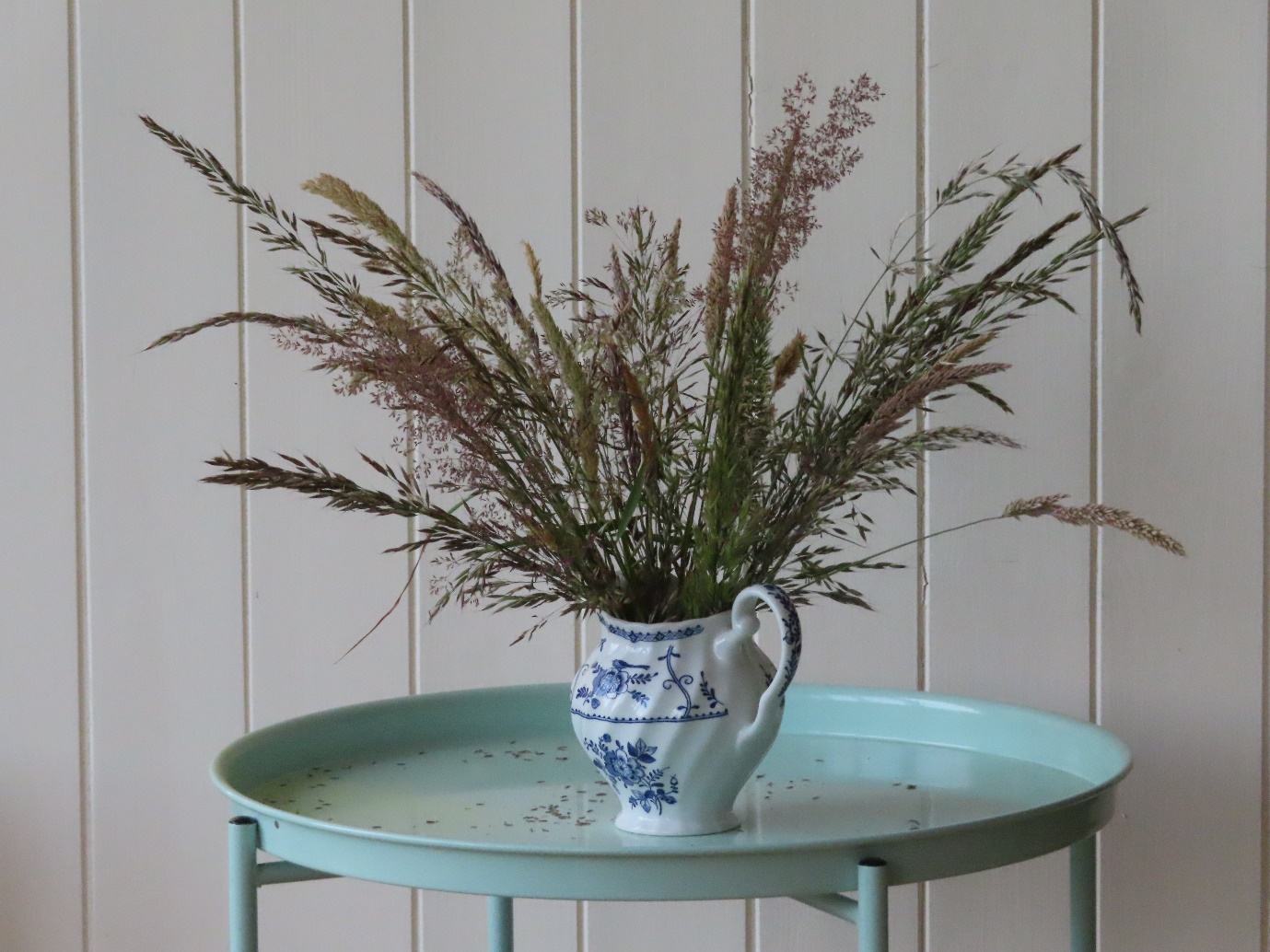 The bank is also home to a number of attractive grasses. I have counted five so far and hope to identify them later in the year when there is more time. In addition to the lovely seed heads the seeds are a magnet for birds. I disturbed a small flock of goldfinches the other evening invisible amongst the wildflowers and grasses. They seem to have decided to spend the summer here or close to the garden and it is good to see them enjoying the wild areas. 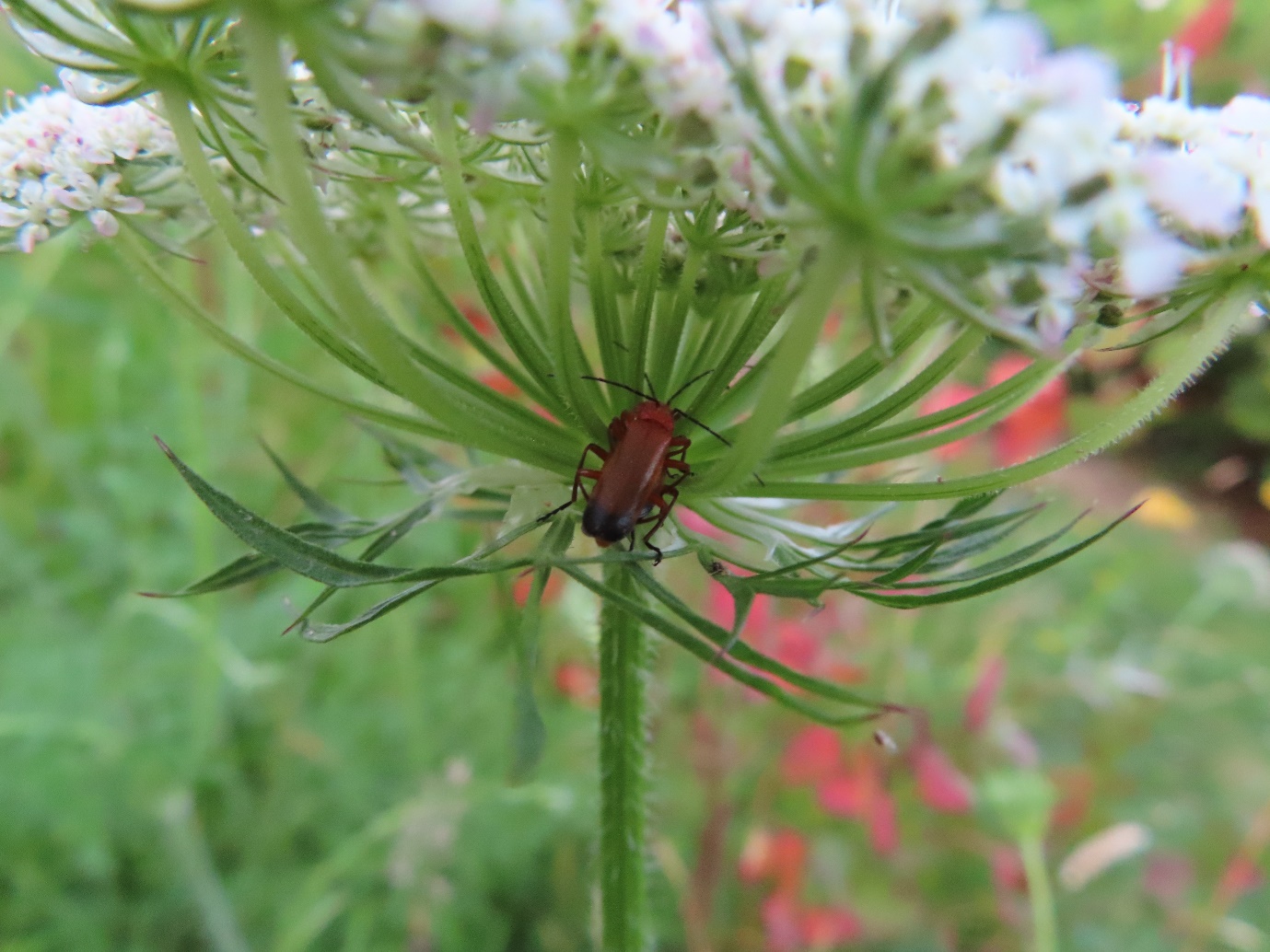 Other wild flowers are also attracting wildlife and the soldier ants (above) love the Wild and Sea Carrot plants that are starting to bloom now. I am not sure what their place in the universe is, as they seem to spend all of their time mating but I presume that they enjoy life. This is actually a picture of two ants as you can tell from the number of legs. 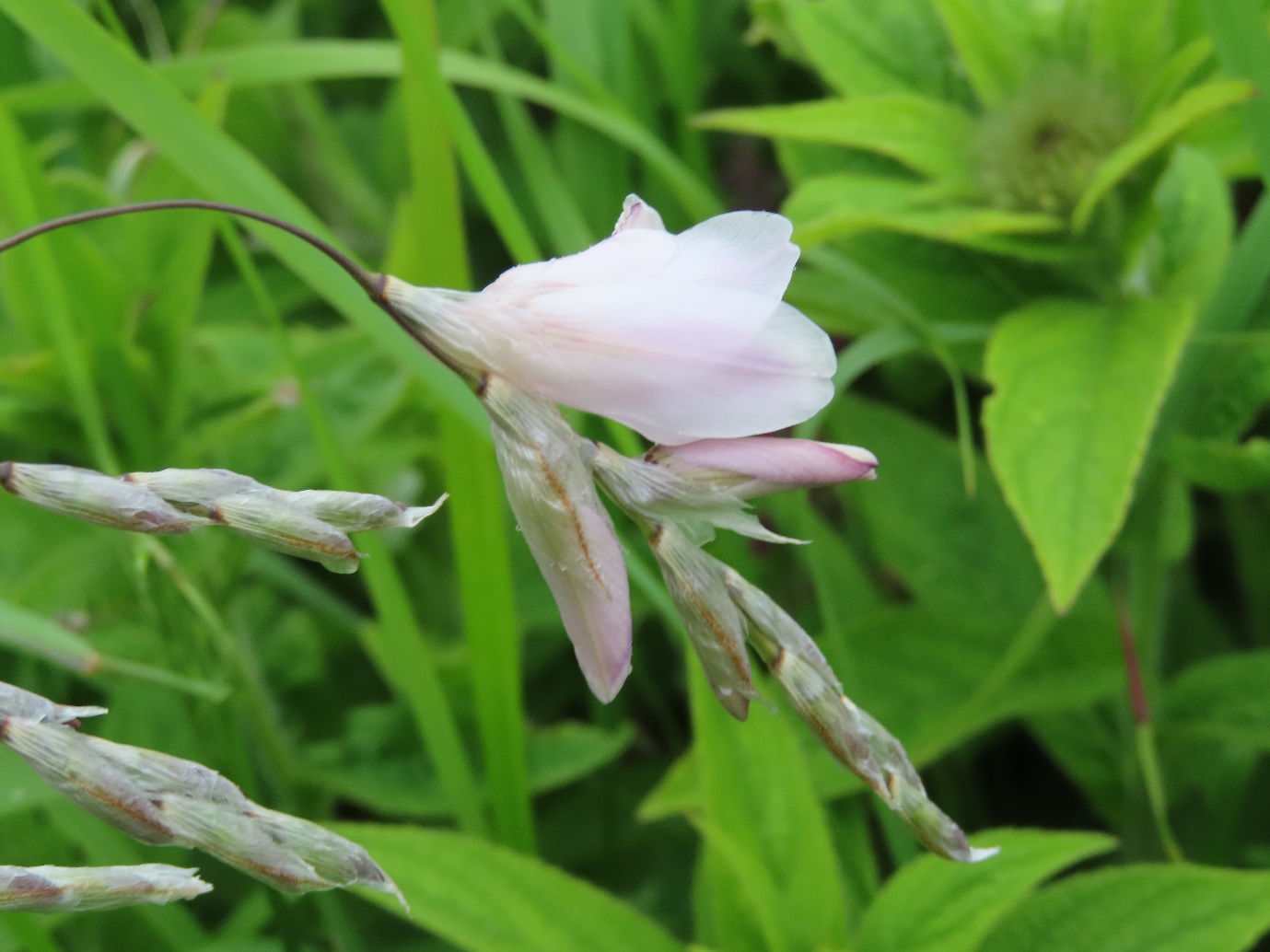 The herbaceous bed is full of colour, although not as I had originally planned it. Lychnus and these lovely Angels’ Fishing Rods predominate at the moment despite my attempts to curb them. I planted hydrangea at the back to give some protection from the prevailing winds and these are just beginning to provide a burst of colour. 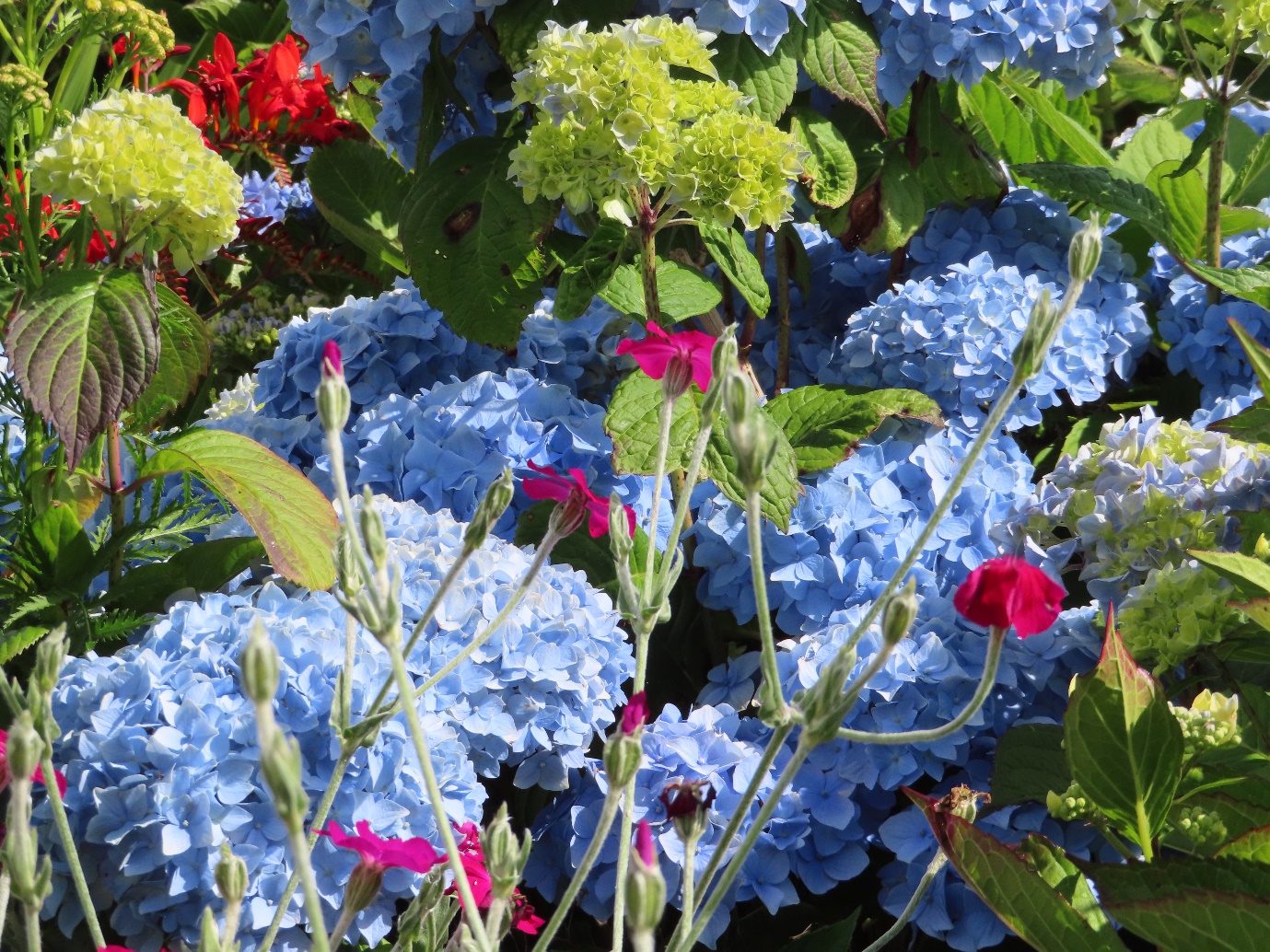 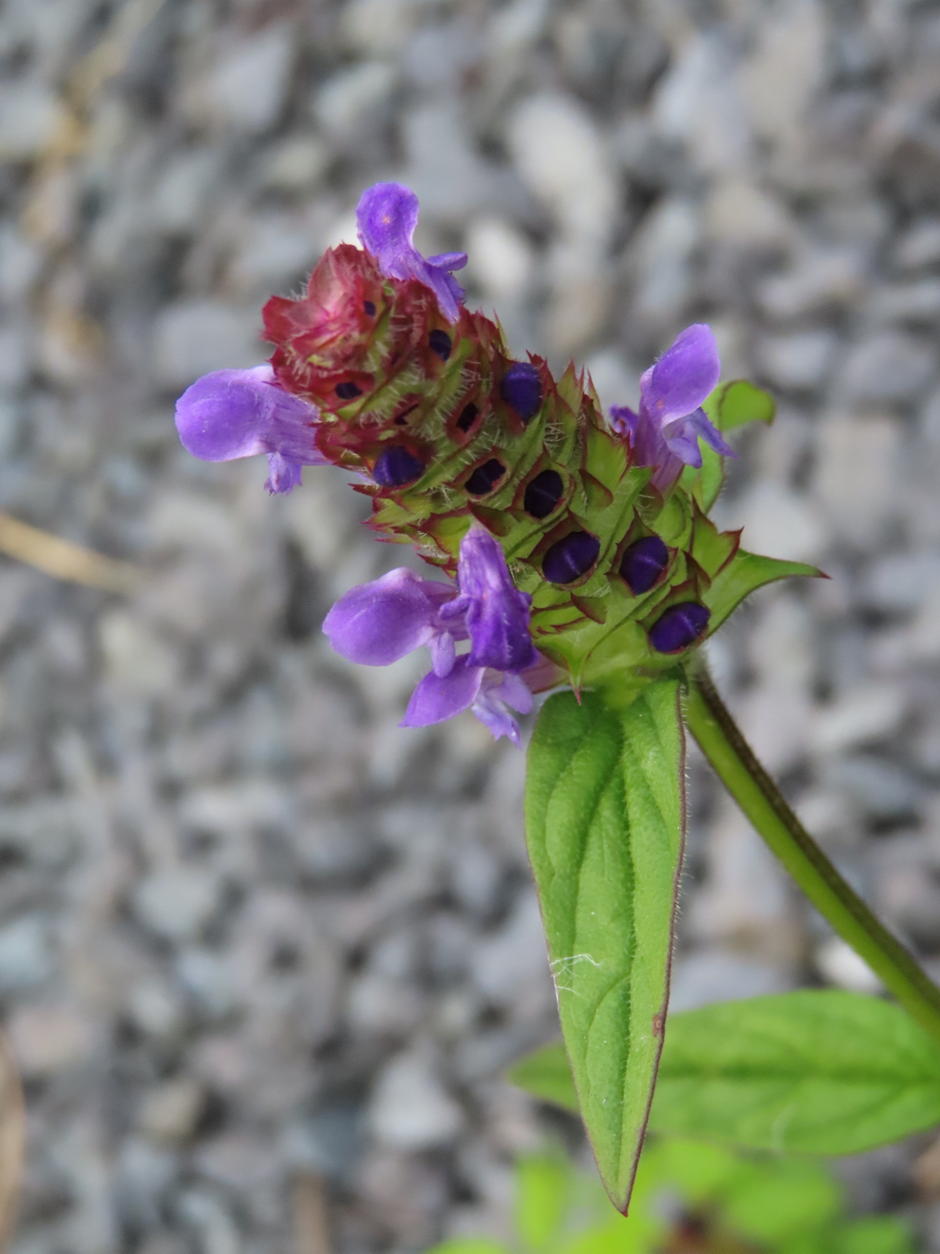 Self-heal (Prunella vulgaris) loves the sunny spots in the garden and is at its best at the moment. It has been used as a medicinal herb to staunch and heal wounds. At the moment I am more interested in a medicinal cure for wasp stings. With over 50 varieties of wild flowers in the garden there must be one apart from Dock leaves that serves this function. The stings are rather annoying as I have been careful to leave the nest in the pump house alone. However, for the first time in my memory I have two wasp bykes! I discovered the second when I was adding to one of my compost heaps and noticed that Millie seemed to be struggling to get rid of something around her head. I managed to rescue her unharmed, but for some reason I was the one who got stung – twice. Unlike their cousins in the pump house these wasps seemed particularly aggressive, so I will have to abandon my compost making until winter. I am sure that there is some significance in the fact that the wasps have built nests in the two parts of the garden where I have finally created a warm sheltered seating area. The final indignity occurred when I tried to weed in a tiny garden at the bottom of the drive. I call it ‘horsefly heaven’. That really says it all and I now have another place that I will have to avoid until the autumn.