Having decided to take a rest from new projects I have immediately started another one! This area is under some pine trees and I have not had much success in growing anything so close to them. However, the space is now almost totally protected from the winds by a maturing hedgerow and shrubs, so I am making another attempt at planting it. I have decided on a miniature Mediterranean garden as the corner can also get very hot on a sunny day. The first step was to plant an olive tree that has been sitting in a pot for years. Within days of planting, it immediately started to produce new leaves. Heady with this success I have now added a fig tree – this time in a pot. The remainder of the planting consists of lavenders, rosemary, sage, and thyme. Fingers crossed. 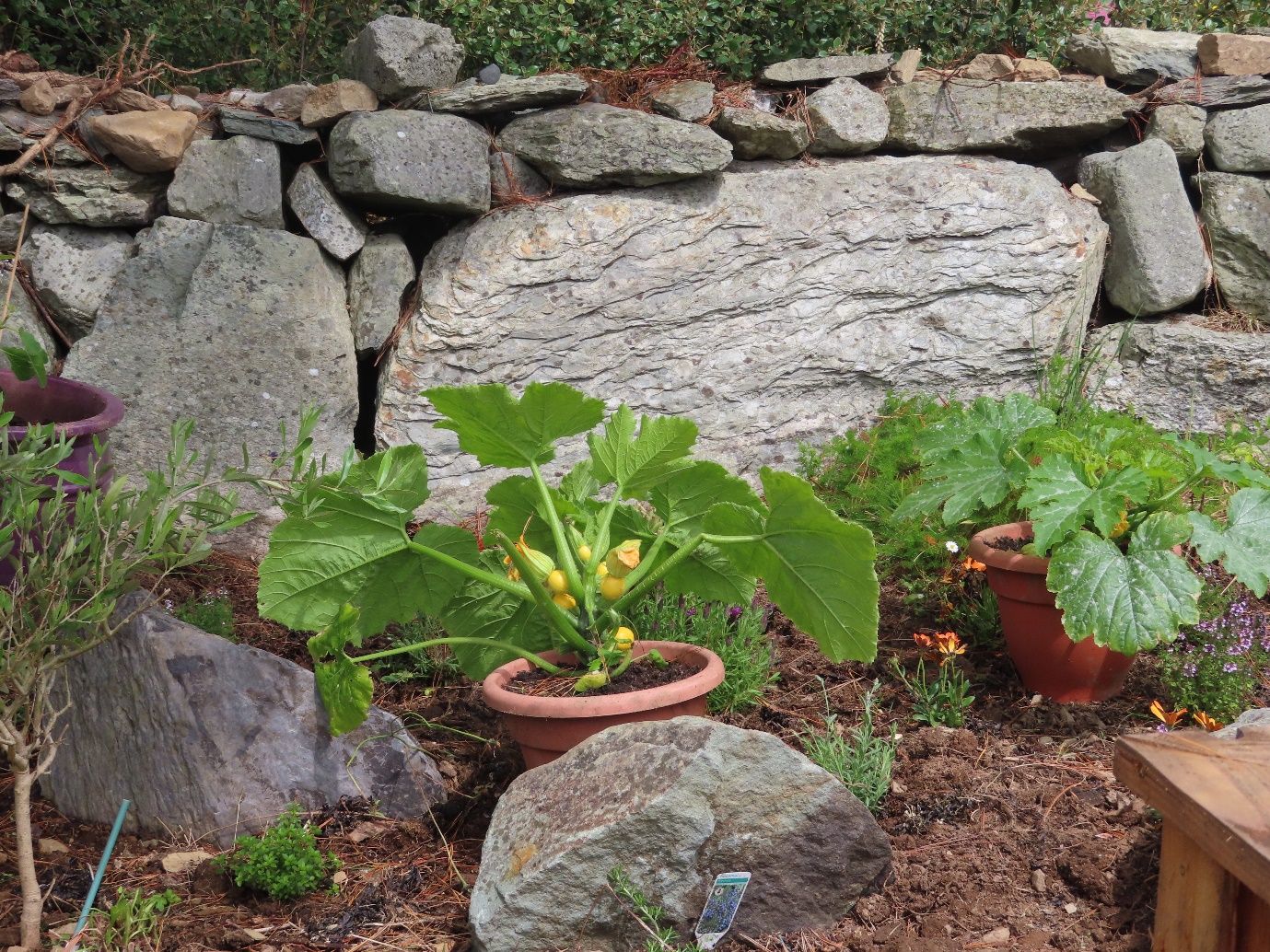 I want the plants in this area to highlight the lovely old dry-stone wall to its north side which is why the emphasis has been on herbs and lavender. I have also added some ‘patio’ courgettes which I bought in the market in Skibbereen. These can be planted in large pots and do not have a trailing habit. They are already doing much better than my previous crops and can be easily moved if not doing well. I suspect that I will stick to these varieties in the future. 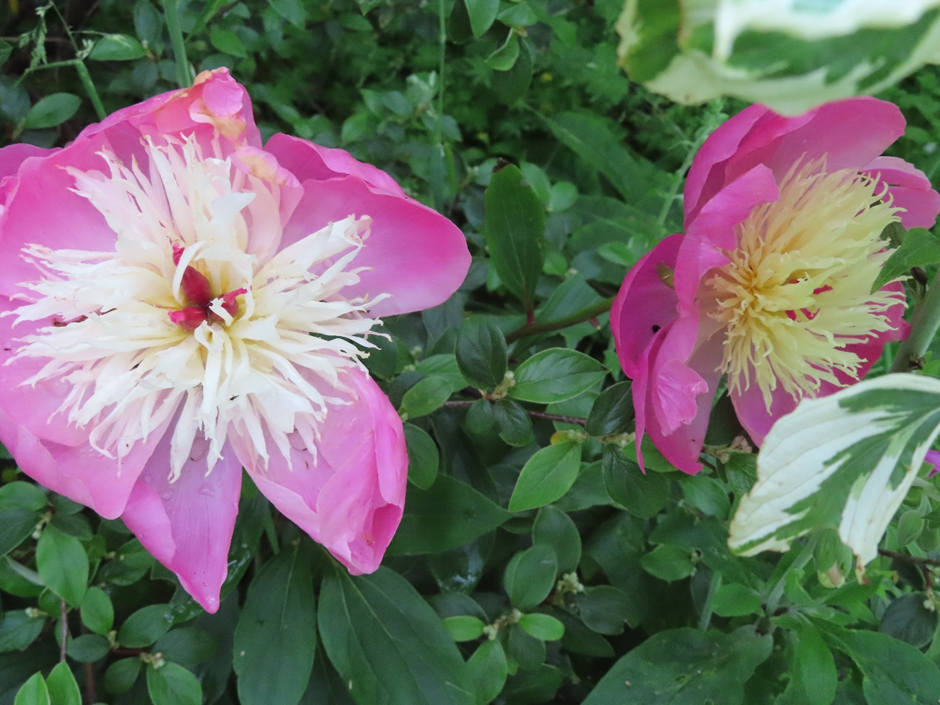 The Peony ‘Bowl of Beauty’ is continuing to flourish and these seem to like almost total shade. In fact, they were completely hidden from view and I almost forgot that I had planted them. Given their success I intend to add to my collection next year. 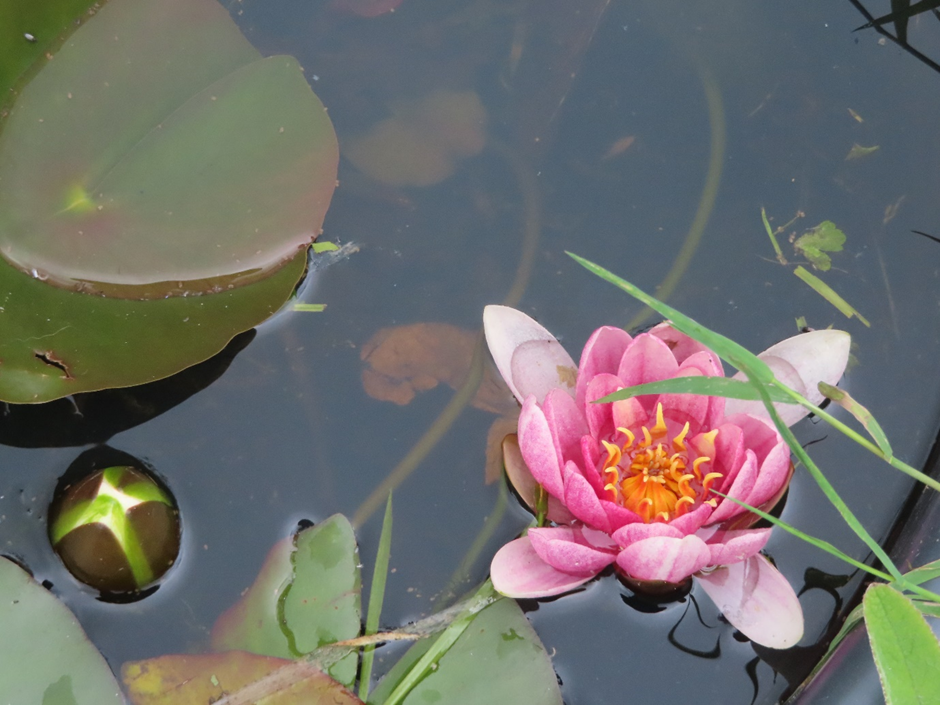 I would love to have a pond in the garden but there are two obstacles to this. Most of my garden is on slopes ranging from mild to steep. I am also unwilling to use any plastic to line one which limits my options considerably. I continue to research the matter on the internet to try and find some ‘nature’ friendly method of lining a small pond but have had no luck so far. Meanwhile in complete contradiction to my previous statement this water lily is temporarily living in a plastic pot sunk into the ground as I was unable to wait before buying this beauty. It has survived the cramped conditions for two years not but I would love to ‘set it free’. 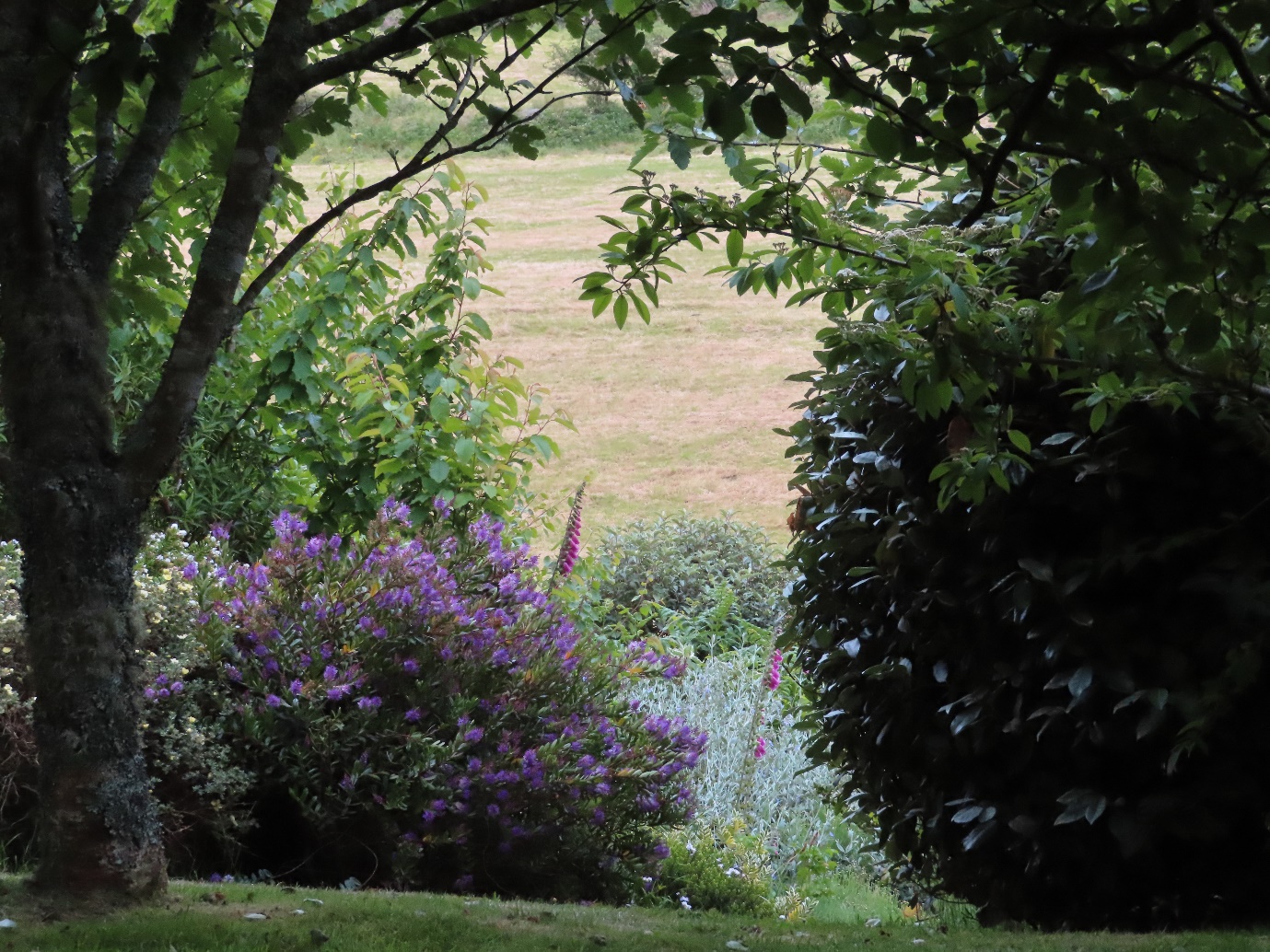 In recent weeks I have been trying to spend some time appreciating the garden rather than working until I am too tired to notice what I have achieved. This is one of my favourite views as the tree on the left is the only thing that was in this picture 13 years ago . The rest was an open hillside culminating in the ubiquitous barbed wire fence. The thrushes and blackbirds love this area as the bushes are dense. They were completely absent thirteen years ago so it is nice to see that I have provided a suitable habitat for them even if they are robbing me blind. 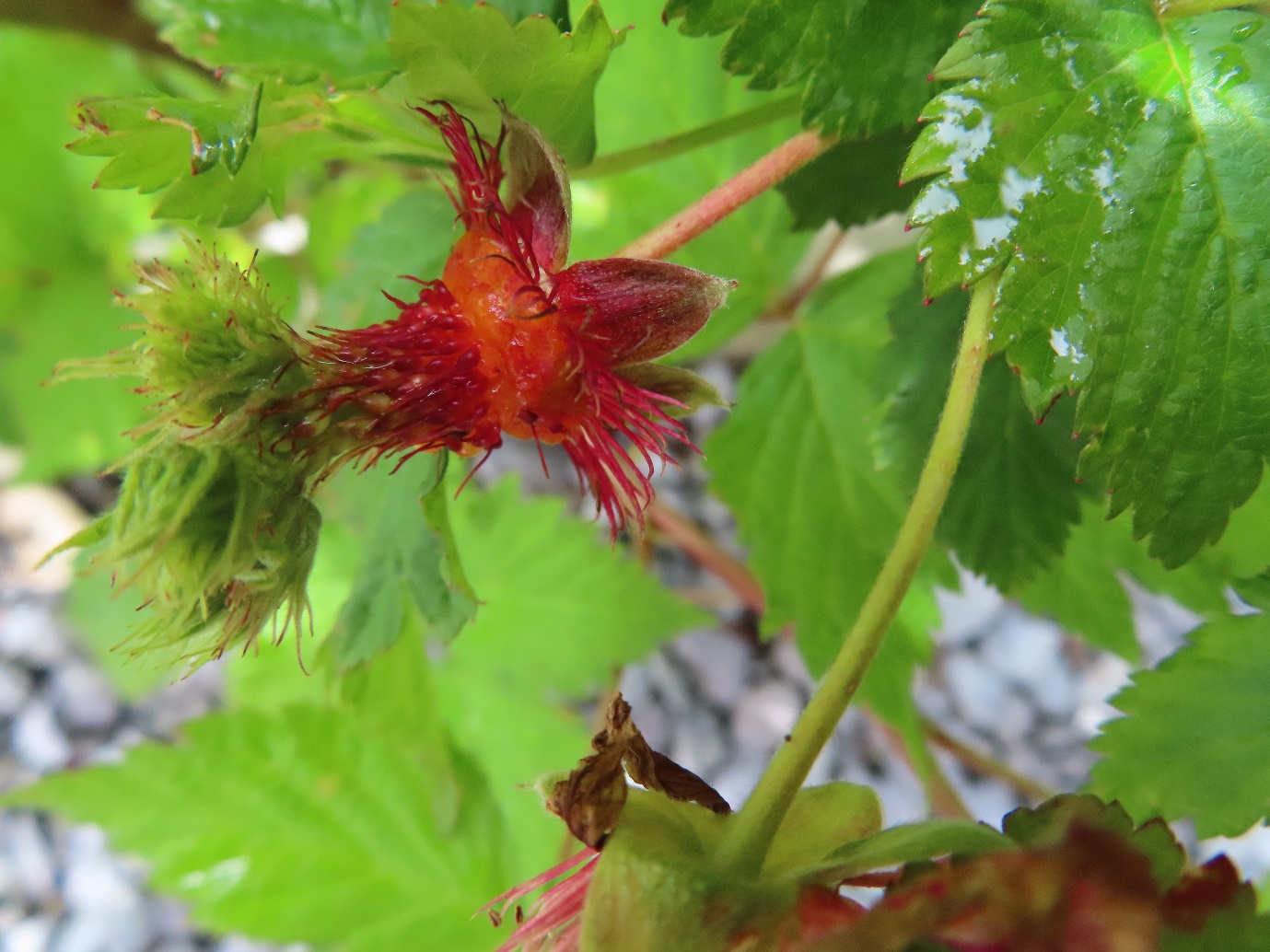 The Salmonberry Rubus Spectabilis, like the Water Avens is one of those flowers that continues to provide a dramatic display after the petals have fallen. It is found on the Northwestern American coast and is a relative of our bramble. It spreads quickly if not controlled but I will keep it in check. 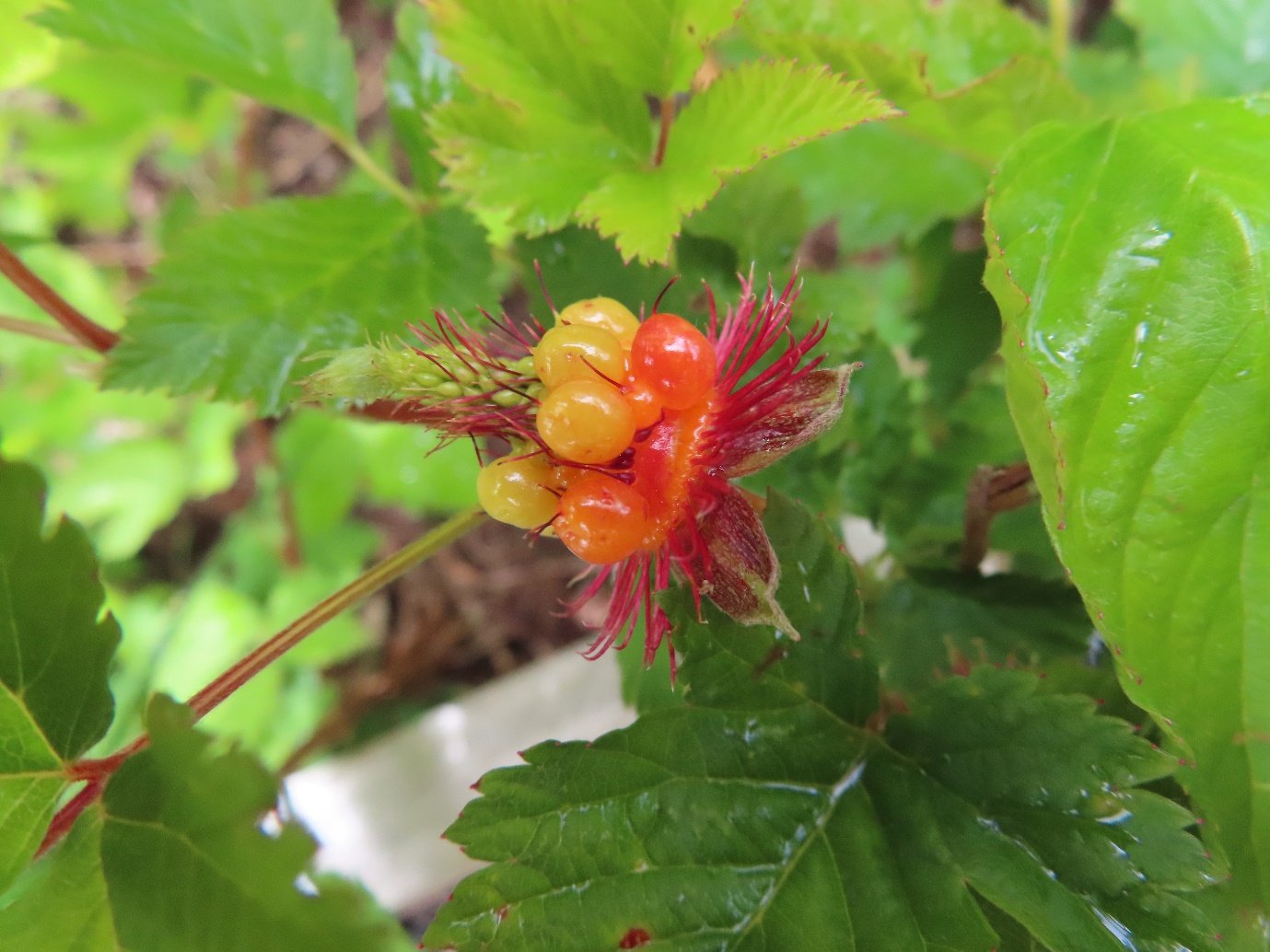 Not only does the salmonberry have berries but they are edible. Well technically they are ‘fleshy aggregated droplets ’ but berries seem much easier to remember. They have been part of the Alaskan indigenous peoples’ diet for thousands of years and are often served with smoked salmon. I must try it if the birds leave me any berries although this is doubtful as they are always hovering around the bush. 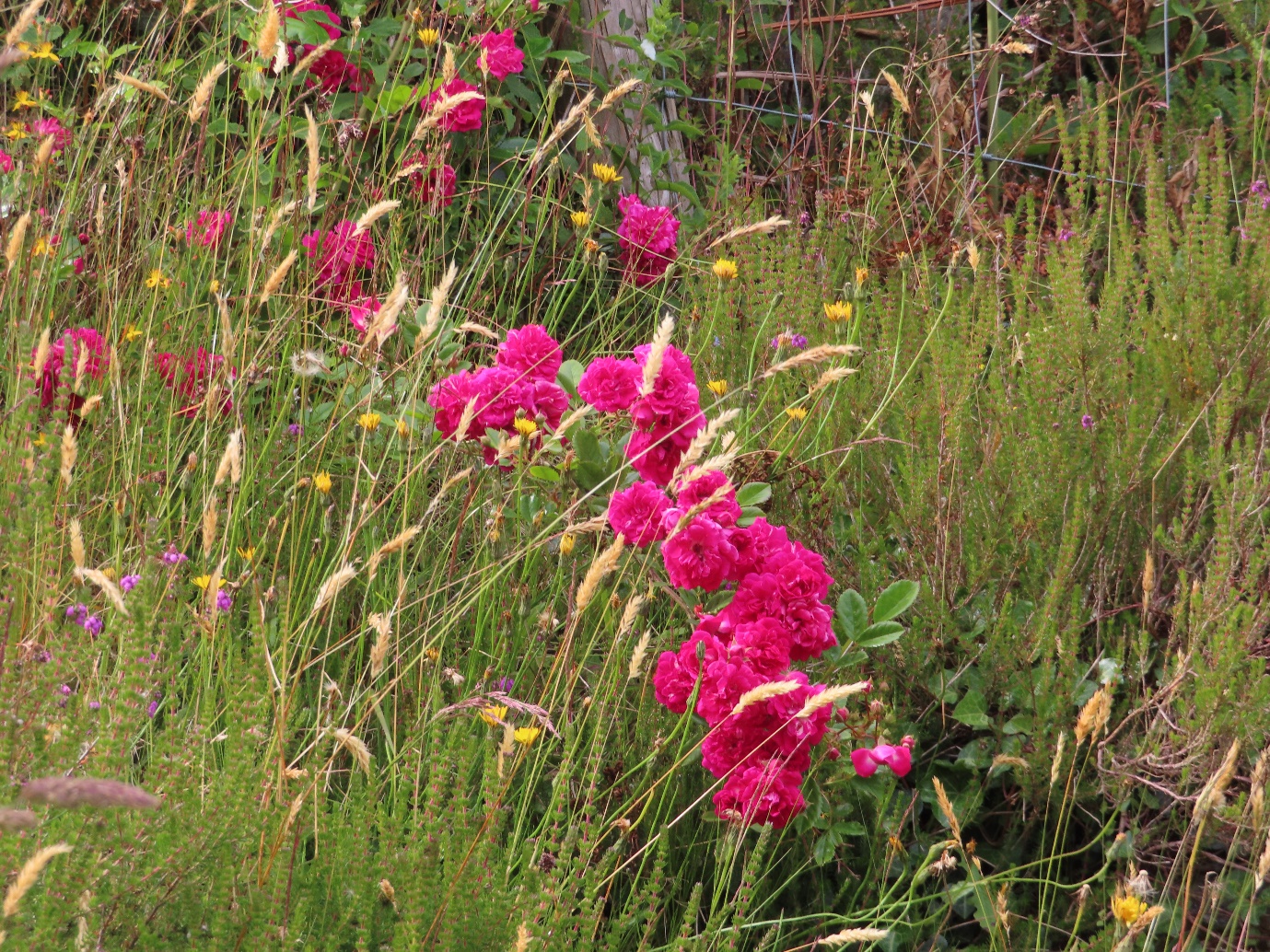 Behind my house is a steep bank topped by a dry-stone wall. As the years have gone by and I have aged this bank has become steeper and steeper and I now slide down it to reach safer ground. In the early years I planted some rambling roses in the hope of training them along the wall and fence. In the absence of any guidance, they have decided to do their own thing and are beginning to make their way down the bank. Their descent is far more graceful than mine and I will continue to leave them to their own devices. 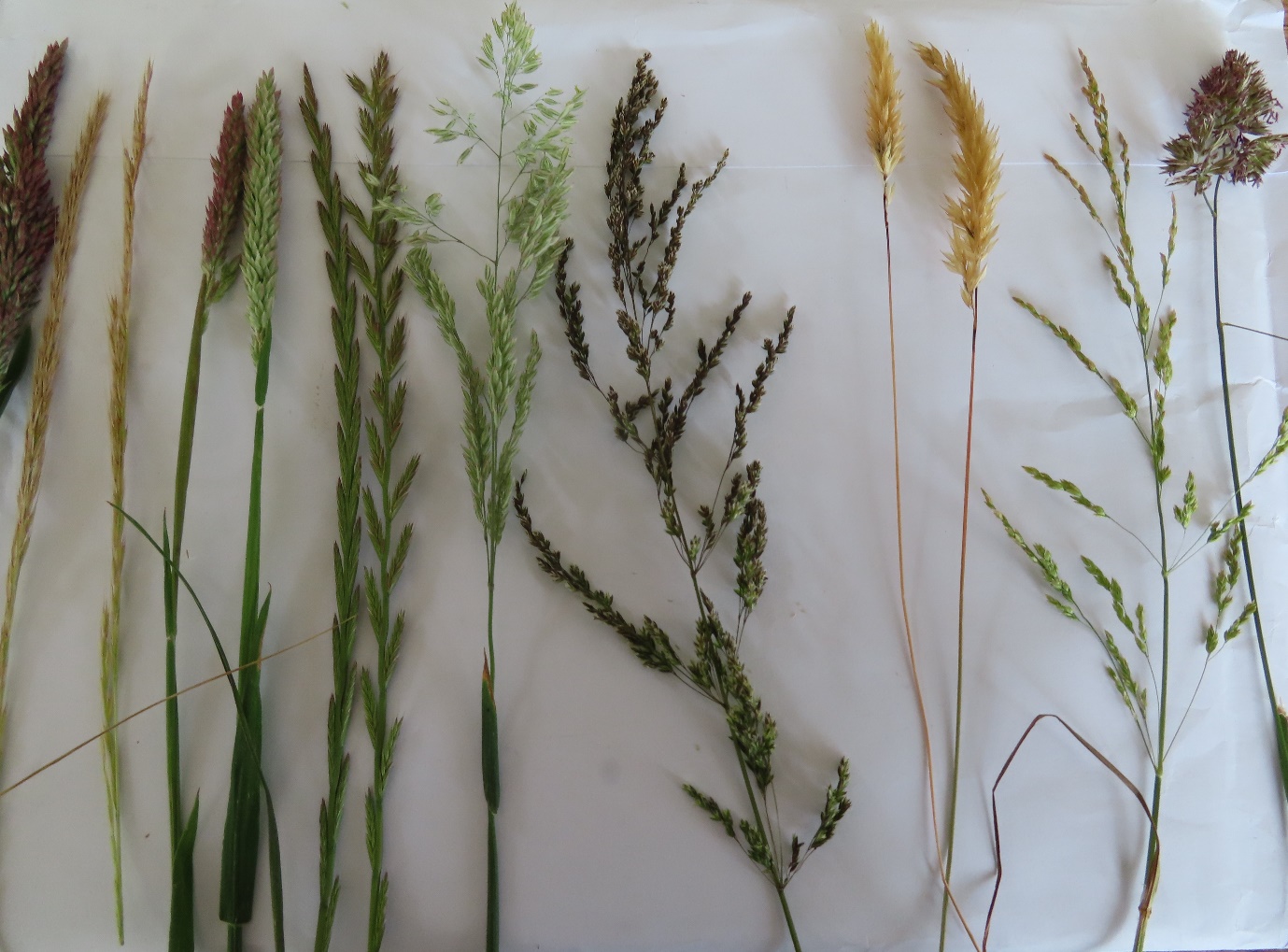 The bank is also home to many varieties of grasses. These are just a few and they are at their prime at the moment adding contrast to the wildflowers and roses gracing the area. 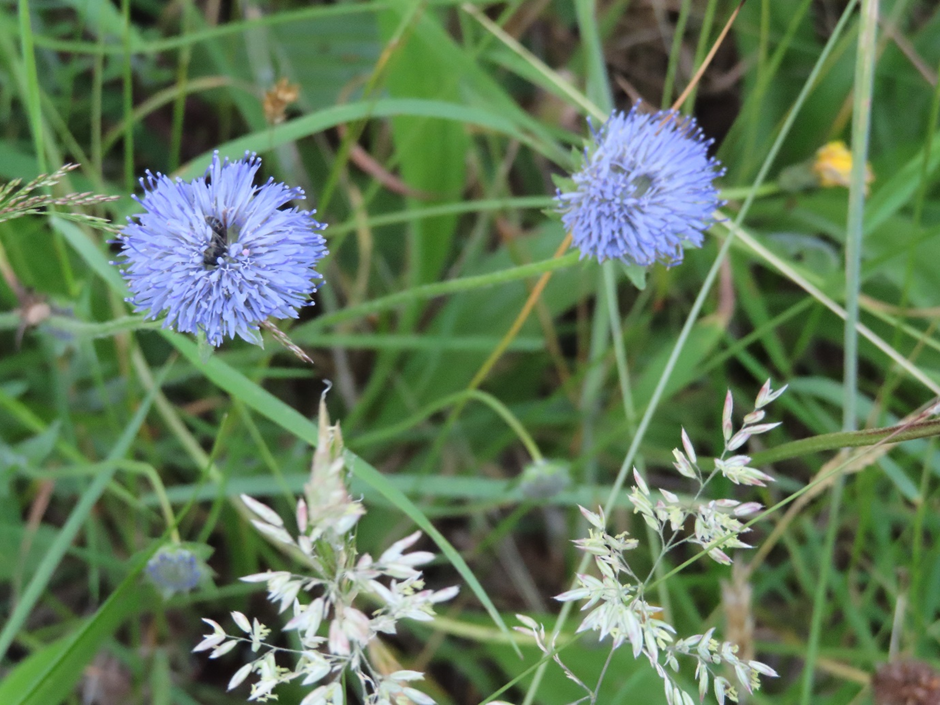 There is always a lull in the garden at this time of the year as the Camellias and rhododendrons fade and many of the other shrubs have yet to produce their colourful displays. The wildflowers fill the gap and they seem to be particularly abundant this year. Sheep’s-bit is part of the bellflower family and does particularly well on the dry steep bank. 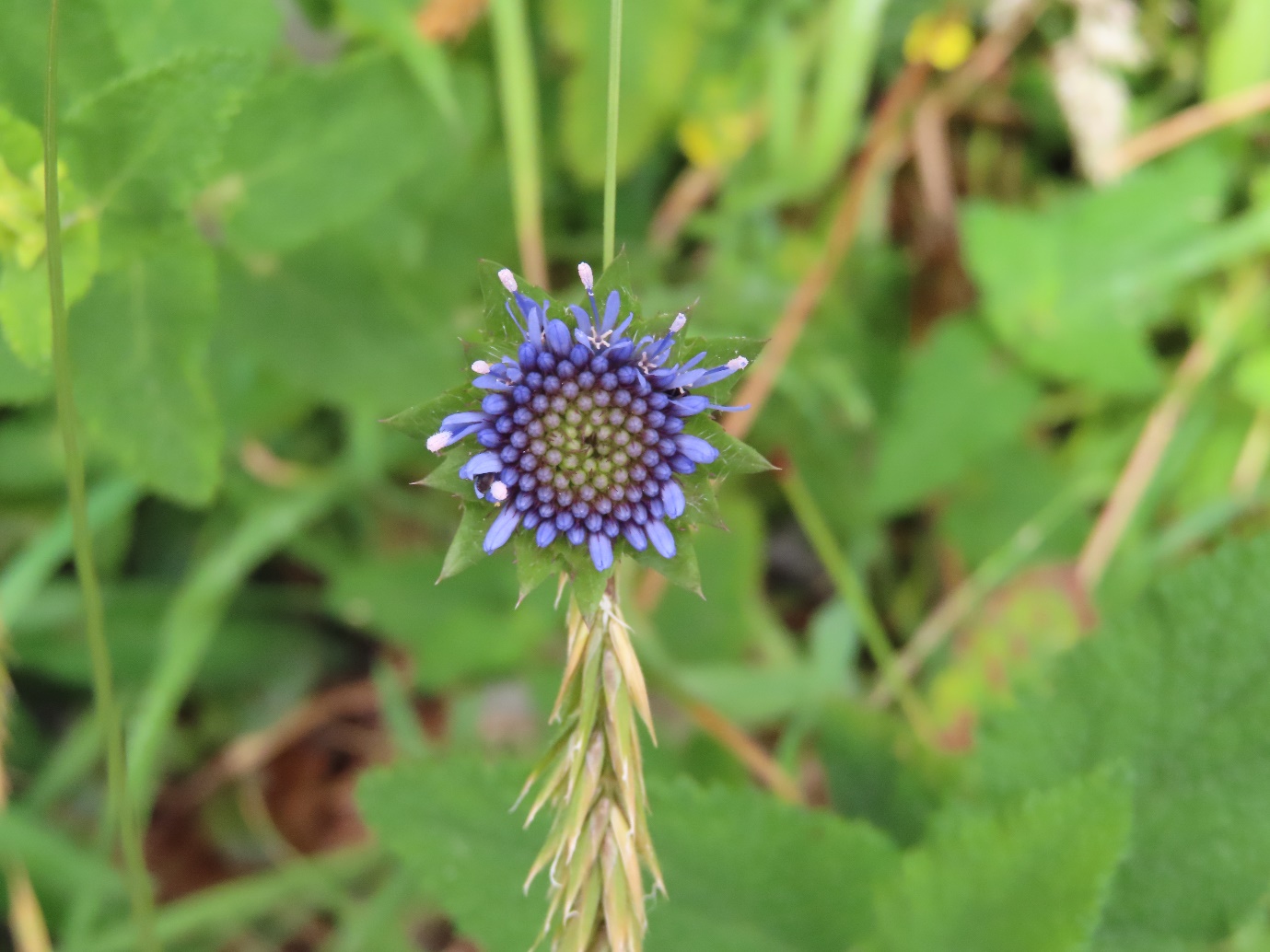 A young Sheep’s-bit before the petals are fully exposed. 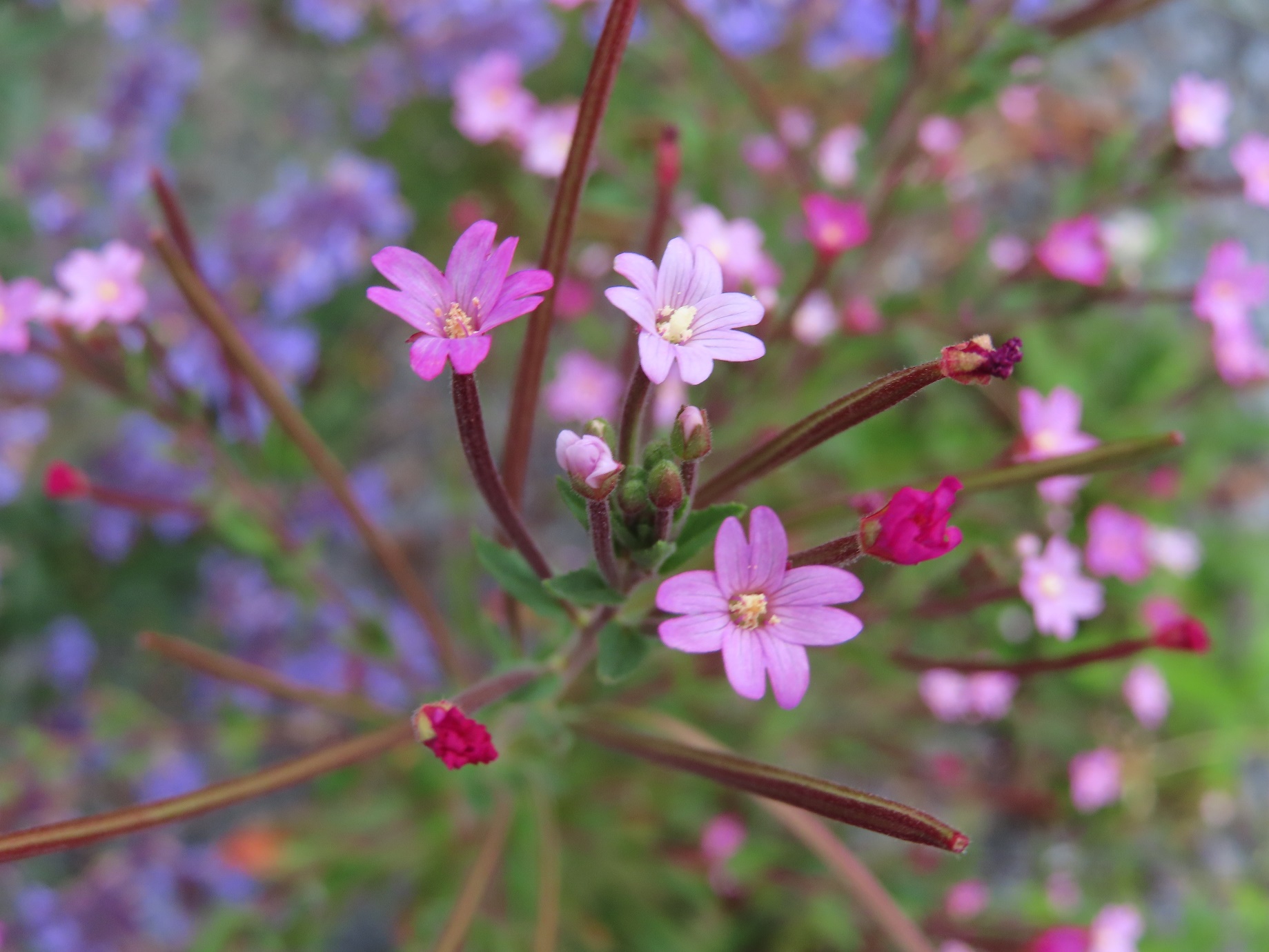 There are a number of different varieties of Willowherb in the garden but this pale Willowherb is the first to appear this year. It has a grace and delicacy that some of it’s relatives lack. 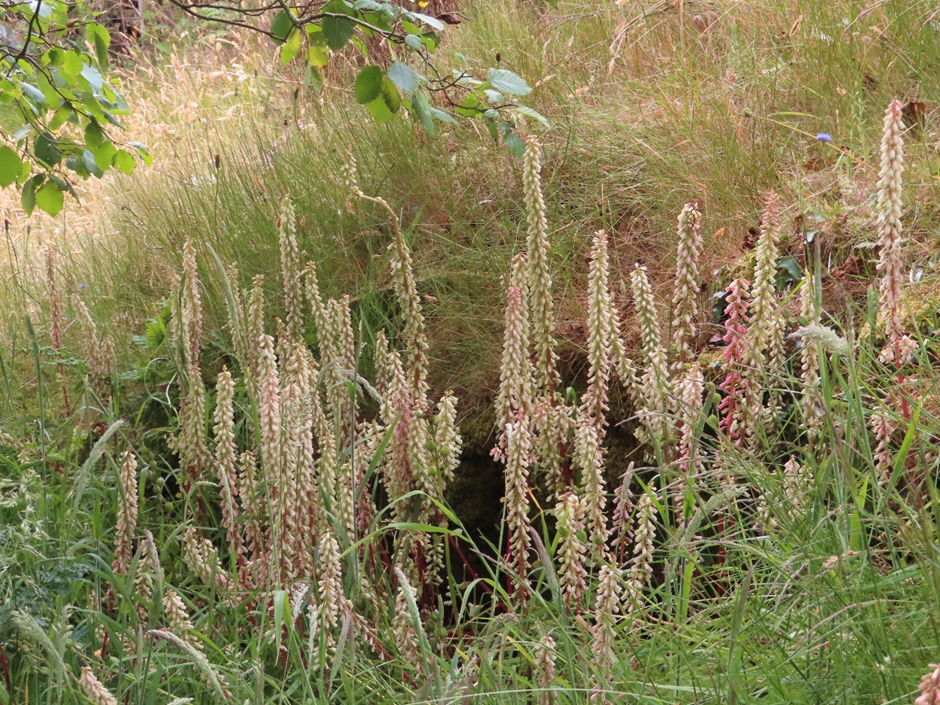 Navelwort takes on many forms in the garden as it grows in every conceivable location changing shape, size and colour as it does so. 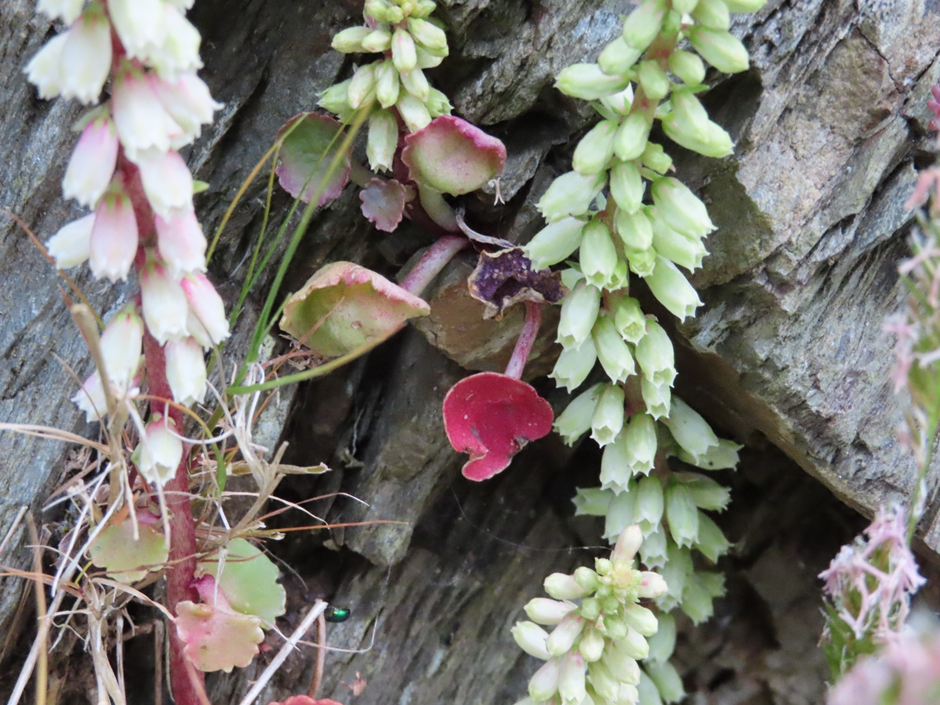 Navelwort managing to grow in the cracks of a rock face beside my garage. At first glance it is hard to believe that these two photographs are of the same plants. 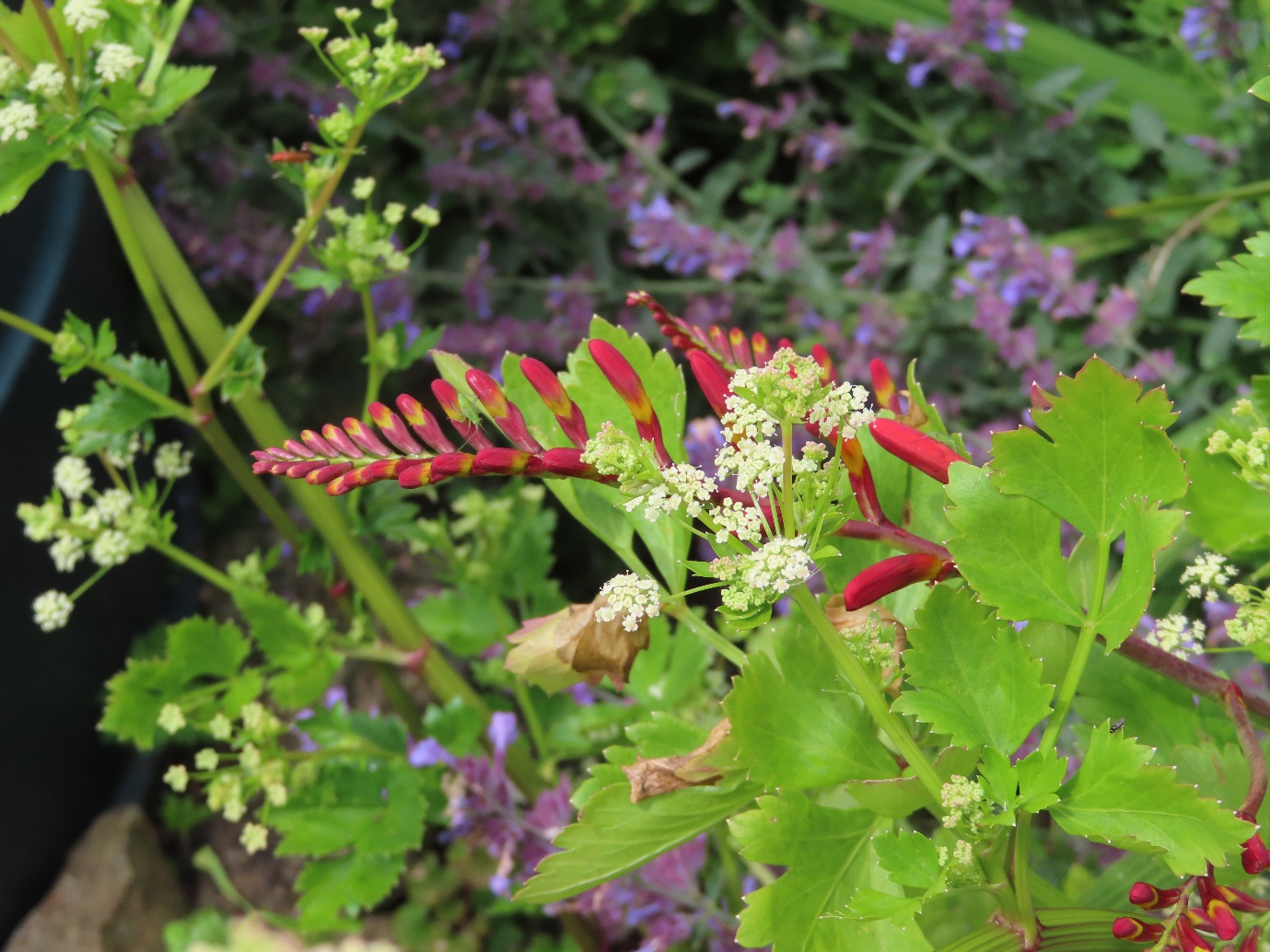 There may not be a lot of colours in the more cultivated part of the garden but this will change as the Crocosmia Lucifer flowers. Here it is seen with a parsley that has gone to flower and Catnip which I use extensively for contrast and as a pollinator for bees. 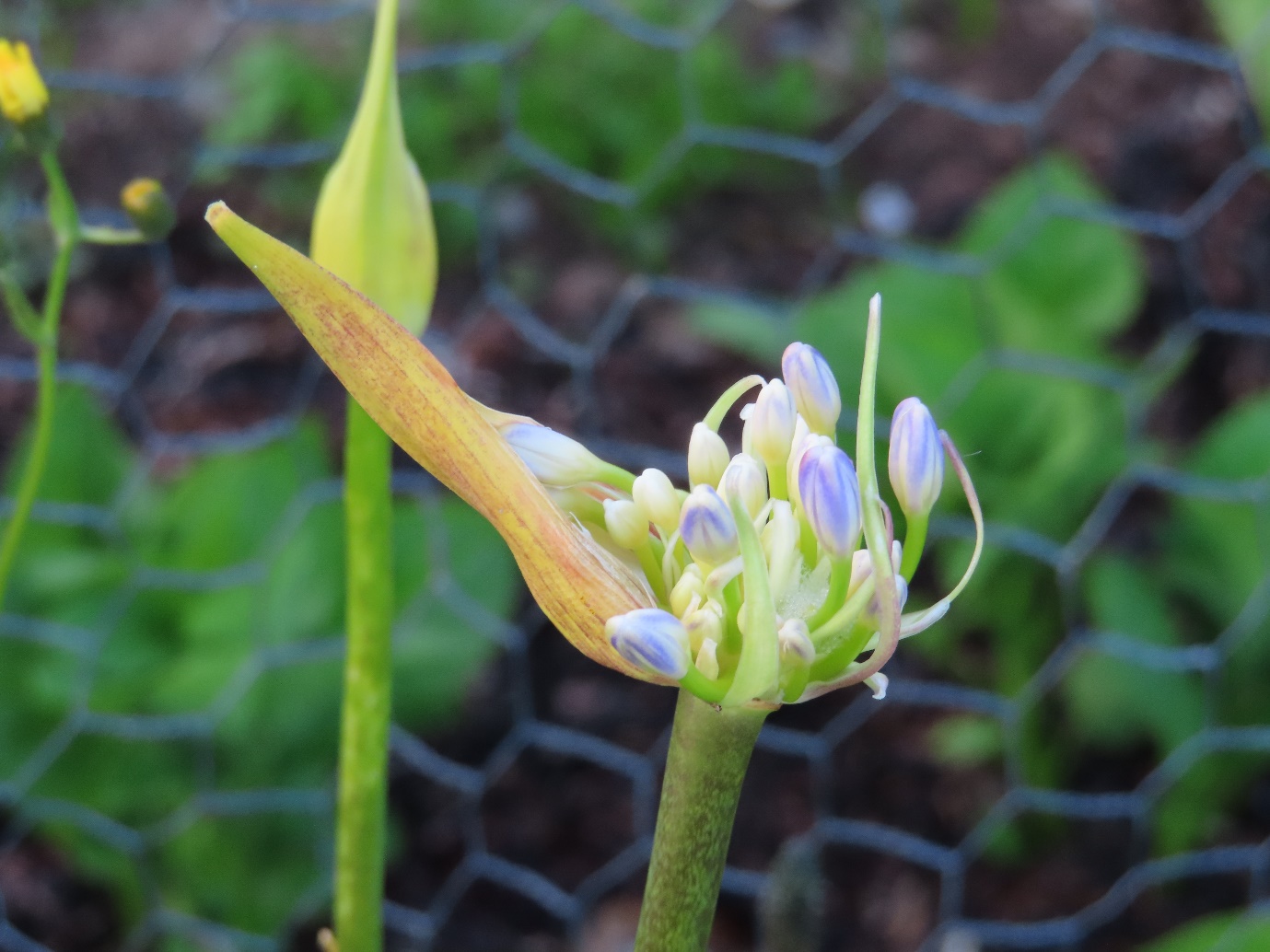 This agapanthus is also on the verge of flowering but in many ways, I find this stage more interesting. These plants seem to do better in pots throughout the garden than they do in borders and I am not sure why. 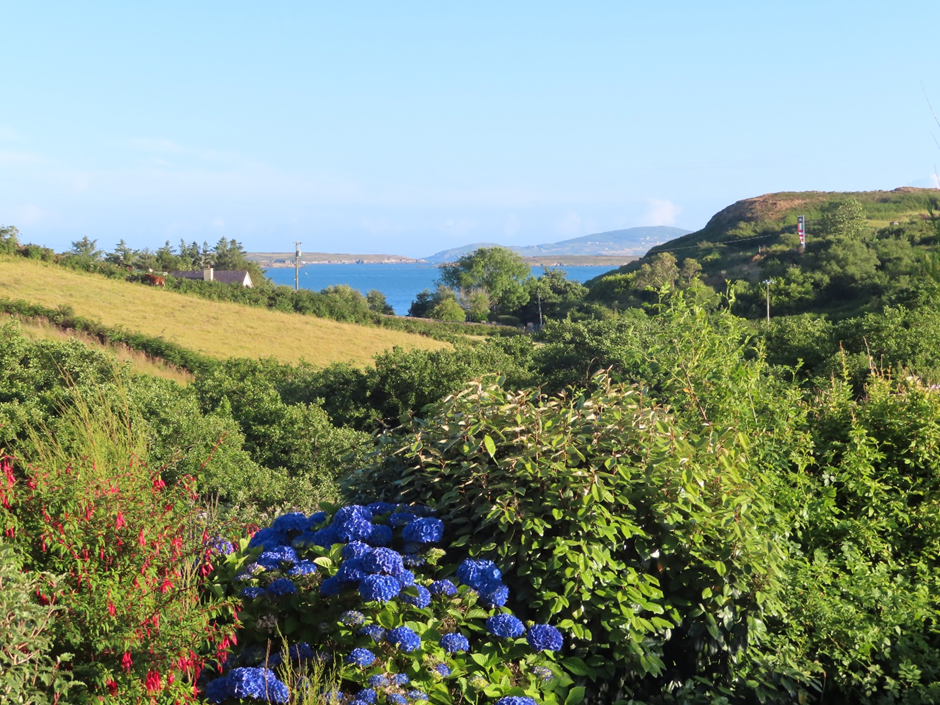 There are days when the bay near the house provides all the colour needed to lift your heart. This photograph is taken from my driveway. The blue Hydrangea has been grown from a cutting from one of the few shrubs that were in the garden when I arrived. It is also one of the first hydrangea to flower and is taste of the colourful display to come.