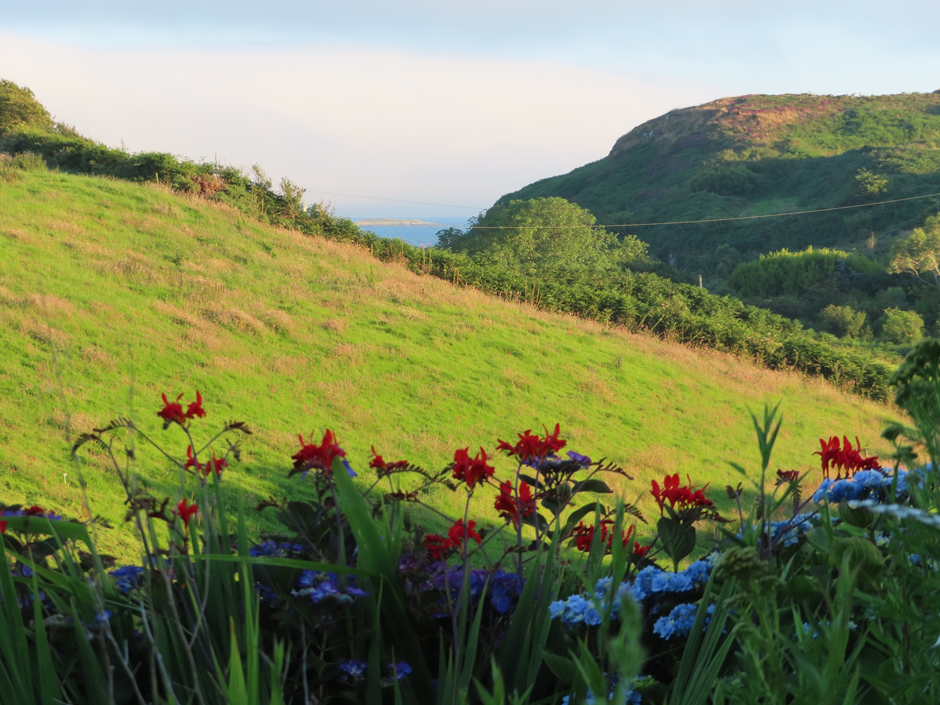 At twenty four degrees the weather today is slightly cooler, but I have given up any pretence of gardening. The dogs and I have taken to relaxing in carefully selected parts of the garden where there is both shade and a breeze. It is amazing to think that a month ago I would have given anything for a windless day. The only one with any energy is Sadie who has now extended her hunting to leaf-cutting bees. If not supervised she places herself with her nose to the wall of the house where a bee is making her nest in the hope of catching one on the way out. This is harassment on a grand scale and she is lucky that they rarely sting. I have curtailed her activities as leaf-cutting bees are considered to be one of the best pollinators so I am delighted that they have chosen my walls for accommodation. I am also pleased to see that the numbers have increased considerably this year so I expect my roses to be bald in the near future. 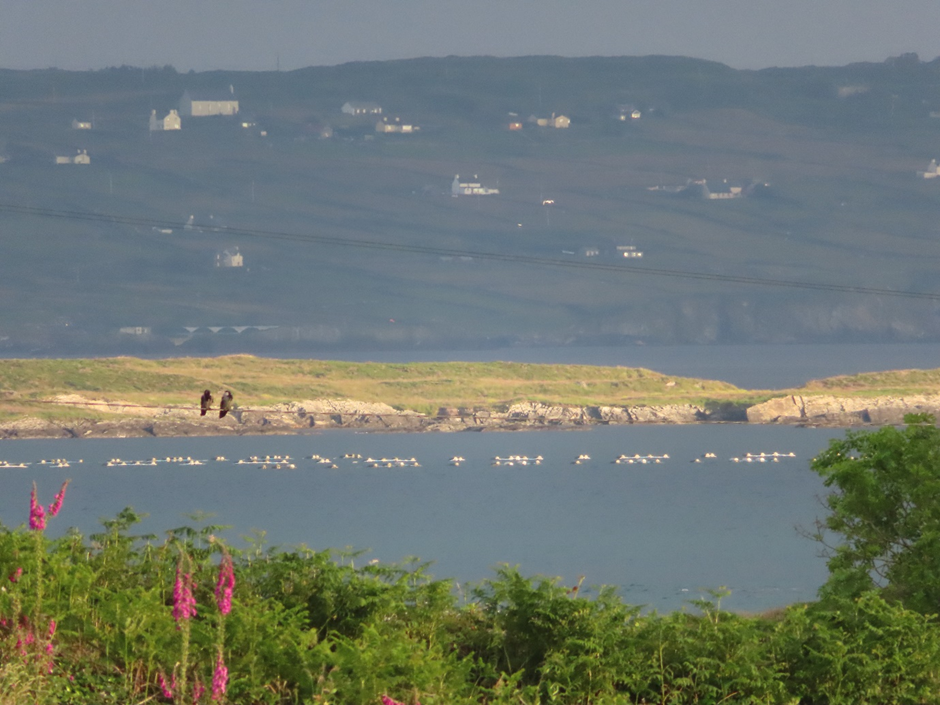 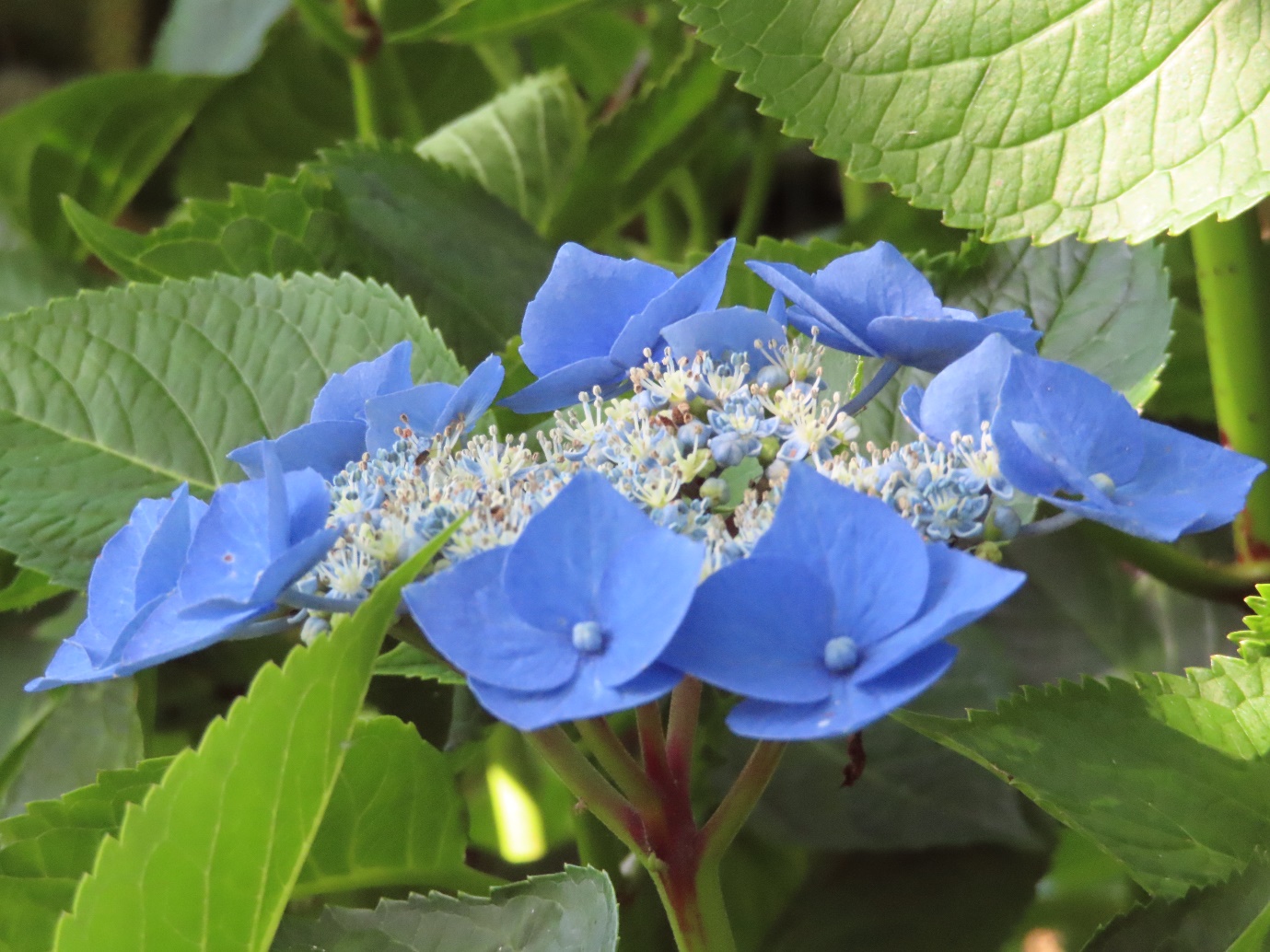 I have never been too keen on hydrangeas but was very impressed when I arrived here to find four growing at the front of the house and with no protection from the elements. I started to use them throughout the garden to provide both hedging and colour and have developed a great fondness for them. I am particularly impressed by their resilience. They can provide colour for months on end, are very easy to propagate from cuttings and give shelter to a multitude of creatures. The hedge of hydrangea that I have planted in front of the house is particularly popular with wrens who use them to move across the front garden with impunity. 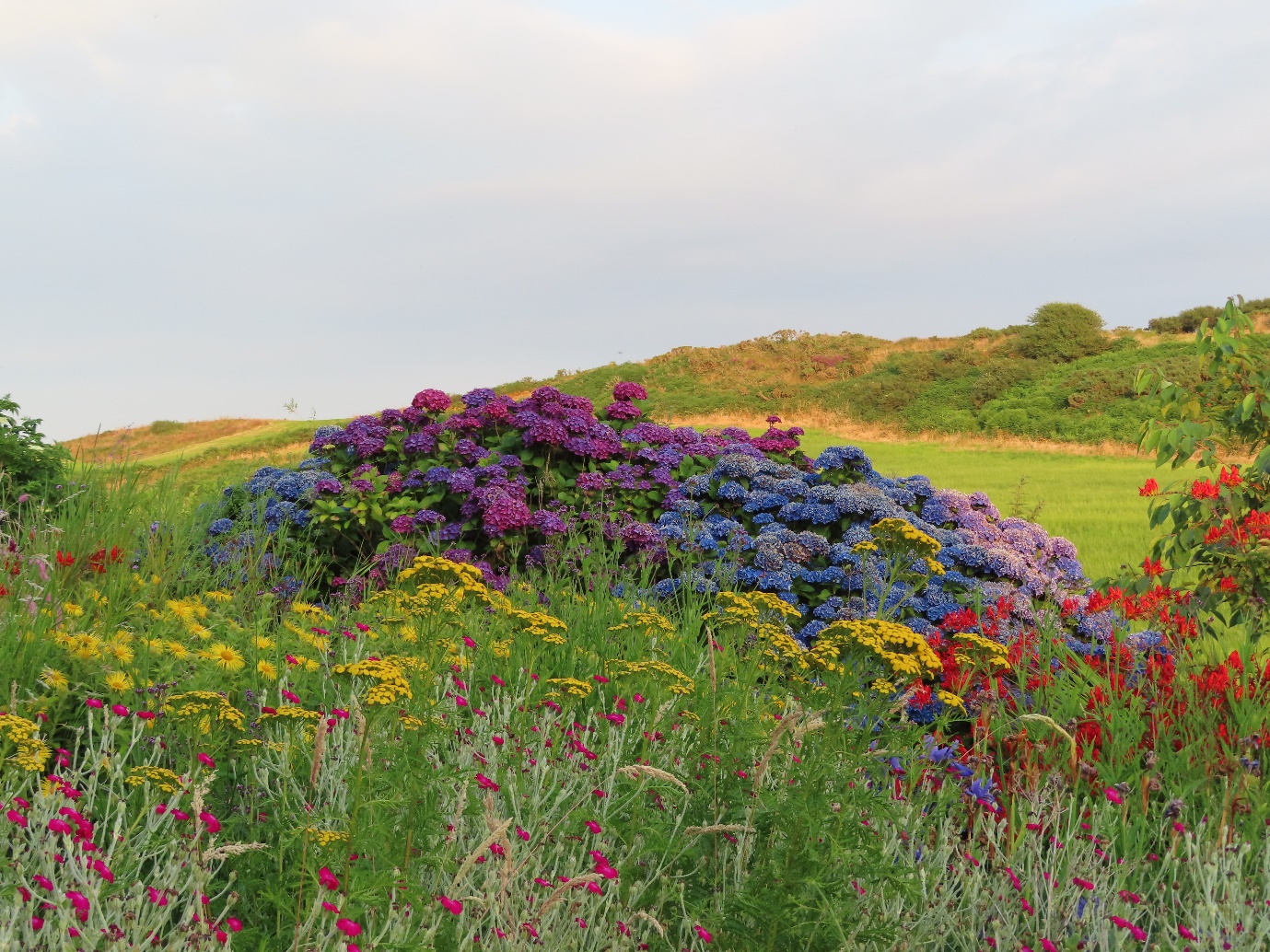 Three of the original hydrangeas now protecting a small herbaceous garden in front of the house.

One of the most fascinating characteristics of hydrangeas is their capacity to change colour on a continuous basis. Not only is this influenced by the acidity level of the soil but many change colour dramatically from the first blossoming to their demise in the late autumn. The hydrangea below is one such example. 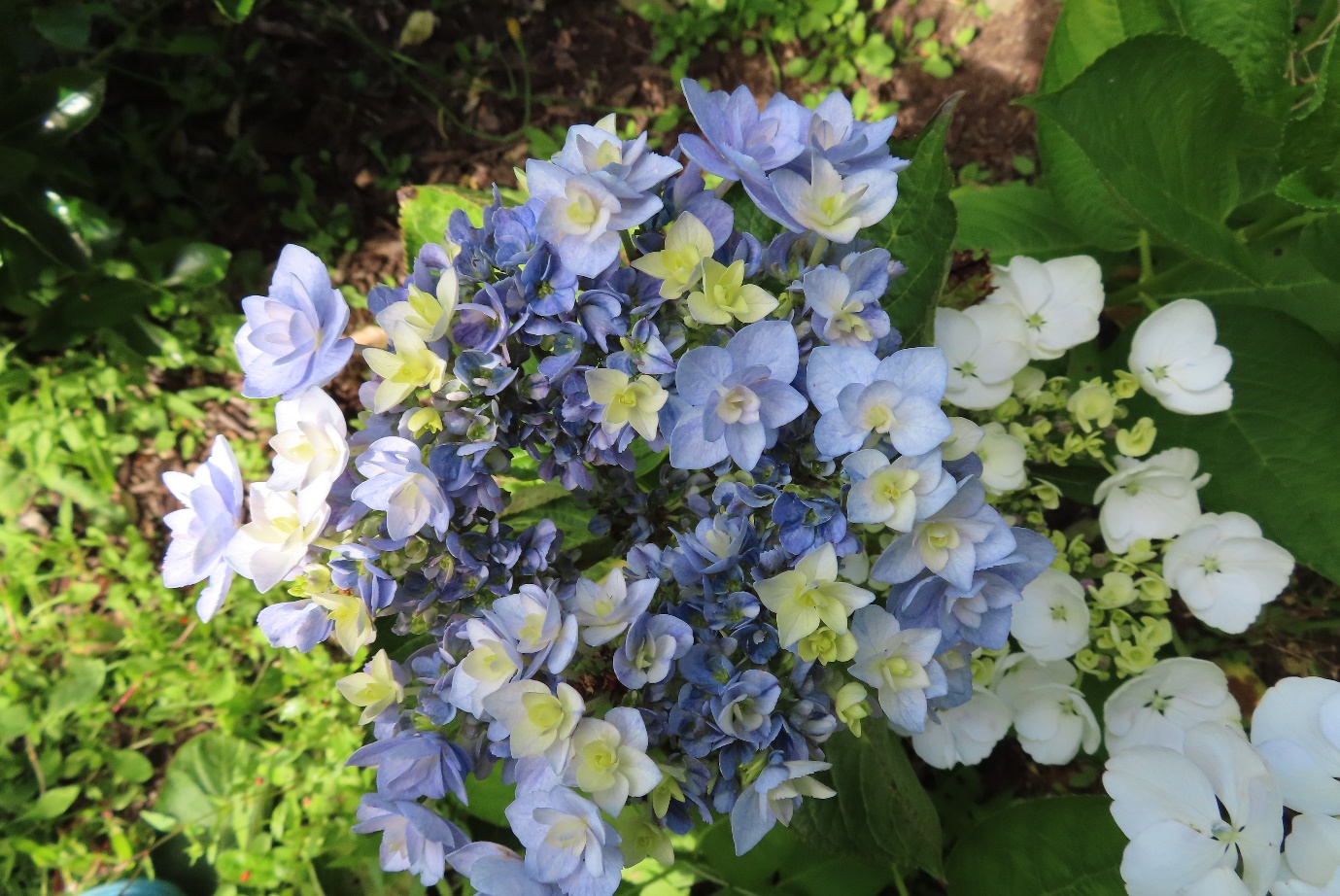 This is one of my favourite hydrangeas. It starts out a pale lemon and moves through various shades of blue to pink and finally turns a deep wine in autumn. I have no idea what it is as it ‘appeared’ in my garden. I have no memory or record of buying it and it has not been on sale in any of the local nurseries. The only explanation so far is that it came with a ‘batch’ of hydrangeas that I was using for a hedge. I have found an illustration of a true wild Japanese hydrangea macrophylla ‘Izu no Hana’ which looks similar but then West Cork is a long way from Japan so who knows? 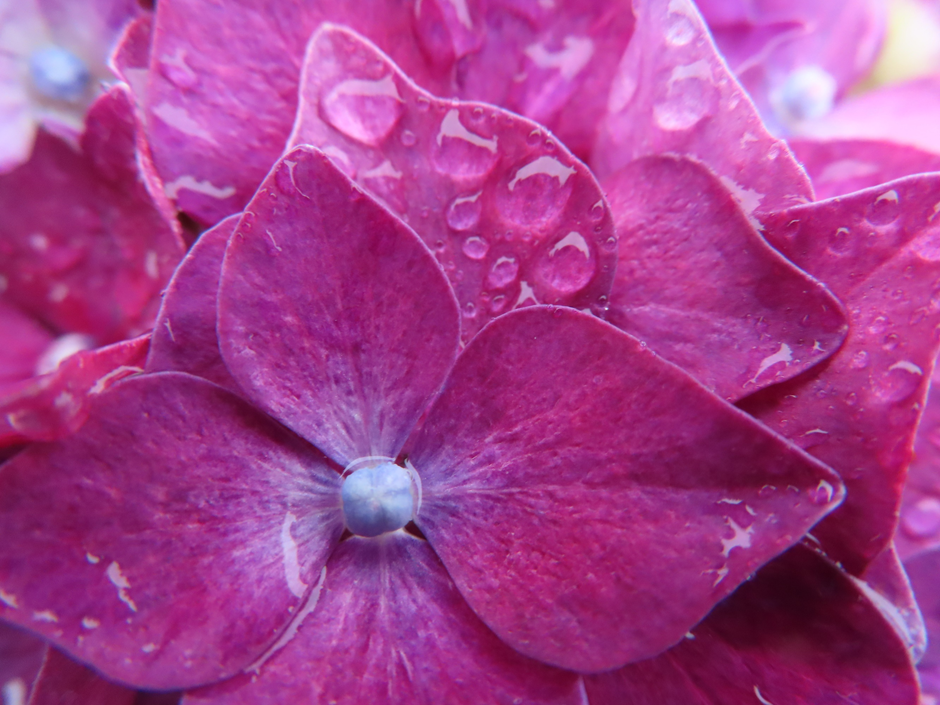 Details of one of the original pink hydrangea 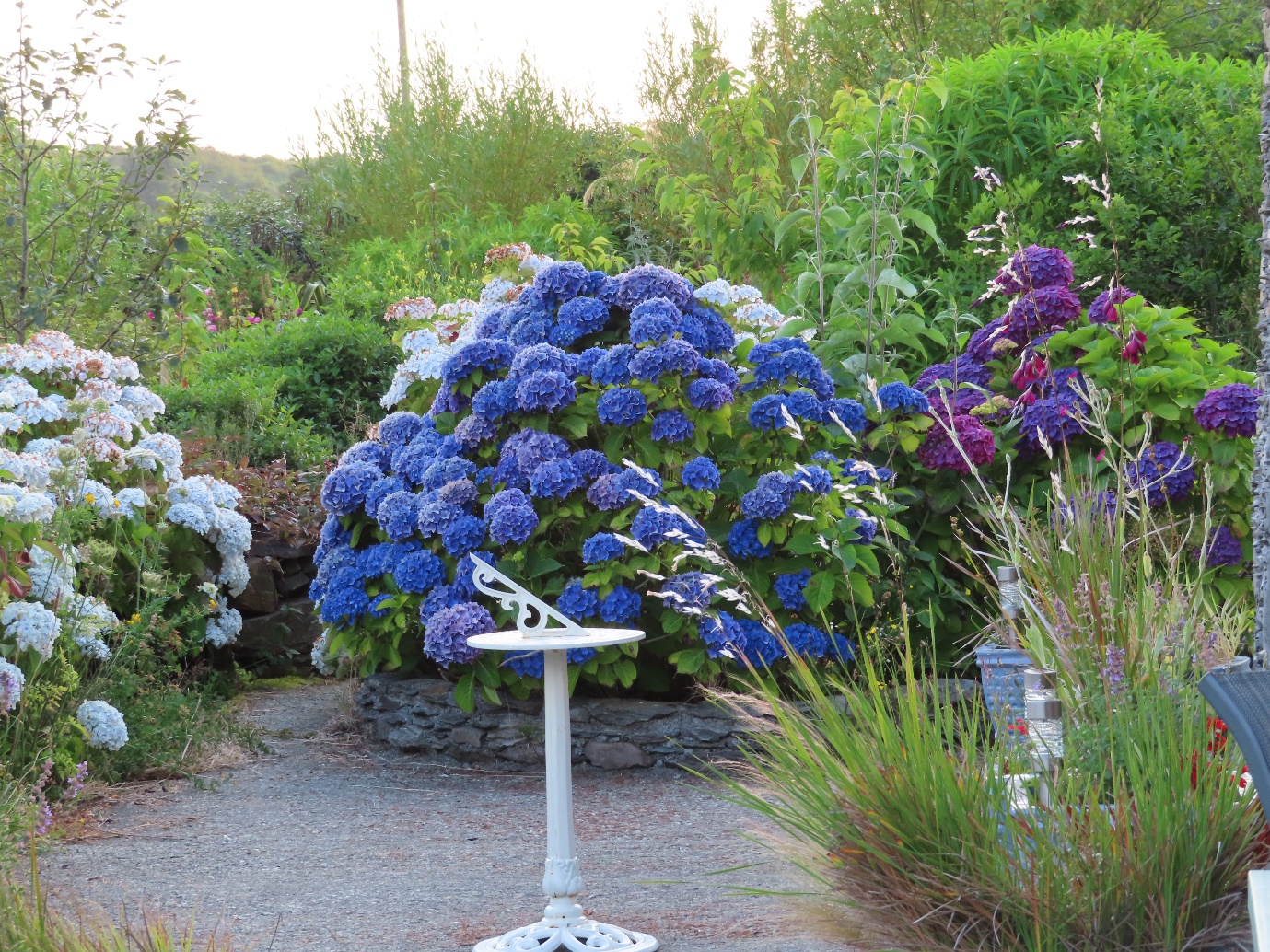 All of these hydrangea have been grown from cuttings from the original four plants. The white is Madame Emille Moulier 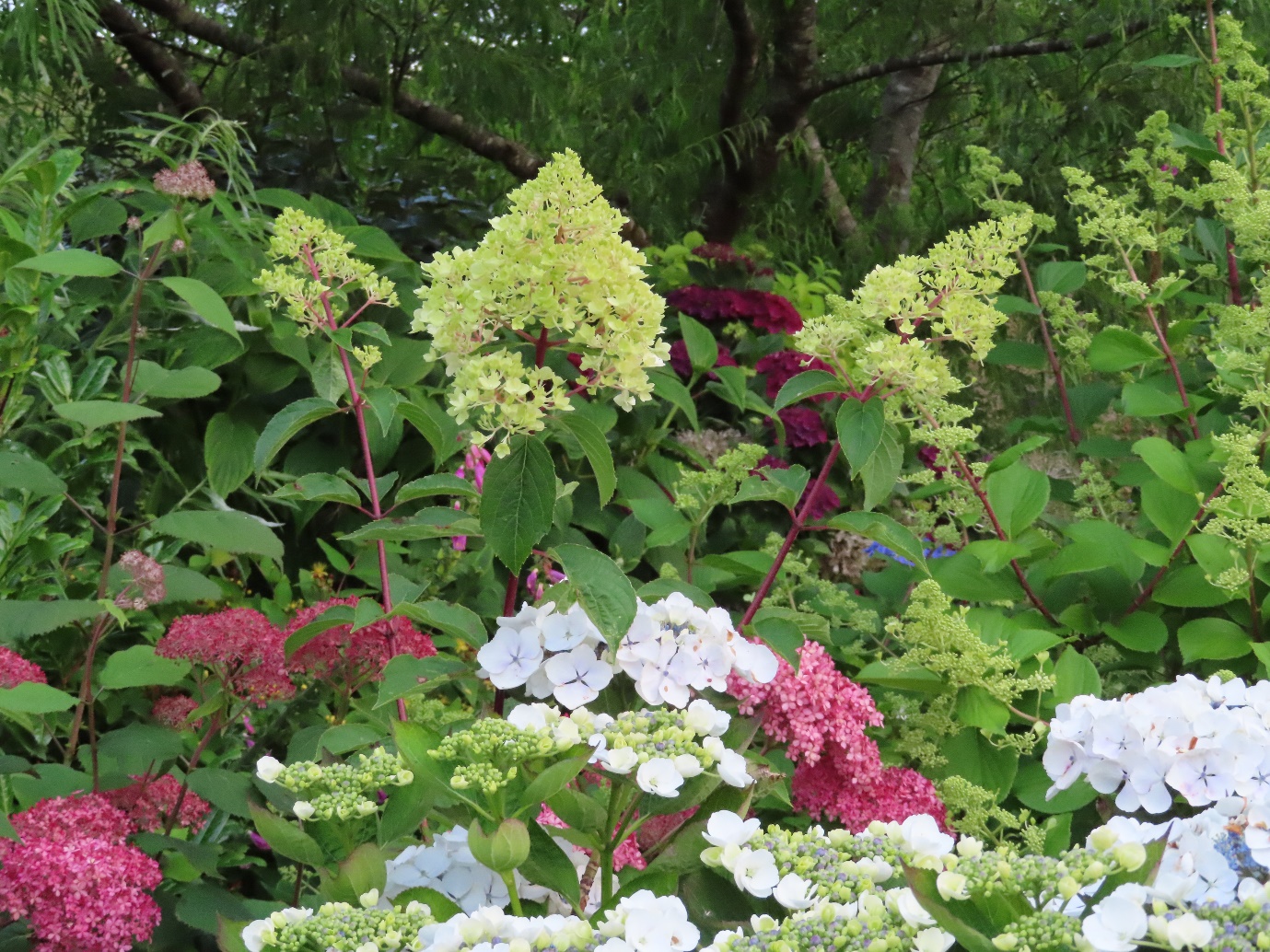 A cluster of beautiful mixed hydrangea thriving in the willow garden 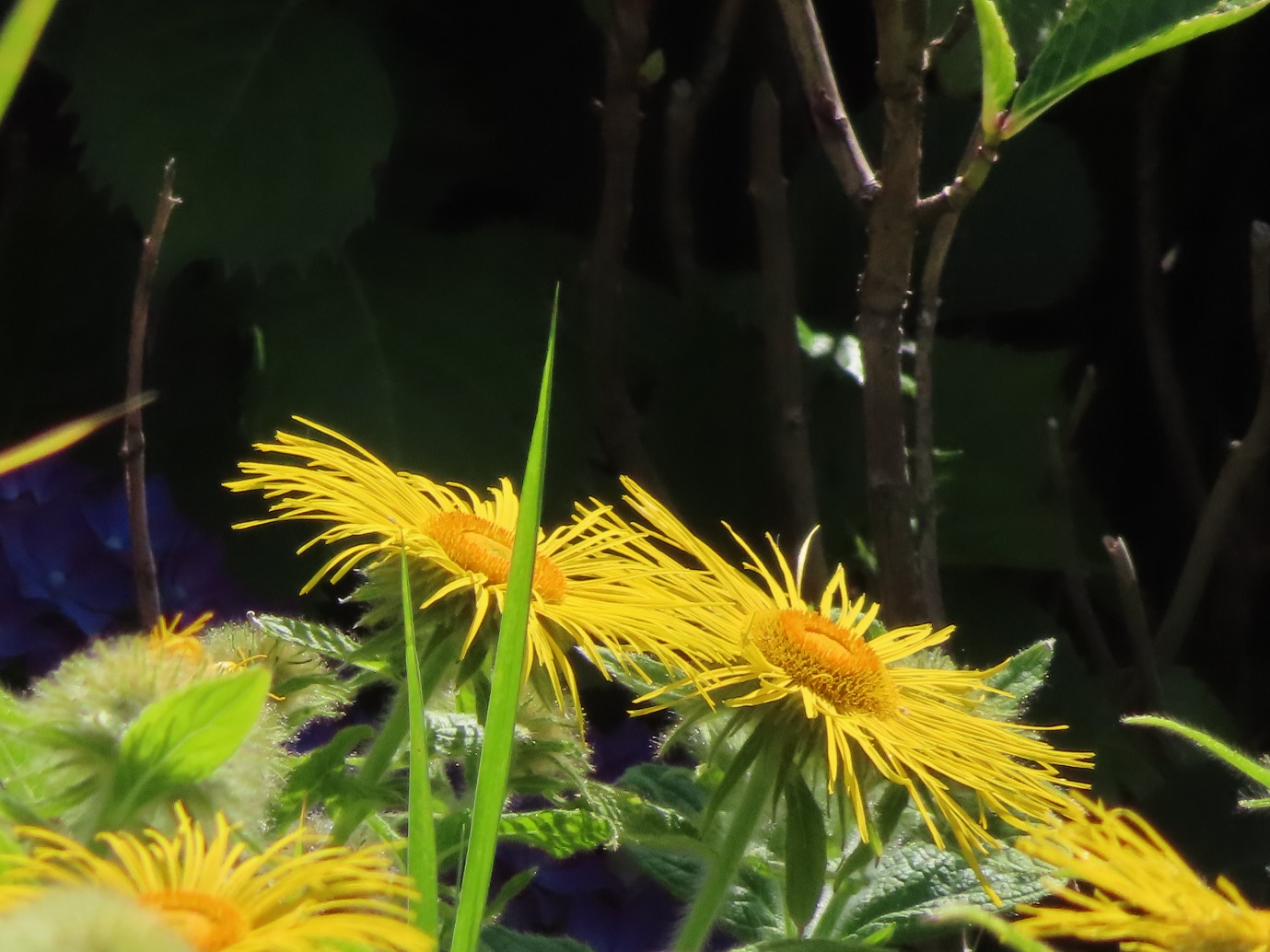 I have been concerned about the lack of butterflies this year and now realise that it is just a few varieties that are absent. Painted ladies and peacock butterflies love the Inula hookeri (above) as well as buddleia but have yet to be seen. However, as I walk down the drive each day for my cooling off swim I have noticed that the long grasses are harbouring a multitude of brown butterflies. Sadly they are usually too quick for me to make a positive identification especially one that will fulfil the requirements of the National Diversity database – ‘lots of brownish and white butterflies’ does not quiet cut it – so I continue the futile task of getting a picture perfect photograph. All I need now is for one to settle somewhere for more than a second. 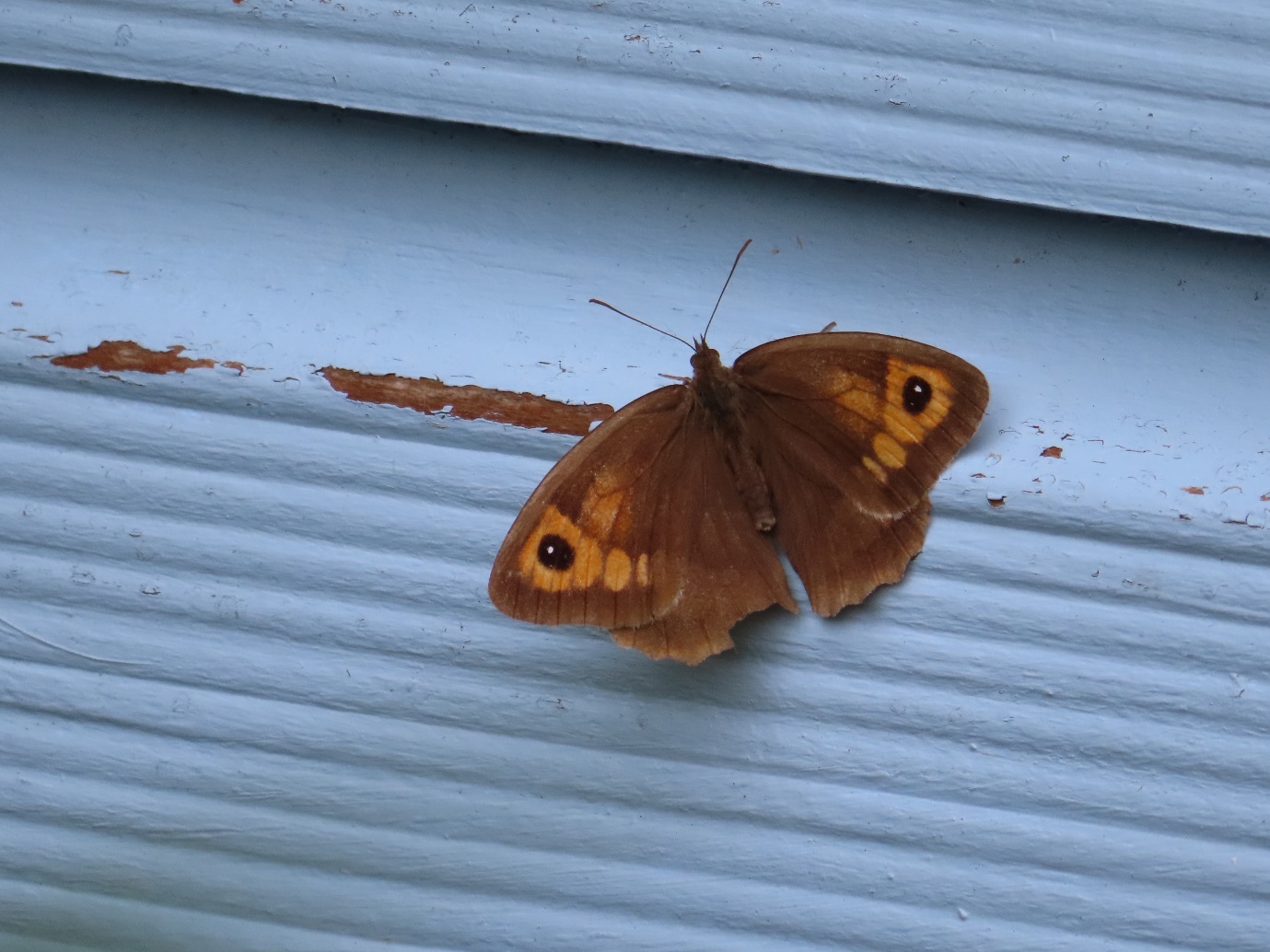 Almost on cue this Meadow Brown settled on the shed and gave me ample time to take a photograph. It could not have picked a better backdrop 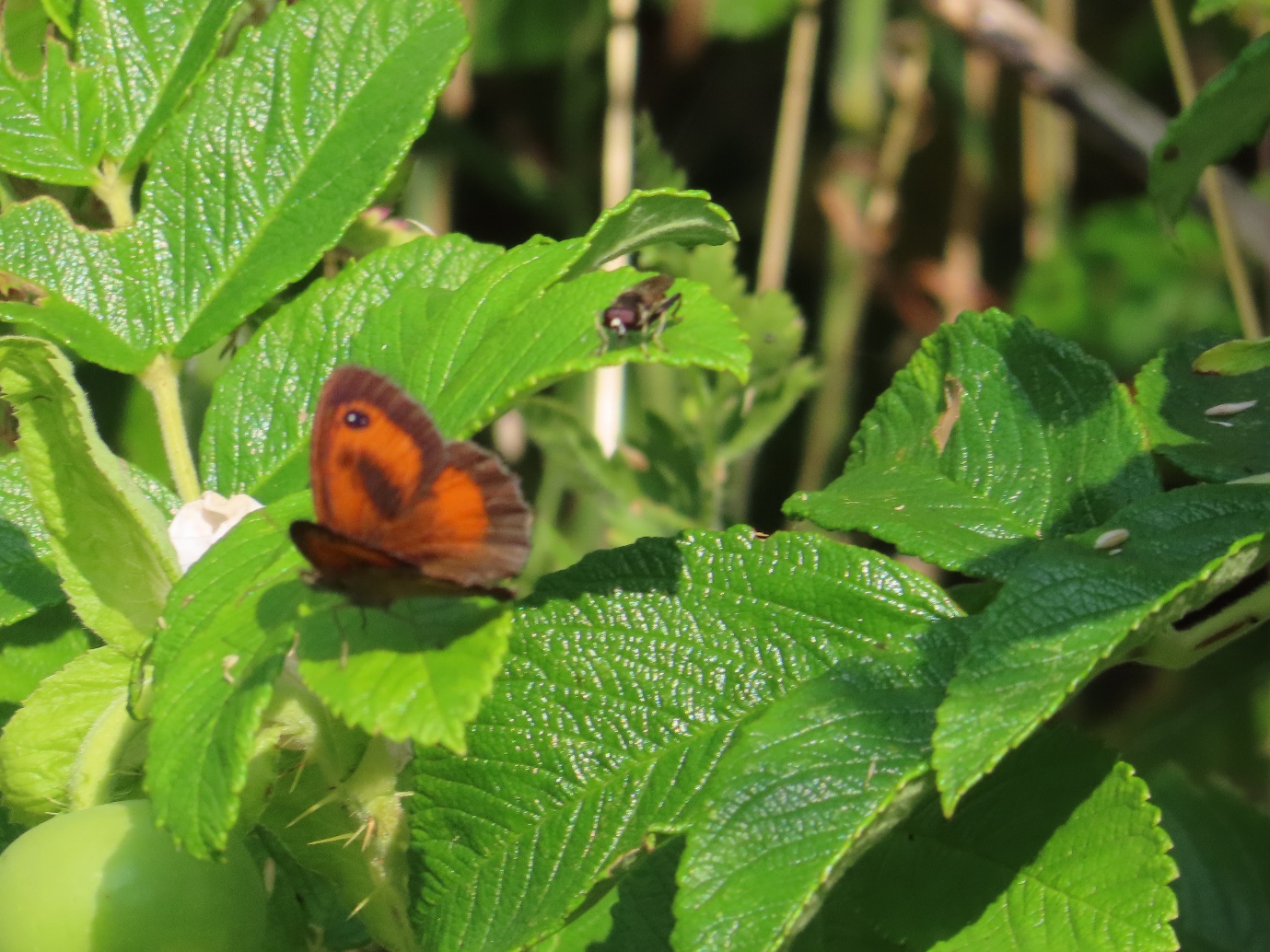 I have now discovered that Gatekeeper butterflies thrive in the long grasses in the garden and my uncut field. I have counted seven in one tiny patch. This is another good reason for not cutting the grass 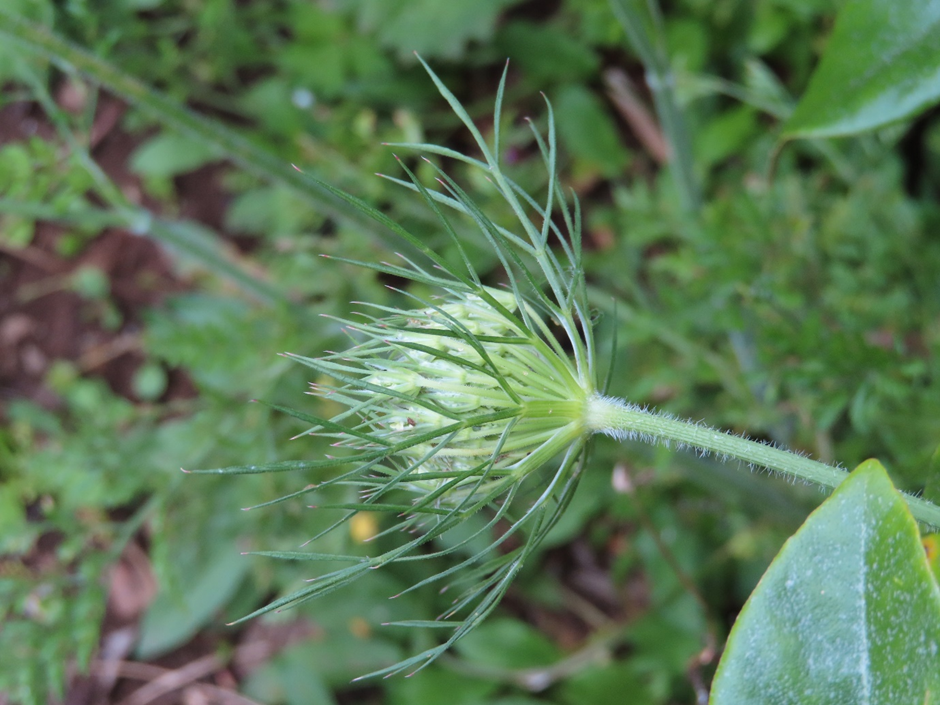 Some of the wild flowers make changes throughout their short life that are as dramatic as the hydrangea. The above photograph is of a Wild Carrot as it starts to come into bud. The next photograph shows it as it begins to flower. The young blossom is usually pink in the first instance changing to a pure white. This is usually when you will find an abundance of soldier ants – mating of course. In its final metamorphosis the wild carrot closely resembles a bird’s nest and usually provides food for shield bugs. 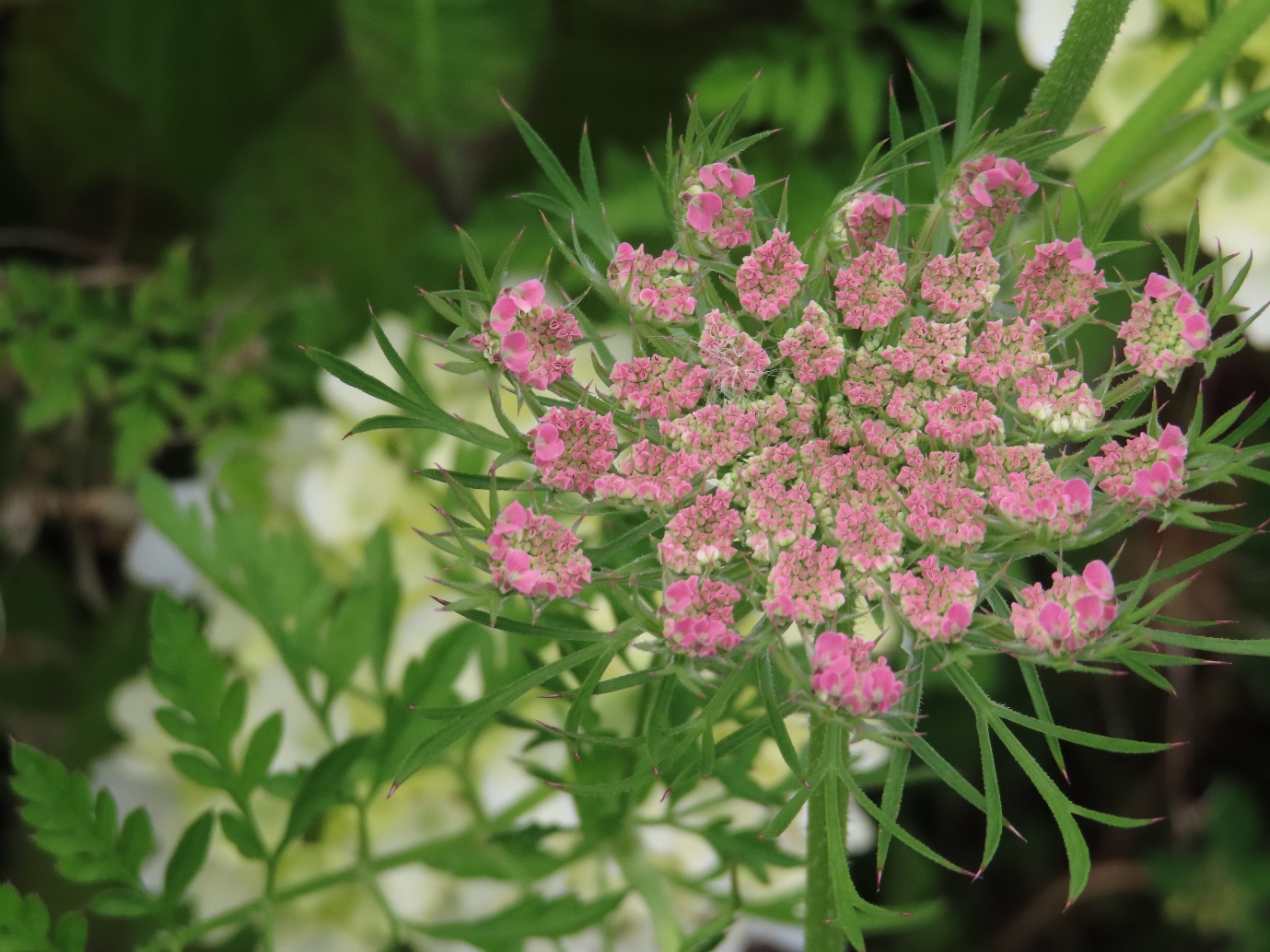 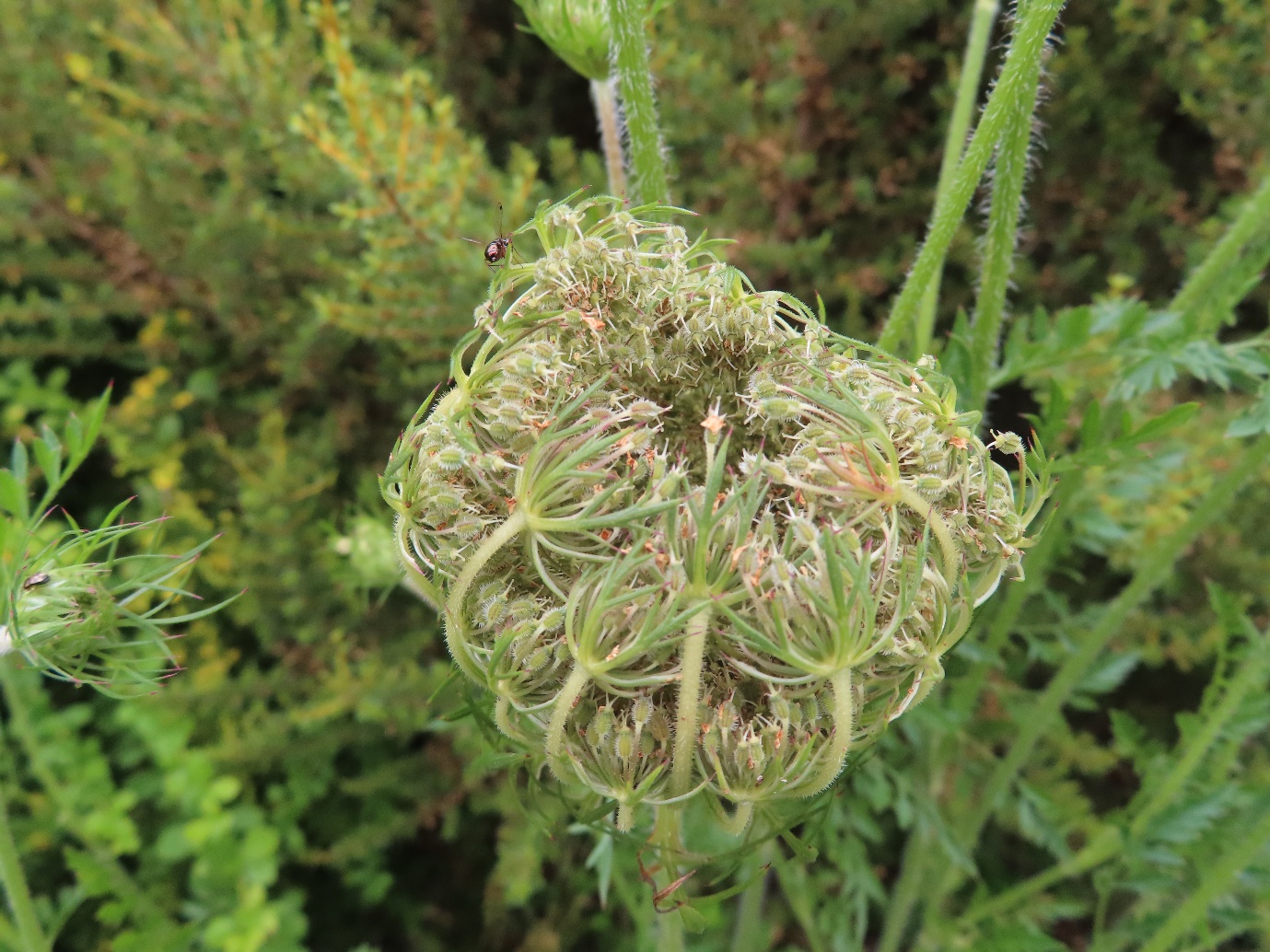 The bird’s nest seed-head of the Wild Carrot 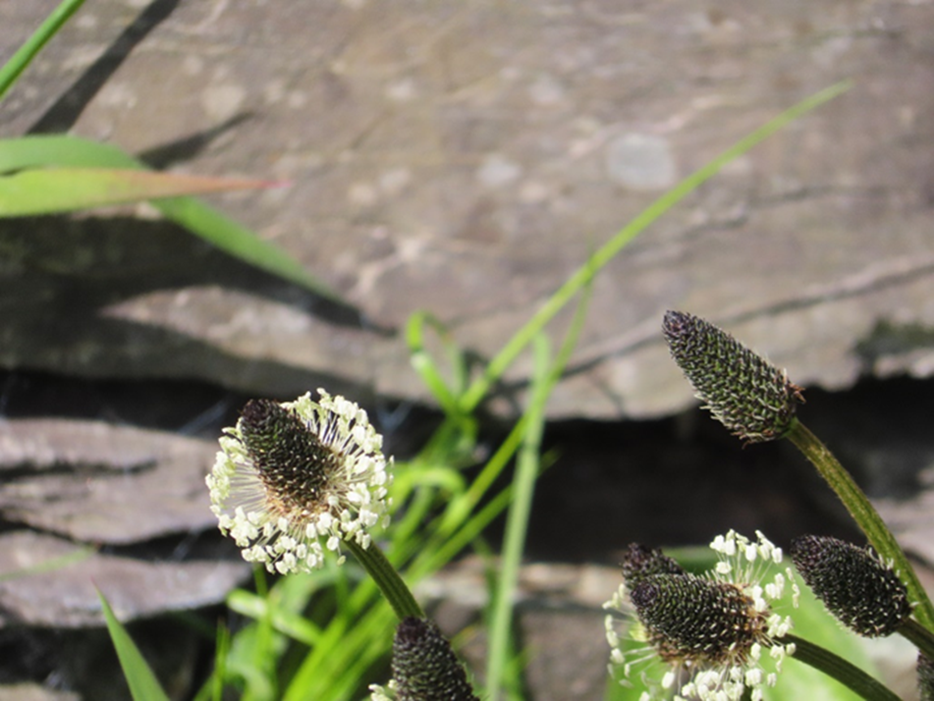 I have always liked Ribwort Plantain and usually see it as a dignified, architectural plant. I have never paid much attention to it after its initial flowering. Now that I have, I can see that it too makes major changes to its appearance during its short lifespan. In fact, I think that it most closely resembles someone who has just seen a horror movie with a bad end. 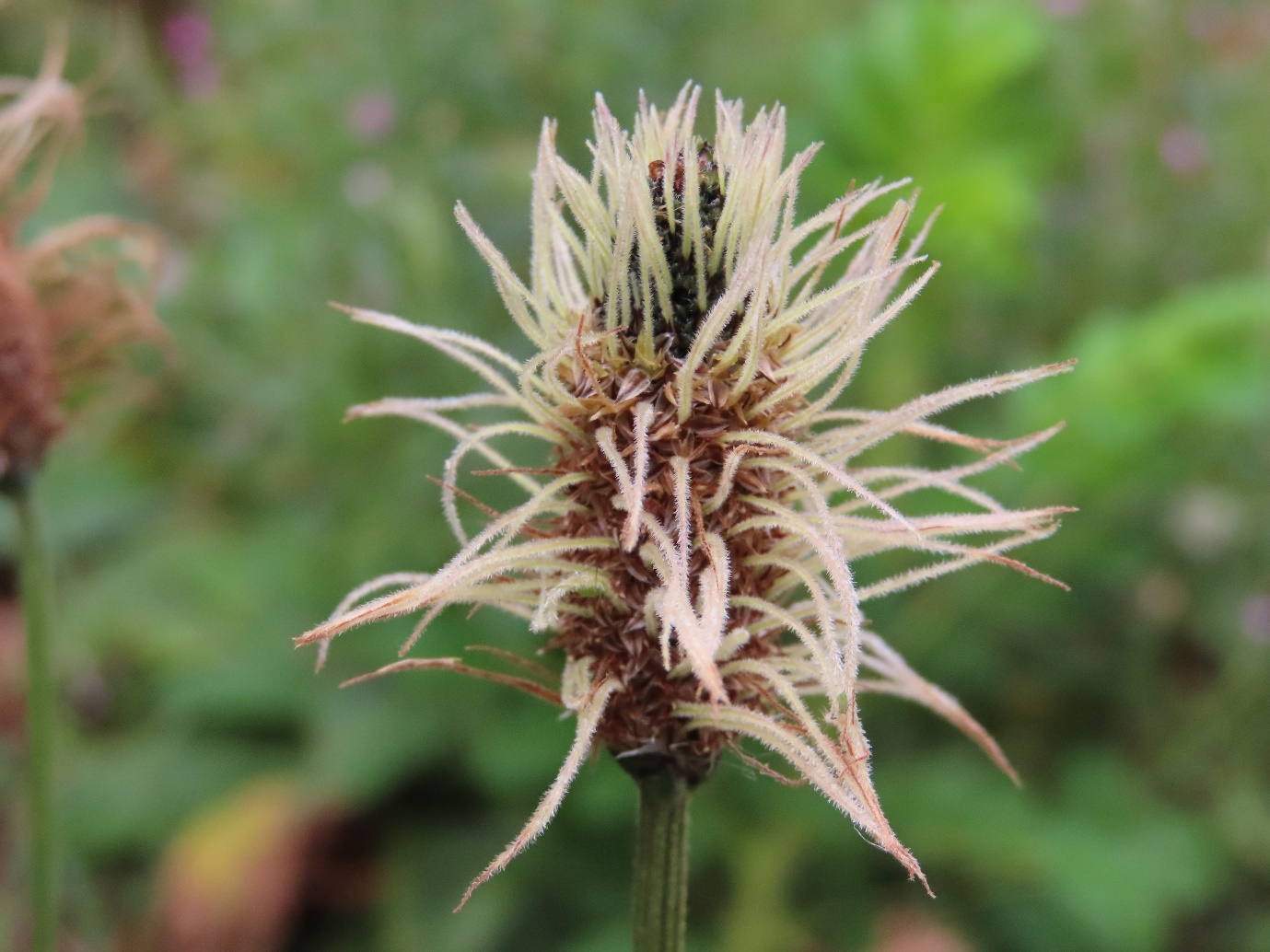 One of the most beautiful sounds is that of water filling up my almost empty water butts. After weeks of scorching heat, we are finally getting the rain that the plants so badly need. All I need is to see some Peacock butterflies to make my day.