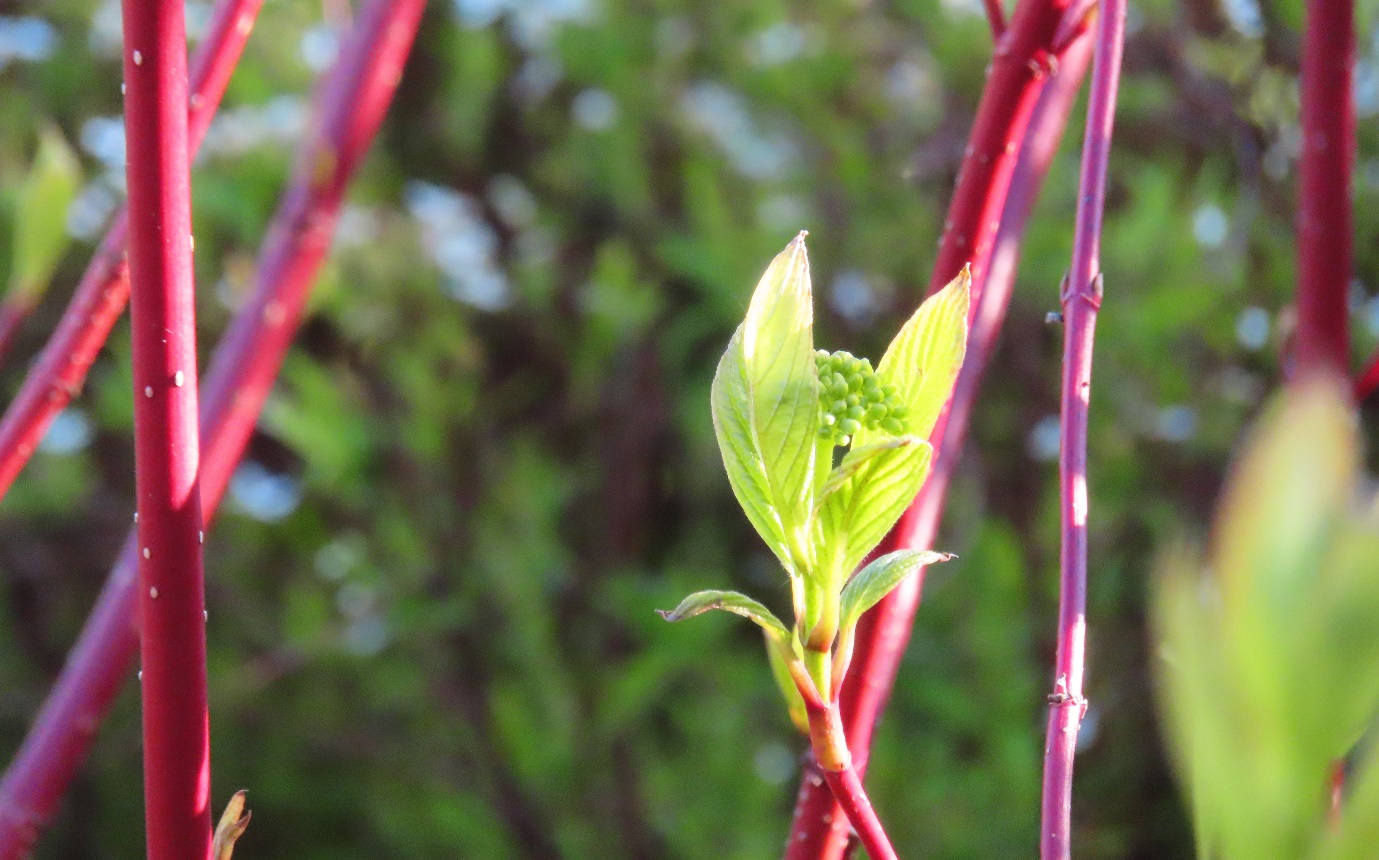 At last, the rain has stopped and the sun is out. The temperature has jumped ten degrees in a day and the rosemary is flowering again after a short rest. The bumble bees are feeding from the berberis and rosemary and I spotted a rather tattered peacock butterfly making a fleeting appearance. There are signs of life everywhere, evidence that my worst fears did not come to pass: the garden is still alive something that I have been doubting for the last few weeks. At night the foxes are out looking for mates. Their call is eerie enough but when it is accompanied by two barking and one howling dog it sounds like a scary movie on steroids. At least it livens up the evenings although I would prefer if they restricted their screeching to sociable hours. 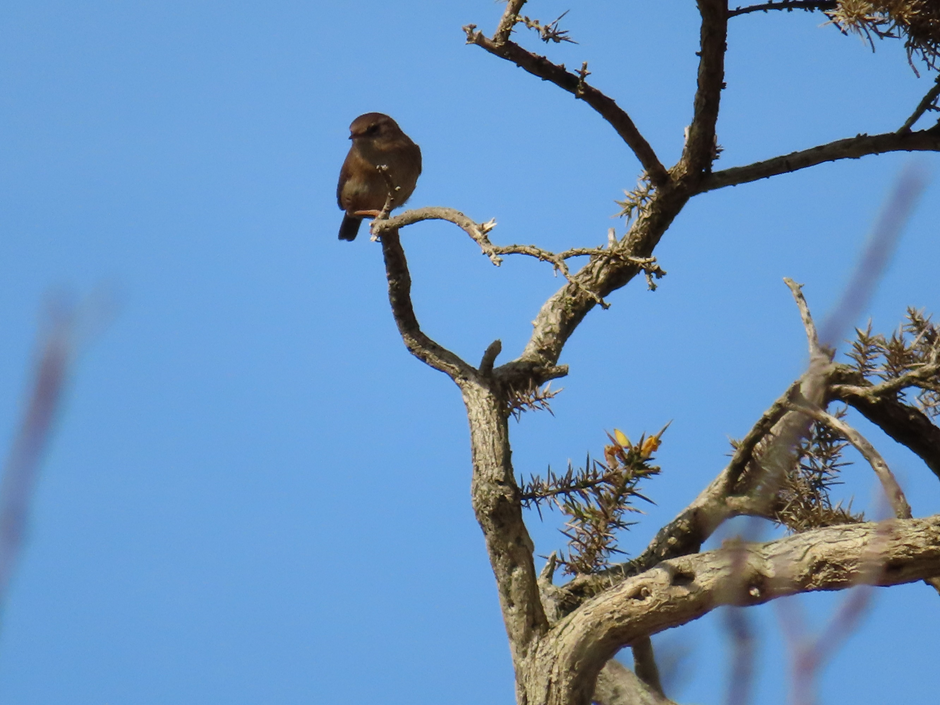 The birds are no longer racing me to the bird tables each morning and are eating less food. The robins seem to have totally gone to ground. I wonder if this is due to the fact that the birds are up and ready to eat at daylight whereas I am resisting feeding them until I get up at a respectable hour. I have been reliably told that the chatter that greets me as I go about the garden is a warning to other birds (and possibly myself) to keep to their own territory. I prefer my view which is that the birds are all thanking me for a winter of good food and superior lard. The wrens are particularly vocal this week although they have kept very quiet all winter. They love the group of hydrangea that grow in front of the house as it allows them to travel under cover. They are almost completely invisible as they flit from bush to bush. If the good weather continues, I plan to tail off the feeding so that the birds don’t become too dependant on me. Having said that it is still cool enough and there is a chill wind most days. 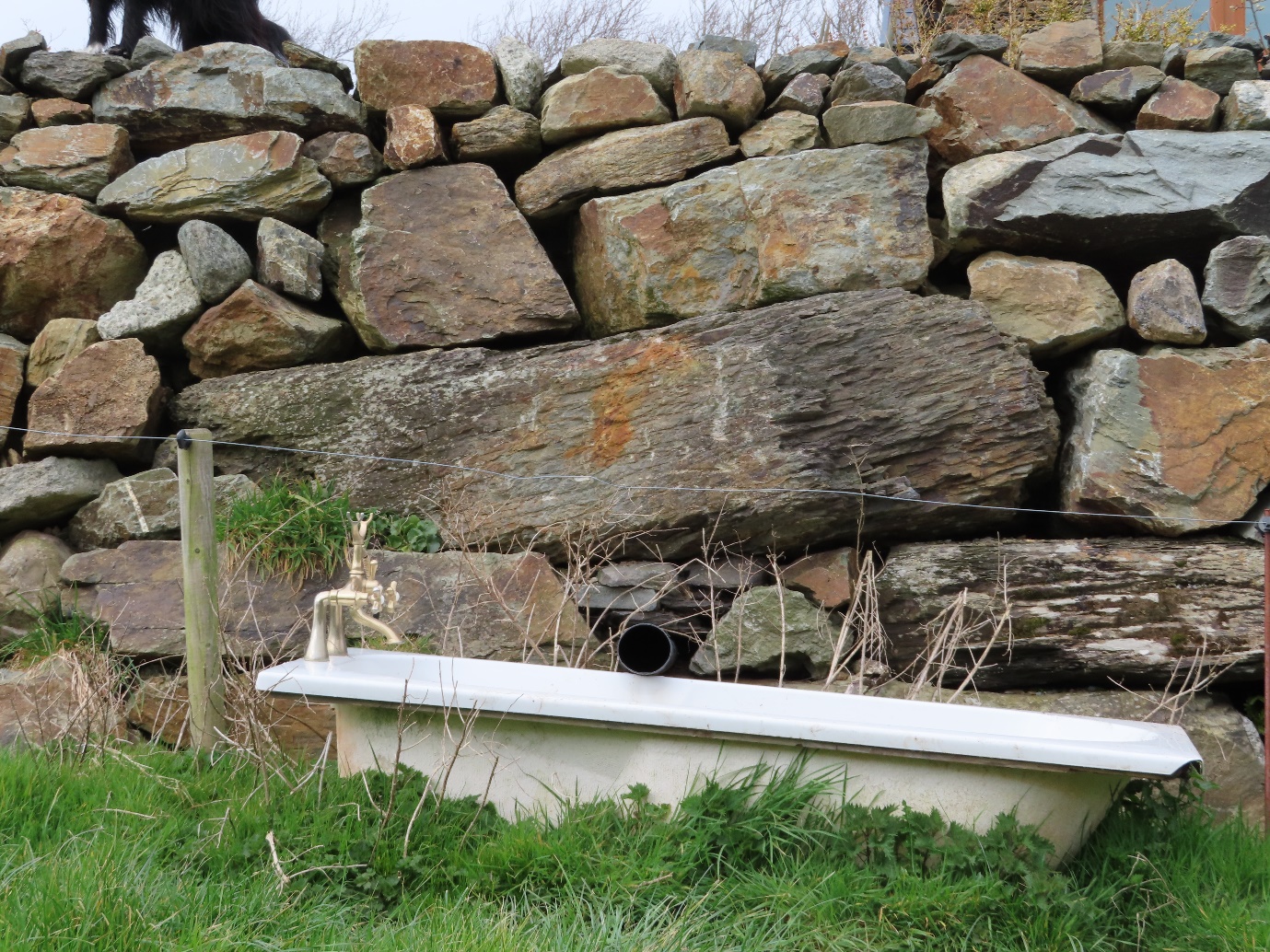 It is ironic that my thoughts turn to my water supply as soon as the rain stops. I now have seven tubs collecting rainwater. This gives me almost sixteen hundred litres for use in the garden. This may seem a lot but now that all of my new trees and shrubs have been planted, they need to be watered regularly to help them settle in. Watering my new trees in the field could involve a lot of walking if it were not for my bath. I am very pleased with my recycling efforts. The pipe filling the bath comes from the rainwater that does not make it into my water butts so I feel that I have made the best use of the water available. Some housekeeping is still involved but at least this bath only has to be cleaned once or twice a year. 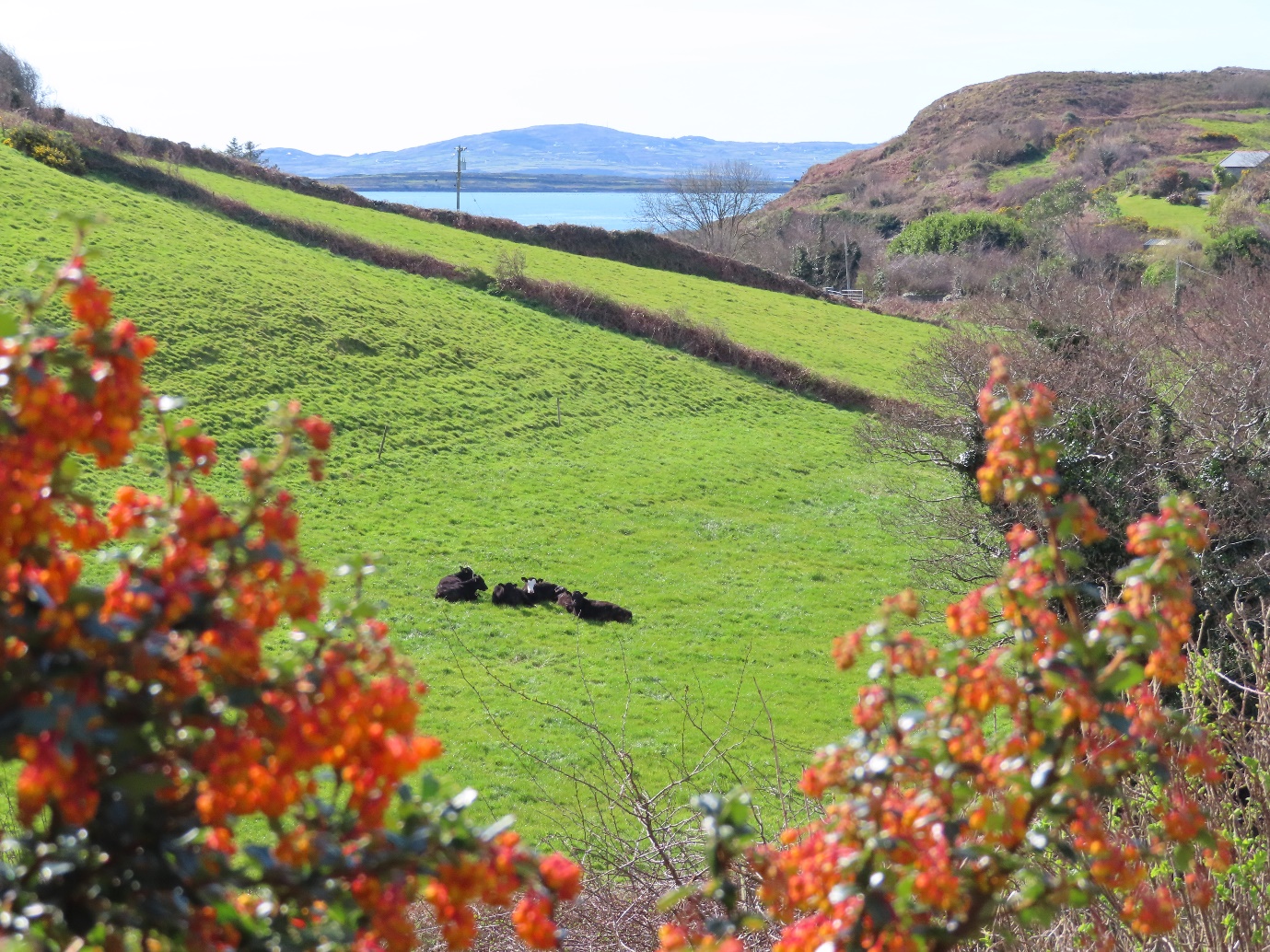 The total lockdown is still in place here as a result of Covid 19 and can be quite a challenge. I was delighted when my neighbour moved six of his cattle to the neighbouring fields. Once my planting area has been fenced off, they will be free to graze in my two fields. This means that the cattle can come and converse with me over the wall. This will make a change from talking to the dogs and may save my sanity. 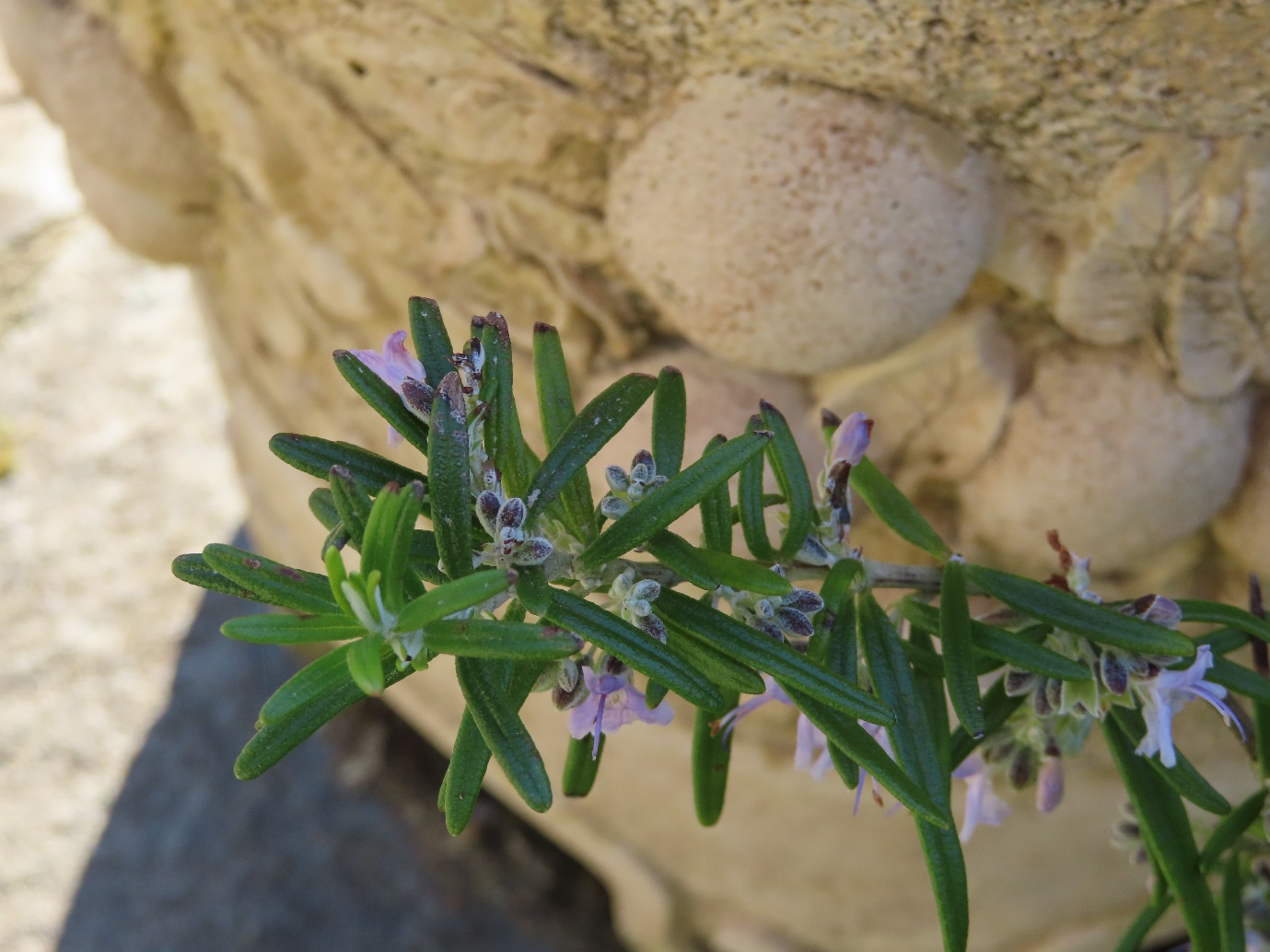 Rosemary plants do very well here and usually have flowers all the year round. However, thyme does not seem to be so hardy and most of the plants have died over the winter. The French lavender is looking very healthy and I will add more to the herb bed once I can access some. Some years ago, I bought a bay tree which turned out to have four small plants in the pot. I split them up and placed them in various parts of the garden. The one on the southwest of the house is rather battered after the winter but is still alive and has grown about five feet tall. Another by the side of the house is in better shape despite being in an area where there are strong crosswinds and is closer to eight feet in height. The third is in a medium size pot and has hardly grown at all so it is time to move it. The one that is the biggest surprise was planted behind the garden shed as I had nowhere else to put it. I promptly forgot it until the other day. It is about twelve feet high, looks very lush and healthy and is the only plant to have flowers this spring. 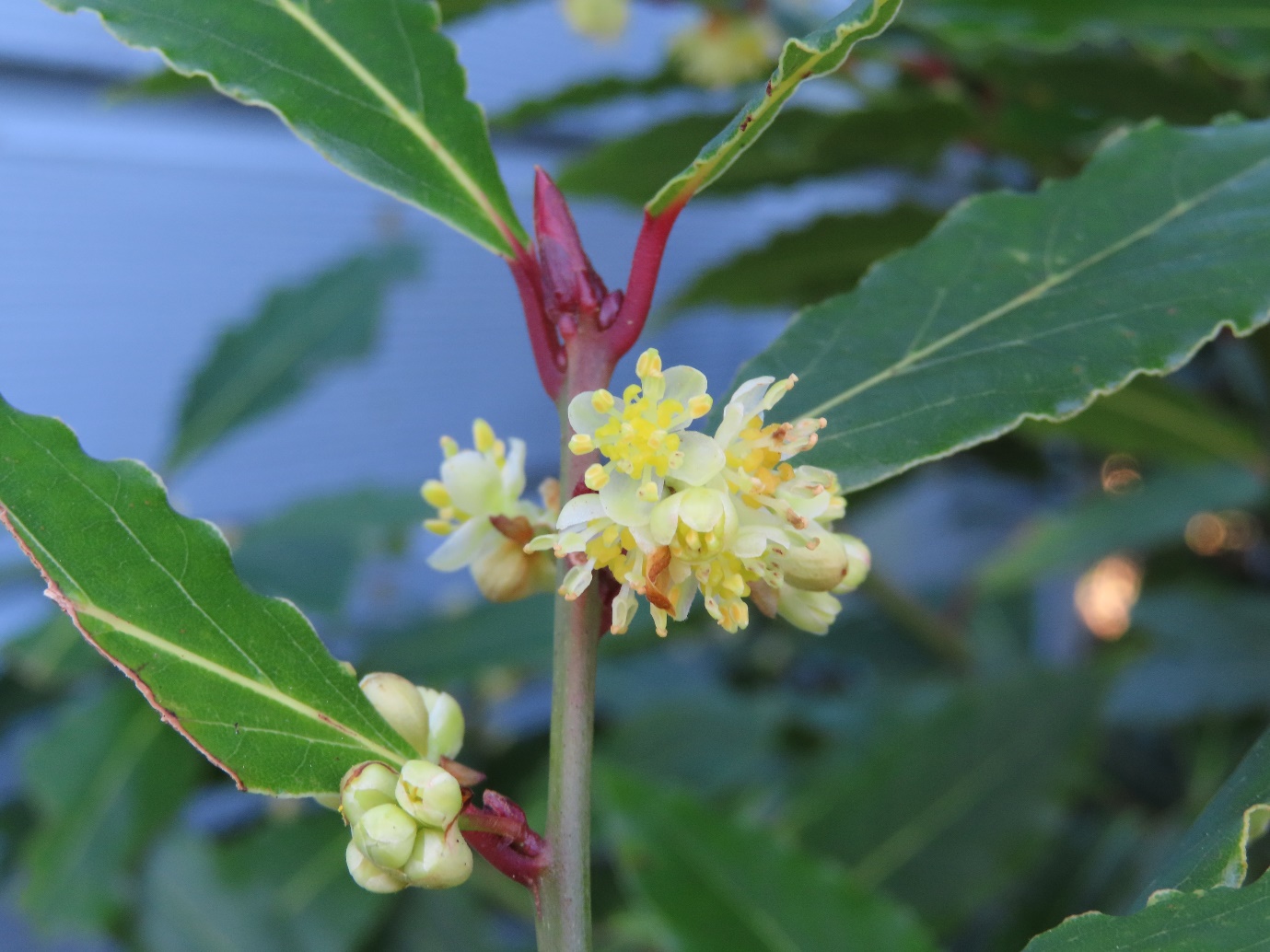 I love being in the garden most of the time and usually have to force myself to give up before I am too exhausted. Today is not one of these days. The wind is howling, rain is on its way and the ‘white horses’ are galloping across the bay. Apparently, the temperature is 13 degrees but the wind chill makes it feel a lot less. On a day like today gardening is more of a duty than a pleasure as I rush to complete some tasks before Spring is in full swing. In pre-lockdown days I would end a tiring day by meeting a friend for coffee. Now it is just me and the dogs. All three wait attentively for any crumbs that may fall their way when I have my coffee break. I don’t remember my friends ever doing this but who knows what social graces will have been lost after almost a year of semi-isolation for us all. 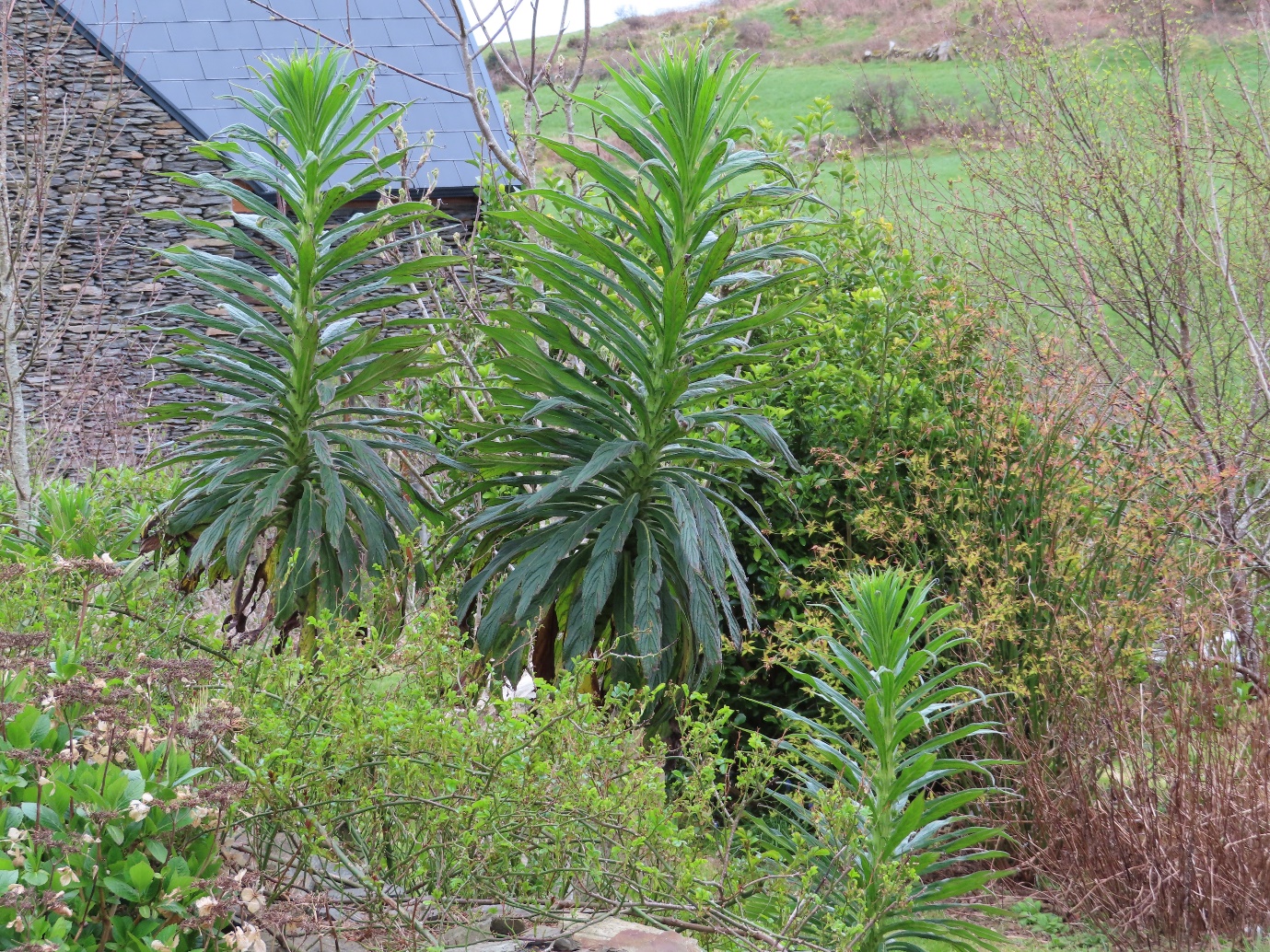 I have seen these flowers grow in walled gardens in West Cork and of course had to try them here. As most of my walls are just two feet high it has been an exercise in optimism as opposed to good sense. In spite of that three of the four plants are still surviving and may make it to summer if we do not have any more storms. After the first one was knocked to the ground and died I have learned that it is possible to save a fallen branch if it is raised from the ground by a few flat stones. This saved the echium in the photograph below from the worst of the recent gales whilst the other two branches show signs of being buffeted by the winds. 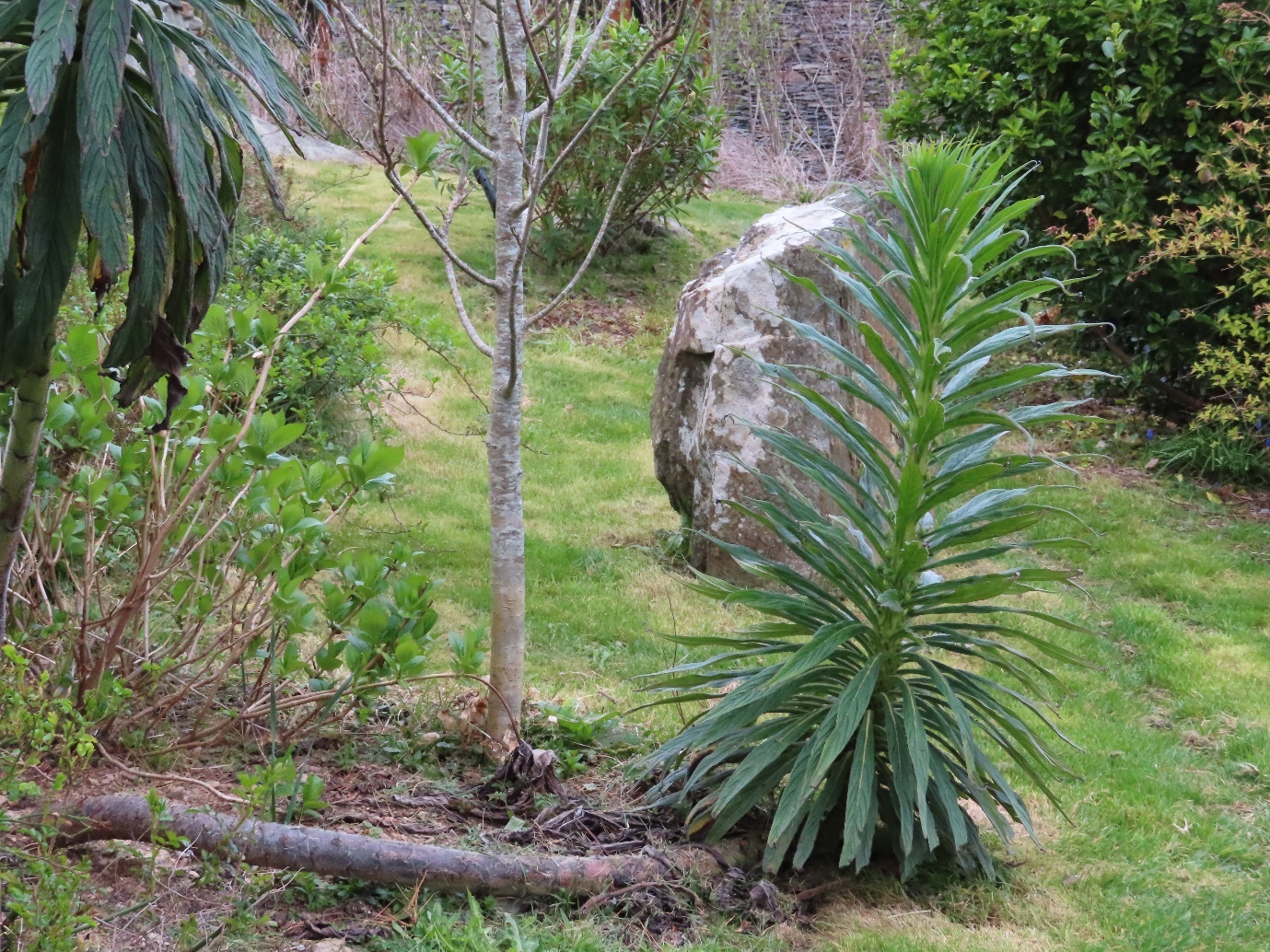 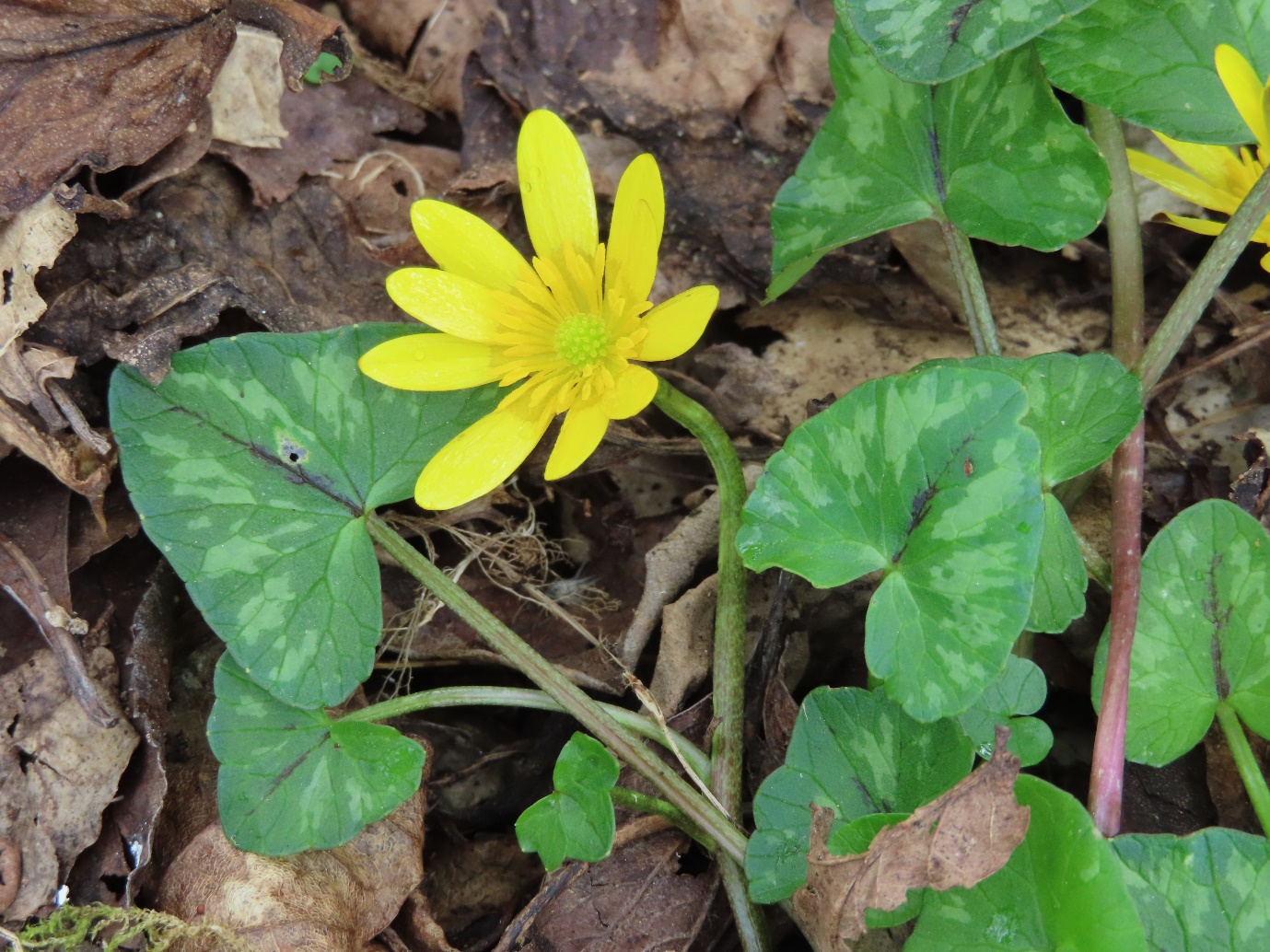 This year I have decided to give even more space to the wildflowers that seem to abound here if the seeds in the soil are given the chance to grow. It is a matter of pride that I have dozens of varieties of wildflowers despite never having bought any seeds. Every year it is a lottery and so far, I have discovered one or two new varieties each summer. I am hoping for the same luck this year. I was trying to decide which new, small area I would set aside for wildflowers. In the end it selected itself. The proposed vegetable patch close to the pine trees has not worked out as the ground is too dry. It already has a nice selection of wildflowers in flower including Ribwort Plantain, and common vetch and I hope that many others will appear as the season progresses. The variety of wildflowers in this area is impressive and I am happy to encourage the ones that live naturally in the soil here rather importing some through seed purchases. 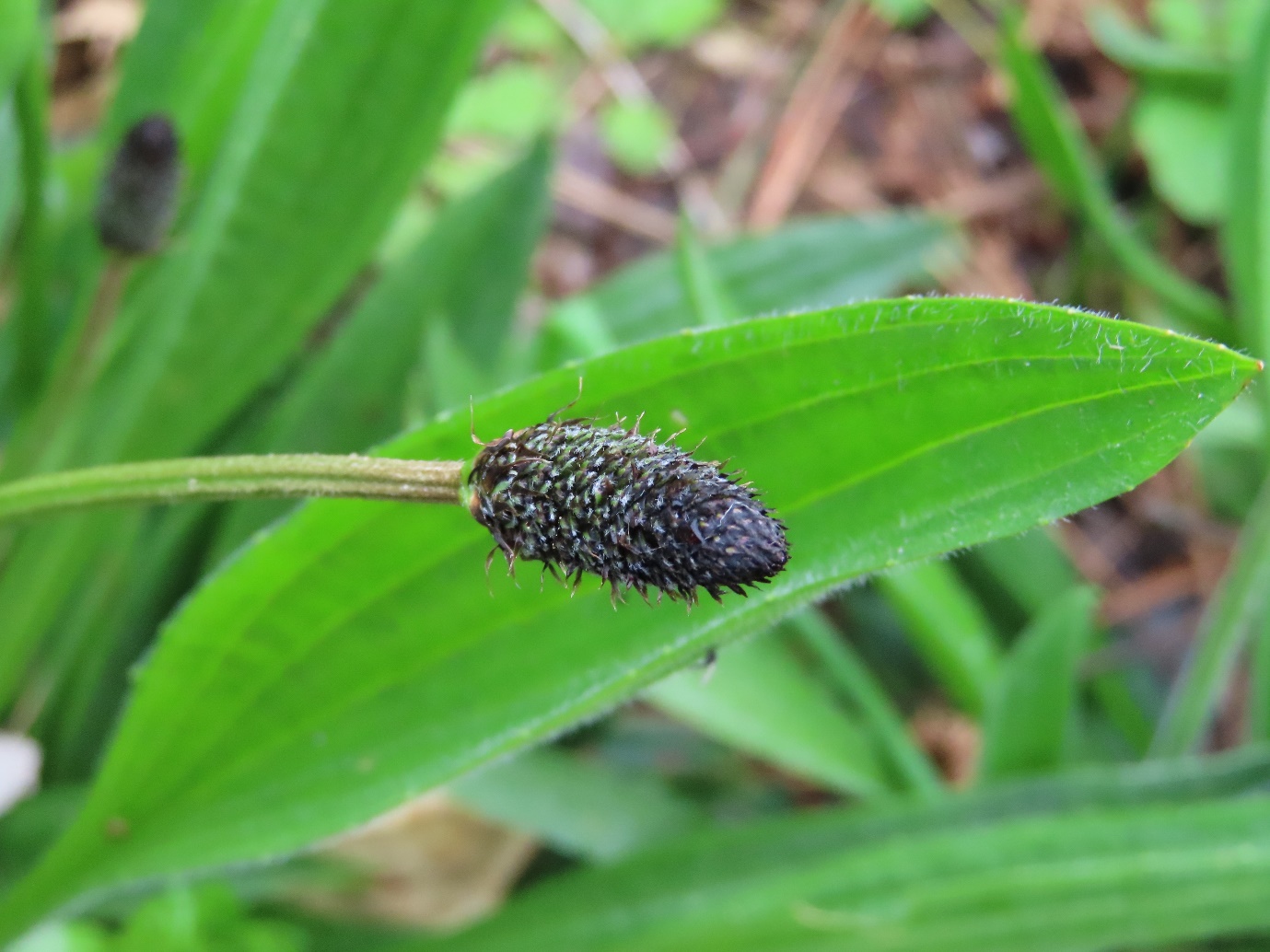 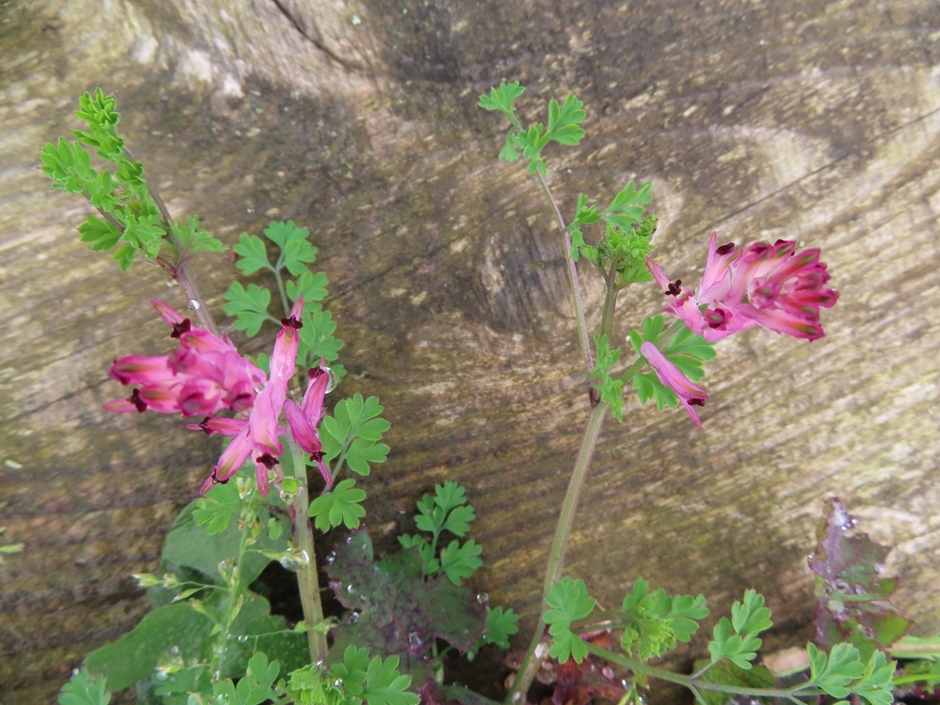 The weather has made another dramatic change with strong winds and low temperatures yet again. Hail and sleet are driving across the valley on a day when the central heating is not working. I had thought to warm myself with a bit of gardening but the bitter winds are too much for me. Instead of weaning the birds off their daily ration I have had to increase it and add fat again. The fact that it disappears in a short space of time would suggest that they still need help. I may be forced to emulate their eating habits if the weather continues and just hope that there is enough lard from the dogs’ meat to feed us all!