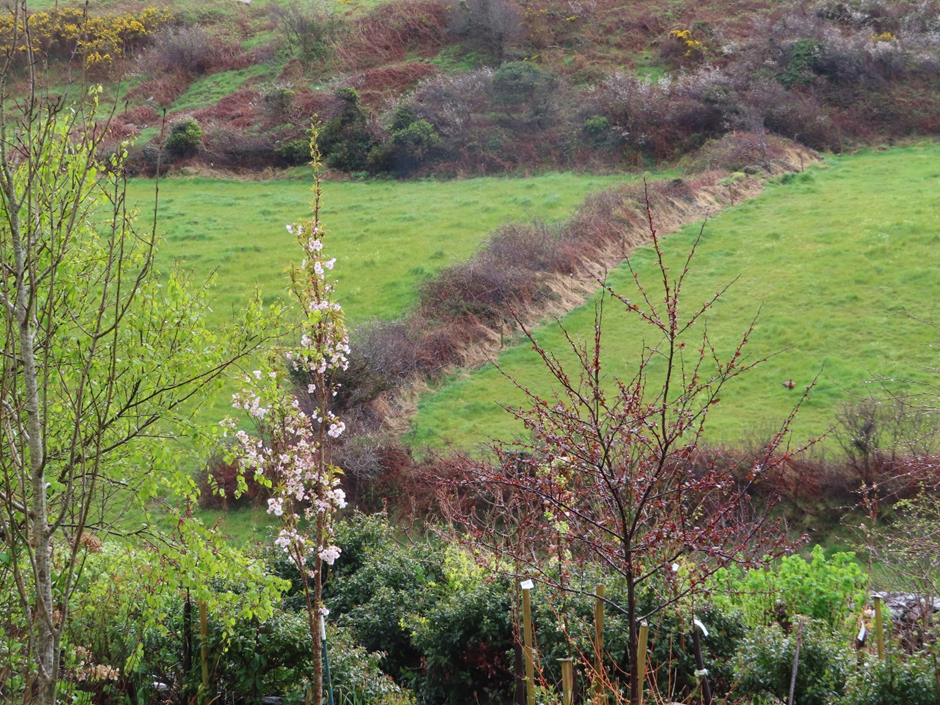 I am always surprised when the cherry blossoms appear just after the crab apple trees are at their best, as they all seem far too delicate to survive here. Even more surprising is that the blossoms can withstand strong winds and cold. One of the things that I particularly like is the juxtaposition of the ‘cultivated’ areas that I have created against the natural landscape which is always in the background. This cherry tree (above) is at the edge of my fruit garden and it is a nice contrast with the hedgerows and rough ground in my neighbour’s fields. Over the years I have come to prefer this ‘mix and match’ of garden and natural land when compared to more formal gardens. Regardless of the problems of exposure I do not want to change that aspect of the garden and spend hours trying to find solutions that include some protection and some views. 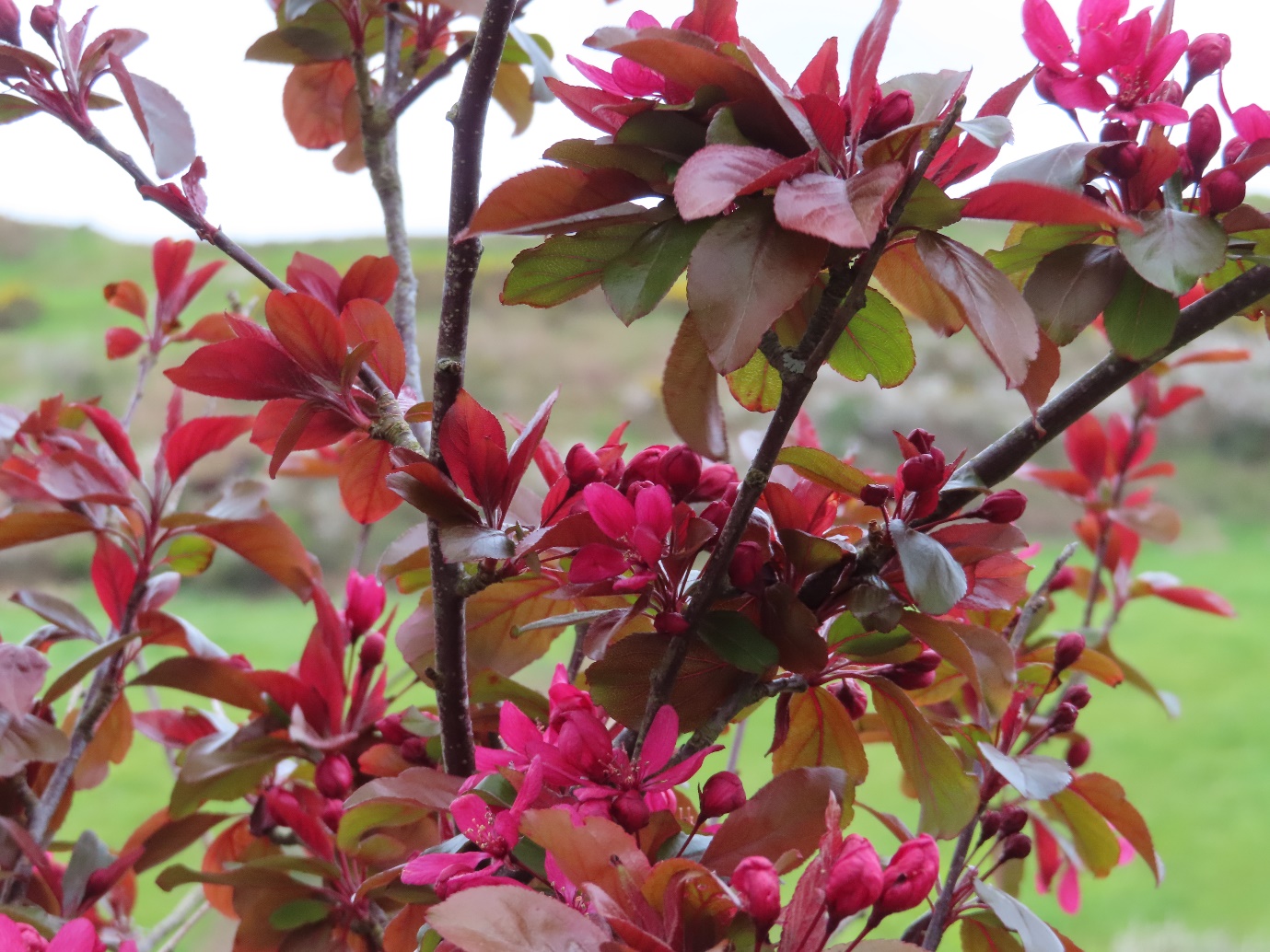 The deep pink crab apples are always the last to flower but are well worth the wait. This is Malus ‘Scarlett’ a relatively new addition to my collection which is proving as robust as its cousins. 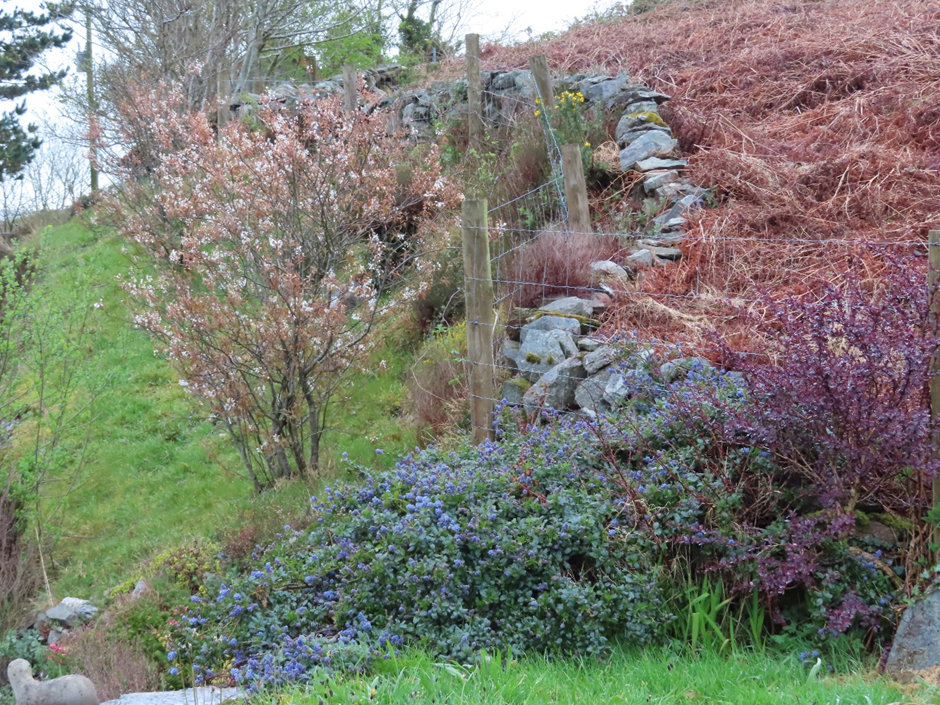 The bank behind my house is another ‘mix and match’ area. In the foreground is a ceanothus that I planted about ten years ago. It is the perfect example of the vagaries of gardening as it usually has flowers at Christmas but this year produced nothing until April. I have planted three Amelanchier lamarckii on the bank despite the fact that it is mainly rock. All are thriving on perhaps a foot or two of soil and don’t seem to mind the screaming winds that barrel down the drive from the south west. The winding stone wall is the boundary with my neighbour’s property and I suspect is very old. It adds to the charm as well as acting as a counterpoint to the bracken on the other side. 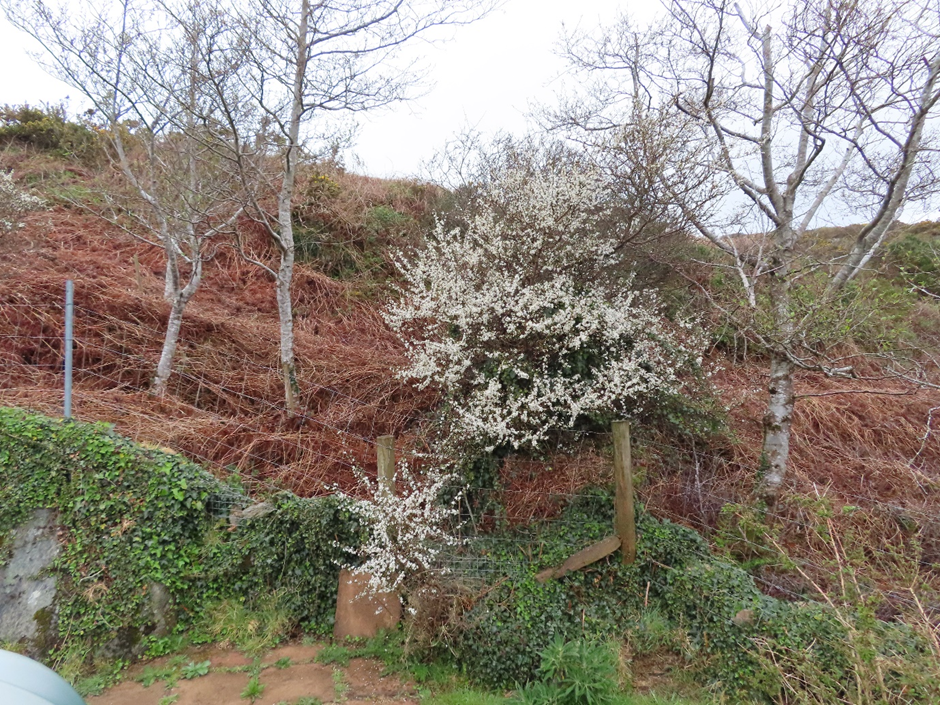 This blackthorn is on my neighbour’s property but blossoms on my side of the fence so I consider it ‘half’ mine. Last years faded bracken is the perfect contrast and provides endless shelter for a wide variety of birds who just have to hop over the fence to my birdfeeders. 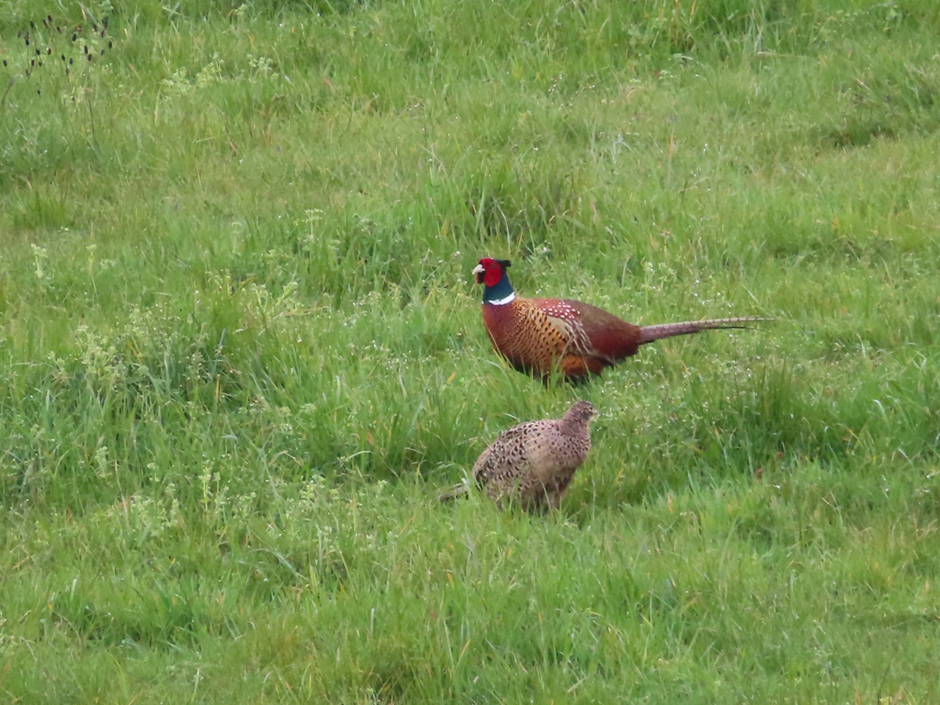 The nights have become a lot quieter, so it is time for the days to liven up. Today a fox has been crying on a regular basis and I think this means that she has had her cubs and is defending her territory. Meanwhile, the adult pheasant has found a mate and they are prancing around the field within a short distance of the fox. It amazes me how these two species live here in what appears to be harmony without any obvious casualties. I would love to know whether these two are a pair that meet up each spring, but am not able to make a definite identification of the female. 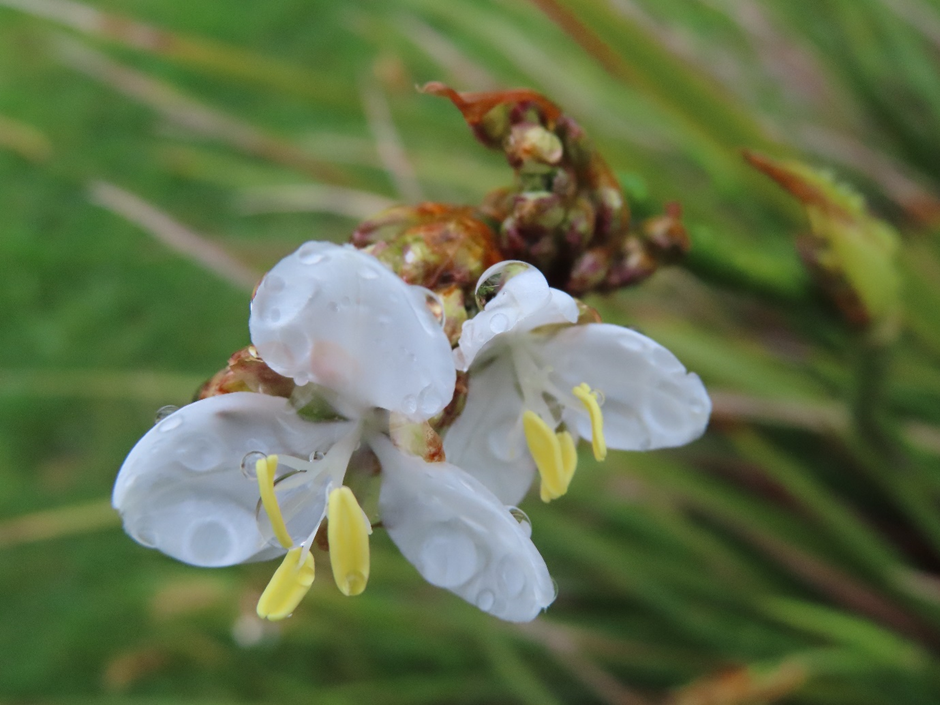 The blossoms are coming fast and furious now and this Libertia grandiflora is just starting to flower. It is an excellent coastal plant but has one serious flaw as far as I am concerned – it seeds itself with abandon around the garden and the mature plants are very difficult to remove. For this reason, I spend a considerable amount of time in spring removing the seed heads before they open in an attempt to contain the plants and am always on the lookout for seedlings that have escaped my vigilance. 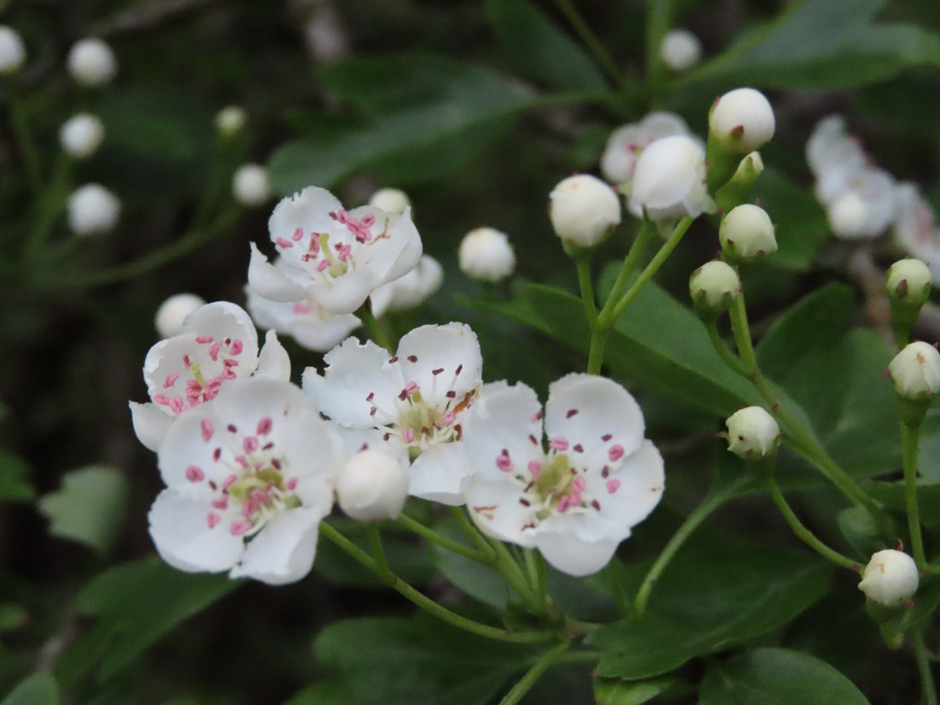 I use the common hawthorn and the Crataegus persimilis ‘Prunifolia’ throughout the garden. They are the perfect trees for a hedgerow and windbreaks but are attractive enough to stand on their own beside other more ‘sophisticated’ trees. I have no need to buy any of the common variety as the seeds produce at least half a dozen new plants for me each year. They also grow quickly which is essential when you are needing shelter. I have yet to find any faults with this versatile small tree. 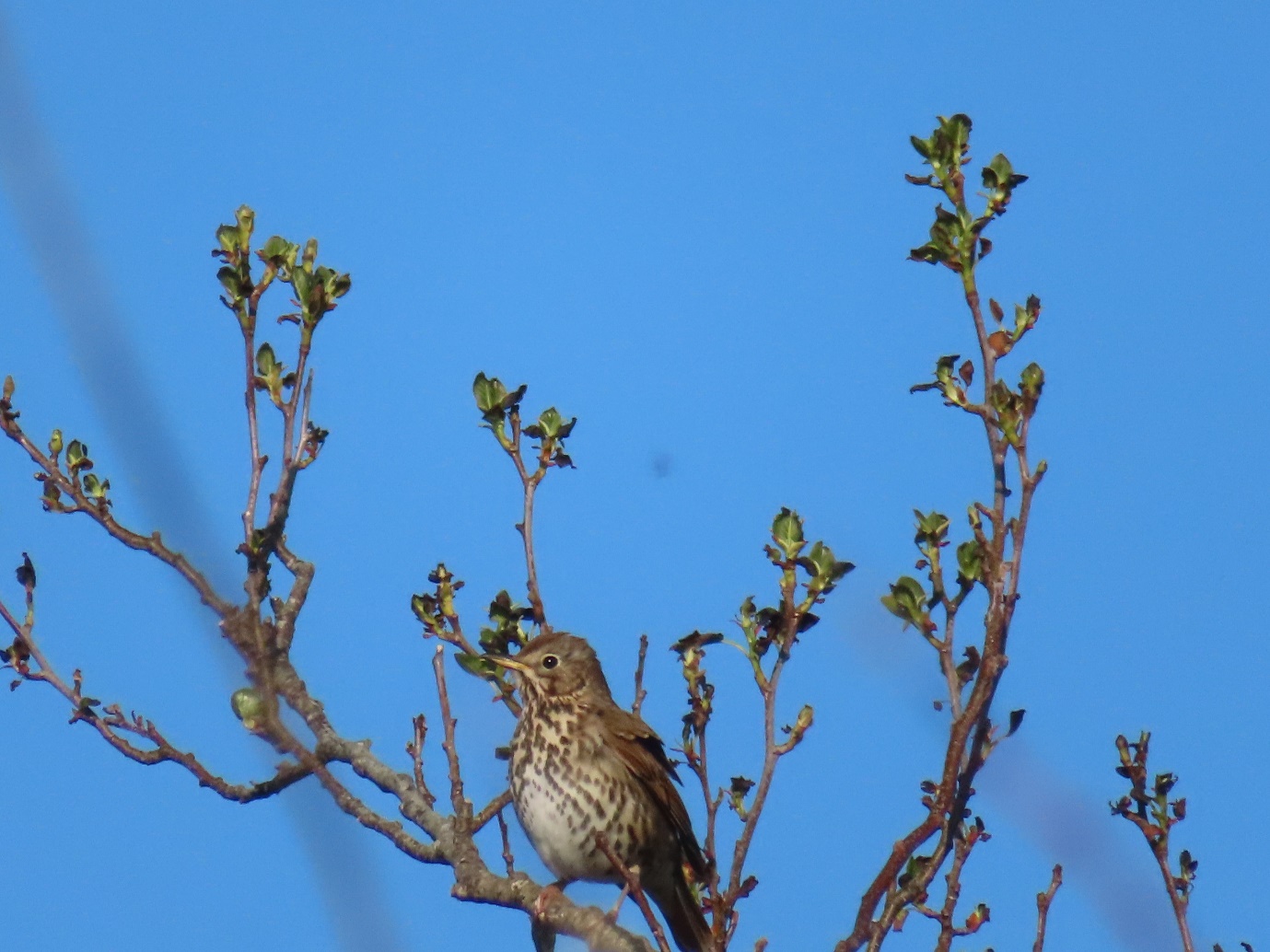 I always wonder how birds manage to sustain themselves given the amount of energy that thy use up singing. This song thrush seems to spend all of his days at the top of the Italian alders and I can’t imagine that it has a lot of spare time to eat. There are now three collared doves visiting the driveway and the cooing is a pleasant change to the noise of the crows. They are particularly attractive birds and I wonder how they managed to find my garden as they apparently tend to avoid open countryside. The young male pheasant is back now that his father is otherwise engaged. He has taken to wandering in the garden proper and causing me great anxiety. I would hate him to become the target of my dogs. I occasionally see him with a small female but I think that this is a sibling rather than a mate. To date I have confirmed sightings that four of my family have survived the winter and hope that some of the females have moved to pastures and partners new. 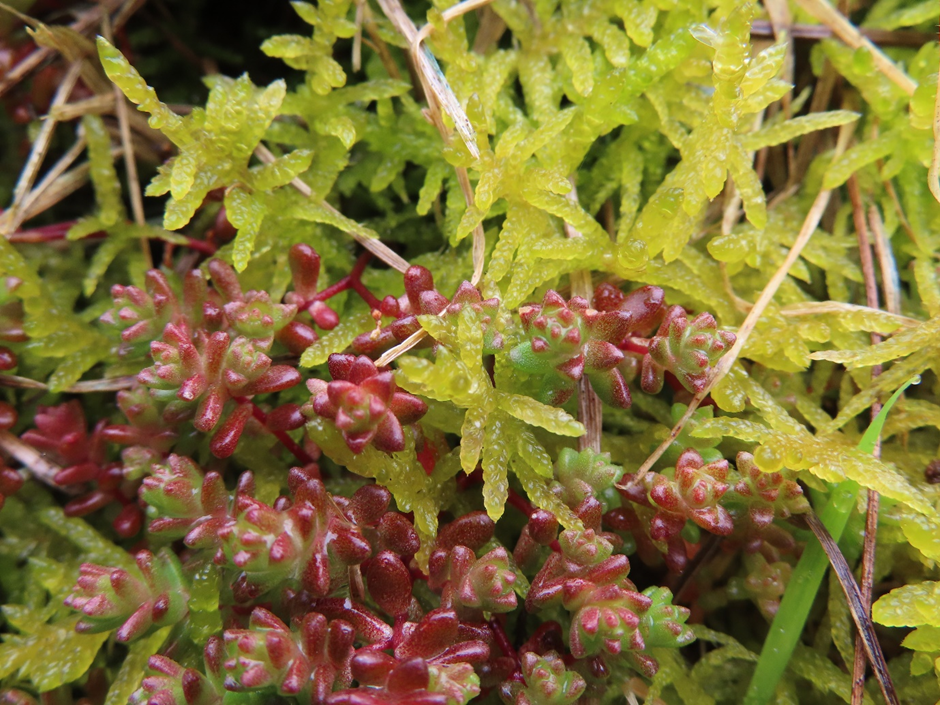 The bank on the north side of the house has a number of different aspects. Some have little or no soil and some have a foot or two. Areas are either in full sun or full shade. This combination of plants has always puzzled me as it consists of a damp loving moss and a sun loving stonecrop. As usual I leave well alone as nature is a far better gardener than I will ever be. 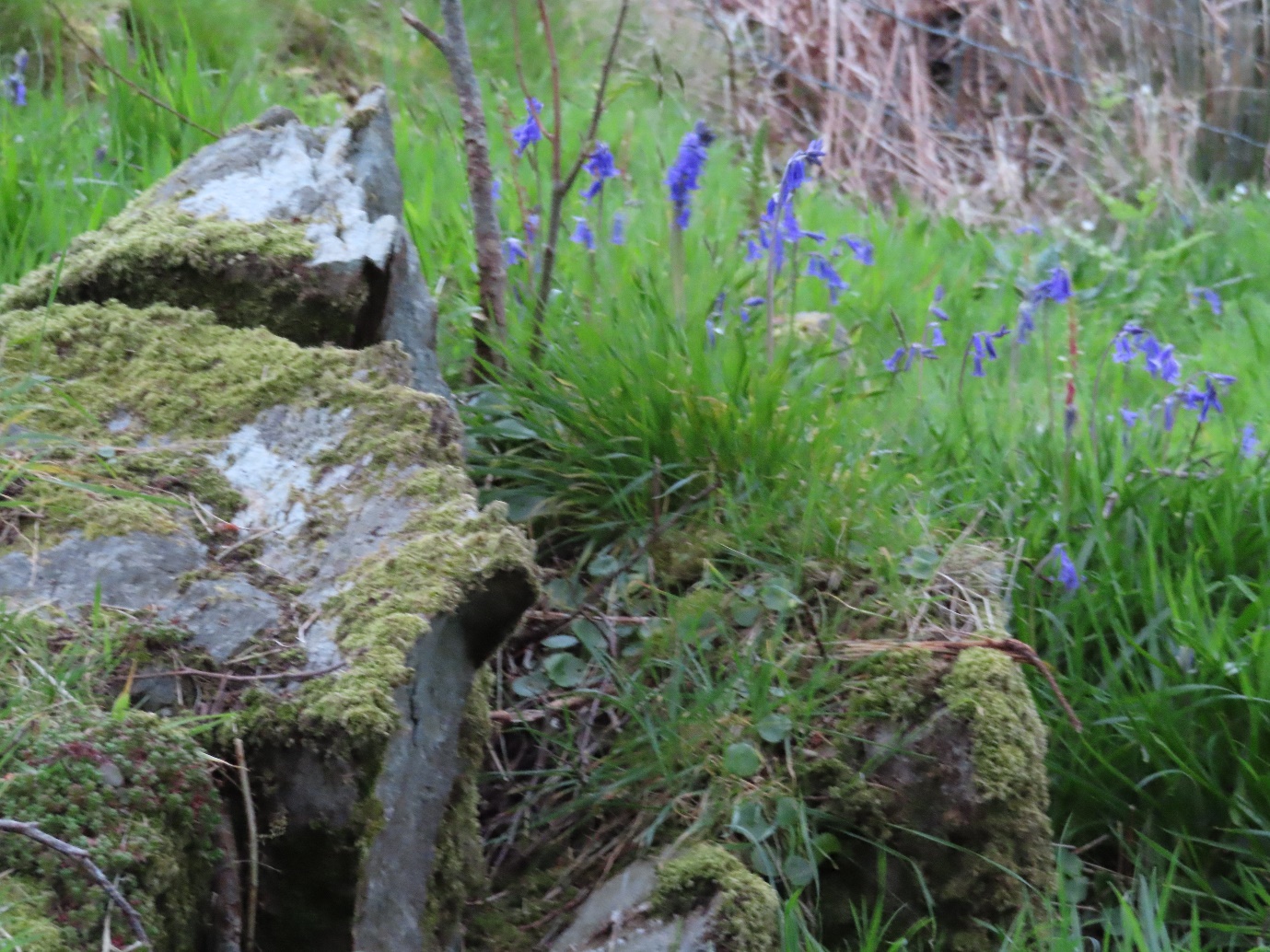 When I moved here over 10 years ago there were no bluebells in the garden and just a few in the property next door. Over the years they have seeded themselves on the bank behind the house and are threatening to take over the area. At the moment they are a pleasant contrast with the Dandelions, Violets, red clover and other wild flowers appearing on the bank. 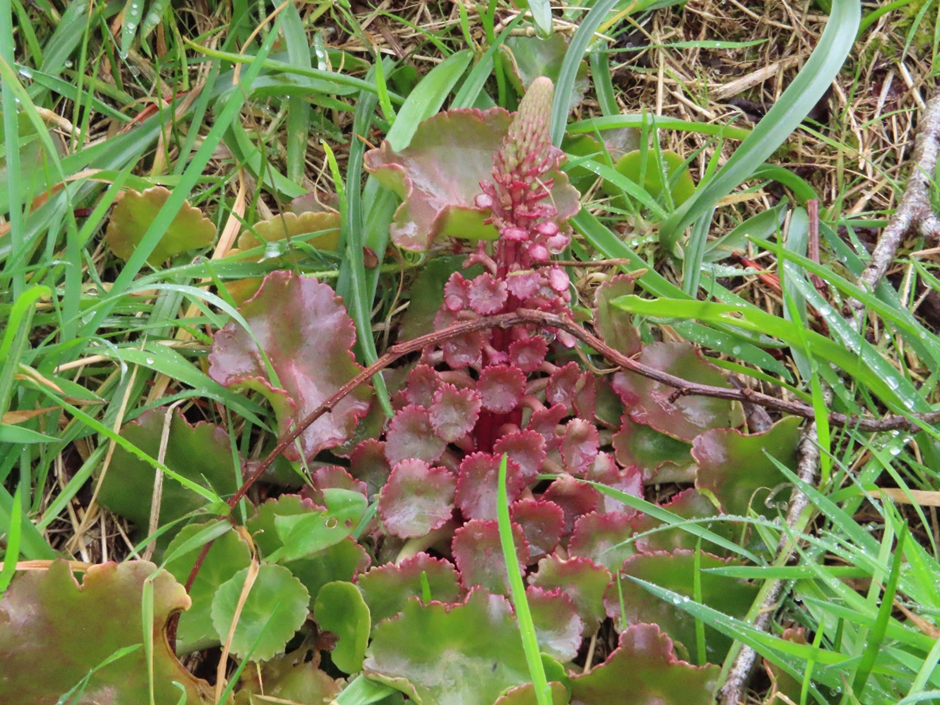 Navelwort is a very versatile wild flower. It grows throughout the garden in all conditions and its size and shape vary depending on these. The ones on the dry bank behind the house tend to be smaller and a pink/wine colour. In shady parts of the garden, they grow to four times the size and have a deep green leaf. 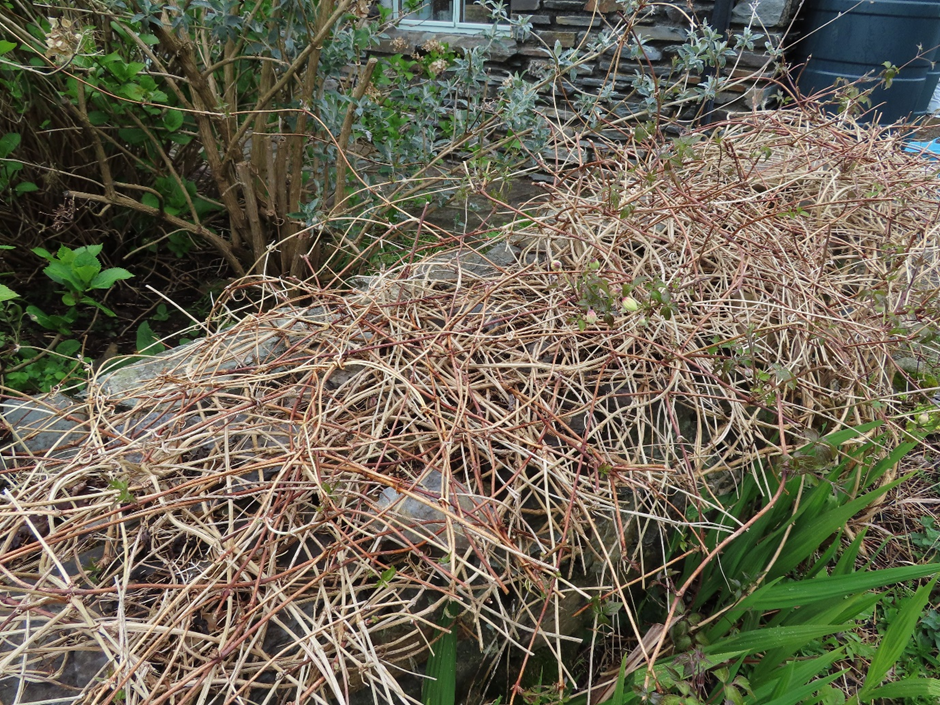 When I first started gardening, I had a vague idea of the challenges that were in store for me. Slugs , snails, rabbits and diseases were all possibilities. No one warded me that mice and voles would be the worst offenders. Now that they have eaten all of my Hellebores these creatures have moved on to my Clematis. Five of them to be precise. I had thought that I was being very clever growing these climbers along my drystone walls in the absence of any other possible support. I now know that I have simply provided the animals with both food and accommodation. As you can see from the photo the above ‘banqueting table’ has been stripped bare apart from one or two tiny flowers. 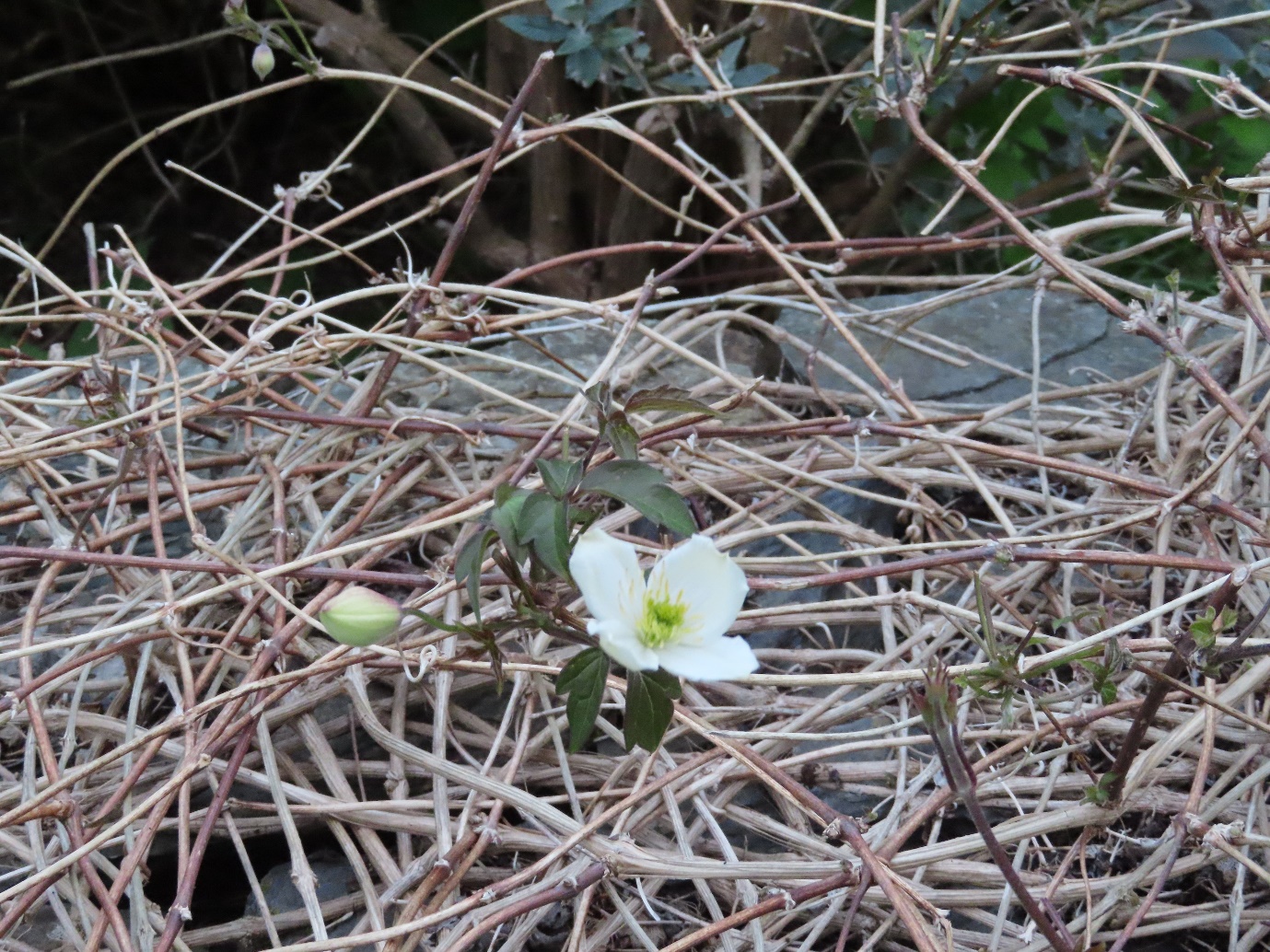 The lone clematis that escaped the notice of the mice and voles. 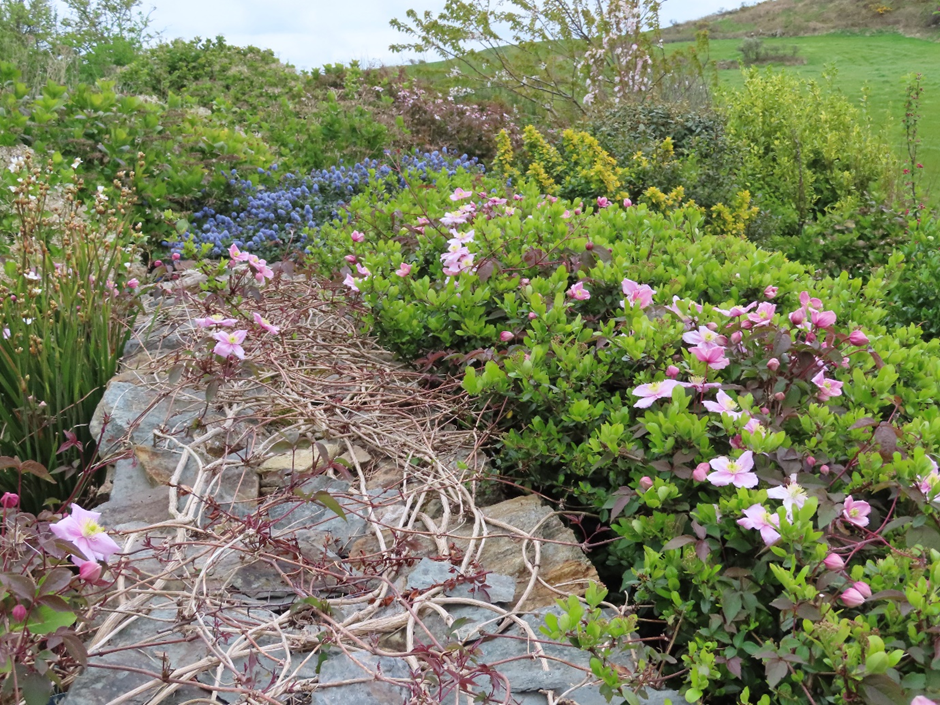 This clematis has managed to find a safe home on the thorny Pyracantha at the side of the wall on the one side and the hydrangea on the other. In the last few days, the central stems have started to produce leaves and buds and I wonder if something has removed the voles. I don’t want to accuse my dogs but they have been paying the walls a lot of attention lately. In reality I think it unlikely they have killed anything but have simple moved them on to pastures (and plants) new. 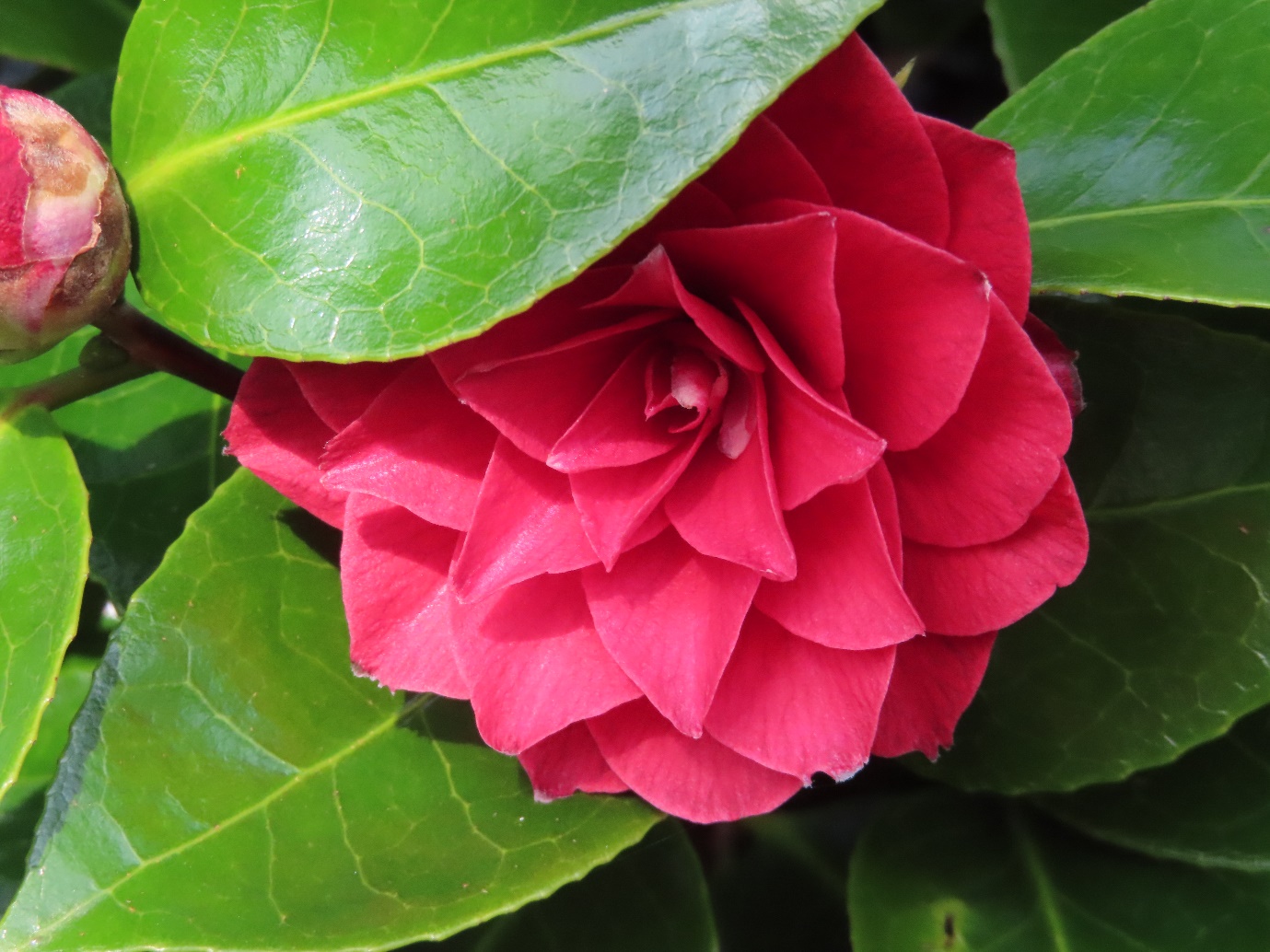 The clematis continue to thrive in the copse and I have now dedicated another small area to them. Sadly, these are some of the last blossoms for this year but as they will soon be replaced by my young rhododendron plants, I have some more dramatic displays on the way. At least the mice and voles have not yet discovered that they just might be a food source. 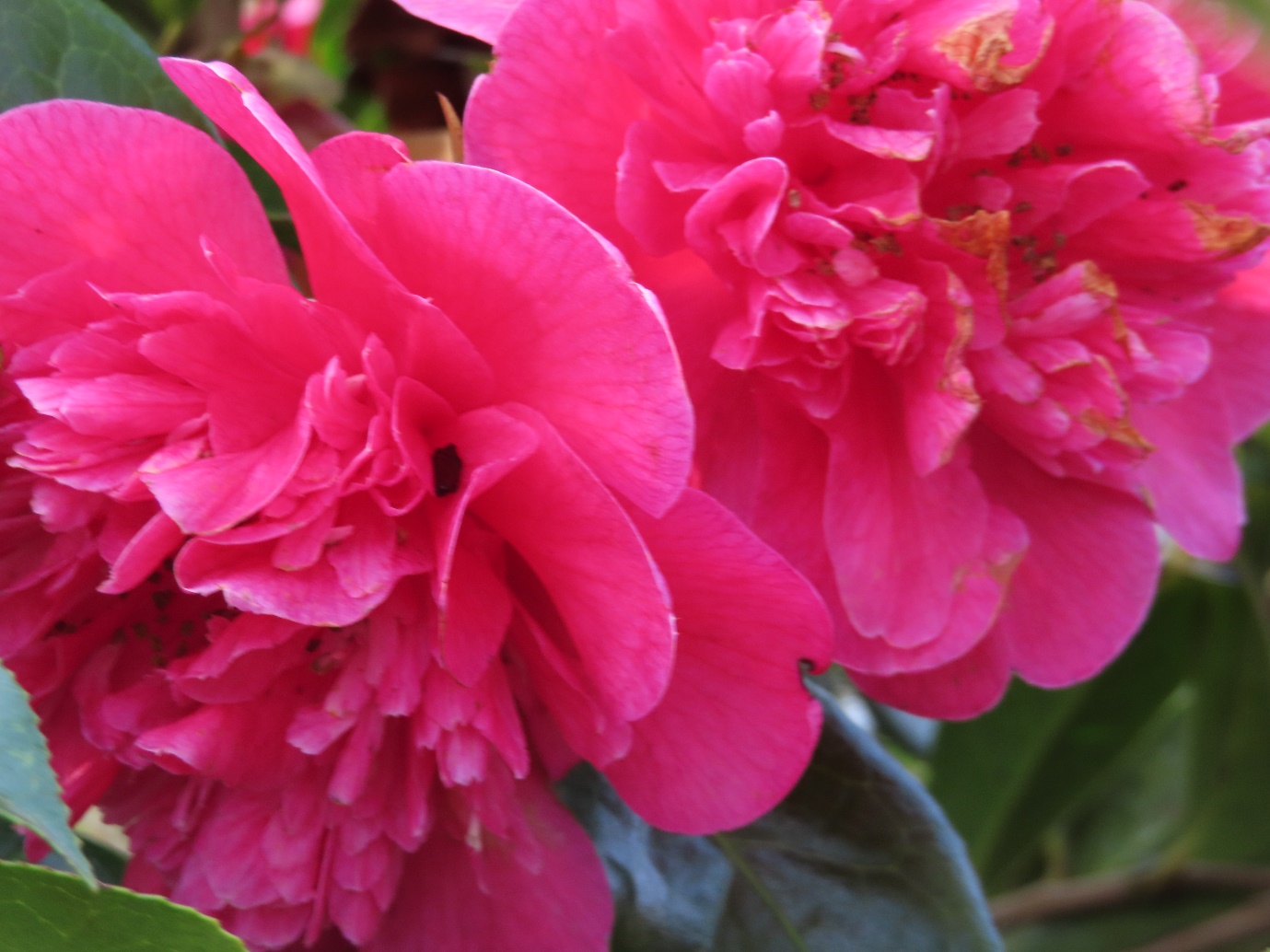 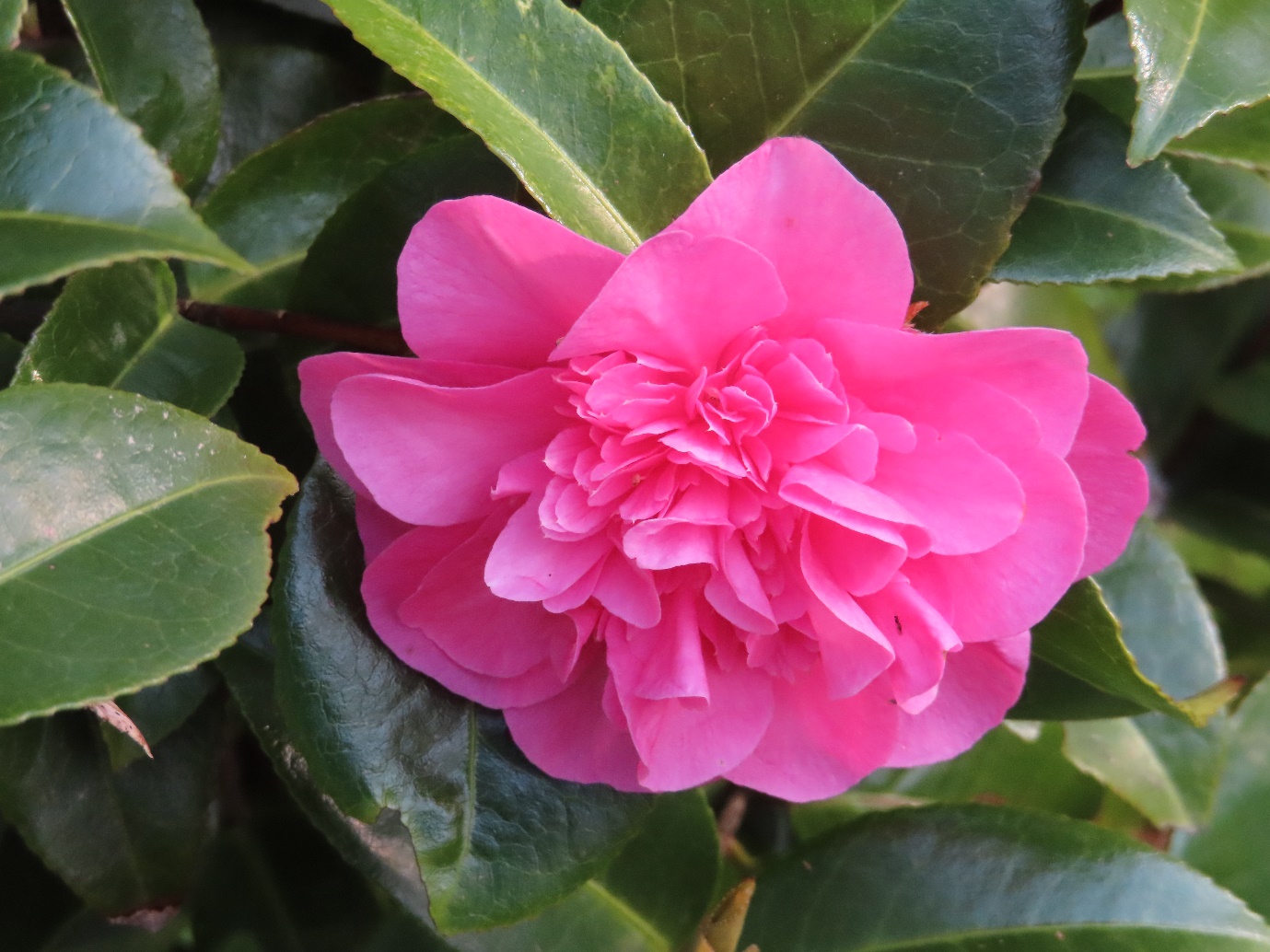