In the Absence of Leaves 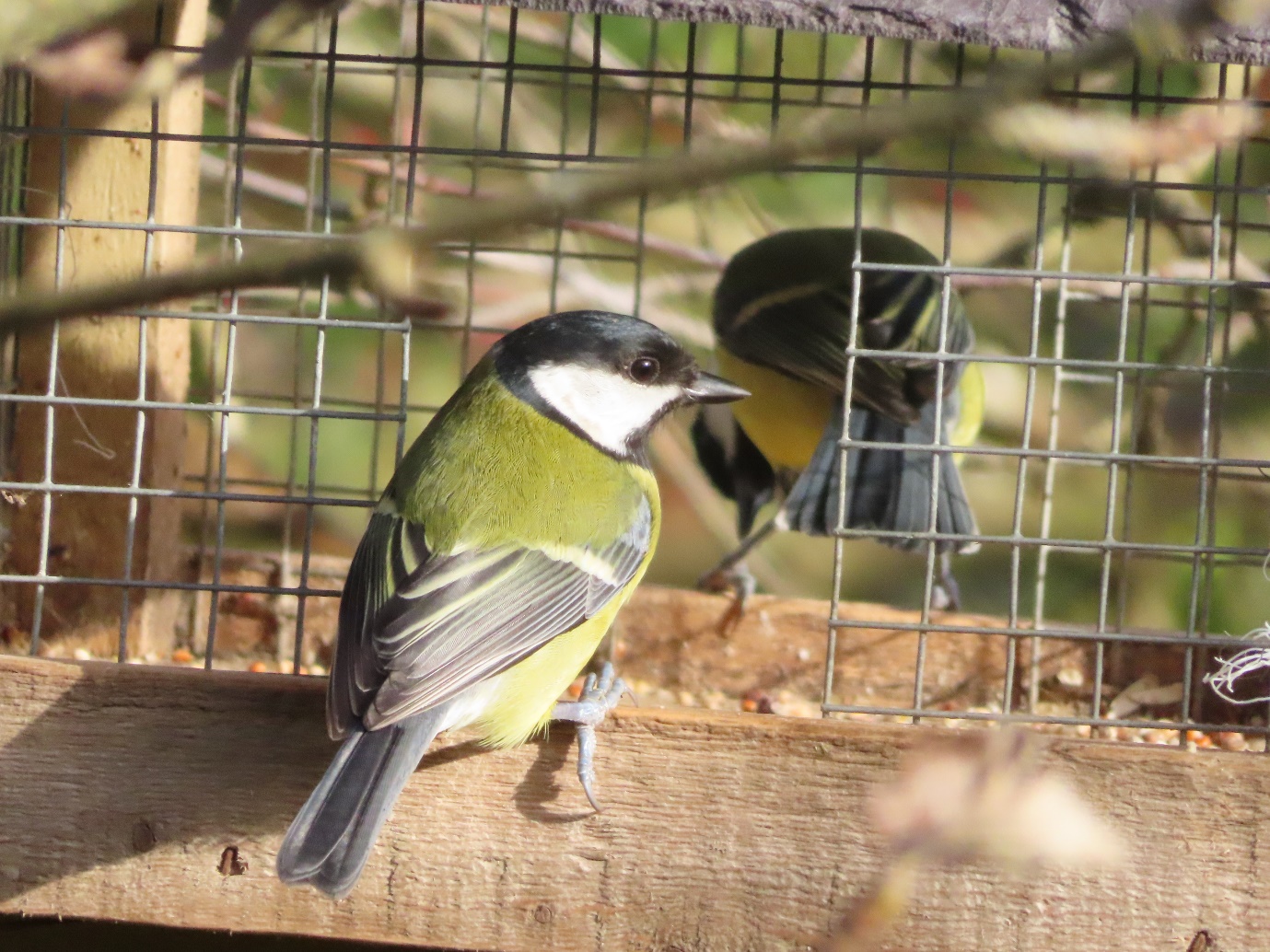 Winter has arrived with a bang and in an unusual collaboration with nature I planted my garlic on the day before the first heavy frost and put out all of the bird feeders. So, with any luck I will have plenty of birds throughout the winter and no vampires. 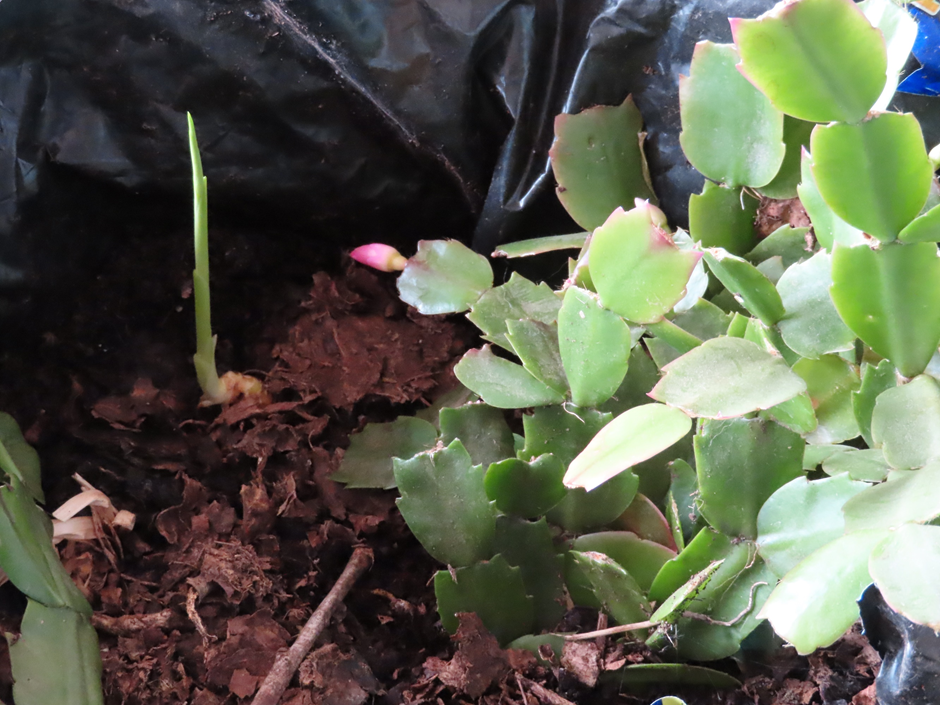 Indoors, my newly planted turmeric is keeping my Christmas cactus company and has grown four inches in a week so I may have a second-generation crop from a previous plant. If only I could be so successful with my outdoor vegetables. My recently planted onions are putting out substantial roots to my surprise. I know this because the birds keep pulling them up so that I can see the quick growth. I hope they tire of the game soon but I doubt they will. 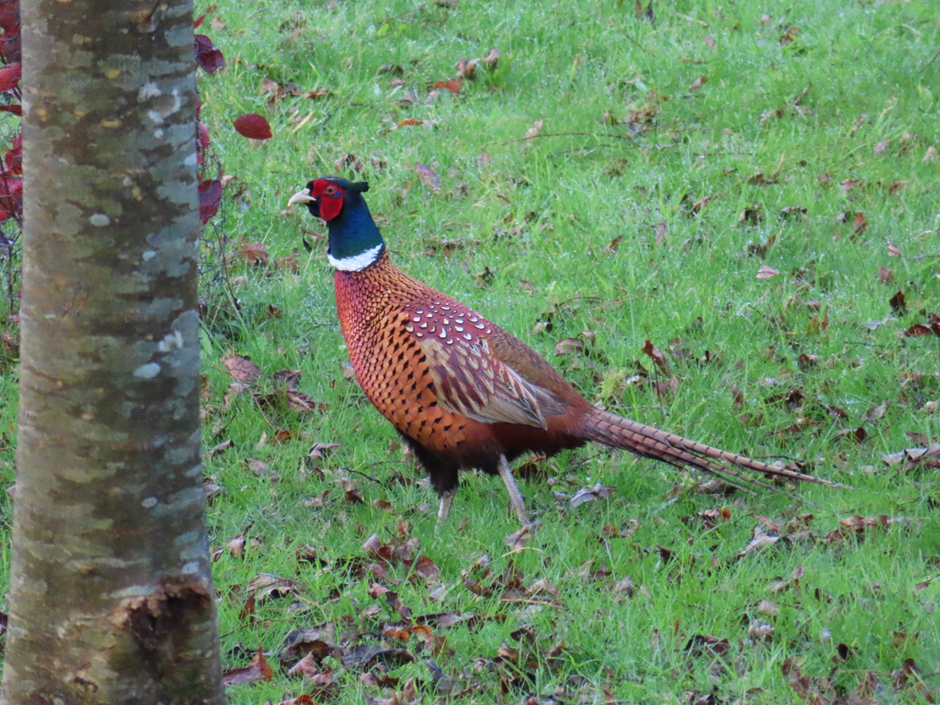 The pheasants have moved from the hedgerows in the field to my driveway and I have decided that it is a subtle message that I need to start feeding them. So far, I have seen the two adults, a young male and two females. I love the way the adults stroll about as if they do not have a care in the world. The younger birds are more cautious and dash for cover if they see me. I am hoping that their five siblings are still alive and will join the family throughout the winter. However, it is difficult to differentiate between the young females and they may all be alive and well and feeding on the driveway at different times. 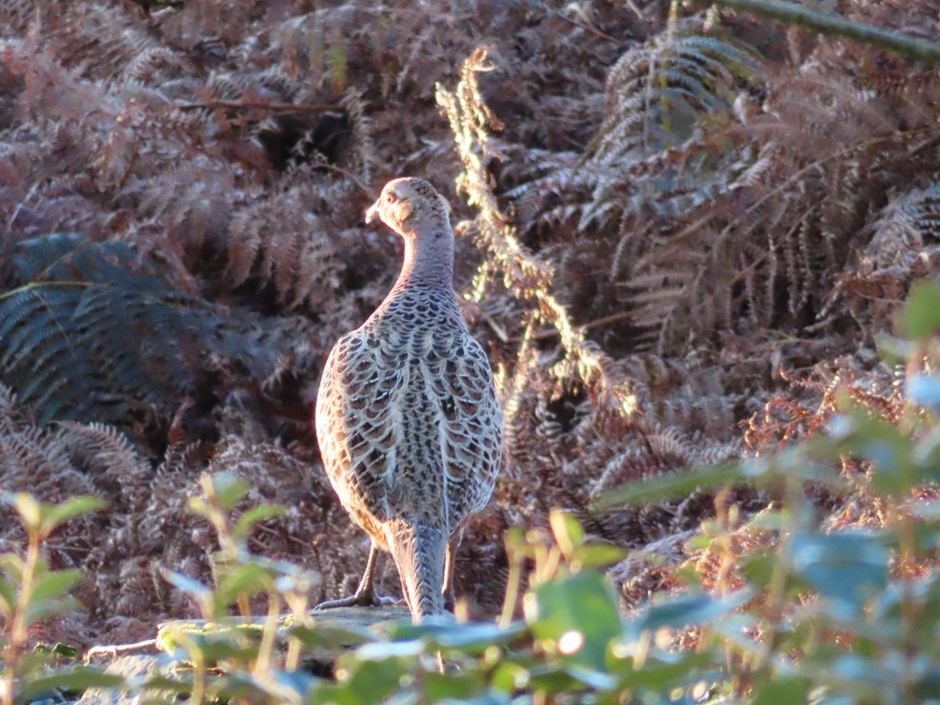 I am still puzzled by the robins in the garden as I can’t figure out how many I have. Every time I approach a feeder there is at least one if not two of them on patrol. This year I have spread the feeders throughout the garden to try and give all birds a fighting chance at feeding but the robins still attend them all. I can’t tell whether it is just a few robins dashing from feeder to feeder as I do my rounds or a significant number living nearby. Not to mention the robin that is guarding the remaining Spindle berries on the hedge by the house. In fact, yesterday there were three robins in some sort of interaction all within a few feet of each other and just under the remaining berries. 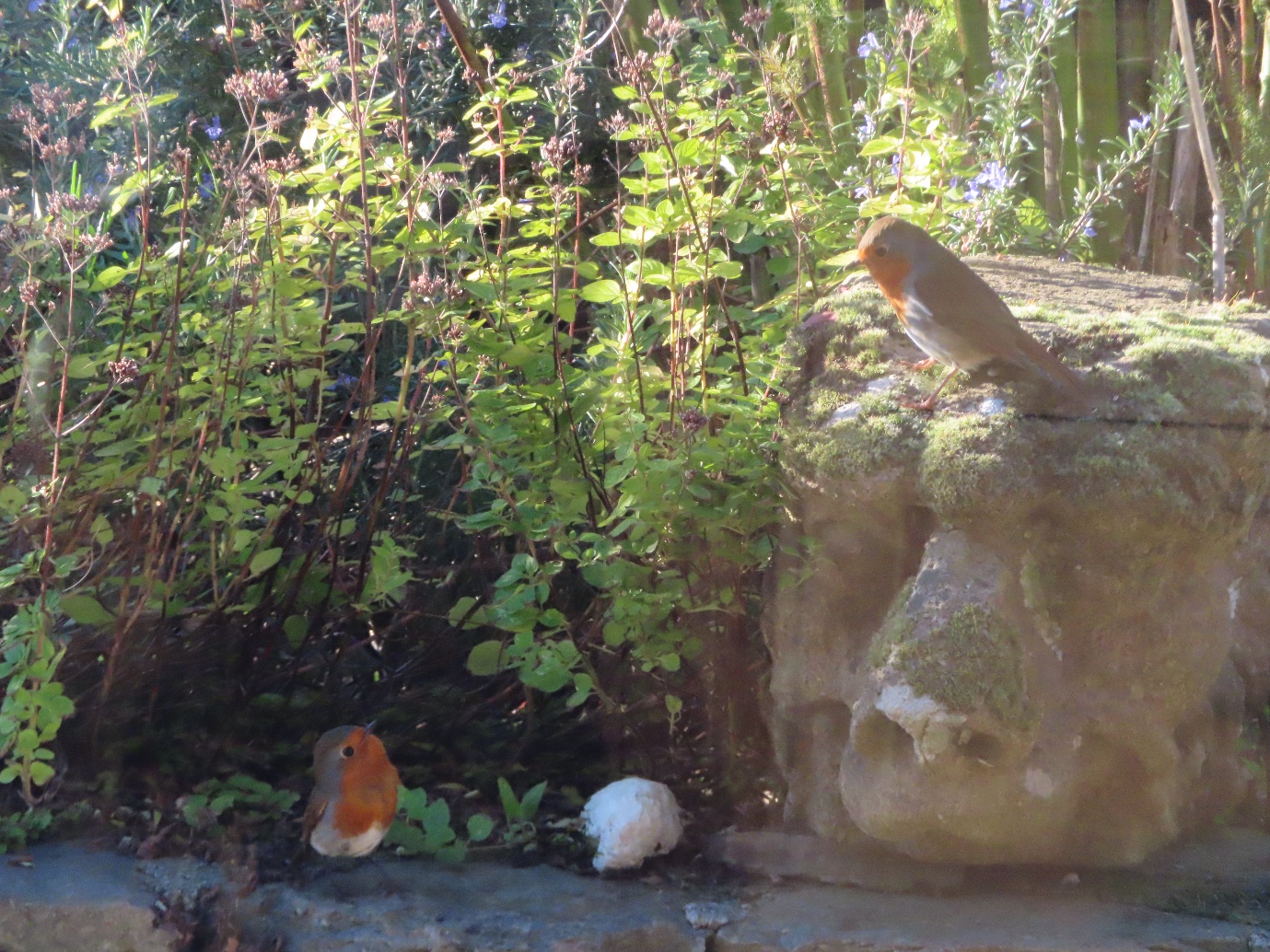 I love the one on the left of the photograph as it looks like some sort of cartoon robin. I had to take these photos through the kitchen window to avoid spooking the birds but you can clearly see the three robins in the photograph below and I would love to know what was going on between them. 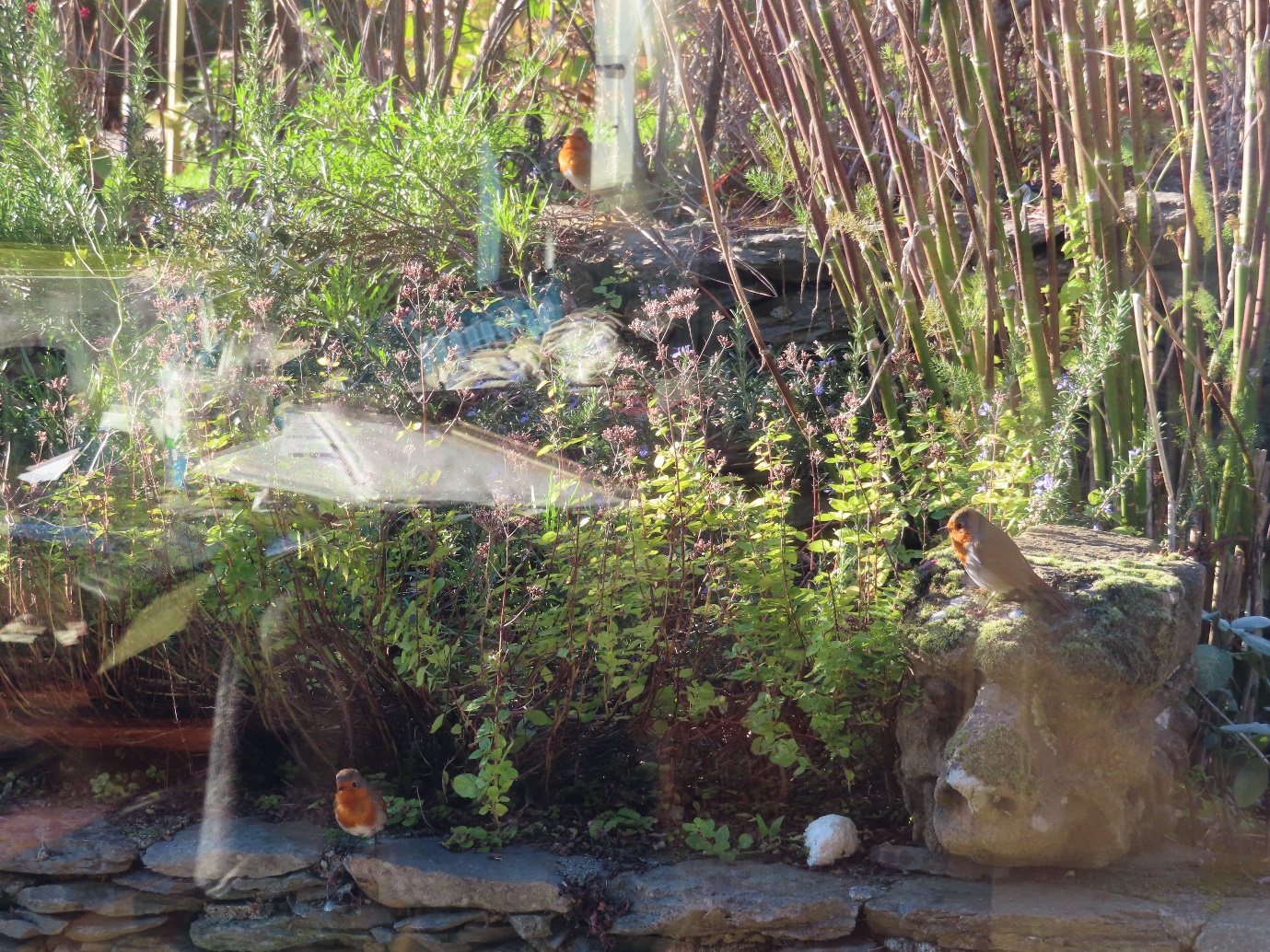 Most of the leaves may have fallen from the trees but there is still a lot of beauty in the garden. This is the remains of a Hosta leaf coating the grass like delicate lace. 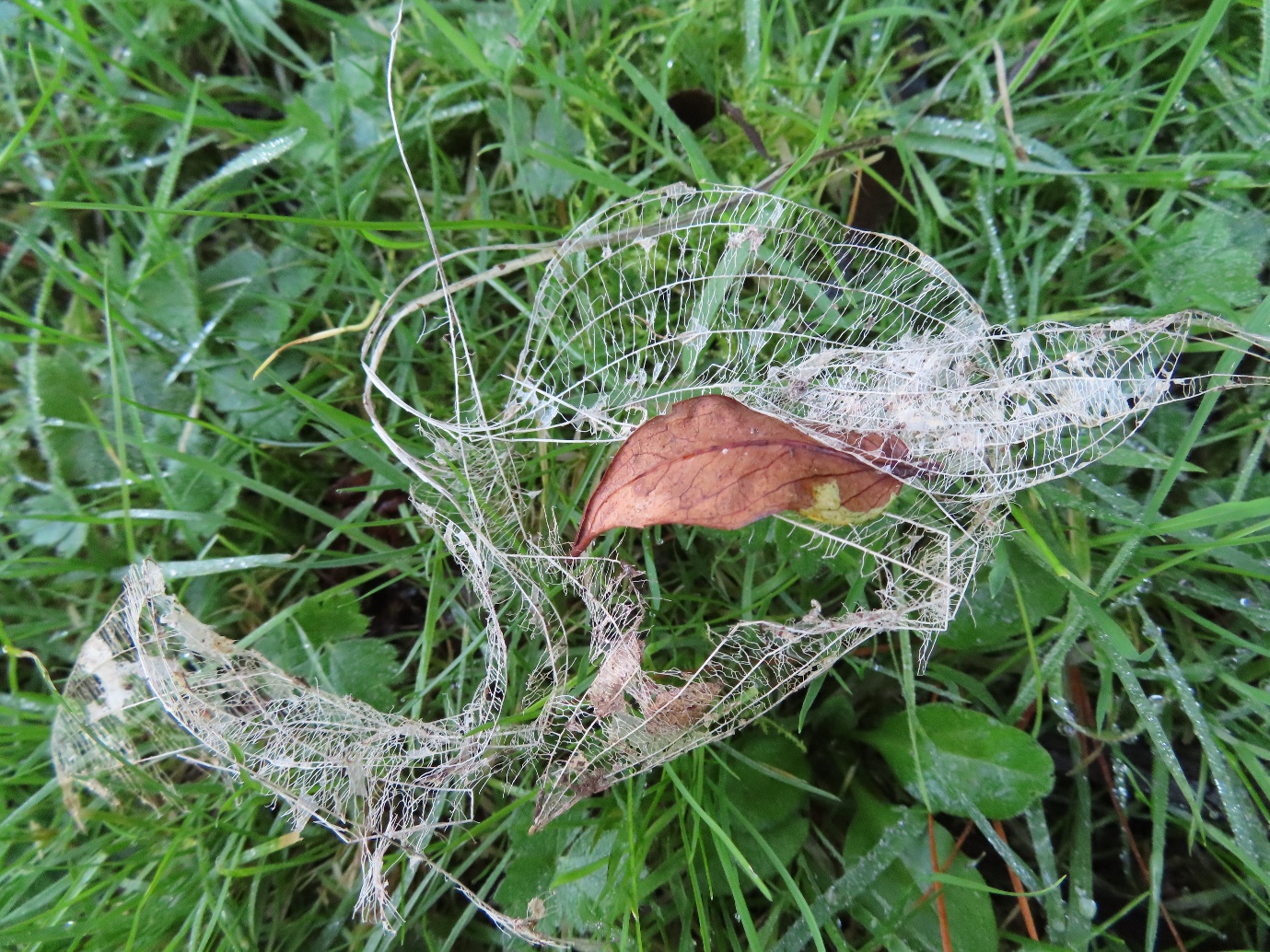 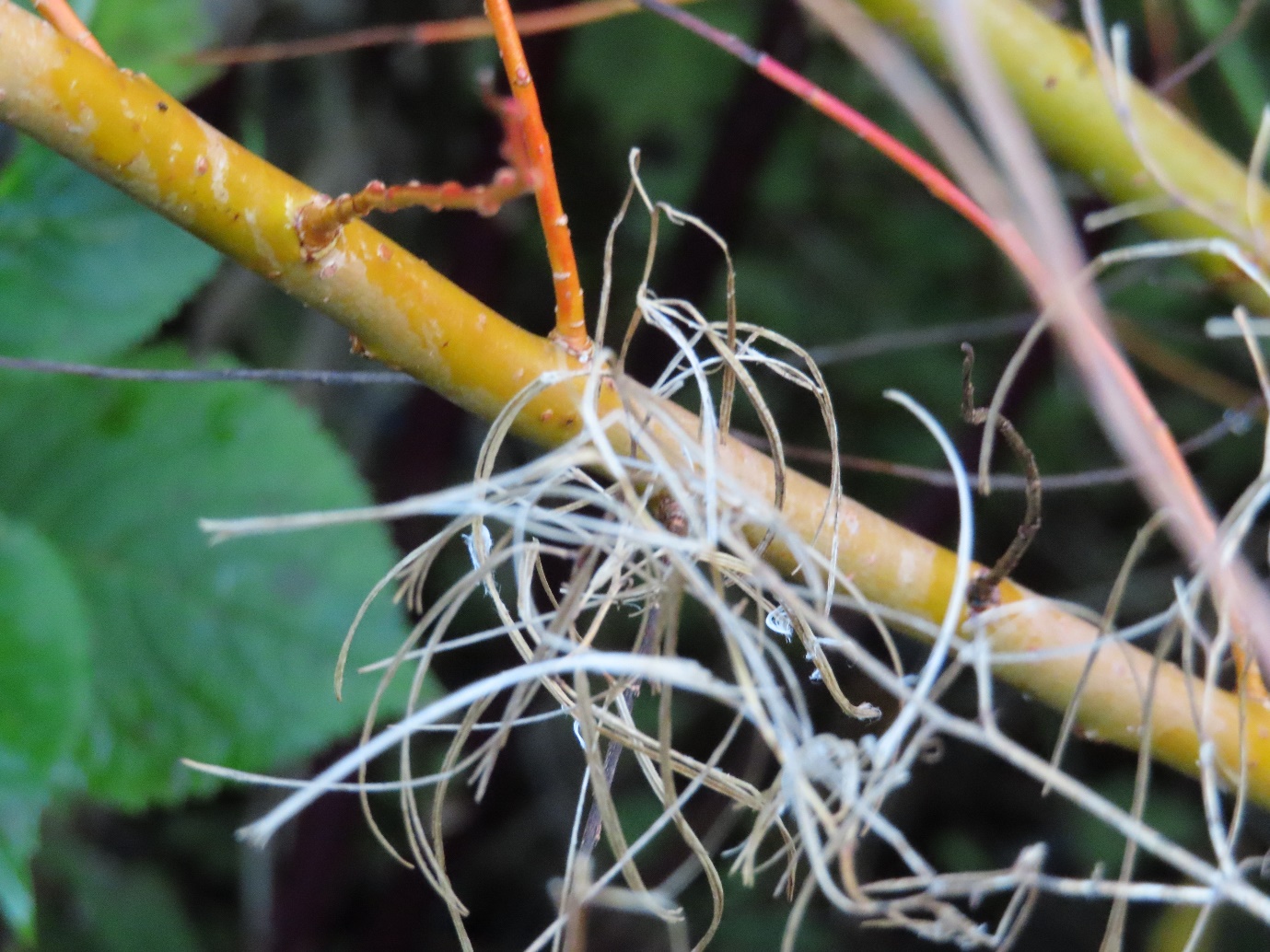 Some of the willowherbs are small enough to be missed when they flower, but make up for it with their tangle of seed heads in Autumn. I have a number of different varieties which are allowed to thrive in the garden and they are easy to contain if they seem to be taking over from other wildflowers. 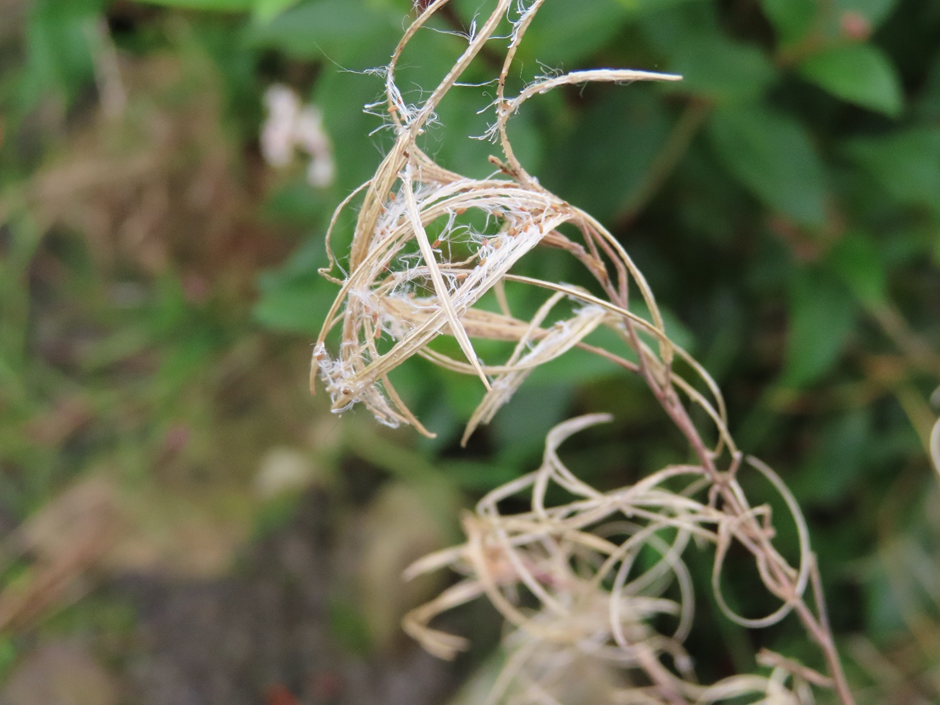 Another willowherb looking like a prehistoric animal ready to pounce.

Now that most of the leaves have gone the beauty of the tree trunks and branches becomes obvious. This birch Betula ermanii is covered in an elaborate design created by the silver lichen which covers most of the trees in the garden. As it is a sign of clean air and does not harm the plant it is a double bonus on a winter’s day. 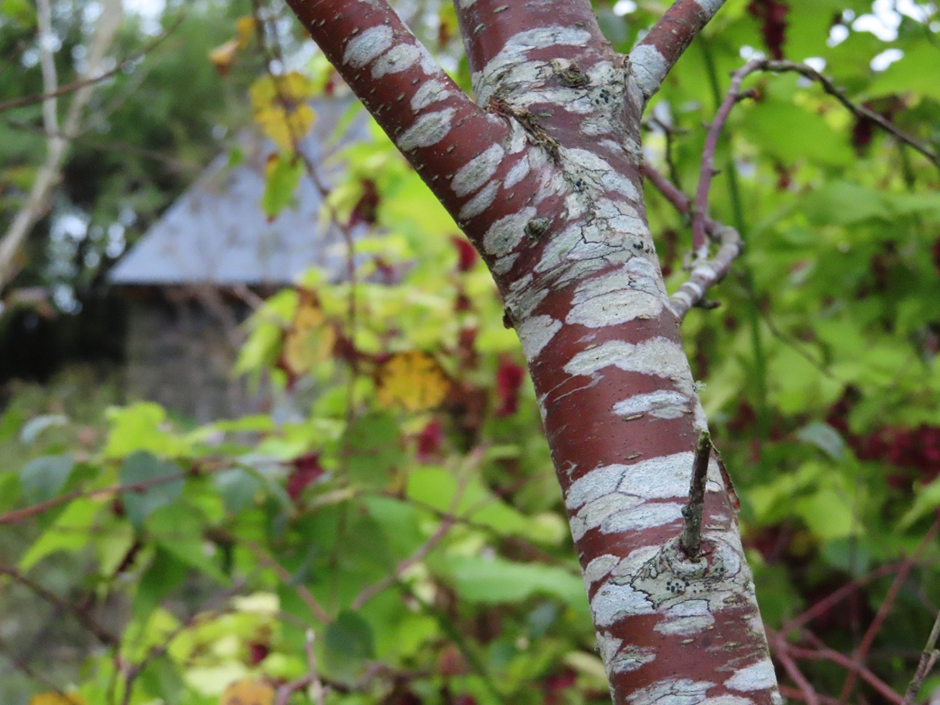 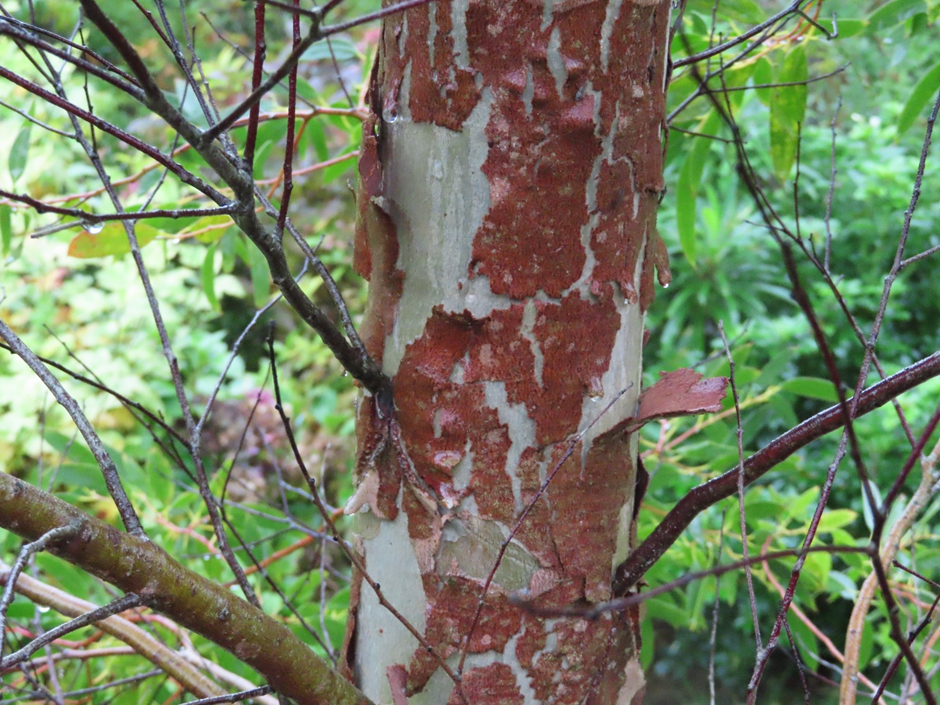 Eucalyptus do very well here and I am adding to the varieties each year. They grow very fast and, in a year or so, show the dramatic effect of the peeling bark. Most of them also respond well to coppicing which may become necessary if they are troubled by the regular gales here. 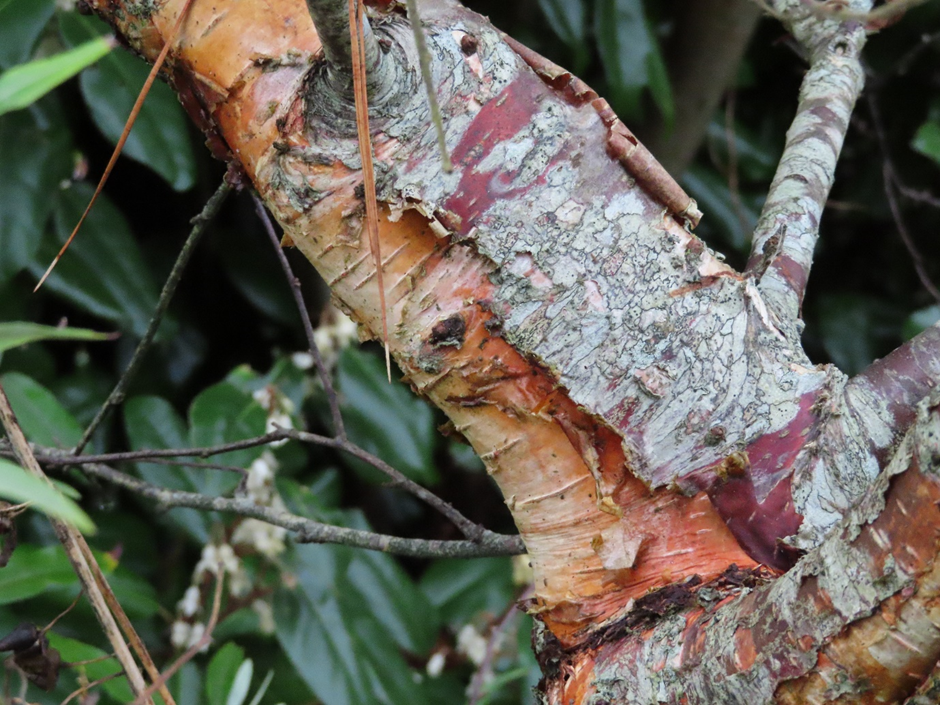 Another birch revealing its new skin at the end of the season. 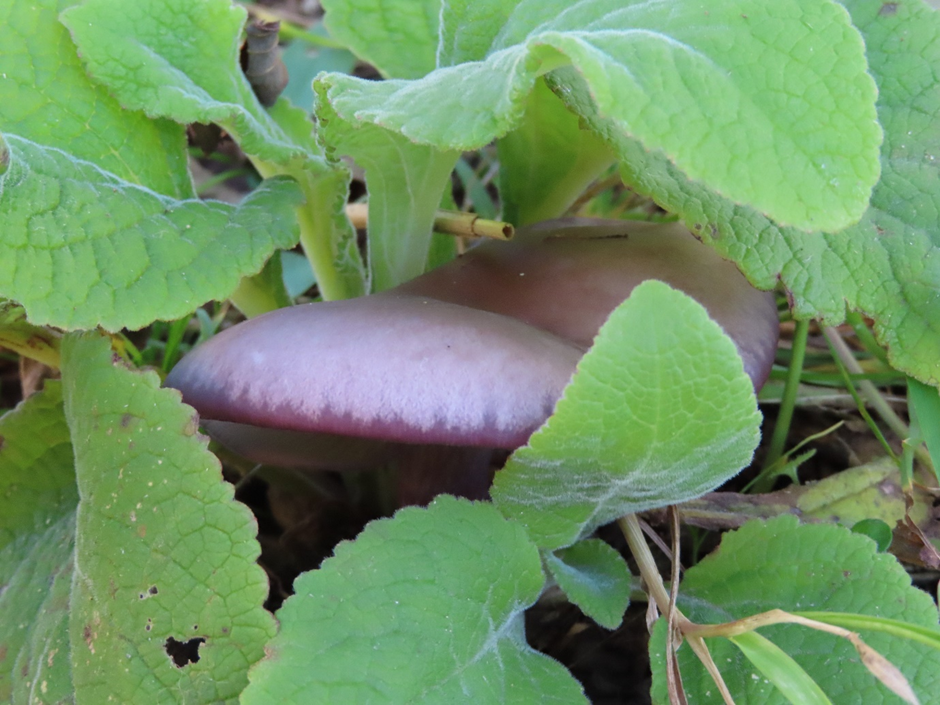 My fungi count is now up to 32 varieties. I have identified just five or six with full confidence. A new and beautiful one to the garden is the Wood Blewit. There are now dozens of these gracing the bank behind the house. This one is growing in the middle of some foxglove plants which adds to its charm. 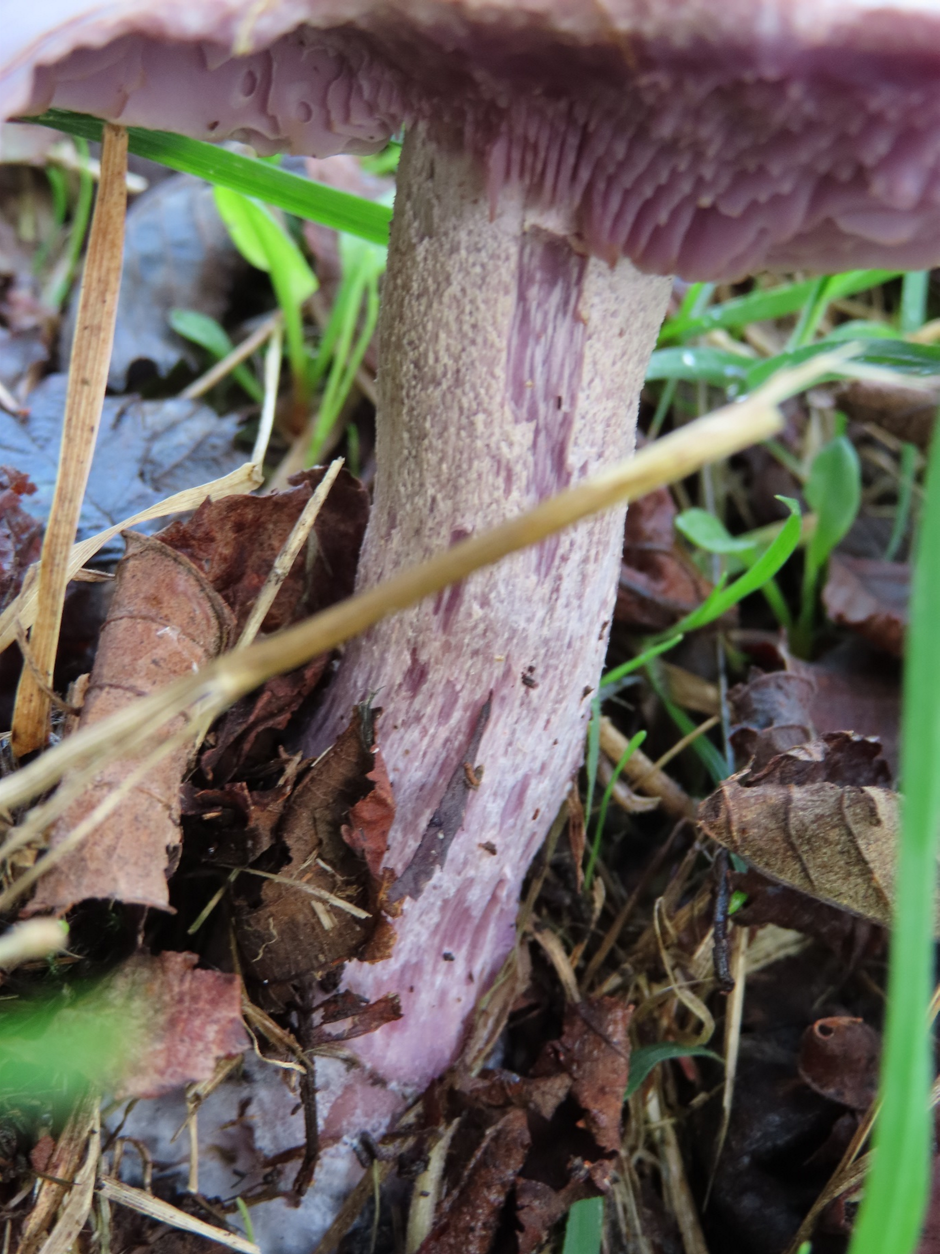 Details of a wood blewit showing its distinctive lilac stem.

Despite my failures in identification, I am learning something as I pore over the books and excellent fungi websites. For example, the fungus below is a puffball with the round hole at the top where the spores are released in burst. 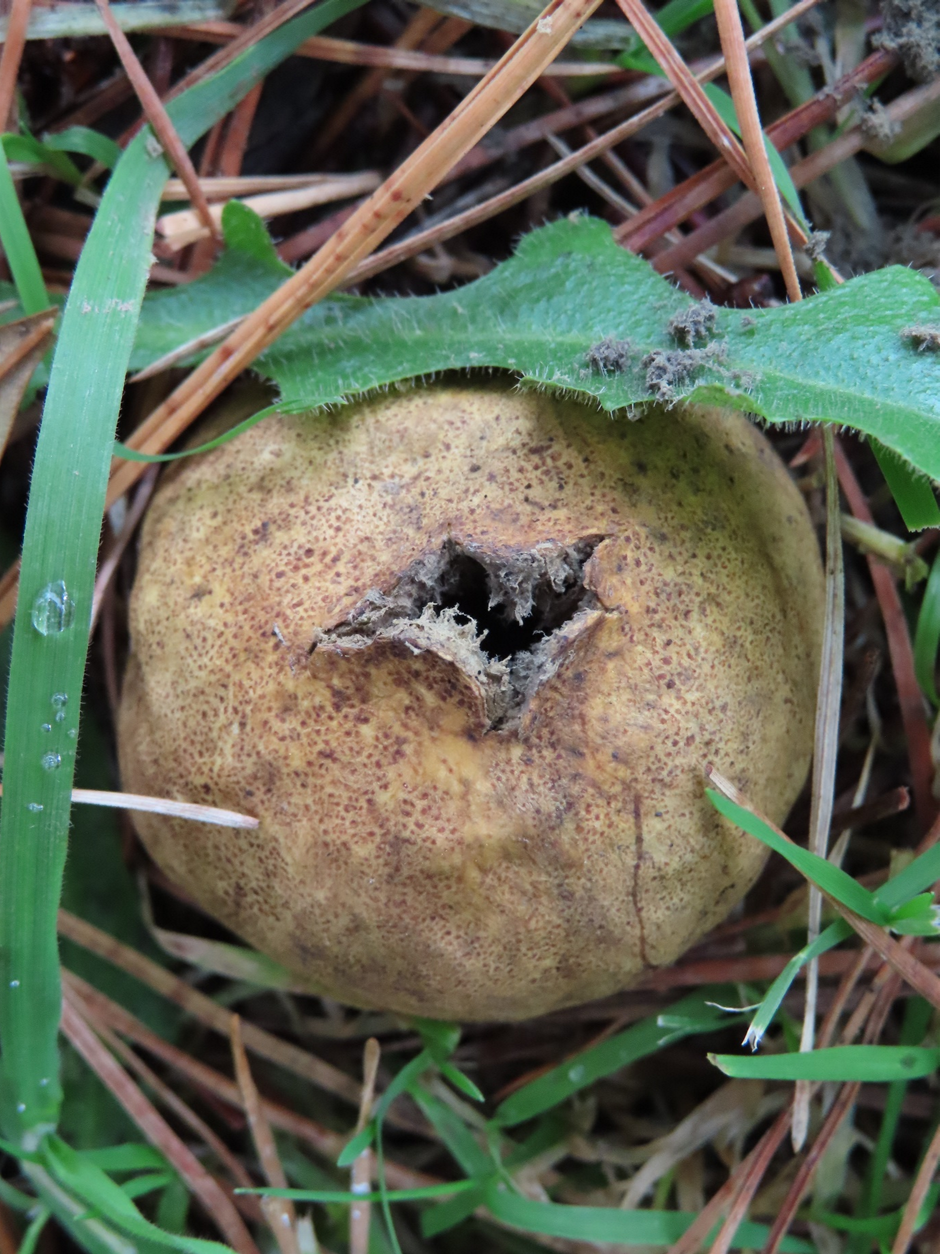 On the other hand, the specimen below is an earthball which splits open to release its spores. 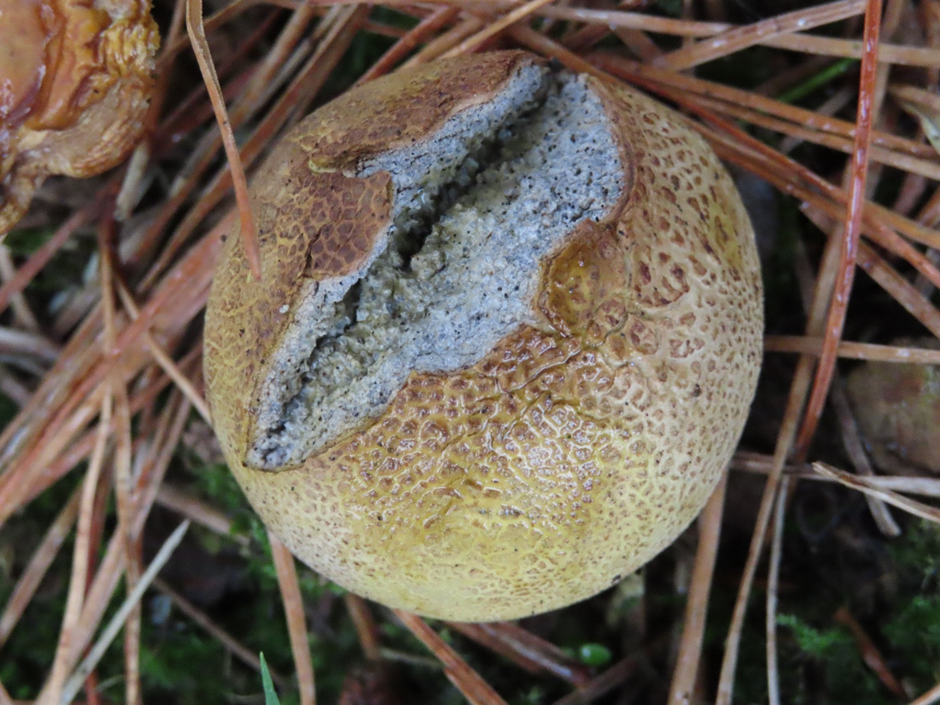 Now that the important task of setting up the bird feeders is complete, I am taking on the equally enjoyable task of choosing bareroot trees for planting in the field and in the garden proper. Given the freezing weather it is good that this task can be done indoors. Although it has been cold it has been relatively calm although this may change next week and my yearly task of making the garden as secure as possible is on the horizon. If nothing else does this will force me to brave the cold and work outdoors again.