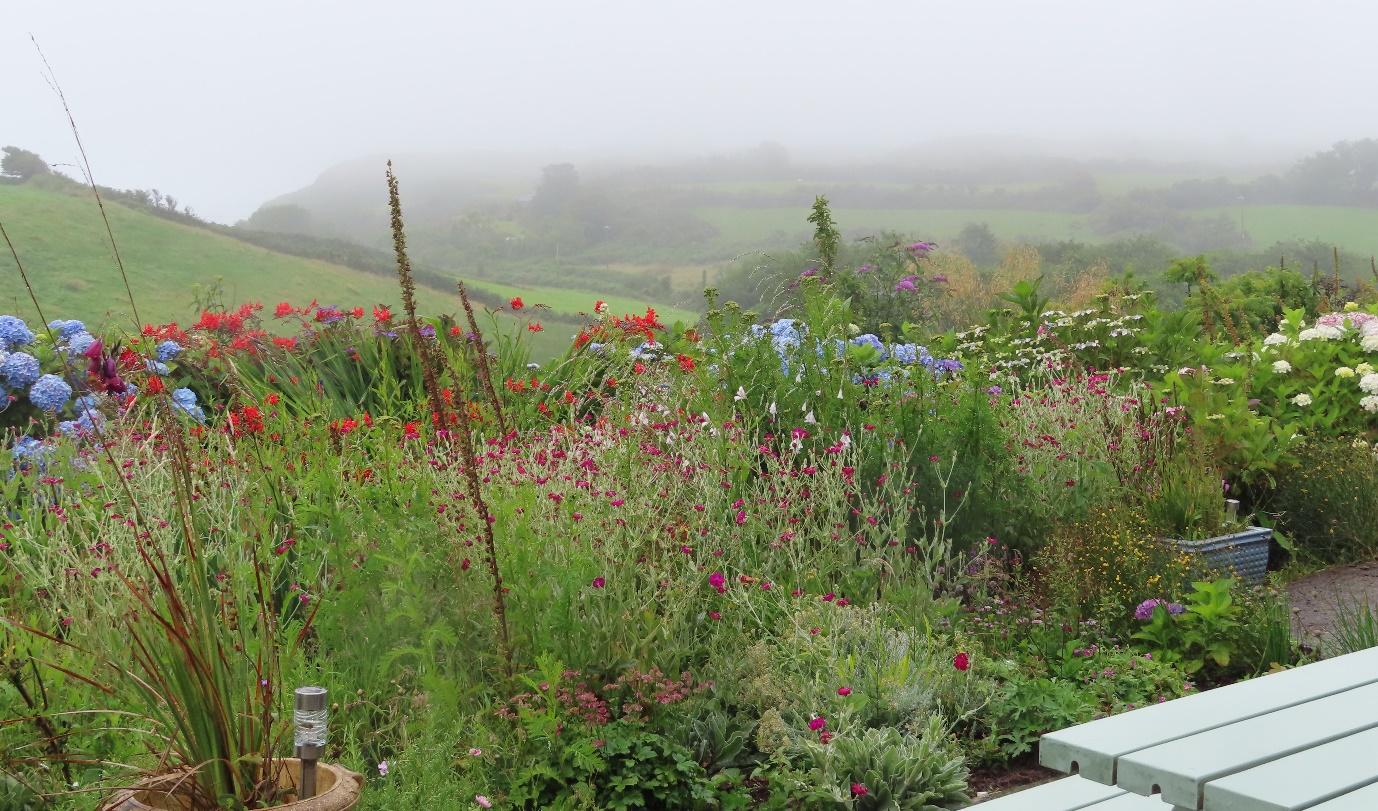 The wind is howling in the chimney, I am trying to decide between lighting the stove or putting on the central heating, and outside ‘blight-inducing’ rain and mist are battling for dominance. It is hard to believe that it is early July. The rain is not unwelcome, but the near gale force winds are becoming a pattern and my garden is suffering. In the last few weeks my two gooseberry bushes, three redcurrant bushes and one blackcurrant bush have been totally stripped of their leaves. It is as if the wind is coming through a funnel, as their neighbours seem relatively untouched. I suspect that the bushes will recover, but the outcome is that the fruit is totally exposed and standing out like a neon light for the blackbirds to see. They are taking full advantage of this and almost live in the fruit garden. Whenever I go to pick some for myself, they remain in nearby bushes clucking indignantly. It is very obvious who has ownership of the fruit.

I am happy to sacrifice the view across the bay and have planted a row of Crataegus prunifolia on the southern boundary of this little garden but it will be a few years before they provide shelter from the most damaging southerly winds. In the last few months, we have had salt storms, days of near gale force winds, weeks without rain followed by a deluge, hot sultry days and nights with temperatures of just four degrees. The poor plants don’t seem to know which way is up. My peas and beans have taken the ‘hibernation’ approach and are not doing anything despite having adequate food and water. My previously very healthy courgette plants seem to have died. In the absence of a greenhouse or polytunnel I will struggle to have a variety of vegetables from my own garden. I spoke to a commercial, organic grower this week. She is having a very good indoor crop but as she described it the outdoor courgettes and other similar plants are ‘growing backwards’. An apt description of what is happening here. On the other hand, the horseradish plant has run wild. I have finally removed it from its current position and retained a few seedlings which I will plant in a container. I have cleaned and frozen a supply for sauce in the winter and will have to keep a keen eye on the place where the parent plant grew as I am certain that it will regenerate for many years to come. 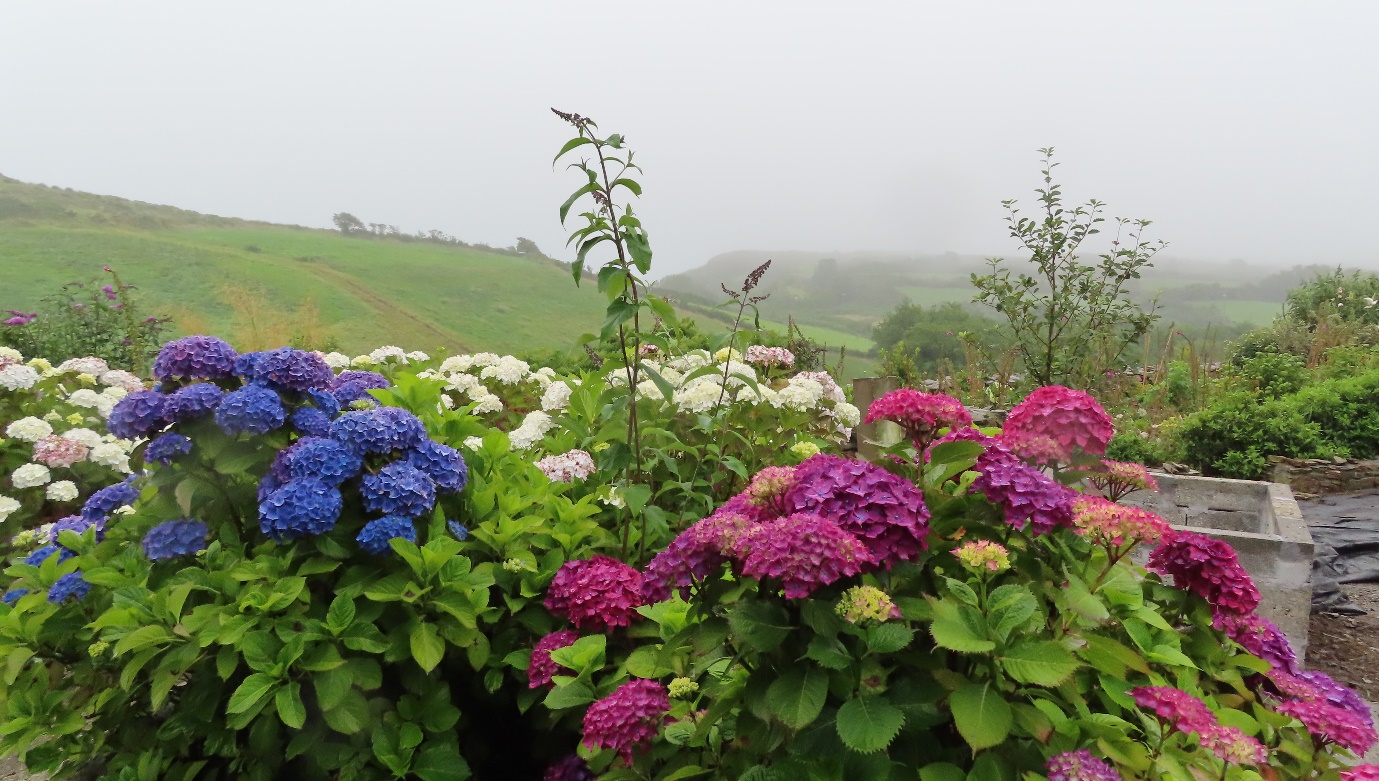 Even more alarming is the effect of the weather on some of my larger plants. My coppiced willows have grown over ten feet in three months. After the winds of last week some of these look as if an elephant has taken a rest in the middle of them. The branches are flat on the ground but unbroken. A similar fate has happened to some dogwoods and a spirea. I wonder if the early warm weather caused a growth spurt leaving the branches tall but weak. My potatoes appear to have done well and are not showing any signs of blight despite the weather. Now all that I have to do is remove the extensive barricades set up to deter dogs and other foragers to retrieve the crop. 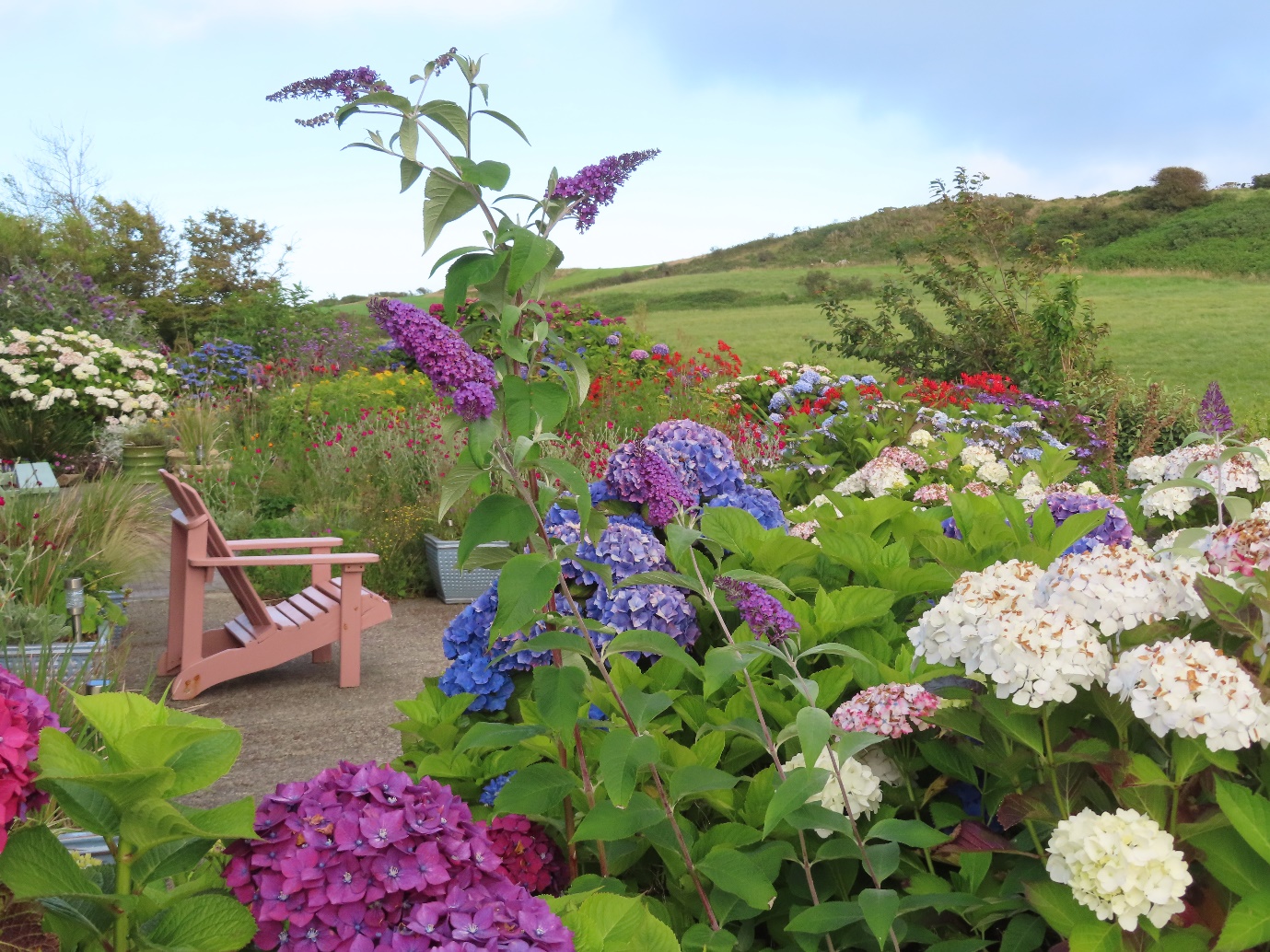 This is a rather grand term for the small space in front of the house which I have ringed with Hydrangea for protection. The plants have taken on a life of their own. Many of the original herbaceous plants have not survived the winters but those that do flourish with reckless abandonment. My careful plan to provide an ordered selection of muted coloured plants has been thrown to the winds and the area is now a riot of colours. I no longer see these as clashing and am happy to let survivors take over. The new hydrangeas have joined the three original plants that were in the garden when I arrived. They seem indestructible despite being in one of the most exposed parts of the garden and the cuttings that I have taken from them are now healthy plants dotted around the garden. 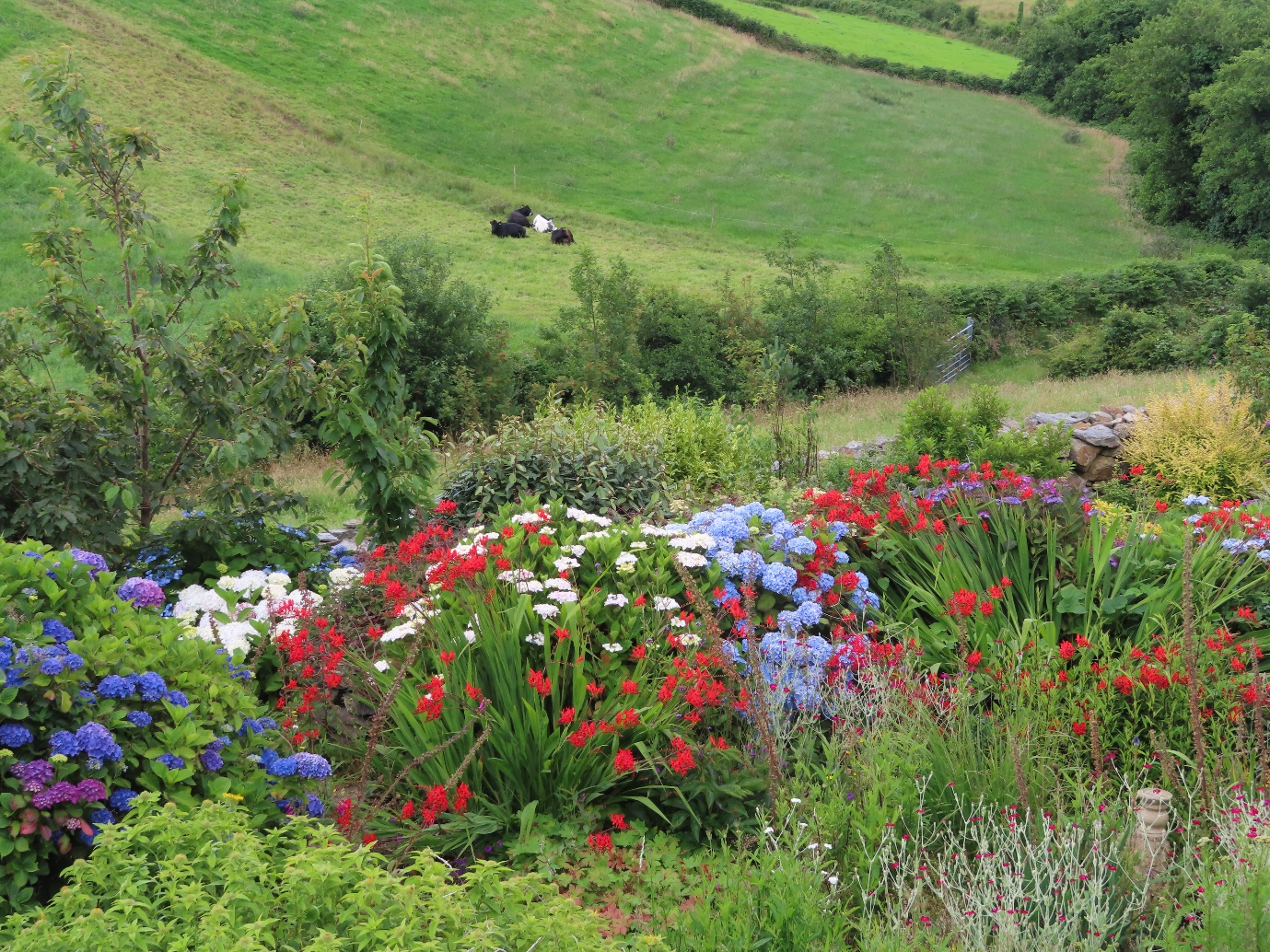 Looking over the herbaceous garden looking towards the south west. Lychnus and crocosmia Lucifer dominate this month and the hydrangea provide a striking contrast. 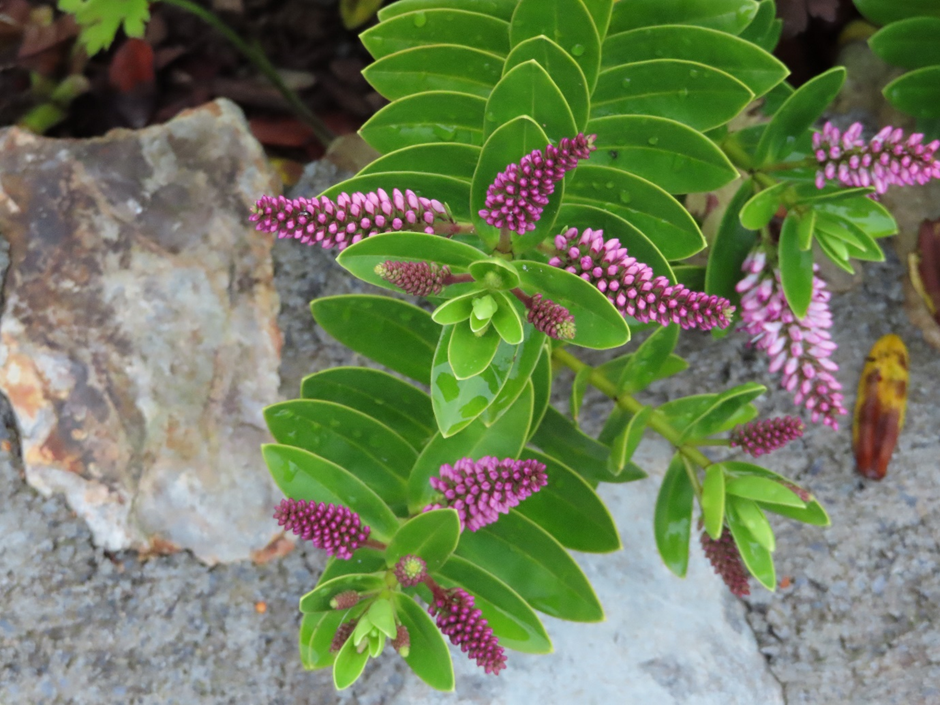 Hebe are well known as good costal shrubs so I was surprised that I have had a few casualties over the years. In the usual contradictory nature of the garden here they have done very well this year. Below is a photograph of a shrubbery that I planted on the bare hillside five years ago. The Hebe have taken on a lovely shape and are enhanced by the wild carrot which is seeding itself everywhere. Maybe I should consider these for the herbaceous garden although I suspect that any attempts to try to control them will result in failure. 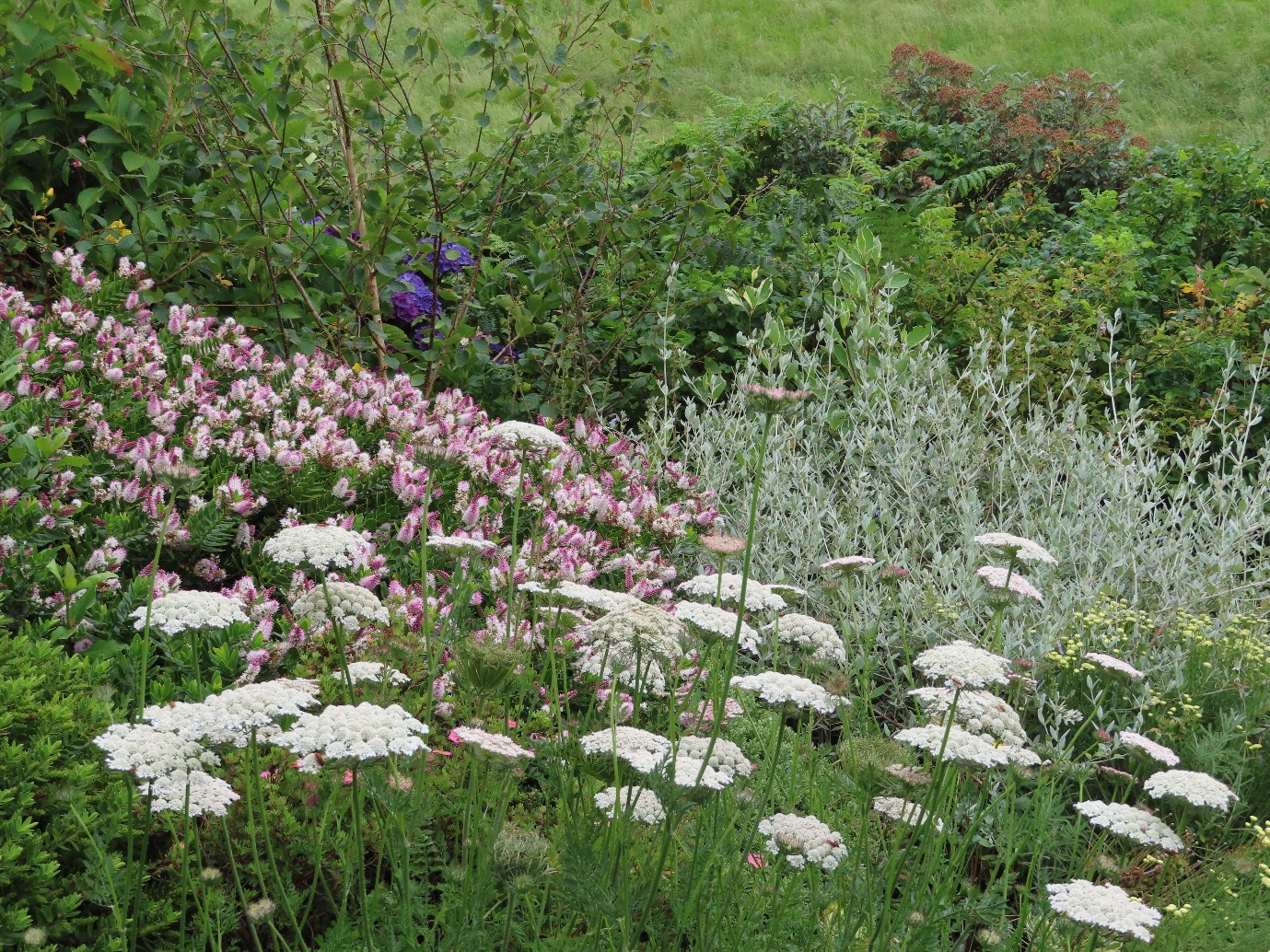 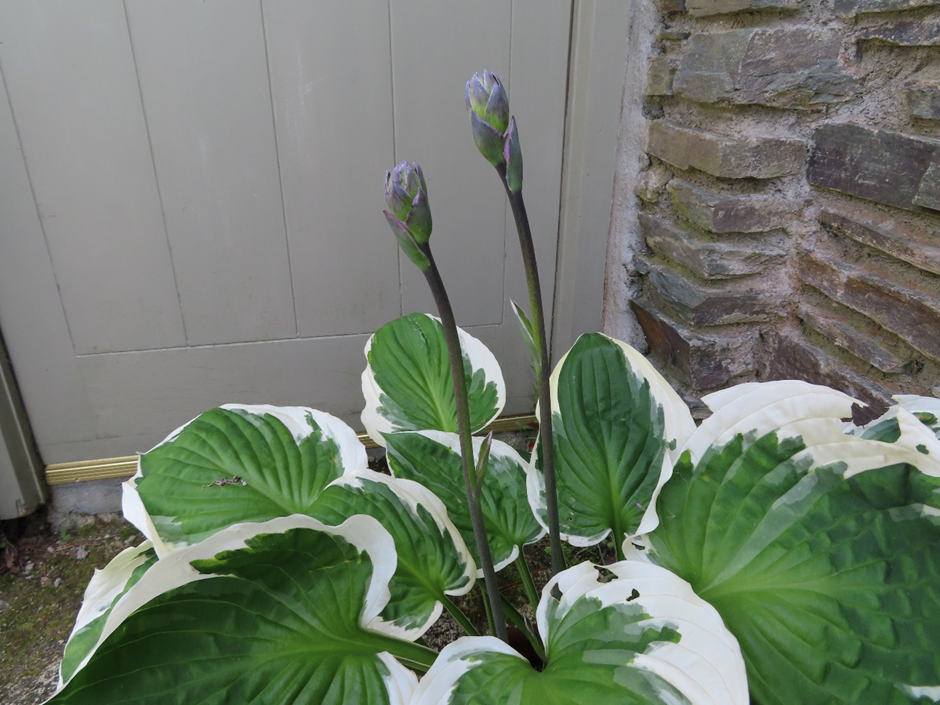 Almost all of my Hosta are placed in the shade at the back of the house and really seem to like the setting however, my battle with slugs continues. I have three organic methods to try and keep the slugs away without killing them. The first is the use of the organic spray for slugs and snails produced by Grazers and Co. I have also placed some pots in trays which tend to fill with water whenever it is raining. Other pots are raised off the ground on stones as they are too big to fit into any tray. It requires more time to complete my experiment so I am not sure if any of these methods have been a particular success or if the slugs prefer certain plants but I do notice that the variegated varieties are almost untouched. Sadly, the variety shown in my previous blog is still looking like shredded wheat albeit with lovely stems of flowers on top. This is in spite of it receiving a spray of Grazers. I also have two identical pots side by side, one in a tray and one in a pot off the ground. To my eye it looks as if the former is relatively unscathed compared to its neighbour.

This extraordinary creature appeared outside my back door this evening. Over four inches long I thought it was a lizard at first. My heart sank at the thought that it was on the way to dine on the Hosta and might have friends and relatives following in its wake. Although I did not want it outside the house, I was sorry when the dogs dispatched it accidentally. I did have a moment when I wondered why I would even consider trying to defeat such a formidable looking foe but hoped that the slug would look less daunting in the morning. 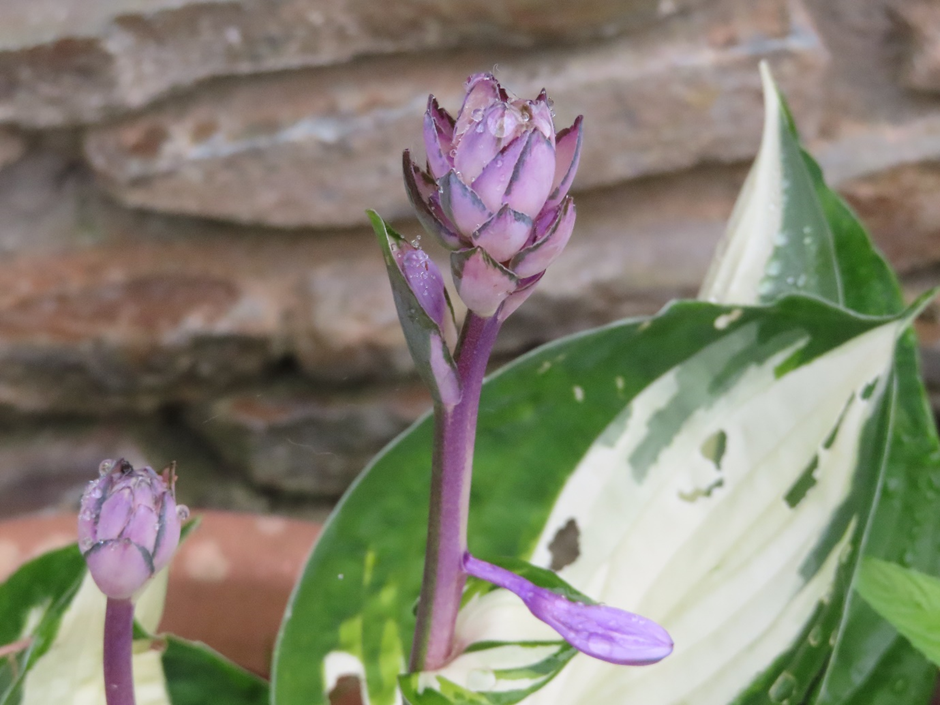 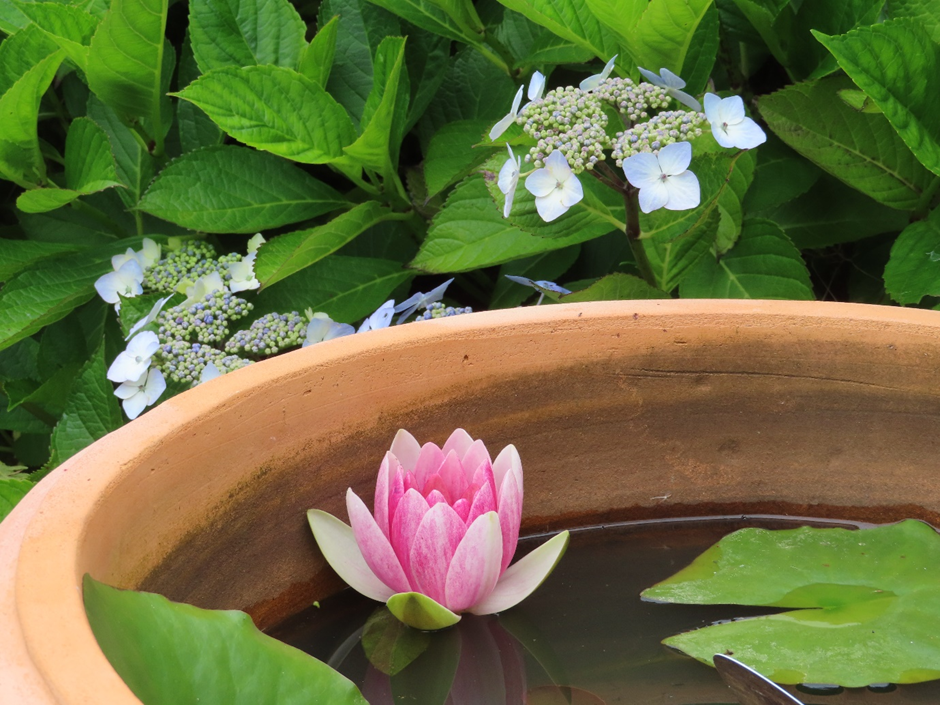 I have always wanted to have a pond which I could fill with water-lilies but resigned myself to the fact that placing a one on a steep hillside was an engineering feat too far. Some years ago, when visiting Thailand, I noticed that many shops had large pots outside the door with just one lily plant in each. I decided that this was the answer to my problem and as soon as I returned home, I bought a large pot and a rather expensive lily. If truth be told I had no expectation that the experiment would work so I was very pleasantly surprised this week to find a single flower ready to blossom in my makeshift ‘pond’. I have already started to work out how I can add to my ‘collection’ even if I have to wait until next year. 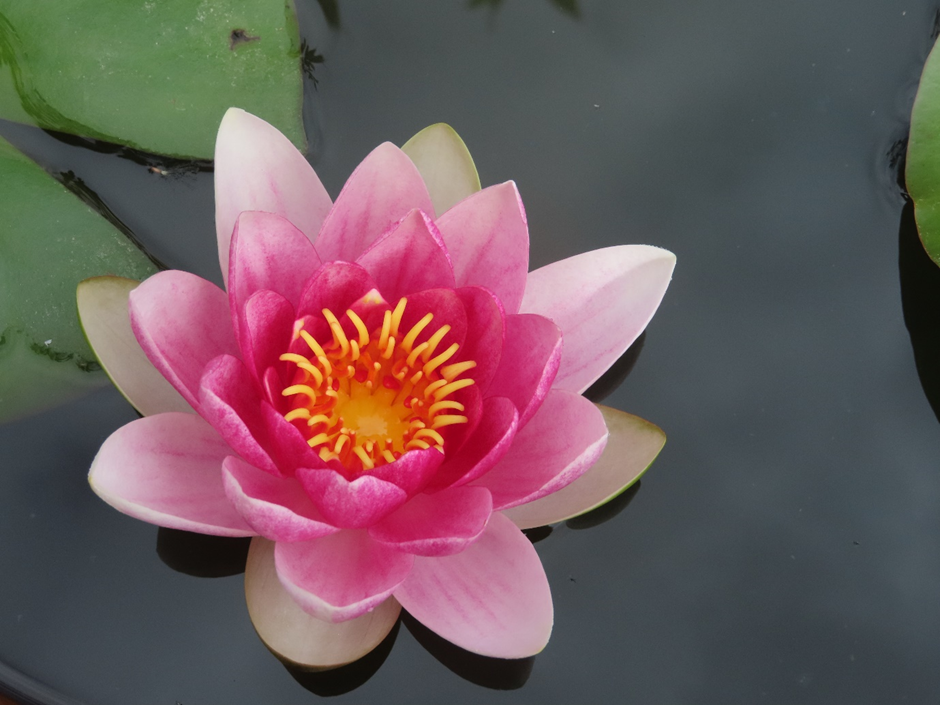 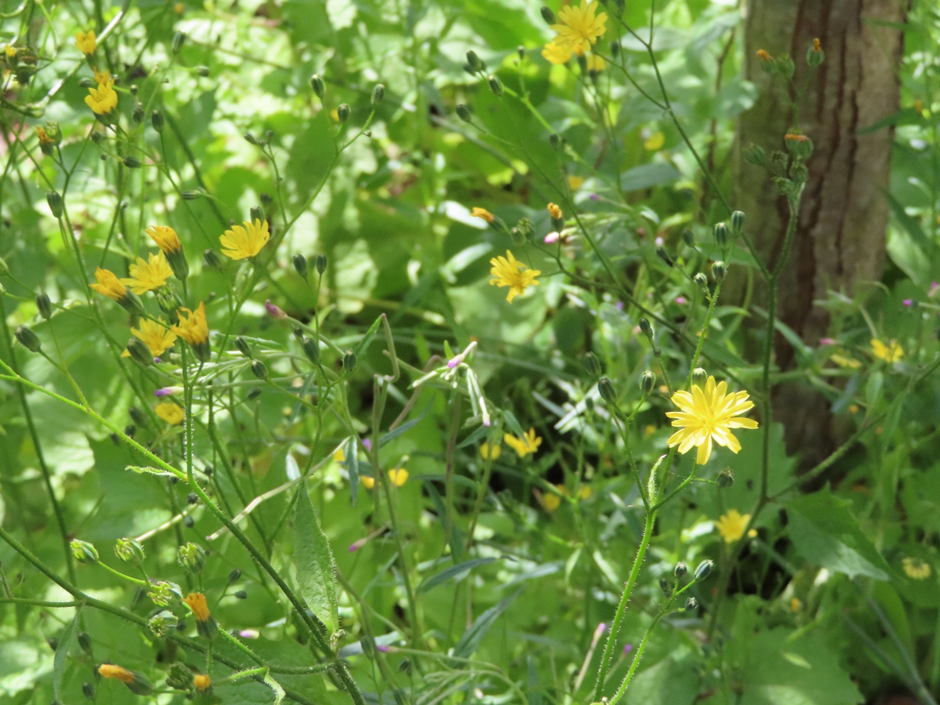 In the encylopedia of wild flowers Akeroyd describes examples of a plant ‘providing’ herbal remedies based on the ‘doctrine of signatures’. That is plants were ascribed medicinal properties based on the similarities between them and the organ that people wanted to treat rather than on the properties of the plant itself. Nipplewort is one such plant. On the other hand Self Heal Prunella vulgaris, a member of the mint family, has a long history of usage to staunch and heal wounds. It is a biennial plant and can produce a large carpet of vivid blue flowers throughout the summer if left to its own devices. 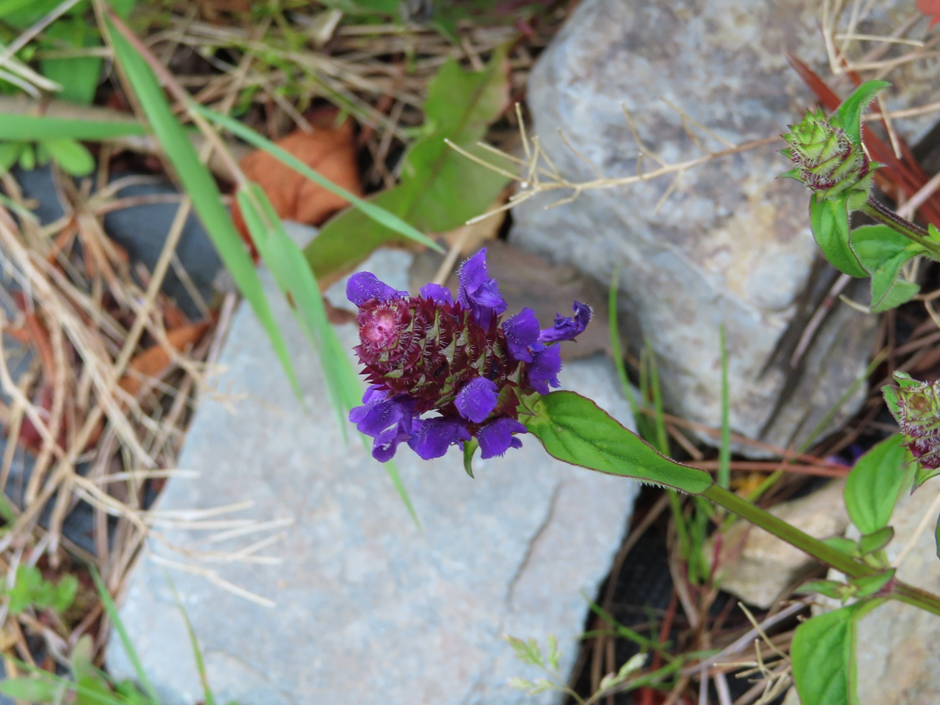 Common Figwort Scrophularia nodosa is not a very attractive plant but thrives in the shaded areas near the house. It is considered to be the ‘queen of Herbs’ and there is a long history of its medicinal usage to treat skin ailments, bruises and wounds. 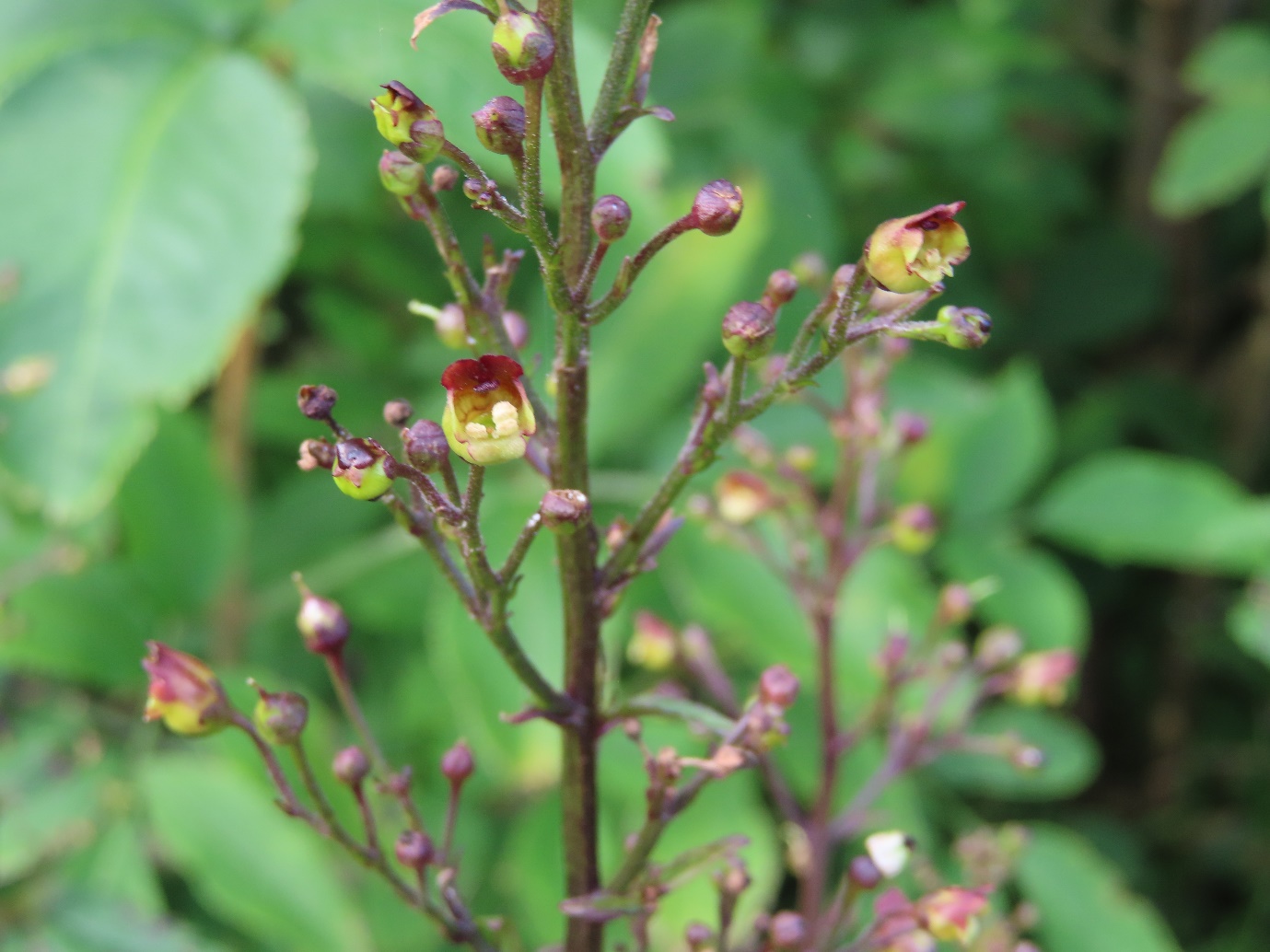 18 July 2020
It has been pouring here all morning. If it clears I hope to beat the blackbirds to the last of the blackcurrants. My chances are slim but optimism is important when gardening in this variable climate. At the worst I can be content that I have made a lot of blackbirds very happy. I can also be pleased that I have found the source of all the purple and red bird droppings on my patio. Success all round.