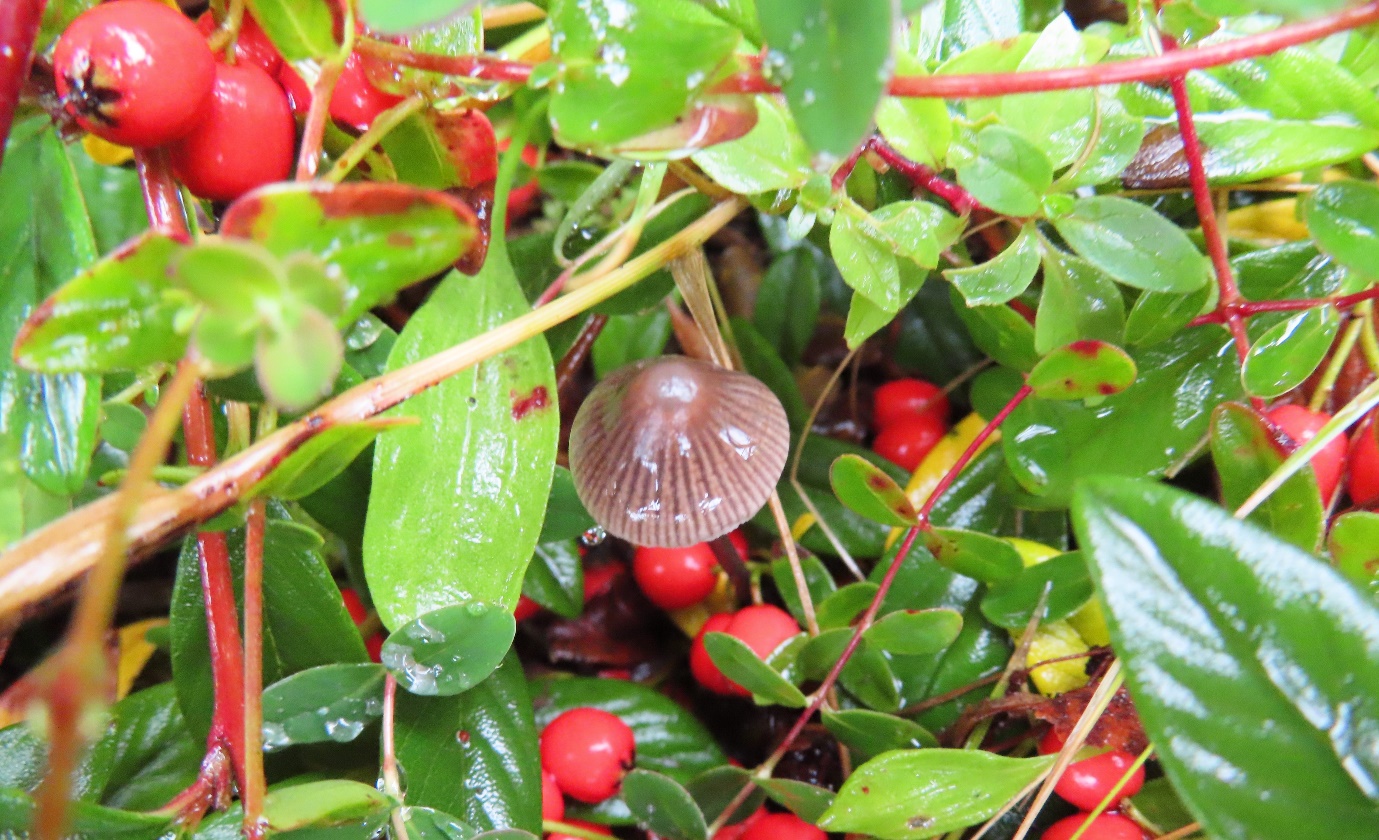 October was a relatively dry month all things considered and mushrooms were noticeable by their absence. This was disappointing, as I have had a full fairy ring on the driveway for three years in a row. Last year there were two intersecting rings with two different fungi species and I had high hopes for a repeat show. However, by the end of October, I had no expectation of seeing any fungi at all as the cold weather moved in. To my surprise the torrential rains which followed produced a flurry of growth and overnight mushrooms of all shapes and sizes appeared. 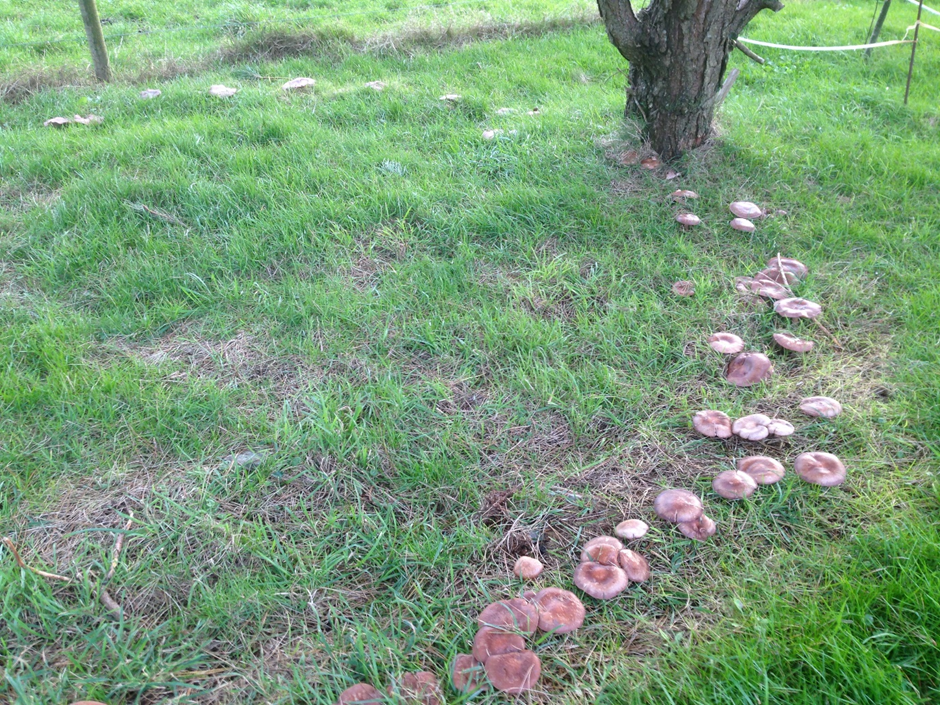 The single fairy ring in December 2017

I would be the first to admit that I know nothing about mushrooms, apart from the fact that you can make a dreadful mistake if you eat one that is poisonous. The sudden appearance of over fifteen varieties within a few days spurred me on to do some research in an attempt to identify them all. After days of searching and reading on the internet I have finally decided that it is far too broad a subject for me to study in just a few days. There are at least 5,500 known species in Ireland with an estimate of 9,000 species in total. The chances of correctly identifying edible mushrooms seem slim given how similar some species are. Identification is complicated and I would often think that I had ‘cracked it’ when the reference would say that you could only correctly identify the particular species by microscopic examination ‘preferably assisted by chemical tests’. The possibility of adverse effects ranging from gastric upsets, hallucinations or even death has convinced me that I should just appreciate what is growing in the garden and buy my wild mushrooms in a local health food shop. The following examples are just some of the varieties of mushroom that have appeared this year in my garden. 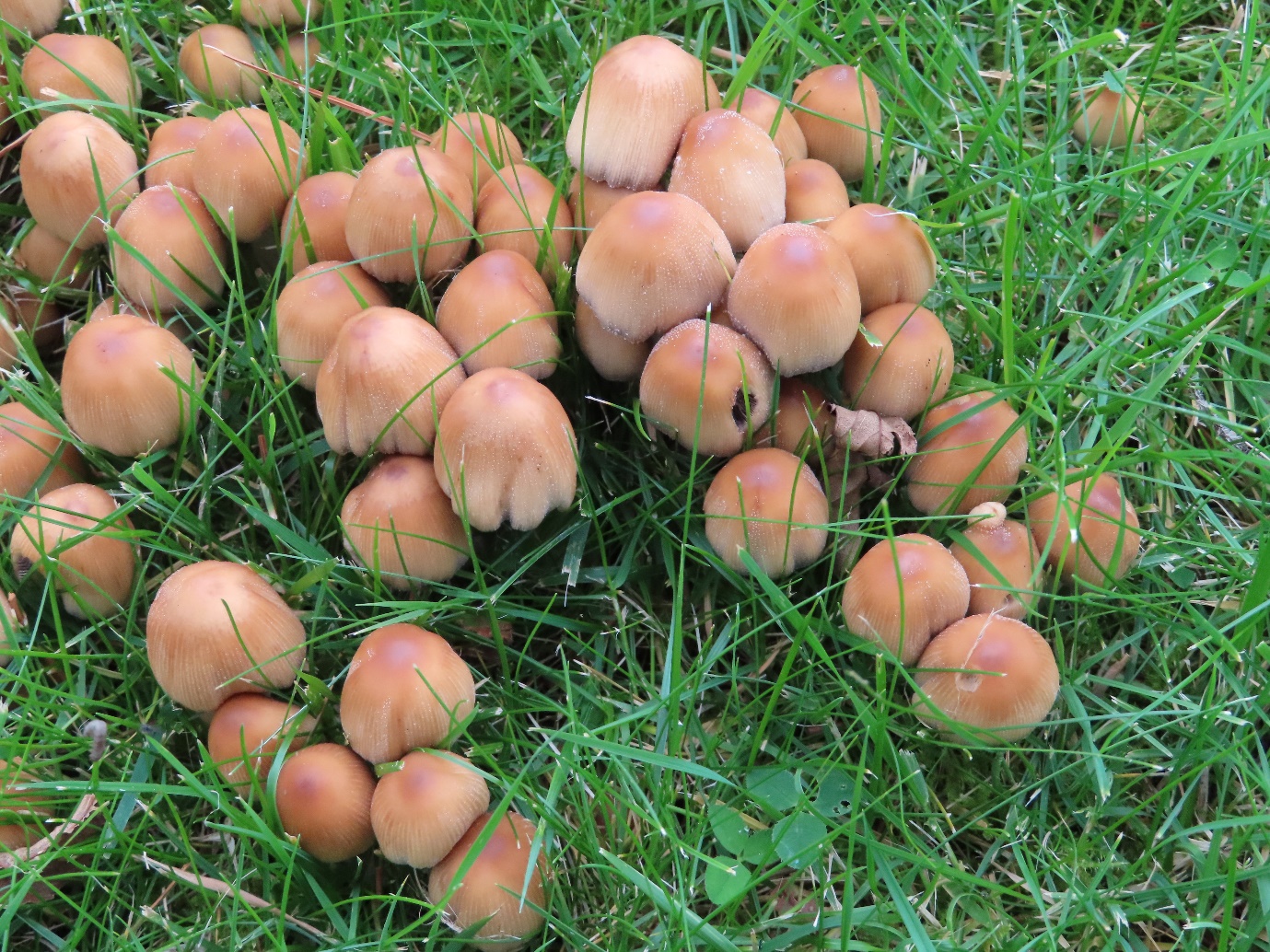 This cluster has appeared in the grass on a relatively shaded part of the drive in three different locations. I was surprised to see a fresh group just two days ago so these are not deterred by very cold weather. I think that they are Glistening Inkcap and that the cluster below may be a Common Inkcap. The latter were growing at the base of a willow tree where there is a lot of dead wood. 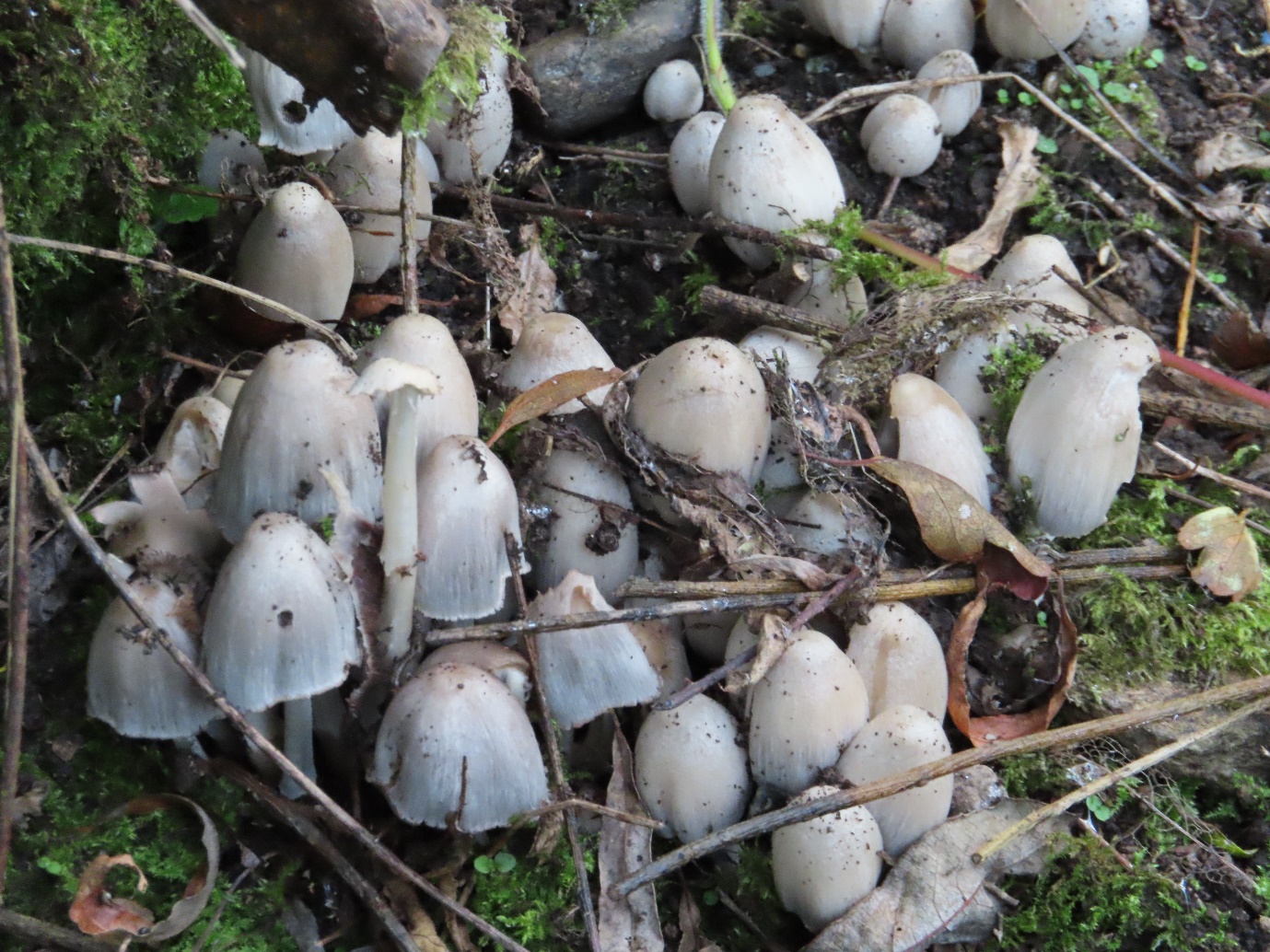 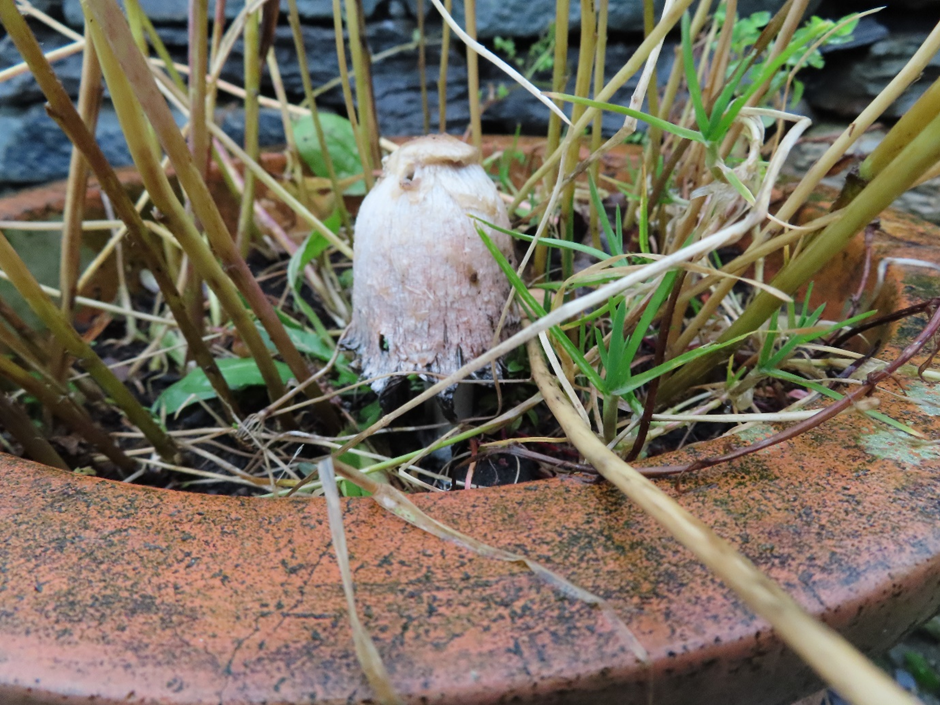 I am more confident of the identification of this Shaggy Inkcap as it was made by a knowledgeable friend. It is easy to see why it has the nickname Lawyer’s Wig. In the next photo you can see the start of the process of deliquescence, or auto digestion, where a dripping black, inky fluid is produced. This specimen grew in a pot that had previously hosted poppies and it is puzzling that there is only one. 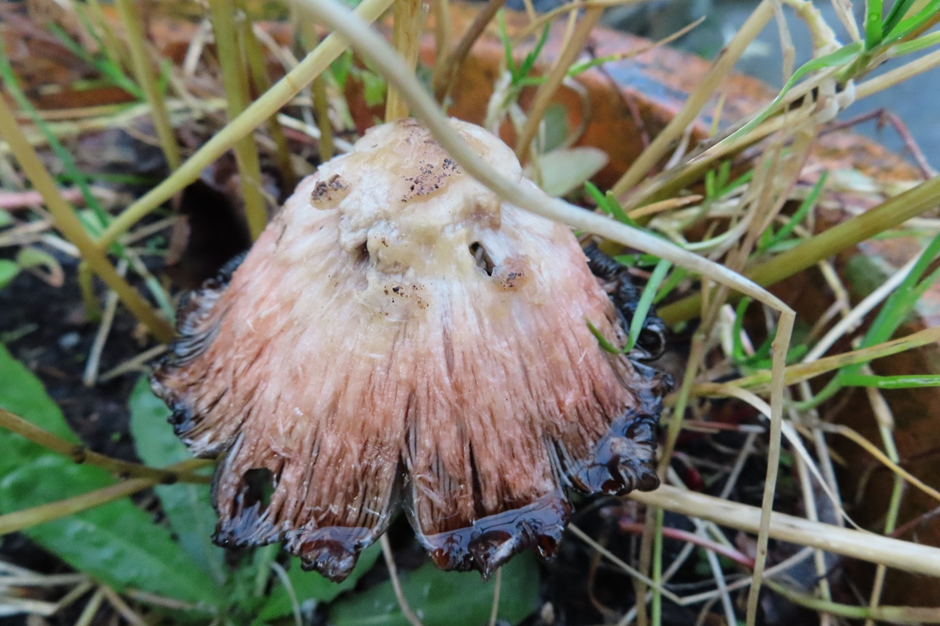 These are known as stomach fungi as the spores grow inside the body and released when the outer case splits. There are a number of varieties in the garden but I have not definitively identified any of them. 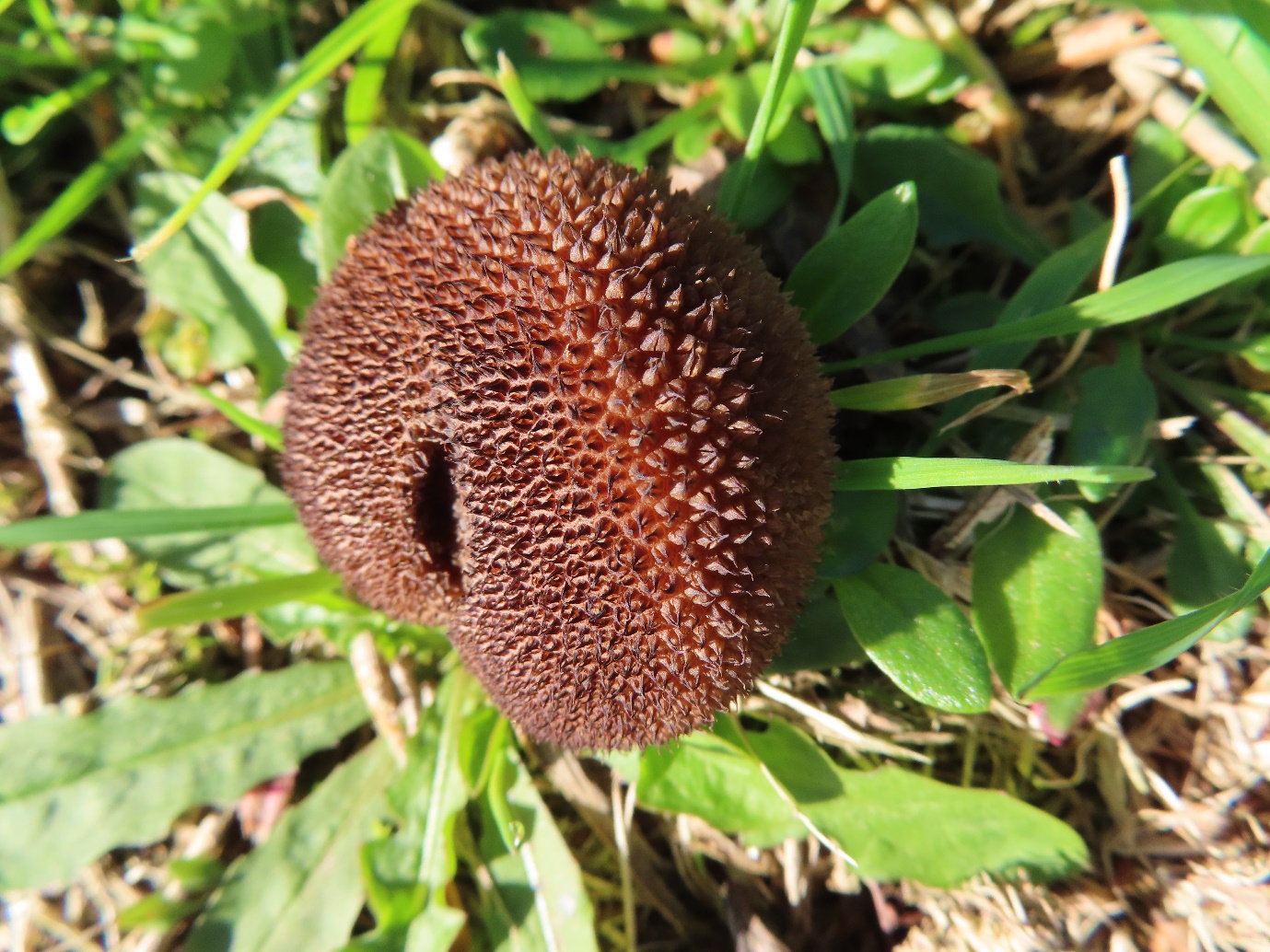 This odd creature grew in full sun in the middle of the short grass at the bottom of the driveway. It appears to be either a spiny or a dusty puffball although not one of the reference books mention the very vivid orange centre. 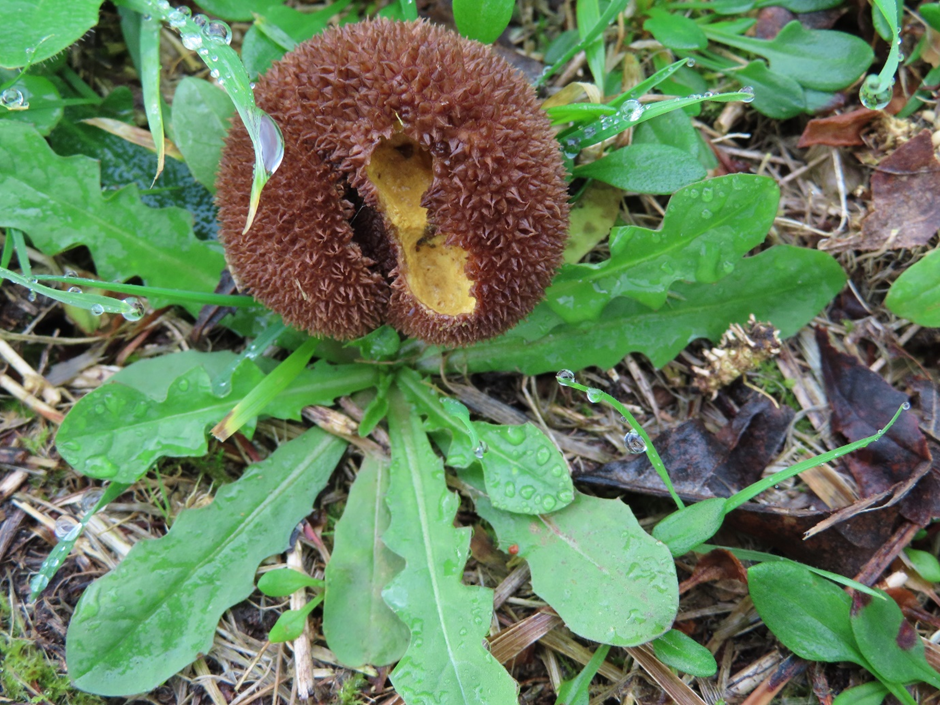 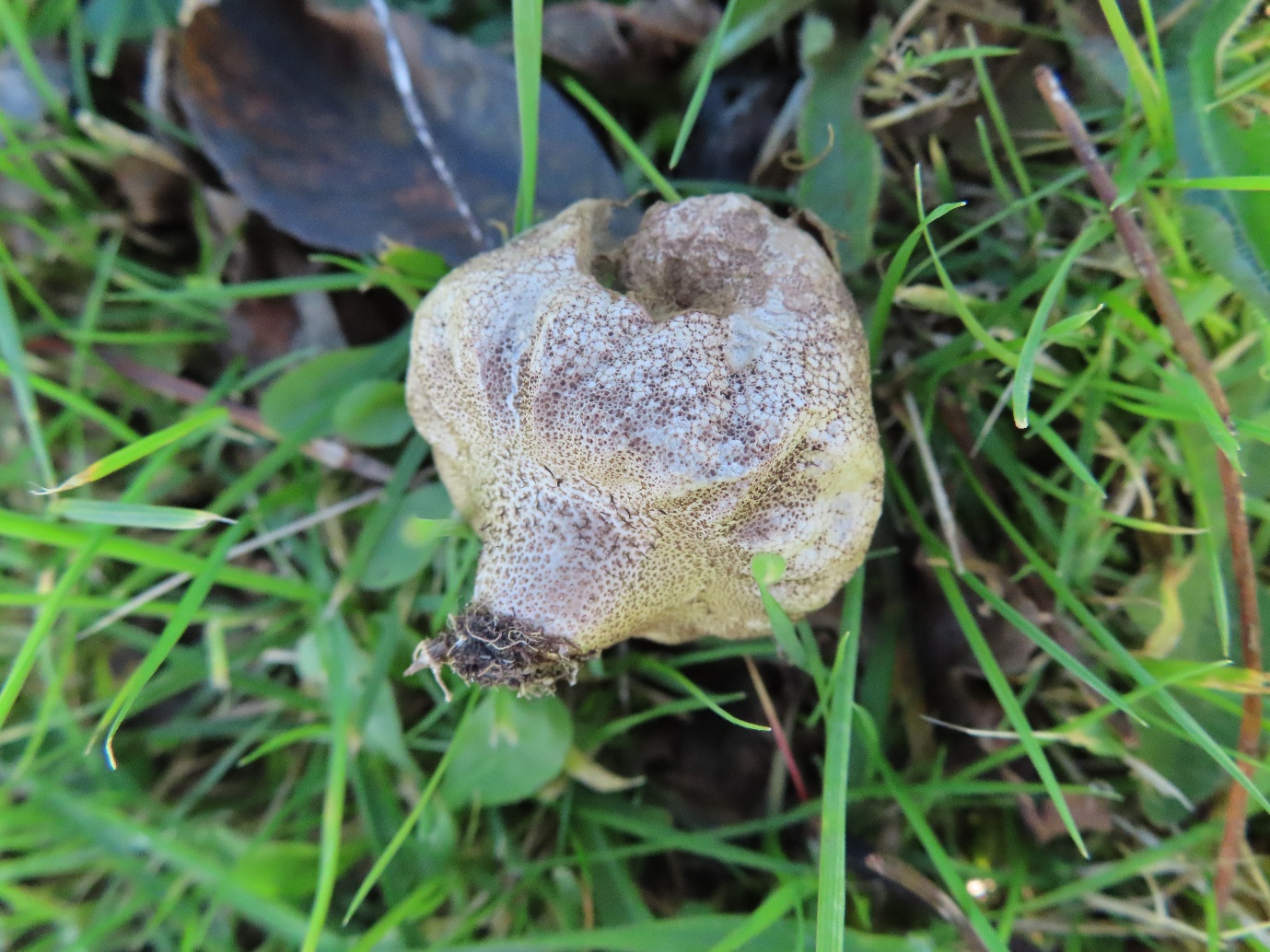 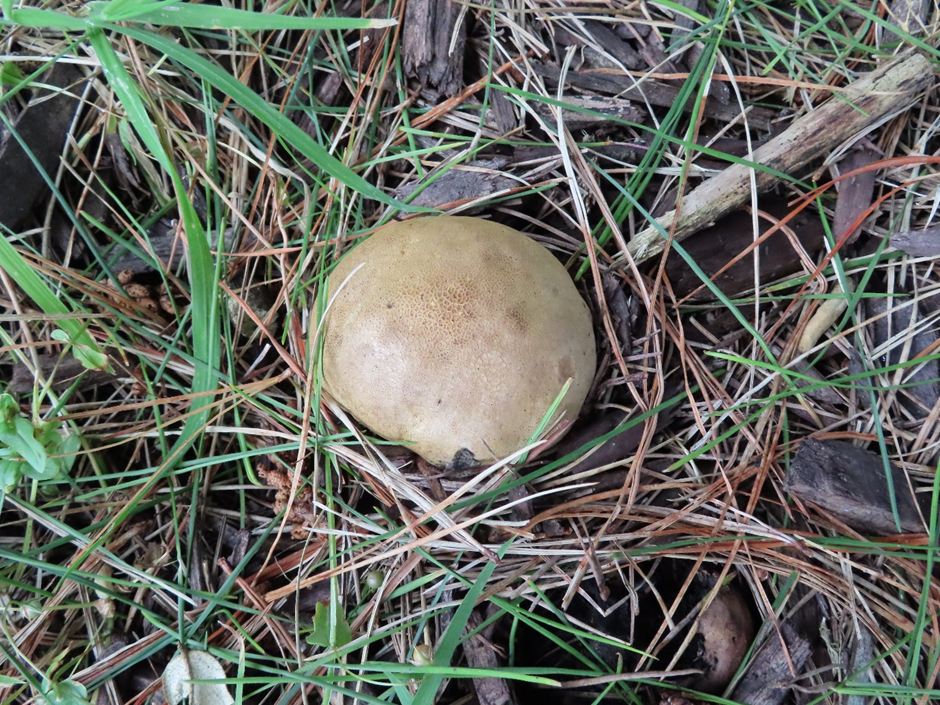 I had always assumed that mushrooms required dark and humid habitats to grow. This year I decided to leave the sunny, grassy area at the end of the drive well alone to allow wildflowers to emerge. There was a very colourful display throughout the summer and I finally cut the grass at the end of September. In October this area produced some of the most dramatic colour, but this time it was not flowers but fungi. There were at least two species of waxcaps in deep orange and yellow colours. 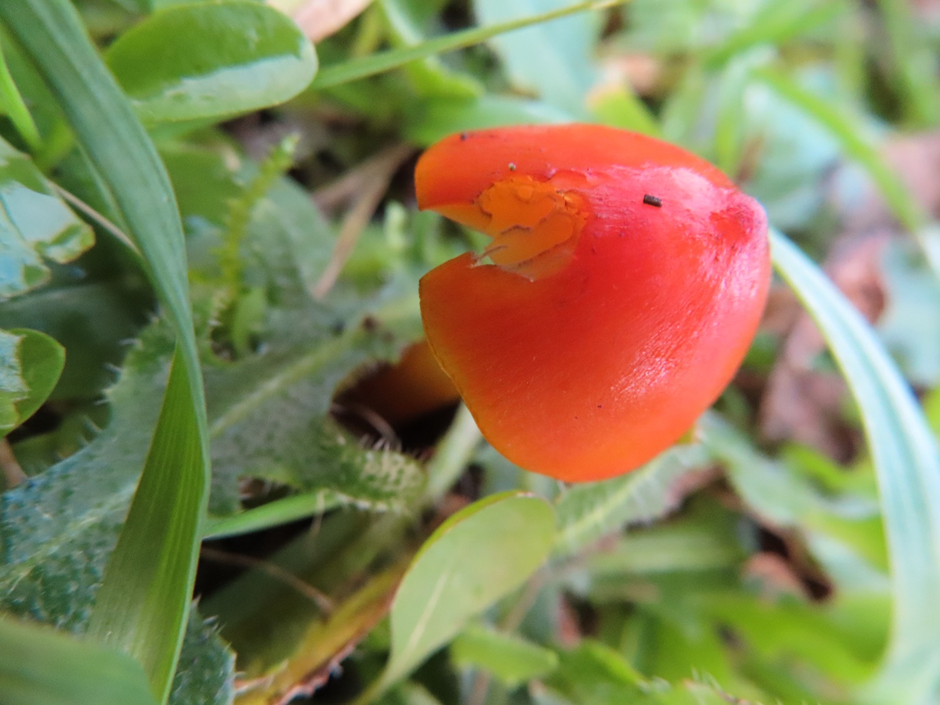 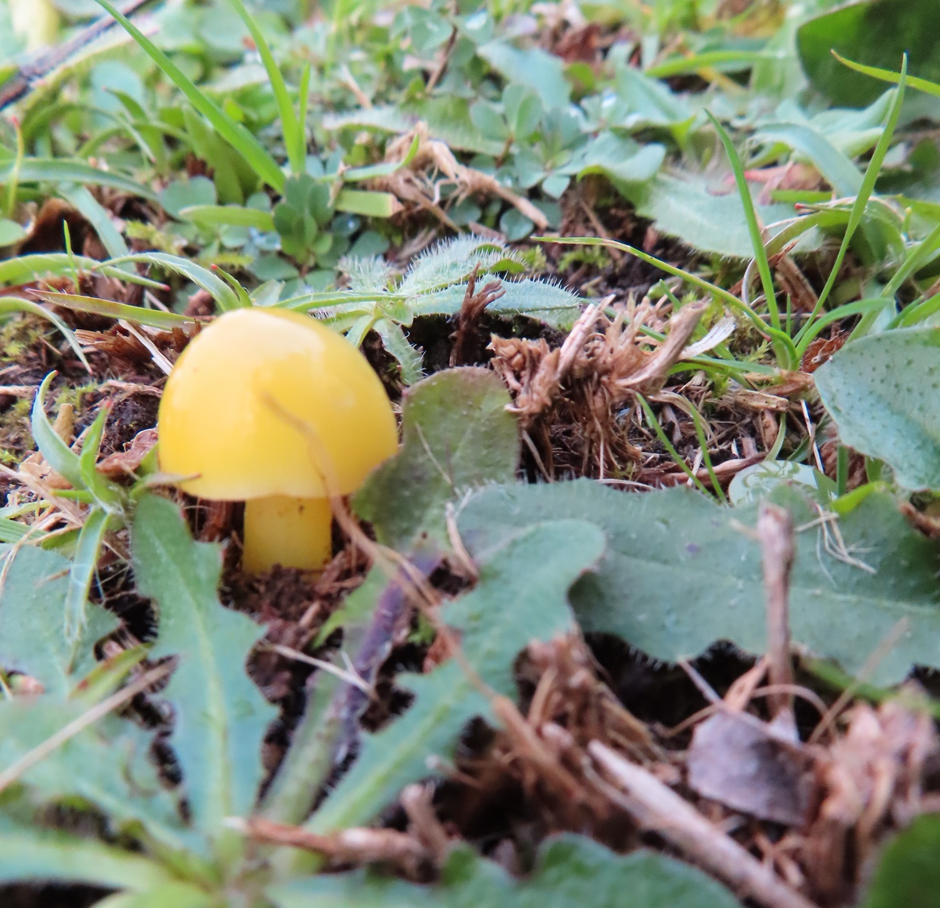 The same grassy area also produced lovely yellow and orange fungi although you had to lie on the grass to see them properly. I am assuming that these are club fungi. 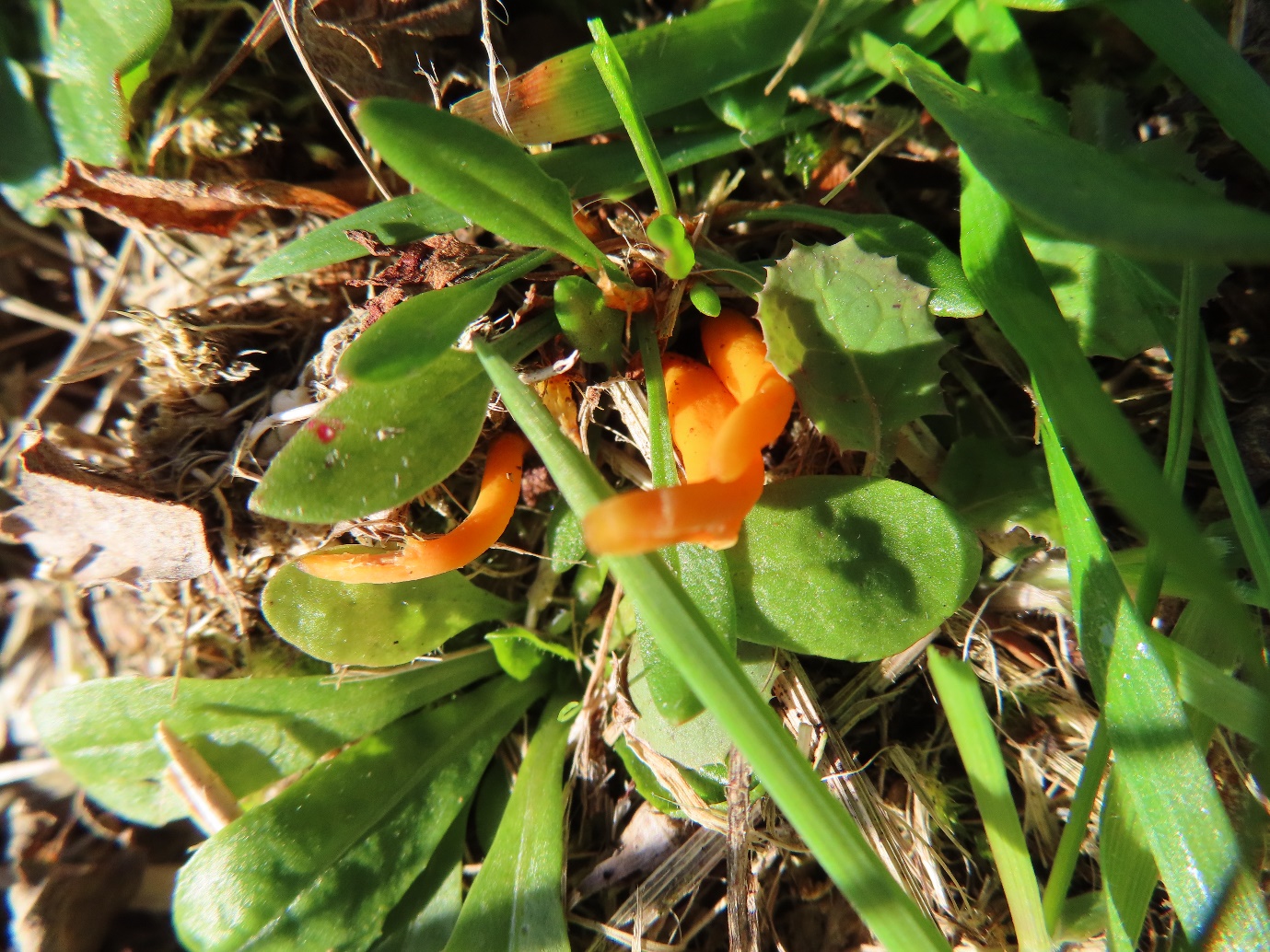 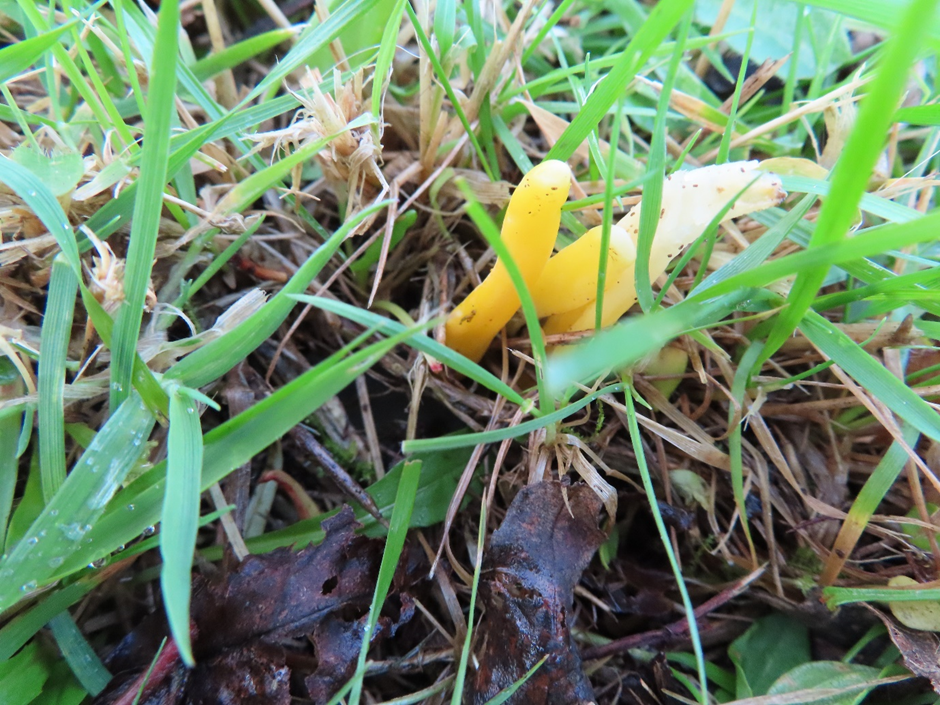 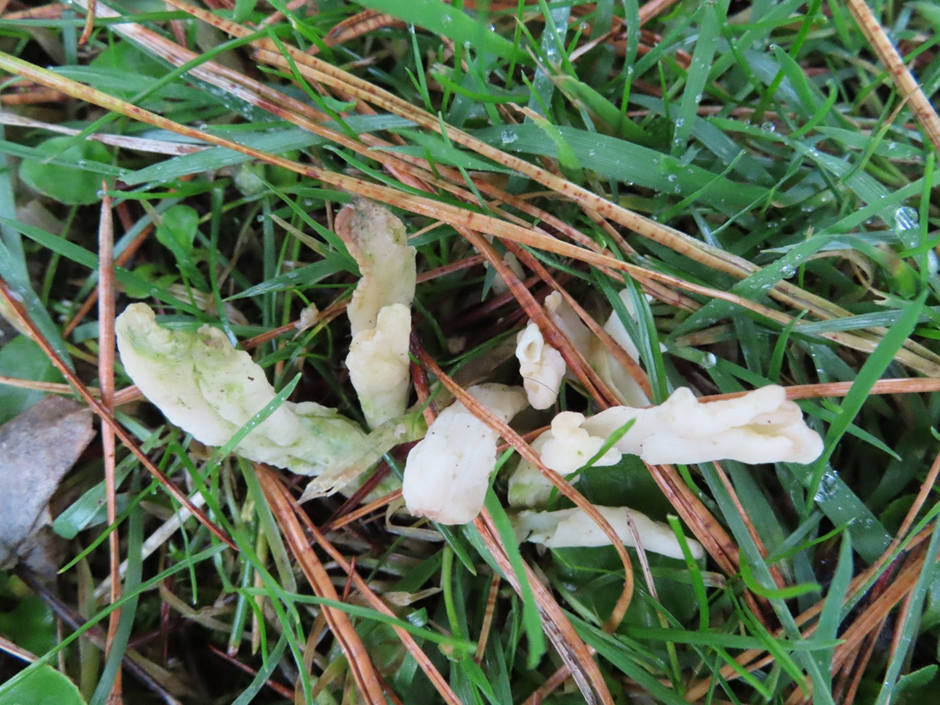 Further up the garden this small white specimen grew under the shade of some conifer trees. As all of the matching examples in the reference books are described as rare and vulnerable, I doubt that I have made an accurate identification and will just keep trying. 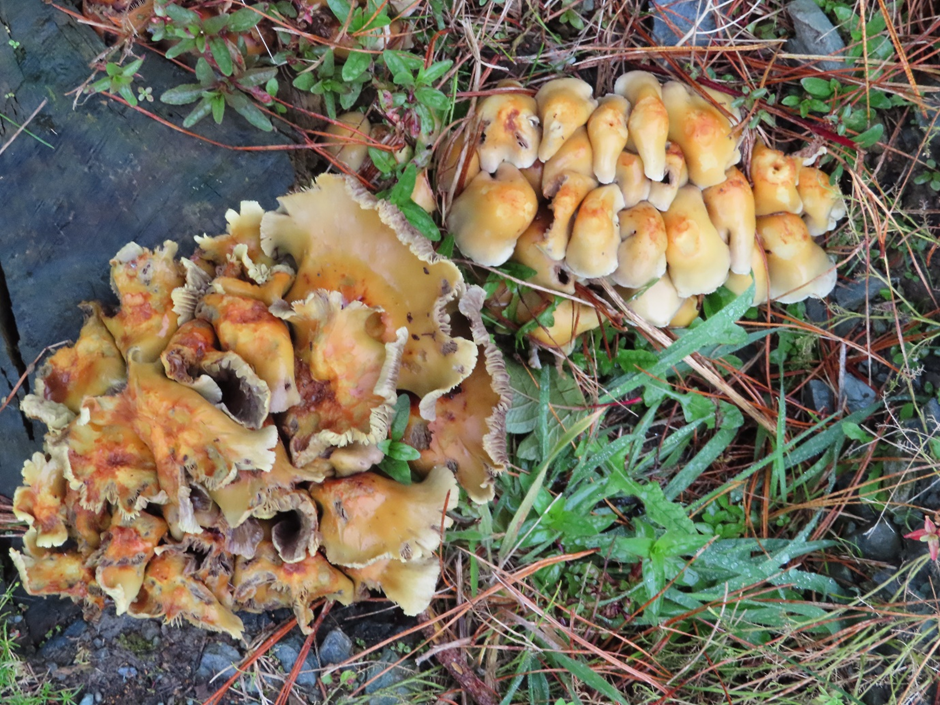 I am very fond of this mushroom mass which appears on an old tree stump every year. Each year the form is different but it is always dramatic. I suspect that it may be a ‘squashed’ version of the next fungus which was growing on a log. I have tentatively identified this as Sulphur Turf. 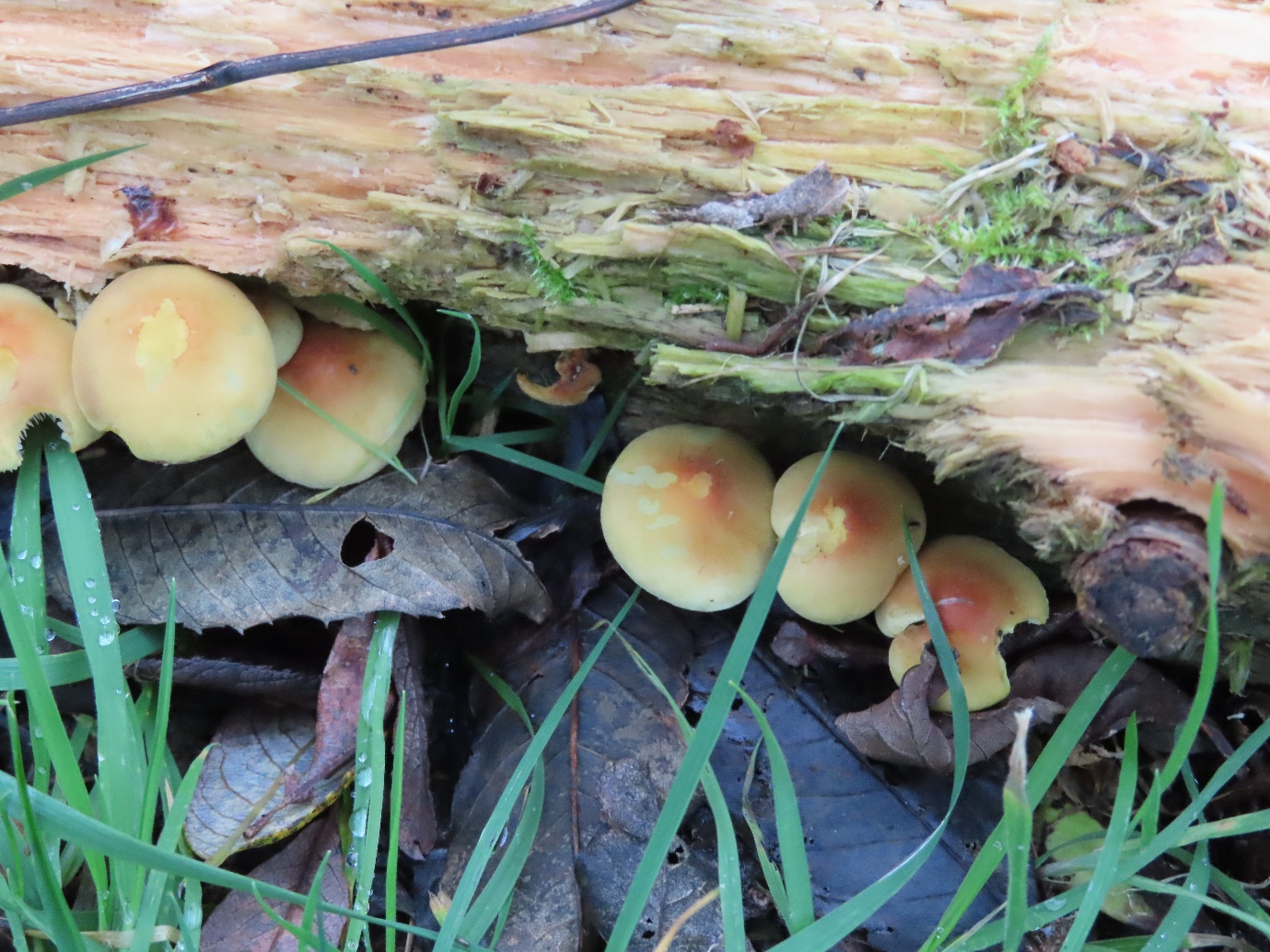 These tend to have bell-shaped or conical caps and long delicate stems. The one below is likely to be a Lilac Bonnet. Technically it was not growing in my garden but on the road to the cove but it is too attractive to omit. The other two appeared on the grassy patch at the end of the drive. 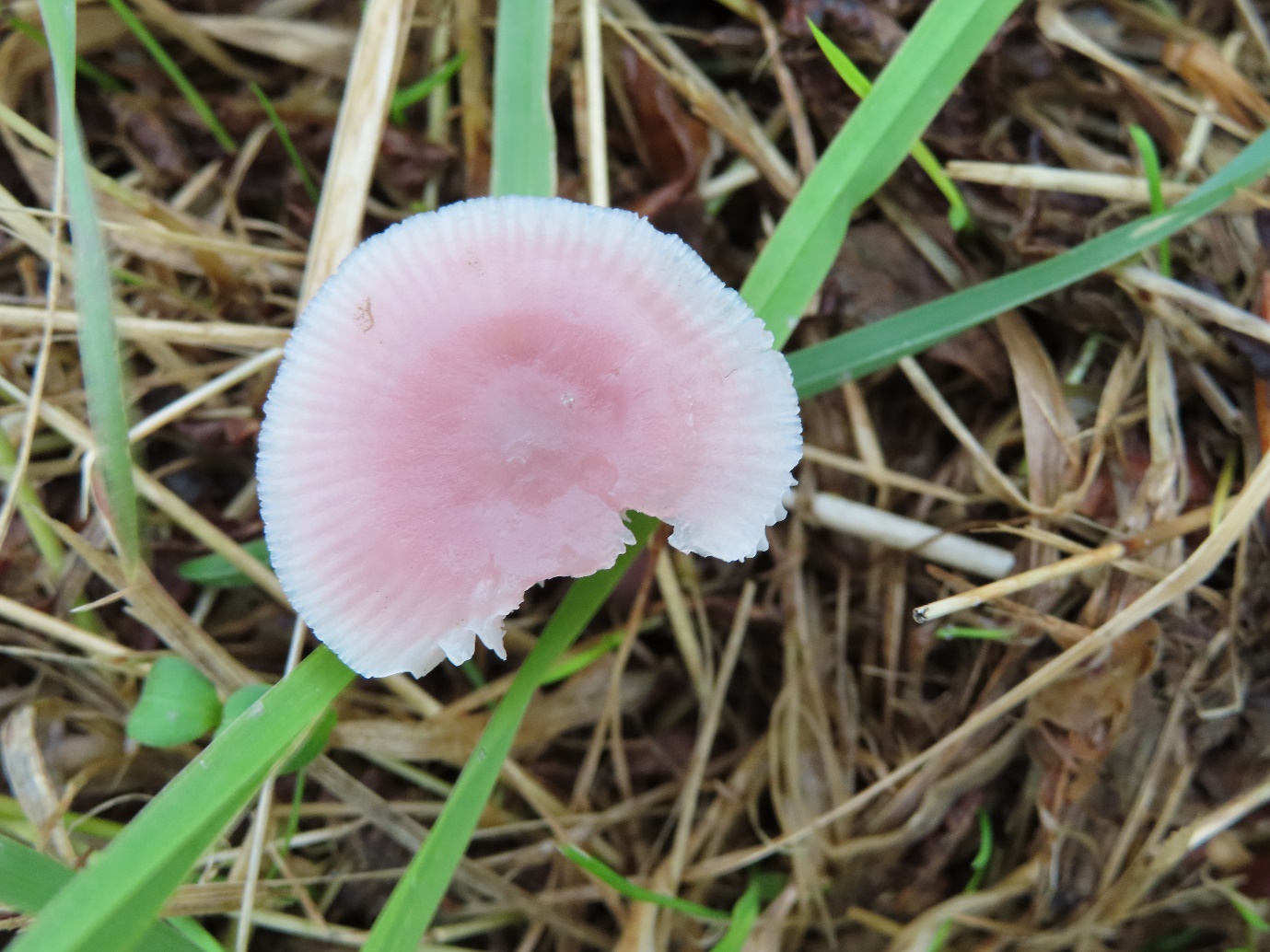 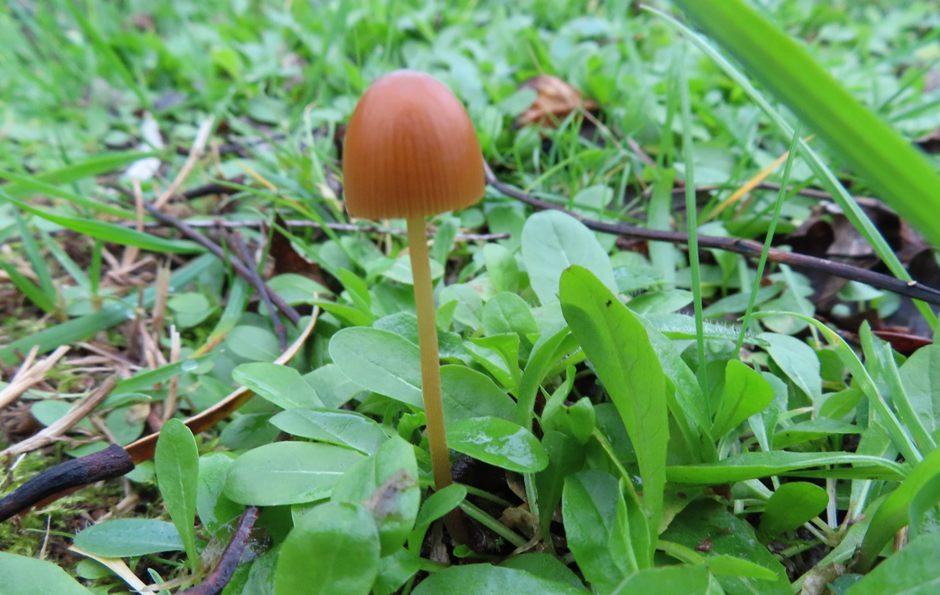 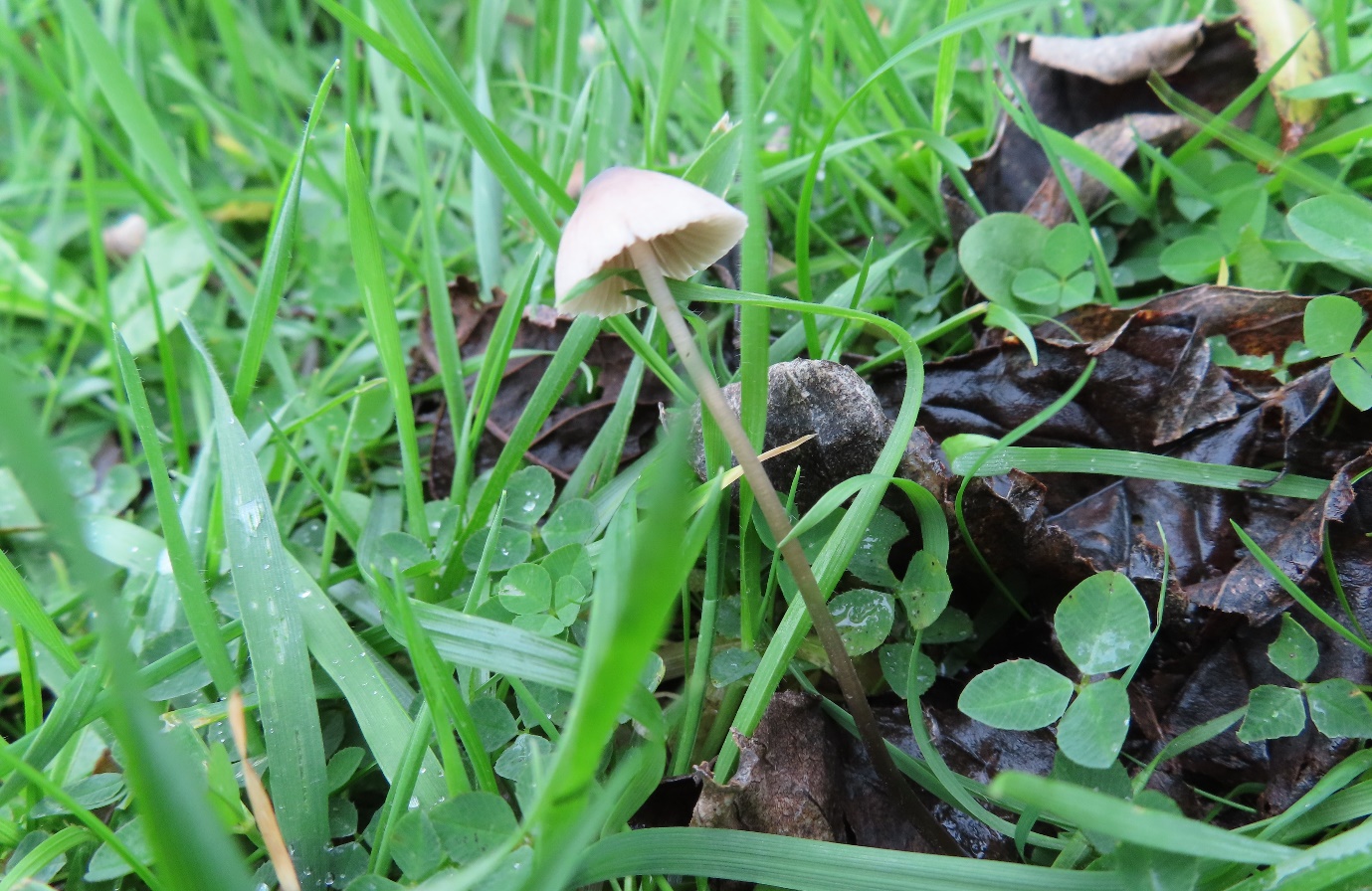 The size of this tiny bonnet can be appreciated when you see it beside a clover leaf.

Given the vivid colours of the fungi at the bottom of the drive I am hoping that the numbers will increase if I treat the area in exactly the way that I did this year. Although I have not had much success identifying the individual specimens, they have given me a lot of pleasure in the process of trying. I am also aware that I have omitted at least another 10 varieties here because of lack of space. While some varieties may be harmful to humans it is obvious that many of the creatures in the garden have been dining on the mushrooms. Many contribute to soil fertility and stability and they are the primary decomposers in woods. I now consider them an essential part of my gardening plans and look forward to discovering more as times goes on.

And now for something completely different…

A few days ago I picked a small bouquet of flowers delighting in the fact that this is possible all year round in this garden. This is in spite of the heavy frosts of the last two weeks. In the prehistoric garden I noted that the unknown creature is still eating the clematis buds as they appear. The tendrils that hang over the wall or are straying into other plants are untouched which makes me wonder whether it is a hare or rabbit. But there was one good piece of news, when first built the lovely stone wall became home to some small birds. Sadly, one of my dogs noted this and destroyed a nest full of chicks. I decided to plant pyracantha in front of the wall in the hope that it would deter the dogs and encourage more bird to nests. As I contemplated the most recent destruction of the clematis a bird whipped past me, through the pyracantha and into the wall. It was enough to make me forget the lockdown and feel that the loss of the visual sighting of the wall was well worth it. 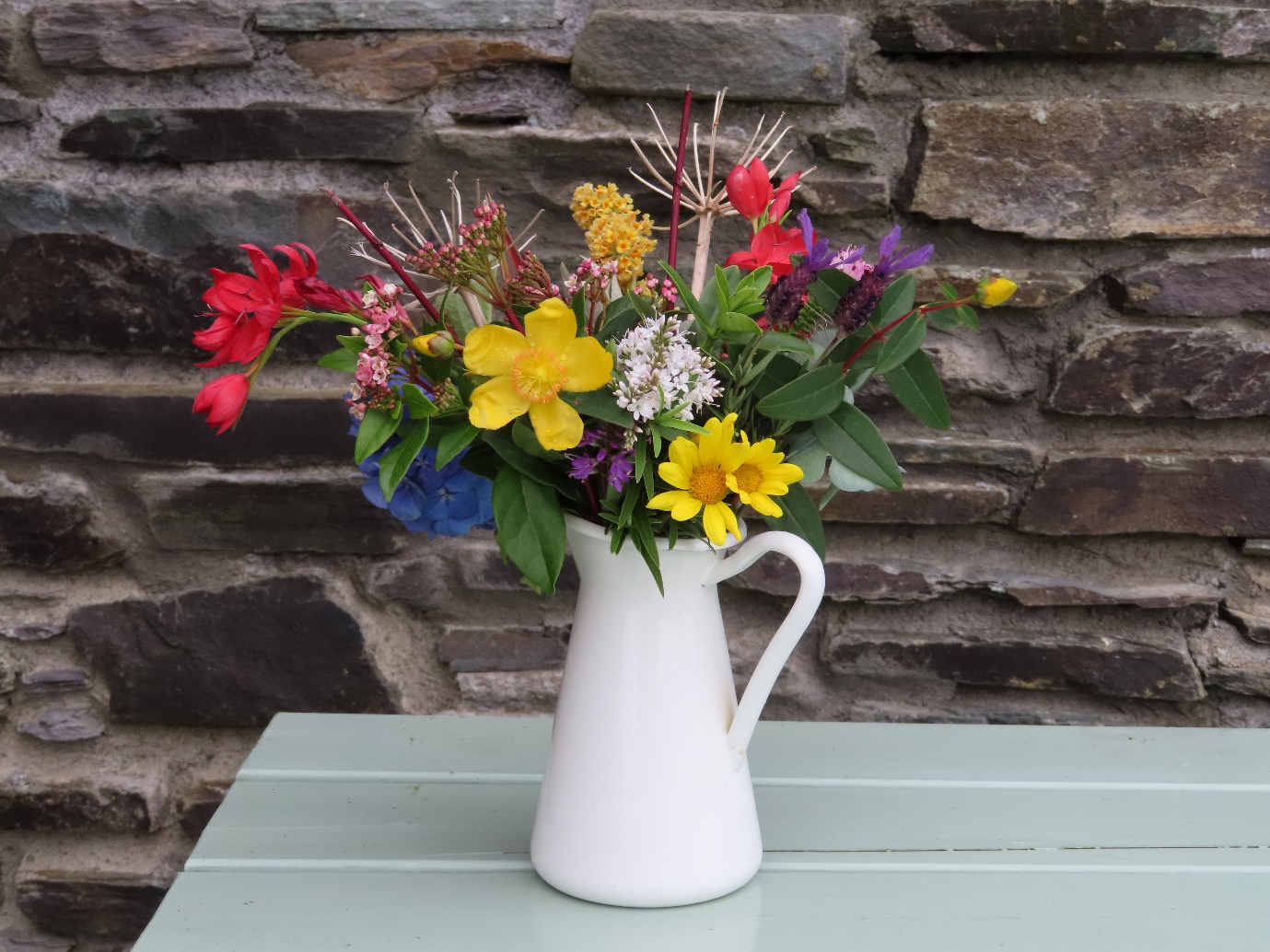 Despite the tedium of Covid-19, the garden continues to offer up some cheerful gifts. The first camellia blossoms are out and will last until at least April. A tonic in a time of need. 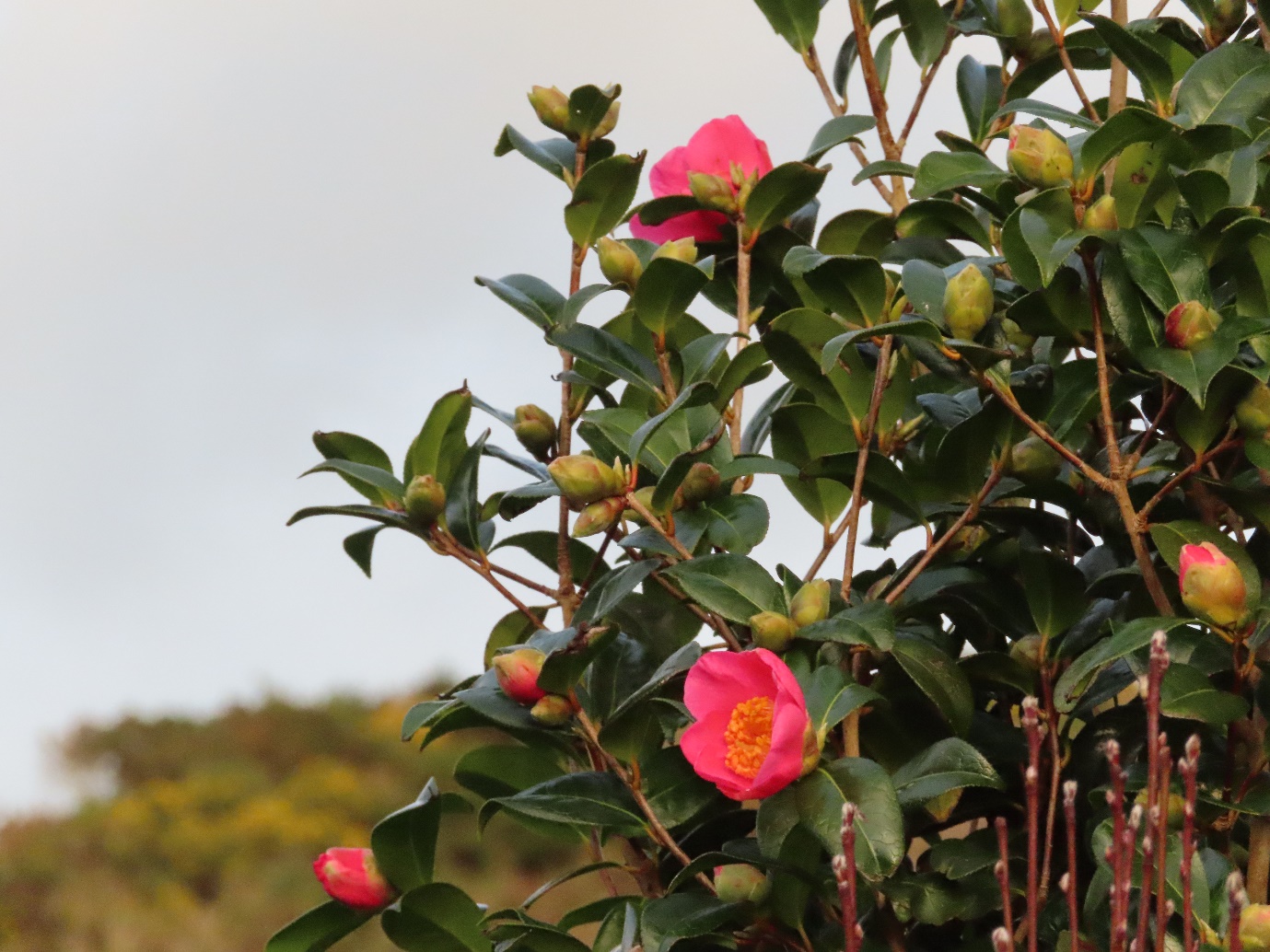 For anyone who is interested the website First Nature is an excellent source of data with very clear photographs. Roger Phillips book Mushrooms is a delight, however, despite it I have never managed to identify one mushroom, yet.