From one extreme to the other 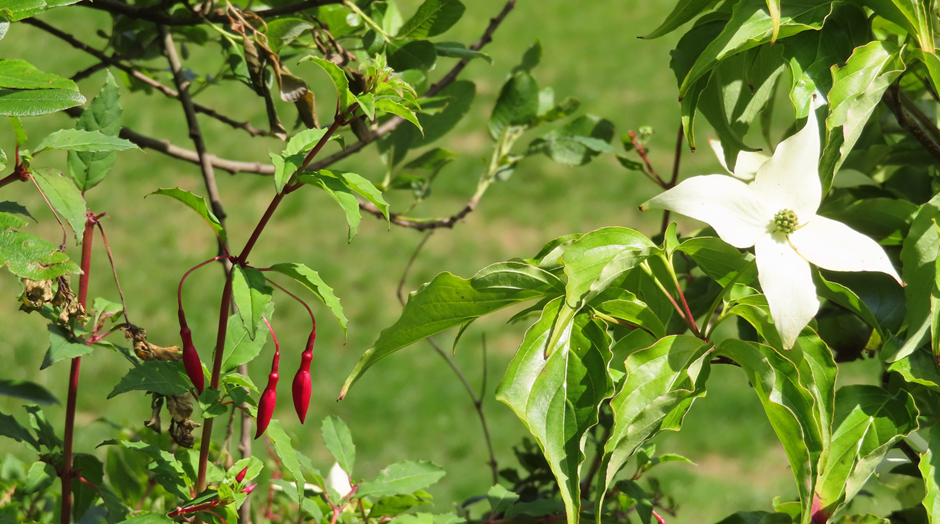 Cornus Kuosa with its tiny central flowers and showy white bracts doing well in the hedgerow at the bottom of the hill.

The garden is just picking itself up after yet another few days of stormy weather. We have had what I am now beginning to consider the worst conditions for the garden, cold, dry, salty winds with no rain to wash away the salt from the leaves. Most of the plants are showing signs of wear and tear as the salt has burnt the leaves but it is the trees in the copse that have sustained the most damage. The Italian alder (see below) is almost bare just after it had finished producing its leaves. This storm is identical to the one that did similar damage at the same time last year. The alder recovered then and I can only hope that it will do so again. 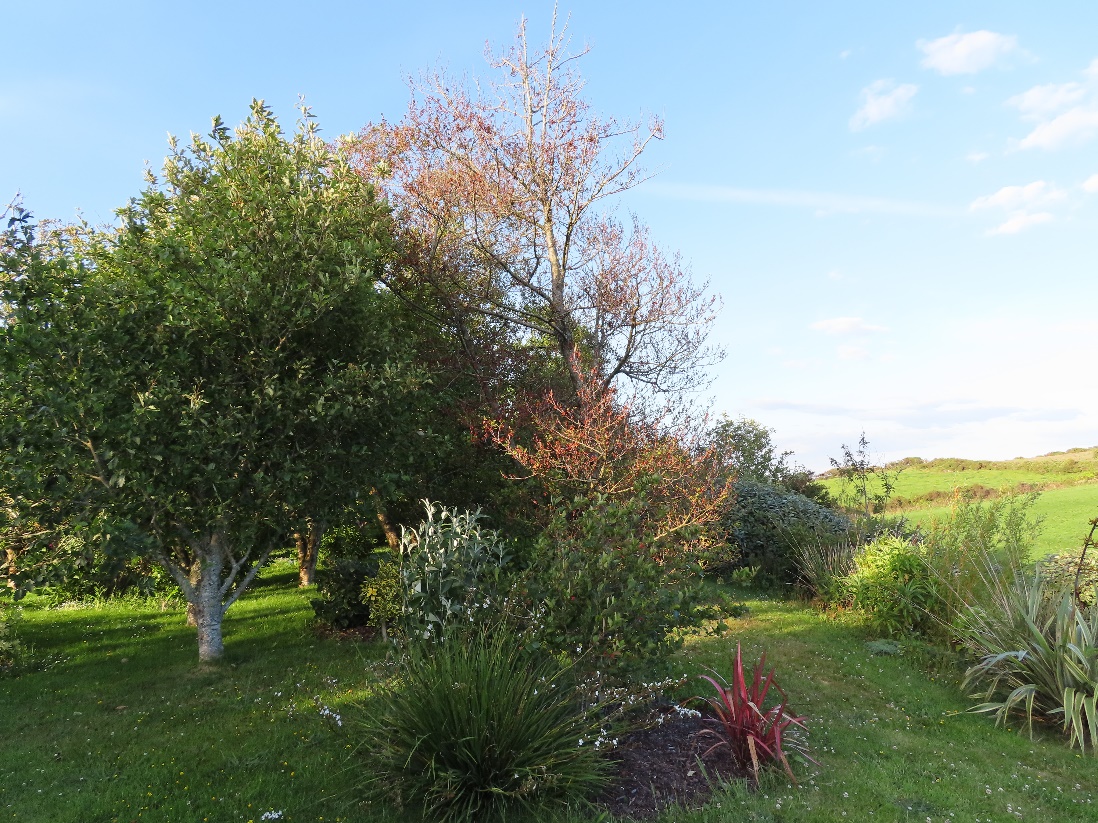 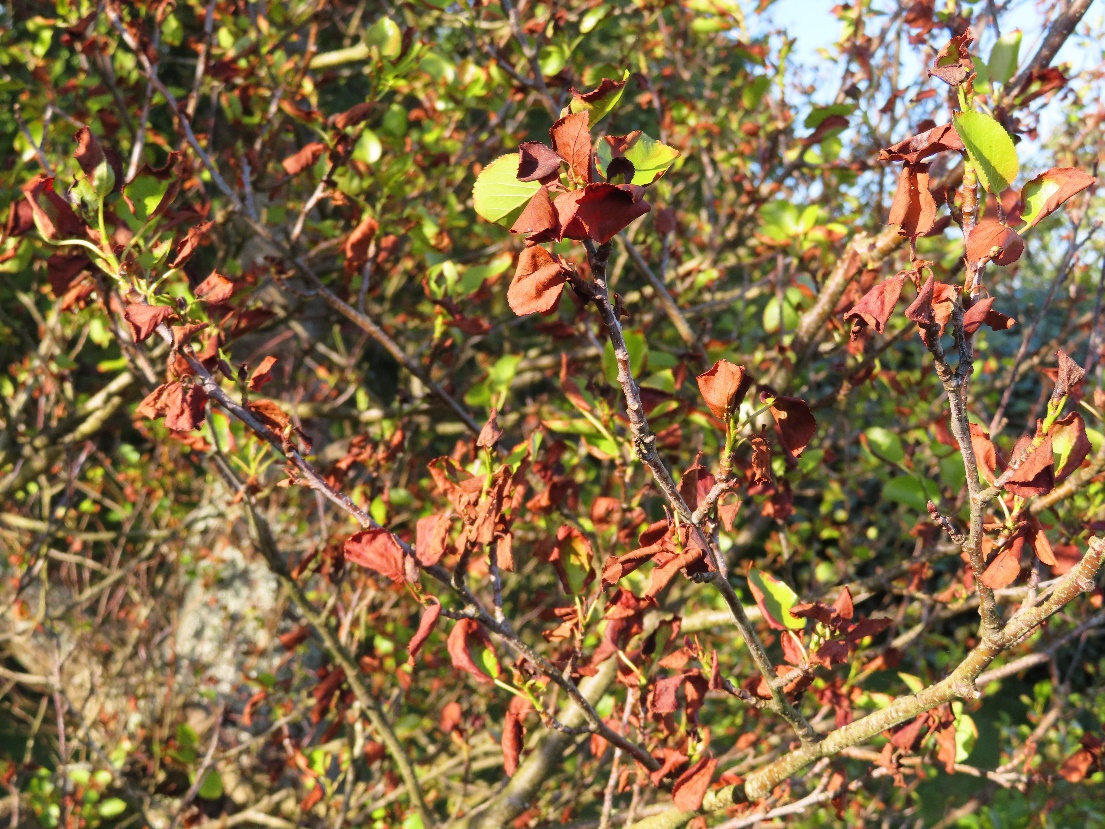 Details of the damage to the alder.

I found these two Azaleas in the corner of a garden centre many years ago. They were leafless, about nine inches high and on offer at one euro each. I took pity on them and, as with all of the shrubs at the time, placed them in one of the few available spaces in the garden. It is a relatively sheltered and sunny spot but floods occasionally in winter. As usual, I never got around to moving them. They seem very happy and reward me with a profusion of blossoms each May. Sadly, these were short-lived this year as the storm stripped them of each and every blossom overnight. 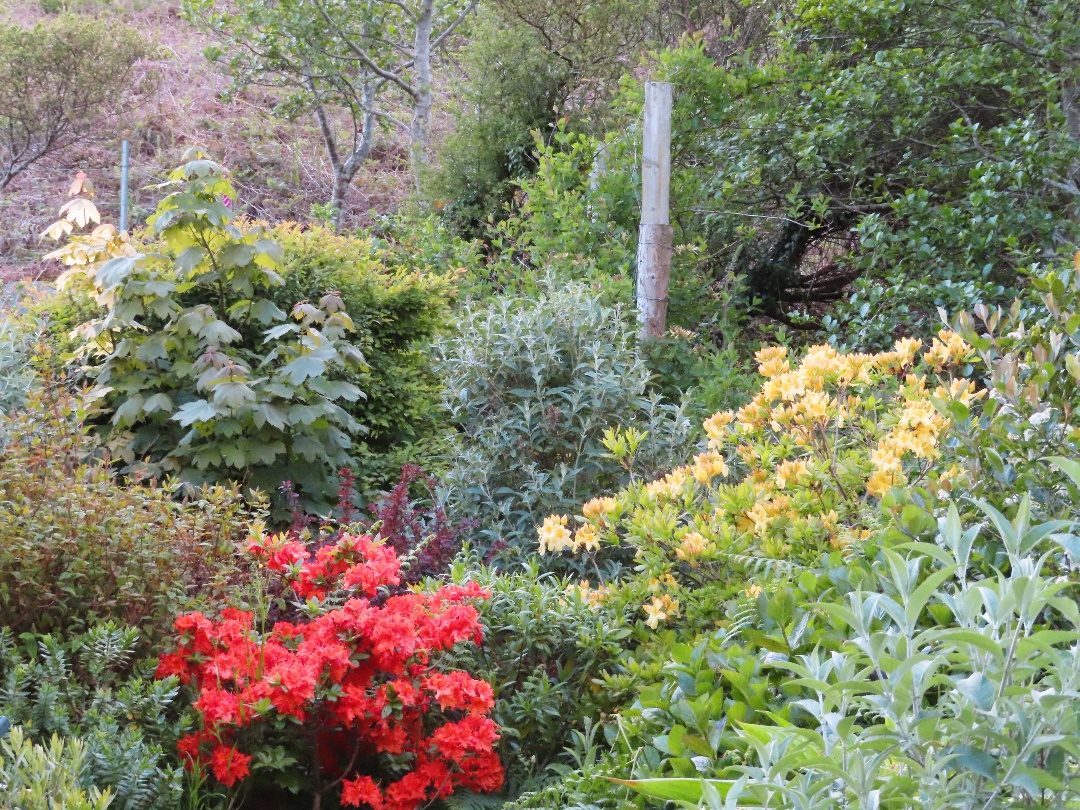 A greater upset was the damage to my Cornus Kuosa Satomi. This has developed into a very graceful small, shrub and is full of delicate blossoms ranging in colour from pale pink/white to deep pink. It has survived in an exposed spot for a number of years but shrubs have now grown around it providing some protection. I was surprised therefore to find that one branch had been stripped off during the storm, although all the blossoms remained firmly in place. It now looks rather lopsided but I hope it will correct itself in the coming years. 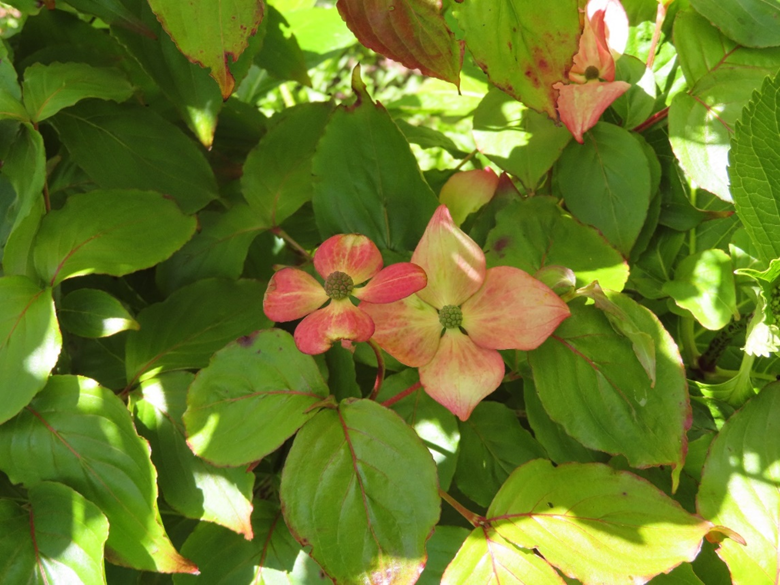 The garden is continuing to provide a riot of colour. Despite the fact that it originates in Chile the fuchsia is the emblem of West Cork and can be seen in all the hedgerows throughout the county. I have dotted some throughout my own hedgerows. They have not done as well as expected here as they do not like the cold. If you prune them too soon the frost will finish them off. Mine are usually slower to blossom than those in the hedgerows throughout the countryside but this low growing variety is already in full bloom. I don’t seem to have taken a note of its name but it grows grows well under the pine trees and seems more resilient than the other varieties. Identifying and sourcing it can be a task for the winter. 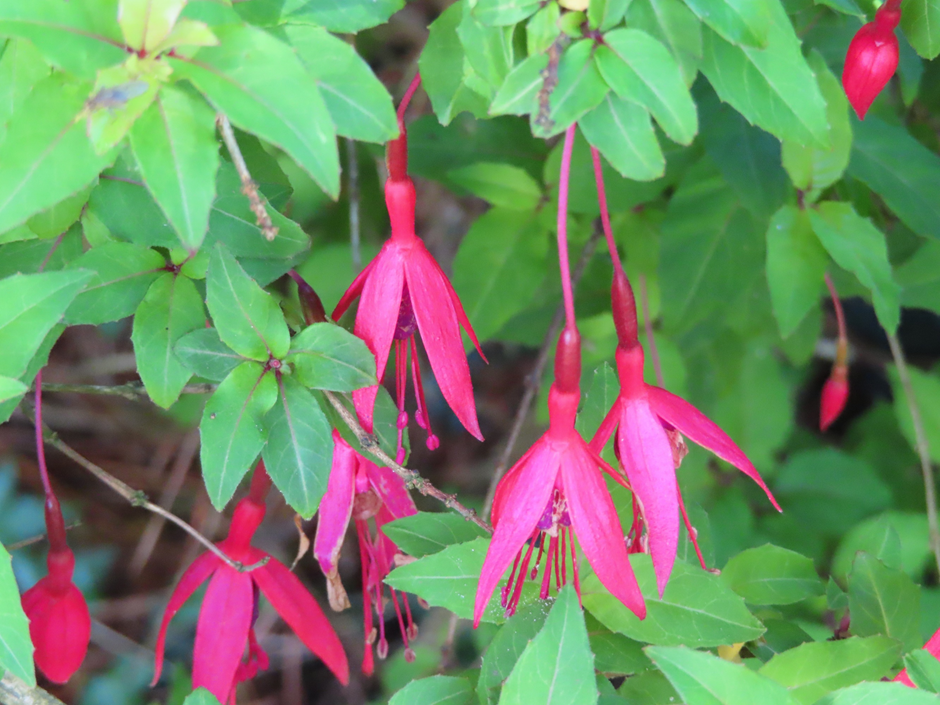 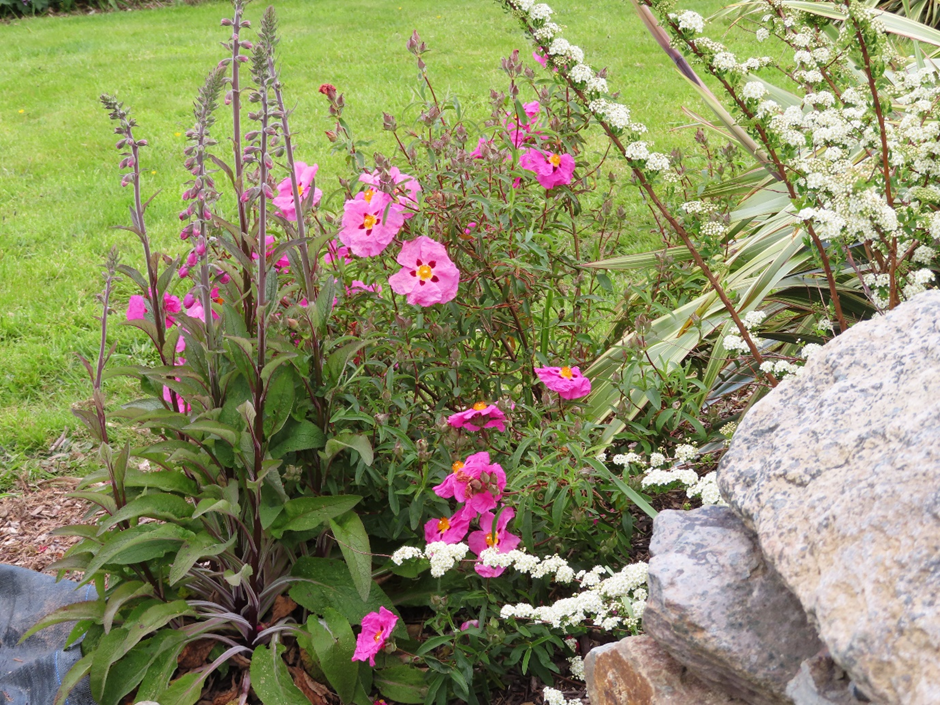 I saw my first rock rose Cistus x purpureus in a shrubbery near the harbour in Schull just a few miles from here. I decided that if it could survive there it could survive anywhere and I now have a number dotted around the garden. These Mediterranean plants provide new blossoms each day and flower throughout the summer. They also provide a dramatic statement to any border. The June 2018 issue of the Royal Horticultural Society Magazine The Garden has an interesting article on these and you could fill a garden with the number of varieties available. I hope to add to my collection as time goes on. 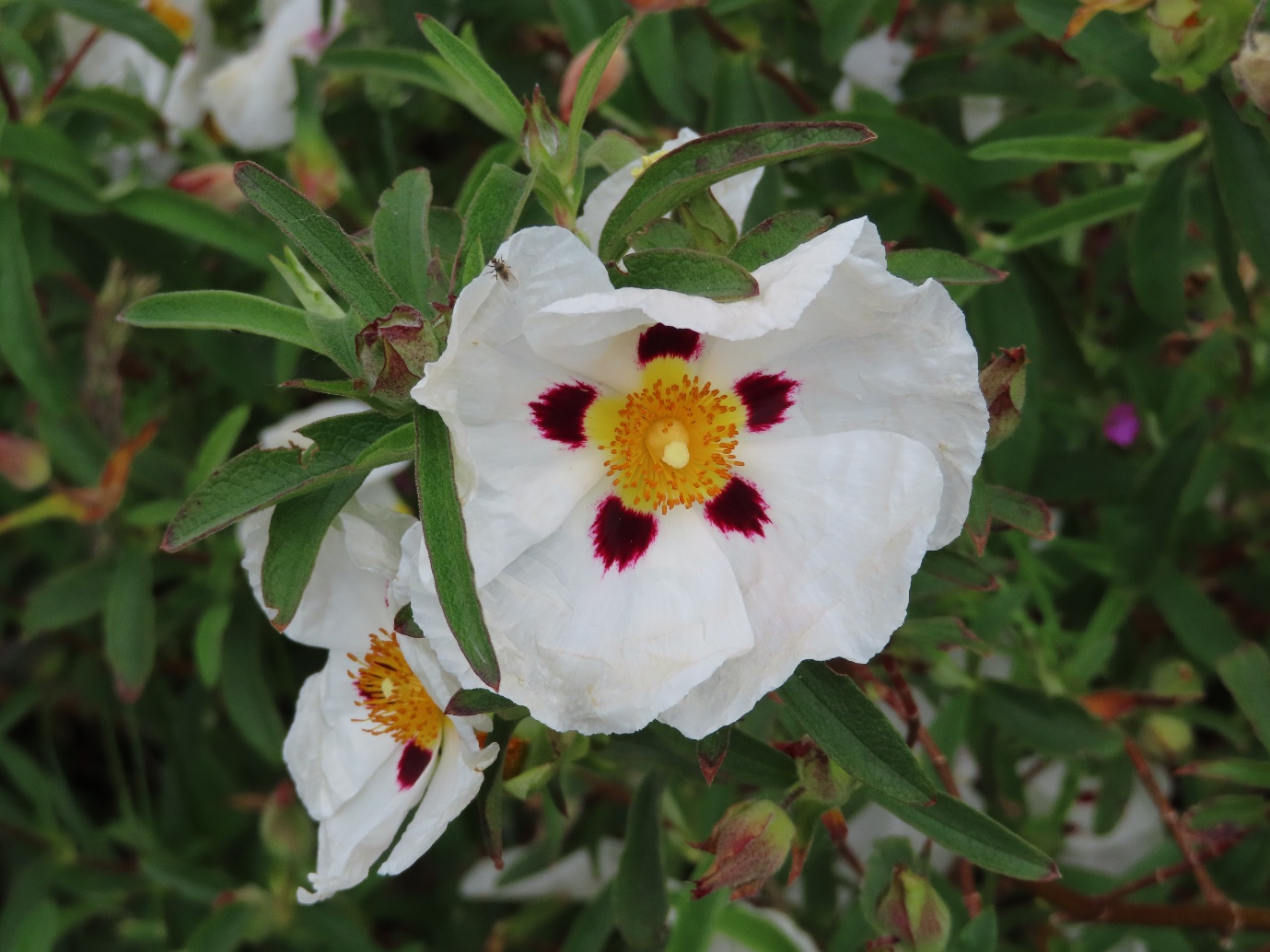 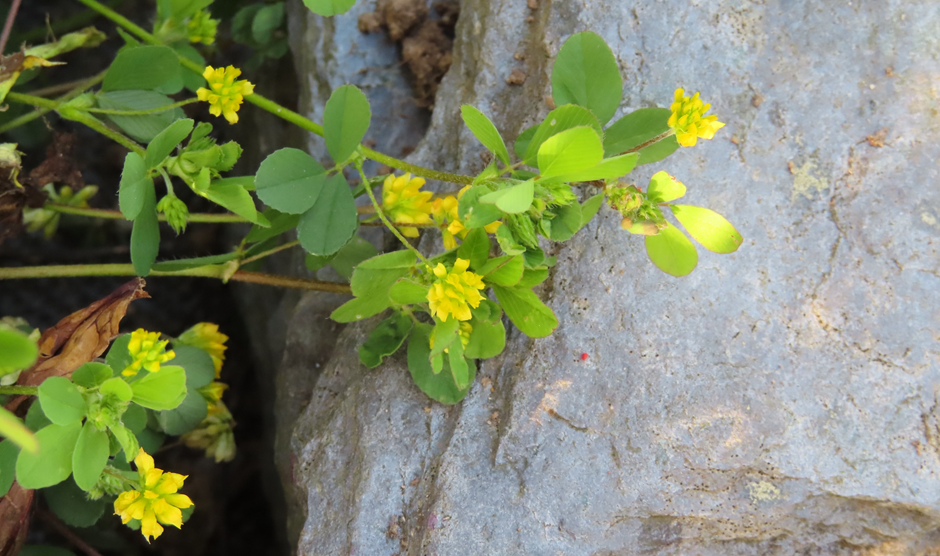 Lesser Trefoil: apparently this is considered to be the true shamrock but it does not resemble the foliage of my childhood.

The stormy weather has been followed by a very warm spell and it is too hot to work in the garden in the middle of the day. It is hard to imagine that we had a winter of endless rain and that now we badly need it. None is forecast. I have five water butts which provide over 1000 litres of water but they are emptying fast. The few potatoes that Millie is leaving me require a lot of water as do the other vegetables and I will soon have to make choices as to which shrubs get water and which I will leave to ‘tough it out’. The wild flowers on the other hand are at their best. They are undaunted by the storms and seem to love the parched soil and neglect. There is a lesson in this somewhere. 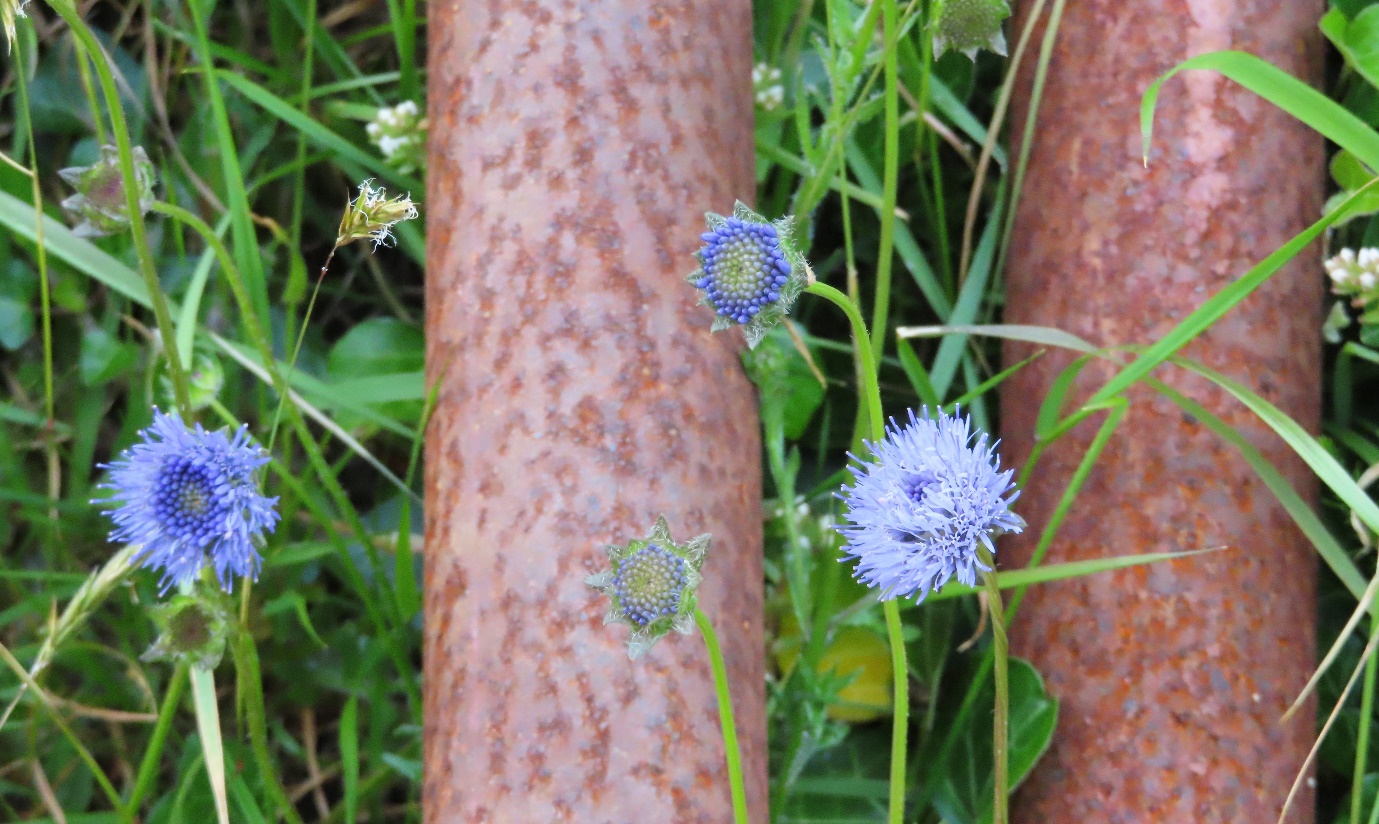 Sheeps-bit now adding the perfect contrast to the yellows and pinks on the bank behind the house.

Over the years I have refined my definition of weeds. Sadly when I was a child weeds were anything that had not been placed in a formal garden with great care and planning. It was if they were second class citizens because they were so prolific and grew and reproduced so easily. These days my definition of weeds is covered by the following characteristics: a) The plant is difficult/impossible to remove from the ground and requires serious lifting equipment,  b) They spread like lightning and c) they smother everything around them. In this garden only two ‘wildflowers’ have been designated as ‘weeds’. The first is the ‘creeping Buttercup’ whose name has been bestowed by someone with a peverted sense of humour. ‘Creeping’ is a misnomer for galloping and the roots cling to the soil like limpets. In some areas of the garden I have consistently cleared the ground of all buttercups before the flowers have appeared. This has included removing every visible piece of root. I don’t know why I bother as it only takes a few weeks for the area to be covered again and I am back to square one. 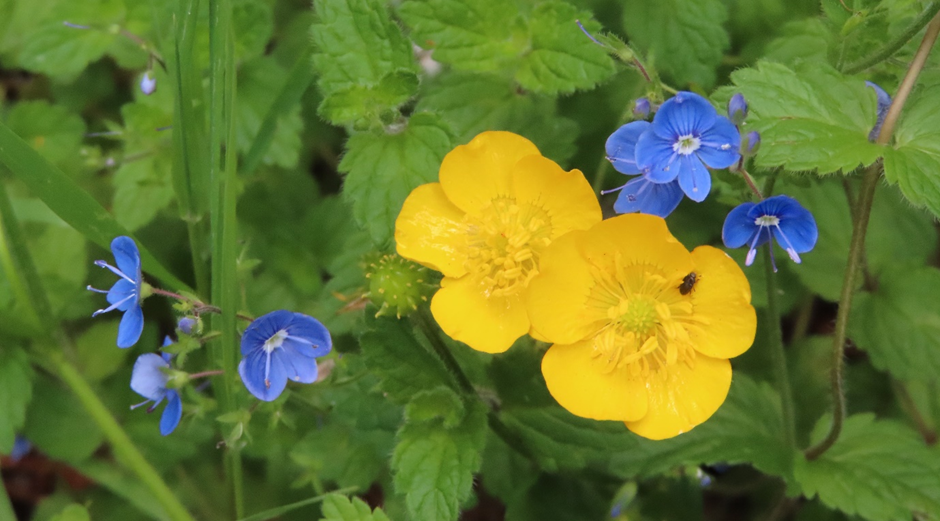 I do think that the buttercups are beautiful especially paired with other wild flowers but they crowd these out in no time at all. 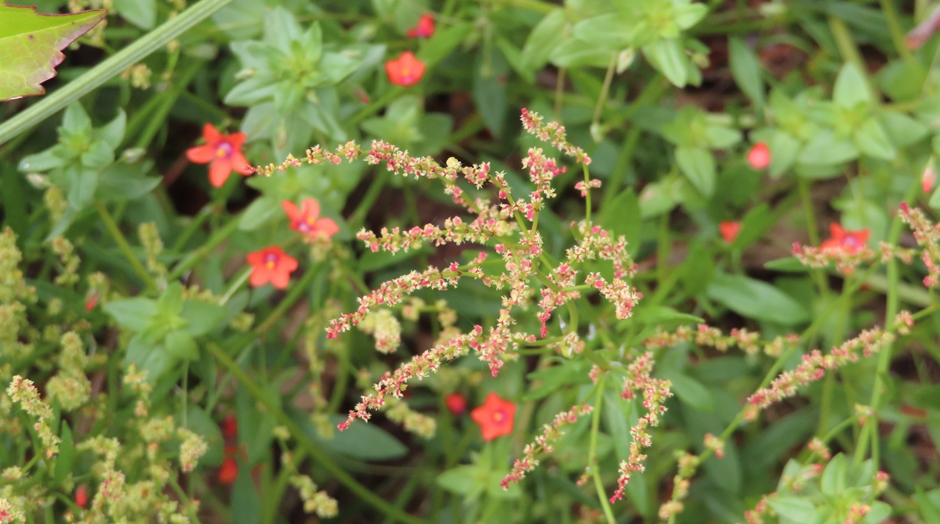 I have to admit that this wild sorrel does look attractive especially against the scarlet pimpernel. If only it could control itself.

Wild Sorrel is my other bête noire. This could be a useful plant as it’s leaves apparently add ‘zest’ to a salad. Removing it from my garden is adding to my gray hairs and there is no ‘zest’ involved. The flowers are an attractive colour but the roots have to be seen to be believed. It is like a child’s game when you pull out the plant as the roots take on a life of their own and travel for miles in no logical direction. When they finally break off (they never end) you have just started a whole new colony. Compared to these ‘problem weeds’ such as dock and dandelion are a walk in the park and have been transferred from my small list of weeds to my list of wildflowers. 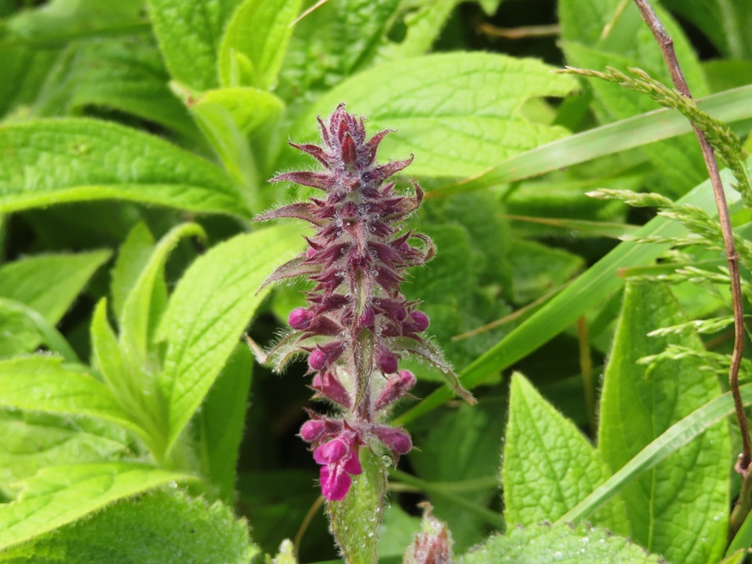 This is another plant that is hovering between two lists. It has a very attractive flower but is invasive and is clearing out one of my herbaceous beds. It is easy to remove but like wild sorrel the roots go on forever and the plant soon reappears. The leaves also have a rather unpleasant smell although this is not part of my definition – at least not at the moment. 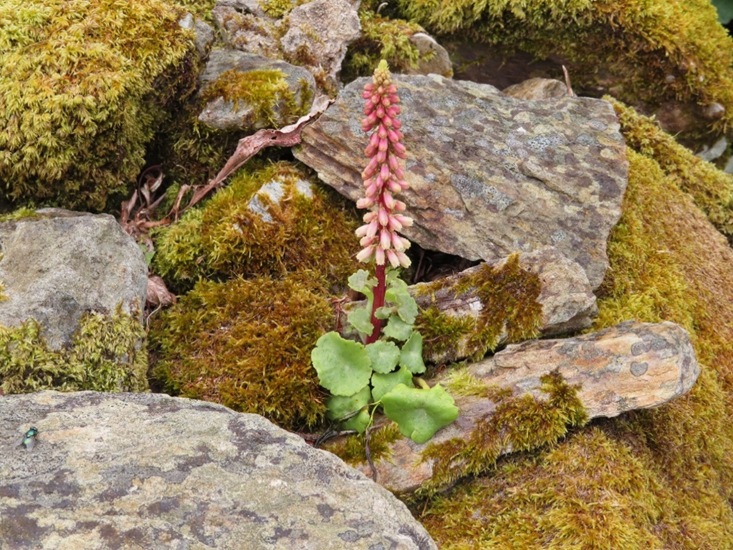 Navelwort or Pennywort. This is rather a lovely little plant which is very happy growing on the dry stone walls around the property. 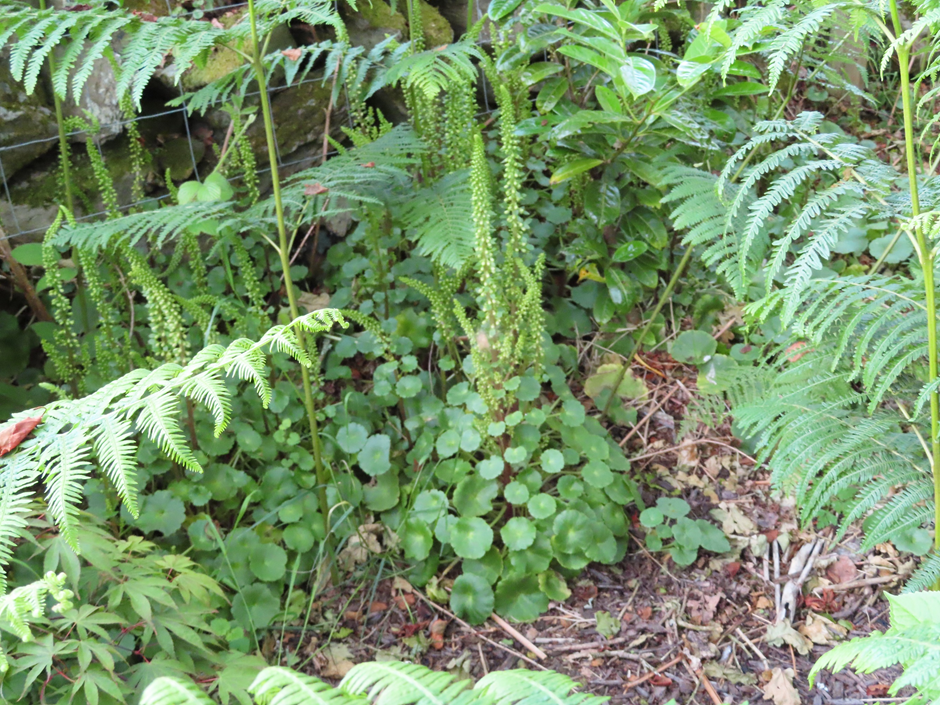 In the shade of the copse this plant takes on a different colour and is full of lush leaves but I think it is the same plant. It also grows to a considerable size and loves the moist shade.

Pale Willowherb a tiny flower growing in the copse. The flowers are so small it is easy to miss. A number of its relatives will blossom later in the summer.

A bee feasting on the geraniums in the border.

My herbaceous border is at the front of the house in full sun. It is very small and ringed on three sides by hydrangea some of which have been here for many years and provide essential protection. I have always loved these borders and have been proud of those that I created in other gardens. The one here is an absolute disaster. Very few plants survive the winter here although I have chosen them very carefully. Poppys, Geraniums and Geum do well and the success of my paeonies are a surprise. But each May the border is full of Lychnus and a few other ‘invasive’ plants plus the ubiquitous creeping buttercup and Hedge Woundwort. At the moment it is very dull. Meanwhile on the other side of the wall I have left a small area of the vegetable garden unplanted. It is a riot of colour. Foxgloves, Common Ramping Fumatory, Cats Ears, Greater Plantain and others have filled the area and are the perfect contrast to the Catmint‘ Six hills Giant’ following the curve of the wall at the back. There is not a blade of grass or a creeping buttercup in sight and the air is full of the sound of bees and other insects. There is a lesson to be learned here. 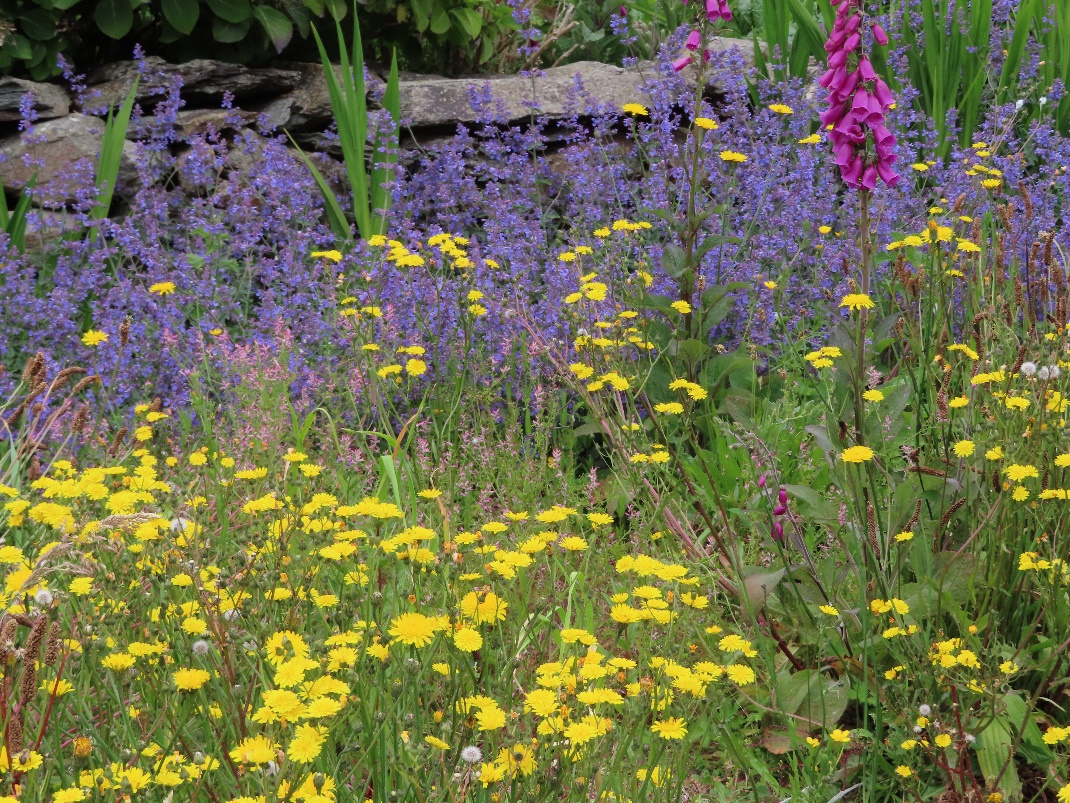 Catmint ‘Sixhills giant’ provides a dramatic backdrop to the wildflowers in the vegetable garden. 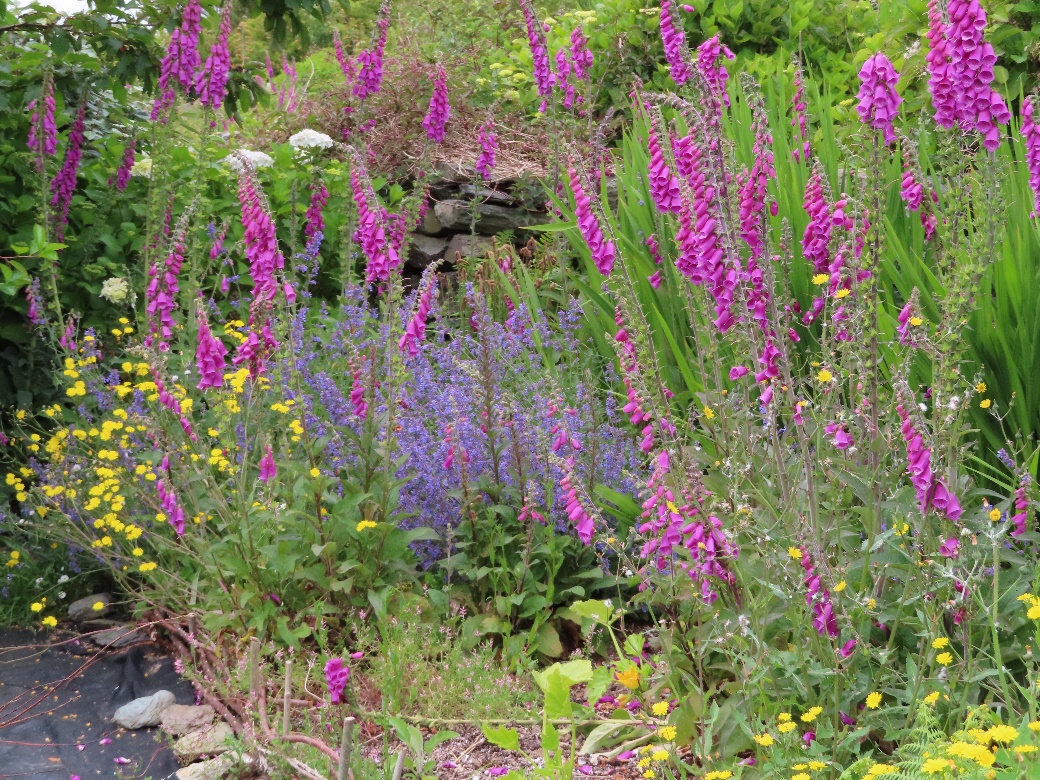 The Foxgloves also love this area. 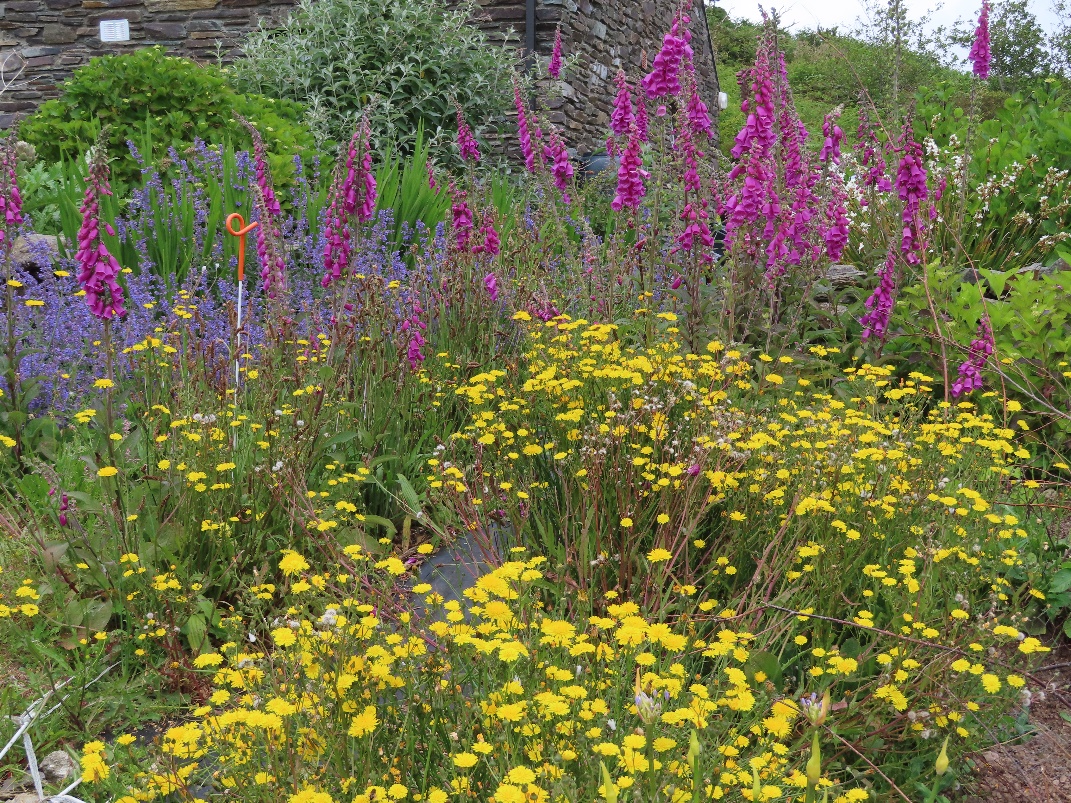 The border of my potato plot.

It took me three years to find a permanent place to live when I moved to West Cork and I was exhausted by the time I found my new home. A lot of work needed to be done to the house and there was no garden as such so it was quite an undertaking to start from scratch. Any doubts about my move were erased when I went upstairs to open the windows to let in some air. Immediately opposite me and just thirty feet away on the bank behind the house a fox was busily creating a mound of ‘edible treasures’ for its dinner. He/she would disappear for a few moments and return with new items of food. If it was aware of my presence it was not bothered and s/he was obviously very comfortable in the area. Since then I have watched the coming and goings of a series of foxes and cubs who provide me with a lot of pleasure whilst driving my dogs wild. They roam the garden at night and seem impervious to the expensive fencing I put up to keep the dogs in. Suddenly last year they disappeared. I missed their presence so it was with great pleasure that I glimpsed the young fox below dashing up the hill in front of the house. He has been back since so I am hoping he has made his home here. I might even get a better photograph!