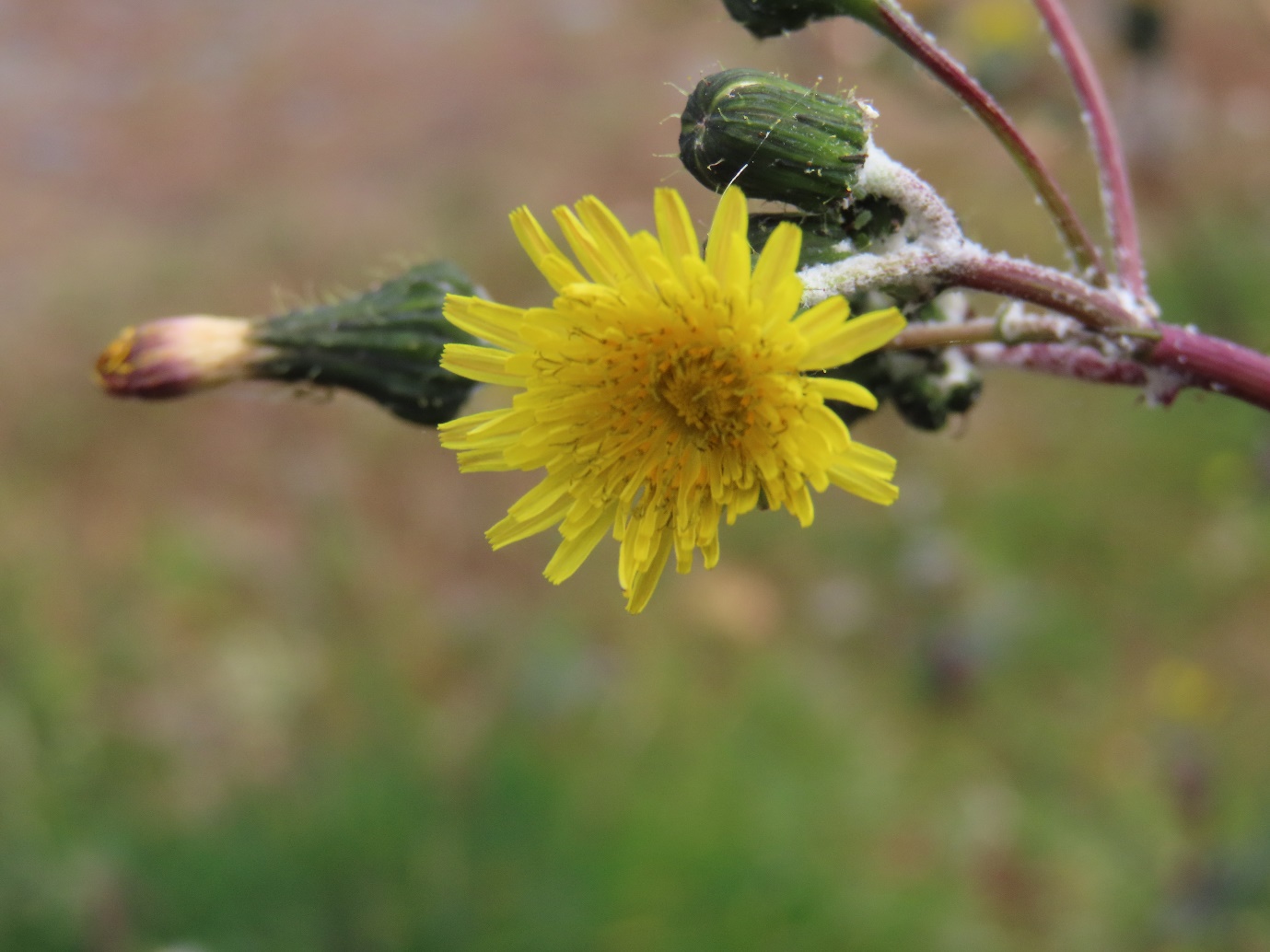 Prickly and Smooth Sowthistle both have lovely flowers, but look rather dishevelled as the seeds appear. I always have to resist the temptation to pull them out when they are in this state until I noticed that something has been eating the seeds on one plant in the rockery. My tolerance was rewarded the other morning when I noticed some activity on the plant growing in the herbaceous border. Two bullfinches were having a feast on the seeds and did not leave until they had stripped the plant bare. They are rare visitors but appear at this time of the year each year for a few weeks. Now I know why. Sowthistles are now welcome at any time. 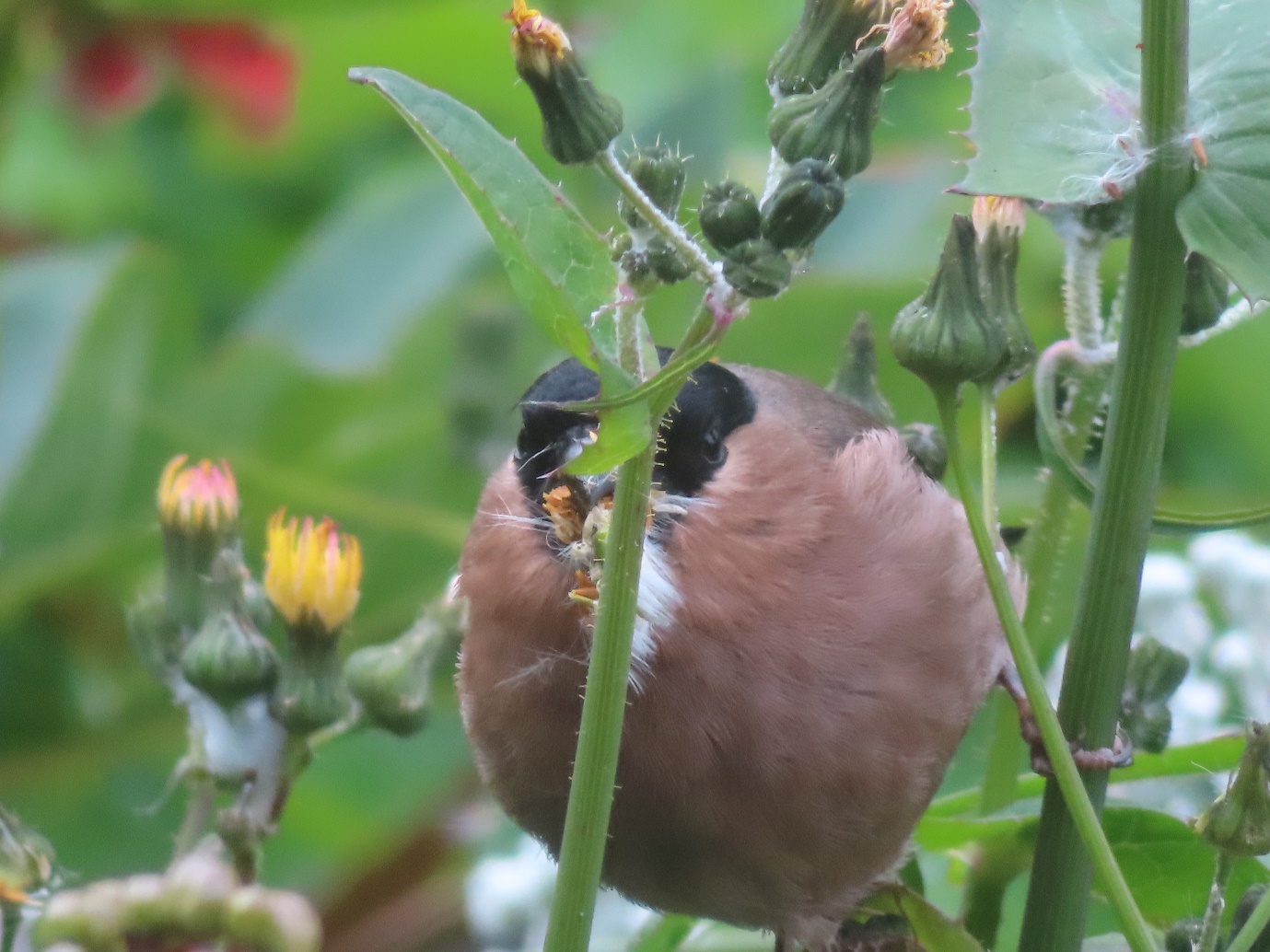 The female bullfinch with a mouthful of seeds. 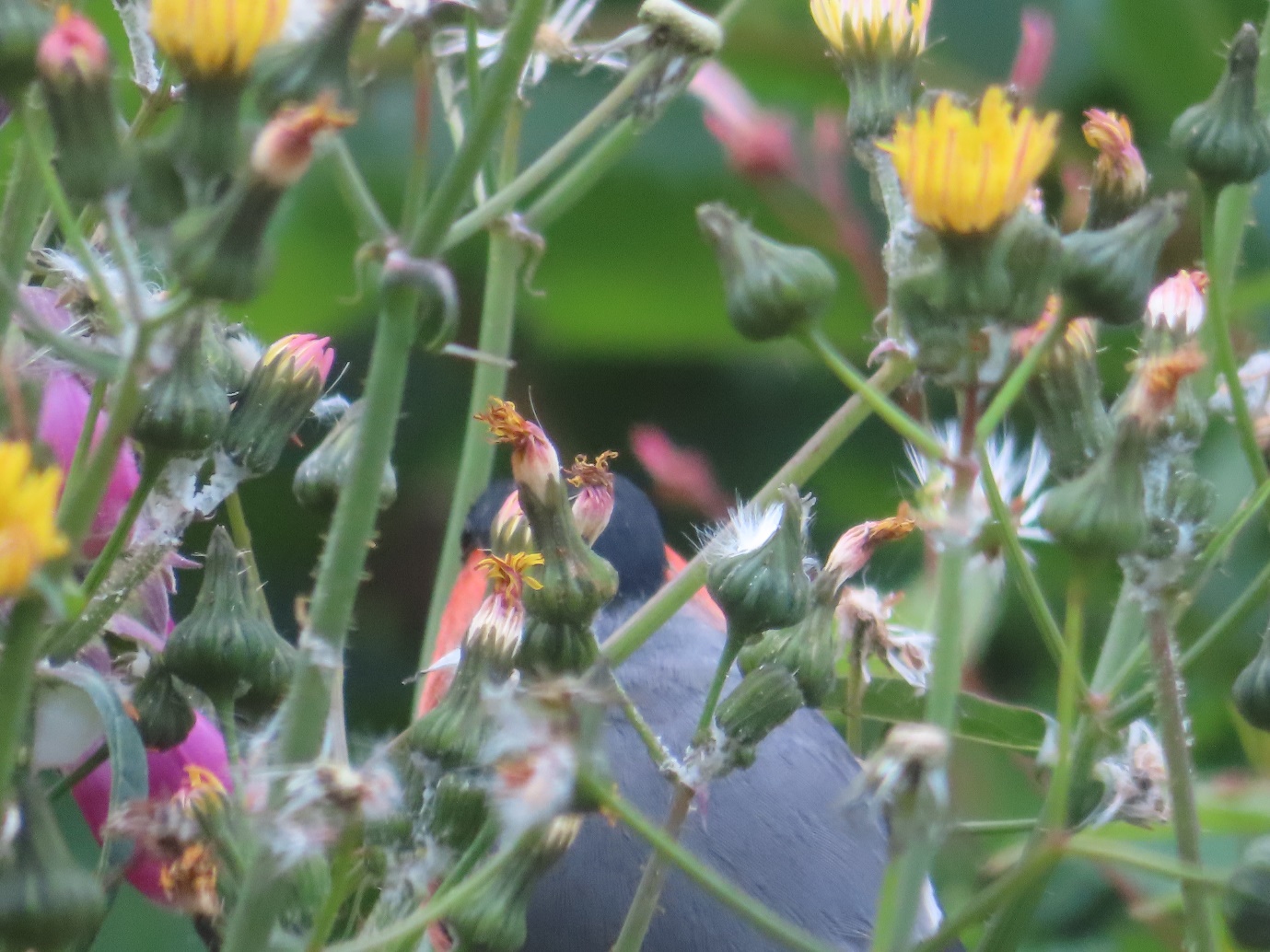 I was reluctant to move from my place by the window and the male bullfinch was very coy so you can just see him through the plant. However, there are many more throughout the garden so I will keep looking for them and a better photograph. 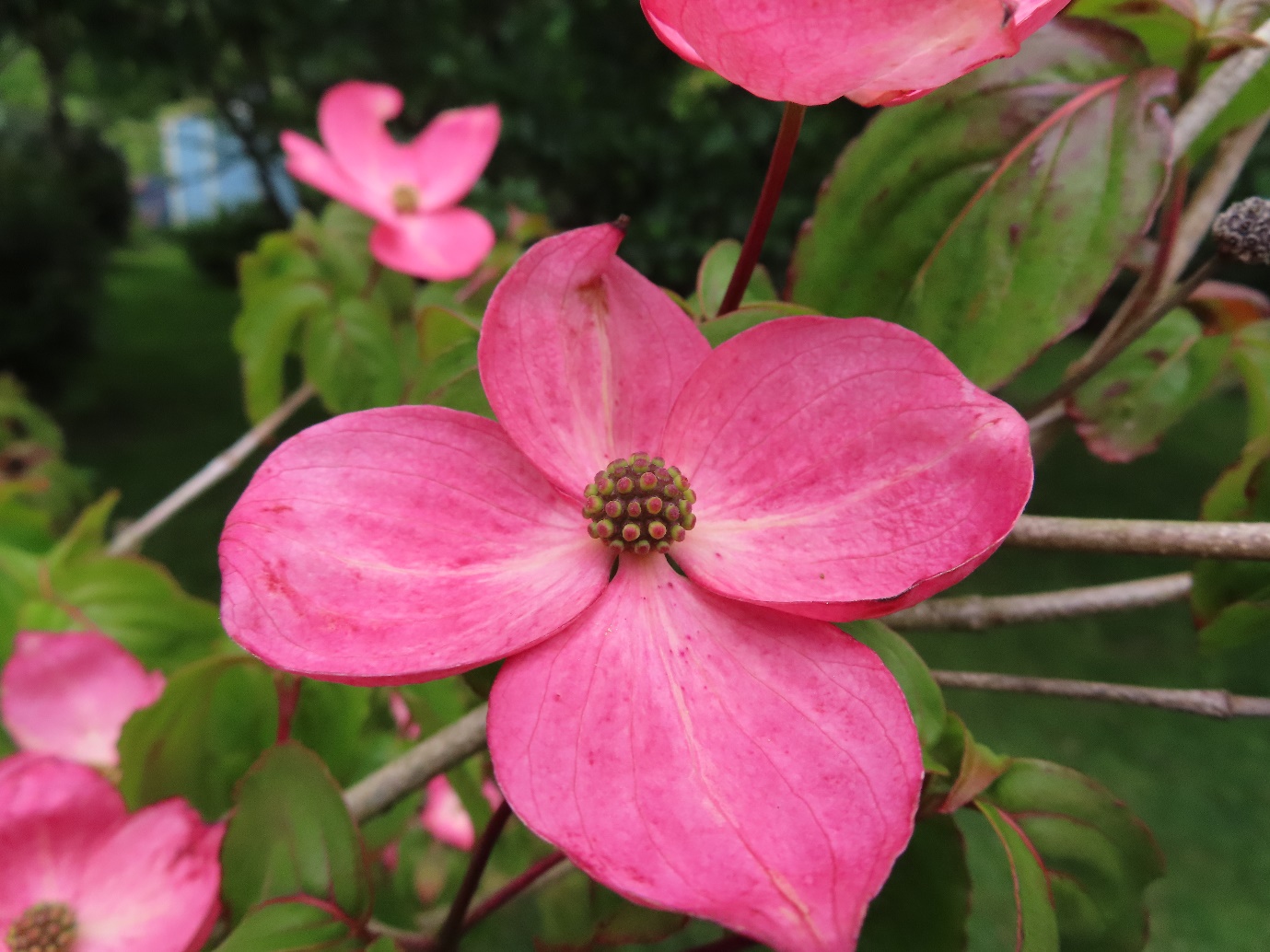 I have just planted my second Cornus ‘Kuosa Santoni’ as this one has been so successful. It flowers for months on end and this specimen has grown into a small elegant shrub that could grace any delicate, oriental painting or piece of porcelain. 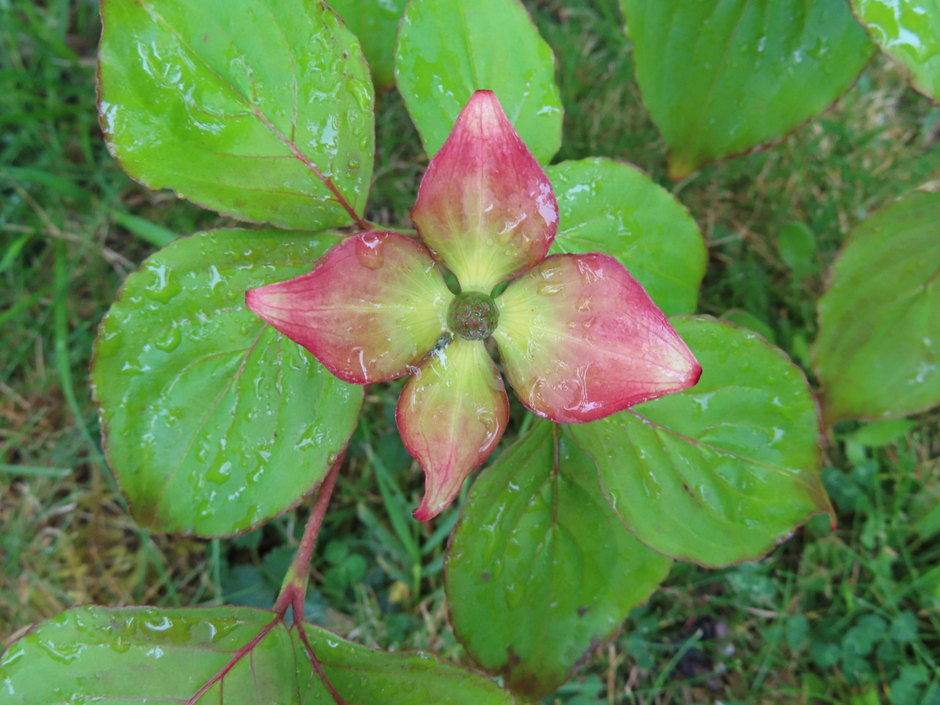 A younger version of the ‘Santoni’ flower taken in early May. 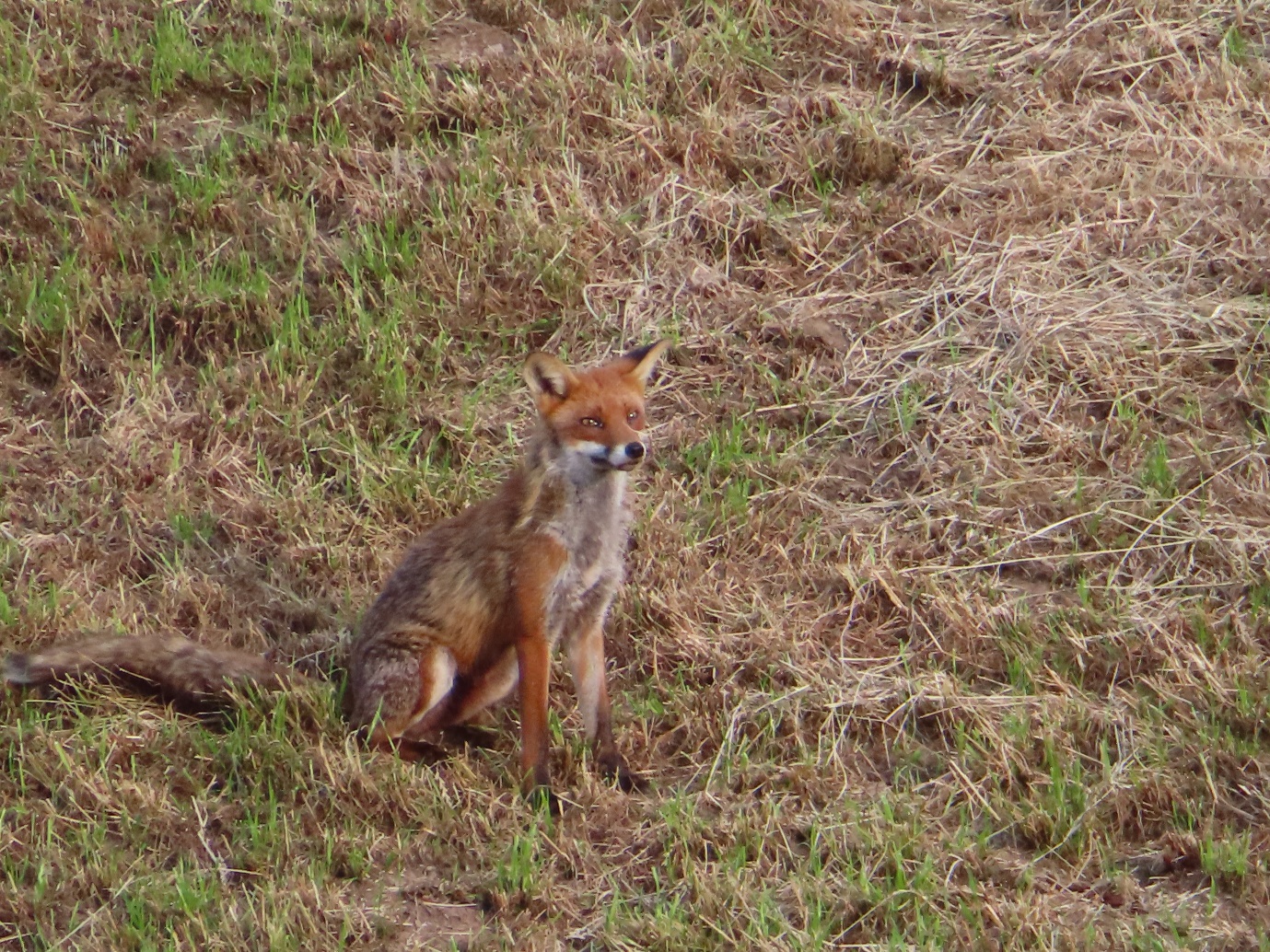 Five foxes scoured the fields after the recent harvest and one vixen brought along her cubs for a couple of seconds. Sadly, I was not able to get a photograph of them but it is good to know that a new healthy generation is here. From the size I would guess that this is a vixen. 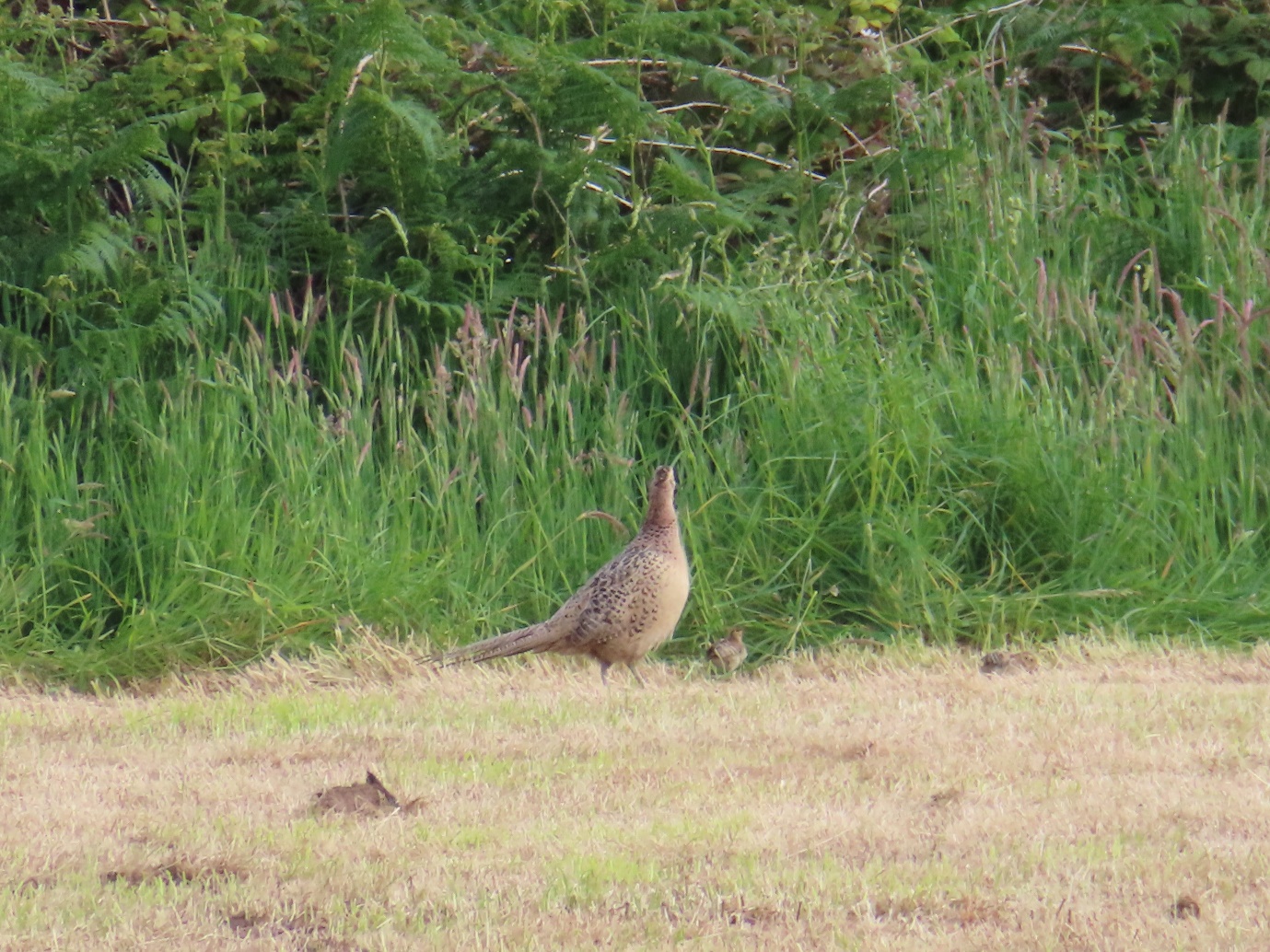 My heart was in my mouth when the pheasant visited the fields with her brood at the same time as the foxes (you can just see a few tiny chicks in the background here) but she shepherded them away at a slight sound. I still can’t get my head around the idea that these creatures living so close together but usually when I see them, they ignore each other. Maybe the fox has easier prey. 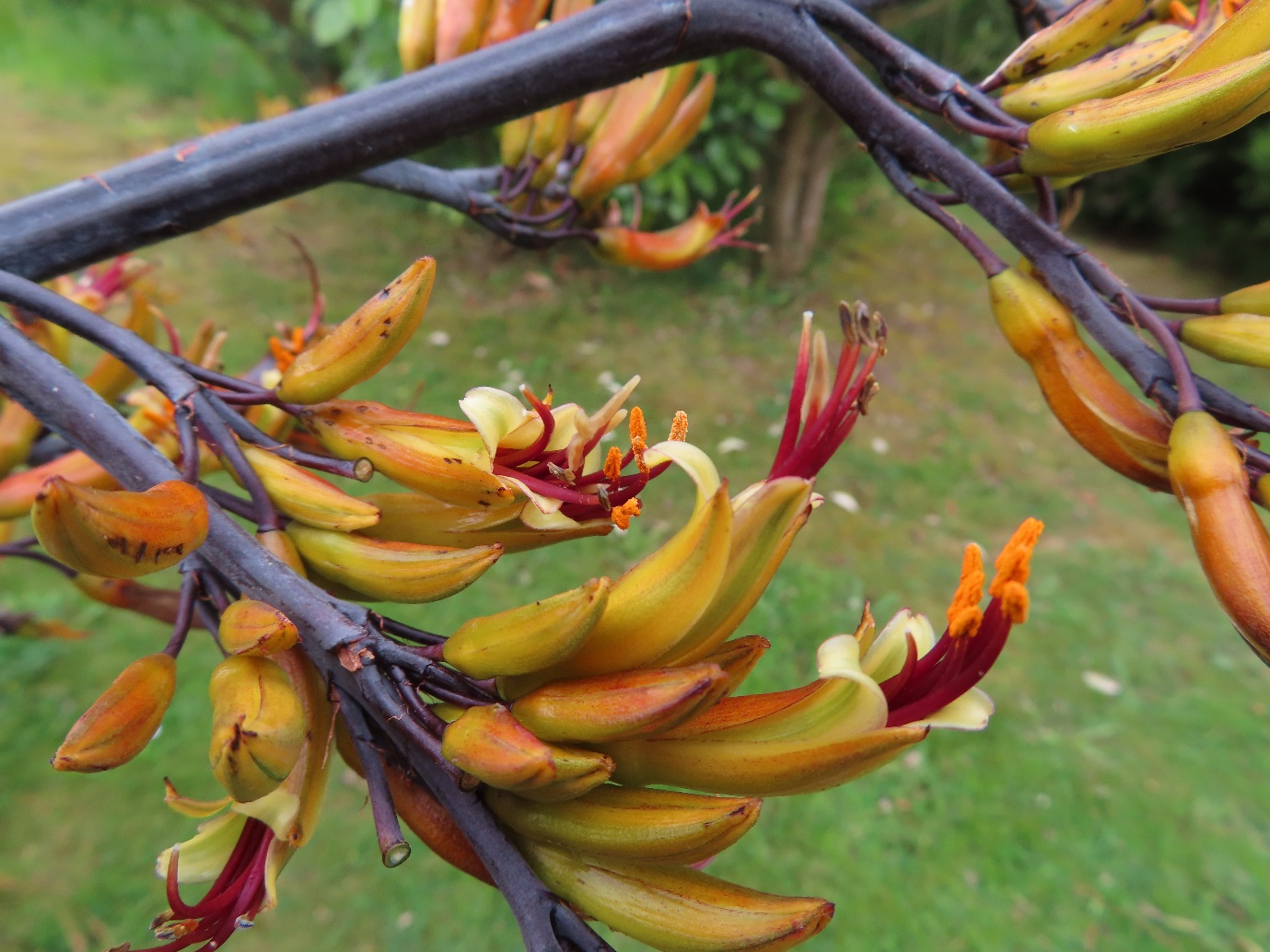 As time goes on, like the Sowthistles, I am beginning to appreciate Phormium more and more. At first, I saw it as a rather ugly but efficient windbreak and nothing else. For the last few weeks, a small flock of starlings has been visiting the garden now that the flowers have appeared. It is amusing to watch the long stalks bounce and down like a ride in the fairground as they feed. They also seem to chatter away at a great rate and I can’t figure out how they do this and eat at the same time. I have no idea where they live but now know that they will be back for the seeds before long. 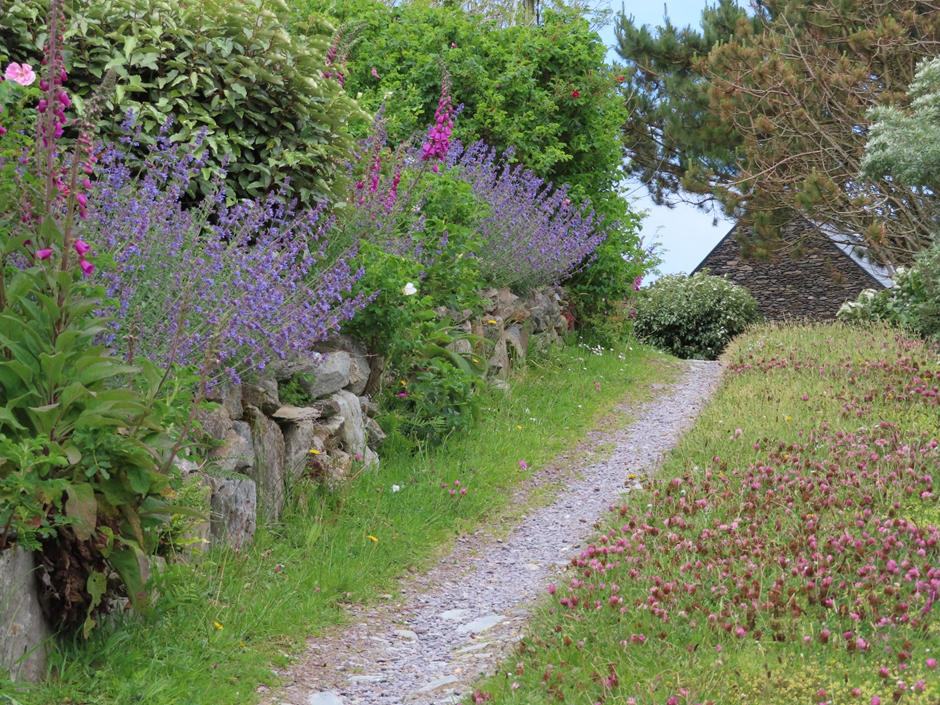 The long rose bed on the driveway continues to feed a multitude of insects. I refuse to allow the centre strip to be cut as it also has a multitude of tiny flowers including clover. I inform anyone that complains that I am not charging for the thorough cleaning of the underside of their car and so far this seems to be working. 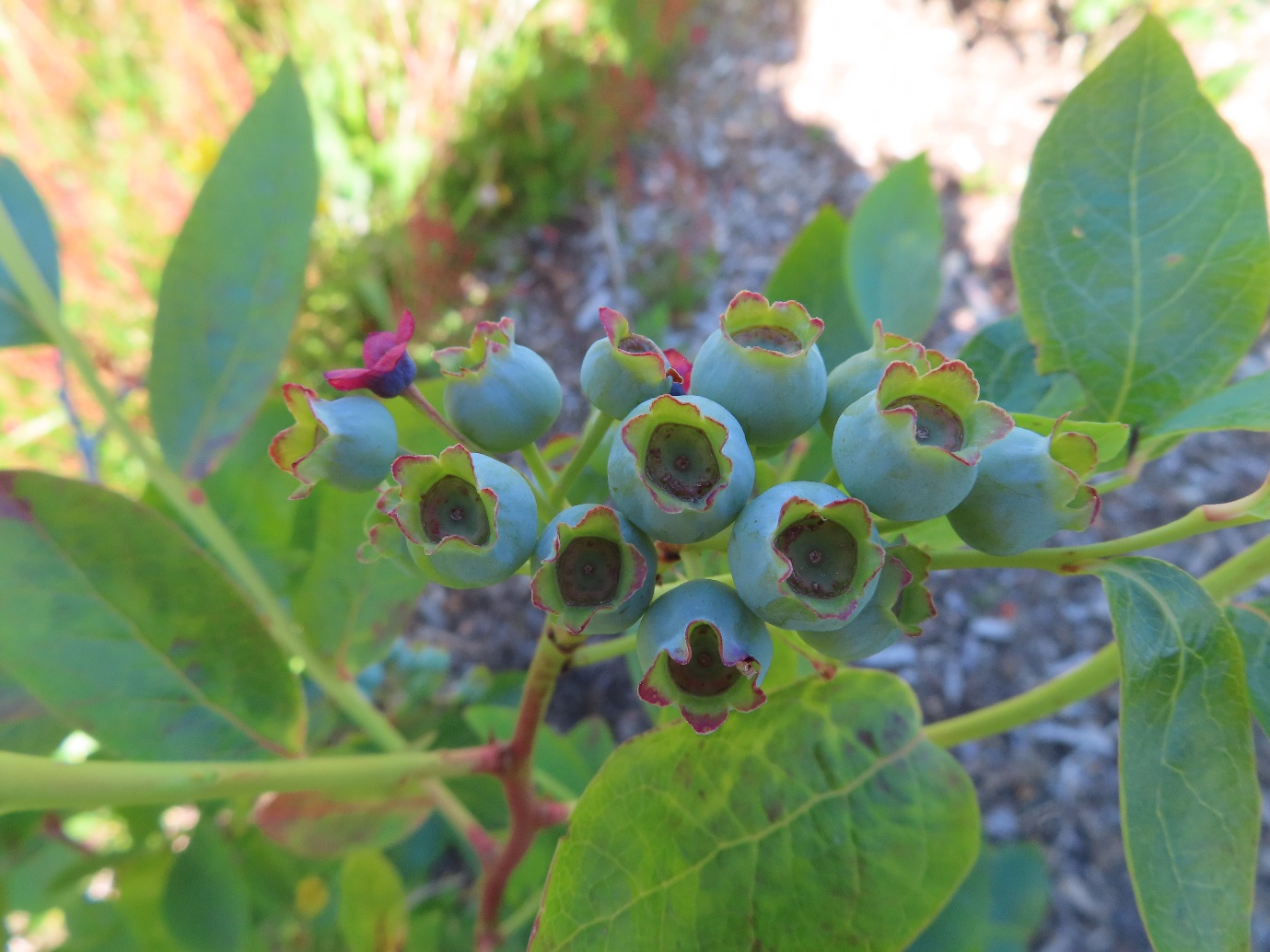 I am very pleased at how my fruit garden is progressing and it now hosts blackcurrants, redcurrants, gooseberries, rhubarb, raspberries, strawberries and blueberries. The autumn raspberries have fruited early this year. Sadly, the blackbirds found this out before I did. Some years ago, I planted a hedgerow and some large trees at the bottom of my field. This area has now become a haven for blackbirds. It is just a hop, skip and a jump up the field to my fruit garden which is where they now spend their days. I did net the strawberries which protected them from my dog Millie, but the birds seem to have got hold of a pair of scissors. I had every intention of building a fruit cage this year but I was sabotaged by a pagoda and raised beds. Next year! Meanwhile I am buying my strawberries from local growers or eating my fruit before it is fully ripe in an effort to thwart the birds. 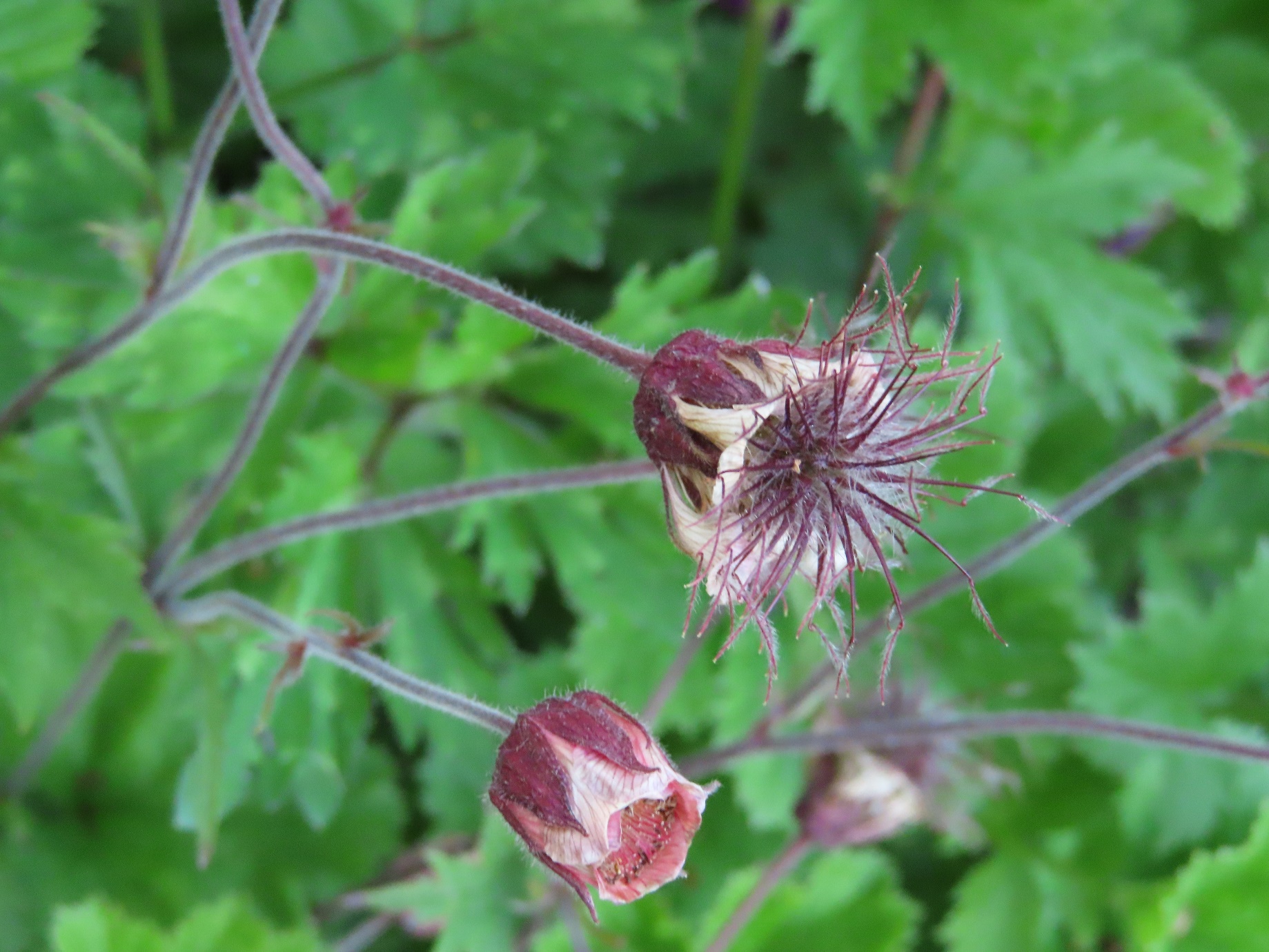 Some flowers are just as or more interesting when their petals fall. This water avens must be one of the most striking. I have used some as a border in one of the gardens and have yet to find two seed heads that are the same. I am sometimes horrified at how long it has taken me to appreciate the beauty of every stage in the life of a plant. 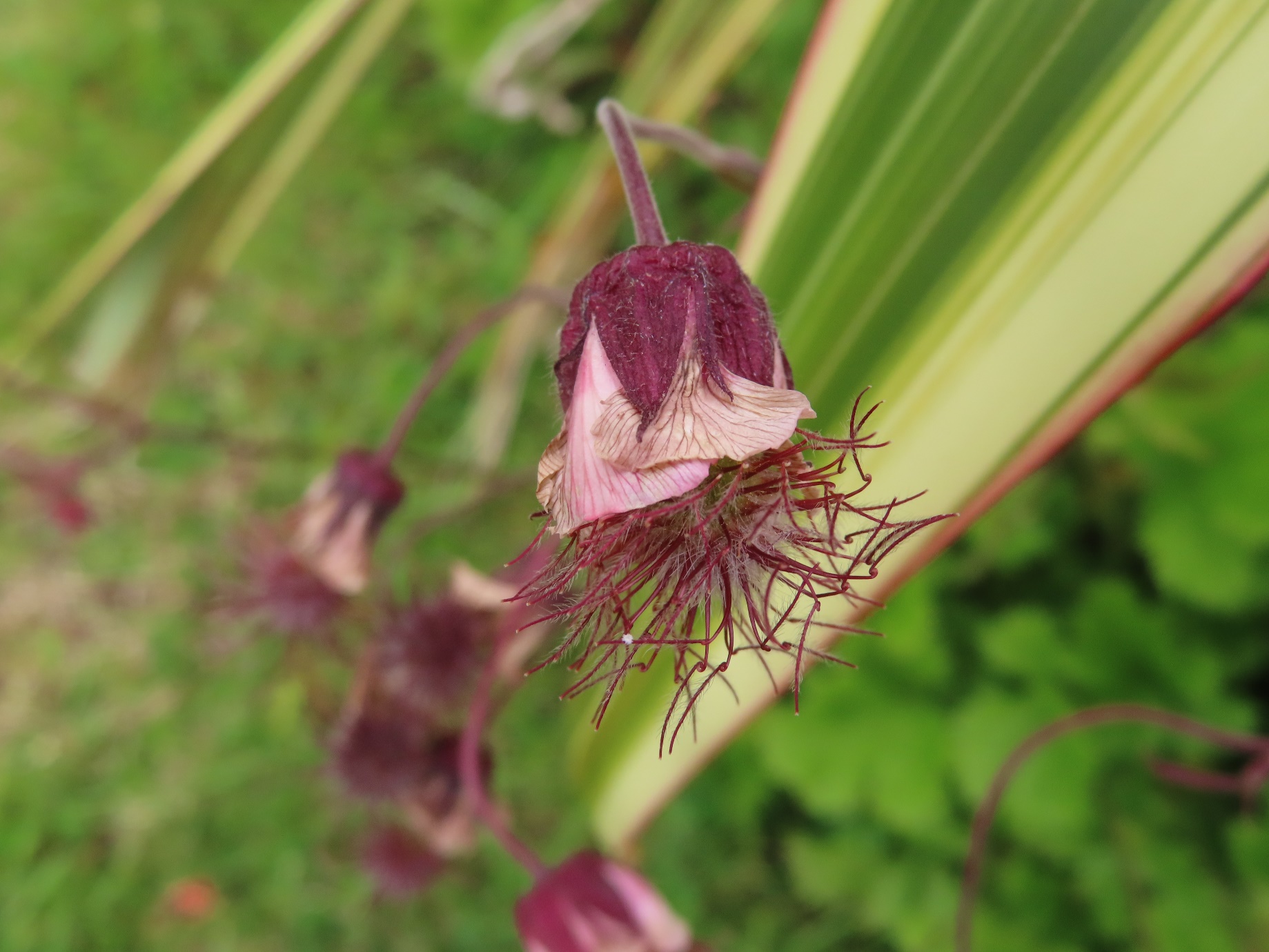 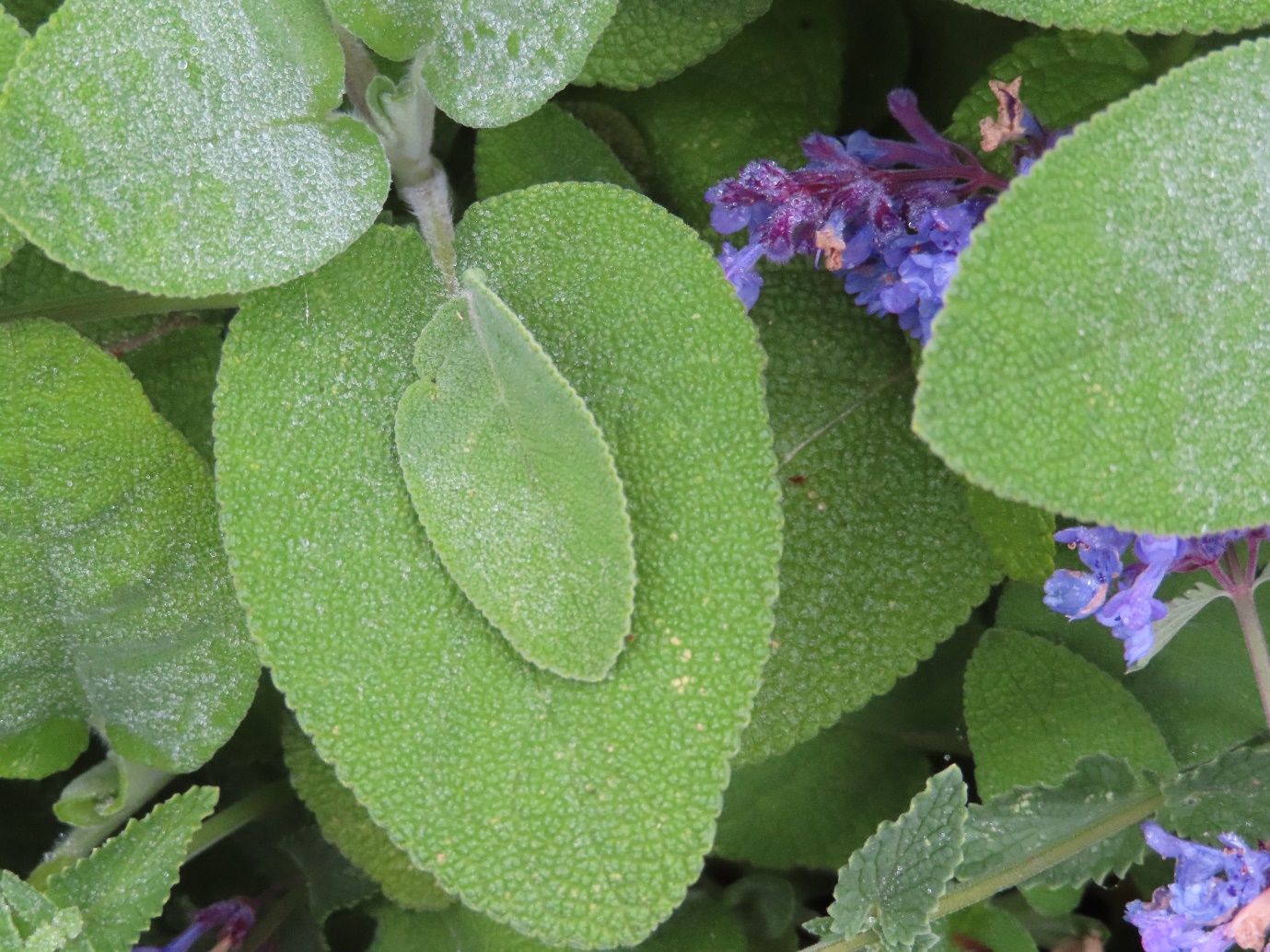 My sage plant has been puzzling me for some time. The small leaf is the size of my usual plants. The large leaf is on a plant growing right beside the others but is turning into a giant. I have no idea why it is growing so big and it will be interesting to see if it continues in this vein. 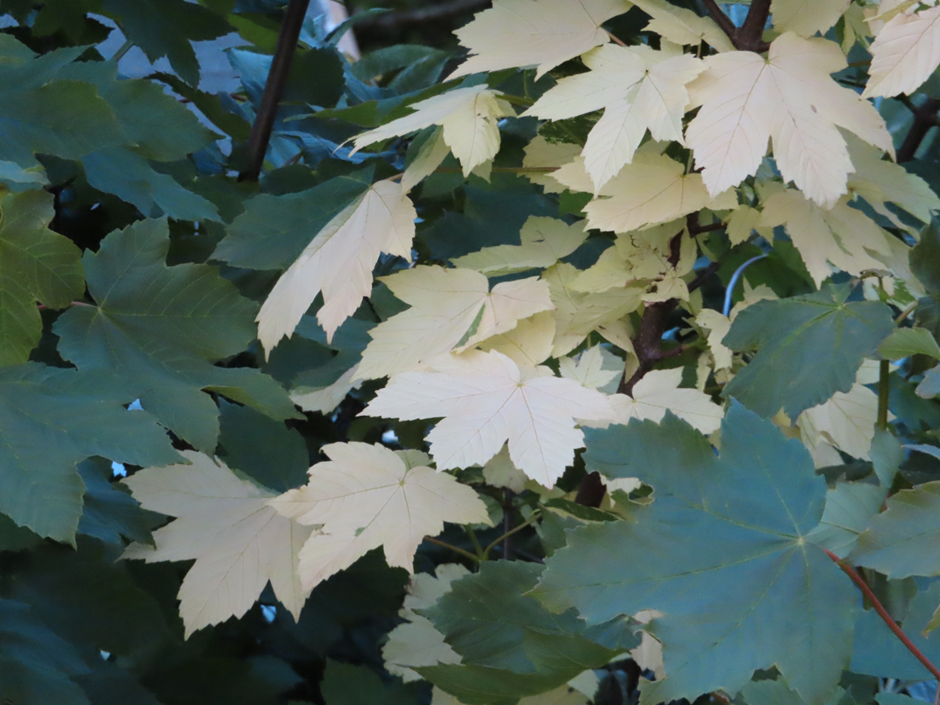 Another puzzle. This is a sycamore that I had cut down as it was going to be far too big for its small corner. It has started to regrow but with one branch producing these beautiful creamy white leaves. My research has only come up with a fungus as a cause although I am sure that this is not the answer. Another job for a winter’s evening.