Monday 20 January
This morning I carried out my daily ritual of walking around the garden to search for the hidden gems that remind me that winter will soon be over. This is in spite of the fact that I was bundled in a warm coat, gloves and hat and had to keep moving to stay warm. The Senecia cineraria (Daisy Miller) below has been threatening to blossom since Christmas day. To my relief not only did it survived storm Brendan but it seems to have the sense to wait out the cold frosts that have been occurring almost nightly since the storm before opening fully. 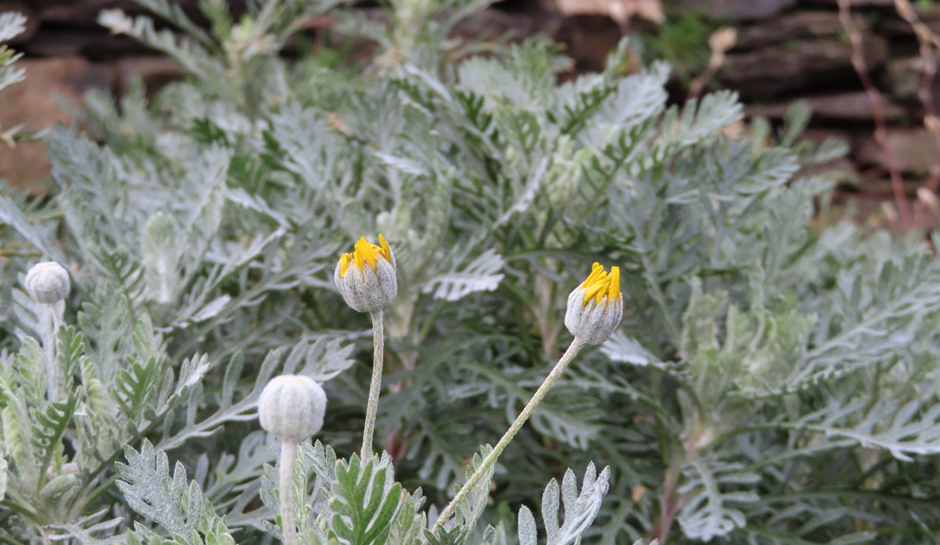 Other aspects of my walk were not so cheerful. The flowers on every hellebore bar two (including the lovely ‘silver dollar’ that I posted last week) have completely disappeared. While my dogs might occasionally trample through a plant it happens surprisingly rarely and they would have had to learn to use scissors to produce the neat, even stalks that were all that remained of the flowers. In addition, I know that they are not very keen on raw Brussel sprouts and most of these are gone too. If my experiences in Scotland are anything to go by tomorrow all that will be left will be stubs an inch or two in height. So instead of preparing beds for my vegetables I have had to resurrect my mothballed rabbit protectors and fence in the hellebores in the hope that they do not suffer any more damage. From this you can assume that I am blaming rabbits. This is based on past experiences. In Scotland the rabbits and deer treated my garden as if it was a gourmet restaurant. As I don’t have deer here it can only be rabbits and I suspect that they won’t be any more helpful than their Scottish cousins. Neither ever showed any interested in my grass when they could have contributed to its mowing and repaid me in part for their food and board. 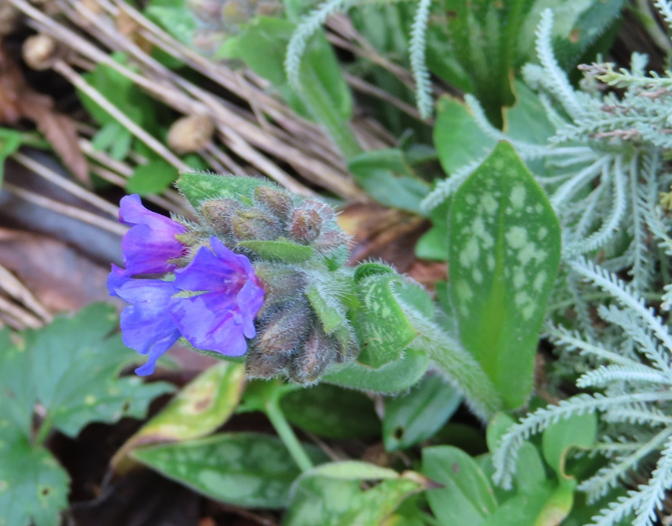 In my experience gardeners are some of the most generous people I have ever known. You only have to admire a flower or shrub in someone’s garden and before you know it the spade and clippers are out and a ‘goodie bag’ of cuttings and plants are prepared for you to take home. To me there is something special about a plant that has been obtained in this way especially as it is a constant reminder of an absent friend. The Pulmonaria above was given to me last year and I had enough to spread it about the garden. This one flower is daring to show its face despite the cold and stormy weather and is a lovely reminder of my friend’s generosity. 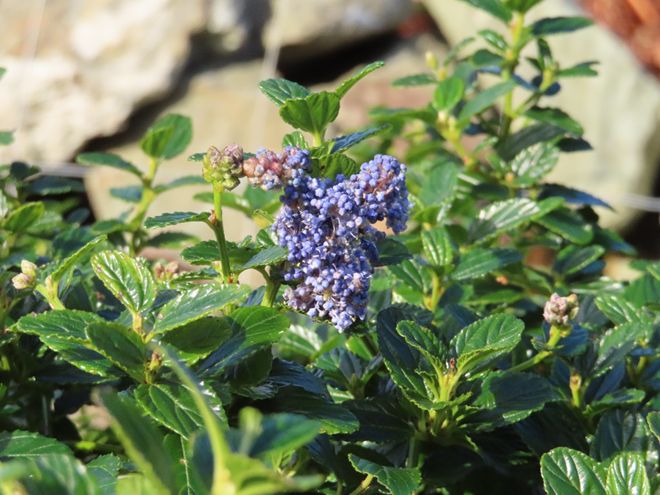 The appearance of the odd flower on a shrub at this time of the year provides me with a great deal of pleasure. However, while I have full confidence in the robust nature of many of the plants in the garden, I am concerned about those that are already flowering long before their time. The plants themselves may survive but as they usually provide food for the bees and insects later in the year these creatures may not do so well. The above Ceanothus Thyrsiflorus ‘Var Repens’ is doing very well in an exposed site but should not be flowering at Christmas which was when the first buds appeared. This is also the case for its near neighbour the New Zealand Tea Tree Leptospermum Scoparium ‘Martini’. It is one of my favourite shrubs and I have had a number of different varieties in the garden over the last seven years. They are covered in flowers for months in the early summer. They are very resilient when it comes to salt and wind but I have lost a number after heavy frosts. If they survive, I can only hope that they produce a second set of flowers for the bees later on. 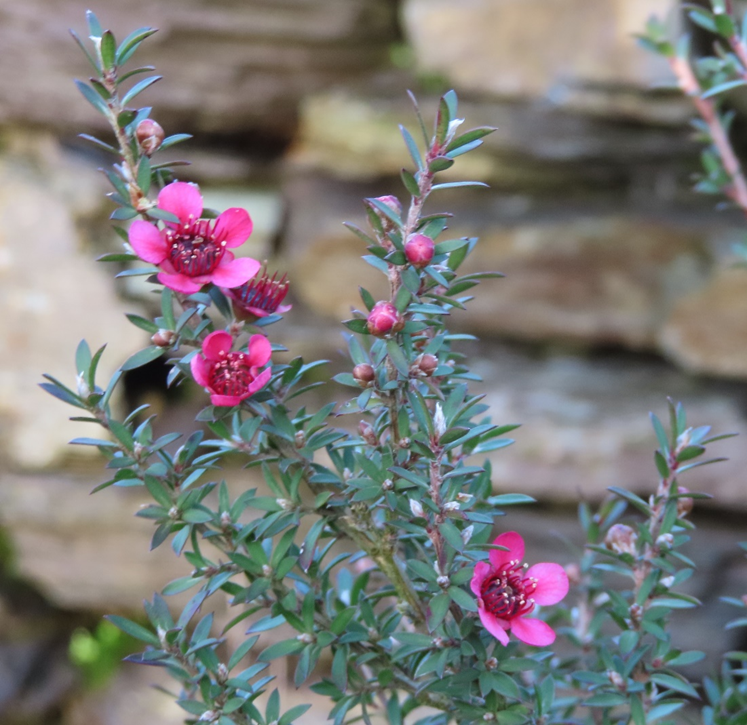 Lawns
I am not really a fan of lawns. Not that I dislike their appearance I just can’t imagine having the time or the patience to produce the manicured, even look that you see in gardening magazines. It is not that I have not tried I just have not succeeded. This may have something to do with the habits of my canine companions coupled with very wet winters. My dogs are ‘youngish’ and still very energetic. They also have set routines. First thing in the morning it involves a race to the low wall overlooking the valley to scan for possible invaders. This is followed by repeated laps around the garden at high speed. You can track their journeys by the trenches they produce in my so called ‘lawns’. Given their speed I should be grateful that they are remarkedly adroit at avoiding the many young shrubs dotted about the garden. However dry- stone walls do not deter them so another one of the many non-gardening tasks that they create for me is replacing dislodged stones. In the past I have tried to fill in the trenches they recreate and reseed in Spring but for all my efforts I am not sure that it looks much better than the areas that I ignore or the new trenches that are developed as the dogs carefully avoid my reseeded areas. I am now resigned to the fact that at best I may have ‘grass’ but never lawns but at least the dogs are happy. 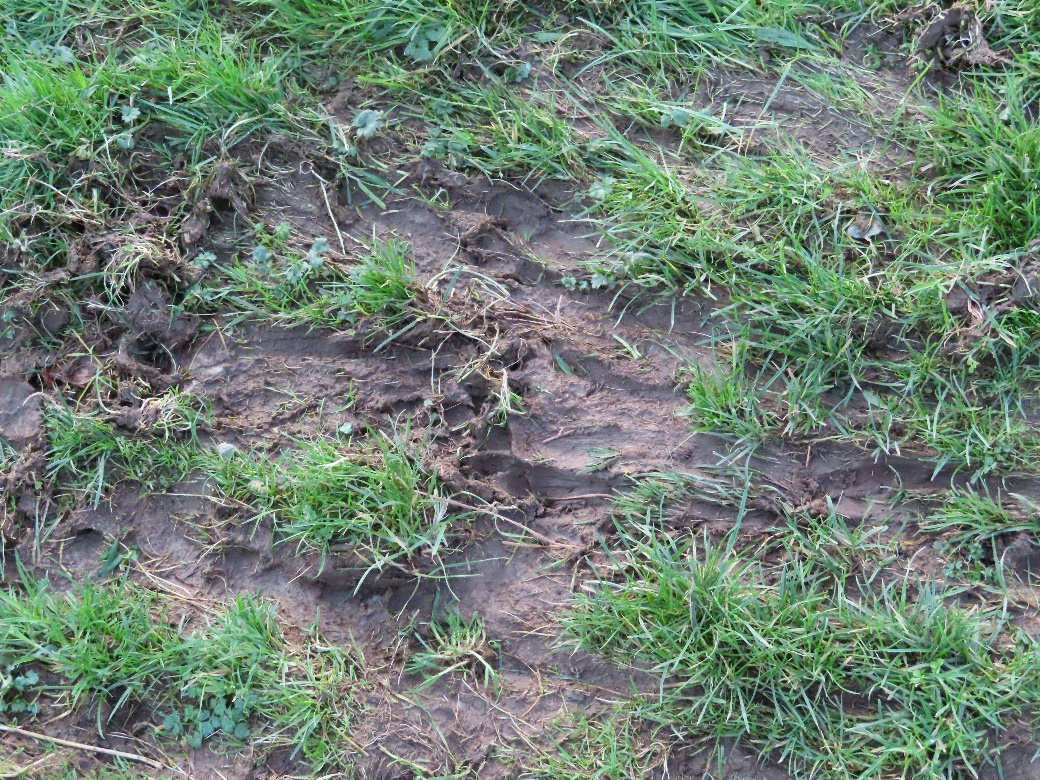 The dogs’ launching pad for the stone wall overlooking the valley. This was once part of a ‘lawn’.

Other forms of winter colour: the willow family
While there may be a shortage of blossoms at this time of the year it is the best time to see some of the evergreen foliage and colourful bare branches dotted about the garden. The photo at the top of this post is a constant reminder of the quirky nature of my garden. A small steep slope on the north side of the garden is bordered by a boggy trench in winter. This allows a Eucalyptus to grow side by side with a moisture loving Salix. Both are cut back on a regular basis to ensure that they look their best and produce the most vivid colour. This willow was one of six that were blown down in the hurricane force gusts of wind produced by storm Darwin. As it was the only one that any roots left in the ground, I dug it back in, cut It to the ground and hoped for the best (although I expected the worst). Not only is it thriving but I have used cuttings to produce plants all over the garden.

The photos below of the willow ‘salix Chaenomeloides ‘Mount Aso’ were taken a couple of days apart after Christmas. The plant is unremarkable for the rest of the year but I particularly like the winter colour of the bud and the shape which turns it into a bird’s beak as it opens. 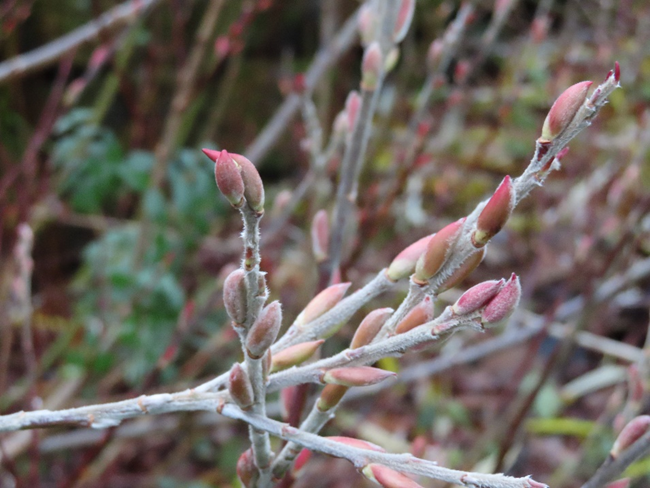 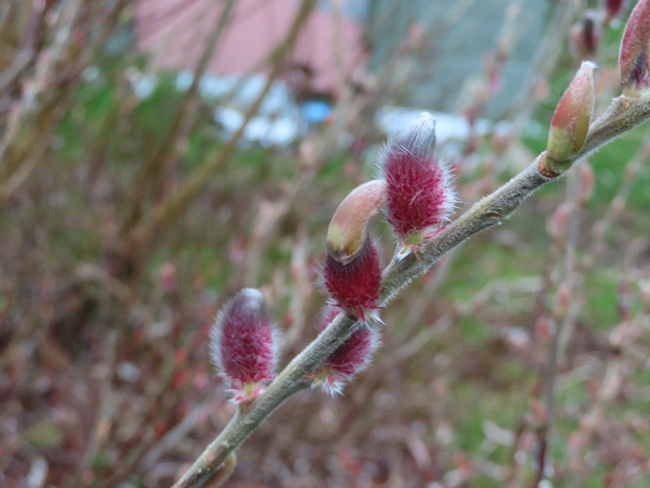 (25 January 2020 Update: today I discovered that sadly, the rabbits also like this plant and have even climbed up my dry-stone wall to strip much of the lower and middle branches of buds).

The Camellia Williamensi ‘Jury’s Yellow’ is usually the second camellia to flower in my garden and the bush is now glowing with colour. When I first arrived here there was no garden as such and as I had collected over 100 plants, I had to find temporary sites for all of them. I placed this by a boundary wall at the edge of a clutter of trees. Most of these were felled by Darwin or had to be removed after the storm. The camellia has done so well that I was reluctant to move it. After nine years it is as happy as ever in the location. The petals are perfect at the moment but they will turn a less pleasing orange/yellow if exposed to frost. 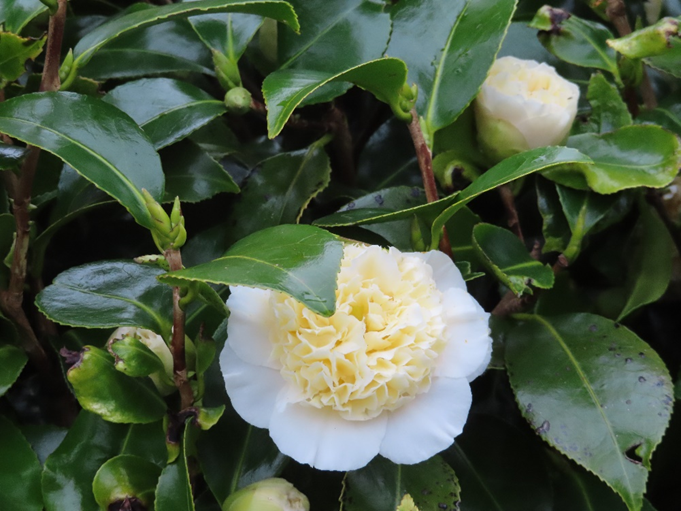 Christmas tree update
I have been reliably informed that it is bad luck to bring Hawthorn flowers into the house. I am hoping to avoid the consequences on a technicality. I brought a dead hawthorn branch into the house. It was the branch that introduced the flowers not me. In addition, the first thing that I did when I started developing the garden was to plant a Rowan tree near the house to ward off evil as dictated in Scotland. Fingers crossed.

29 January 2020
The good news is that my Brussel sprouts are still in place. The bad news is that my purple sprouting broccoli now consists of eight six-inch stalks. Tonight, I watched the dogs tear about the bed containing my hellebores and pink willow as they caught the scent of a rabbit. I can’t decide what is worse: the destruction caused by the rabbits or the destruction caused by the dogs as they try to catch the rabbits. It is at times like this that I dream about the use of concrete as a gardening style.