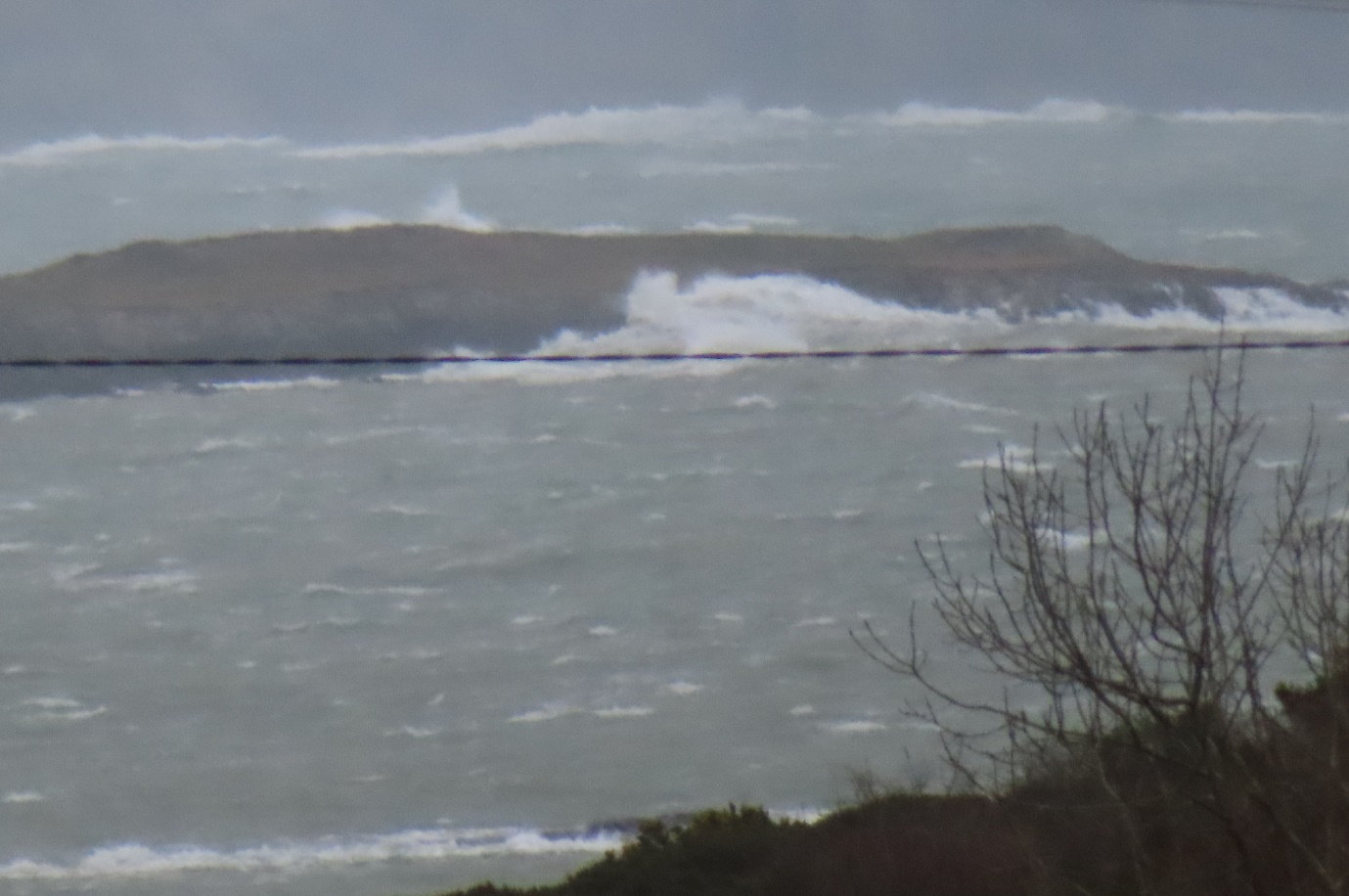 The above photograph of Roaringwater Bay was taken from my window during the height of Storm Dennis. Skeam West island is in the foreground and you can just see the waves on the cliffs of Cape Clear in the background. There were times when the waves almost reached the top of the Skeam and it certainly was not a day to be out at sea (or on the island for that matter).

Today the storm is accompanied by thunder and lightning and I am keeping my fingers crossed that the electricity holds. The forecast for the next ten days can only be described as brutal.

Today we had a brief respite from the storms that have been raging since Saturday. Four days in all. The ground is now a soggy mess so gardening is out of the question. For some strange reason I decided to take advantage of the weather and clean the windows of the house which were encrusted with salt. Now at nine in the evening they are being battered with some of the heaviest rain and hail that I have ever experienced. There are two possible outcomes to this. If the wind is in the right direction the windows will be sparkling and clean once the storm is over. The other (and more likely) option is that they will again be encrusted with salt. I think that this is a metaphor for living and gardening in this exposed location. Basically, you can’t win. The amount of salt on the window is probably an indication of the amount of salt that my poor plants have had thrown at them this week and I can only admire those that seem to cope without an effort. 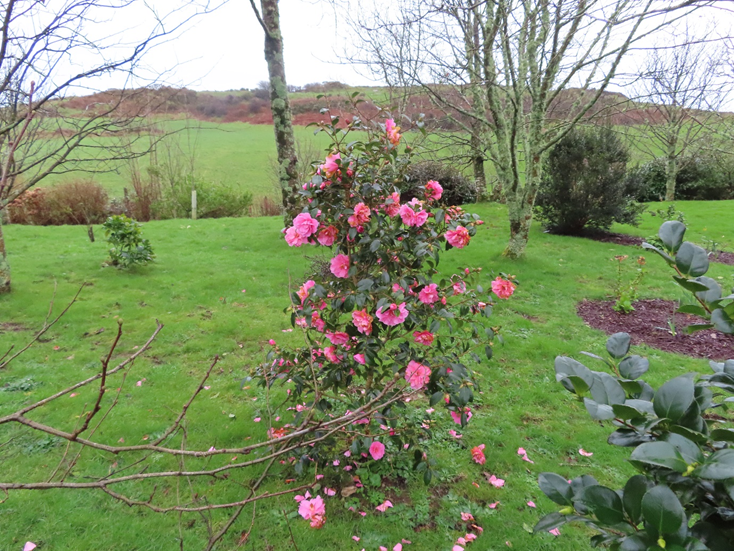 A young camellia in the copse before the storms. Because of the steep hill to the south of the copse my hedgerow there is not high enough to protect it so this area is exposed to the south and south east winds. These are proving to be the most damaging winds but, as you can see, the camellias are flourishing. For this reason, I have dotted the copse with small shrubberies which I hope will provide some shelter as they mature.

Camellias are one of my favourite flowers and since I moved in here, I have been adding one or two plants a year. They are very robust and are untroubled by salt. The blossoms are another matter and some of the camellias have taken a battering. Four of my more mature shrubs are covered in blossoms. Storms Ciara and Dennis have turned them into shredded wheat. All the rest are just ready to open and I can only hope that they hold back for another week or so. 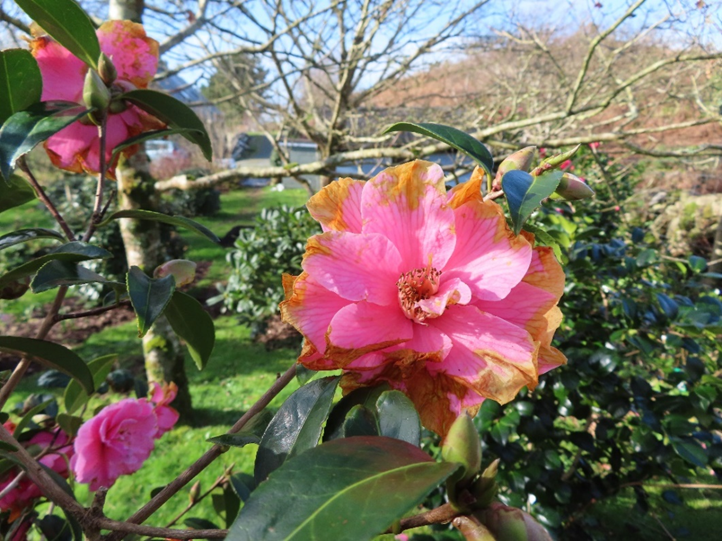 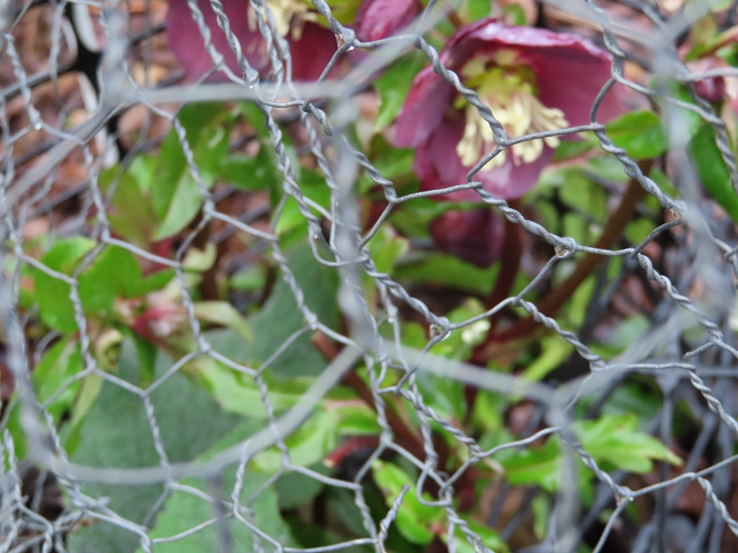 Recently, when looking through photos of previous gardens I noticed that chicken wire is the predominant feature in each one. Over the years I have enclosed gardens with it, made individual plant protectors or wired off specific sections of shrubbery or vegetables. This means that I have to live with the place looking like a high security prison until the plants are mature enough to be unattractive to rabbits. Realistically the only true way to keep the creatures out of a garden is the first option. This is not really possible here so I have to resort to one or more of the other three. The above photo of one of my few remaining hellebores gives you a sense of the results. Shrubs and plants seen through the haze of wire. I managed to surround this particular hellebore with chicken wire after the assault on the others in the garden and before the rabbits found it. It is of one of my two remaining hellebores that are planted in the garden as opposed to in tubs directly outside the house. Yesterday I decided to see if I could get a better photograph only to discover that all that is left is the now familiar tell-tale six-inch stumps. The rabbits have knocked over my ’protector’ and had a feast. 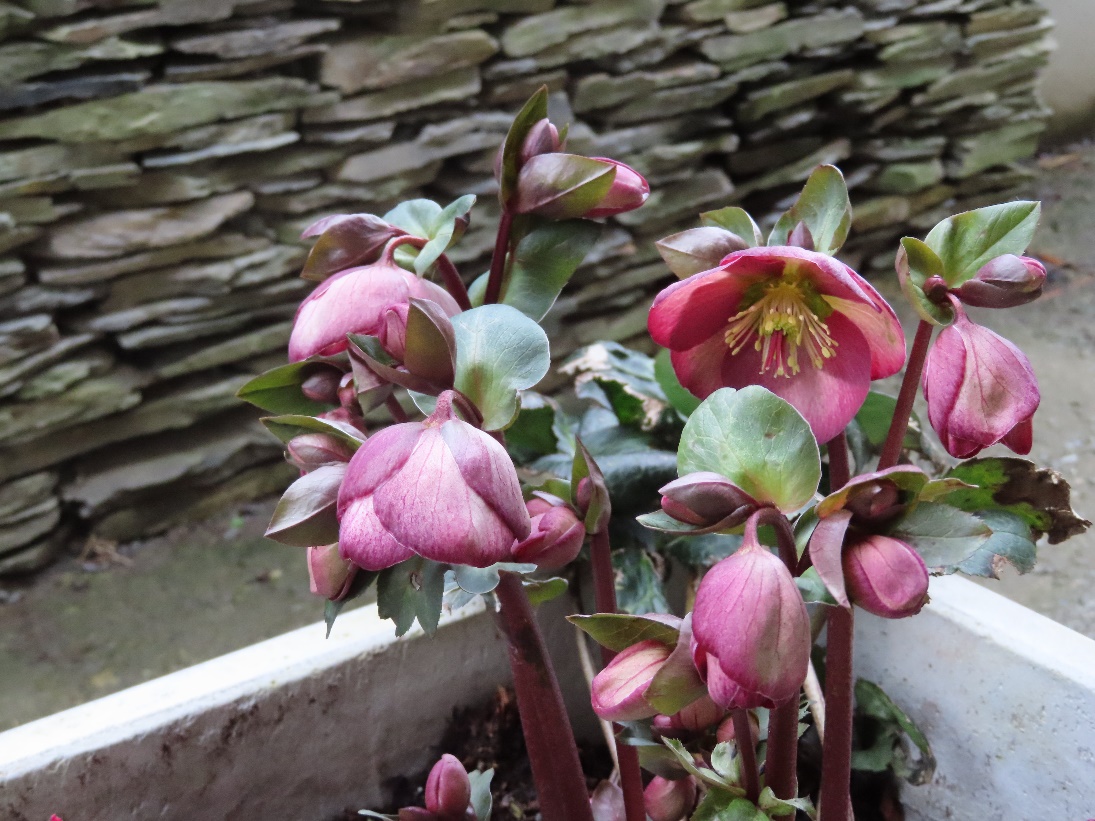 At the moment the only safe place for Hellebores (this one is ’Dana Dulcet’) appears to be outside my back door. 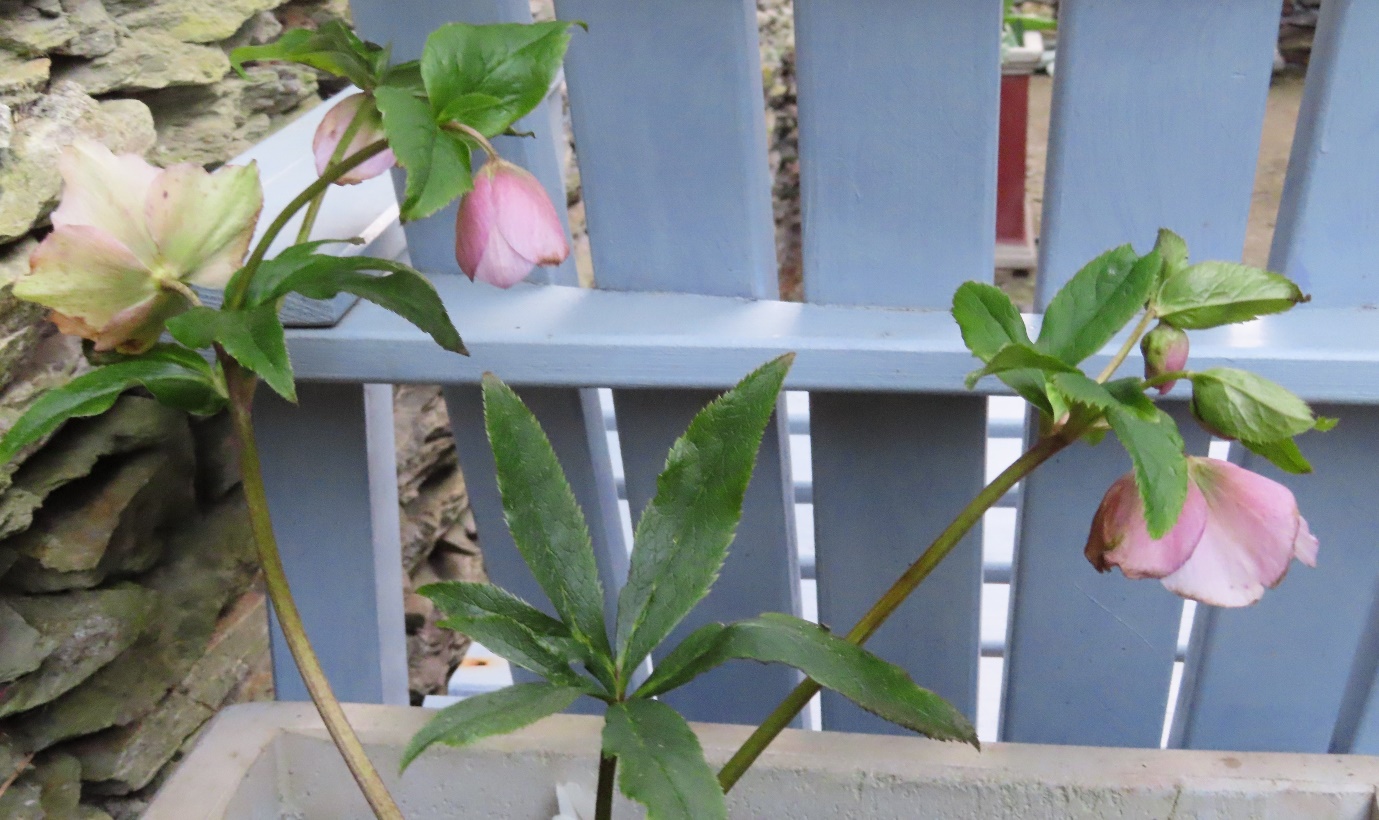 My latest purchase Hellebore ‘Pretty Anne Pink’ also at the back door in the hope that it can mature without harassment.

When I first moved to this home nine years ago the rabbits were well established and totally in control of the area. After three years or so they suddenly disappeared. This is likely to be due to myxomatosis, a disease that I would not wish on my worst enemy, let alone rabbits. They are obviously back with a vengeance and while I am glad that they are healthy I don’t see how I can protect all new and young plants without making the place look like a chicken coop. I am experimenting with surrounding young plants with sticks but more as a way of feeling that I am doing something rather than in the belief that they will be effective. It has been suggested that I distribute human hair around the garden to repel the rabbits. Apparently, they don’t like the smell. To cover a garden this size would require me to visit all of the hairdressers in West Cork, presumably on regular basis. Apart from getting the reputation for being eccentric I would spend most of the time on the road rather than in the garden. I am now trying my own unique approach. Each day I try to clear up after the dogs have performed their toileting rituals. I am now distributing the results along the drystone walls surrounding the property. I have no idea if it will work but I am testing the theory that if the rabbits don’t like the smell of humans, they should hate the smell of dogs who can run a lot faster than I can.

Believe it or not I don’t have a problem with rabbits per se and could never kill one. In fact, when one of my dogs caught one many years ago, I was in the process of trying to contact my vet to see what he could do when the poor creature expired. (the rabbit that is not the dog). I suppose I should be glad that the presence of dogs ensures that they don’t live in the garden and just visit at will. But as far as I am concerned if they live next door they should eat there too. In fact, I am sure that I have seen some nice delicate plants in my neighbours’ property to tempt them. Probably not luxury food such as hellebores though. Maybe I need to have a word with my neighbours about their choice of plants! 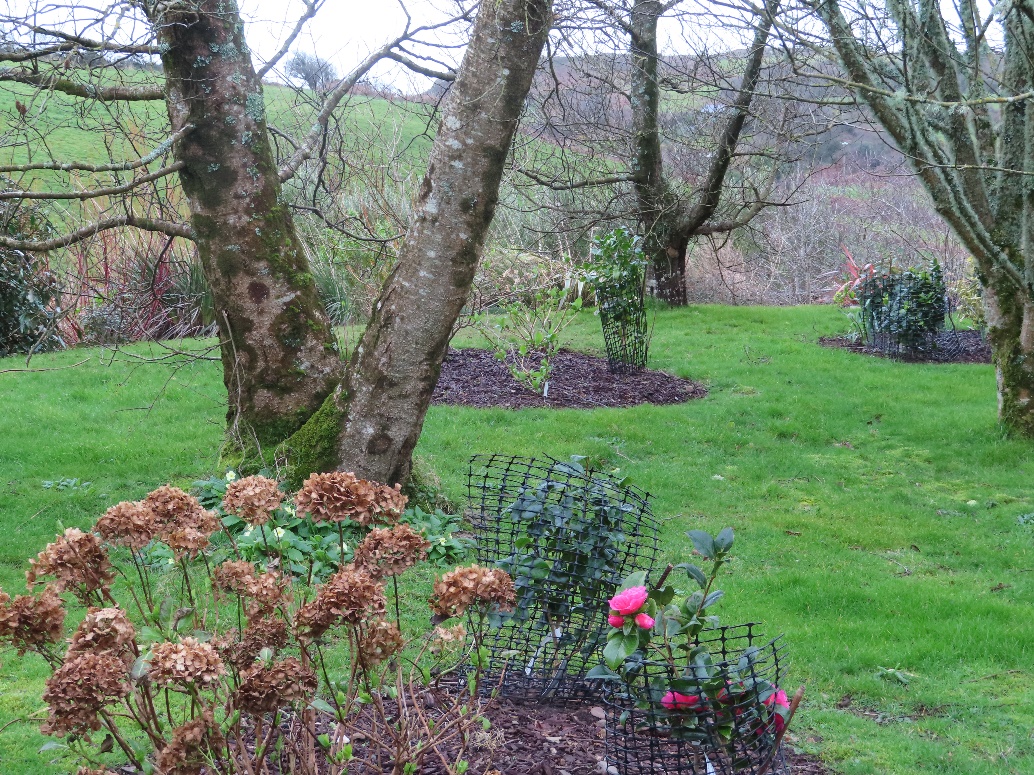 Another view of the copse after I have surrounded my new camellias with plant protectors. 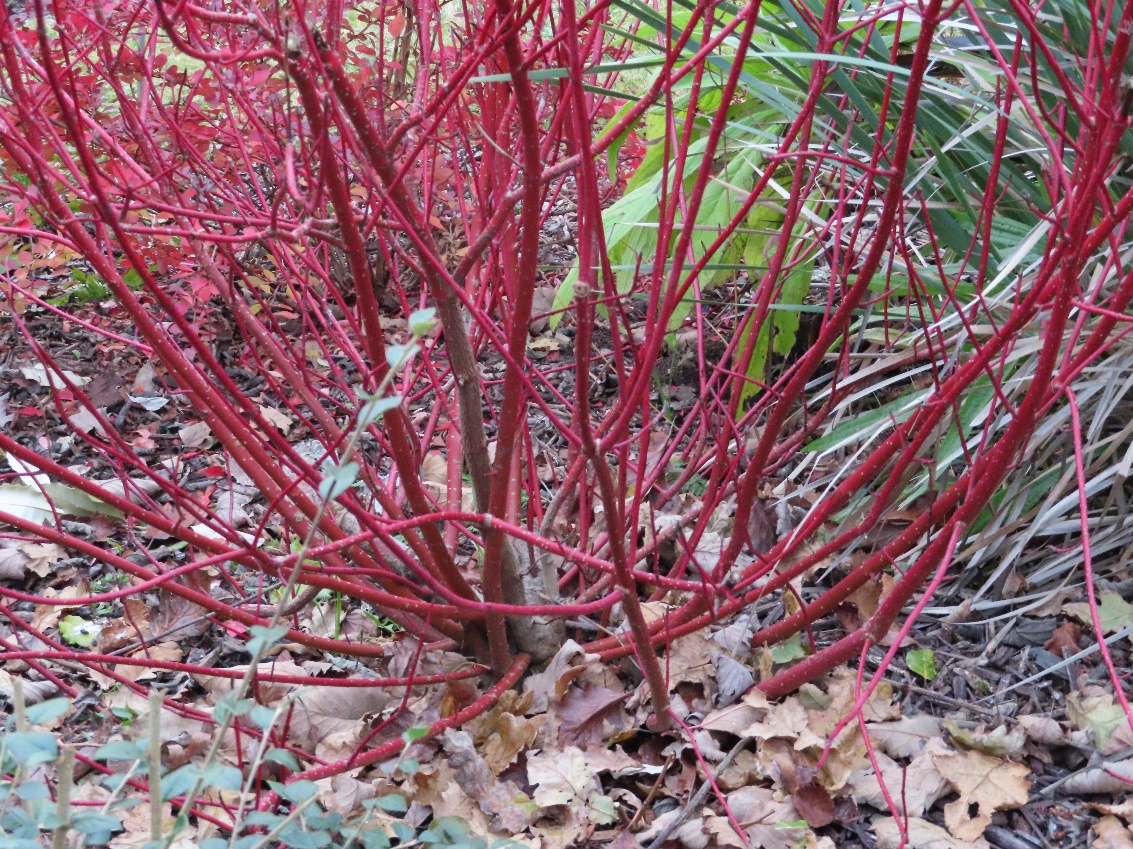 Cornus Alba ‘Siberica’ in one of the hillside shrubberies. 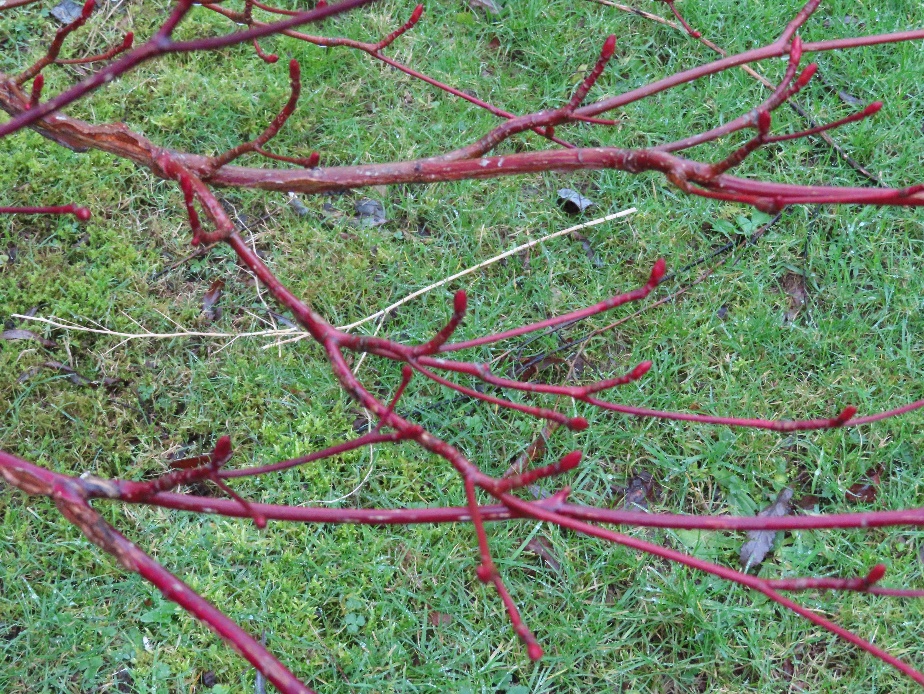 The small tree Cornus Controversa Variegata is rather dramatic in Summer with its variegated white and green leaves and a tiered ‘wedding cake’ shape. Its lovely wine coloured stems are totally hidden until winter when they add a little colour to the copse. 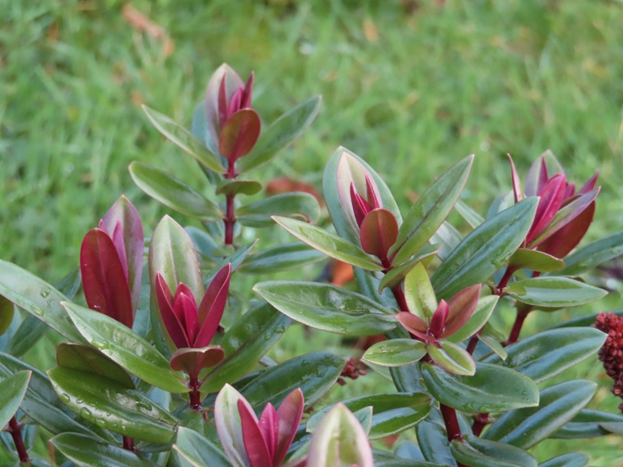 Signs of spring: despite the weather this Hebe seems to be flourishing in the standing stone garden.

I have hated shopping all of my life and would avoid it if I could. When buying clothes, my ideal scenario would be that once a year I venture into one shop and see something that I like. It is a perfect fit and comes in 10 different colours all of which I buy. The dreaded task is then out of the way and my shopping is now over for the year. There is one exception to this ‘pet hate’ : visiting garden centres. I could ‘shop’ at these at any time of the day or year and can spend hours browsing and just wandering about and generally having a good time. In between storms last week I paid a visit to Future Forests my favourite garden centre of all time. I first discovered it nine years ago when I moved into this house my first permanent base since leaving Scotland. My new, long driveway was separated from one of my fields by a barbed wire fence. Another similar fence bordered the hill behind the copse. Obviously as neither of these offered any shelter from the winter gales planting a hedgerow was a priority. Future Forests has an impressive range of bare root trees and I had a backbreaking few days digging hundreds of them in before Spring arrived. To my amazement they all survived the first year and continue to flourish despite their exposed position and rather rushed planting. 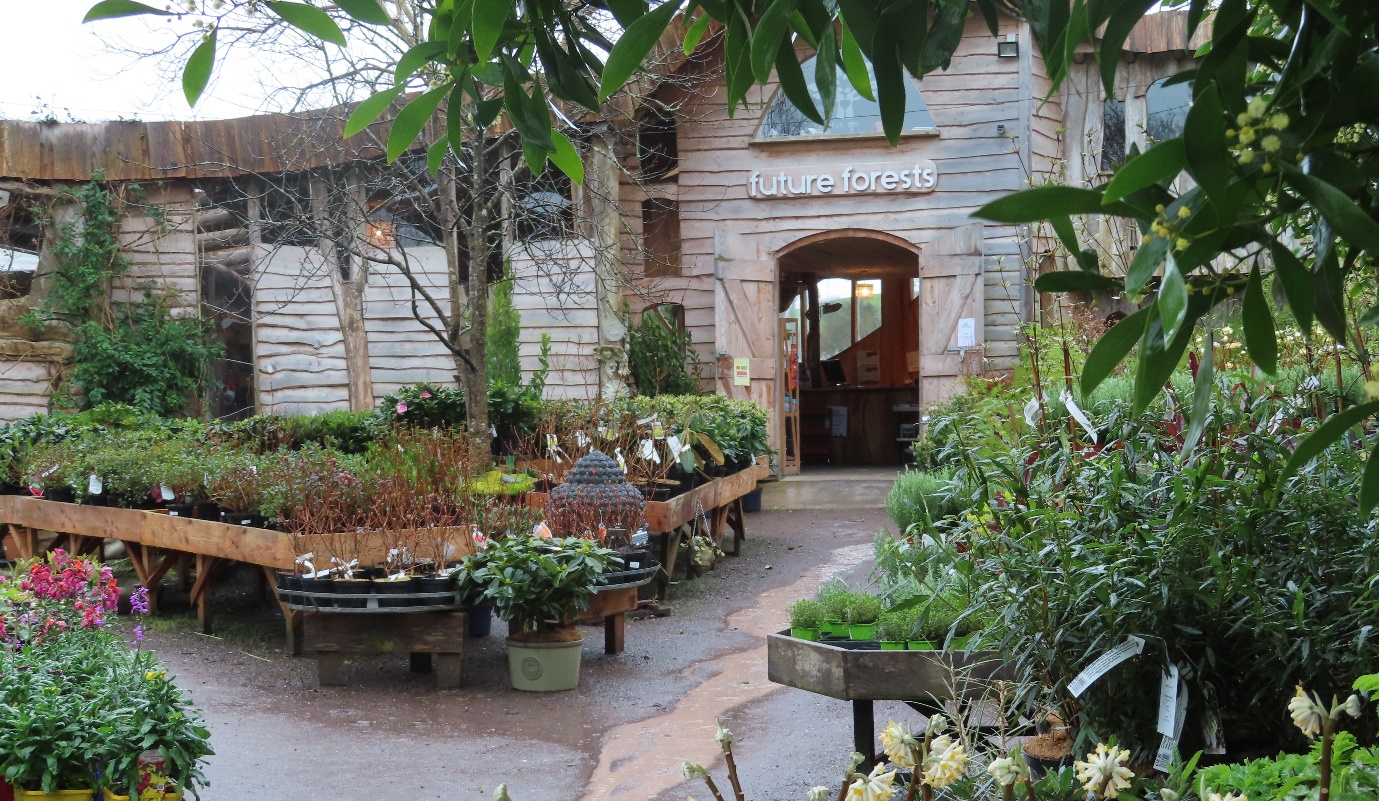 The purpose of my visit last week was to purchase some raspberry canes and organic compost. Visits to the nursery remind me of a memorable event in childhood. On a trip to York one of my uncles arranged a visit to Rowntree’s sweet factory. At the end of the tour we were taken to a room where a long table was covered with bowls of all of the sweets and chocolates that the factory produced. It was a child’s idea of heaven. The only problem was deciding where to start and what to choose as I obviously could not eat them all. Every time I walk into Future Forests it is like walking into that room again. Last week everywhere I looked I could see something that I would like to have in the garden. As usual there were varieties of plants that I had never seen or heard of before. As I walked through the first section of the displays, I found two new Camellias for my collection, a magnolia, a black willow Salix Gracilistyla Melanostachys and a beautiful new Hellebore. I was able to resist the temptation to buy some stunning varieties of Witch Hazel but made a note to find a sheltered spot for them next year. I left for home feeling very pleased with myself despite the fact that my purchases meant that I would have to start a shrubbery in a new part of the garden a year before I had planned. It was only when I got home that I realized that I forgot the raspberry canes – the sole purpose of my visit. This is not unusual. I get completely distracted by the stunning selection of plants and end up having to make a return visit. I made the return trip a week later and did remember the raspberries but as I also bought three or four more new shrubs it is obvious that my self-discipline is not improving.

After weeks of rain and storms it seems as if Spring has truly arrived. The ground is too wet for working but I managed to get some ‘lawns’ cut. This may be the last opportunity for a while. Storm Jorge arrives on Saturday and torrential rain is forecast for tomorrow. Grass cutting is now replaced by my ‘storm defence’ preparations.

3 responses to “Fenced In”