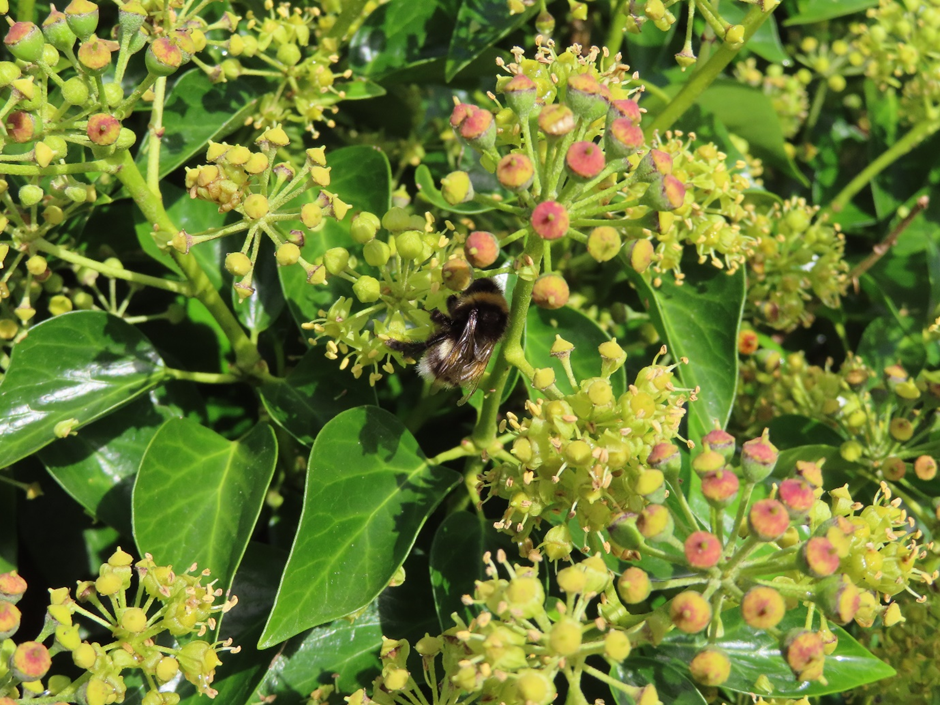 It has been a very strange autumn in the garden. In the last few weeks bumble bees, hoverflies and even the odd butterfly have made the occasional appearance on sunny days. The holly offers plenty of food but some of my catmint plants have started to flower again and are equally popular. Even the Eleagnus flowers are attracting bees and a few wasps have returned to soak up what appears to be an endless supply of honeydew. I thought that the recent storms and torrential rain would mark the last of their appearances until next year but this has not been the case. 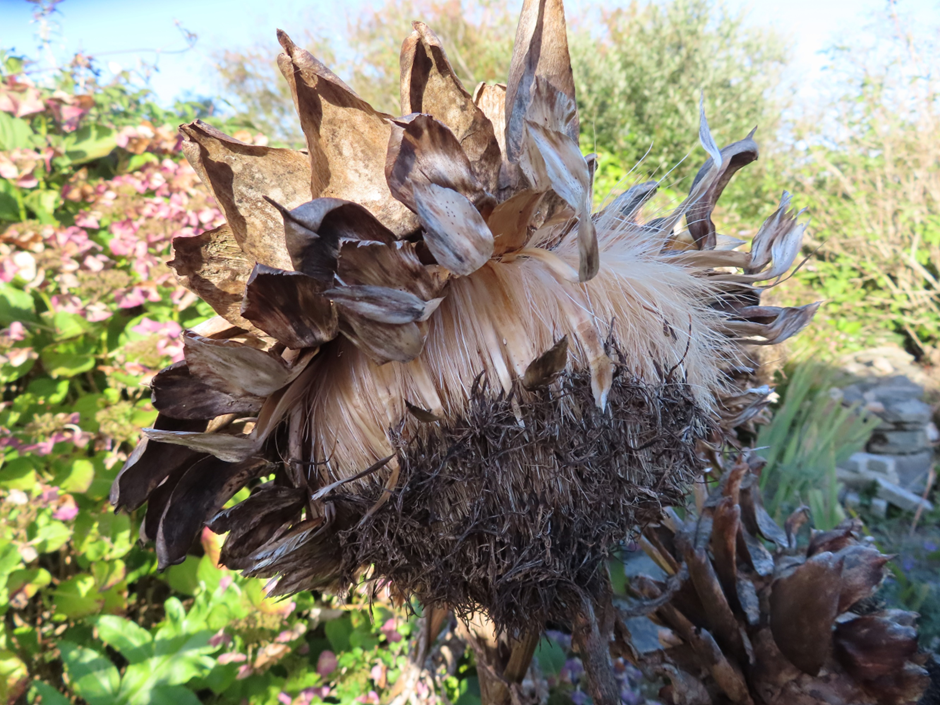 My artichokes have developed a split personality as this year’s fruit and flowers look as they have dressed for bonfire night or Halloween. At the same time next year’s buds are growing rapidly and seem unperturbed by the storms. This is despite the fact that some references suggest that while it can tolerate strong winds the artichoke can’t tolerate maritime exposure. If it were more ‘maritime’ here the artichoke would have a mooring in the nearby cove. This plant is at least four years old, gets no attention, is loved by birds, bees, moths and butterflies and its flowers are like giant thistles. At this time of the year, it looks as if I have a family of nodding scarecrows at the front of the house. No wonder I like it so much. 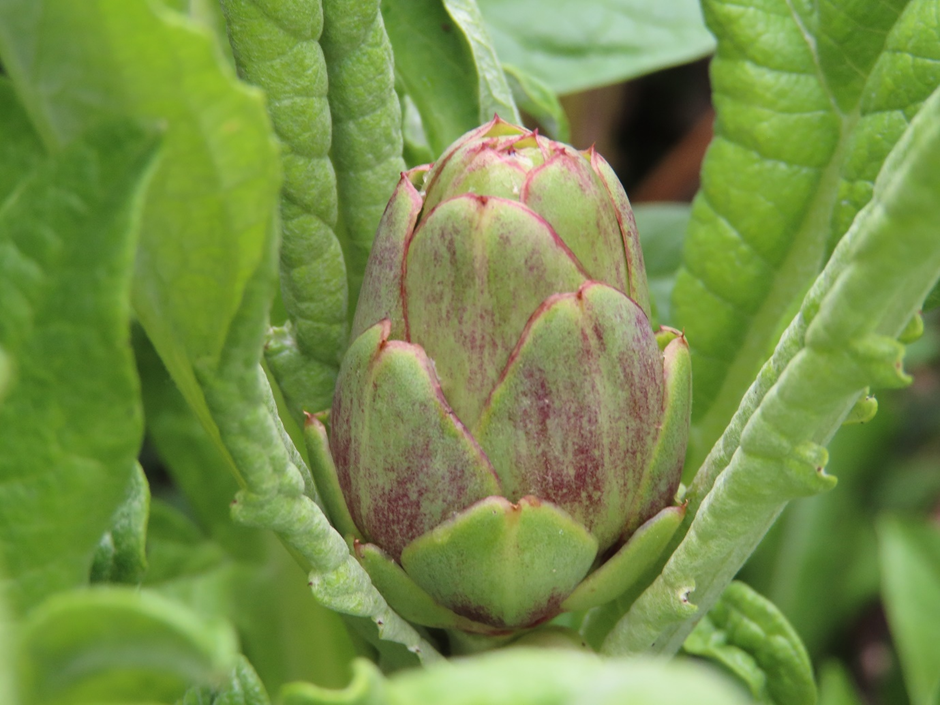 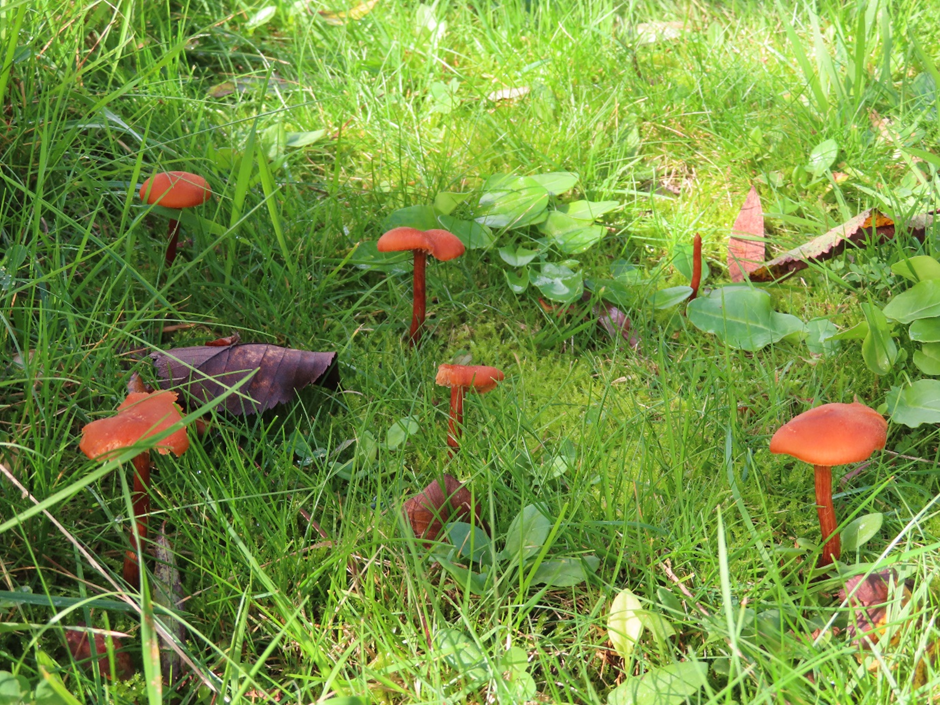 Due to a temporary hip problem, I have avoided the steep hillside on the east side of the garden for the last couple of months. From the top of the hill, I could see that the dry summer sun had scorched the grass paths and exposed more and more rock. I have been contemplating whether I should replace them with steps to avoid further erosion and possible falls on my part. However, on a recent visit I discovered that the lower parts of the path are now covered in damp moss and are sporting a veritable forest of mushrooms and puffballs. The rust, yellow, white and green colours are a thing of beauty and there is no way that I can cover the area in stone, mortar or even wood for that matter. Maybe I can ski down in future as the shrubbery at the bottom offers a relatively soft landing. 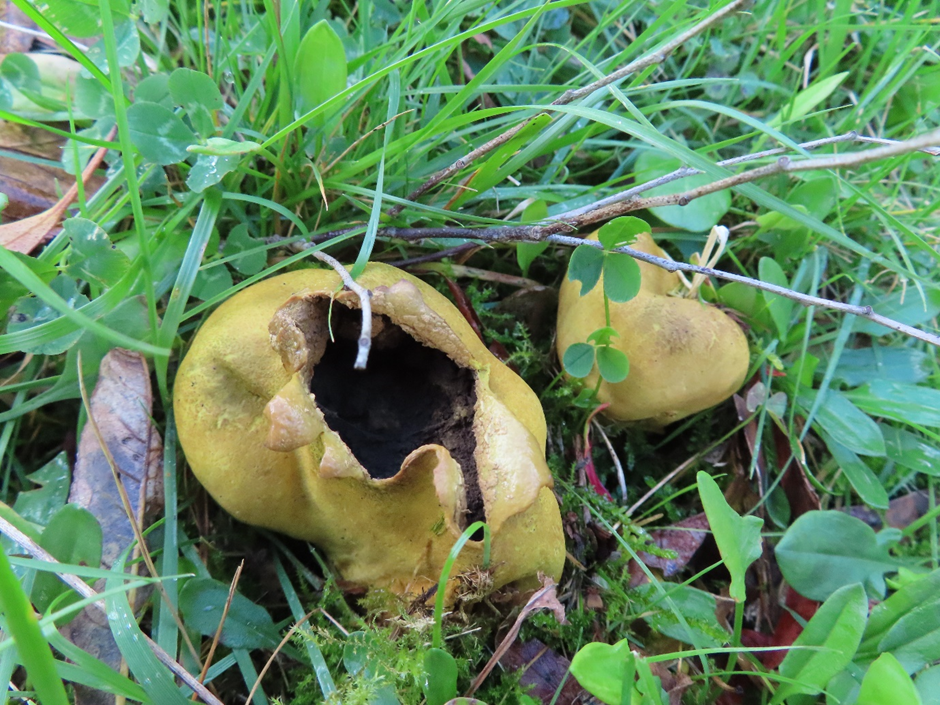 Because of my hip I am unable to do much in the garden. To stave off (or maybe even cause) frustration and boredom I am dedicating my time to cataloguing the life cycle of the many un-identified fungi in the garden. Each day I take photographs of all the mushrooms, this is essential as their appearance changes dramatically from day to day and many of the reference books have just one photograph from which to work. I have set a very low learning target and will be happy if I manage to be confident about three or four specimens this year. I am using the Roger Phillips guide but find some of the websites such as First Nature are particularly useful. 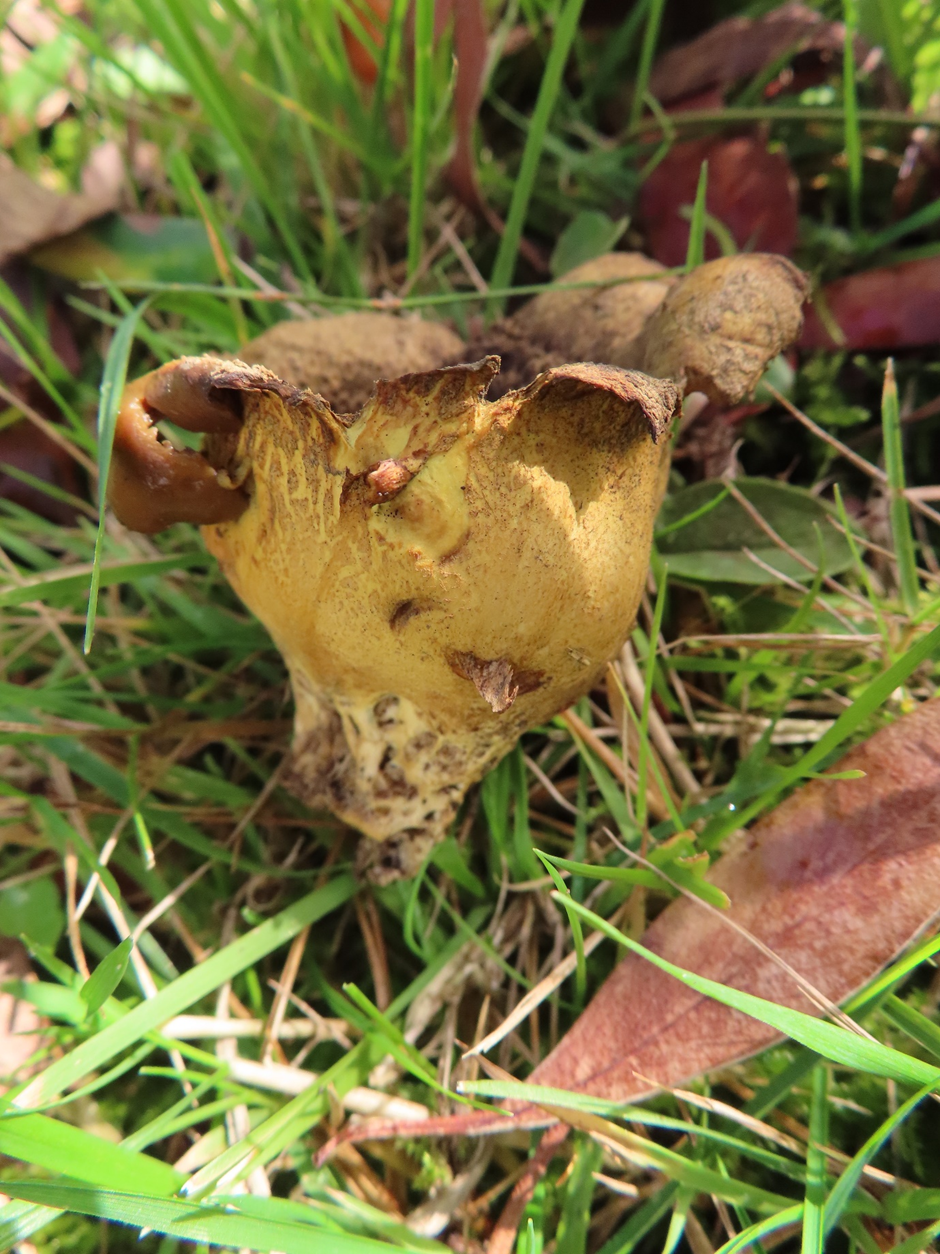 This earthball is a perfect example of the problems I face when I do my research. I would describe this specimen as yellow or mustard, but as I only found it when it had split open and was obviously well into its life cycle, I don’t know what it looked like originally. I guessed that it is was common earthball but most of the reference books or websites have photographs of young brown specimens only. Wild Food UK has a very helpful website which offers up to fifteen photographs of each mushroom in various stages of maturity and had a perfect match for the specimens above. So, I am sticking with common earthball for the moment. 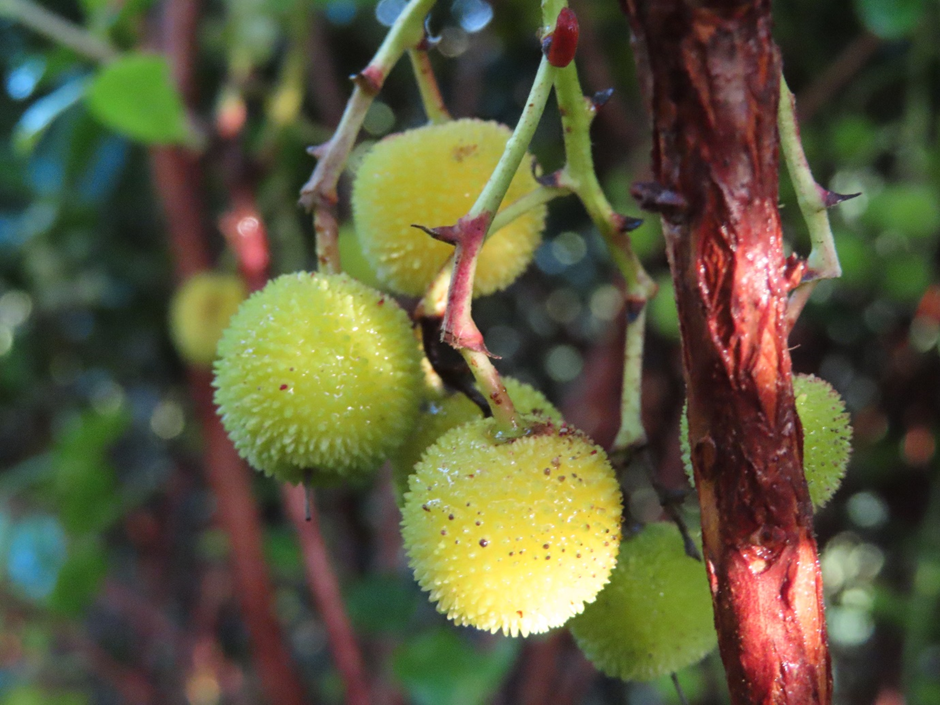 My Arbutus tree is usually covered in flowers but this is the first year that it has produced fruit. I presume that it is too late for them to ripen. As the tree was almost totally wrenched out of the ground a few years ago and is now growing sideways and flourishing I have no complaints. 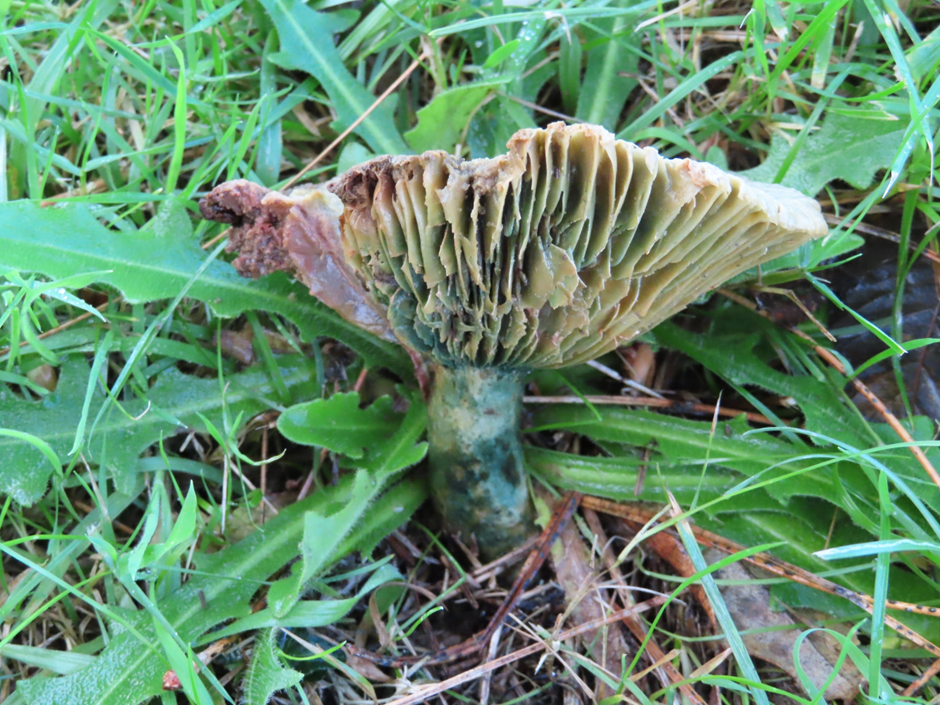 This was my first success in my attempts to identify my own mushrooms. When I first photographed this, it could have come straight from Phillips section on Woolly Milkcaps. However, as I captured its life cycle from day to day it changed in form dramatically and developed a greenish tinge. I can now say with confidence (I think) that it is a Saffron Milkcap (Lactarius deliciosus) as it is growing under pine trees rather that a false Saffron Milkcap probably exclusive to spruce. My reluctance to disturb these specimens to help with identification has been rewarded. Last year there was just one mushroom. This year there are twelve in the same area. 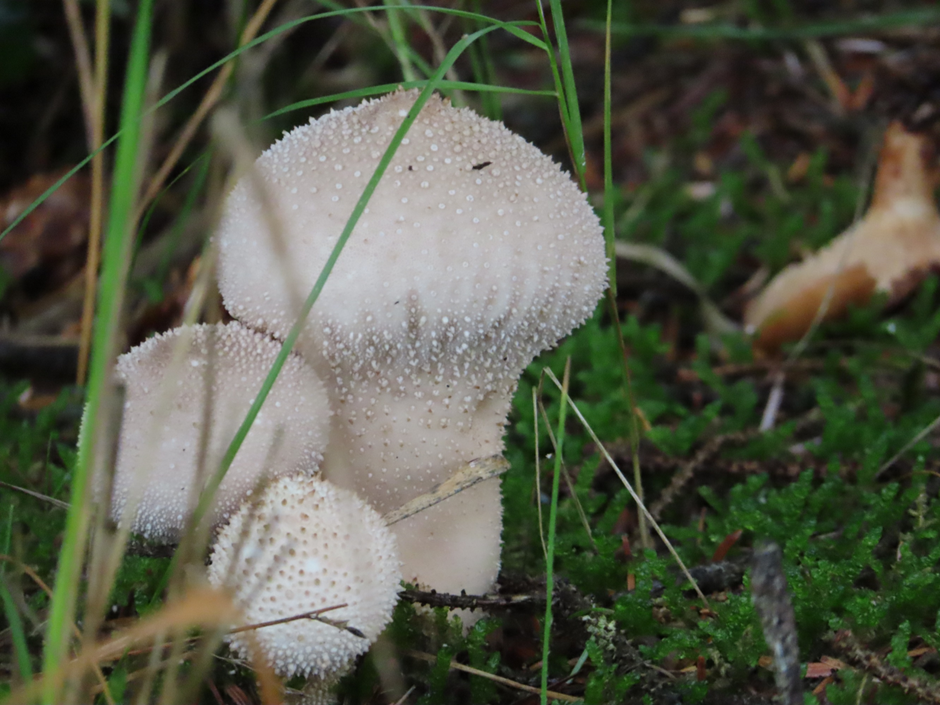 A trip to the recycling centre can be a sociable occasion in summer. On a windy autumn day everyone hurries about their business with heads down, eager to finish the job quickly. Recently was no exception and it was sheer luck that I noticed that the verges and the wood at the entrance to the centre were positively awash with mushrooms. Some were text book examples of species that I do not have in my garden and I studied them with delight until I was locked out at closing time. 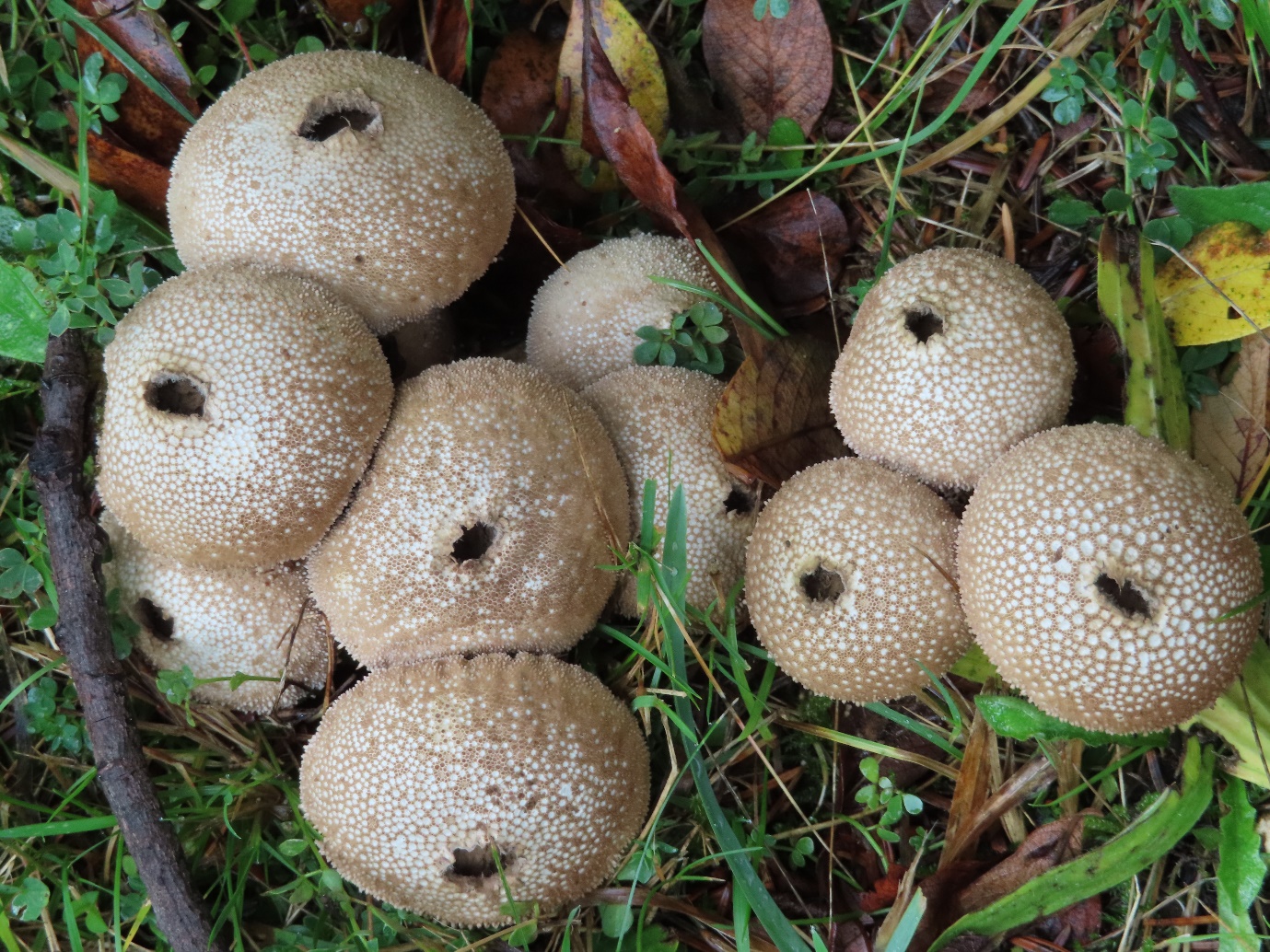 I had never seen a common puffball before so to find hundreds together at all stages of development was like finding treasure. 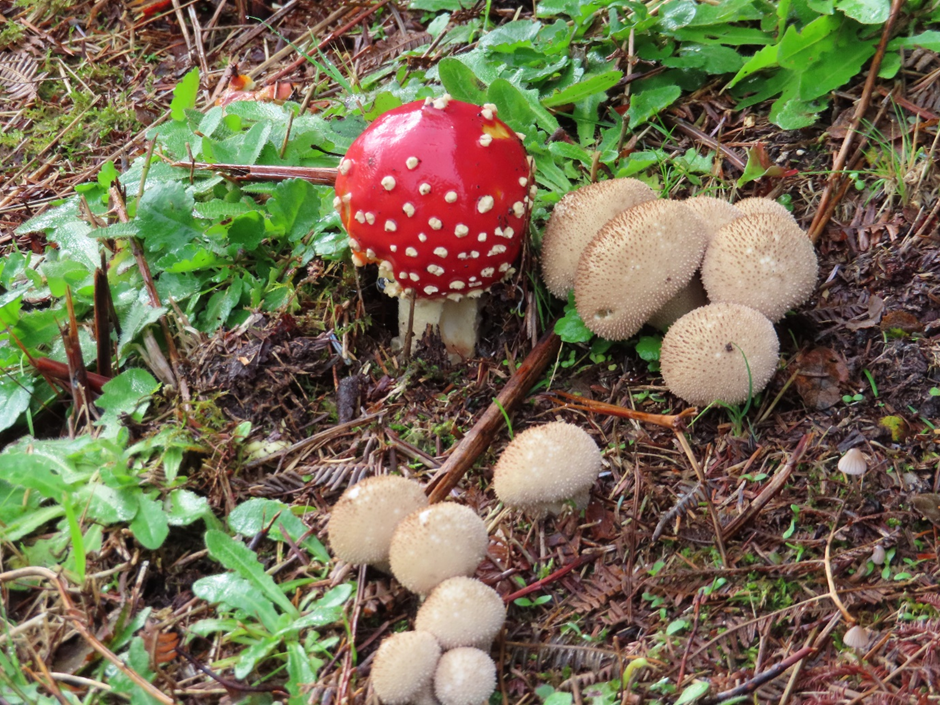 This was my first sight of the Fly Agaric, so called apparently because it was crumbled into milk to poison house flies. As it is also highly poisonous to humans this seems like a particularly dangerous practice. Again, there were specimens of all ages and they made a very bright display on a miserable day. I wonder if there is any significance that so many mushrooms were growing by the recycling centre. Other examples included a fairy ring mushroom and Saffron Milkcaps. 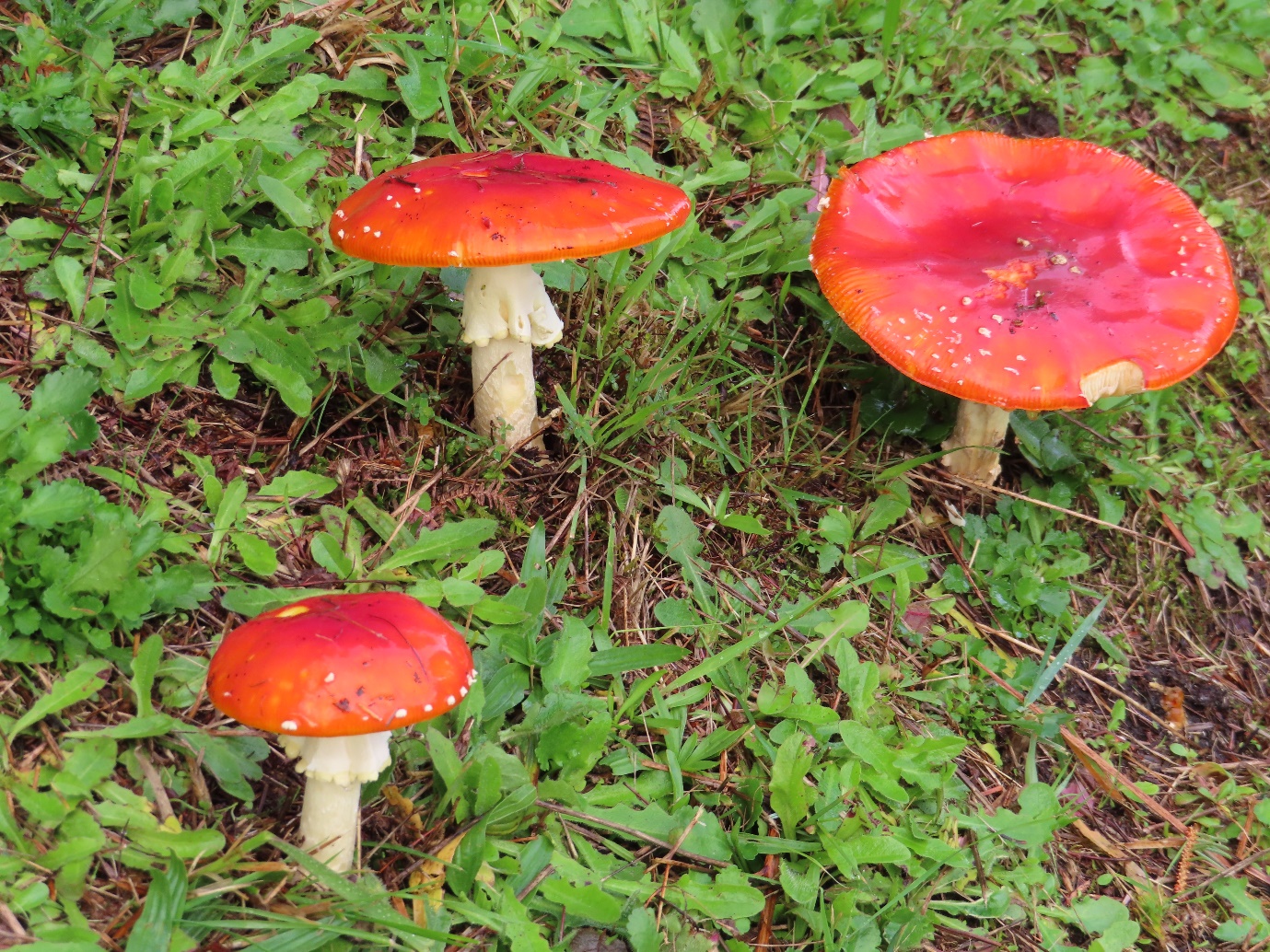 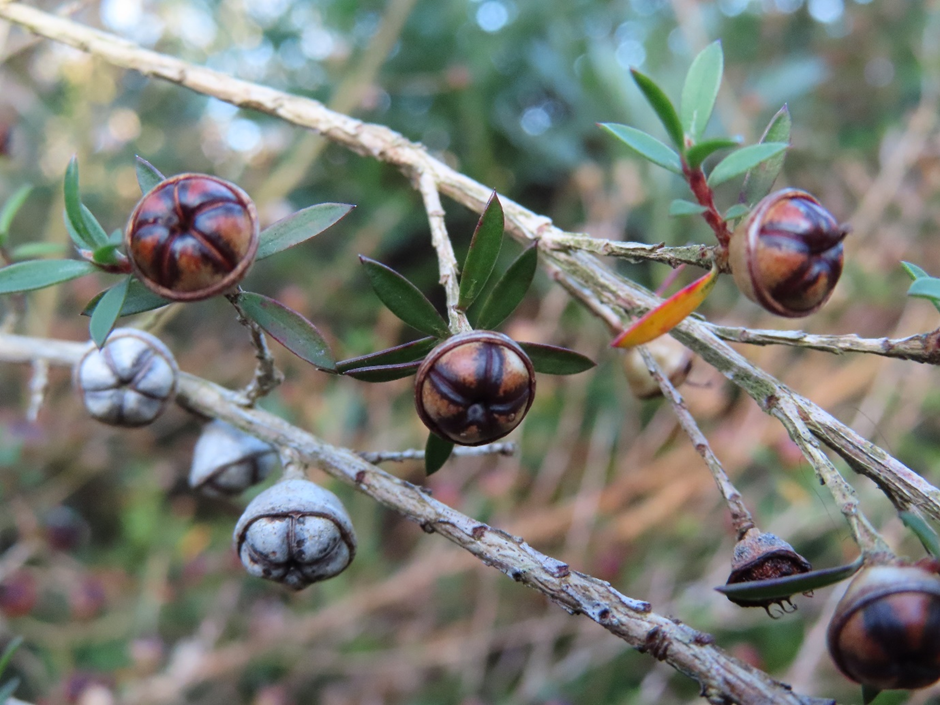 In general, Australian and New Zealand plants do very well here although they often become muddled about the seasons and flower twice a year. This Leptospermum often flowers just before Christmas as well as in May. I think that the seed heads are very attractive in their own right and will see if I can do them justice in a ‘floral’ decoration. 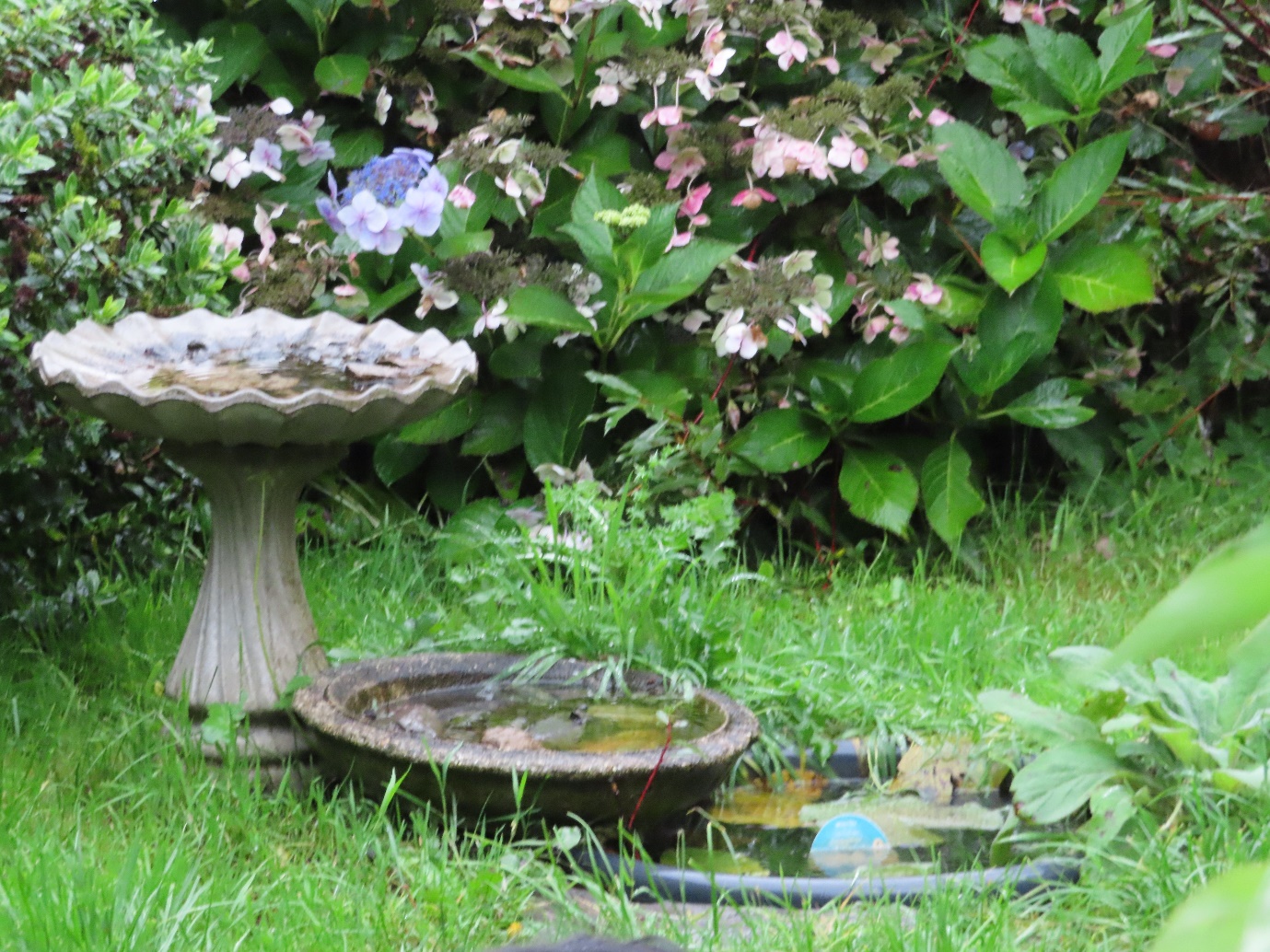 This summer was not the time to think of creating a pond when water conservation was at the foremost of my mind. As a temporary measure I have decided to try and hide the large plastic bucket that I am using for the one cramped water lily. The birds seem very happy with the arrangement as the surrounding shrubbery allows them to dash for cover as soon as they hear the dogs. The nearby gravel also alerts them to my presence so I am not sure if I will ever get a photograph of them bathing. 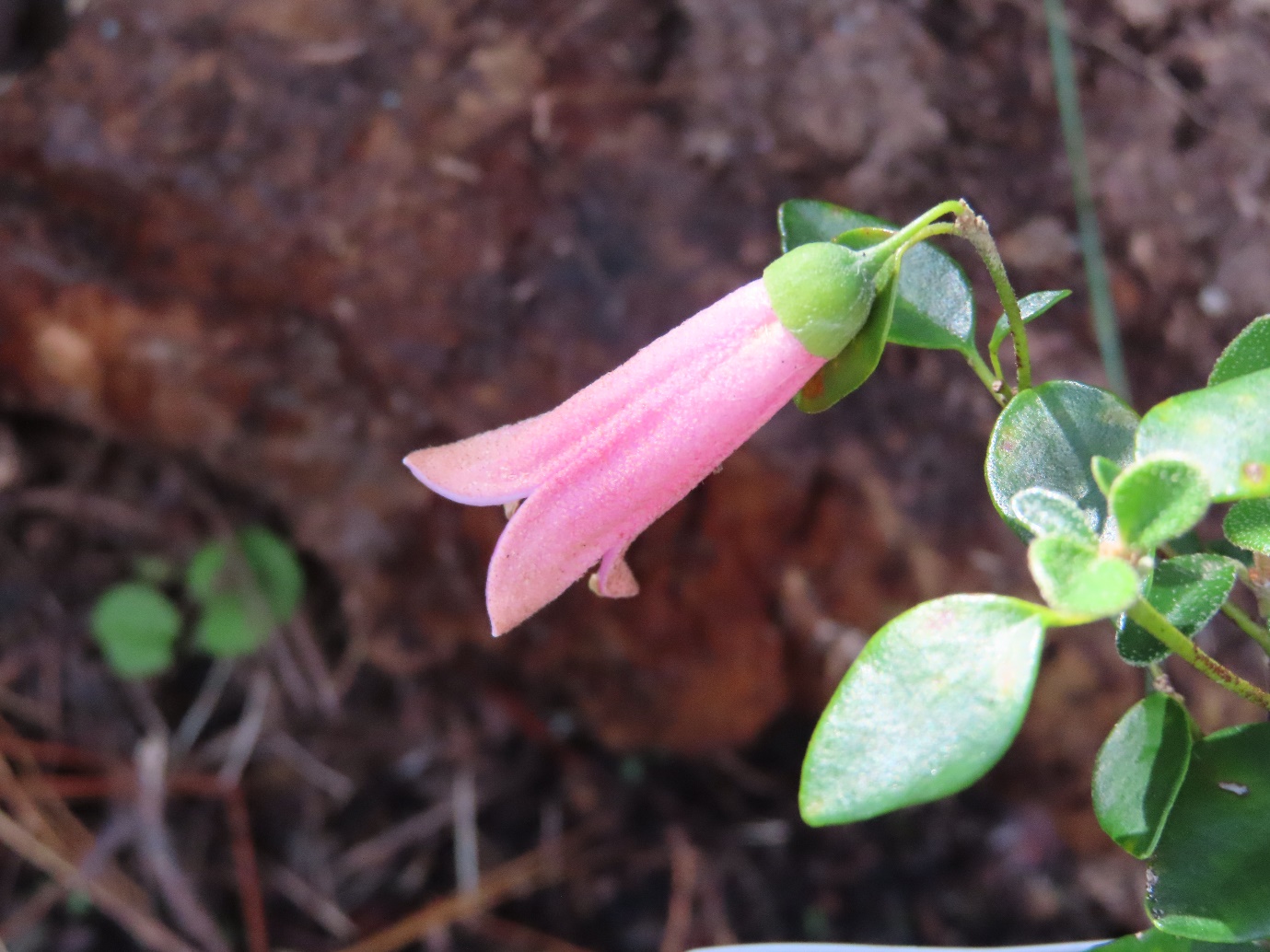 My third Correa which has recently joined the other two under the pine trees . The flowers are rather delicate but if they last as long as their compatriots throughout the winter, I will be content.