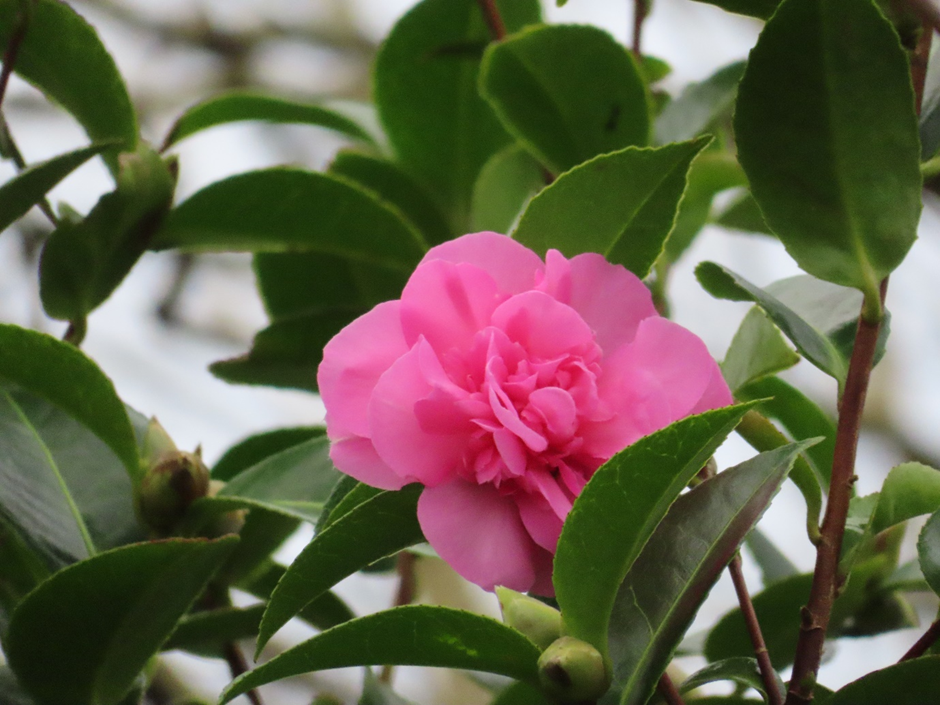 I always think that it is a minor miracle that I can find enough flowers in the garden to decorate the house for Christmas. I divide the sources into three categories – those shrubs that usually flower during the winter such as Camellia, Correa and Viburnum, those summer plants that keep producing one or two flowers regardless of the month or climate and those shrubs that start to flower over Christmas despite the fact that they would not usually appear until May or June. The Camellia above is just one in the first category to start flowering in the copse. Judging by the buds there will be a dramatic show over the next few months. 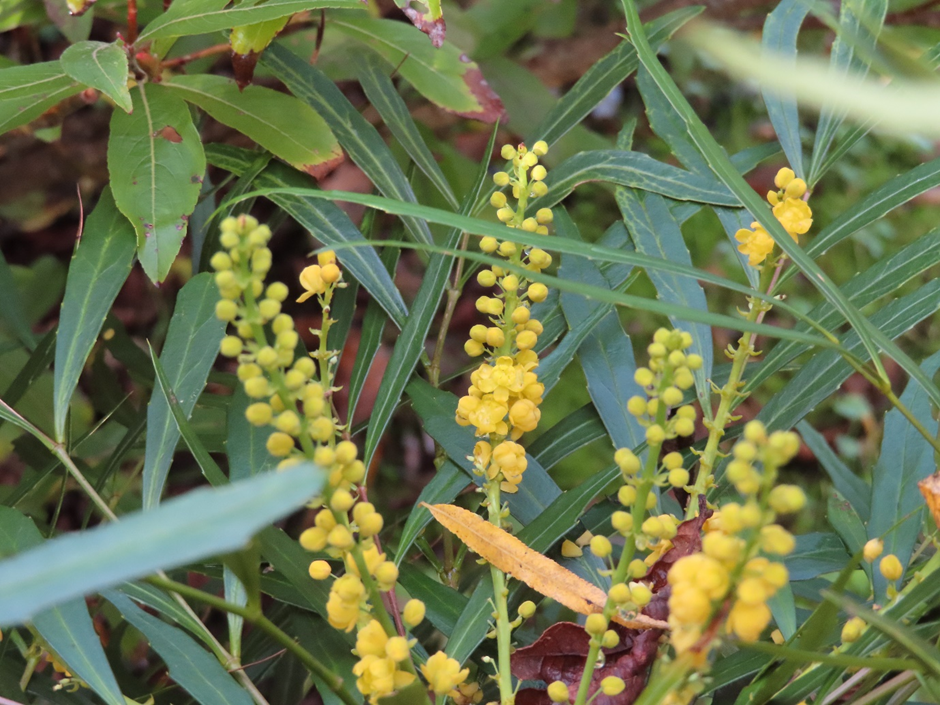 This Mahonia is also flowering on cue although I almost missed it as it is partly hidden by other shrubs. It is doing well in the shady, damp spot and is a cheerful sight in December. 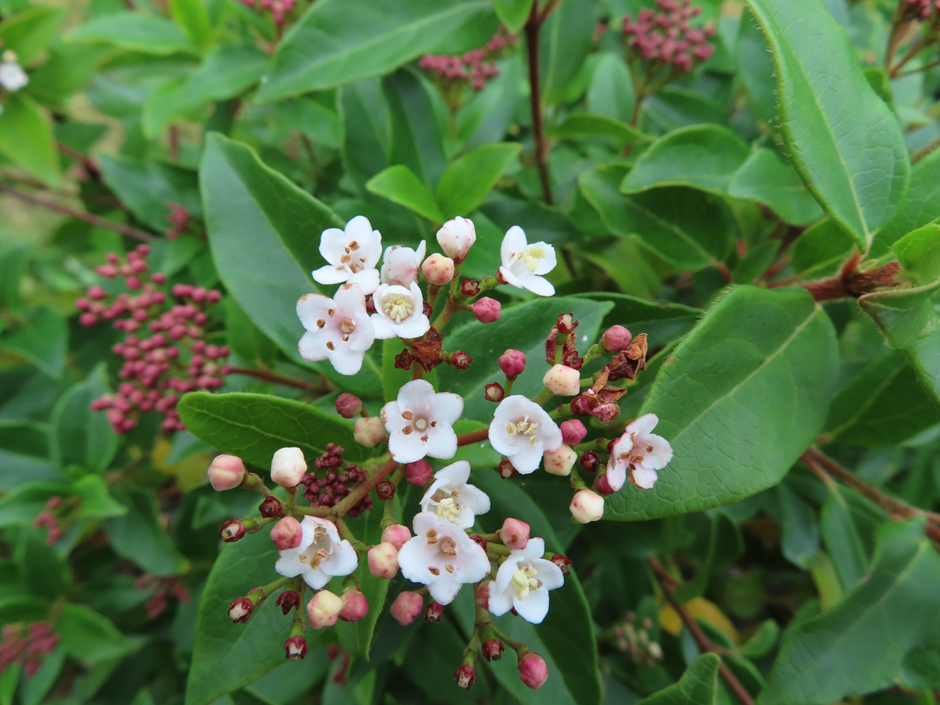 I have planted a row of Viburnum Eva Price on the path from the house to the garage and it is full of flowers at the moment. It is prone to ‘die back’ which I monitor assiduously. I lose a few branches each year but other viburnum varieties are more robust and also do well in the garden. I will keep trying with this evergreen variety though as I think that the flowers and buds are particularly beautiful. 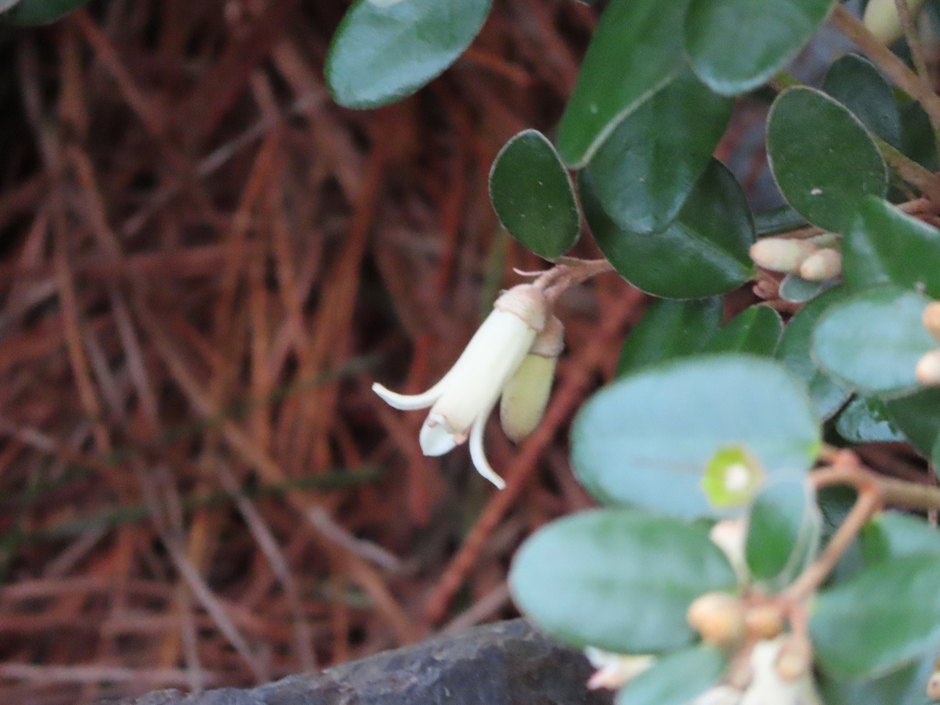 Correa Backhouseana is one of the three Correa from South Australia that flower in winter and seem to do very well in the garden here. The flowers are small and dainty and do not have the impact of camellia but this is an essential plant given its tolerance of salt and storms and its endless production of flowers over many months. 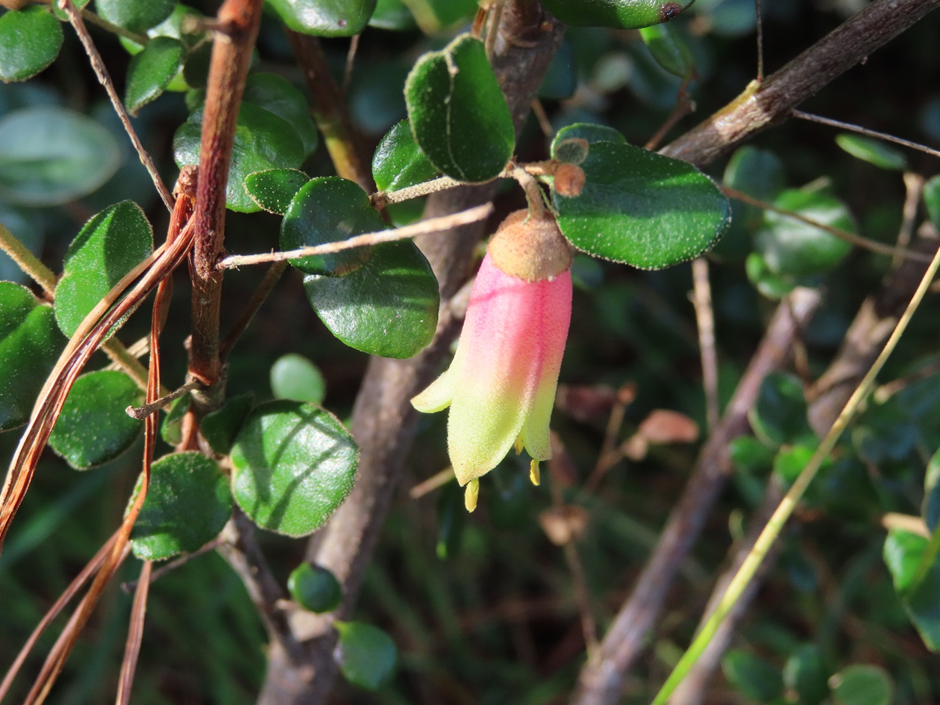 I just planted this Correa Marion’s Marvel in the autumn and it is settling in well. It is producing long lasting flowers on a regular basis and looks to be as successful as its relative. 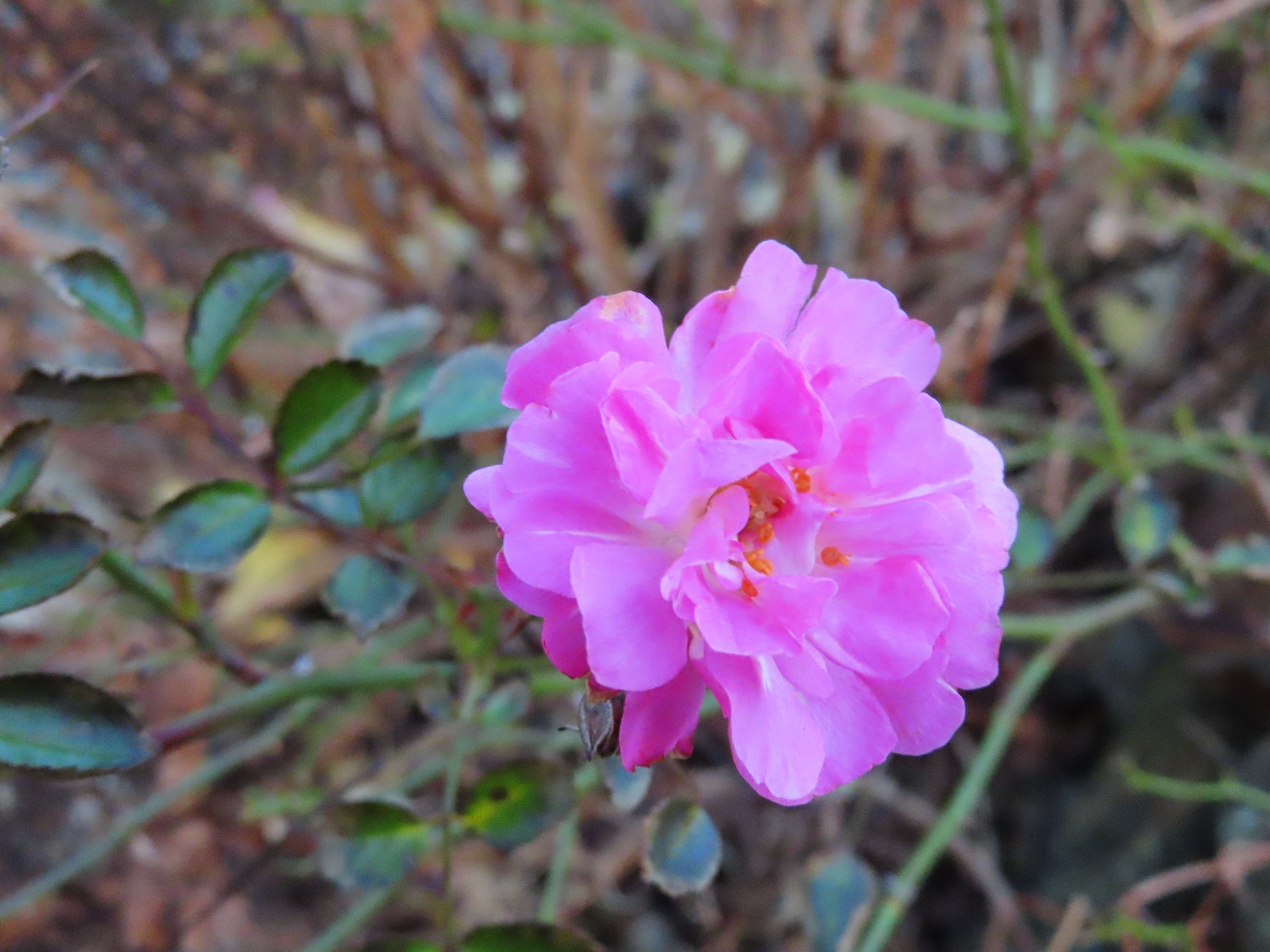 This rambling rose blossom comes from a plant that flowers throughout most of the summer. It has been in bloom for the last few weeks and survived storm Barra. It even has a few companions. I decided not to pick this for the house as I felt that it would last longer out of doors. Given the weather and the time of the year it really should not be flowering at all. 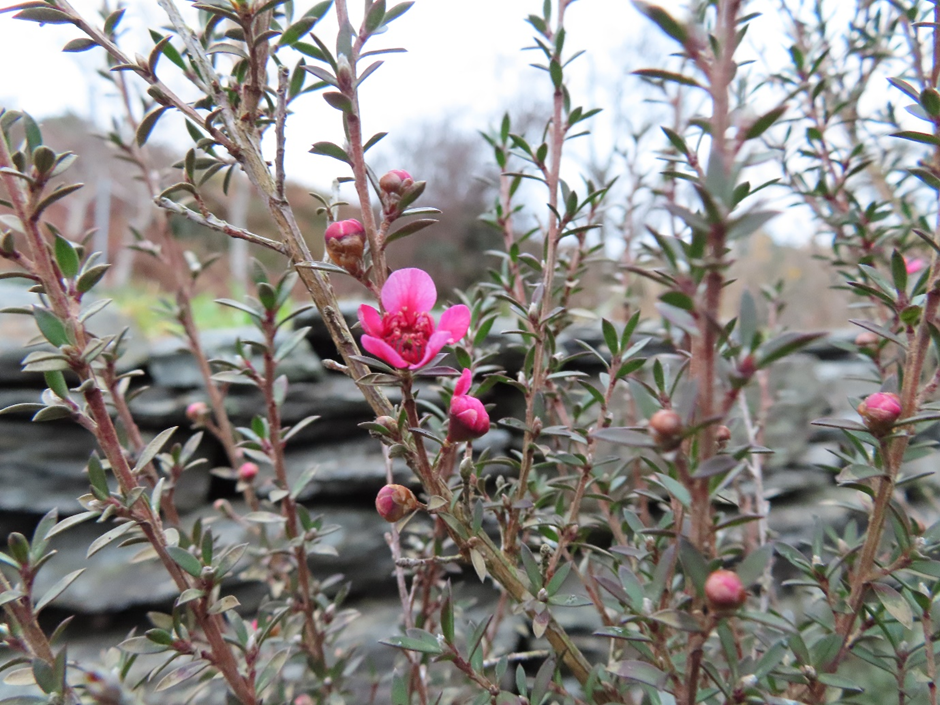 On the other hand, the New Zealand Leptospermum or tea tree plant has produced some very early blossoms for Christmas. This is one of the more delicate shrubs in the garden and is vulnerable to frost. I have lost a few plants over the years and I replace them immediately as they are a favourite of mine. The seed heads are also both attractive and unusual and make an interesting display in the absence of flowers. 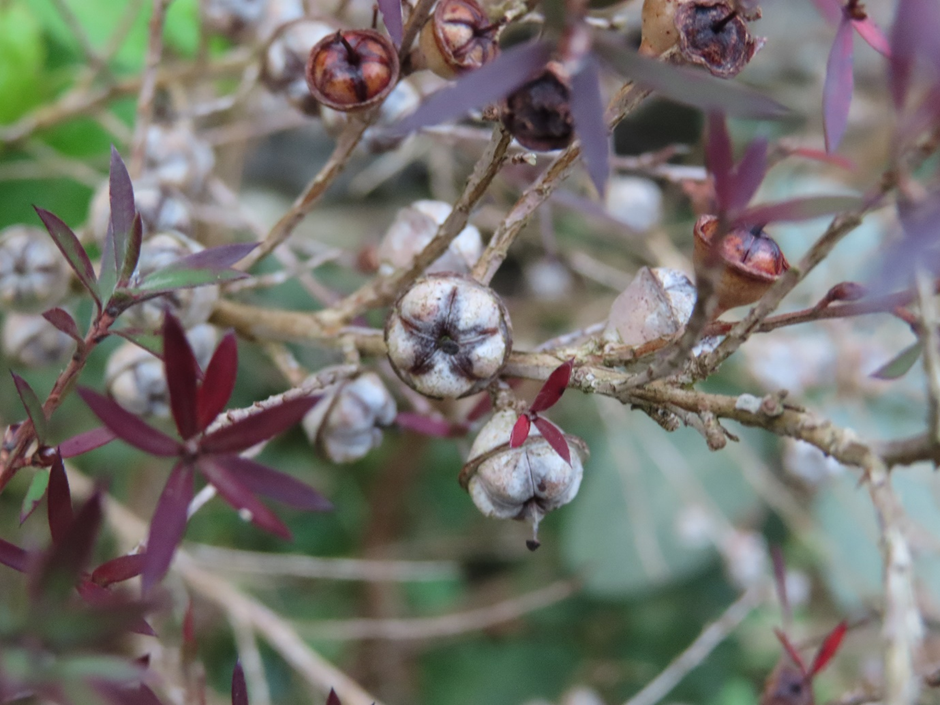 The seed heads of the Leptospermum. 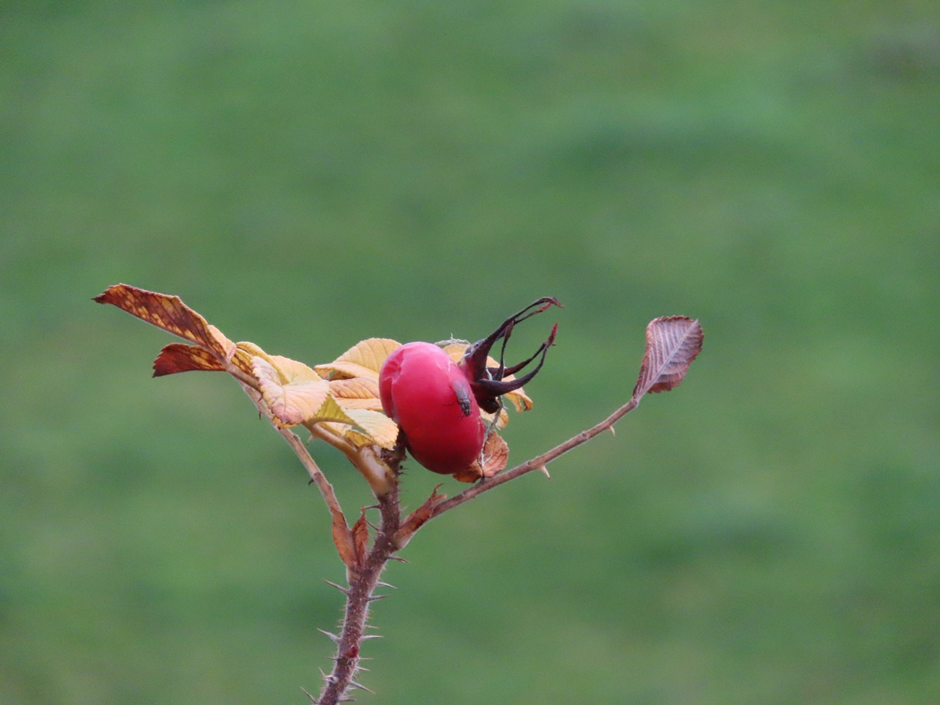 I continue to find the odd rosehip that appears to have escaped both the weather and the birds. This amazing example grows high above the rest of the plant and so is as exposed as it is possible to be. One of the many wonders of gardening. 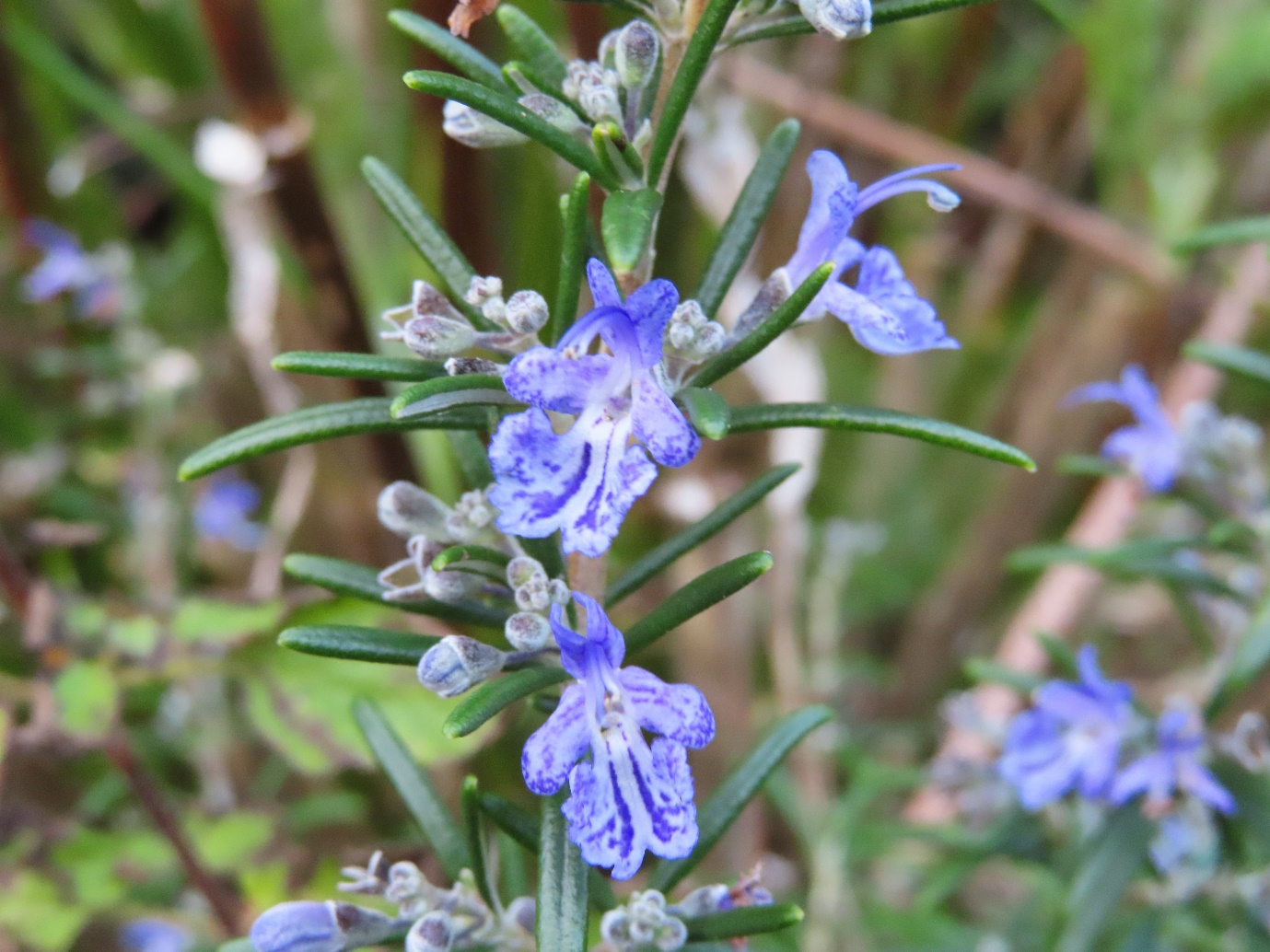 Rosemary seems to flower throughout the year in this garden and Christmas is no exception. This variety is Fota Blue and it is impervious to salt and wind. It rambles in comparison to its more common relative. It also produces blooms more consistently although both varieties are currently in flower. 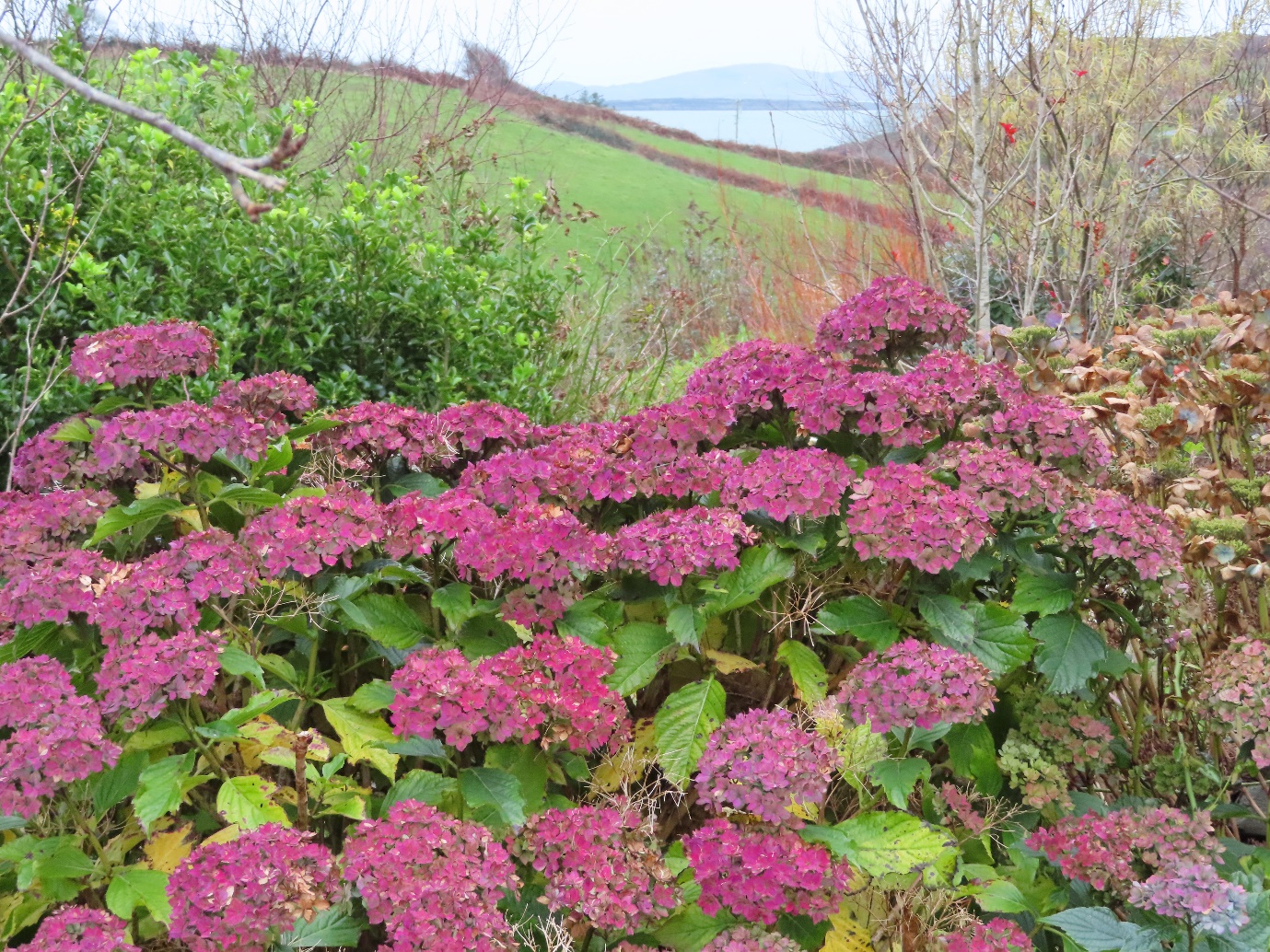 This hydrangea comes into the category of ‘no one told me that is is winter’. Its flowers are almost untouched by the weather whilst the hydrangeas on either side are completely blasted by the winter winds. I don’t dead head the hydrangeas until much later so they could hardly be called pretty at the moment. I am beginning to think that there is no point in trying to understand such anomalies, but just accept them for the interest and beauty they provide in an otherwise dull landscape. 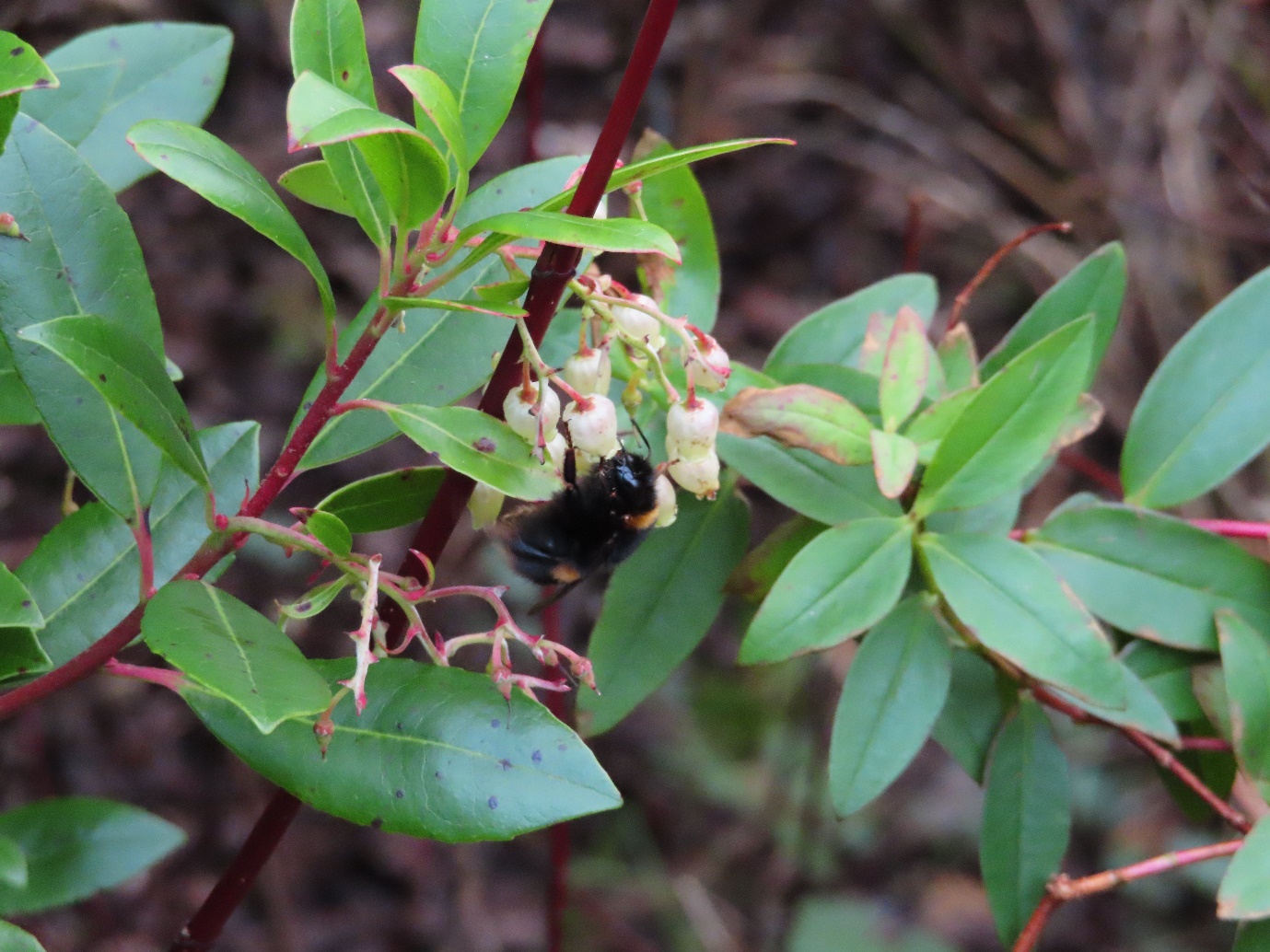 Even more unusual is this massive bumble bee feeding on the arbutus flowers. It is hard to imagine what brought him/her out as the weather has been consistently cold and damp. It was moving far too quickly for me to get a good photograph and given the weather I could not blame it. I think that it may be a Bombus Terrestris. 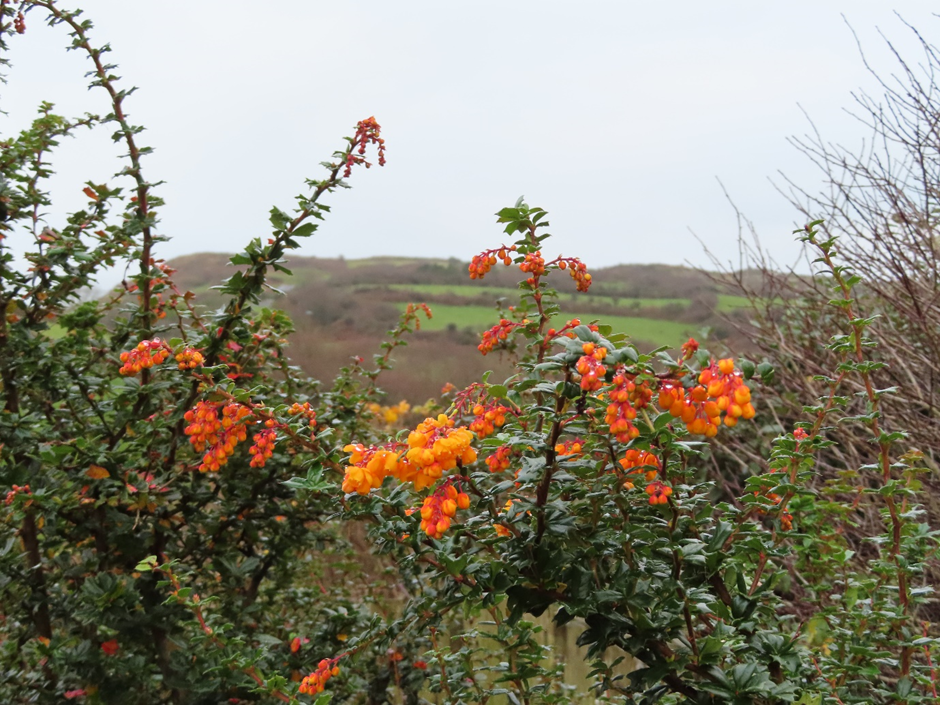 The Berberises always start to flower in December here and this year is no exception. They are a favourite with the early bees and are an essential part of my hedgerow planting. 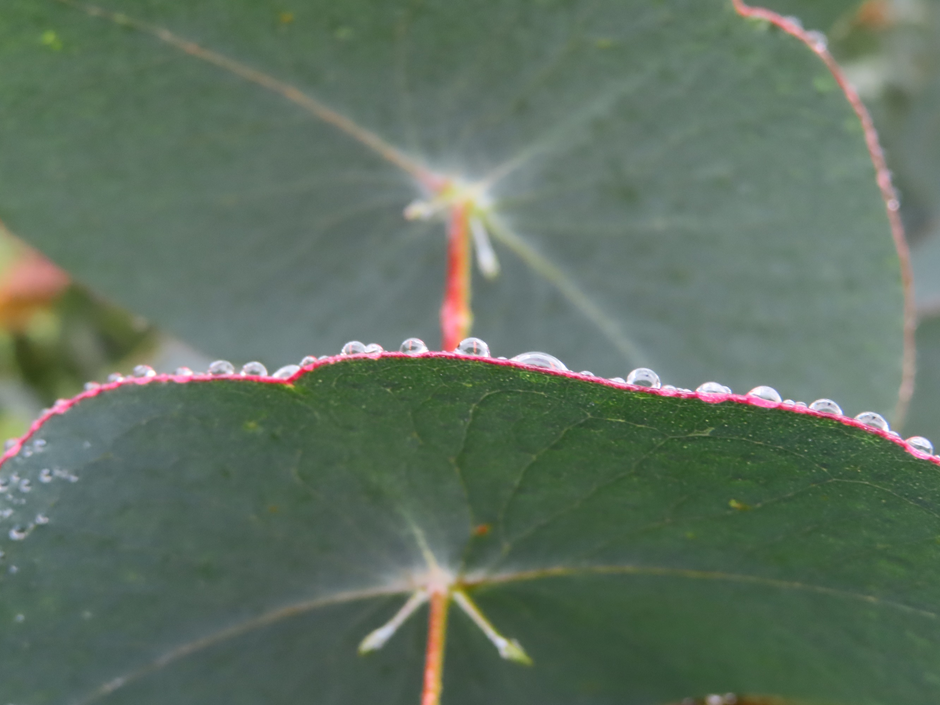 The eucalyptus always provides year-round interest whether it is its dramatic bark of the detail on its leaves. I took this on a wet day when the raindrops created a necklace around the leaves. 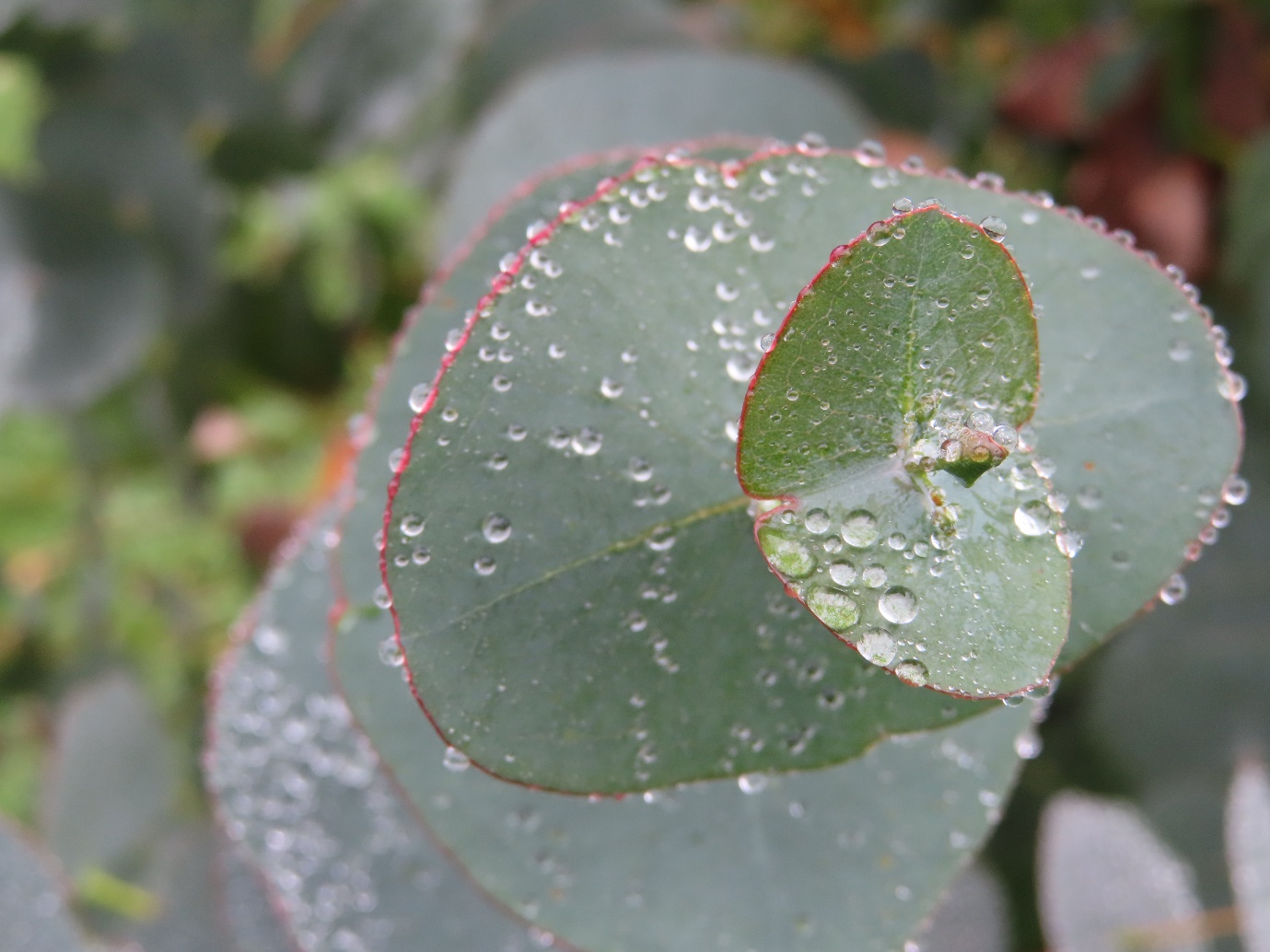 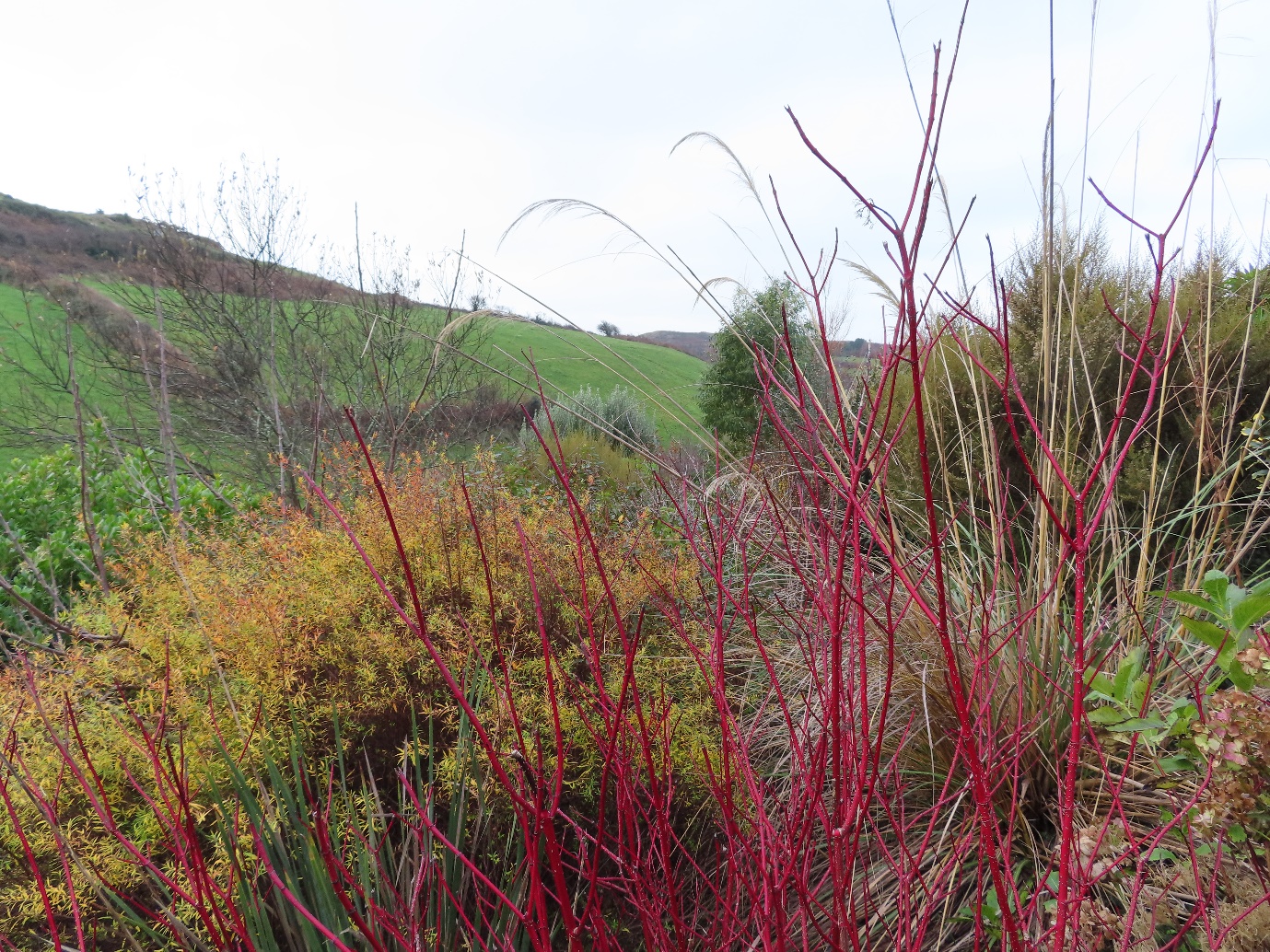 This is a part of my planting on what was once a bare hillside. I am particularly pleased with the winter colour provided by the Dogwood and Hebe. The area has become a favourite spot for the birds including blackbirds as it provides plenty of cover and protection. 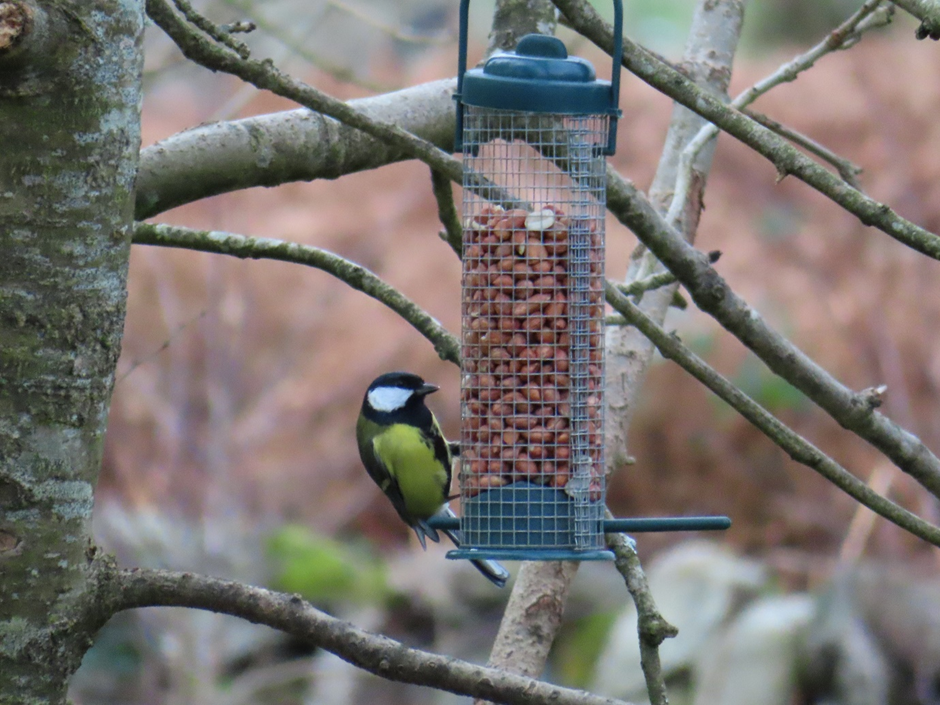 The birds continue to provide endless amounts of pleasure although finding suitable crow proof feeders is proving to be an expensive hobby. Not only did they remove the top of the one seen above but they also made a large hole in the wire mesh. Apart from the expense of replacing the container they are seriously threatening my attempts to recycle all plastic as they remove it from my sight and even from the garden. (It is probably somewhere in the neighbours’ garden but I have no idea where I would start looking.) 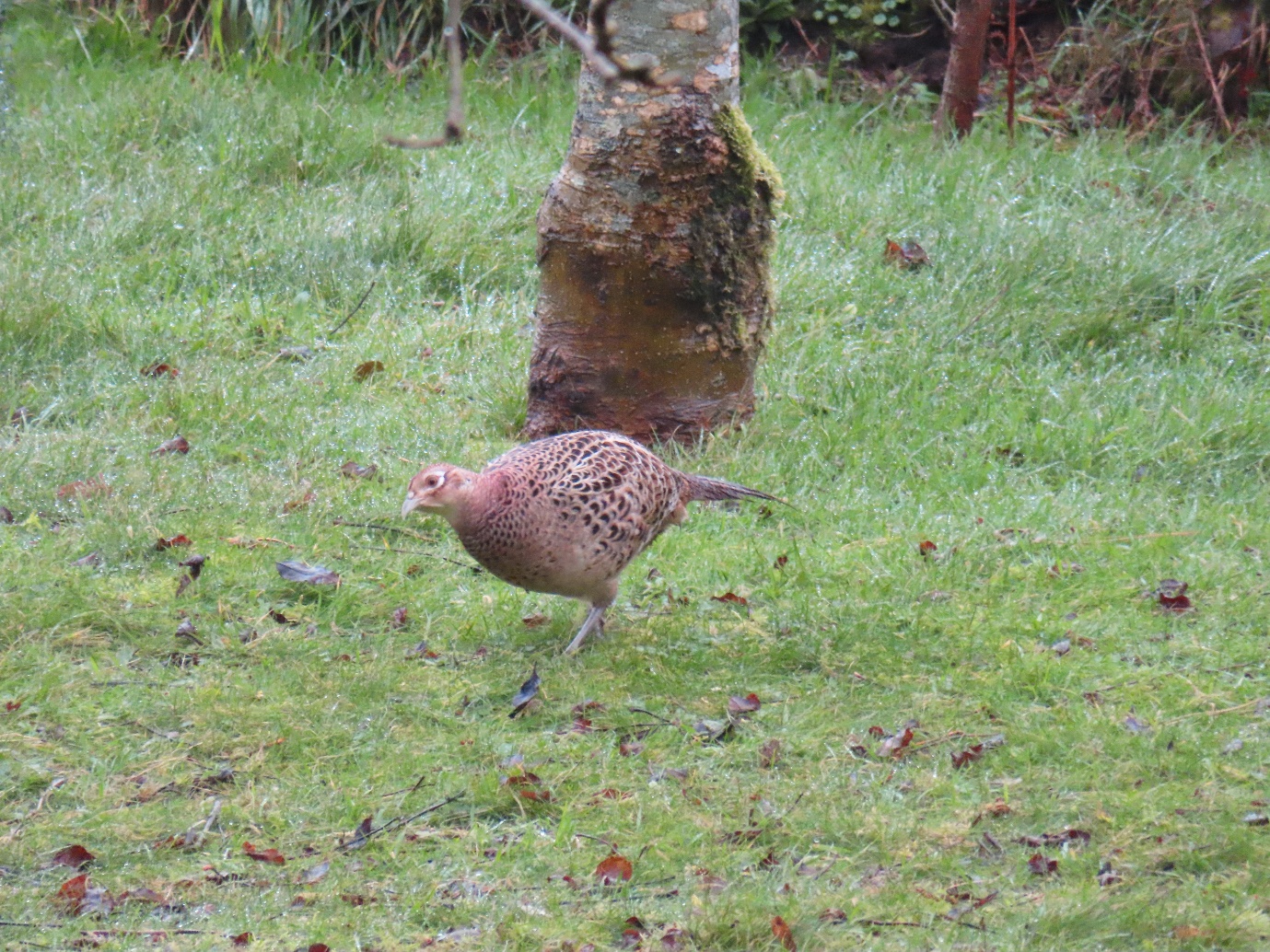 I have been researching the life cycle of pheasants in an effort to understand the group that visits the garden daily. At first, I thought the five were from the family of nine that I photographed during the summer. Now I have learned that the male is largely an absent father and that the mother and young disperse in August. The male then collects a harem of females (the article’s word not mine) in spring. So, I am not sure if this female and the male below are related or if the male is collecting his harem early . Either way I don’t fancy my chances as an ornithologist. 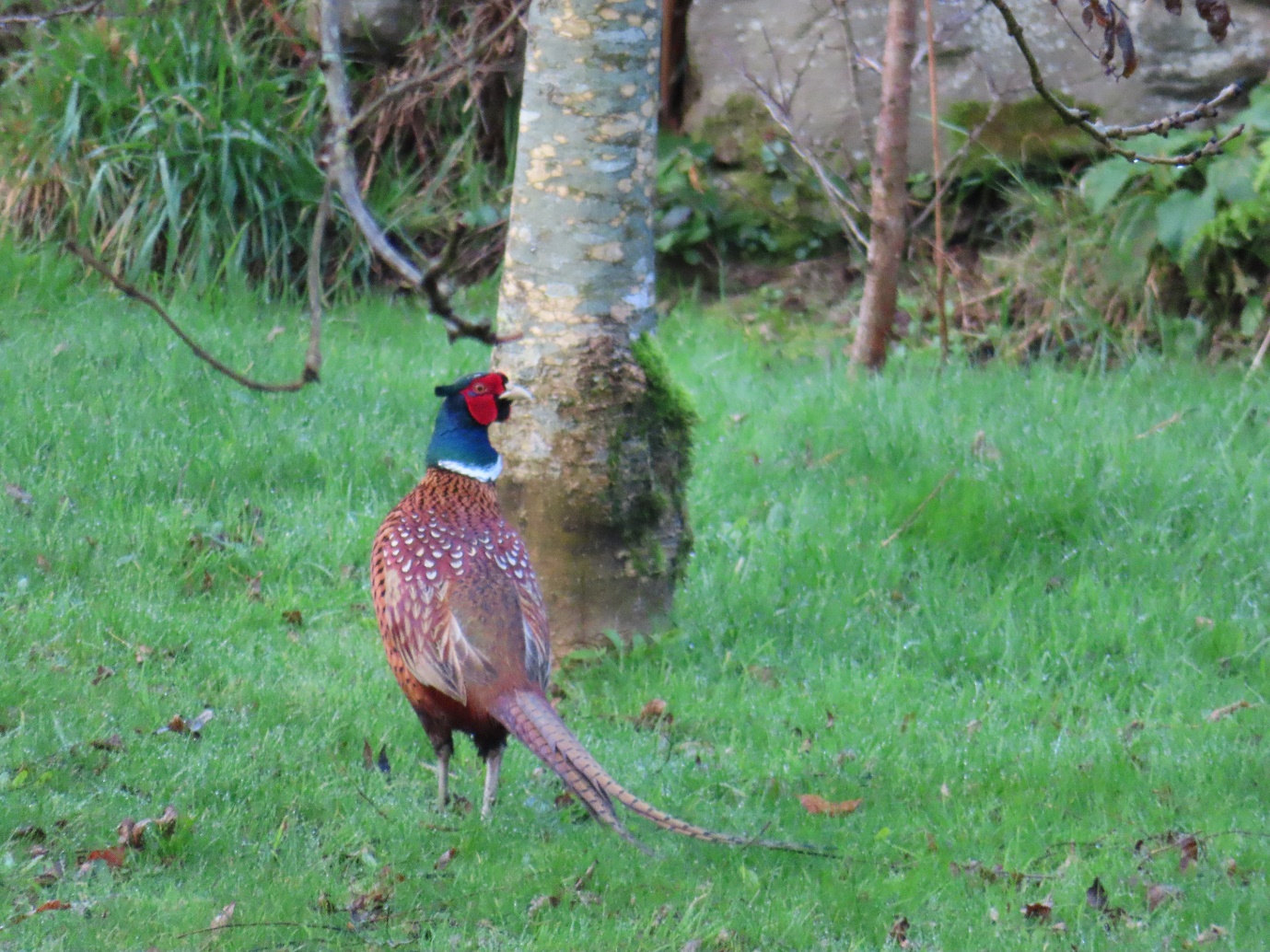