For the first year ever, I am finding it had to find work to do in the garden. This is not for lack of trying. I am thwarted by two factors. The temperature has been below zero every night for some time and daytime temperatures are little better. My hands have registered their disapproval of this and have gone on strike. The ground is as hard as a rock and unworkable without a digger. The latest Covid-19 lock-down also means that even if the ground was ready, I cannot get to my favourite nursery Future Forests to make my final selection of new trees and shrubs. The garden takes on a beauty of its own in this weather and while I cannot work it is beautiful to walk through the frost covered plants and shrubs. 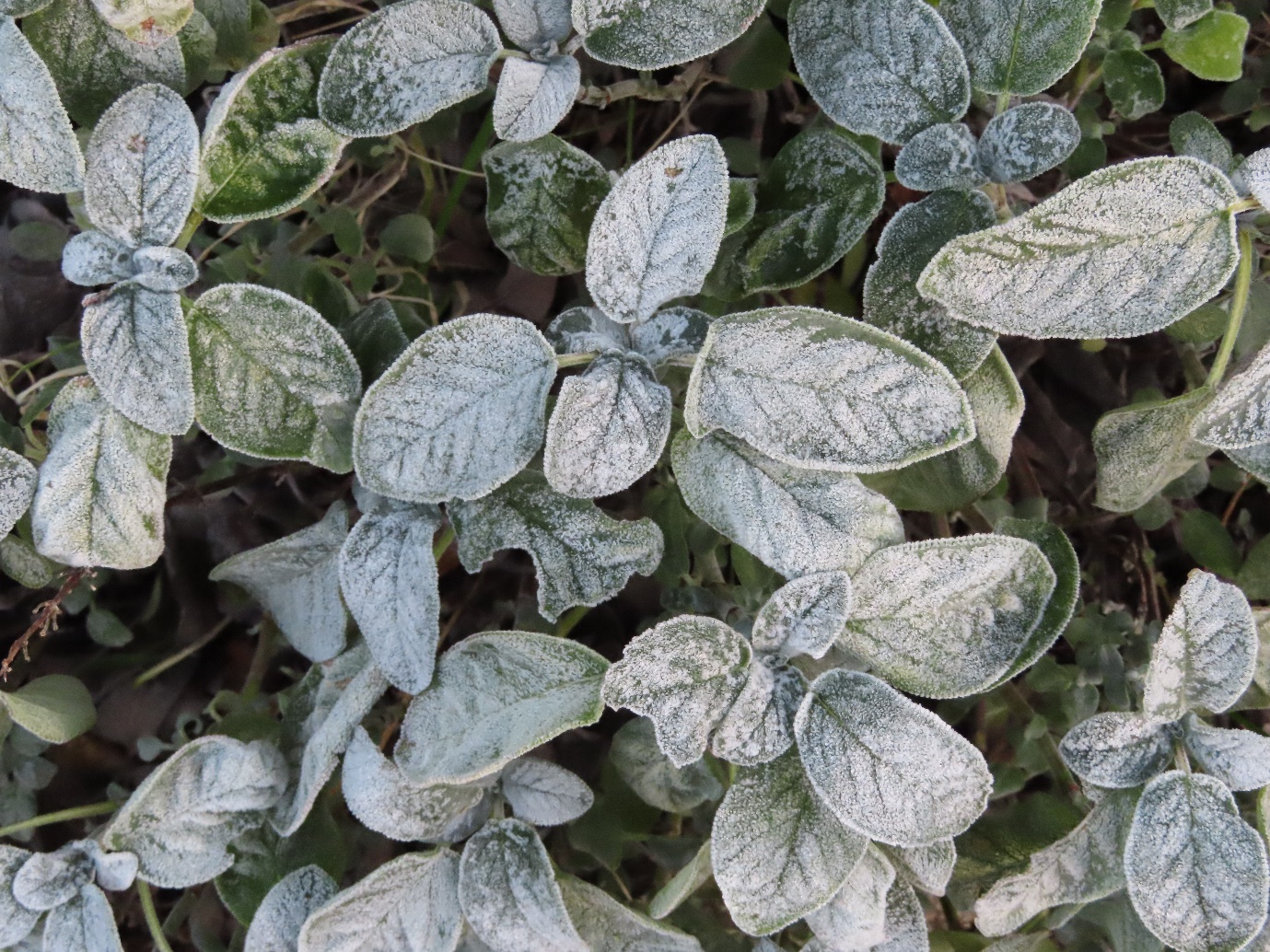 Sage on a frosty morning

I can also plan for the future in the warmth and comfort of the house. My focus is on the part of the field below the house that I hope to reclaim. I will use about one third of an acre. I have decided to try and create a miniature woodland garden with the aim of making it a haven for small birds. 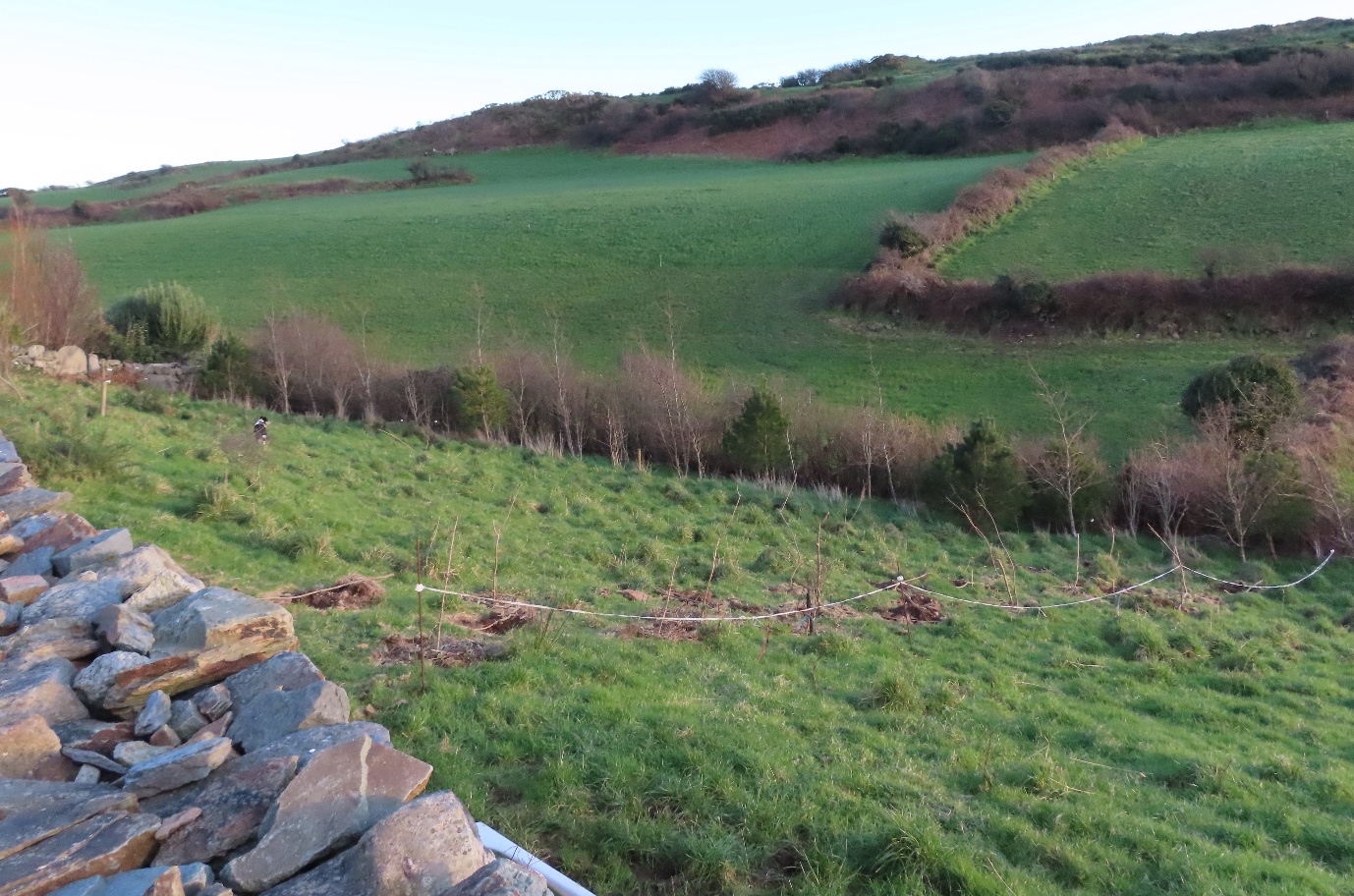 The field faces south and is rather steep. Some years ago, I planted a hedgerow and a range of trees on the bottom boundary. Two sides are protected by large dry-stone walls. The west is open to the elements and dealing with this has to be my first task. 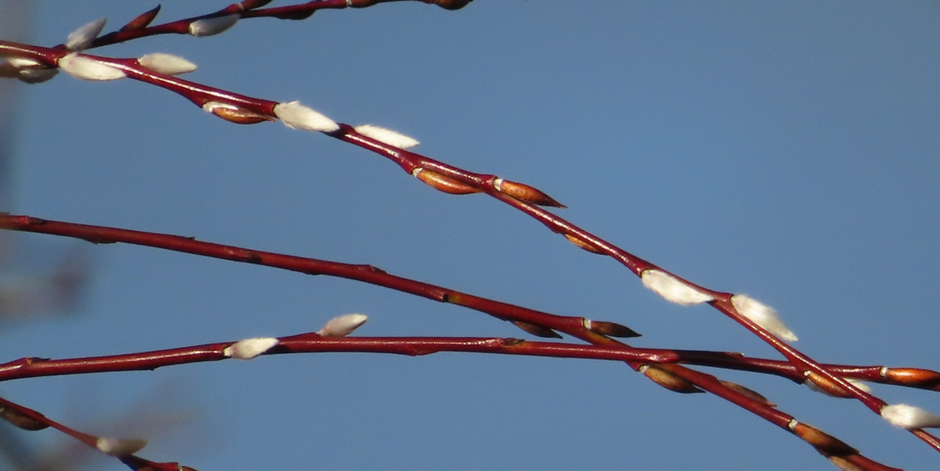 I have six or seven types of willow now growing in the garden. I divide these into the ‘bog-standard’ willows which will do well without shelter and the more ornamental which provide dramatic colour throughout the winter but may be more delicate. These will form a line of defence along the west boundary and will be interspersed with other hedgerow plants such as holly, Guilder Rose and Berberis Darwinii. As the willows can grow up to ten feet in a year it won’t be long before they provide a thick hedge with the evergreen varieties providing shelter for the birds. 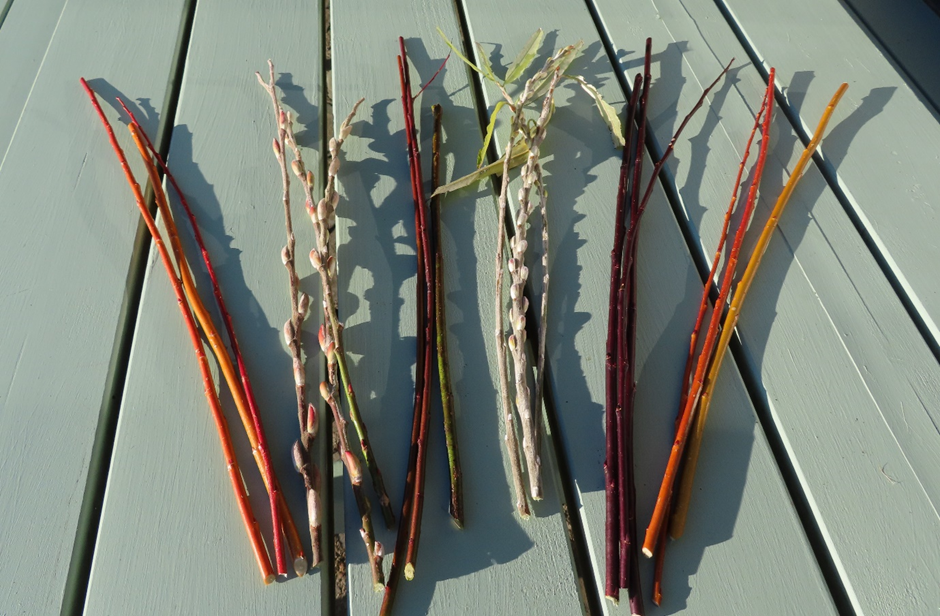 A selection of willow cuttings from the garden

Willow can be grown in a number of different ways. If you wish to use them for basketry they should be coppiced (cut back to base) every year. If allowed to grow they should ideally consist of straight tall stems. These are the two methods that I shall use. Some of the more colourful stems lose their colour as they get older and I would like to have clusters of the young orange and purple stems in the fourth row of plants for their colour in winter. They also root very easily. I placed the cuttings (see photograph) in water and most are already producing small roots.

This year I will also plant the Monterey Cypress I have chosen for the centre of the area and a monkey puzzle tree as an experiment. I will plant the remainder of the trees next year when the willows are providing some shelter. I have decided to intersperse the trees with small shrubberies of plants that will provide the birds with food. As well as Rosa Rugosa I will experiment with fruit bushes, as I rather naively believe that this might deter the blackbirds from stealing from the fruit garden. 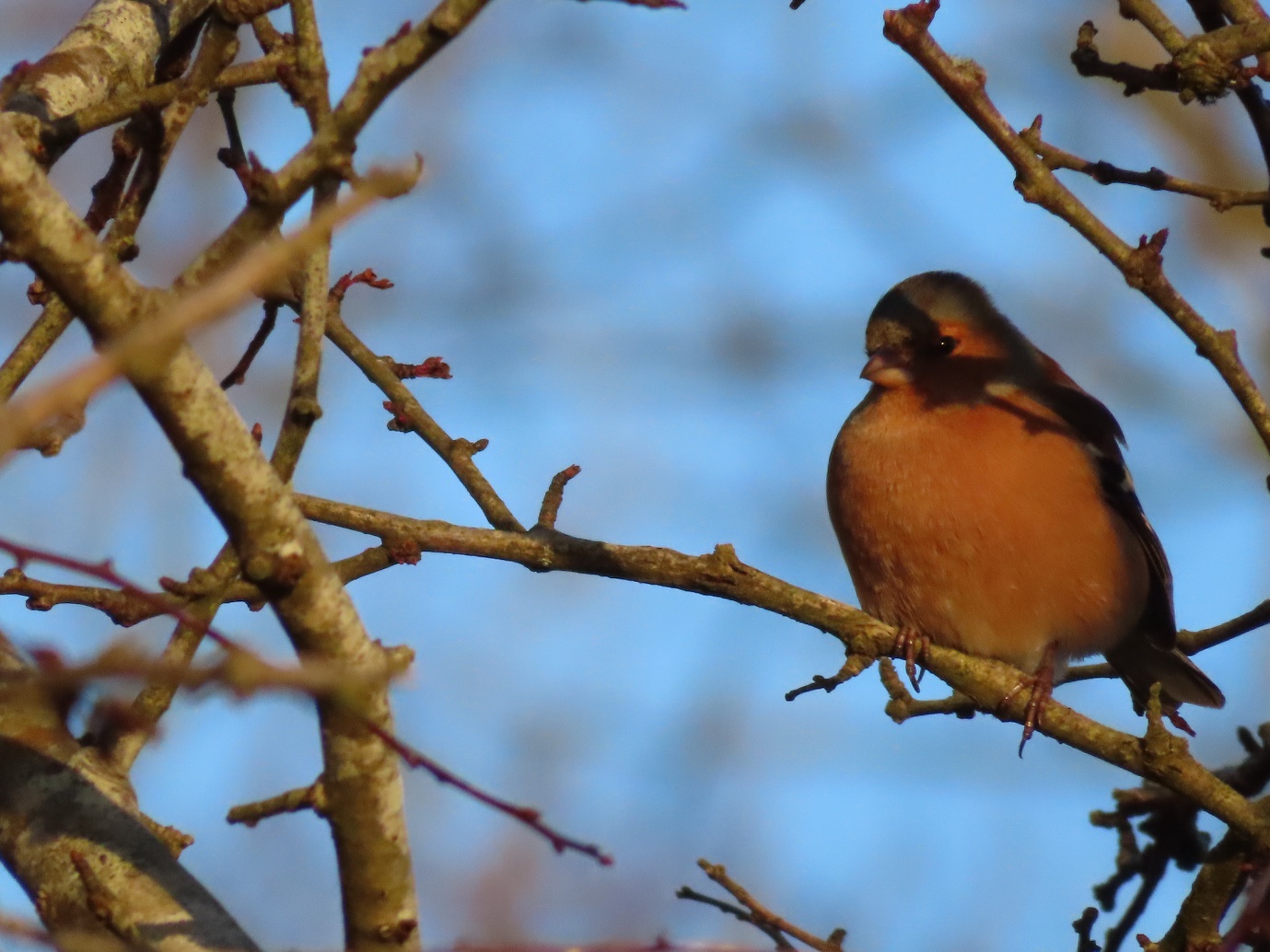 I am using some of the free time afforded by Covid-19 and the weather to spend more time with the birds. An amazing number of small birds are visiting my bird feeders and tables each day. Blue Tits, Great Tits, Coal Tits, Green Finches, Chaffinches, Pheasants and of course Robins. These are the bravest of the lot but during the cold weather a blue tit and a coal tit were daring enough to approach the bird table as I filled it each morning joining the cheeky robins. Most of the small birds have got used to my appearances at the bird tables and remain close as I fill them up with food. On one of the coldest mornings two blue tits were waiting for me perched on the gate into the driveway. They allowed me to watch them from just a foot away and it was a joy to be able to observe them so closely. 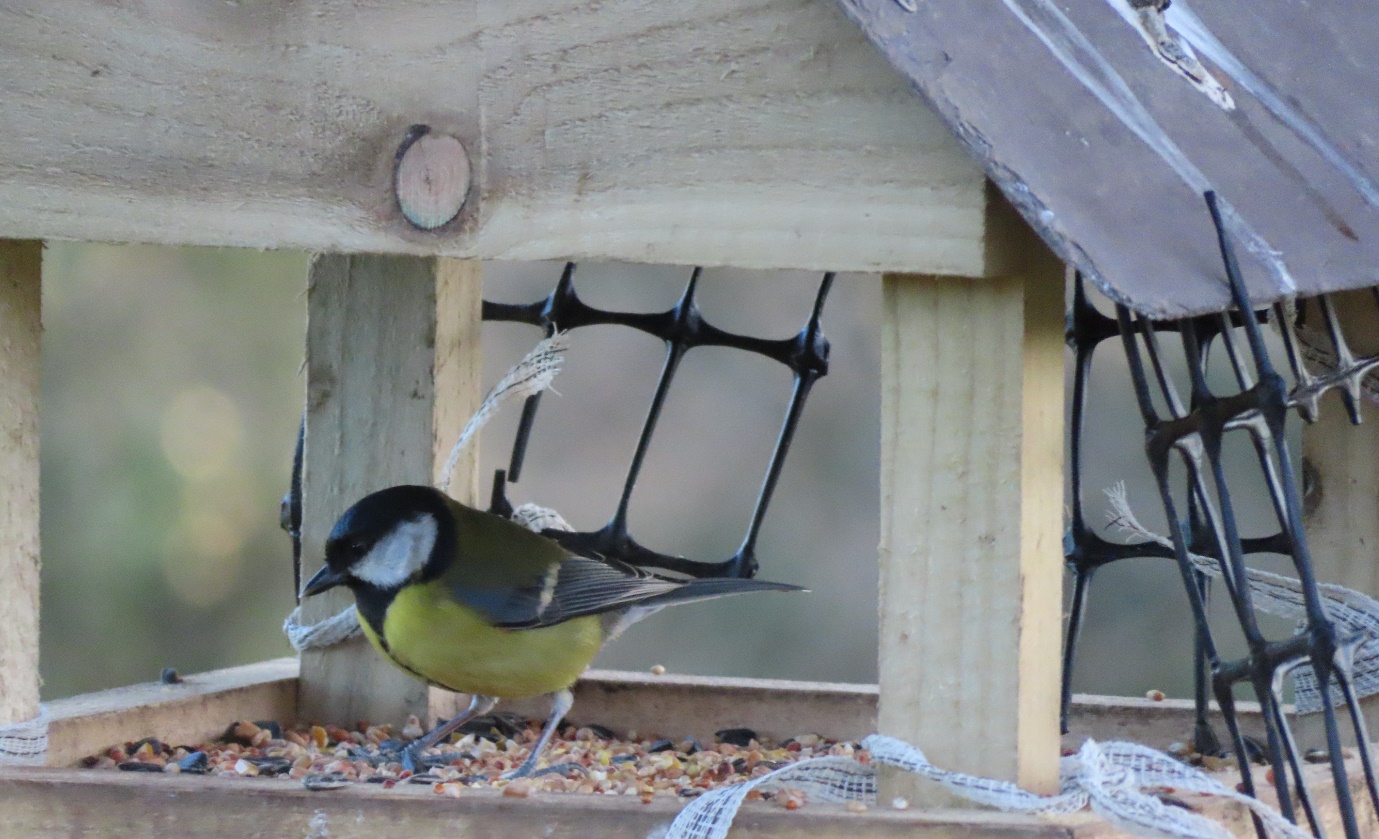 The RSPB and Birdwatch Ireland websites have good information on the best food for each bird. I followed their advice and placed mealworms under the hedges around the garden and the blackbirds have appeared from the hedgerows for the first time. I put out some Niger seeds for the green finches. I find that mealworms, peanuts and sunflower seeds or hearts are the most popular with the other birds. I have started to put out some beef fat that I have made into a paste so that it can’t be dropped around the garden thus attracting rats. On the coldest days it lasts just a few minutes. Apparently only beef fat should be used as the others are too soft and can affect the birds’ feathers and their ability to fly. By a lucky coincidence the meat scraps that I get from the butcher for my dogs produces a solid coating of beef fat once boiled down . 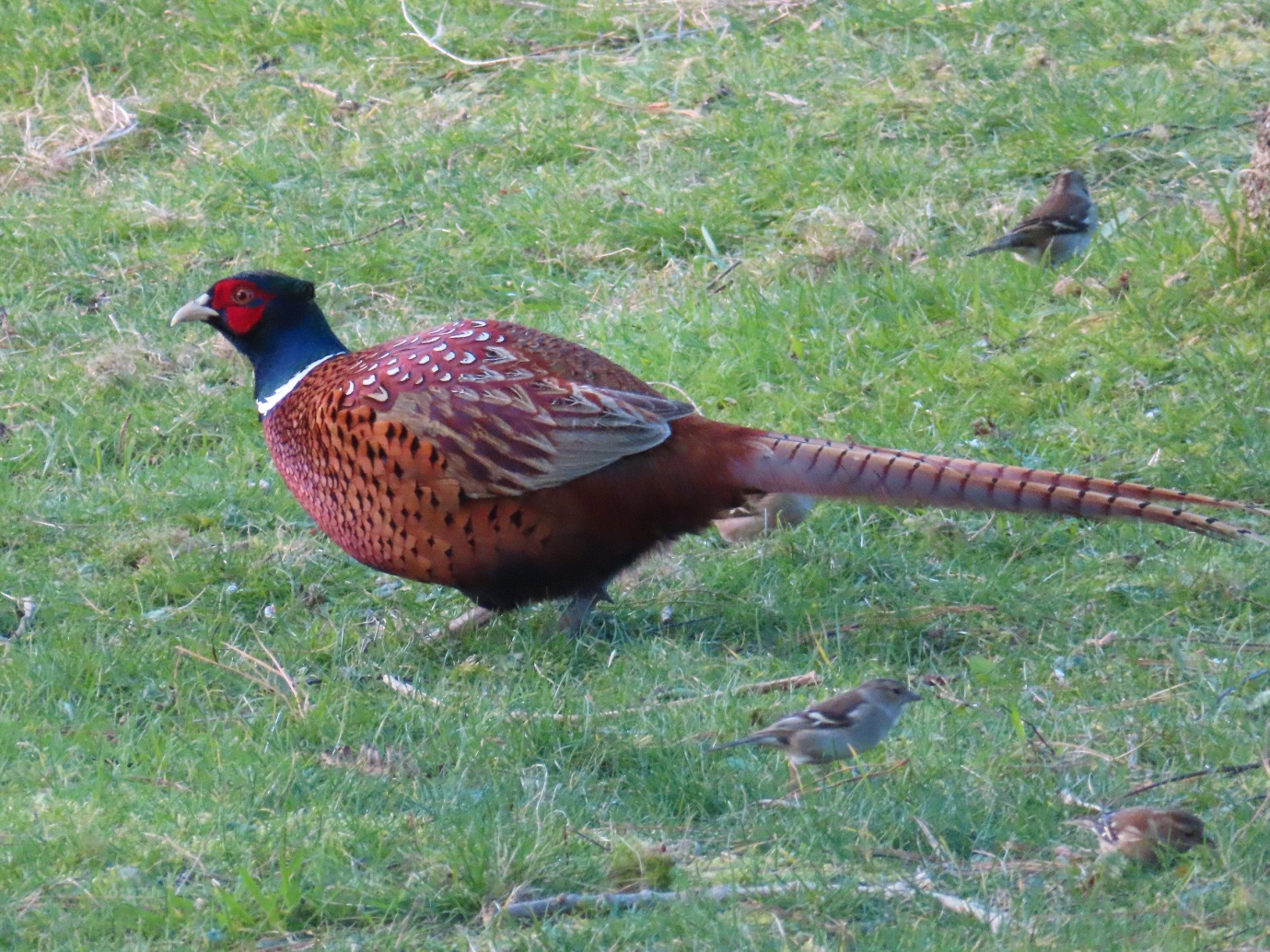 The pheasants only come to feed in the morning. It is amusing to watch the stately way the male departs if I get too close. The two females are slightly more hurried in their departure but they never go too far away and I often disturb them if I walk down the drive just a few feet from the feeders. A solitary Pied Wagtail visits every afternoon and can be seen cleaning up after the other birds have left. It is totally disinterested in my appearance and does not pause in its task. But is always alone. I have also seen a solitary Black Redstart a rare visitor to this area. 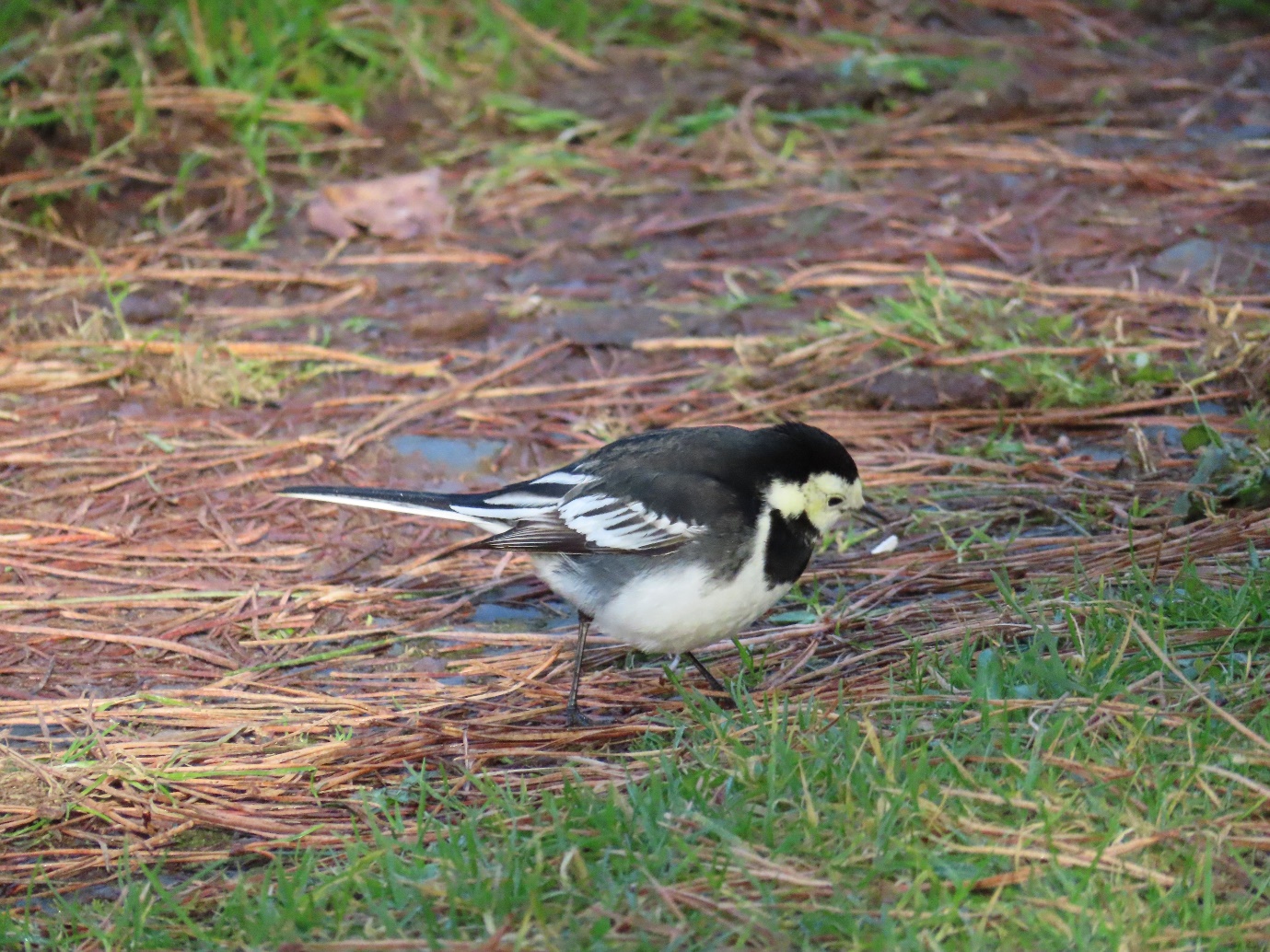 Many years ago, when living in the North East of Scotland I came across the most macabre scene. I was driving home at dusk through a stark landscape covered in snow. A farmer had nailed a dead crow to a fence, presumably to ward off its companions. It was scene straight from a Hitchcock movie and made a profound impression on me. The crows arrive here in the early morning and hang about the tall trees waiting for the food to appear. They do have a rather sinister look as they hunch on the branches of the highest trees. They are very clever and I have had to replace some of my hanging feeders to try and thwart their efforts. I have seen them shake some feeders back and forward until the seeds drop to the ground. They have also learned to open feeders with lids that ‘click’ open so a more secure lid is required (taping the lid does not work). Despite the fact that they eat a considerable amount of food set aside for the other birds I could not countenance harming them. Instead, I stand close to the feeders for at least twenty minutes to give the smaller birds a chance to eat first. There are much more difficult tasks especially on a frosty, sunny day. 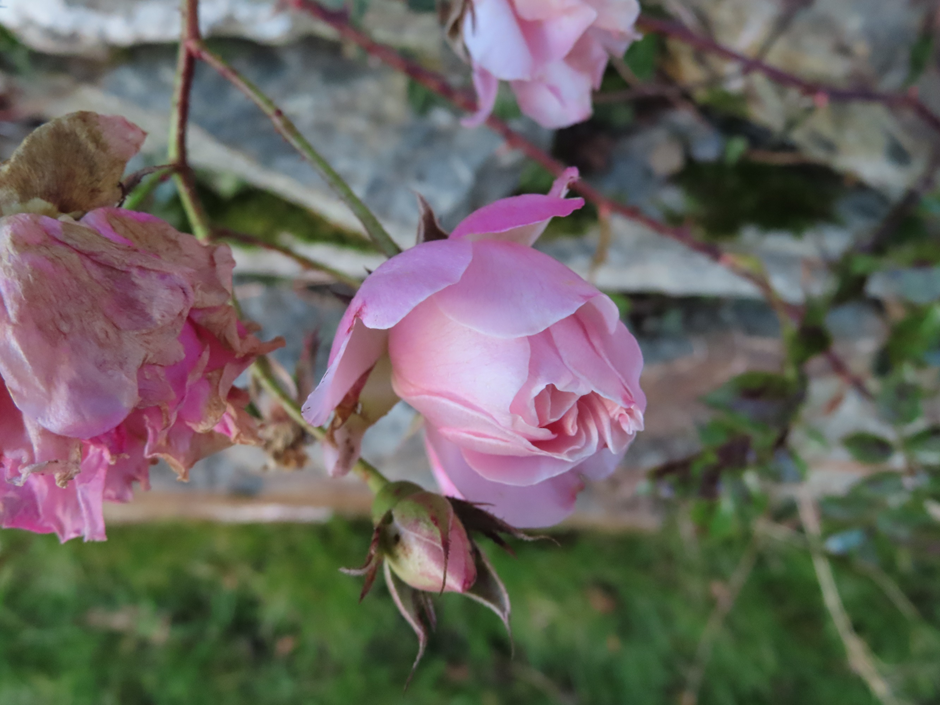 One of the little miracles that always gives me a smile as I wander around the garden. This rose survived a week of heavy frosts. 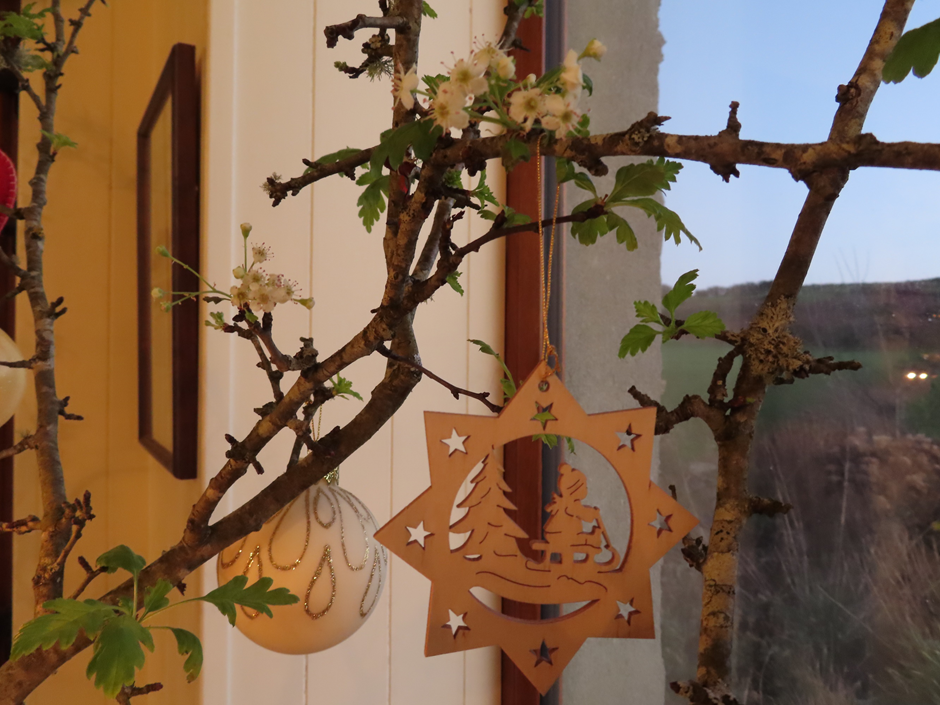 I have finally removed the Christmas decorations from my ‘Christmas tree’. It is now almost fully green as the leaves are following the flowers to give the impression that Spring is already here. I will leave it in place until they wither as it provides a cheerful reminder that Winter will soon be over.

One response to “Creating a Miniature
Woodland Garden”