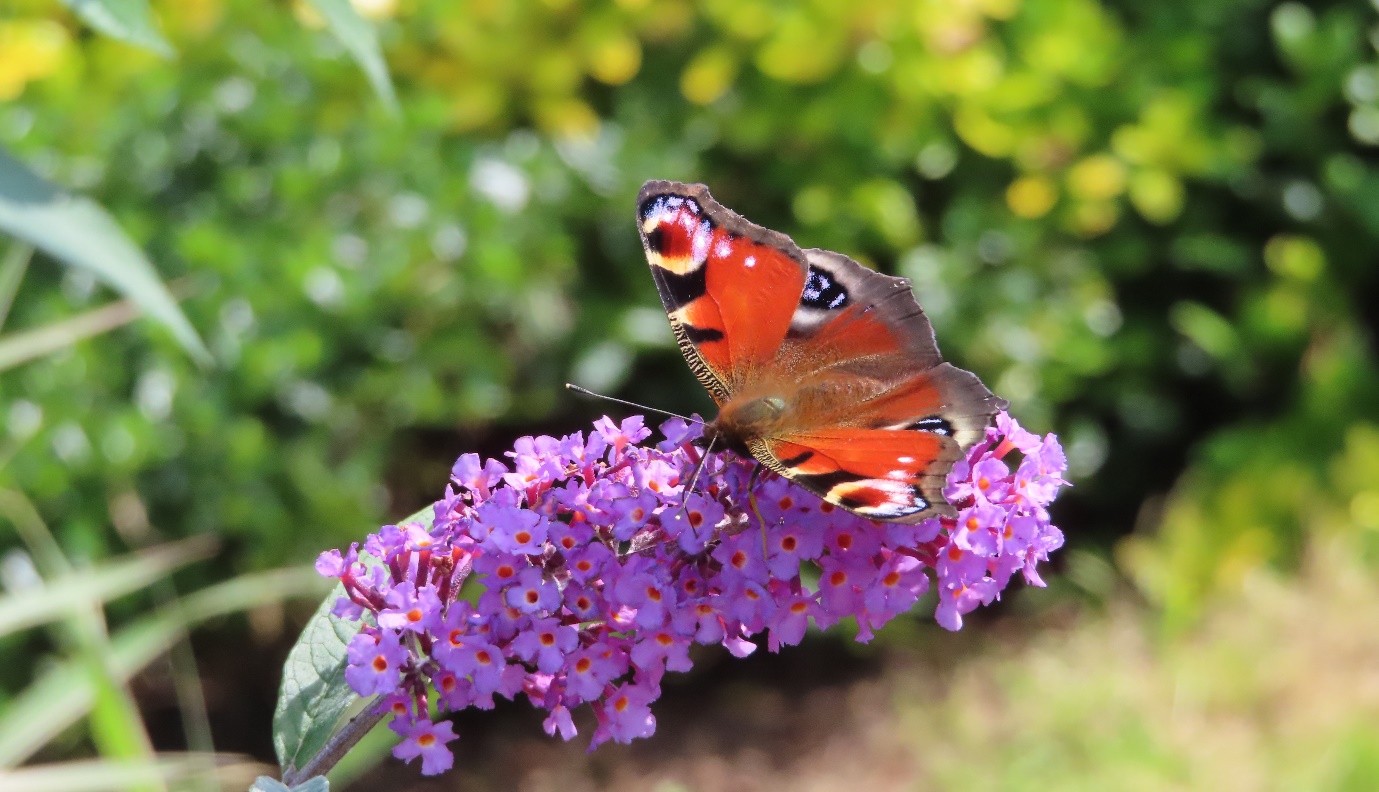 West Cork has a number of famous and beautiful gardens where their owners have combined native specimens with exotic plantings from around the world with great success. Once I had developed a basic shelterbelt around the garden here, I had intended to do the same. In the meantime, I would bypass the unusual plants in the two local garden centres, Future Forests and Deelish Garden Centre reassuring myself that I would be able to indulge my interests ‘in good time’. In this month’s edition of ‘The Garden’ the Royal Horticultural Society’s magazine there is an interview with the wildlife garden designer Joel Ashton who designs gardens that are rich wildlife habitats. On reading this I realised that without knowing it, I had undergone a philosophical change with regard to my gardening plans and that I am now a dedicated ‘Wildlife Gardener’. My attention became more focused on what nature has to offer rather than how I could manipulate it, or a particular plant, to fit in with my designs. 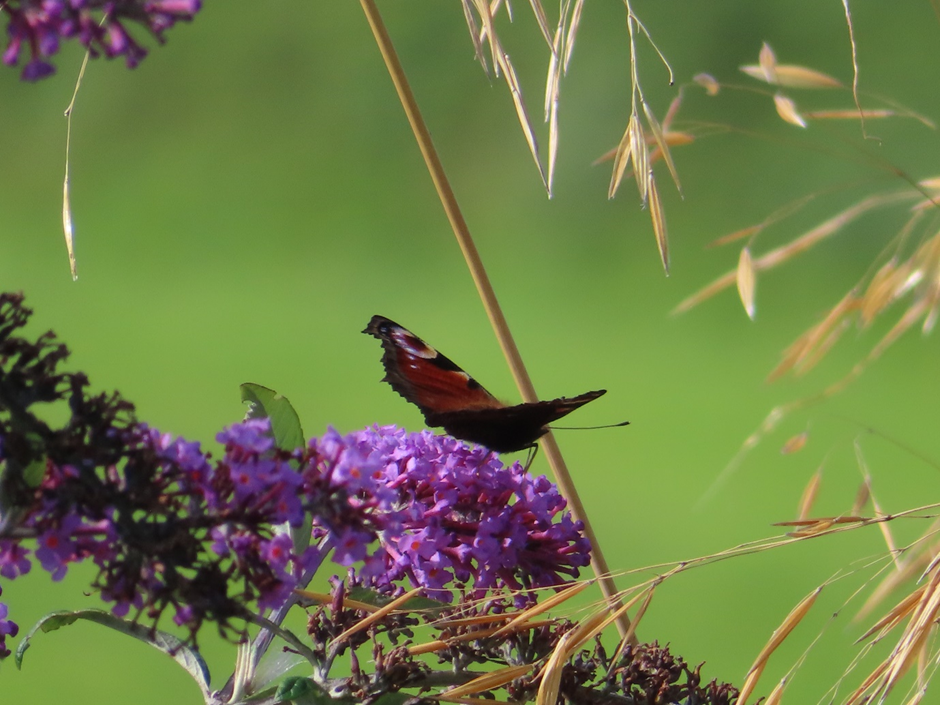 A Peacock butterfly on a tried and tested Buddleja.

Once the basic shrubberies and shelter belts have been planted my planting decisions are dictated by three W’s – weather, wildlife and wildflowers. The first I can’t control. With regard to the wildlife and wildflowers I have been singularly lucky in that all I have had to do is leave well alone. On the hillside to the east side of the garden I ran out of steam the year that I planted three shrubberies and I deferred planting the last. The next year the fourth space had a profusion of wildflowers and a tiny wildflower meadow was born while my plans for another shrubbery died. This was the start of my conversion. 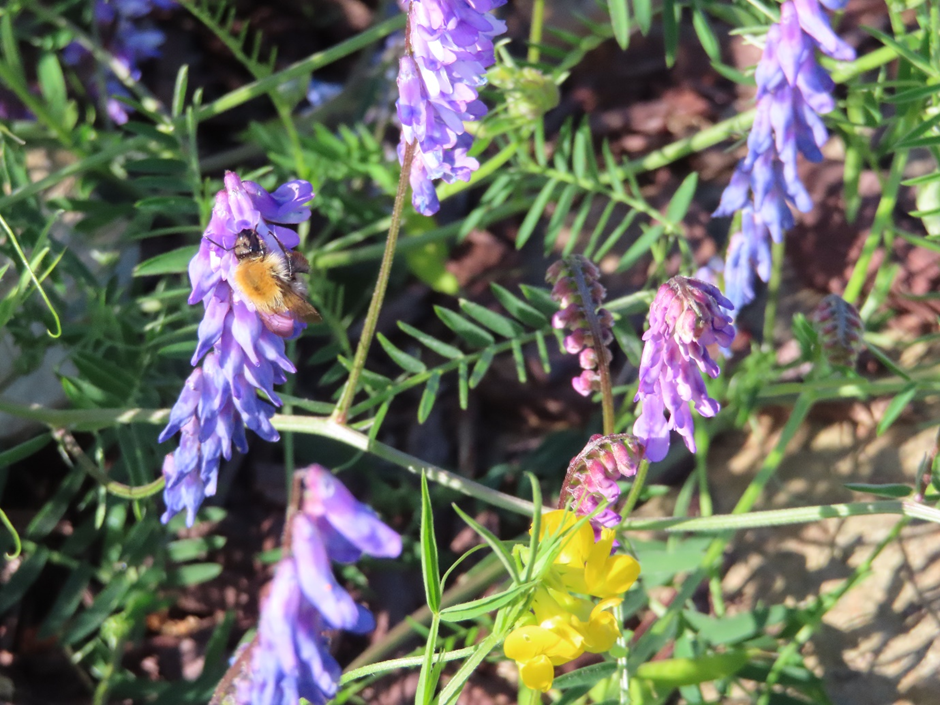 This year I have allowed the wildflowers to flourish wherever they choose. This has had an interesting impact on my vegetable gardens. These are three small exposed places that are waiting for my shelter belts to grow to provide them with some protection from the wind and salt. The wildflowers start to take over the bare soil in spring. Usually I would clear the area and keep it ‘weed free’ throughout the season. This year I have used the space required for my vegetables but allowed the wild flowers to flourish in the borders and free spaces. In places, this has meant that vegetables such as leeks and peas are completely surrounded by wildflowers. These latter seemed un-touched by the salt storm in June and also provided protection to the vegetables which was an unexpected but added bonus. Providing the right environment also attracts an extensive variety of wildlife to the garden.

A gatekeeper butterfly Pyronia Tithonus. I find these difficult to photograph as they are often on the move. They seem to like the wild heather that is taking over the northside of the garden but know how to show themselves off to the best advantage on the hydrangea below. I have had no success planting heather in this garden but the wild heather on the hillside behind the house has moved in and creates a beautiful display for months on end. All that I do is give it a trim once it has flowered. At the moment it is being visited by too many bees to count.

I have recently begun to catalogue my wildflowers and have identified over seventy so far. The seeds of these must have been hiding in soil that was grazed for many years. Each one has something to offer a living creature be it bee or bug and most have the added bonus of being beautiful. 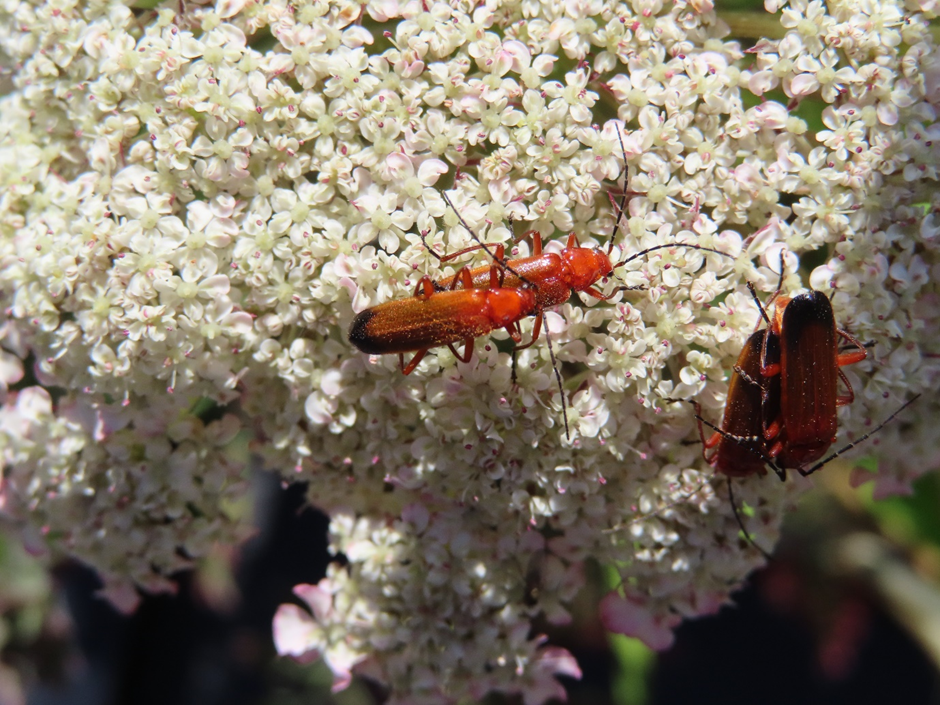 The flower of the Sea Carrot is particularly popular with the common red soldier beetle Rhagonycha fulva or should I say beetles. They occupy my garden in their thousands and, as can be seen above, spend most of their short summer mating. Luckily, they also eat aphids and their larvae eat other pests such as slugs and snails although it is not obvious when they find the time for this. 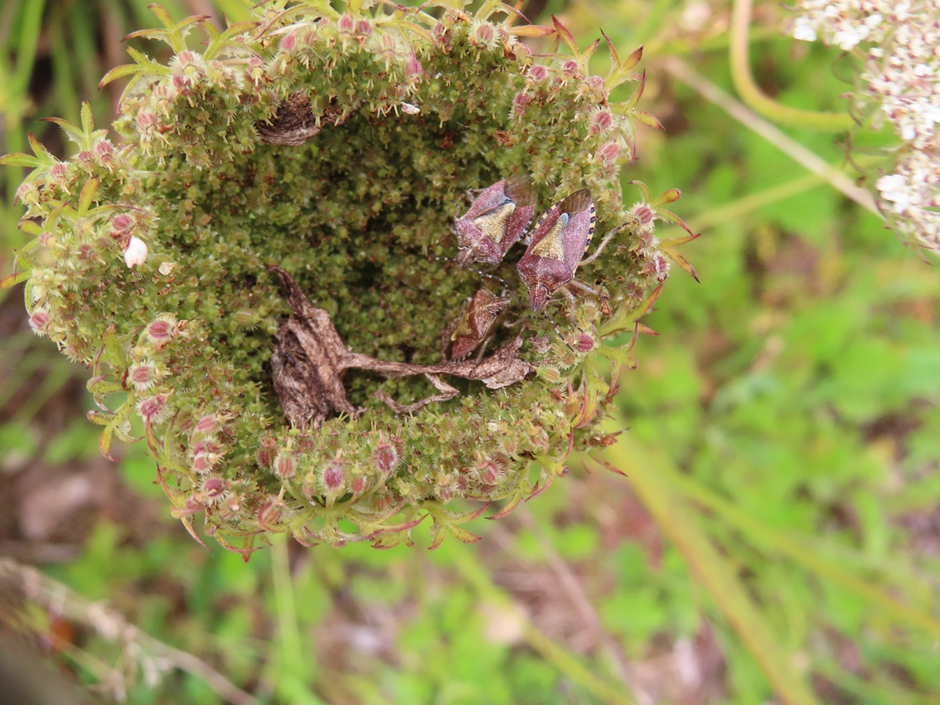 The Sea Carrot acts as a host to many creatures throughout its lifespan. I still have to identify the creature below but I think the bugs above are Hairy Shieldbugs Dolycaris baccarum. You can find these in the seed head of the Sea Carrot and they are as profuse as the soldier ants. I have no information as to their mating habits! 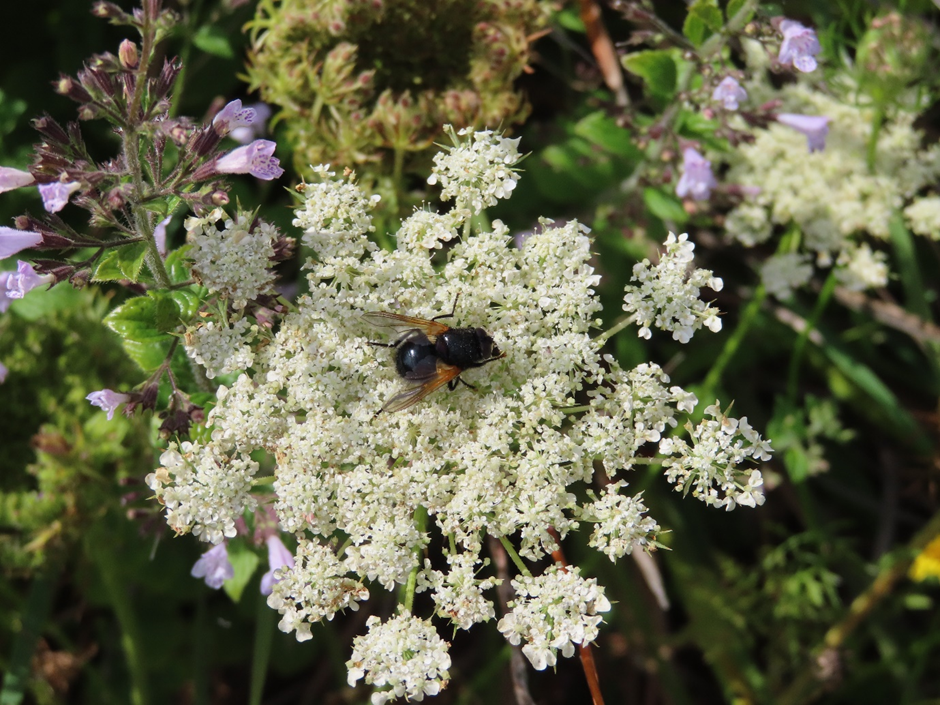 I was more concerned than pleased when the Peacock butterfly appeared in the garden in March. It seemed very cold at the time and I wondered how they would survive. I was even more concerned when they disappeared. In fact, until a week ago, there were almost no butterflies to be seen. I have blamed the unpredictable weather where very warm days are followed by unusually cold nights. Weeks of drought have been followed by torrential rain and now thunderstorms. In addition, the popular source of food for the butterflies, the Buddleja, has been behaving very oddly. I have a number of varieties in the garden. All are popular with the butterflies but the flowers of each bush seem to last just one day and are black by the morning. This has not given the butterflies much of a chance to feed. Luckily there are other sources. Verbena and Inula Hookera are two favourites. 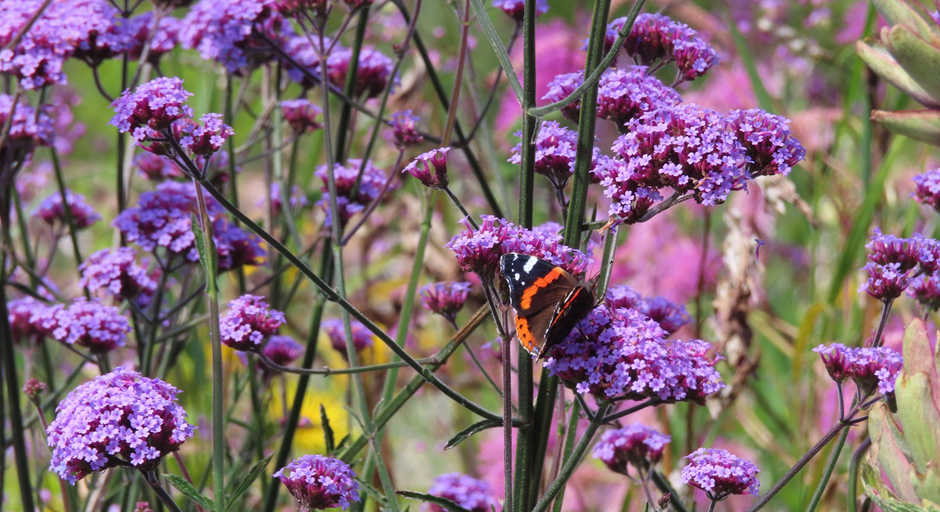 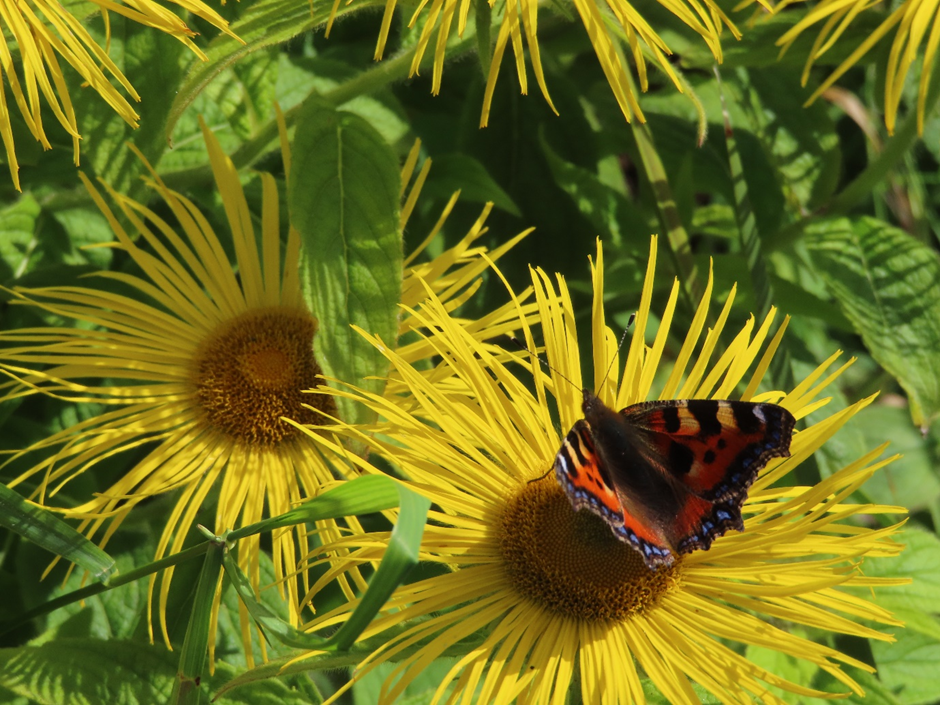 A Small Tortoiseshell Aglais urticae feeding on an Inula Hookeri. 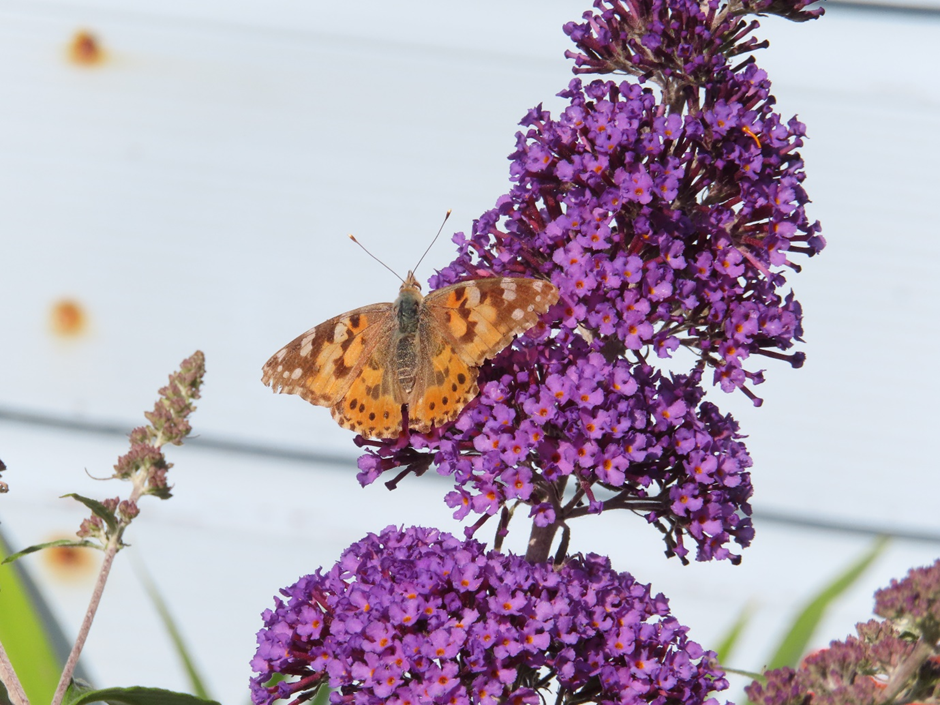 A Painted Lady Vanessa cardui managing to get some food from a buddleja before the flower dies. 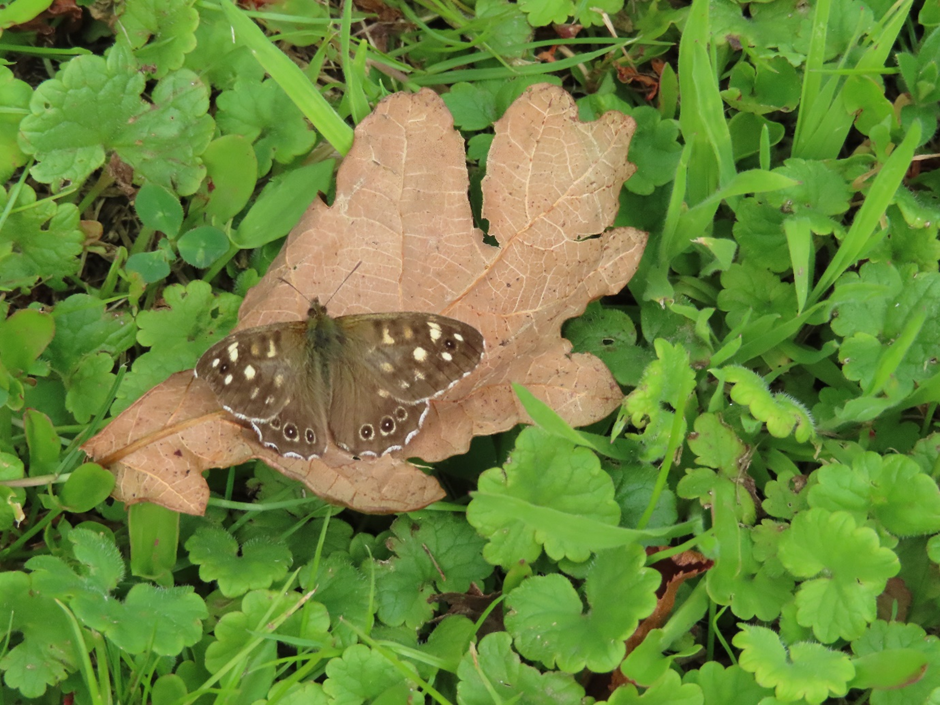 This is the first time that I have seen this this butterfly the Speckled Wood Pararge aegeria. It inhabits the small copse at the side of the house and is rather shy. 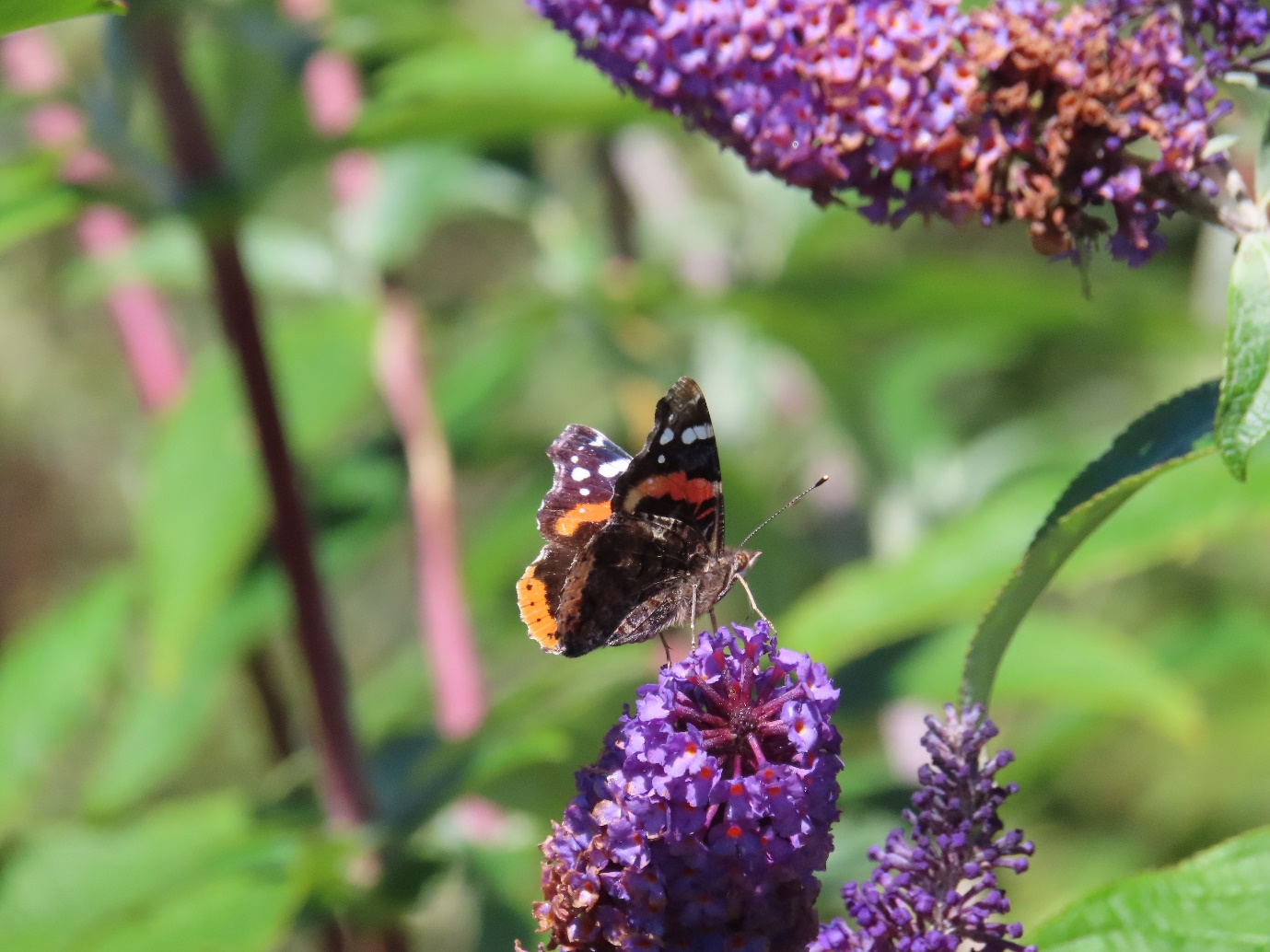 Growing Buddleia may seem to go against the notion of a wildlife garden. They are seen as an invasive plant in many countries. Not only do some varieties seed easily in the wild but they can displace other important food sources for wildlife. It is recommended that you deadhead the plants to avoid this. I have also noticed that the orange varieties are even difficult to reproduce from cuttings here and are equally popular with the butterflies.

Joel Ashton identifies ten ways in which you can transform your garden. One of these is to allow some of your lawn to grow instead of cutting it. He also recommends suitable wildflowers. As I have said I have been lucky here and now have decided that I will not ‘add’ any wildflowers to my extensive collection but will see what grows spontaneously and what will ‘arrive’ naturally in the years to come. The following photographs of parts of my driveway are a good example of what can happen if you do not have a manicured lawn. 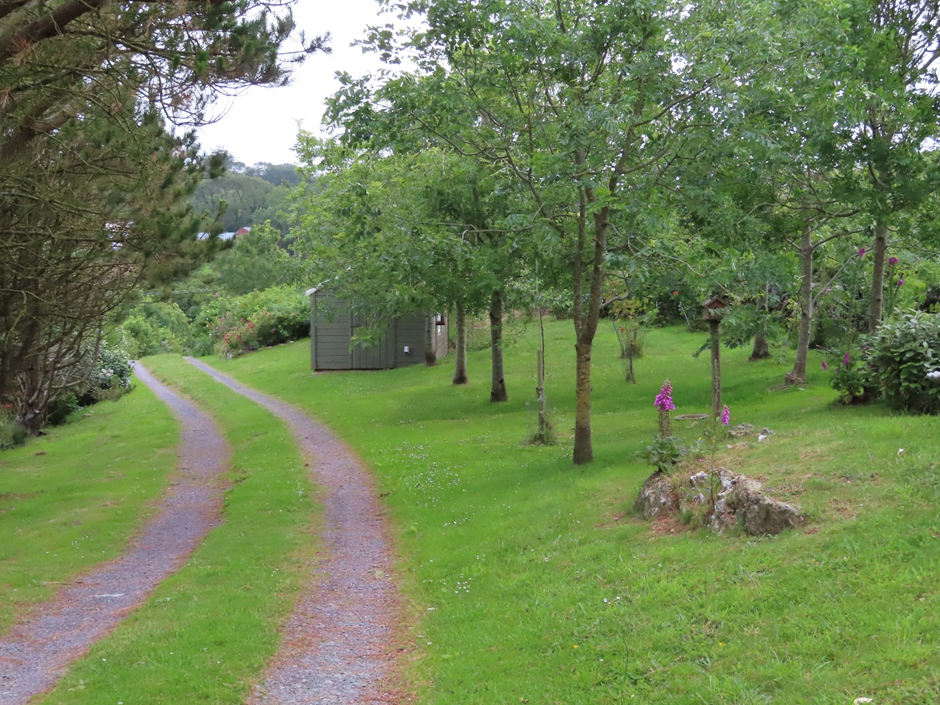 The driveway close to the house. This can be a cool green oasis in summer when it is too hot to work in the shade. At the moment I am planting a shelter belt on the edges to protect from the south and northwest winds. The grass I cut regularly. 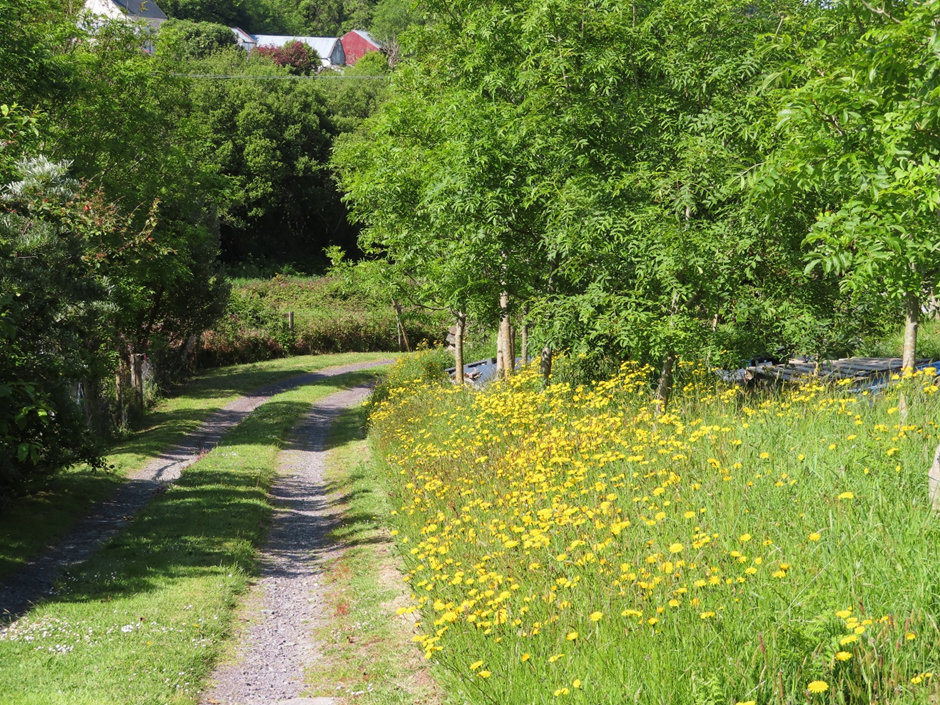 This is an area at the bottom of the drive. The grass is allowed to grow from early spring. Although only yellow flowers can be seen here, this area has a multitude of wildflowers which last throughout the summer.

The number of wildflowers, bees and bugs in my garden is an indication as to the rich life that can exist if we do not ‘manicure’ our gardens too much or use fertilisers and ‘weed killers’. Advice as to how to transform your garden can be found in ‘Go Wild in Your Garden’, by Kate Bravery and Joel Ashton in the August edition of The Royal Horticultural Society’s ‘The Garden’. The national Biodiversity Data Centre is also a very useful source for identifying wildlife.

There are few disadvantages to being a wildlife gardener. I have been lucky to manage to fill half my freezer with redcurrants, white currants and blackcurrants snatched from the jaws of the birds who had a far better crop than I did. I had hoped to complete the crop with a few bags of Aronia berries. These are too dry for my liking but as they are one of the best sources of antioxidants I always add them to my cordials. The birds have had the last laugh. This year they got to the berries before I had even noticed that they were ripening. So much for my philosophy of sharing!