Birds and Other Creatures 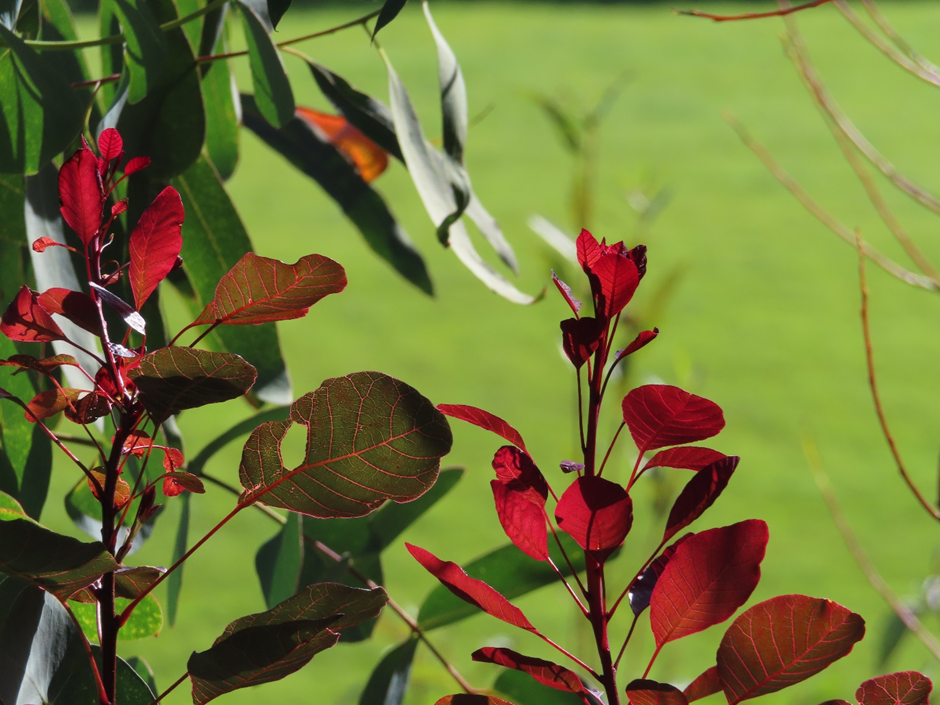 The pheasants have made their presence known again as they join the foxes in their noisy calls. Now all we need are for the crows to return and the raucous section of the winter orchestra will be complete. The long dry summer has distorted the foliage in the garden and some of the trees changed colour and lost their leaves months ago. I am hoping that this is not a bad sign. This Cotinus Royal Purple does not have to do any work to produce dramatic foliage and it is at its best at the moment. 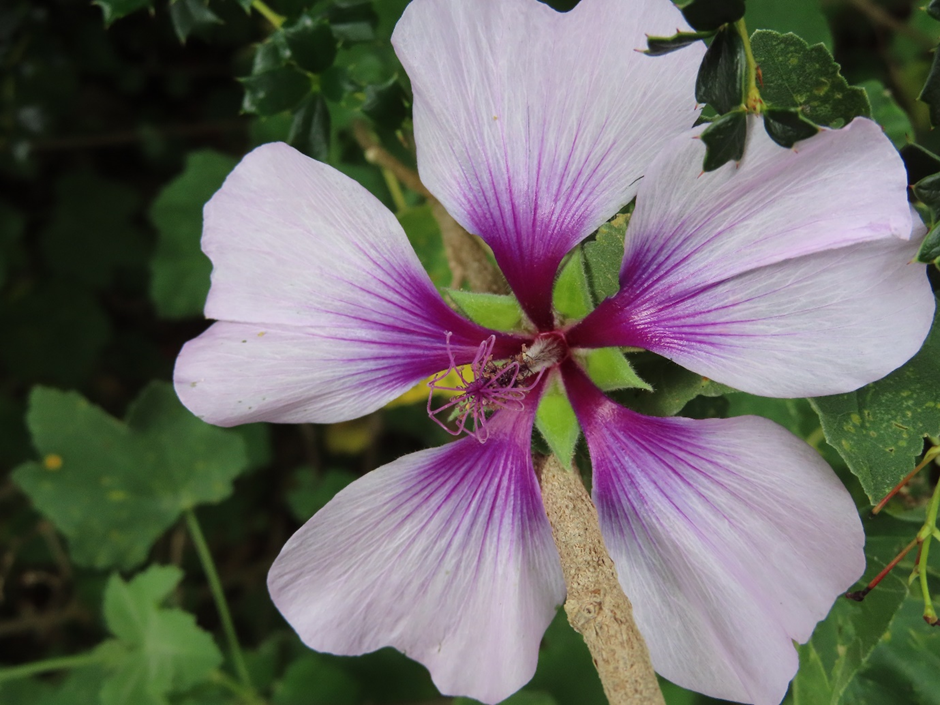 When I started creating this garden, I tended to plant shrubs and trees closer together than usual in the hope that they would protect each other from the brutal winds. I also assumed that there would be a heavy attrition. In fact, almost everything survived. This now means that some of the plants such as this tree mallow Lavatera maritima are fighting for space. I may have to do a major overhaul of my planting scheme next year. 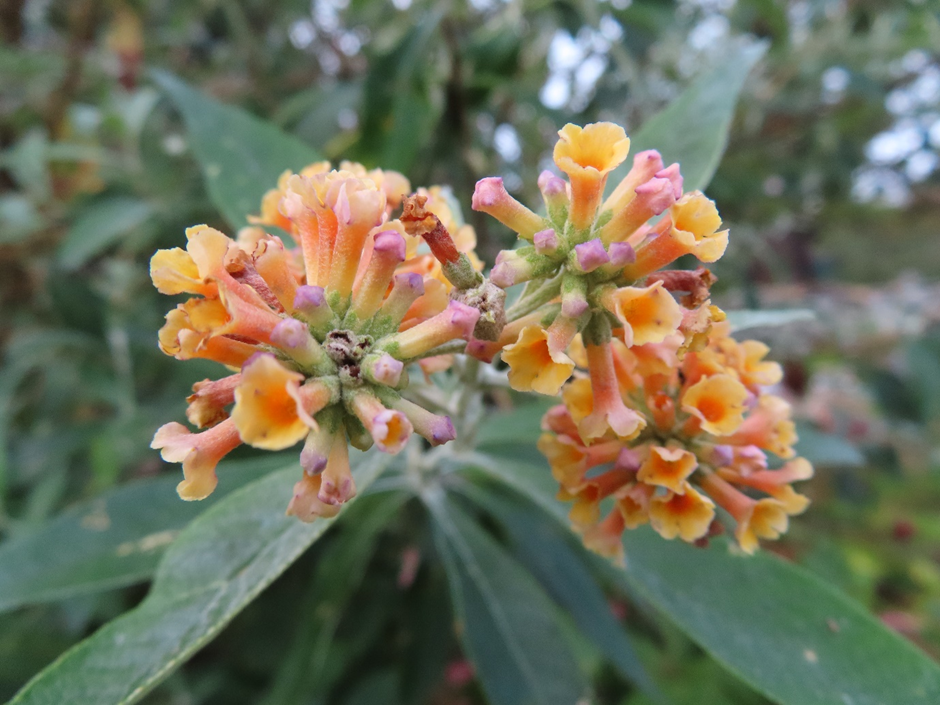 The buddleias have also started to flower again after deadheading. This is a good thing as butterflies and bees are still occasionally visiting the garden from time to time and it is nice to know that they have a variety of flowers to choose from. 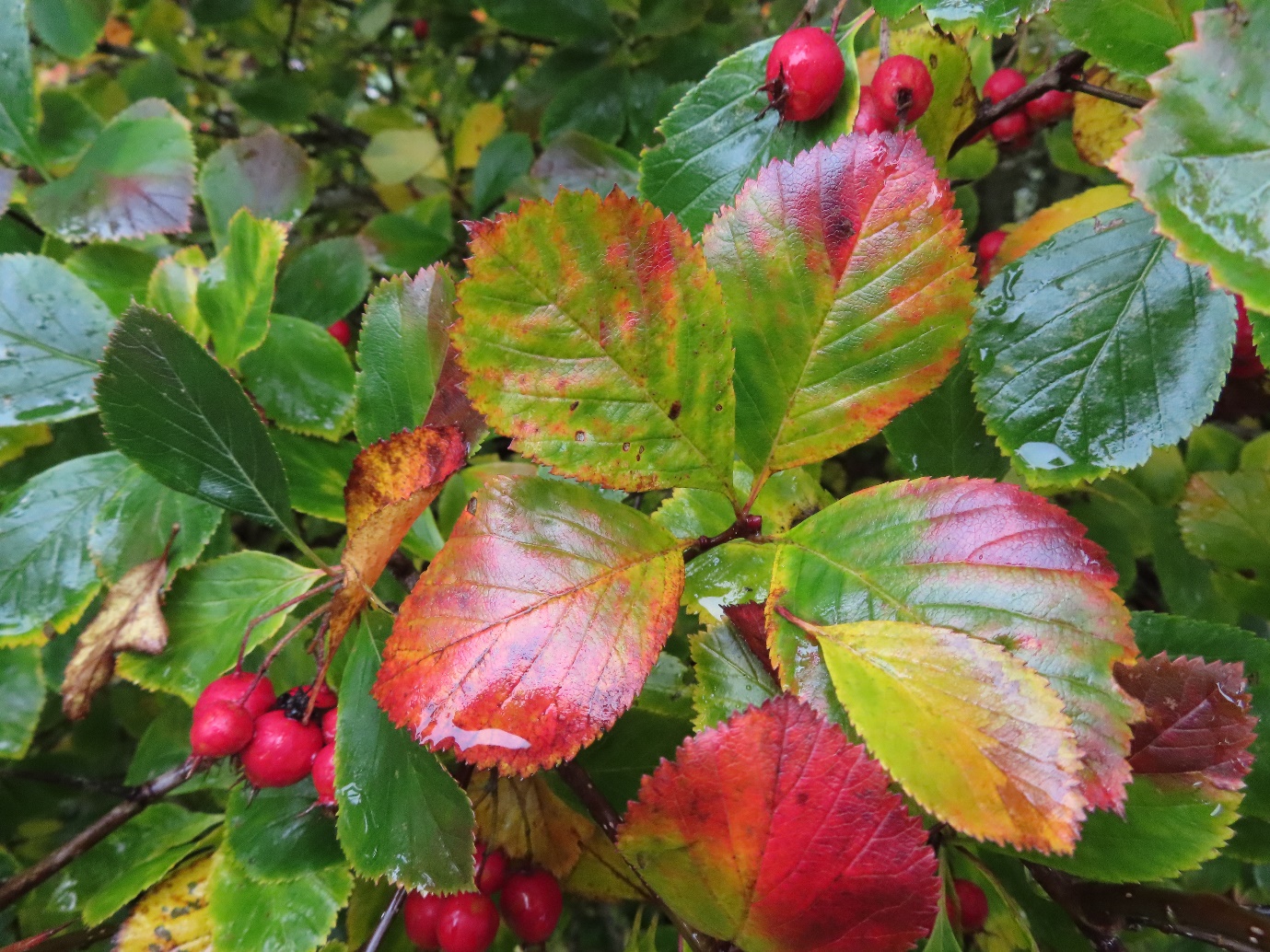 This Crataegus prunifolia has so many good qualities that it is hard to list them all. It makes the perfect windbreak, was untouched by the drought this summer, grows quickly into a thick bush which the birds love and has dramatic autumn foliage as well as berries. 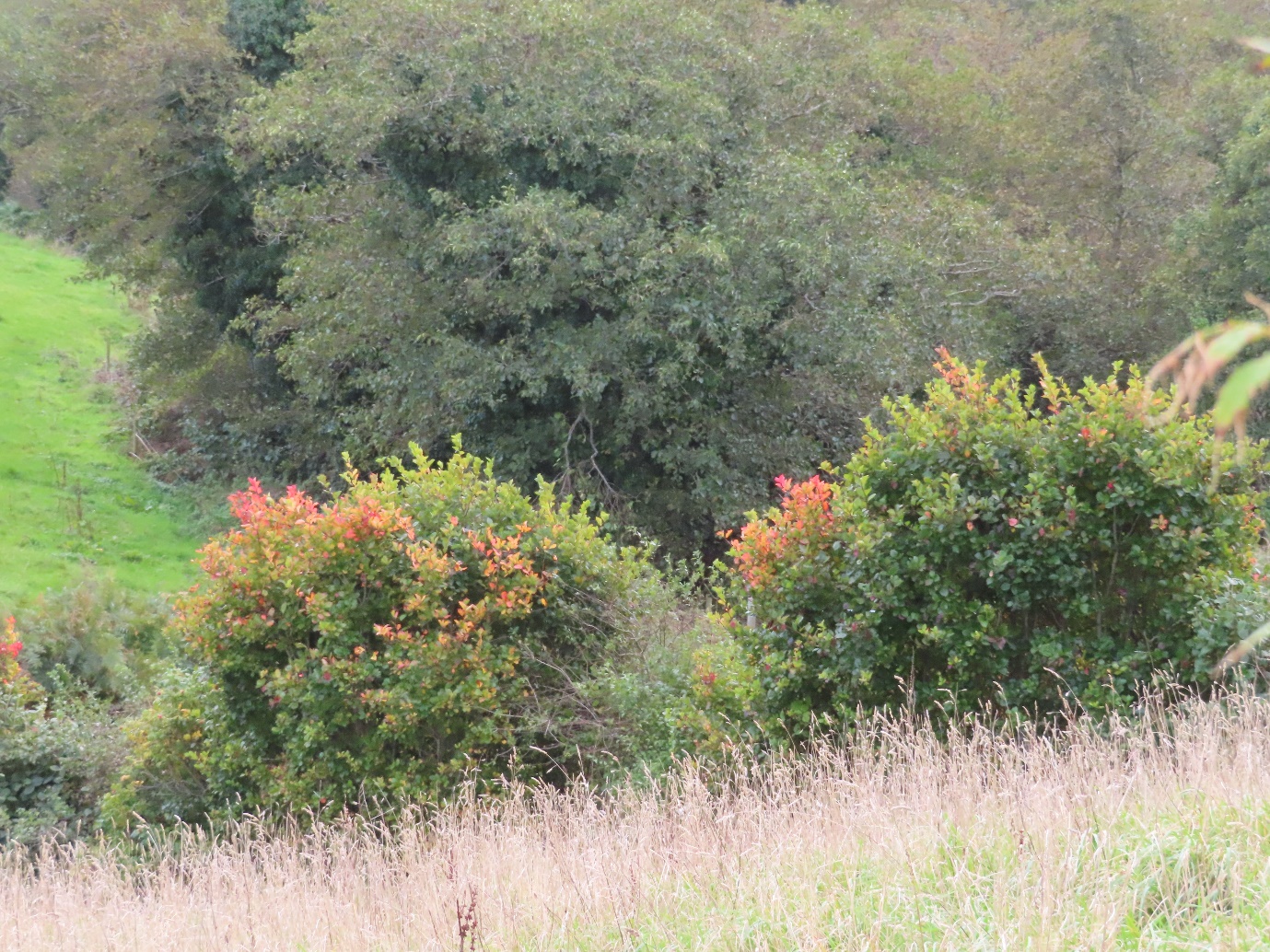 I am still working on turning one of my small fields into a tree and shrub filled space. I planted Crataegus prunifolia on the exposed, steep south west boundary and as usual it is thriving. This hedge is just three or four years old and has surpassed my expectations. I like its natural shape and it will now also provide a prickly safe haven for the smaller birds who love the ones in the garden. 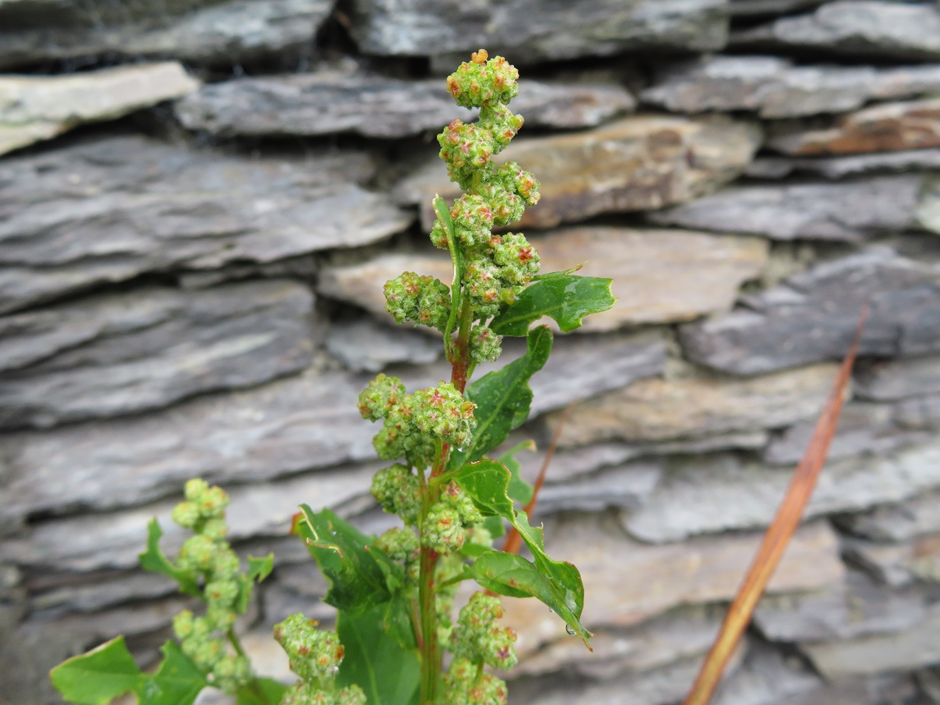 This Fat Hen is a rather unassuming wildflower which has seeded itself in one of my flower pots and is still looking very healthy. So far it does not seem to have any visitors but I will be interested to see if anything likes its seeds. 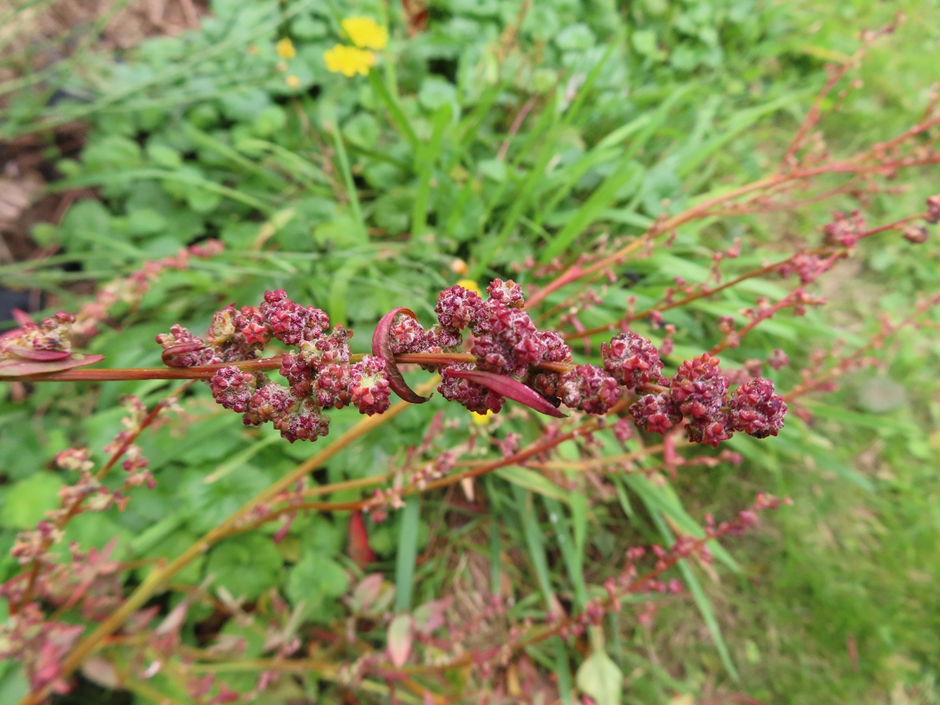 As I was taking this photograph, I was aware that the trees around me were full of birds. These turned out to be chaffinches and as most of the branches of the plant were stripped bare, I suspect that they may have thought that their food source was under threat and that I needed to be warned off. It will soon be time to put out the feeders but the garden is still providing a plentiful supply of seeds thanks to the wildflowers. 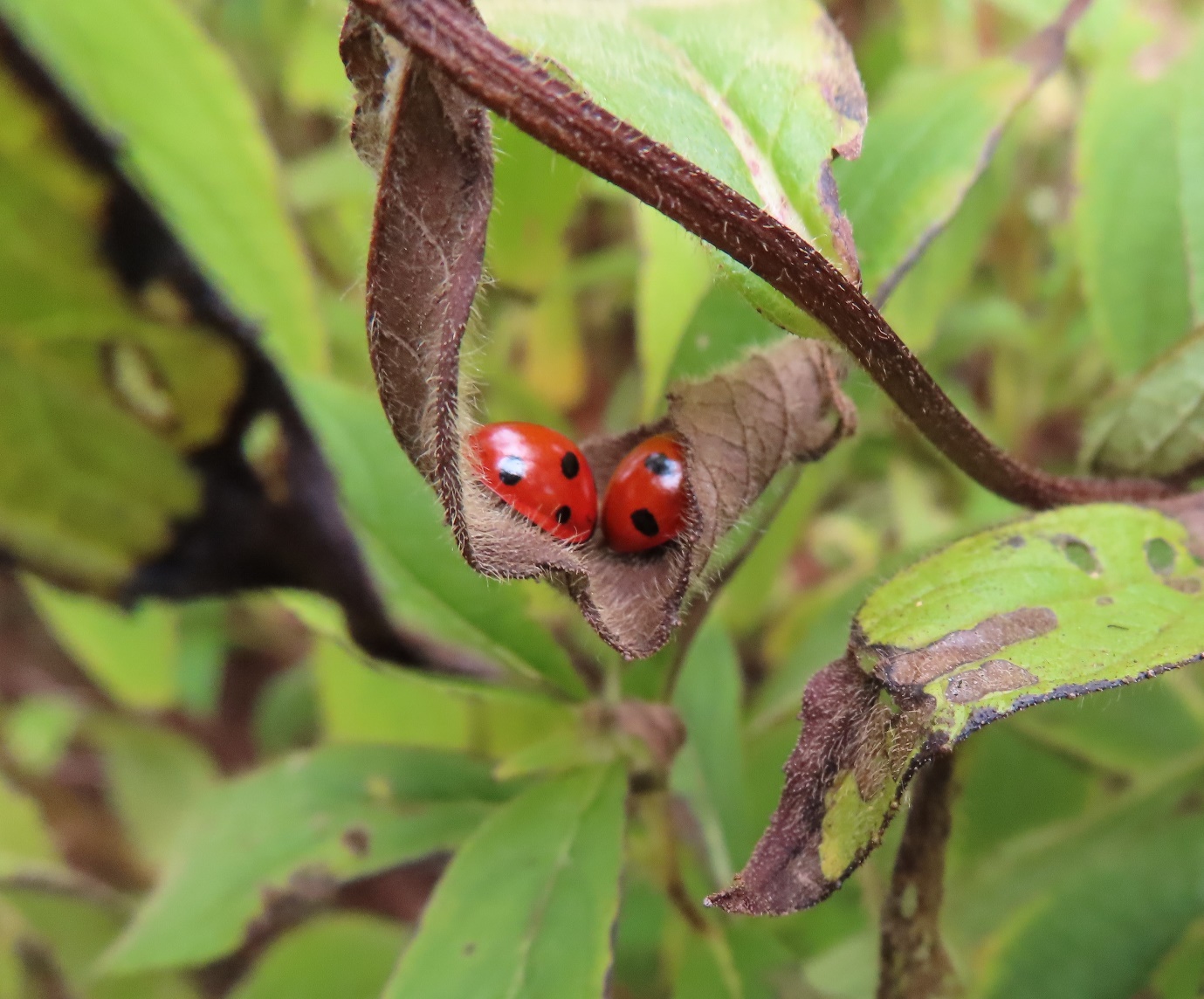 This is one of my favourite photographs of all times. These two ladybirds seemed to be using the dead leaf of an Innula hookeri as a hammock as they swayed gently in the wind. The plant protected them from the howling gale that was assaulting the garden and I think that they looked very cosy. I keep returning to the spot to see if they will reappear even though I know that it is most unlikely but it was a joy to watch them. 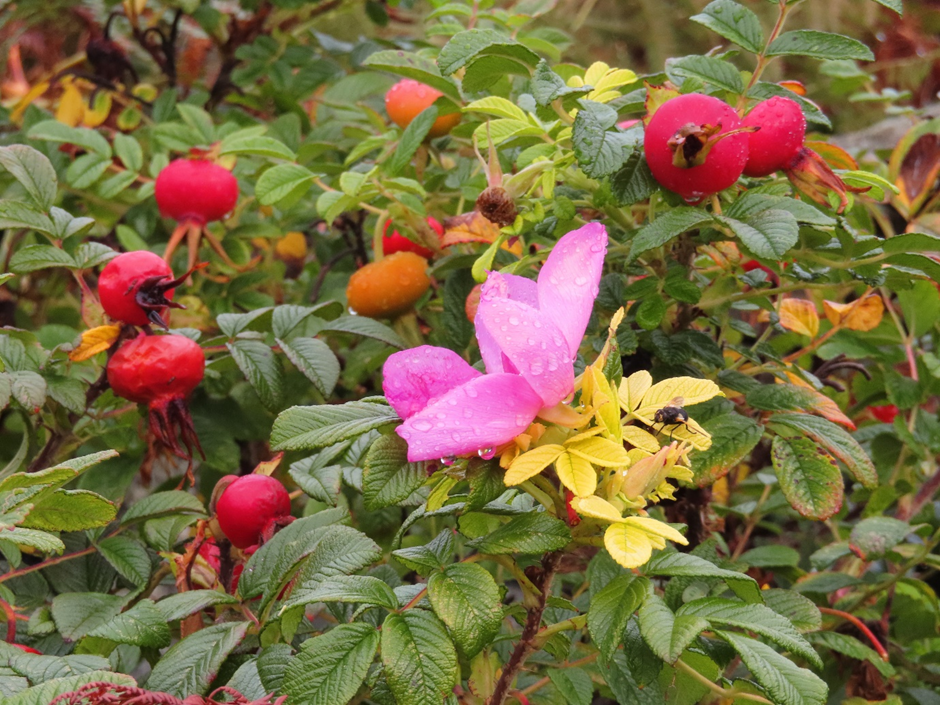 The roses are still producing a few new flowers and leaves at the same time as the rosehips are ripening. Sadly, not enough are ripening at any one time and I will leave my syrup production until next year. 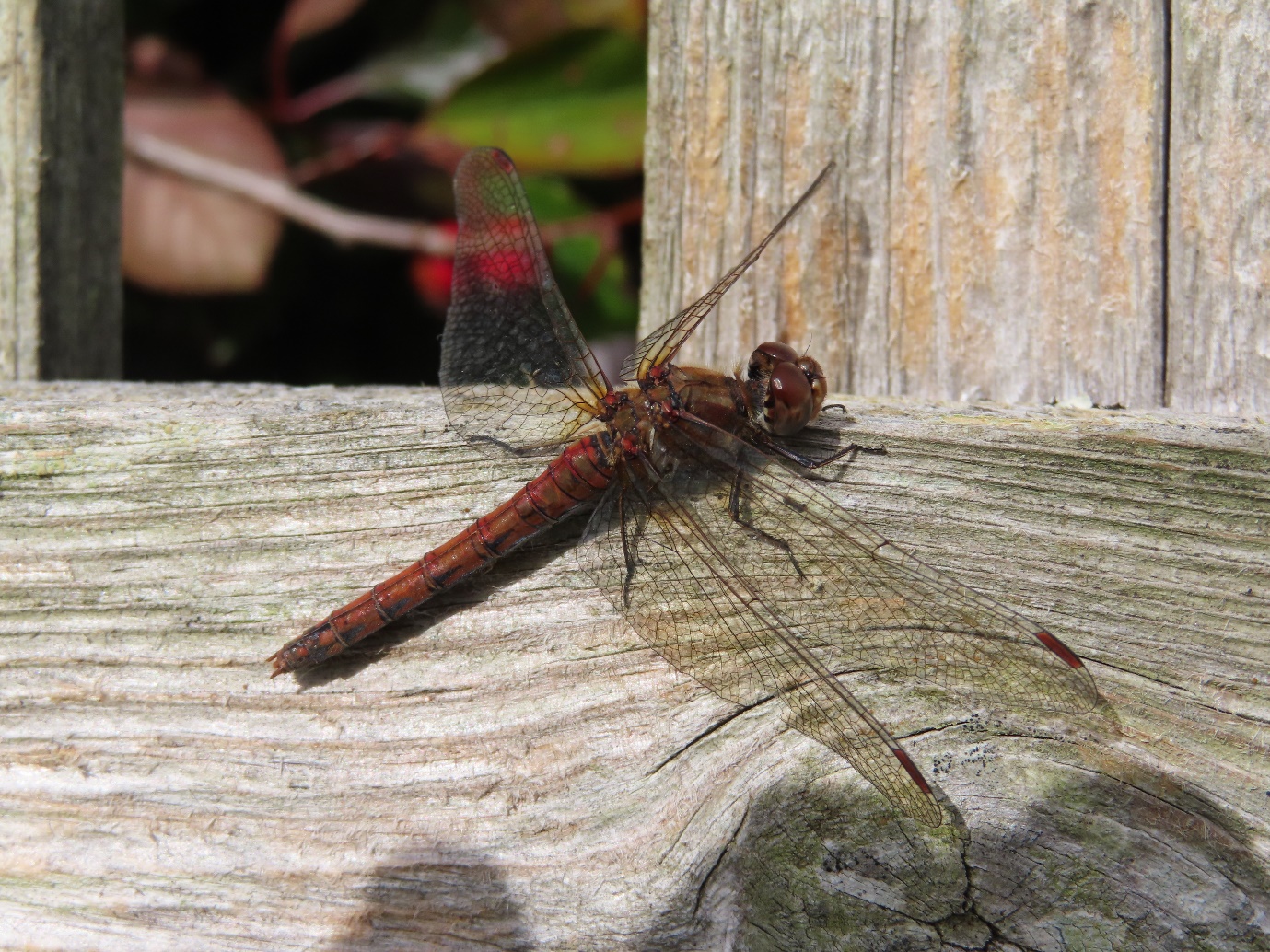 This is one of the first times that a winged creature has stayed still for long enough for me to take a reasonably good photograph although I have hundreds of blurry images that would be very useful in a quiz. My attempts to accurately identify this lovely model are hampered by the common features of many insects. An I never get close enough to the creatures for ‘close examination’, never have a reference book to hand and have no intention of risking injuring them by catching them for a better look I am just content that they visit my garden. 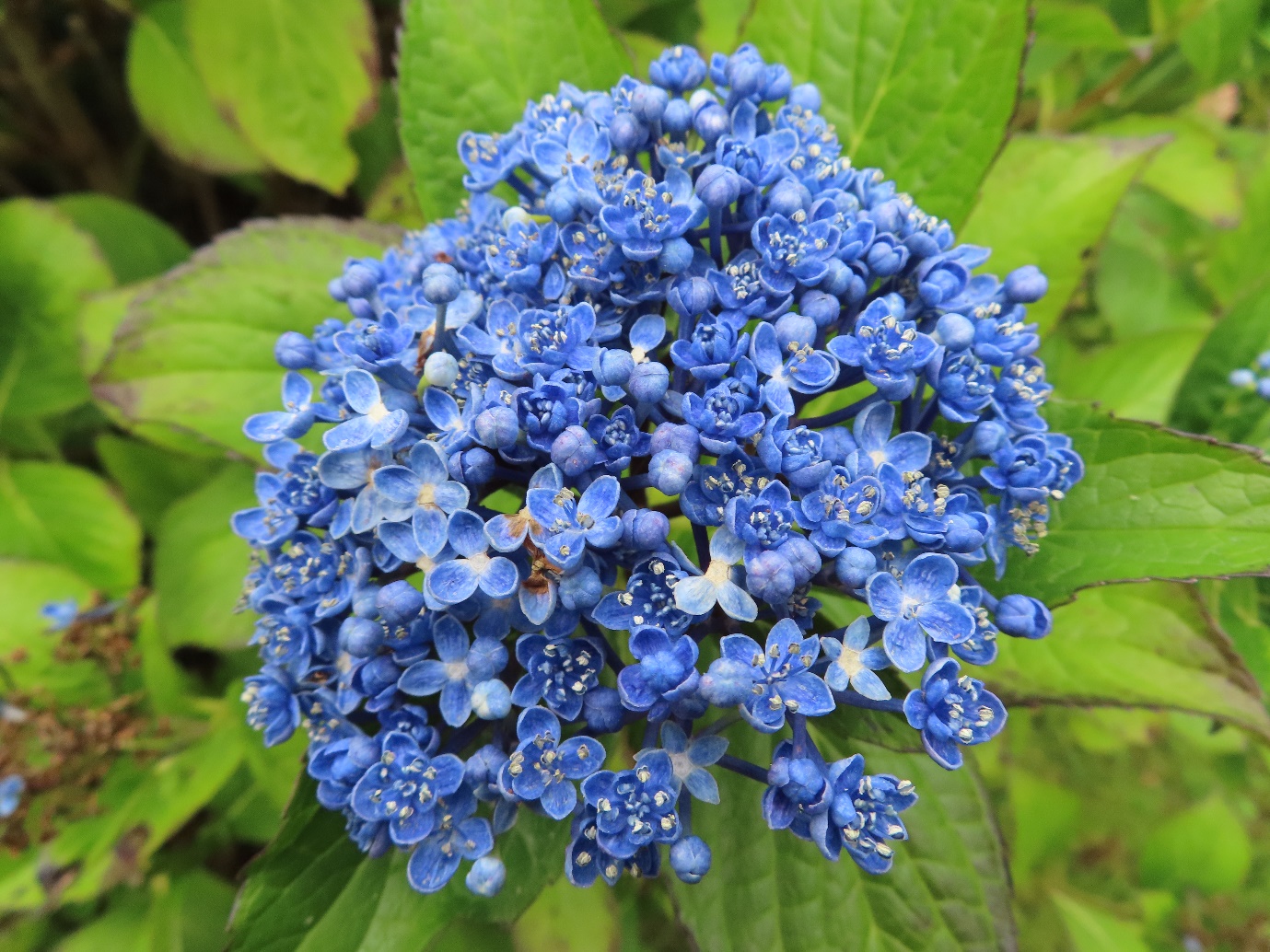 The Hydrangea Ayesha has responded to my dead heading by producing another set of beautiful flower heads. I am waiting to see if they turn black as usual and will be pleasantly surprised if they don’t. 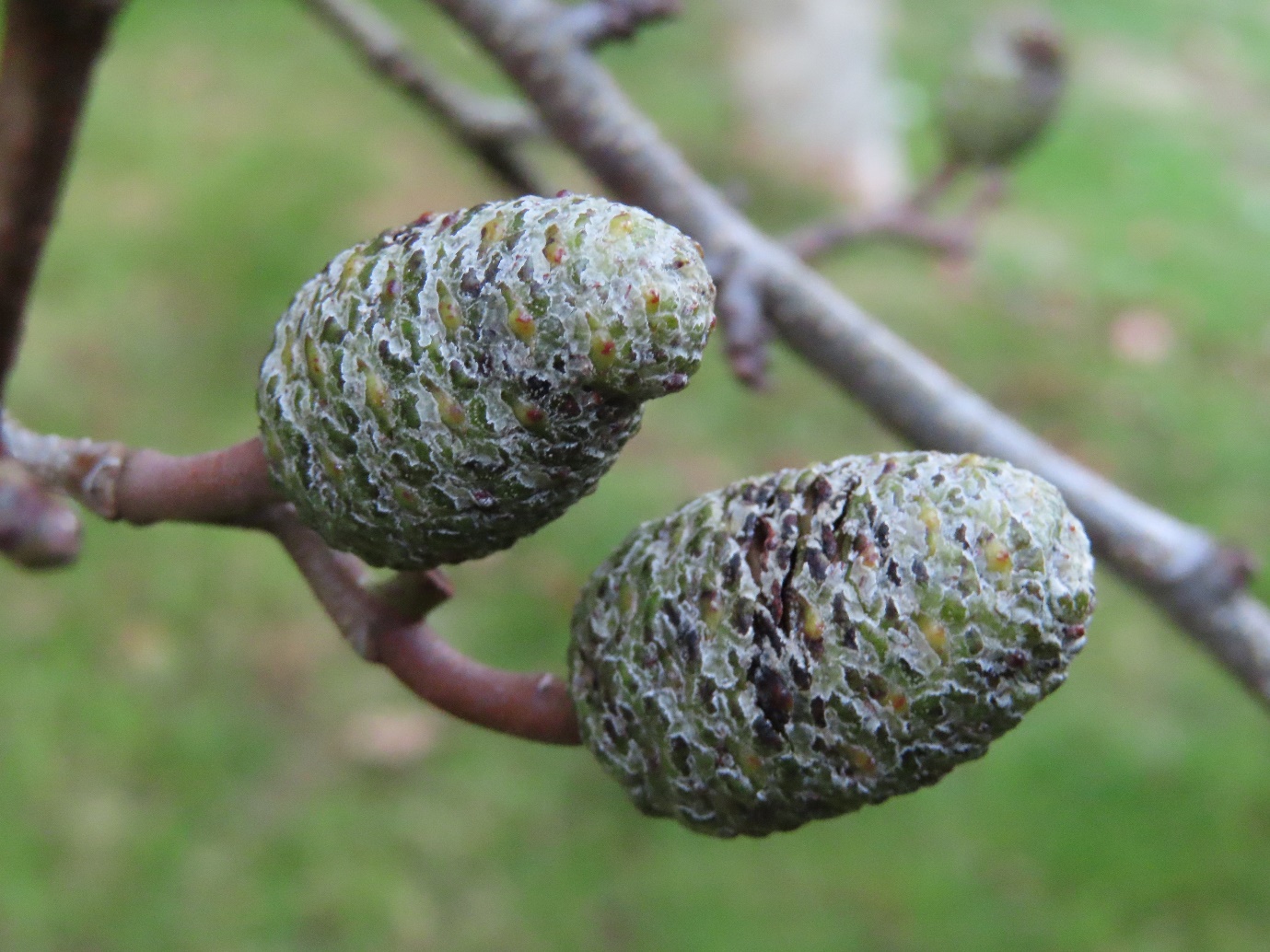 My Italian Alder have done well this summer and despite losing a lot of leaves all still look healthy. I was concerned as one died last year after nearly thirty years of braving the elements at the top of a windy hill. I am even more surprised that its replacement has survived the unnaturally dry summer although I did pay particular attention to its needs and watered it regularly. I am also using an alternative gardening technique: keeping my fingers crossed. 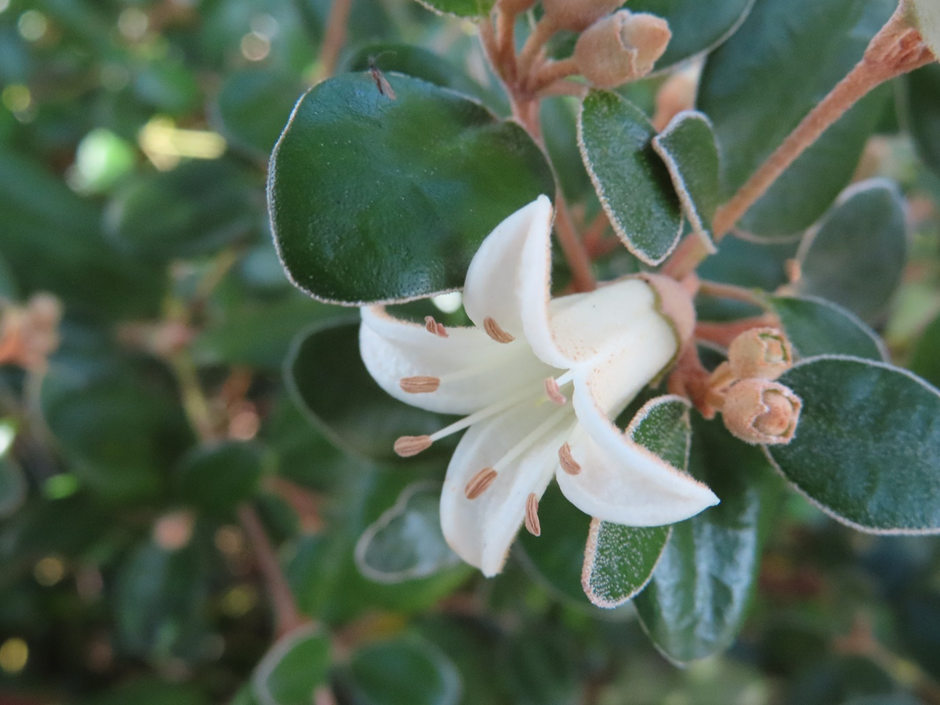 The totally reliable Correa Backhouseana is now full of flowers which last for months and well into the winter. Apparently, it is considered to be Australia’s ‘Fuchsia’ so it is interesting that it is growing quite happily under a conifer and beside a very healthy looking, spreading fuchsia, both in partial shade. Initially I had assumed that the space was uninhabitable and have now added two more Correa species to see if they fare as well.

This seems to be a new wild flower to the garden which I only discovered the other day. I have not yet identified it but its long arching stems are long and graceful and am happy to have it in the garden. 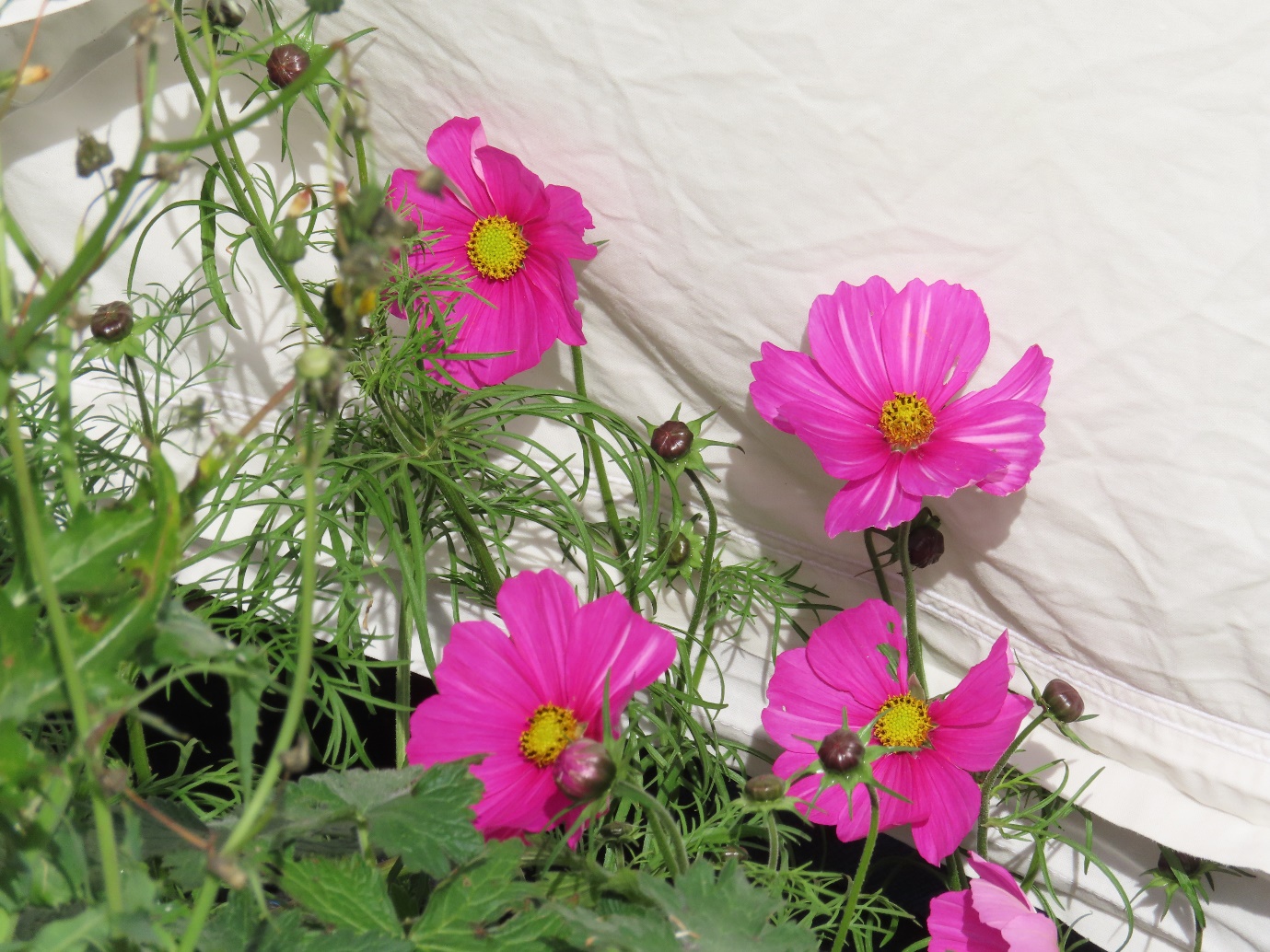 The best things in life are often gifts. And if they brighten up the laundry it is even better. This could become a fashion!