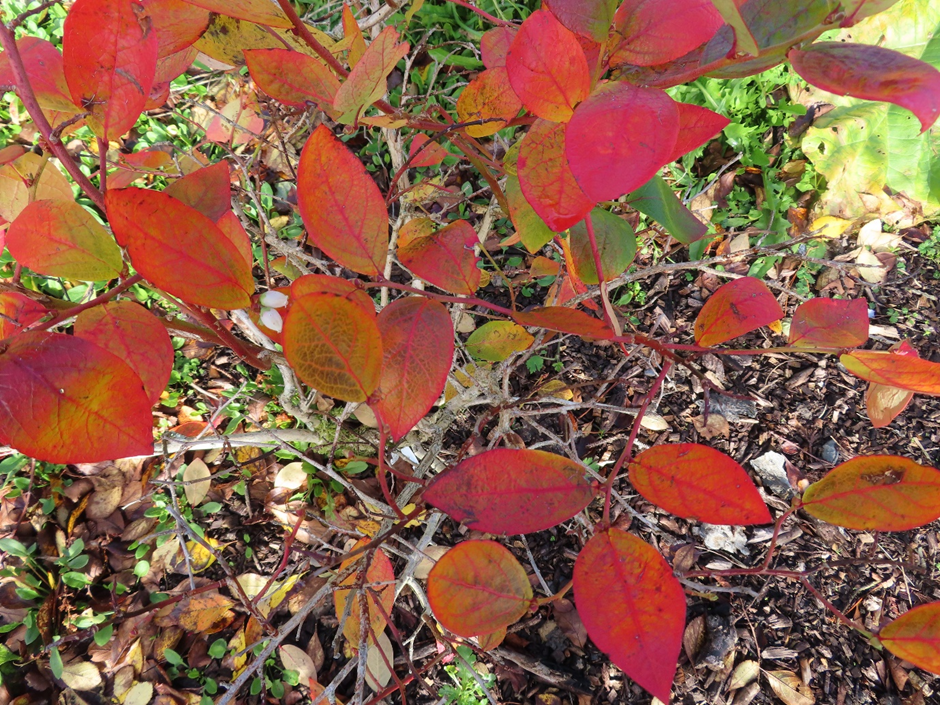 The autumn colours have been very impressive this year, as this young blueberry bush demonstrates. However, they lost their leaves very quickly as they were exposed to the series of storms that have battered the garden on and off for weeks. By next year, I am hoping that the hawthorn hedge that I have planted will be high enough to provide more protection to this part of the fruit garden.

The crab apple trees are proving to be one of the most resilient tees in the garden and have produced some impressive colour combinations. Most have been planted for five years or more and I have had no casualties yet despite their exposed position. 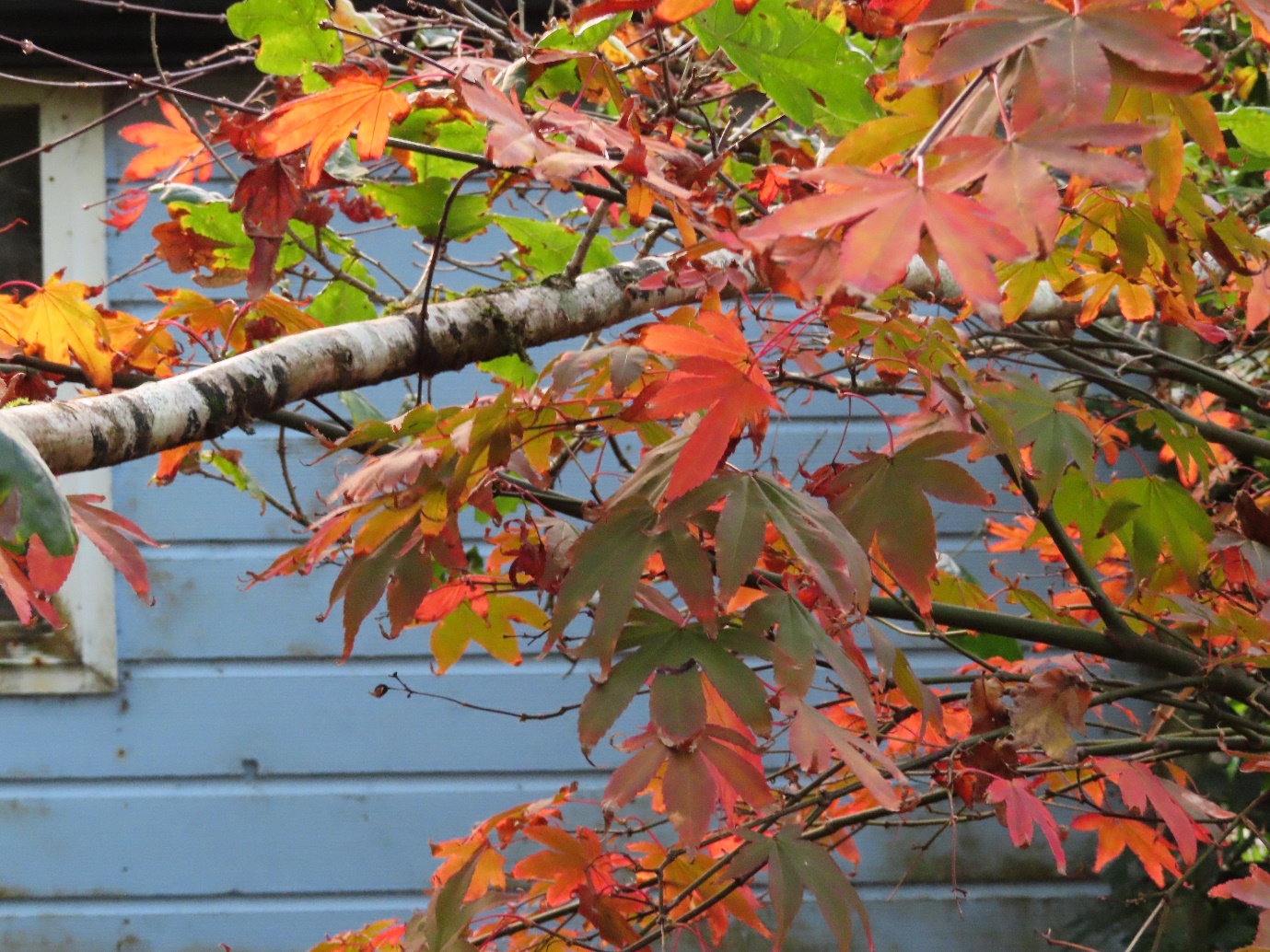 This acer was one of the plants that travelled around West Cork with me until I could find a permanent home. Once there I planted it in the only sheltered spot in the open garden. This was in front of a north wall, behind a shed and with an oak tree and camellia providing shelter to the east. It could not be happier. The only problem is that it is so sheltered and hidden that I forget about it until it produces its dramatic autumn display. Unlike many other of my plantings, it keeps its leaves for weeks. 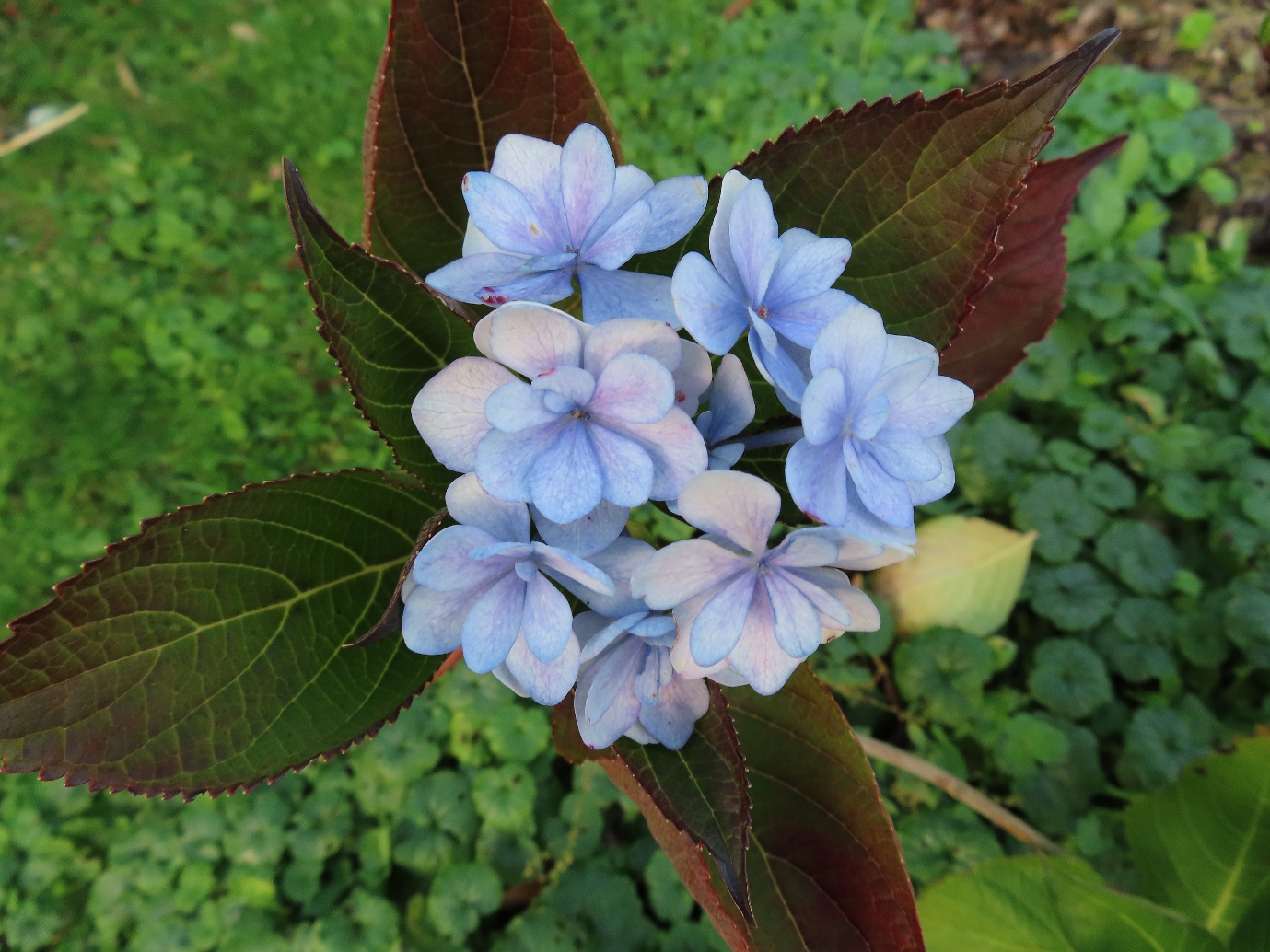 Despite the difficult summer, the hydrangea continue to produce beautiful single flowers allowing me to pick some for the house on a regular basis. 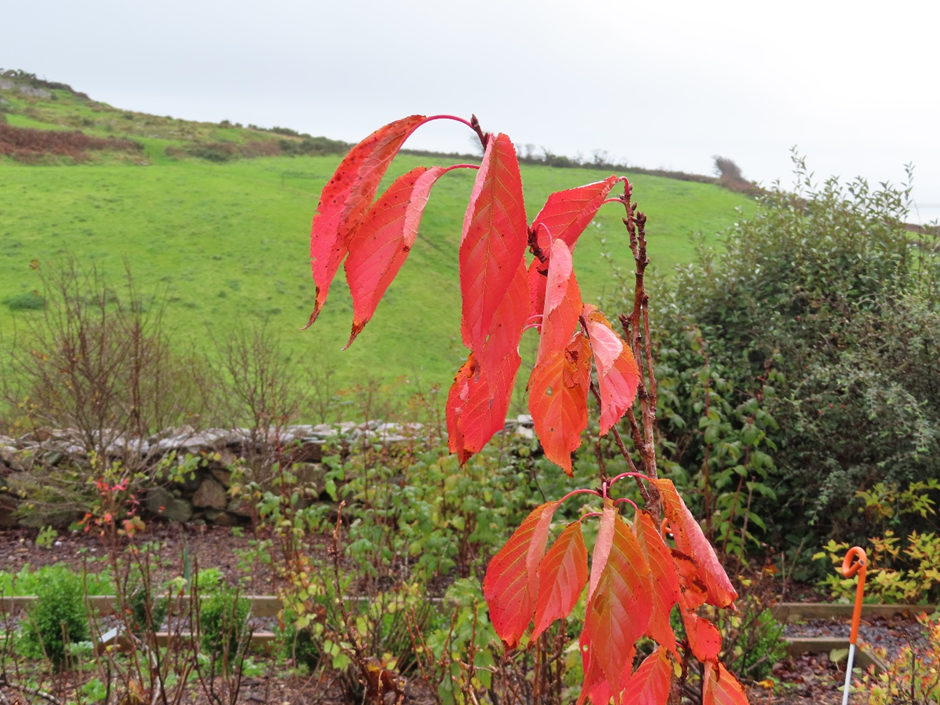 The ornamental cherry trees also produce dramatic foliage every year. Despite their exposure to the recent storms, they hung on to their leaves to the bitter end and this was the last to drop its leaves. I look forward to their displays as they mature over the years. 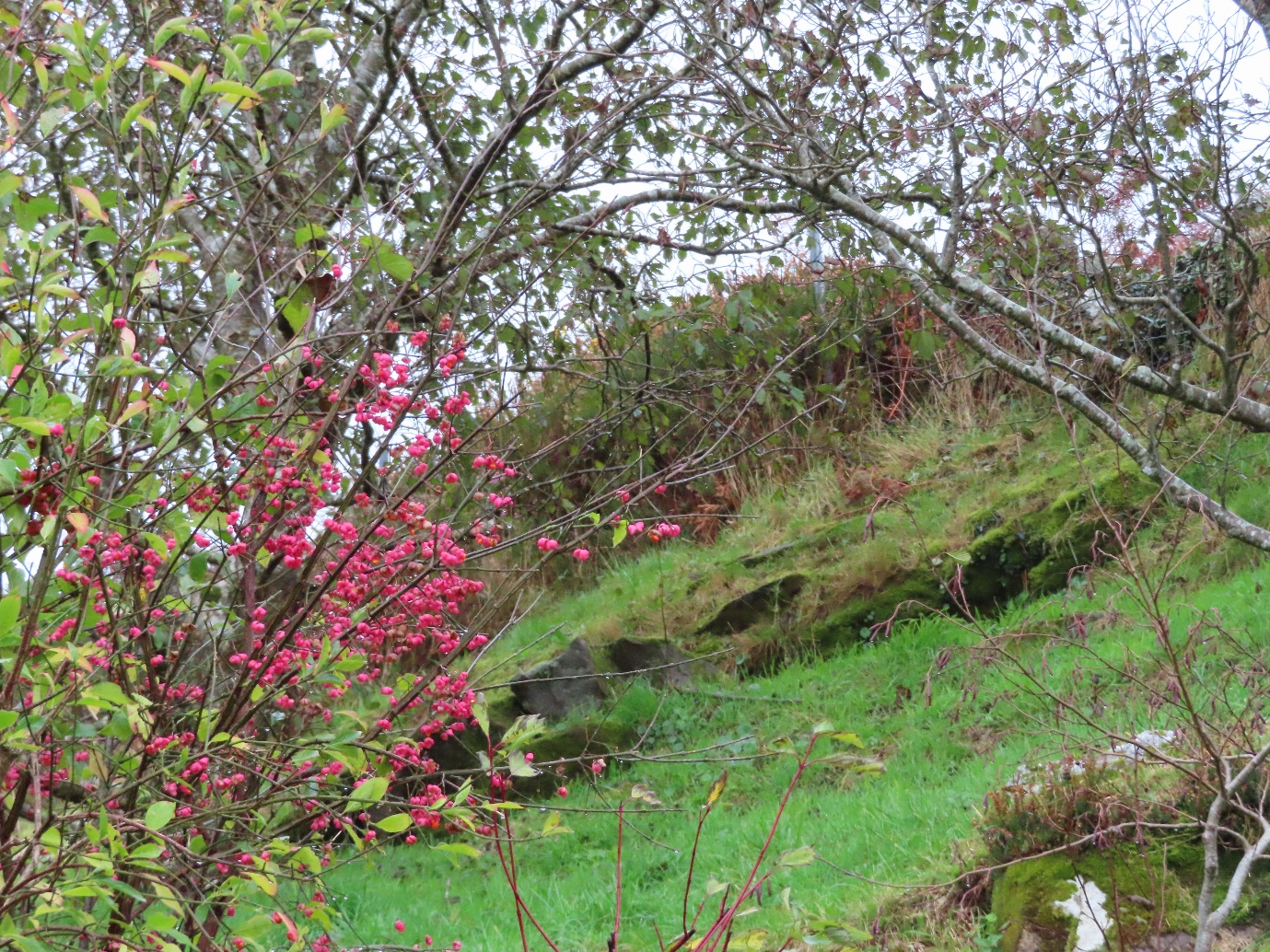 The spindle trees produce fruit that last well into November and are a favourite with the birds. This one only matured in the last week. It was stripped bare by the birds within two days despite the nearby bird feeders offering a selection of good quality seeds. Robins, goldfinches, chaffinches, thrushes, blackbirds, blue, great and long tailed tits, sparrows and three black caps all congregated in a very peaceful fashion and some also dined on the crab apples on the neighbouring Malus sylvestris. I am determined to find places for some extra plants in other parts of the garden. 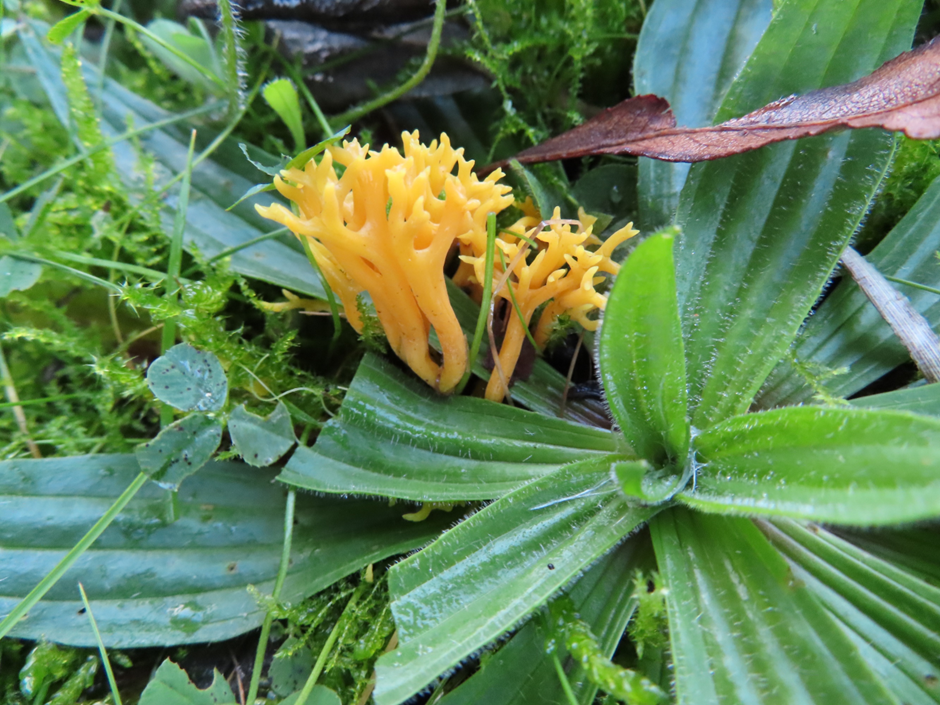 The hillside continues to produce more fungi some so small that they are just peeking out above the moss and are easy to miss. There are two similar plants growing quite close to each other and I suspect that one is a Meadow Coral and one a Yellow Staghorn. I only need a couple more years of study to distinguish between them. In the meantime, I am just happy to have them in the garden. 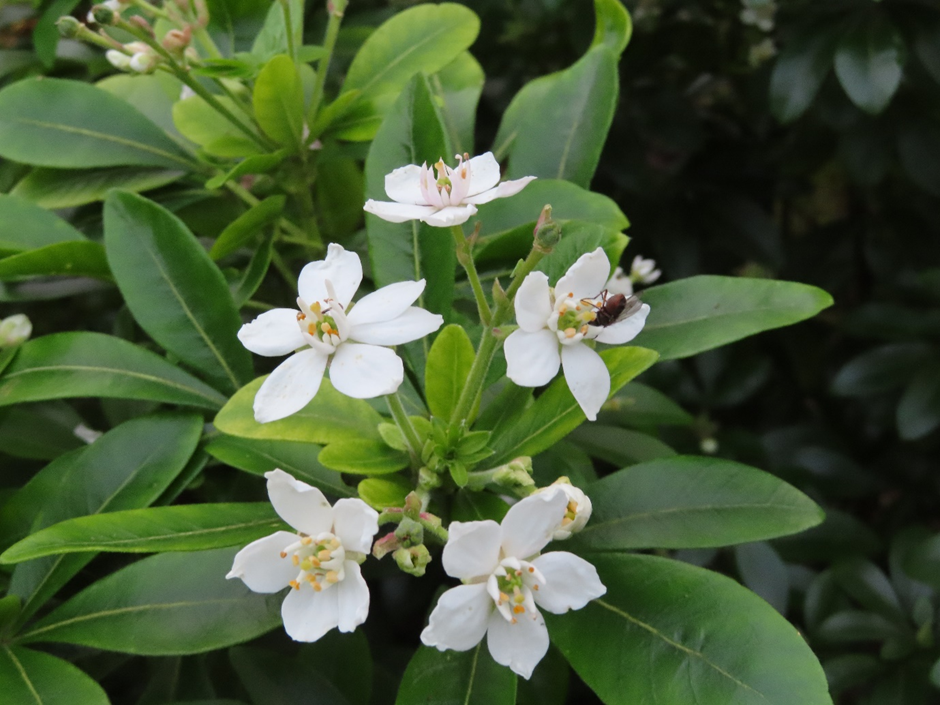 This shrub, Choisya Ternata, usually produces a second set of flowers in the autumn and this year was no exception. Sadly, it was just before a severe storm and they are now looking rather battered. 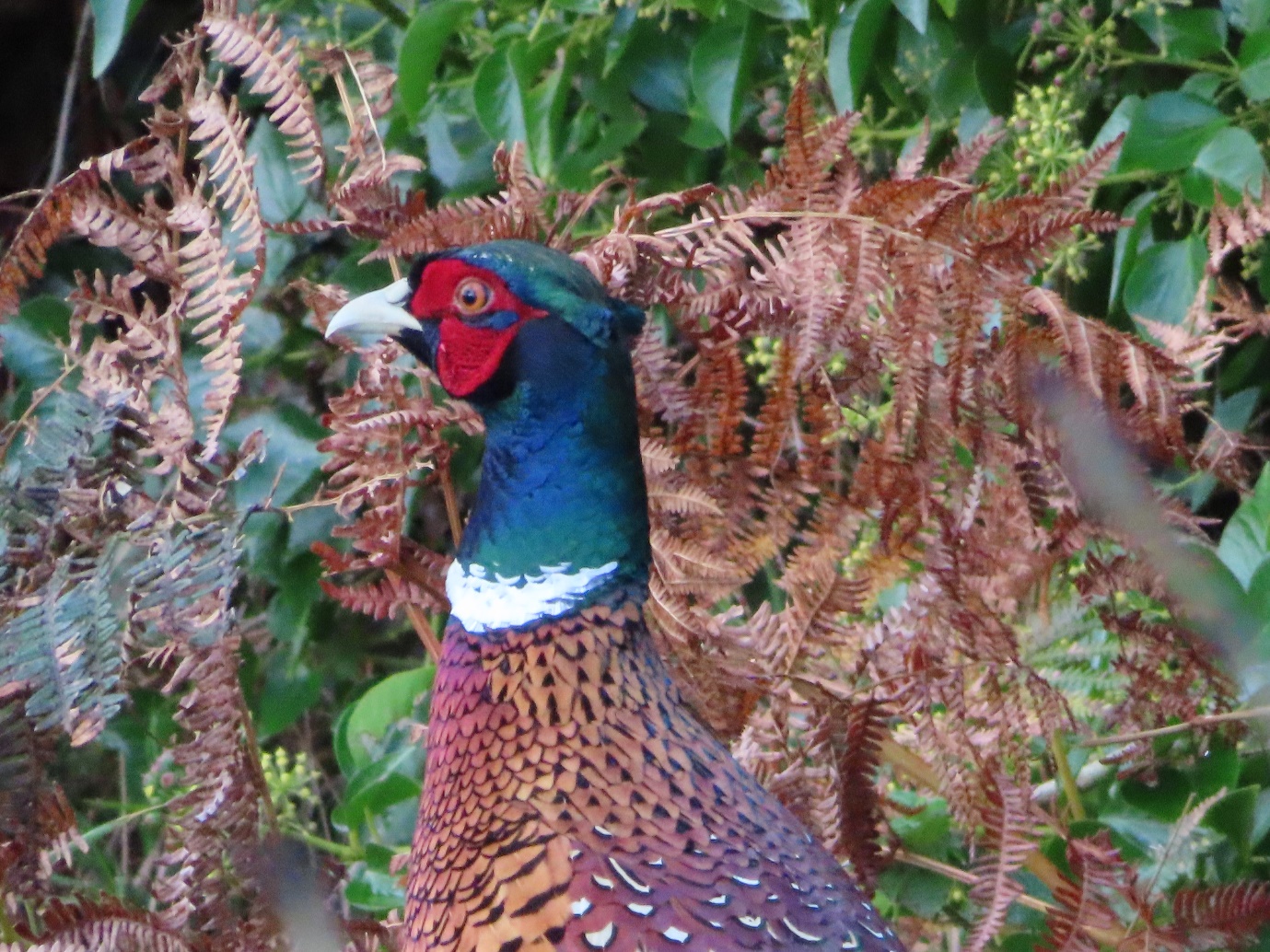 This lovely creature has spent the last few months at the bottom of my driveway. It gave me great pleasure to watch him saunter up the centre of the drive on the first day that I started to put our bird food. He has been joined by two or three females although they are much more skittish and scuttle off at the first sign of movement. There is another male on the east side of the garden where I have also placed bird feeders. What a perfect start to Winter.