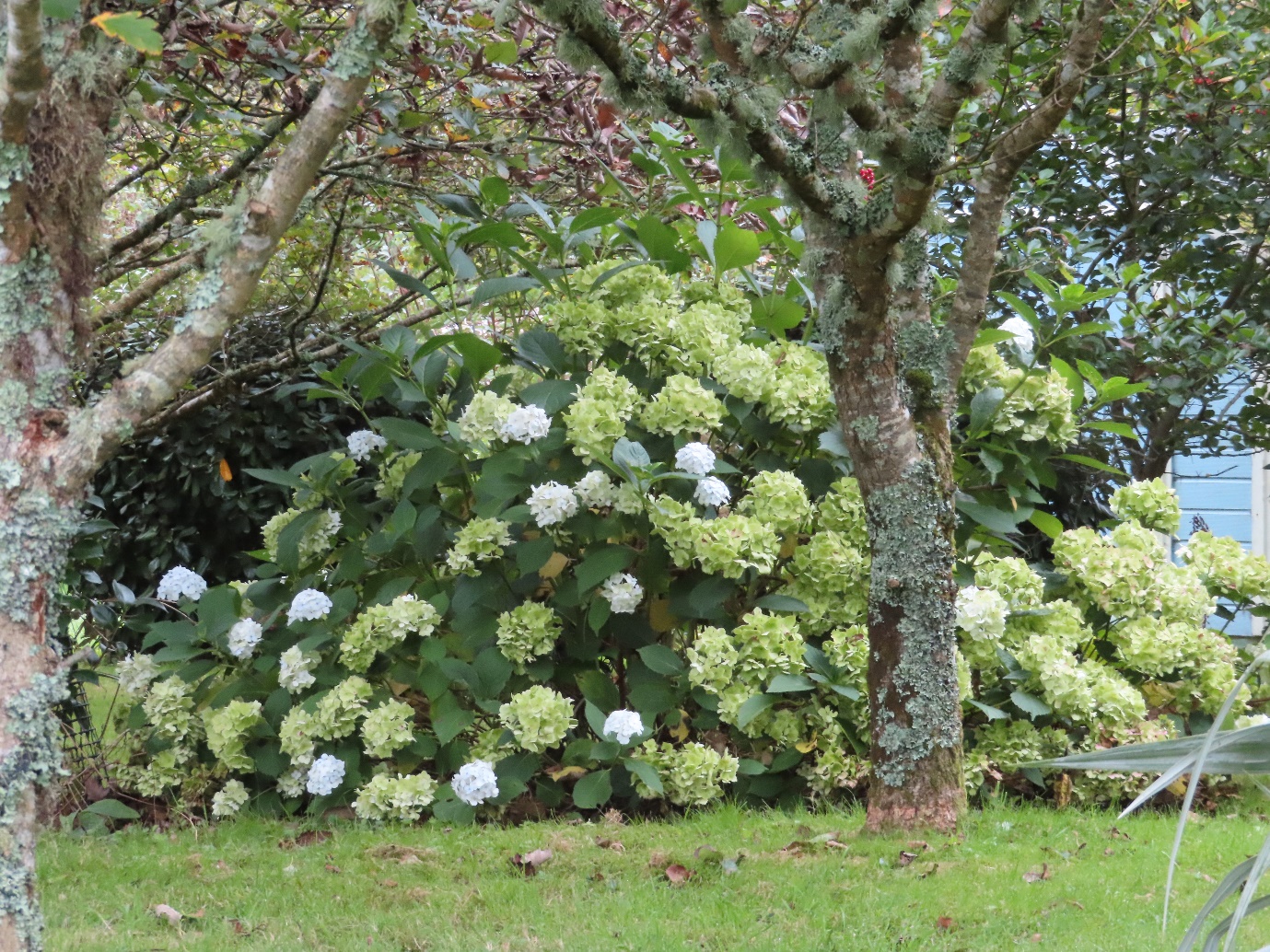 At last, we have had some rain and the garden is beginning to recover from the long hot summer. Even better I no longer have to lug gallons of water around the garden every evening. This hydrangea Madame Emile Moulier struggled in the dry weather despite growing in the shade and required careful nursing unlike some of its cousins growing in the direct sunlight. It is interesting to see that it has added at least eight inches to its height in the last two weeks. I love its shape when it is allowed to grow unimpeded by other shrubs. 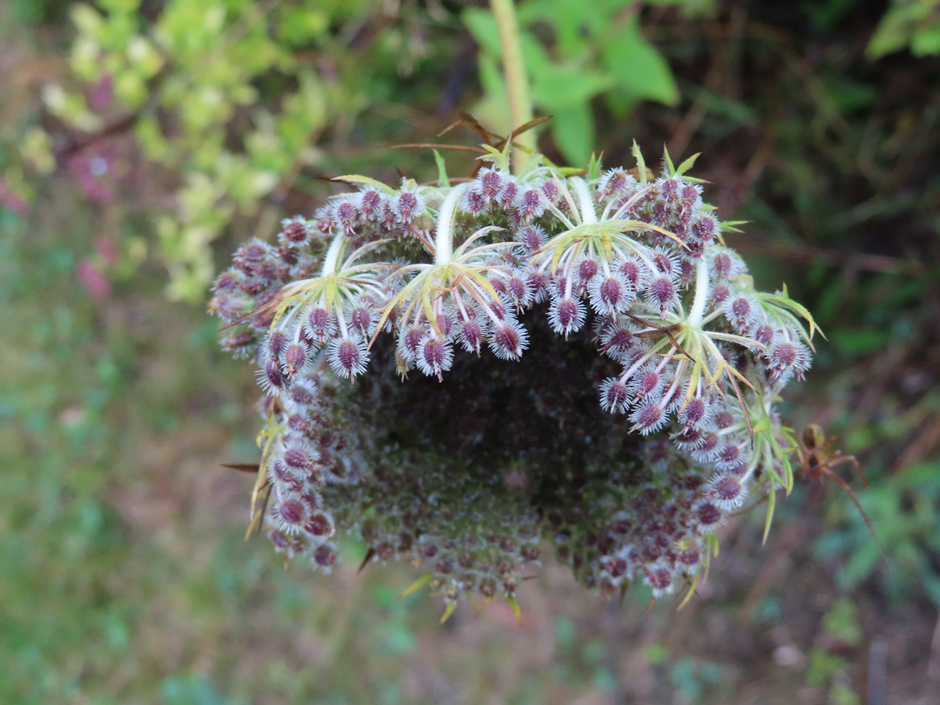 The seed head of a Sea Carrot

The unusually warm weather has returned and despite the rain my water butts are not full. Butterflies and ladybirds are still making occasional appearances and it is hard to believe that it is almost October. The most striking feature is the continued absence of any wind of consequence. Despite this, the leaves are falling and require clearing almost daily. The wild flowers are still producing colour and food so I still have not tidied the garden for winter. However, with a temperature of twenty degrees today winter seems very far away and I am glad to defer the ‘weeding’ for a few more weeks. 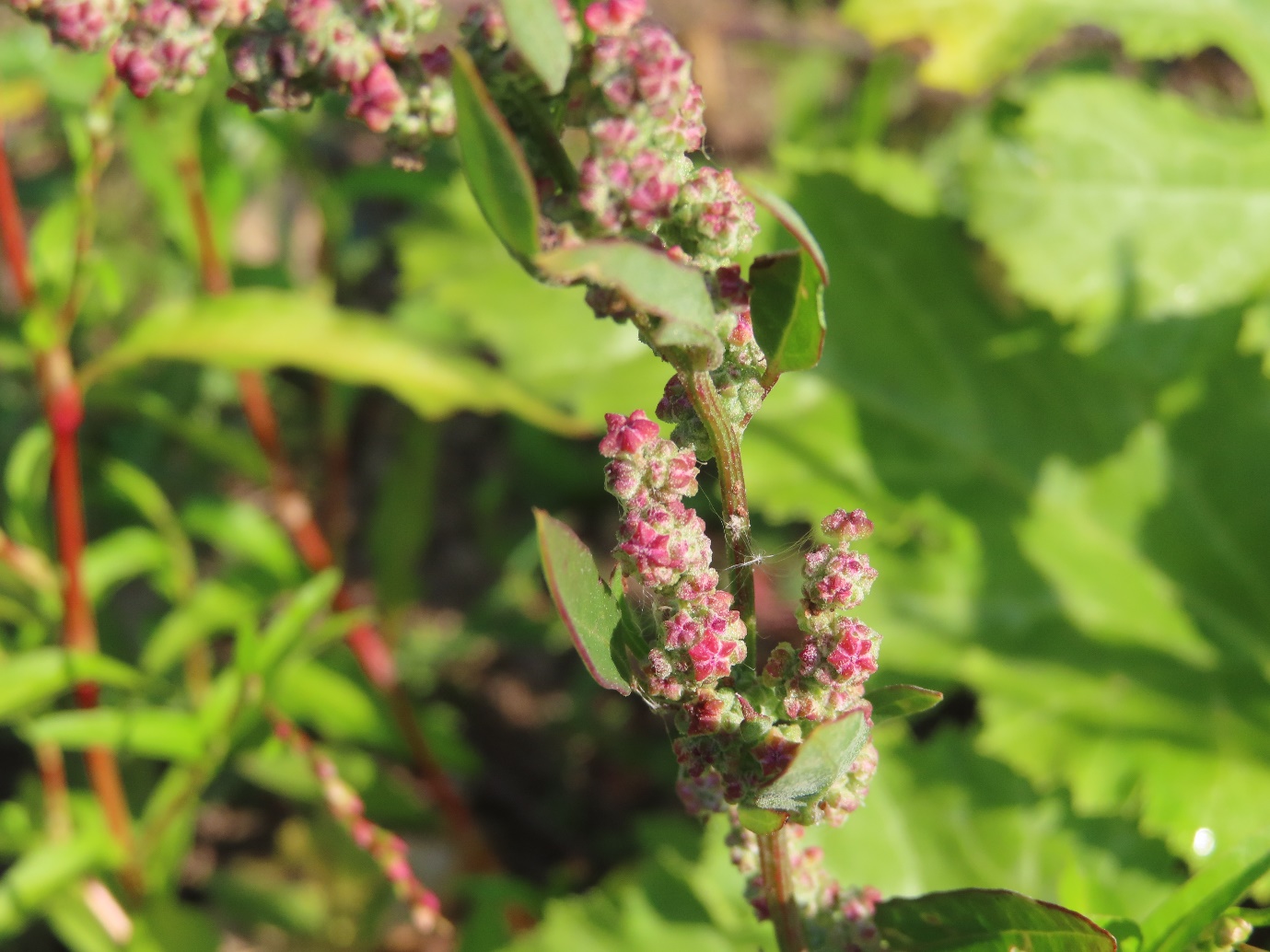 Apparently Fat Hen was once used as a substitute for Spinach. I don’t know where it got its rather derogatory name although it starts out as a rather insignificant spindly grey plant. However, if you persevere it produces these lovely deep pink flowers. That is if I have not mistaken it with Red Goosefoot, but as the former likes coastal areas and the latter dung heaps I don’t think so. 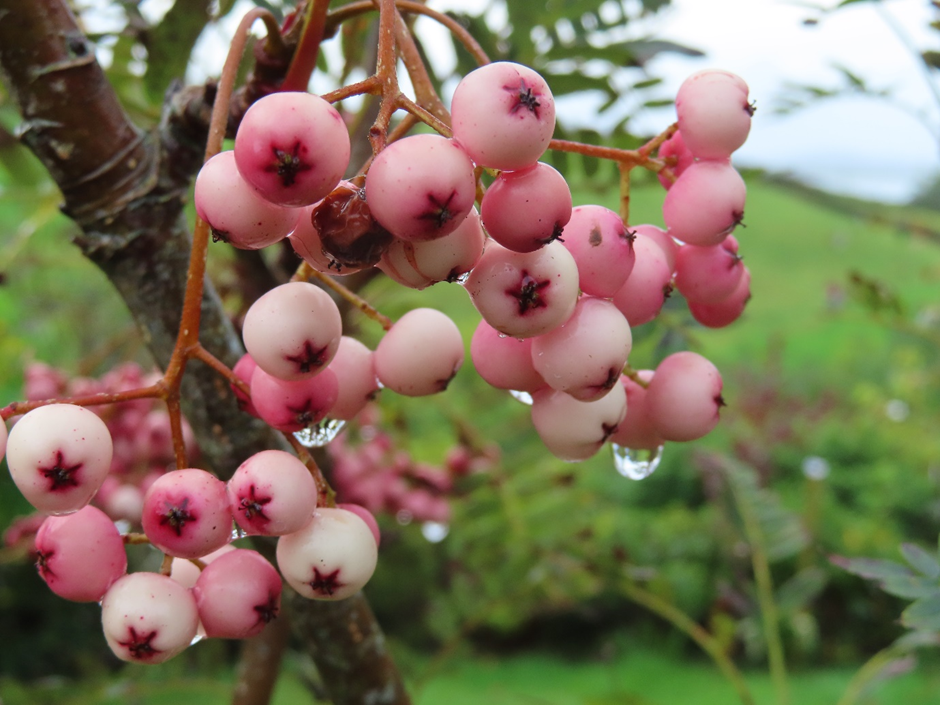 My years in Scotland have given me a great fondness for Rowan trees. Nothing can compare with their red autumn foliage partnered with the yellow leaves of the silver birch against the backdrop of the Cairngorm mountains covered in purple heather. Since ancient times the Rowan ‘Sorbus Aucuparia’ has been planted close to the home as it is a symbol of courage, wisdom and protection. I have followed the tradition in each garden that I have created. Sadly, they do not particularly like salt-laden winds and can look rather battered here. Despite this, the ‘Sorbus Alia Pratii’, which I bought from Future Forests in 2015, surpasses itself each year by producing these beautiful pink berries. 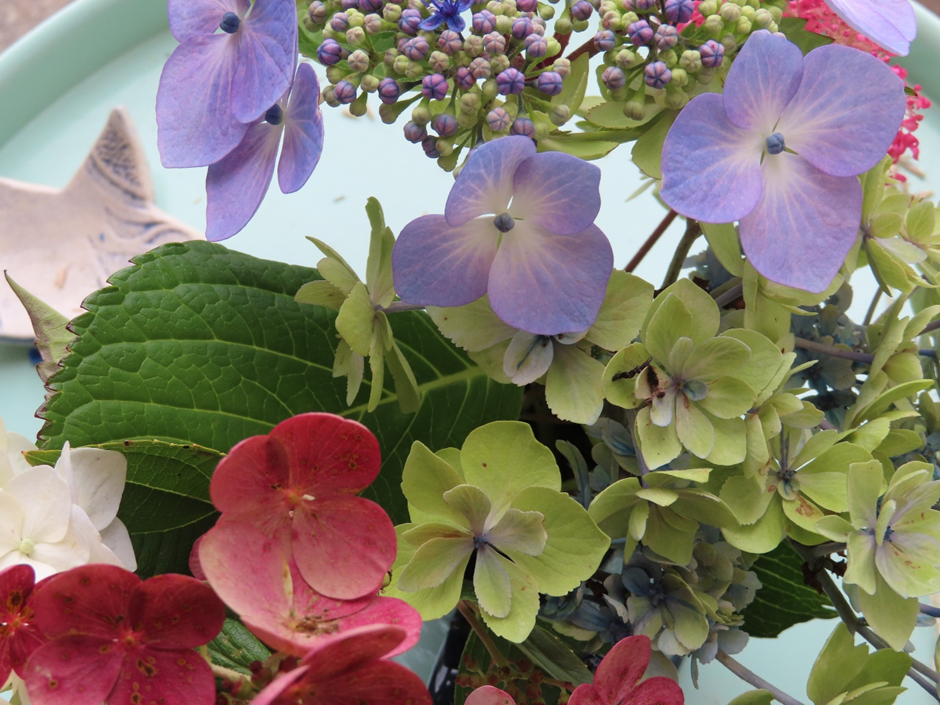 The hydrangea continue to provide colour despite the fact that the mophead varieties look very dry and burnt. 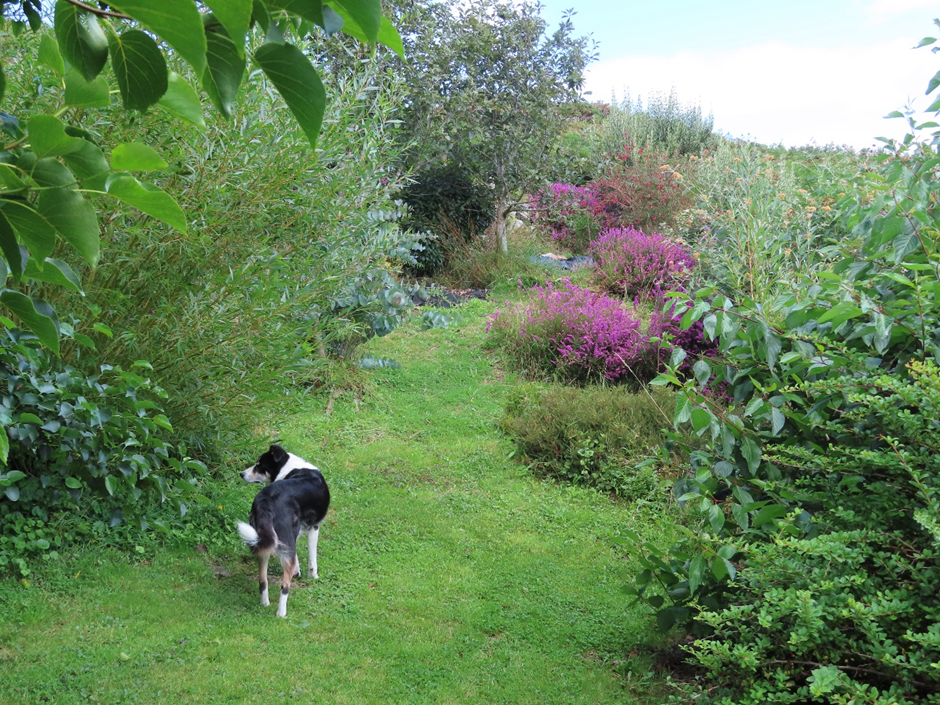 This is one of my favourite corners of the garden. It is tucked away in the north east of the property and is hidden by some large Italian Alders. It is a haven for bees and butterflies as it is sheltered, warm and quiet. What I most like about it is that it has refused to accept any of the plans that I have executed to ‘enhance’ the area. The heathers have all seeded themselves from those growing wild on the hillside to the north where willows, heathers and gorse live together in harmony. However, every one that I have tried to add to the collection has died. I have had some success with a hedgerow of Buddleia, Fuchsia and Rosa Rugosa to provide protection from the east winds and now leave the area alone to flourish without further, unhelpful intervention. 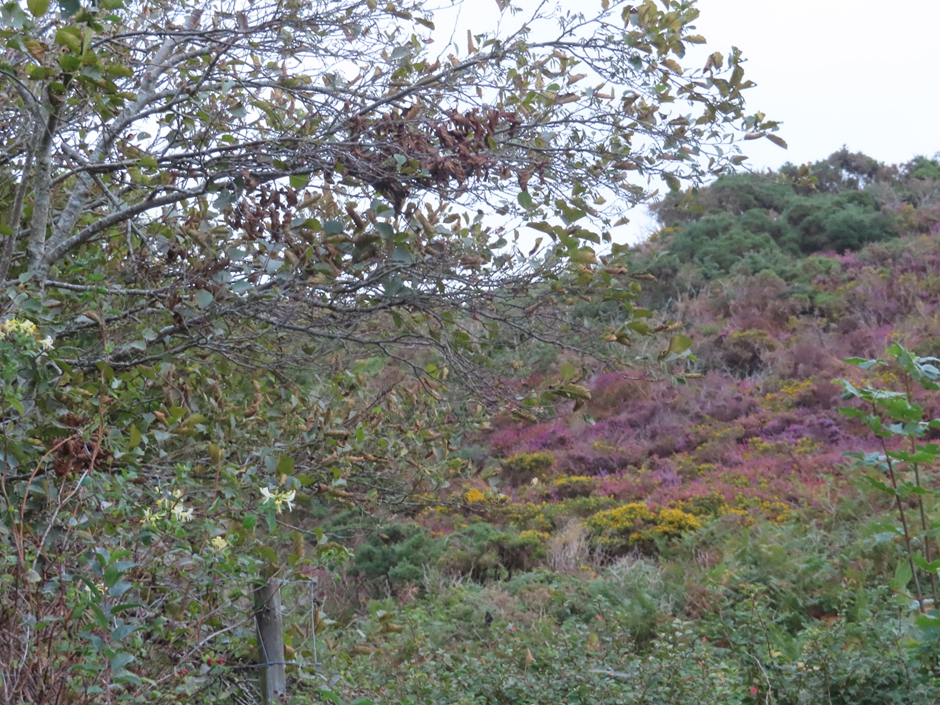 The hillside behind the secret garden where gorse, heather and willow grow together in harmony

The secret garden looked slightly different when I bought the property eleven years ago. There were six golden Salix Alba willow trees which added vibrant carmine colours in winter. I supplemented these with a eucalyptus to provide some contrast. All seven were torn out by the roots during the post-Darwin storm. I managed to rescue one willow and the eucalyptus by cutting them to the ground and covering at least some of the roots. Both are thriving despite the fact that most of their large roots remain exposed providing homes for a number of four-legged creatures. 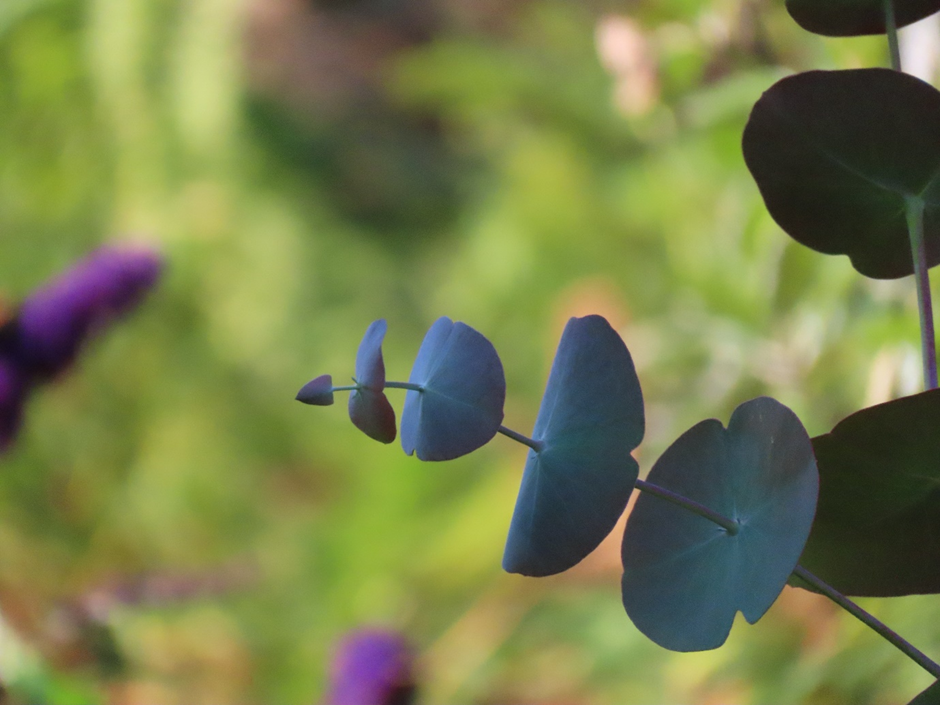 The eucalyptus produces small, delicate rounded leaves if cut back to the ground on a regular basis.

The prehistoric garden: before and after 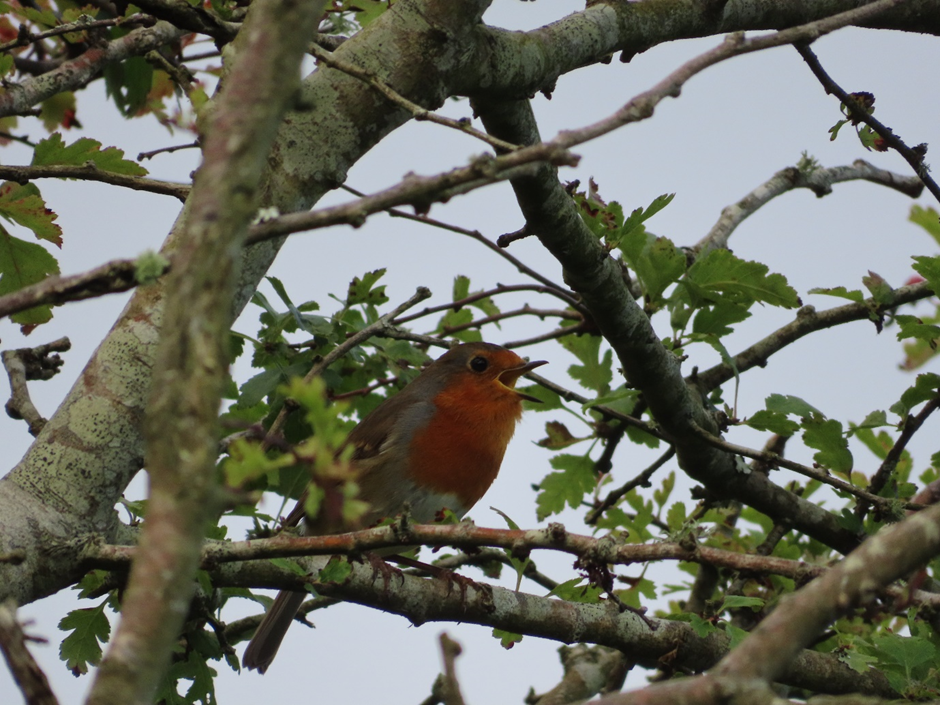 Now that the shrubs and trees are maturing near the house my morning outing with the dogs has taken on a new perspective. Dunnocks, Robins and Wrens seem to love the thick bushes that I have planted and now I can hear them singing just a few feet away from me as I amble about. They will often dart across my path as I pass and do not seem to be afraid of the close contact or of the dogs. So far there have been no fatalities, so maybe their confidence is justified. 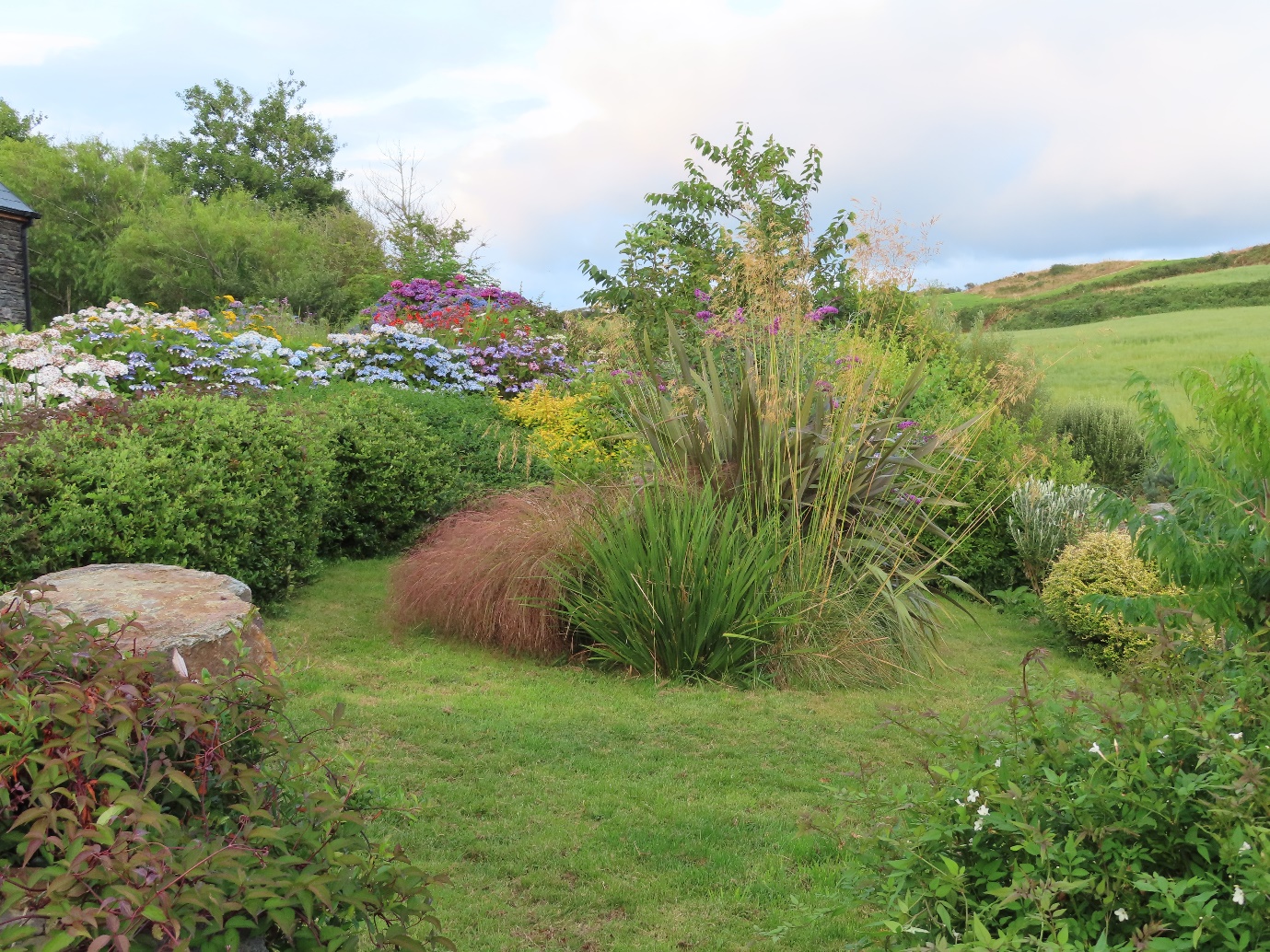 The prehistoric garden in 2021

Many years ago, I was introduced to the heritage ‘Pink Fir Apple’ potato in the North East of Scotland. It grew very well in the cold climate and I always had a good crop. I found it difficult to source this old variety when I first returned to Ireland but it is now readily available. I still think that it is the tastiest potato and it seems to love the conditions here. My autumn raspberries have also been a great success and produce a daily treat. Millie and I have come to an arrangement about these ( I say ‘arrangement’ not agreement as we have not discussed the matter). She gets all the raspberries that she can reach and I pick those at the top of the plants. She does cheat and I have seen her jumping to consume as much as possible above her head but as the crop is so good, we are both satisfied. I can’t say the same about the potatoes but as she has been stealing them for almost nine years despite my best efforts, I think that I need to take the same approach as I do to the secret garden and accept that there is little that I can do to change things. 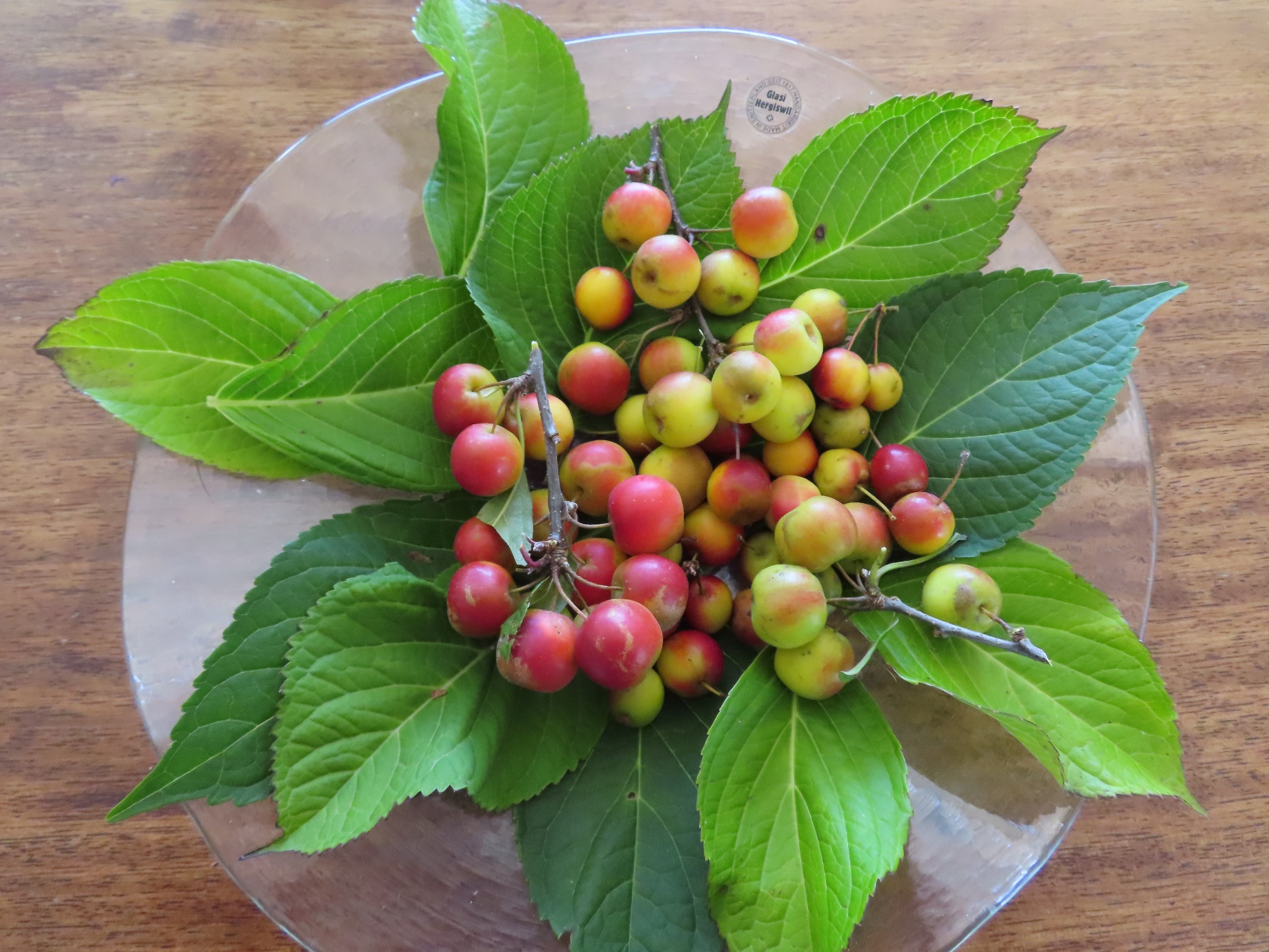 My crab apple trees survived the May storms and the dry summer but the crop is not as good as usual. The apples are hard and small and I don’t think there is enough rain to fill them out. I also think that the presence in the garden of two bull finches may explain why some trees have very few apples this year. So, no cordial this year, but the abundance of rosehips has made up for this deficit. 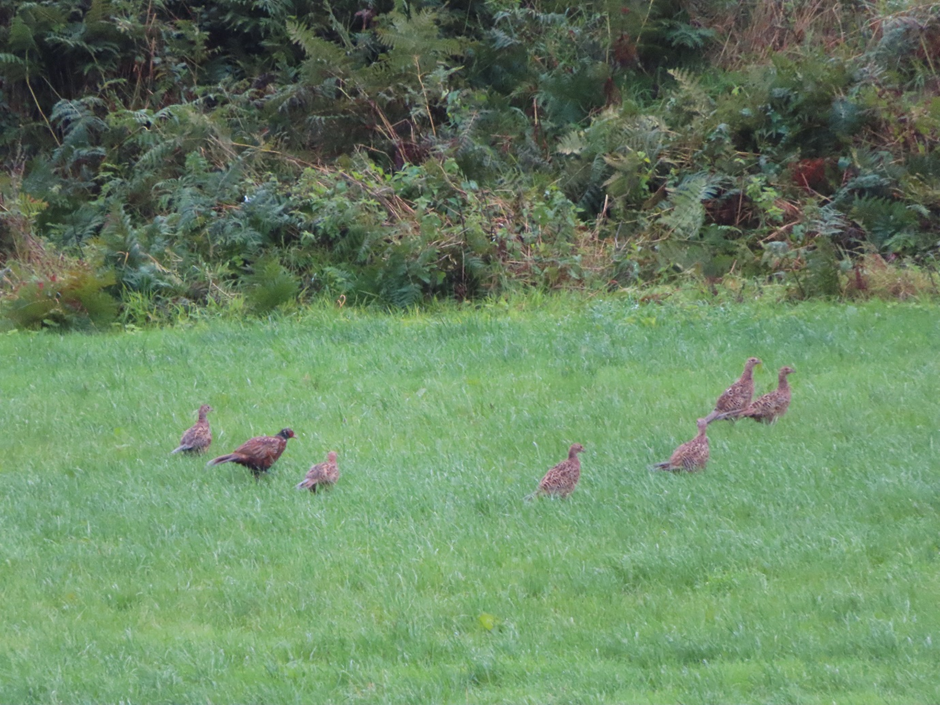 There is good news on the wildlife front. I always miss the call of the male pheasant in summer when the birds go to ground in the breeding season. I heard it for the first time in months on an early tour of the garden just few days ago. He was obviously keeping guard as his partner took the young brood out for perhaps their first outing. I counted at least seven female and one male chicks and it is gratifying that they all seemed to be fit and healthy. The photograph is poor as they had a short outing and then were shepherded back to the safety of the hedgerow by their mother. It is good to see that new life cycles go on in these difficult times.

One response to “An Indian Summer”