Roaringwater Bay, the tiny dot just above the top island on the left is the famous Fastnet lighthouse

W.B. Yeats wrote the famous lines – see blog title – in his poem Easter 1916 and they seem apt at the moment. It is hard to comprehend the changes that have taken place in our lives since I posted the last entry two weeks ago. The virus Covid-19 has shown that it does not discriminate and lives have been turned upside down throughout the world. As I have asthma I retreated to the house and garden very quickly and have only had a few trips out for essentials in the last three weeks. Living alone in the country you get used to your own company but I was very glad when my neighbour brought over 7 young heifers for their annual visit to my neighbouring fields. (I tell myself that it is the same seven animals every year so that I don’t have to think about what happens to them when they leave.) They and my three dogs are the only creatures that I speak to most days and they are excellent company.

My new companions for the summer. To date they have not responded when I talk to them but they do seem to be interested and attentive.

I am sure that I am not the only person with a large garden who lives in the country and who is keenly aware of how lucky we are in the current crisis when compared to those living in cities and especially in apartments. We can walk out of doors freely, sit in the sun when it is warm enough and grow our own vegetables if the crisis is long lasting. Personal distancing is easy as there are so few people about even at the best of times. It is a very busy time of the year in the garden so there is little time to mope. I am even further blessed as the small cove is less than two kilometres from my house so I can even swim when I feel like testing my nerves to the limit.

My problems are small and practical: I have no idea how I can get my broken lawn mower into my car as it is too heavy to lift on my own. Even if I do it is more than likely that the repair shop is closed indefinitely. Sourcing vegetable seeds and seedlings is also an issue. I usually buy some vegetable seedlings at the local market which is now closed and will now have to try other sources. My first attempt to buy on line was unsuccessful as all organic sites were temporarily closed because of the high demand. Obviously, everyone with even the smallest garden is planning to grow some food this year. I also had not bought my wooden stakes for my new raspberry canes and I am scouting the garden to see if there is something that I can use as an alternative form of support but without any luck so far. I am neither talented not creative in this area, so this will be one of my greatest challenges in the garden this year.

I do not have to worry about trying to buy fertiliser as I was able to collect a significant amount of seaweed after the winter storms. In addition, the nettles are starting to appear and it is very easy to make an all-round liquid fertiliser. As a result, they are one of the ‘weeds’ that I try to nourish whilst keeping them under control. I pick the young leaves as they appear and place them in a barrel of water. Once covered within a week you can either apply to the leaves or the base of a plant. I keep the barrel topped up throughout the summer and add nettle roots if the plants are starting to spread too much. Nettles also make a nourishing soup which I make with onions, black pepper and stock. They only need to be sautéed lightly to retain their bright green colour and I add some milk and cream after blending the mixture for the perfect final touch.

I am paying particular attention to my vegetable planting this year given the current crisis. At last the weather has improved and the ground is now dry enough to start planting my potatoes and onions. This year I am planting Orla and Pink Fir Apple potatoes. The latter is an old variety that has come back into favour and that I grew very successfully in the north east of Scotland. I think that they have the best flavour of all potatoes. They are waxy and therefore suitable for potato salad rather than roasting but I like them best steamed with just some butter and black pepper. Following my gardening weekend, I am determined to be more careful with my planting. This has meant taking a lot more time to prepare the ground and spacing properly. After my last post a kind friend sent me a photograph of some lovely willow hurdles. I have decided to make use of my willow weaving classes and have lined the plots with my first attempt at copying these. I have been using the prunings from my willow trees so it is a bit ‘rough’ looking but is great practice for the time when I can harvest my willow trees properly. 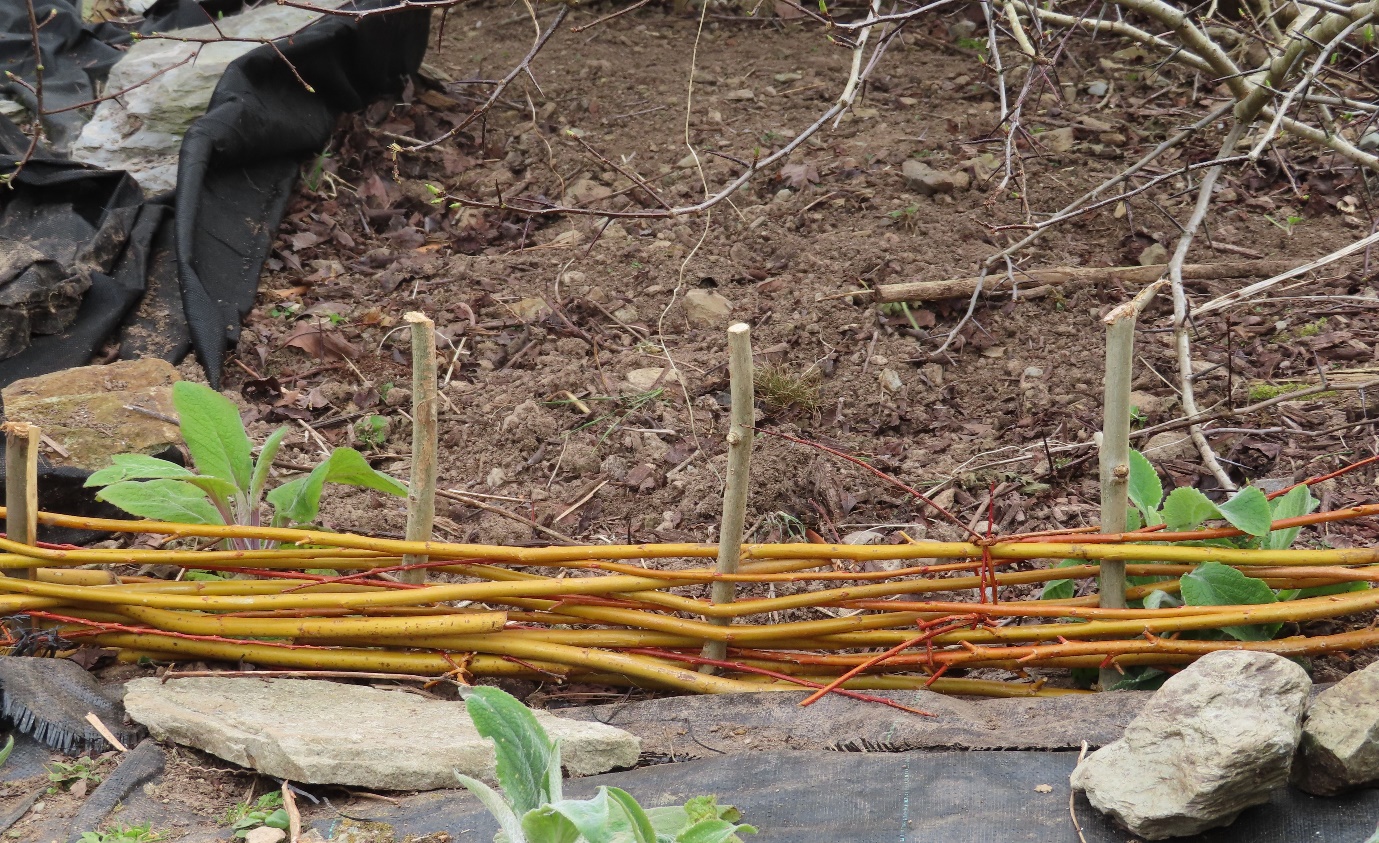 My attempt to create a small willow barrier based on a photograph and a YouTube lesson. I have cheated and tied in some of the canes but hope to improve with practice. The Salix Chermesina is a vibrant yellow and orange willow which is very flexible to work with and perfect for beginners like me.

Sometimes I seriously question what I am doing with vegetables (or why I am doing it). Planting my six Pink Fir Apple potatoes (a gift from a friend) took just a few minutes. Protecting them on the other hand took at least half an hour. I am not worried about rabbits in this instance but I am worried about my dog Millie. She is the canine equivalent of the ‘artful dodger’ and is the most intelligent and naughtiest dog I have ever had. This is a disastrous combination. Until last year she limited her potato thefts to the fully grow produce. However,  she has now taken to raiding the new potatoes as soon as they are sown. As I work, we both know that she has registered what I am doing and that her apparent ‘disinterest’ is just a ruse. As is her sudden interest in following me everywhere after the planting. However, I know her well enough by now to know and that she is just biding her time. Sometime during the day, she will disappear unnoticed to visit the potato bed to see what she can unearth. This means that as well as preparing the ground and planting the potatoes I also have to find a way to keep her away from them.

In the photo below you will see that I am using willow canes and tree branches as a barrier although I am not sure if they will be successful. Only time will tell. There is also the distinct possibility that these canes may take root so I will have to keep a close eye on them. All in all, I spend a lot of time erecting barriers against the rabbits, birds and my dogs. So much so that when it comes to slugs, I just admit defeat and hope for the best. 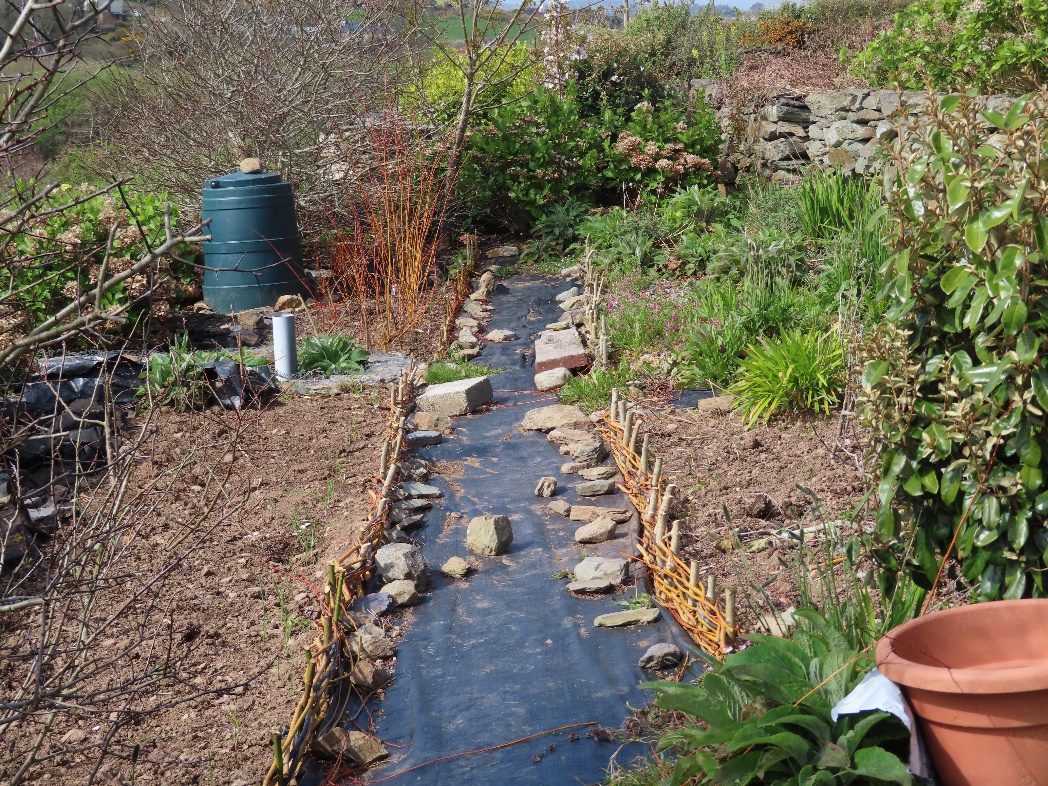 My attempts to create a tidy vegetable plot pale in comparison with the walled garden in Kylemore Abbey that I visited a few weeks ago. There vegetables and flowers were planted in beds in elaborate designs cut out from large lawns. These obviously require considerable labour to keep them neat and manicured. I have decided that my style of gardening will be ‘rustic’ rather than Victorian. 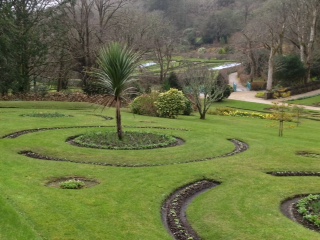 The formal, walled garden in Kylemore Abbey. I would hate to have to cut and edge the grass all six acres of it!

Despite the cold wind Spring seems to have finally arrived as has the first ladybird. The French lavender below has been flowering since last Summer and is also a favourite of bees. I hope to add these to other parts of the garden if it is possible to source any this year. 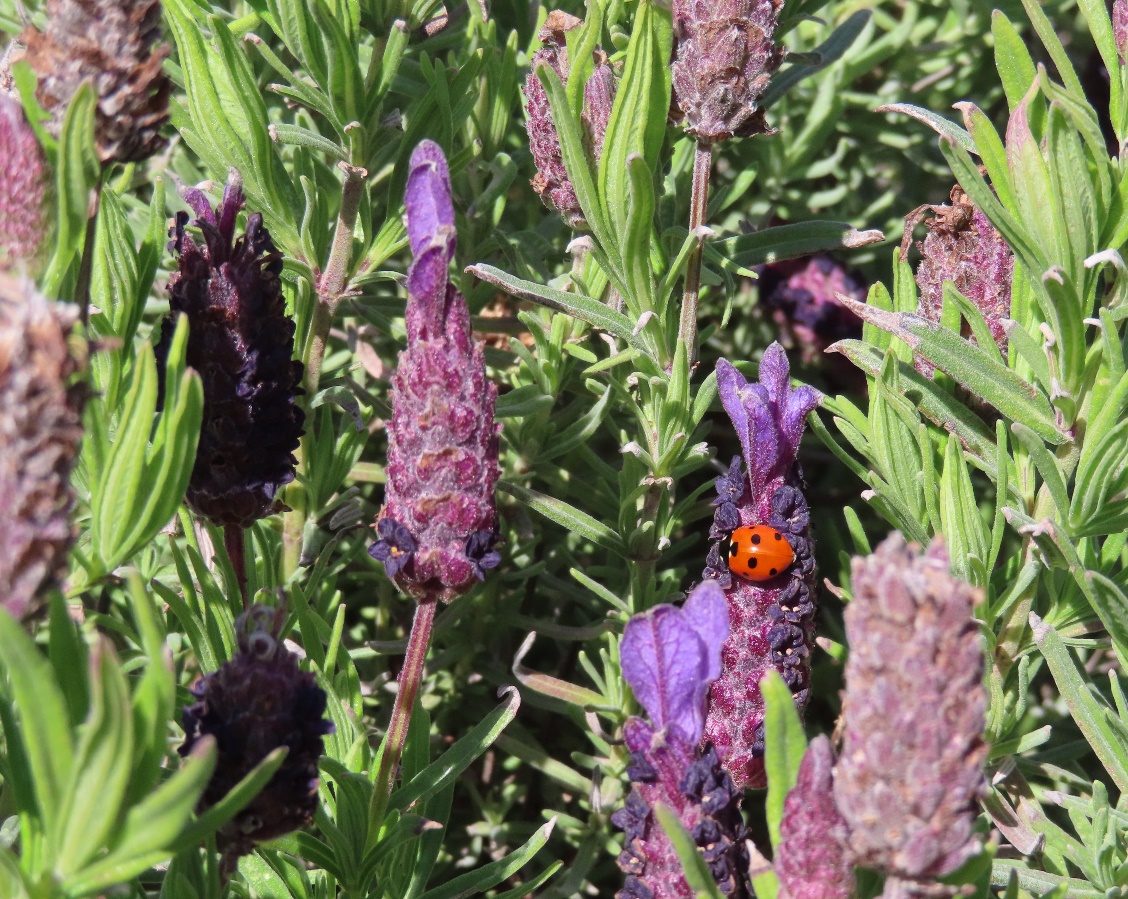 As each shrub starts to flower, I am amazed at their resilience. The flowering redcurrant and Forsythia in the photograph below have minimal protection from the stone wall to the south but have weathered the winter well and are covered in flowers. The red currant is particularly popular with the bees at present. 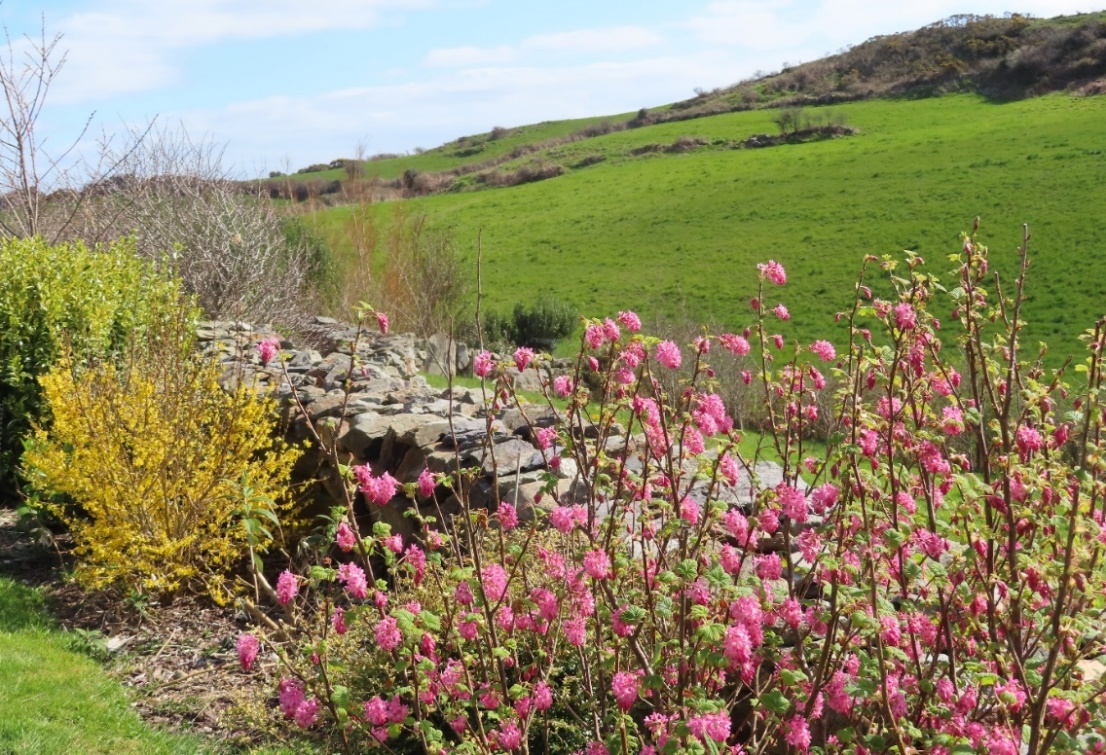 The wild flowers are starting to cover the garden and it looks as if it is going to be a particularly good year for at least some of them. When I bought the property there were a few primroses under one of the trees in the copse. Not only have they now spread throughout the area but they are growing in large clumps with over a hundred flowers in some of them. I am used to seeing them in small clusters and am not sure why they are so prolific here. 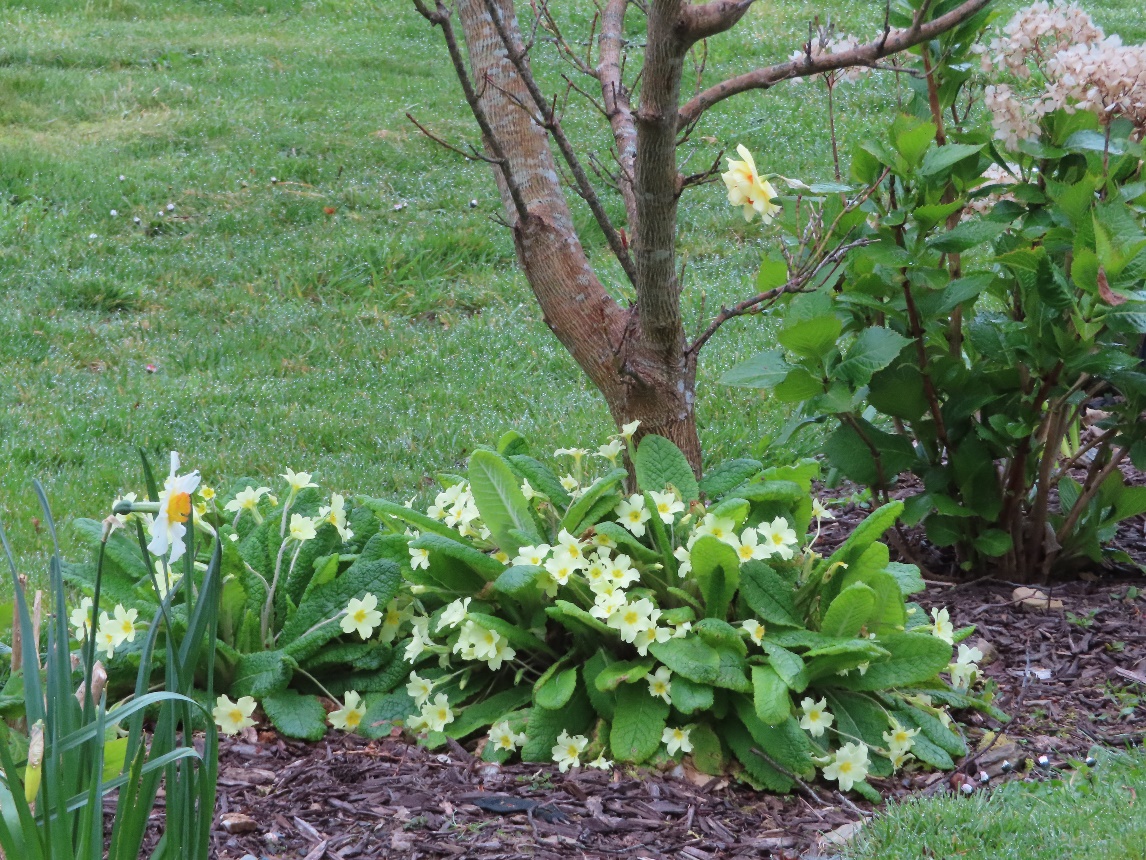 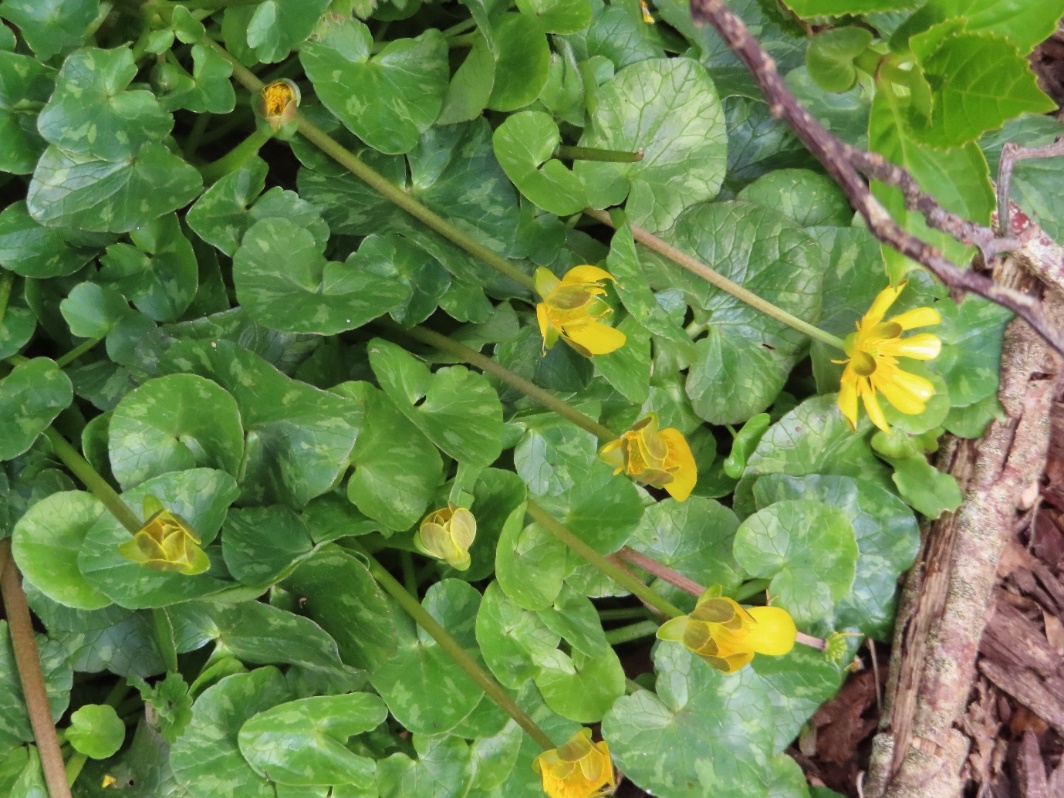 Lesser Celandine ‘Ficaria Verna’. This is a lovely wild flower with heart shaped leaves with pale blotches. The flowers are buttercup yellow inside and reddish orange on the outside. They love the shade and usually flower from February to May.

Sea Carrot, ‘Daucus Carota’ is a very beautiful wildflower as can be seen in the photograph below. The young flowers are delicate and pink whilst the mature flower forms a large white head. Apparently this flower is very rare occurring in just a few areas in England and Ireland and then usually only on dunes, cliffs and rocky shores. It is doing very well in my garden since I focused on encouraging wildflowers (ie leaving them alone) and it has further defied the experts by flowering in March (as opposed to June to September). I would have it growing all over the garden if I could. 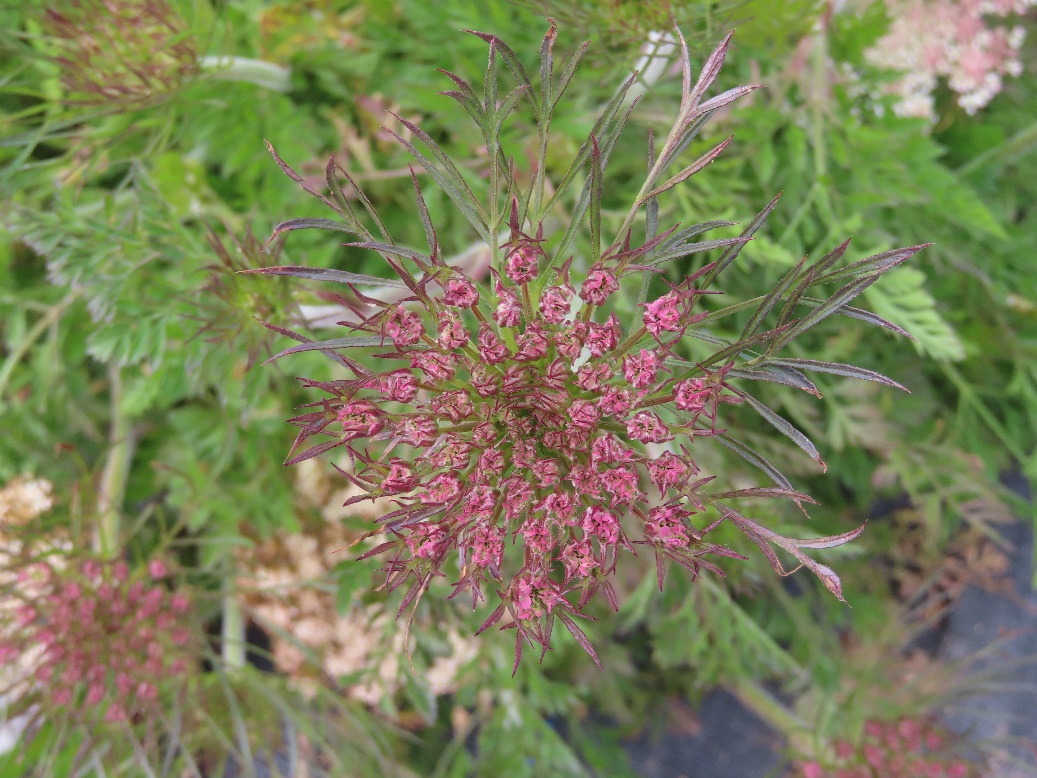 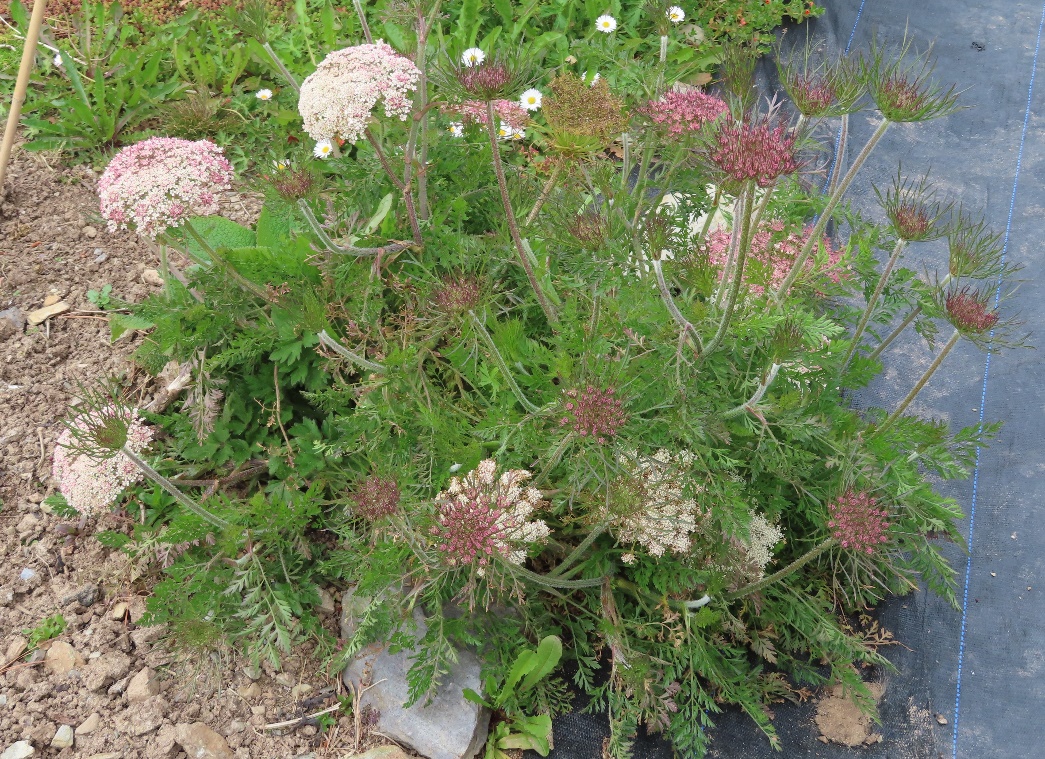 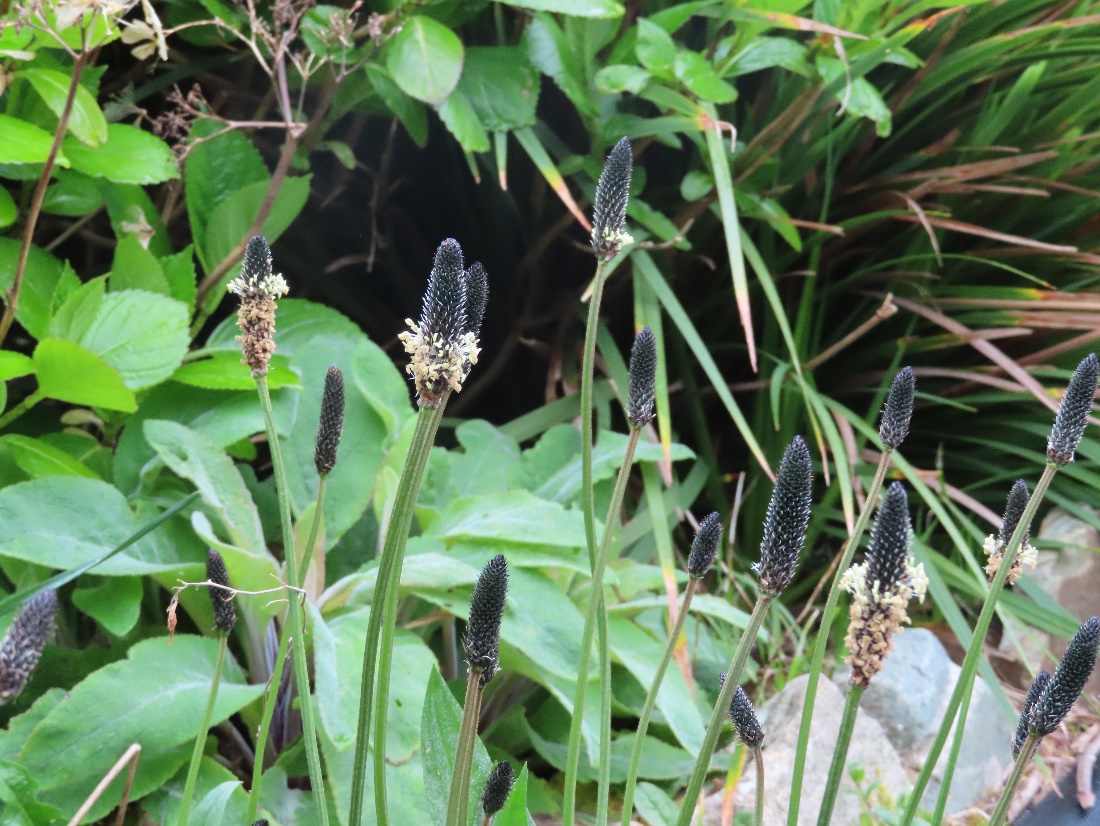 Ribwort Plantain ‘Plantago lanceolata’ Flowers here from April to October. I think of it as an architectural plant as its single stemmed flowers rise very gracefully from the long low ribbed leaves. It has very conveniently seeded itself along either side of the path into the potato patch so I have no need to provide an edging this year.

I have finally stopped feeding the birds and am delighted to see that my three female and two male pheasants have all survived the winter. Sadly, my Christmas tree has finally died but I feel privileged to have had Hawthorn leaves and flowers in the house for over three months during the winter.