A Storm
by Any Other Name 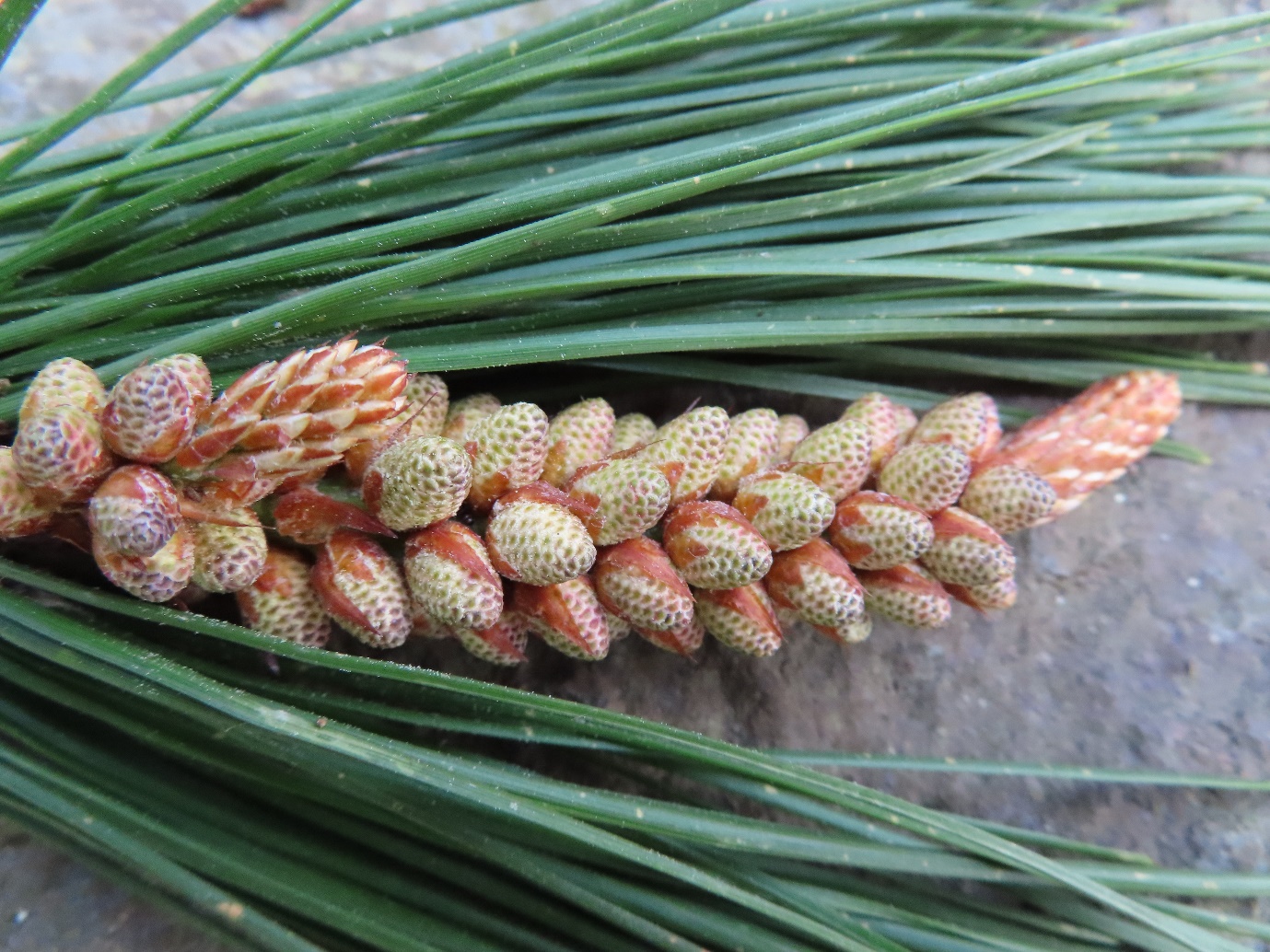 After weeks of some of the worst storms in decades it is both a relief and a surprise that this lovely young pine cone is one of the few casualties despite the trees being buffeted without a break during a week of storms. I am so pleased that I had them thinned out by professionals a few months ago as I suspect that the results would have not been so benign. The trees in the copse were also unscathed but I attribute this to the direction of the wind and the fact that storms Darwin and Ophelia wreaked havoc there some years ago and only the sturdiest trees survived. 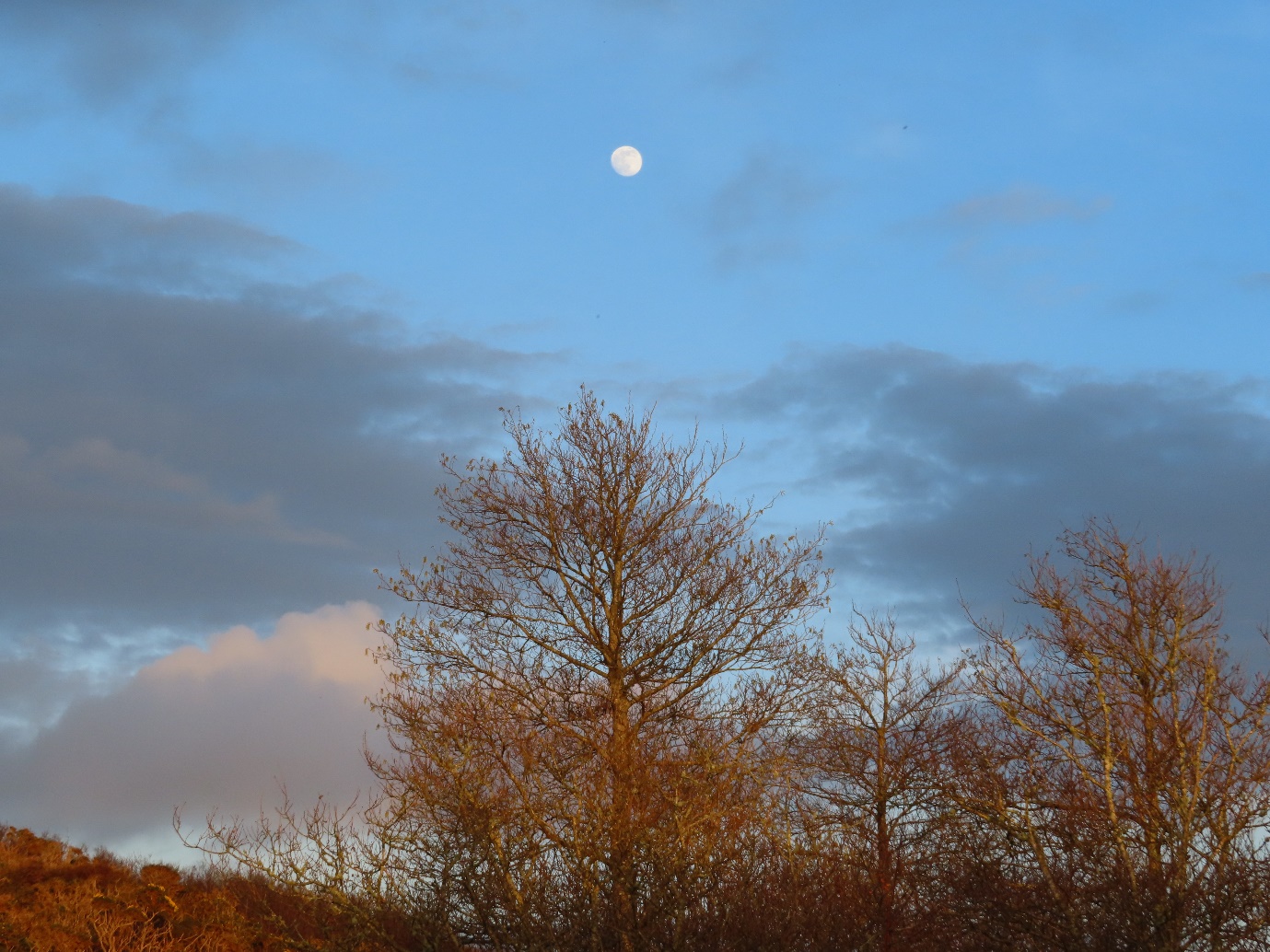 The calm before the storms.

I am very fond of the Italian alder and oak trees that populate the copse and wish I had room to plant more. Although they generally weather the storms one died last year. For two years it had to produce buds twice each spring and deal with unprecedented levels of salt. It was also the buffer for the rest of the trees in the area. I think that the salt-laden winds last year were the final straw. I have taken the opportunity to plant two more as replacements this year although it may be tempting fate. 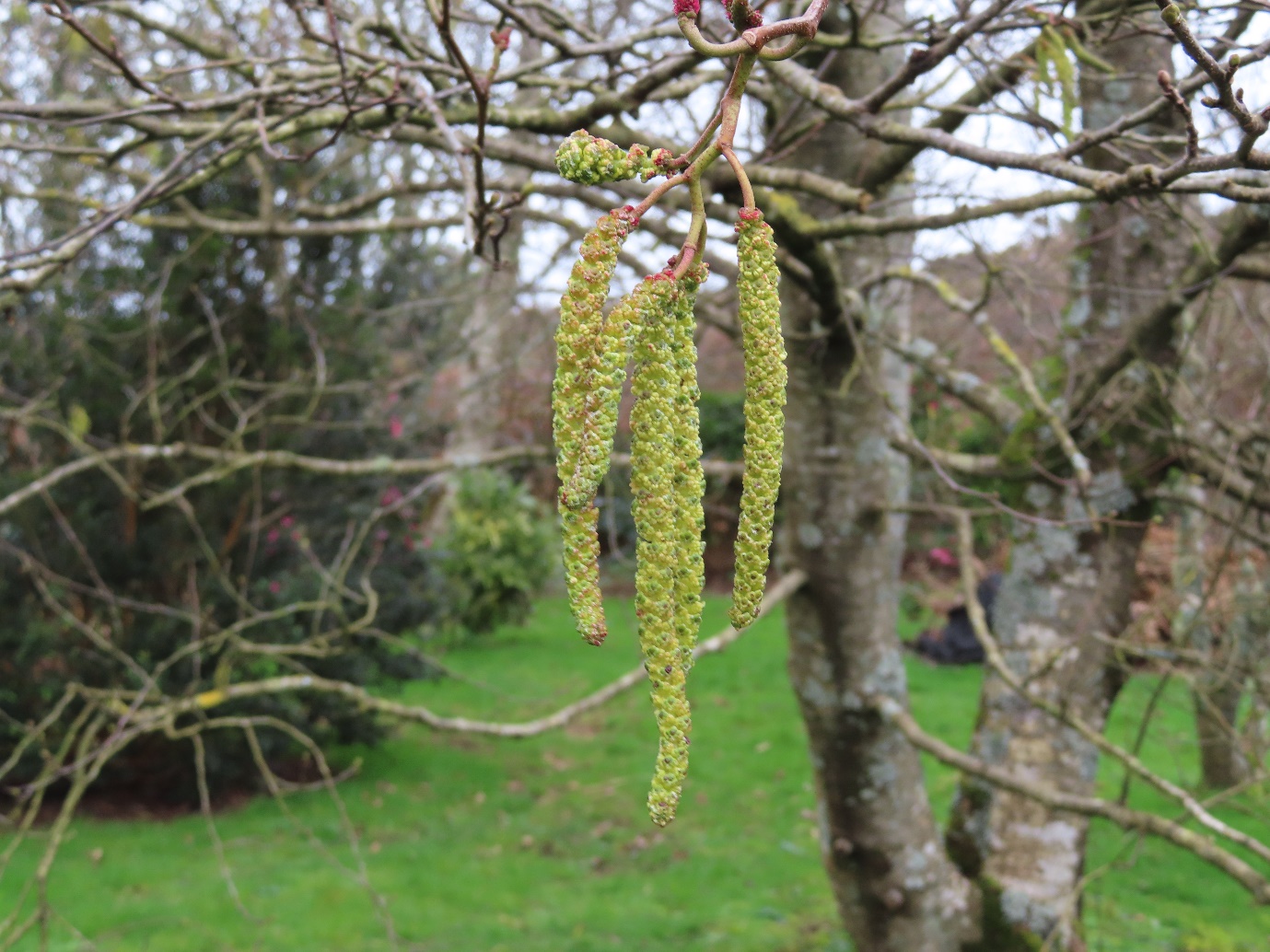 The lovely catkins on the Italian alder before storms Eunice, Franklin and arrived. Surprisingly they are still in place but now look rather battered. 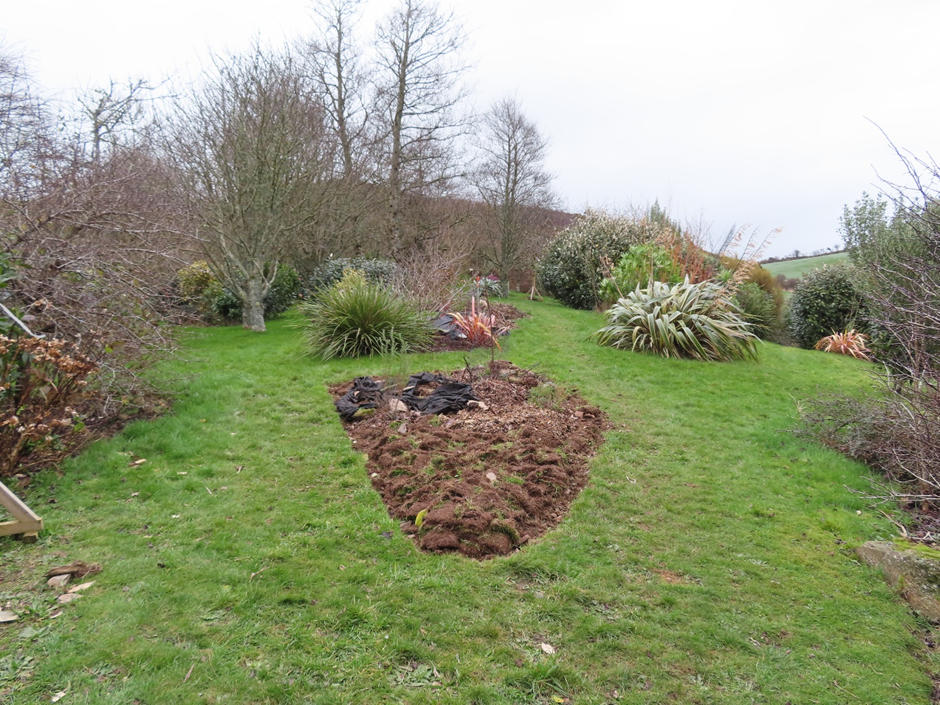 This is an area of the copse that was once full of pine and sycamore trees before they were felled in one day by hurricane force winds. It is amazing that any trees grow in the area as it is almost solid rock. I know because I have been preparing beds for my two new Italian Alders – with help I have to admit. And I am working on almost solid rock. However, I feel that if trees grew there before they can do so again. Apparently, the secret is to ensure that you break up the rock so that the roots of the trees can get a firm hold.

I have also added some shrubs to the area and, as usual, added used chicken pellets to improve the soil. These have always been a mixed blessing. They are very good nutritionally for plants but are also considered a delicacy by my three dogs. No matter what I do they spend their time digging round all new planting when I am not looking. The final straw came when I was creating the above new bed and found a new hebe sitting sadly by an excavated hole. While I suppose I should be grateful that the plant was unharmed I can’t compete with dogs that will lift a complete plant to get to the pellets and I have now given them all away (the pellets not the dogs!). The lesson? Clever collies and gardening don’t mix. 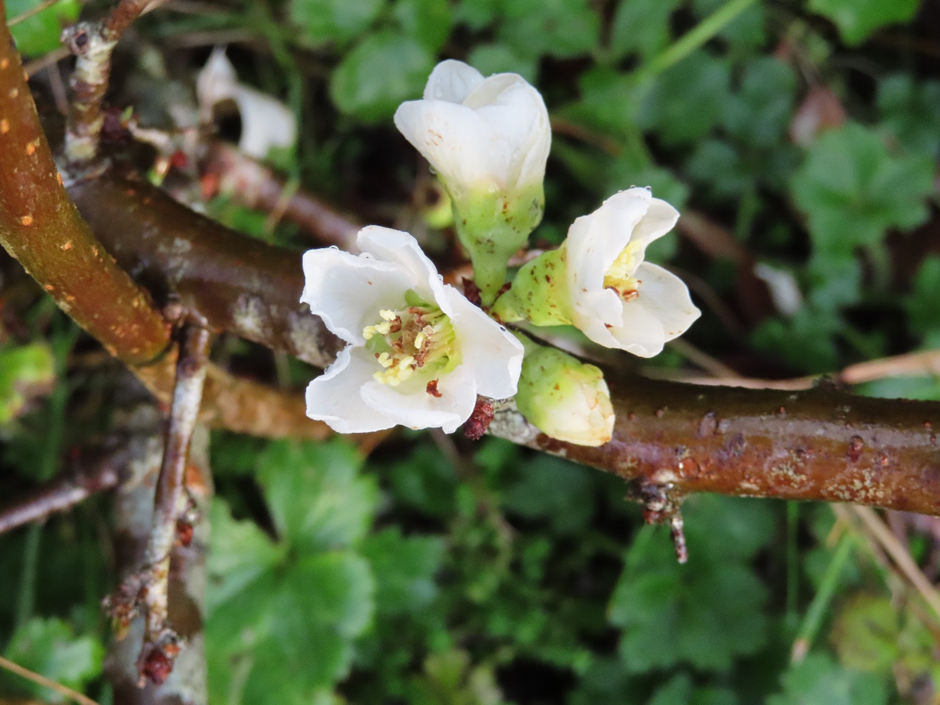 This quince and its red companion are managing to produce some flowers but are struggling in their current position which is too exposed to the south west winds. Finding a suitable position will be a challenge but I would hate to see them die as they are another pleasant reminder of my childhood garden. 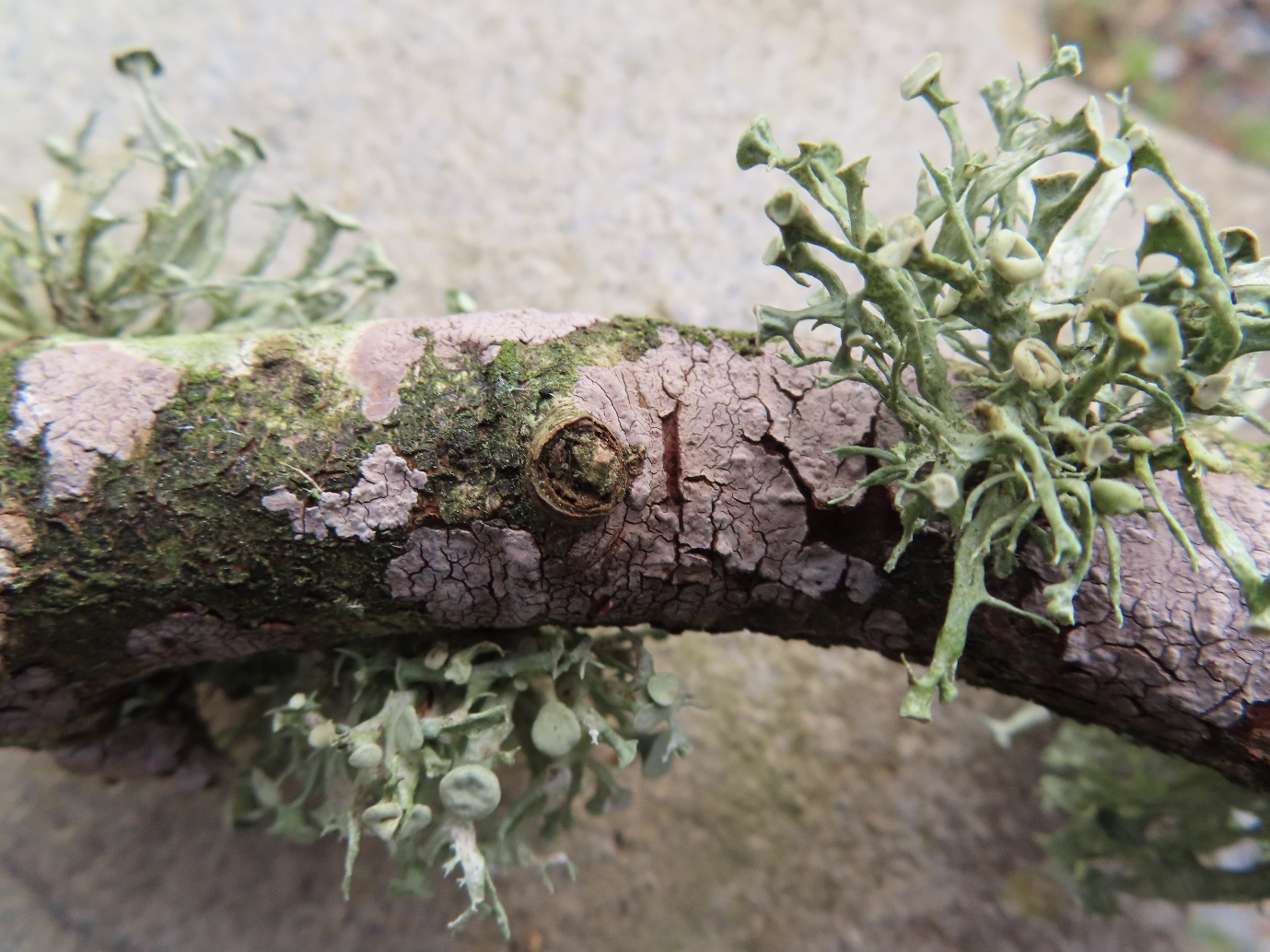 I have been trimming some of the high branches in the copse and came across this lovely salmon pink fungus or lichen. I have never seen anything like it before and I am having difficulty identifying it. So far, the only similar photograph I have comes from the west coast of America with no name attached. 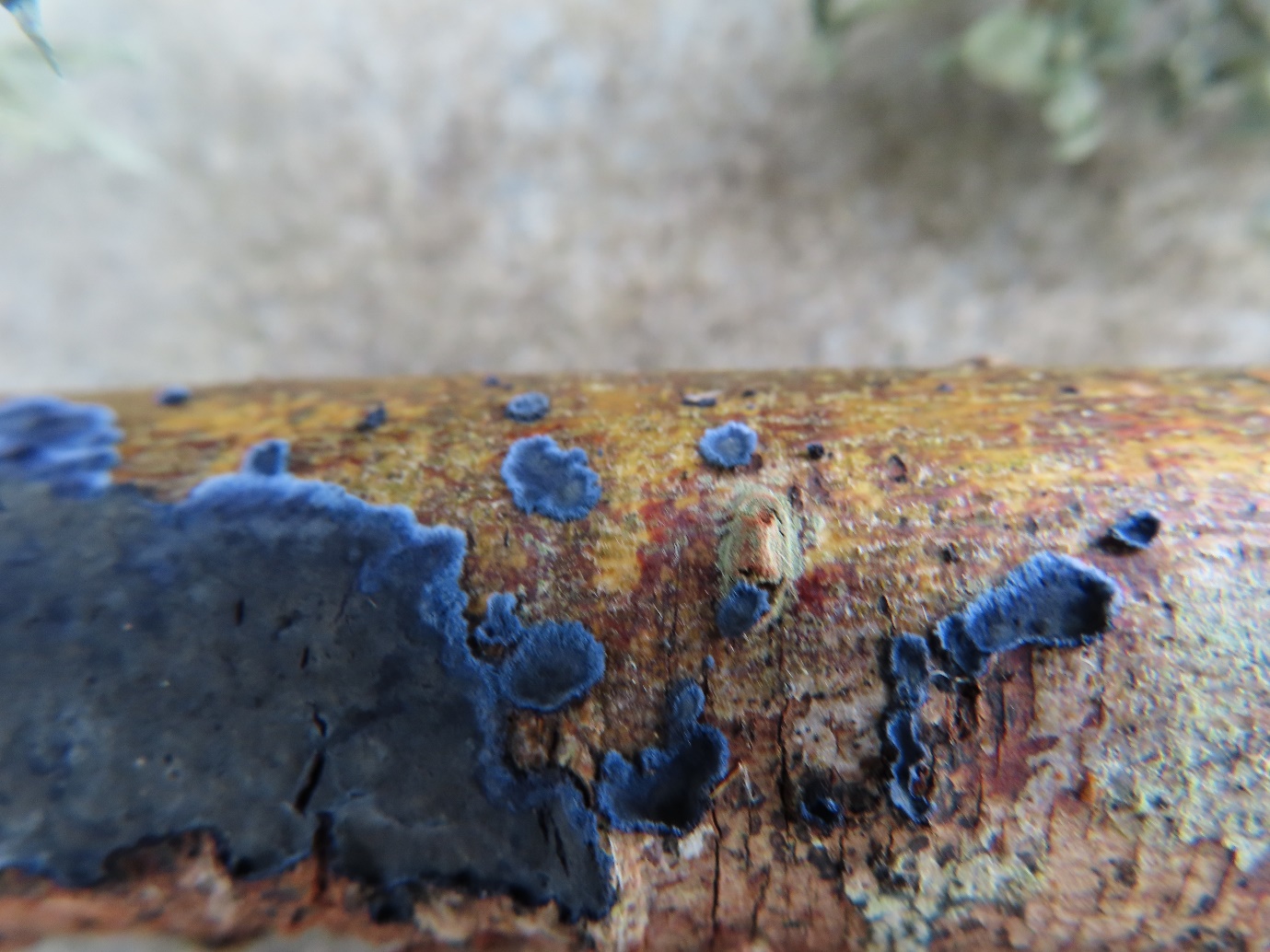 On the other hand, I believe that I have identified this very beautiful fungus growing on a dead willow branch. I think it is a Cobalt Crust Fungus and the colour ranges from a deep blue/black to a powder blue. Together these new additions make a beautiful picture and I hope they remain in the garden. 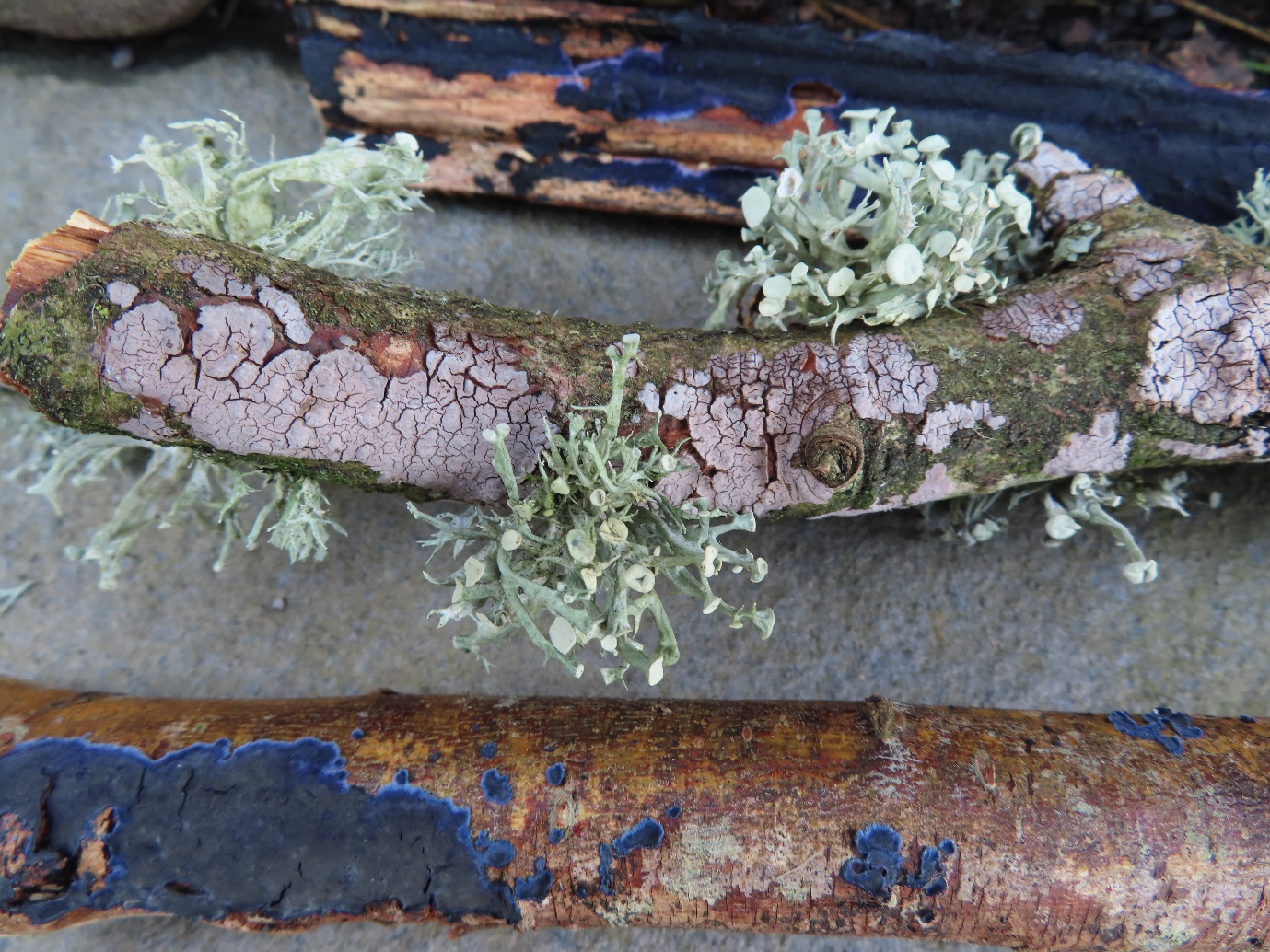 Other more traditional mushrooms are continuing to appear and the common inkcap has made its sixth appearance in the same position this season. It is eaten as quickly as it appears, so I presume that there are some hungry creatures around. These lovely yellow ones below were growing close to the Cobalt Crust Fungus. I never thought that lichen and fungi could be so colourful and can live with the fact that they are so difficult to identify without a PhD in the subject. 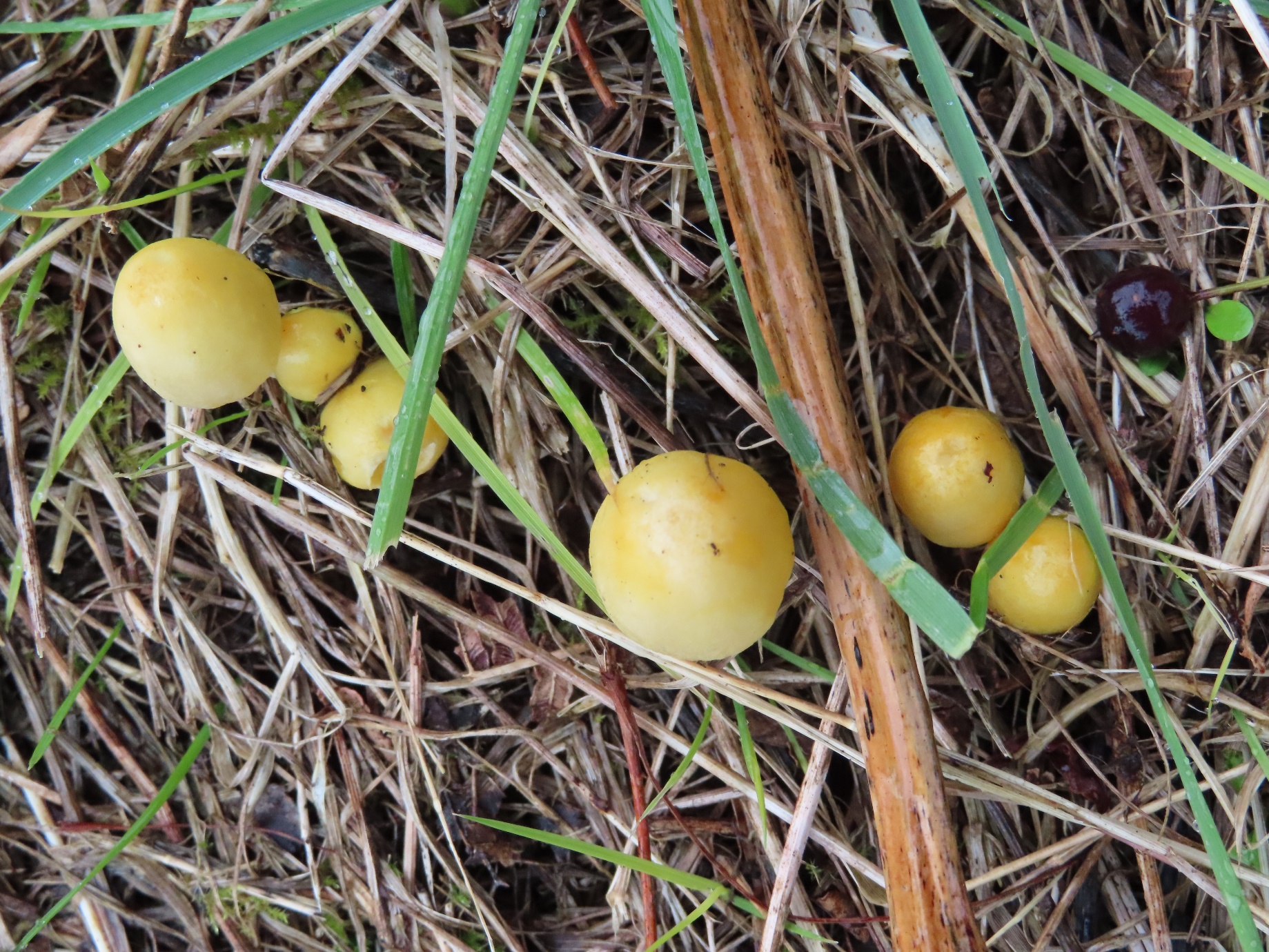 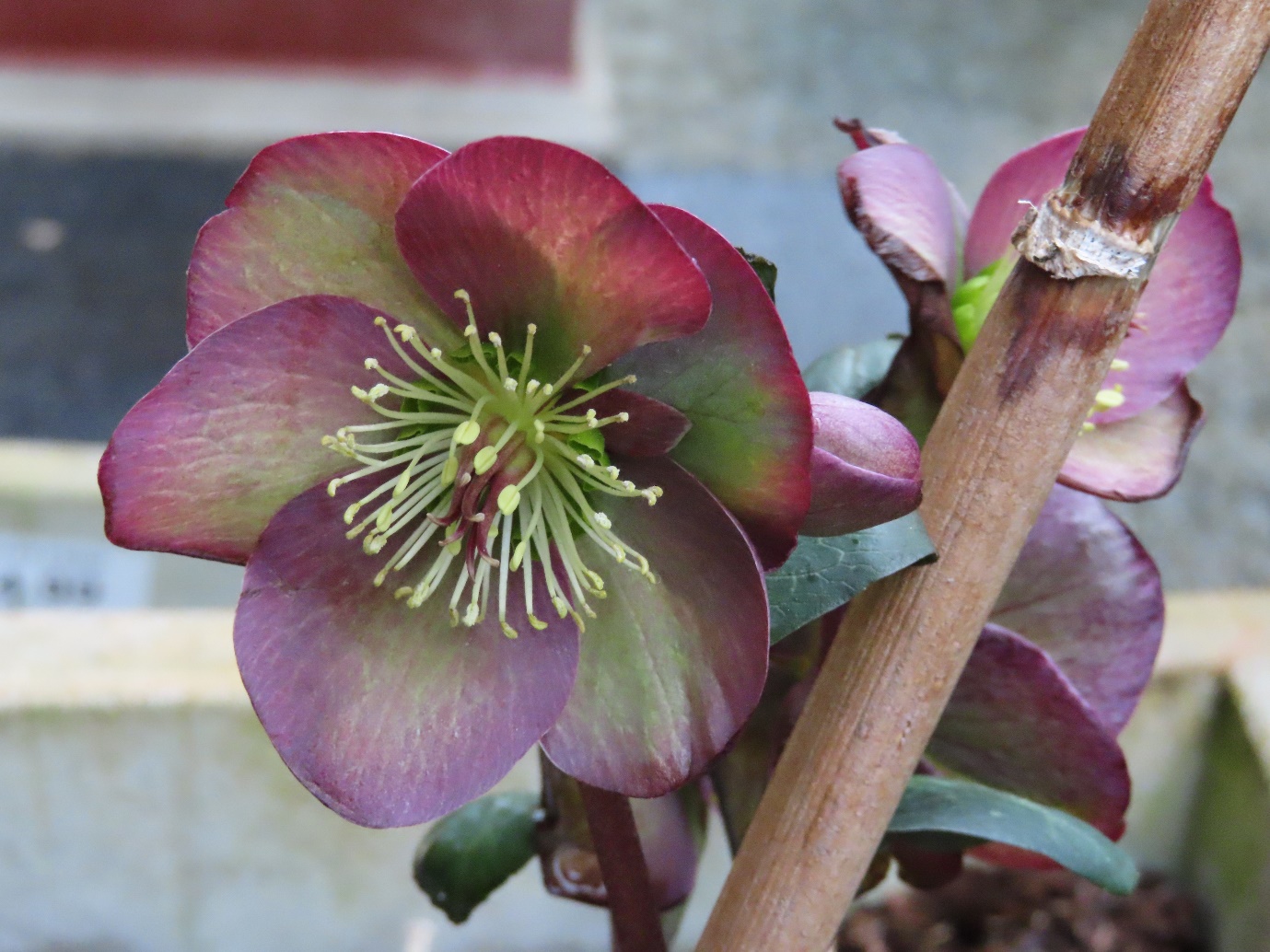 My hellebores continue to puzzle me. This specimen lives outside my backdoor to protect it from the rabbits. It looks very healthy and beautiful despite living in a wind tunnel. However, some of its companions in the garden have not been so lucky. I have found a number that have been eaten to the ground (leaves included) even when surrounded by chicken wire. I am reluctant to plant any more although they are one of my favourite flowers until I can find a permanent solution that does not involve hiding the flowers from their predators and myself at the same time. 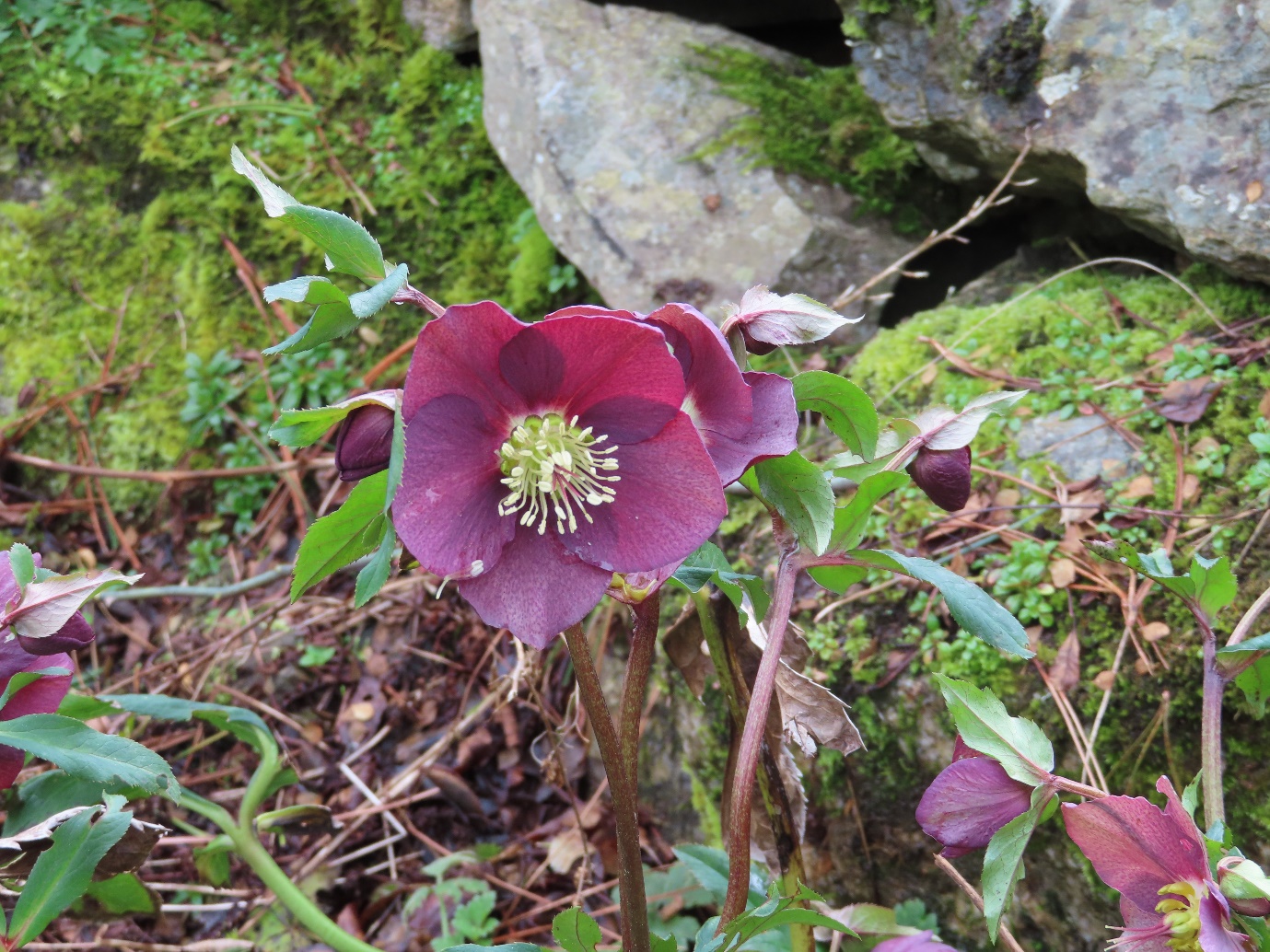 This is one hellebore that has escaped the rabbits/hares/mice or whatever it is that is feasting on the rest. It was also surrounded by chicken wire so maybe this saved it for once. 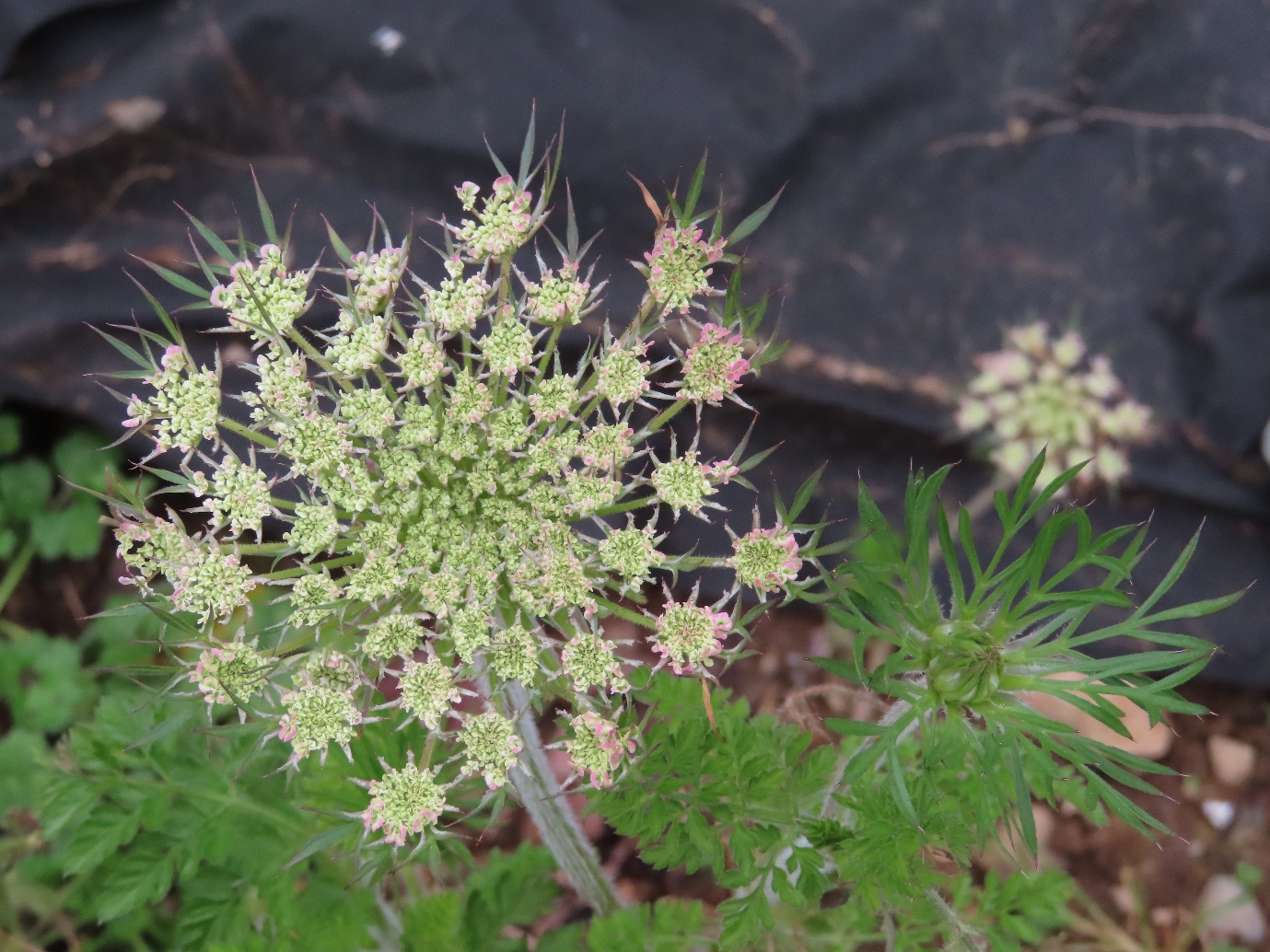 The wildflowers are also making an early appearance. This sea carrot should not be in flower until the summer. I have discovered that those that have pink-tinged flowers may be a separate sub species and I intend to try and collect some seeds this year. 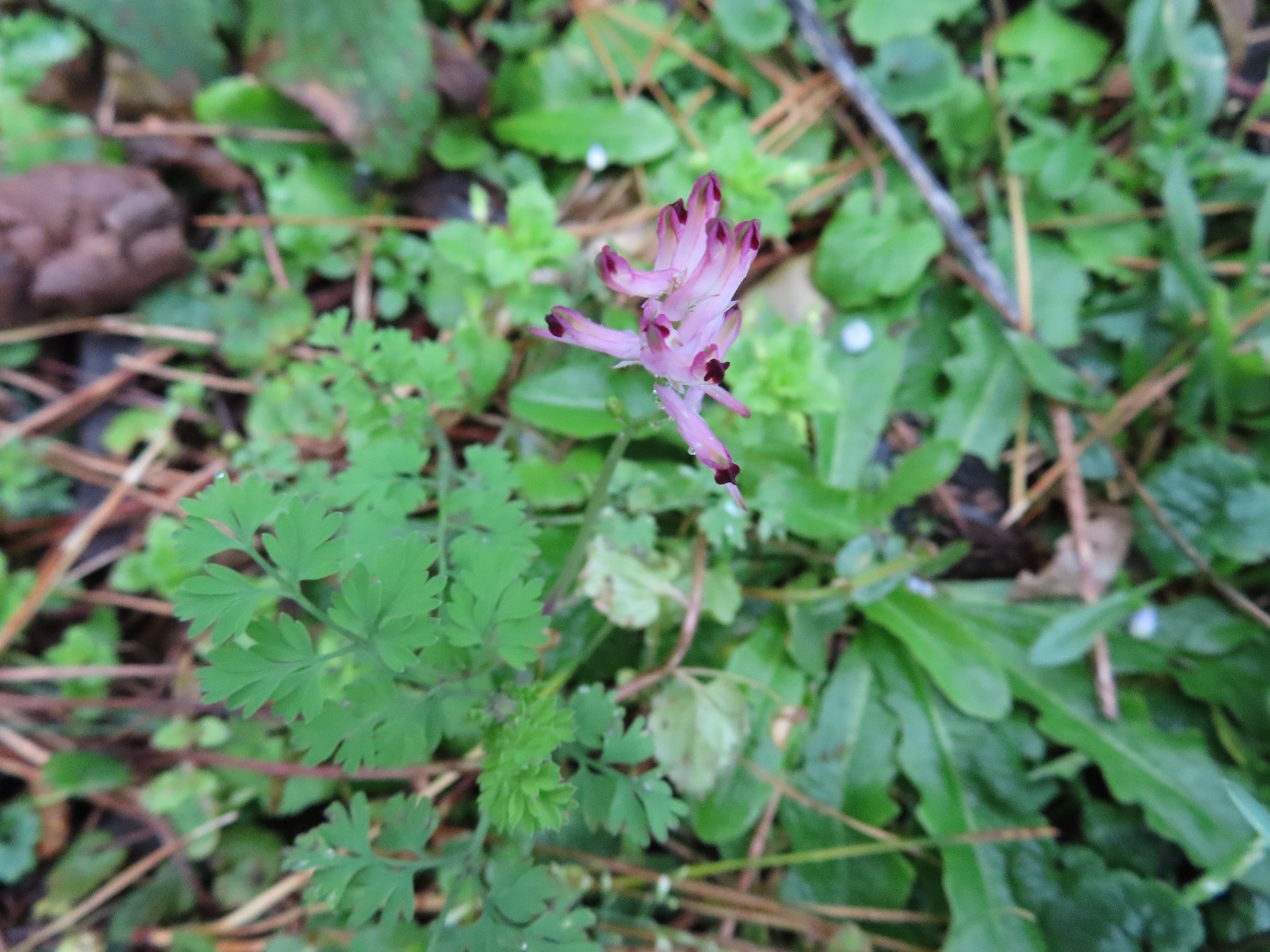 Common fumatory is usually most ‘common’ during the summer although it can be seen as early as March. The flowers heads are very delicate pink tipped with a dark purplish red. It took many tries to capture this photograph as the winds were so strong it never stayed still for a minute. It needs to be seen through a magnifying glass to appreciate its beauty. 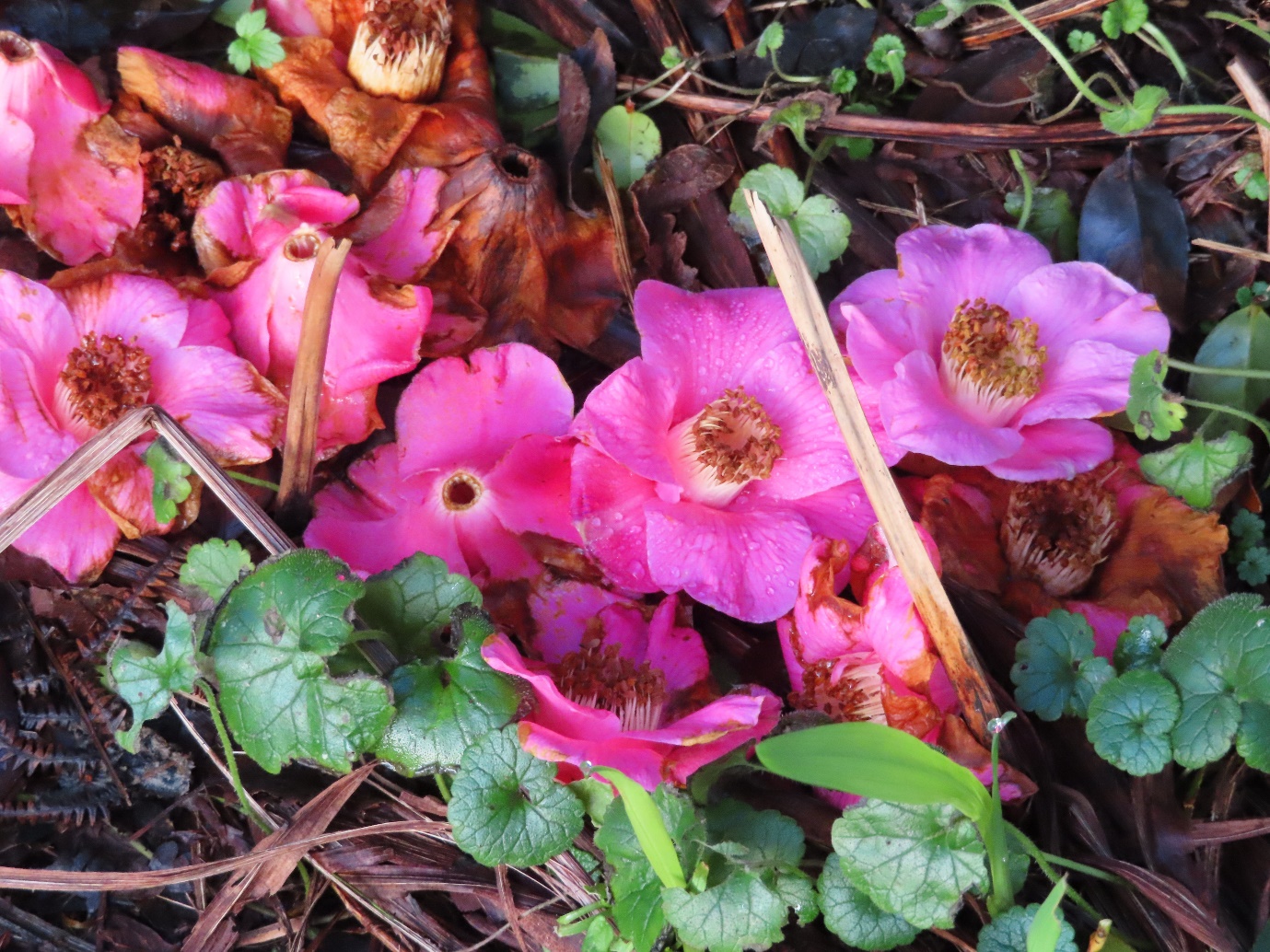 The recent storms have been ferocious and I have felt very lucky that there was so little damage in the garden. But even when the winds have buffeted the camellia the result has been a very pleasing carpet of petals. In a world full of chaos we need to stay in touch with the beauty of nature.