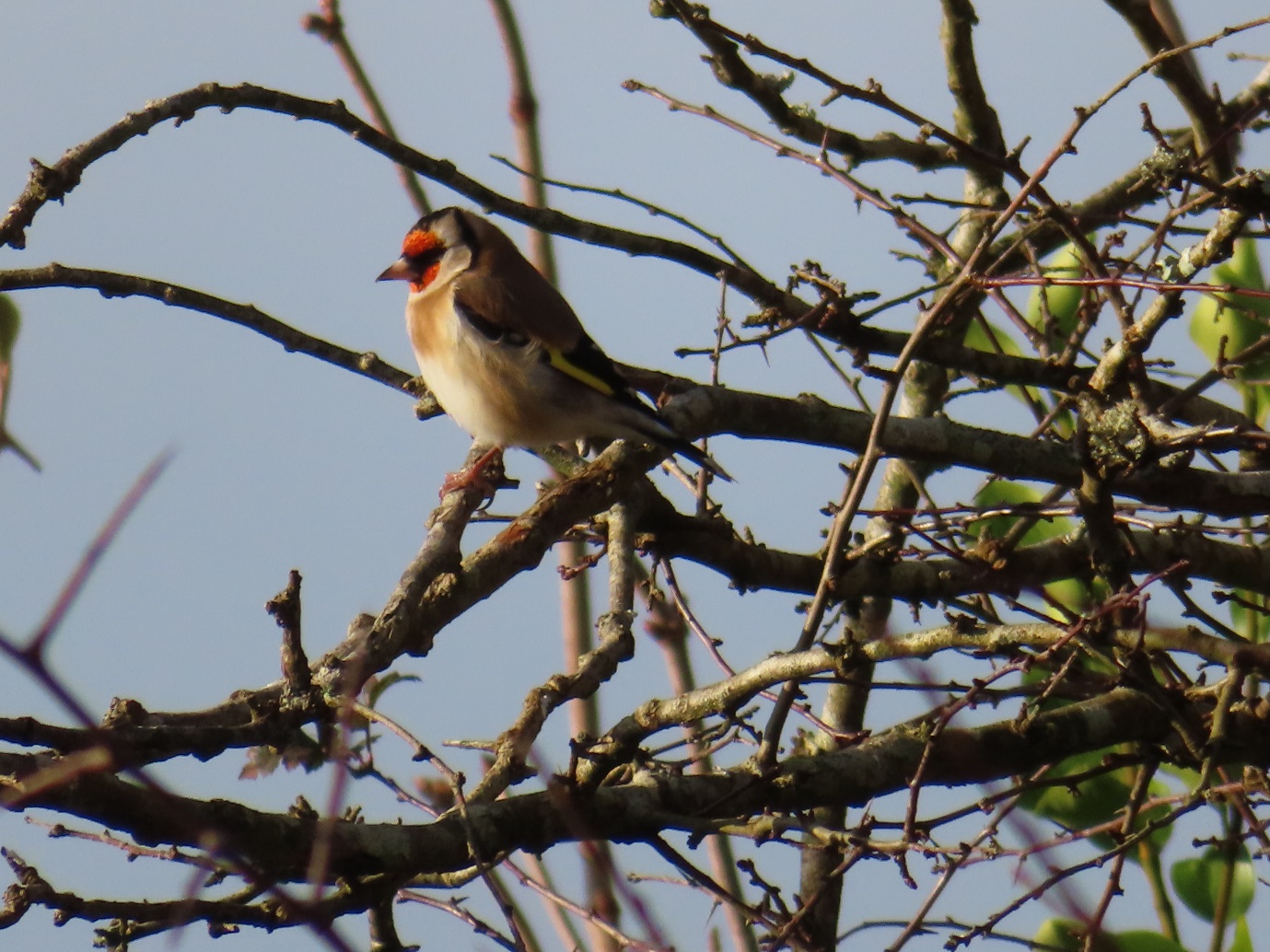 I was very distressed recently to discover my collie cross Millie standing beside me with a dead goldfinch in her mouth. I would like to think that she was not responsible for its death, but fear that the evidence is against her. This was one of at least forty goldfinches that have spent the winter in my garden. I have loved the sound of their endless chattering and bickering and mourn the loss of even one of them. I noticed that the bird was ringed and sent the details to the British Trust for Ornithology. In less than a day I had the bird’s history. She was ringed at St Austell in Cornwall on 30 October 2021 and had travelled 352 kms to spend the winter in my garden. It is sad that she has not been able to continue with her journey. There is evidence that another five birds, probably chaffinches, were taken from the driveway but as Millie cannot get past the gate, she is innocent of these crimes. I know that all creatures need to eat, but it does not make me feel any better about the loss of these beautiful birds and I have rearranged my feeding areas to try and prevent more deaths. 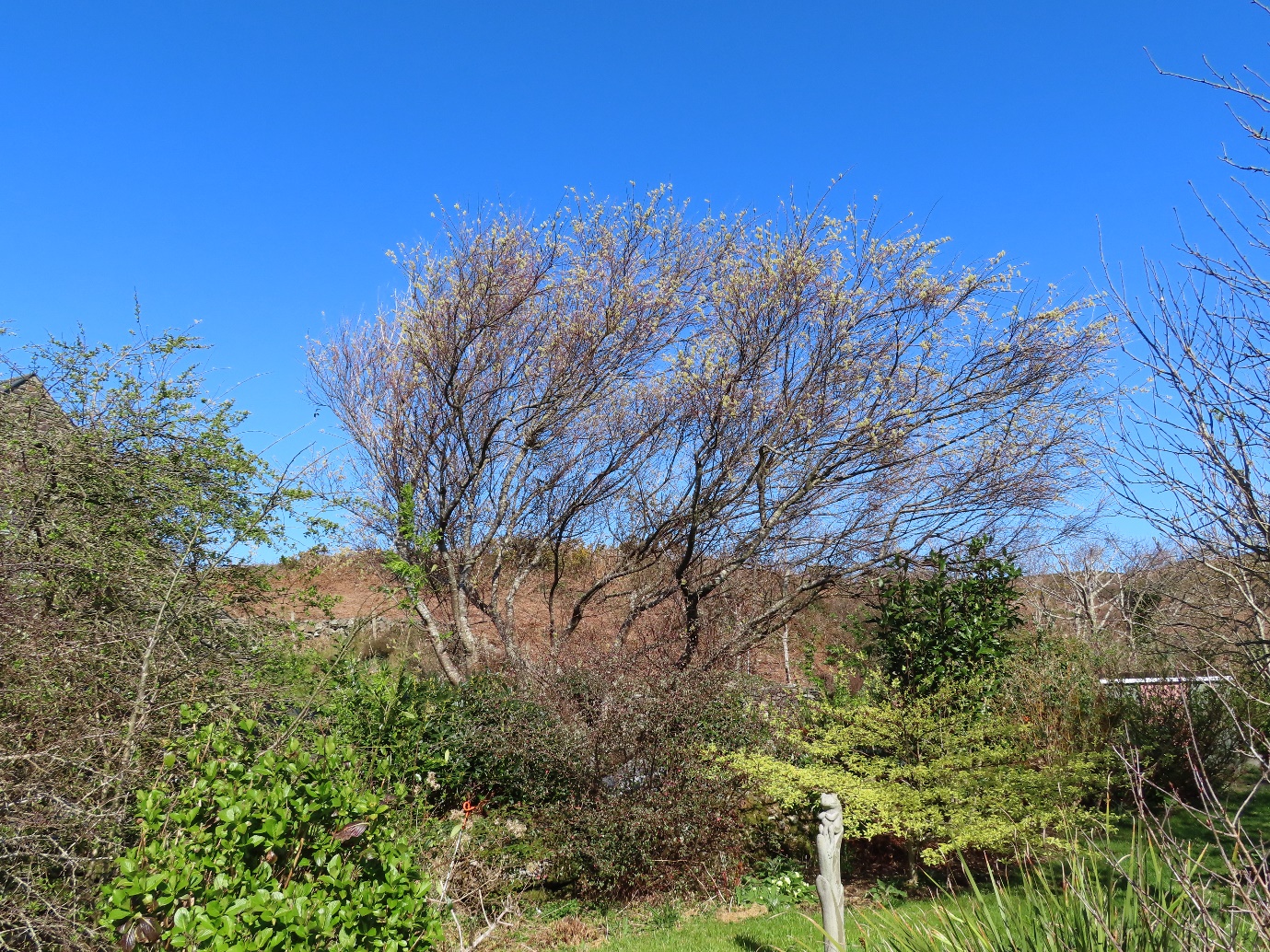 This is an old willow tree that was planted by the previous owner and is the perfect example of ‘windswept’. I love it for a number of reasons. It has survived years of storms and its history is etched into its shape. In summer the branches provide some sort of food to thousands of wasps who ignore me in the presence of so much nourishment. This winter I have noticed that my very shy long-tailed tit and a coal tit have been ignoring my feeding spots but spending hours in this tree pecking at the branches so it is obviously providing nourishment for them too. It and its neighbour lose a branch or two each year and I fear that one day they will succumb to the severe winter weather. However, it has not been generous with its cuttings and I have still to succeed in growing robust replacements from the parents. 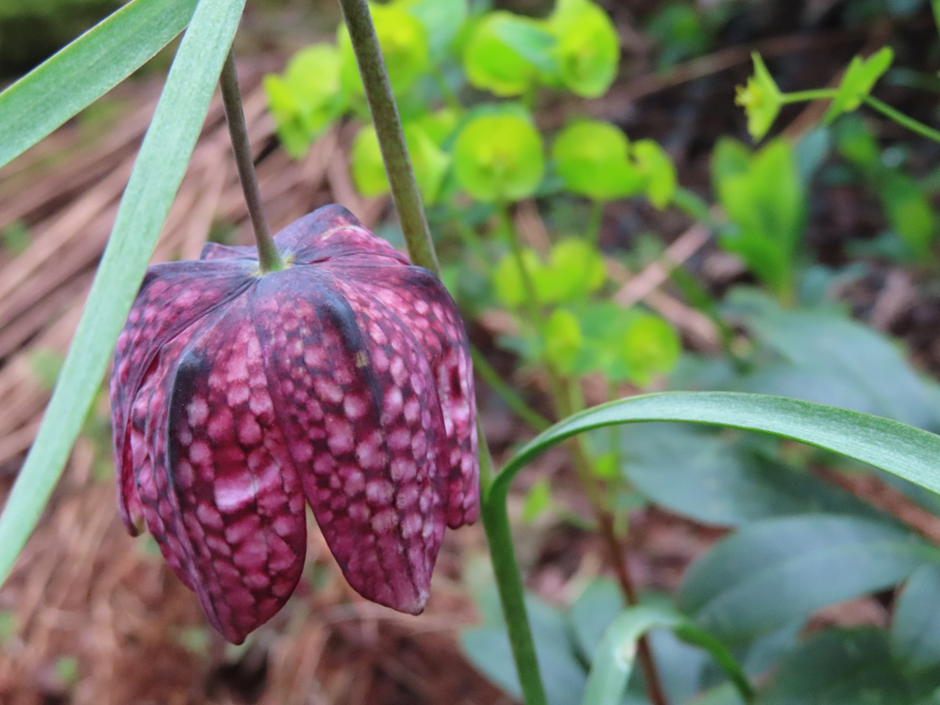 The willow trees also provide good protection for a number of shrubs. They and some old hawthorn trees provide a shaded area where Hosta and primroses flourish. Sadly, just two Snake’s Head Fritillary remain from the dozen or so that I planted some years ago so it is time to plant some more. As with daffodils my success with bulbs has been limited and I suspect four legged creatures who live in the walls are responsible for my poor crop. 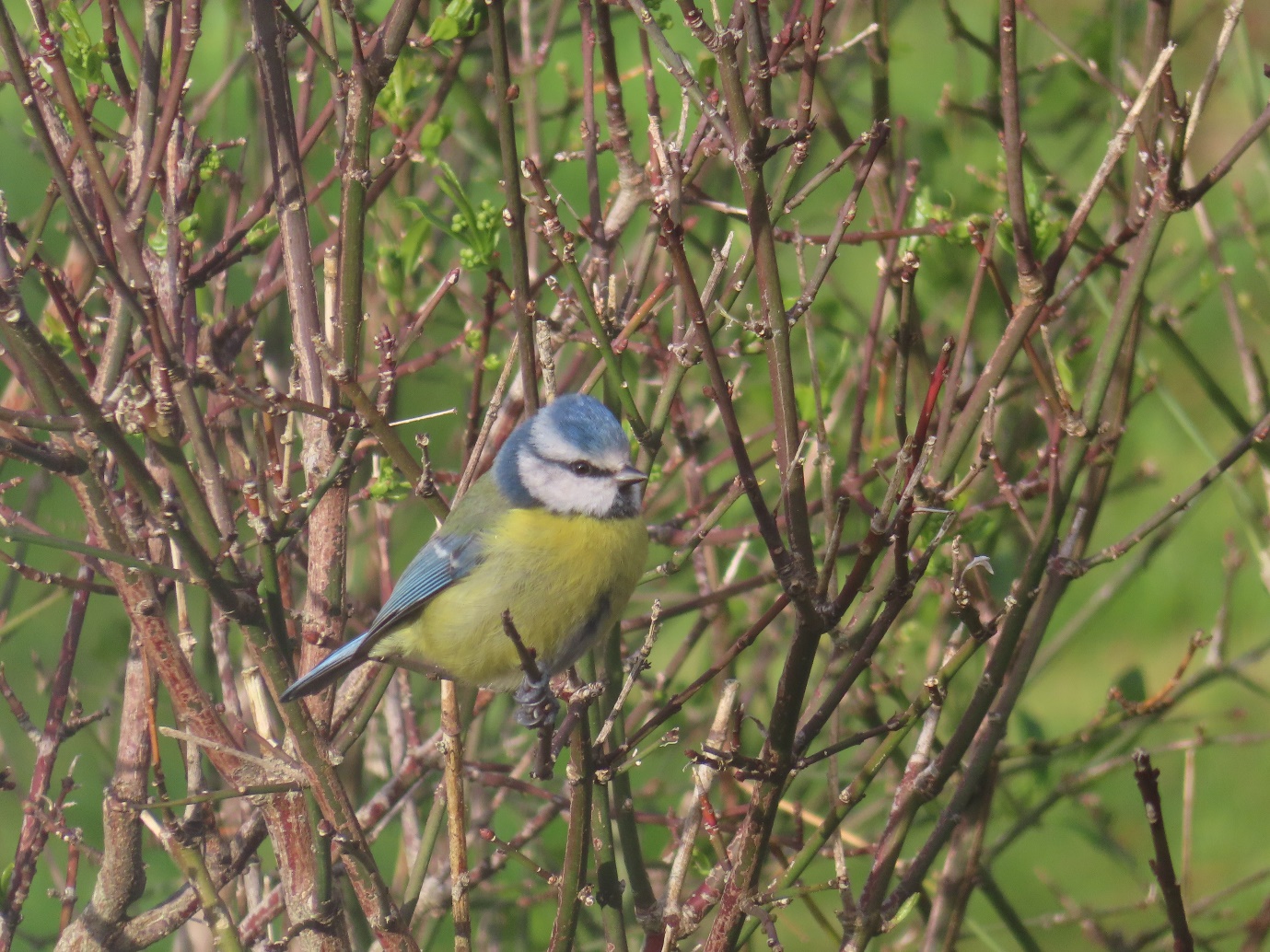 In the last few weeks, the birdlife in the garden has changed considerably. The goldfinches have reduced to a flock of about twelve and the chaffinches, blue tits and great tits are also much reduced. Song thrushes and blackbirds are in abundance and the collar dove continues to return each day. The pheasants make an occasional visit, but I can hear them in the fields around the house although they don’t come for food any more. I am delighted to see that wrens seem to be making homes in the dry-stone walls separating the garden from my fields as well as in the garden itself. All in all, in the absence of the crows and goldfinches the garden is much quieter but as this allows me to better hear the song thrush, blackbirds and robins I am not complaining. 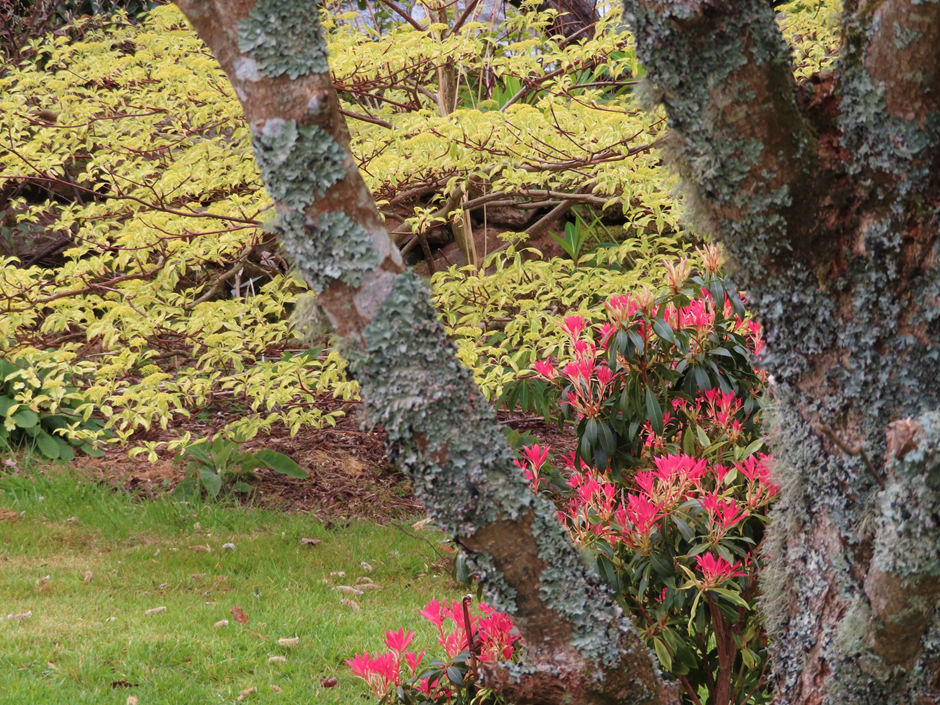 My shrub planting in the copse is beginning to mature and I am very pleased with the result. I have used a mixture of shrubs including Camellia, Skimmia Japonica, Eleagnus and Hydrangea to provided greenery and shelter all year round and it is a colourful place at this time of the year. The Cornus Controversa Variegata goes well with the Pieris Forest Flame and is proving to be a robust tree. Like all of the spaces in my garden the copse is not very big but it has a number of Italian alder, oak trees and whitebeam. I planted the shrubbery to provide islands of colour and shelter but did not want to overwhelm the space. The presence of so many birds is heartening and most enjoy singing from the top of the alder trees. 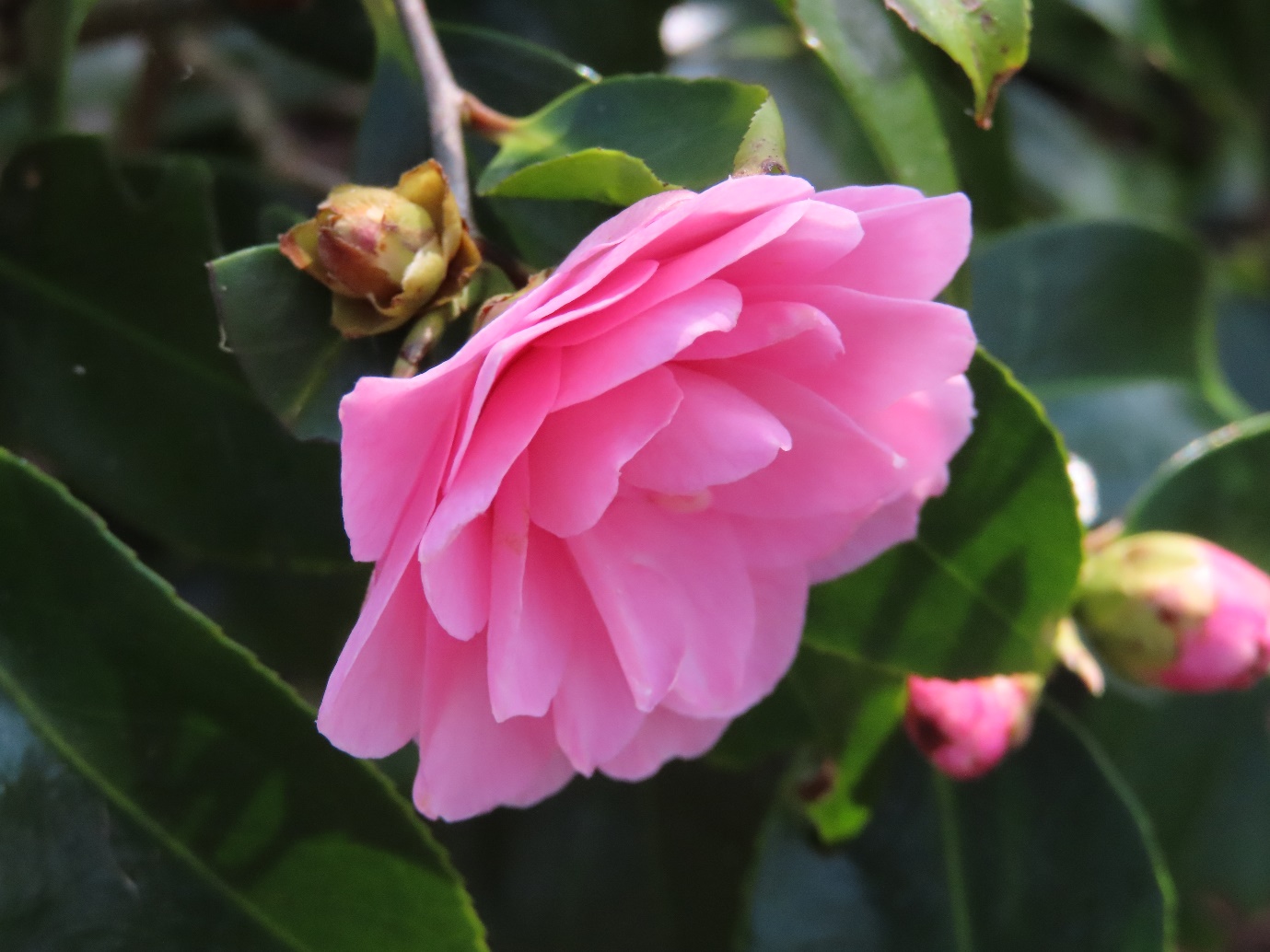 New Camellias continue to flower in the copse and should make an even more dramatic display as they mature. 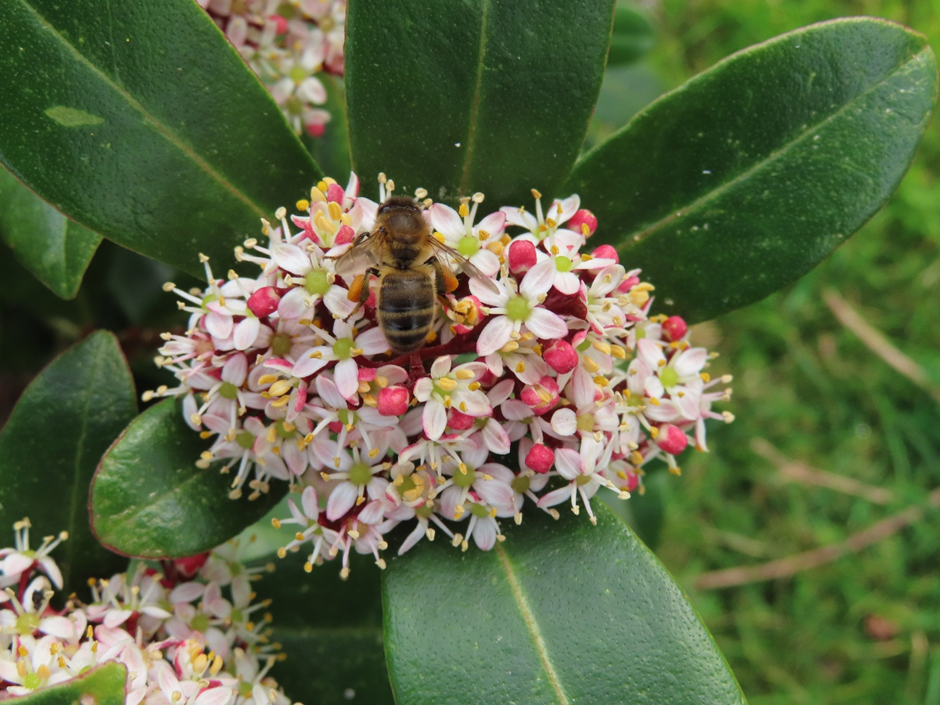 On sunny days the Skimmia are covered in bees and other insects and if you look closely at this bee, you can see that its pollen sacks are almost full. I have found that Skimmia and Berberis are two of the most prolific pollen producers at this time of the year and am glad that I have planted so many around the garden for those early bees and other insects. 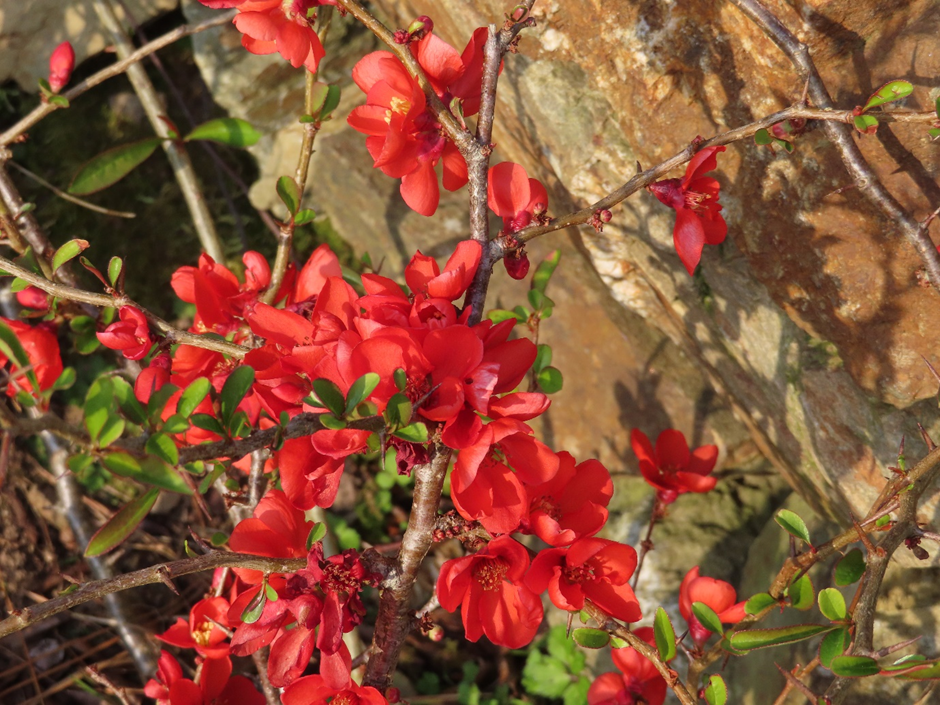 I had assumed that my red Chaenomeles was not going to blossom this year as it is in such an inhospitable corner of the fruit garden. It has surpassed all expectations and I am now reluctant to move it in case I kill it. It makes a nice contrast with the low dry stone wall that supports it and may continue to flourish if I keep it pruned to the height of the wall. 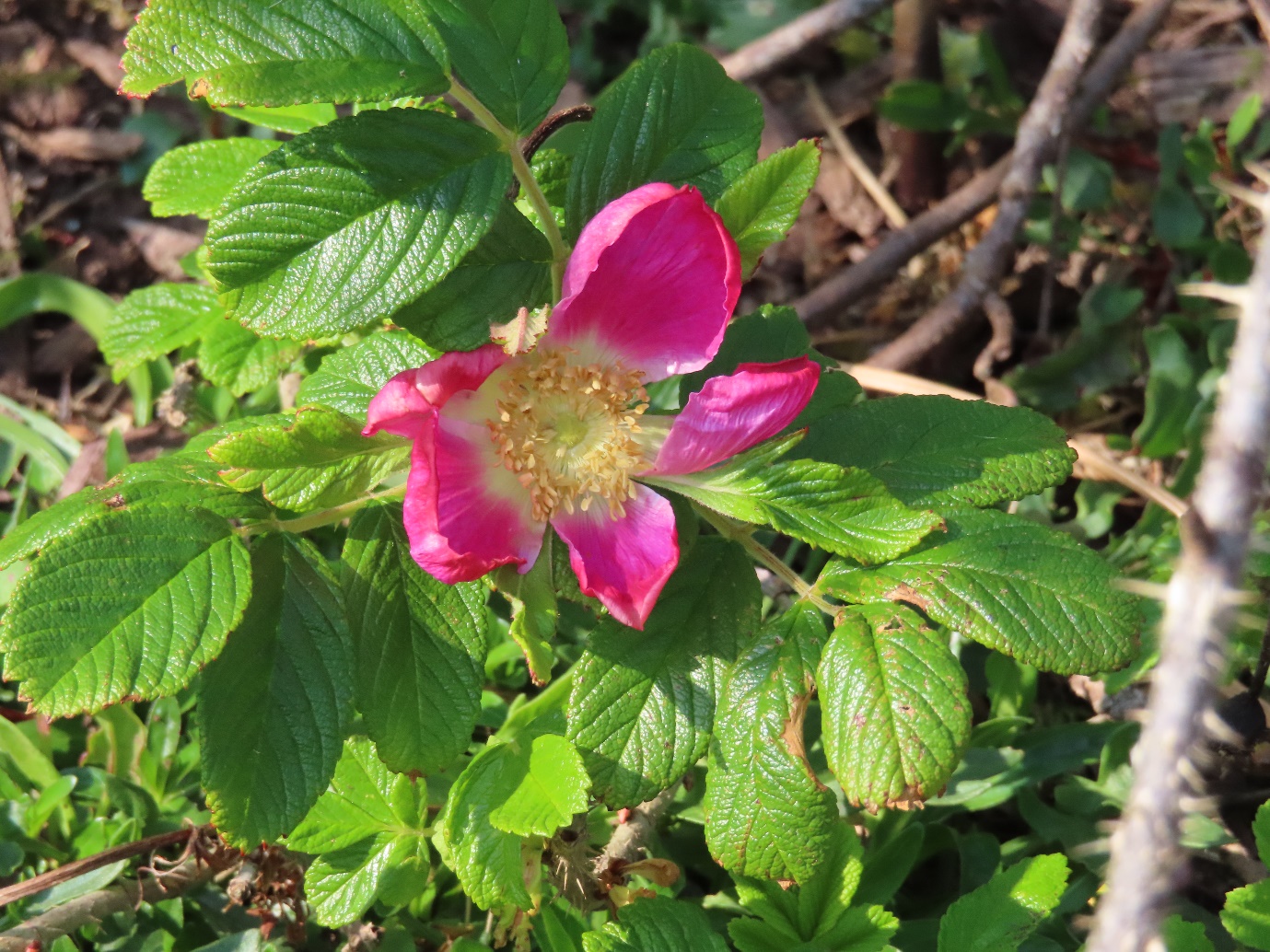 The first Rosa Rugosa of the year sitting in solitary splendour on my driveway. How it has survived the cold and winds is beyond me. It is reassuring to see it just as I am using up the last of my rosehip syrup. 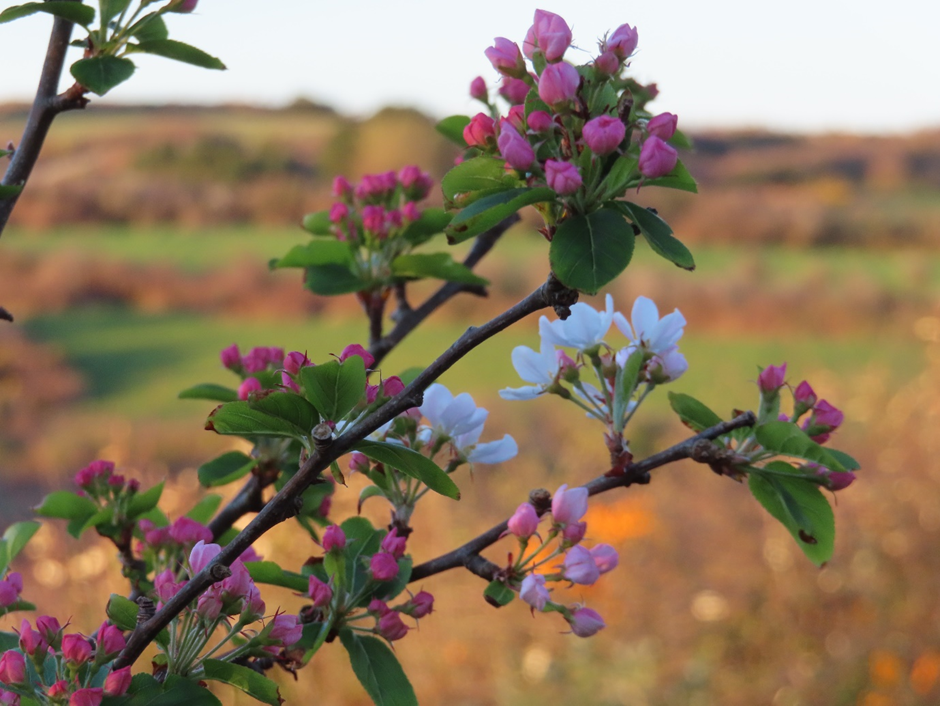 The garden is awash with colour as the crabapples and Amelanchier Lamarkii are in full bloom and the first cherry tree has started to blossom. They are even managing to retain their flowers despite the strong cold winds. I still find it hard to believe that I can grow these trees here and you can see from the next photograph how close, and how exposed, they are to the sea. 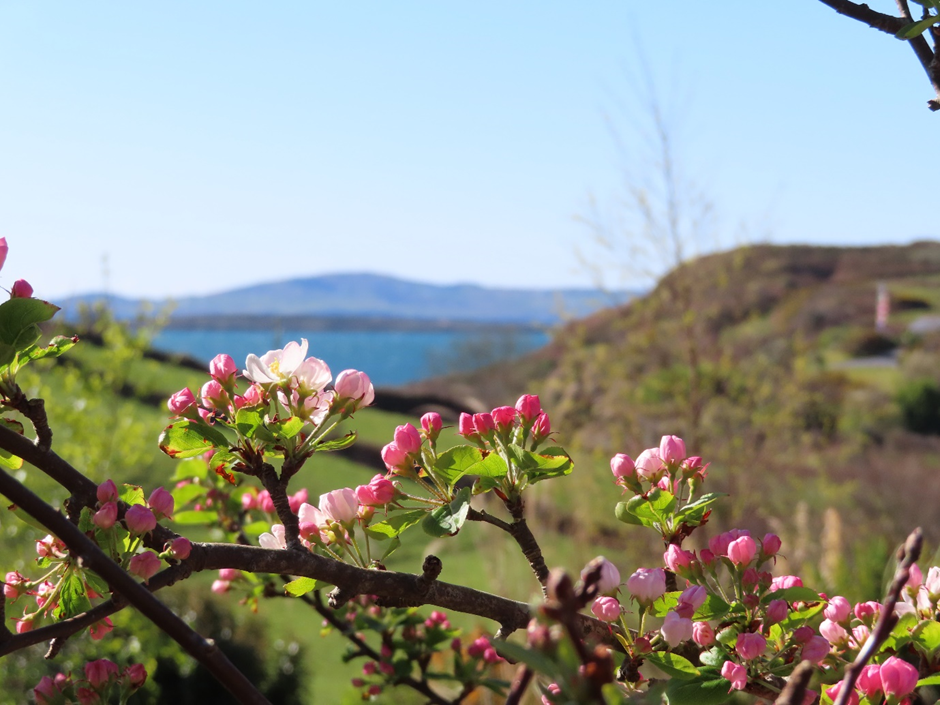 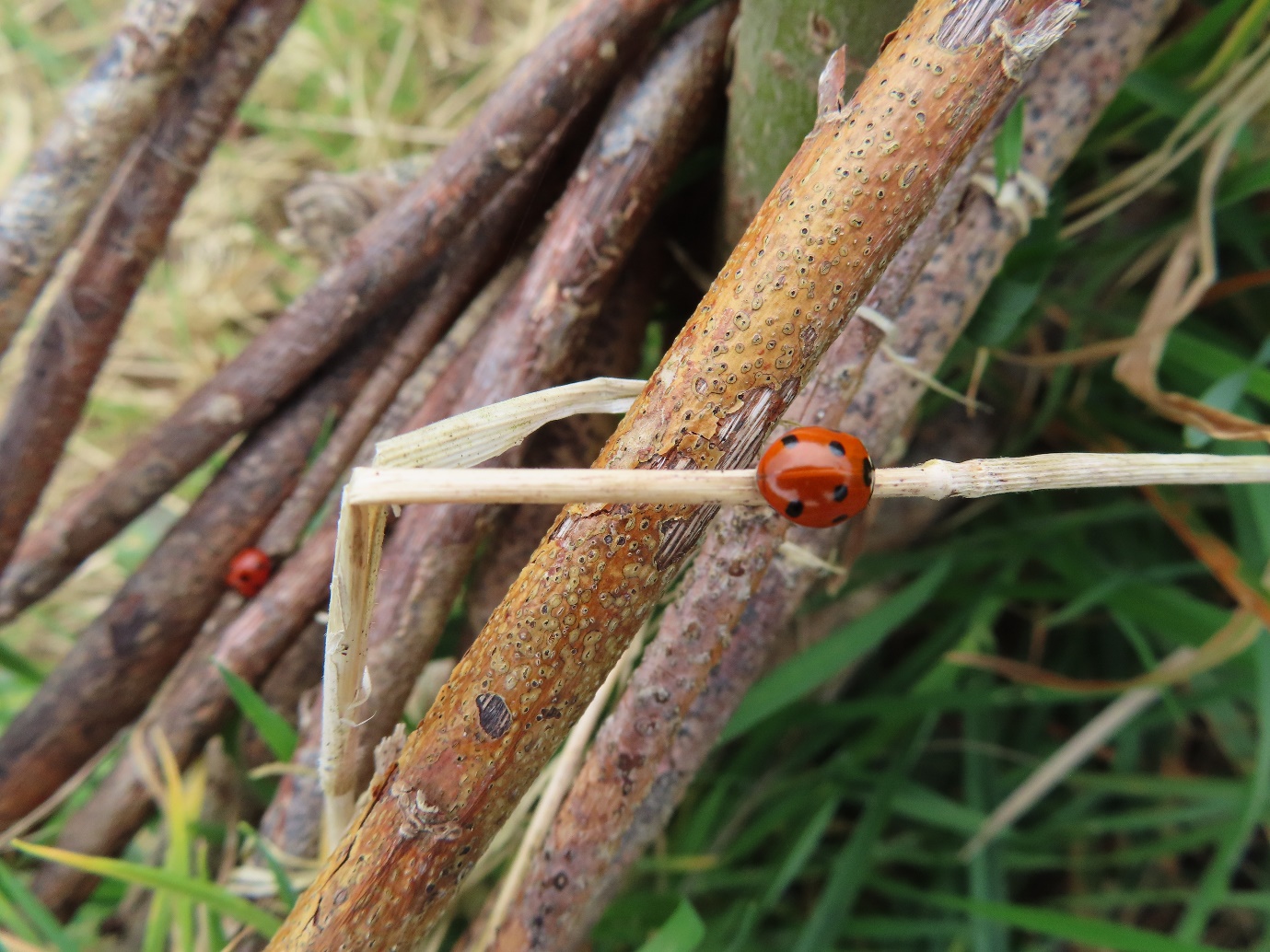 This is the first time that I have seen a ladybird so early in the year. In fact, I rarely see any at all. It was in the company of at least five others all sunning themselves on my ramshackle willow fence in the field. I had intended to replace the fence but it obviously is the perfect habitat for them so ramshackle has now become the new chic. 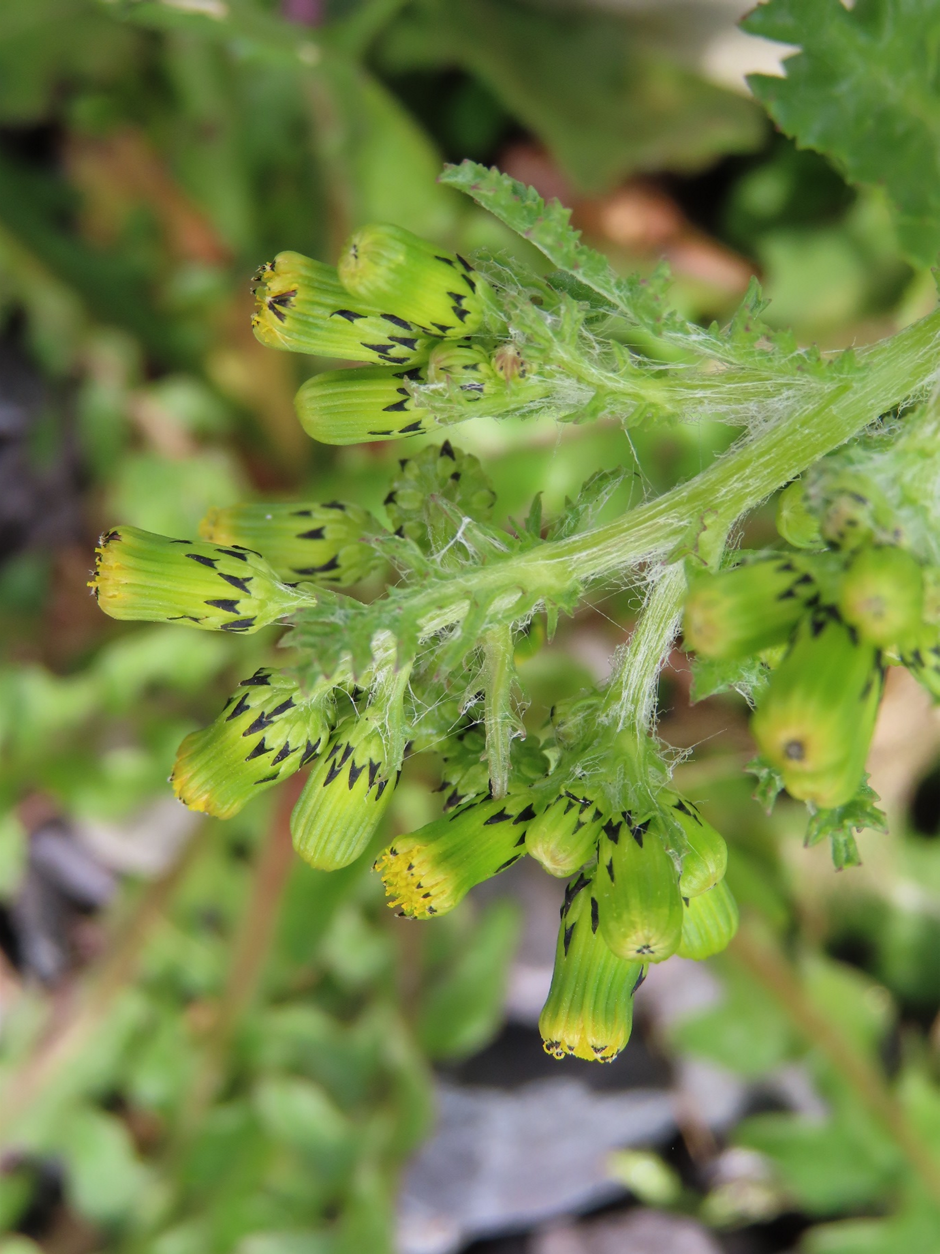 With my second garden in Scotland. I made the decision not to plant any wildflowers. The reasons were twofold – firstly, I was not happy with planting flowers that were not native to the area, and secondly, I quickly discovered that when I left land fallow and looked carefully around the garden there were wildflowers in abundance. I have continued this practice to this day. Last year I had over eighty different varieties of wildflowers and every year new ones appear. 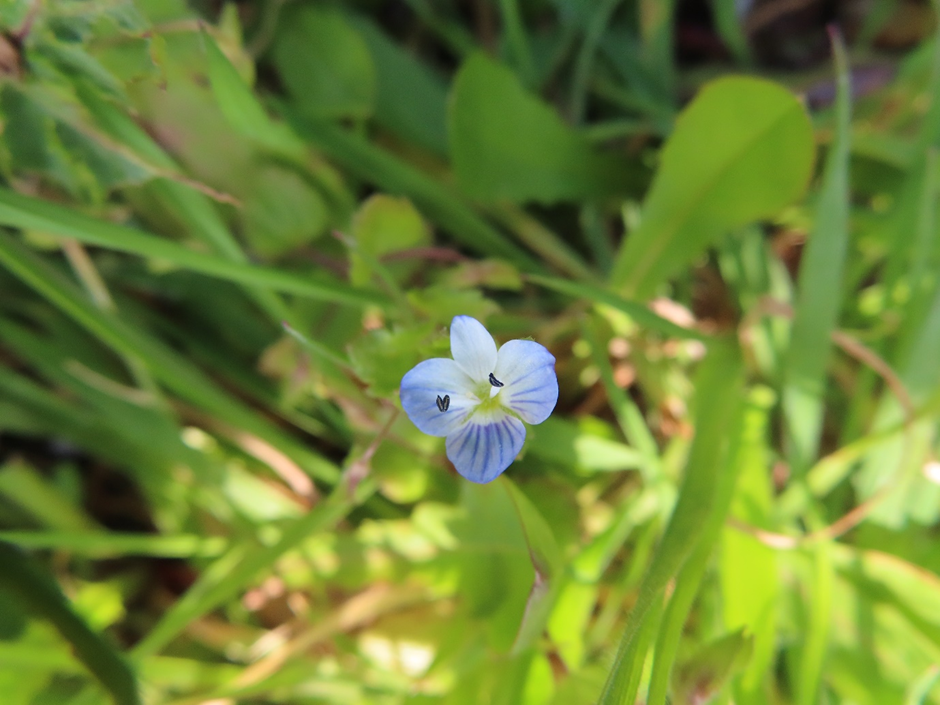 I think that most wildflowers get overlooked because they are so tiny. This Germander speedwell is minuscule but very beautiful if you put in the effort to see it properly. In my case getting this photograph involved lying flat on the ground on a freezing cold day. Not too much to ask for such a beauty. Getting up was another matter and considerably more complicated than lying down. Doing so with dignity was impossible. 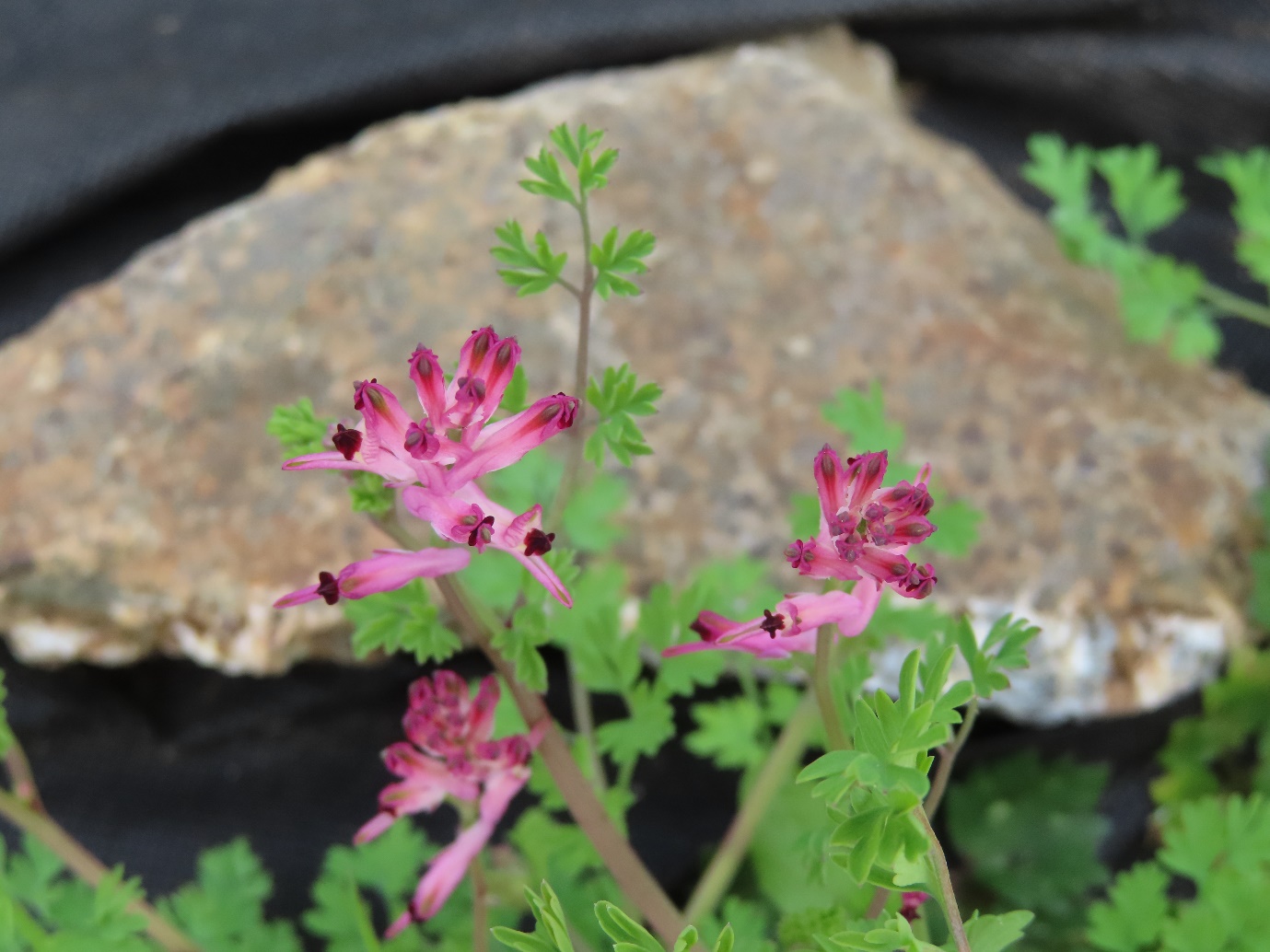 I finally managed to get a clear photograph of one of the prettiest wildflowers in the garden. Despite its size this Common Ramping Fumitory is now clearly seen in the vegetable beds as the plants are now full of flowers. When I look at these three examples of wildflowers that grow in my garden without any help from myself, I am delighted. I have no urge to go and buy annuals for colour, but eagerly await what new specimens may emerge from the ground and their location each year as it is always a lottery. Best of all the mice do not seem to like them so the birds get their share of the seeds each season. Everyone wins a rare occurrence in these days.

2 responses to “A LONG JOURNEY”