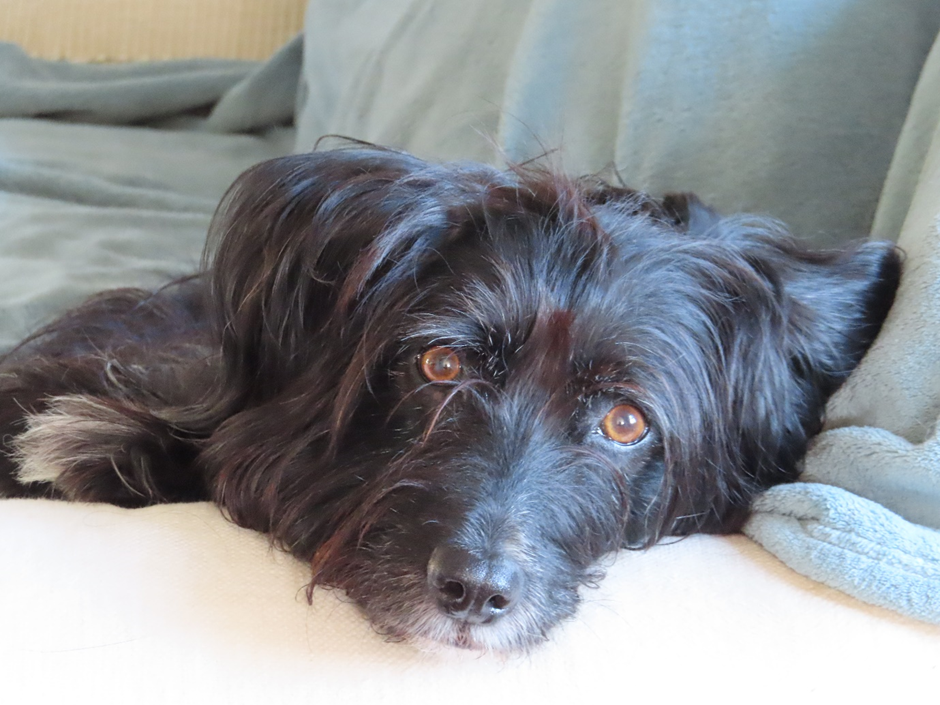 For a number of reasons I am unlikely to pose a threat to the local organic vegetable growers. I have been happily having a medley of young vegetables for my evening meal only to discover that my ’baby spinach’ is actually pak choi. Even worse I have no idea where the spinach has gone. I am likely to have about four beetroot in couple of weeks and after years of success with onions this year they are a disaster. Pests are also a problem in the vegetable garden and sadly Millie my collie terrier cross is the worst. Don’t be taken in by the cute face. In the five minutes that I was taking a break the other day she dug up a potato plant (and brought it over to eat it in my company), finished off the strawberries that the birds had missed and checked to see if the blackcurrants were ready. When I admonished her she flew past me stealing a handkerchief from my pocket as she went. As she is almost ten years old I have no optimism that her thefts will stop and I will have to continue to use my local suppliers indefinitely as reliable sources of fruit and vegetables. 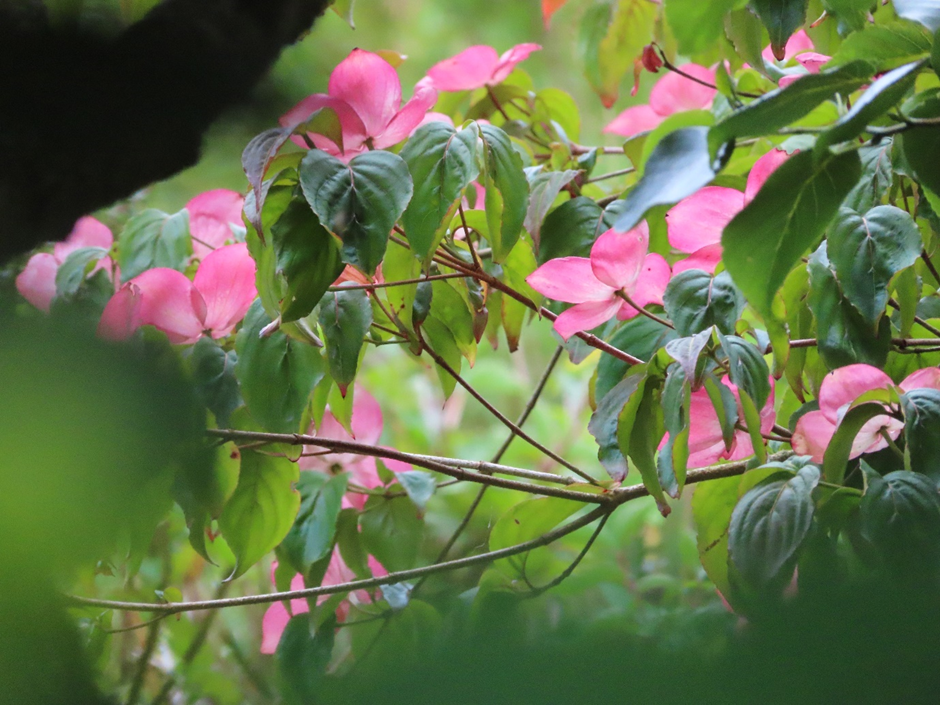 The Kornus Kuosa Santoni is finally starting to fade after months of flowering. It has to be one of the most reliable, as well as the most beautiful, shrubs in the garden and I hope to add to my selection next year. I have given it one heavy dose of water in the hope that it keeps it healthy until we have rain again. 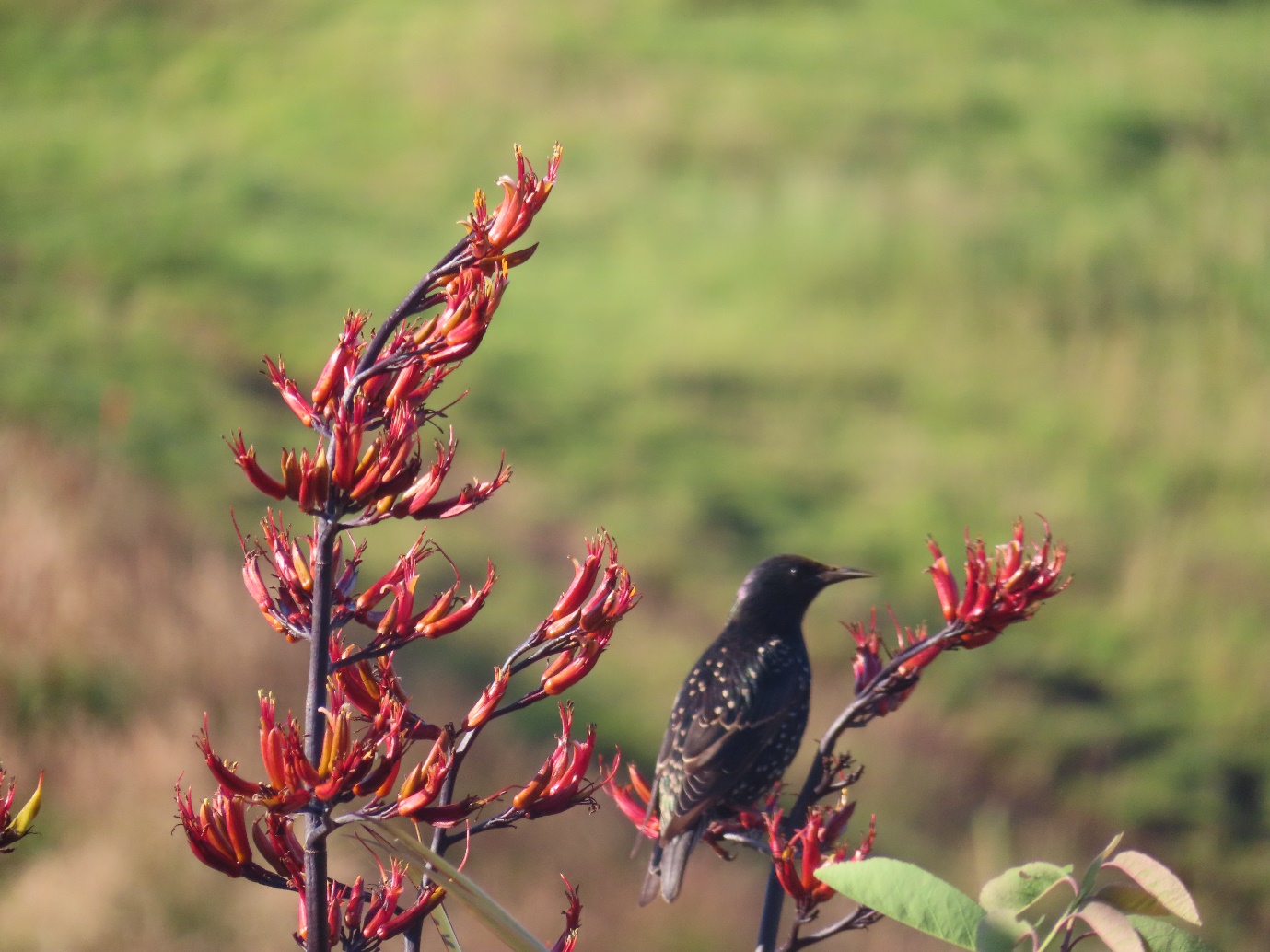 The brown leaved Phormium or New Zealand flax is the last to produce its flowers. For some reason the flock of starlings that used to visit the other varieties in bloom on a regular basis have disappeared. One lone visitor appears two or three times a day to feed from the freshly opening flowers and I wonder why this is. It is at these times I wish that I had a better understanding of the habits of the wildlife in my garden as it is a puzzle as to why this bird is on its own. 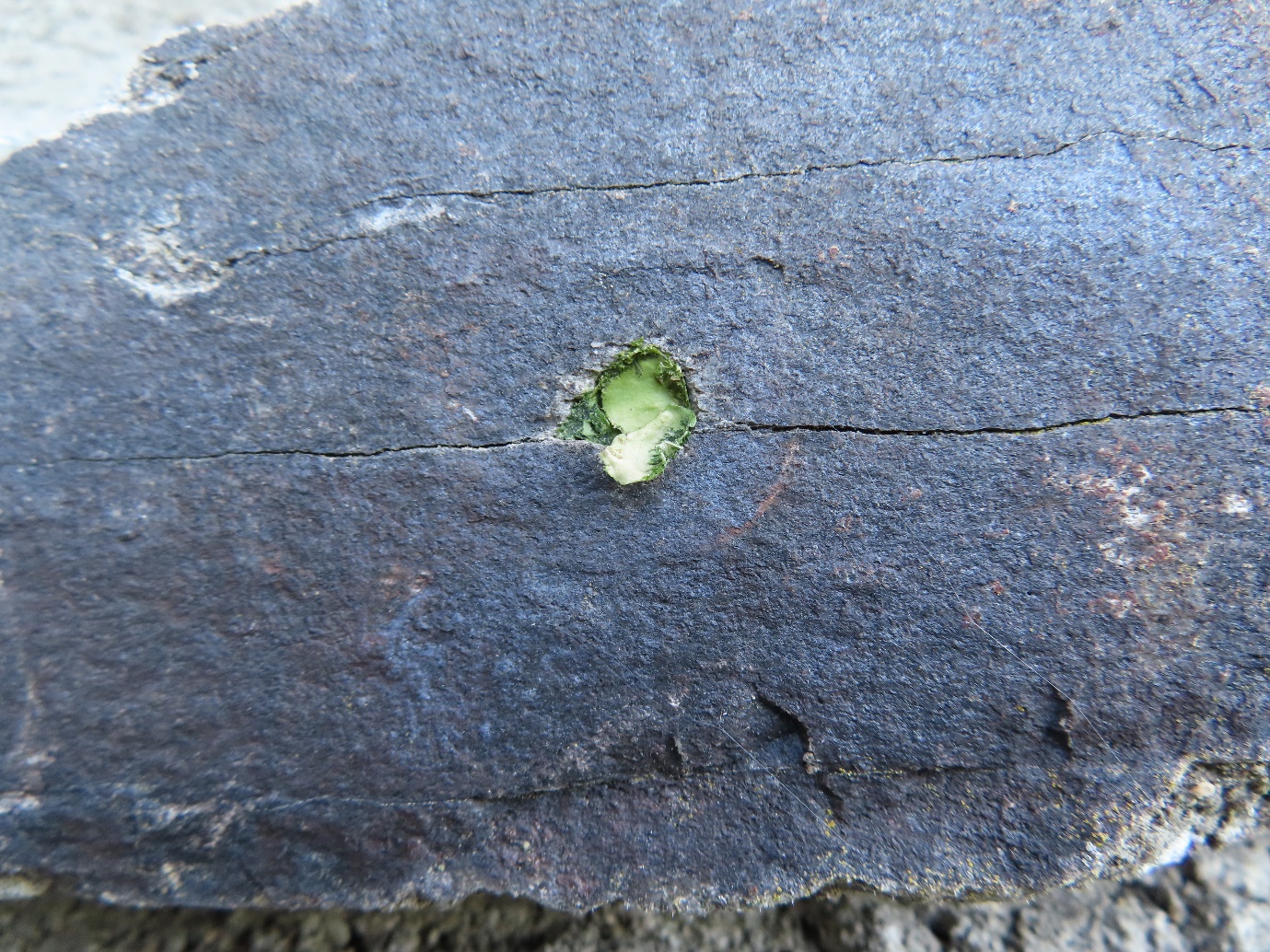 In recent weeks it has been too hot to sit on the patio which faces south and I almost missed my annual entertainment watching the leaf cutter bees fill the walls of my house. When these leaves above turn brown you will hardly know that the hole contains food and shelter for the nests that the bees have made. In this instant the bees have used a hole made by a nail but as the house is largely covered in a semi dry stone cladding, they have endless spaces to choose from as seen below. 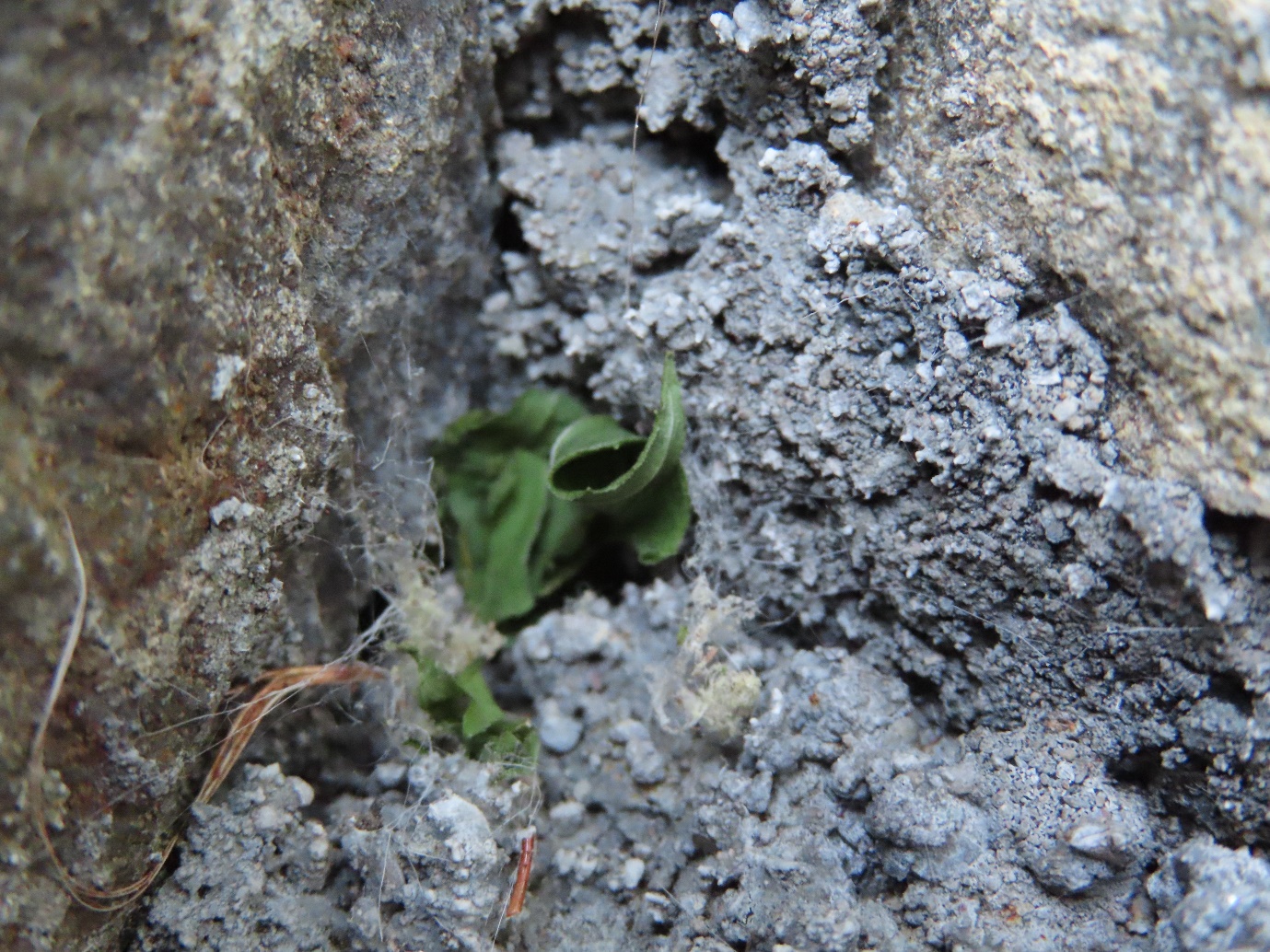 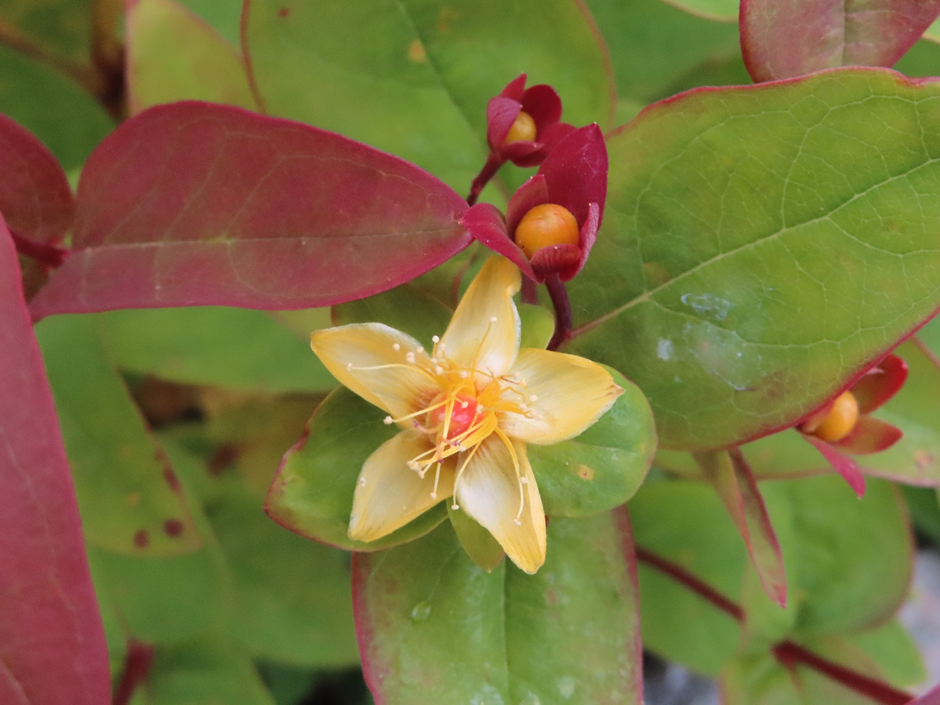 The hot summer has not been good to the Hypericum and this was taken before they all started showing signs of heat stroke. If the hot summer continues, I will have to try and provide some with TLC in the form of copious amounts of water. 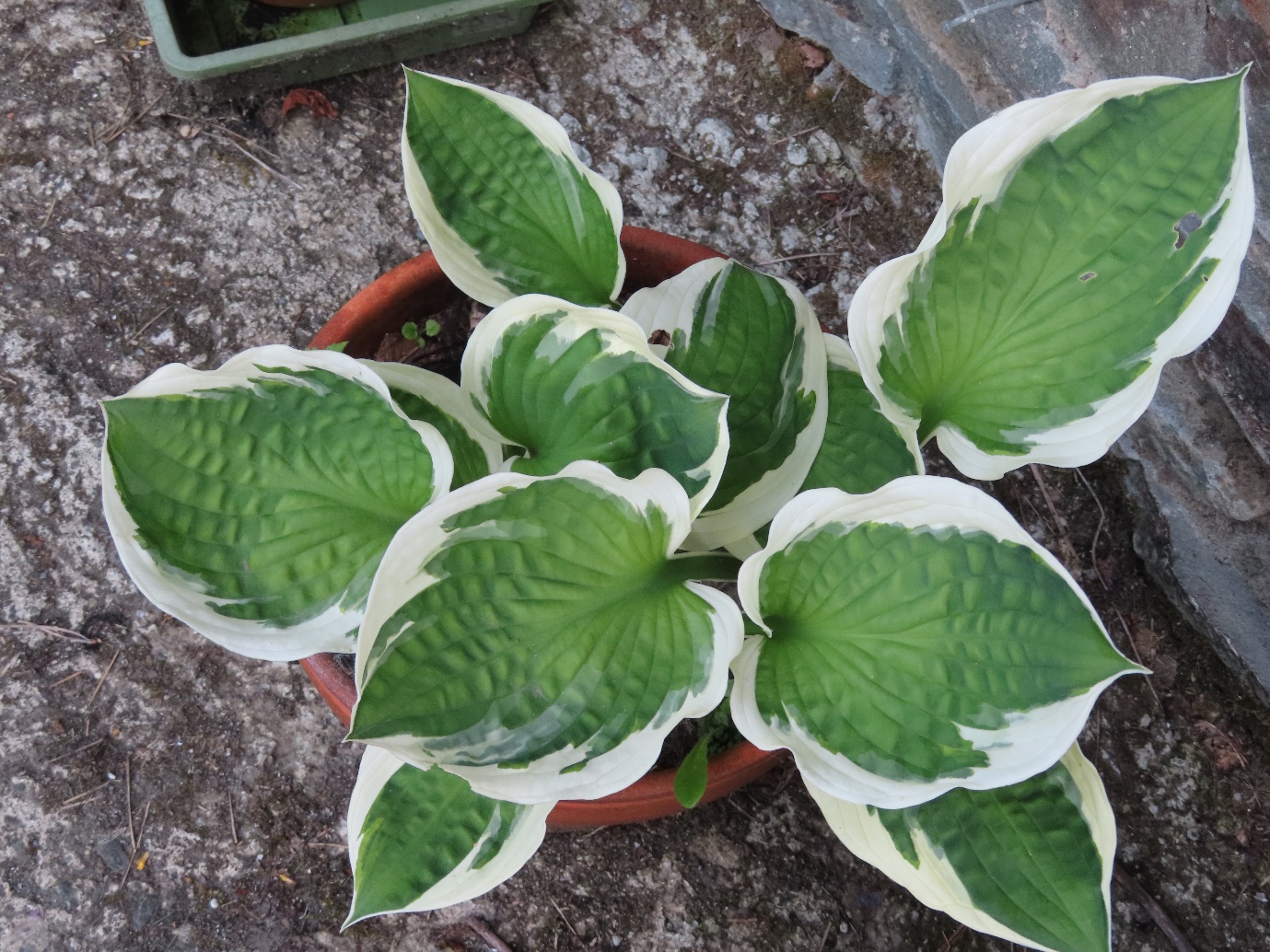 I am a great believer in natural solutions to most problems but I sometimes wonder if the people giving the advice are pulling my leg. I have been informed on more than one occasion that snails hate hair and you can protect your Hosta by surrounding them with same. After brushing the dogs until they are nearly bald and sacrificing my own hair, although I can ill afford to, I duly covered all of the potted Hosta by the house and awaited the results. I would like to say that this Hosta is a sign that the method worked. However, this plant is untouched by snails year after year and as usual all of its companions are shredded wheat. Meanwhile the Hosta that are placed deep in shrubberies (where I can’t see them) are also pristine. There is a lesson in this somewhere. 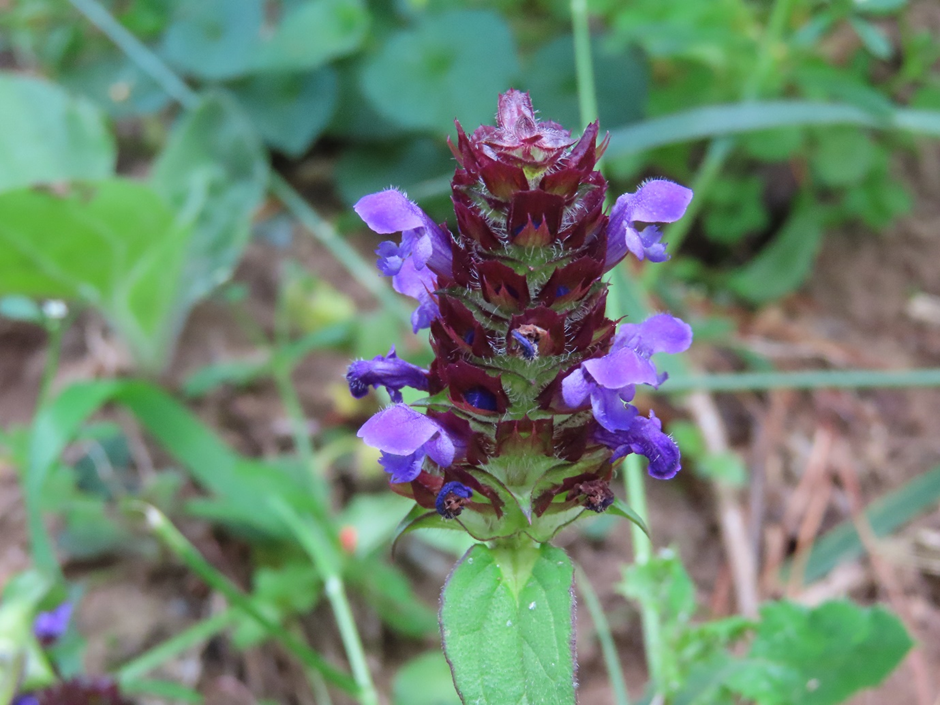 Selfheal is a member of the mint family and gets its name from its use as a medicinal herb to stop bleeding and heal wounds. This year the plants are much smaller than usual and I presume they are reacting to the long dry spell. 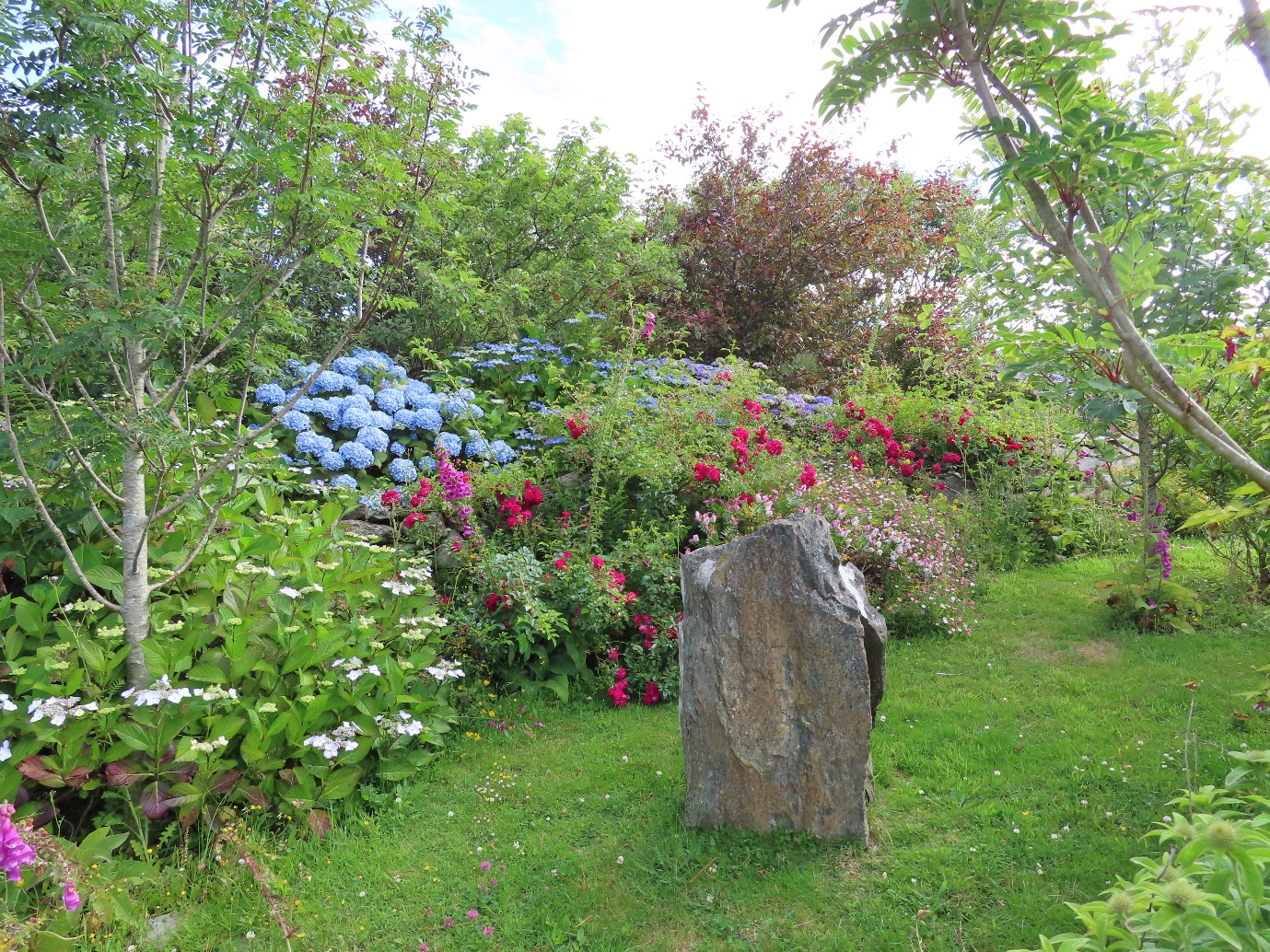 It is a particularly good year for the climbing and rambling roses. I did not get around to pruning all of those in the standing stone garden so it is probably more accurate to describe them as galloping rather than rambling. I prefer these and Rosa Rugosa to the more ‘cultivated’ roses and it is worth noting that all remain very healthy. From the chunks out of their leaves they are a favourite with the leaf cutting bees. 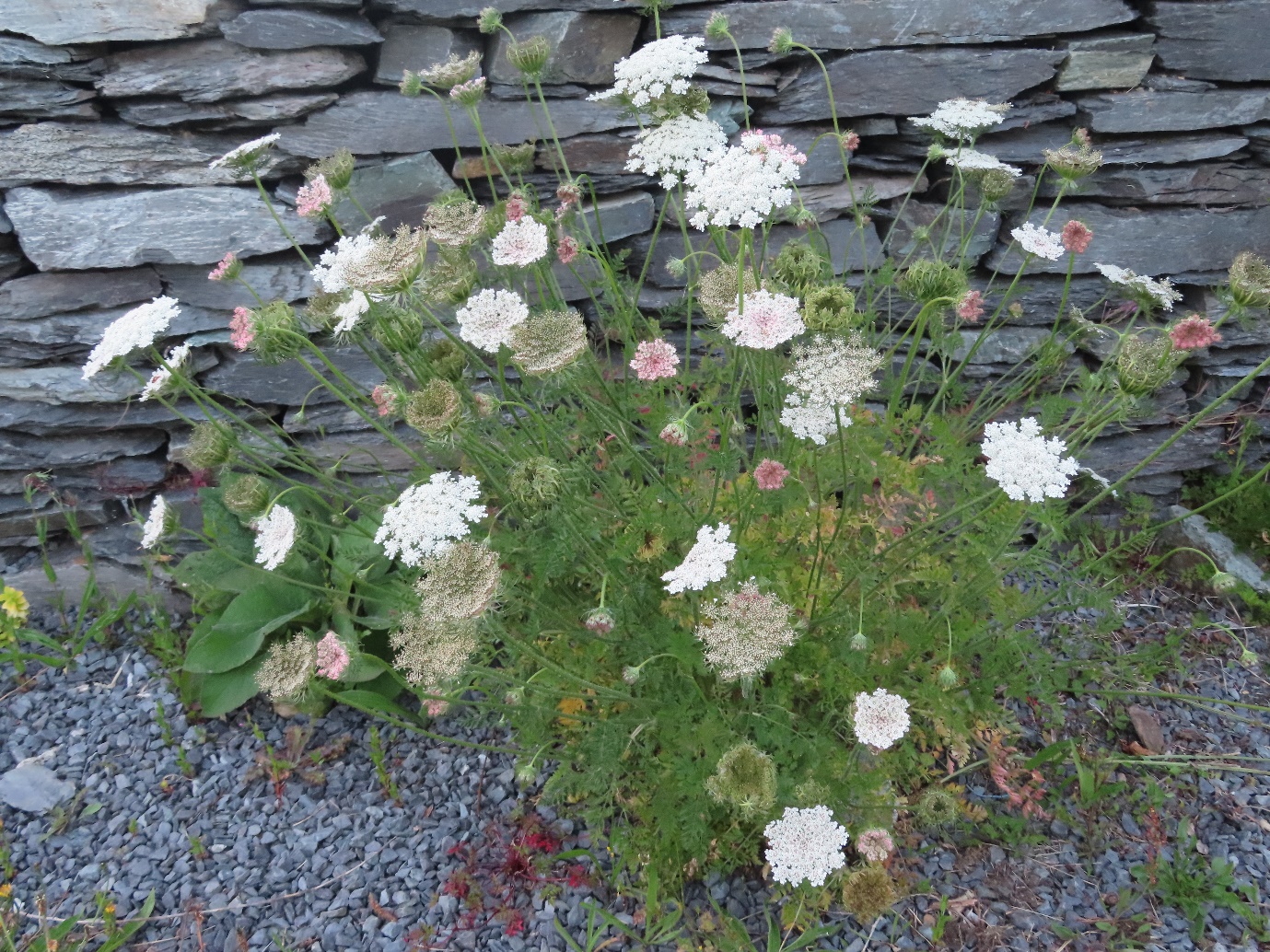 The sea carrot is spreading about the garden in impressive displays that are equal to any herbaceous plant. It usually is covered in soldier ants although they are scarce this year. The young flowers are often tinged pink and apparently there is a variety that is totally pink. This appeared in my garden last year and I hope it returns. 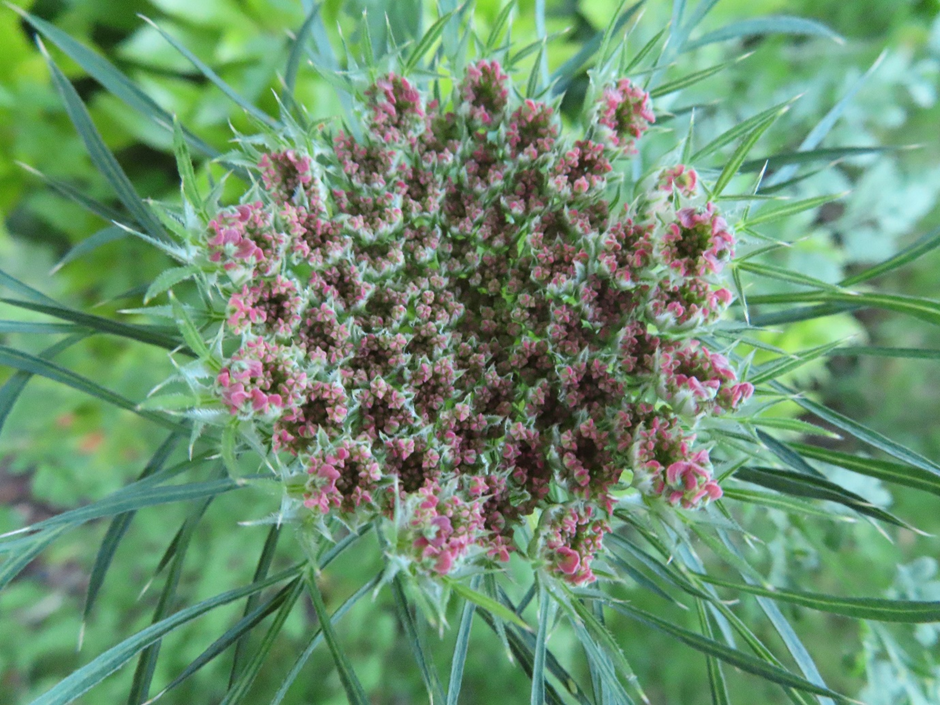 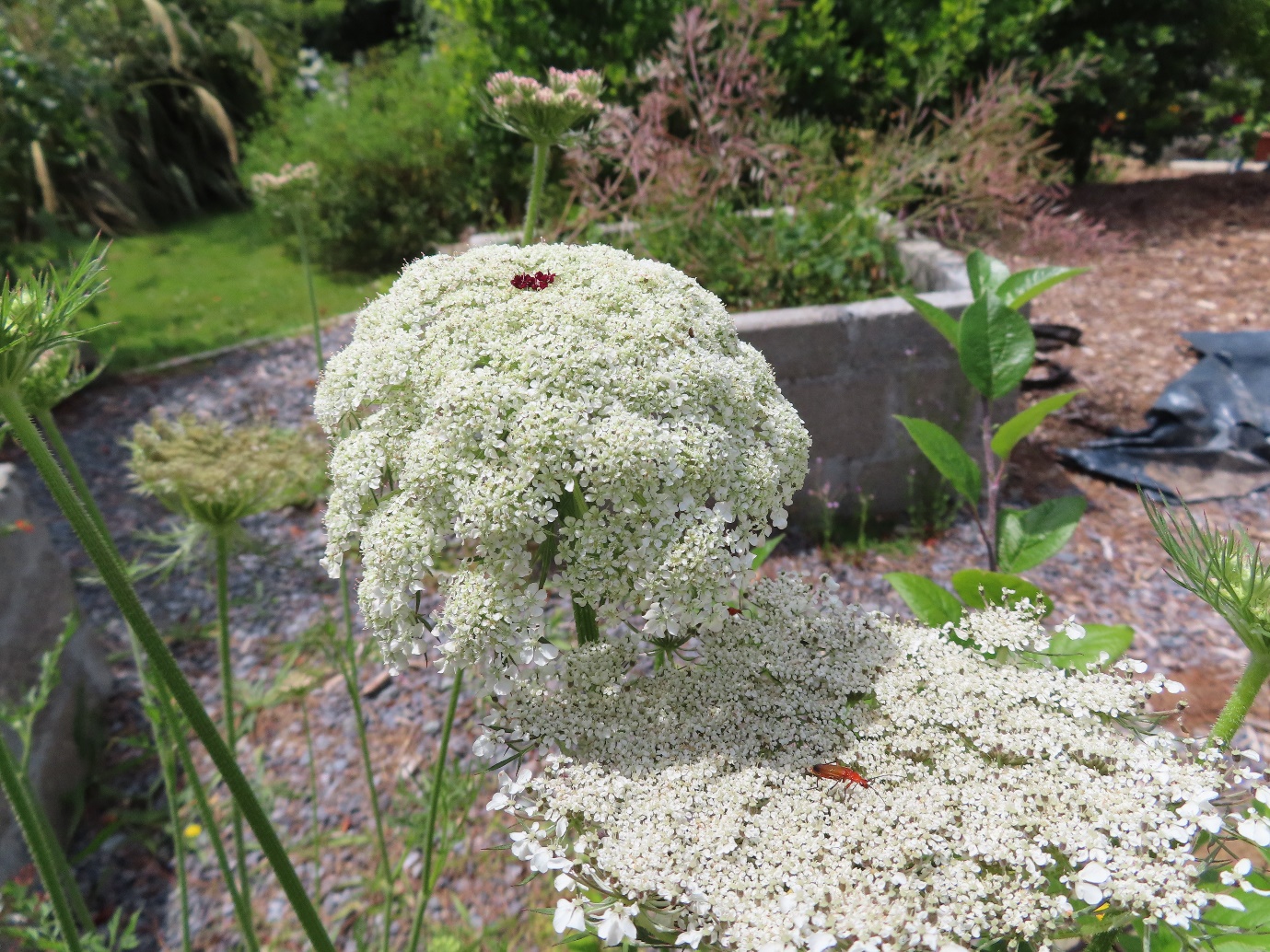 The Wild Carrot closely resembles the Sea Carrot but it has a central wine floret seen in the flower on the left above. Apparently, it is called Queen Anne’s Lace and the floret is said to  be the drop of blood from a lacemakers needle. Both plants are growing side by side in one of the flower beds and you can clearly tell them apart. The wild carrot has just one soldier ant on it sadly for them as they usually spend all of their time mating. 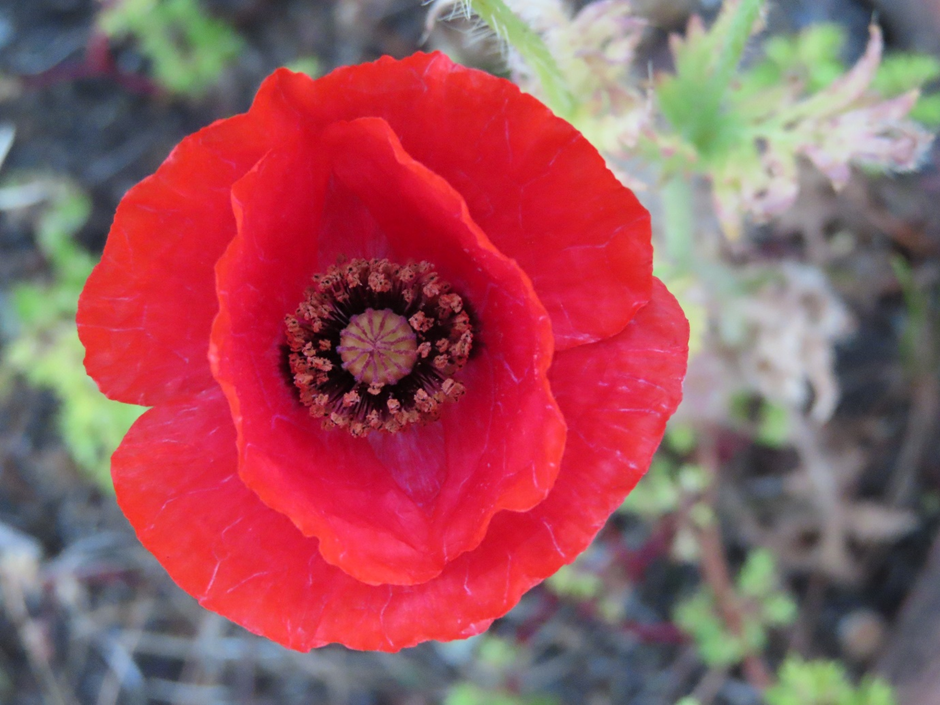 This single poppy appeared earlier this month and I assume that the seed comes from ones that I planted a few years ago. Sadly, the lovely purple poppy that appeared out of the blue some years ago has not turned up this year. I did keep some seeds but have had no luck with them. 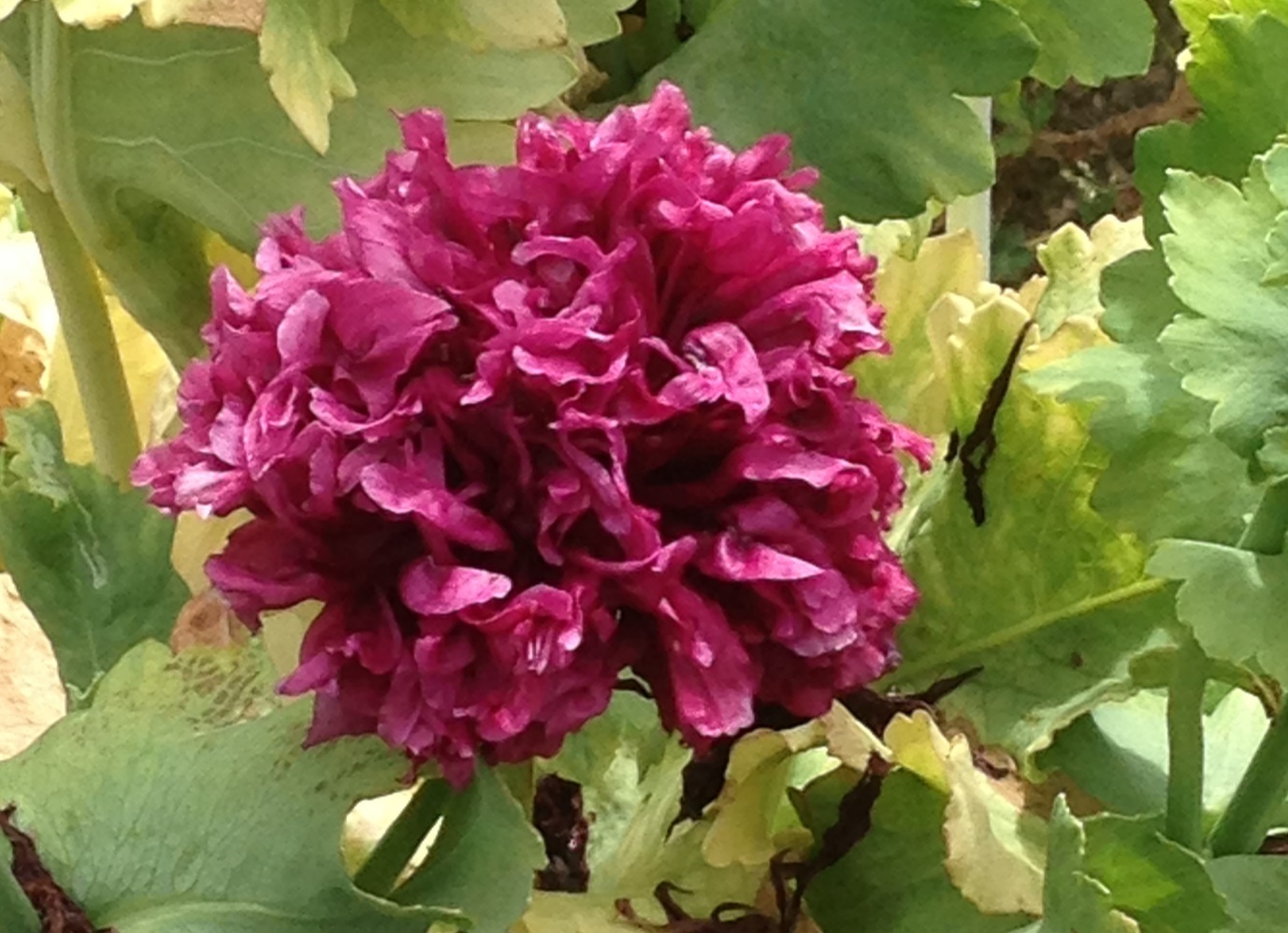 I presume that this is a cultivated poppy but as I never planted it I have no idea where it came from. 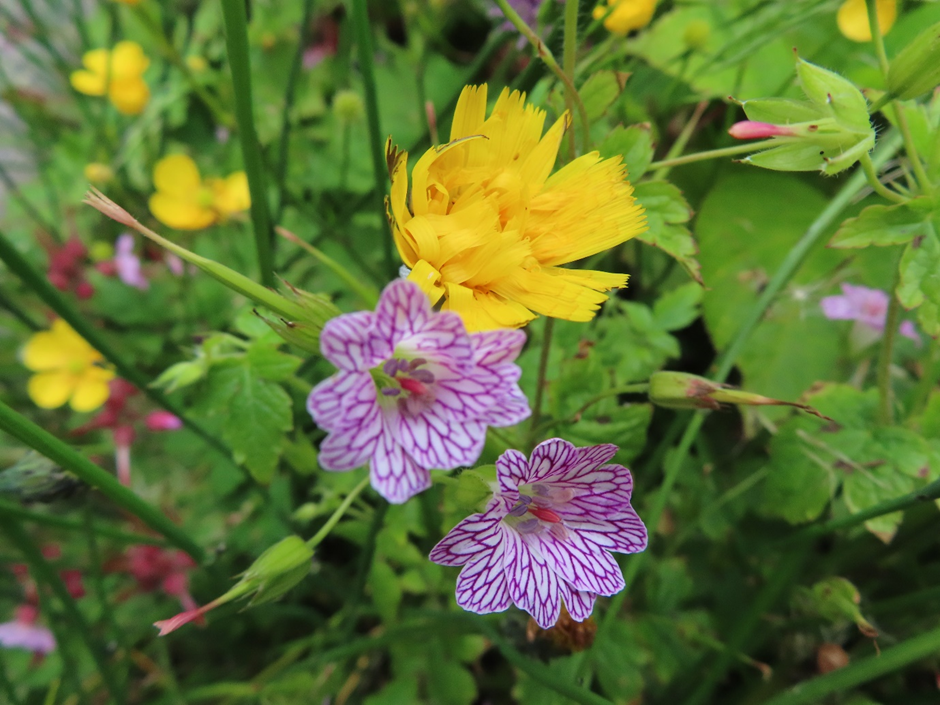 I continue to allow the wildflowers to seed at will and have decided that nature is a natural artist as evidenced by this combination of geranium and one of the many varieties of yellow wildflower that continue to confuse me. I have tried to deal with my ignorance by searching the internet and buying any book on wildflowers that I can source. The end result is similar to the effect that researching mushrooms has had on me. I swither between wanting to attend a definitive course to deciding that the description ‘the yellow one by the geraniums‘ will do. 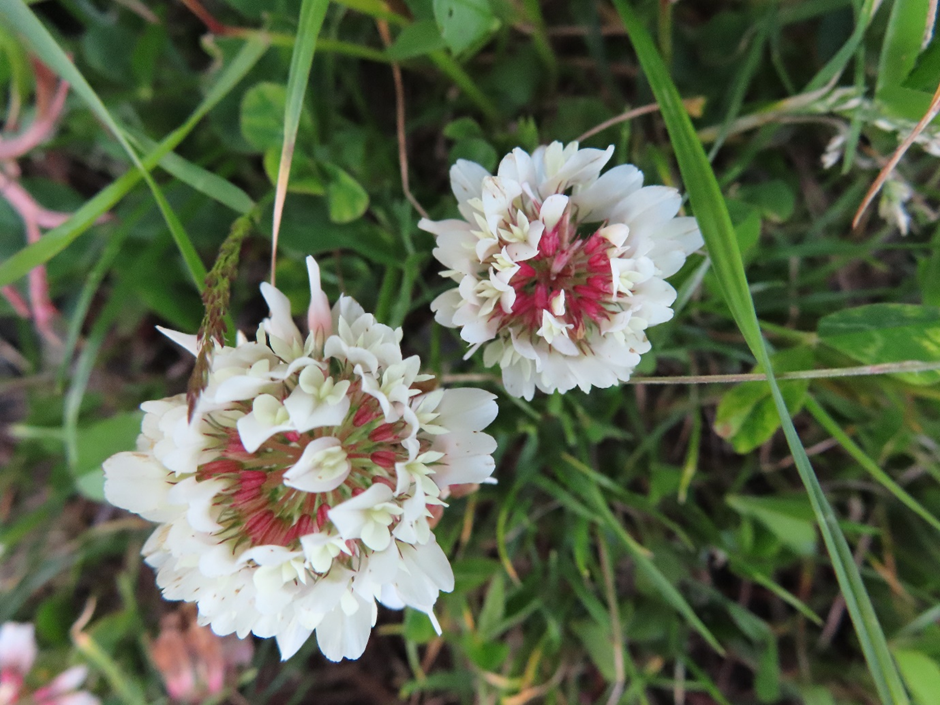 I am never sure why this clover is called white as I don’t think that it does justice to the beautiful colours that appear once it unfurls. Like most wildflowers in the garden they are always more than they seem and when I can identify them I am always impressed by their importance to the wildlife in the garden and to the garden itself.