A Benign But Dry September 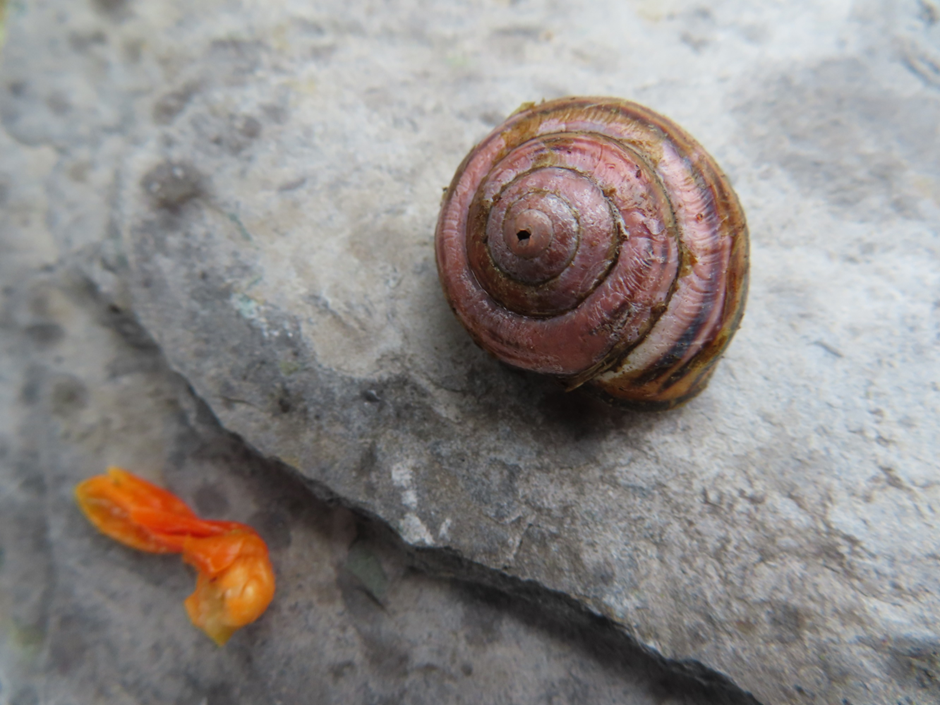 The nights are drawing in, but it is the changes in the wildlife that to me are the signal that winter is on the way. The goldfinches have started to return to the garden and I do hope that I have as large a flock as last year. The slugs are less evident although by now the damage is done. The first fox has just started its mating calls on the drive and Millie is exercising her vocal cords for the barking frenzy that is required to keep them at bay at night. Earlier in the year I saw five beautiful, healthy young fox cubs at the end of the driveway. If they have all survived I am in for a sleepless winter. 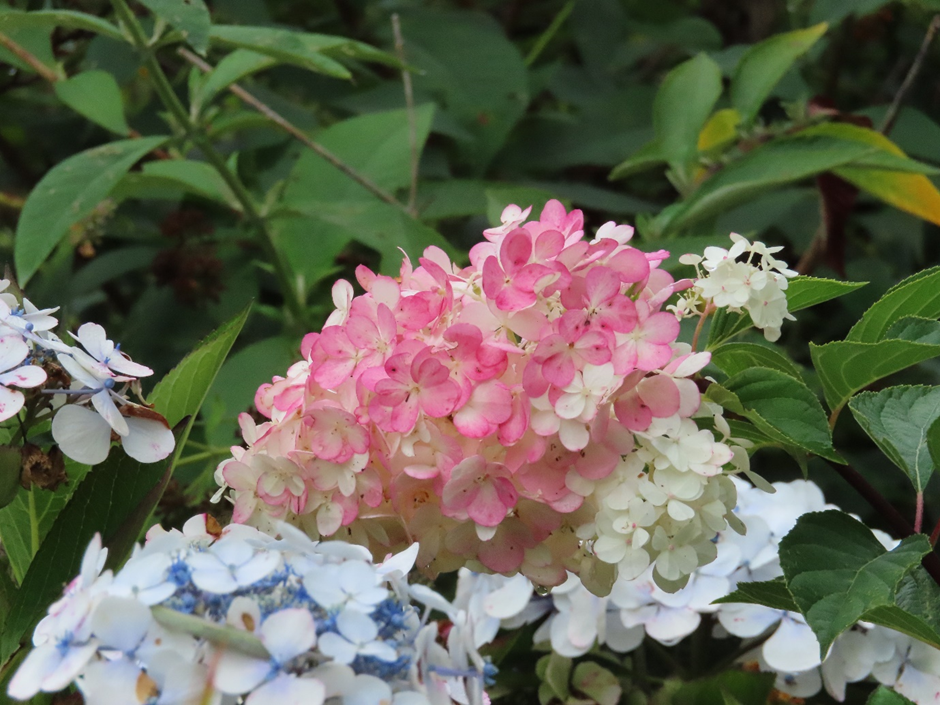 The wasps have continued to occupy my willow border and beyond, perhaps because of the prolonged good weather. While their numbers have reduced, the area is still out of bounds for me except for my minor incursions to fill the bird bath. This means that I can only enjoy this hydrangea from afar using my camera or binoculars and am unable to collect any blossoms for the house. Although the wasps completely ignore me, I would hate to evoke their wrath when it is thousands against one. 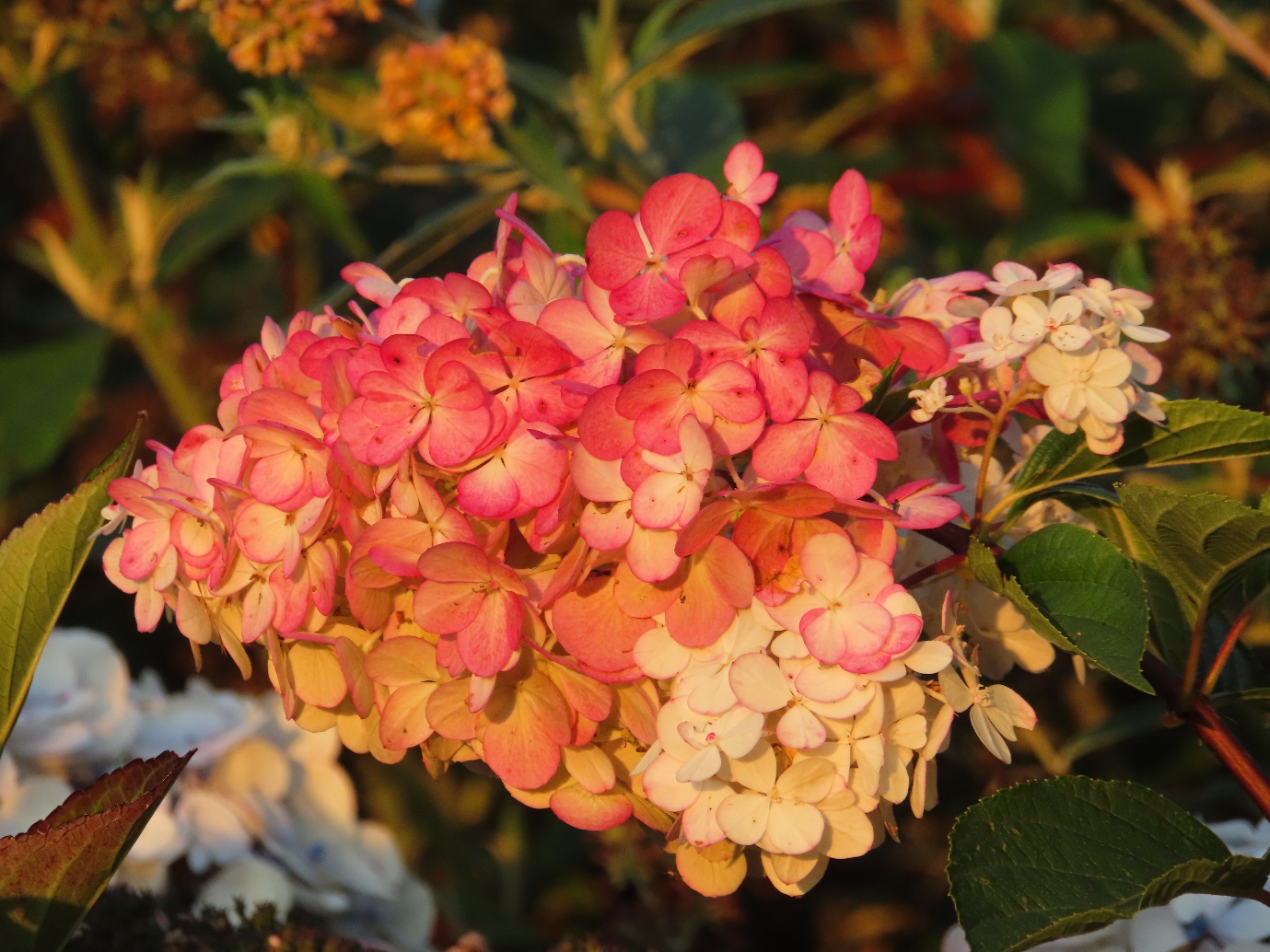 The setting sun on the same hydrangea. 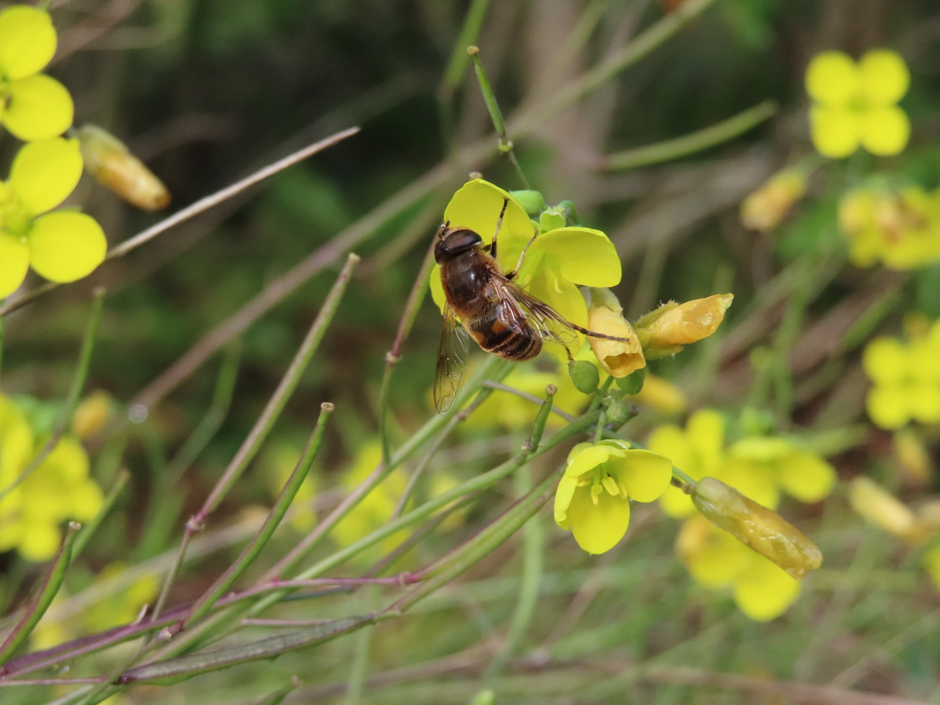 Recently the familiar hum of ‘wasps’ extended to the washing line and I was considering extending my ‘no fly zone’ when I realised that the loud noise was from bumble, honey bees and hoverflies. These have been attracted by the Heather, the flowers of the salad Rocket, Thyme and Marjoram. I think the honey bees belong to a neighbour and I get a kick out of the idea that my garden is contributing to their wellbeing. I would imagine that the honey is going to taste even better now that I know this. 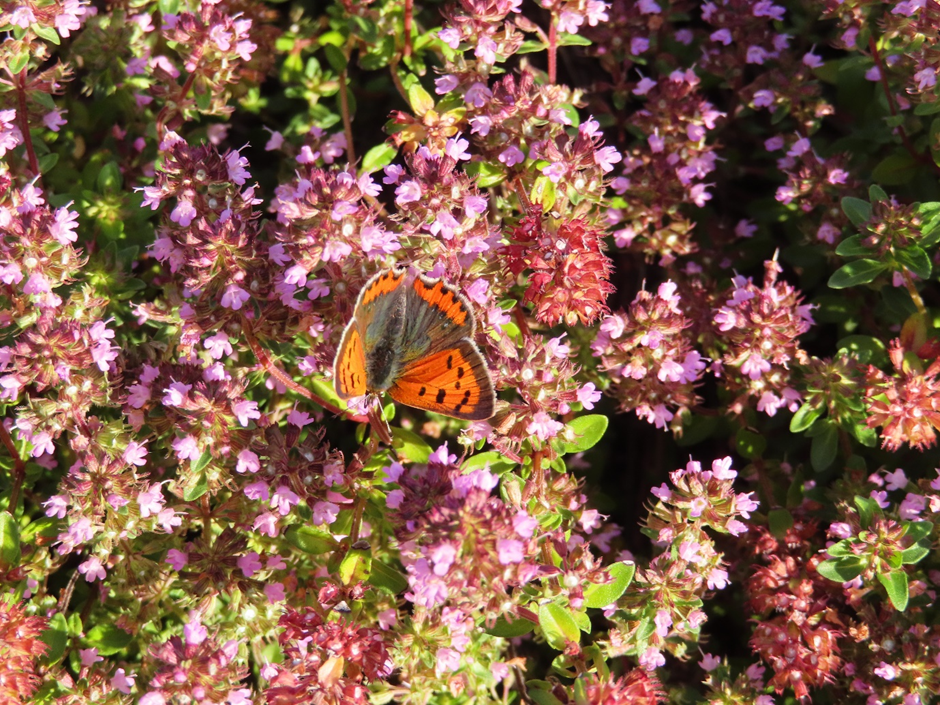 This Small Copper butterfly evaded me for days as it moved between the Marjoram flowers at the side of the house and the bank at the back. It may be advancing age but I am rarely quick enough to get a good photograph of butterflies or birds. However, it is good to know that the long flowering herbs provided food well into September. I am compiling a list of flowering plants that can provide food once the Buddleia are finished. Marjoram, Oregano and Thyme are now at the top of the list. 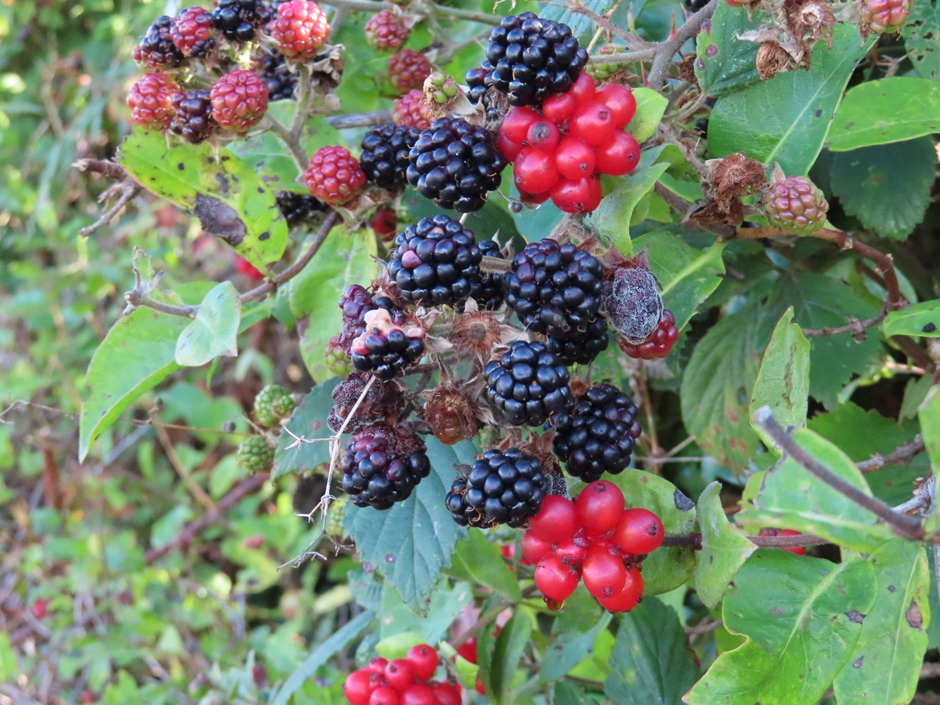 It has been a very good year for brambles – here shown growing close to honeysuckle berries. Brambles are not my favourite fruit so I did not pick any for my own use. As most honeysuckle berries can be poisonous this paring could be problematic. Sadly, despite a large crop of elderberry flowers I did not have even one berry on any of my trees so I was unable to make any cordial. I am tempted to blame the blackbirds although they usually leave evidence to let me know that they have been active so perhaps for once they are innocent. 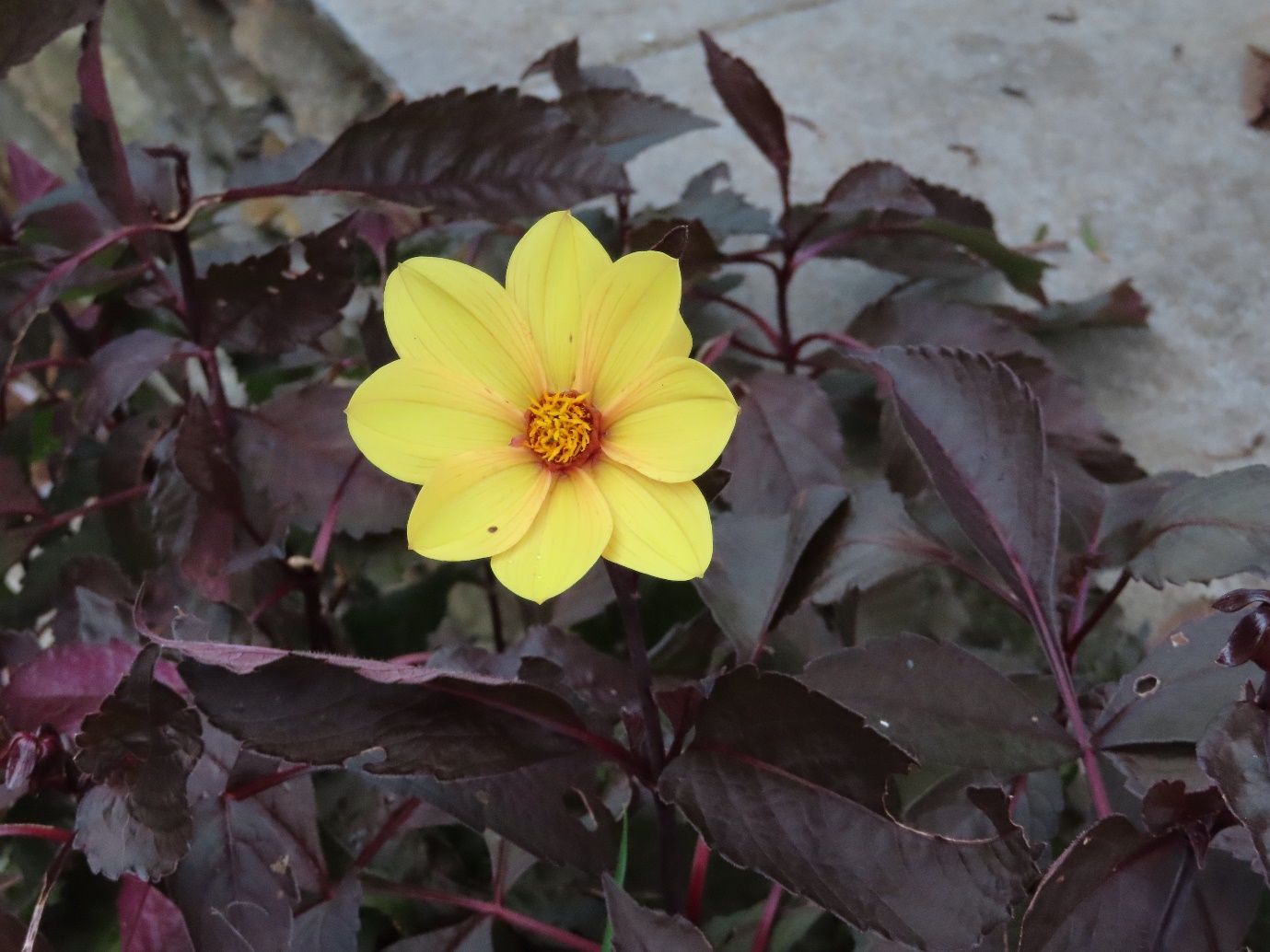 I have never understood the attraction of Dahlias despite their popularity. This variety was given to me by a neighbour and has done well despite my neglect. As it has been attracting a lot of bees and is currently producing a series of flowers when everything else is fading it has now been added to my list of acceptable plants. I might even add to my collection. 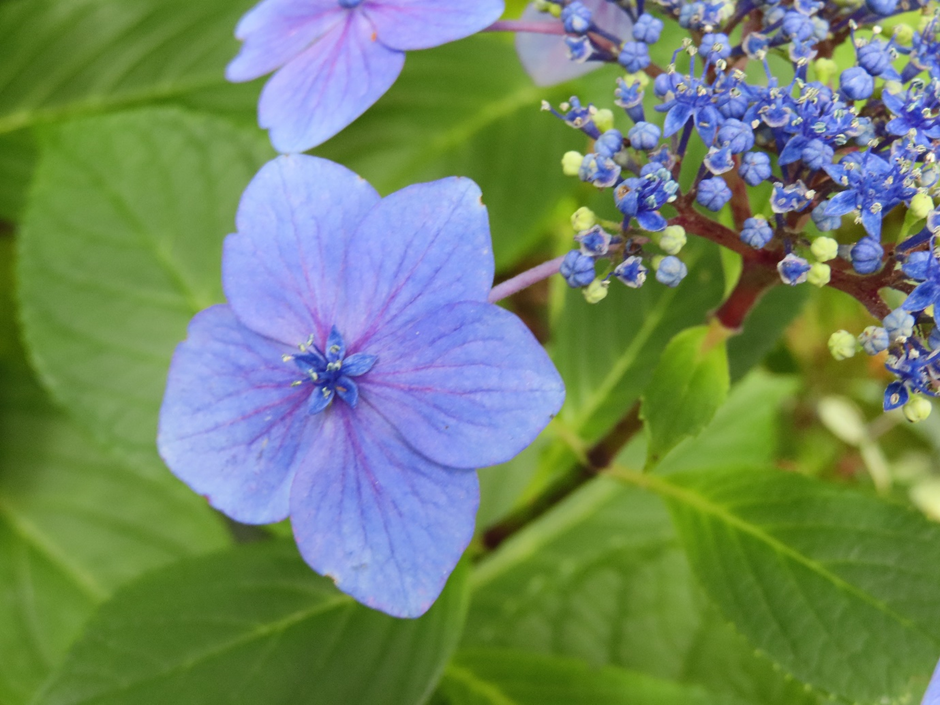 Some of my hydrangeas have revived and are producing fresh petals or full flower heads. I consider this somewhat of a miracle as they have had almost no water for months. I was convinced that at least three Madam Moulier had died and cut them back to the ground. With the usual resilience of most plants, they are already producing new buds and have my undying respect.. 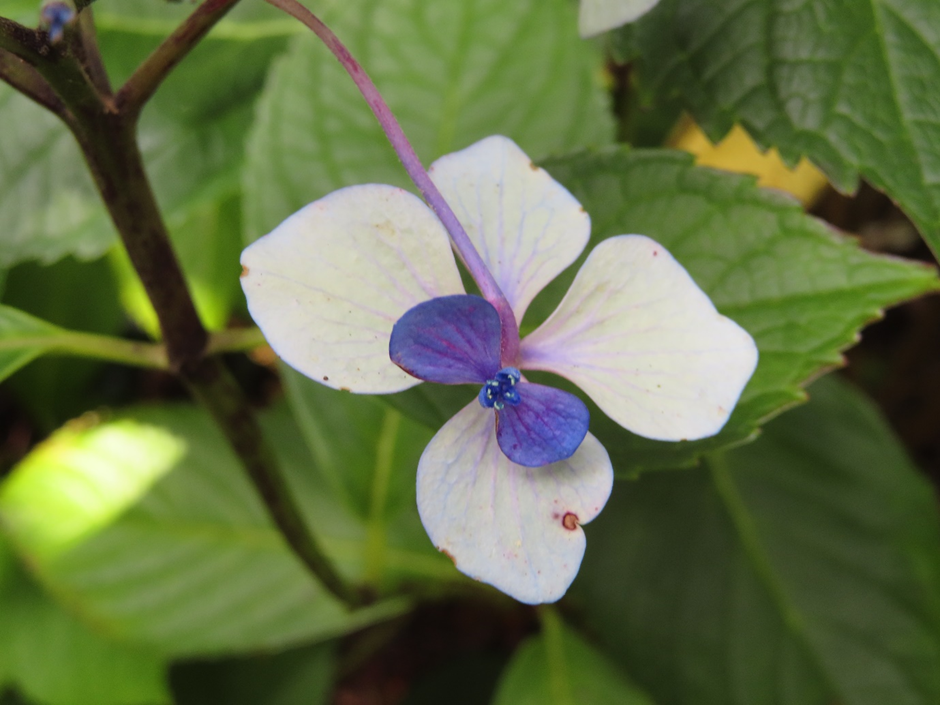 This lovely creation has occurred because the hydrangea petals have turned upside down to reveal a tiny set of petals on the underside. 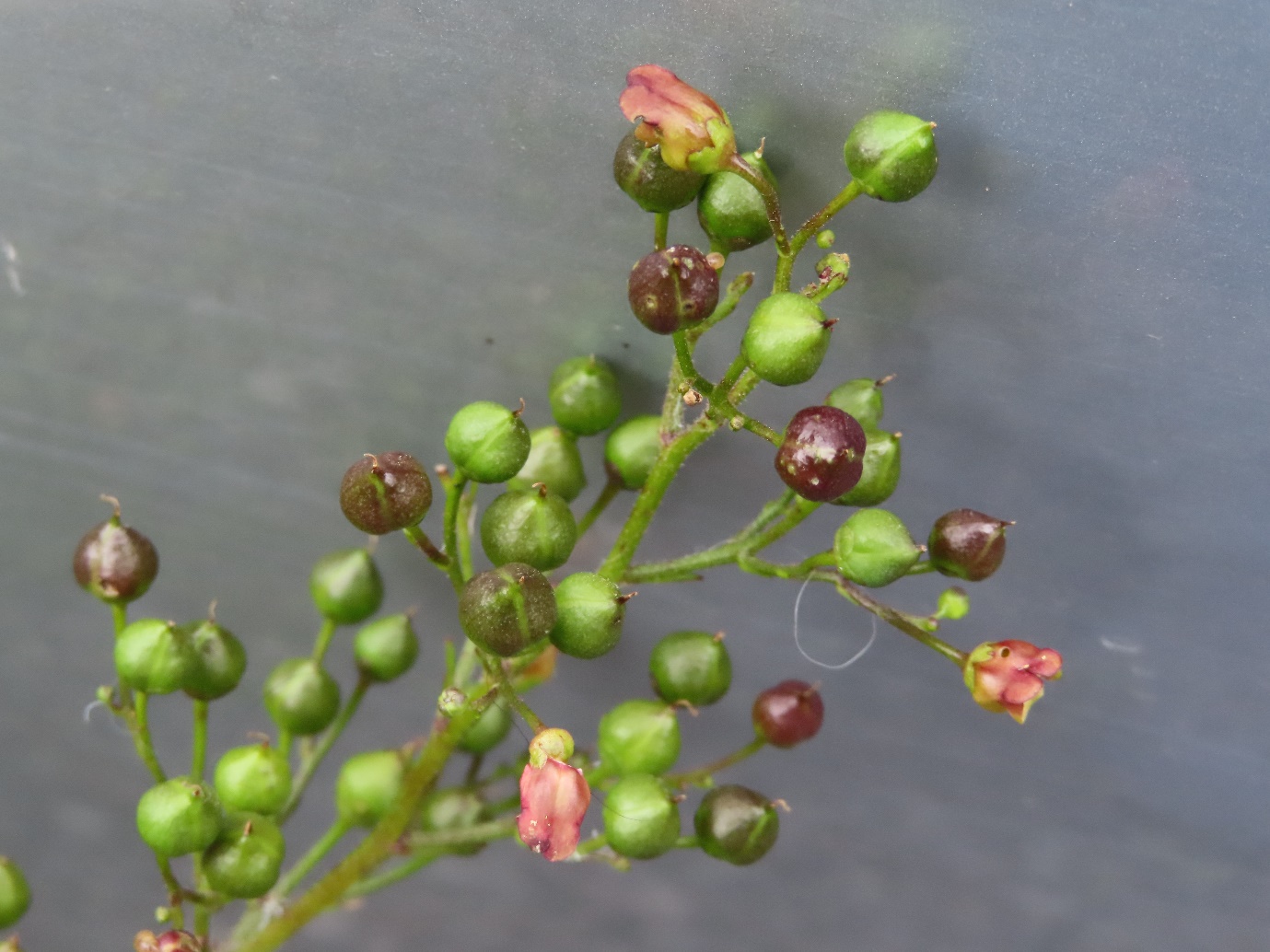 It never fails to amaze me that wildflowers seem to survive all that is thrown at them. I have yet to see one suffer from the salt laden winds that blacken my expensive shrubs. Despite their shallow roots they have all weathered the long drought this year. I think that this is a form of figwort which has been thriving in the gravel in the sun despite preferring shade. I always think that the flower looks like an orchid and wonder if they are related. 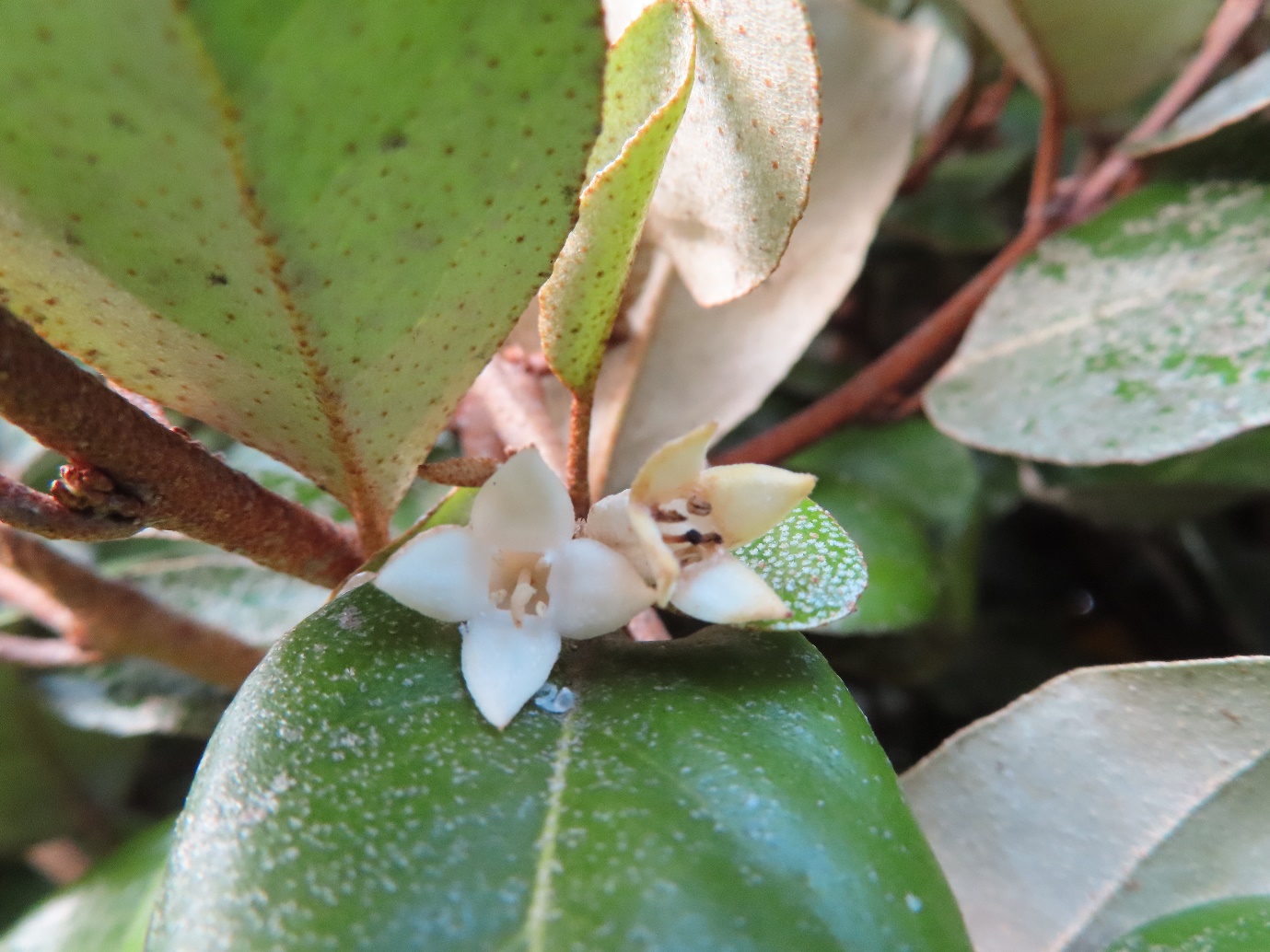 I planted Eleagnus as part of my windbreak when I moved to this garden and after a few hiccups in the first year or two they settled in well. They also have the advantage of doing well under conifers and I was able to fill the gaps between three or four large trees on the drive so that I could walk there without being blown away on a regular basis. What is not advertised as much as it should be is the scent that fills the evening air at this time of the year from the almost invisible flowers. It is hard to imagine that such tiny flowers can have produce such a lovely fragrance. 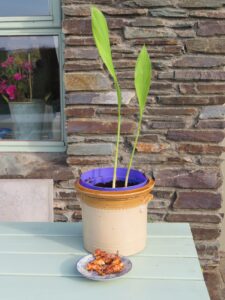 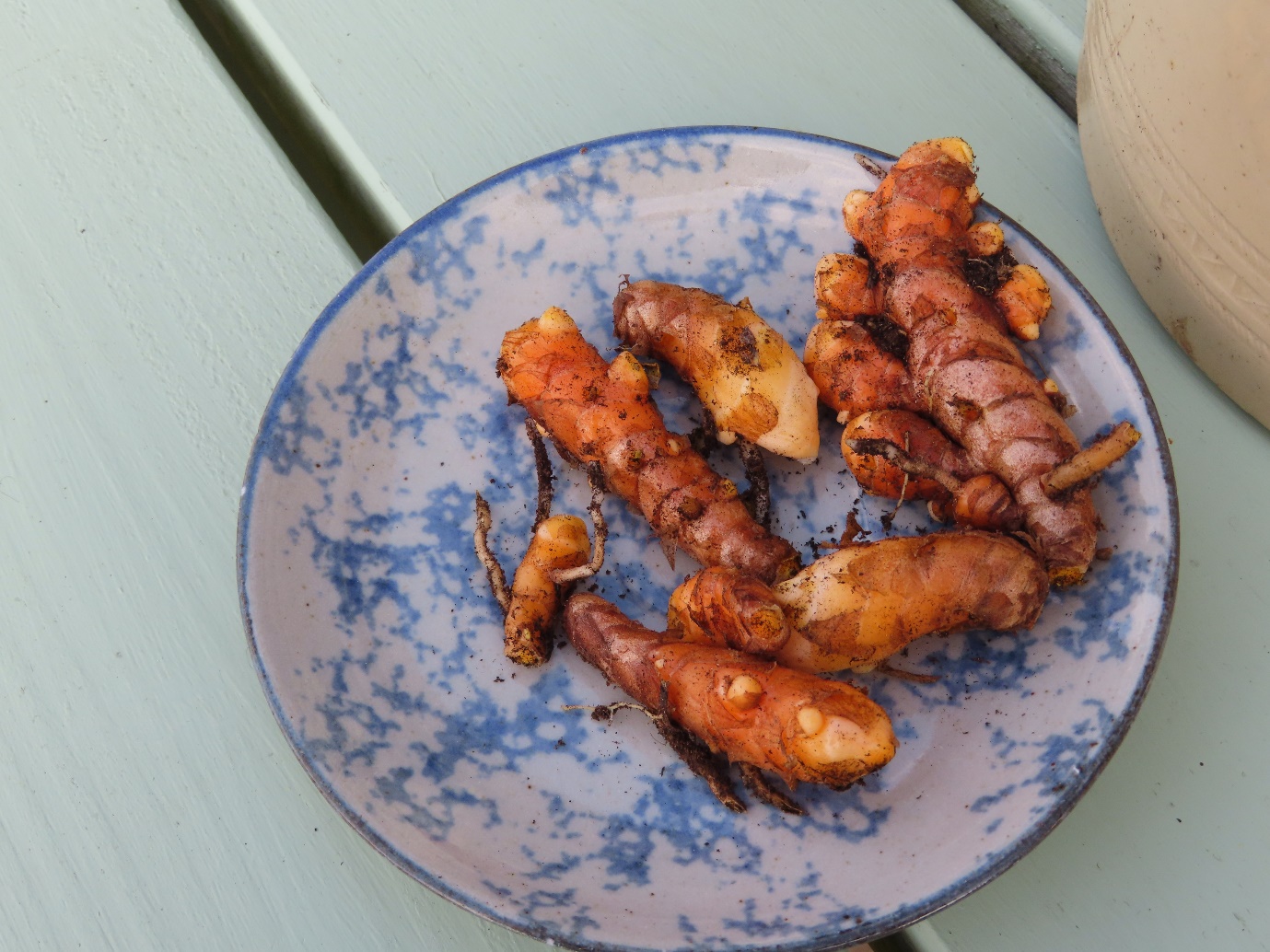 These two photos may not look much but they document the unexpected success of my Turmeric. This was first grown from a shop bought tuber two years ago and this is now the second generation of plants all taken from the first. They thrive in my sunny kitchen and seem to require little attention. I now ‘harvest’ a crop every couple of months and plant a new rooted tuber each time just ‘to be on the safe side’. This turmeric has a more delicate flavour than the tubers that I used to buy and is moist and crunchy when eaten shortly after it is harvested. I much prefer it to the hard tubers in the shops and hope to continue to produce it for my ginger, turmeric, honey and sage drink that I use after my winter swims. I had a short lived success with ginger and am going to give it a second try. 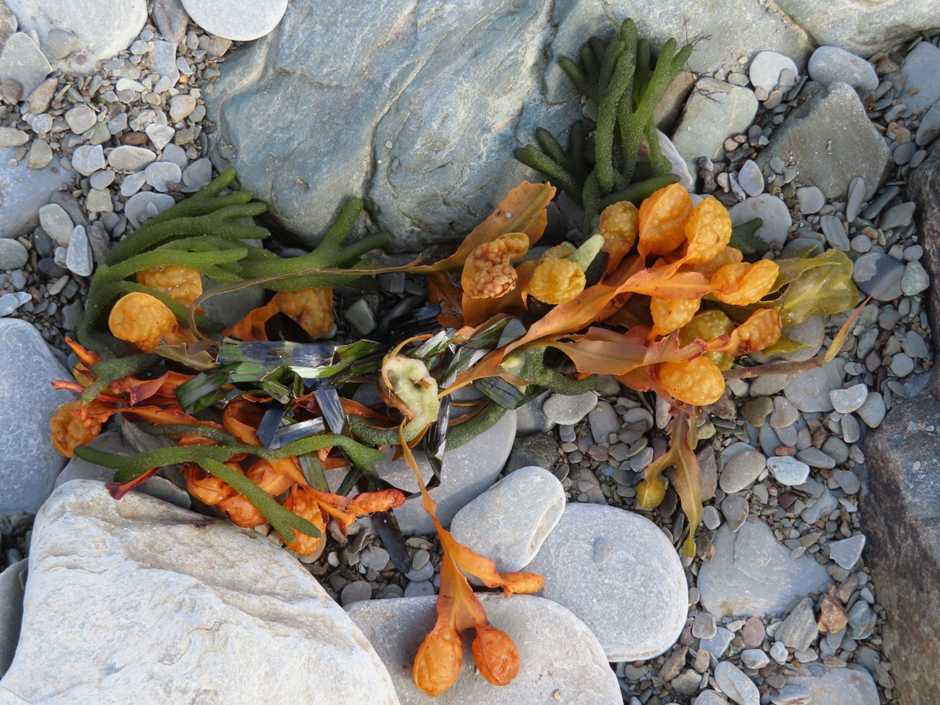 At this time of the year, I find myself paying more attention to the colours in the little cove close to the house. The variety and colours of the seaweed is more than compensation for the dulling of the garden as Winter approaches.