I have finally weaned the birds off their daily ration of bird food. It was easier than I thought. All I had to do was substitute the sunflower hearts I was providing with the cheaper mixed food and they showed their disdain by ignoring all but the sunflower seeds. I miss the morning ritual and the enthusiastic greeting but in reality, there is plenty of food in the garden despite the low temperatures. I became aware of another source of food the other day. The older part of my house is faced in stone with narrow ledges. The extension is faced with a more open semi-dry stone wall. The other day I watched in amazement as two goldfinches climbed one gable wall from the ground to the apex of the house, pecking at the cavities as they went. The next day they covered the other gable and have been back on more than one occasion to mine the insects that must live in the walls. I had been told that the wall would be perfect for spiders and insects but I did not realise the significance of this until now. I am sure that the pair are nesting nearby as they are in the garden for much of the day. 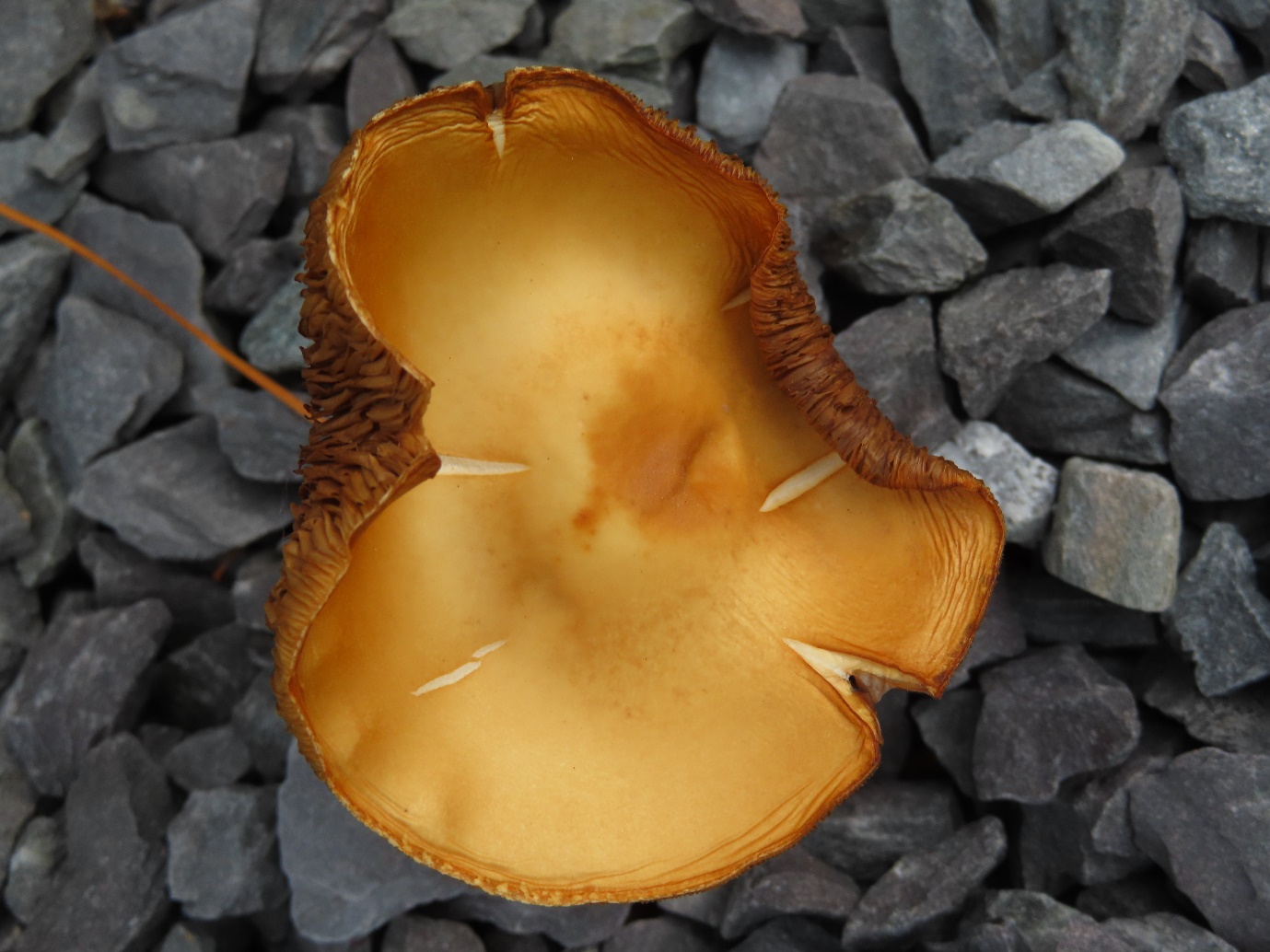 I finally managed to put gravel in the area around the house. It took me just nine years to do so. Apart from cost, I was reluctant to disturb the wild flowers that grow in profusion in the area and provide a burst of colour all summer long. I was interested to see what wild flowers, if any, would appear first. It turned out to be dandelions despite the fact that I have had very few growing in the garden. For some reason they seem to be very much at home in the dry soilless area. The second and more surprising arrivals were mushrooms. The above photograph is of one of them in its last stage before it shrivelled and died. It is a lovely addition to the area and is a reminder that gardening is always full of surprises. 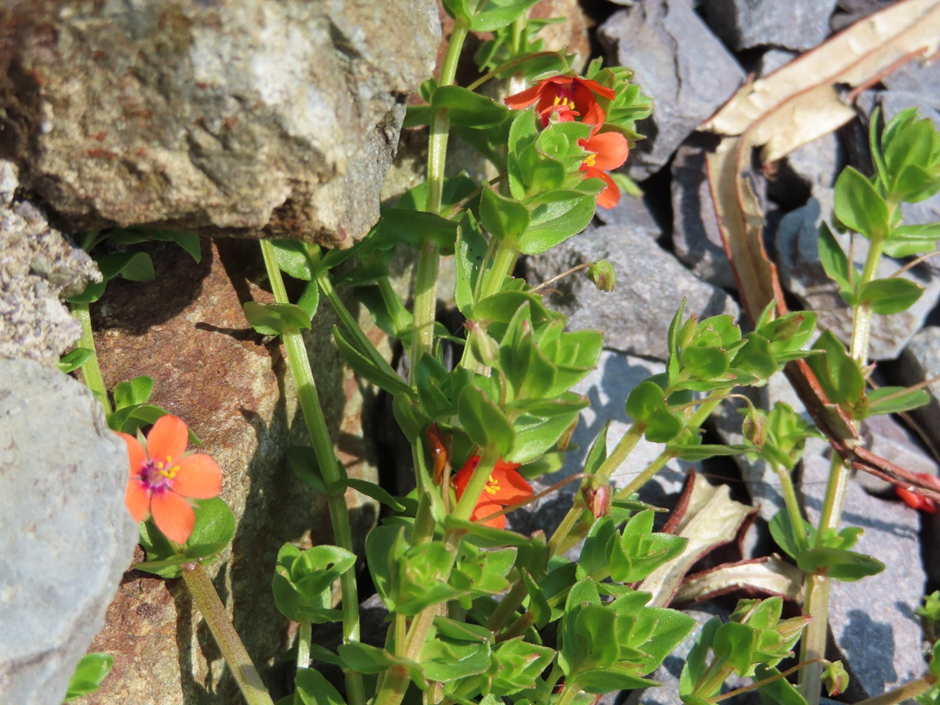 Scarlet Pimpernel thriving on the gravel

I was rather worried that I would lose some of the wildflowers that previously covered the area but each day there are new arrivals. Silverweed, Scarlet Pimpernel, Common Ramping Fumitory, Spurge and Herb Robert are just a few that have returned this year so far and I am sure that there will be more. 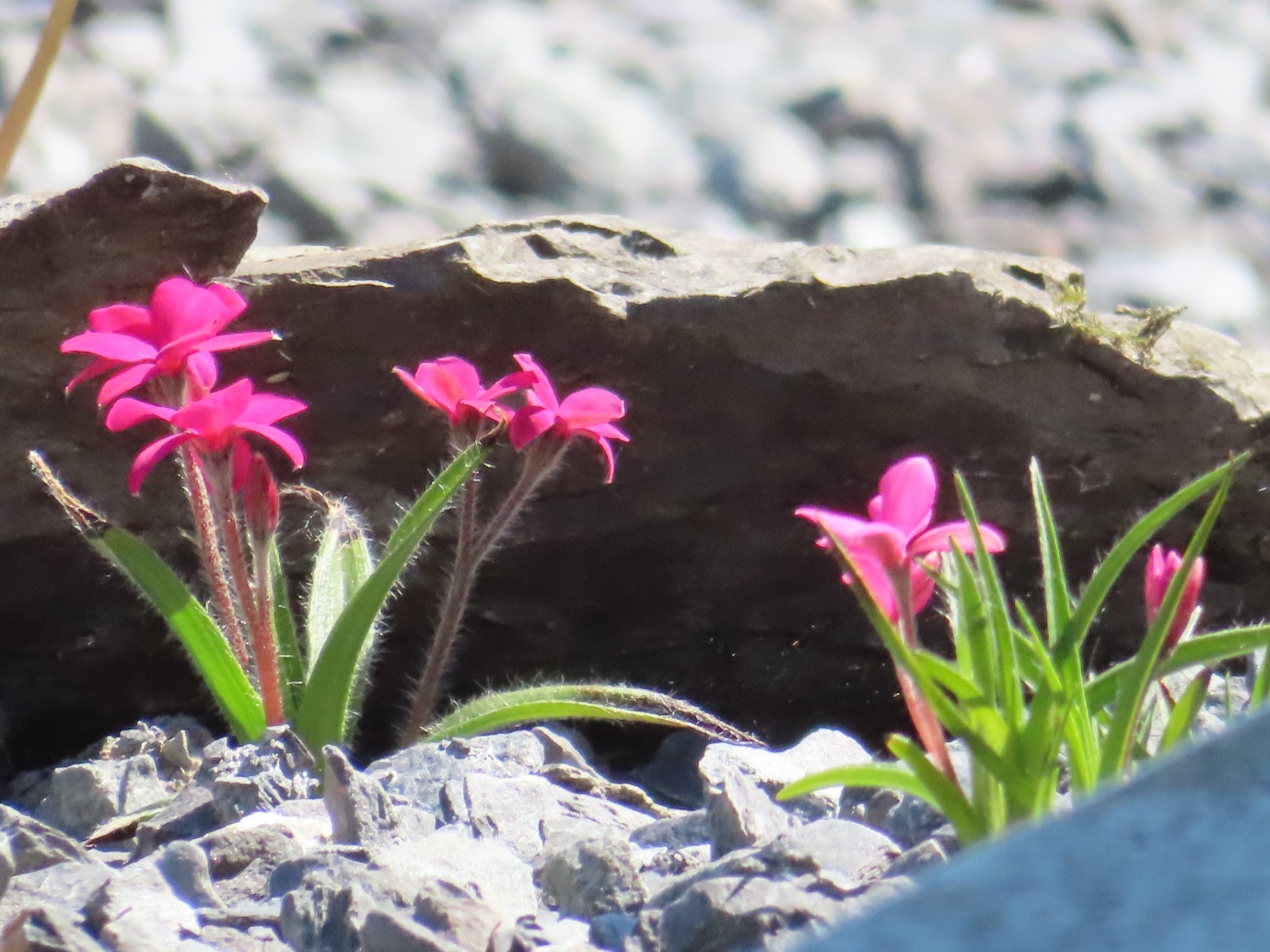 Having spent money on gravelling the area behind the house I am now spending money trying to cover it up. Each day when I dig a new area for planting, I end up with a large number of stones. Most of them have been used in the walls around the garden, but a new pile is gradually building up by the garage. Many of these stones have lovely shapes and colours so it seemed a pity to hide them in a wall. I am using some of the plants that do well here such as Golden Oregano and am hoping that Creeping Thyme will do better than its larger relative. I am allowing small to medium wildflowers to grow alongside the more cultivated varieties and it will be interesting to see which does better. 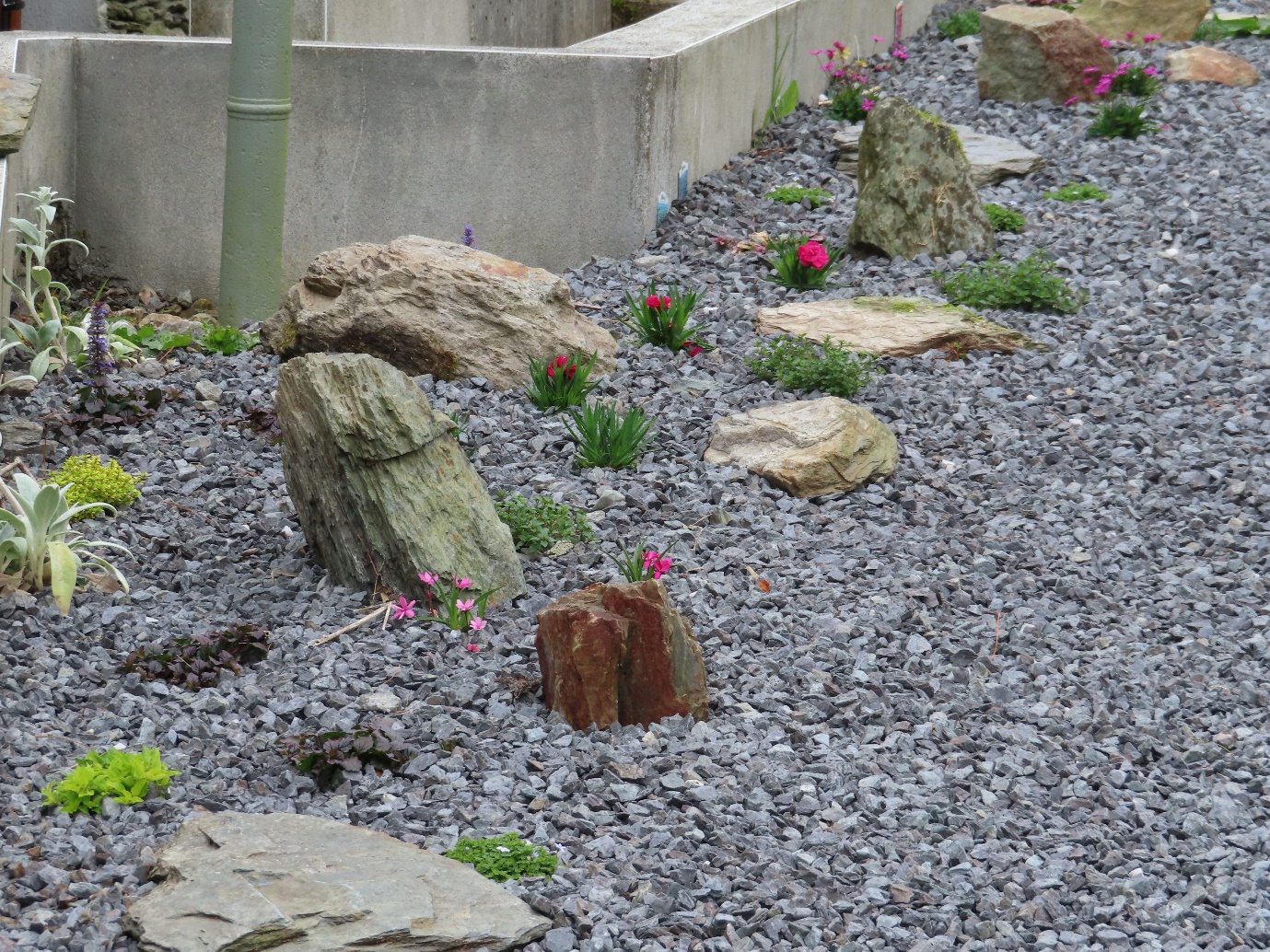 This bee was so engrossed in feeding on a Phacelia that I was able to get a clear photograph for a change. 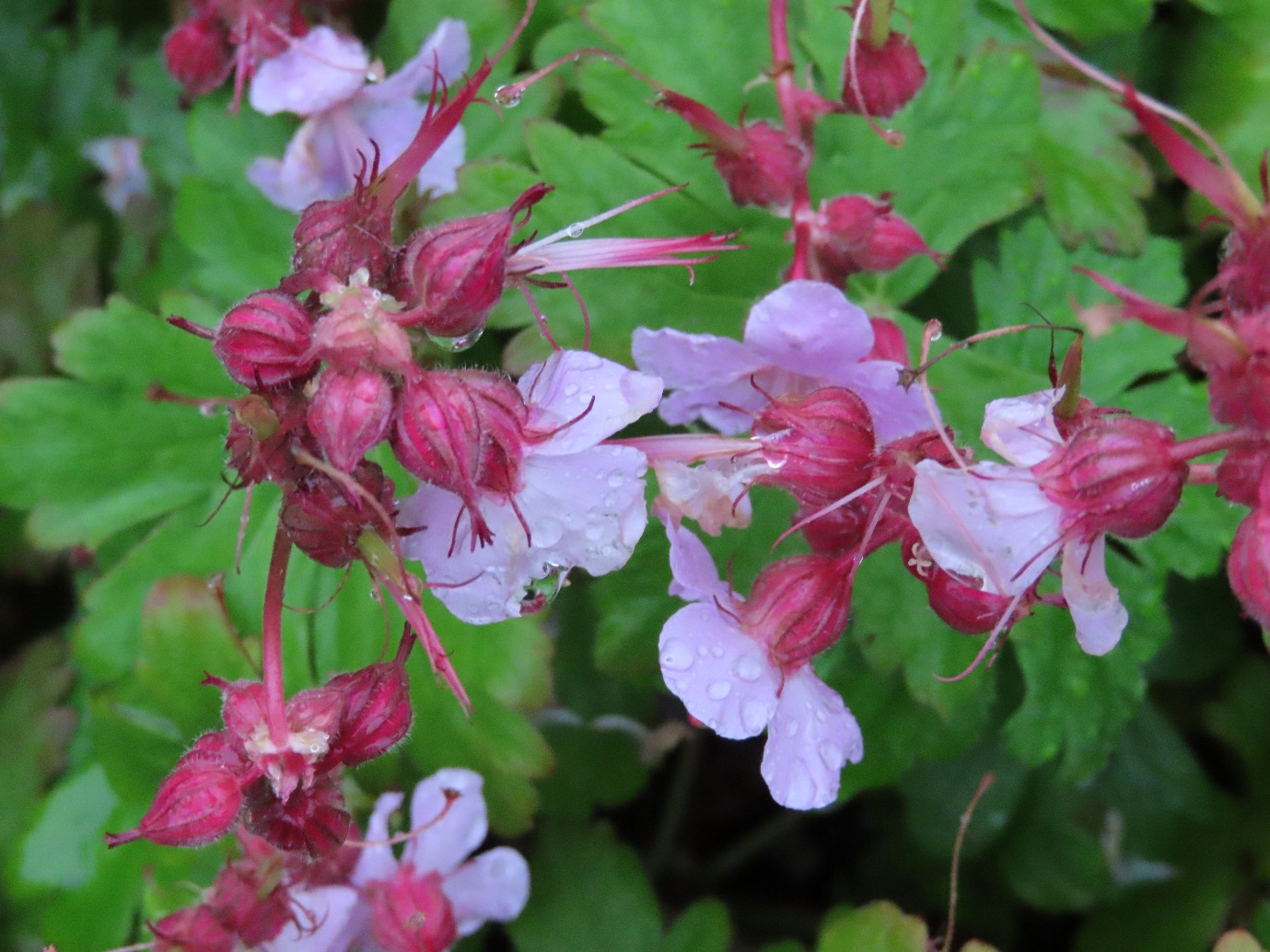 I am unsure of the name of this geranium as it is many years since I bought it. It is by far the most popular one with the bees and the plant is usually covered with them.

The flowers on the various berberis have just about run their course and the bees are now moving on to the flowers in the garden. Geraniums are one of their favourites, along with the catmint ‘six hills giant’ which will provide food until well into the autumn. The foxgloves are also a firm favourite and it is amusing to watch the bumble bees disappear as they forage for nectar. 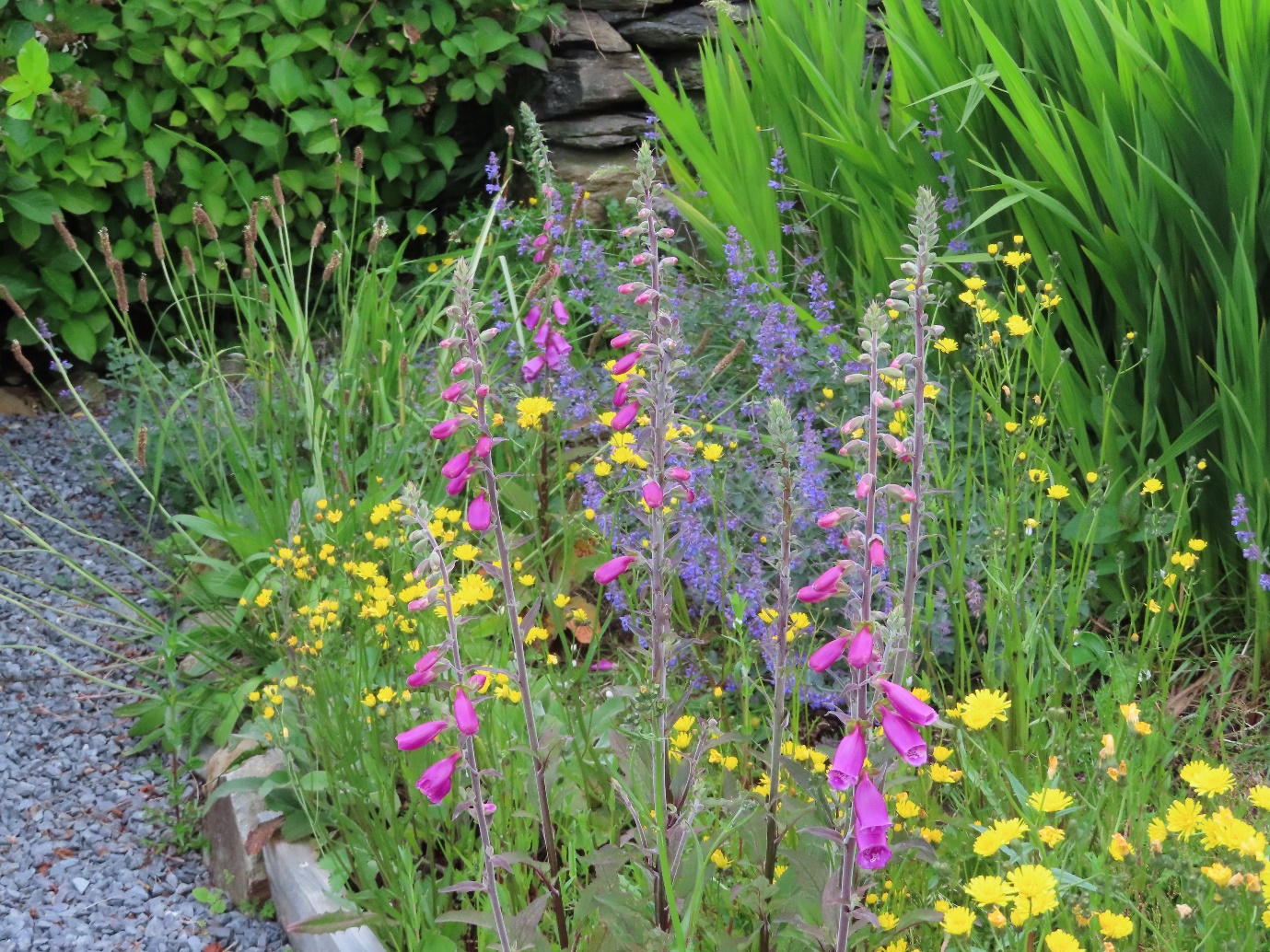 A corner of the small vegetable garden that is resting this year with foxgloves and catmint providing ‘haute’ cuisine for the bees.

The endless and late storms and cold weather have taken a toll on the garden. I think that I have lost a mature Italian alder which has found the strain of producing two sets of leaves a year too much for it. It has always acted as a buffer from the salty winds for its companions so I will have to see how I can replace it to ensure that they don’t suffer the same fate. I have four varieties of buddleia in the garden and take cuttings on a regular basis. They have done very well until now but after the late frosts a number are dead. This seems to be regardless of variety. 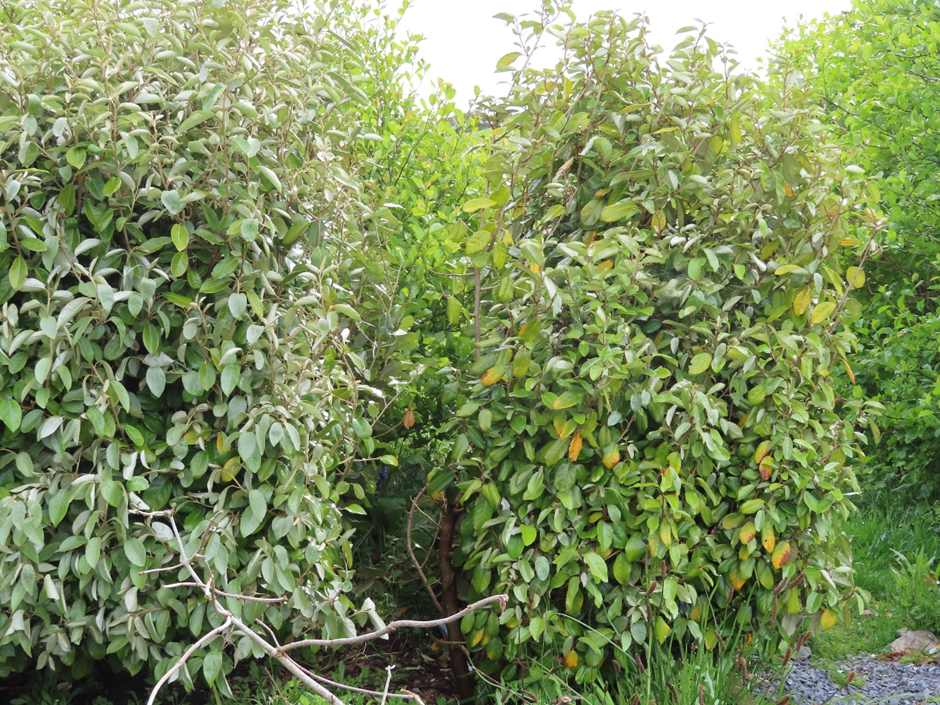 There have also been a number of strange occurrences. The hedge in the photograph above was planted to provide a wind break in the small vegetable garden. Just recently it has developed this gap which is due to the end shrub tilting towards the south. I am still trying to understand how this happened as everything else in the area is intact. 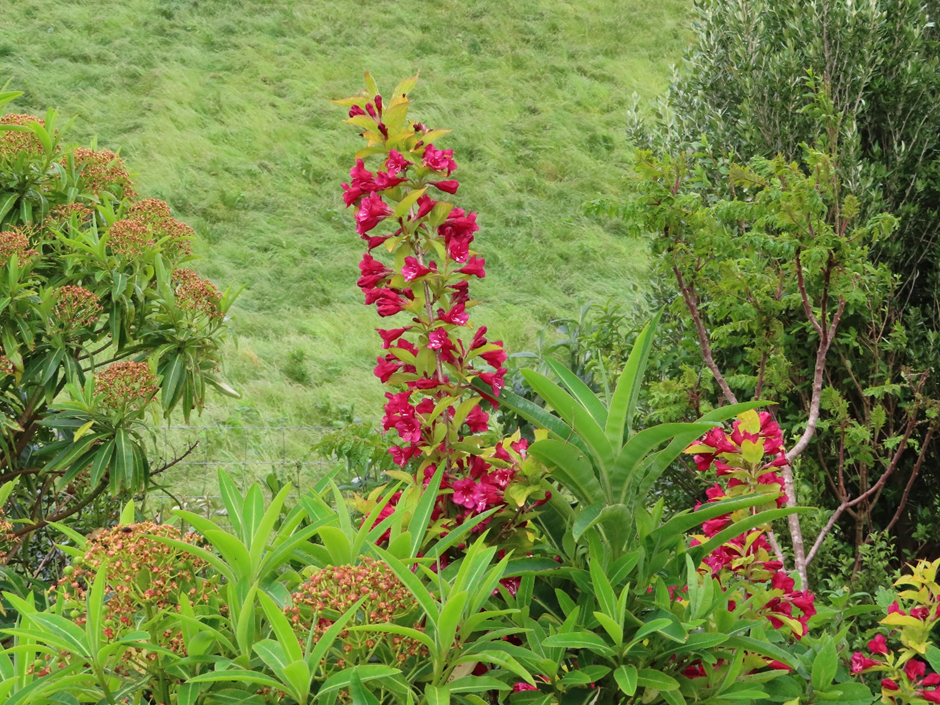 The photograph above was taken in the south west corner of the hillside garden. In general, this is now a well-protected area and plants thrive in the shelter and sunshine. Until a few weeks ago the area behind the Weigelia was full of dense shrubs. Now there is a ’bare’ strip of shrubbery about forty feet long and ten feet wide. At least three of the shrubs in my original planting have been uprooted and more are dead. It is a complete puzzle as the area looks as if someone drove a tractor through it. This means that I cannot blame the dogs although they do their fair share of digging and uprooting. 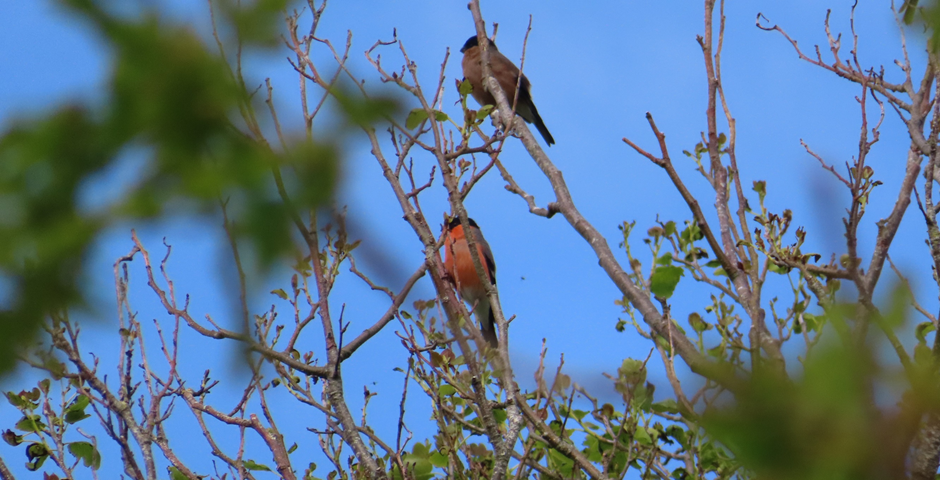 Last year I mistakenly thought that I had a bullfinch in the garden but it turned out to be a deeply coloured chaffinch. A few days ago, I had a visit from a keen birdwatcher. As we sat in the sunshine ,we were entertained by this pair who are obviously nesting nearby. They were joined in their song by a pair of singing thrushes and a blackbird. All love the bare tops of the Italian Alder and sing for hours. I am nearly always delighted when it looks as if my planting is providing food and shelter for creatures of all types. I say nearly because the other good news is that my clematis has made a full recovery now that the three mice are out of the way. When you look at the picture below it is hard to believe that these three were eating four plants down to the bare branches for over a year. I do hope that the next inhabitants of the wall have a more conventional diet. 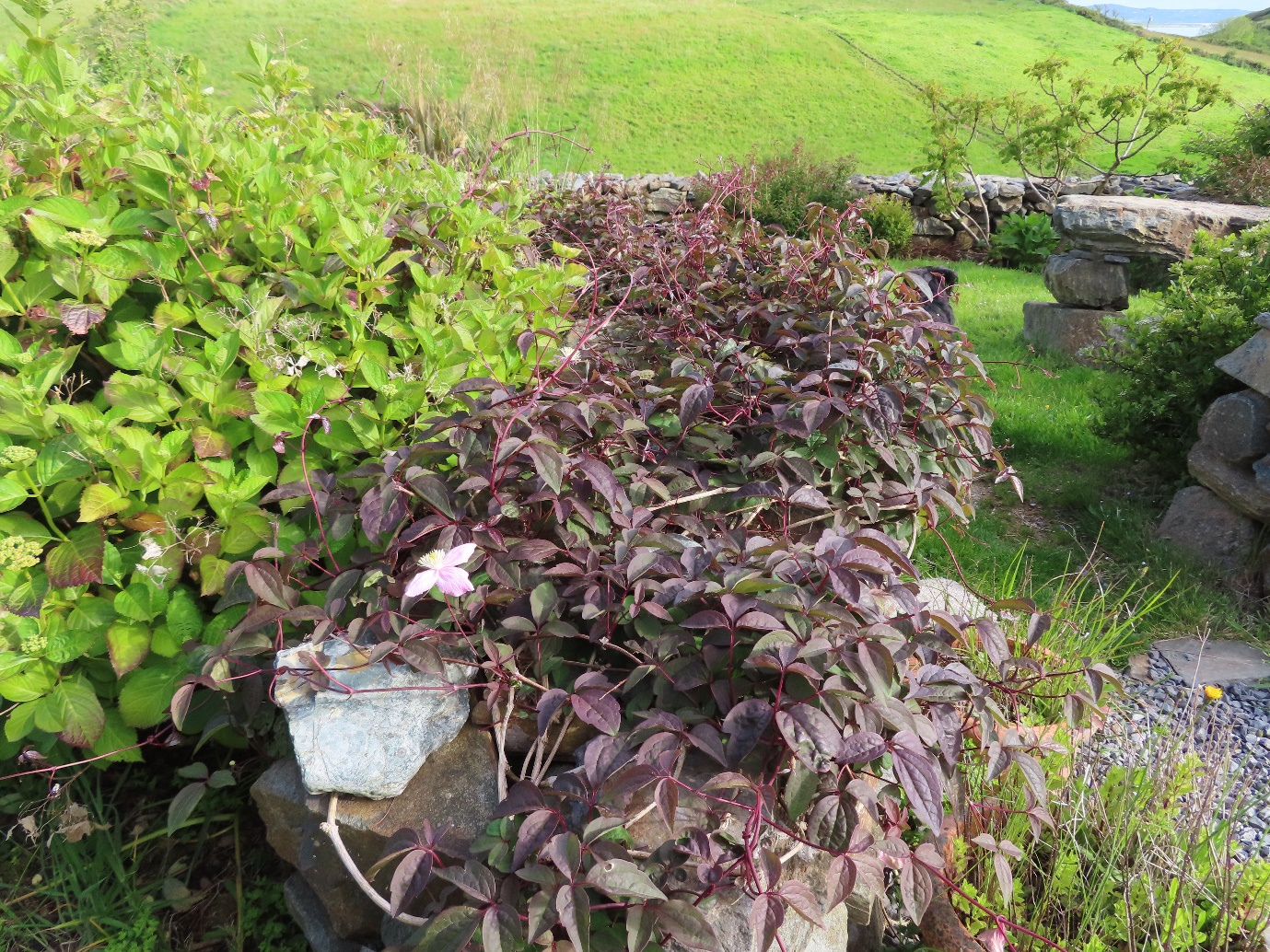