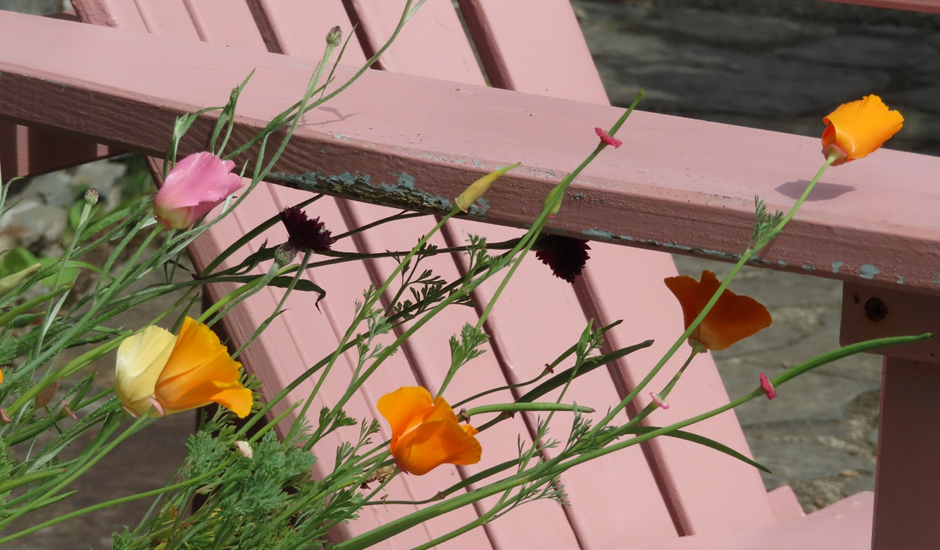 Autumn has arrived with a bang. With two bangs actually – in the shape of storms Ellen and Francis both rated orange and both bringing a deluge of rain. With the usual contradictions in this garden, much of it has been decimated by the wind and salt while some areas and plants seem unharmed. For a few days I got my wish to have a pond, but as it was in the middle of the main path through the garden it was not very practical. The poppies (see above) were one of the first casualties. I would have thought that they were relatively sheltered but apparently not. Fifty feet away in a more exposed position I had planted some poppy seeds that I found late in the season. They had just started to flower and I had no hope for their survival. Incredibly they seem untouched and continue to produce new flowers each day. 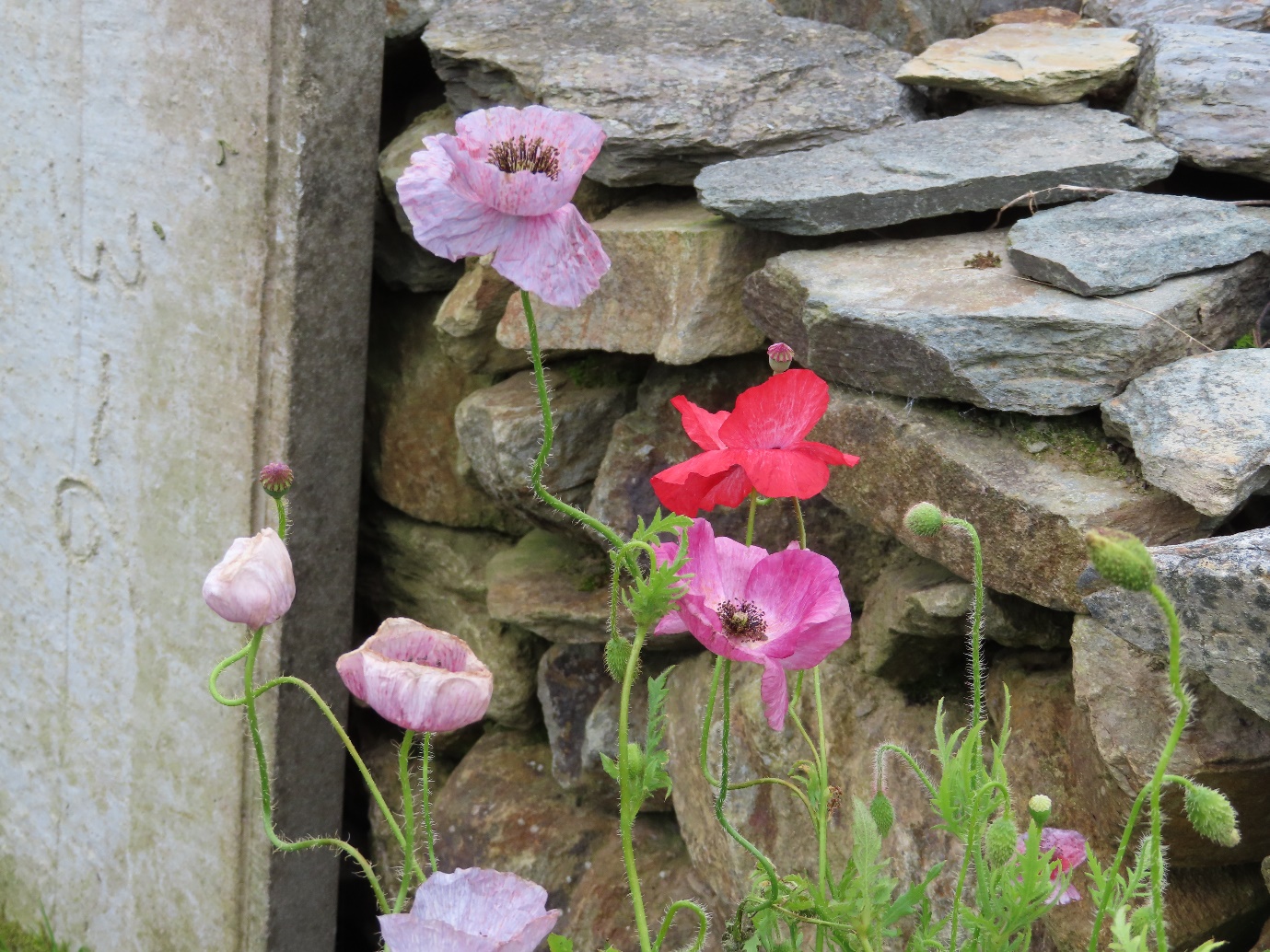 Luckily a number of herbs and plants that are favourites with the bees survived the storm untouched. I have planted Nepitia Six-Hills Giant throughout the garden and it continues to be one of the most popular plants with bees including honey bees. Abelia Grandiflora has lovely glossy pink/green leaves which may provide them with some protection in bad weather. However the light pink trumpet like flowers are as resilient and usually last well into winter. The French lavender has also done well and is still attracting bees. 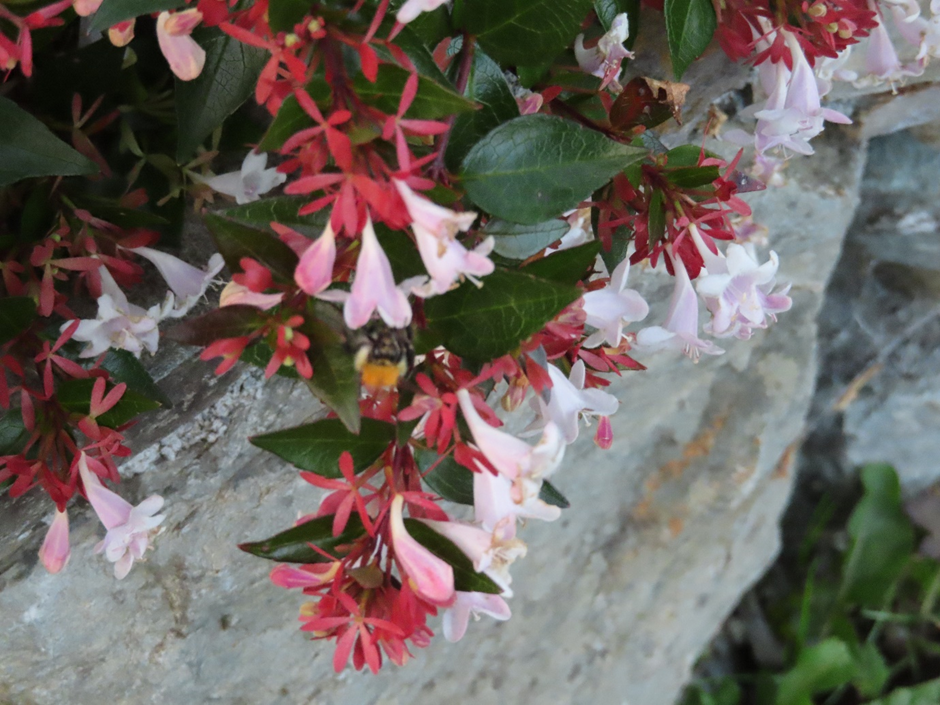 A bumble bee feeding from the Abelia Grandiflora after Storm Francis.

The native heather is beginning to fade but has fed the bees for months so they can’t complain. The photograph below is taken in a corner of the garden that I leave alone, apart from planting some hedging to protect from the east winds. On windy days it is quiet and a haven for butterflies, hoverflies and bees. 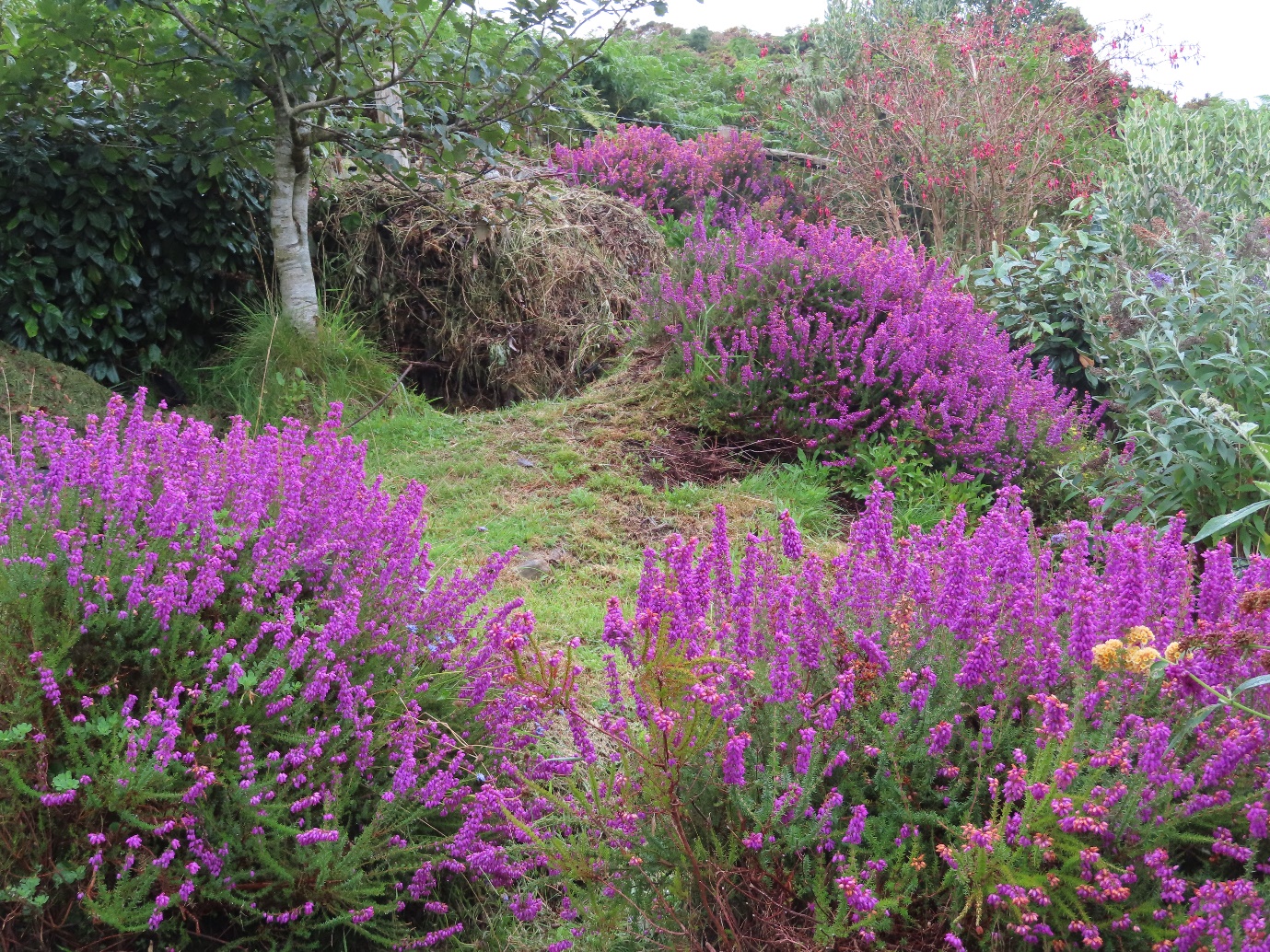 I have never fully understood the process of naming storms. The concept is a useful one. Everyone can remember the details of Darwin or Ophelia even if they are vague as to the exact dates. These days ‘Irish’ storms are named by the National Severe Weather Warnings Service in collaboration with the meteorological offices in the UK and the Netherlands. If the storm arises outside these areas the name of the local meteorological service is used. Each year a list of names is generated by suggestions from the public. So far so good. This all seems very simple. However, having experienced two ‘orange storms’ with torrential rains and wind gusts of over 111 kilometres per hour in the last five days at no time did it occur to me to call them either Ellen or Francis – their official names. Most of the words that did come to mind were much more suitable and appropriately descriptive but probably not suitable for general consumption. As these names were generated by the public this can mean one of two things, a) the public have never been in a severe storm and have no concept of how it feels or b) they are naming the storms after their children. I suppose that children could have killed off most of the flowers in my garden, but they would be hard put to give the garden that shrivelled black and brown look that is the hallmark of a storm from the south or south east. Between them Ellen and Frances managed to cover almost all directions. There was no structural damage but no shrub or tree was left untouched. My poor Italian alder, which was still recovering from the last storm, has lost its second set of leaves this year. If it survives I really need to find some way of protecting it in the future even if it takes years. 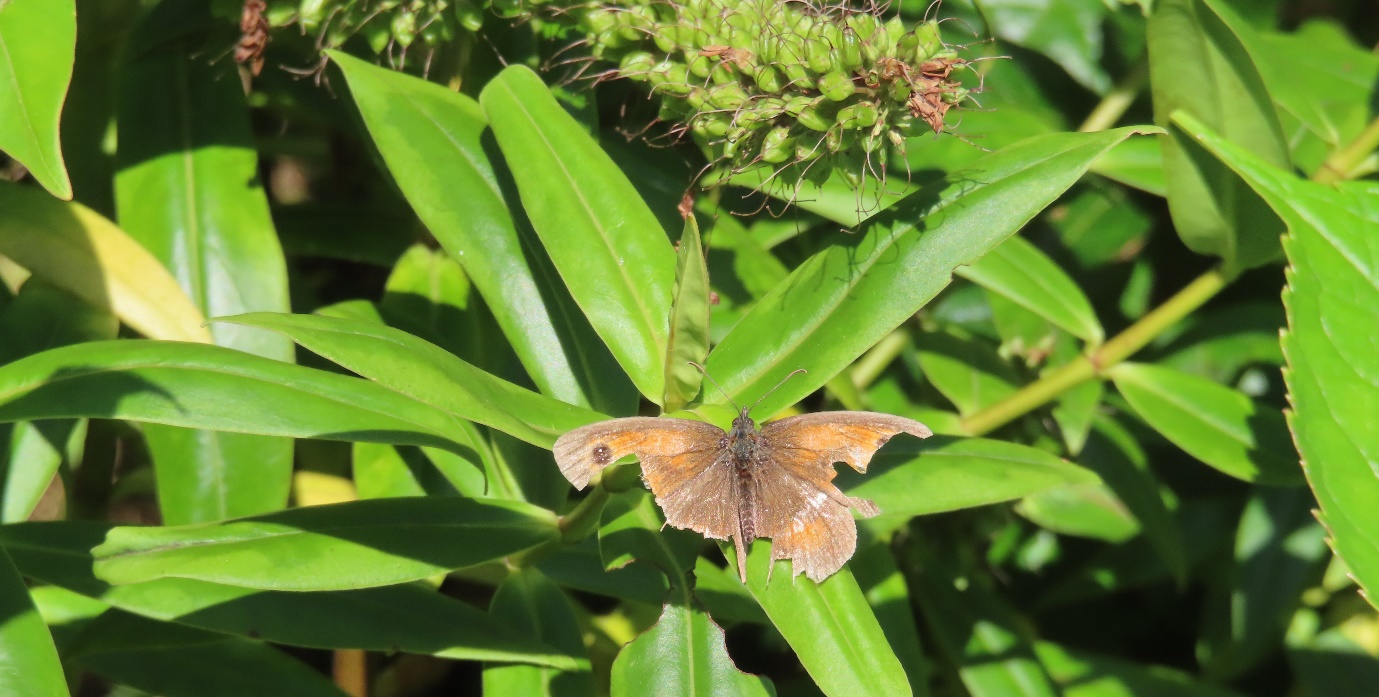 A poor gatekeeper butterfly looking the worse for wear after Storm Ellen. It is amazing that it can still fly.

In the build-up to Ellen the air was as thick as pea soup. The hot still air was unnatural and the dogs reacted to it nervously pacing back and forth despite the heat. The previous evening the water in the bay was so clear and still that you could see the reflections of the lights from the buildings in Cape Clear stretching far across Roaringwater bay. In the morning the bay was like silver and blue glass in the absence of any wind or waves. However, as the day went on Cape Clear gradually disappeared and the blue skies turned an ominous grey. There was a lot of activity in the cove below the house as people rushed to move their boats before Ellen arrived. It had been upgraded to a ‘storm red’ overnight in this area and people were naturally worried for their property. The fishermen in Baltimore, a nearby fishing village, moved their boats to harbours further east. My plan for the week was to visit a number of well-known gardens and to take some photographs. Instead, all efforts had to go into my tried and tested storm preparation mode. What I was unable to control was the electricity. There must have been a power cut during the night that Francis raged around the house. The resulting surge led to my ‘fruit’ freezer losing power and the switch shutting off. I did not discover this for a number of days and by then it was too late. All of the fruit that I had carefully stolen from the birds was destroyed and my winter supply for my healthy cordials gone. I am just glad that the birds got so much in our yearly ‘fruit battle’. 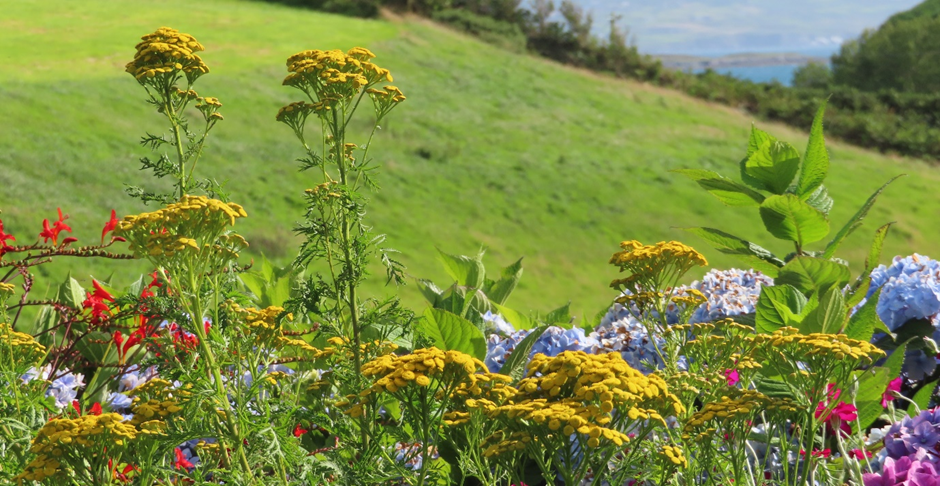 My last view of summer before the storms destroyed the herbaceous border. 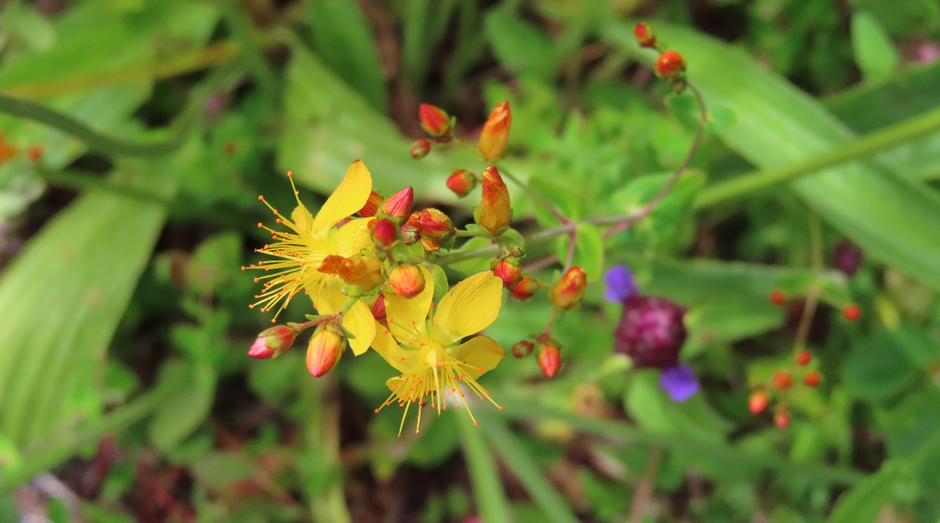 This tiny Hypericum androsaemum, St John’s-wort did much better in the storms than its larger cultivated relatives despite being a new addition to the garden. This is one of a number of native St John’s-wort. They were once supposed to ward off witchcraft but now are more likely to be used as a herbal remedy. 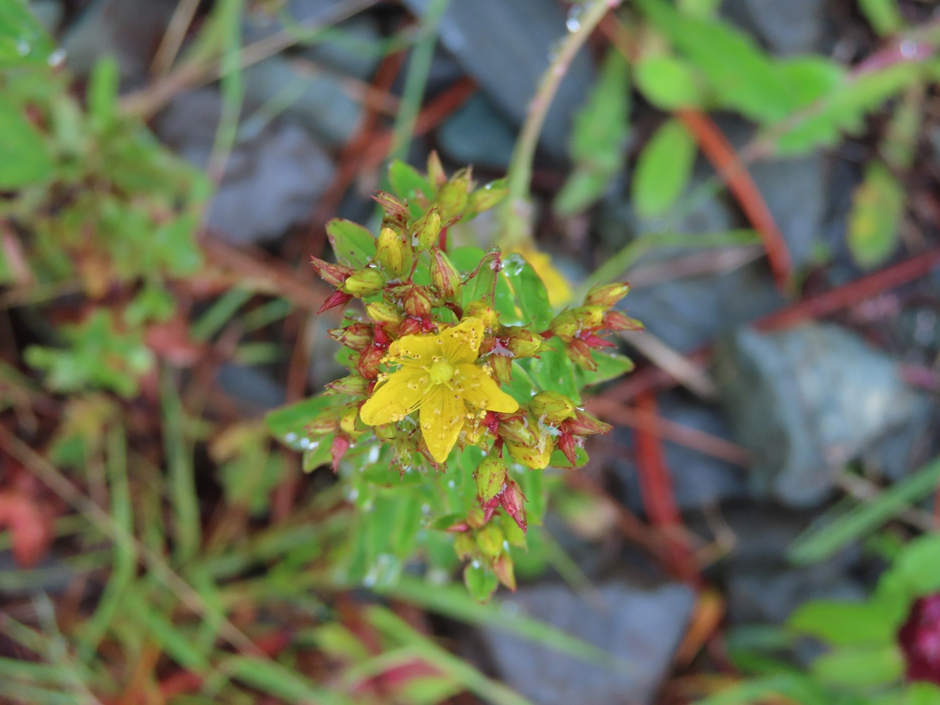 Square-stalked St John’s Wort Hypericum tetrapterum. This is another new addition to the garden and shows the benefits of leaving the ground well alone to see what emerges. 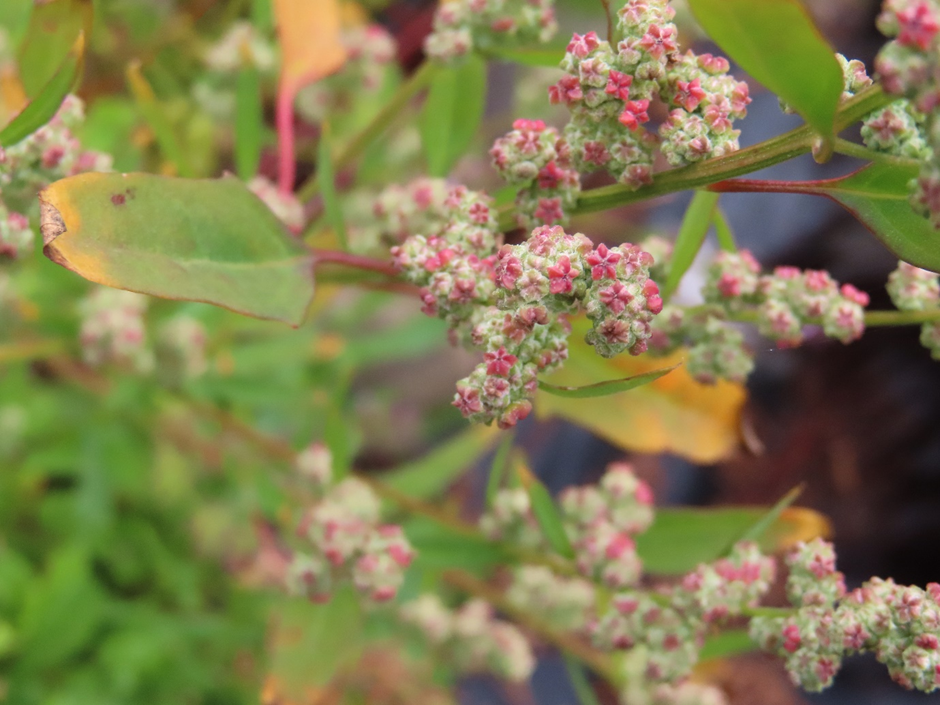 I think that this plant is Red Goosefoot Chenopodium rubrum – a relative of the Fat Hen. It is rather a dull flower for many weeks but develops a lovely pink hue as it matures. 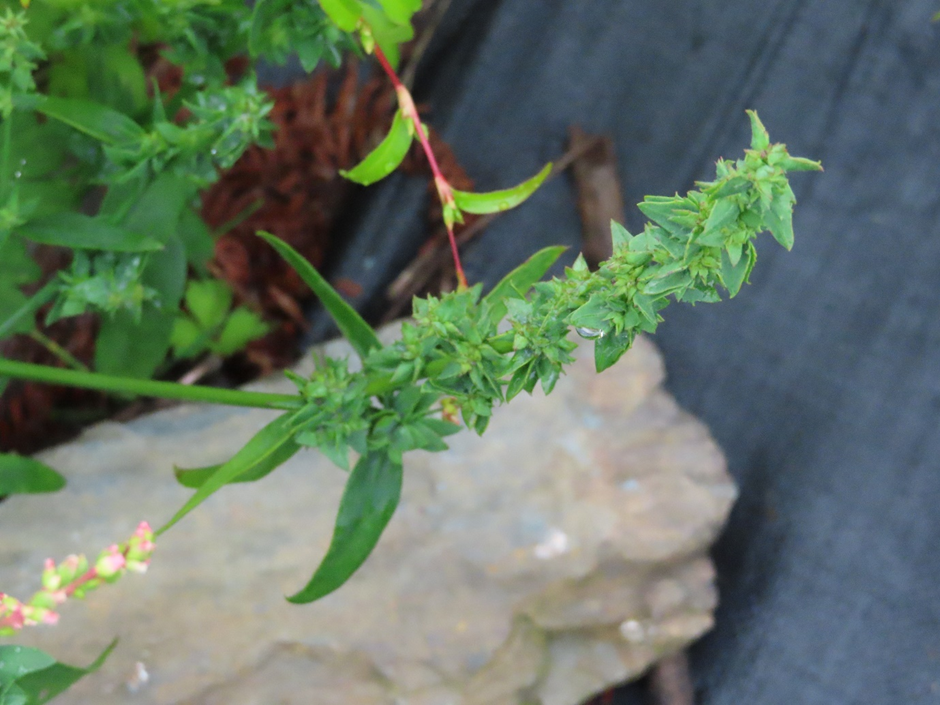 This rather convoluted plant is Common Orache or Atiplex patula. It is another member of the goosefoot family all of which do well in the garden.

The seed head of the Sea Carrot which provides food for a variety of insects at this time of the year.

Once Storms Francis and Ellen receded, Autumn rushed in to take their place. There is a decided ‘nip’ in the air most days. The rhubarb which suffered in the early drought has decided to give up for the year. The peas and beans departed with the storms. The good news is that the crab apple trees have produced a bumper crop. The bad news is that both the birds and Millie love them and compete to consume them as quickly as possible. As they don’t make good cordial I am not too bothered but will mourn the loss of my red, black and white currants for months to come. 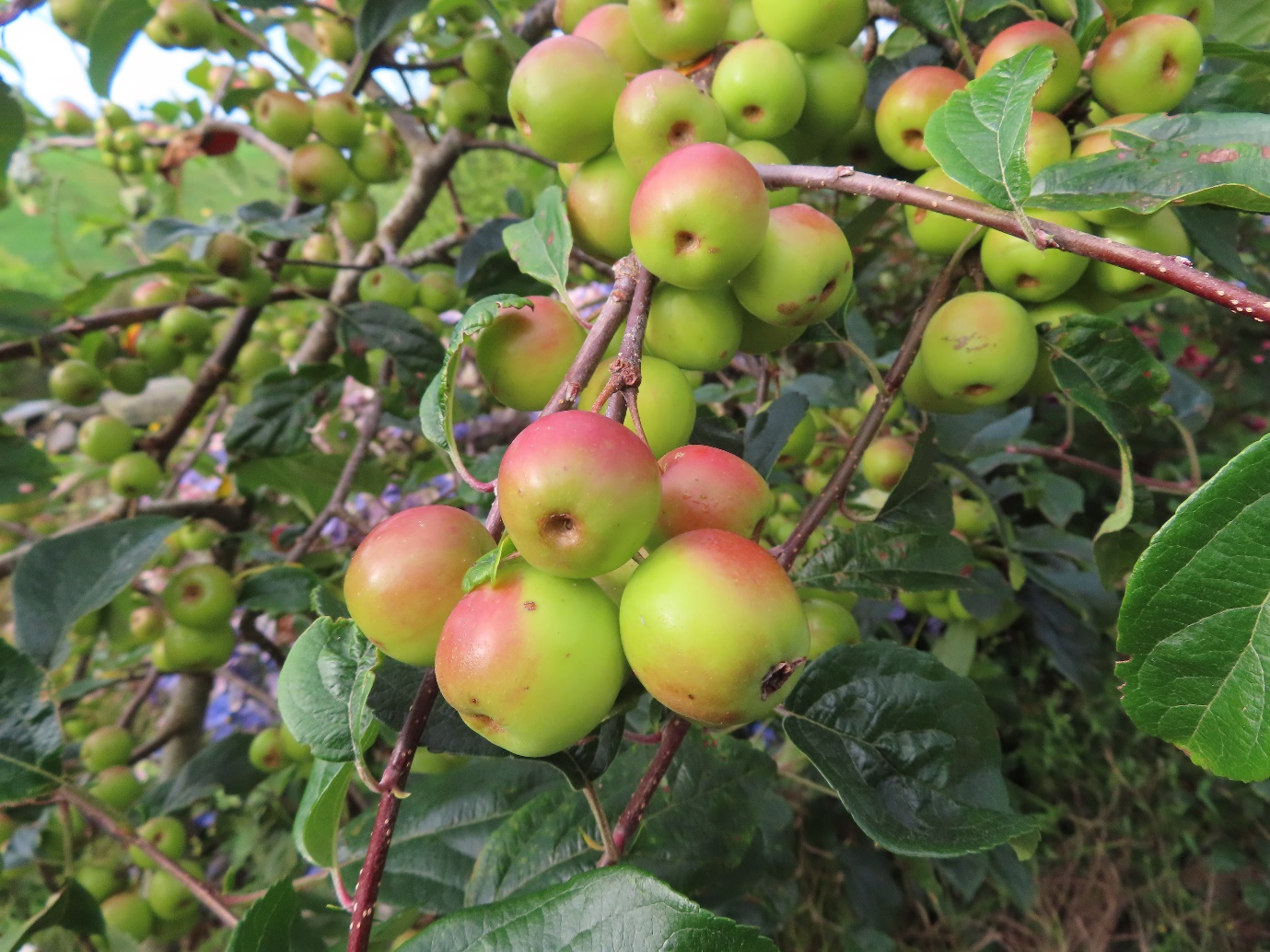 One reply on “Storms Ellen and Francis: A Gardeners Nightmare”

Ah, Julie, extreme gardening it is for sure. Your resilience continues to amaze me…coming from a mild N-E corner of Fife, Scotland. Inspirational!