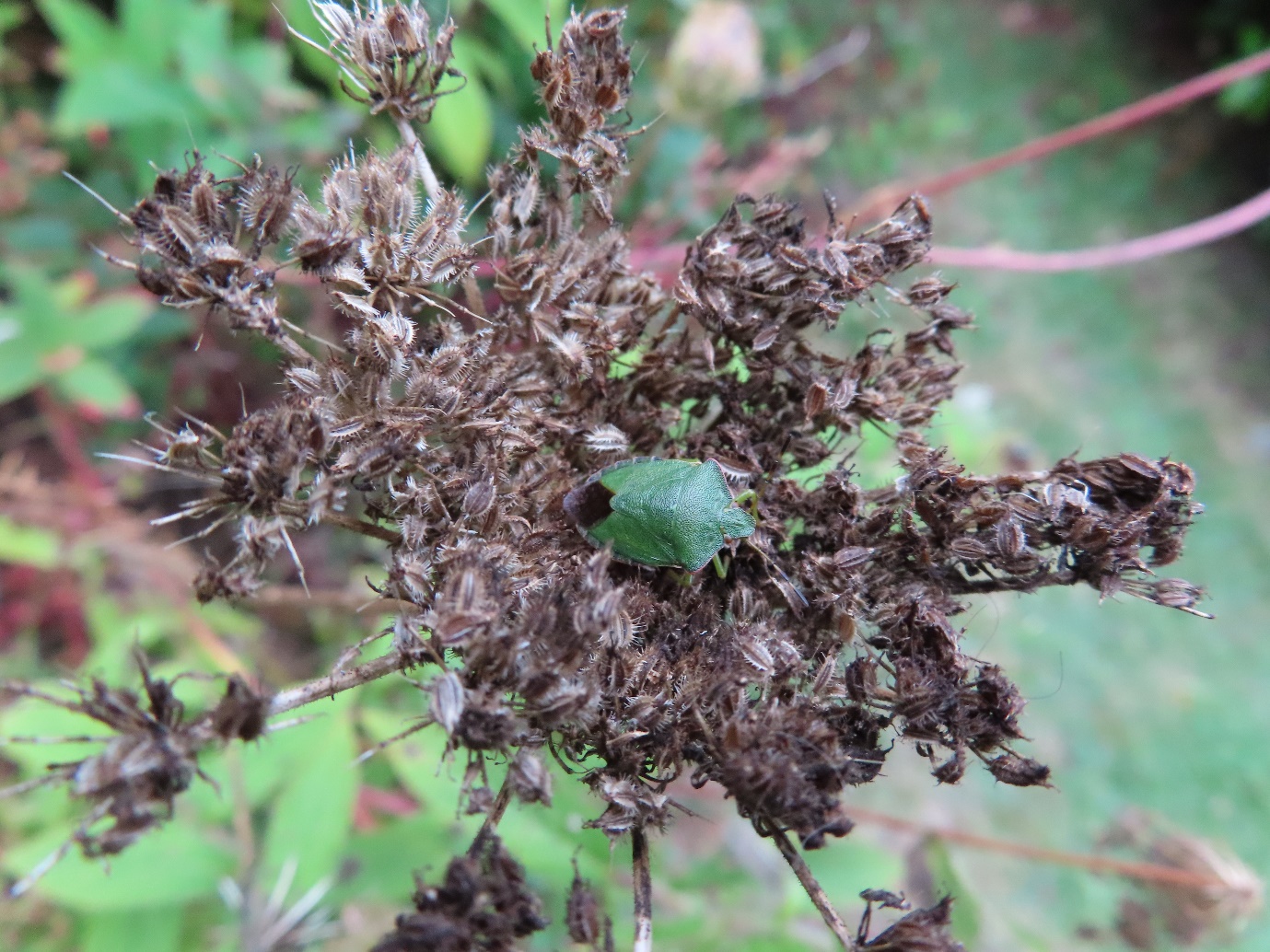 Irish shield bugs are ‘potential’ stink bugs, as they secrete a horrible smell when handled. Apparently, they can also bite. In my experience the smell may be bad, but the taste is foul even when mixed with raspberries. I have been enjoying the latter on a daily visit to the fruit garden and obviously did not pay too much attention to what I was picking. The shield bug quickly let me know by spraying the inside of my mouth leaving me with a memorable taste that could only be tempered by mouthwash. The bug escaped unharmed (I spat it out) but I may have been put off raspberries for life. Shield bug one human zero. 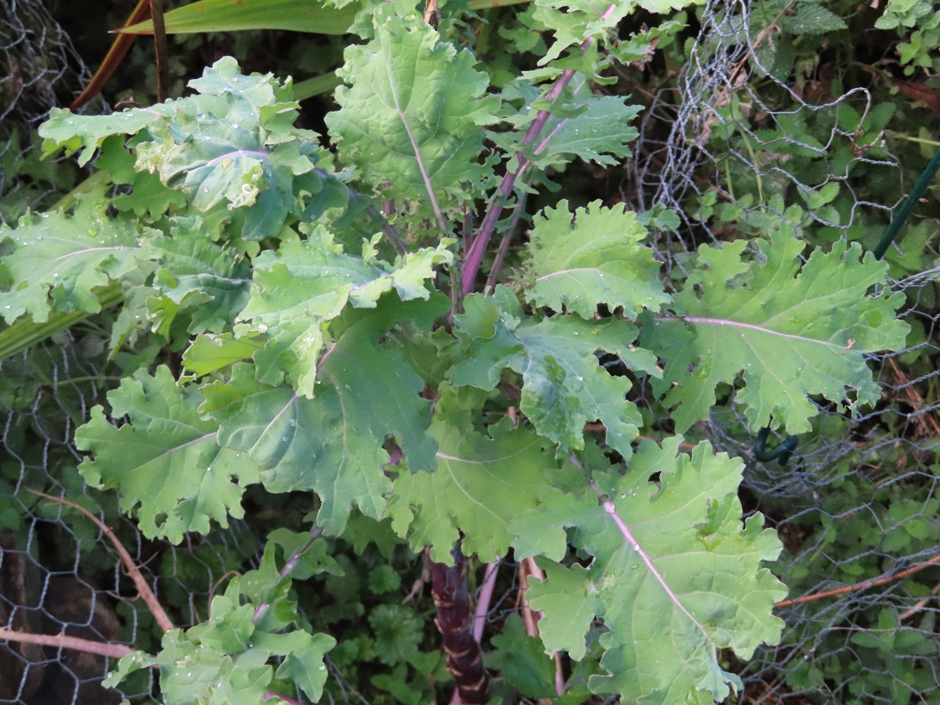 There is good and bad news on the vegetable front. My Russian kale has made a complete recovery and the skeleton stems have been replaced by healthy new leaves. My first thought was that I would not have to buy any this winter and that I could be self-sufficient in at least one vegetable. My confidence was bolstered by the fact that the weather has turned decidedly cold and the risk of caterpillars has receded. Within minutes of my discovery, I was able to get a couple of good photographs of a lone, large white butterfly obviously ‘casing’ the vegetable garden. I am now pretty sure that the kale is doomed despite how late it is in the season for caterpillars. It is never good to be over confident. Cabbage white butterfly one human zero. 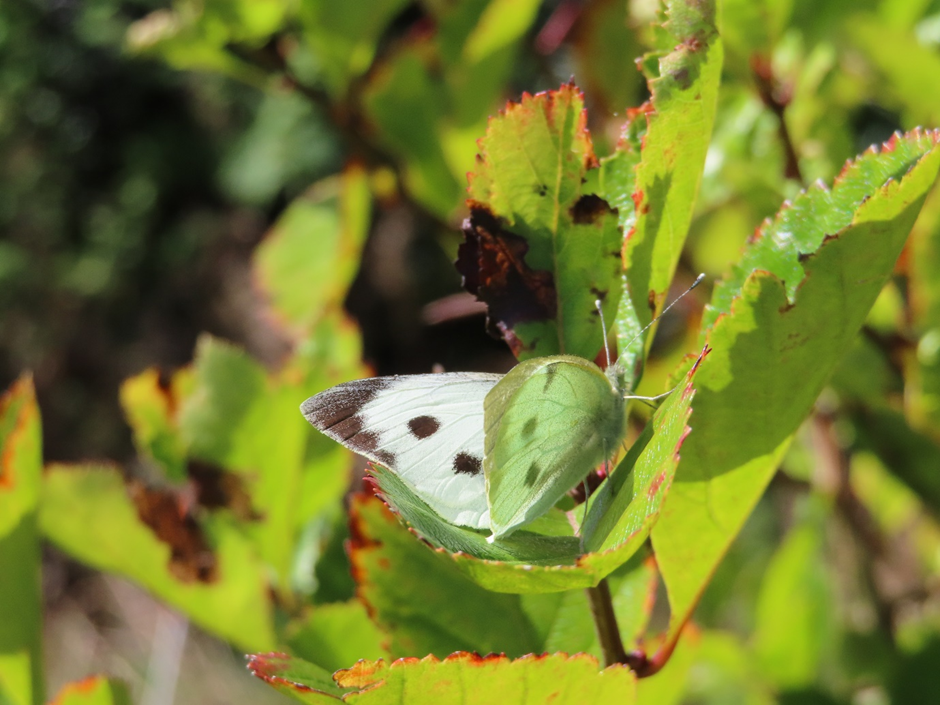 Perhaps the last Large White Butterfly of the year doing as much damage as it can before winter. 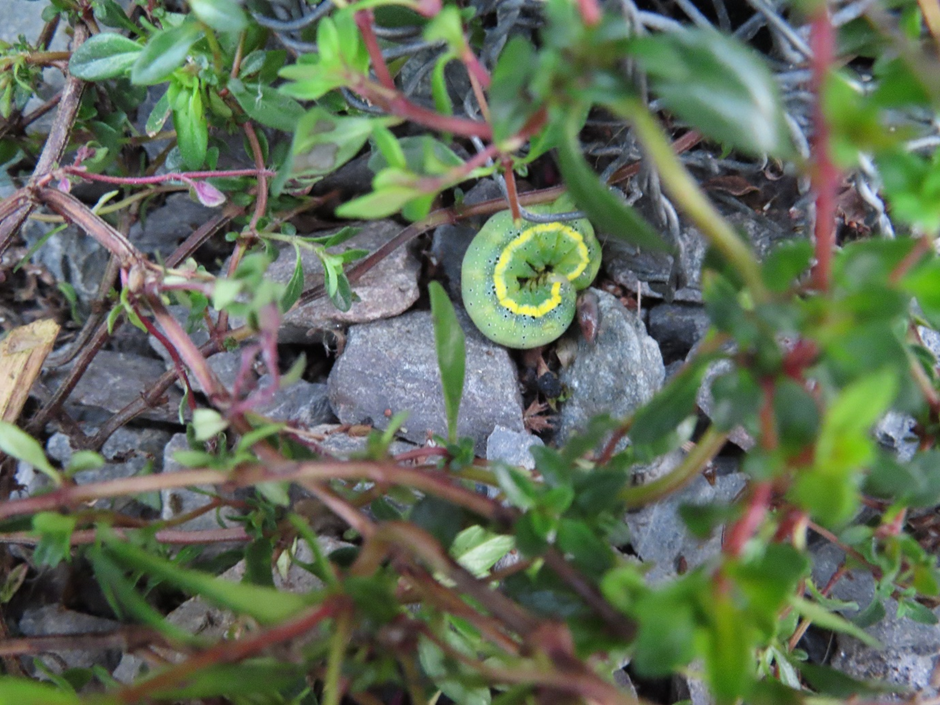 The final straw. This does not look like a mature cabbage white caterpillar but as it is inches from my kale and courgette plants previous experience tells me that it is up to no good. Caterpillars one humans zero. 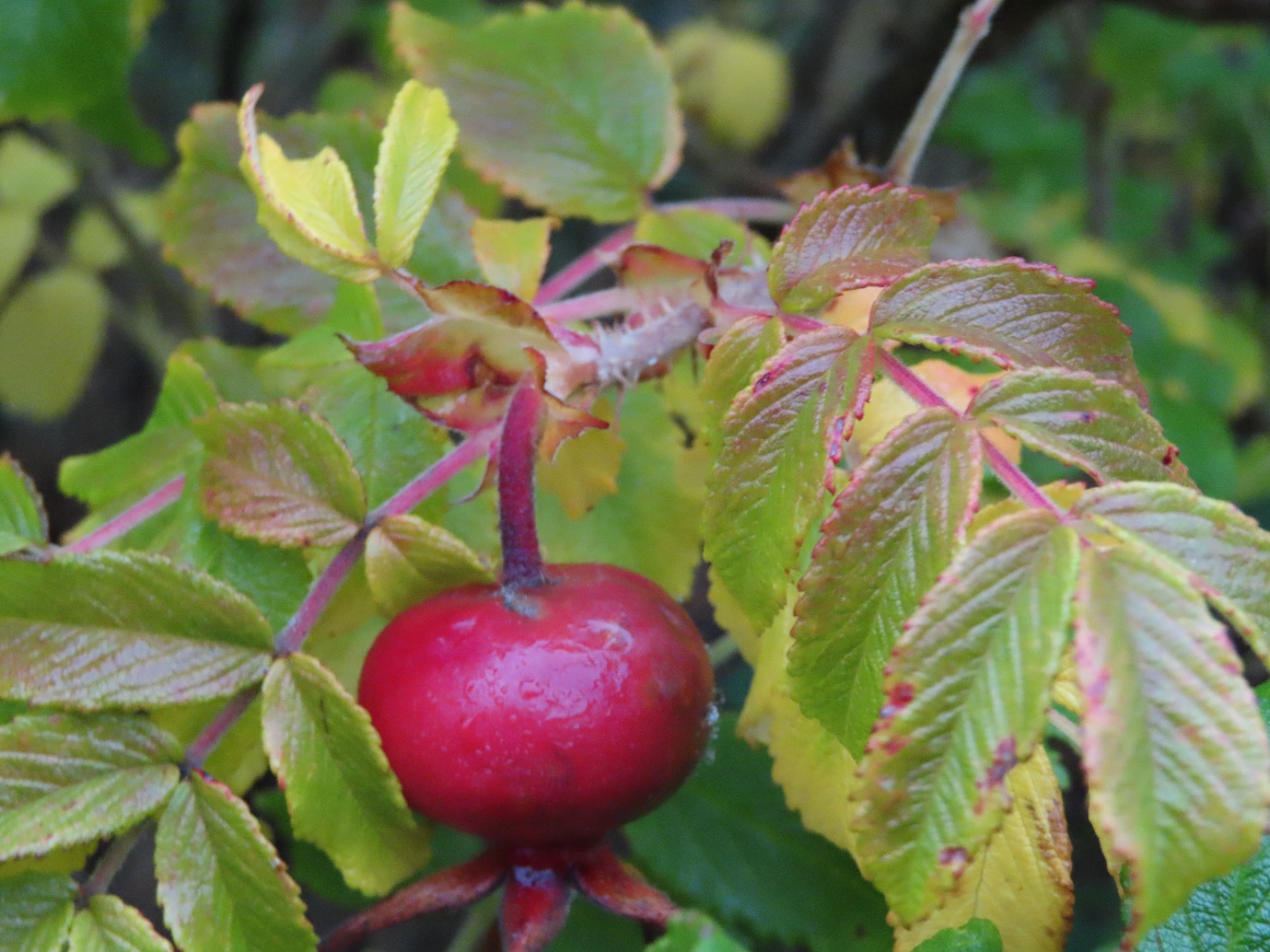 The rosehips have been particularly plentiful this year and made a dramatic show against the vivid yellow of the turning leaves. An unexpected break in the weather allowed me to pick a final crop for my syrup. I have learned to do this job out of doors at this time of the year as the earwigs are also plentiful. I have never eaten one but do not appreciate the nip that they can give when riled or even when not. In a bucolic scene I sat at my stone table in the prehistoric garden painstakingly removing the seeds. The tedious job was made pleasant by the robins serenading me on either side of the small garden.

Sadly, all hell broke loose when I thoughtlessly placed some seeds on the dry-stone wall before my task was finished and I could distribute them evenly throughout the garden. A minor battle ensued as the ‘intruder’ was driven off.

I compensated for my error by placing the remaining seeds on the wall throughout the garden and was pleased to see that they had all disappeared by the next day. 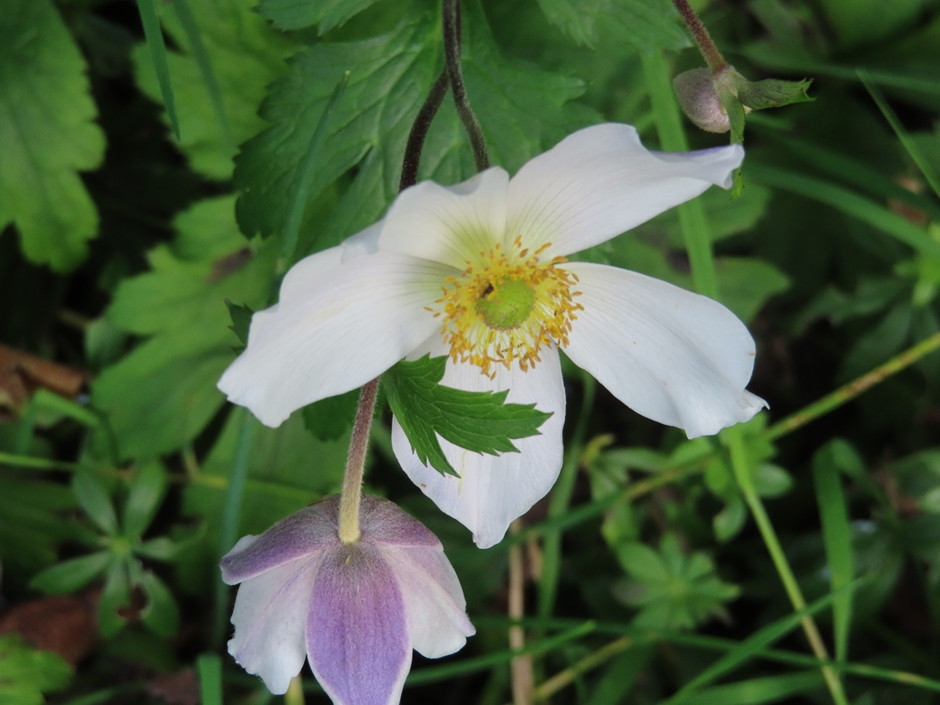 After months of hot, dry weather the normal autumn weather has arrived. The strong winds have returned and the bay is filled with white horses. Despite this there are still small spots of colour and beauty in the garden like the above ‘Ruffled’ Anemone. This nestles under a venerable willow tree and provides blossoms well into autumn. It is currently my favourite as the under petals are a delicate violet that sets it apart from others. 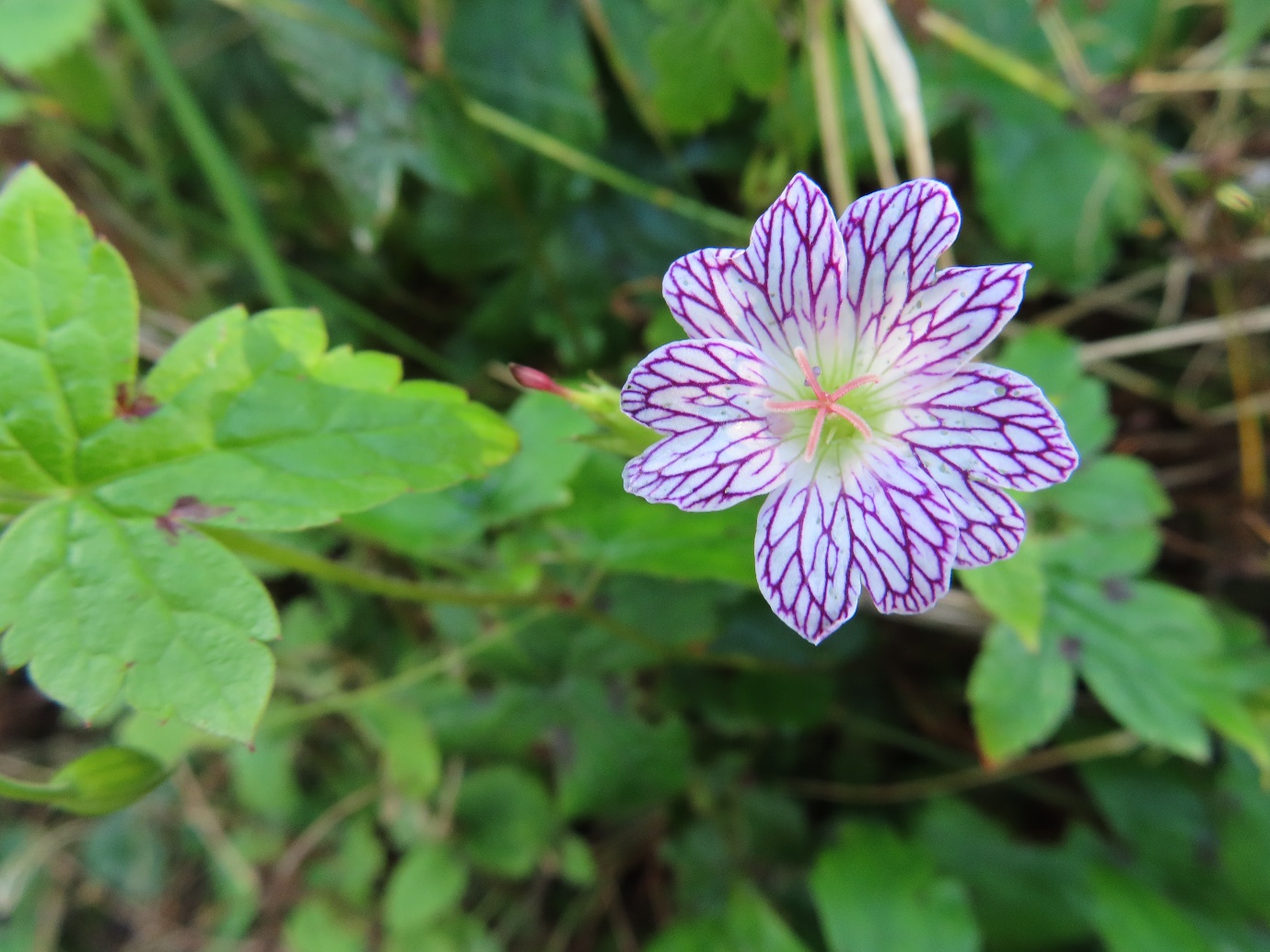 This ‘Pencilled’ Crane’s-bill Geranium versicolor is so tiny that you could almost miss it at this time of the year. In summer it was a mass of flowers and it is still bravely continuing to produce some on a regular basis. It reminds me of the glass in a gothic cathedral and the pattern of the veins must be one of the most complex in the geranium series. 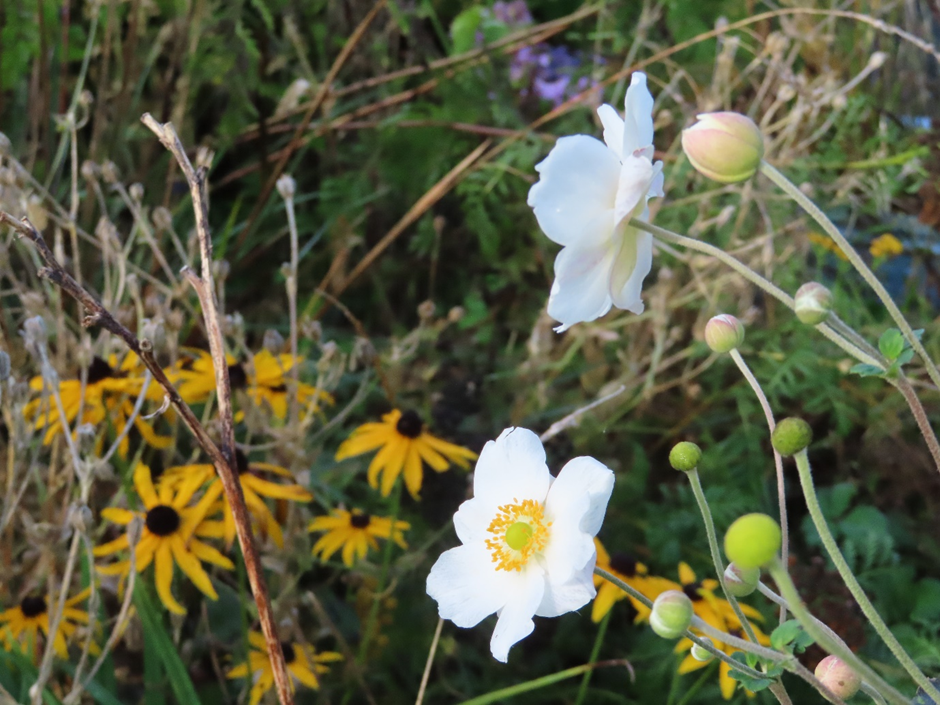 The Japanese Anemone is also providing colour to complement the remaining Black-Eyed Susan flowers. It can be an invasive plant but it is battling against strong competition in my herbaceous border and has never spread very far. 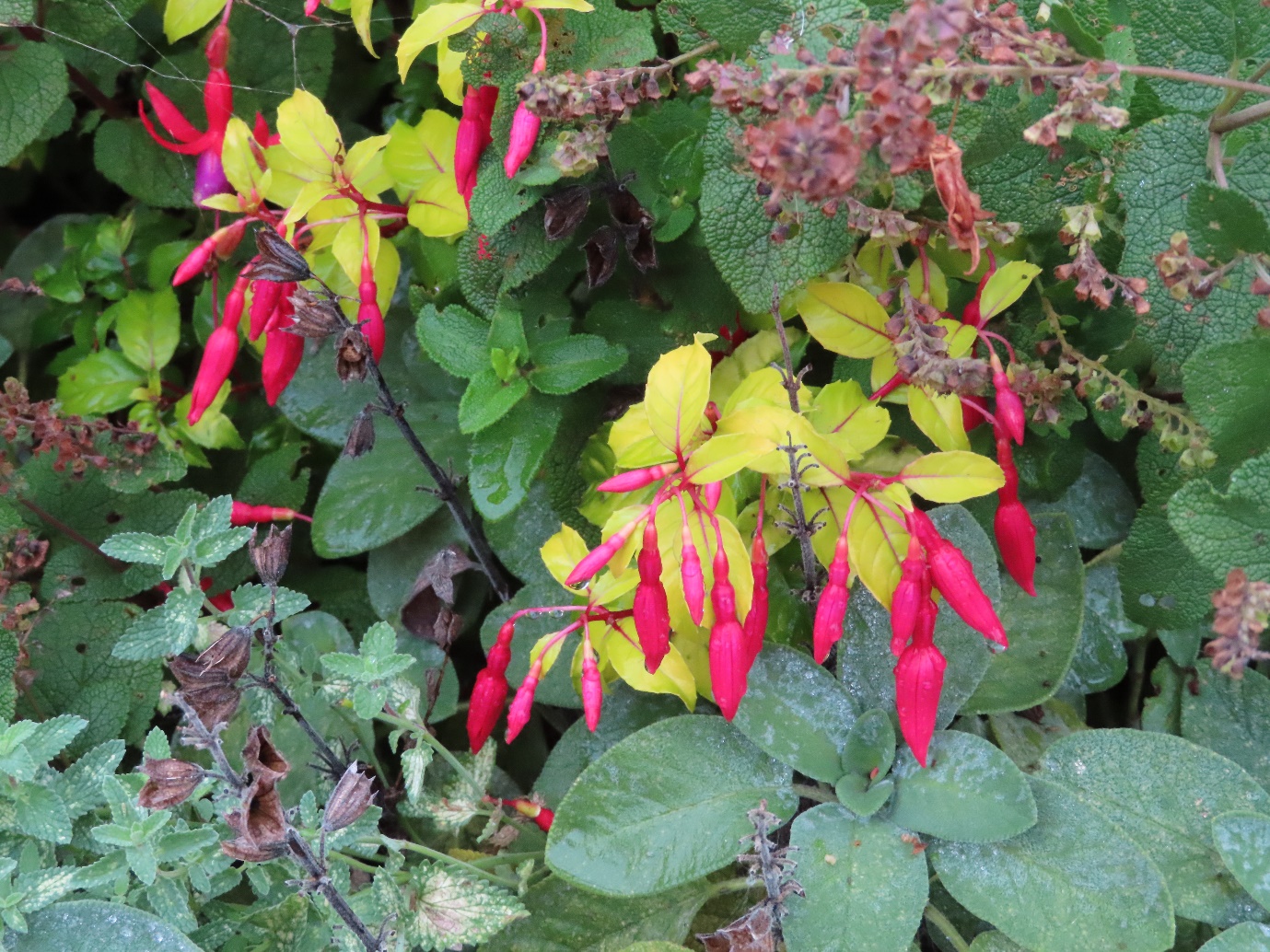 Like many of the plants in the garden I bought this Fuchsia Genii before I had decided on a comprehensive planting scheme. I tucked it into a rockery that I had made and forgot about it. Despite the fact that it has little space it is thriving amongst the sage and rosemary. Moving it now is likely to be a death sentence so I will continue to let well alone. 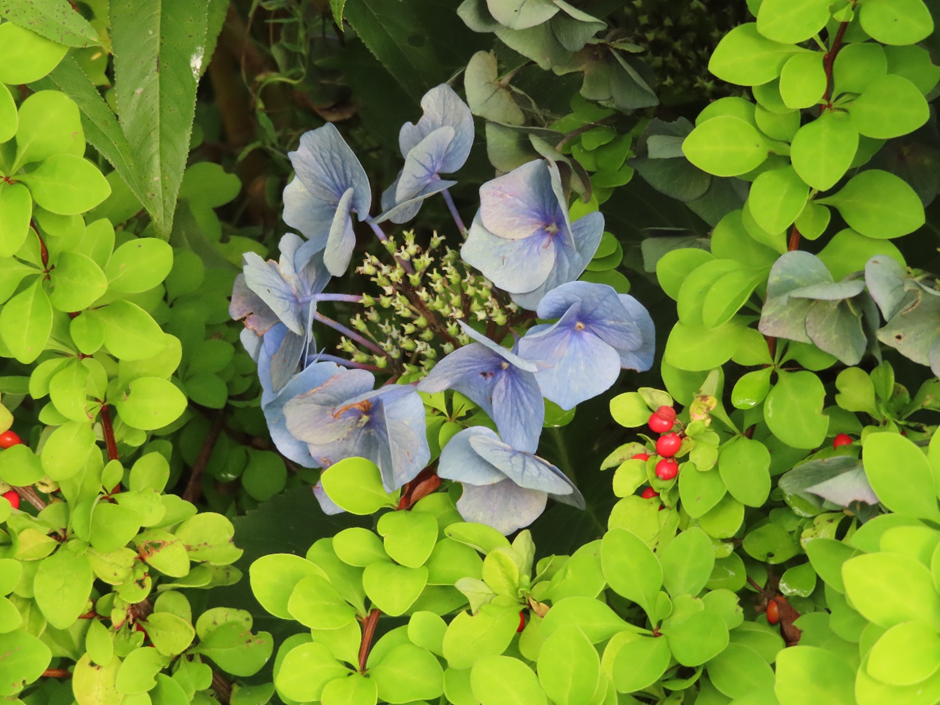 While many of the hydrangeas are showing the effects of the dry summer almost every one continues to produce a few new flowers despite the lateness of the season. This allows me to pick fresh blossoms on a daily basis. This Teller Sky Blue has merged with a berberis to good effect. 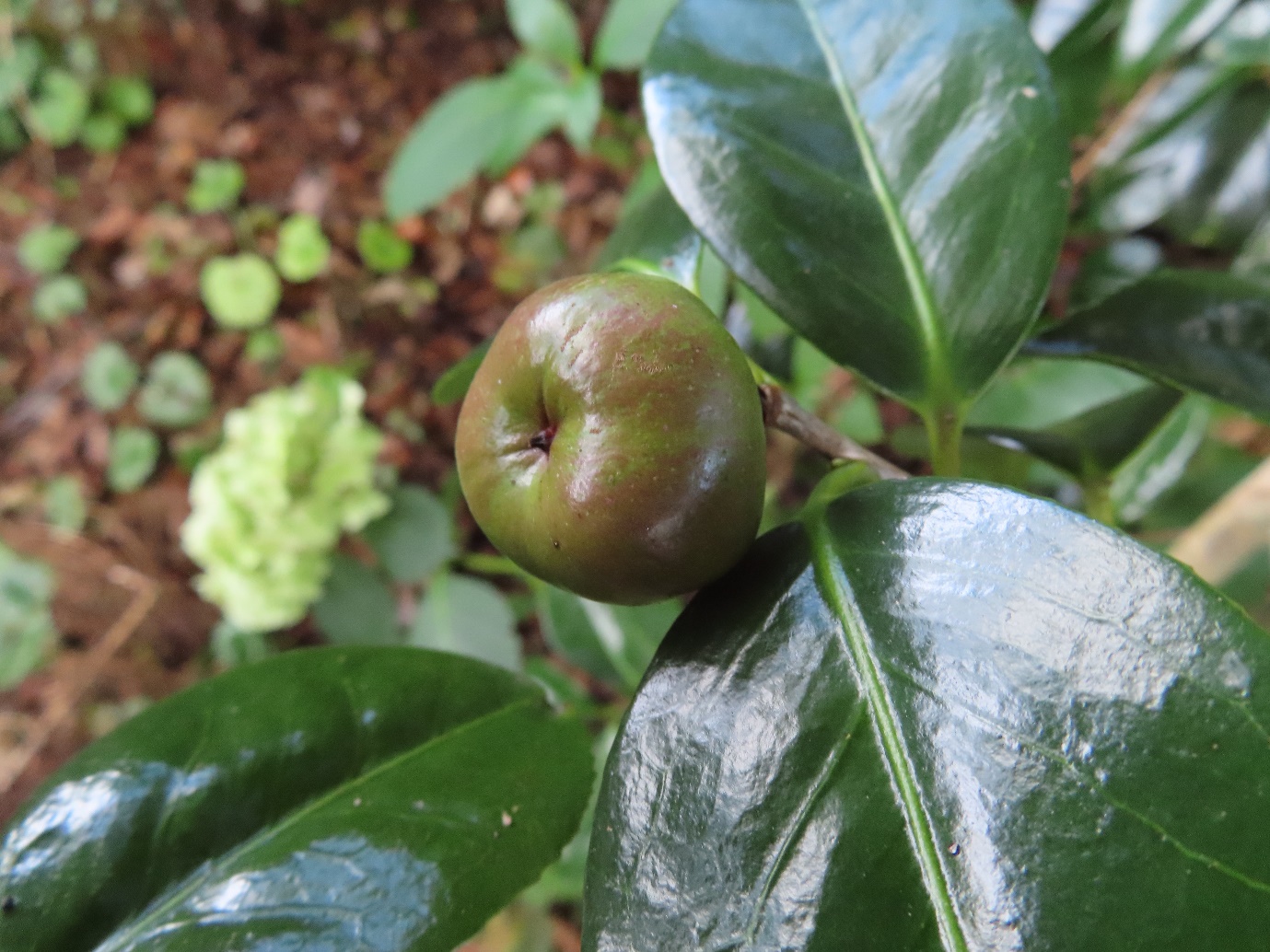 When I saw this apple-like fruit on my Camelia Japonica Adolphe Audusson I thought I had made a mistake in my plant labels. I have never seen fruit on a camellia bush before and I had to rush to my books to see if it was genuine. It is and I think that these have appeared as a result of the long, warm summer. Having found a few more brown, hard-shelled fruits on my Camellia Reticulata Inspiration I am determined to try and plant a few to see if the seeds ripen. I am aware that I have little or no chance of success but it is fun to try and I may never have another opportunity. 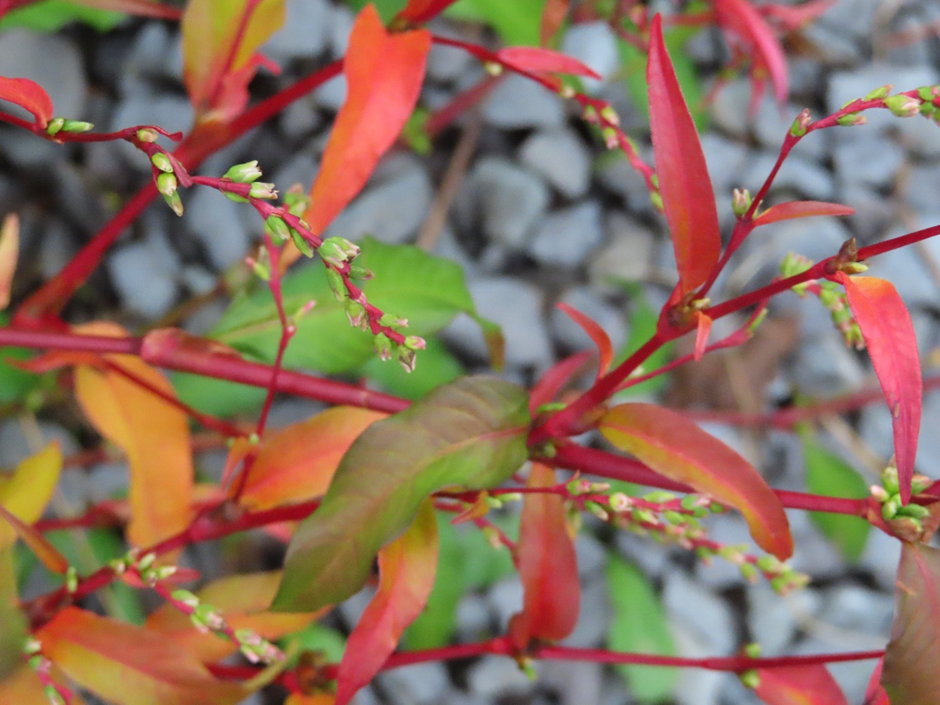 The wildflowers in the garden are continuing to provide colour. This Water-pepper Persicaria hydropiper is particularly happy in the small, sunny, south facing vegetable garden although the reference books say that it prefers damp, waste ground. Perhaps this accounts for the consistent autumnal colour of the leaves. It can also be recognised by its sheath-like ochrea at the base of its peppery tasting leaves. As a scientist I felt duty bound to use this information to confirm my identification. I can say with confidence that the leaves do have a peppery taste but as my upper lip instantly went numb, I had to spit it out without testing the nutritional or medicinal effects of ingestion. Wildflowers one human zero. 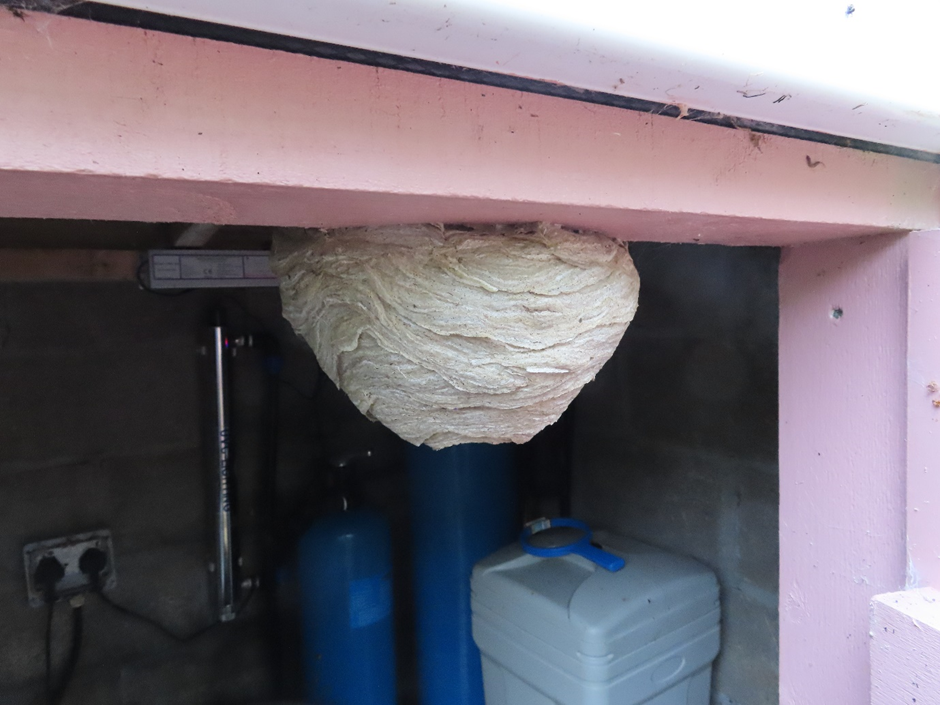 After my encounter with the wasps living in my well-house a few weeks ago I decided to leave them in peace and revisit the issue in November when they were all dead. Within just one week a major leak in the house meant that I had to cut off the water and at high speed. The door is just four feet high so it is a risky business entering at any time. I am pleased to say that no one saw me as I slowly made my way into the house in a commando style crawl muttering reassuring sounds to the wasps. I still can’t believe that they left me alone but maybe they felt that they had already stung me enough in previous encounters. Wasps zero human one.

Overall tally: nature will win almost every time but sometimes can be kind. (Note, having finished this sentence I took the dogs for a walk in the rain. I am now recovering from a very painful sting from what surely must be the last wasp of the year. So much for kindness).