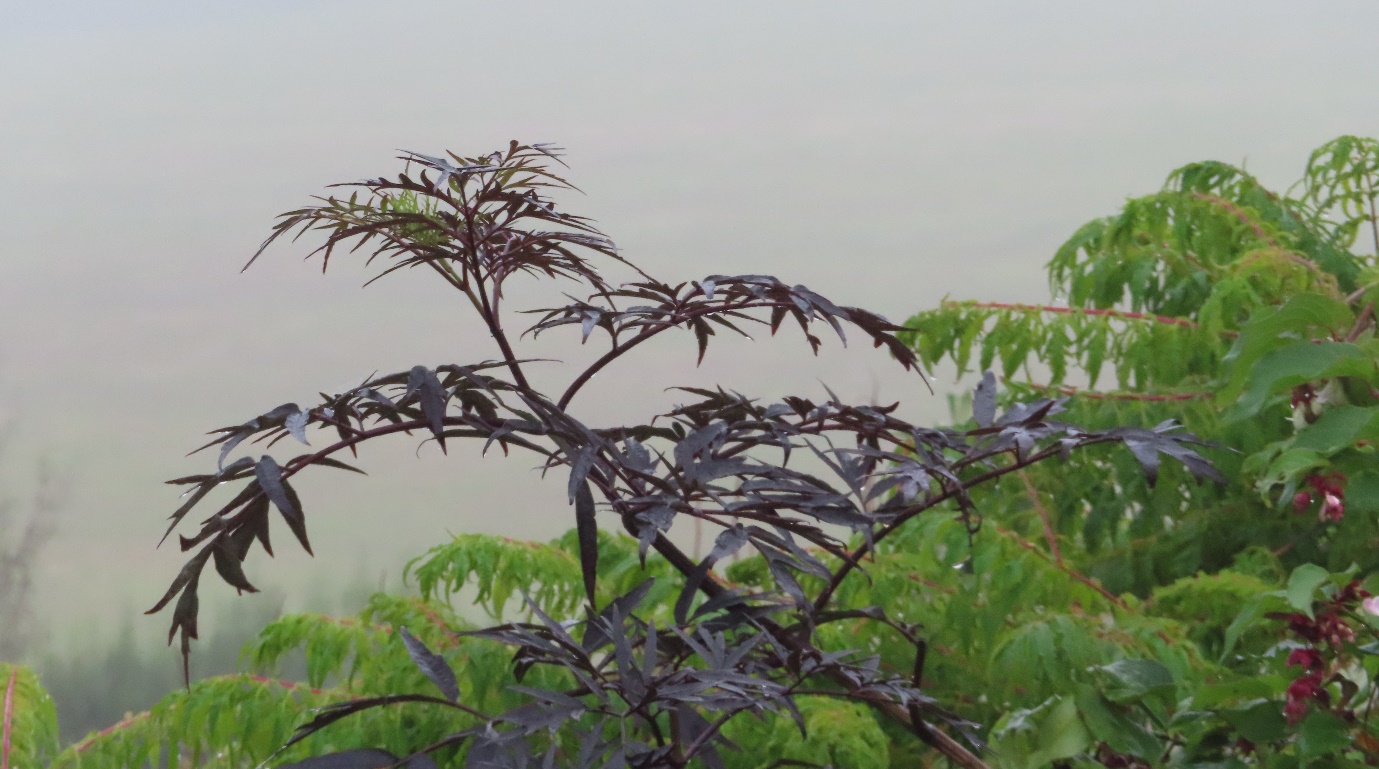 The air has been thick and heavy for the last few days and this morning the garden is shrouded in a dense fog. On my morning round I could not fail to notice that the spiders have been very busy overnight. Almost every shrub is cloaked in not one, but dozens of cobwebs – as shown in the photograph below. I don’t think that I have ever been aware that there was such variety and spiders are obviously master designers, sometimes defying gravity to make their creations. All of the webs seemed empty, so I presume that they do their work of capturing insects throughout the day. 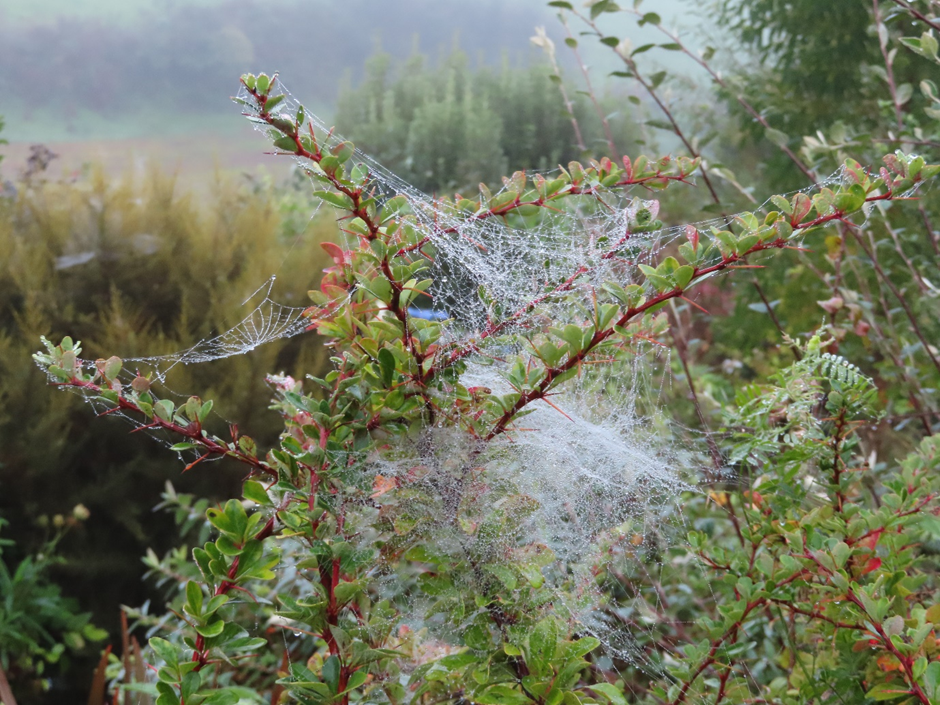 Some cobwebs are like the lace patterns of my childhood but in other cases the shrubs have been covered in a thick ball of foam which looks more like candy floss than a spider’s web. Given the work that these creations require, it is sad to think that they may be gone by the end of the day. 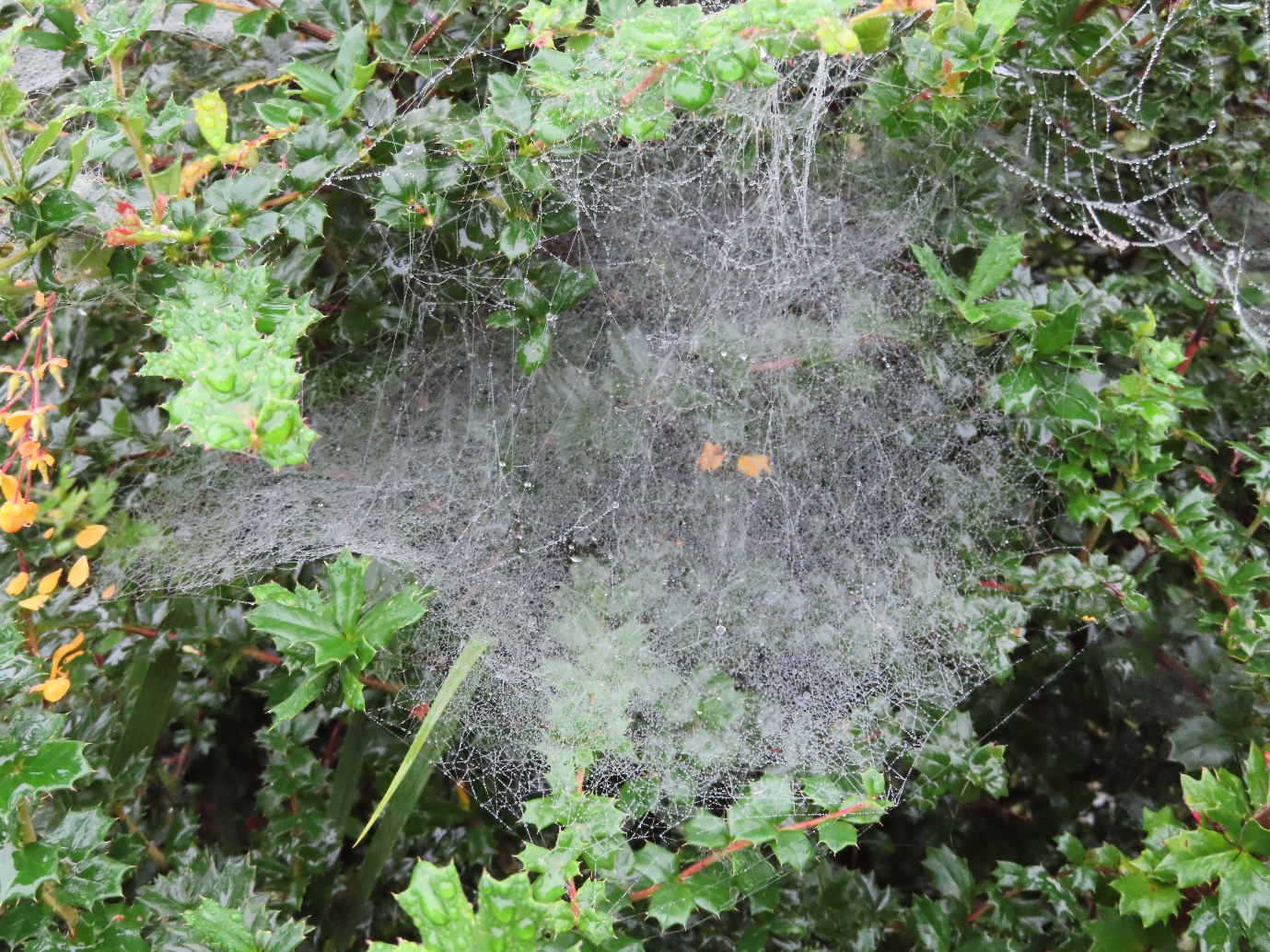 Despite, or maybe because of, the weather the birds are out in force this morning. Three male robins and one female are fluttering around the small garden in front of the house. I presume that there are some issues regarding territory, although the garden sustains at least three male robins a year. The wrens are also in evidence although they tend to stay in the bushes unless it is essential to do otherwise. The hedgerows are full of blackbirds who continue to make the most of the shelter and food that they provide. They do not seem too perturbed by the dogs who insist in flushing them out of the hedgerows each morning as a matter of routine. Maybe the birds know that the dogs are not really serious in their intentions as there are never any casualties and the dogs give up very quickly. It certainly has not put the birds off from nesting in the hedgerows. 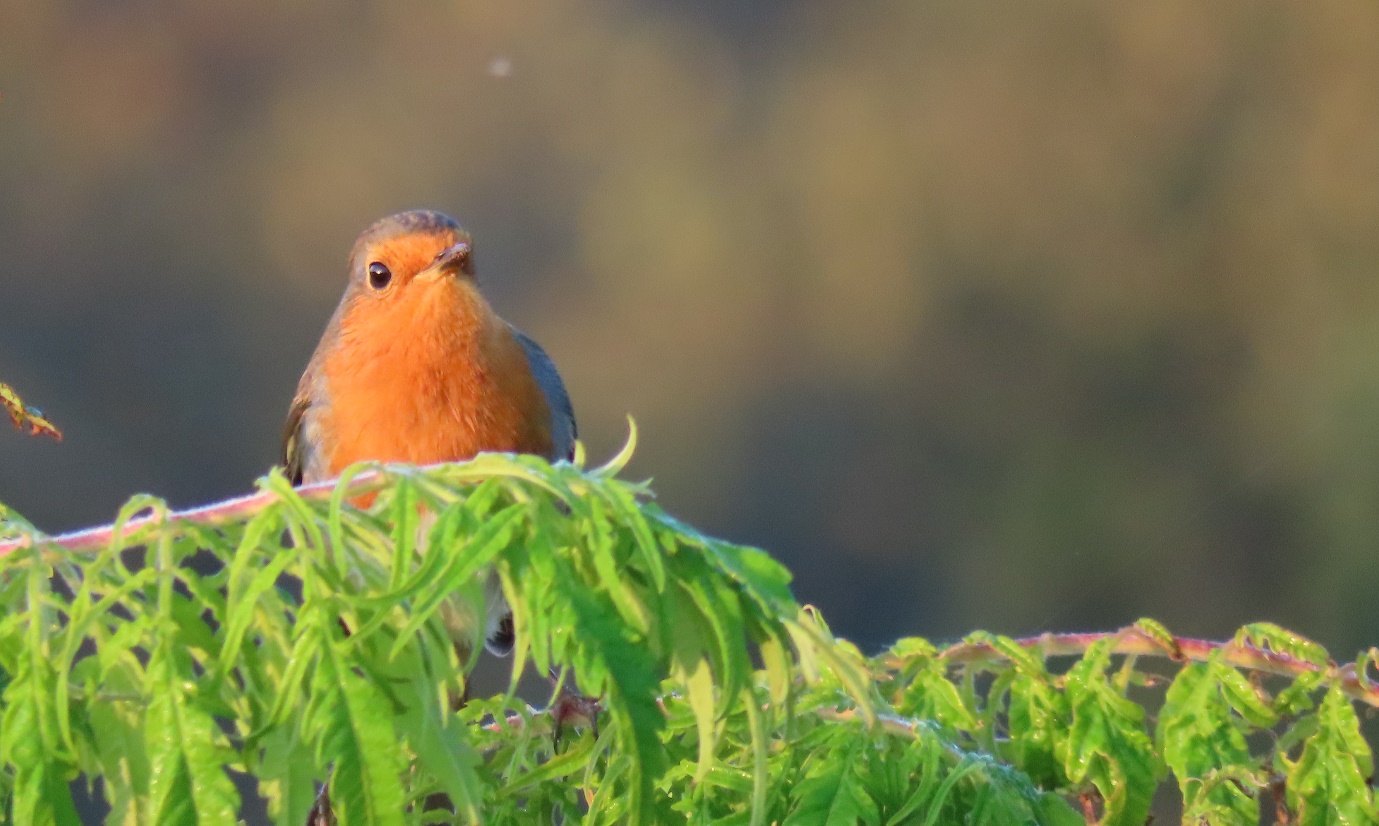 A robin on my Staghorn Sumac

At this time of the year the rosehips are at their best and as they are often full of earwigs, I presume that the protein is appreciated along with the vitamins.

I have planted dozens of rosa rugosa on the driveway and throughout the garden. These provide colour for much of the year and the rosehips are particularly plentiful this year. Surprisingly the black ones seem to be the most popular with the birds and they are disappearing fast. 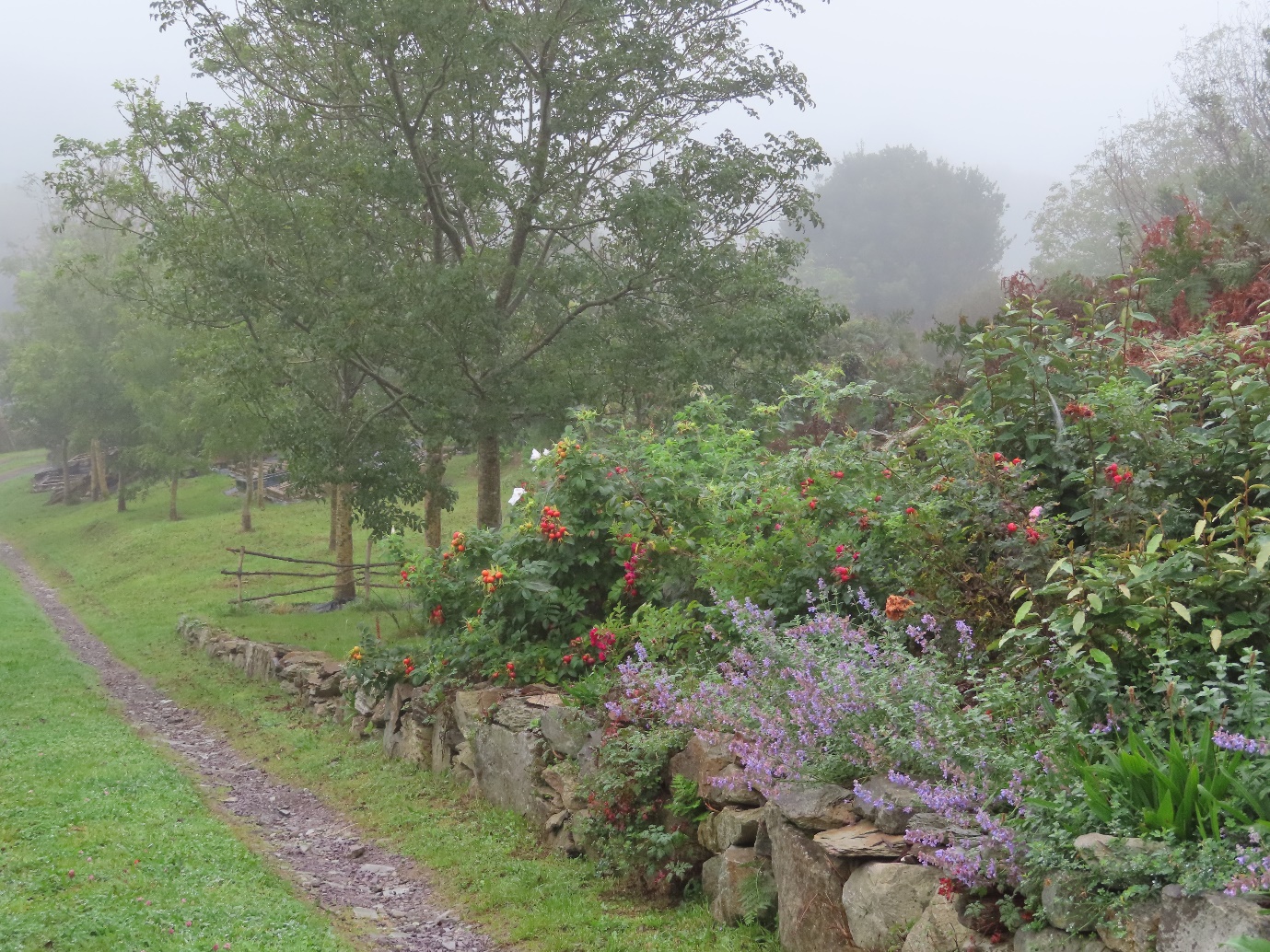 Rosa Rugosa and Nepeta Six hills giant feeding the birds and the bees on the driveway.

The garden is also full of other fruits. This year some of the crab apples are shrivelled and hard and I think that the six weeks without rain early in the summer may have been responsible. However, the crop on the crab apple Malus Gorgeous seen below is so profuse that it is weighing the branches down. 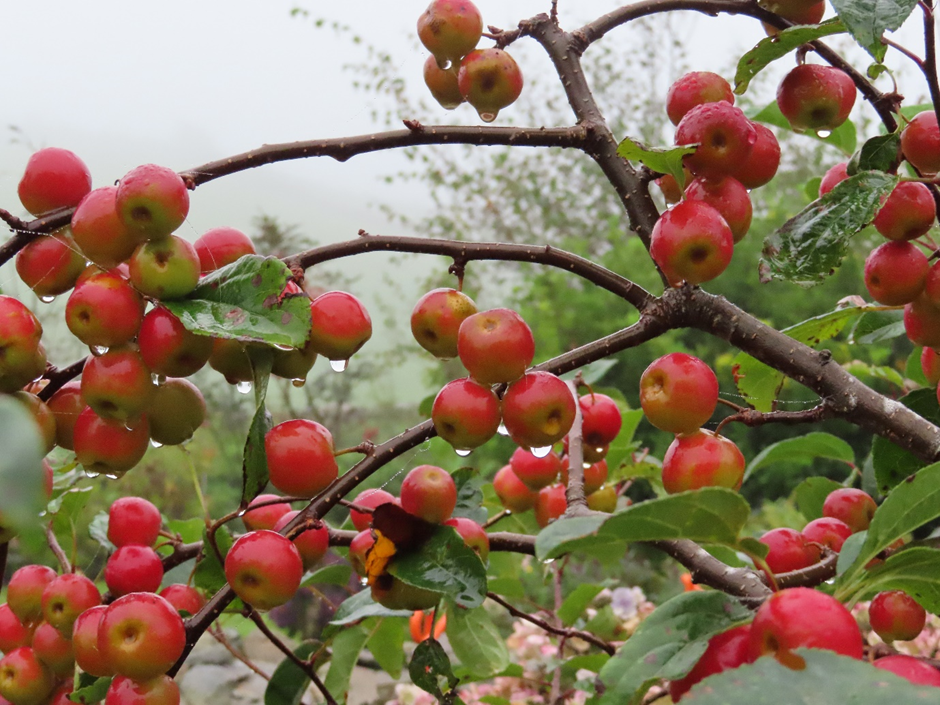 The rowan trees that have the protection of other trees in the copse also have had plenty of berries this year. Like the black rosehips they are not lasting long and one tree was stripped overnight. 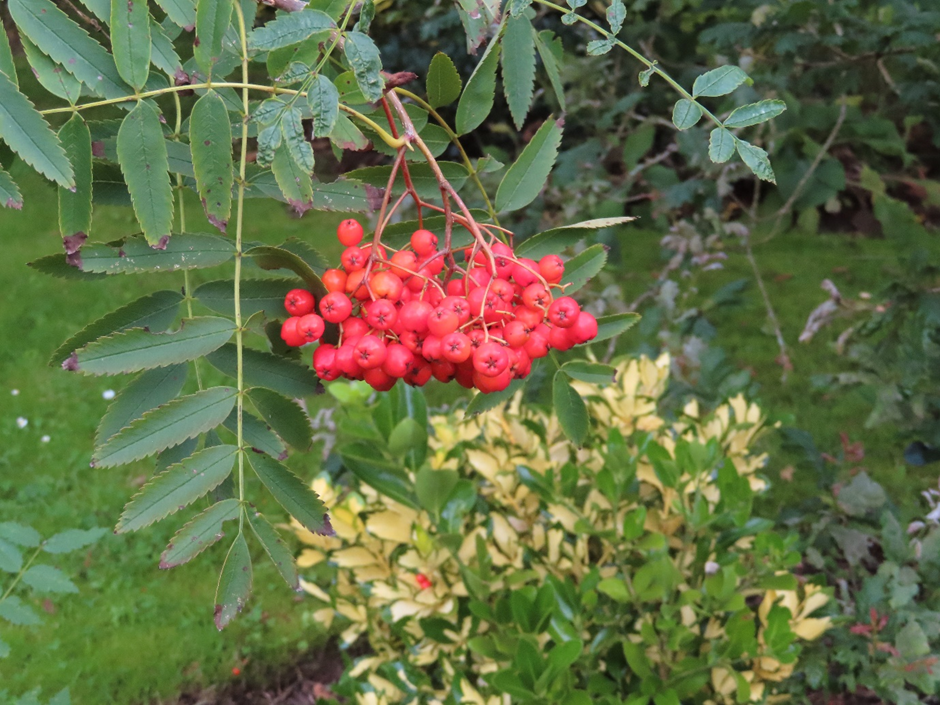 In Scotland I found that the pyracantha berries were the last to be taken by the birds and often lasted well into winter. With the amount of birds living in or visiting the garden I suspect that this will not be the case here. I have planted Red Column and Orange Charmer as a hedging in the prehistoric garden so I will soon be able to make comparisons. 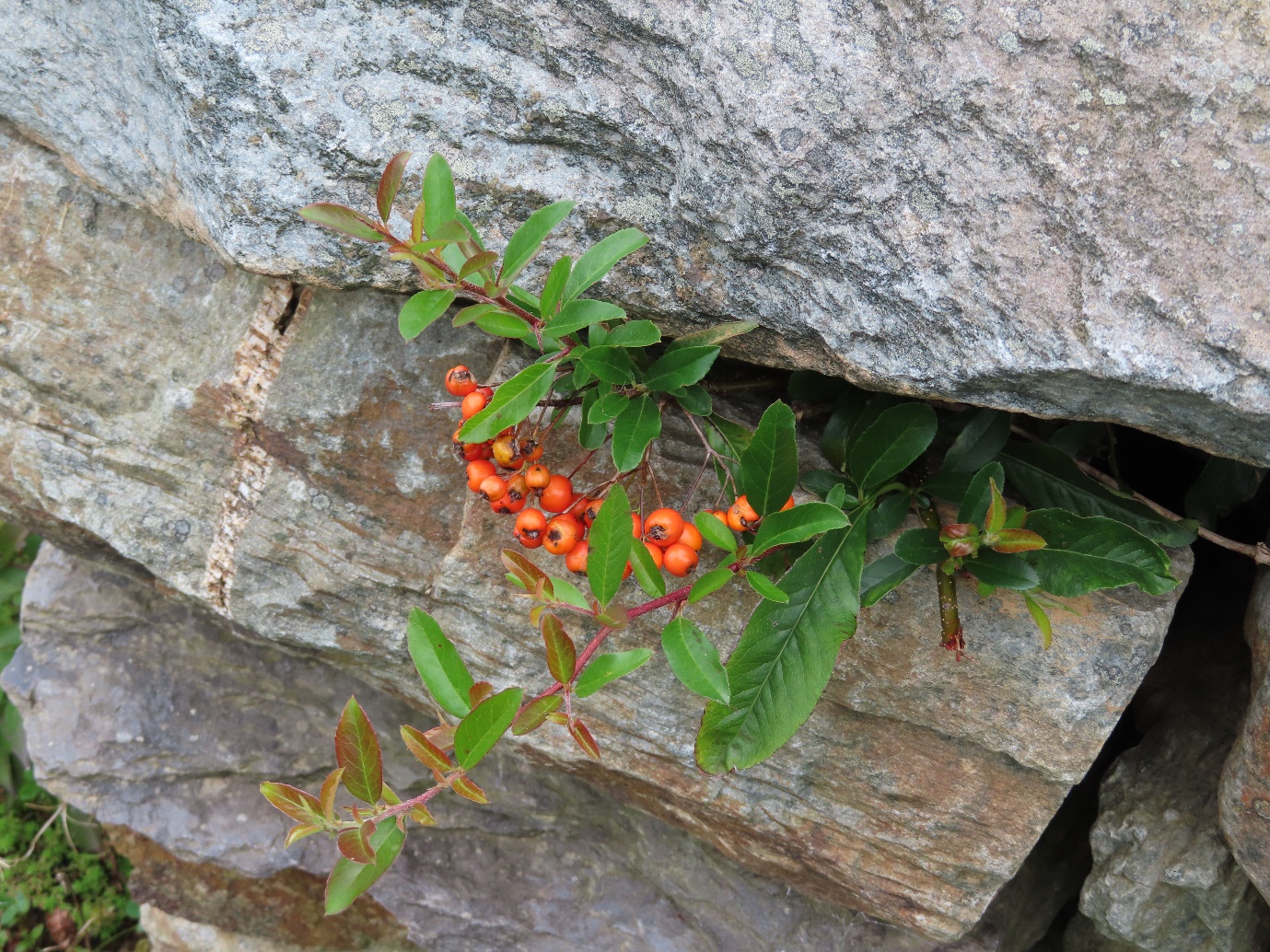 Pyracantha Orange charmer escaping through the dry-stone wall in the prehistoric garden.

I have always liked the Red Dogwood Cornus Alba as the deep red stems are a beacon in the garden throughout the winter. For some reason I never noticed until recently that they also have a very pretty white berry that contrasts well with the stems as seen below. 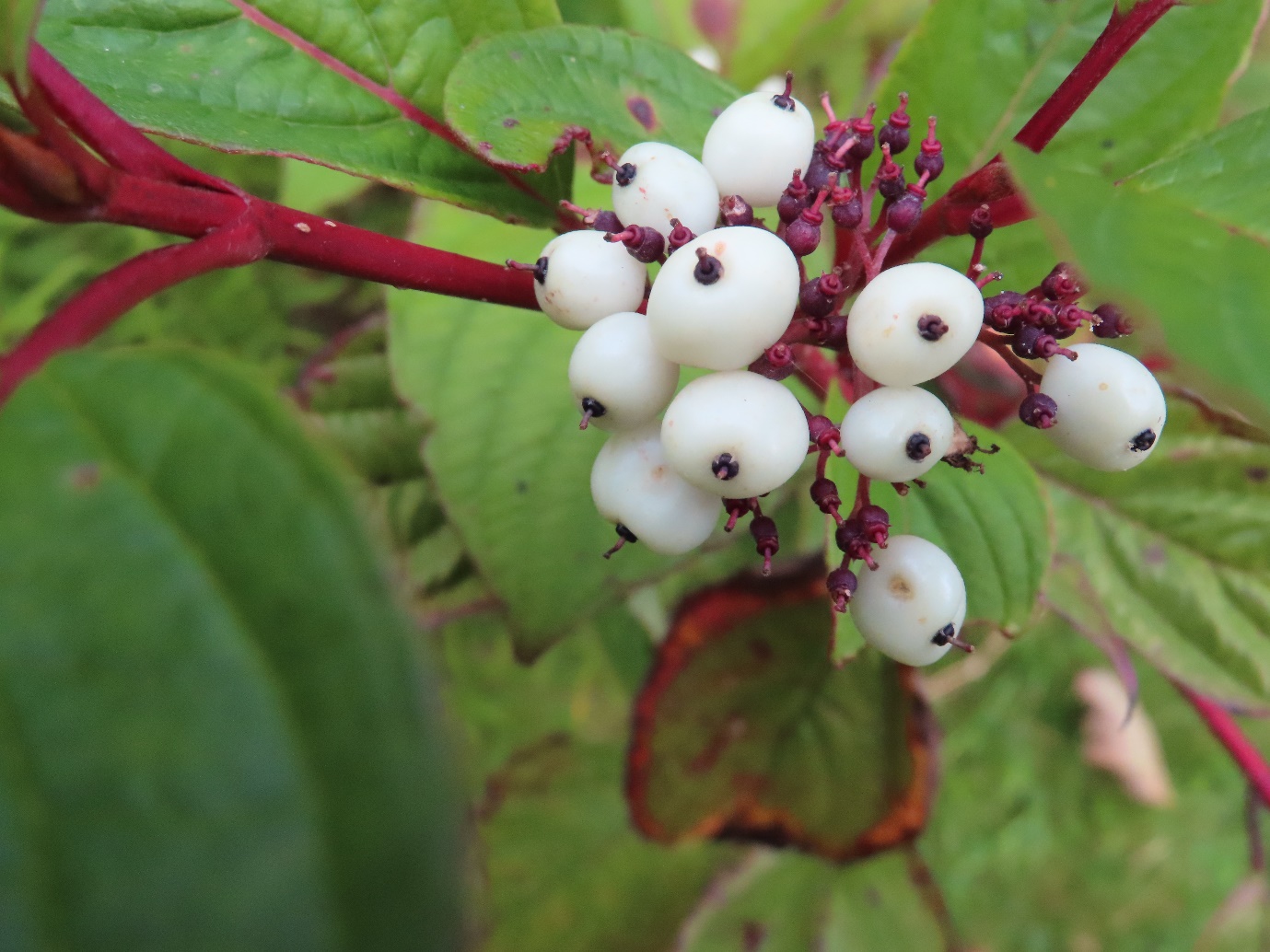 The variable weather continues. In the last few weeks the bitterly cold windy days have been followed by a short bout of high summer when it was almost too hot to work in the garden. I took the opportunity to take a break from the garden to visit some of the islands that have long been on my ‘to do’ list. It won’t be long before the ferry rides become cold and rough or are cancelled all together so this was my last chance this season. 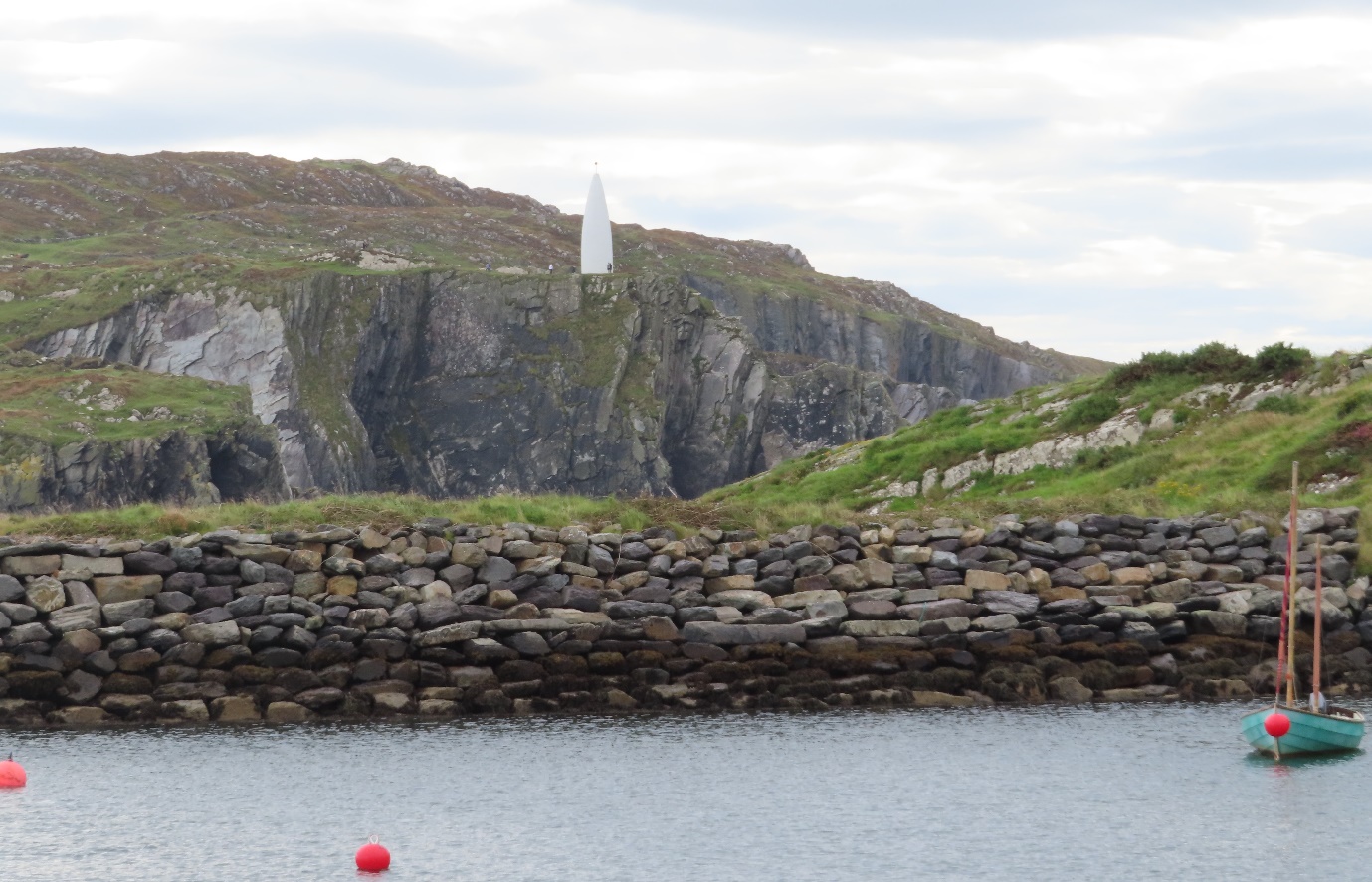 The harbour in Sherkin island looking towards the cliffs of the mainland.

Sherkin island was my first port of call. Despite the dramatic landscape there are many sheltered spots here and my garden seemed far more exposed than these. In addition, there was an abundance of ‘non rocky’ soil which was a surprise to me and I found myself creating gardens as I walked around the island and also feeling slightly envious. I could easily imagine creating a veritable paradise on a few acres here. 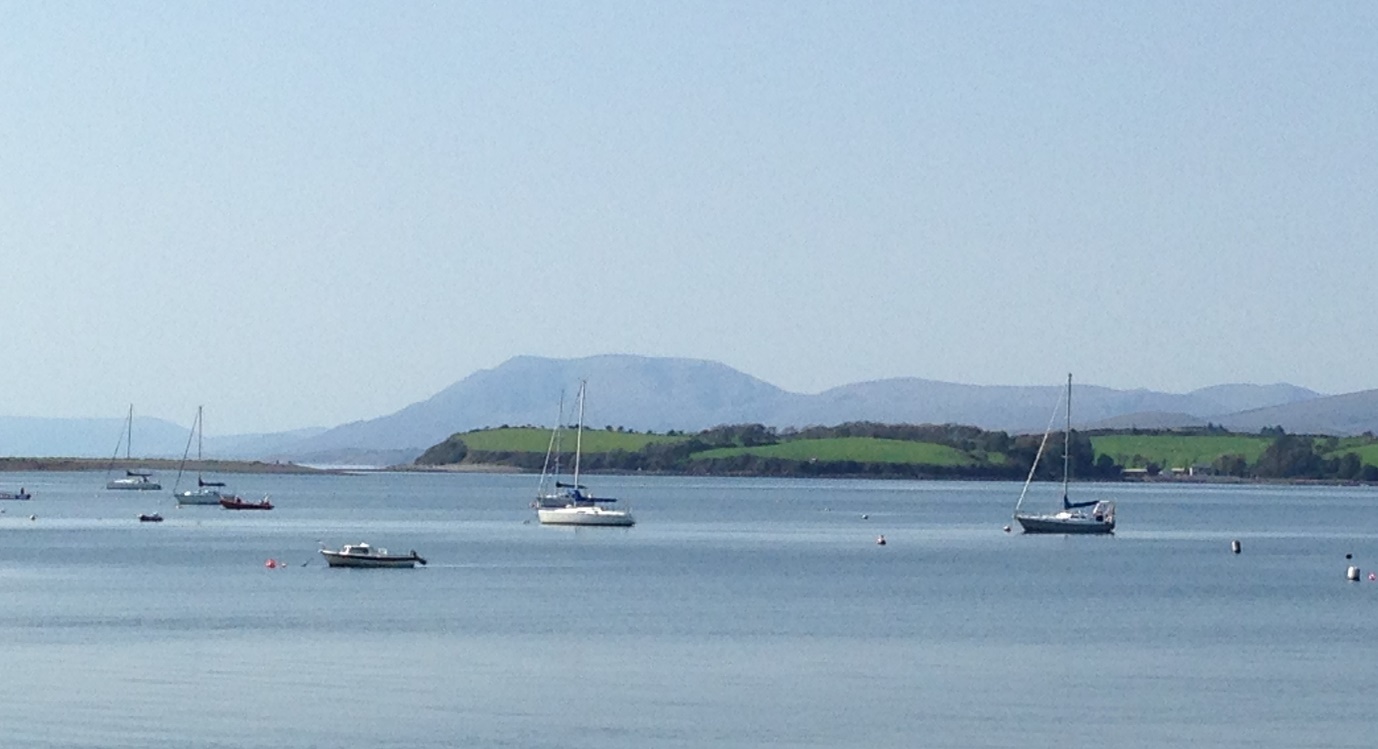 My next port of call was Whiddy island. This sits in Bantry bay and seems far more sheltered that Sherkin. The weather was as good as you could wish for the trip and the sea was like glass for the ten-minute ferry ride. It is a small island and can be covered in less than two hours. I was surprised at the apparent lack of wildflowers compared to my own garden and wonder if this is due to the fact that most of the island is given over to farming with little unused land in evidence. I did see a beautiful Common Hawker Dragonfly as it was resting on the ground and finally managed to get a photograph of one. I am sure that I do see these flying around my garden but it has been impossible to get a photograph to make an accurate identification as they move too fast for my amateur photographs.

Yesterday we had another storm orange weather warning and looking at the forecast on Met Eireann I decided that the meteorologists must have a sense of humour (maybe it is even essential). The warning included the following ‘given the time of the year with trees in full leaf, there is greater potential for wind related impacts’. I was immediately reassured as most of my trees lost their leaves weeks ago as a result of storm Ellen and Francis and all are waiting to be raked up and turned into leaf mould. I have been putting off the task as it seems ridiculous to be finishing this job before the end of September. If it was not for the evergreen shrubbery throughout my garden it would look as if winter was here.

Yet again this month we have had extremes of weather. Hot sunny days reminiscent of summer, storms with gusts of up to 120 kilometres per hour, bitterly cold winds and winter temperatures at night. As usual some of the plants surprise me with their behaviours and hardiness. The Calla Lilly below was given to me by a friend about four years ago. I have only ever seen its leaves as it has steadfastly refused to flower and I have often been tempted to throw it out. The day after the most recent storm it flowered for the first time ever. I have no idea why. We certainly have had warm days but the winds have been biting at times and the evenings chilly. I have decided not to think about it too much but to enjoy it while it lasts. 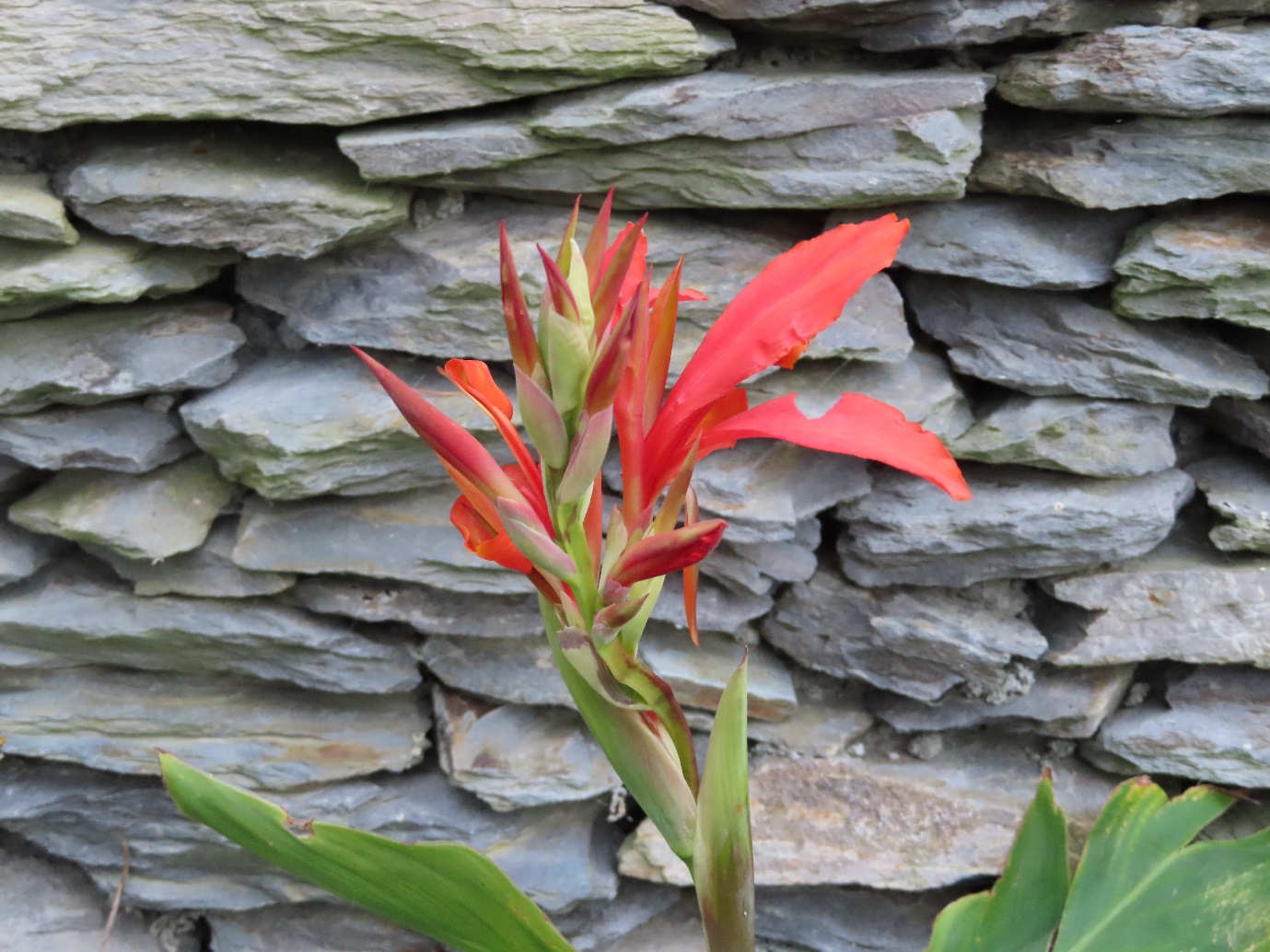 The poppies that I planted late in the summer have continued to surprise me. Sadly these two are the last of the season but I intend to plant many more next year. 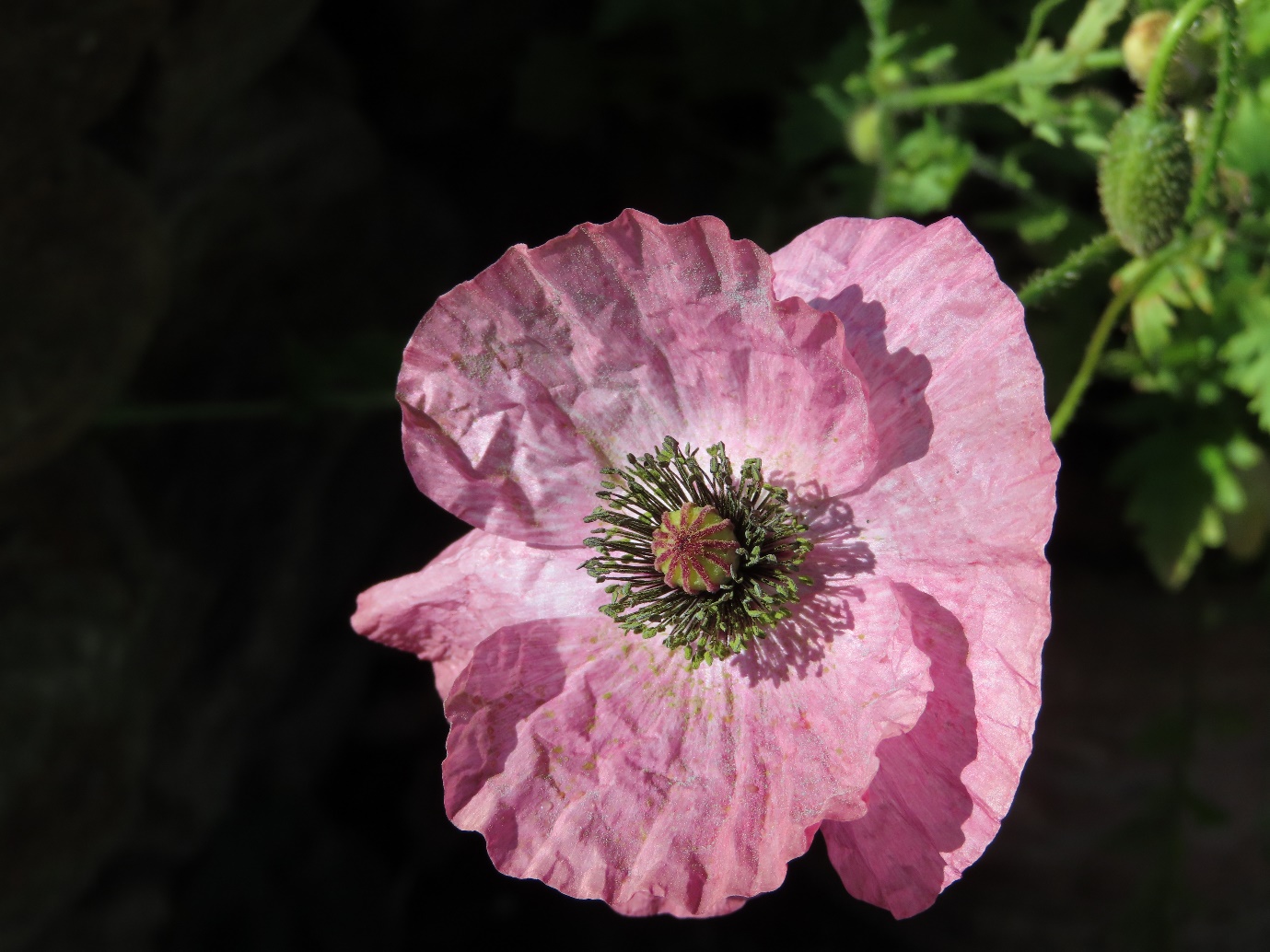 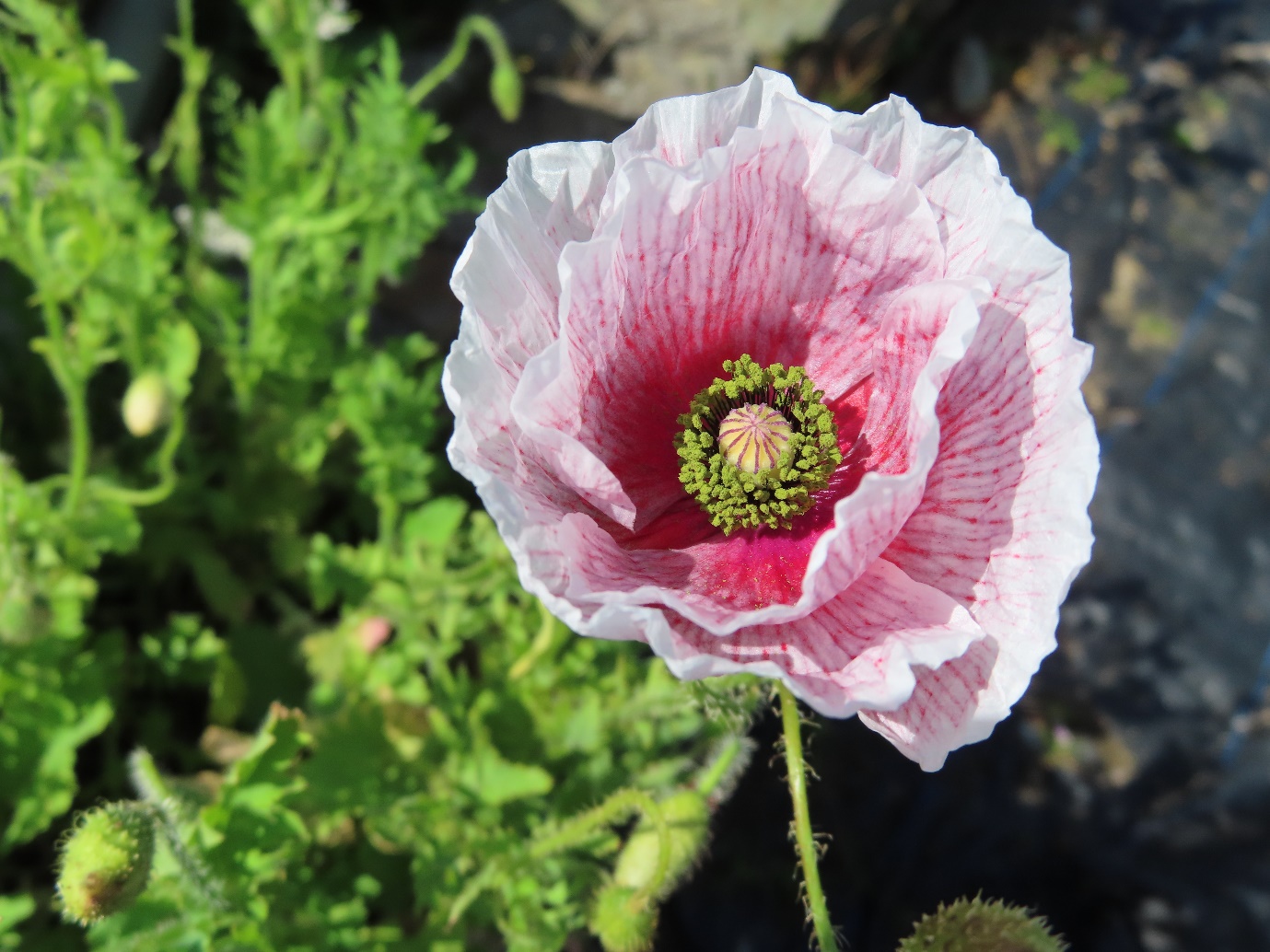 Finally, despite the fact that the trees are in winter mode the garden is still full of bees, wasps and hover flies. The wild flowers, Abelia Grandiflora, Nepeta Six hills-giant and the ivy continue to provide plenty of food and If I close my eyes it sounds as if it is still summer. 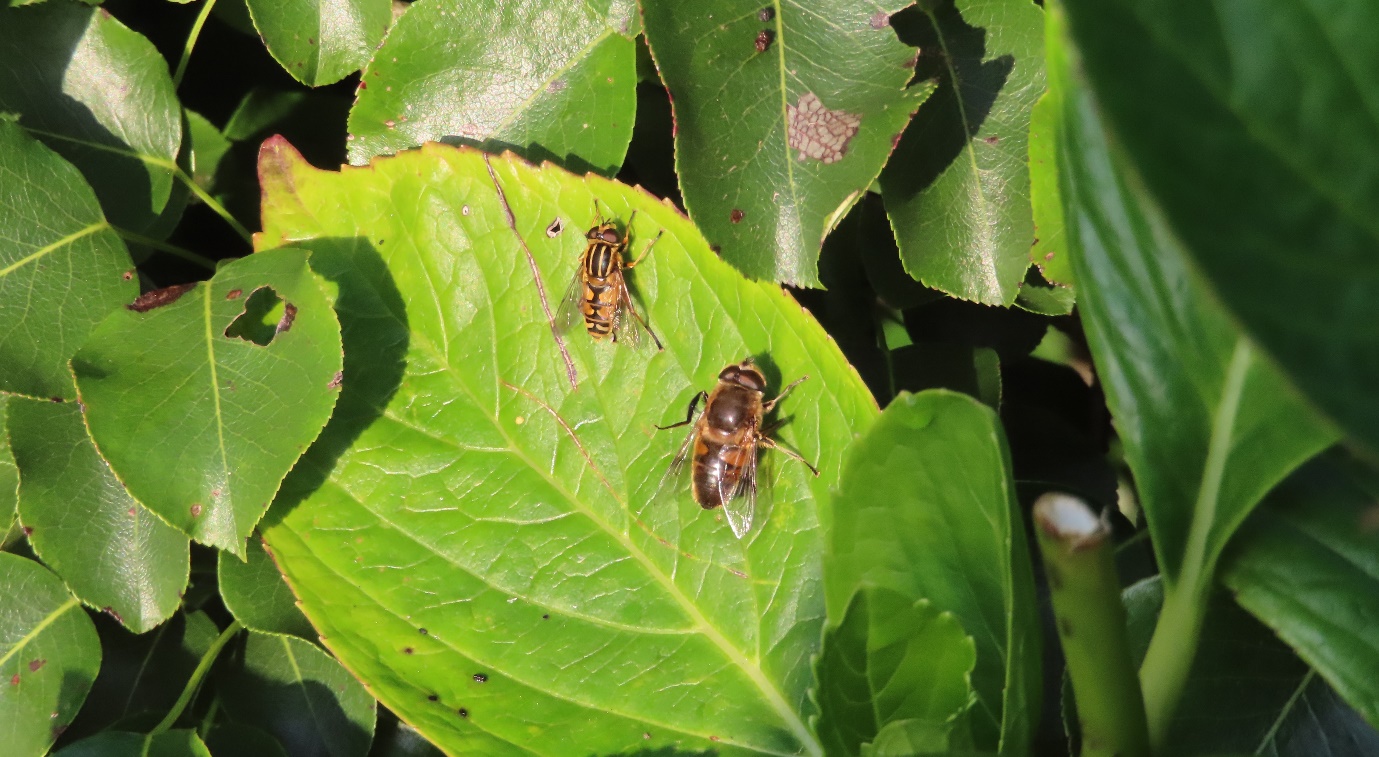