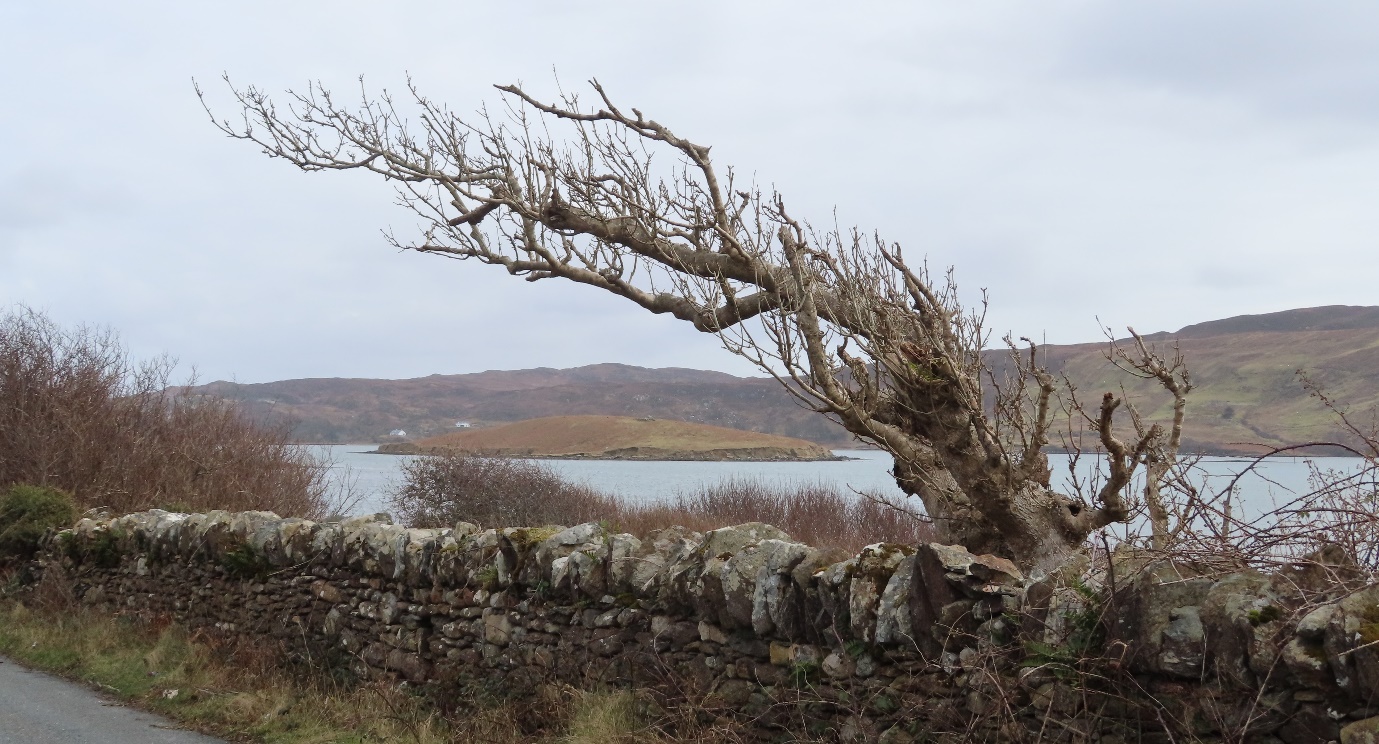 My success with growing vegetables has been rather hit and miss over the years. Until last year I was always able to produce a good crop of potatoes and enough onions to last me for the year. My leeks have been less consistent and my Brussel sprouts always did better in Scotland. My few attempts at growing carrots have been disastrous and were usually dug up and eaten by my dogs who did not seem to mind the mangled shapes. Because I would like to start producing my own vegetables in a consistent manner, I attended an ‘organic gardening’ weekend in Renvyle House Hotel in Connemara a few weeks ago. I took a slight detour through Clifden and was struck by this beautiful tree on the Wild Atlantic Way coast road to Renvyle. It would make a lovely feature in any garden even if it does indicate consistent and ferocious winds. The road was lined with many specimens and the two trees below appeared to bend towards each other in a graceful dance. I would love to have transported them all to my garden. 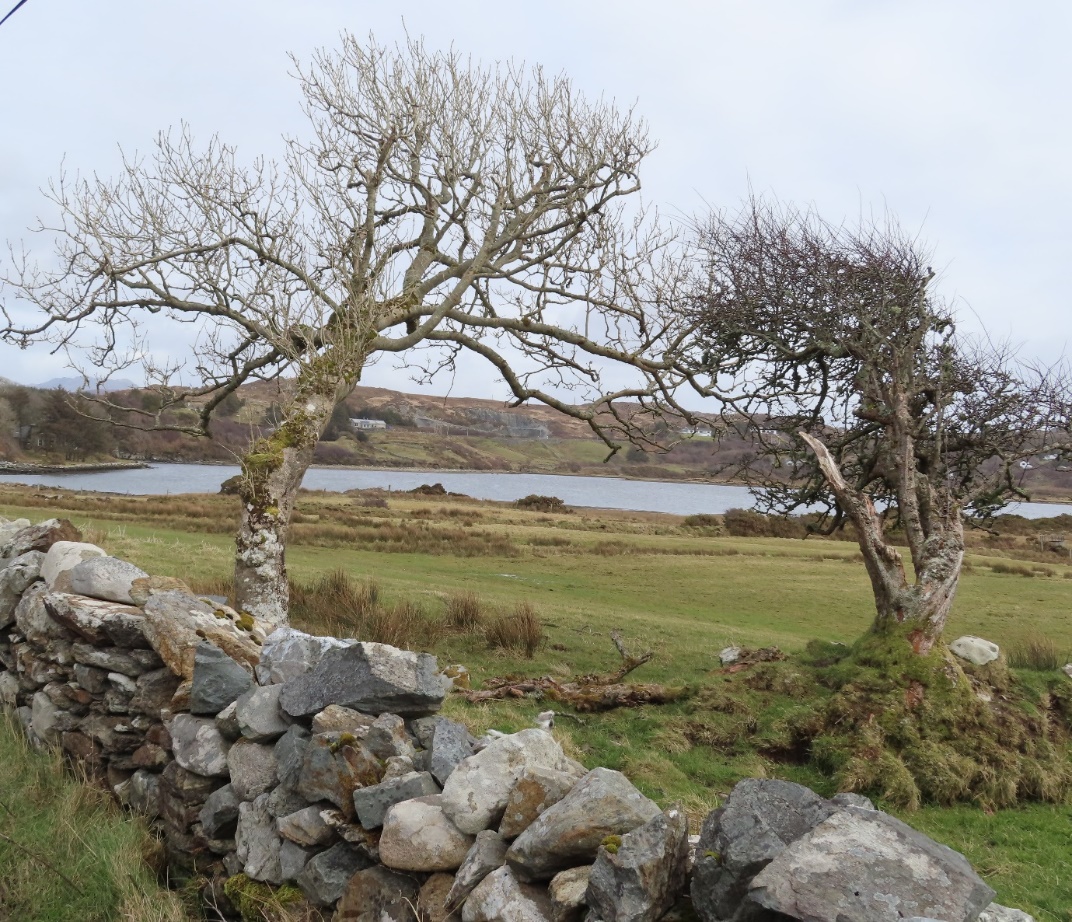 I have decided that parts of Connemara probably experience even more extreme conditions than I have here as there was not a hedgerow in sight. Apart from this I was struck at how similar the landscapes are. Although the mountains of Connemara are higher than here they also consist of bare rock embedded in boggy and rocky flat land. I am always in awe with the monumental task that was required by previous generations to carve out a few acres of arable land in these areas and who often just managed subsistence living having done so, If even that. All of this back breaking work was done without the help of modern machinery and at the end of it all you still often had just a few inches of soil covering more rock. The reclaimed stones make beautiful dry-stone walls another arduous task providing just a few feet of shelter but a lasting testament to the tenacity of our ancestors.

Renvyle House hotel the ‘long, low, sea gray house’ is perched at ‘the World’s end’ on the edge of the atlantic. There has been a house on the site since the 12th century. The house was rebuilt in the late 1920’s in the ‘Arts and Crafts’ style by the surgeon, poet and writer Oliver St John Gogarty after the previous house was burned to the ground during the Irish Civil War. Gogarty entertained many famous literary giants there and W.B. Yeats and his wife spent their honeymoon as his guests. The main house is relatively unchanged today and the superb food and the many cozy sitting areas make it the perfect place for a weekend break. The howling winds were a constant counterpoint to the peat fires dotted throughout the rooms. The talks focused on growing organic vegetables with input from Klaus Laitenberger and the weekend included a trip to the renovated six-acre, Victorian walled vegetable garden at Kylemore Abbey with the head gardener Anja Gohlke. I no longer have the patience to sit through long lectures on any topic so the informal nature of the talks was a welcome surprise. It was also the first time that it was possible to sit through a lecture nursing a gin and tonic, something I would have welcomed in my student days. In fact all in all my adult education would have been a lot easier if the educational establishments I attended had followed a similar format. 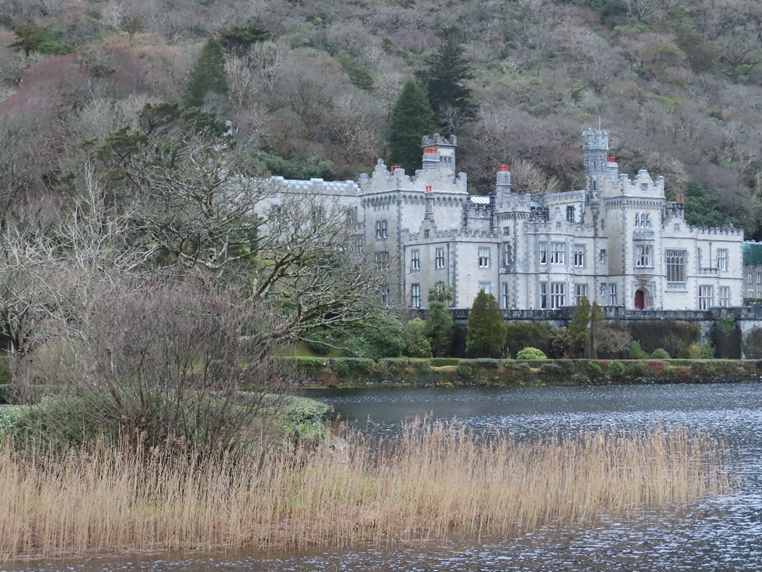 The six acre garden at Kylemore Abbey was impressive even if mostly dormant and it is heartening to see the effort that has been made to reproduce the Victorian walled garden created from boglands a mile from the abbey. It has not been possible to reproduce the 21 glasshouses which housed an extensive variety of exotic fruits but the garden uses only flowers and vegetables introduced to Ireland before 1901. I was also amused to see that it too has its pests and as I watched a small flock of six sheep being removed at haste I decided that they are at least as bad as rabbits. They seemed unconcerned about the attempts to eject them and grabbed as many heads of vegetables as possible on their way out.

Not surprisingly the weather was appalling, so I have few photographs of my visit. I do have an everlasting memory of standing in the pouring rain in the garden at Kylemore and hearing the gusts of wind roaring down the tree lined valley like a railway train and rather eerily, giving you plenty of warning of the gale force blast approaching.

I returned home determined to put more effort into my compost making and to be patient about planting my potatoes and onions in this wet and cold weather. I decided to get to work on my vegetable beds to have them ready for planting once the dry weather arrived. Sadly, this was not to be. The bad weather has continued here and the ground is too wet even for weeding. My focus has been on ‘tidying’ the garden where I can and appreciating the first real signs of spring. 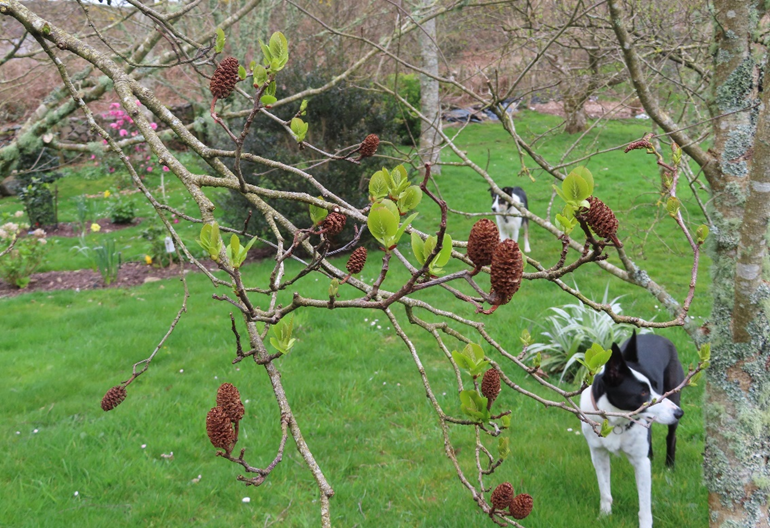 An Italian alder in the copse showing its first leaves accompanied by two of my rescue collies. This is high on my list of excellent, large trees that do well here as its glossy dark green leaves seem impervious to the salt wind. 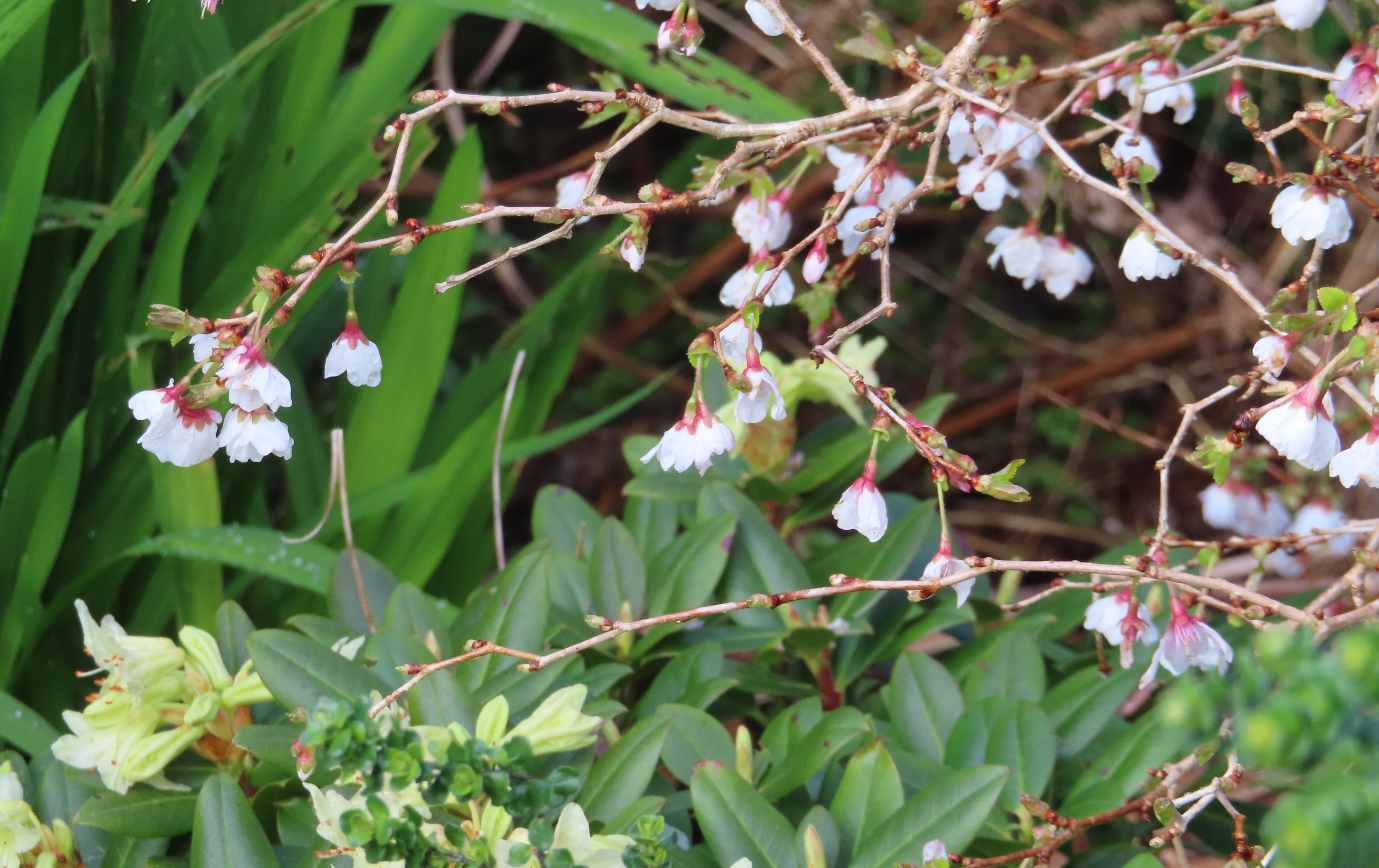 Despite the cold and wet weather I was greeted on mr return by the delicate Prunus incisa ‘Kojo-no-Mai’ in full bloom.

When planting a Senecia cineraria ‘Daisy Miller’ in a corner of my willow garden I completely misjudged how high it would grow. It is in full bloom at the moment and dominates the little corner. It has also acted as a shield from the storms of the autumn and winter and hidden behind it are some surprises. These include a miniature Azalea and a Magnolia stellata both in full bloom. 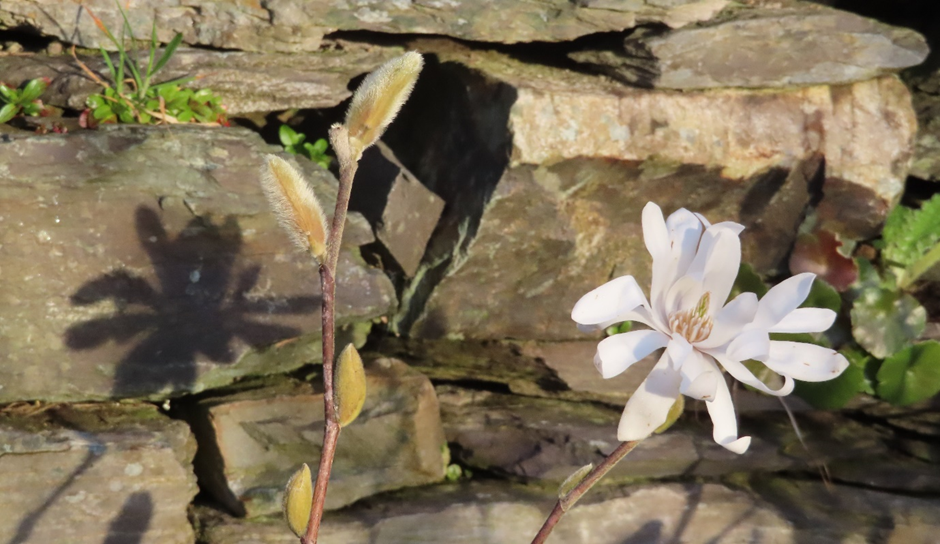 The first flower on my ‘hidden’ Magnolia stellata

At last two days of sunshine. The bees and butterflies are now coming out in their droves and are paying particular attention to my Prunus incisa and its neighbouring Hebe with an occasion visit to the Magnolia stellata. 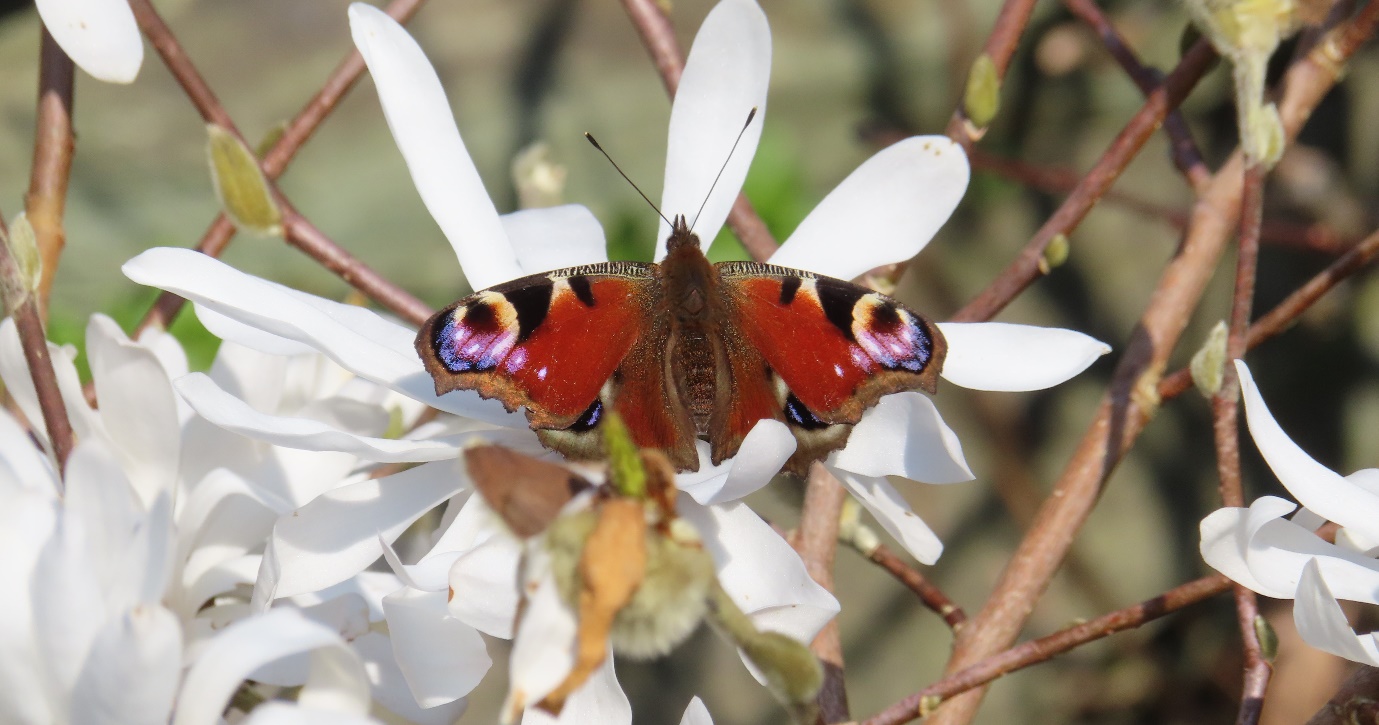 Beautiful as a Magnolia stellata is, it is perfection when coupled with the first peacock butterfly of the year. 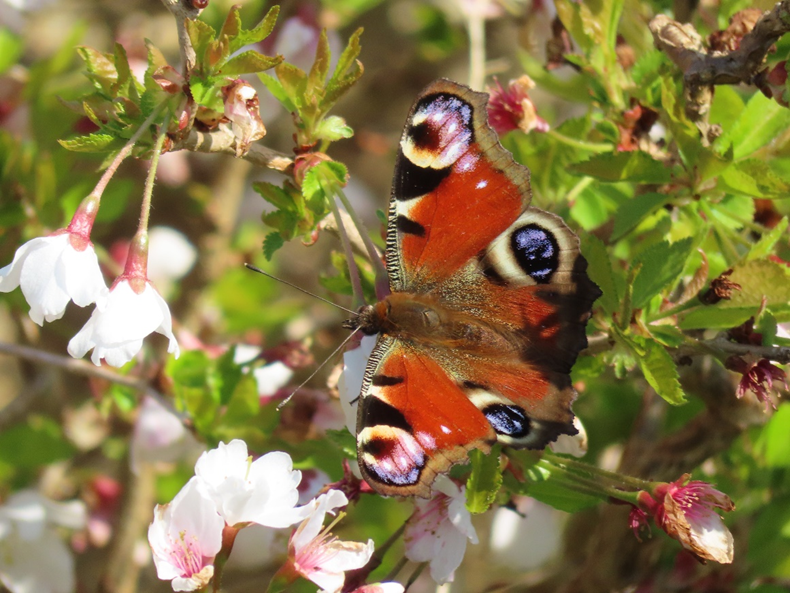 In my early gardening days, I thought of wild flowers as something that you planted in a designated area of the garden rather like some exotic plants. I even looked at seed catalogues to see what I would buy. My rural garden in Scotland taught me that this was a waste of time and I have had a similar experience here. West Cork is ablaze with wild flowers throughout the spring and summer months. All that I have to do is to leave areas of the garden alone and the flowers do the rest. The bank behind my house is a case in point. When I arrived here it was covered in grass manicured to an inch of its life. I continued this practice for a year or two despite the difficulties of cutting such a steep area. I was tardy one spring and was charmed by a variety of wild flowers that appeared throughout the season. I now leave as much space for wildflowers as possible particularly as different varieties favour different sites. The few formal lawns have been destroyed by the dogs so most grassy areas are cut just twice a year. At the moment there is an abundance of Lesser Celandine, Violets and Dandelions (now designated a wild flower by me as the bees love them). There is one solitary Scarlet Pimpernel, some Common Ramping Fumitory and a Sea Carrot although it seems a bit early for them yet. In all I have identified over sixty varieties within my garden and I am sure there are many more. What I cannot understand is why I don’t have one specimen of the many wildflowers growing in the neighbouring hedgerows. I have been tempted to try and take seeds from a few but have decided to leave well alone and let the garden make its own choices. 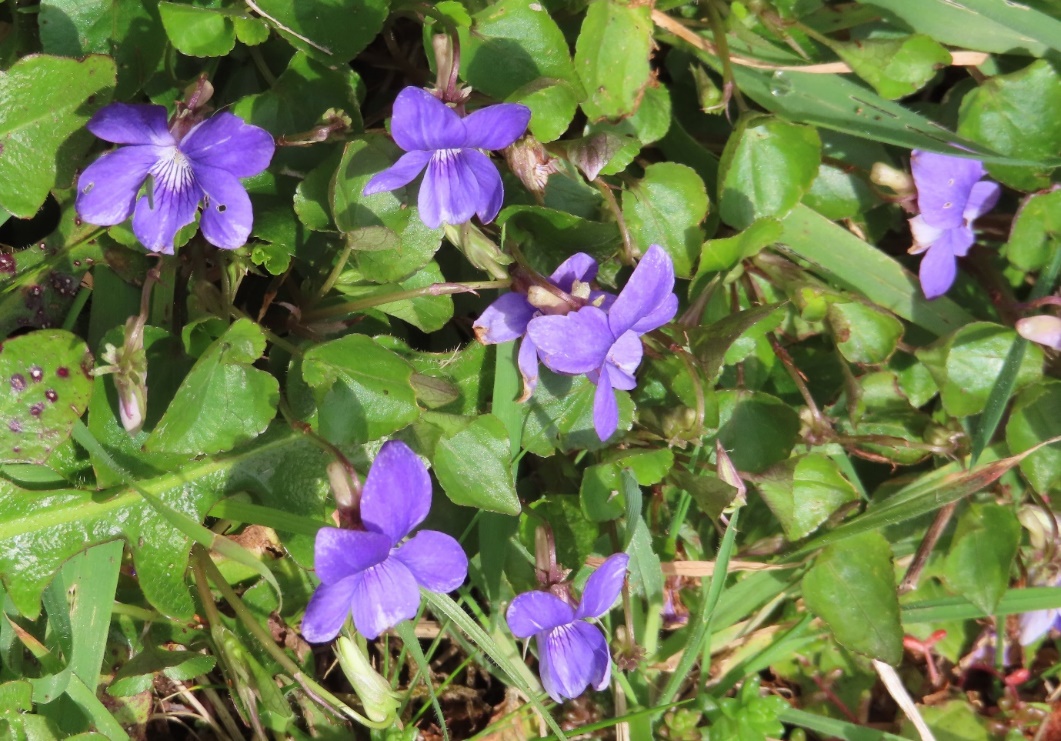 Violets covering the bank behind my house. 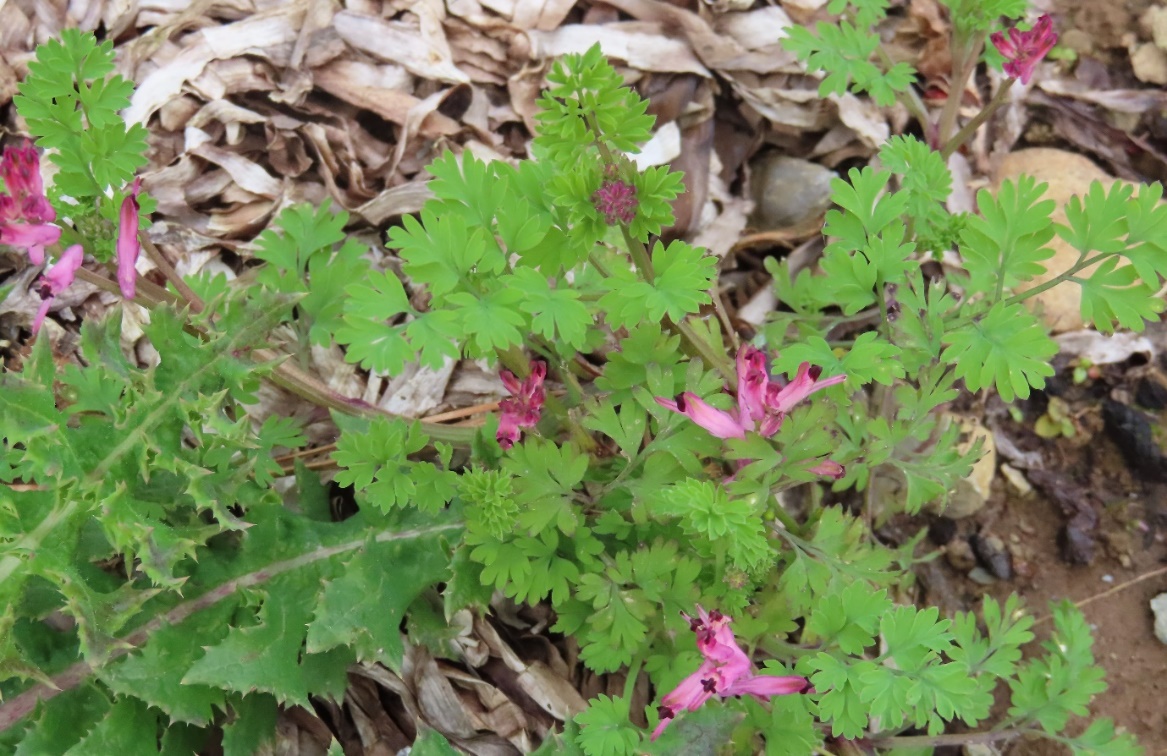 One reply on “Living Sculptures”

Excellent Julie. As you know we were in Renvyle in the Autumn. Very much the edge of the world. And I spent some time reminiscing on the time the Power family went there as kids. A lovely setting.