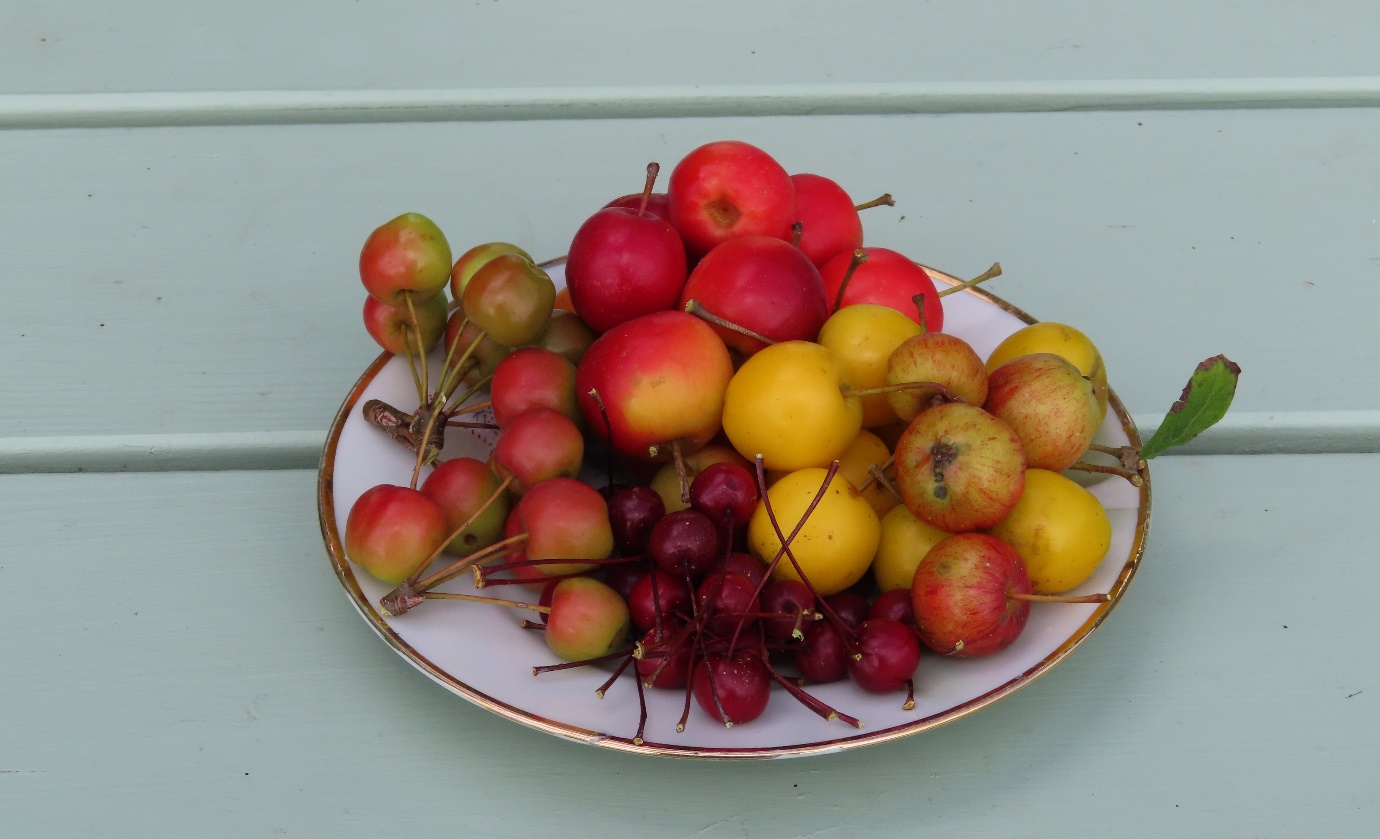 Five varieties of crab apples growing well in the garden

I am still suffering from the loss of my entire season of soft fruits which were destroyed when the freezer cut out in a recent thunderstorm. I rely on the cordials made from blackcurrants, red/white currants and rhubarb for my daily dose of organic anti-oxidants and vitamin C. My rhubarb did not do very well this year and I have already consumed the small amount of cordial that I was able to make. Meanwhile, I have been watching the birds start to demolish the rosehips throughout the garden and have decided to have one more try at making rosehip syrup before they ‘clear me out’.

My last attempt to make rosehip syrup was in Scotland over twenty years ago and was a total disaster. I had planted a bank of Rosa Rugosa along the driveway that was almost one hundred feet long. In Autumn this provided a stunning display of yellow leaves and deep red rosehips. They were so plentiful that the display was not affected by my removing a large bowl of hips for my culinary attempts. I have always liked the idea of self-sufficiency and as I placed the bowl in the kitchen, I felt a great sense of satisfaction and imagined bottles of syrup lining my kitchen shelves. This was quickly dispelled after I had prepared the other ingredients and utensils and I returned to the rosehips. The area of the kitchen looked like something from Alien. Dozens of earwigs swarmed about the counter top and onto the floor. Many disappeared into the internal workings of the kitchen never to be seen or trapped again. I soon learned from this experience that earwigs can give a sharp nip if they are displeased with you so it was with great distaste and care that I quickly dispatched the rest. This involved dumping all of the rosehips that I had carefully picked as I could not bring myself to open each one to check for more earwigs. Nor could I bring myself to continue with the syrup after this and I have contented myself with using soft fruit from the garden for many years since. 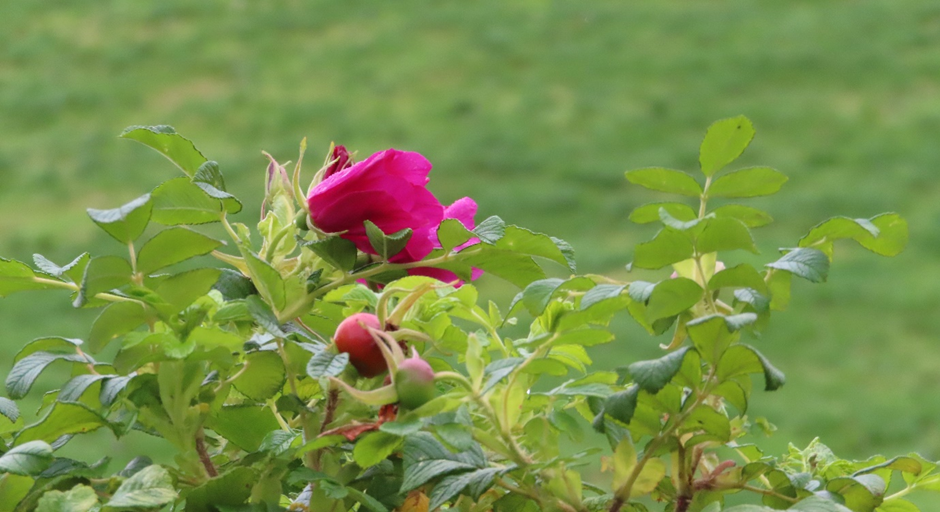 Blossom and rosehips on a Rosa Rugosa

Today I overcame my misgivings in my desperation for my own Vitamin C. This time one kilo of rosehips only netted twelve earwigs. The whole procedure was less traumatic than the previous one and only a few insects escaped into the kitchen itself. However, I processed my second batch of rosehips in the garden to ease their removal and protect the kitchen from another invasion. I used the River Cottage recipe of one kilo of hips to 1.25 litre of water. I reduced the sugar content to 600 grams as I usually find that the syrup is too sweet if I use the full amount recommended. I have now also learned to make this on a sunny day in the future so that the processing of the hips can be safely done in the garden! 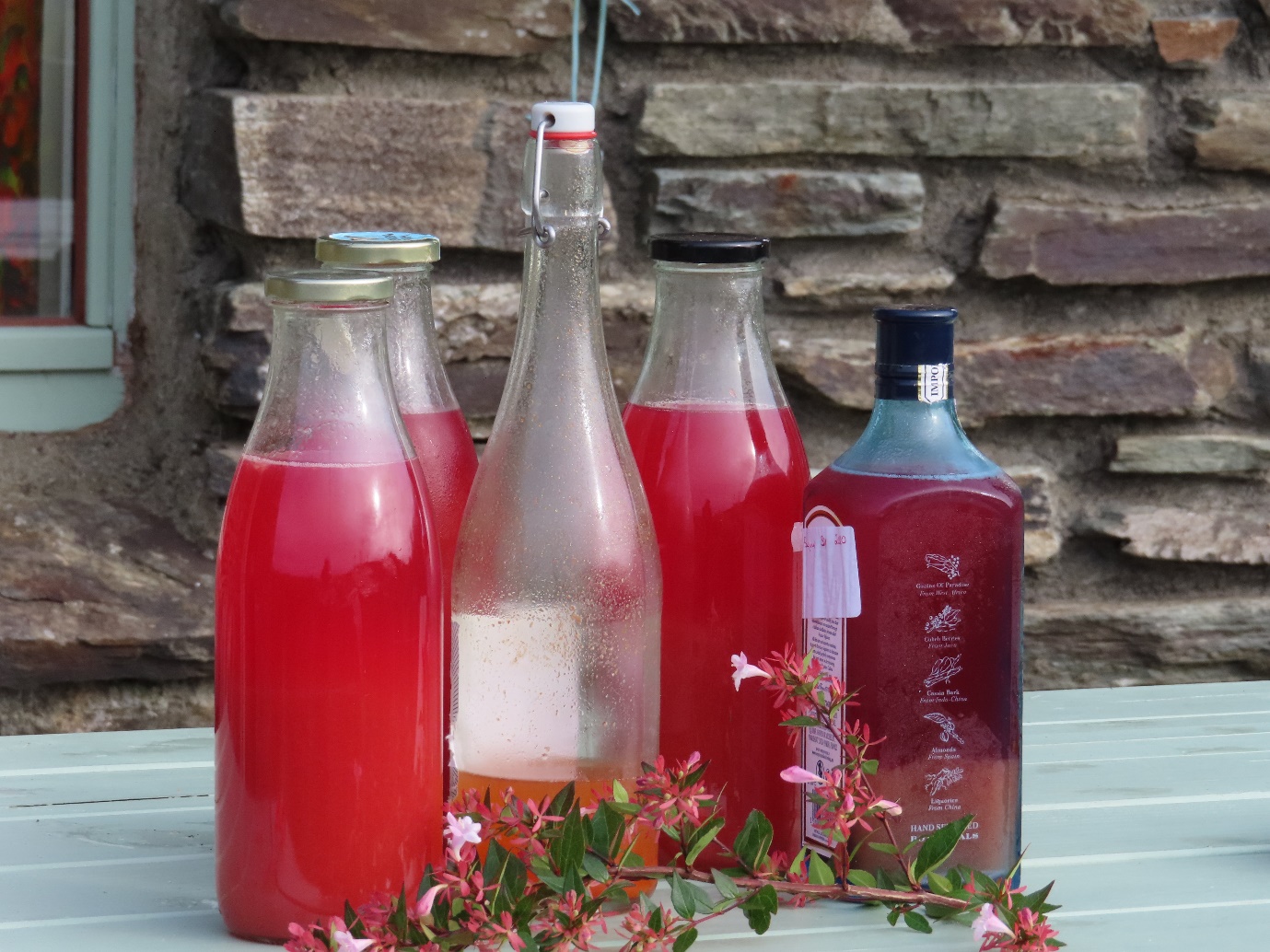 I also made some crab apple cordial and now have 10 litres of both stored in the fridge. This should last me for many months and makes up for the loss of my soft fruits. As you can see from the photograph, the cordial is rather cloudy and experts would probably be horrified as I used a nylon sieve in the absence of muslin. I could strain it again but I am not too fussy about having minute particles of fruit in the drink. In fact, I think it adds to its natural quality and I will consume it all with pleasure. The rosehip syrup has been a particular treat as the aromatic flavour is very pleasing. I have also added fresh ginger to one batch of crab apple cordial so it will be interesting to see how it tastes.

Compost making has occupied a lot of my time over the years. Apart from getting the proportions right and ensuring that it breaks down properly, there are two other issues that I have to take into consideration: aesthetics and rodents. I don’t really like the plastic compost bins although you can make them rodent free with a bit of work. It is also difficult to mix the contents unless you empty the bin to do so and they are not very attractive. I have worked with ‘pens’ made out of pallets and these do make turning easier but they also are havens for the said rodents. Someone recently showed me how to make a free-standing compost heap as shown in the photograph. The trick is to build the sides first and then fill in the centre. The sides are relatively straight and so the heap is very stable. Cover it with a pure wool carpet as I have done here and it is all set up for the winter. The big advantage is that all sides are open so even if rodents try to move in the dogs have easy access to dispatch them. I really like the look of these as they seem very natural and blend into the garden whereas plastic bins stand out. This heap has been robust enough to withstand my three dogs making tunnels in an effort to catch some creature that tried to move in. I will still need a few plastic bins to compost my kitchen materials but I can find a place to hide them away. 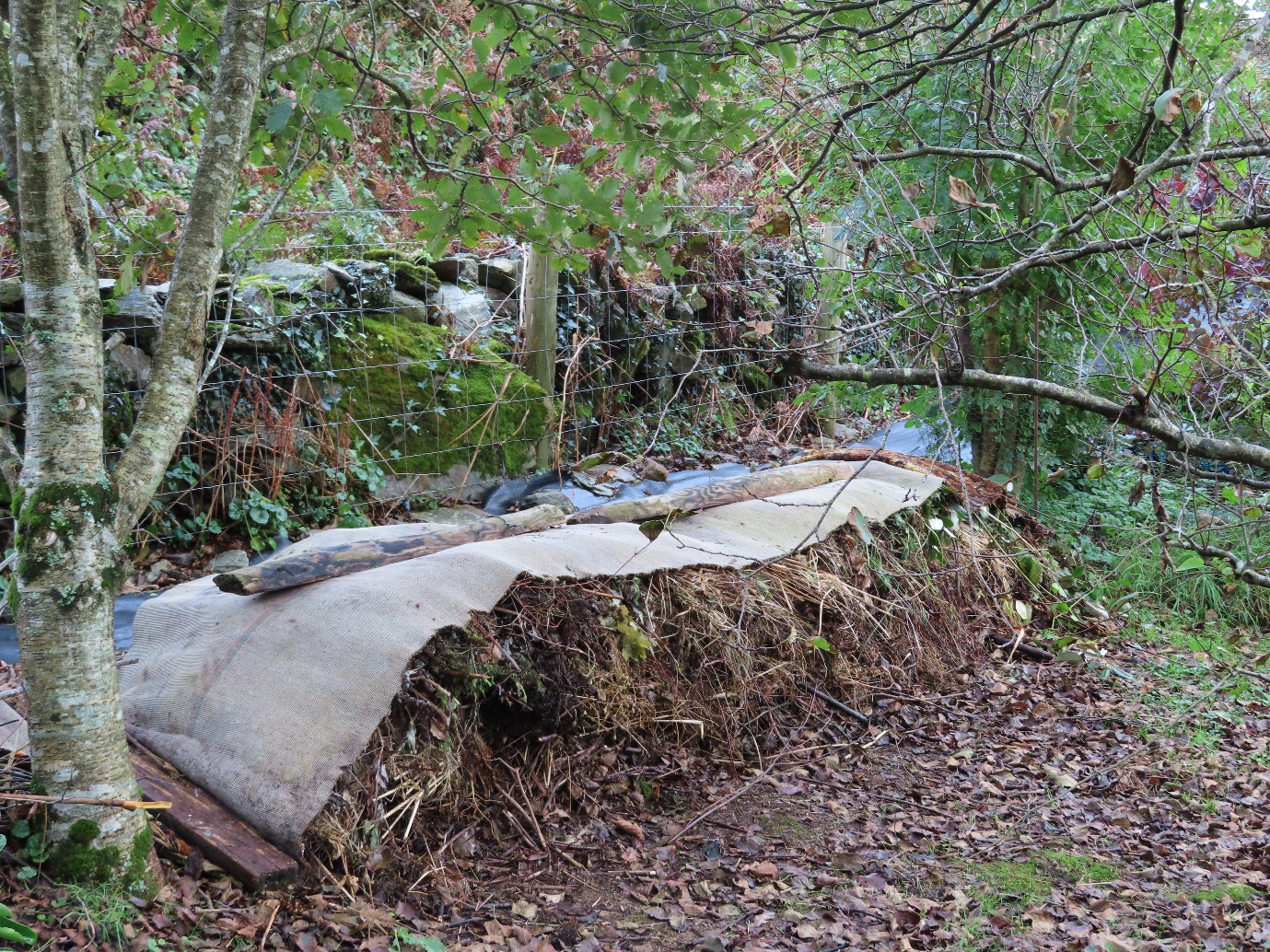 I am still eating my potatoes despite the smaller crop than usual. I have just finished the last of the summer leeks and hope to have winter ones soon. My onions are storing well although the crop was smaller than usual. My courgettes have been a total disaster. Throughout the last few months, they have produced an abundance of flowers. This has yielded three courgettes. Despite the cold weather they are still producing flowers and I have no idea what they are up to. I did get this rather nice photograph of a caterpillar getting some benefit from the flower but as it may be the cause of my problems it is a mixed blessing. 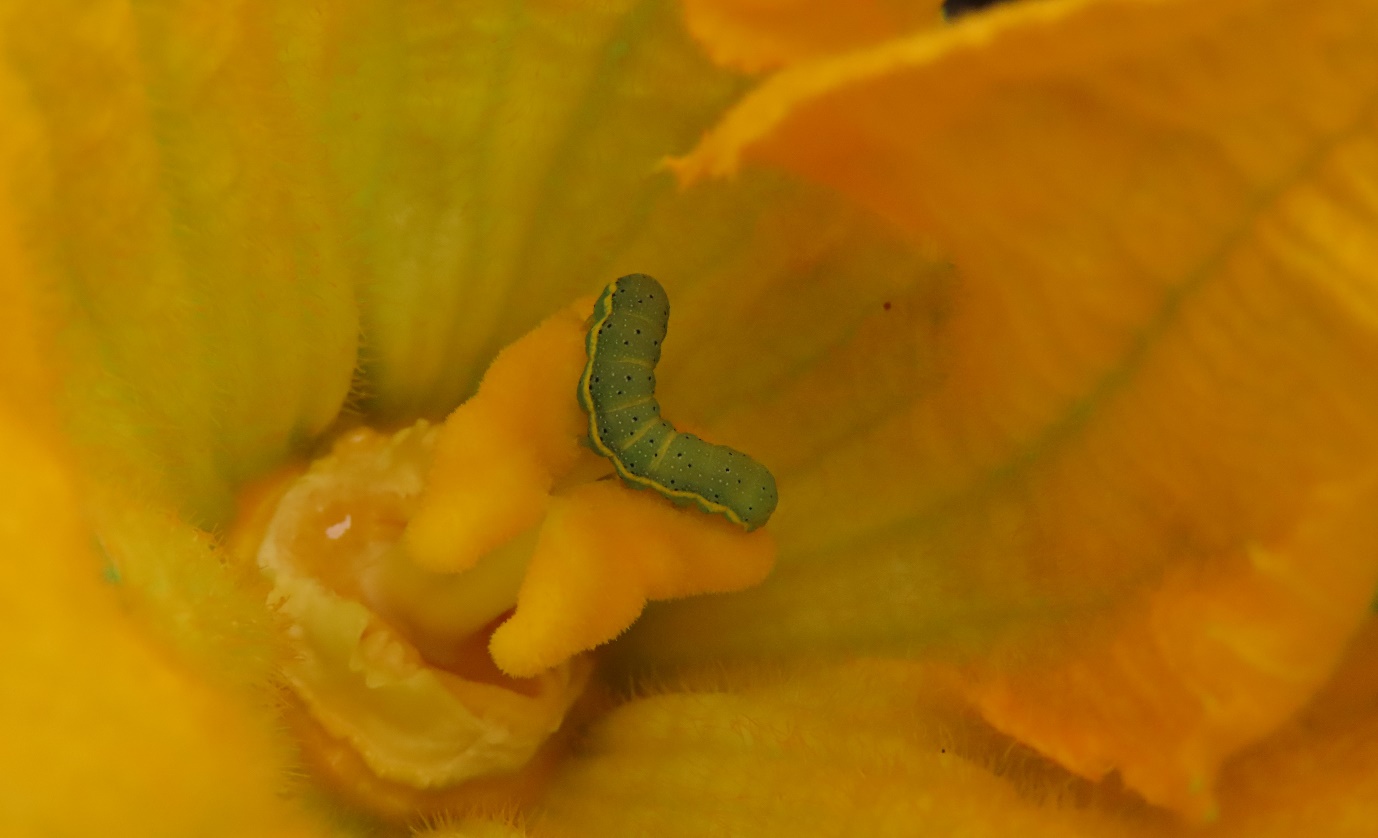 There is still colour in the garden and as usual the mallows are covered in blossom. Some hypericum shrubs are still full of flowers whilst others have been reduced to bare stalks. I need to check to see if this is related to a particular variety or the location of the shrub in the garden. 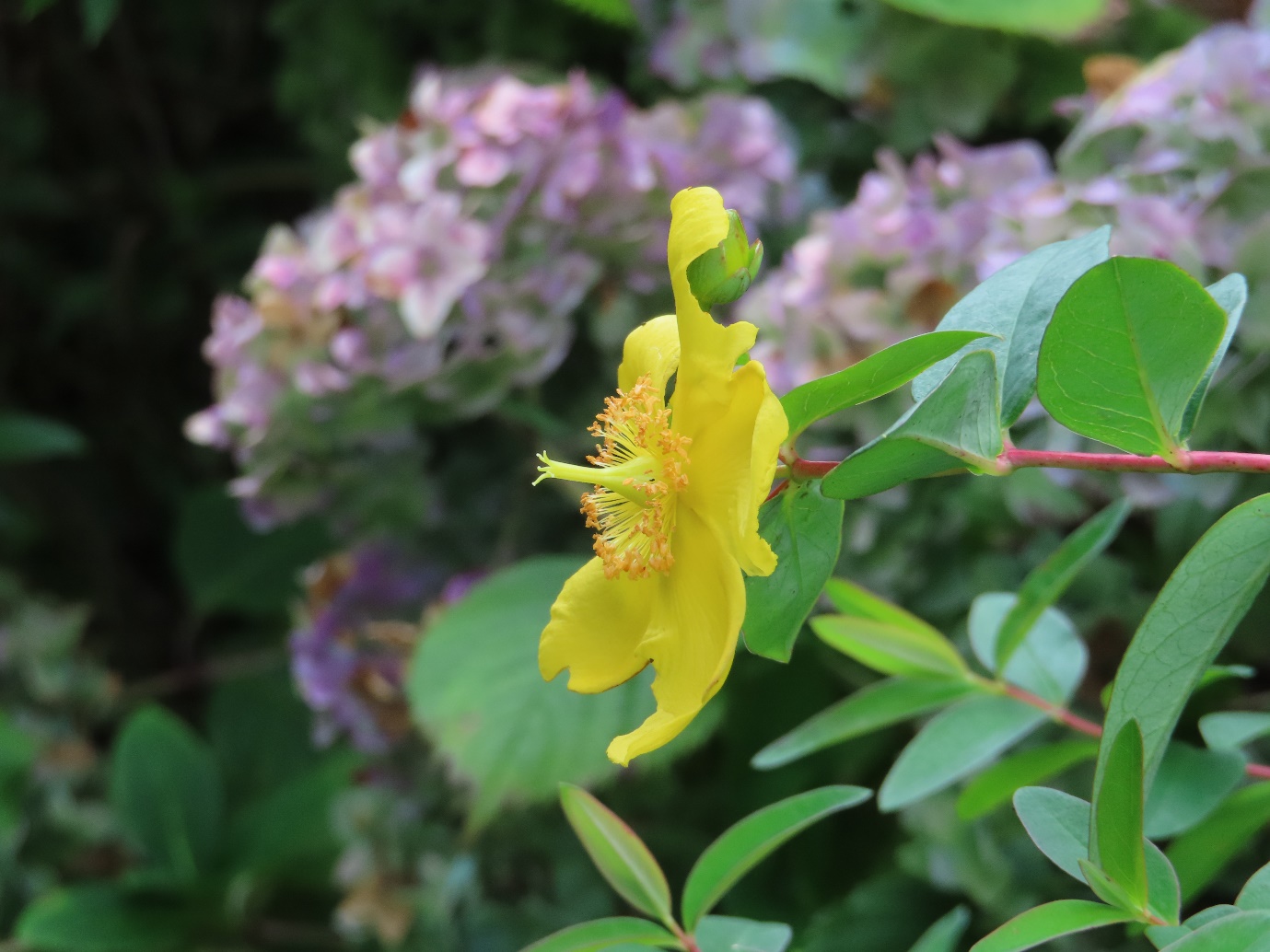 Just a few weeks ago a sunflower appeared in the garden. I have never planted any so I assume that a bird brought the seed in. I was sure it would come to nothing as it is very late in the season but to my amazement it flowered last week. I am equally amazed that it has remained upright despite the strong winds that have been constant for some time now. It looks as if after 9 years of hard work my hedgerow/shelter belt on the west side of the garden in working. 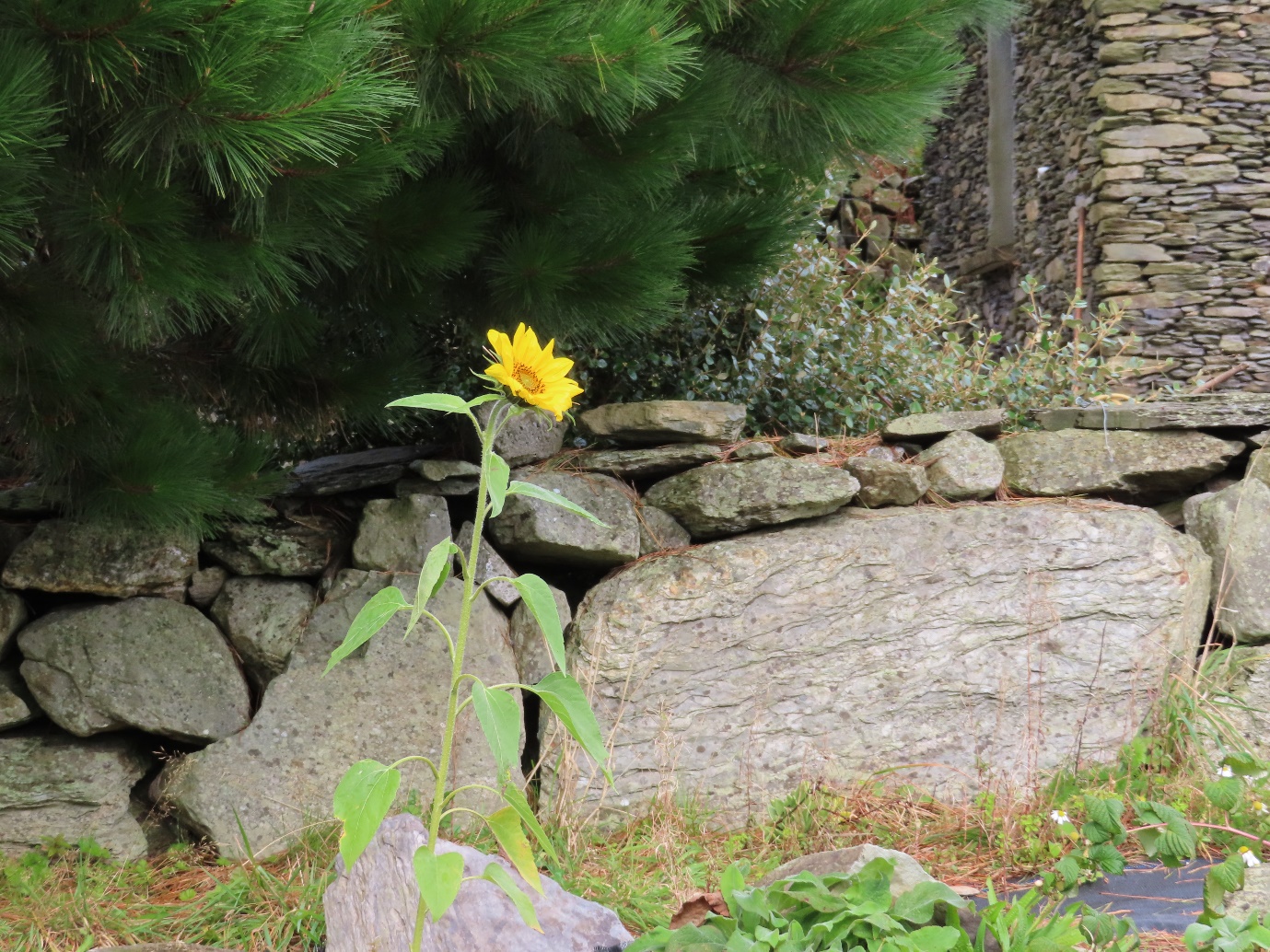 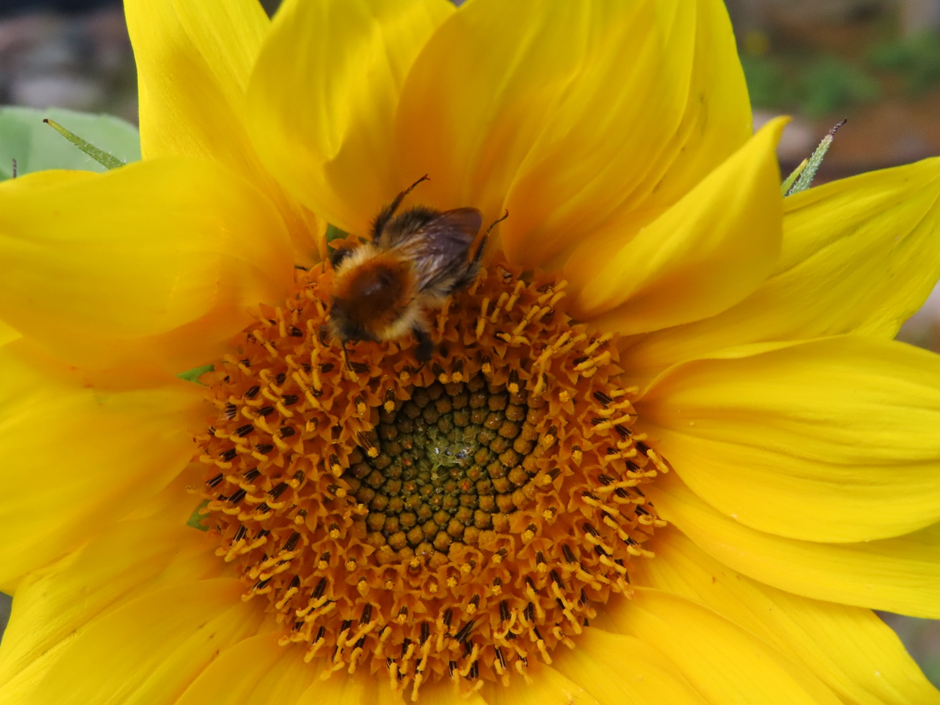 The bees have been fighting over this one flower so I will probably try and plant some more next year. 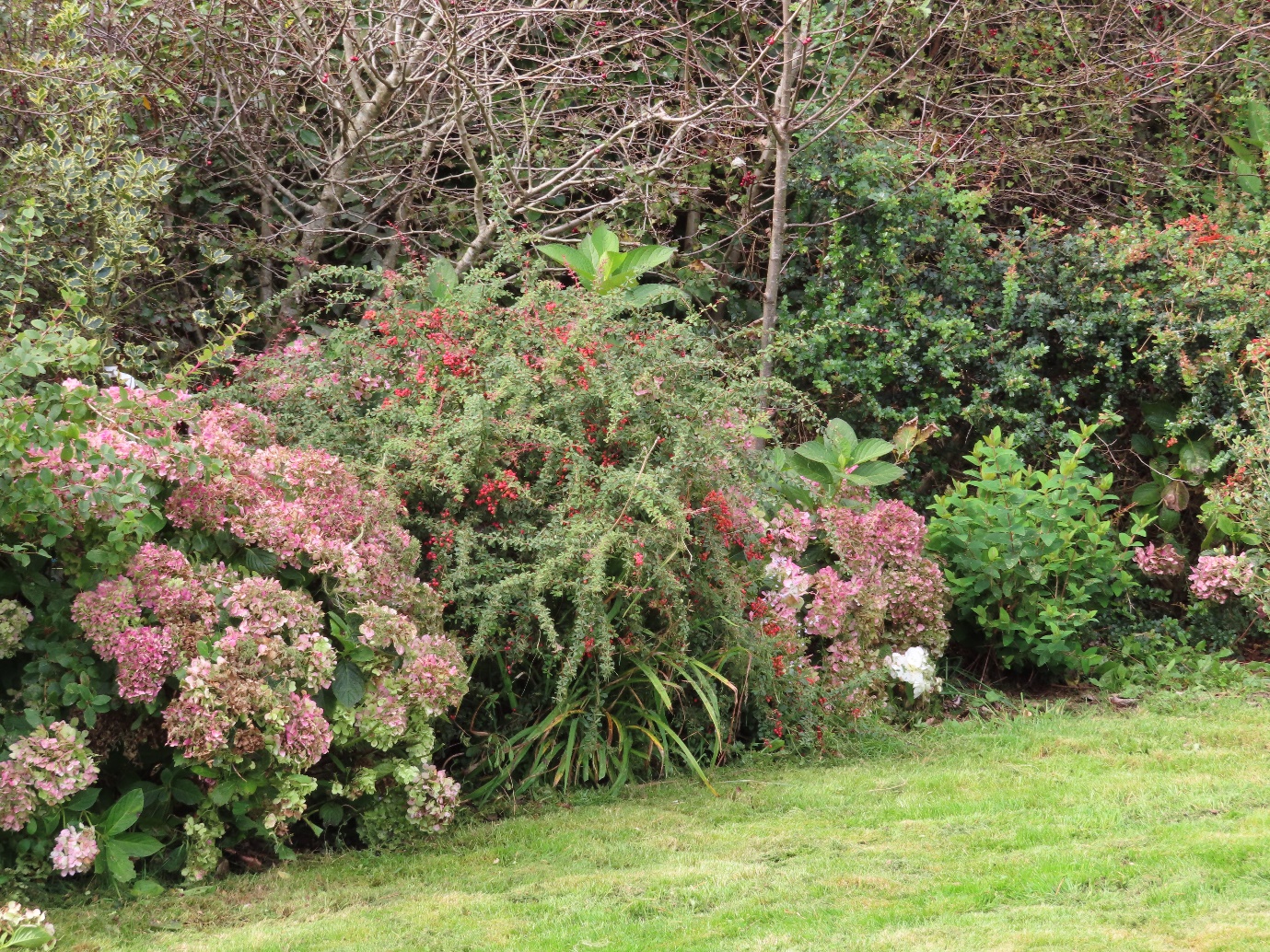 Part of the hedgerow on the west side of the garden

The hedgerow consists of variety of evergreen and deciduous trees and shrubs including various berberi, hawthorn, eleagnus, holly, rosa rugosa and hydrangea. In places it is almost ten feet high and replaces a barbed wire fence in an open field.

Not everything has to be in flower to look dramatic. Below are the remains of the artichoke flowers which I featured in a previous post. This plant is at least five years old and so far, seems indestructible. 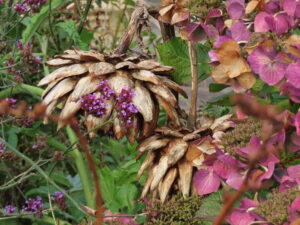 This curious creature was removed from the herbaceous border by my dog Millie. She did not seem to have any interest in harming it but was obvious curious about it. So was I and quickly discovered that it was the caterpillar of the Elephant Hawk Moth. It does resemble the trunk of an elephant and can move quickly to get to safety as I observed when I kept the dogs away. I also discovered that the caterpillar and moth have a limited variety of plants that they eat or use. These include rosebay willowherb, fuchsia and honeysuckle. This now gives me two reasons for protecting the willowherbs in the garden the second being their graceful flowers. 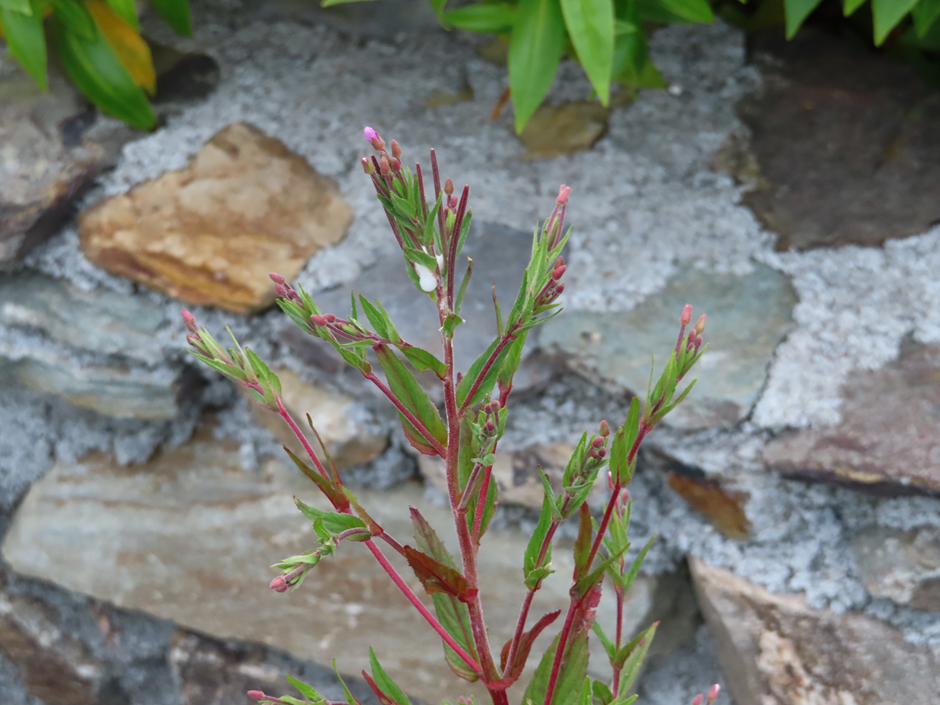 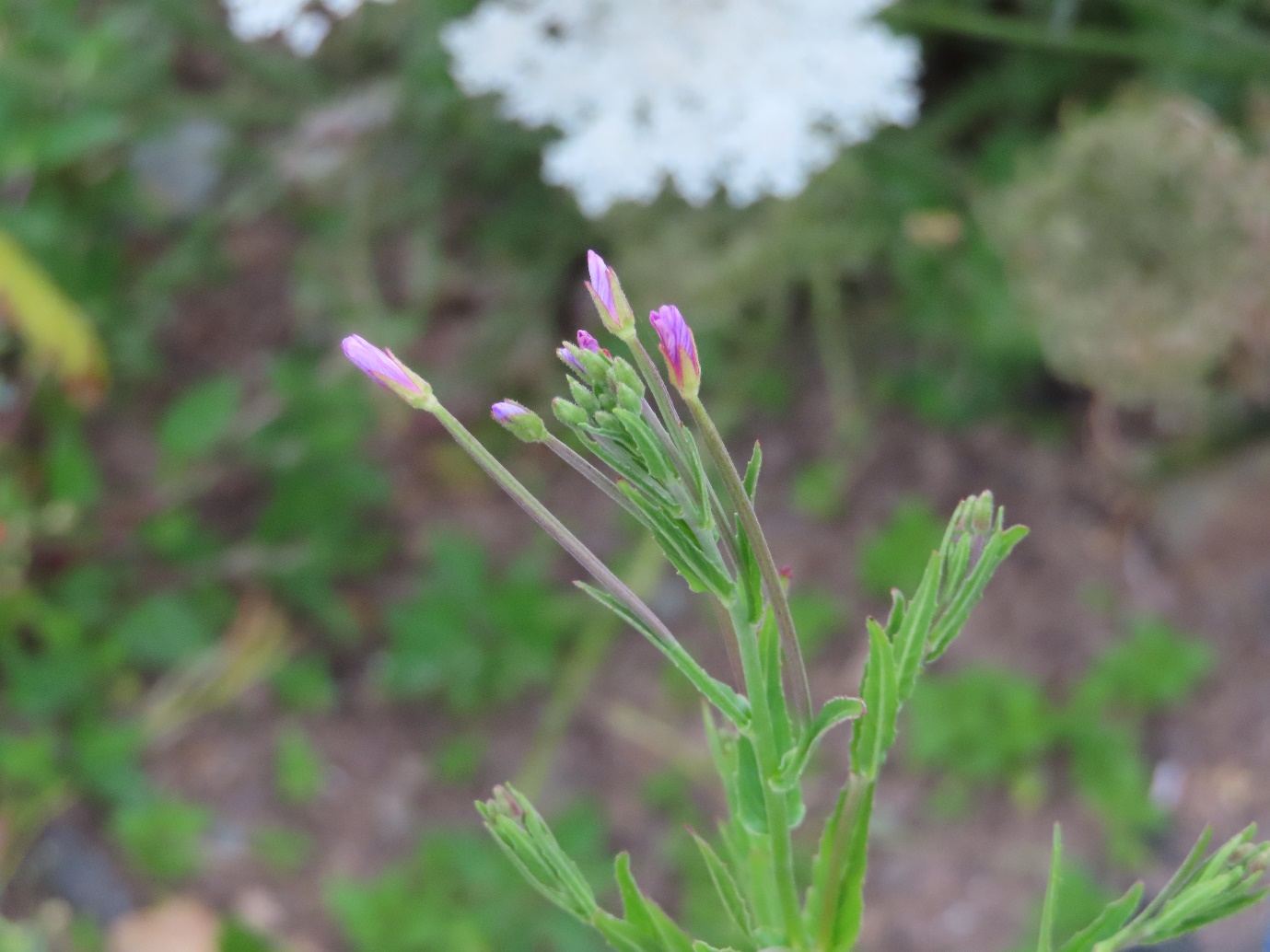 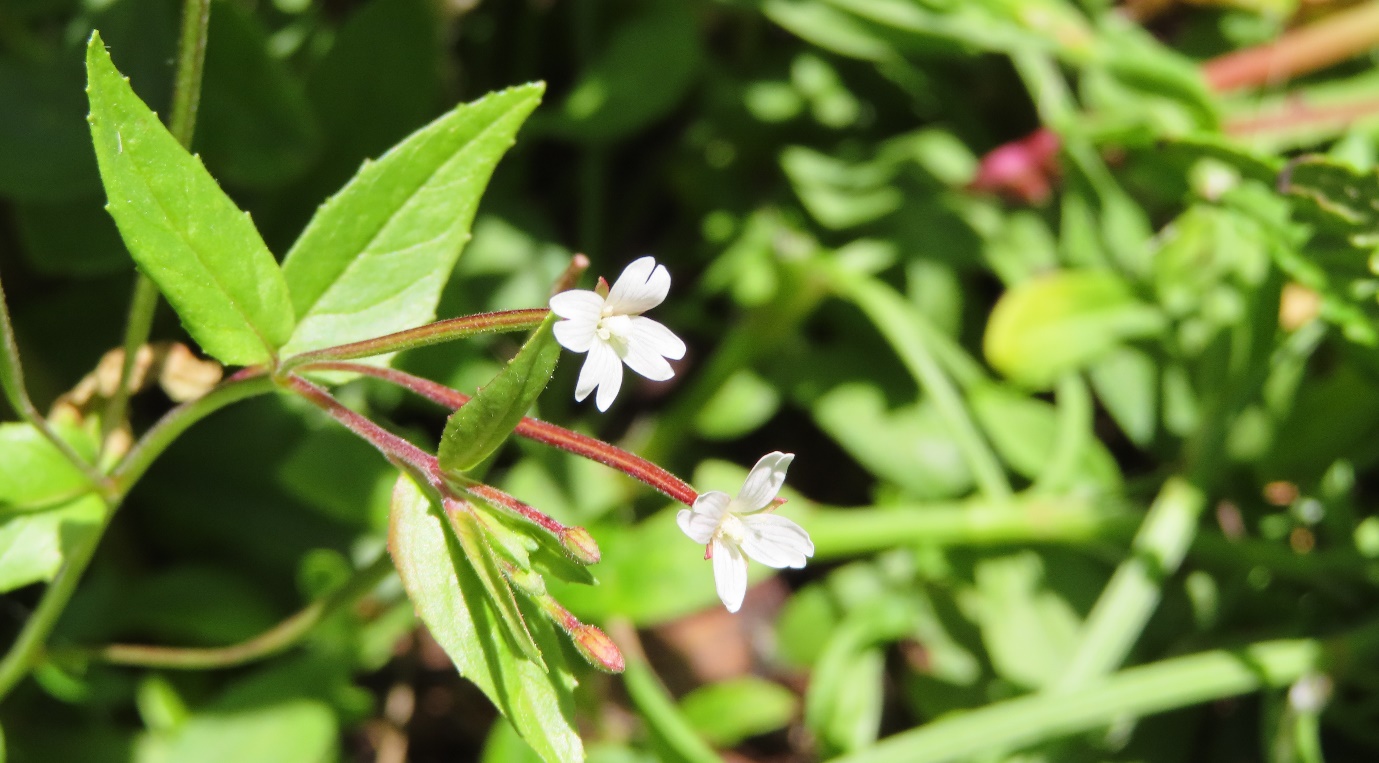 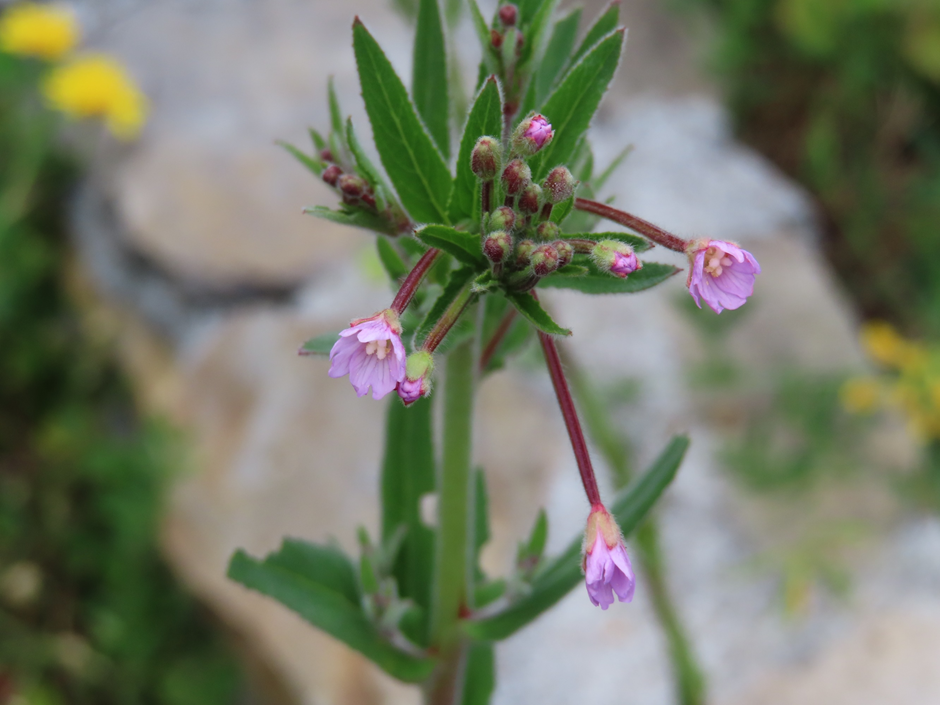 November will be a busy month as I start my bare root planting in earnest. I have decided to take a brief break from the heavy work in the garden as it has been a busy year so far. This will allow me some time to visit my favourite garden centres Covid-19 rules allowing. It will also allow me to focus on the beauty around me as it is too easy to only see the work that needs to be done. It will be interesting to see if I can keep to my commitment to myself for a full month.