Every year around this time I decide that the Inula hookeri has got to go. It spreads very quickly and when it matures it flops over and covers a multitude of other plants in the herbaceous border. Each year I try to contain it by reducing it to a quarter of its size, all to no avail. However, in the last few days it has earned its keep. After a worrying dearth of butterflies the hookeri is suddenly attracting Red Admiral butterflies, Gatekeepers, Small Tortoiseshell, one lone ladybird and a steady stream of bees. This year it is a particularly important source of food as the Buddleja flowers are almost over and probably have little to offer the visitors. 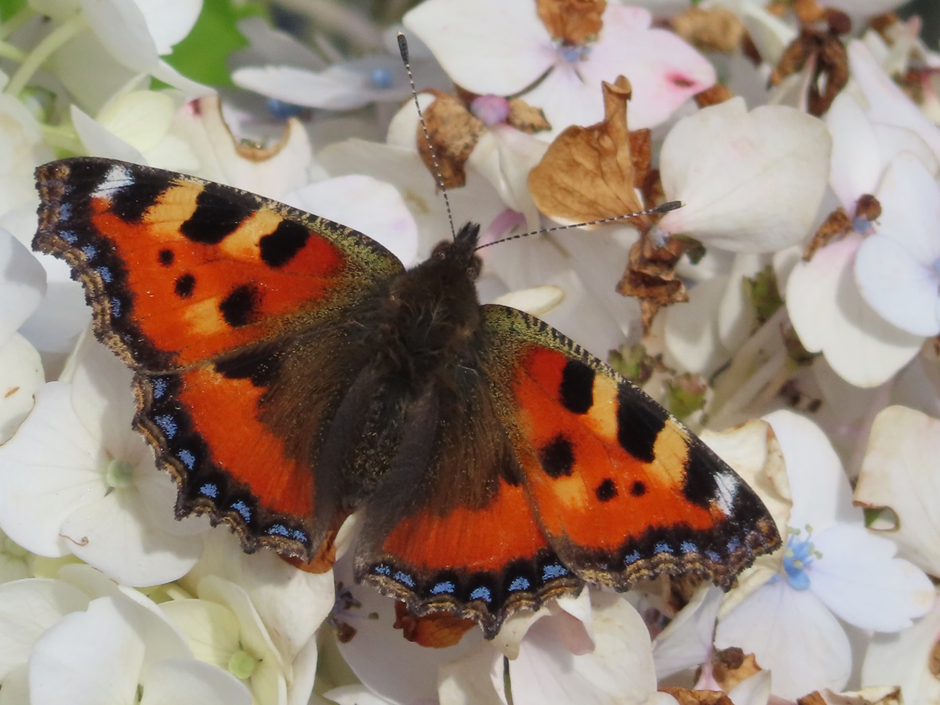 This variety is sterile and can only offer a resting place, but not all hydrangeas are infertile. The paniculata or lacecap hydrangeas are a source of food even if they are not as rich in as plants such as Buddleja and the Inula and many are very beautiful. 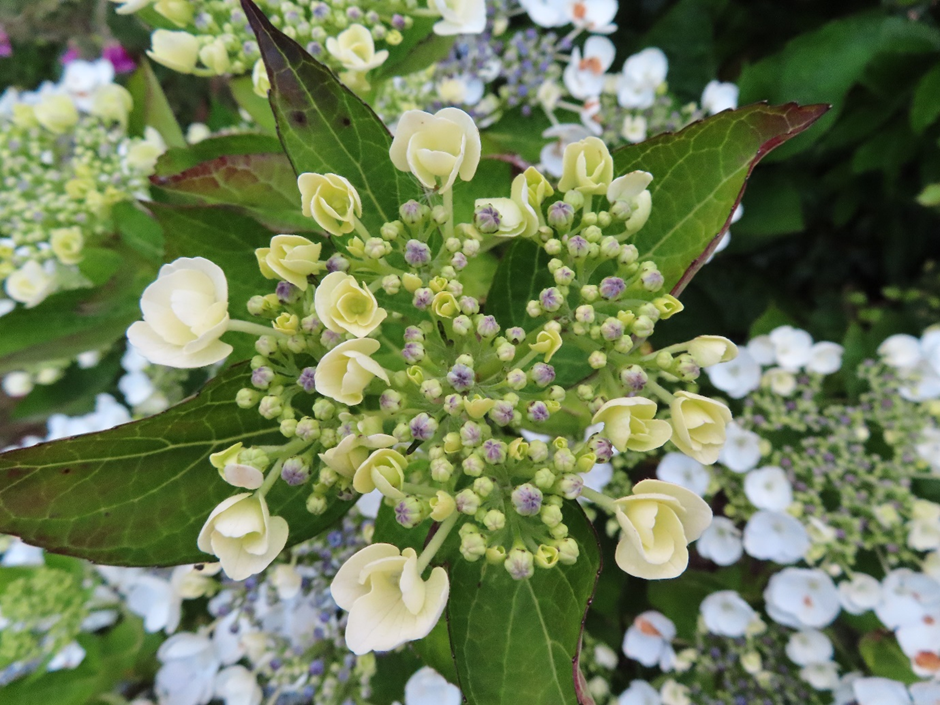 A Lacecap hydrangea just about to open 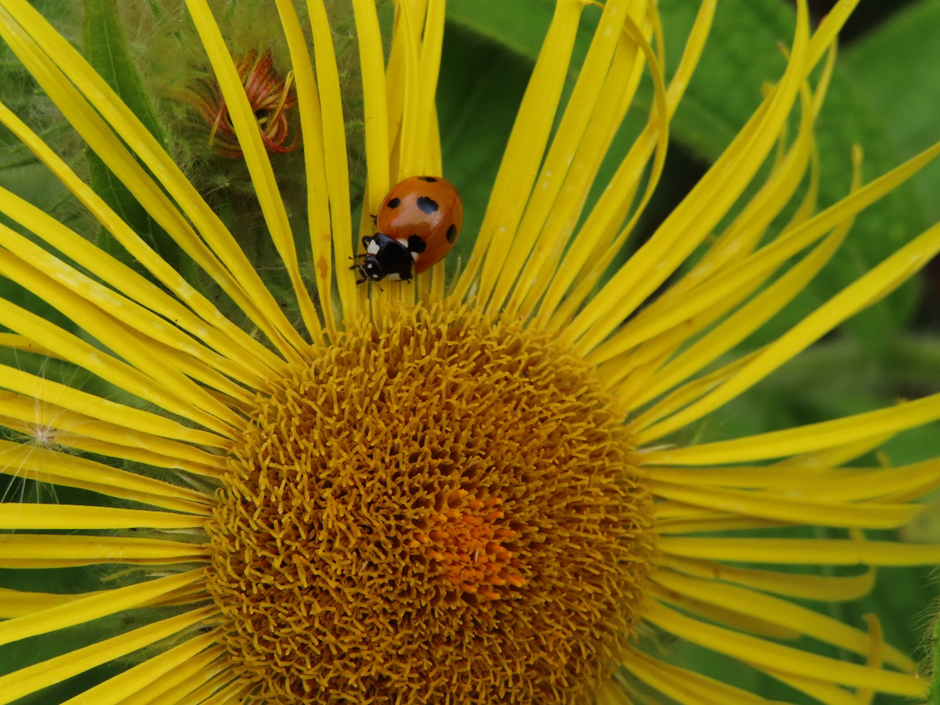 A solitary ladybird now a rare visitor to the garden

The Inula has also been the host to the only two ladybirds that I have seen this year. It is hard to imagine that it is the only one in the garden but if they do exist they are well hidden. 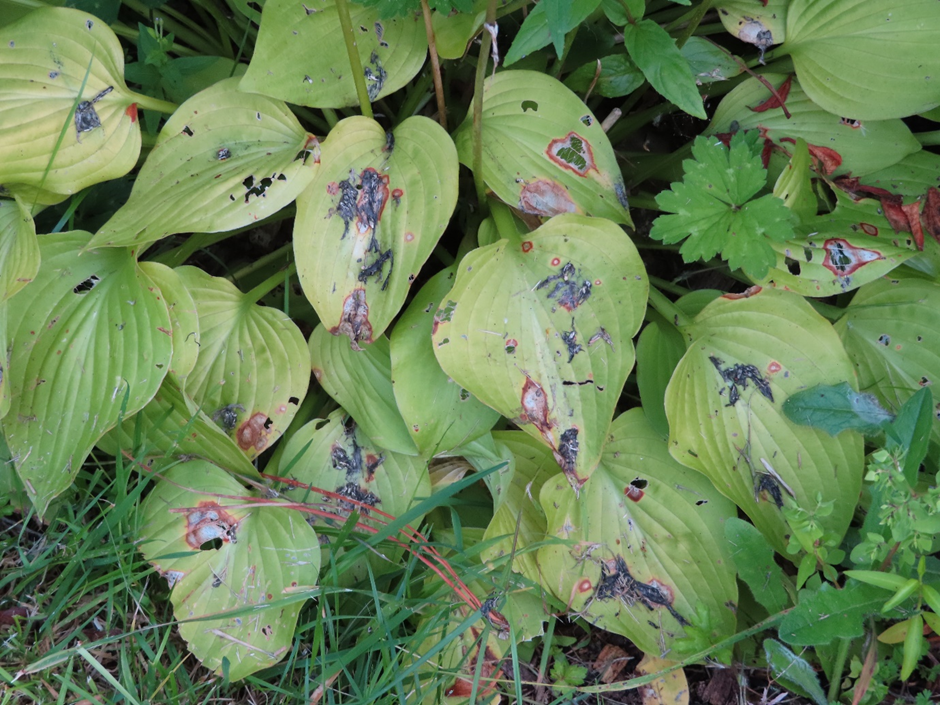 The hosta that I keep in pots by the house are in tatters and look like shredded wheat with the exception of ‘Patriot’ which the slugs have ignored. Ironically those that I have planted in the garden have minimal slug damage. However the above specimen looks as if it has some rare and deadly disease. I have now identified this as ‘Poopera Birdii’. In this case the bird droppings are purple because the aronia berries are just ripening. Naturally the birds got to them before I did. As the berries are high in anti-oxidants it is nice to know that the birds are well fed (they ate all the hosta flowers) and have had a healthy boost to their immune system. Of course I would have liked to get these benefits as well but I will probably have to use the health food shop for my hits. I can’t wait to get my fruit cage installed. 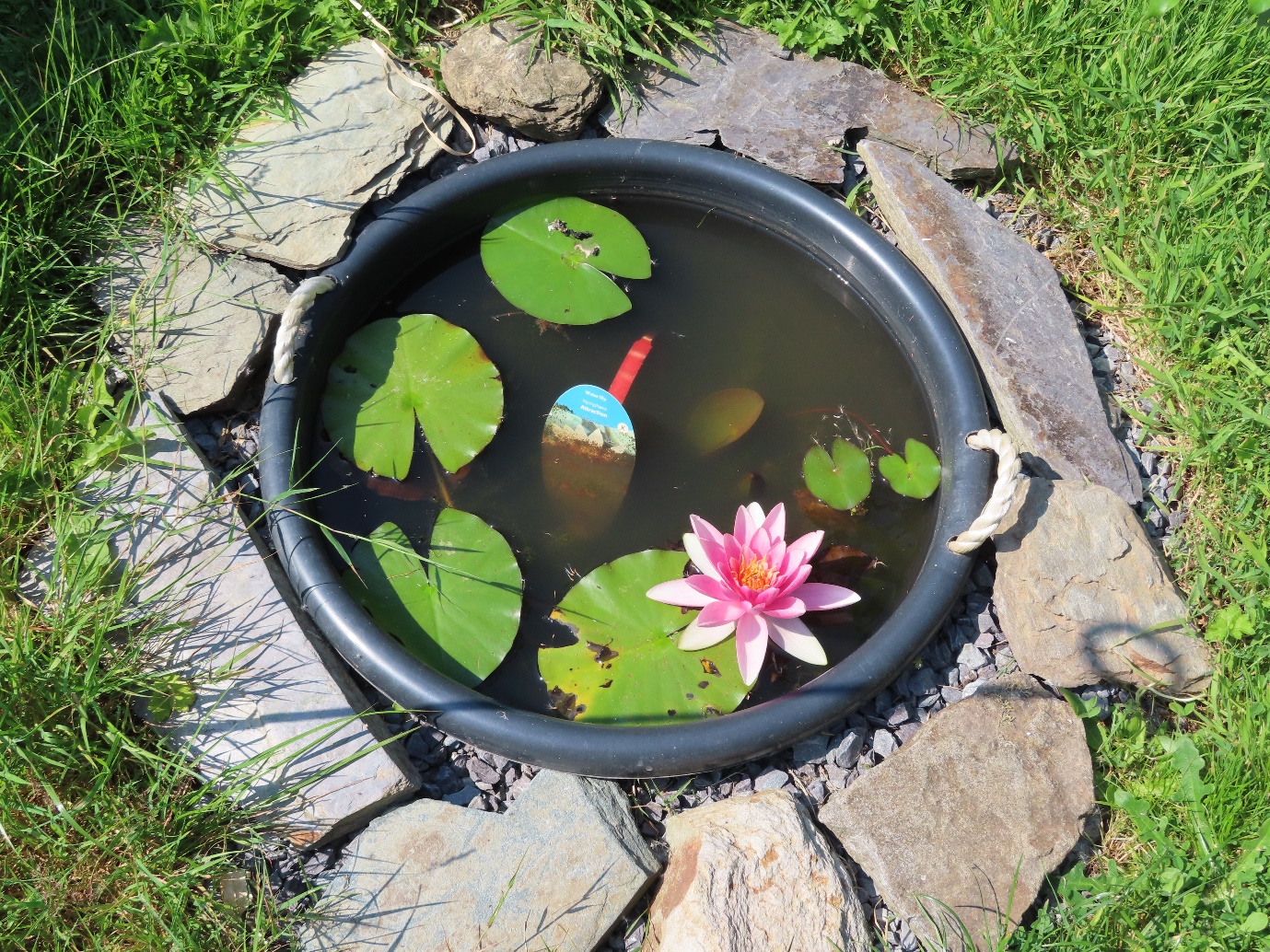 My attempts to create a minature pond last year were thwarted by the very cold spring. The lovely terracotta pot that held the water lily Nymphaea ‘Attraction’ could not deal with the severe frost and it cracked beyond repair. I had the bright idea that if I sunk a heavy duty plastic pot into the ground it would be more robust or at least protect the lily on a temporary basis. To date two dogs have fallen into the ‘pond’ (so much for protection) and they now see it as a handy watering bowl. Despite the abuse the water lily has survived so far and produces blossoms on a regular basis. I would love to have a genuine pond in the garden but this is rather difficult when so much of the garden is sloping or seriously steep. 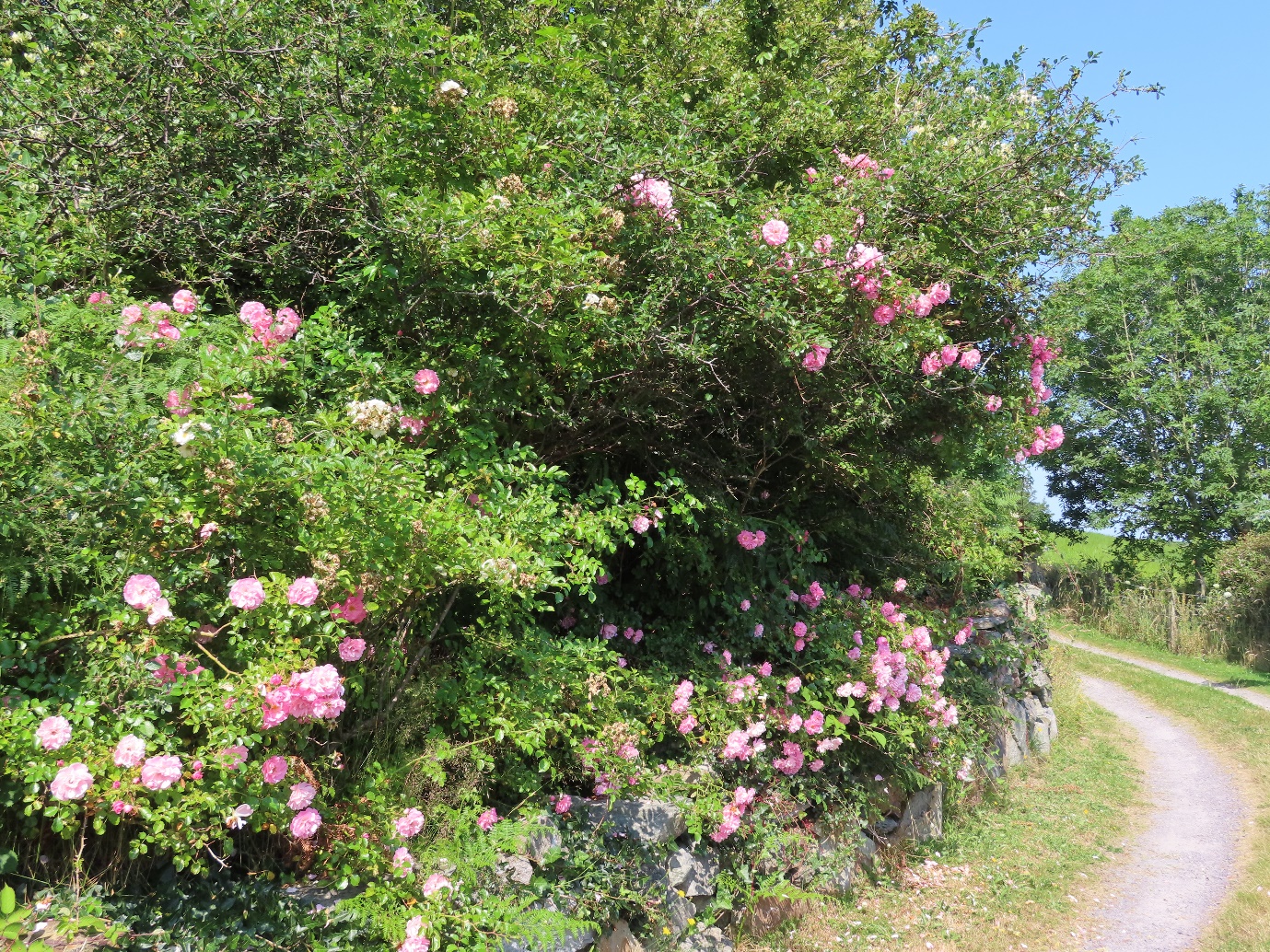 Rambling and climbing roses on the driveway

Rambling and climbing roses do particularly well in this garden and I tend to leave them to their own devices. They now cover the low wall and trees that are at the entrance to the property where they mix with the wild honeysuckle that thrives there. The honeysuckle’s climbing powers are impressive and in this part of the drive it is growing out of the top of a 25 foot high holly tree. 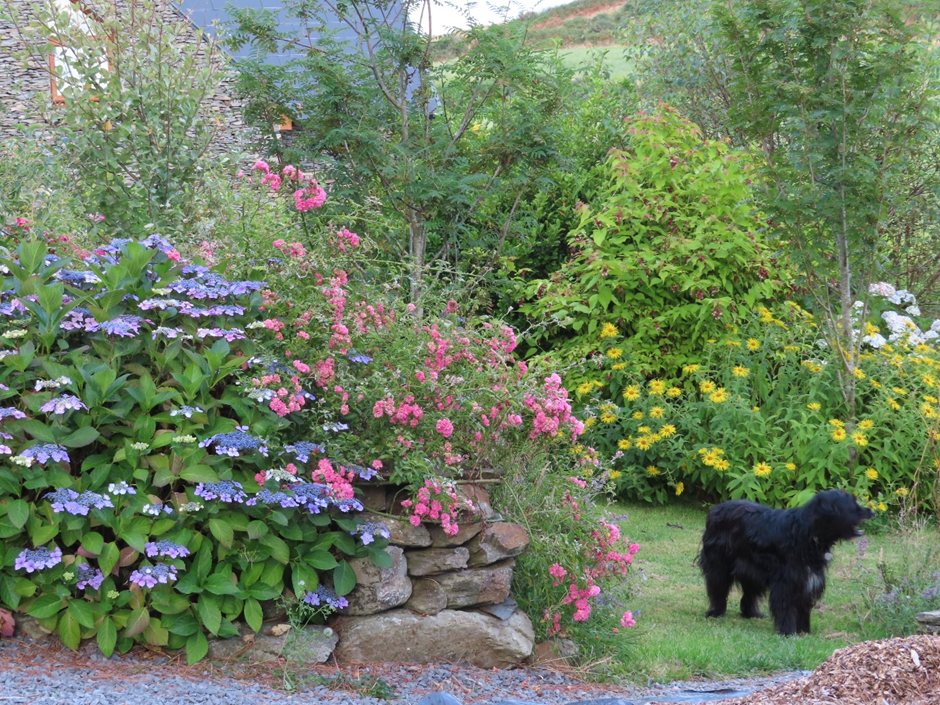 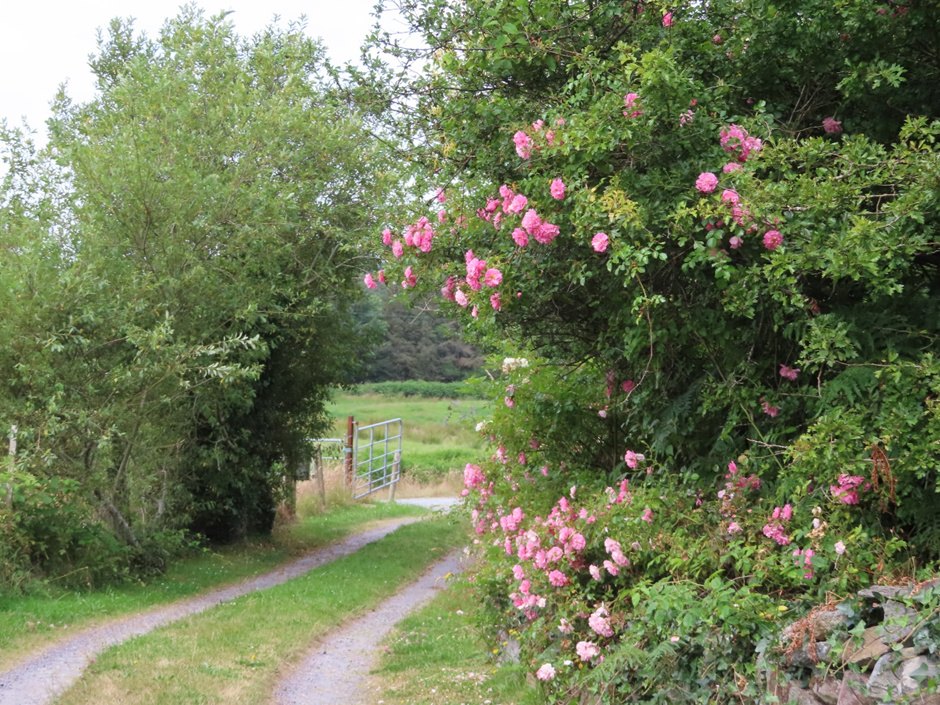 Another view of the roses on the driveway 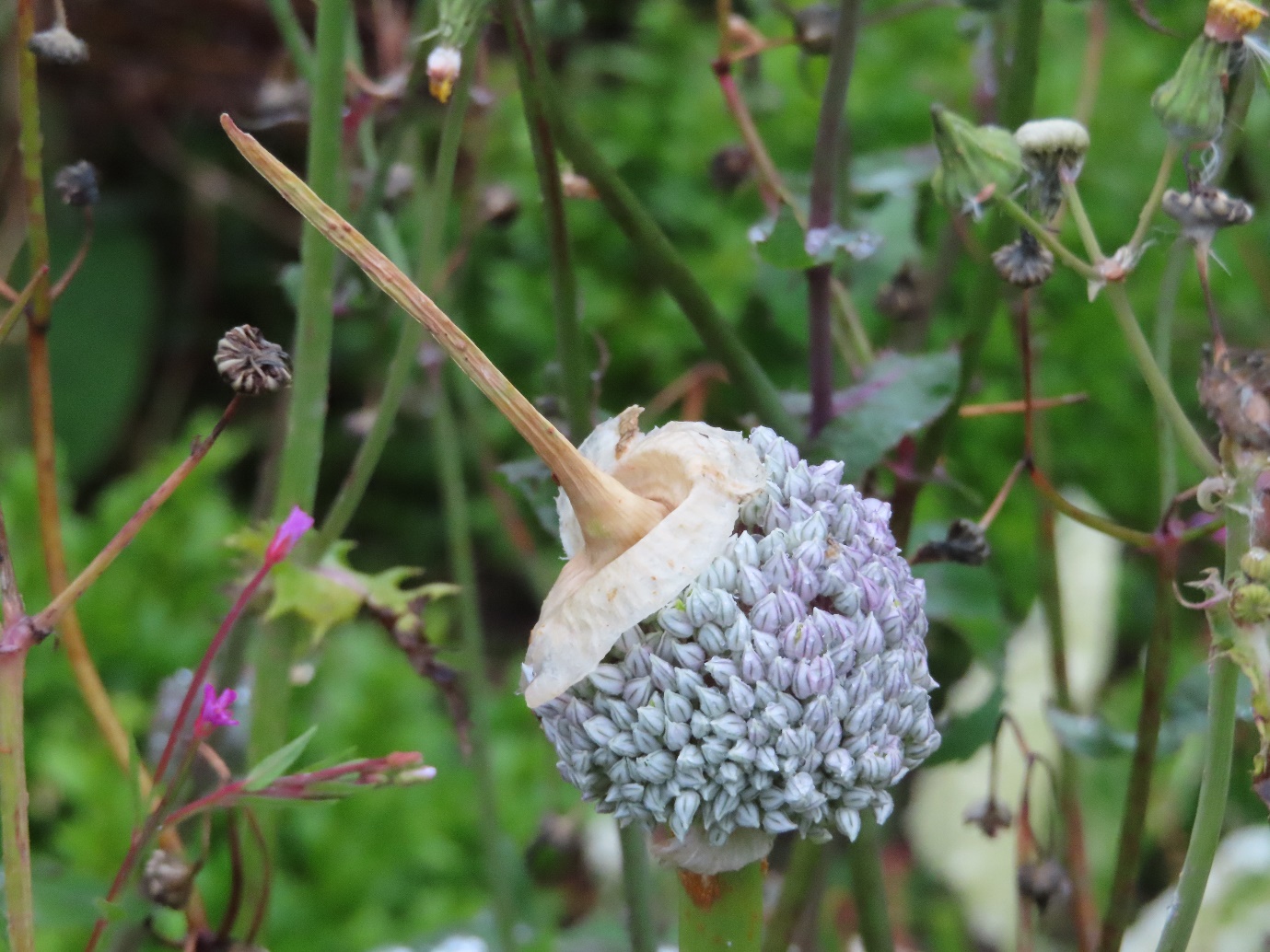 I have decided that the goals of self sufficiency and nature friendly organic gardening are mutually exclusive. My last carrot has disappeared without my ever finding the culprit. My vegetables are eaten by slugs and the fruit that is not eaten by the birds is eaten by the dogs. Rabbits, hares and mice are having a field day with my precious flowering plants and shrubs, and I am banned from two parts of my garden by swarms of wasps. Nature and its creatures are having a great time here but it appears to be at the expense of my self sufficiency dream. I am very lucky that there are so many organic growers in the area or I would starve.

There are some positive notes. I have set out my onions for drying and am pleased with the results. The Russian Kale is doing very well and to date has not been eaten by anything. Millie and I are competing for the potatoes as she made short work of the fence that I put up to protect them but I have had a few meals. I had a large crop of leeks and allowed some from last season to go to seed. I was curious to see if they would attract any wildlife. As you can see below the bumble bees love them and so the experiment was well worth it. I wonder whether it will flavour their honey and can imagine the surprise of the person who gets to try some that is leek flavoured. 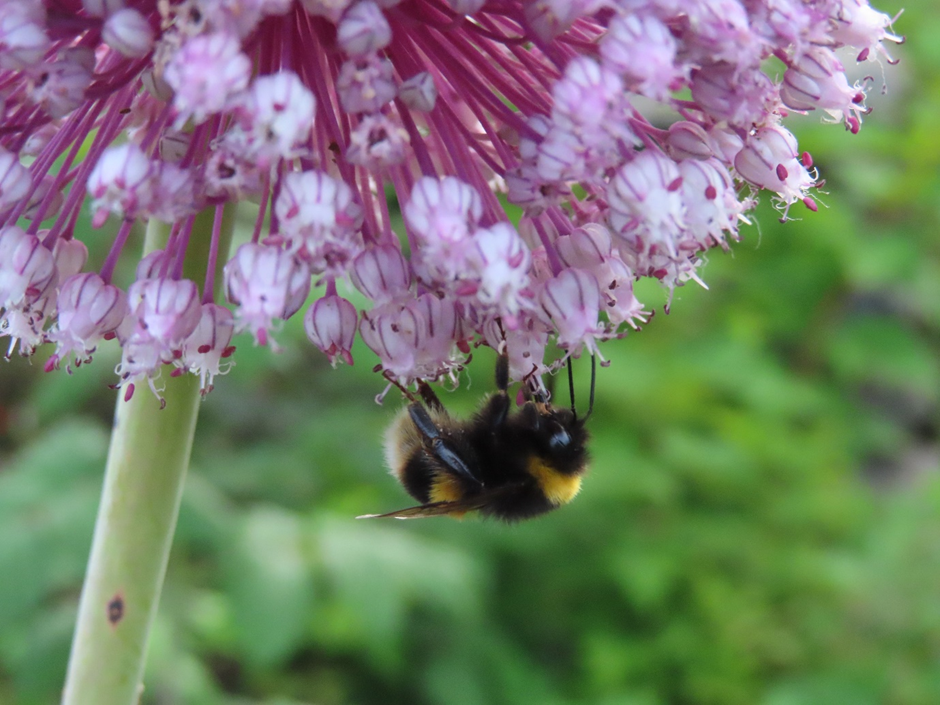 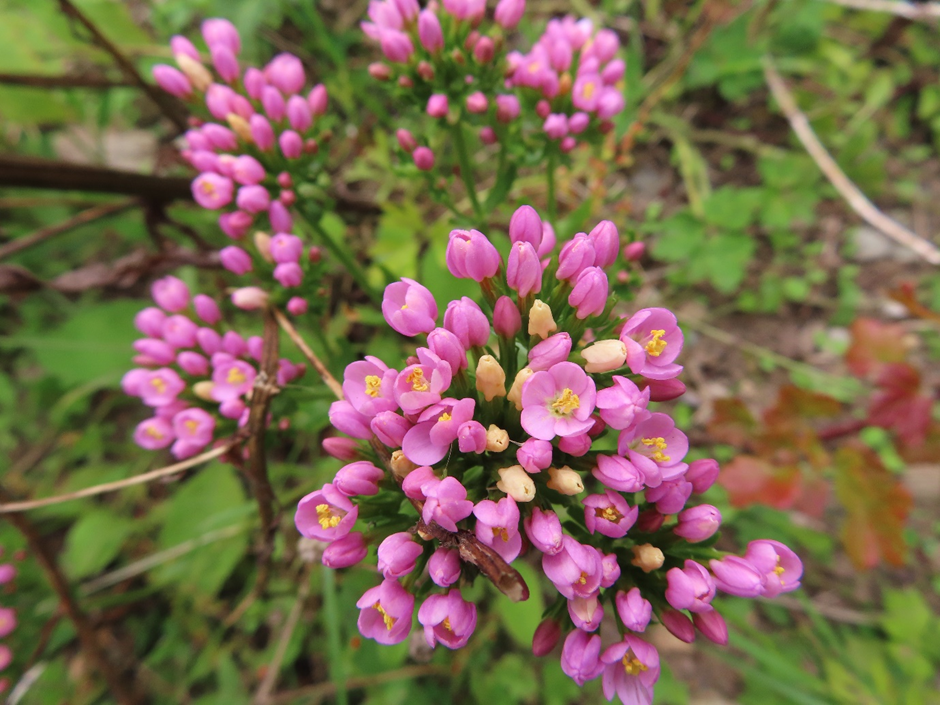 This lovely wildflower Common centaury is number 74 in my catalogue of wildflowers that I have identified in the garden this year. This is a member of the Gentian family and has been used to ease digestion. It never fails to amaze me that ten years ago this ‘garden’ was an open field grazed by cattle. It is to the credit of previous owners that the area was not ‘pesticised’ to death and that all of these wild flowers were just waiting for the opportunity to start growing again. The centaury may be an exception as it first appeared last year and I have not seen any in the surrounding area. Apparently, it is common on Cape Clear and I like to think that the seeds may have been dropped by a visiting bird. 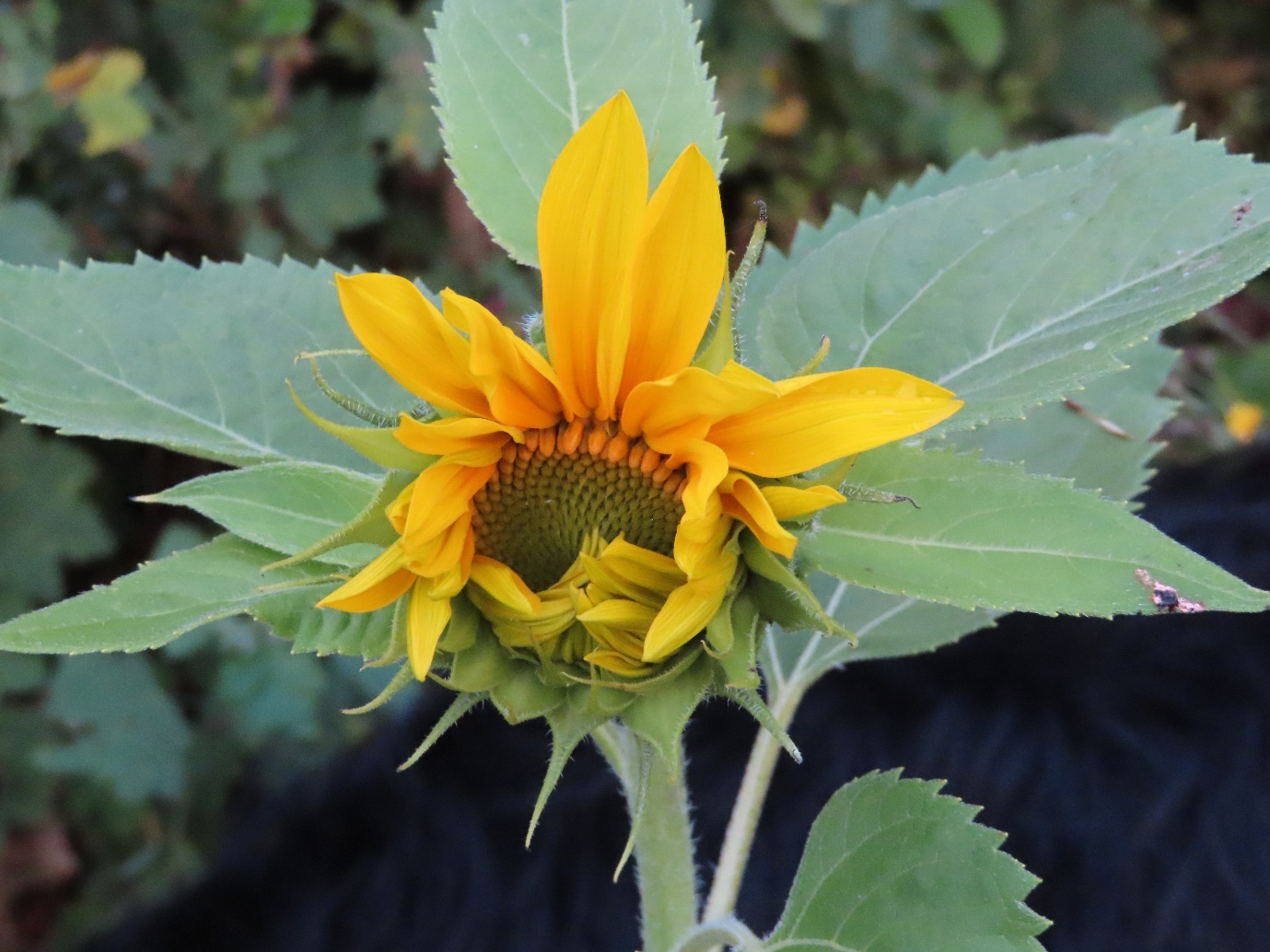 This Sunflower is another visitor to the garden. This is the second year that I have had just one plant which is growing in a completely different part of the garden to its predecessor. 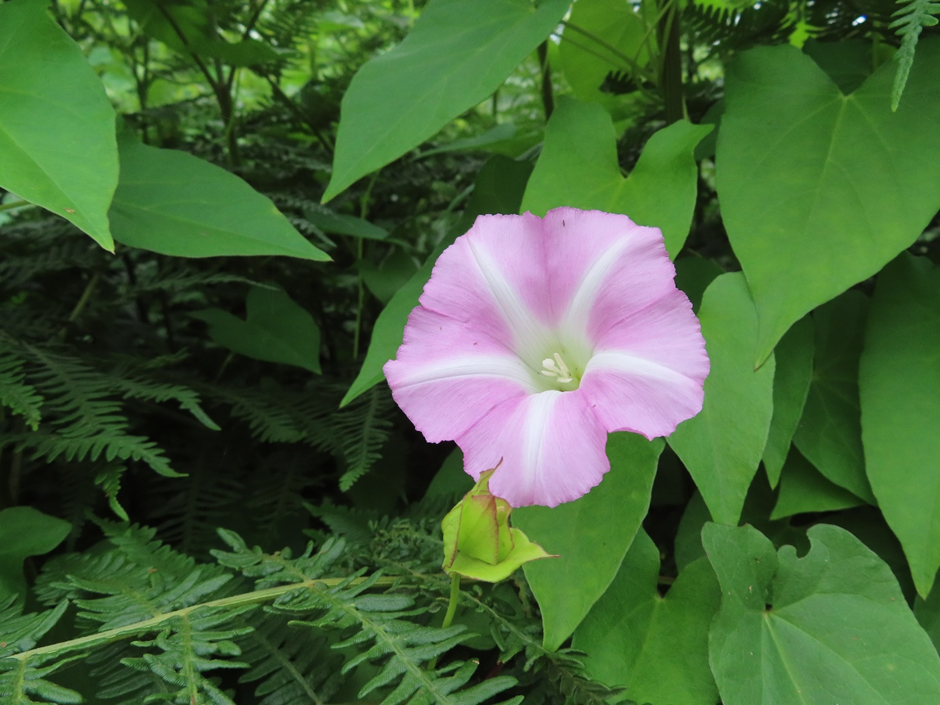 This sea bindweed is another very attractive wild flower but I am less happy about its presence. It is as invasive as its relative the common bindweed and I spend hours crawling through the shrubberies trying to pull out every root to prevent their spread. The result has not been successful. John Akeroyd in his Encyclopedia of Wild Flowers describes it as ‘delightful’ so I guess he has never had to try and remove any from his garden. 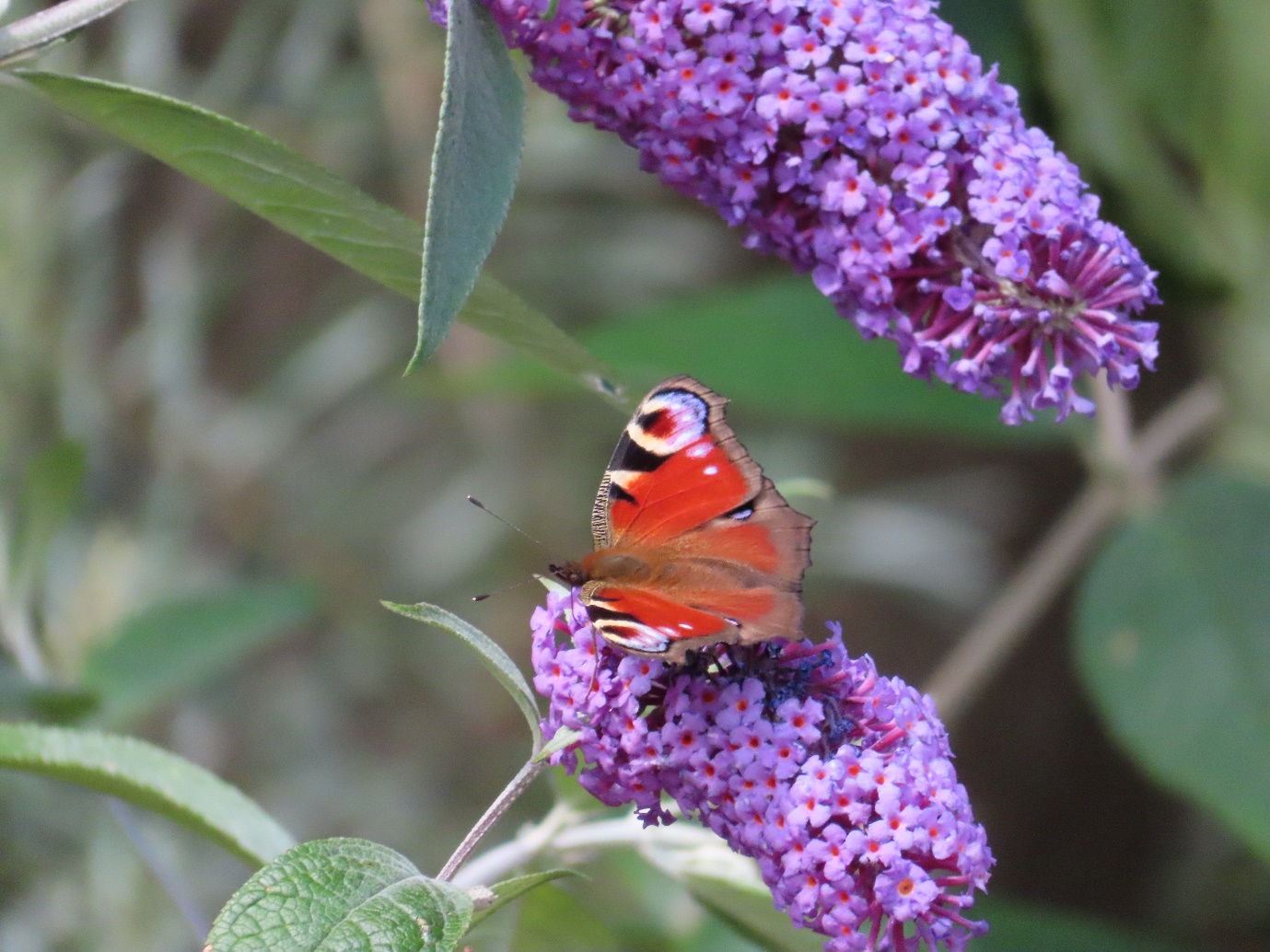 I was becoming very worried about the absence of Peacock butterflies so it was a ‘delight’ to see them in the garden for the first time today. Summer would not have been the same without them. Unlike the other creatures in the garden, they only seem to give. I am taking their return as a positive sign and hope to see many more.

One reply on “Garden Visitors”

Beautiful-I am transported to your garden. Maybe next year.