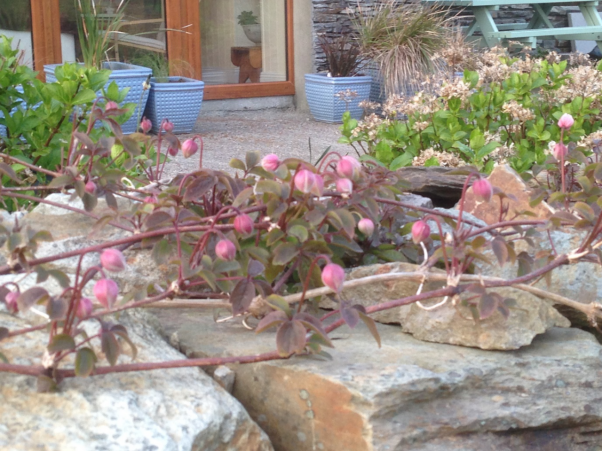 I have always had a fondness for clematis especially as it flowers so early in the year, but never had a hope of growing one upright in my exposed garden. However, I thought myself very clever when I hit on the plan to use the tops of all the dry-stone walls around the house as support. The first pink clematis Montana quickly grew to twenty feet and was soon covered in flowers. I was so delighted that I planted three more in quick succession, including a white one. The next year the show of buds was as impressive as ever, so imagine my shock when I came out one morning to find the plants stripped bare. For the last year they have all appeared to be dead unless you examined them closely. Then you could see tiny leaves or buds appearing for nanoseconds. Occasionally, a bud or flower lasted for a few days but these were usually growing away from the wall and also disappeared in time. 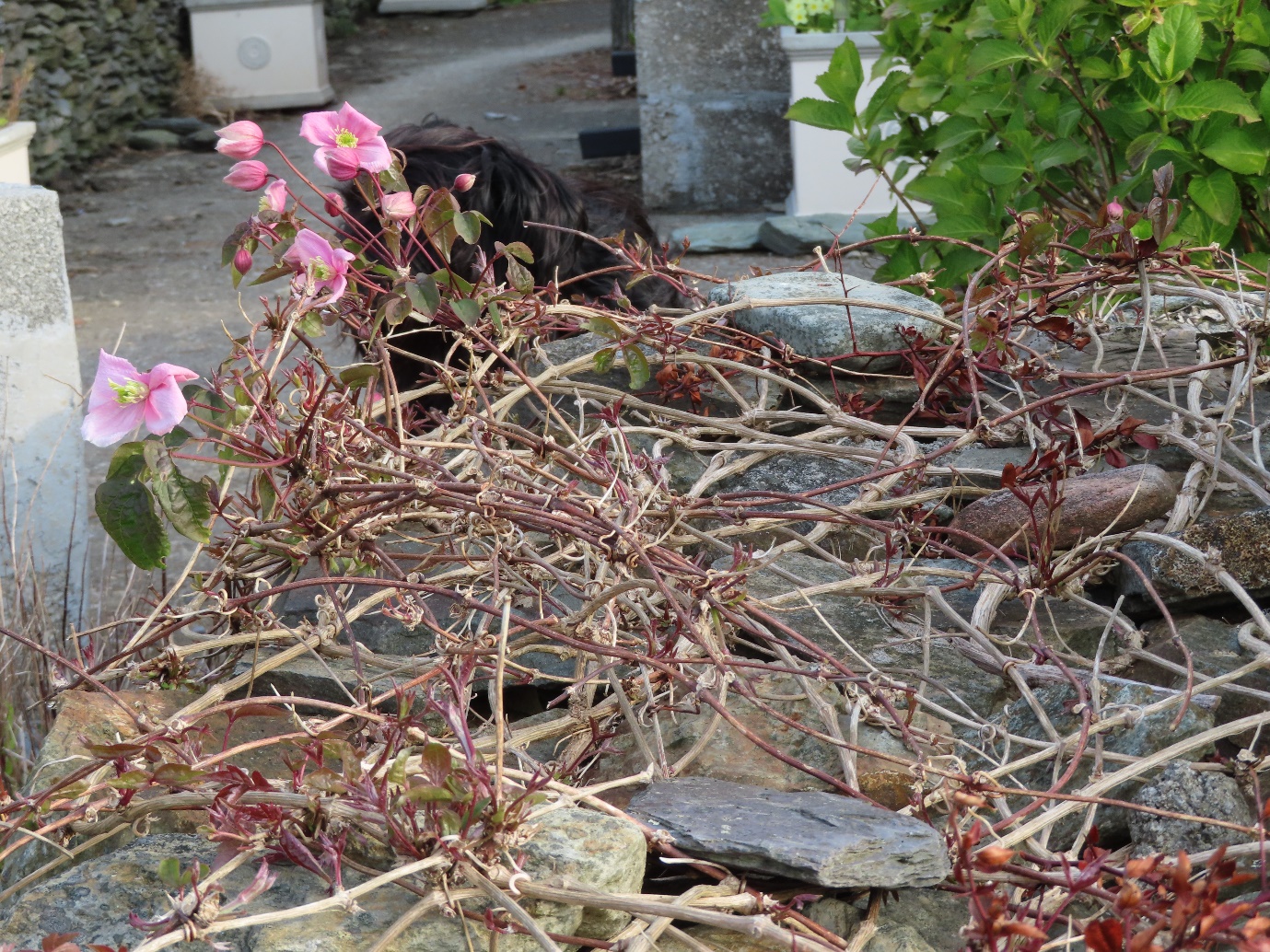 I have been completely baffled by the problem. I rejected the idea of mice as they would have had to have been gluttons, and present by the dozen, to decimate a twenty-foot plant in one night. Hares and rabbits were also a possibility, but left no evidence at all. I even wondered if the plants had a disease, but this year some tendrils have made it to the bordering hydrangea and pyracantha which are now covered in healthy flowers. I had given up trying to solve the problem when last week I saw a rather large creature out of the corner of my eye in close proximity to the wall. In general, my philosophy is live and let live but I am not happy at the presence of rats so close to the house. With regret I set a rat trap nearby. Sadly, all that I caught were three large mice. Within a week the clematis have made a full recovery. I can only guess that these ‘super mice’ have been responsible for their destruction and have dined regally on clematis plants for two years. This may even explain their larger than usual size. As their accommodation in the dry-stone wall is luxurious, I have no confidence that their home will remain empty for long.

Slugs, snails and other thieves 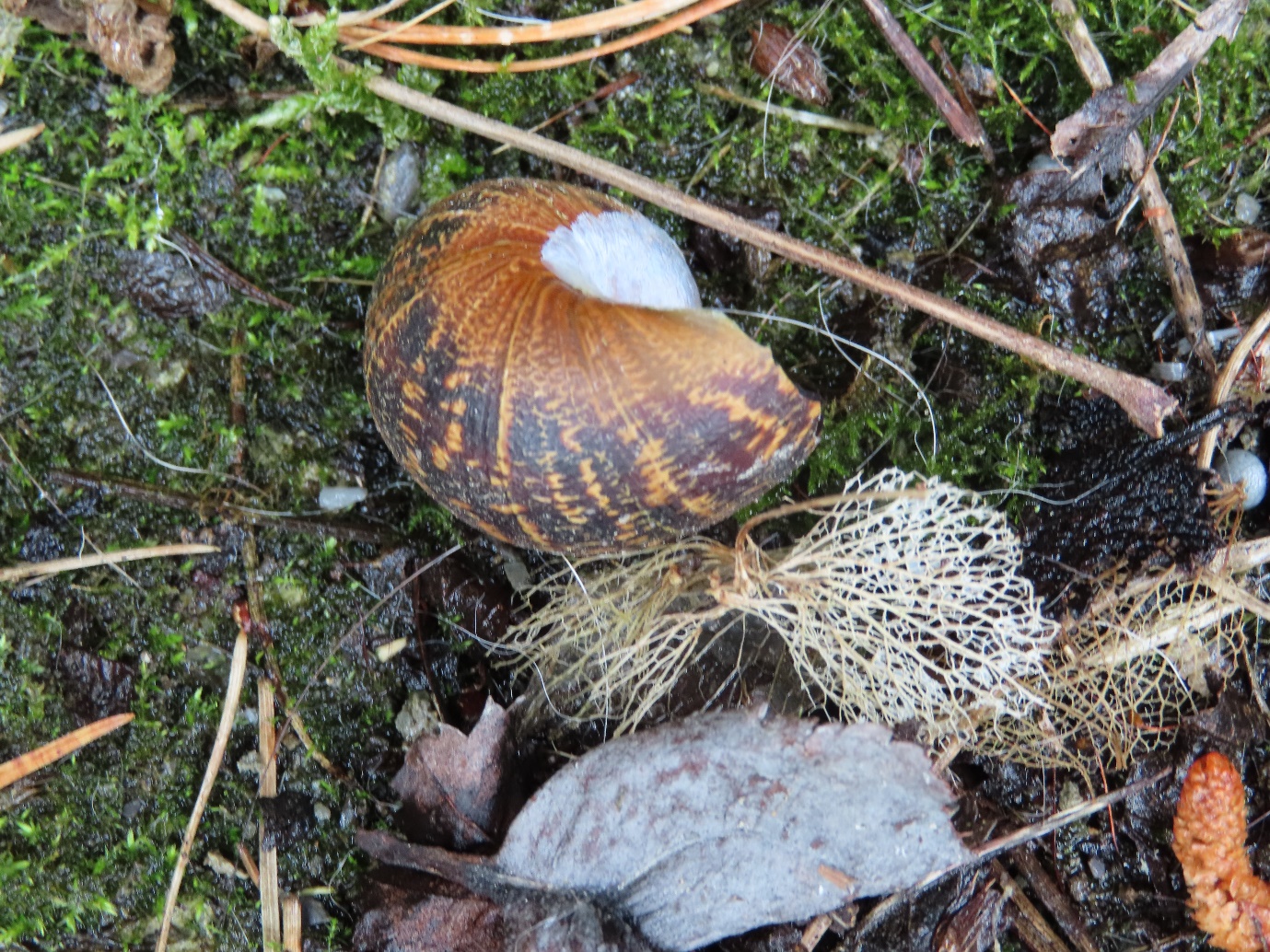 I have great respect for the tenacity and resilience of the slugs and snails in my garden. They travel for miles over rough concrete and gravel to reach the Hosta placed at the back door and, like the mice, have prodigious appetites. For some reason they have largely ignored the Hosta placed in shrubberies throughout the garden although these are very easy to reach. I have tried placing the pots in water where possible, but the slugs seem to have learned to swim. I have sprayed them with non-toxic, organic deterrents which have had some effect but are not long lasting. I have also individually removed the slugs and snails and placed them as far from the pots as possible – to no avail. Either they, or their relatives, are back in a flash. Notice the tiny creature making its way up the planter in the photo below and you will see what I mean by their tenacity. 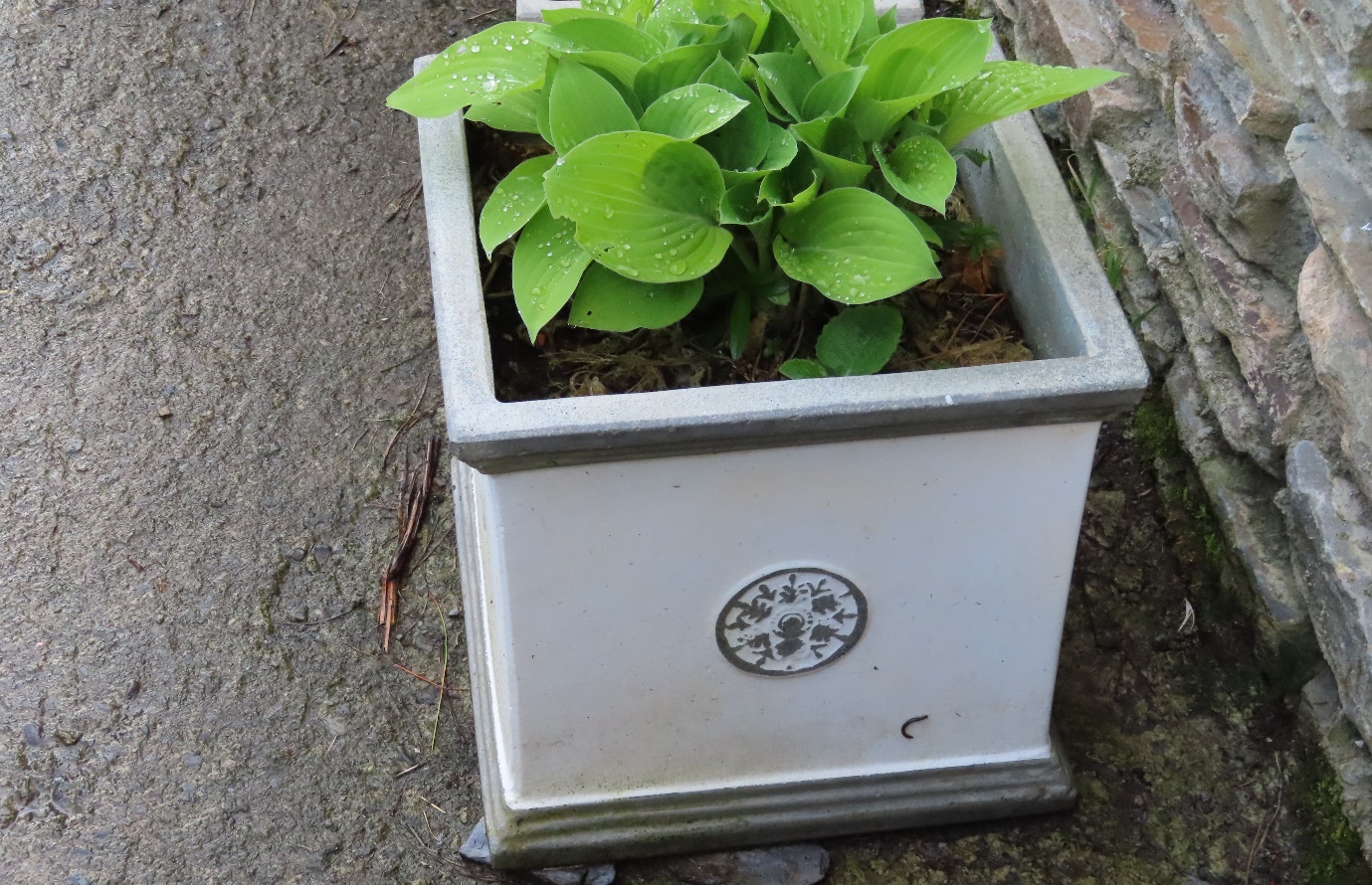 I have been complaining in the past about the attacks on my vegetables and have mentioned my potato-loving dog. It is a little too early for her to start digging them up but I will have to fence the area soon, as she usually realises that they are ready for eating before I do. Because of the destruction of my broccoli and kale I recently surrounded newly planted Russian kale and broccoli plugs with a double fence of chicken wire to deter the hares/rabbits. I was dismayed to discovered that it took just a day for something to start some serious digging. Surprisingly, the plants were dead as they had been dislodged from their holes but not eaten. For the first time ever, I have actually caught the culprit in action. Sadie, my sweet natured collie with her dainty paws, has been mining for the chicken pellet soil improvers that I use to increase the worms in the soil. She is a very obedient dog and desisted as soon as I caught her in the act, but as she is as tenacious as the slugs and the mice she will return to the job at hand as soon as I turn my back. Some serious fencing is in order before I purchase more plugs. I would imagine that people will recommend that I use seaweed as a soil improver as there is so much close by. I usually do collect some after the storms wash it up on the beach but have learned that all three dogs are serious seaweed guzzlers so I tend to be careful where I place it. I will also start my nettle tub to create a liquid fertiliser although they will probably like this concoction too. 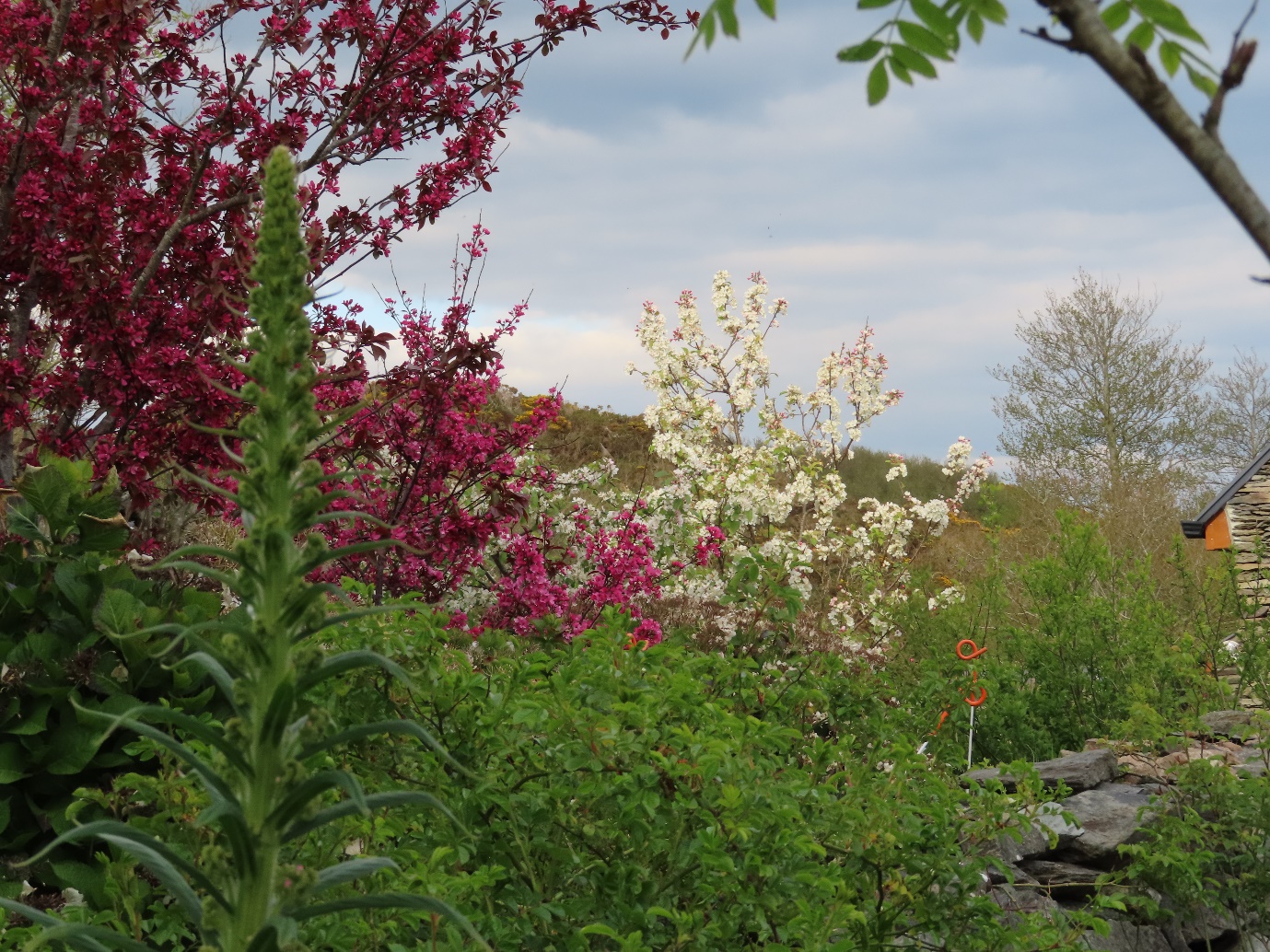 Despite the cold easterly winds, the sunny weather has encouraged the bees to start feeding in the garden. The crab apple blossoms are particularly popular at the moment although the berberis still have some nectar left. I know that I have a good variety of bees and bumble bees and have tried to research the topic, so that I can identify each one and submit the results to the national biodiversity Data Centre. It has proved to be a frustrating experience. First the bees never stay in one place for more than a second and I am not a good enough photographer to produce anything more than a fuzzy image. I also read that you often need to see the bees rear end to make a positive identification. My bees are as prim as any Victorian and keep their bottoms tucked under their body very tightly. The next piece of advice is to capture them in a jar for closer observation. This I have actually managed to do. Sadly, the bees are no more forthcoming with their nether regions than when they are on a blossom. My attempts to view them in full end up stressing us both and I feel guilty about trapping them in the first place. For the moment I am just taking pleasure in the fact that I seem to have a wide variety of bees and bumble bees and my planting to provide them with food has been successful. 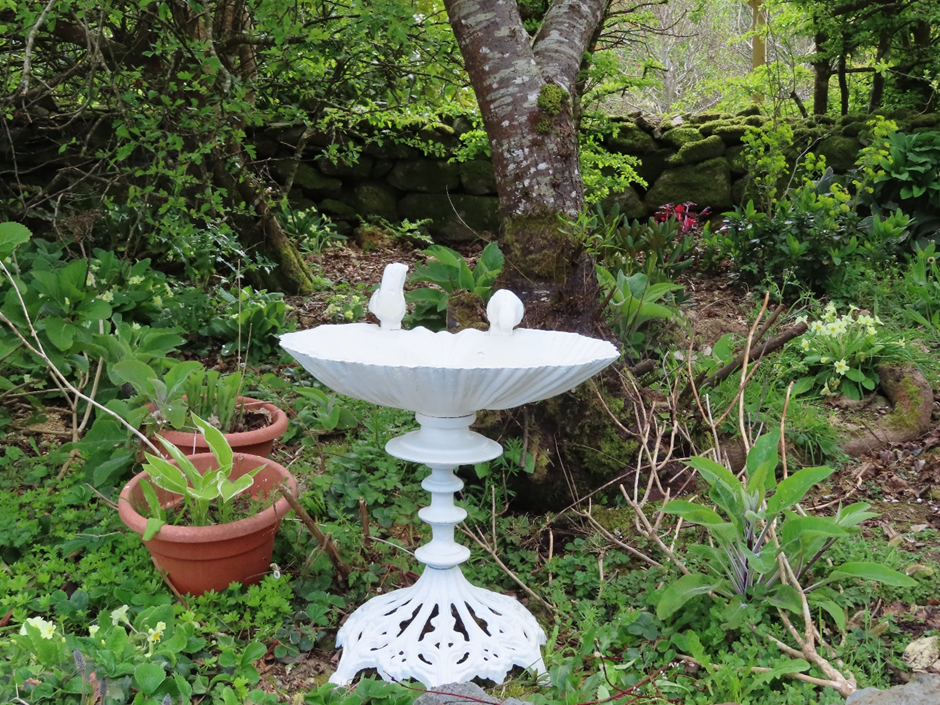 My sixteen hundred litres of water in the collection tubs are almost gone and I am delighted to see that the ground is slightly wet. After a winter of storms, it may be hard to believe but the ground is very dry and we badly need rain. The strong winds here have a searing effect on any area of land that has not got a good layer of mulch and cardboard and it dries in days. The salt is also very tough on any material that is exposed to it. The pump in the picture is not functional but gives you a good idea of the effects of the weather on metal here. I had it sanded and then painted with the recommended materials over and over again in 2019. As you can see one and a half years later It is already showing signs of rust. As I may not have been sufficiently experienced in my application, I have asked a professional to restore the birdbath above which was completely orange with rust. It remains to be seen how long it will continue to look so good. 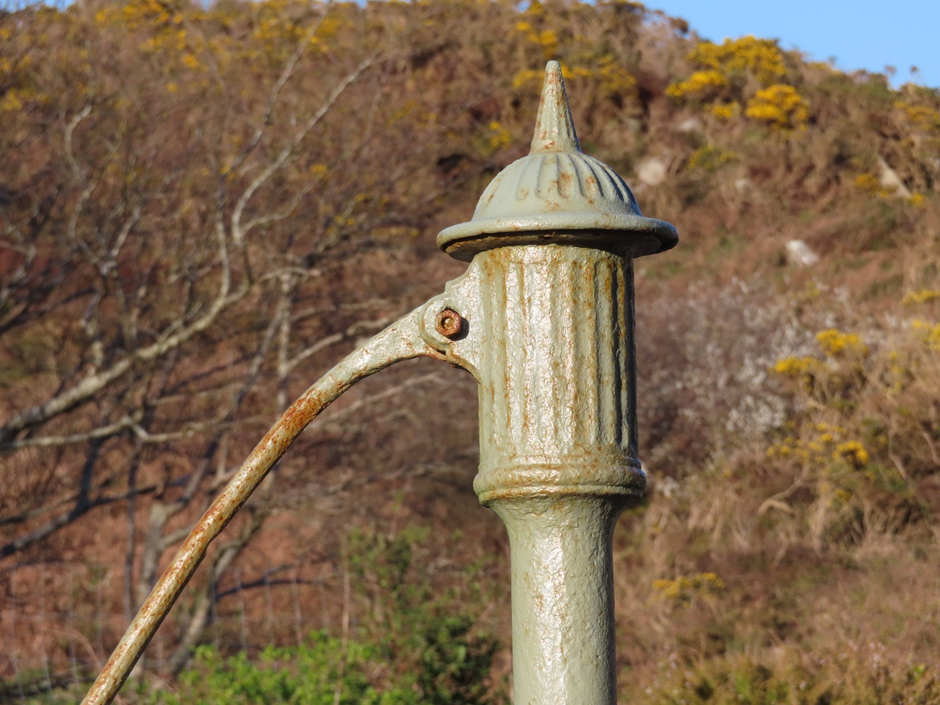 Two blackbirds have been sauntering around the patio as I write this and I hope they are not nesting in the hydrangea just outside the window. Whilst my dogs like most vegetables they are also carnivores and I will have to keep a sharp eye on the nest to keep the birds safe. 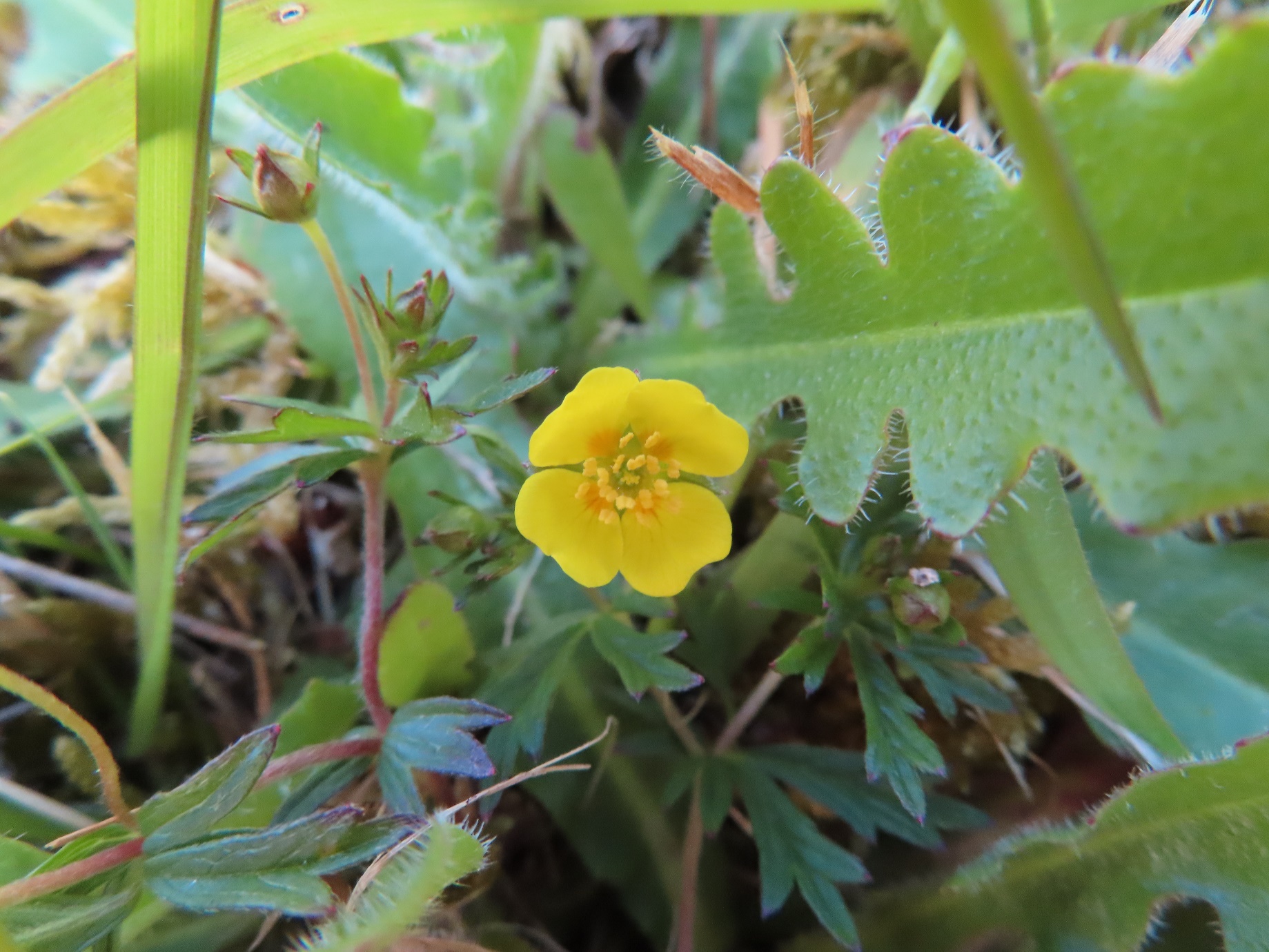 This year I have decided to keep a detailed account of the wildflowers in the garden. To date I have 31 varieties in flower. Some are so tiny that you have to kneel down to see them but my technique of only weeding grass and clearing around the base of shrubs seems to be working. Each and every one is been visited by bees or insects so all are earning their keep.

I think that this is thyme-leaved speedwell. It is so tiny it is easy to miss 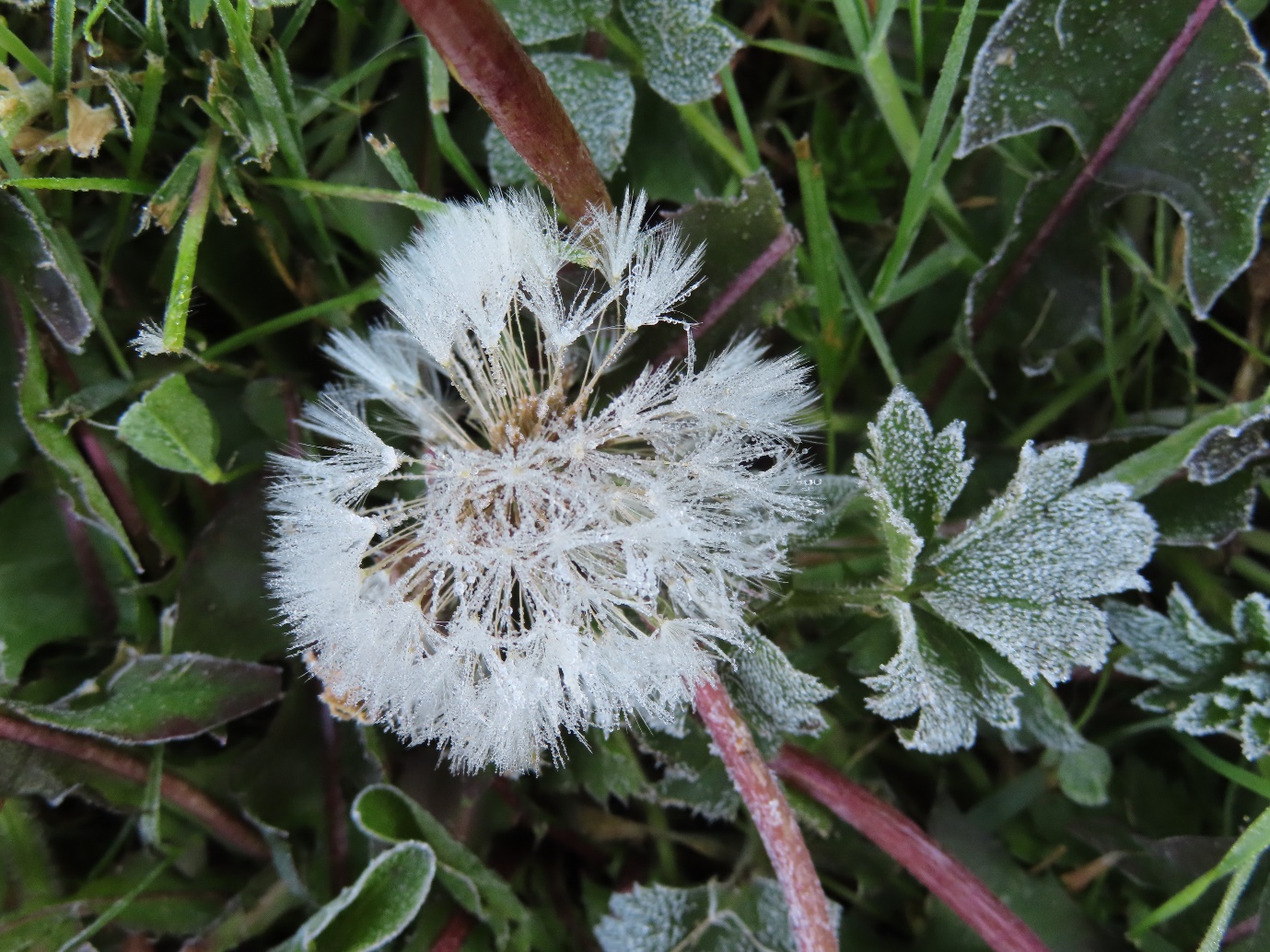 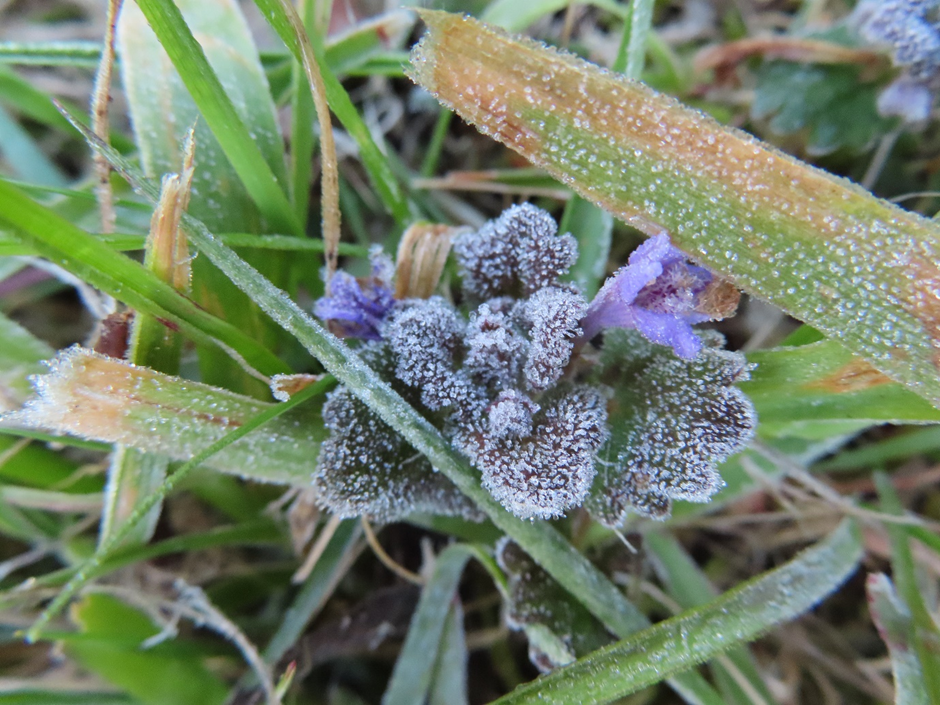 I have just been checking the garden in preparation for the approaching storm. This is the second in two weeks. It has been unusually cold for the time of the year and a week of hard frosty weather has seriously tested the plants in the garden. Two years ago, I bought some small echium plants as I love their graceful spikes, as do the bees. Given the lack of shelter I was really asking a lot of them and after two winters of storms it is amazing that they have survived at all. Some are rather battered and have grown into odd shapes. The recent frosts have also burnt them. But all are flowering profusely even the one lying on the ground. The bees are not put out by its prone position and are feeding greedily before the storm. Sadly, I don’t think any of them will survive the latest battering. I am hoping that some will seed themselves around the garden and I am already looking for more suitable places to plant their successors. 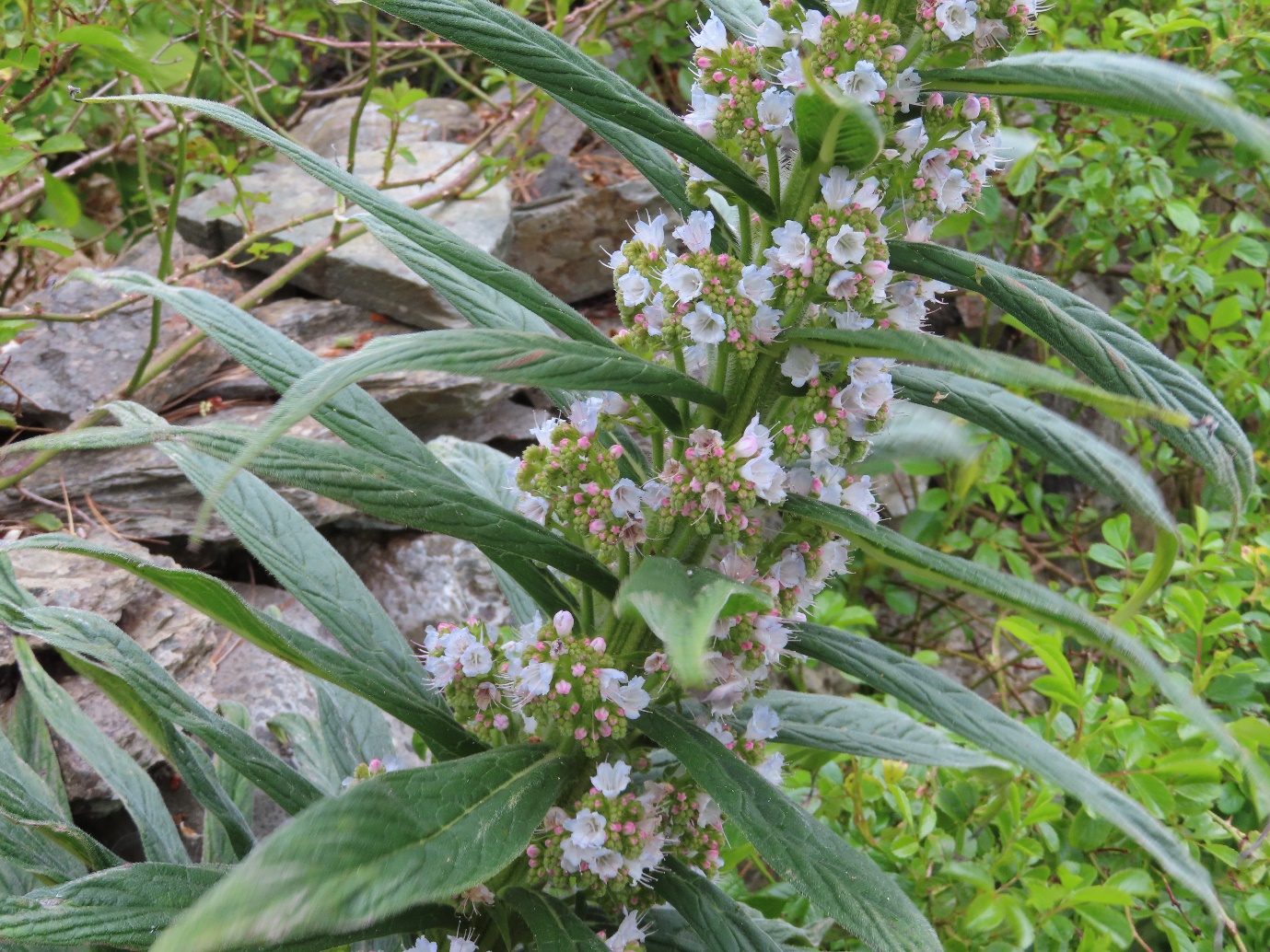