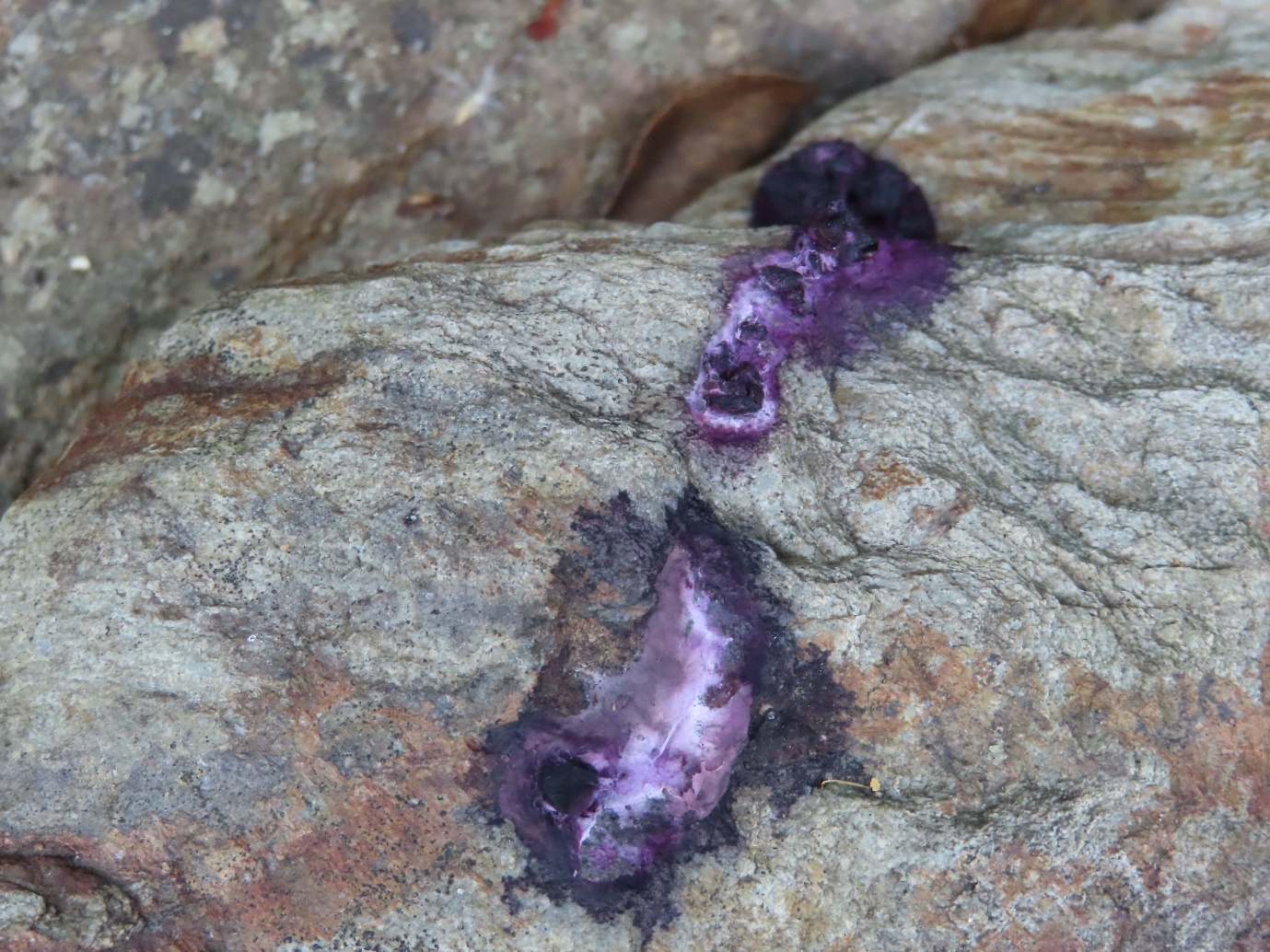 Artists at work on my stone walls

I have decided that I have to change my attitude to the pilfering of all of my fruit, as dwelling on it is bad for my blood pressure. It just requires a slight change in my perception from birds as thieves to birds as artists who use my fruit as their palette and suddenly everything seems different. The ‘Painting’ above has been influenced by the ‘Aronia Berry movement’ hence the lovely purple hue. Now that I have become aware of this art form, I may be able to have an exhibition next year. 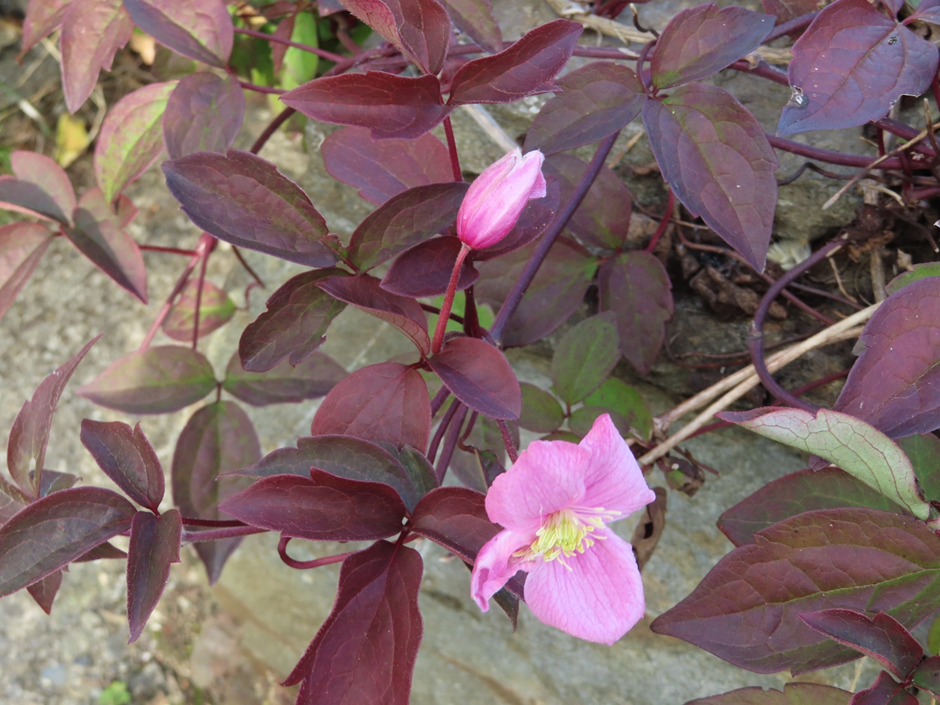 Sadly, I have not been able to take the same approach to mice. After two years of devastation my four Clematis sprung into life this summer once, (with regret), I disposed of the three mice living in the walls around the house. The plants have grown so prolifically that I was just about to recommend using trained mice for pruning. I have even had an autumn showing of flowers to make up for the bare branches in spring. Today the dogs are fascinated by activity in the nearest stone wall and I have noticed that the new shoots and unexpected buds are being removed with a surgeon’s precision. This can only mean that a new family has moved in to feast on my poor clematis. And so, the cycle begins again.

In spite of all of my concerns, the butterflies have been enjoying a revival in the garden and making good use of the few buddleia plants that still have some flowers. There has been an abundance of Red Admiral, Peacock, Small Tortoiseshell, gatekeeper and speckled Wood butterflies. There have even been two Painted lady butterflies travelling all the way from North Africa. All could be found sunning themselves all over the garden and even on the driveway. Sadly, I have not found any more cinnabar moth caterpillars although they usually can be found in the Ragwort by their thousands. 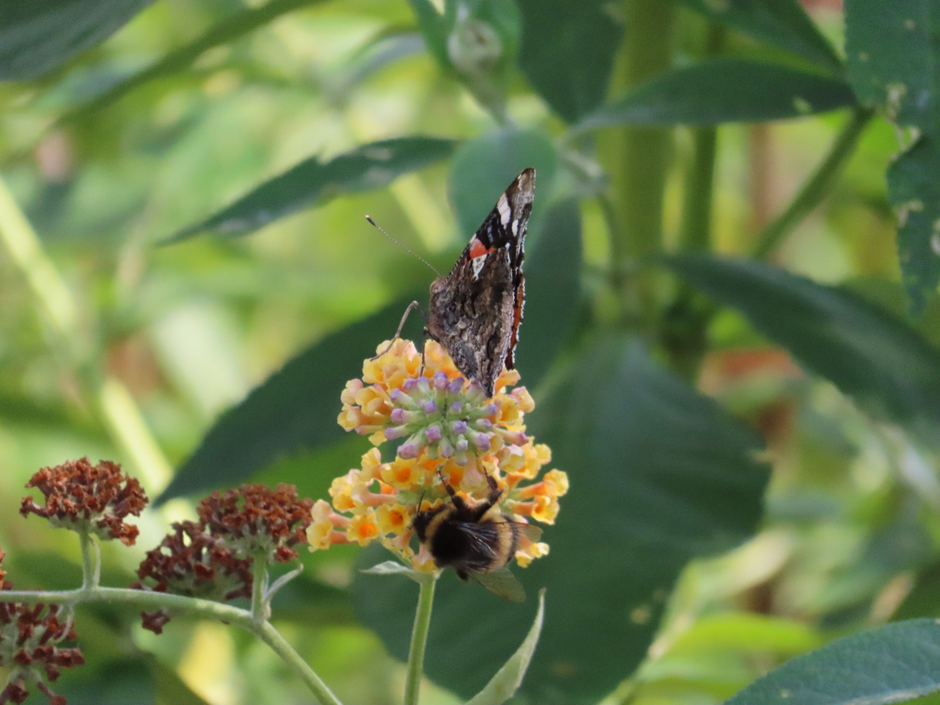 A bee and Red Admiral butterfly share a Buddleia flower

The summer made a surprise return towards the end of August and the garden had a few extra weeks of sunshine. It did not take long to get used to using it as a dining and sitting room and deferring heavy work for cooler days. For the garden it was a mixed blessing. The courgettes started to produce a crop to my surprise and the potatoes have been a success. However, the lack of rain has now become a problem and there is still none in sight. The mop head hydrangea are particularly vulnerable to drought and I select a few shrubs each evening for a good soaking from my dwindling supply in the water butt. Sometimes it feels as if I may have to choose between life and death for some of them especially as the water runs low.

Despite the drought and its impact on the hydrangea it is still possible to find a selection of blossoms for the house. Although the lace cap varieties seem to weather the drought better than the mopheads I have been able to salvage a few to add to the bouquet. 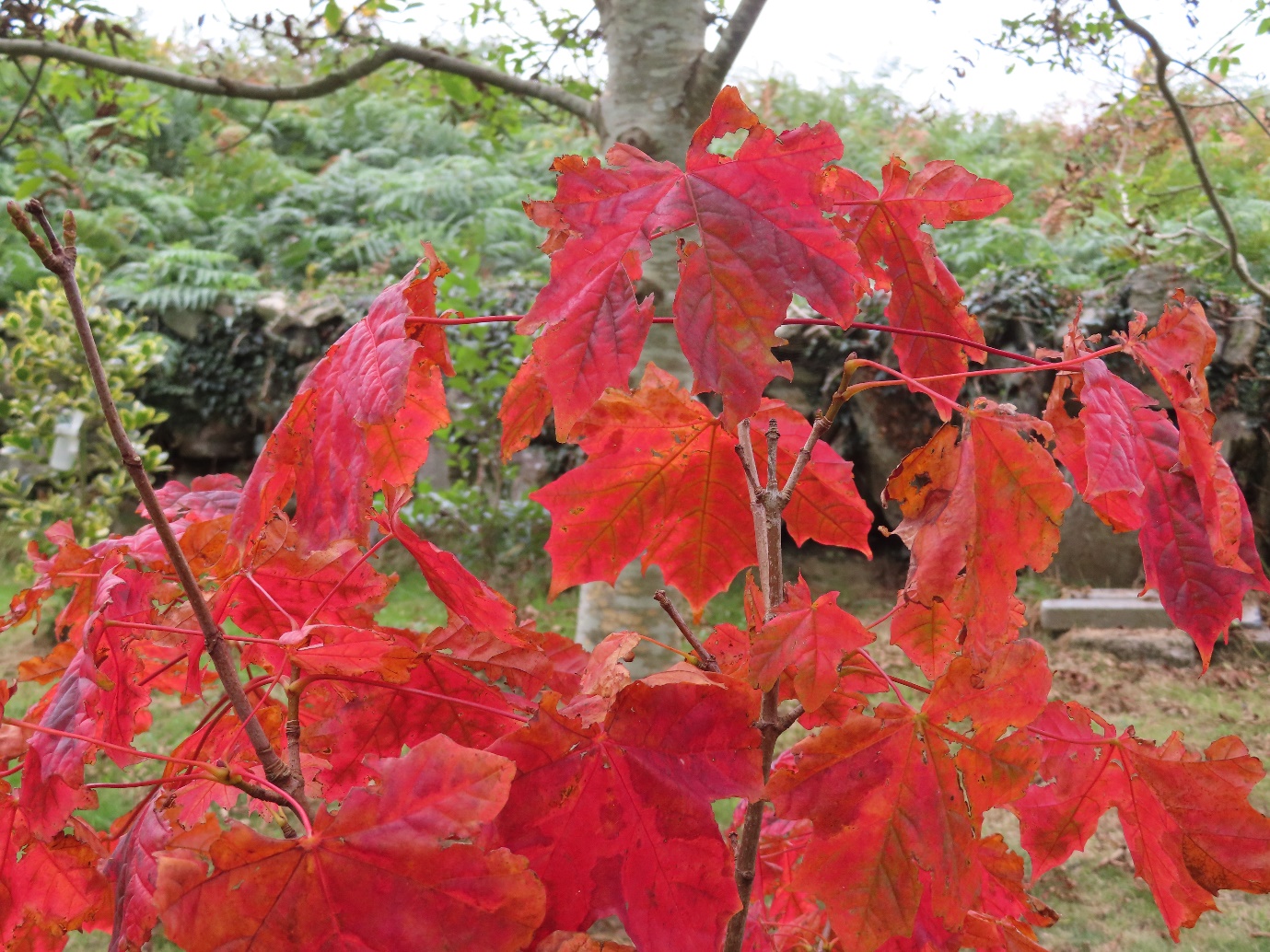 A sudden glimpse of autumn on the driveway

Despite the warmth there are signs of autumn everywhere. The swallows have started to gather on the telegraph wires by the cove and the leaves are starting to turn on some of the trees as autumn tries to reassert itself. One of the strangest experiences has been the lack of wind which has been replaced by the constant ‘singing’ of the seals in the bay. The sound manages to be both haunting and soothing at the same time. It has become such a part of my daily routine that I will miss them when the winds return and ‘drown’ them out. 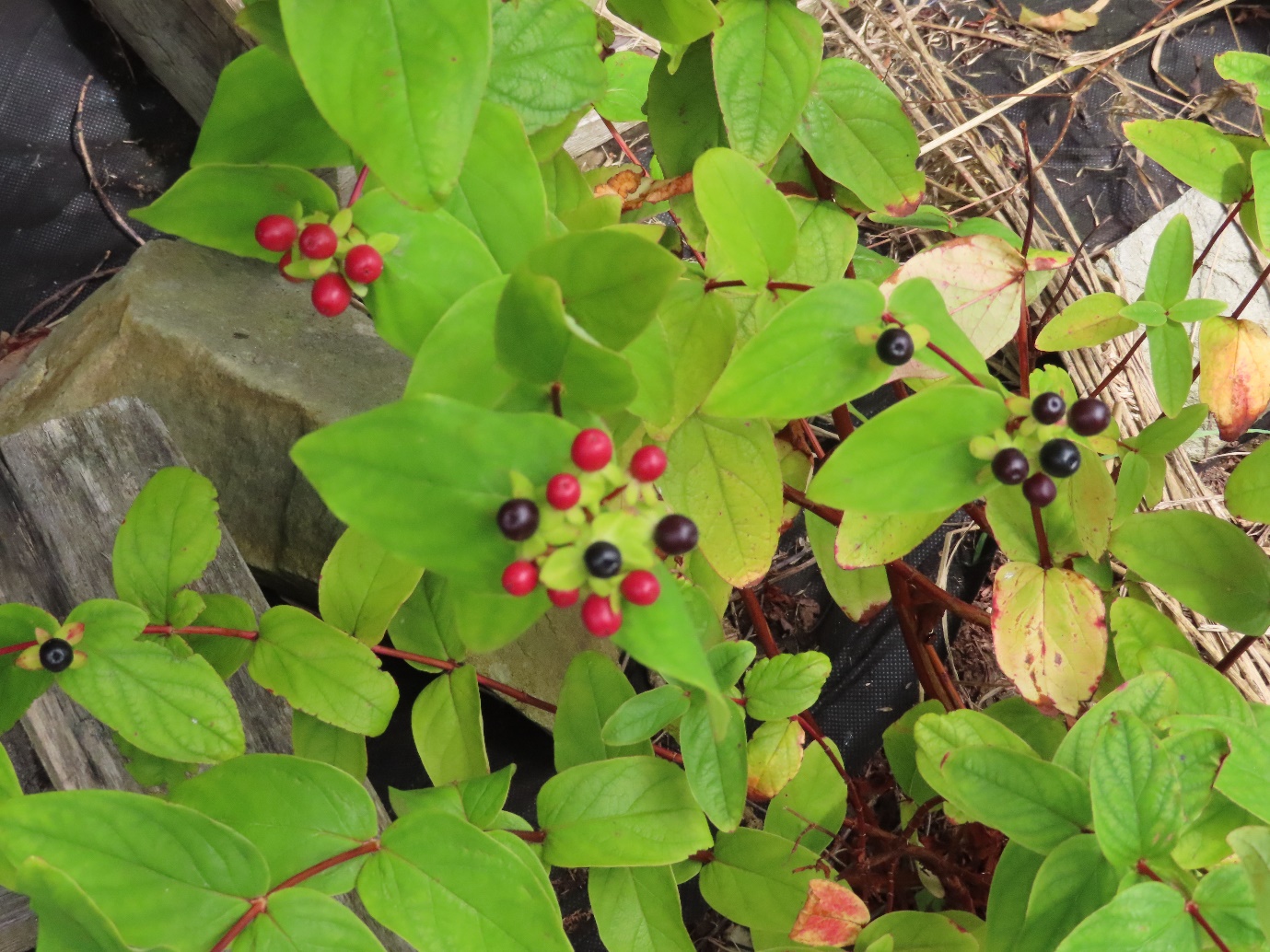 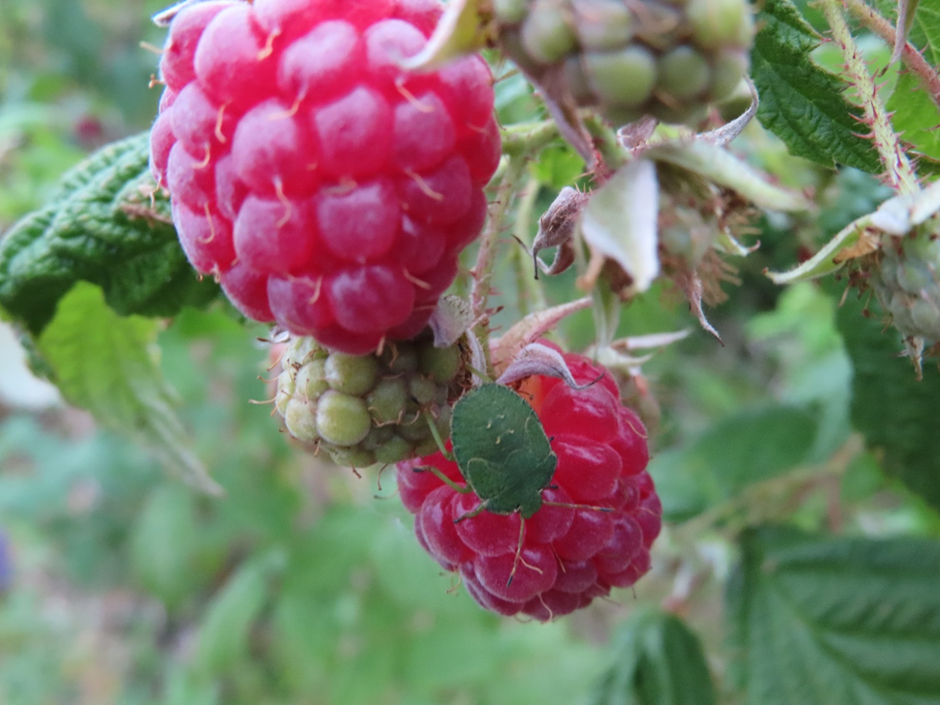 A mid instar nymph Green Shieldbug exploring my autumn raspberries. Unlike the bird they do little or no damage and I have a regular supply for my evening dessert.

This is the time of the year when shieldbugs make their appearance and to date I have found four varieties in the garden: Hairy Shieldbugs, Hawthorn Shieldbugs, Dock and Green Shieldbugs. They are usually concentrated on the seed heads of the Sea and Wild Carrot but this year I have found some enjoying my autumn raspberries. I find these creatures fascinating and I enjoy the rare glimpses that I get each year although I am sure there are many more in the undergrowth. 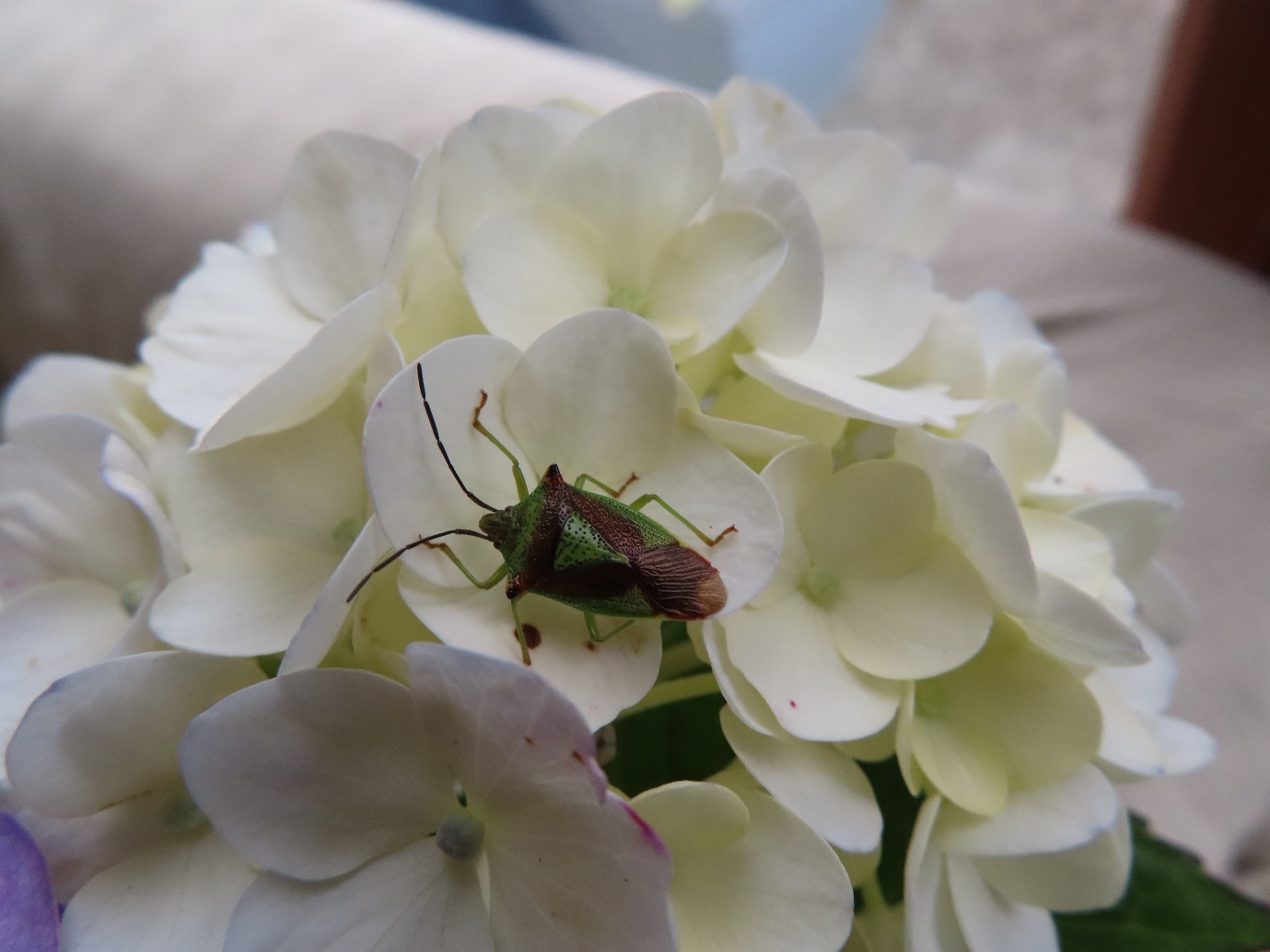 A hawthorn shieldbug resting on a hydrangea. 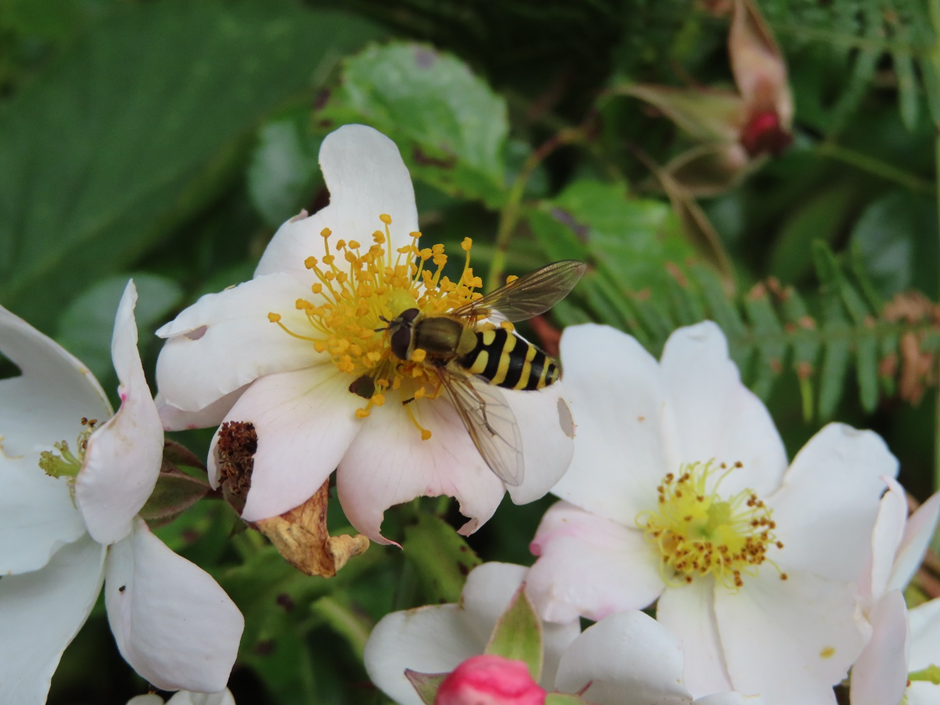 The hoverflies really come into their own in August and September and this black and yellow specimen was caught feasting on the rambling roses at the bottom of the drive. I am reluctant to name it as it would only be a guess but am studying the biodiversity pamphlet in the hope that one day I will be able to distinguish between the many similar species. 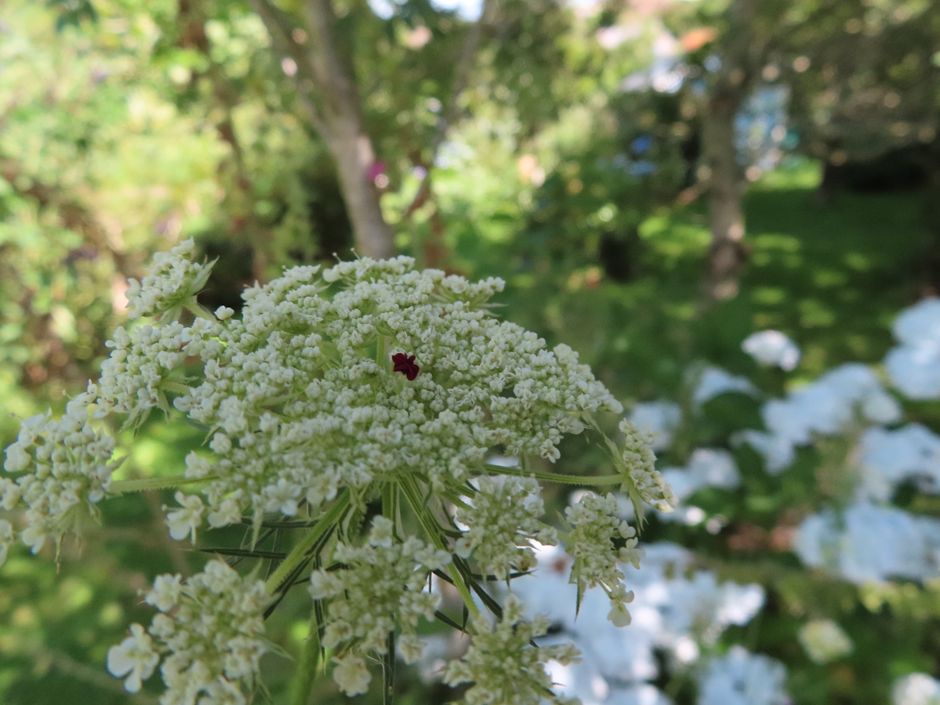 The Sea Carrot and Wild Carrot are closely related but the latter can be identified by the tiny wine-coloured flowers in the centre. In my garden it usually arrives after the Sea Carrot and seems to enjoy light shade. Both plants flower for months on end and while they choose where to grow each year, they often seem to pick a spot where they complement my own planting. 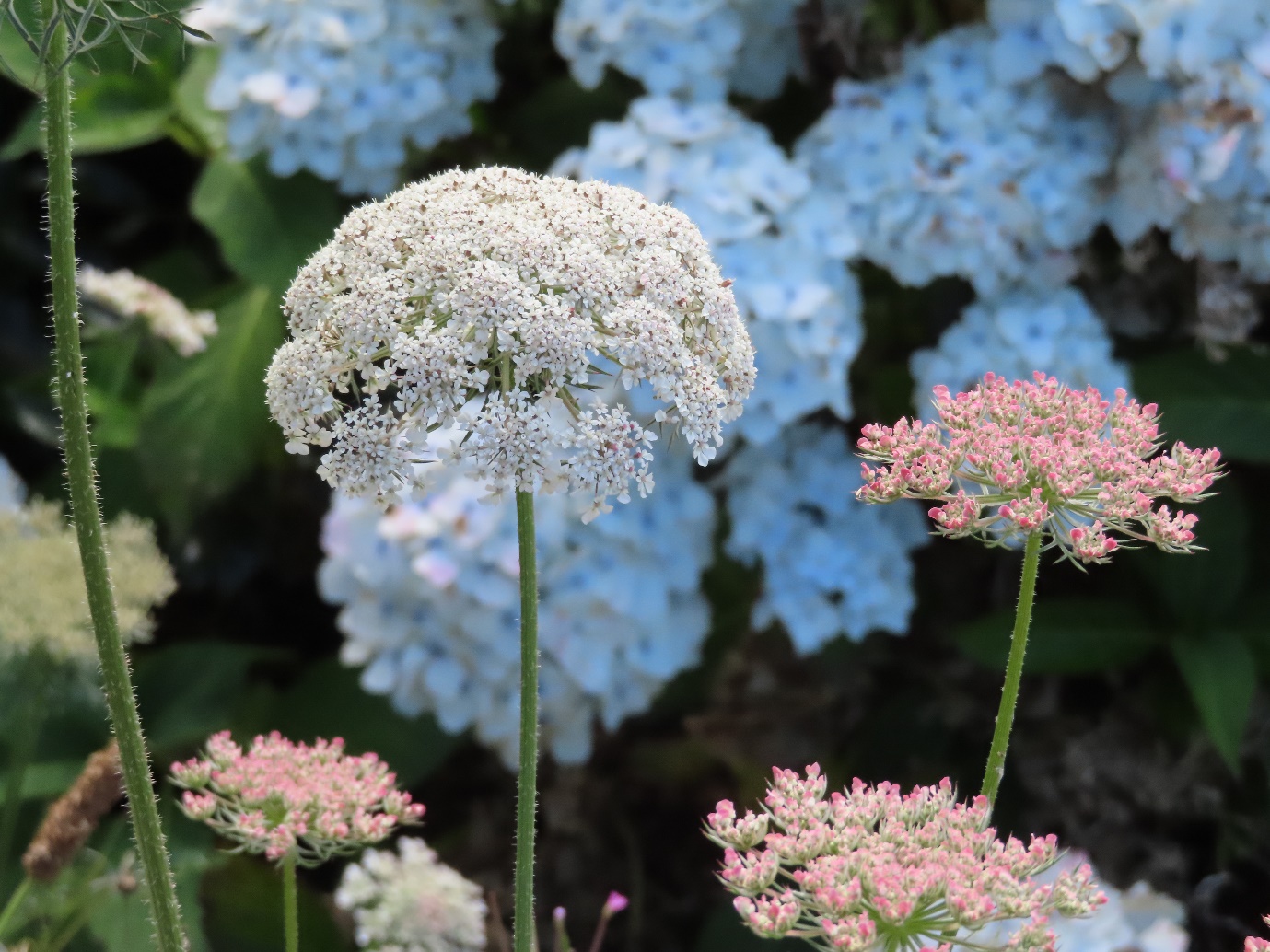 Sea Carrot in my hydrangea hedge. The flower colours can often range from white to a deep pink.

The unseasonal weather continues and it is still too hot to do heavy work in the middle of the day. The shrubs seem mollified by a day of light mist and a smattering of rain but could do with a good soaking to bolster them for the winter. I never thought that I would long for rain but would quite happily welcome a deluge for a day or two. However, the arrival of two painted ladies has lifted my spirits as they are obviously benefiting from the long summer. 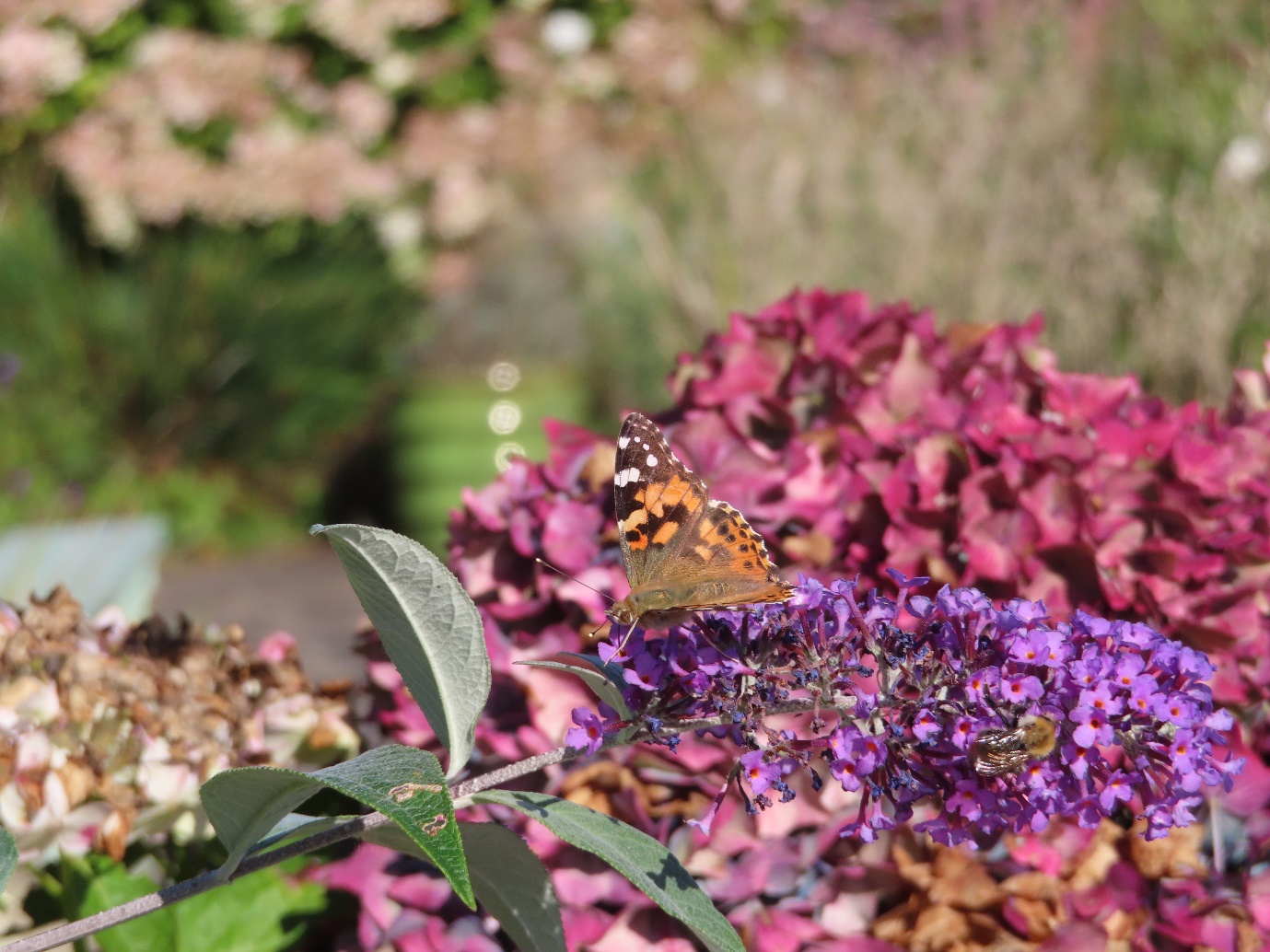 All the way from North Africa.