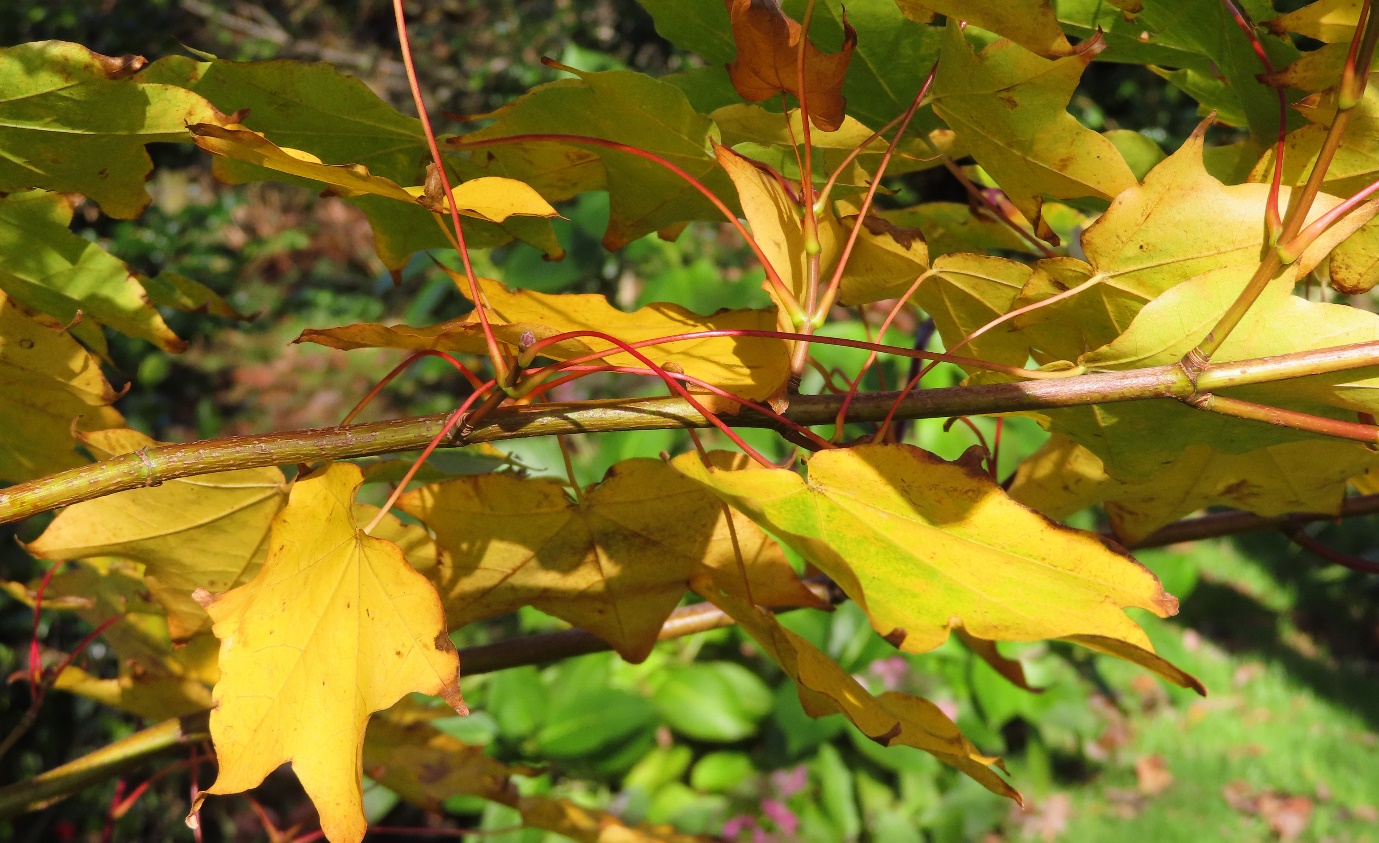 Growing up in the south east of Ireland I never took vivid autumn colour for granted. Most years the leaves were a dull brown and only remarkable for the amount of time it took to rake them up. For my twenty years in the north east of Scotland the exact opposite was the case. The winters were bitterly cold and hot summer days were rare. You could ‘smell’ the frost in the air in August – a harbinger of things to come. Walking in the lower reaches of the Cairngorm mountains was always a pleasure. Waking in autumn was stunning. The rowan leaves and berries were a beautiful contrast to the vivid yellow of the ferns underfoot. A touch of early snow could turn the picture into a masterpiece. On one or two memorable occasions the already perfect day was rounded off by the eerie sounds of stags challenging each other across the mountain tops just before dusk. 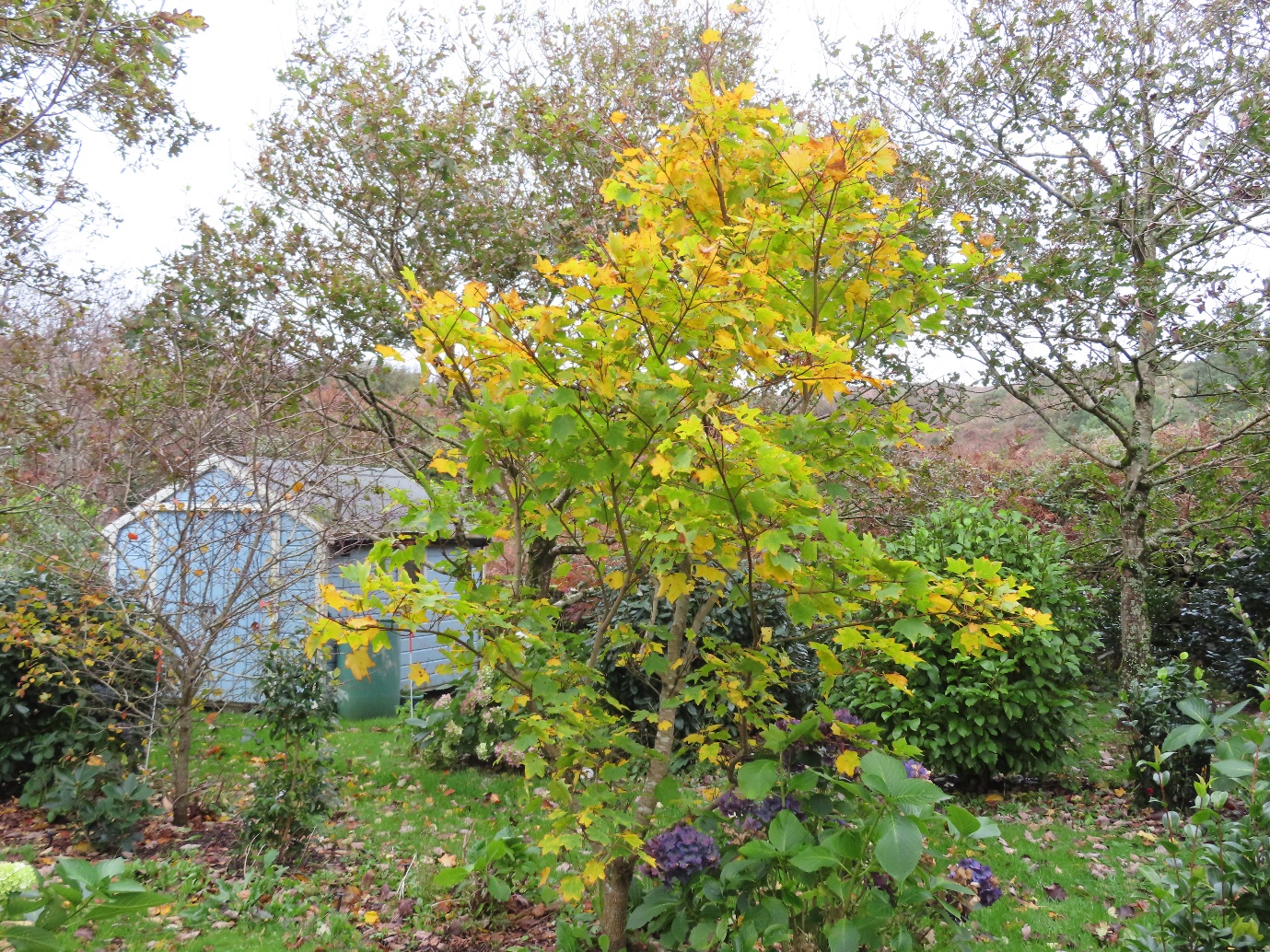 This year here in the south west of Ireland almost all of my large trees and some of my shrubs lost most of their leaves over a month ago thanks to storms Ellen and Francis. The remaining leaves are the dull, dry, drab brown of my childhood. These are just waiting for the next storm to provide me with another raking task. There are a few exceptions. The ornamental cherries continue to amaze me as their leaves remain untouched by the storms and may still provide some colour when they turn. A lovely acer which spent three years in a pot while I searched for a home has found the perfect spot in the middle of the copse and is gradually turning a luminous yellow. 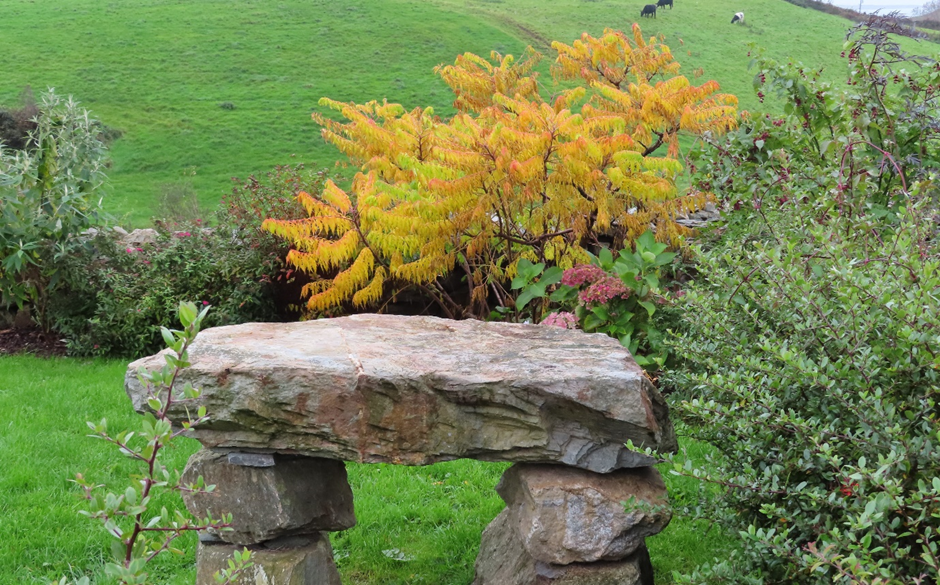 Staghorn sumac in the prehistoric garden

There has been one constant source of autumn colour for the last few years. The staghorn sumac starts as a brilliant yellow and then sometimes turns to a vivid orange red. This amazing tree sits in a corner of what I call the prehistoric garden with no protection from the winds that howl around it year-round. Yet today its leaves are still intact and the colour promises to be as good as last year.

I have planted shrubs to increase the chances of autumn colour in the garden. Sadly, the chokeberry bush, usually a reliable showstopper, was one of the first to lose its leaves. These are a dramatic red in the autumn but as you can see from the bush below the effect is muted by the early leaf loss. 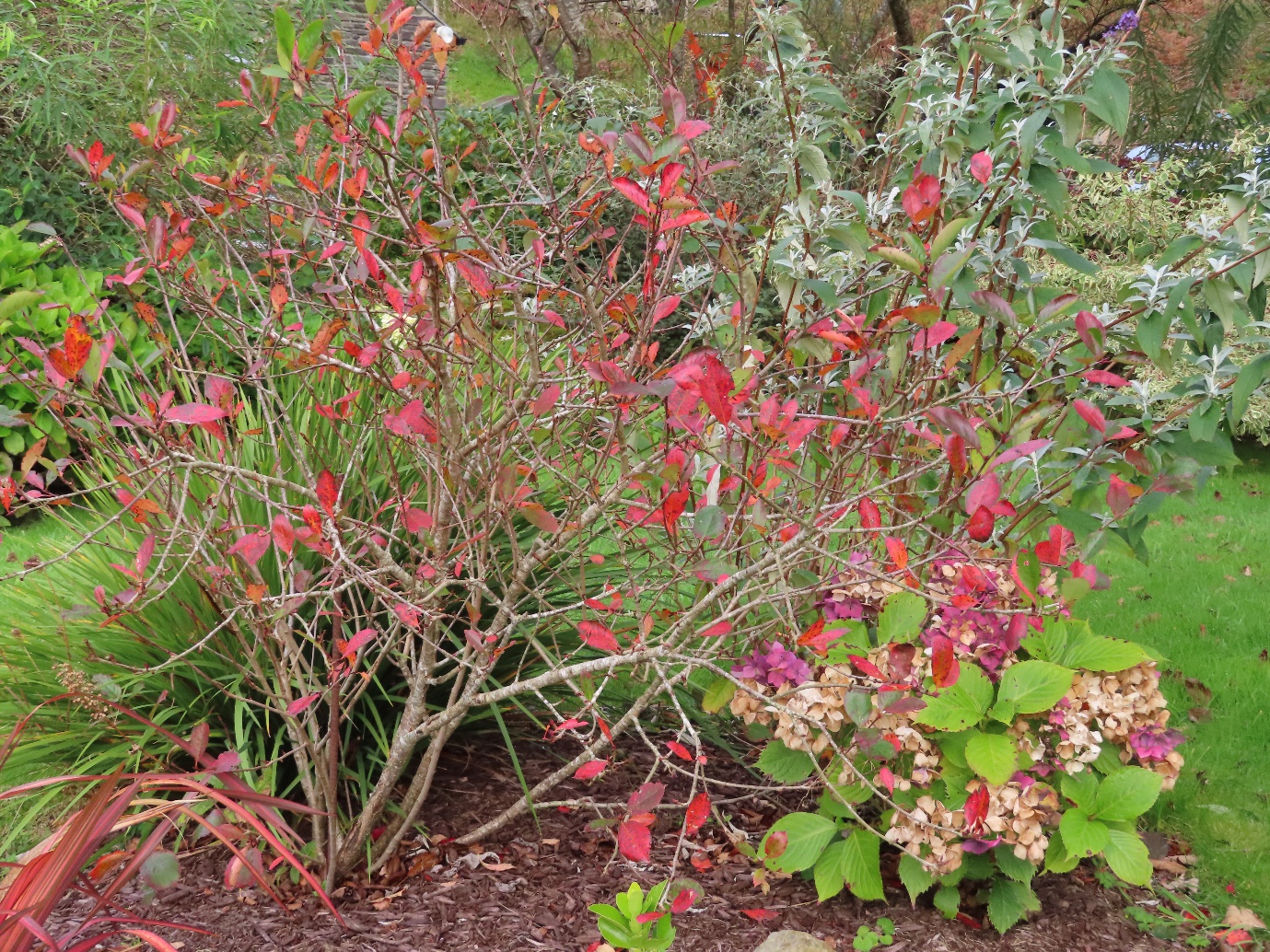 The Euonymus Europaeus or Spindle tree below has also lost many of its leaves but the unusual orange and pink seed heads provide colour and are a favourite of at least one of the blackbirds in the garden. Not only does he visit the hedge that I have planted at the side of the house each morning but on one or two occasions he has been joined by a wren and a robin. 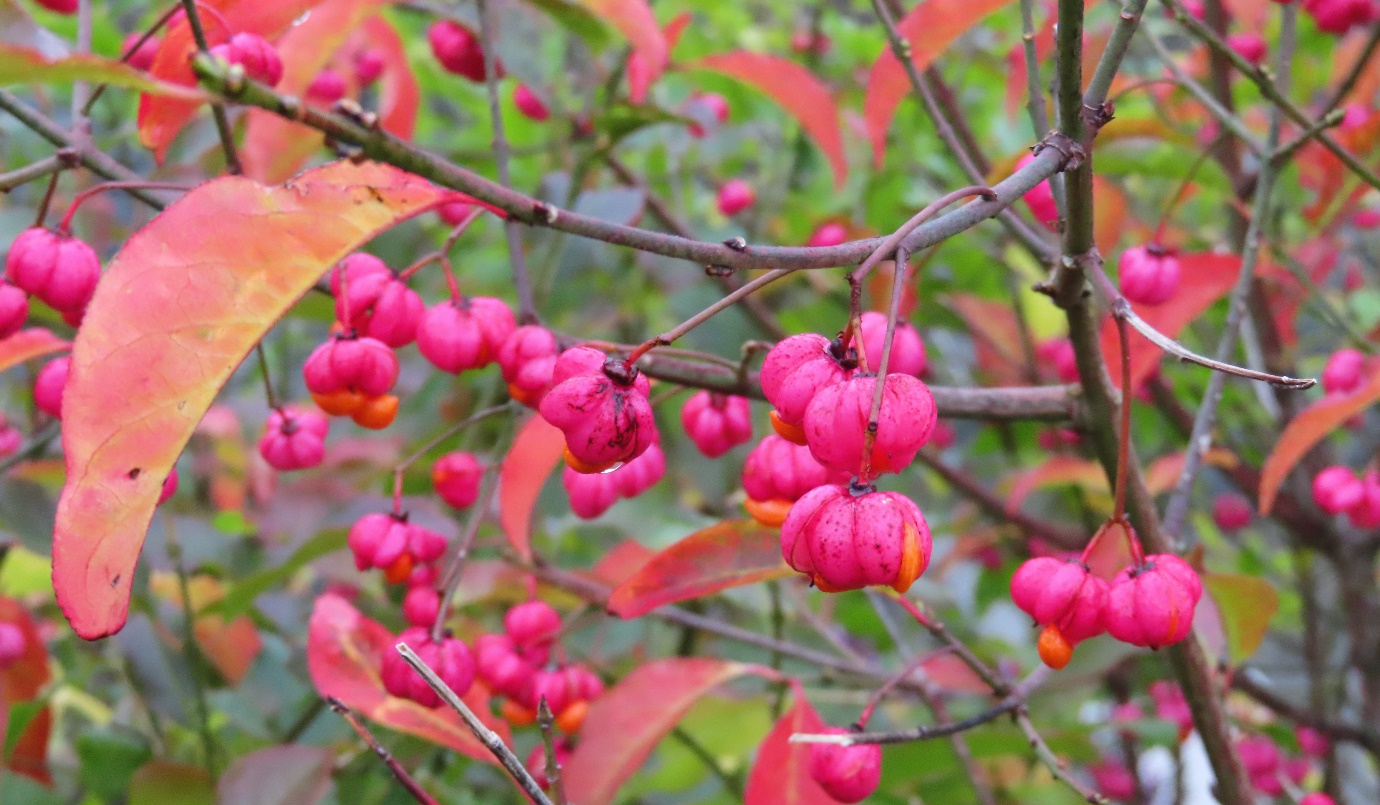 The various berberis also are a reliable source of autumn colour. They require shelter here and so keep their leaves despite the storms. Berberis Juliana is particularly colourful especially if the berries are still on the bush. 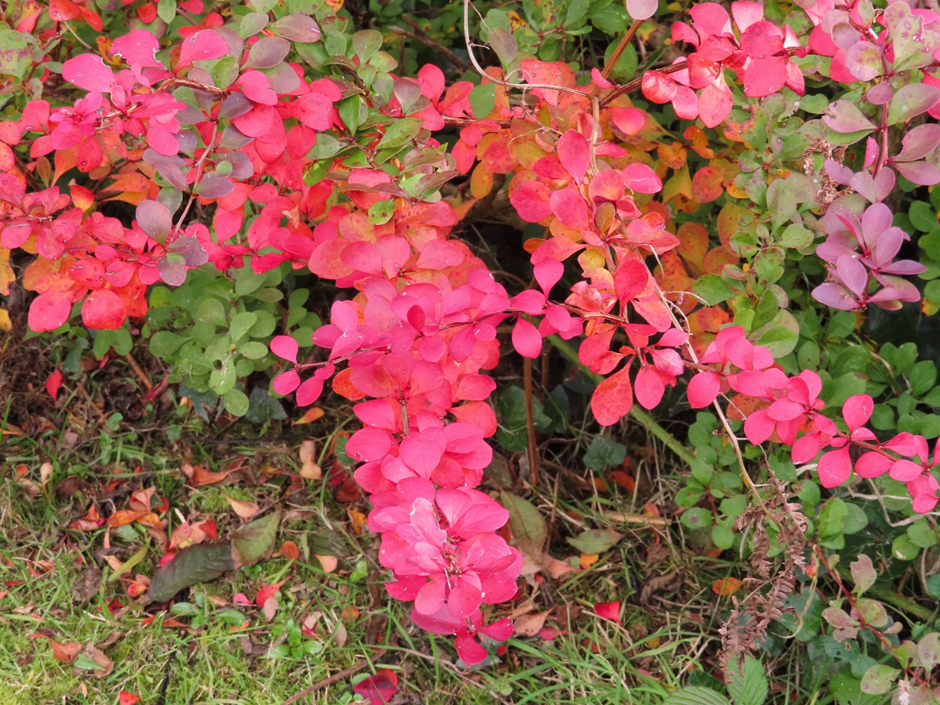 The last three weeks have been very busy as I was finally able to have some proper paths created to replace the black plastic and stones that were used as a temporary measure eight years ago. As the garden is on a slope my man-made paths have been difficult to transverse, particularly in wet weather. The many stones used to secure the plastic has made them veritable death traps for much of the year and present an obstacle course for the lawn mower as I move from area to area. 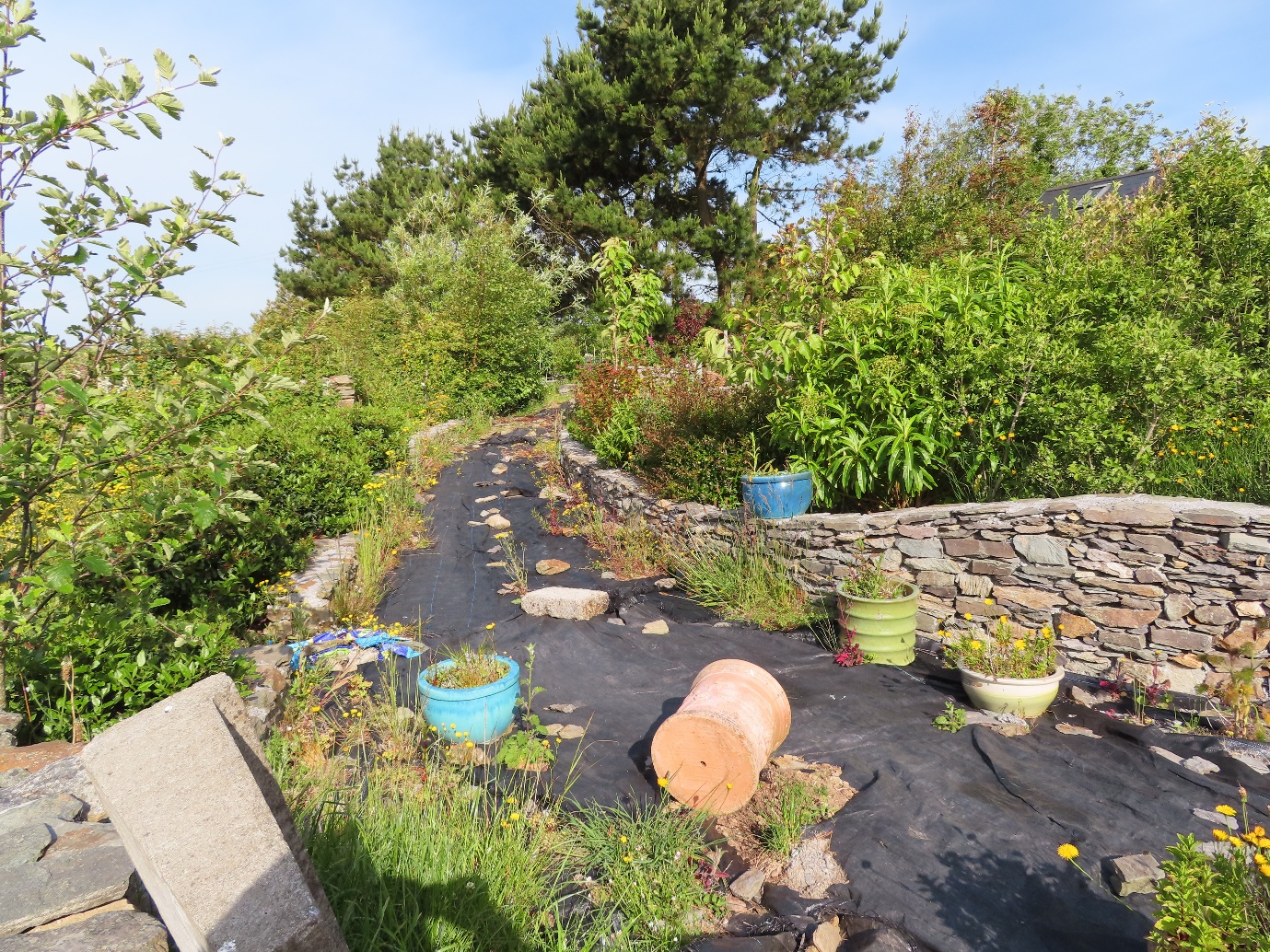 One of my many eight-year old ‘temporary’ paths 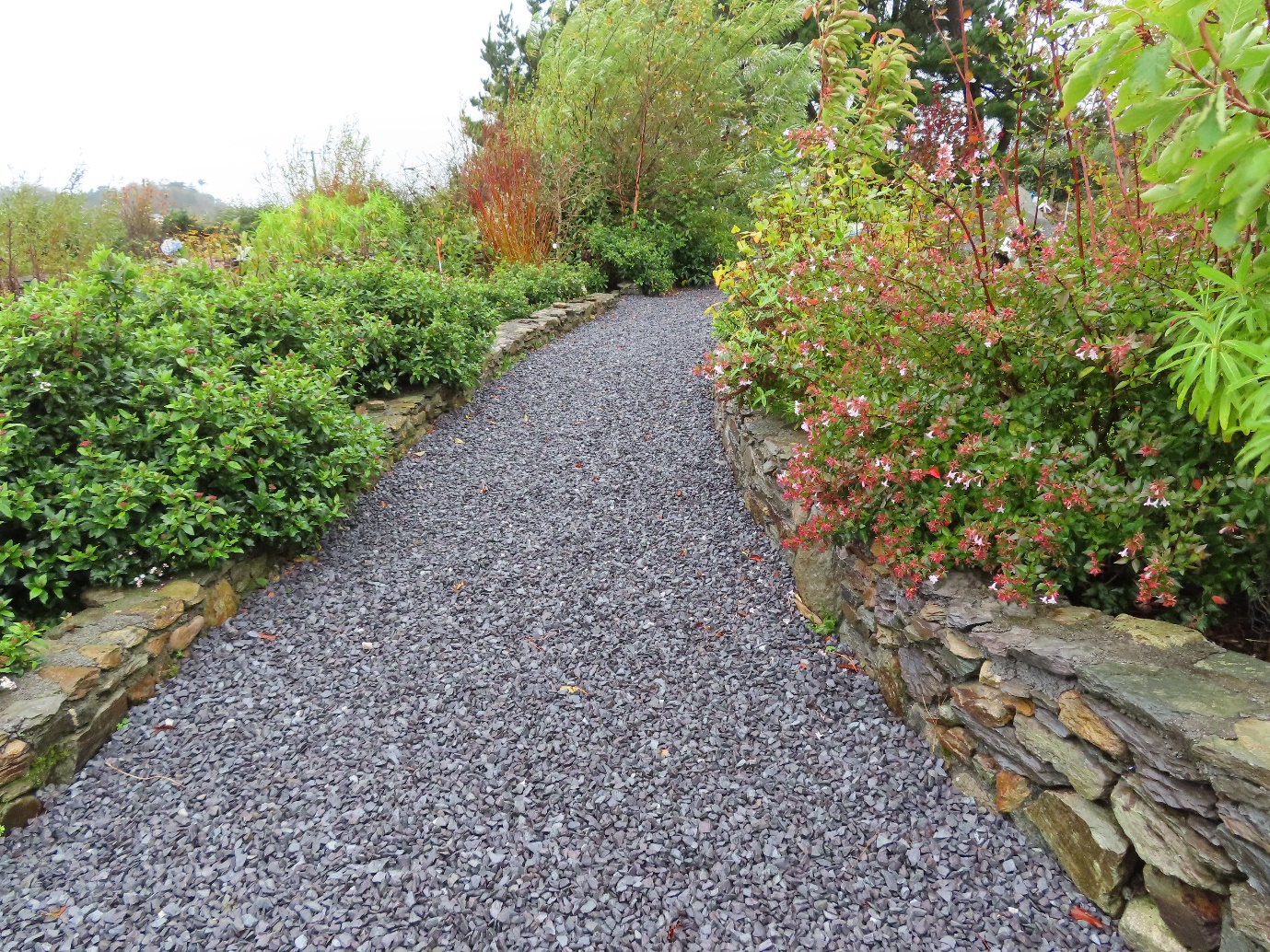 I still can’t get used to the pleasure of walking on safe surfaces and as I am also committed to getting rid of all plastic in the garden, I have not used it as a barrier here. This is a big step in the right direction and will also allow the wildflowers that seeded this year to come through again.

I was also able to have a retaining wall built on the driveway in an area that has been filled with builder’s sand for many years. I decided to add a seat that looks out to the islands to enhance my coffee breaks. The final touch is a lovely stone cutting of dolphins by my friend Antonio Fatzio from Dingle.

While the main work on the paths and the walls was carried out by professionals, I spent many hours preparing the areas before they started. This involved back-breaking work collecting stones from all parts of the garden, clearing away the builder’s sand and generally acting as a ‘handyman’. I learned a lot in the process, including the fact that sand is even heavier than stones especially when wet and that I am not as young and as strong as I used to be. I decided to recuperate by taking a holiday from heavy gardening before the bare root planting season begins in earnest. This has coincided with the onset of the second lockdown to try and curtail the spread of Covid-19 so I suddenly have plenty of time on my hands. It has given me ample time to take stock of how the garden is progressing. It is now hard to believe that many areas were once open fields and I can hardly believe the growth in just nine year in the oldest parts of the gardens.

The most dramatic area is the hillside to the east of the garden. This was an open area where the ground dropped steeply to a barbed wire fence. My first task was to plant a hedgerow to provide some shelter. 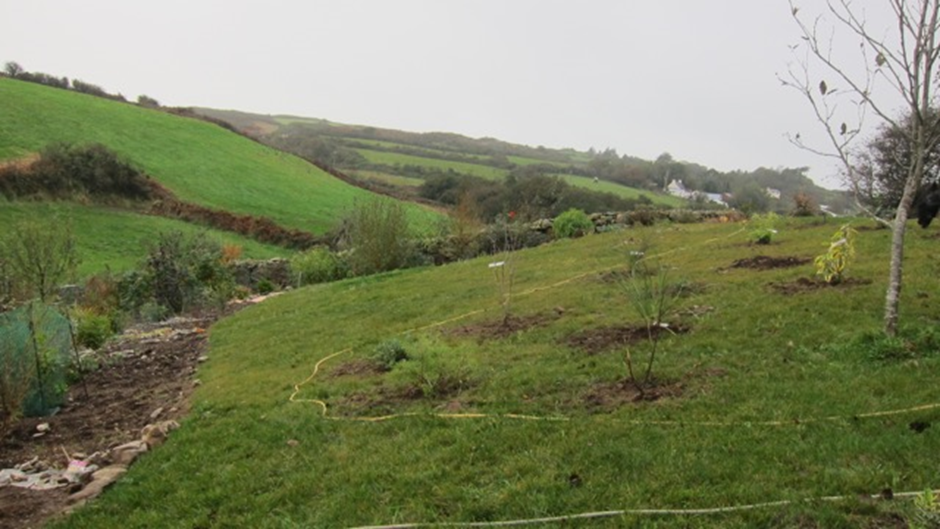 My next task was to divide the area into shrubberies and paths to cut the chill wind that seemed to roar through the area for much of the year. I planted a mixture of shrubs and the occasional tree as it soon became obvious that the hillside consisted of a very thin layer of soil on top of solid rock. 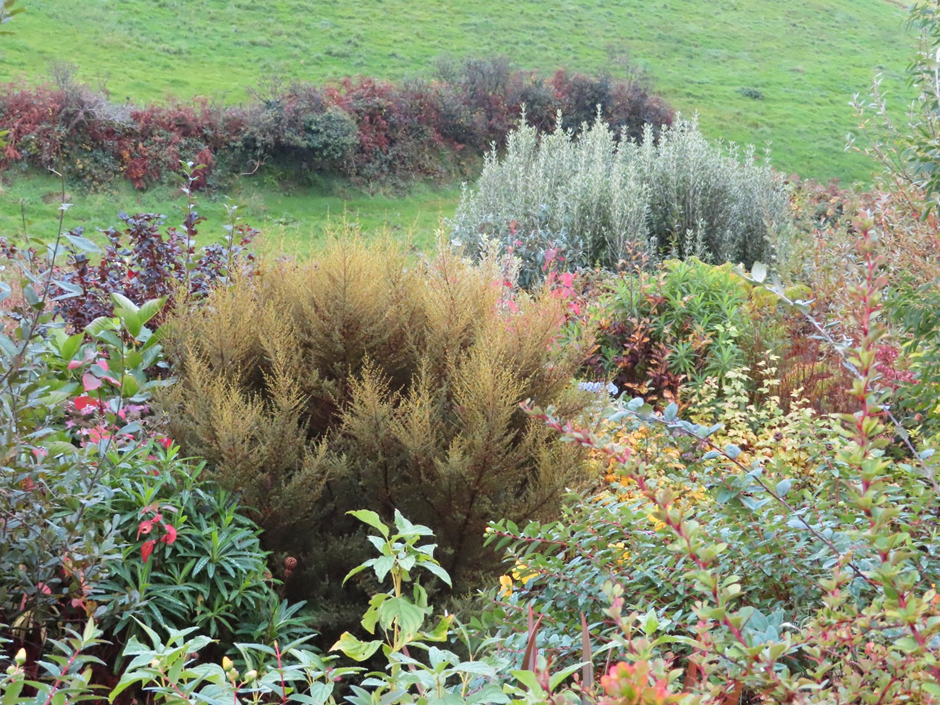 The south corner of the hillside area in 2020 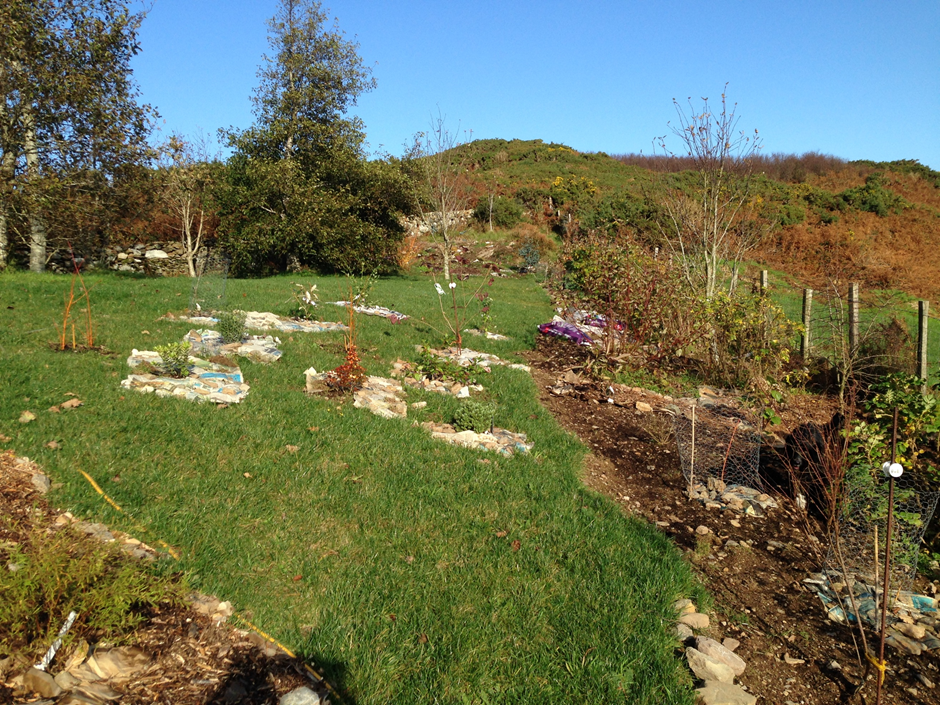 Planting on the east side of the hillside

This involved using a lot of paper and cardboard as mulch which has proved to be very successful. 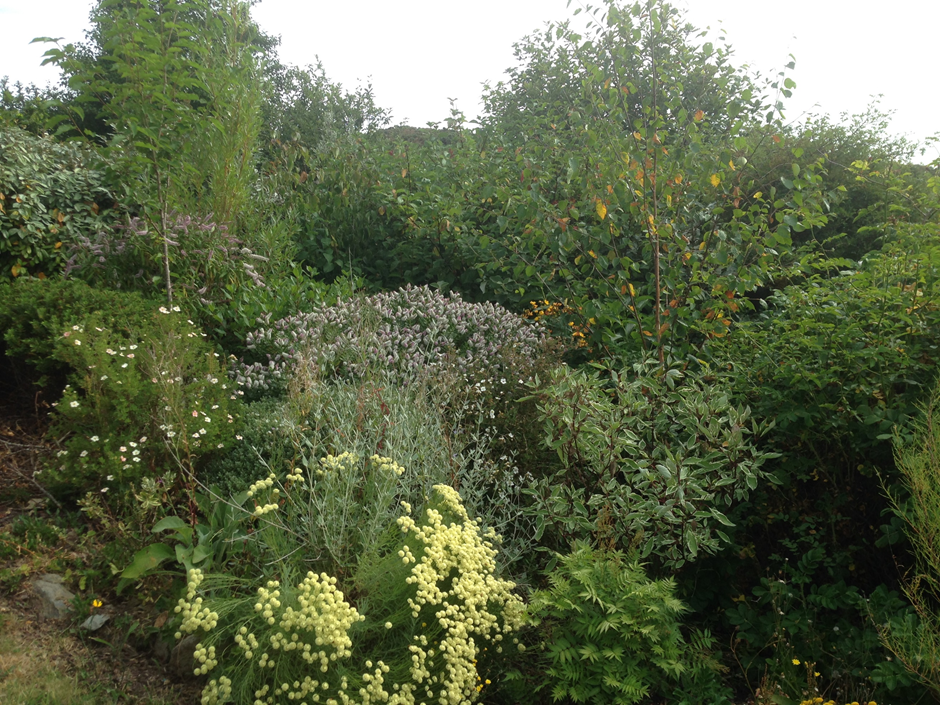 The east side of the hillside in 2018

I am particularly pleased at how this area has developed. Four paths separate the shrubberies and the area is now a sun trap. You can even sit out in winter on a sunny day without even knowing that there is any wind. I look forward to using the time available during the lockdown to reviewing the rest of the garden.

I had thought I had finished my cordial making when I came across some hidden fruits on a secluded Malus Gorgeous and a Malus Golden hornet. Between them there were enough crab apples for one last batch of cordial. Without thinking I emptied them all into a saucepan and started the cooking process.  I did not realise my mistake until it was too late. The ‘Gorgeous’ crab apples took twice as long to soften as their companions and I was left with a thick paste by the time they were ready to sieve.   I now have a couple of litres of cordial ‘sludge’ but as it is  very tasty I am not too upset. I will  know to use each type of crab apple in separate cordials in the future.

I decided to start feeding the birds yesterday as it has suddenly become very cold and windy. It took the chaffinches just a few minutes to find the food. They have been joined by blue tits and great tits so far. The pleasure of watching them in the coming months will be the perfect antidote to the restrictions of Covid-19.