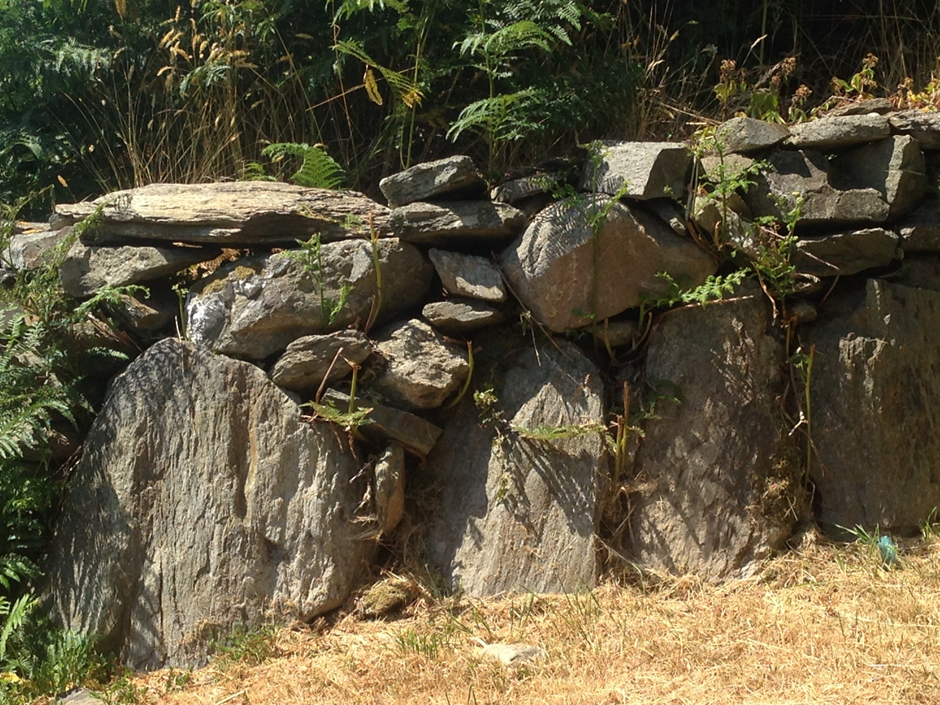 When I bought this property nine years ago, the site consisted of three acres of land used mostly for grazing and silage coupled with some small areas of mature trees. A long track took a straight path to the house at the top of the rise, so that not only were you blown about as you walked up it but your legs were also challenged by the rise. The garden took its current shape as I added an extension to the house. Approximately half of the property is now dedicated to a ‘garden proper’ and the rest is grazed by my neighbour’s young heifers. Because of the nature of the long drive the shape of the garden resembles a leg of lamb positioned from west to east. The north side of the property is separated from my neighbours by a very long stone wall which has probably been here for generations. It is a tribute to the people who painstakingly gathered and manipulated the stones with few mechanical aides. What is even more impressive is that they took the time to make these walls a thing of beauty as well as a practical boundary. I always feel that the section (see above) pays tribute to the megalithic tombs that are scattered throughout this area. 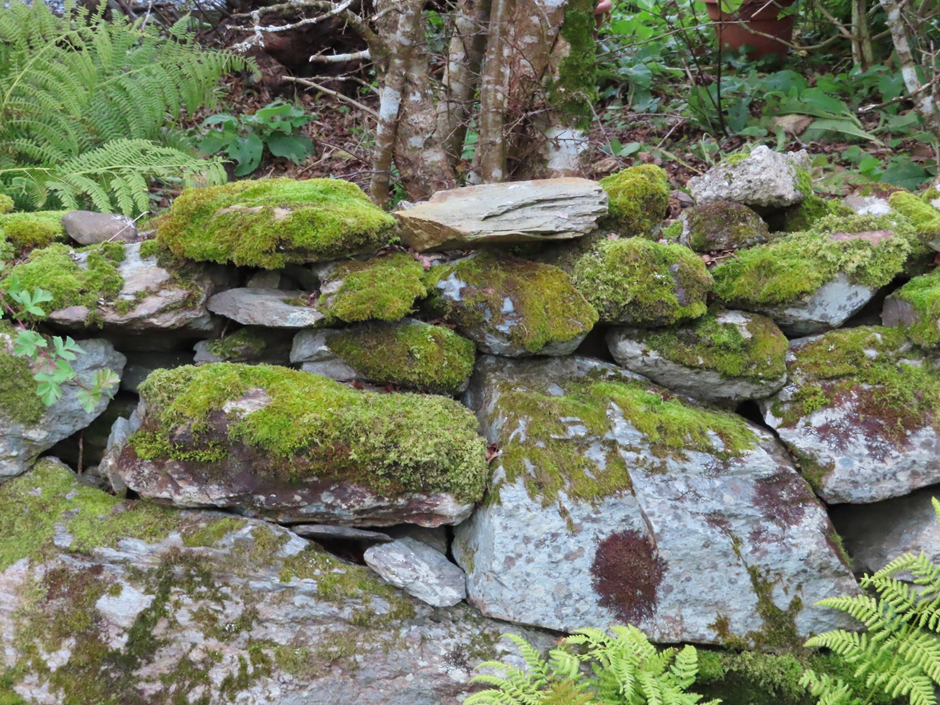 In the damper space in the copse the walls have taken on a totally different hue as they are gradually being covered by moss. You just have to look at the size of some of the stones to see the work and skill that was required to place them without machinery.

In January 2012 my very first gardening task was to plant a hedgerow on the driveway to reduce the effects of the prevailing winds, to provide shelter to the birds and to create a corridor for these and the other creatures that might visit the property. While my focus was on planting a new garden from scratch it was not too long before I had to focus on some of the walls in the property. Unlike the rest of the structures the ‘wall’ in the front of the house seemed to consist of stones of all sizes thrown together any old way and I suspect that they were dumped there ago in a loose imitation of a wall when the house was built thirty years. It seemed very unstable and I was always nervous when the dogs used it as an observation platform. I had not decided what to do with it when after a week of heavy rains the whole structure collapsed and ended up at the bottom of my field in a heap. Given the difference in levels between the ‘garden’ and the field I had no choice but to replace it with a retaining wall. From the start I wanted any changes that I made to be sympathetic with the surrounding area. I never even considered a solid cement wall. Luckily there are a number of very skilled dry-stone wall makers working locally and with the help of a digger for the bigger stones I soon had a beautiful retaining ‘dry stone’ wall. This will probably last forever and will settle into the landscape very quickly. 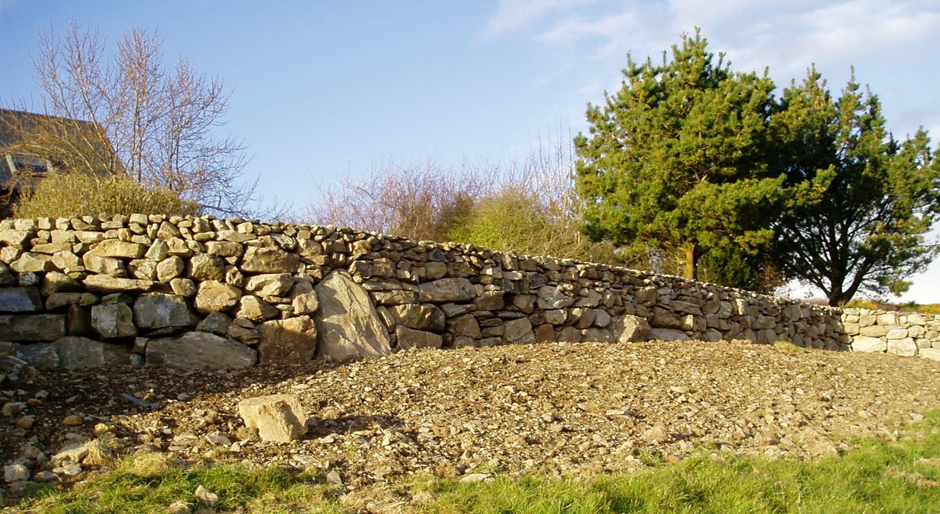 The next task was to deal with the mound surrounding the gas tank. This consisted of a heap of slippery clay soil covered by small stones. It was never an easy climb in good weather and became a death trap in the rain. I now had a very talented dry-stone wall builder to hand so it was a natural choice to enlist his aid in sorting the problem. I had seen other examples of his work and decided to have a different style in this area which was close to the house. In a short space of time I had a lovely curved structure with a seat facing south and steps to make the tank accessible and safe. 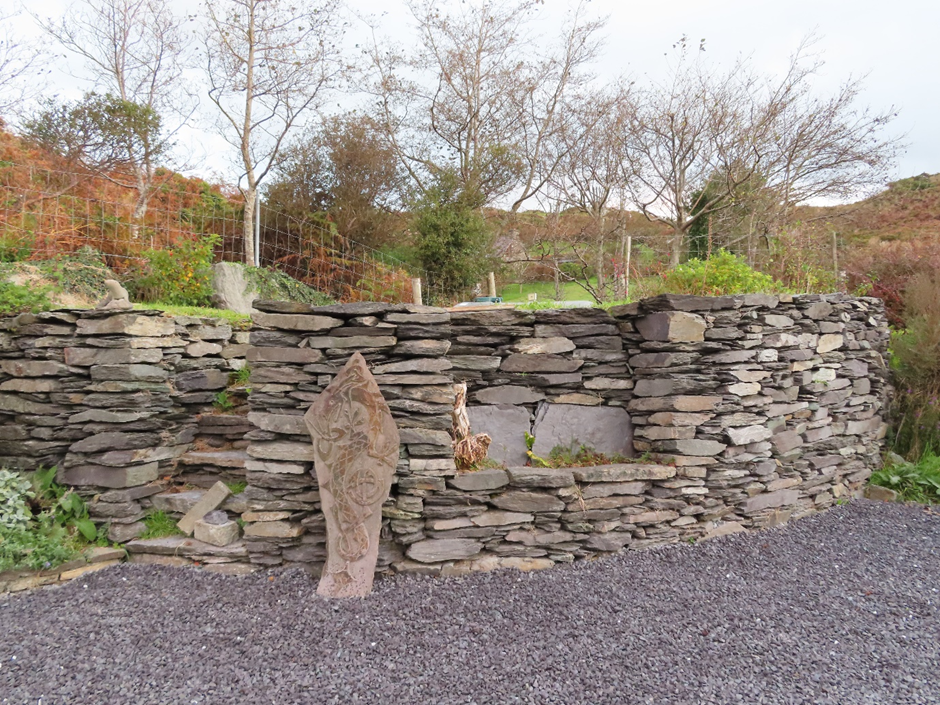 The oil tank is hidden behind this lovely curved wall 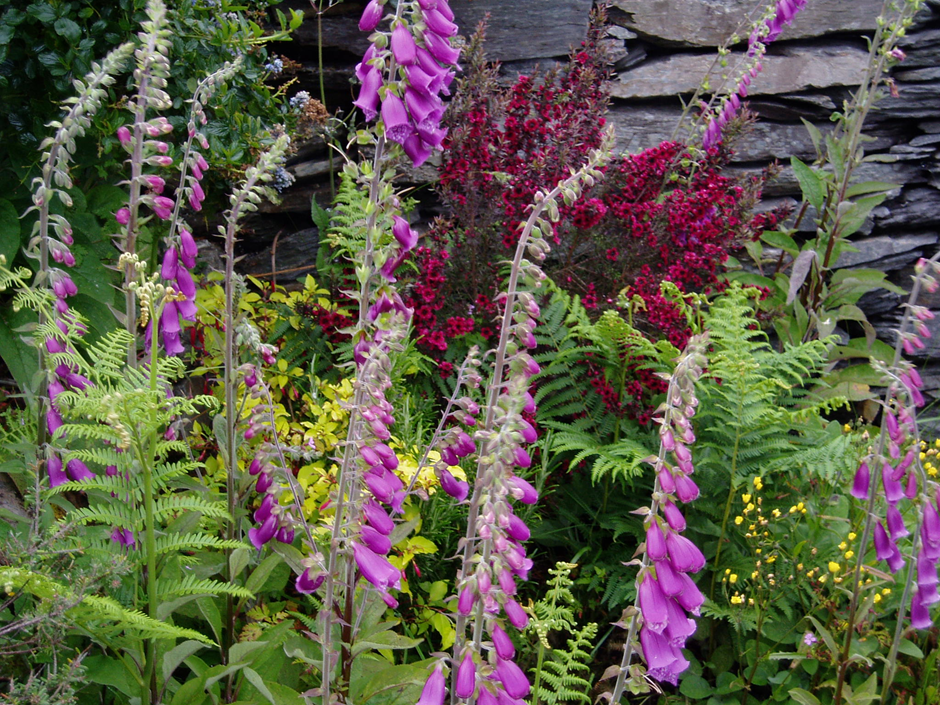 Details of the wildflowers and plantings

Beside this structure was what an area that I call the ‘creepy corner’ This was covered with ivy and large stones and was rather gloomy. I was always reluctant to work there as it seemed the perfect place for rodents. I finally got up my nerve to clear the area and decided to practice my own skills in wall construction. As you can see from the following photograph, I should have left it to the experts but I felt that I had, at least, exorcised the area of furry creatures and made some kind of mark on the landscape. 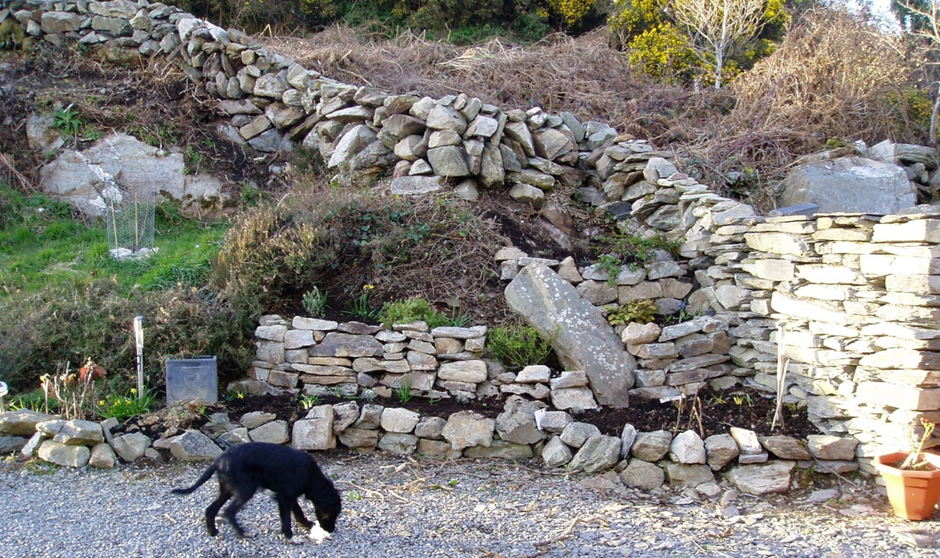 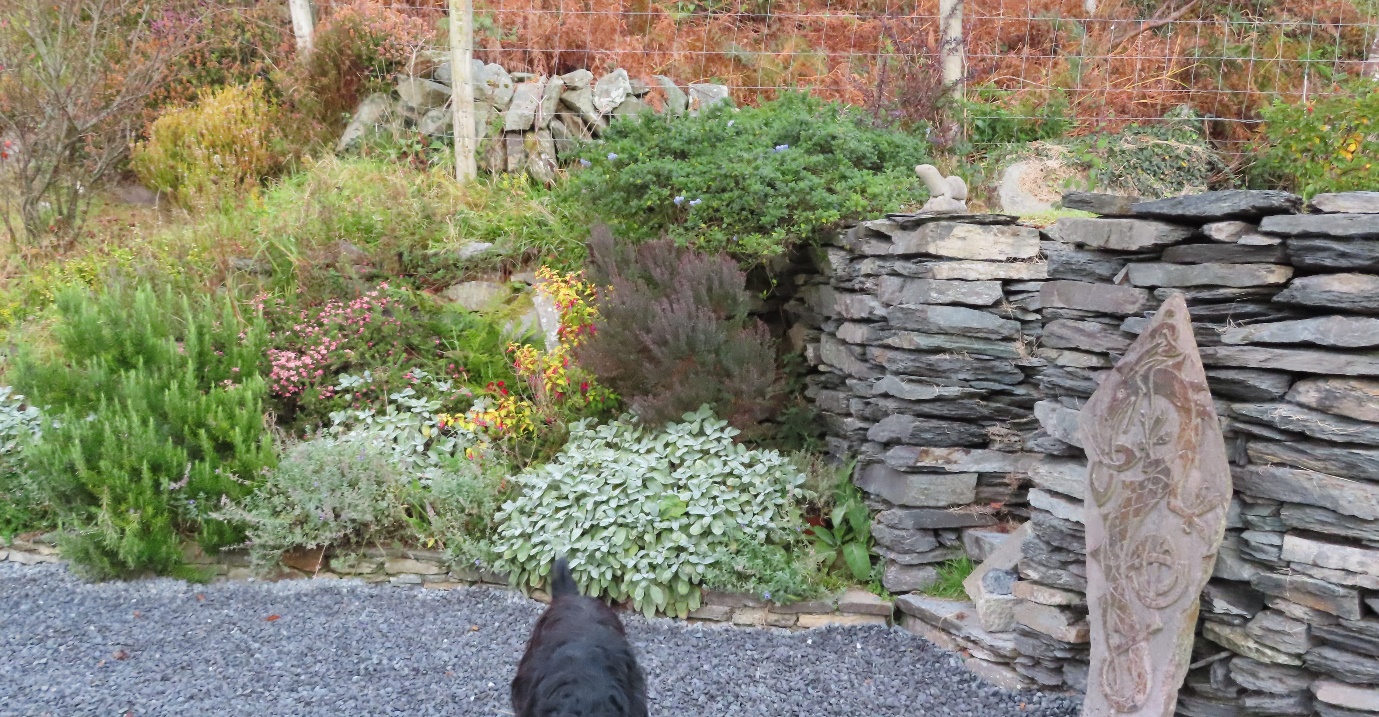 The creepy corner has now become a small herb garden. It puzzles me that while this is as overgrown as the original, I have no concerns about plunging my hands into the depths to weed and trim the area.

People would be justified in thinking that I seemed to spend a lot of time building walls in the ‘garden’ as there was still a lot more wall building to do. Much of this was dictated by the land itself. Once my extension was built the property stood on a large platform with the previously mentioned drop to the steep field. Another boundary was required. This was the biggest project by far. Initially the plan was to build a retaining wall with the mounds of stones heaped around the property. It was hoped that there would be enough to build three quarters of the required wall. As the dry-stone wall was being built the soil was riddled to make it more suitable for gardening. The resulting stones allowed for the creation of five small gardens along the front of the house. 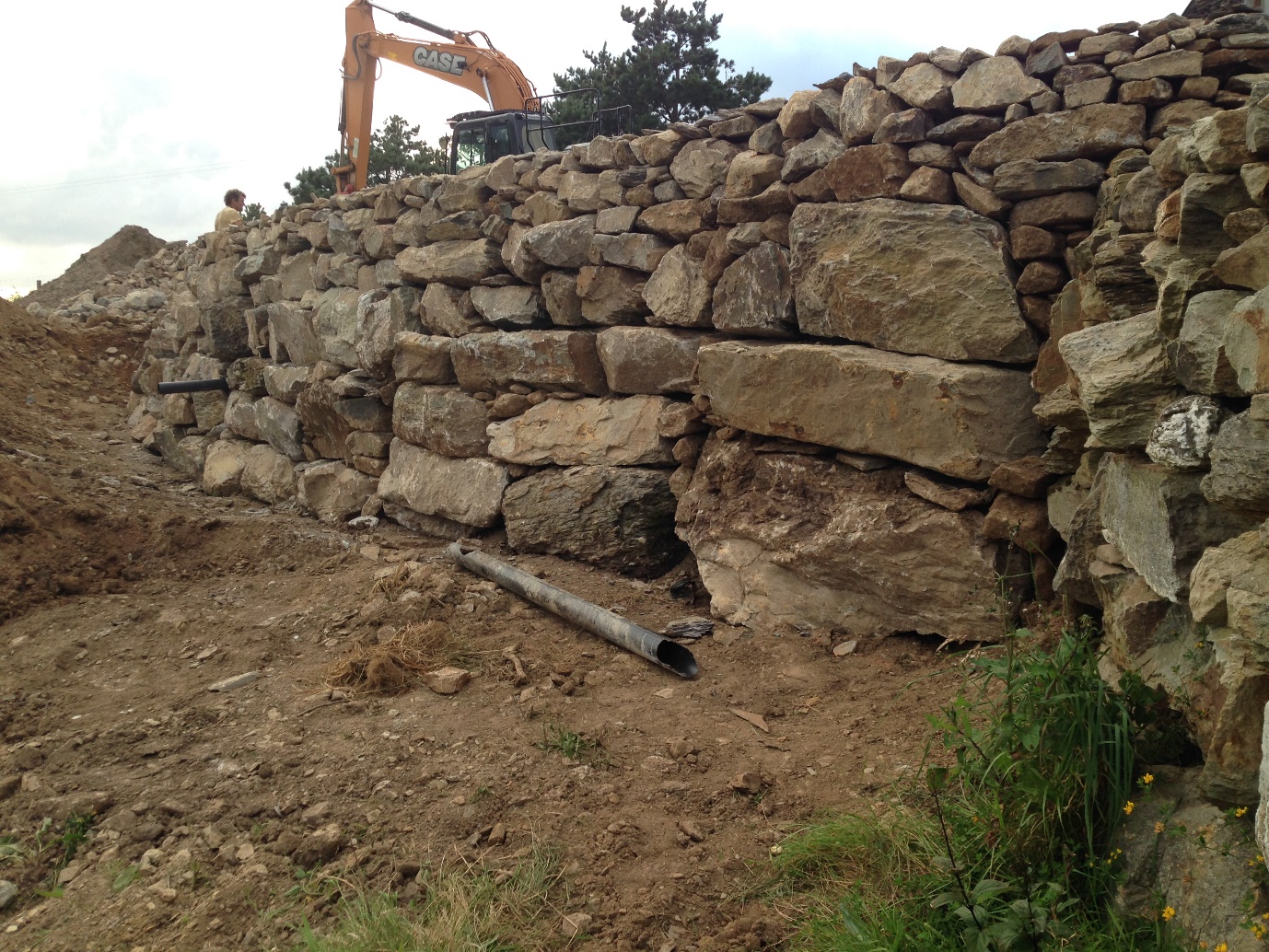 The retaining wall under construction with the mounds of stones in the upper left-hand corner. At its highest this is about nine feet high 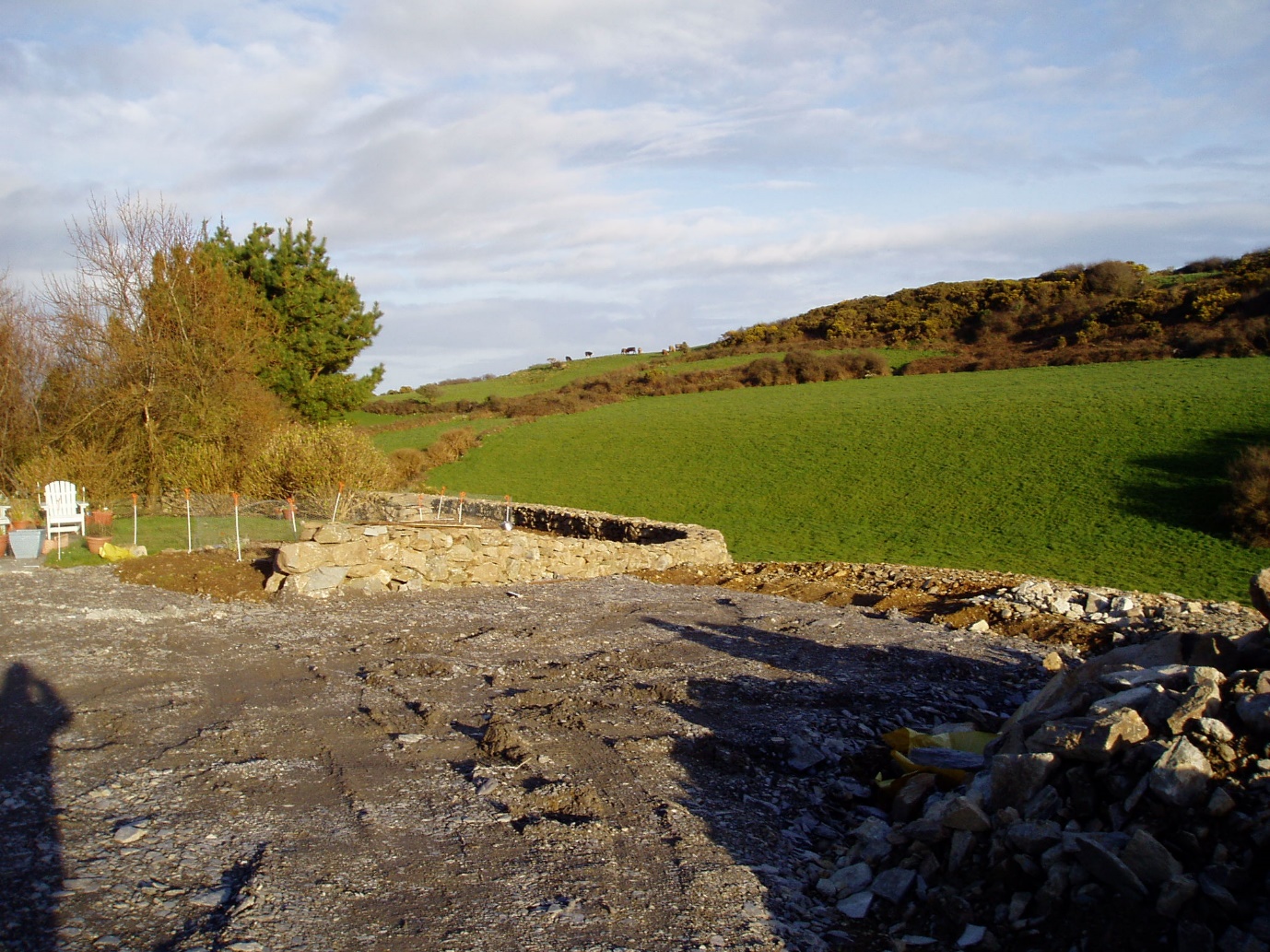 The first of the small gardens take shape, this became the herbaceous garden 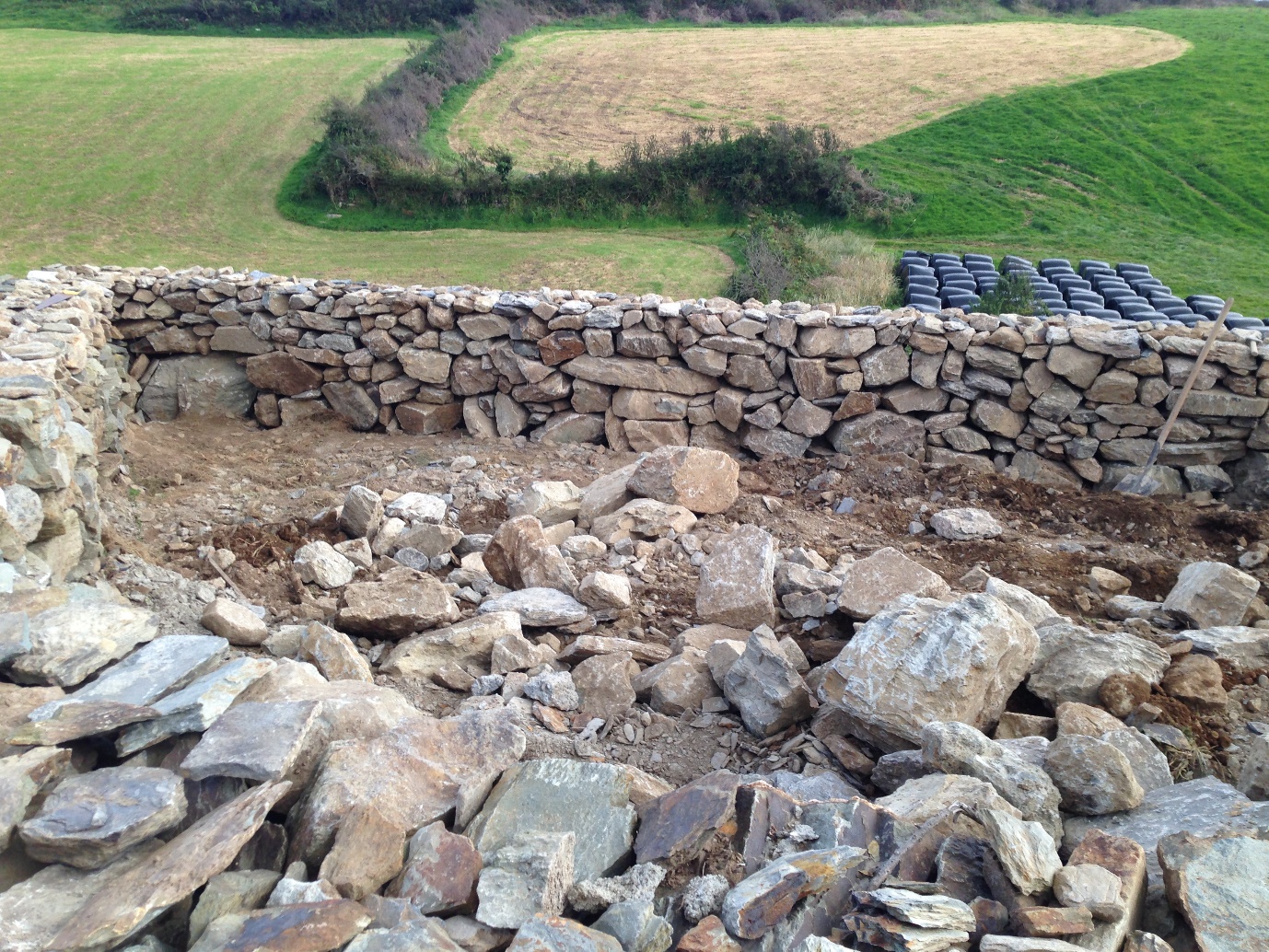 The creation of the prehistoric garden giving an idea of the work involved. Many of these stones were placed by hand with just the occasional help from a digger 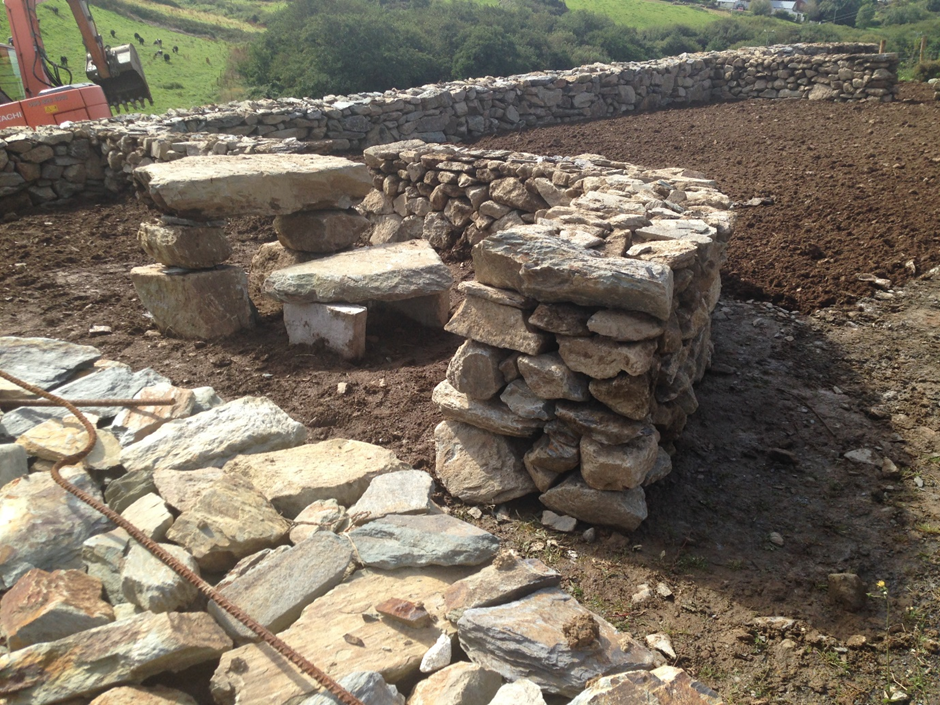 I had asked if I could have a table and seat made from some of the larger stones in the corner of the new ‘prehistoric’ garden. As you can see, the name ‘prehistoric’ is apt. The neighbouring garden has since become the fruit garden. 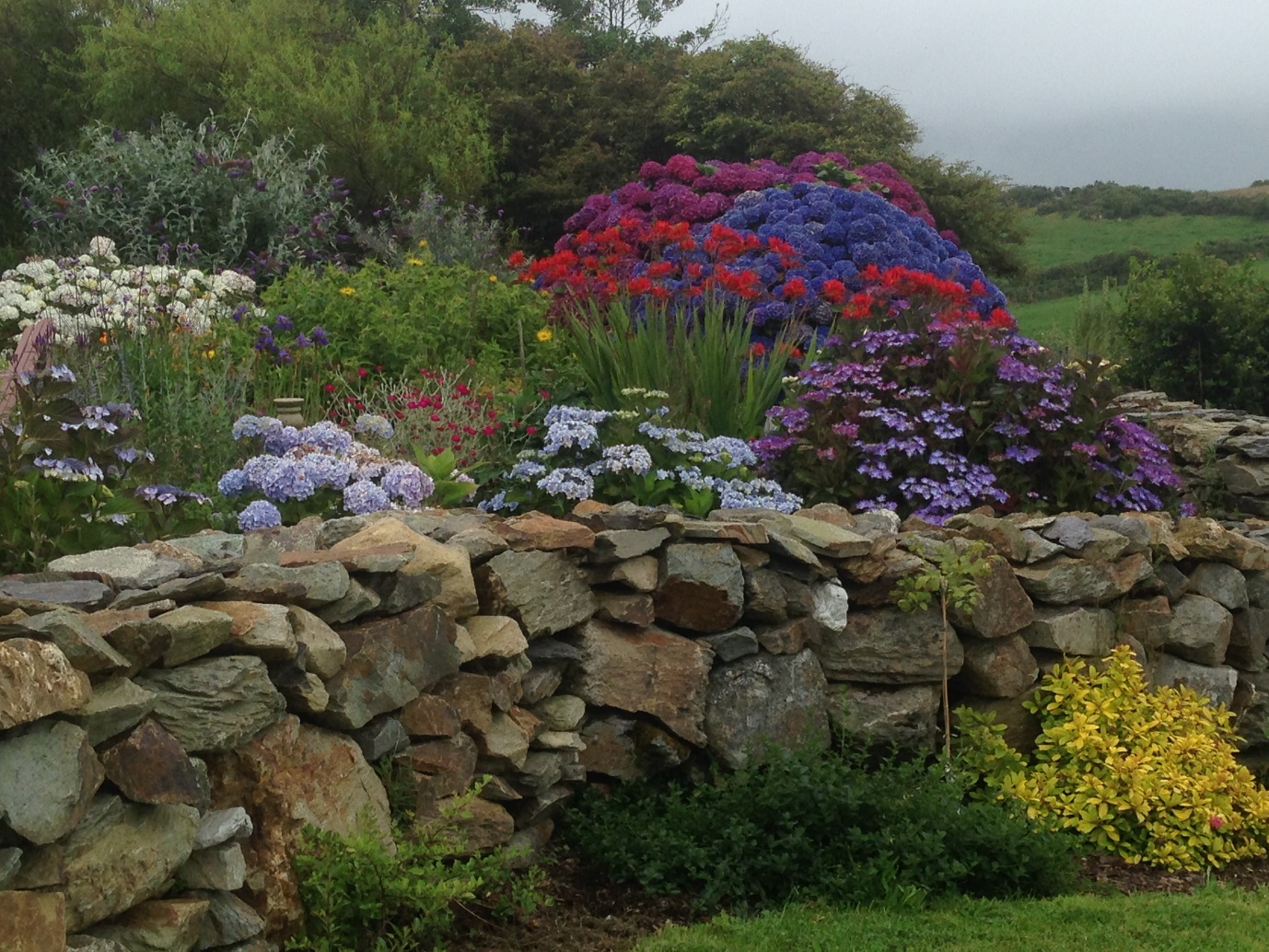 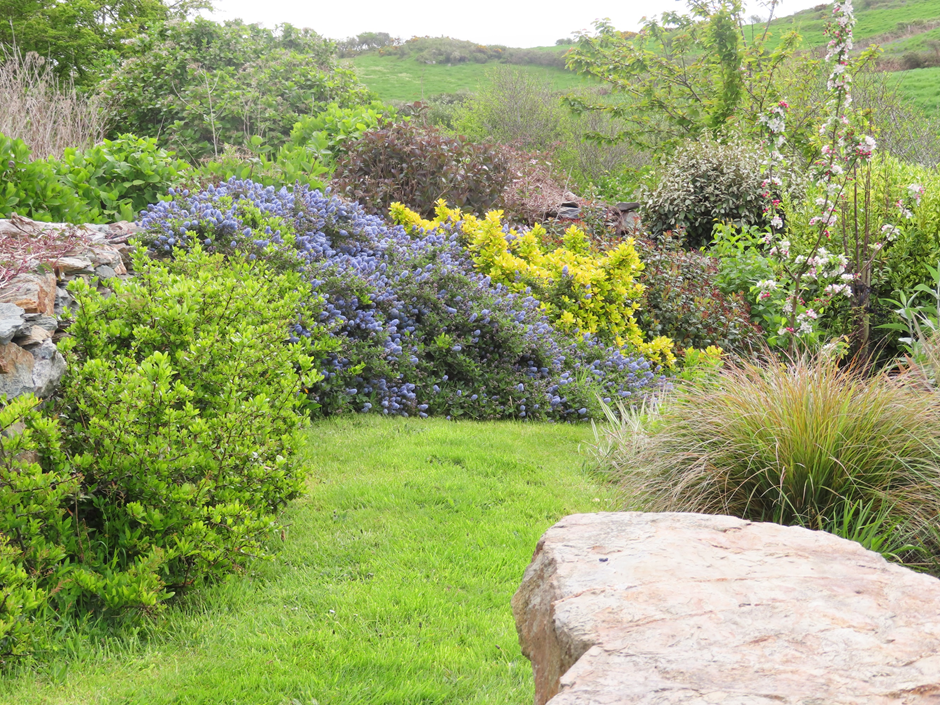 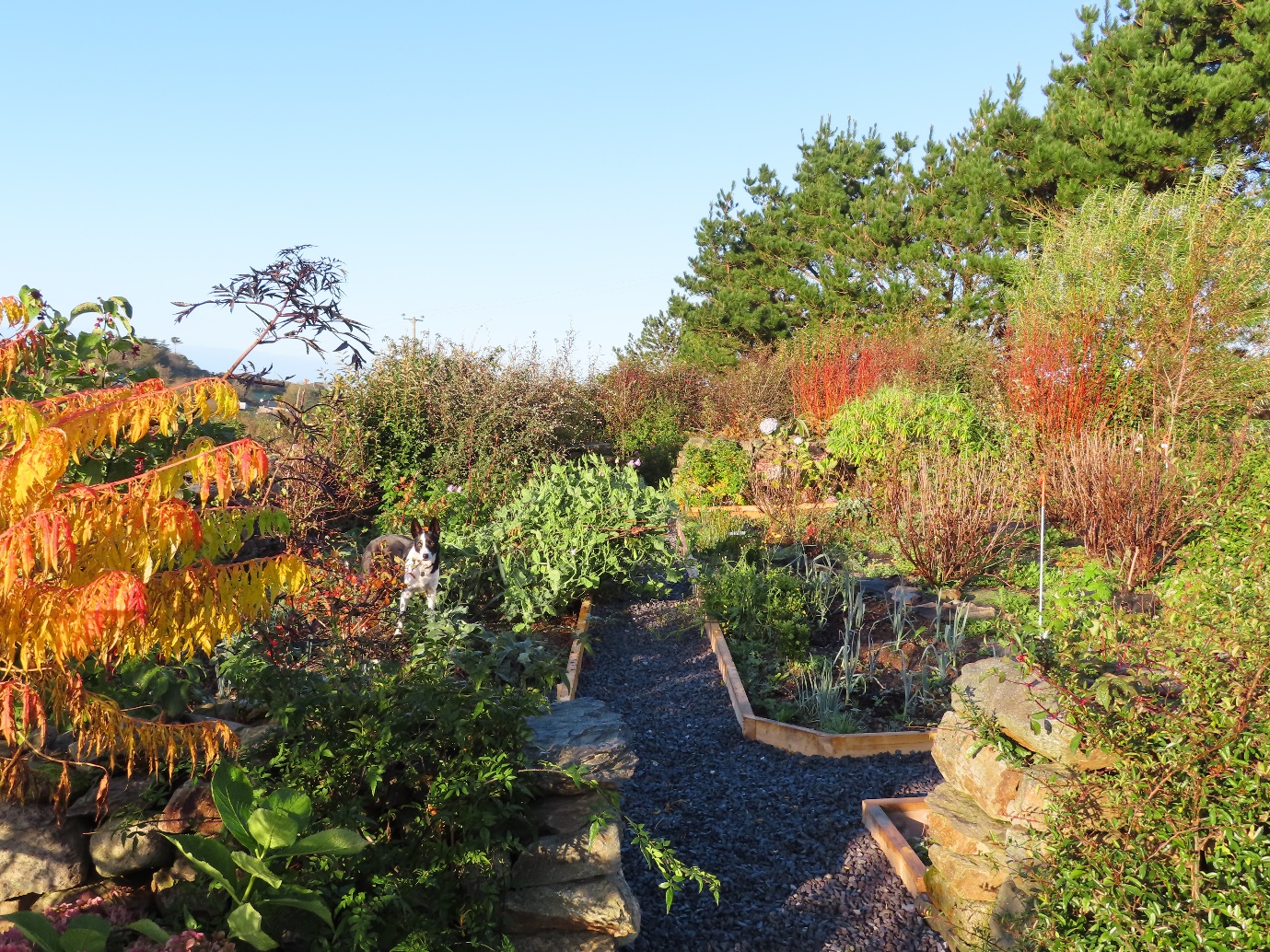 View from the ‘prehistoric’ garden to the fruit garden 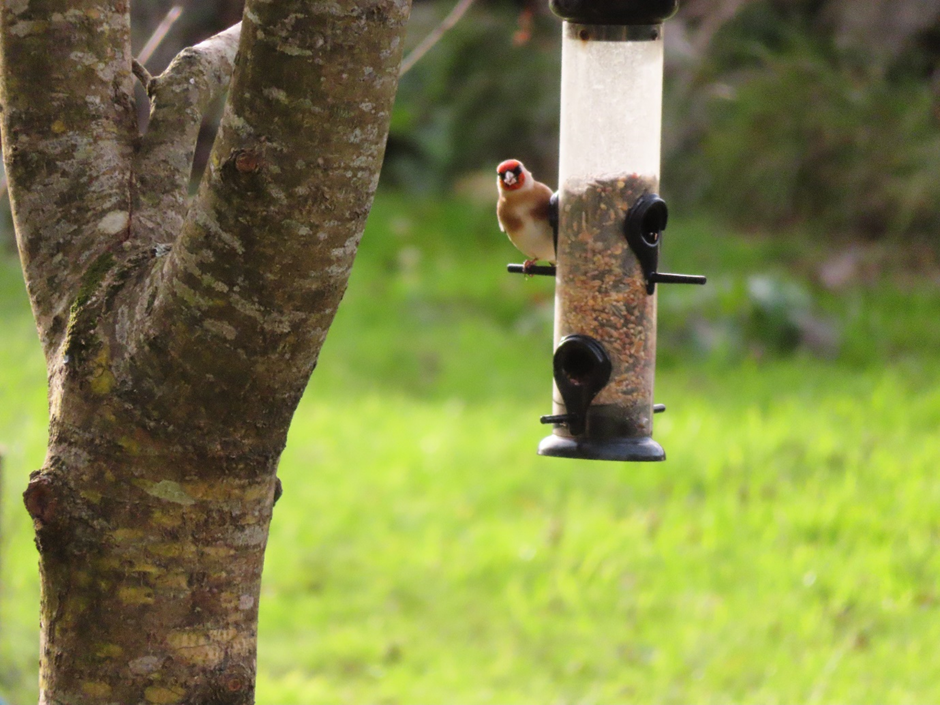 After a weekend of storms (including Aidan) and torrential rain we had our first heavy frost this morning. My ‘water feature’ was covered in ice and I do hope that the single water lily survives the cold. I have doubled the amount of bird food even though there are still plenty of berries on the hedgerows. These seem more palatable to the many blackbirds that live there. The smaller birds appreciate the extra food in the feeders and they are joined by my resident pheasants. This morning five were waiting for me as I approached the feeders. All provide hours of entertainment during the Covid -19 lockdown.