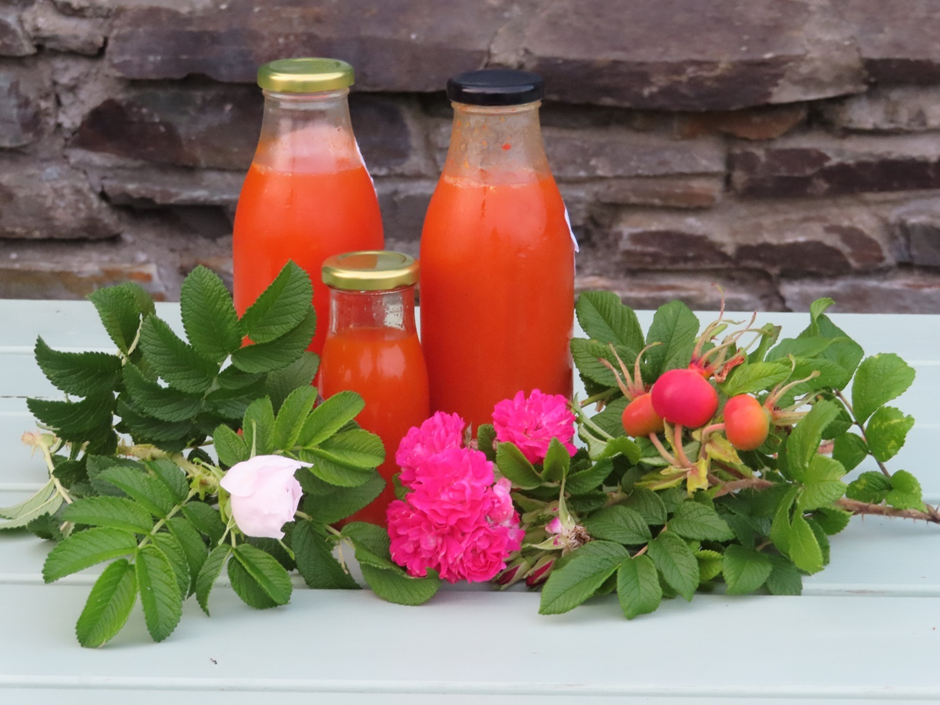 At last, I finally managed to beat the birds to one crop in the garden. The rosehips are just ready for picking for syrup. As the seeds don’t contain any vitamin C, I have gone to the trouble of removing them before making the syrup and placing them on the drystone walls around the property for the birds. I have no illusions that they will appreciate the gesture by leaving some fruit for me in return, but at least I don’t feel as if I am depriving them of a valuable food source. 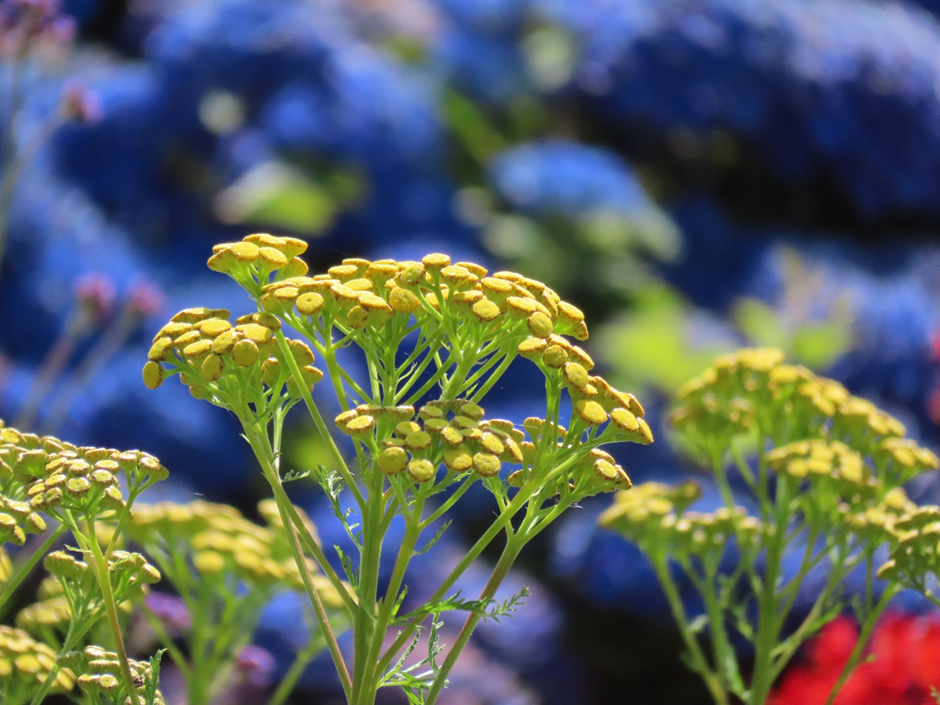 Tansy with a blue mophead hydrangea in the background

I have always loved pastel-coloured herbaceous borders, but have been thwarted in my attempts to have them in this garden. Many of my delicate-coloured plants have not lasted the winter. This may be due in part to the exposed position of the border, but the situation has not really improved since I have built up a shelter belt. I suspect the salt-laden winds from the south are partly responsible. The toughest flowers so far are also those that spread rapidly. For some reason they are also those with very strong colours. These include the Inula hookeri, Tansey, Crocosmia ‘Lucifer’ and Lychnus to name but a few. All are capable of taking over a small border unless vigorously controlled. 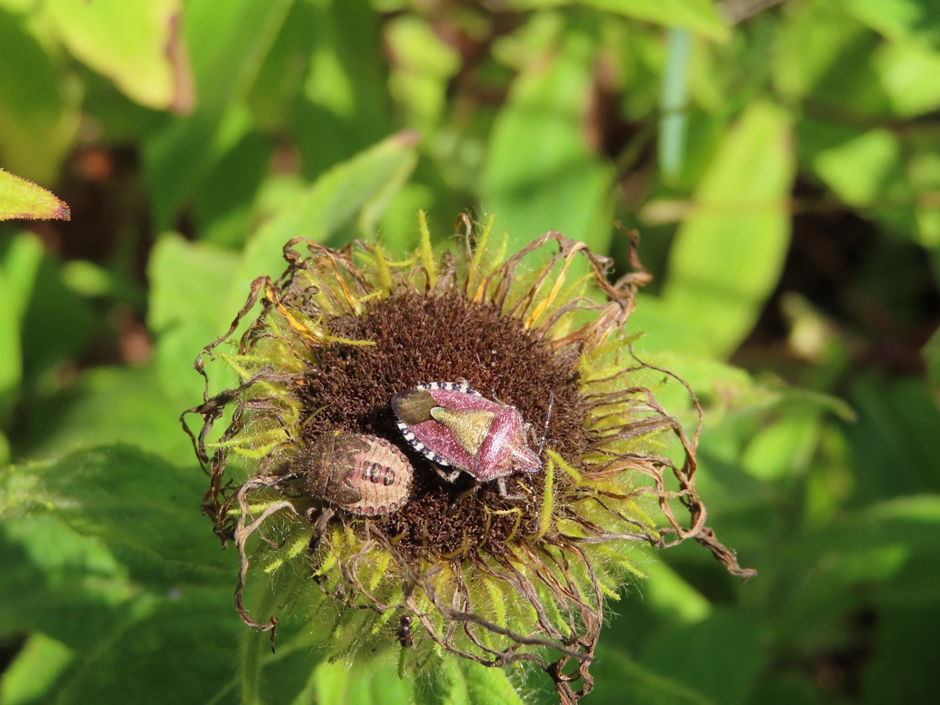 An adult Hairy Shieldbug and a Late instar nymph

The Inula hookeri continues to pay for its keep as it is now host to hundreds of Hairy Shieldbugs. The first Green Shieldbug has also arrived. These all appear to choose plants that are beginning to look rather tatty and, in previous years, they have concentrated on the Wild and Sea Carrot seed heads. The remaining flowers on the Inula are still attracting bees and butterflies, so it is a ‘must have’ plant for wild life. In addition, a gardener ‘must have’ a strong back to keep it in check. Once the seed heads have been thoroughly used, I will cut the plant back by at least a half to give the more delicate plants some space again. This is a yearly task, but the plant is too valuable to wildlife to remove it completely. 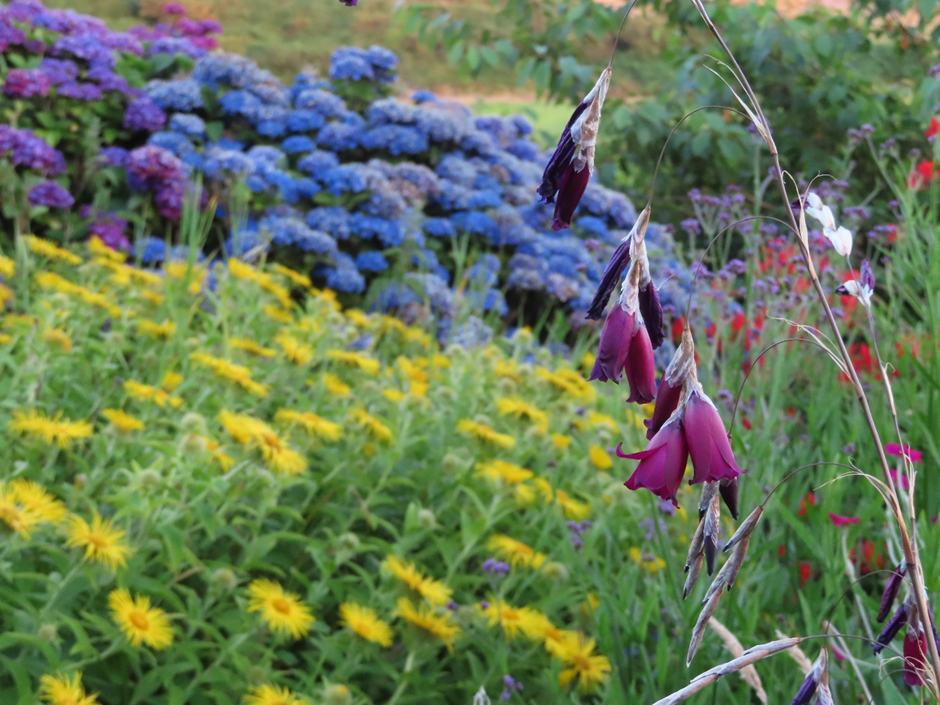 A sample of the strong colours in my ‘pastel’ herbaceous border. The yellow Inula hookeri is almost as big as the hydrangea in the background 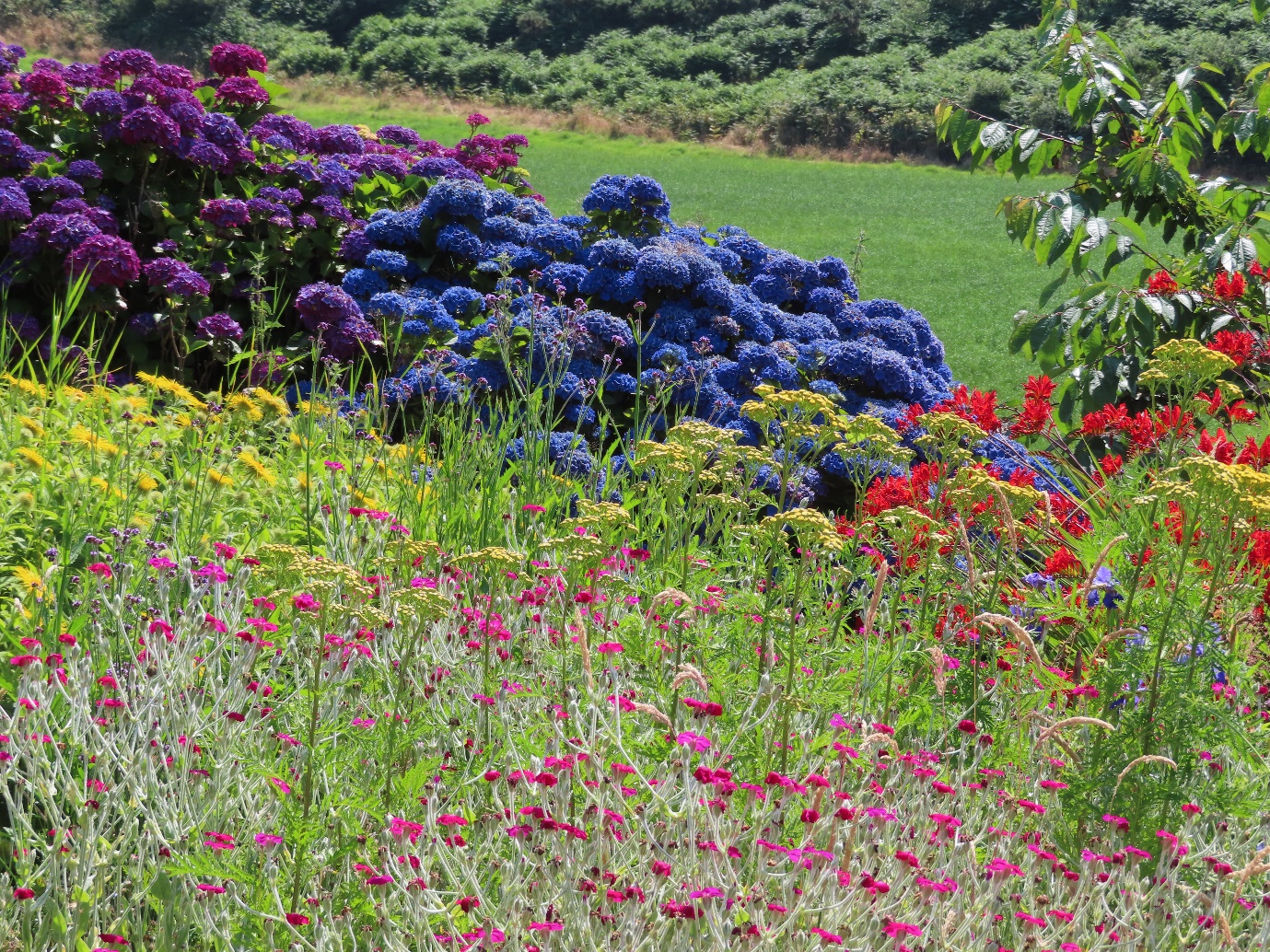 Another view of the border. This time it is the pink Lychnus that is running rampant 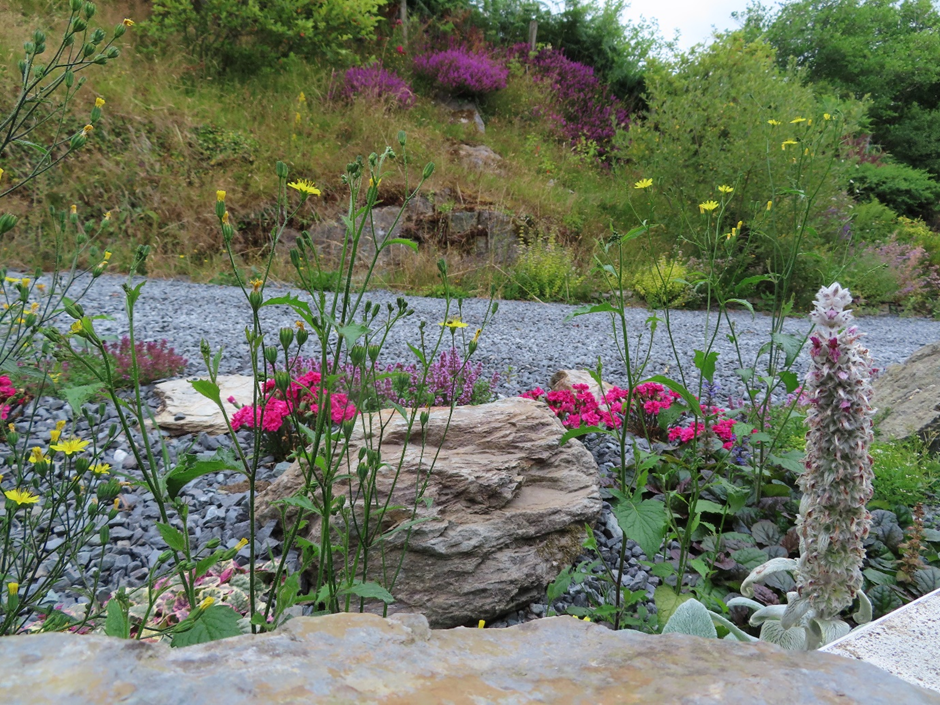 I am rather pleased with the new rock garden on the edge of the driveway. I think that it blends in with the natural rock and heather growing on the bank on the other side. I am experimenting to see what wild flowers pop up, so that I can decide whether they can be a permanent part of the planting. To date the Scarlet Pimpernel is flourishing and is not in danger of overcoming the other plants. Although tall, Nipplewort is delicate enough to blend in. At the other end of the spectrum the tiny wall speedwell Veronica arvensis below is so tiny that can hardly be seen. It is so beautiful that I will make every effort to see that it remains in the rockery. 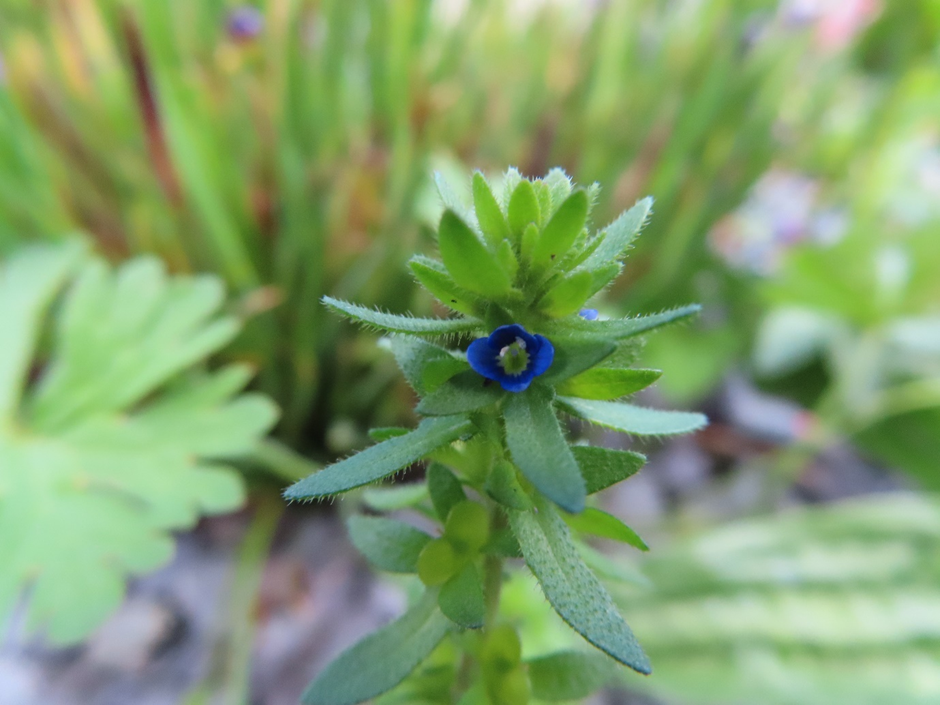 Wall Speedwell – Veronica arvensis – in the rockery. This is just a few inches tall and easy to miss. 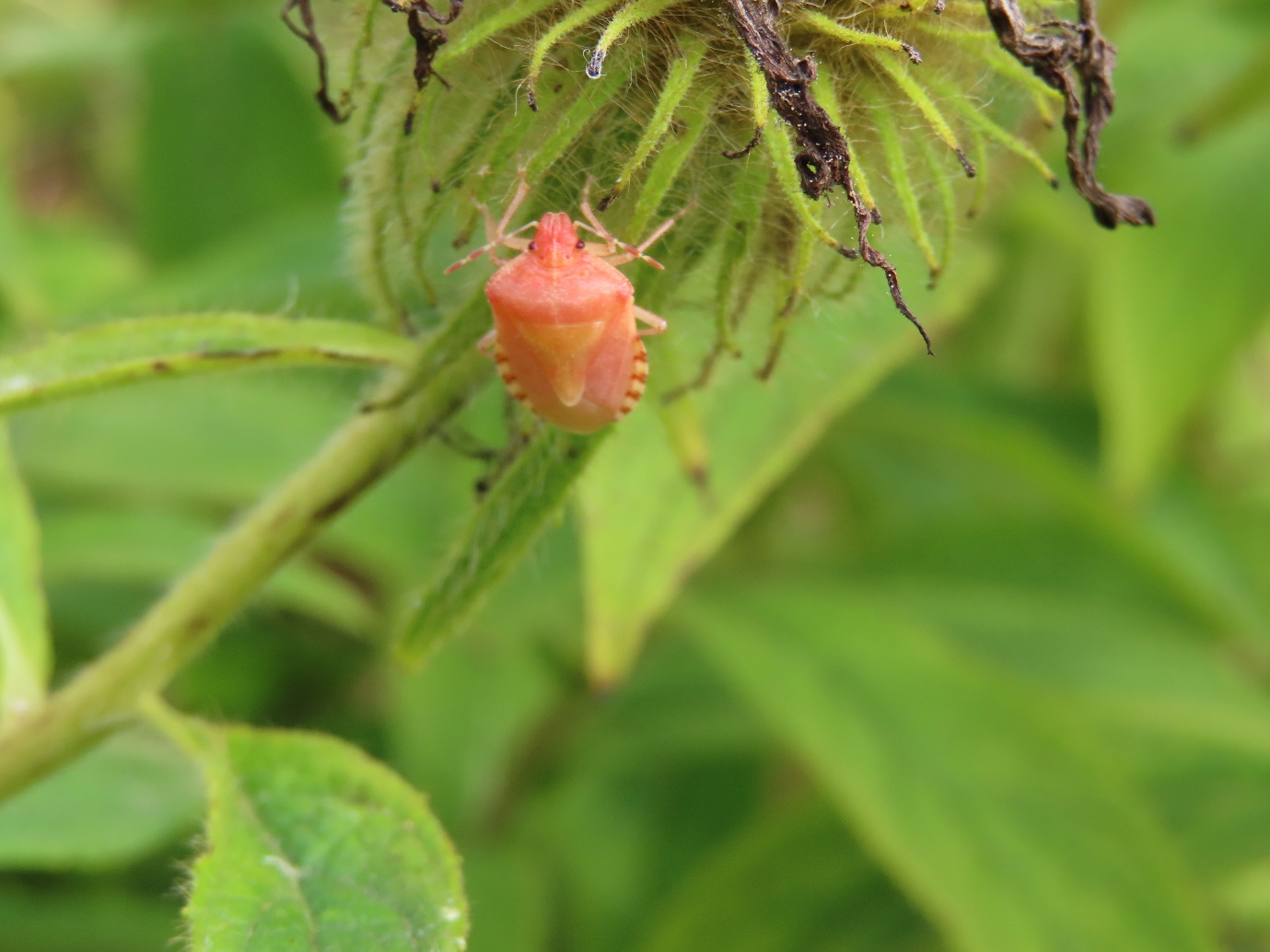 I have decided to include my dogs in the wildlife section, as they are currently doing as much damage to the garden as their undomesticated friends. This is the time of the year that the small creatures such as voles and mice start to set up their winter headquarters in the tree roots and the many dry-stone walls around the garden. I can tell because the dogs are on a massive digging spree. I have some sympathy for the tiny creatures, as I suspect they have to move to new quarters on a regular basis as the dogs follow them around the garden leaving large craters in their wake. Sadly, they don’t fill in the vacated holes once the job is done and leave that task to me. The small creatures have also taken a fancy to one of my raised beds. I discovered this when Millie and Sadie almost emptied it of soil in one digging frenzy. Now I have to find the hole that the creatures are using to access the bed so I suppose I should be grateful to the dogs for clearing it for me. 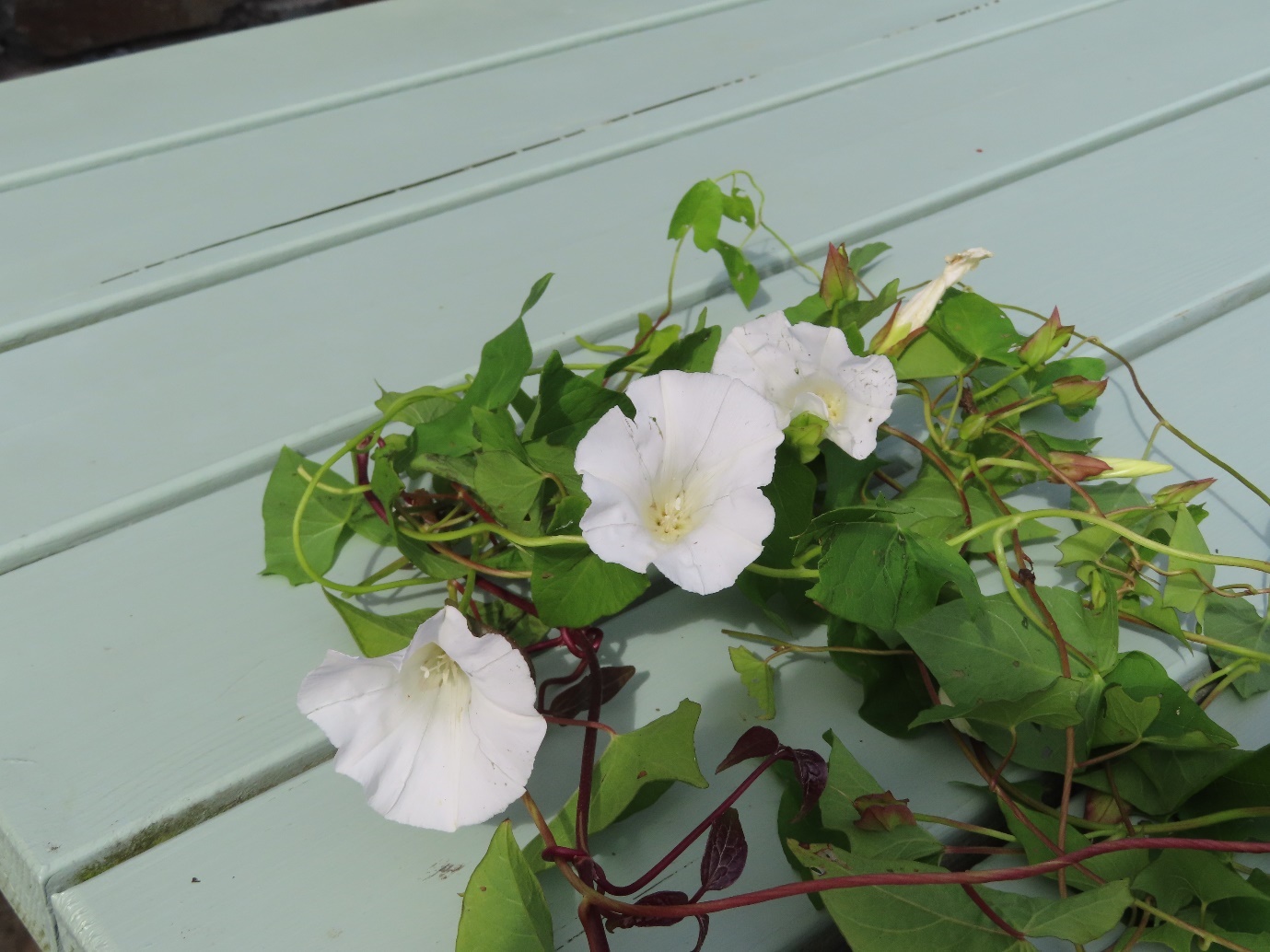 According to the reference books Hedge Bindweed occurs in hedgerows and ‘untended’ gardens. I find this rather insulting as I spend half of my life ‘tending’ the garden trying to get rid of it. But it is rampant in the surrounding area, so I can only hope to keep it under some kind of control. Usually, I manage to uproot it before it flowers but these caught me unawares. 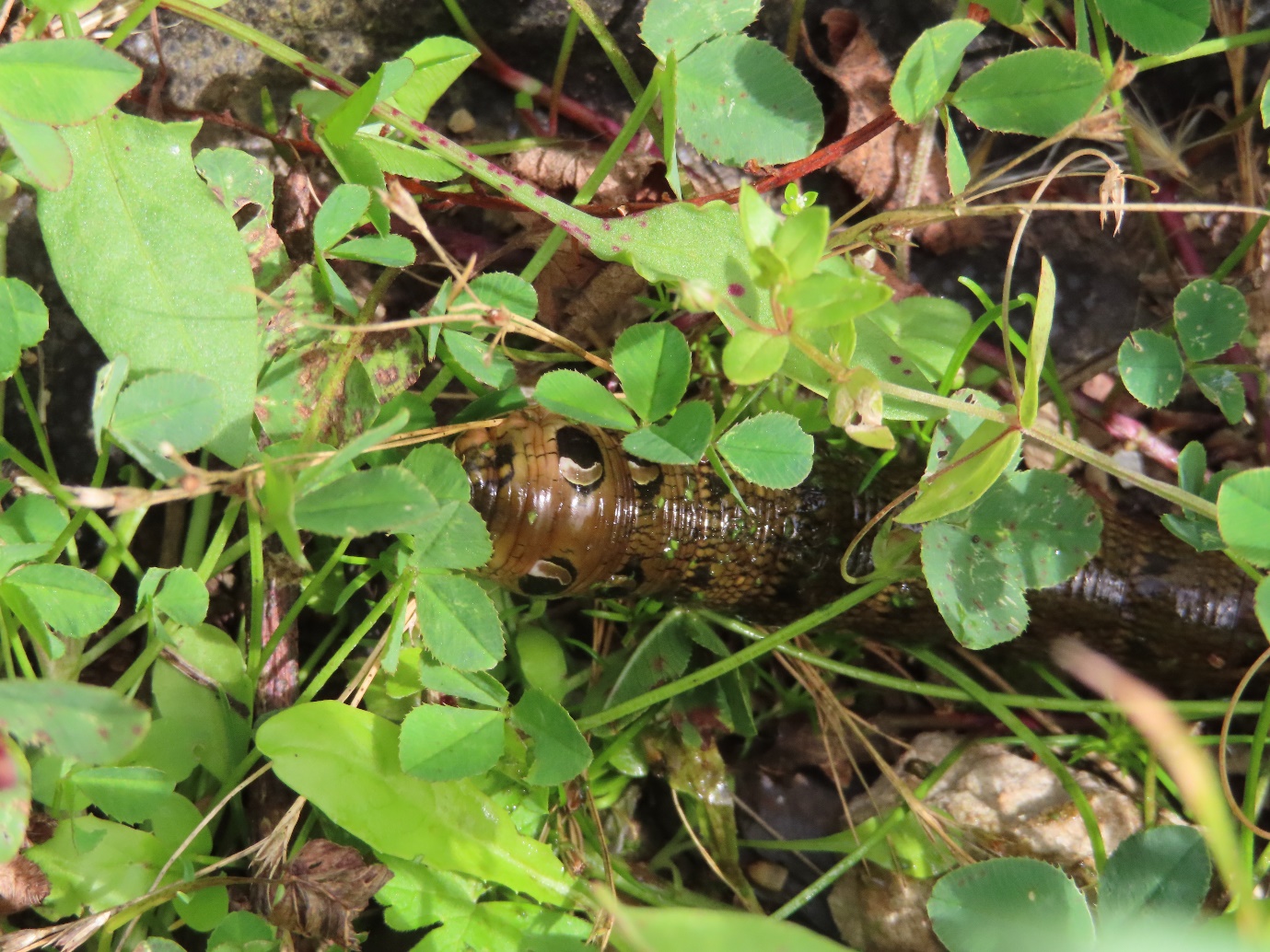 This Elephant Hawk caterpillar always impresses me with its dramatic appearance and large ‘eyes’. I have never seen the adult moth but the caterpillars appear in the garden each summer so they must be around somewhere. Apparently, they eat Willowherb, Fuchsia and Bedstraw plants – all of which are available throughout the garden. It is a good thing that I have resisted the urge to ‘weed’ the area of the garden where the Willowherb flourish. 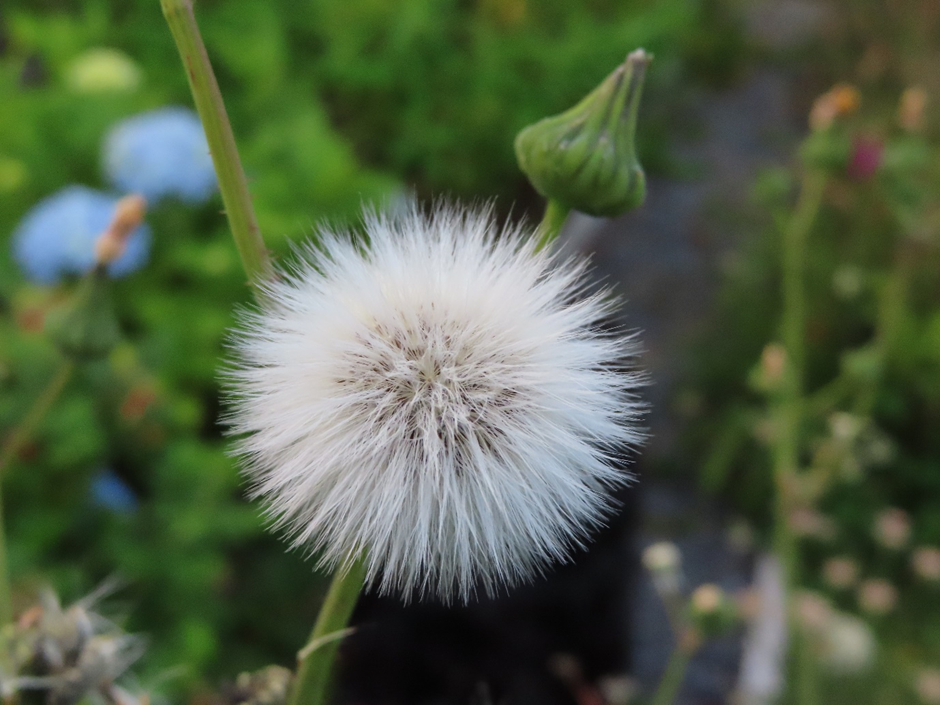 The delicate seed head of a Smooth Sowthistle 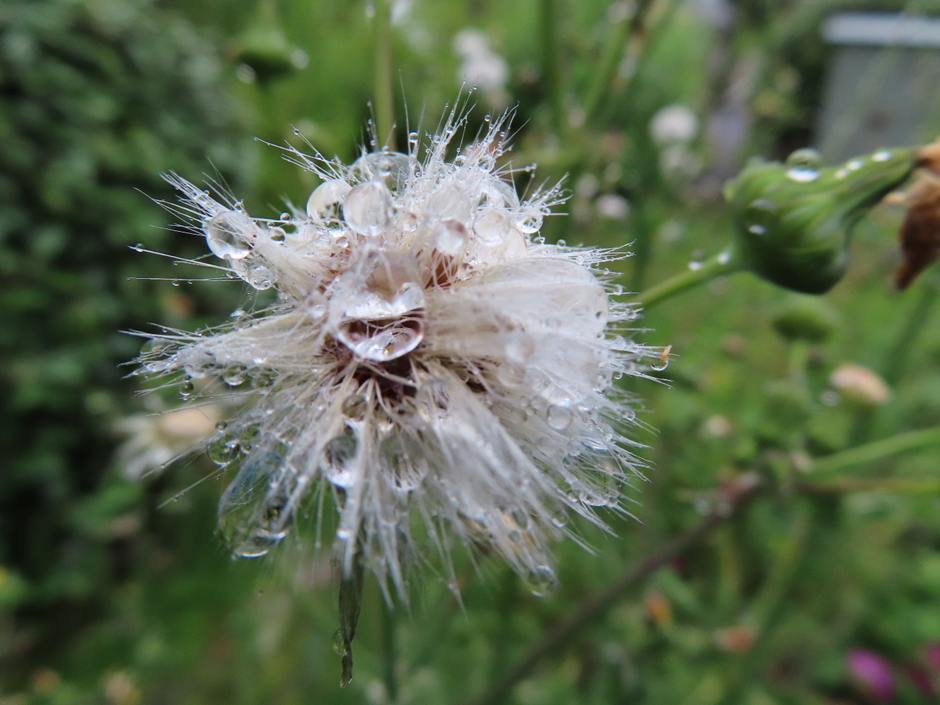 Caught without an umbrella! 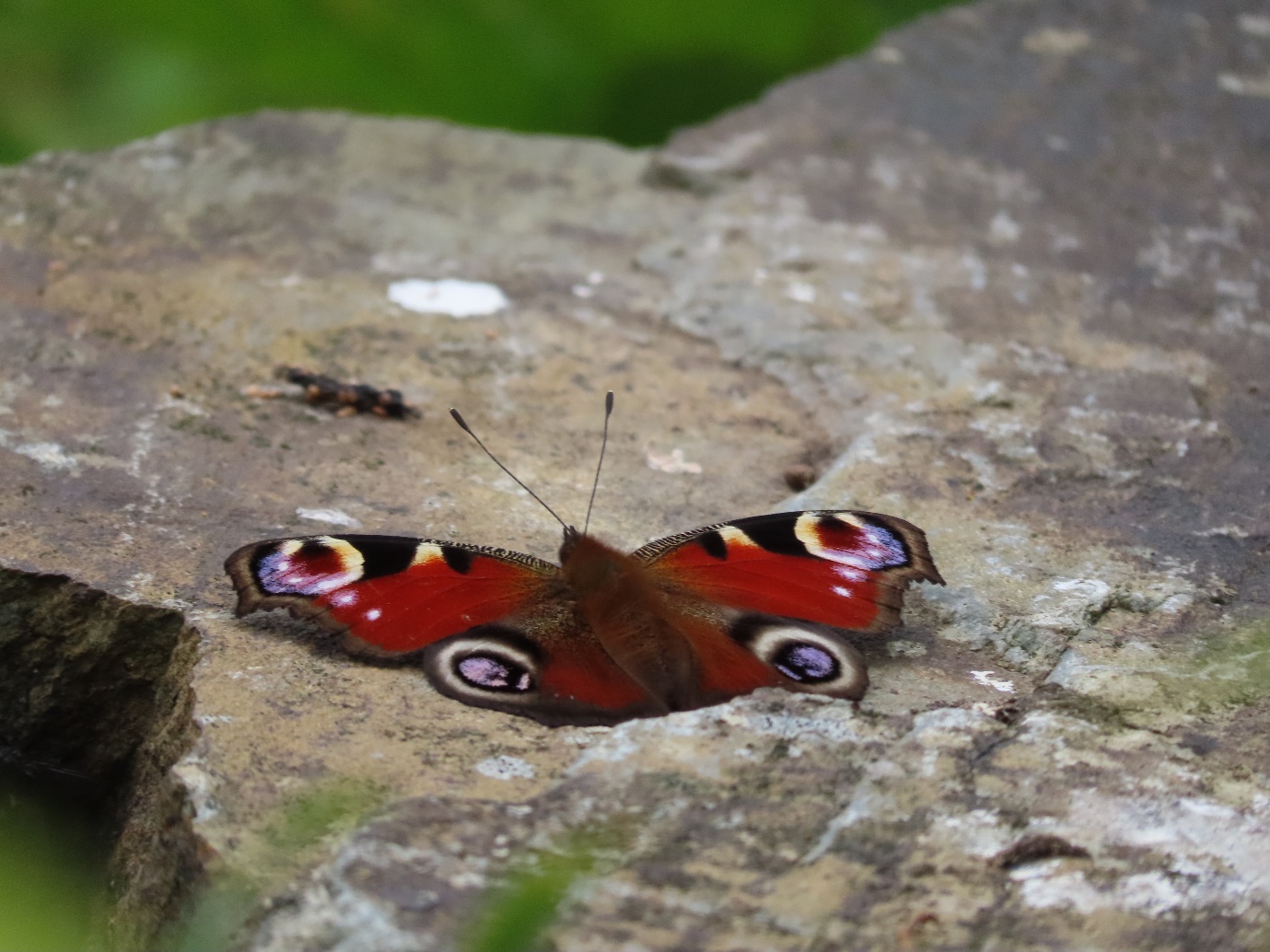 At long last the butterflies have arrived in their droves. I have tended to look for them in the Buddleia bushes and other shrubs that they love. I have now discovered that they also love the dry-stone walls where they sun themselves on the warm, flat stones. 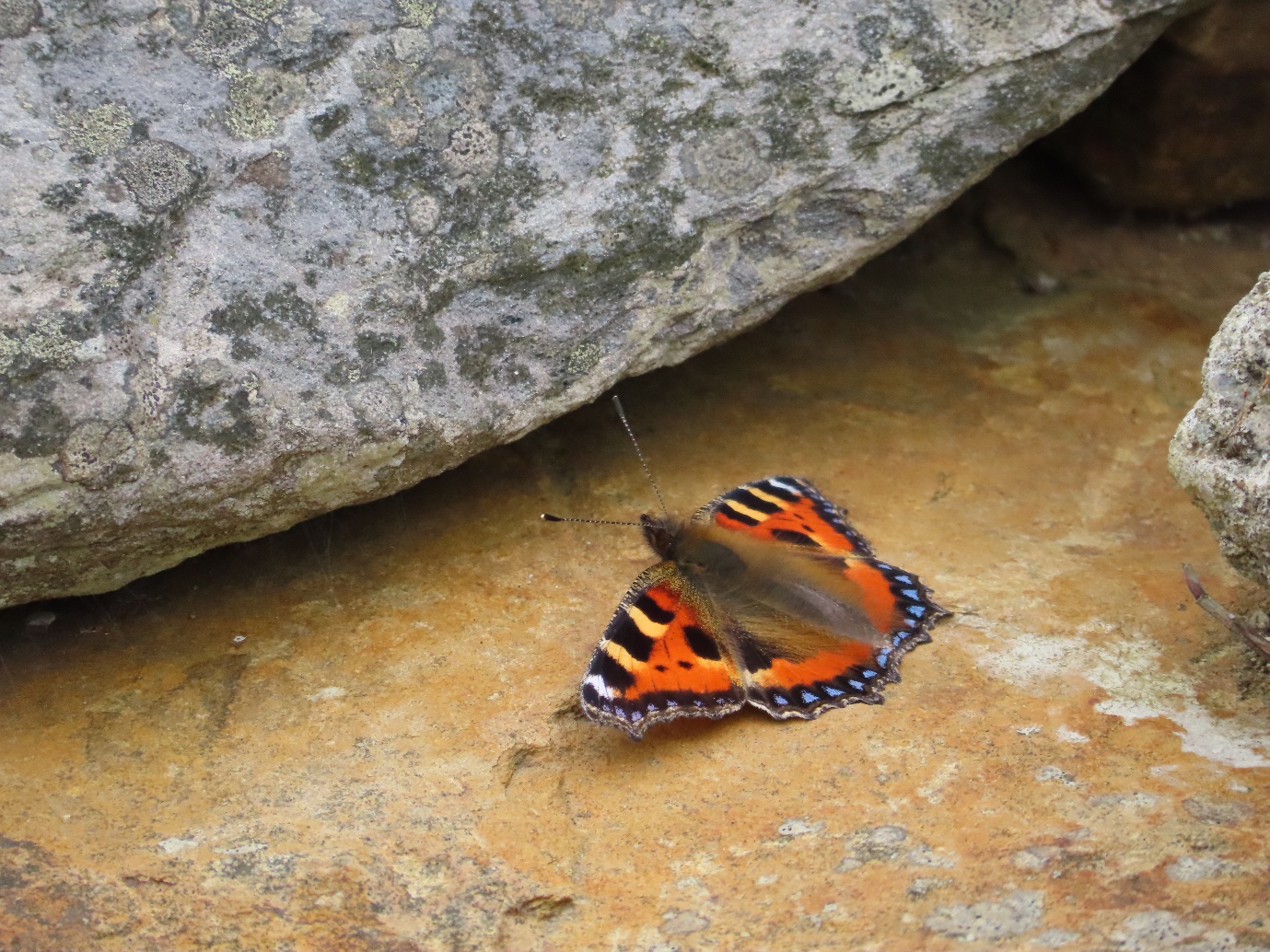 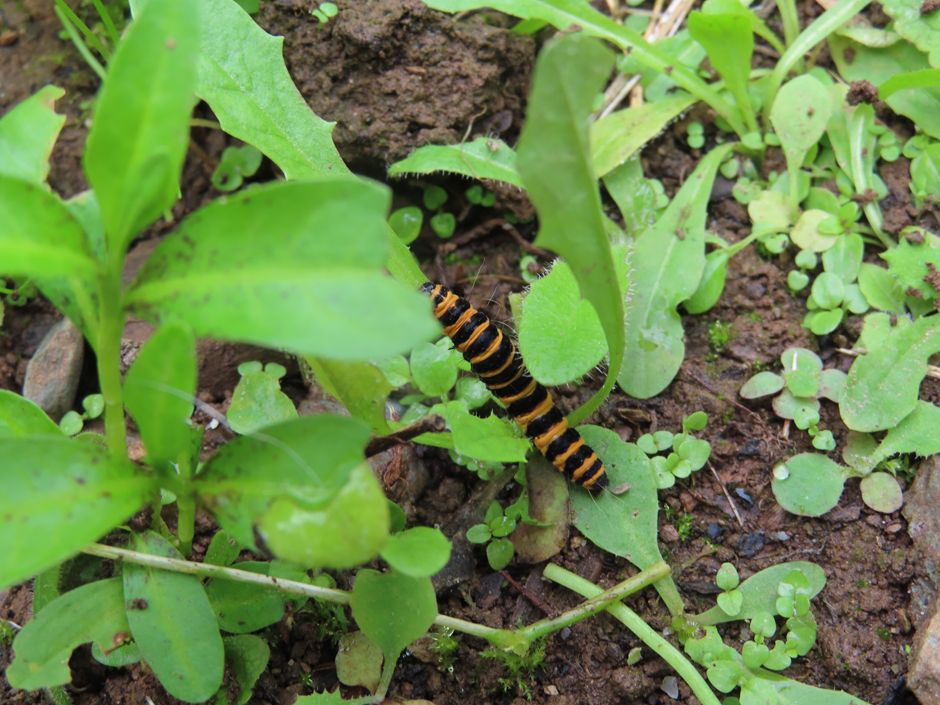 It has been a delight to see so many butterflies, bees and bugs around the garden this week. I was becoming concerned as it felt as if they were very late to arrive this year and the weather has been very unusual. Sadly, I have found just one Cinnabar Moth caterpillar so far and none on the Ragwort which is their usual host. In previous years they have appeared in early August when the buds have not yet opened and the flowers are now withering. The sight of the little creature above gives me some optimism that it has companions somewhere in the garden.